The most significant aspect of this temple is the Vinayakar – also called “Polla Pillaiyar”.  Polla Pillaiyar means that this idol is not chiselled but has appeared on its own as “Swayambu”. He is very popular and regarded as the most powerful deity here. 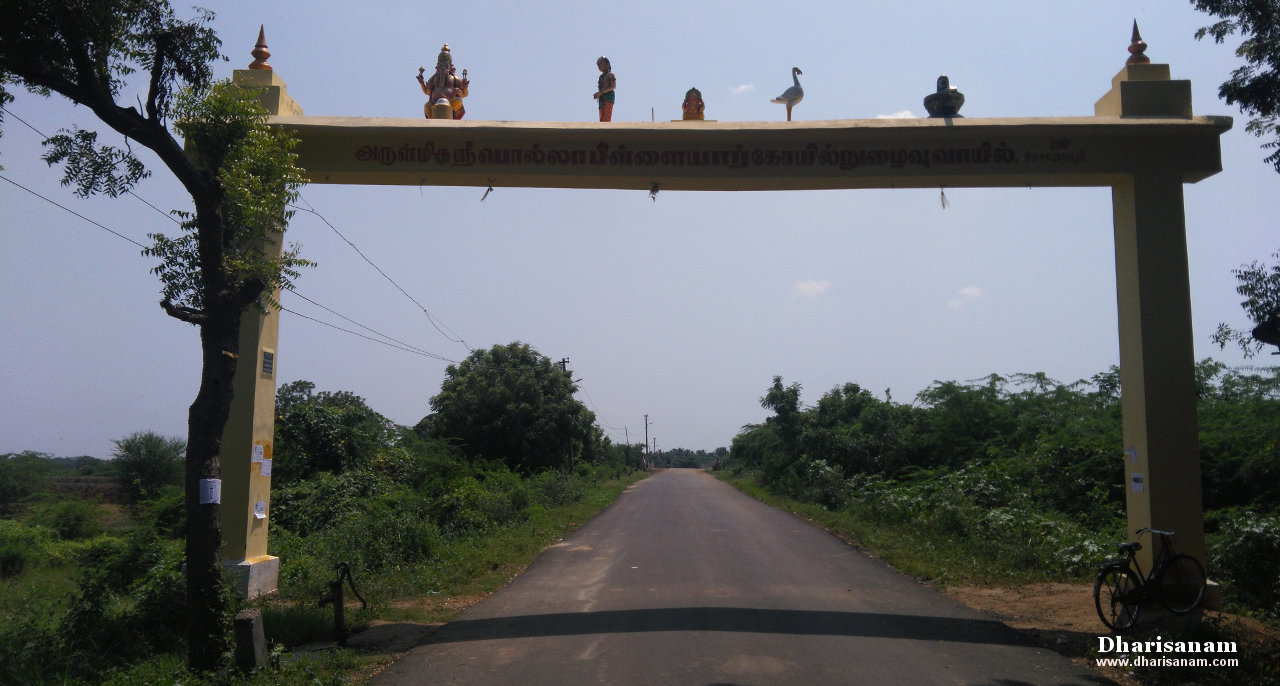 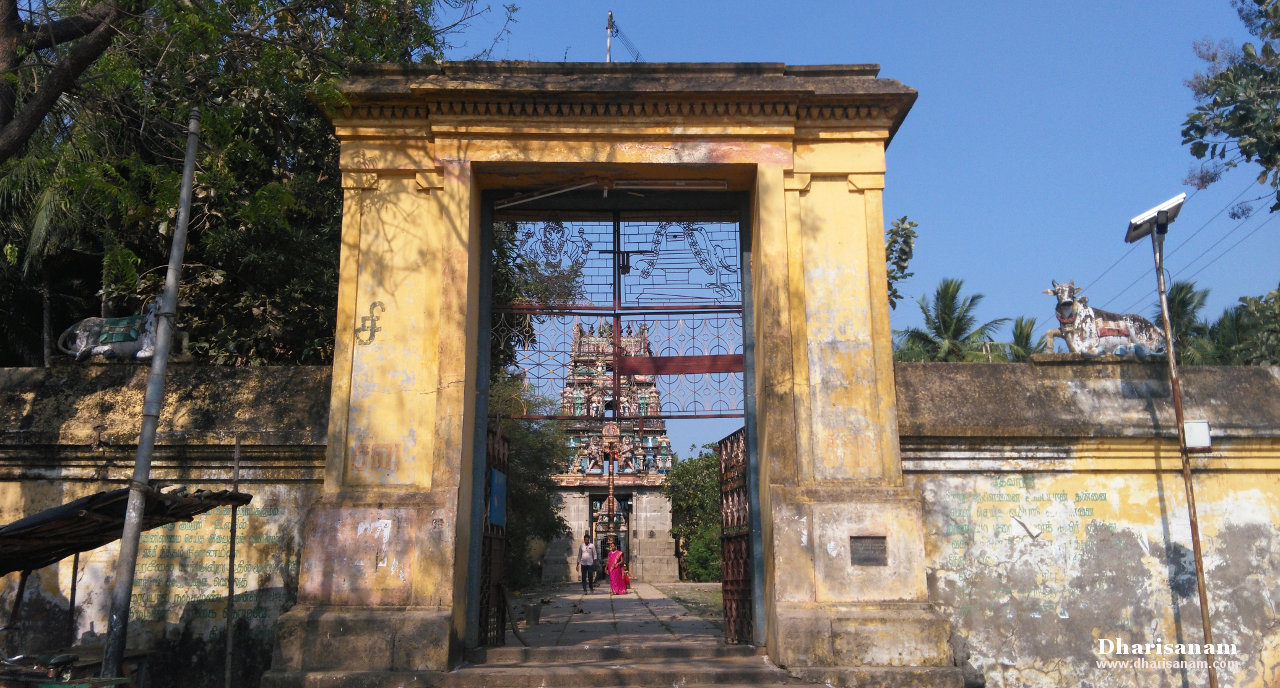 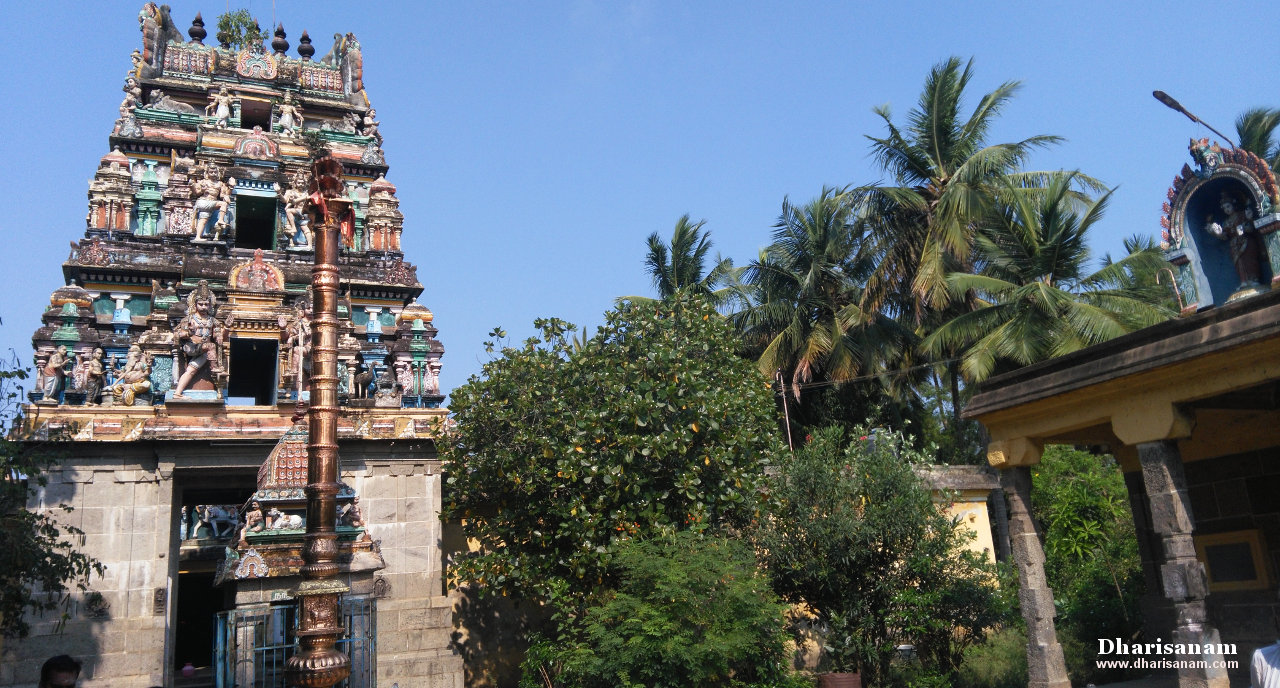 The legend associated with this temple is that of Sage Durvasa. The sage wanted to seek the darshan of Lord Shiva and was performing rigorous penance. His penance was disturbed by a Gandharva (dancers and singers from the celestial world). Sage Durvasa cursed the Gandharva that he would turn into a crane (Naarai bird). When he begged for forgiveness, the sage advised him to come to this place (Naraiyur) and worship the lord every day with water from the Ganges in Banaras to get relieved from this curse.

As a bird, the Gandharva flew to Varanasi (Kasi) every day as fast as he could, fetched water from the Ganges in his beak and performed abishekam. One day there was a heavy storm and he could not continue his journey against the direction of the winds. Despite all the hardships, the bird laboured on. Slowly, he lost all is feathers and started falling down. Some of the water that he was carrying for the abishekam also fell from his mouth. Lord Shiva was very pleased with his devotion and blessed him with salvation (“mukthi”). Hence this place gets the name Naraiyur and this temple is considered to be a “Mukthi Sthalam”. The place where the water fell turned into a pond and it is now known as “Karunya Theertham”. The place where the feathers fell is known as “Sirakizhantha Nallur” (“siraku” means wing and “vizhuntha” means “to fall” in Tamil). This village is about 3 kms away from this temple.

Another legend associated with this temple is that of Nambiyandar Nambi and Chola King Rajarajan (985-1014 AD). Nambiyandar Nambi was born in Thirunaaraiyur and his father Ananthesar was the temple priest. At a young age, Nambiyandar was well versed in the Vedas and agamas.  As a young boy, he used to watch his father perform poojas in the temple. One day, when his father returned from the temple, he asked his father where the offering (nivedhanam) was. His father replied that the Vinayakar (Pollap Pillaiyar) had eaten it as usual. He had said this only in jest and the nivedhanam was distributed among the devotees.

One day, when his father had gone to a nearby village, Nambi was asked to perform poojas in the temple.  After completing the regular poojas in the temple, he offered the nivedhanam to the Vinayakar and asked him to eat. However, there was no response from Lord Vinayakar idol. Nambi was worried that he had committed some mistakes in the poojas because of which the lord had refused the offering. He repeatedly requested the lord to eat the offerings. He started weeping and punishing himself by bashing his own head on the foot of the idol. Pleased with the sincere devotion of the child, Vinayakar came down to that shrine and stopped Nambi hurting himself. He also ate the offering. When Nambi told this story to his parents, they didn’t believe him. Next day, his parents hid themselves in the shrine and watched in bewilderment as Lord Vinayakar started eating the offering.

The story of this miracle spread all across the nation. When King Rajaraja Cholan came to know about this miracle, he refused to believe it and decide to come to this place. The King came with some offerings and asked Nambi to offer it to the Pillaiyar. Initially, the lord did not take the offering. Nambi became worried and rendered his hymn which later came to be known as “Irattai Mani Malai”. Pleased with his hymn, Vinayakar consumed the offerings in the presence of the gathering which included the king.

The King then bowed before the child and requested him to seek information about the whereabouts of the Devara hymns. On Nambi’s request, Polla Pillaiyar, by way of a divine voice, said that the hymns were kept in a room in the Chidambaram Natarajar temple. The divine voice also informed him that on the door, there would be a symbol of “hand”. Hence this Vinayakar is also praised as “Thirumurai Kattiya Vinayakar” (the lord who revealed the Thirumurais).

The king took Nambi to Thillai Natarajar Temple at Chidambaram in search of the hymns written on the palm leaves. They found it in the room but most of them had been destroyed by termites.

Though the local Dikshithars from Chidambaram temple opposed this mission, the king intervened and helped Nambi procure these scripts and complete his task of compiling and arranging them. The king also assigned a few scholars to assist Nambi.

However, what could be recovered later was not even 10% of the total pathigams. The number of pathigams that were recovered are - Thirugnanasambanthar (383 pathigams), Thirunavukkarasar (313 pathigams) and Sundharar (100 pathigams) only. Nambi was saddened by the loss of so many pathigams. At that time, the divine voice was heard stating that whatever was essential had been recovered and instructed everyone to be content with it.

Nambi’s “Irattai Mani Malai” hymn, available in the 11th Thirumurai, is considered very auspicious. It is sung before the Polla Pillaiyar here at every “Sankatahara Chuthurthi” festival.

In Saint Sundarar’s “Thiruthondar Thogai”, the names of the 63 Nayanmars have been mentioned. Nambiyandar Nambi has written a brief history of each of the 63 Nayanmars. Saint Sekkizhar’s “Periya Puranam” (also called “Thiruthondar Puranam”) builds on the base provided by Nambi’s work. Nambi is also one of the authors of the 11th Thirumurai of the “Panniru Thirumurai”.

The whole Saivite world is indebted to these great people – King Rajaraja Chola and Nambiyandar Nambi – for recovering these priceless hymns, which would otherwise have never seen the light of the day.

There is a separate shrine for Polla Pillayaar. Idols of Nambiyandar Nambi and King Rajaraja Cholan can be seen in this shrine.

In the “koshtam” (place surrounding the sanctum sanctorum), idols of Dakshinamurthy, Annamalayar, Brahma, Durgai and Chandikeswarar (2) can be seen. 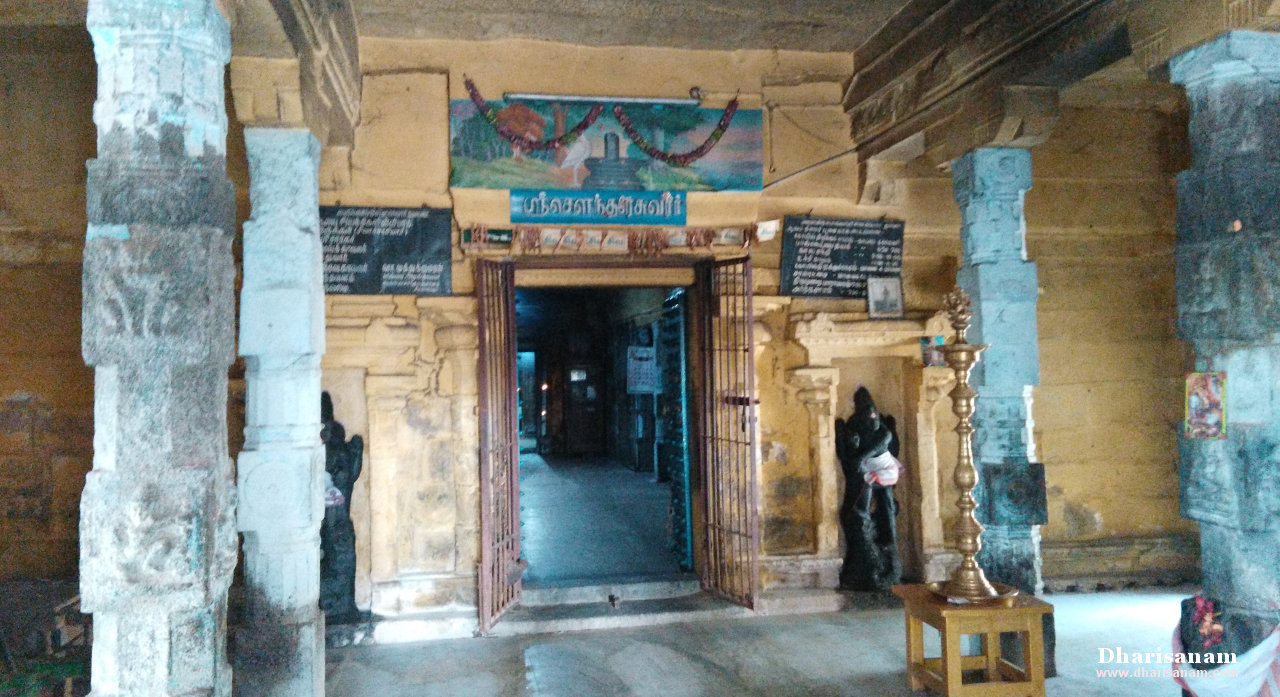 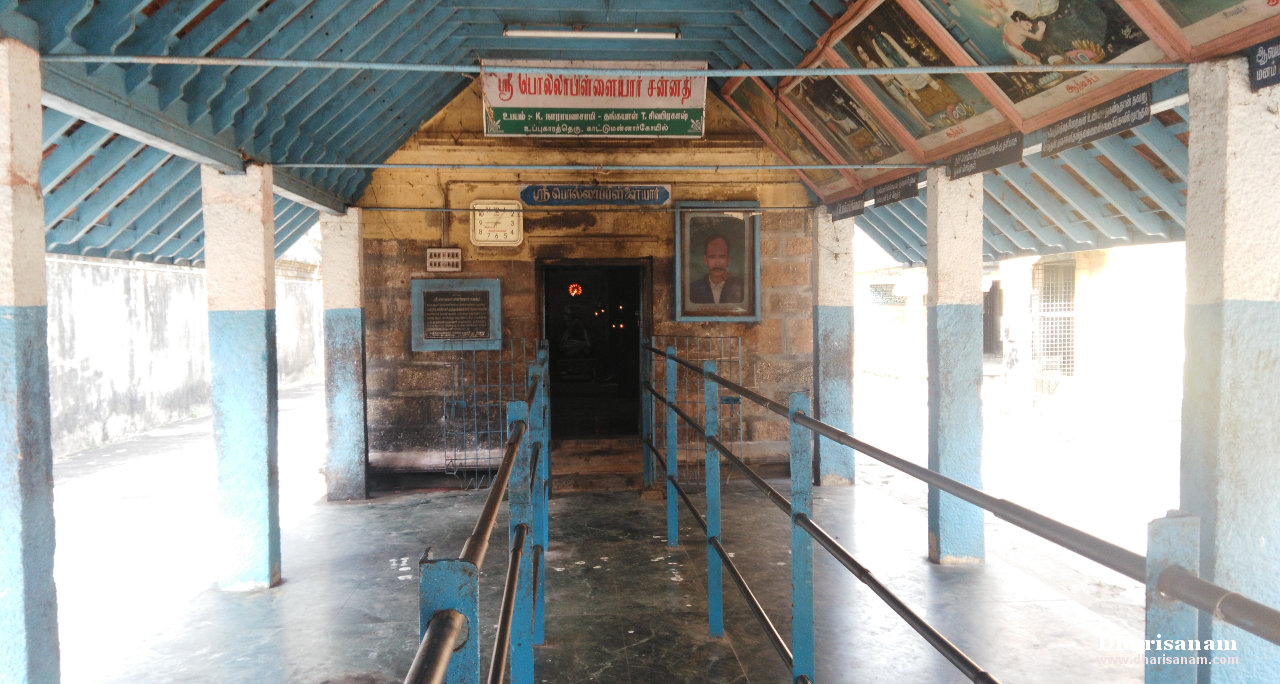 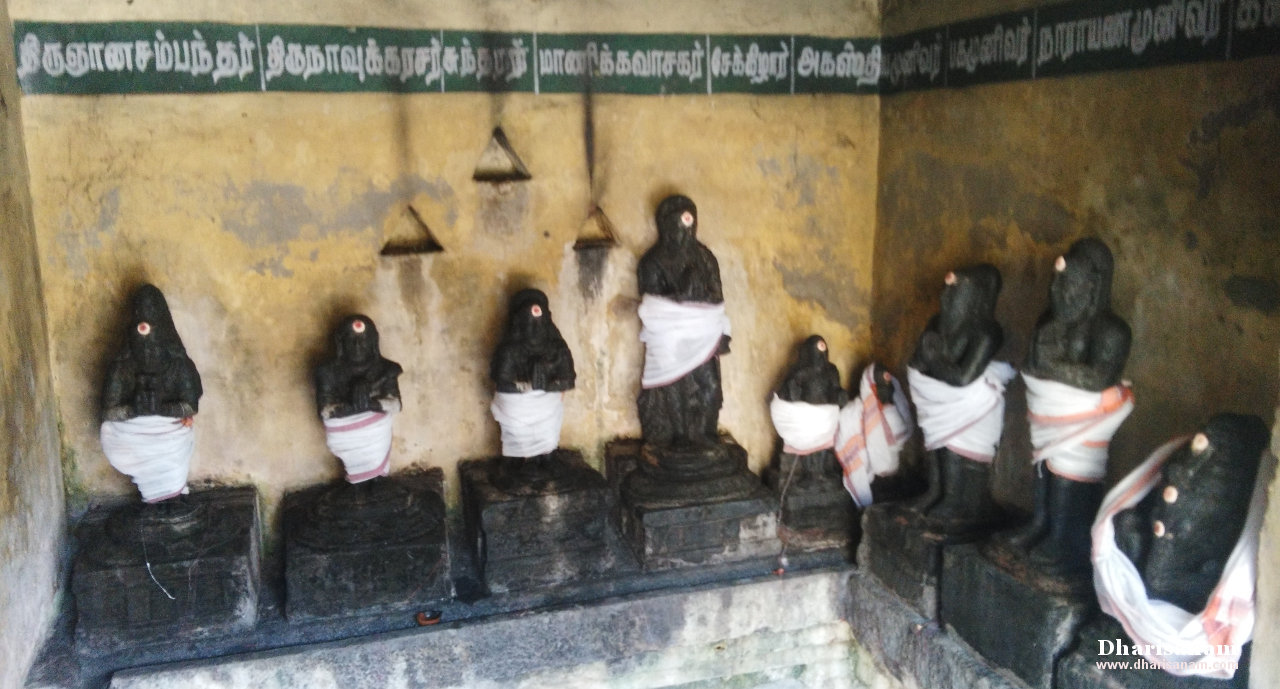 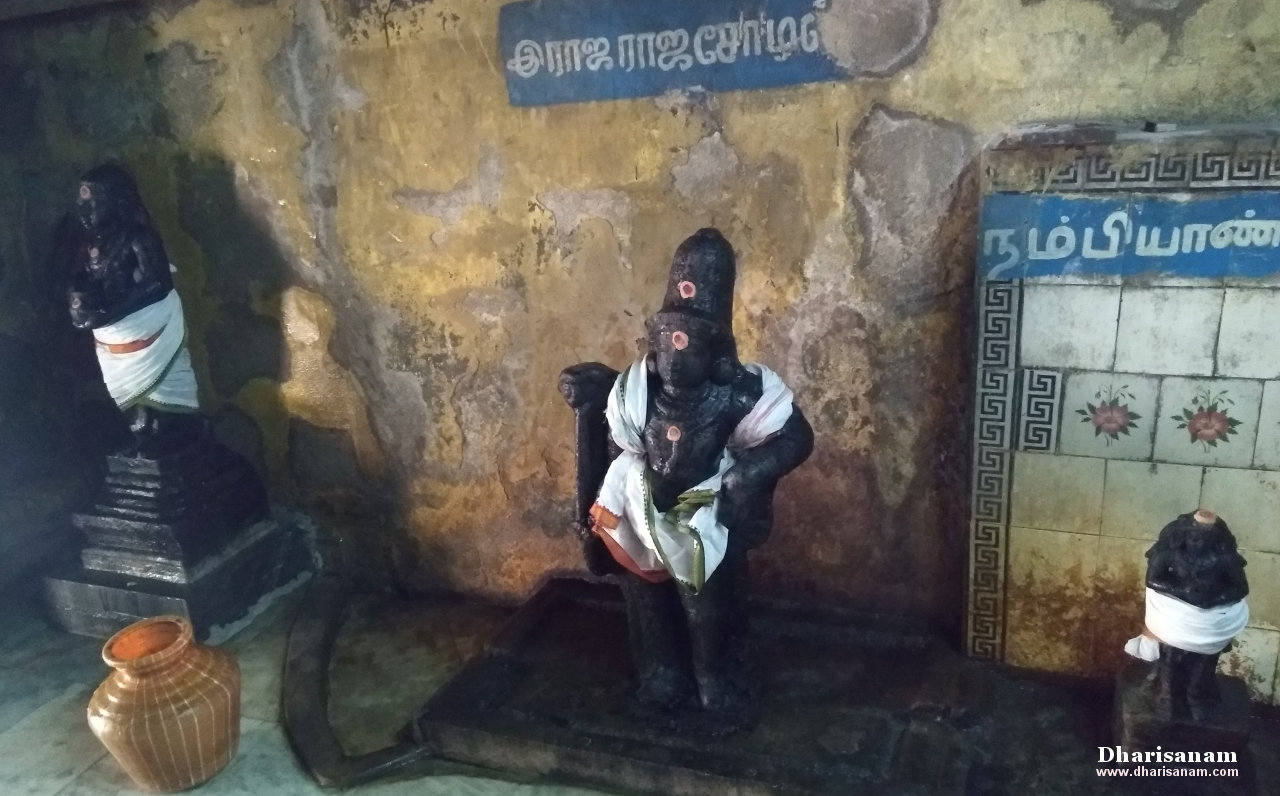 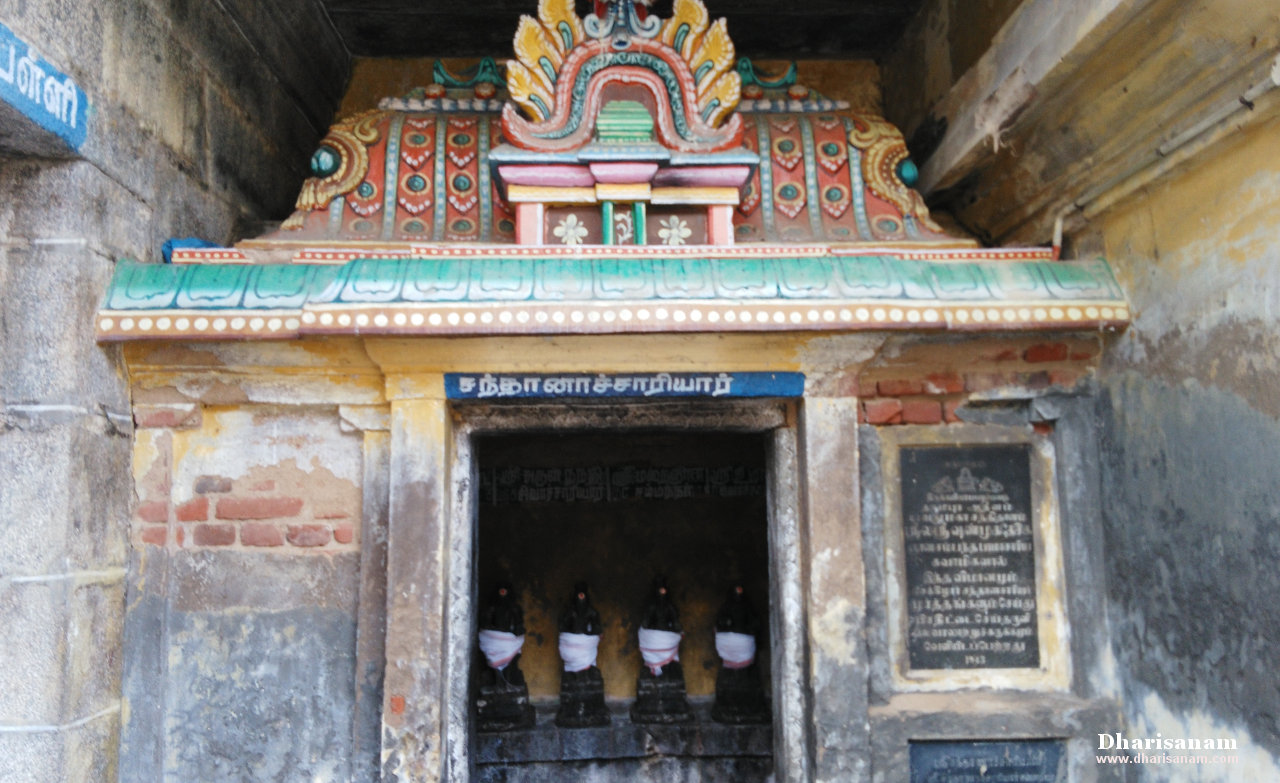 As the primary Shivalingam is “swayambu”, the lord here is praised as “Sri Swayamprakasa Eswarar”.

Like his brother Murugan, Lord Vinayakar also has six abodes. They are Thirunaraiyur (this place) Thiruvannamalai, Virudhachalam, Thirukkadaiyur, Madurai and Kasi. Thirunaraiyur is considered to be his first abode.

The shikara on top of the sanctum sanctorum is in the shape of a half- moon. There are two “kalas” on top of it. This is an architectural rarity. It is believed that Goddess Parvathy is always a part of Lord Shiva, thus signifying the second Kalas. 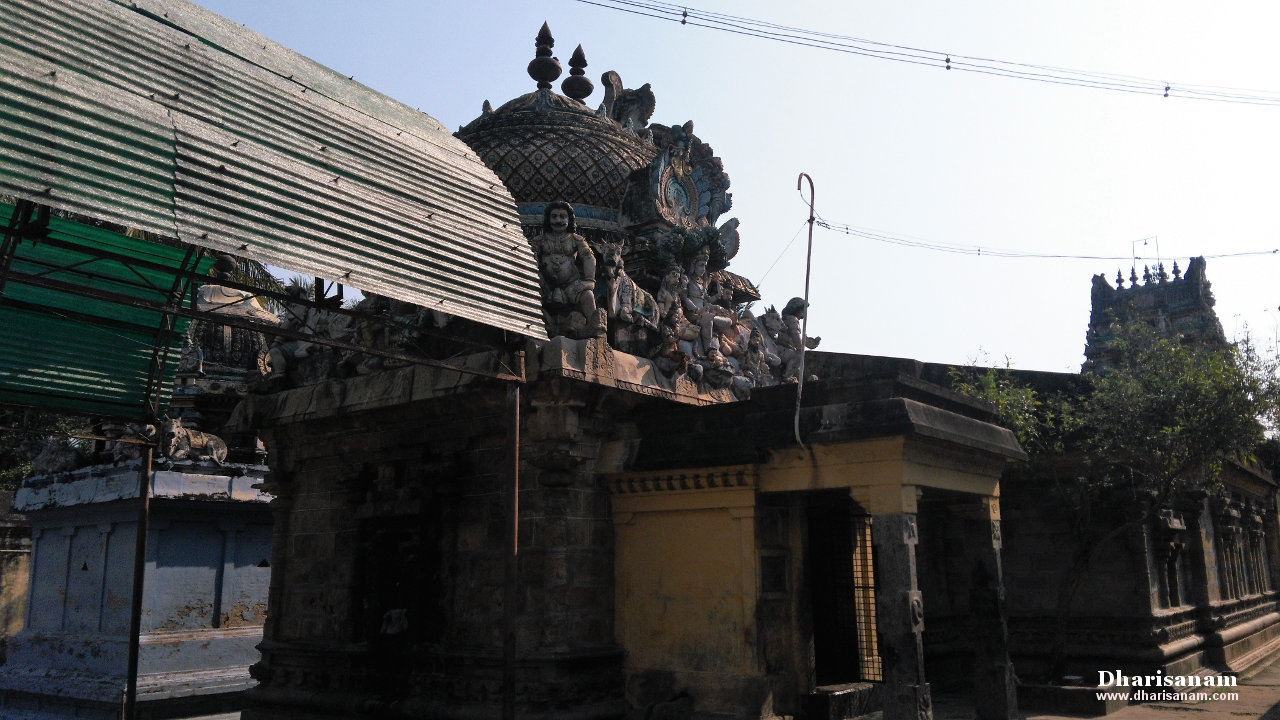 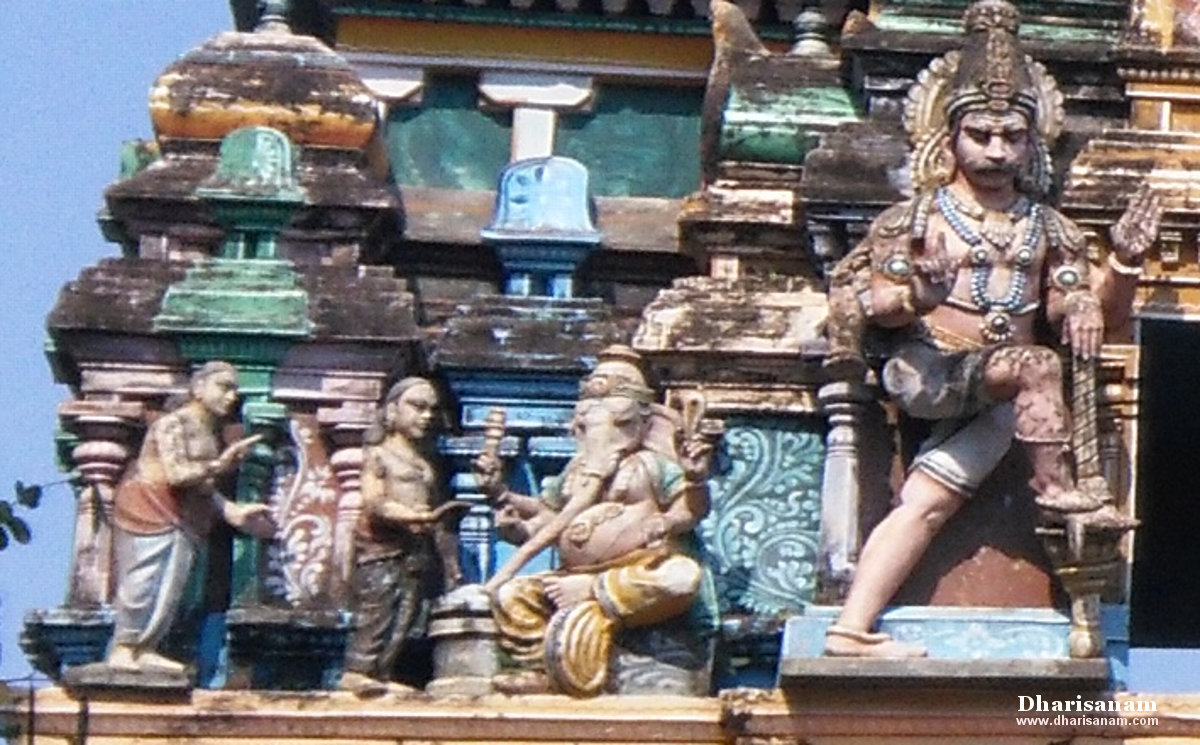 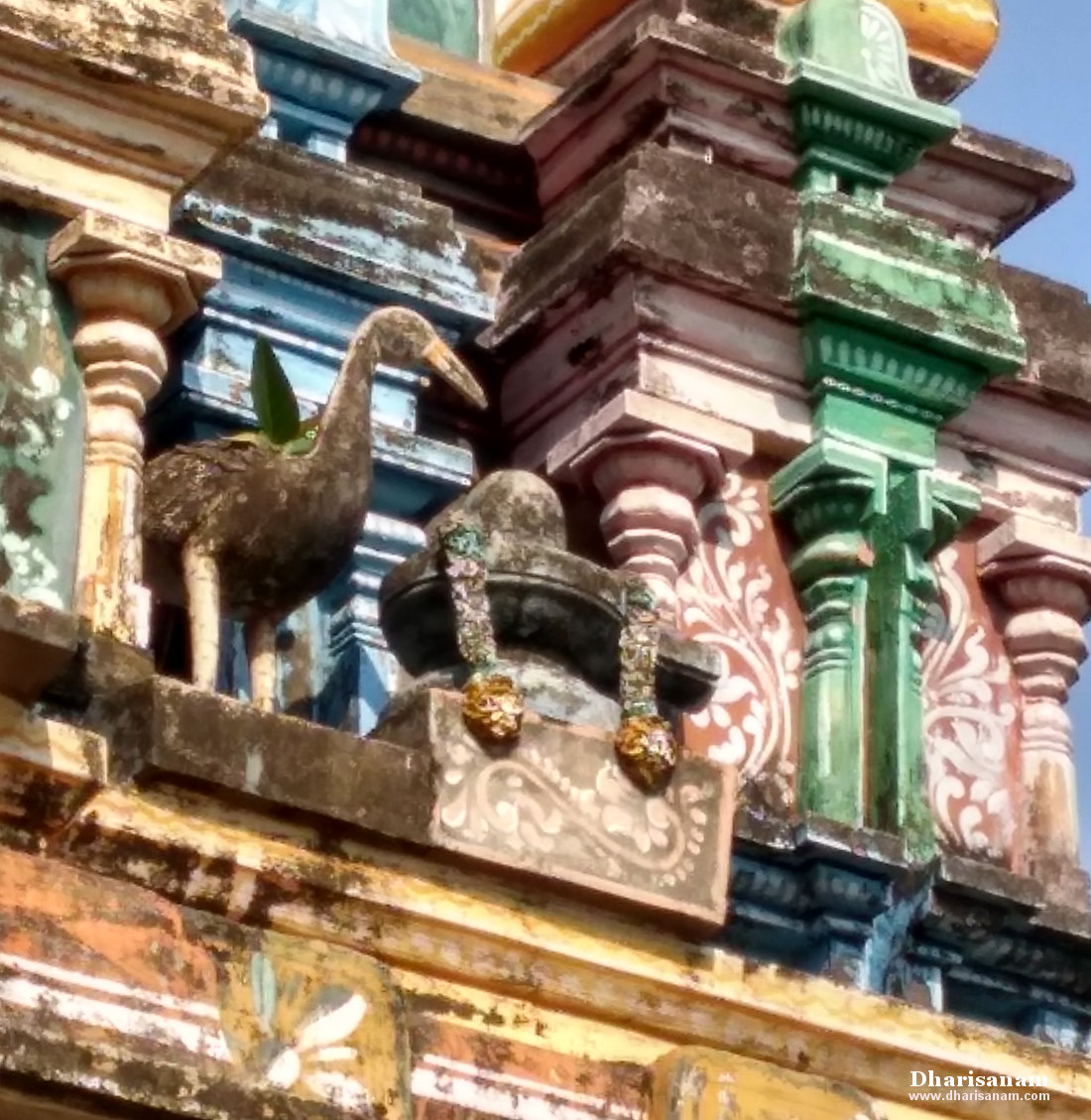 There is also a separate small temple for Nambiyandar Nambi in front of this temple.

There are beautiful sculptures on either side of the second gopuram. On one side Polla Pillaiyar is shown taking offerings from Nambiyandar Nambi and on the other side, the sculpture depicts a crane (Naarai) worshiping a Shivalingam.

By worshiping the lord here, devotees can seek forgiveness for all their sins – even those which were committed unknowingly.

The highlights of this temple are the 13-day Brahmotsavam - Rajarajan festival and the Nambiyandar’s Guru Poojai (date of salvation) festival which are celebrated in the Tamil month of Vaikasi (May-June).

Vaikasi Visakam in the Tamil month of Vaikasi (May-June),

Note: It has been notified by the temple authorities that the Brahmotsavam festival will be celebrated this year (2018) after a long gap of 70 years.

The temple priest Sri Muthukumaraswamy Gurukkal can be contacted at 99432 54861. 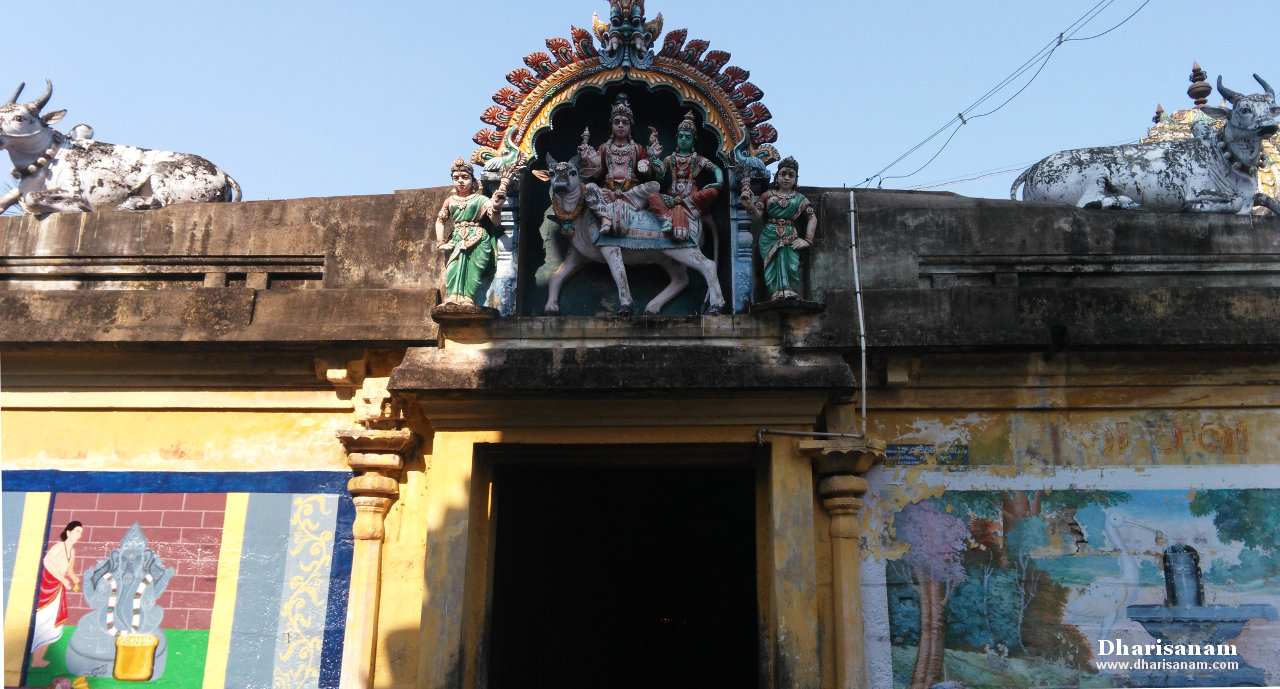 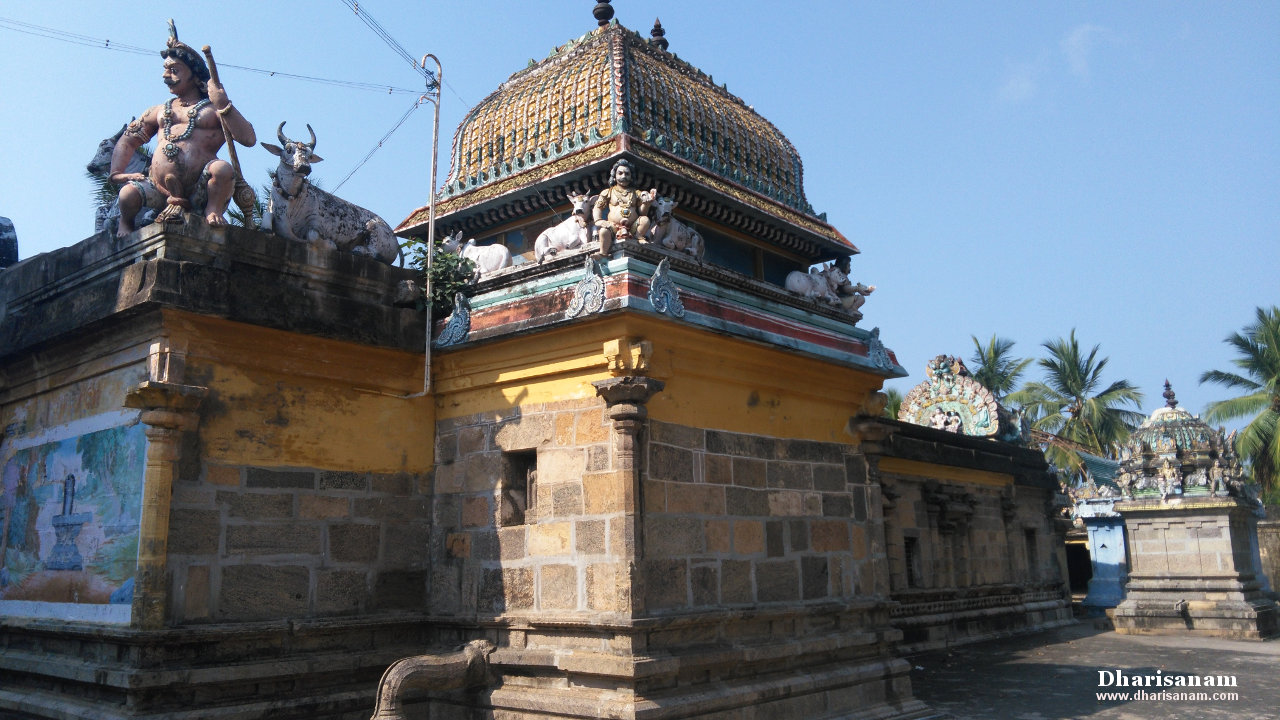 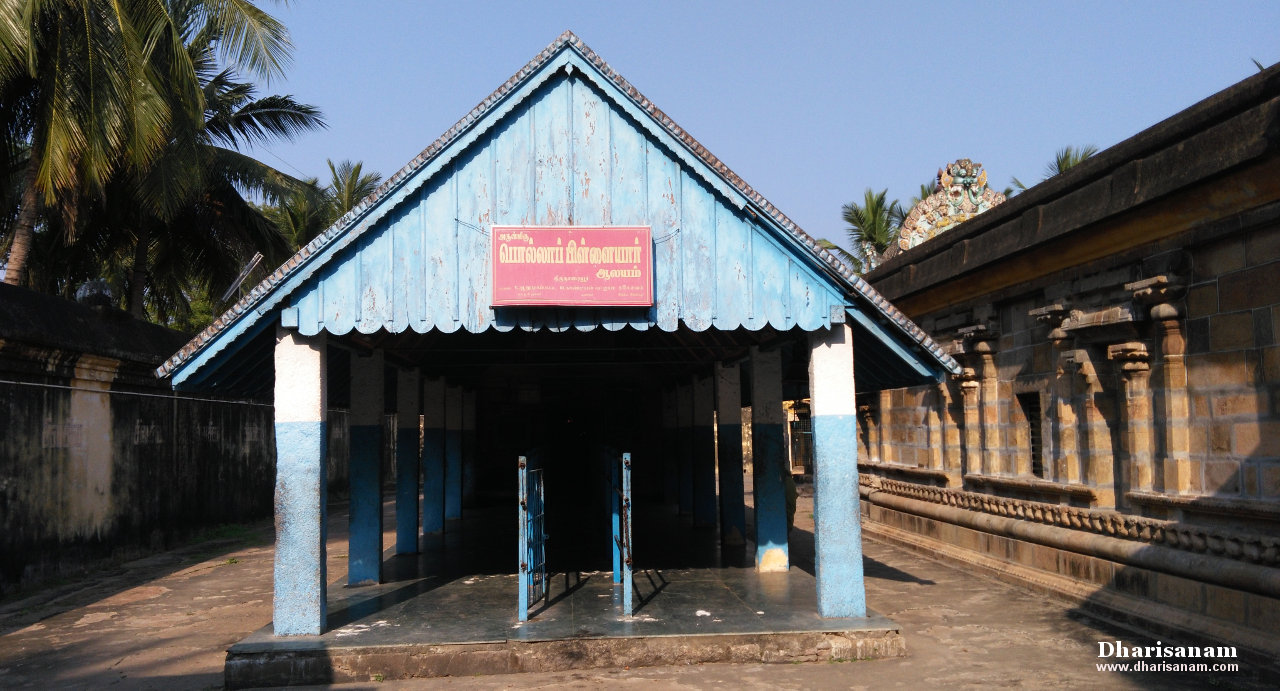 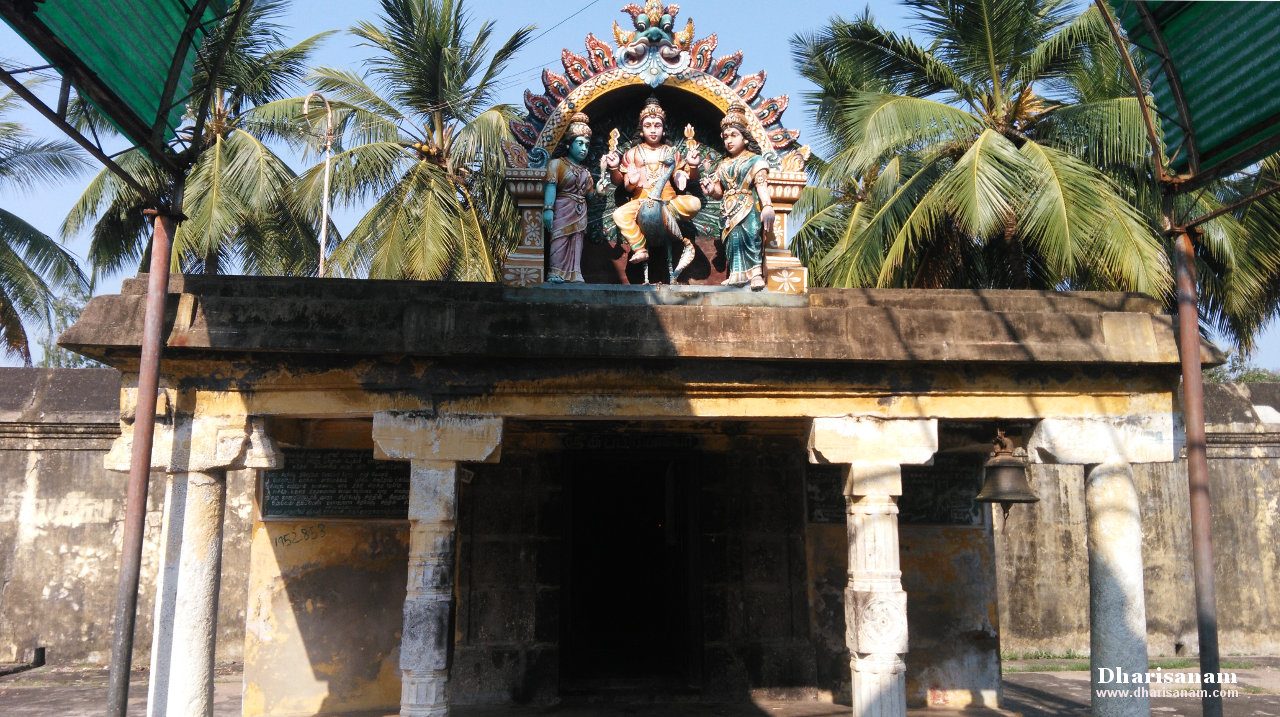 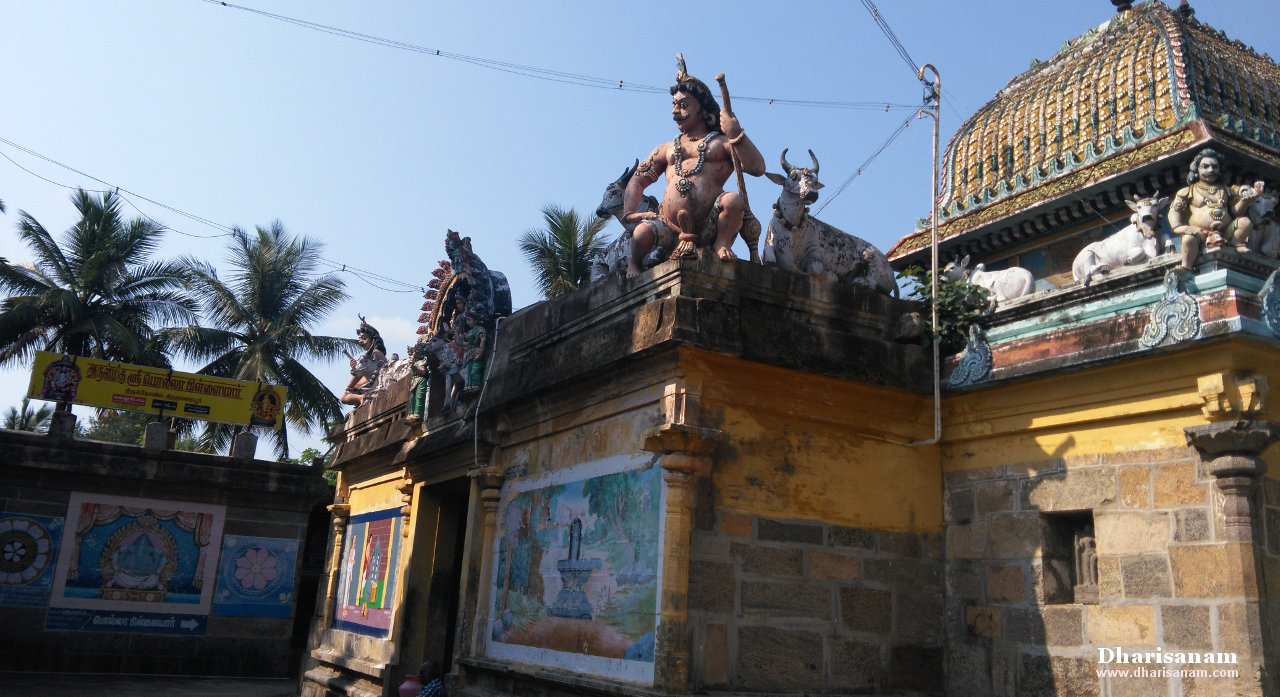