A tour of the renowned temples of India.

Tamil Nadu, the land of temples, is home to thousands of Shiva temples. Each and every temple has its own legend and historical significance associated with it. Among them, the 276 Devara Paadal Petra Shiva Temples, where the Devaram Hymns were rendered, are greatly revered.

Devaram hymns were rendered by three great Saiva Poet-Saints and scholars - Thirugnanasambanthar, Thirunavukkarasar (Appar) and Sundaramurthy Nayanar (Sundarar). These “Devara Moovars” graced these temples with their presence and rendered Pathigams (hymns) praising the lord at these temples.

This website tries to provide accurate information about the Devara Sthalams I have visited so far - the exact location, legend, uniqueness and contact details of temple authorities.

Thiru Pukalur is situated at a distance of about 7 kms west of Sannanallur junction on the Thiruvarur to Peralm route.

It is interesting to note that this temple (Thiru Pukalur Vardhamanecharam) is situated inside Thiru Pukalur temple’s complex. Thiru Pukalur itself is another Devara Paadal Petra Sthalam where the main deity is Lord Agneeswarar.

This temple’s main deity is Sri Vardhamaneswarar’s and the lord’s shrine is located adjacent to the sanctum of Lord Agneeswarar.

The Moovars (three saints) have rendered a total of 9 pathigams here. Out of this, 8 are about Thiru Pukalur and the remaining one is about this temple. The pathigam about this temple was rendered by Saint Thirugnanasambanthar. 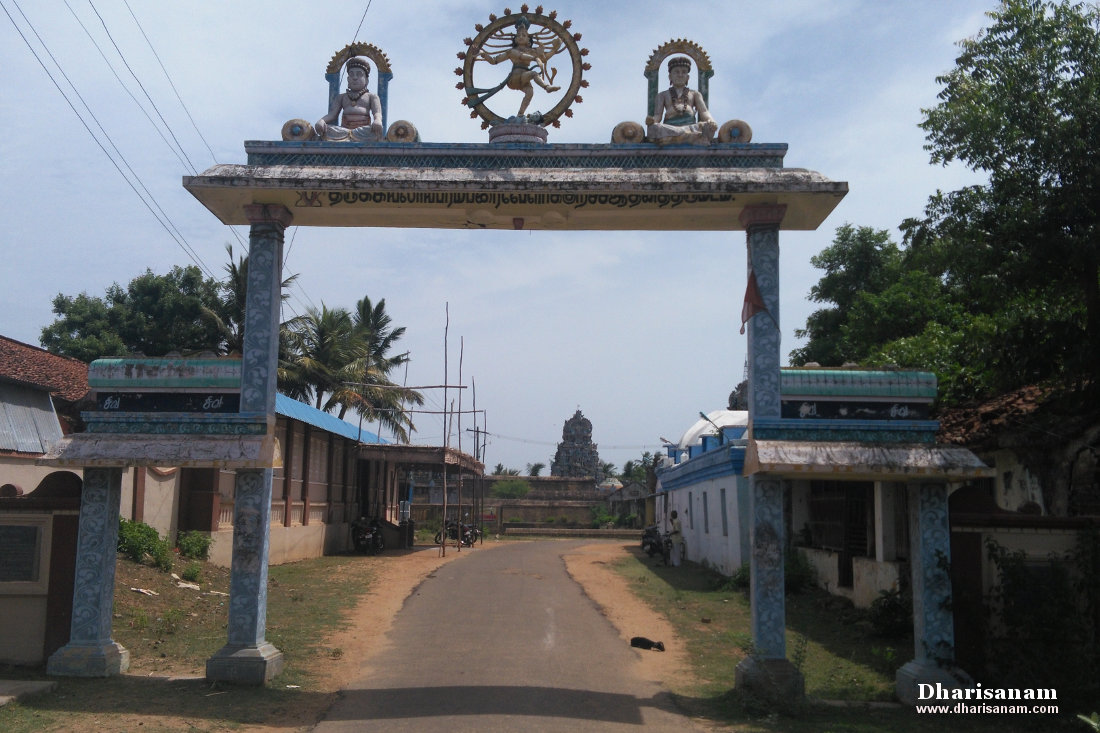 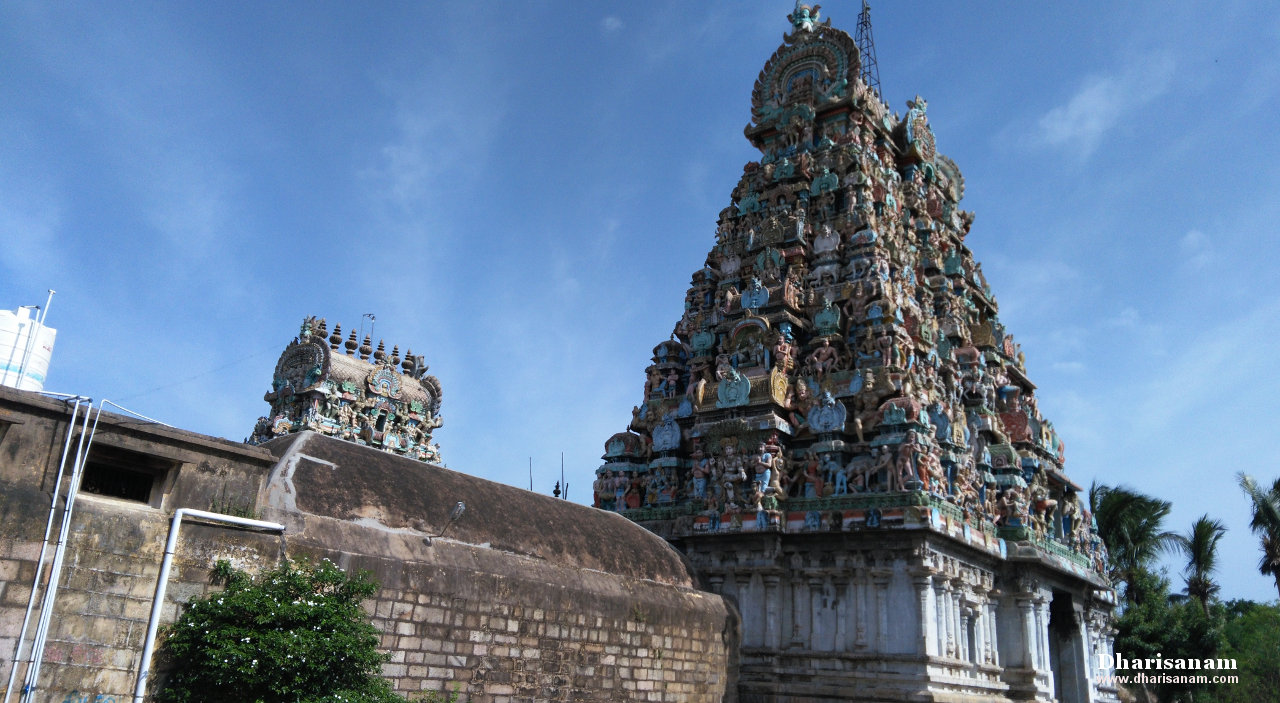 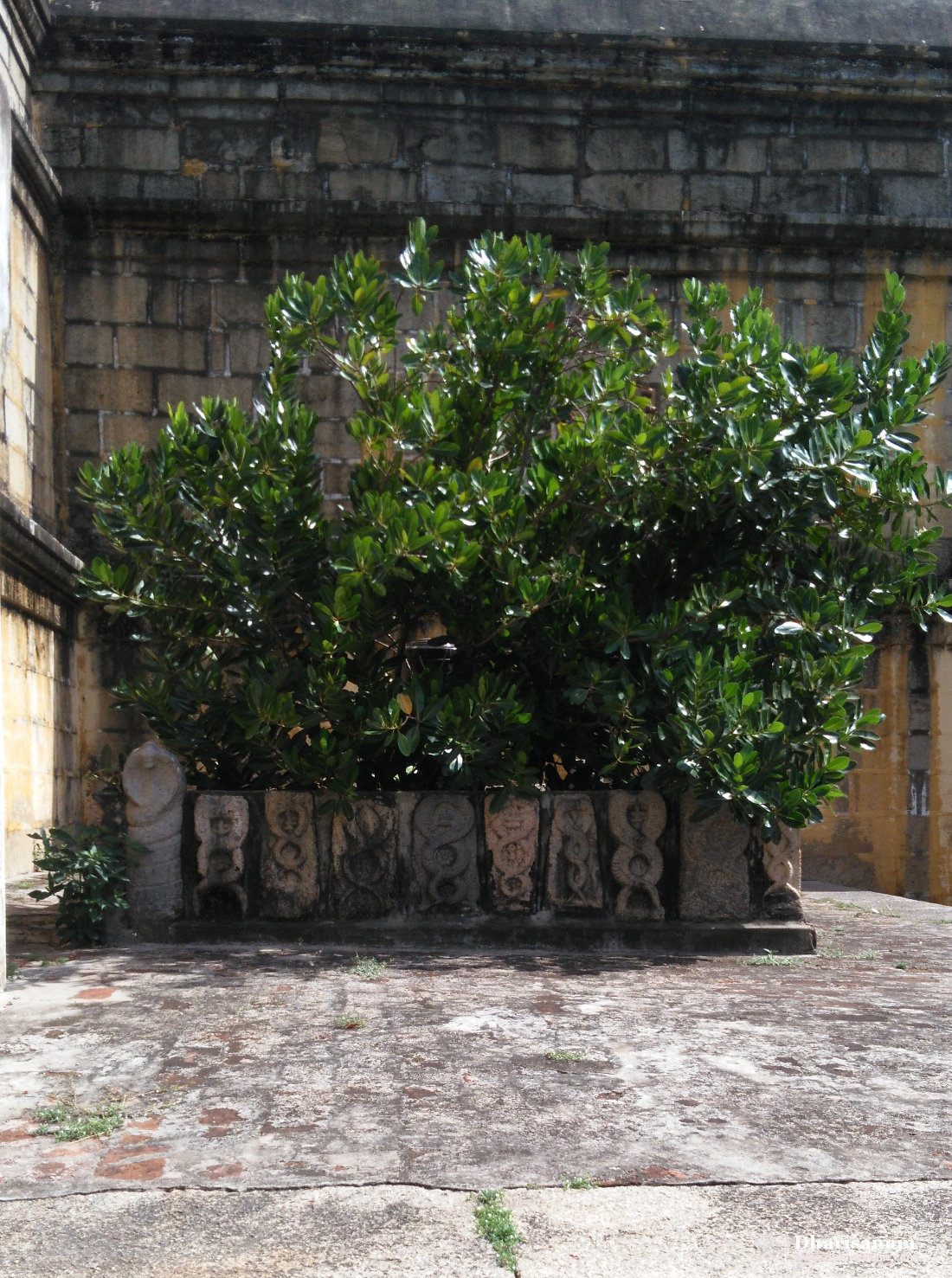 Thiruppanaiyur is located at a distance of about 12 kms from Thiruvarur on the Thiruvarur to Mayiladuthurai (via Andippanthal- Sannanallur-Peralam) route. Take the diversion road from this temple’s arch after Sannanallur and proceed further for about 1.5 kms to reach this temple.
From Andipanthal, cross the Putharu railway crossing and travel further for about 3 kms to reach Panayur.

The historical name of this place is Thalavanam and the temple is known as Thalavaneswaram (“Thalam” means palm tree).

According to history, the great Chola King Karikalan grew up in this temple and lived here for around 10 years so that he could be shielded from his enemies.  Karikalan was born after his father King Ilamchetchenni was killed by his enemies. After his father’s death, Karikalan and his mother were sent to this temple by his maternal uncle, Irumbidar Thalaiyar who was a Sangam era poet. Irumbidar Thalaiyar did so to ensure that the boy could be raised in peace.

At this temple, Karikalan’s mother prayed to the lord asking him to protect them from their enemies. It is believed that Lord Vinayakar here started protecting them. When Karikalan attained the age of 13, with his uncle’s help, he fought and regained his kingdom. It is believed that when the Chola ministers sent a state elephant to look for the prince, the elephant found Karikalan and garlanded him.

At the entrance of this temple, there is an idol of Vinayakar called “Thunai Iruntha Vinayagar” (“thunai” means escort, “iruntha” means side by in Tamil).

There are about 14 stone inscriptions in this temple which date back to the periods of Chola king Kulothungan-I, Sundara Pandiyan, Parakirama Pandiyan, Rajathi Rajan-I and Rajarajan II.

In these inscriptions, the lord is mentioned as Panaiyadiyappan and Panangattiraivan. It is also mentioned that this temple was built in granite in the early 11th century. The village around this temple is referred to as Rajendra Cholap Panaiyur. 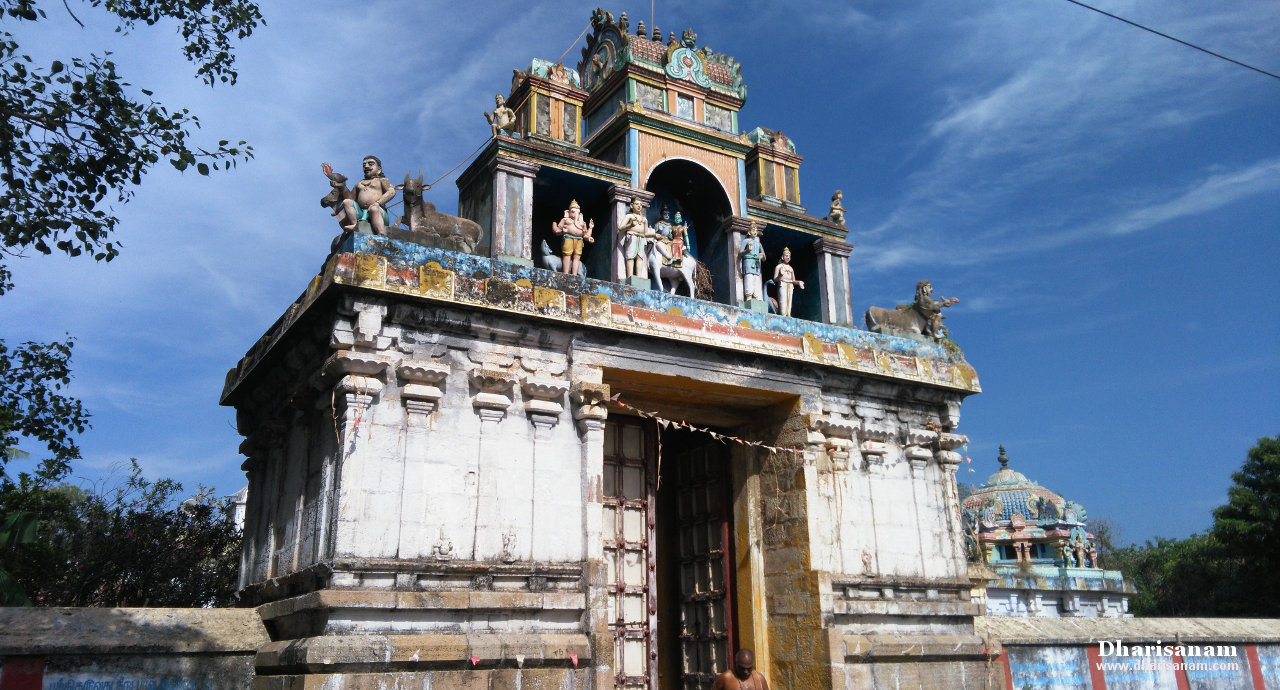 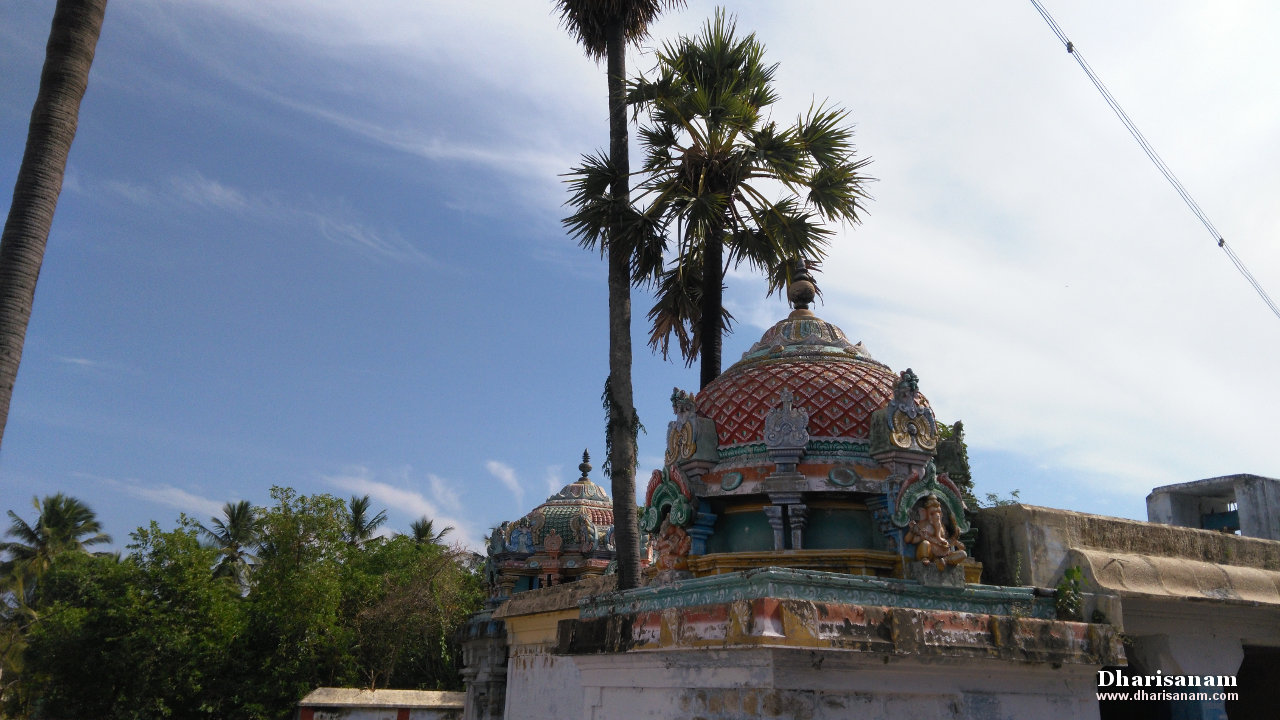 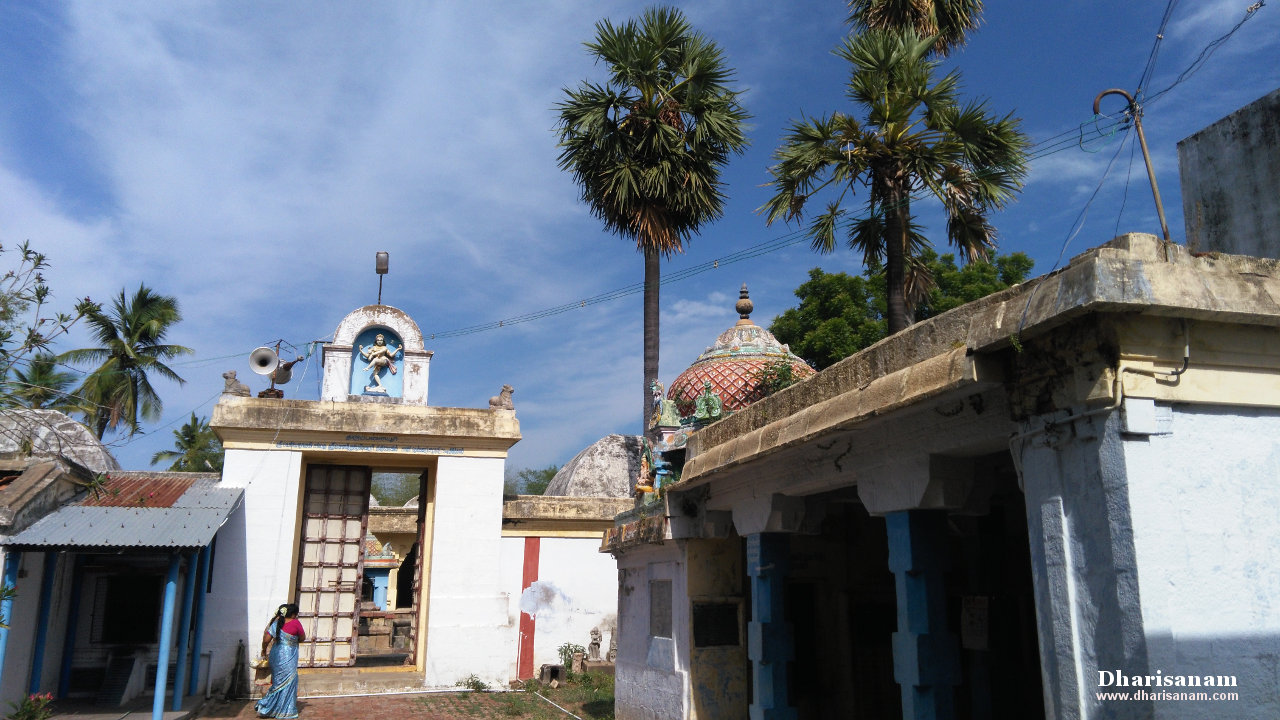 The historical name of this place is Rama Nandheecharam which was later changed to Ramanadeecharam and is now known as Thiru Kannapuram.

This is one of the auspicious temples that Lord Ram visited on his way back to Ayothya.

This temple is under the administrative control of (Thiruppukalur) Velakurichi Adheenam and the HR & CE. 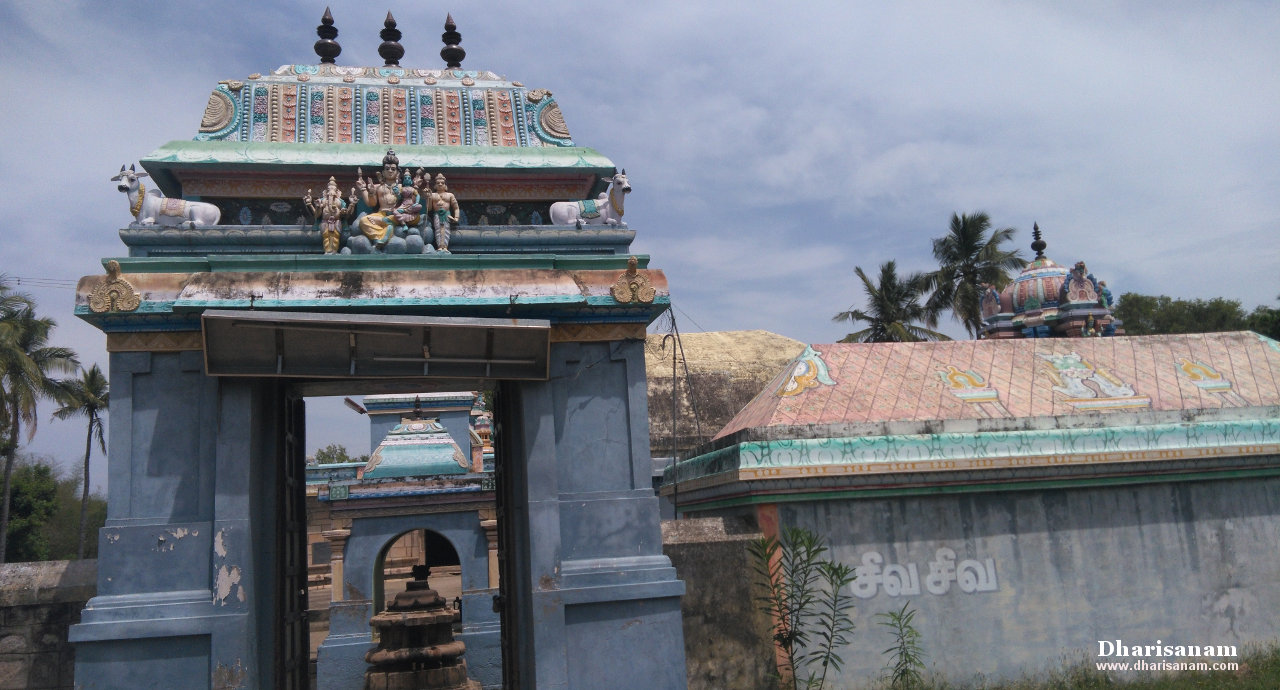 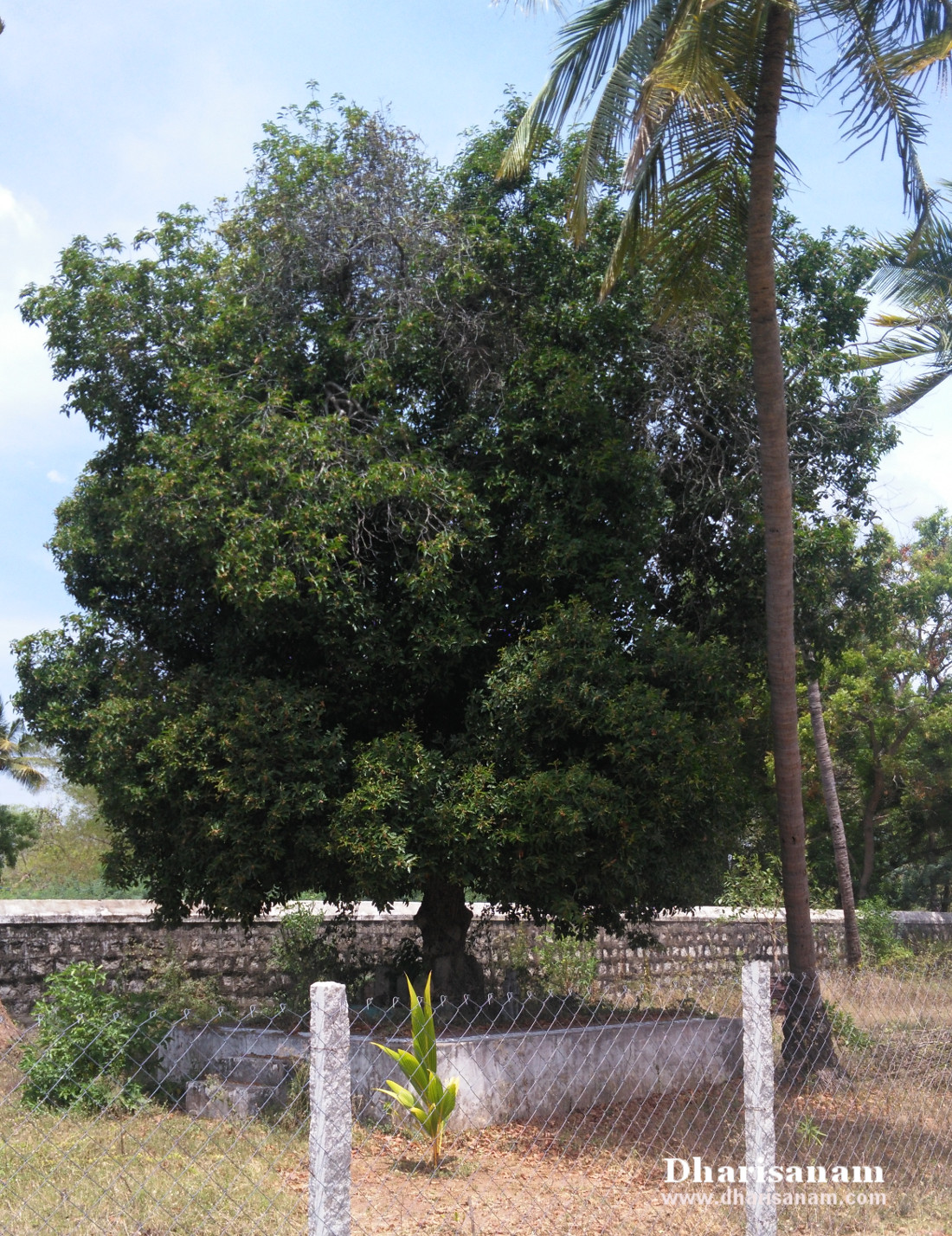 Though the historical name of this place is Pazhayarai Vadathali, now there are two separate villages – one called Pazhayarai and the other called Vadathali. Both of them are approximately one kilometre apart. The Devara Paadal Petra Sthalam is located in Pazhayarai. In Vadathali, there is a separate temple.  Saint Thirunavukkarasar (Appar), while rendering his hymn, combined these two temples.

Sri Vimalanayaki along with Sri Dharmapureeswarar grace the temple at Vadathali. This temple is also known as Vallalar Koil and it is considered as one of the “Vaippu Sthalams”. This is a Madakkoil built by king Kochengat Cholan.

It is believed that once this temple was closed and buried under the ground by some Jains (Samanar). When Saint Thirunavukkarasar (Appar) had come to Pazhayarai, he realized that something was unusual about Vadathali. When he enquired the local people, he was told that the temple in the village was hidden under the ground by the Jains. He then started fasting (“Sathyagraham”) here in order to find the location of the Shivalingam. It is believed that Lord Shiva came in the dream of the local Chola king Manimudi Devan and told him to assist Appar. The temple and the Shivalingam were found and re-established for worship. 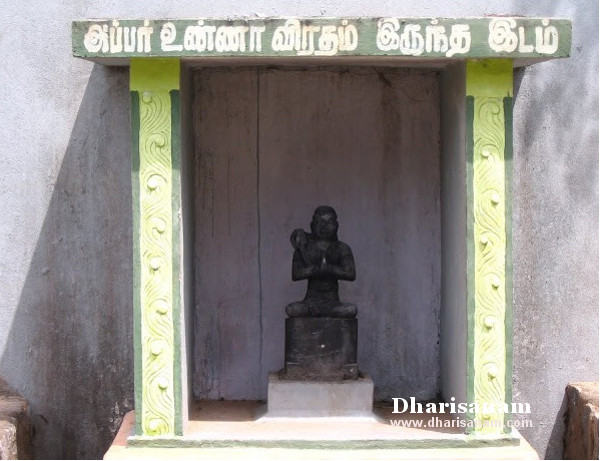 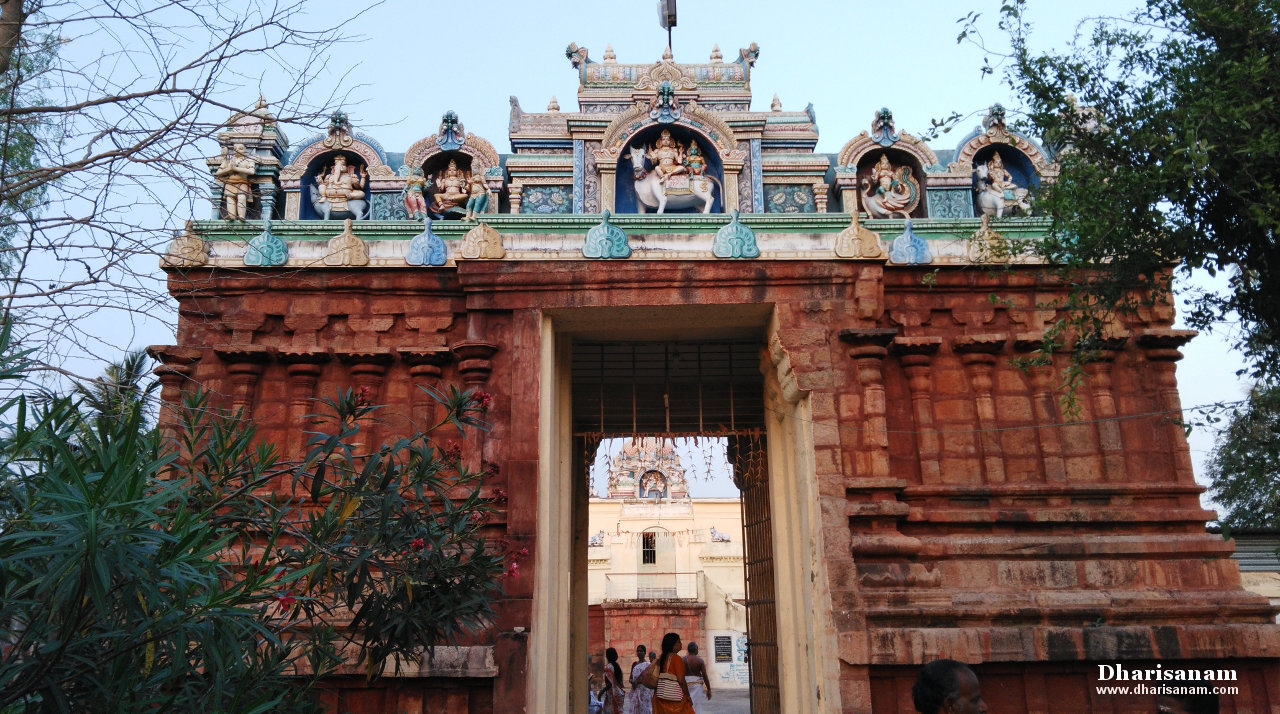 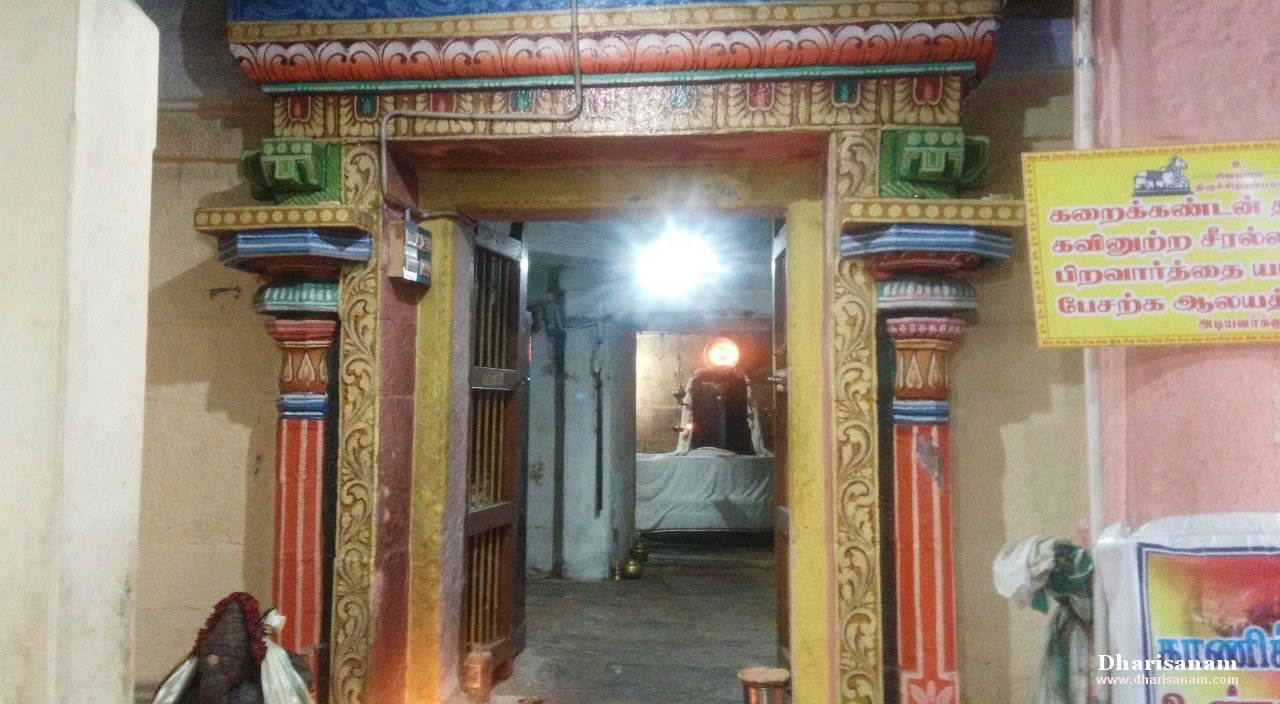 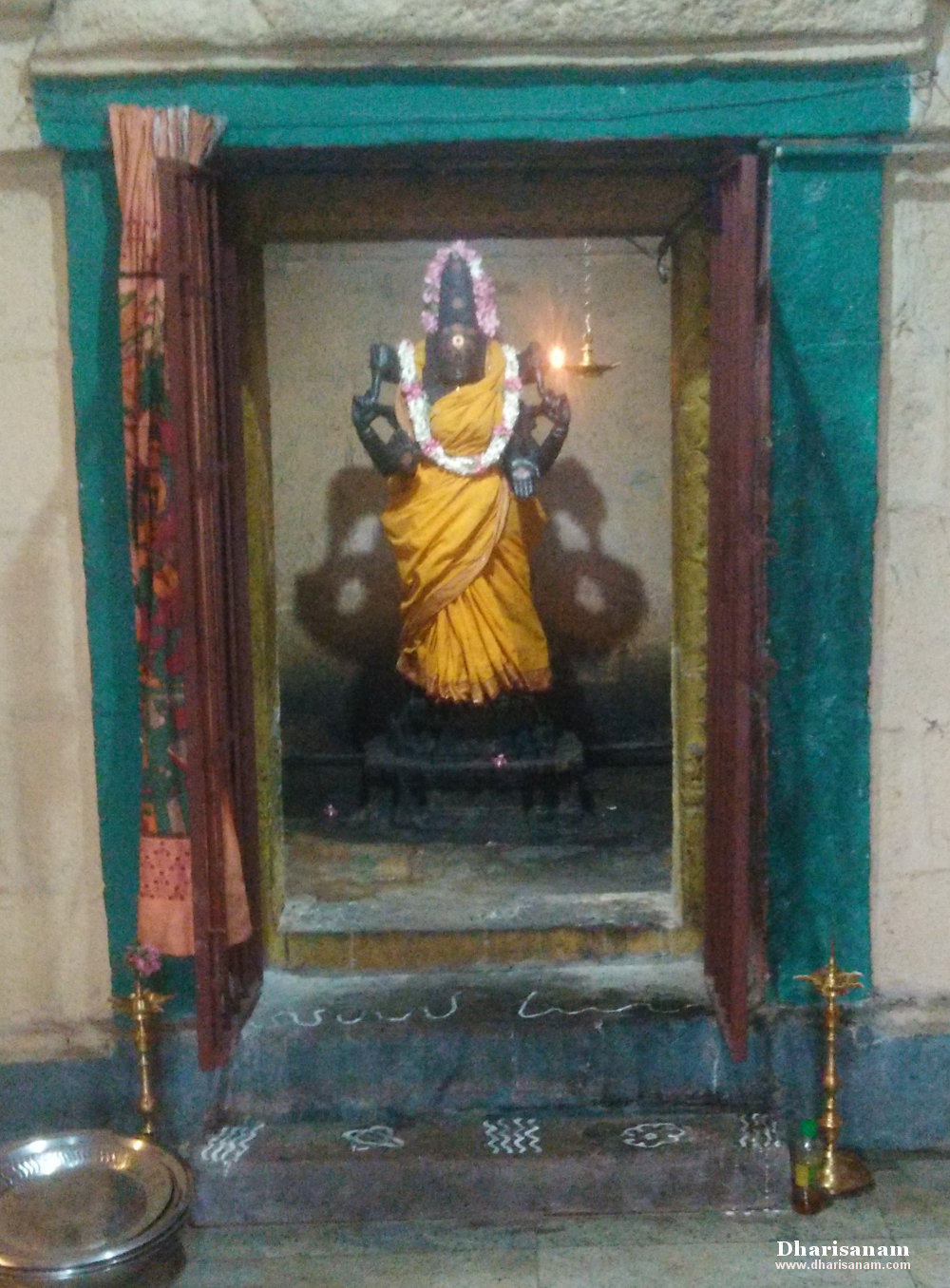 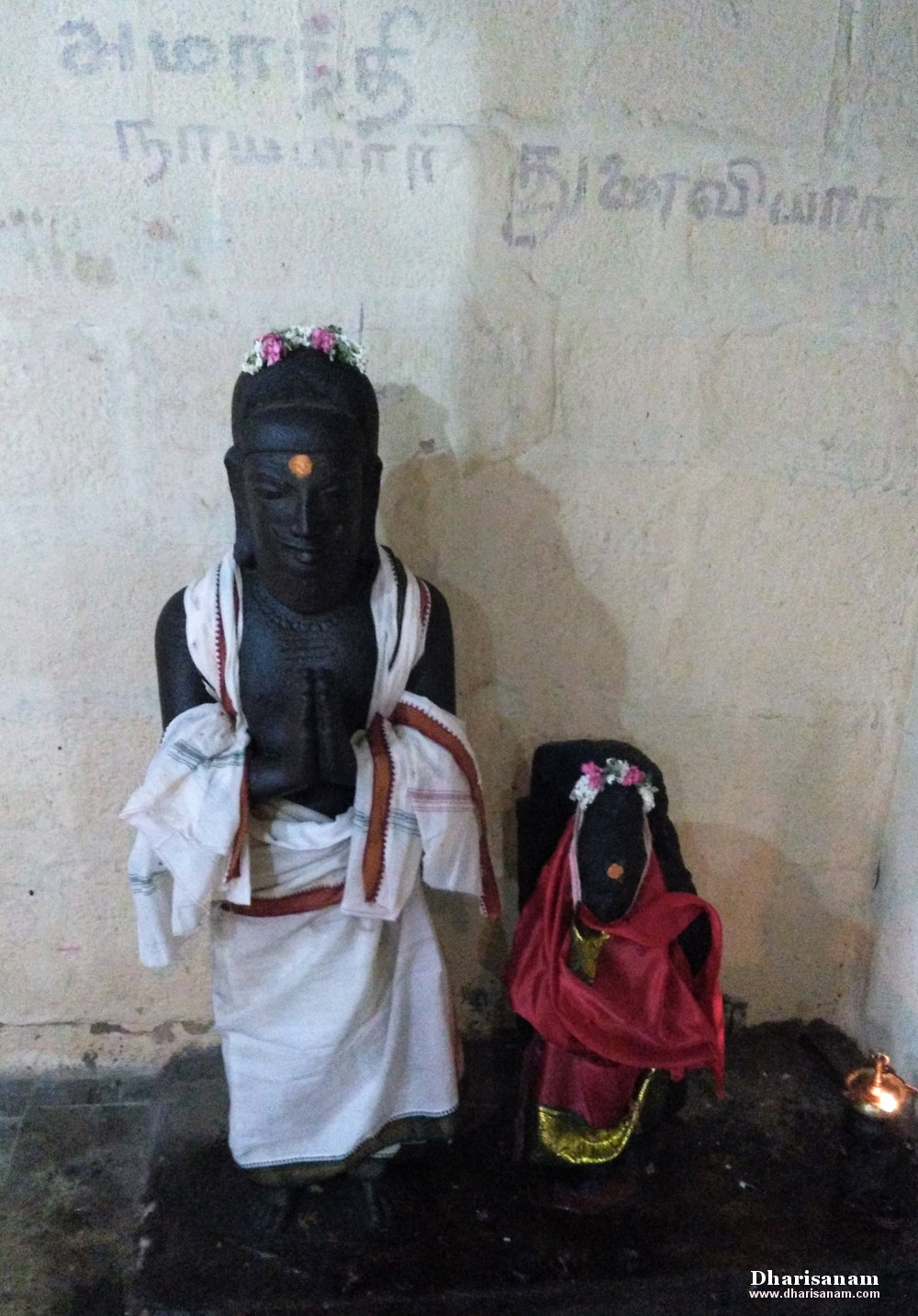 In ancient times, this place was a part of the Chola capital and many Chola kings ruled from Pazhayarai. During that time, Pazhayarai was a big city that spanned 8 kms in length and 3.5 kms in width. It consisted of many villages such as Patteswaram, Muzhayur, Udayalur, Shakti Mutram, Cholan Maligai (where the king’s palace was situated), Darasuram and Ramanathan Koil. Pazhaiyarai was divided into four blocks. These are – Vadathali, Metrali, Keezh Thali and Then Thali. This temple is located at Keezh Thali. 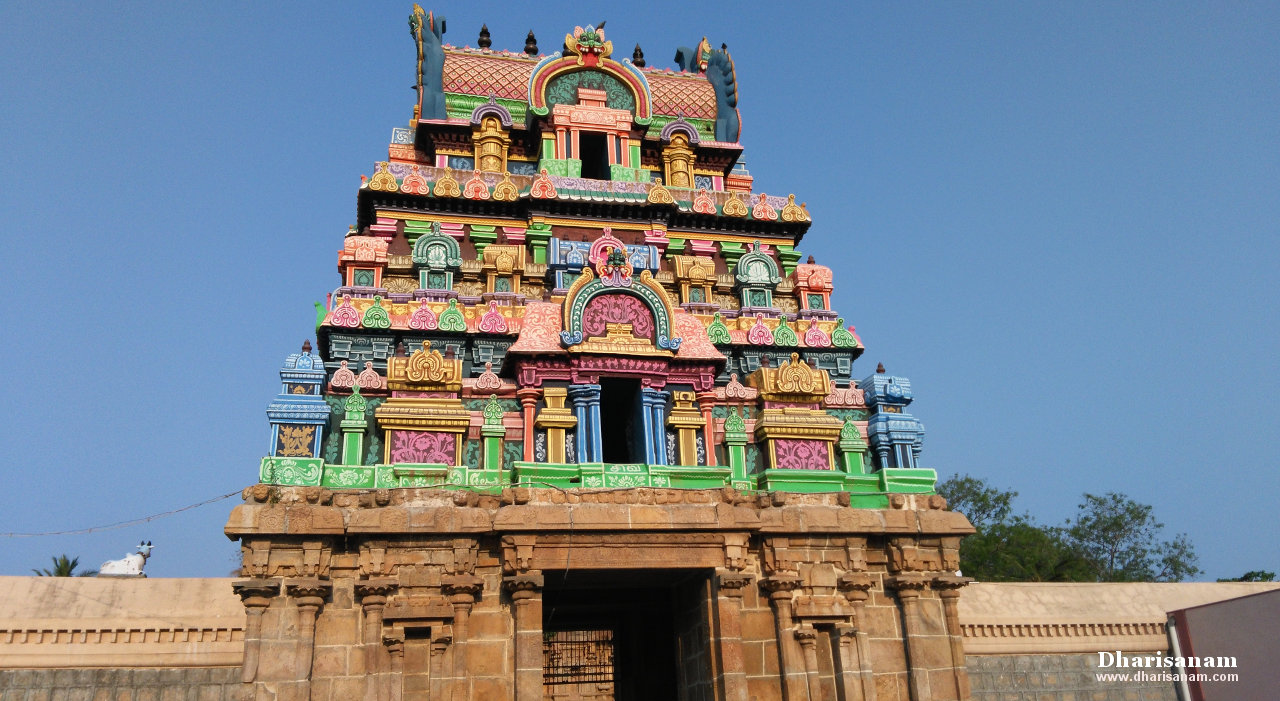 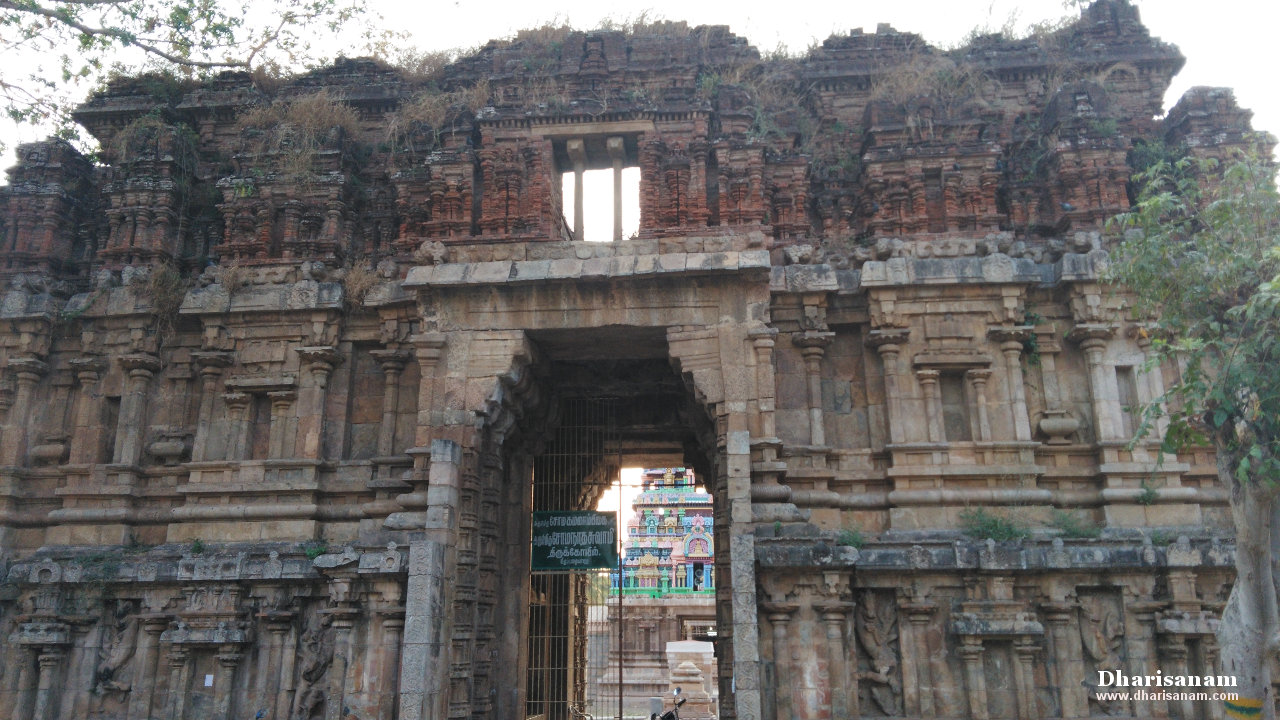 Karuveli is located at a distance of about 22 kms from Kumbakonam on the Kumbakonam to Poonthottam route (Via Koonthalur). It is about one kilometre away from Koonthalur; 10 kms from Poonthottam and 11 kms from Nachiyar koil.

This ancient temple is situated on the northern banks of the river Arisilaru, a tributary of the river Cauvery. This village’s name is Karuvili and the temple is known as Kottitai. However, now this place is called Karuveli.

There are certain stone inscriptions in this temple which date back to the periods of Chola king Rajathirajan-II and Rajendra Chola. This temple was built and renovated by the Chola kings.

This temple is also under the administrative control of the Hindu Religious and Charitable Endowments Department of Government of Tamil Nadu (HR&CE). 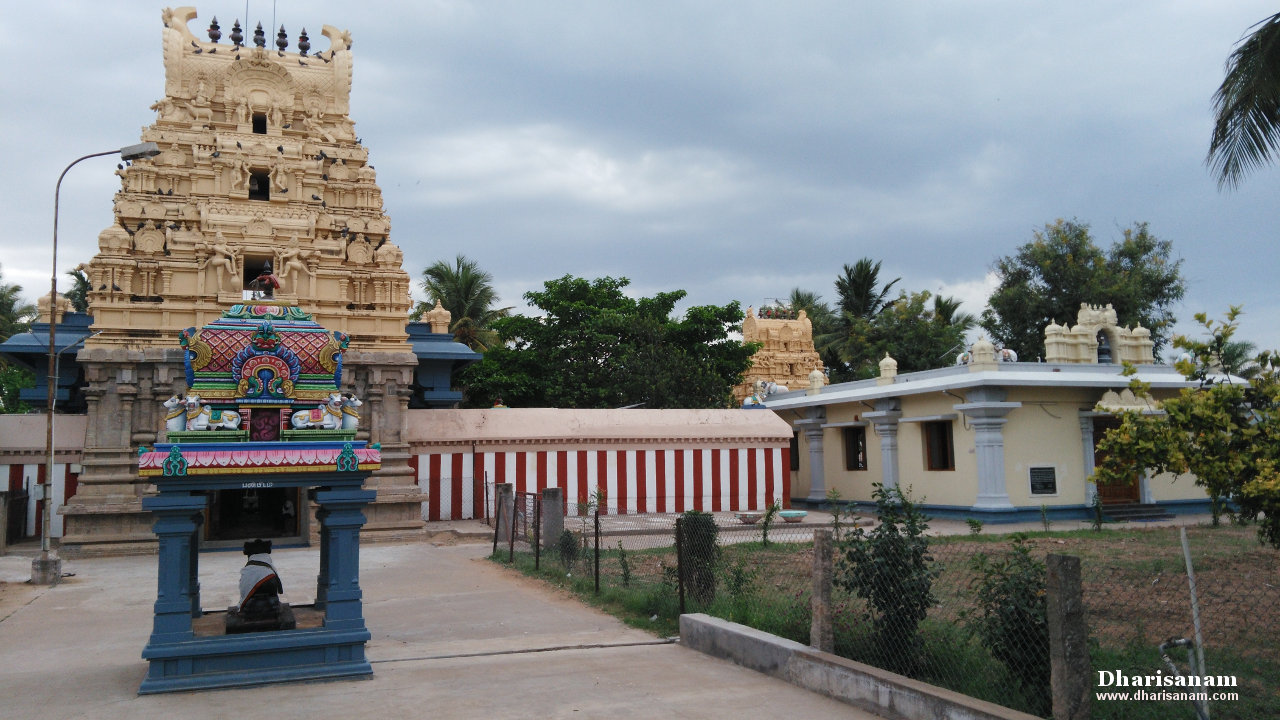 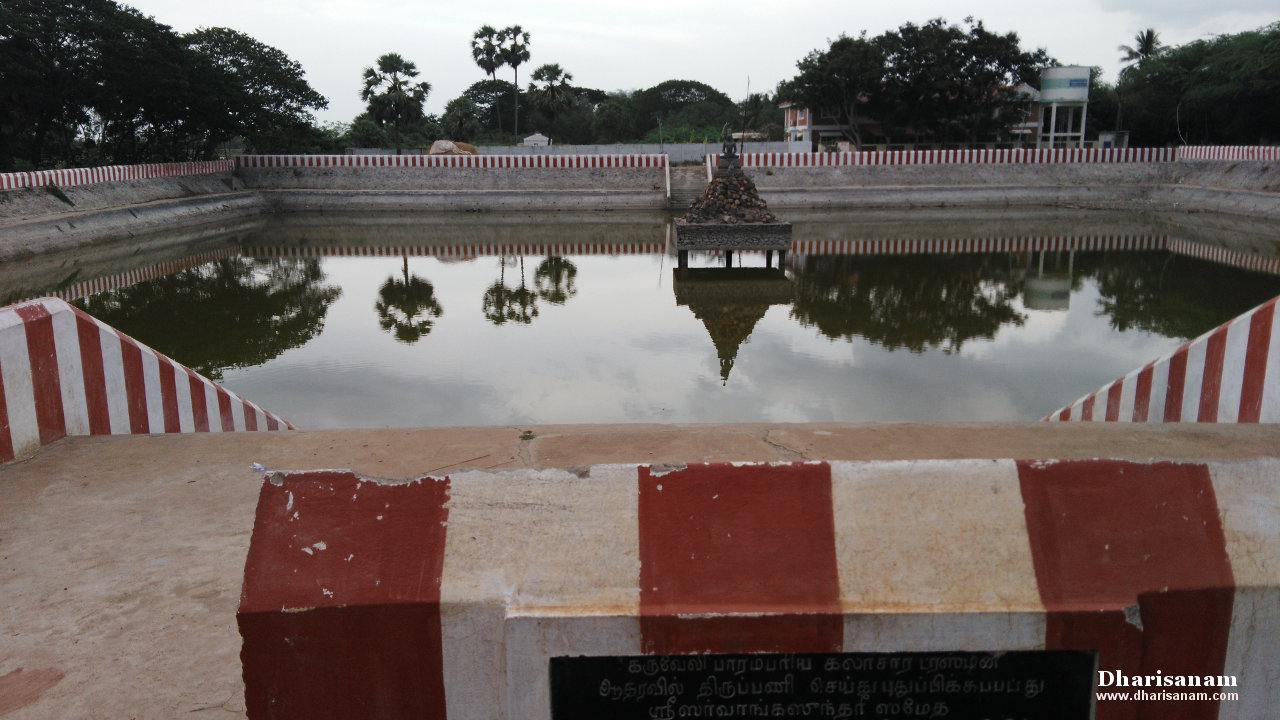