Srikalahasthi is 45 kms from Tirupathi, 100 kms from Chittoor and 120 kms from Chennai. It is well connected by road from all places in Andhra Pradesh. There is a Railway Station in Srikalahasthi. The nearest airport is Tirupathi, which is 20 kms away.

This temple was originally constructed by Pallava kings in 5th Century CE. It is believed that it was reconstructed in 12th Century CE by Chola and Vijayanagara Kings. Unlike many other Shiva temples in India this temple has a large number of impressive structures.

This temple was carved out of a huge stone hill on the banks of river Ponmukali. There is a 100-pillar hall (mandapam) that is believed to have been constructed by the Vijayanagara King, Krishnadevaraya in the year 1516. This hill is also called as “Kailash Hill”. 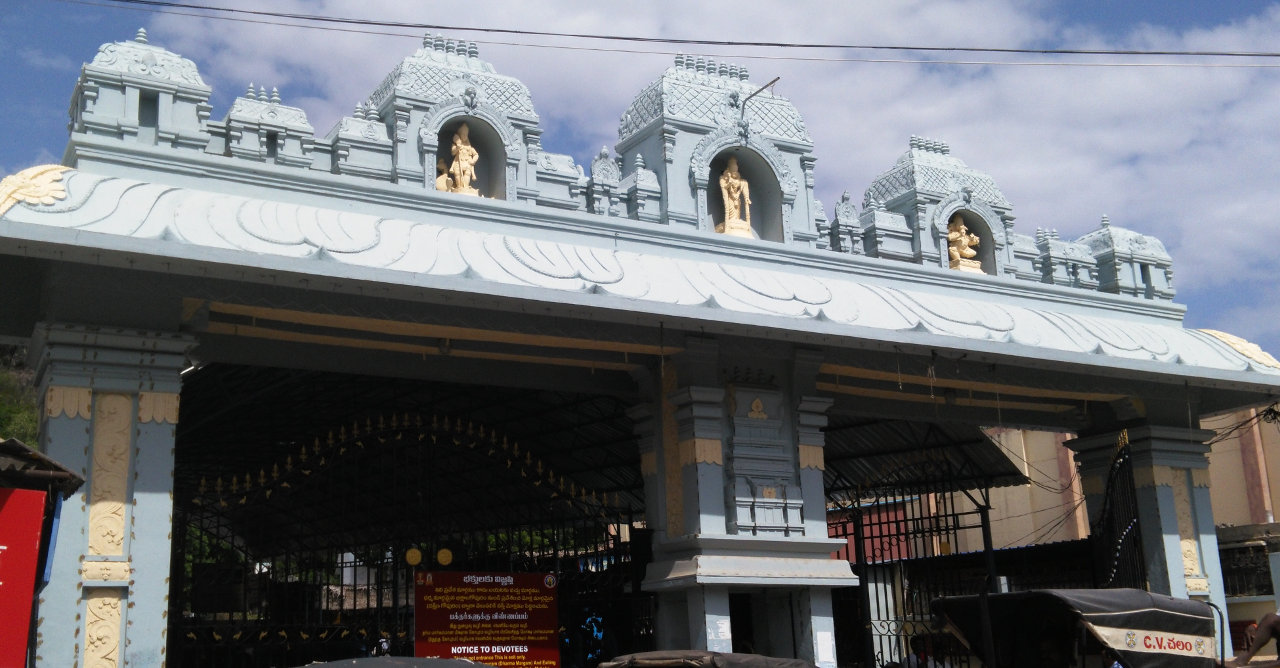 According to the legend, there were once three staunch devotees of Lord Shiva – a spider (Sri), a serpent (Kala) and an elephant (Hasti). It is believed that the elephant used to clean the deity Lord Shiva by watering the idol with river-water carried in its trunk and placing “Vilva” leaves on the lingam. Similarly, the spider praised Lord Shiva by weaving its web to provide shelter to the lingam and the snake praised the lord by placing its precious gem on the lingam to adorn the lord. Impressed by their unflinching devotion, Lord Shiva granted them a boon that their names would be merged with the name of the lingam itself and it will henceforth be called as Srikalahastheeswarar.

Another legend associated with this temple is that of Kannappa Nayanar (one of the 63 Nayanmars). It is believed that there was a hunter called Thinnanar who used to worship Lord Shiva by bringing water in his mouth from a nearby river and pouring it on the lingam as a form of abhishekam. He would also make offerings of fresh flowers and cooked meat. The priest at this temple felt that the offerings made by the hunter were inappropriate. He complained to Lord Shiva asking the lord to put an end to this. However, this continued for a few more days and on one specific day, Lord Shiva instructed the priest to bear witness to the proceedings. Obeying the lord’s instructions, the priest hid himself to see what was going on.

As usual, Thinnanar came to offer water from his mouth, adorn the lingam with fresh flowers and to make offerings of cooked meat. In order to show the world the true depth of Thinnanar’s devotion the lord decided to play a prank. Suddenly one of the eyes of the lingam started bleeding. Thinnanar immediately tried to stop the bleeding by applying some medicinal plants but his efforts were not fruitful. Unable to think of anything else, he immediately took out one of his arrows and proceeded to pluck out his eye. He then tried to stop the lingam’s bleeding by placing his eye at that spot. 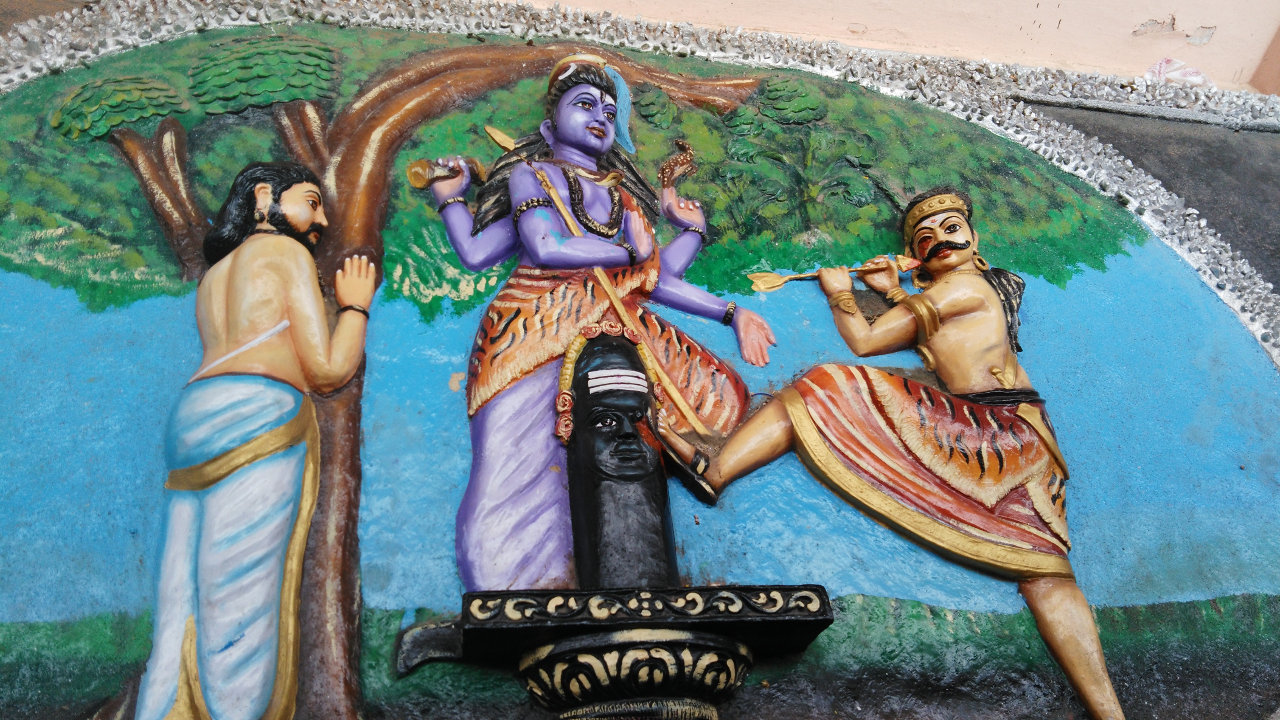 Moved by Thinnanar’s unflinching devotion, Lord Shiva appeared before him and granted him the boon of salvation. He also said that from now on Thinnanar would become known to the world as Kannappa Nayanar (“Kan” meaning eye) and would find his place among one of the 63 Nayanmars.

There is no Navagraham in this temple but only idol of Sani Bhagawan can be seen in the corridor.

There is a small underground shrine for “Pathala Ganapathy”, which is about 35 feet below the ground level and has 20 steps.

Since this lingam is considered to be the “Vayu lingam”, inside the inner sanctum of this temple, you can observe the lamp constantly oscillating / flickering despite the lack of air movement.

It is estimated that lakhs of Shiva devotees visit this temple every year to seek the blessings of the Lord and to attain Moksha.

This temple is considered as “Dakshin Kailash” -  the Mount Kailash of South India. Similar to river Ganga in Kasi, at Srikalahasthi the river “Ponmugali” flows in the north direction. This add to the belief of this temple being the Dakshin Kailash.

Both Kasi (Banaras) and Srikalahasthi are considered to be Mukthi Sthalam (where one can seek to attain salvation).

It is also believed that Rahu and Kethu worshiped Lord Shiva in this temple and were absolved from their sins.

The lingam in this temple is always adorned with a gold-plated cover. This gold-plated cover signifies the 27 constellations (nakshatrams).  Sometimes when the aarthi is shown, this cover is temporarily removed. During such occasion, one can see the reliefs of a spider, an elephant and a five-headed snake at the base of the lingam. A relief depicting the eye that Kannappa Nayanar placed on the lingam can also be seen.

A separate temple for Kannappar is also there on the top of a nearby hill. Vibhuti (sacred ash) is not offered in this temple, but symbolizing the Abhishek Theertham of Kannappar, only Theertham (water mixed with camphor) is offered to the devotees.

“Tharaka Mantra” (commonly known as “Karna Manthra”) is a shlokam that is uttered in the ears of a departing soul. It is believed that like Lord Viswanatha (in Kasi) uttered this mantra in the ears of a dying devotee, the lord of this temple did the same at Srikalahasti. 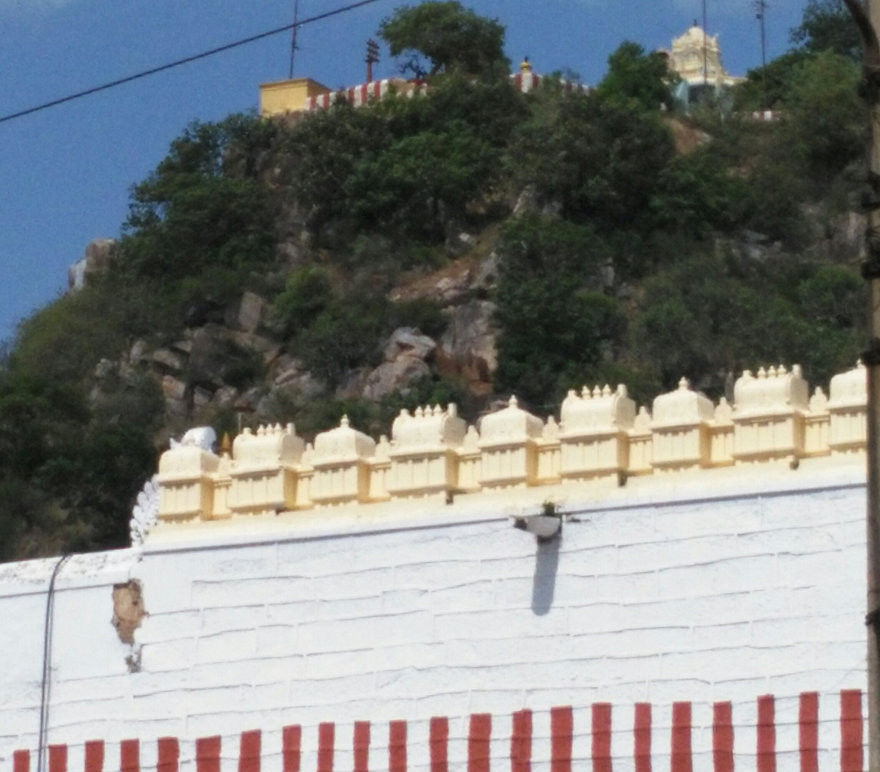 There are two temples at this place – a small temple at the top of hill and a much larger one at the foothill. It is believed that the lingam of Lord Kudumithevar that was worshipped by Kannappa Nayanar is the one that is at the top of the hill. It is also said that all the three Saints (the “Moovars”) claimed atop the hill and rendered their respective Pathigams.

Instead of physically travelling to Mount Kailash, it is believed that Saint Thirugnanasambanthar, Saint Sundaramurthy Nayanar (Sundarar) and Saint Nakkeerar rendered their pathigams about Lord Shiva at Mount Kailash from here itself.

Abhishekam is performed on the Avudaiyar (base) only and not on the Lingam.

It is a common belief among devotees that simply by visiting this temple and worshipping the lord here one can attain salvation.

Oonjal Urchavam (swing/cradle festival) is celebrated here on all Fridays During this occasion, Goddess Gnanappungothai is decorated with golden saree.