Thiruvaikavur is situated at a distance of about 15 kms from Kumbakonam on the Kumbakonam to Thiruvaiyaru route (via Puliancheri). Take the diversion road from Puliancheri and proceed for about 9 kms to reach this temple. It is 12 kms away from Papanasam and 10 kms away from Swamimalai.

This ancient temple is located on the southern bank of the river Kollidam and towards the north of the river Manniyaru.

The historical names of this place are Vilva Vanam and Bhoomi Puram. 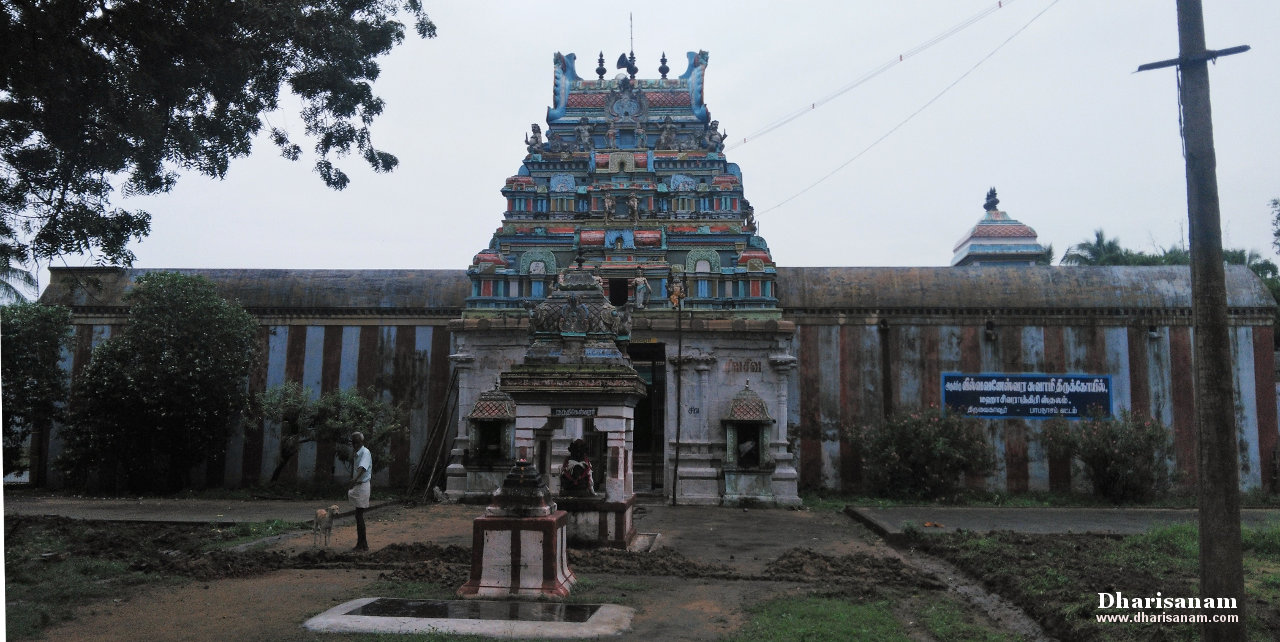 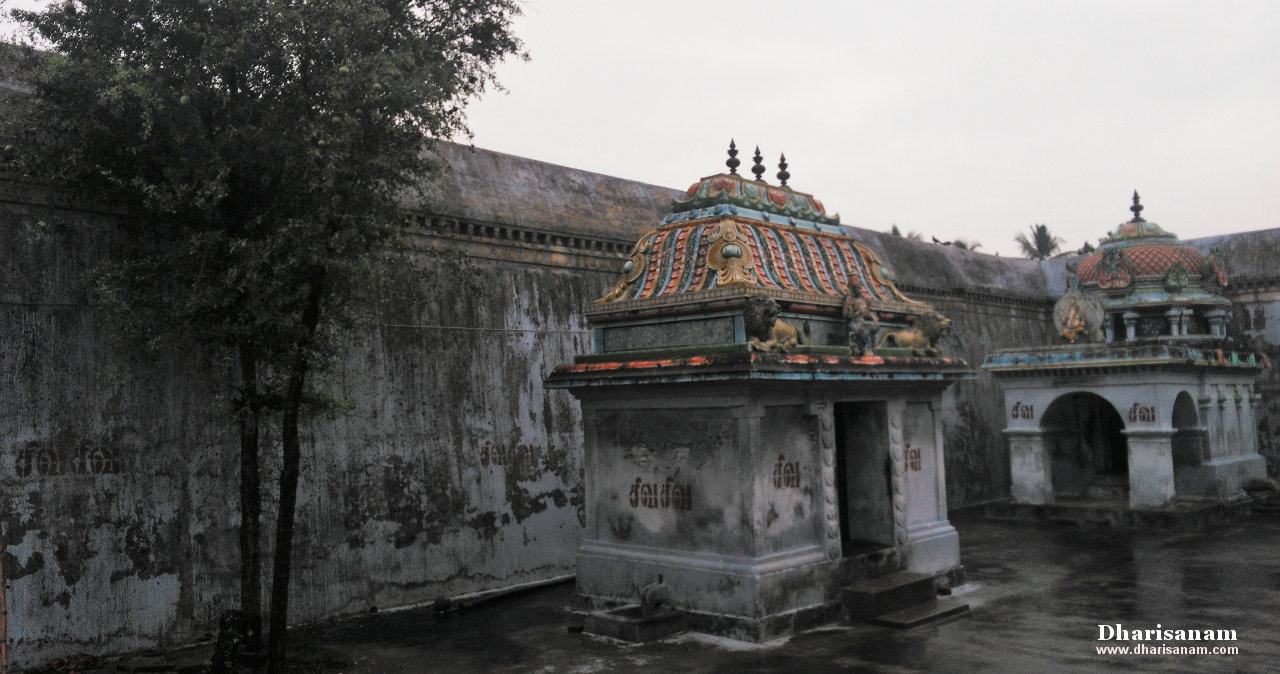 The legend of this temple involves a hunter who came here while chasing a deer. It is believed that the deer surrendered to Sage Dhavanithi who was performing penance in this temple. The hunter reached the spot and asked the sage to release the deer. The sage advised him to leave the deer alone but the hunter was adamant and threatened to kill him if he did not release the deer.

Even after his threat, the sage did not back down and refused to let go of the dear. It is believed that at this point, Lord Shiva came in the form of a tiger in order to save the sage and the deer. On seeing the tiger, the hunter climbed on a tree. The tiger sat under the tree and did not leave. Even as the night approached, both of them did not move from their positions. The hunter was afraid that he might doze off and fall down from the tree. To keep himself busy, he started plucking the leaves one by one and throwing it on the tiger. Incidentally, the night was a Maha Shivratri and the leaf was Vilvam. Pleased with the hunter’s act, Lord Shiva blessed him with his darshan and gave him salvation. It is believed that both Lord Mahavishnu and Lord Brahma had also come here to witness this event.

In the meantime, Yama (lord of death) had also reached this place. He had divined that the hunter’s life would end in the morning. He was not aware that the hunter had been granted salvation by Lord Shiva. He entered the temple to find the hunter and perform his duty. However, Nandhi did not notice Yama entering into the temple. As soon as he entered, the lord took the form of Dakshinamurthy and drove him away with a stick. Lord Shiva then instructed the Dwarapalakas and Nandhi to chase and drive Yama away. Lord Shiva also scolded Nandhi for his carelessness. Eager to seek forgiveness for his mistake, Nandhi used all his might and inhaled deeply to stop the fleeing Yama in his place. Yama prayed to the lord for forgiveness and pleaded that he be released. Lord Shiva then instructed Nandhi to release him.

In order to show his respect for the lord, Yama created a tank here and performed abhishekam to the lord. He stayed here for a few days and performed poojas. The holy water created by Yama is known as Yama Theertham. It is in front of this temple. The idol of Nandhi in this temple is facing towards the entrance. This signifies that he is keeping a watch to stop Yama in case he tries to enter the temple again.

Other legends from Sthala Puranam

As Lord Shiva sent out the dwarapalakas to chase Yama, there are no idols of dwarapalakas here. In their place, Lords Mahavishnu and Brahma are acting as dwarapalakas. Lord Brahma created a tank (Theertham) here and worshiped the lord to retain his role as the creator of the universe.

It is also believed that Goddess Bhooma Devi visited this place and worshiped the lord. Hence this place also gets the name “Bhoomi Puram”.

It is believed that Sage Unthaala had cursed the Saptha Kannihas. They visited this place, worshiped the lord and were relieved of their sins.

Other than the Yama Theertham, there is another Theertham called Agni Theertham. It is believed that Lord Agni created this holy water and worshiped the lord here.

It is also believed that on the advice of Lord Shiva, the four Vedas visited this place and performed penance here in the form of Vilva trees. Hence this place also gets the name Vilva Vanam.

Vallabha Vinayakar, Murugan with his consorts, Sapthamadas, Kasi Vishwanathar, Mahalakshmi, Saraswathi, Vishnu Durgai (2), Bairavar (2), Saneeswarar and Navagraham can be seen in the hall and corridors.

In the main hall, Saptha lingams, Brahma, Vishnu, Vinayakar and the procession idol of Sri Baktha Anjaneyar can be seen.

The idol of lord Dakshinamurthy here is shown holding a stick in his hands.

In place of Dwarapalakis in Goddess Sarvajana Rakshaki’s shrine, Vinayakar idols are placed on both sides.

Idols of Vishnu, Narayani, Bairavar, Suryan, Chandran and Saneeswarar are placed in a row.

There is a separate shrine for Lord Siddhi Vinayakar at the entrance of this temple. 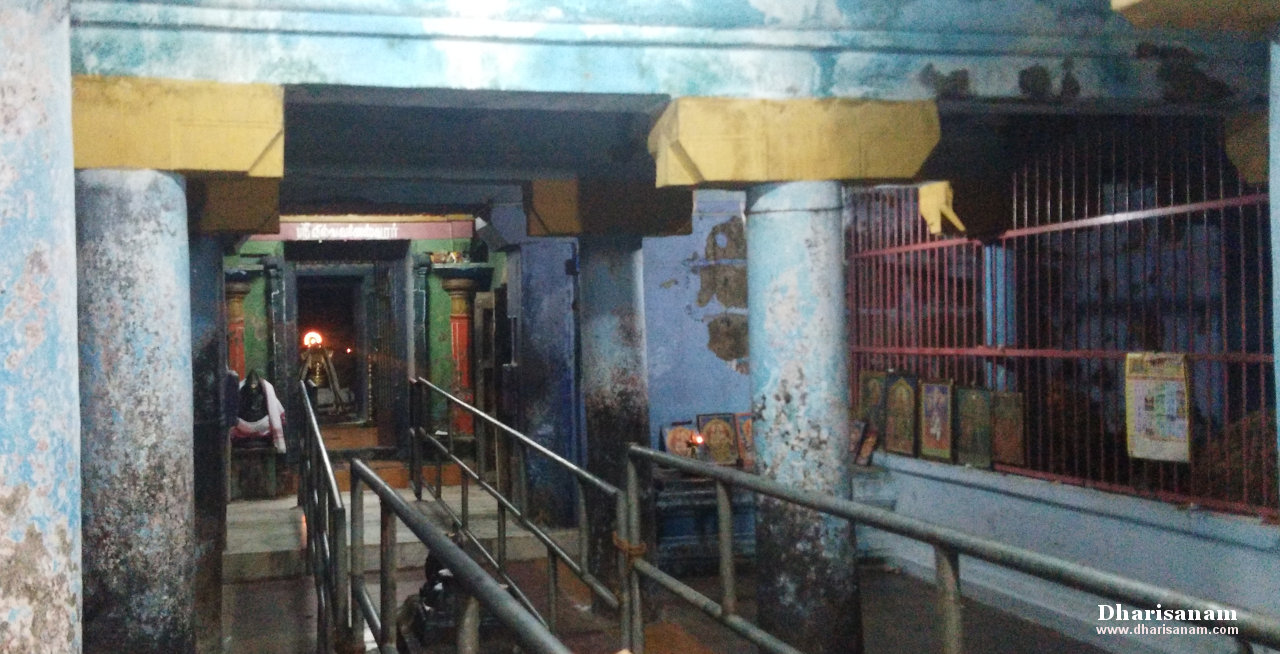 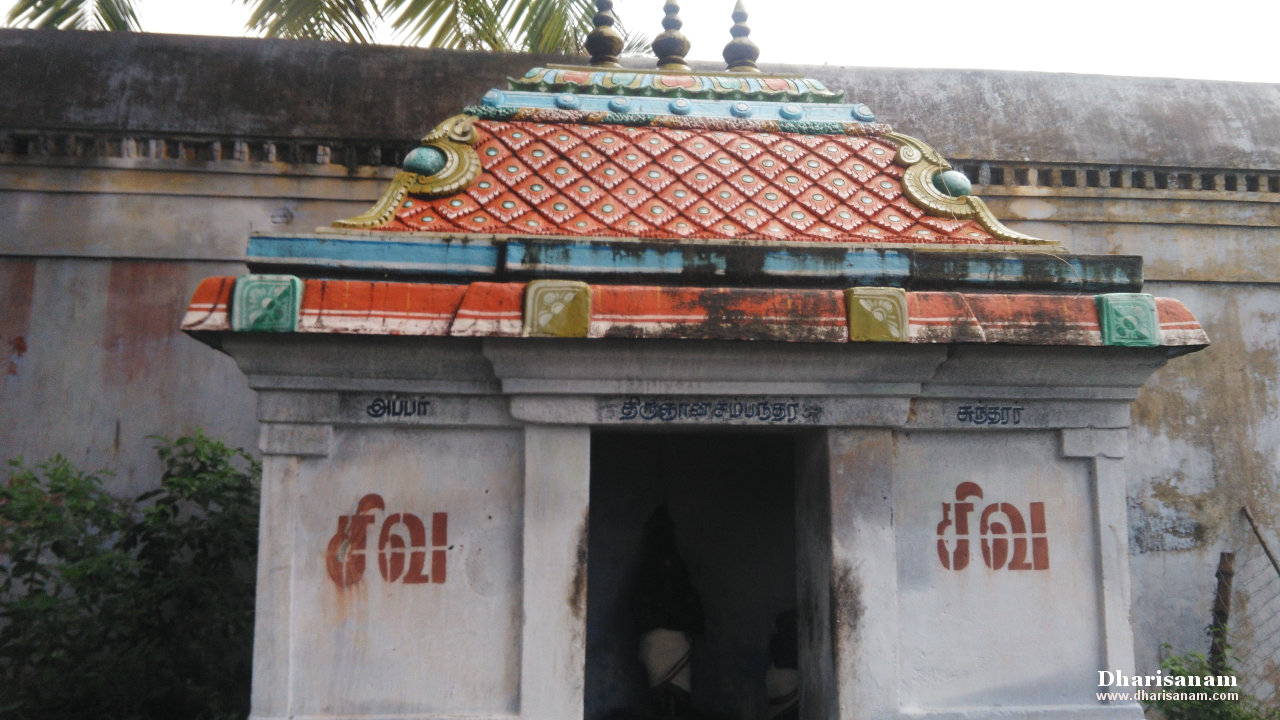 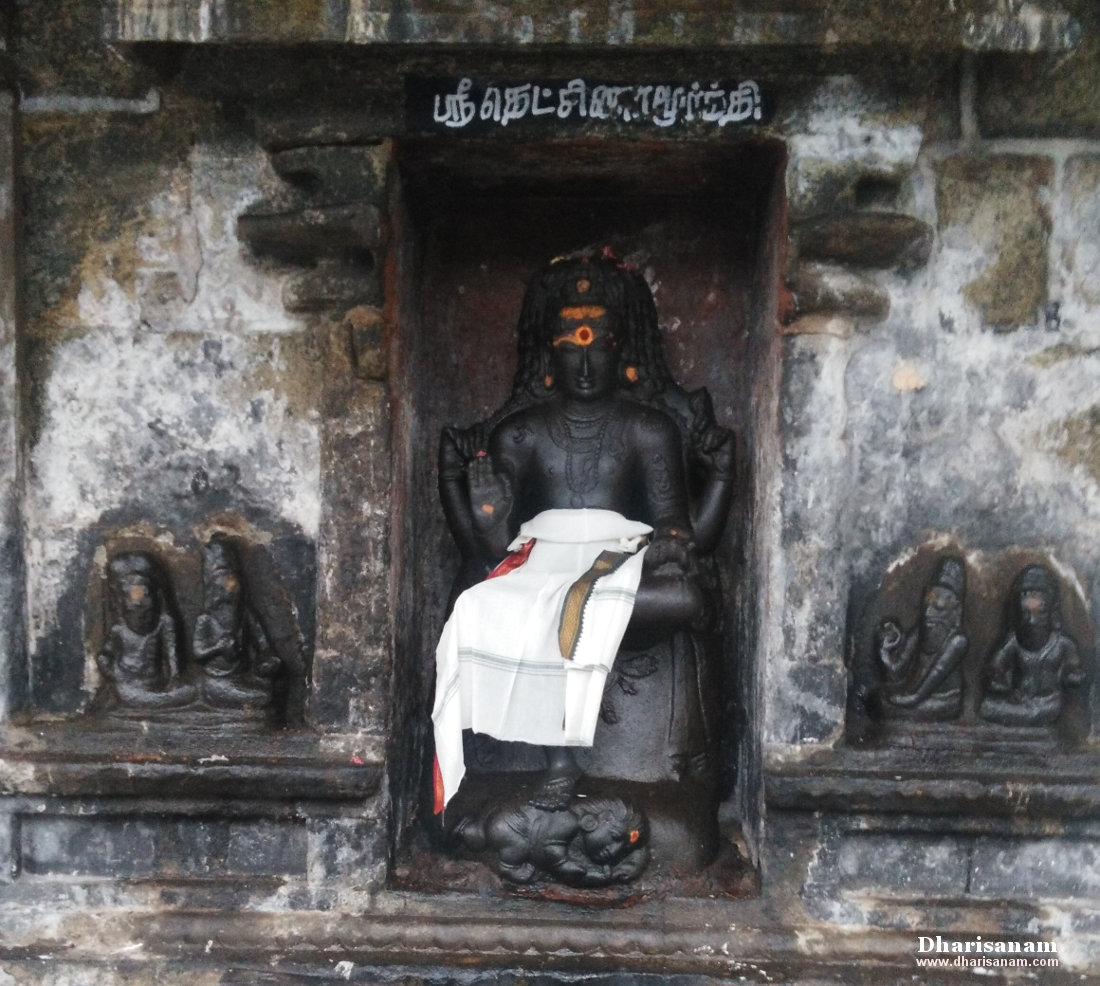 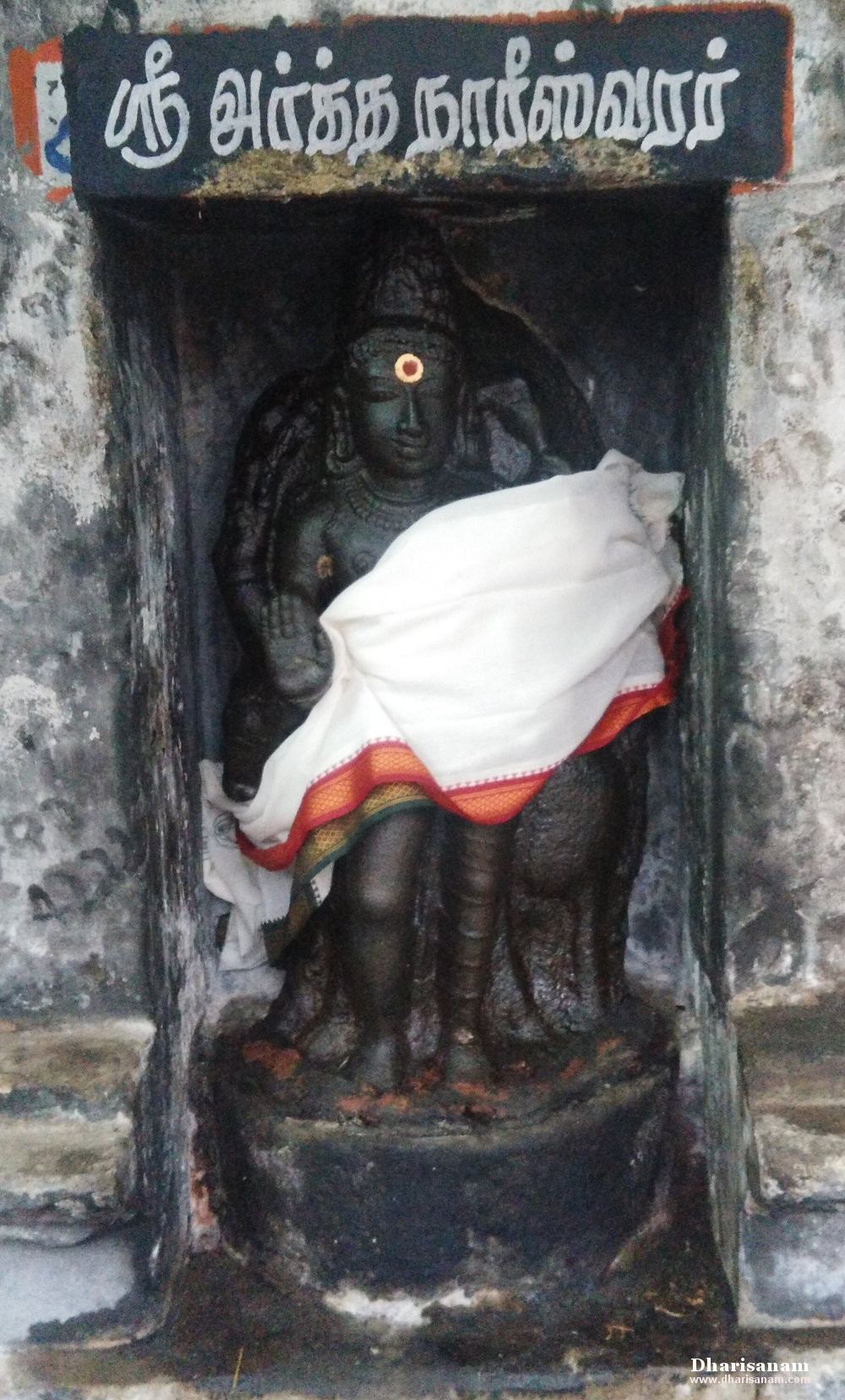 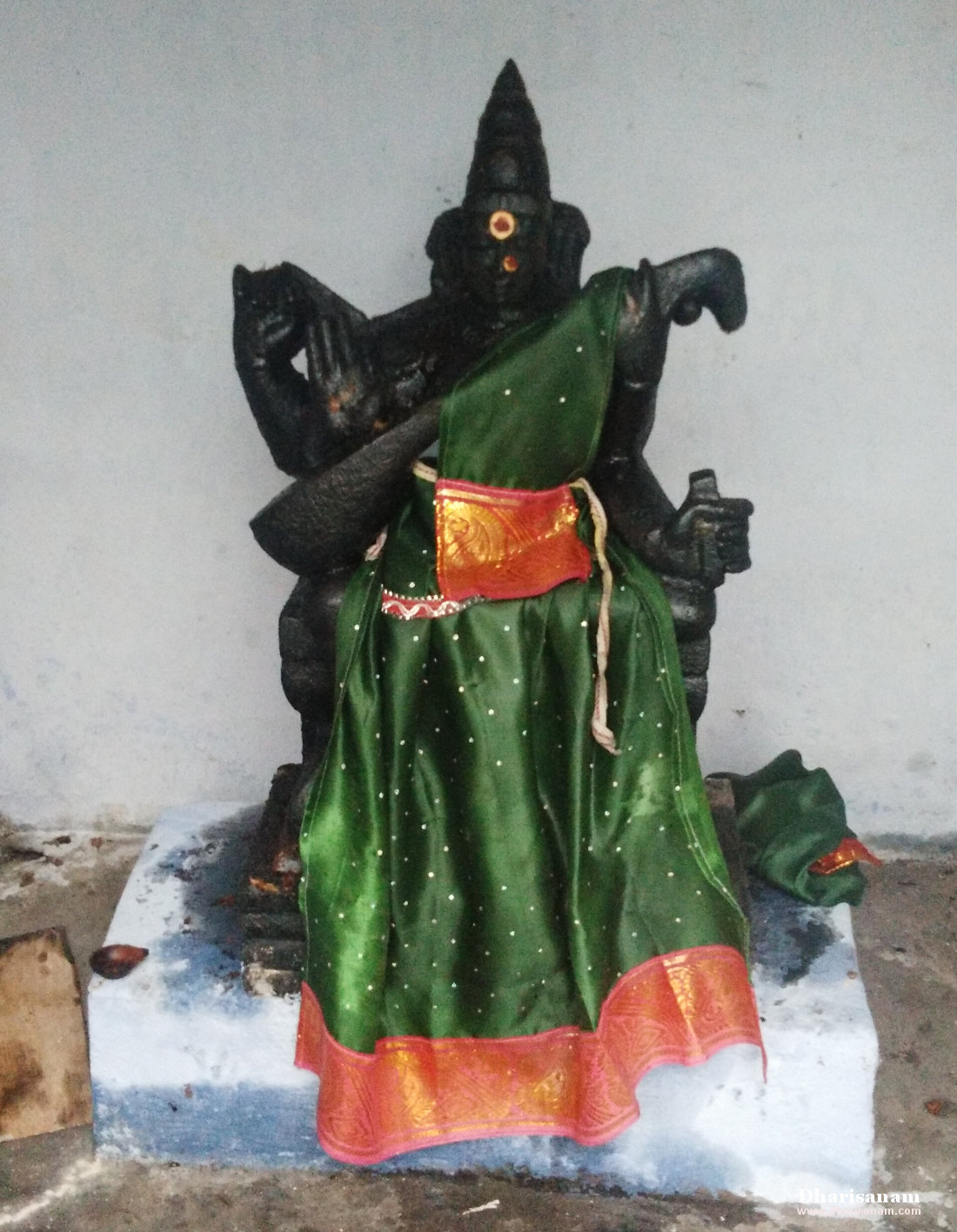 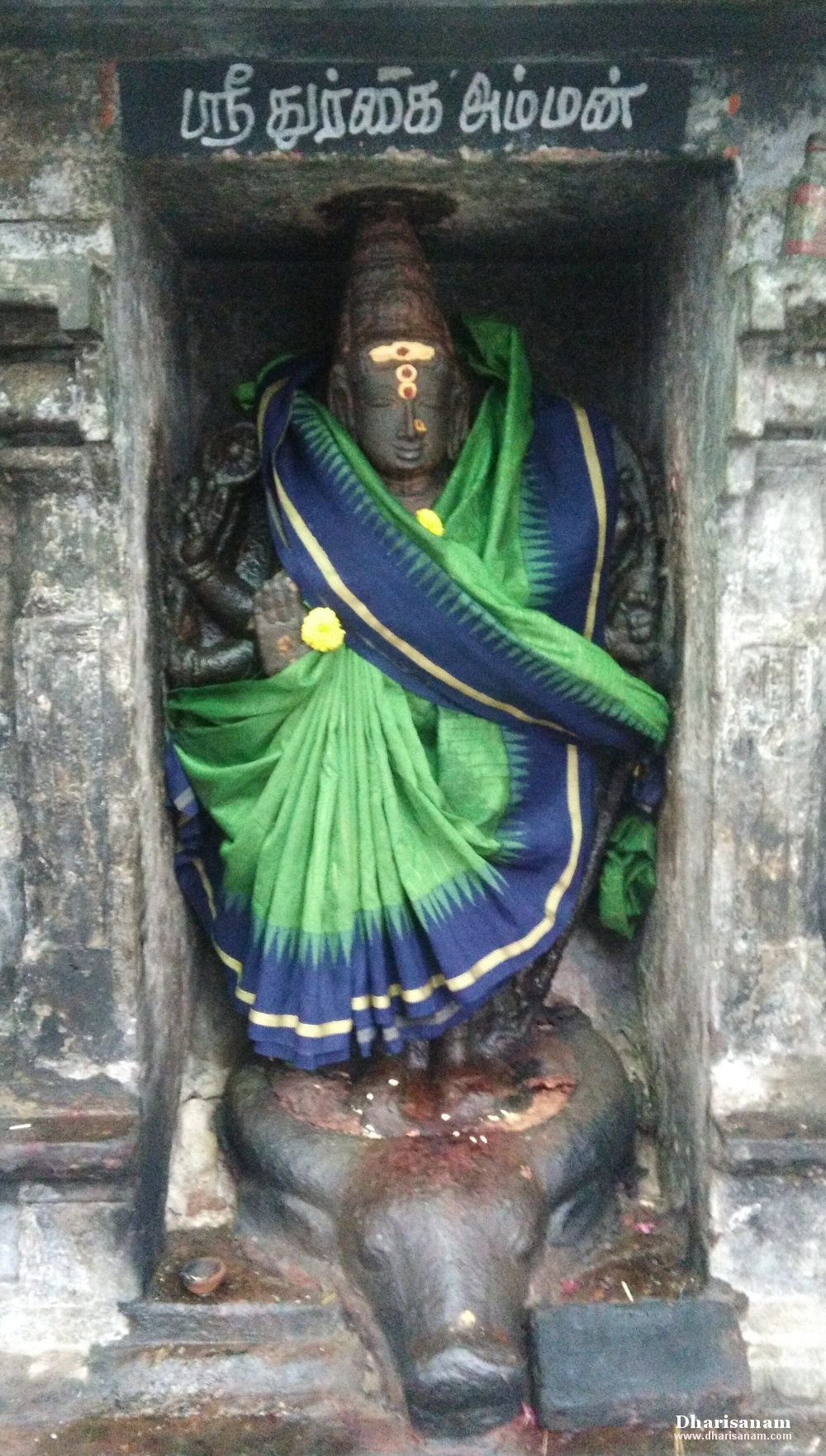 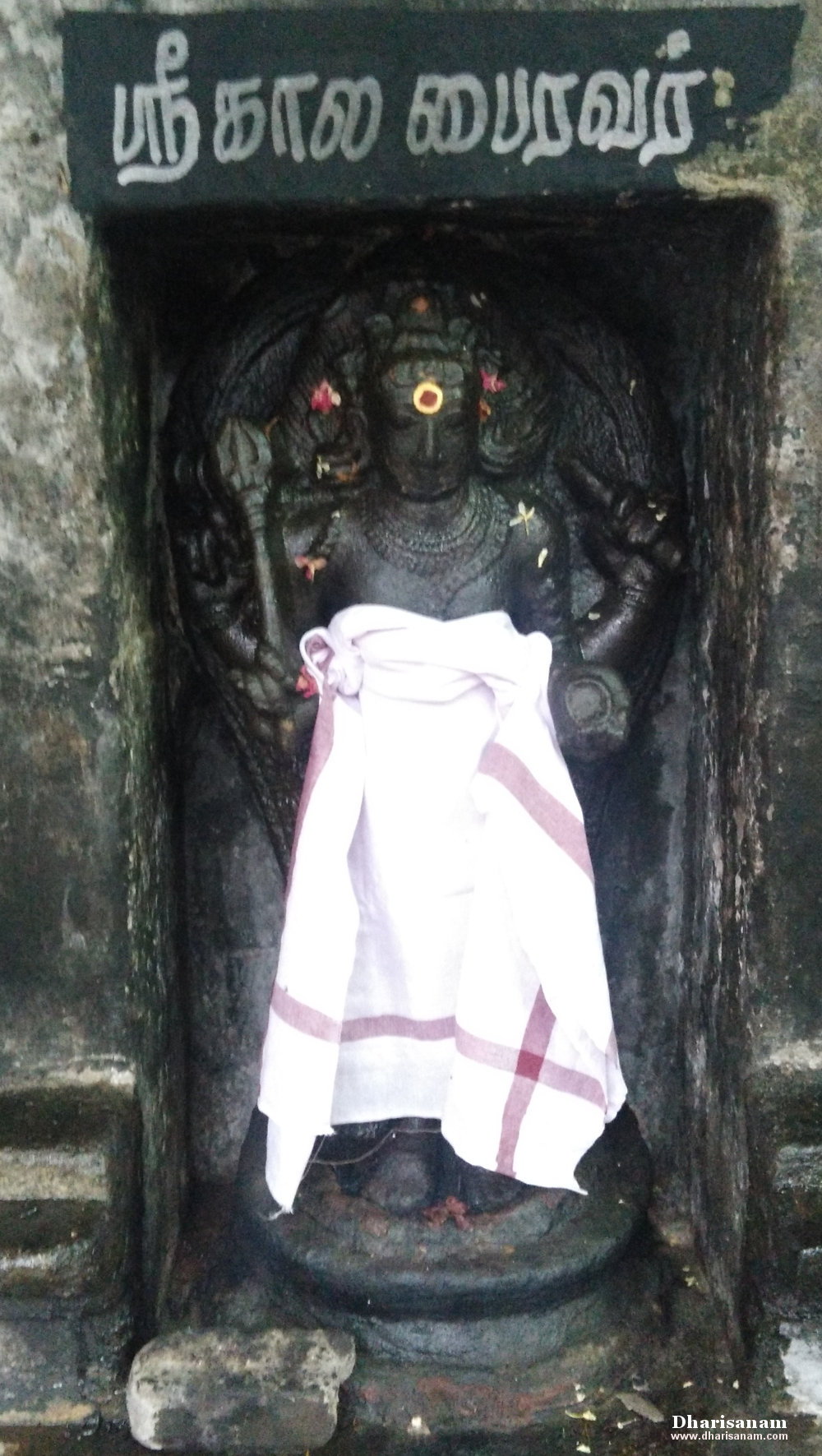 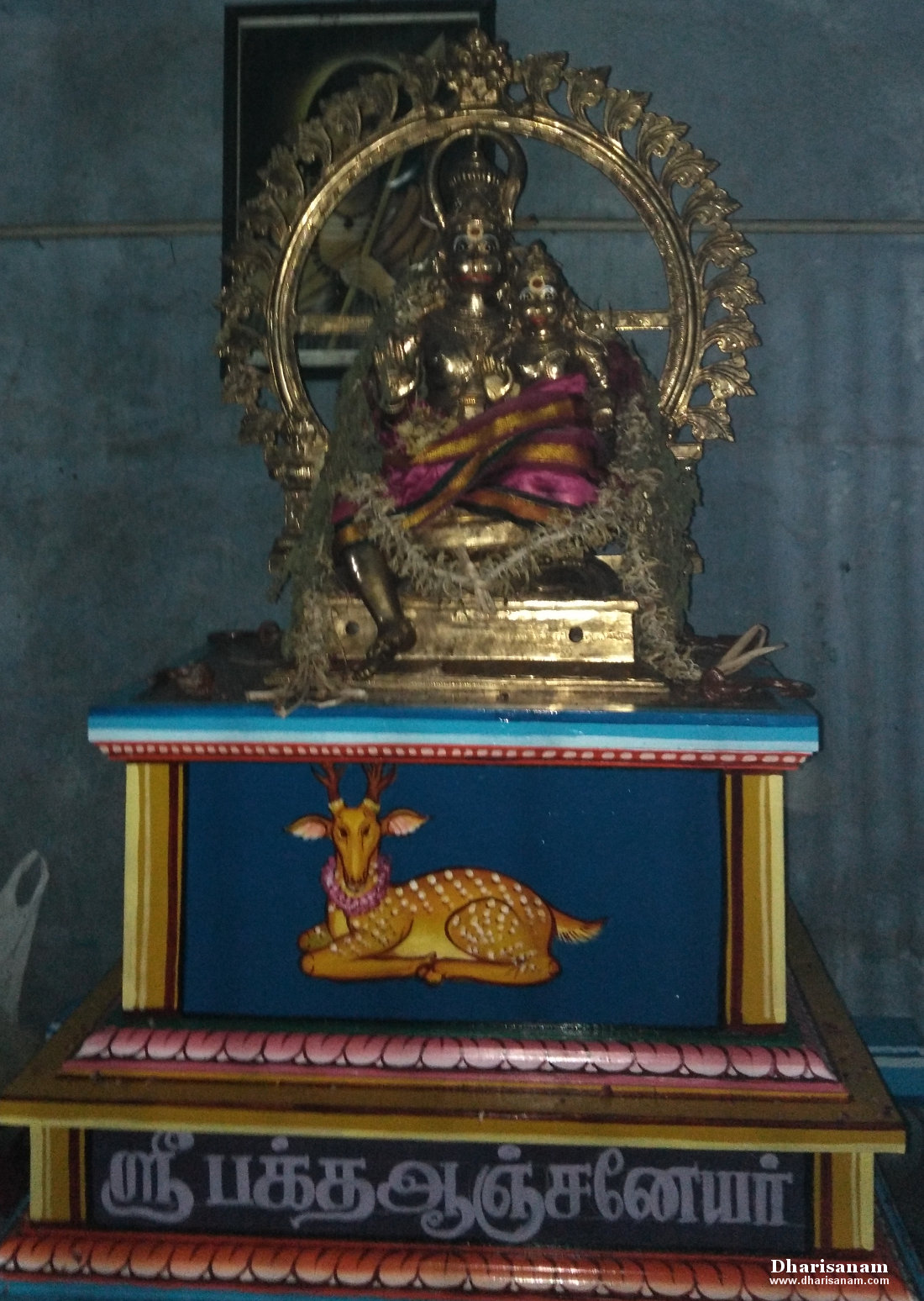 In the main hall, Lord Dakshinamurthy is seen in a standing posture with a stick in his hand. This is quite unique and such an idol cannot be seen anywhere else. Idols of Lords Vinayakar, Mahavishnu and Brahma can be seen next to him. 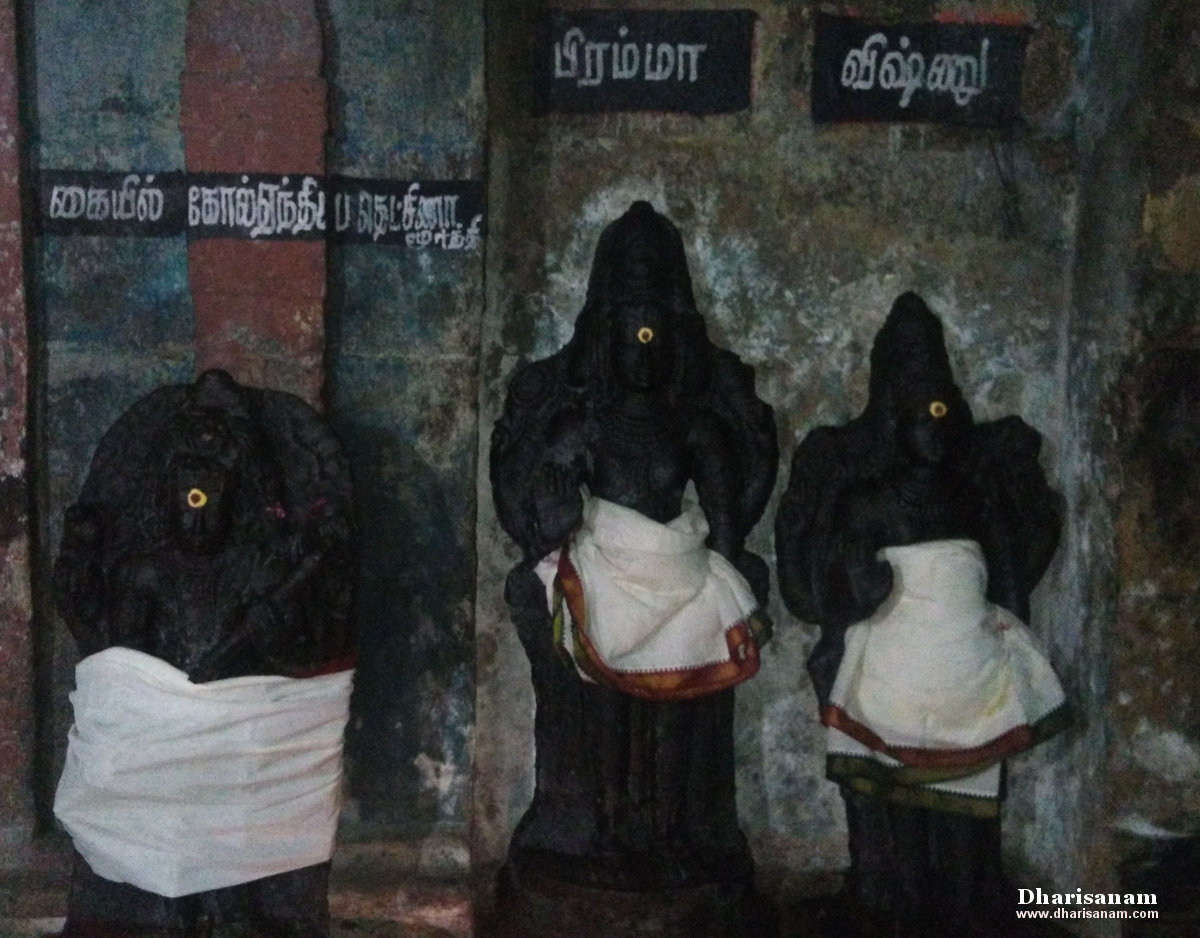 It is believed that the festival of Shivrathri originated in this temple.

At the second entrance, on the left side, beautiful sculptures depicting the legend of the hunter worshiping the lord and obtaining salvation can be seen. 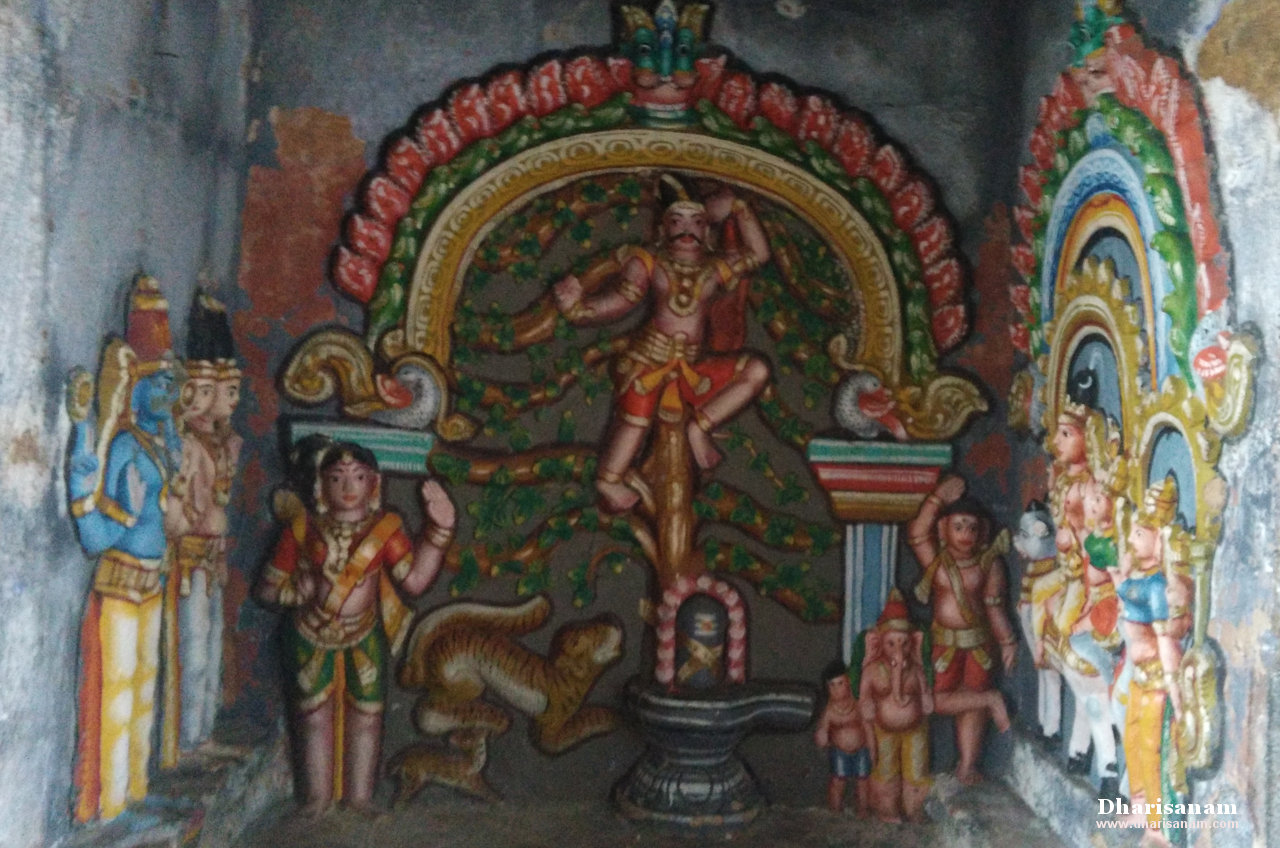 In this temple, all the idols of Nandhi have their backs facing the deities.

The idol of Lord Murugan is very beautiful. This idol has been carved out of a single stone. It depicts him with six faces, seated on his peacock mount with the sacred arc (“Thiruvatchi”) behind him. Another significant aspect is that the peacock is facing the left direction.

It is believed that there are six places where one can get relieved from the fear of death (Lord Yama) – Thirukkadayur, Thiruveezhimizhalai, Thiruvaiyaru, Thiruvenkadu, Thiruvaikavoor (this place) and Thiruvanchiyam.

Worshiping Lord Shiva here on Shivrathri days is considered to be very auspicious and doing so will yield manifold benefits.

Devotees believe that by worshiping Goddess Sarvajana Rakshaki here, their prayers will be heard and resolved.

Maha Shivrathri in the Tamil month of Masi (Feb-Mar). 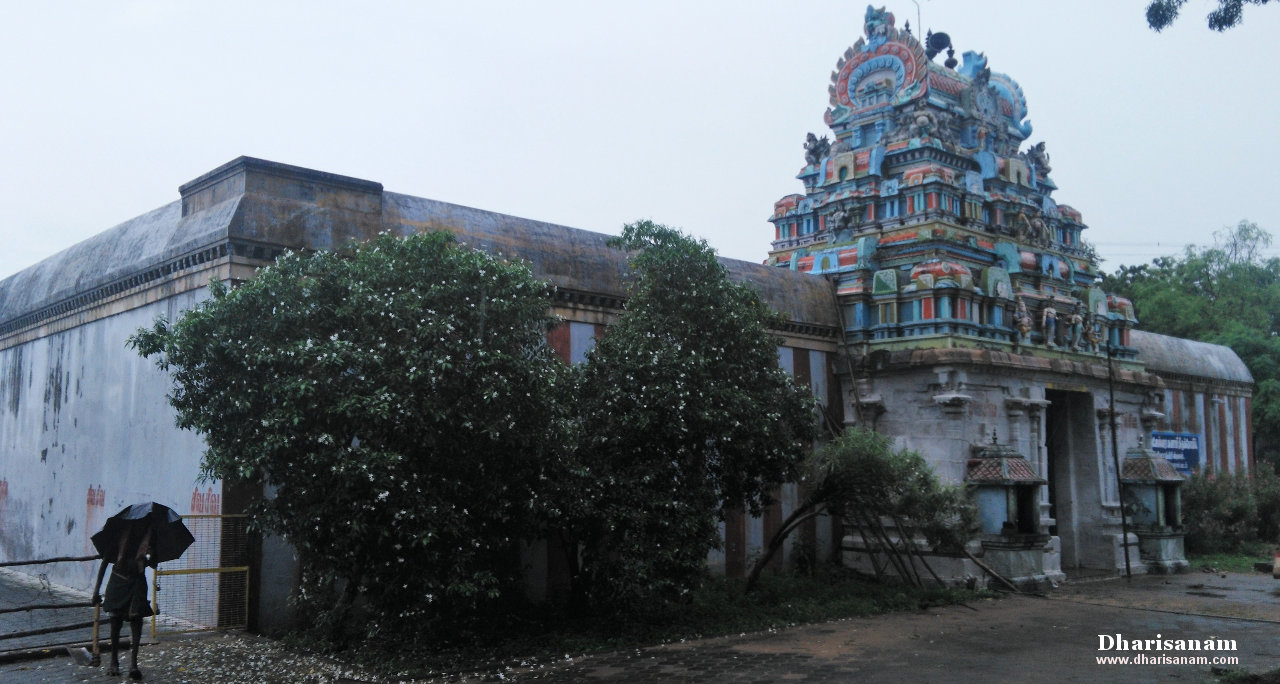 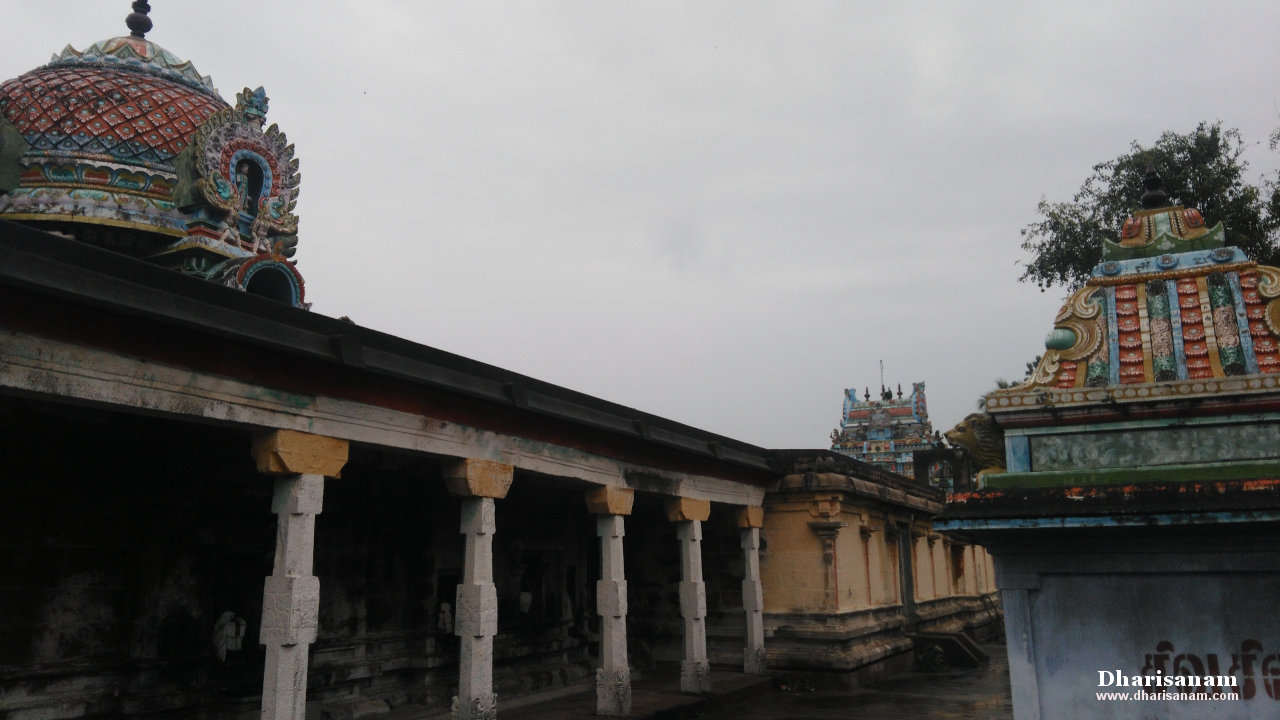 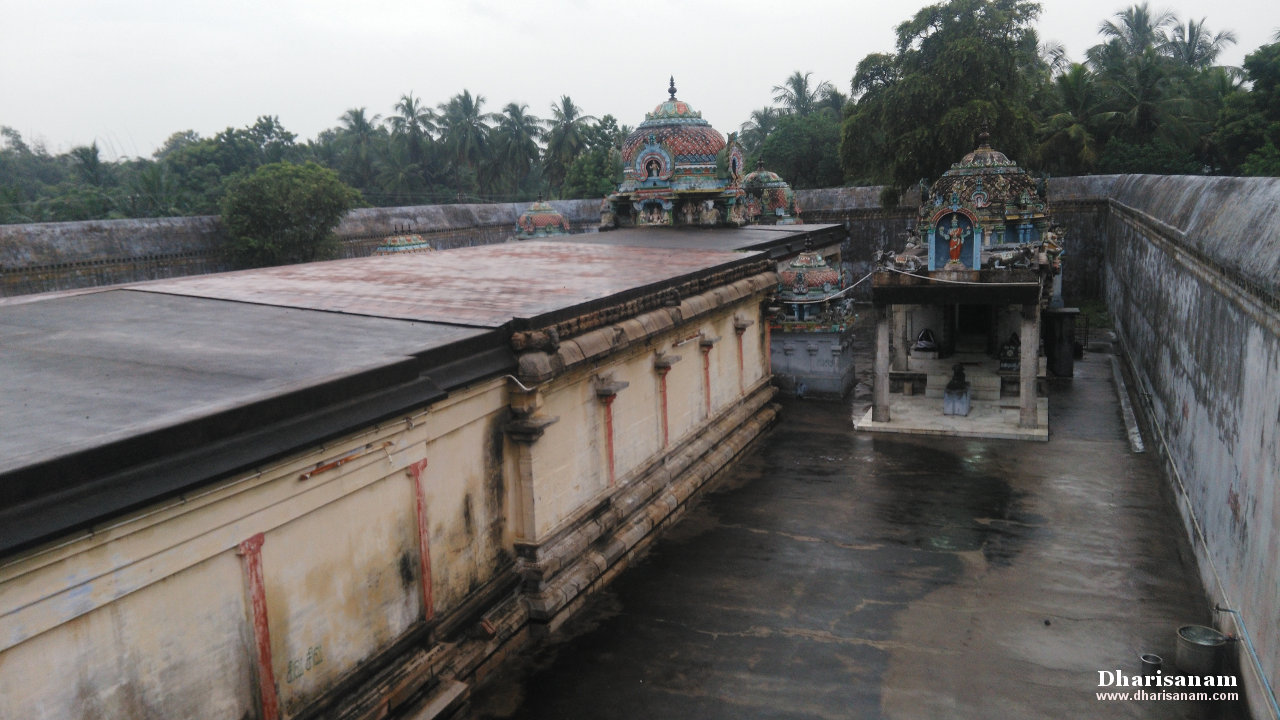