The temple is located in a place called Kizhur or Kizhaiyur in Thirukkoilure. Thirukkoilure is at a distance of about 40 kms from Thiruvannamalai and from Villupuram it is about 37 kms.

The temple is on the southern bank of Pennai river. The historical name of this place is “Andhakapuram”.

In Hindu mythology, there are eight special places where it is believed that Lord Shiva vanquished various demons and exhibited acts of bravery. These places are Veeratta Sthalams. In Tamil, this is referred to as “Atta Veerattanam” (“Atta” means eight and “Veeram” means bravery). Thirukkovilur is the second Veerattana Sthalam where the lord is believed to have vanquished the demon Andhakasuran. The other seven Veeratta Sthalams are –

This is the place where Lord Shiva destroyed the demon Andhakasura. Of the eight Veeratta sthalas, this is the second one and it has significant historical importance and antiquity. In this temple’s sanctum sanctorum, Lord Shiva is seen as Bairavar.

It is believed that, once while playing with Lord Shiva, Goddess Parvathi covered his eyes. Since the lord’s eyes are believed to be Sun and Moon, covering them turned the world dark. It is believed that this darkness took the form of a demon called “Andhakasuran”. “Andha” means darkness and also ignorance. This demon obtained a lot of powers from Lord Shiva after rigorous penance. Emboldened by his powers, he started troubling the devas in the celestial world. They went to Lord Shiva to seek his intervention. Lord Shiva struck Andhakasuran on his head with his trident. The head of the demon began to bleed. Every drop of blood that fell on earth grew into another demon and this lead to a war between the demons and Lord Shiva. Goddess Parvathi prevented the blood from falling down by collecting it in a bowl. But before she could so, some of it fell down to the earth in the form of 8 vertical and 8 horizontal lines and thus made 64 squares. With his power, Lord Shiva created 64 Bhairavas – one for each square and prevented further production of demons.

It is believed that Sukrachariar, leader of the demons, created many more demons to aid Andhakasuran in his fight with Lord Shiva.  Lord Shiva punished Sukrachariar by swallowing him. Sukrachariar then realized his mistake and pleaded to the lord for forgiveness. Lord Shiva took pity on him, gave him rebirth and blessed him with a place among the Navagrahas as Sukran.

It is believed that Lord Shiva struck Andhakasuran with his trident and lifted him off the ground. It is significant to note that this kind of killing is unique to this Veeratta Sthalam because in other seven places Lord Shiva vanquished the demons by pinning them to the ground. 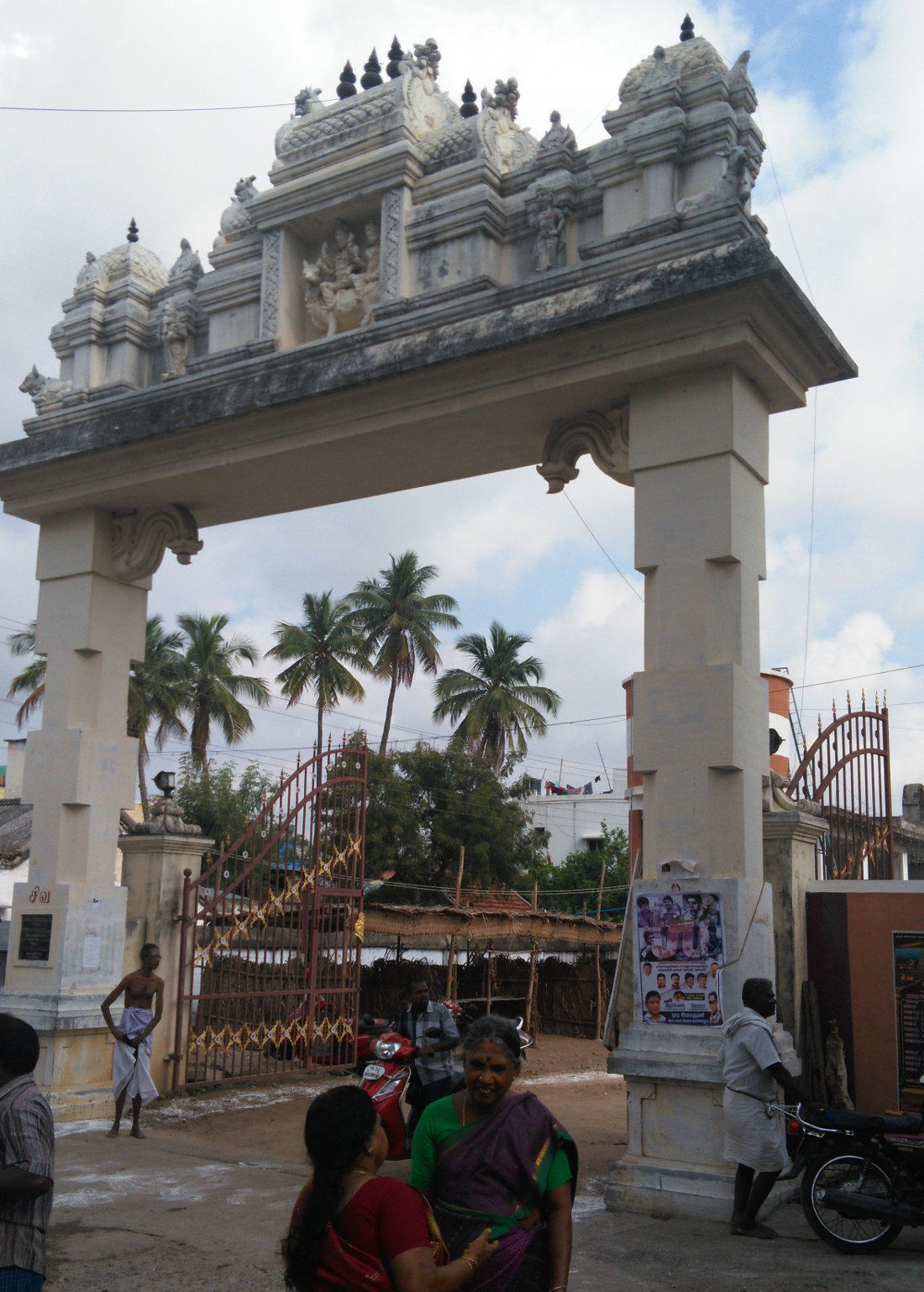 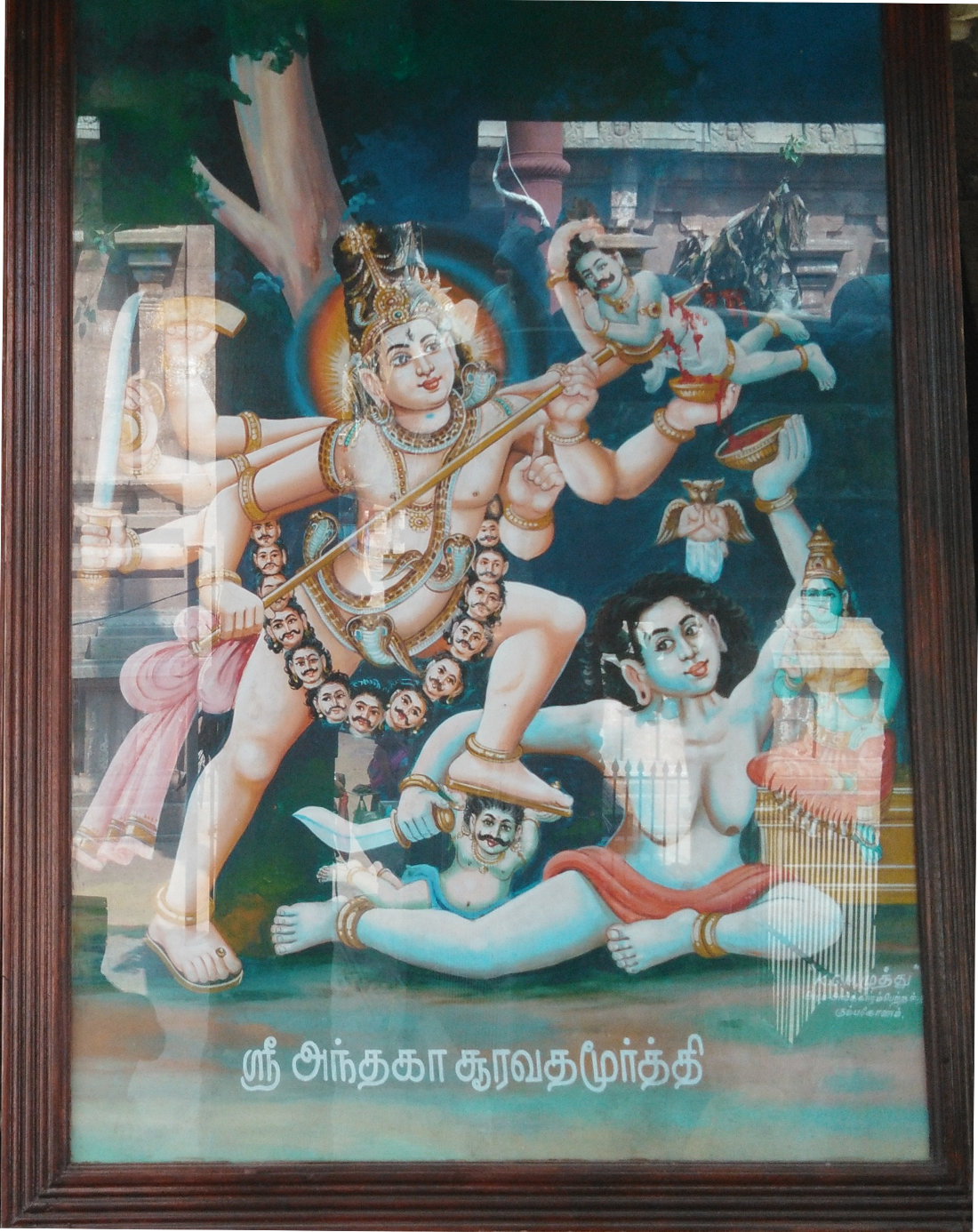 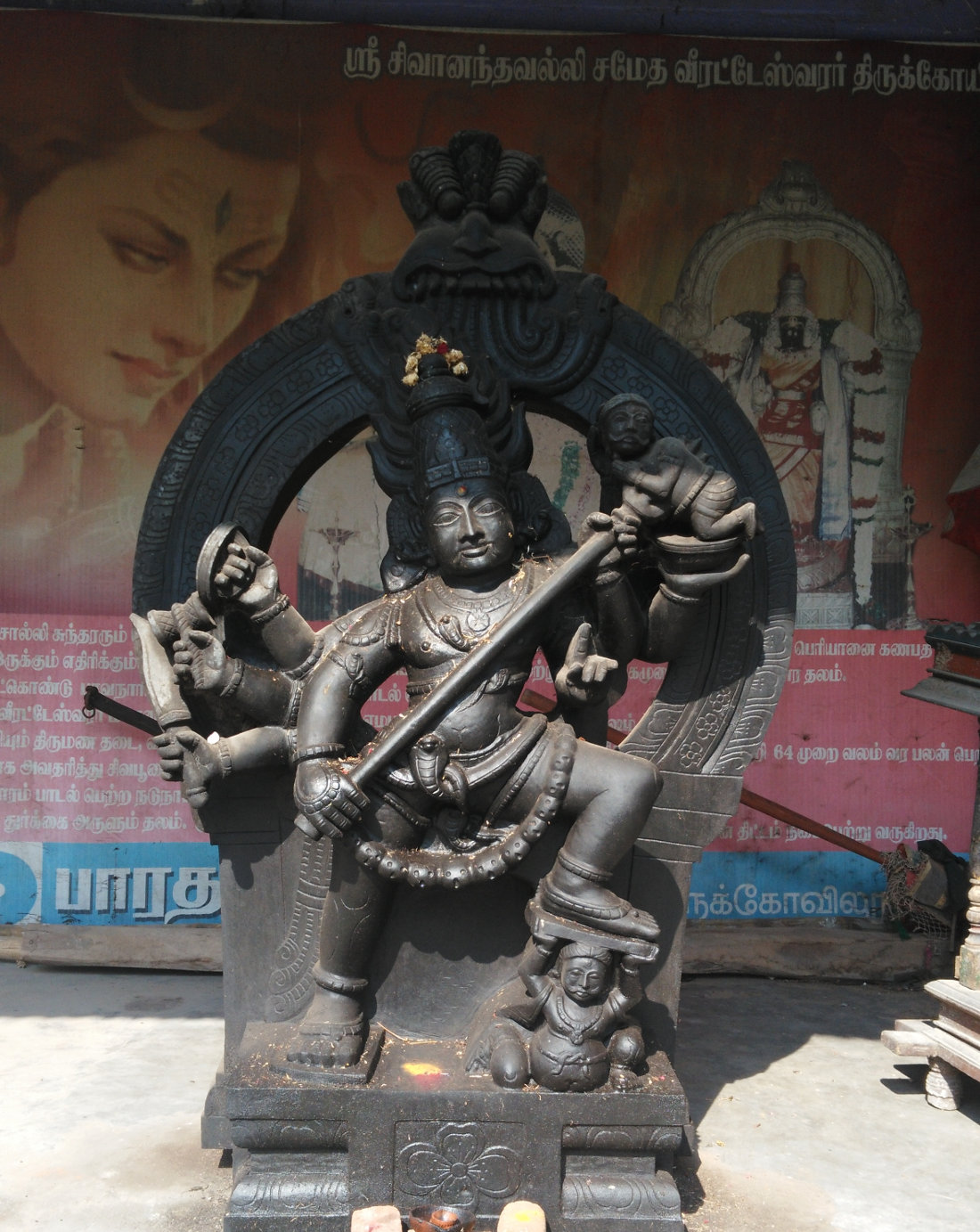 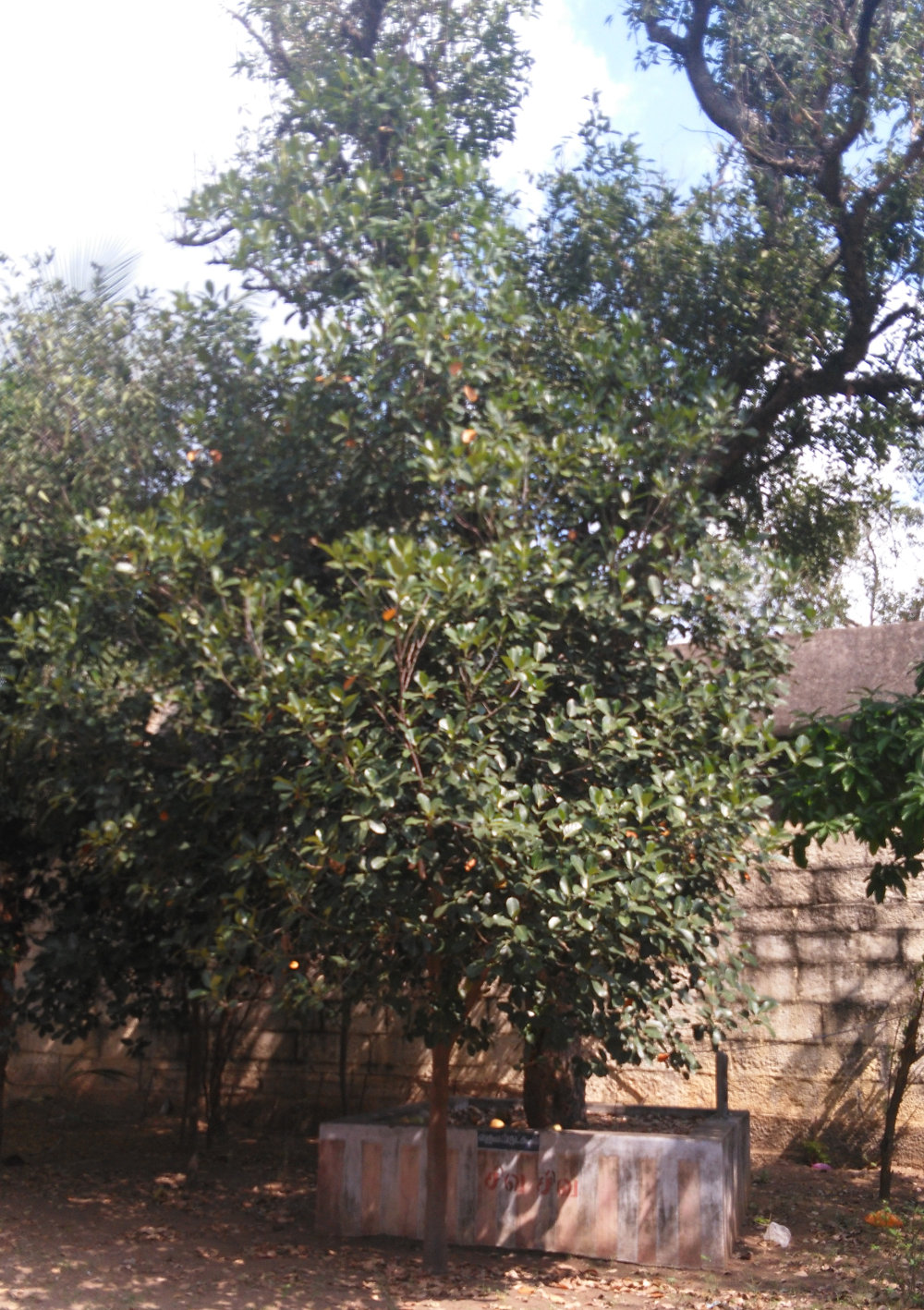 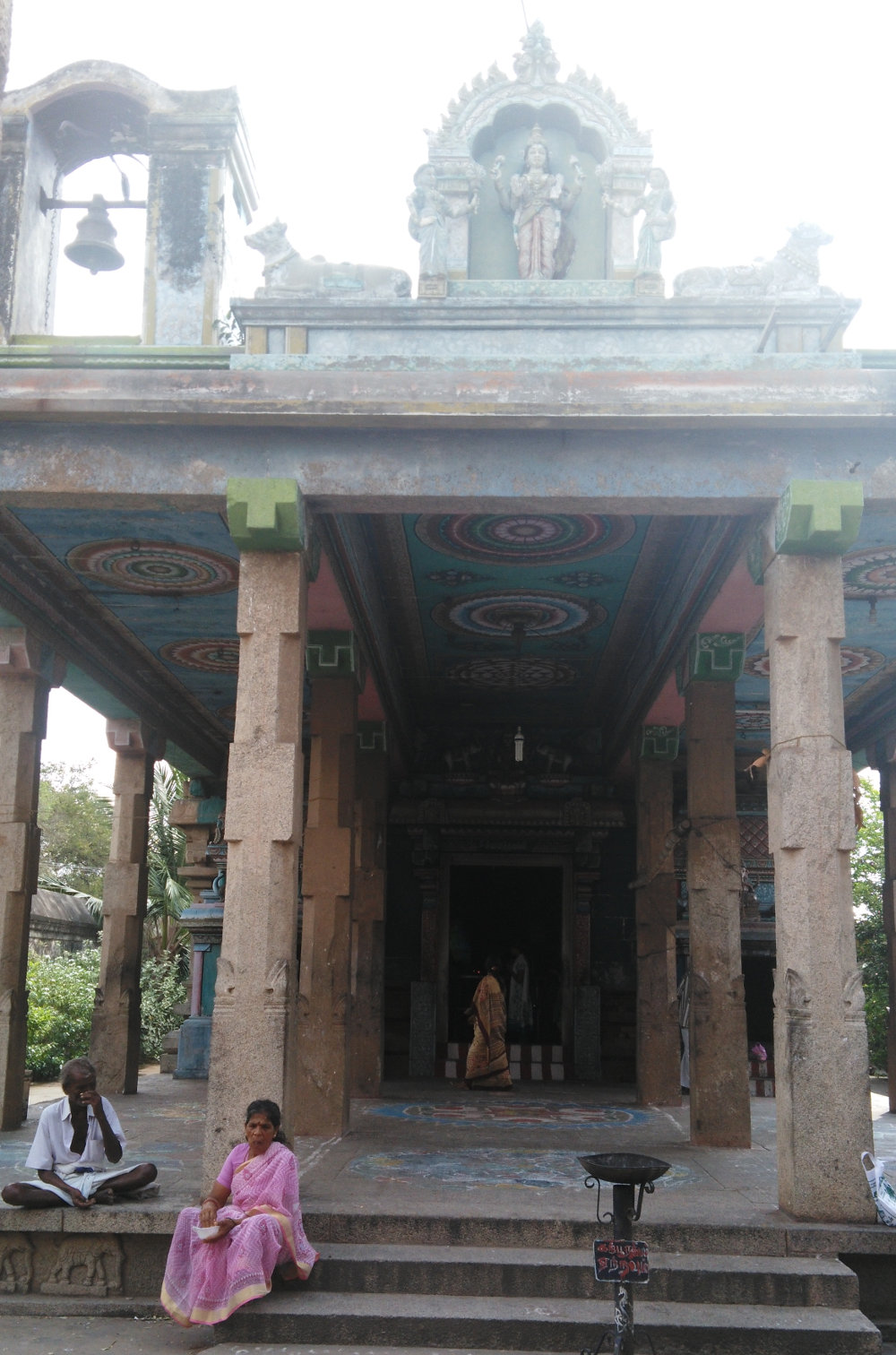 The origin of Vasthu Sastra (the traditional Hindu system of architecture) can be traced back to this place. It is believed that while fighting the demon Andhakasuran, Lord Shiva started sweating profusely. His sweat took the form of a man called Vastu Purusha. A stone sculpture depicting Vastu in his sleeping posture can be seen in the wall of the sanctum sanctorum.

Another legend associated with this temple is that the Periyanai Ganapathi’s shrine is believed to have been worshipped by the renowned poet-saint Avvaiyar. Avvaiyar has sung the famous “Vinayakar Agaval” dedicated to Vinayakar of this temple.

While offering her prayers to Lord Ganesha of this temple, Avvaiyar divined an image of Saint Sundaramurthy Nayanar and his contemporary King Cheraman Perumal going to Mount Kailash. She wanted to join them and tried to hasten her worship. Lord Ganesha blessed her with his appearance and advised her that there was no need for her to hasten her worship and that he himself would take her to Kailash (Kailayam). It is believed that Lord Ganesha then took his universal form (“Vishwaroopam”), lifted Avvaiyar up with his trunk and placed her ahead of Saint Sundarar on the route to Mount Kailash. As he took his universal form here, Lord Ganesha here is also praised as Periya Yanai (“periya” meaning huge and “Yanai” meaning elephant in Tamil). Beautiful reliefs depicting this story can be seen on the walls next to the Periyanai Ganapathi’s shrine. 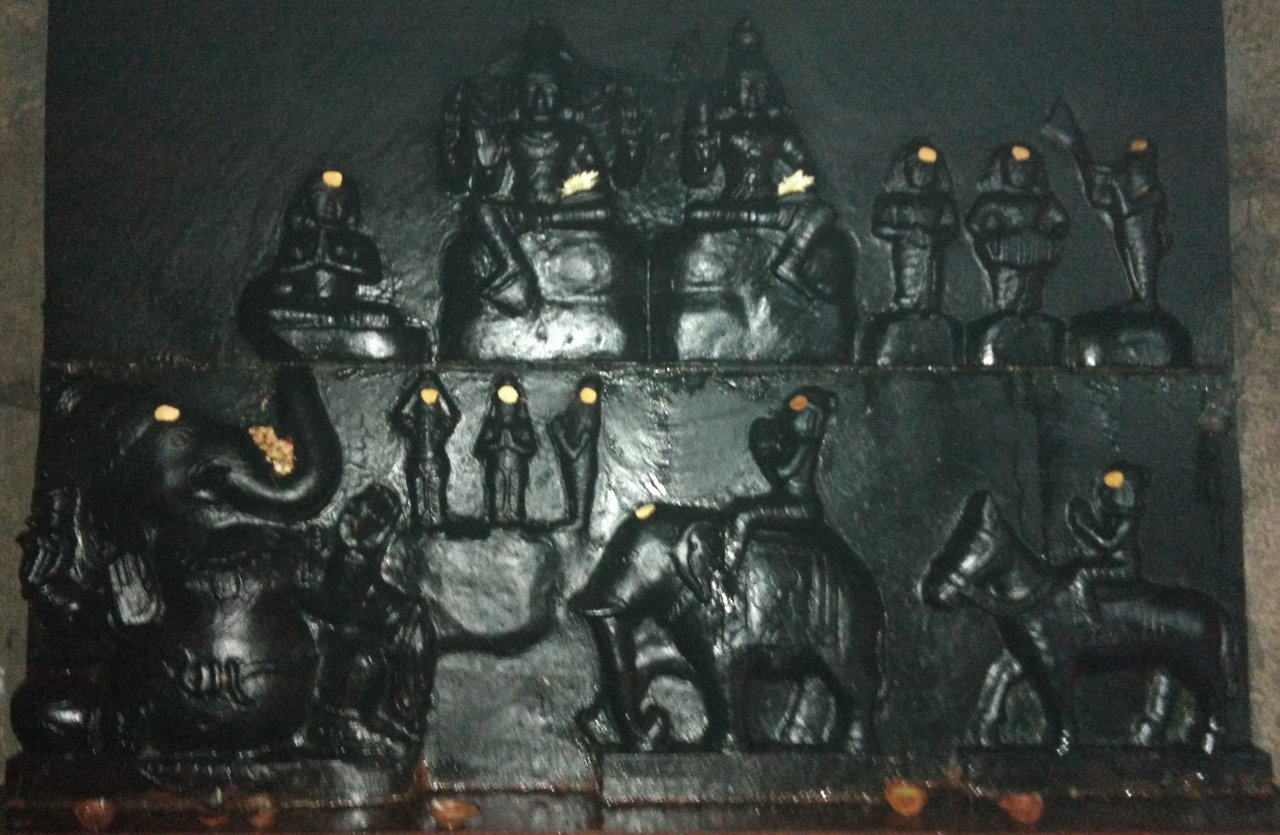 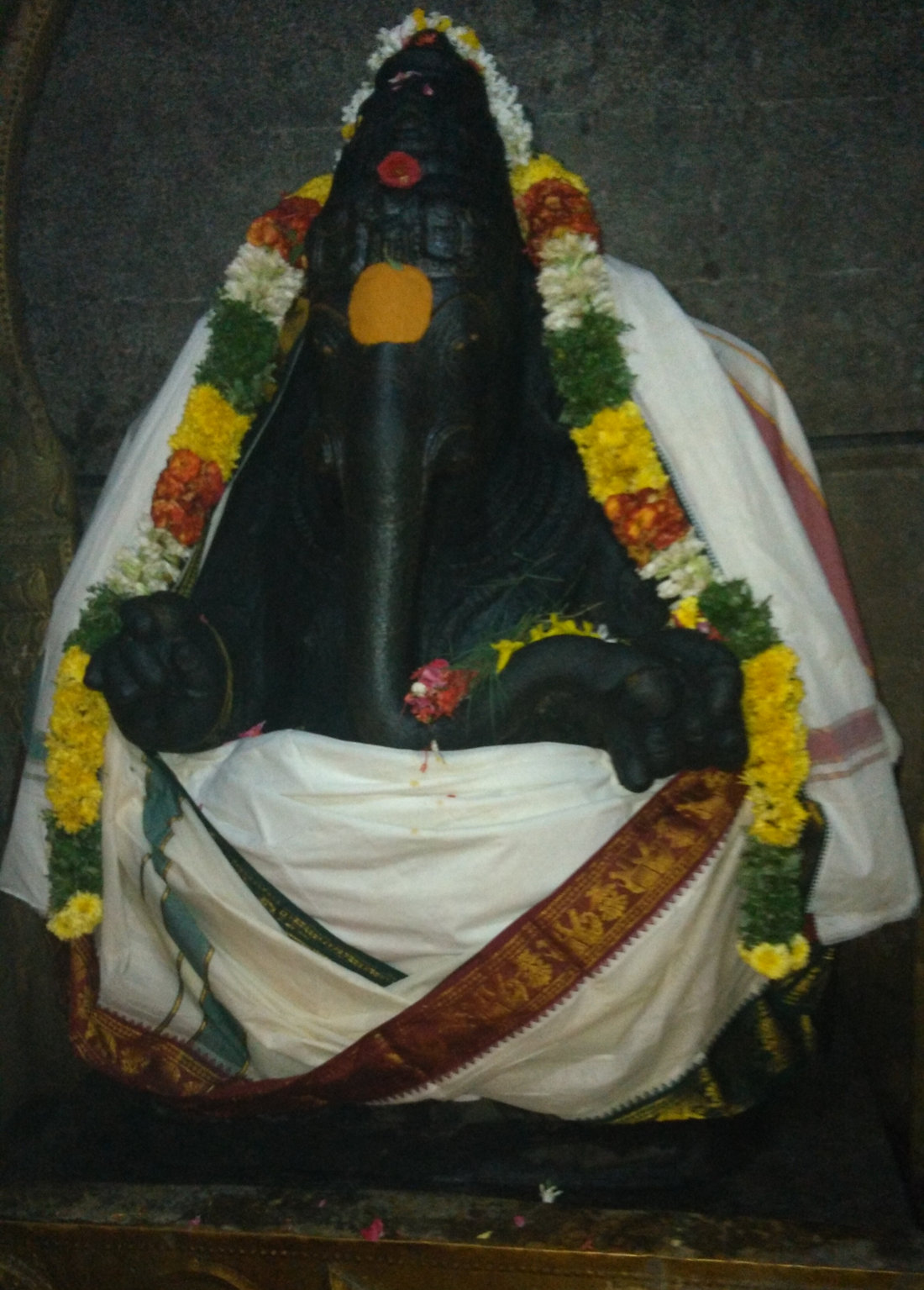 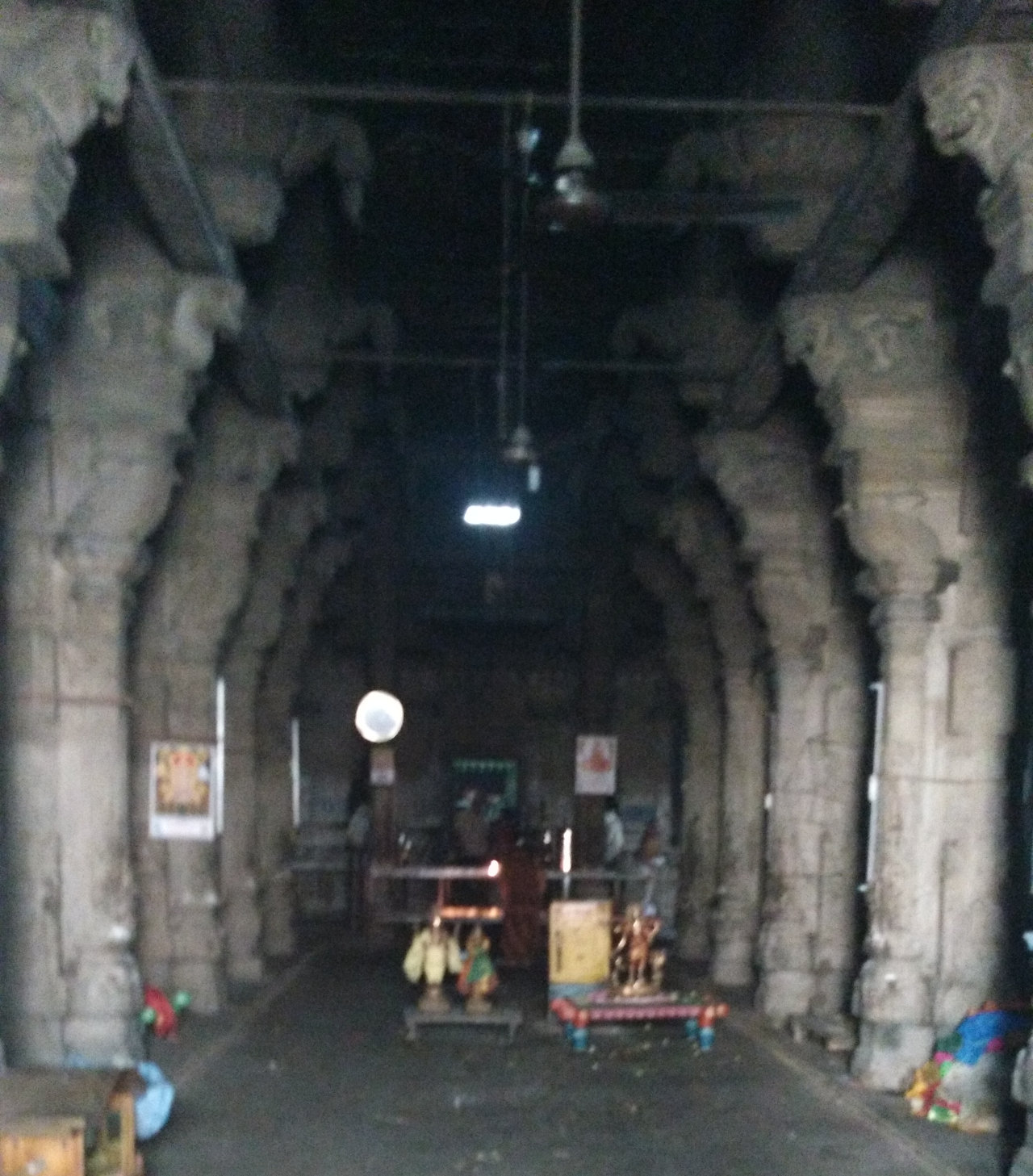 Procession idol of Lord Andhakaanthakan depicts him with his trident in his hands. Such depiction of Lord Shiva is unique to this procession idol.

There is a separate shrine for saint Meipporul Nayanar near the entrance of this temple. 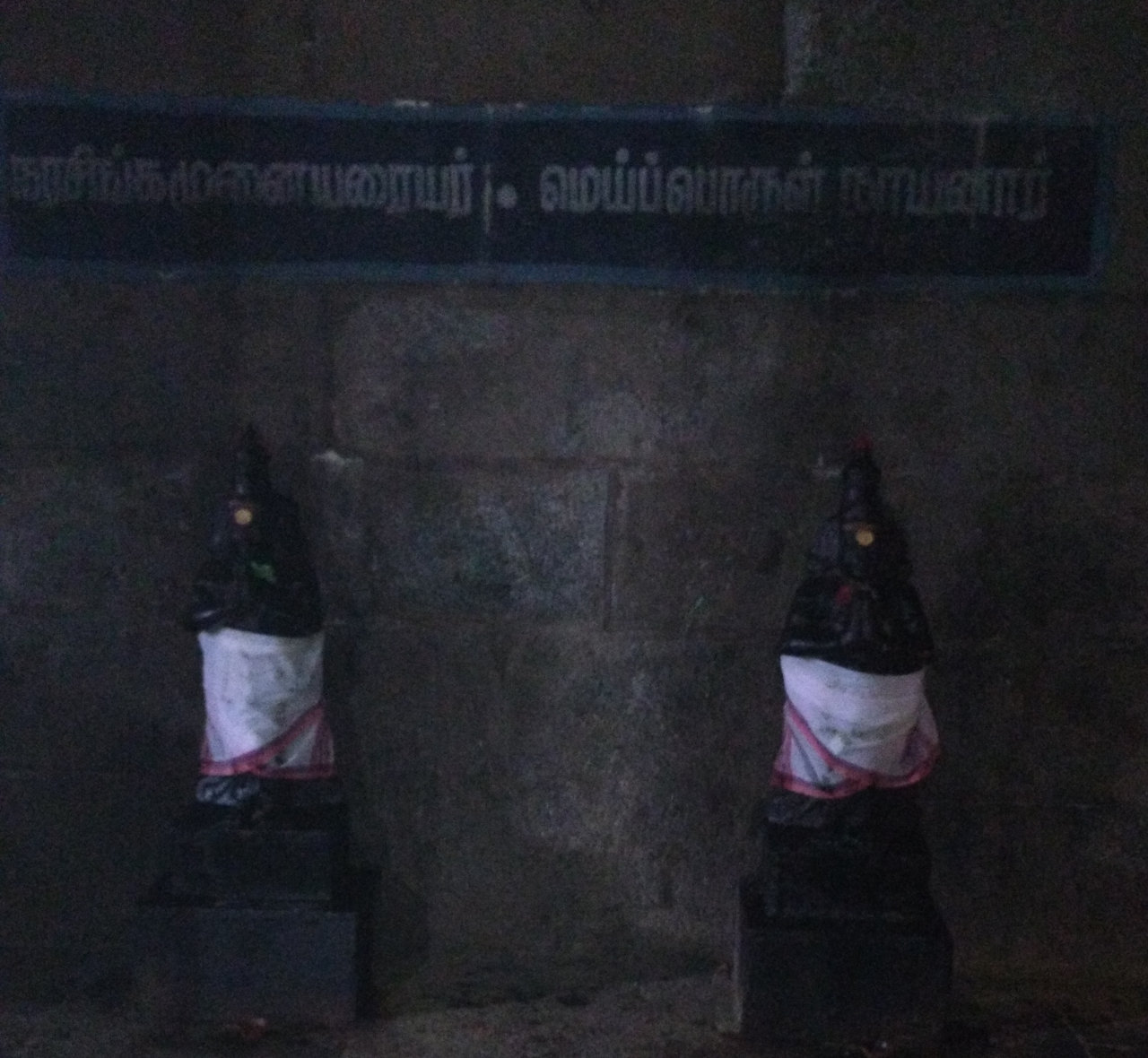 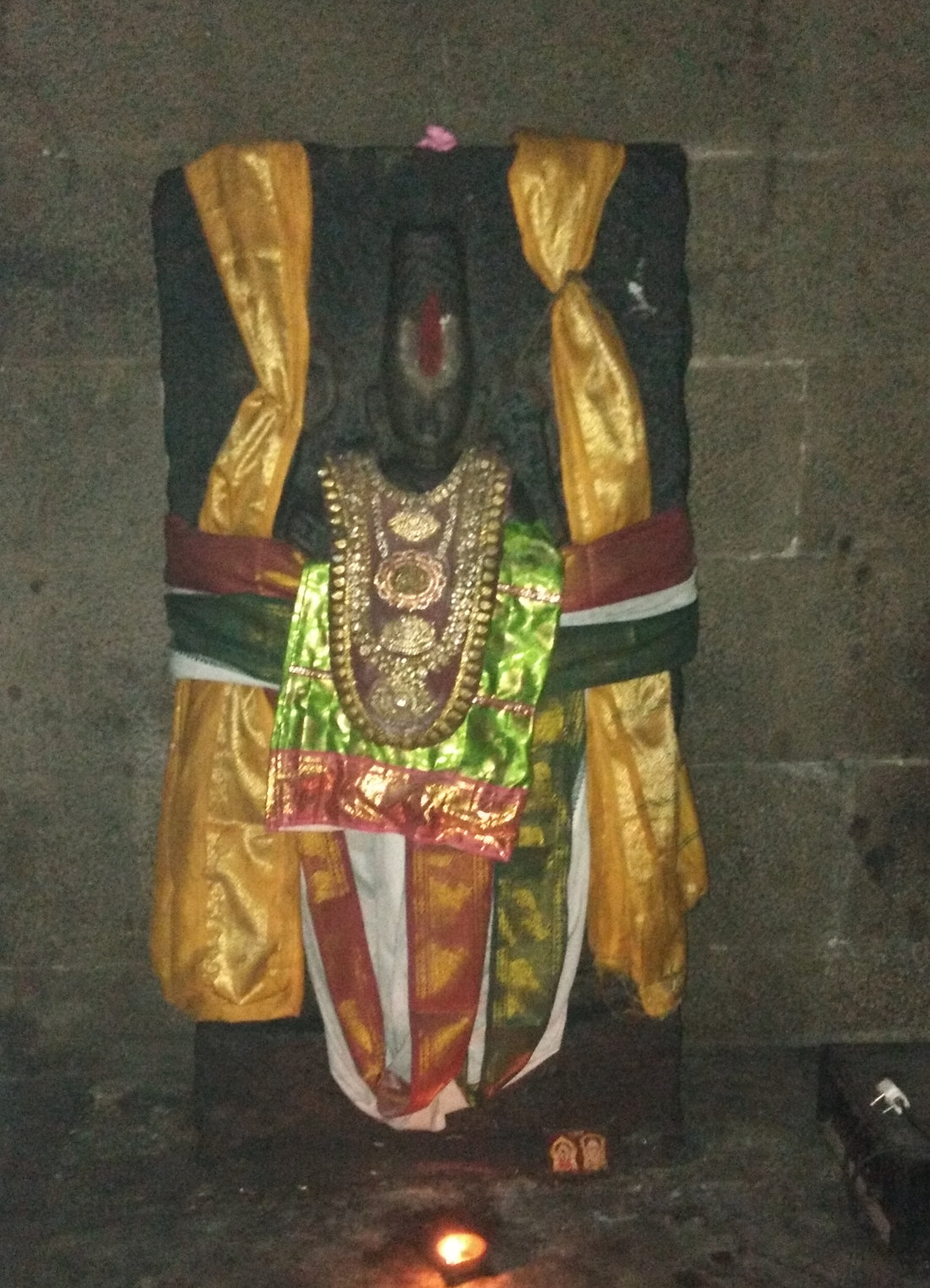 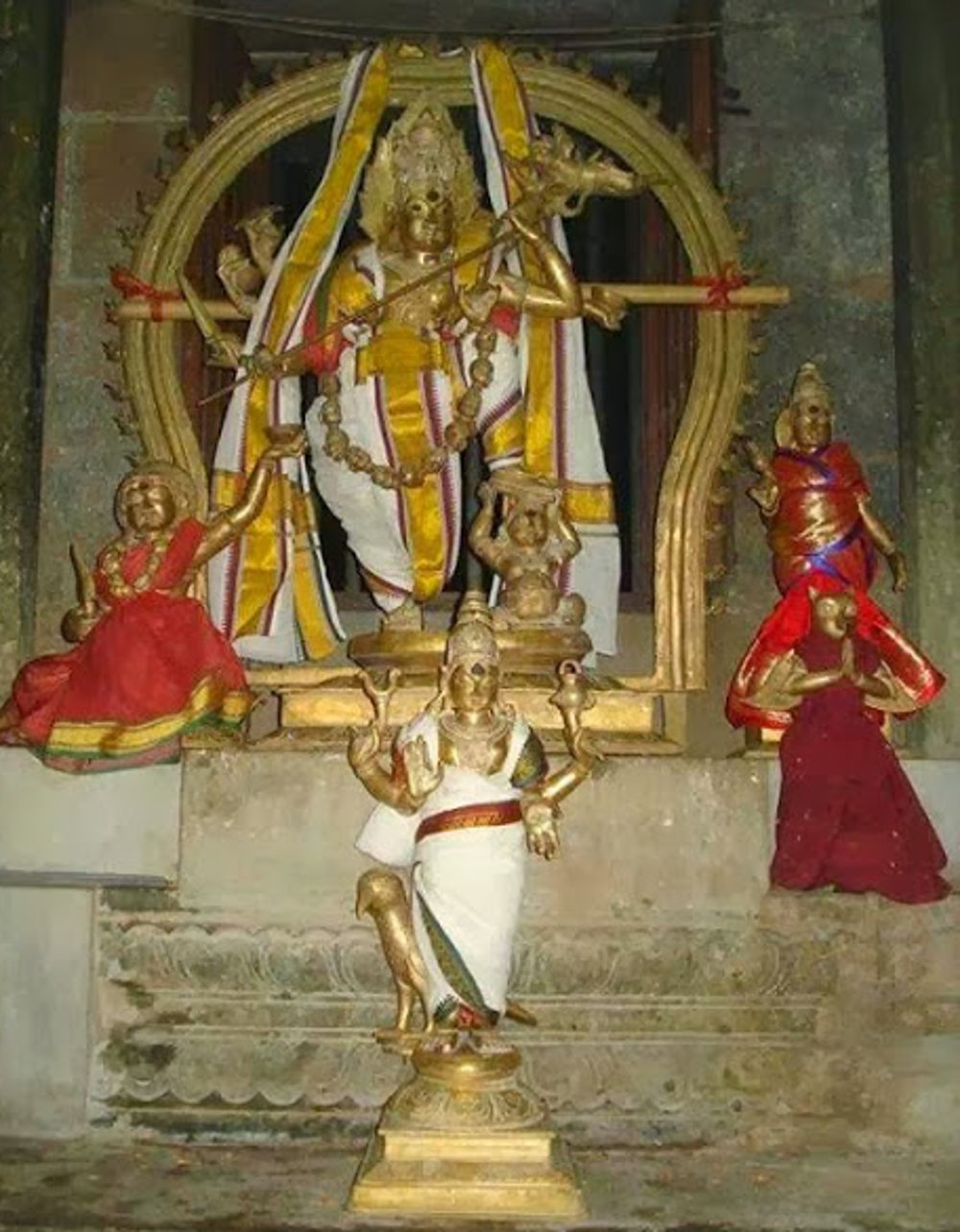 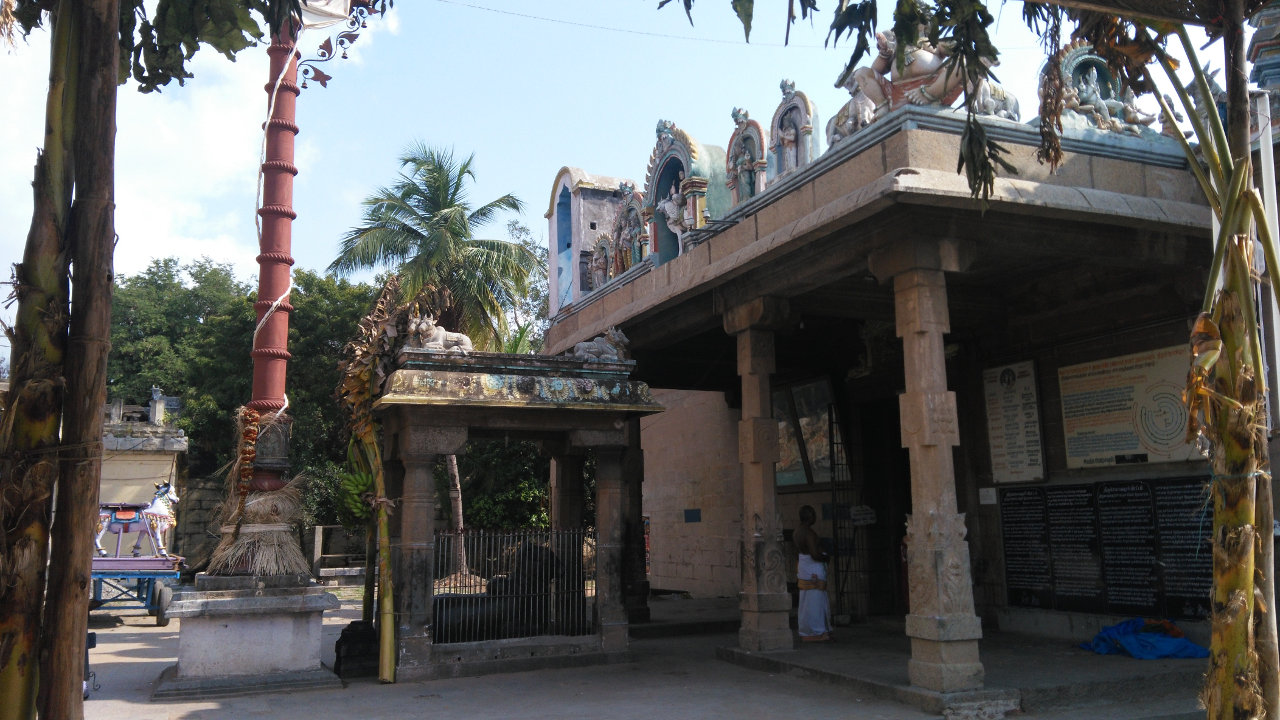 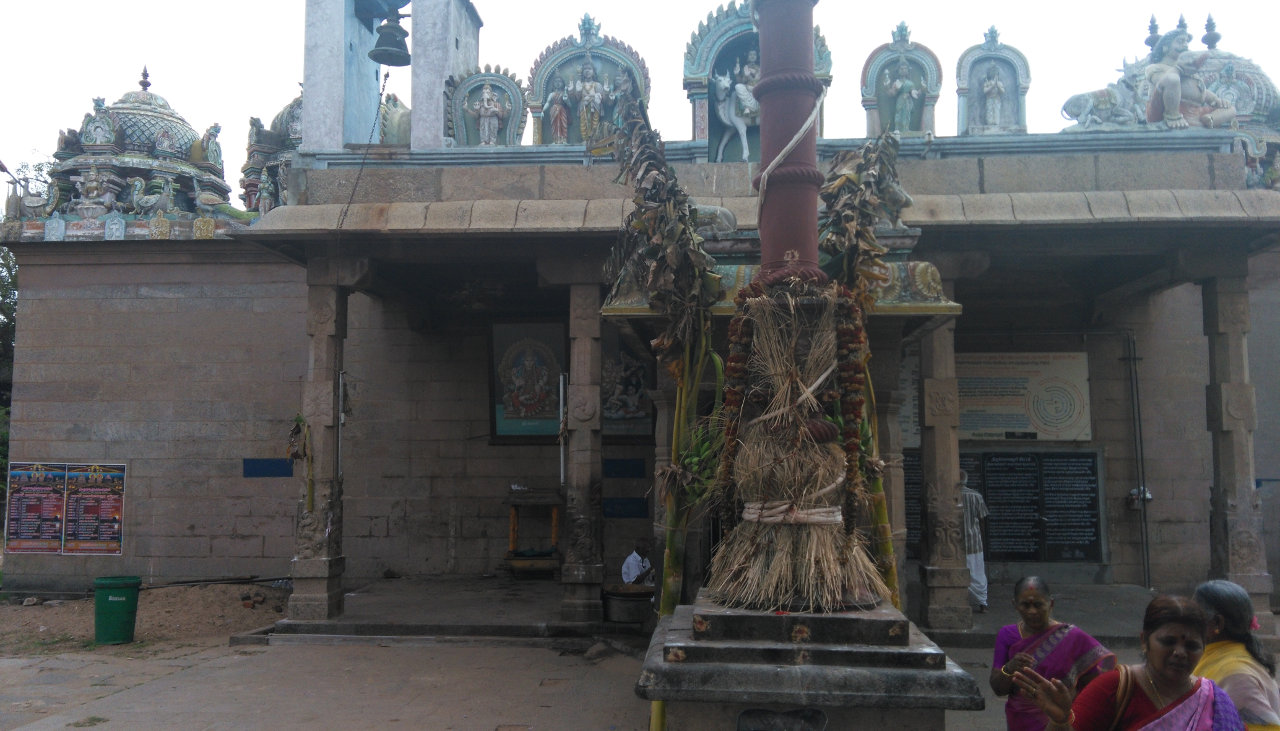 The Moolavar here is a big Swayambu lingam. At the time of Kumbabhishekam, the area around this lingam was dug up. It was found that the base of the lingam goes down way below 25 feet and hence further digging was discontinued.

Both Lord Veerateswarar and Goddess Sivananthavalli’s temples are separate and adjacent to each other. Both these temples are facing west.

Goddess Durga’s idol here is very unique. Although the idol is sculpted in black granite stone, her eyes appear white in colour much like the human eyes.

It is said that King Raja Raja Cholan was born in this place. As per stone inscriptions found in this temple, his elder sister donated funds for lighting lamps in this temple.

Poet Kabilar worshiped the lord of this temple. Thirukovilur has the reputation of being the place where the weddings of Angavai and Sangavai (the daughters of noted Tamil philanthropist and King Pari Vallal) were held. It is also believed that this wedding took place because of the efforts of poets Avvaiyar and Kabilar. The bridegroom was Deiveekan, the king of Nadu Naadu.

After King Pari Vallal’s death, his daughters Angavai and Sangavai had suffered a lot. The poet - saint Kabilar, a good friend of Pari and the caretaker of the girls could not find a suitable groom for them because of King Pari’s enmity with the rest of the kings. Kabilar requested the great poetess Avvaiyar, who was also a good friend of him, to help him arrange their marriage.

Despite continued efforts, Kabilar was unable to find a suitable match for them. Unable to bear the agony of not being able to help his friend’s daughters, he went to a cave (“Kugai”), and started fasting till his death. It was after his death that Avvaiyar finally convinced King Deiveekan to marry the girls. 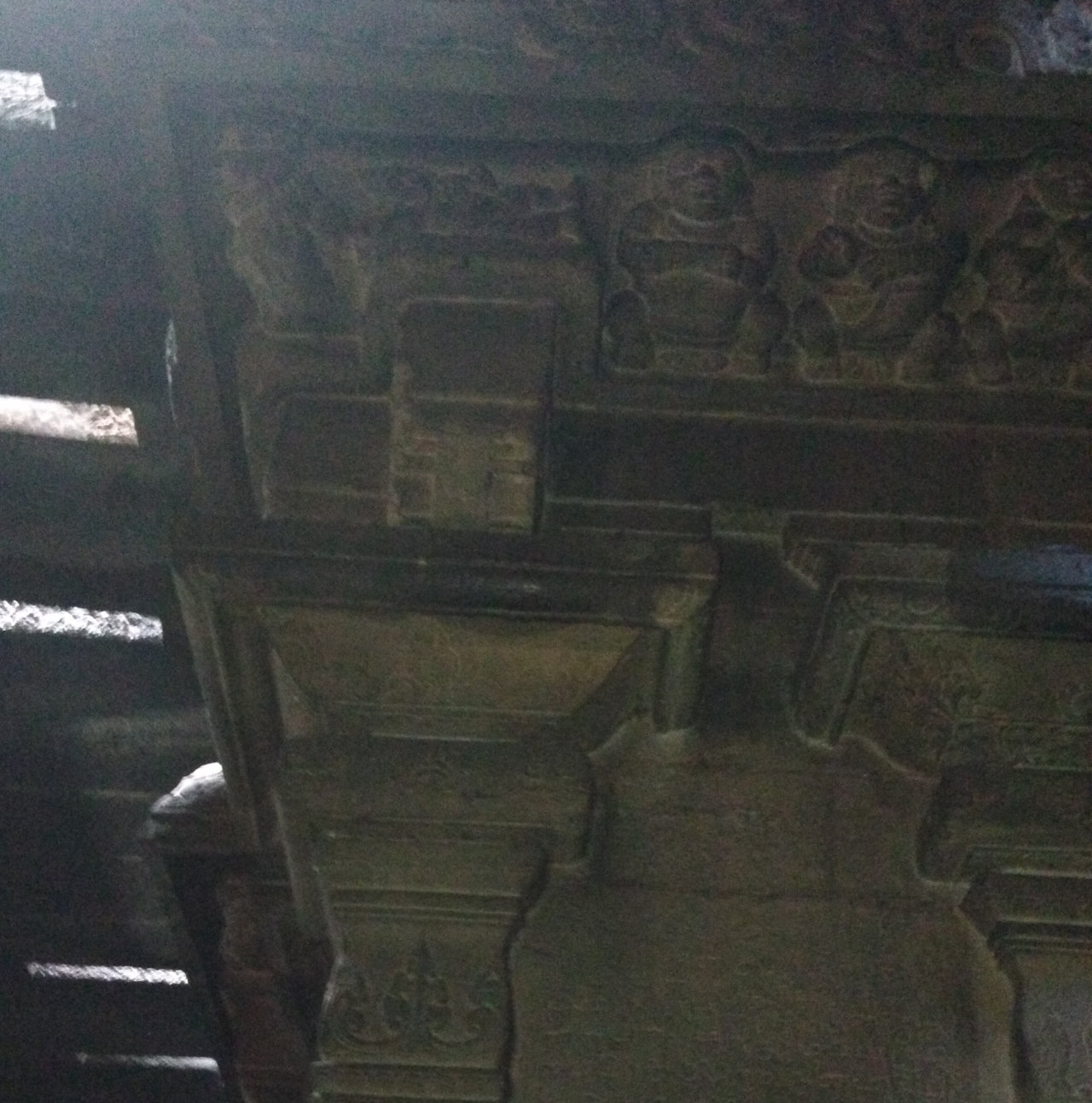 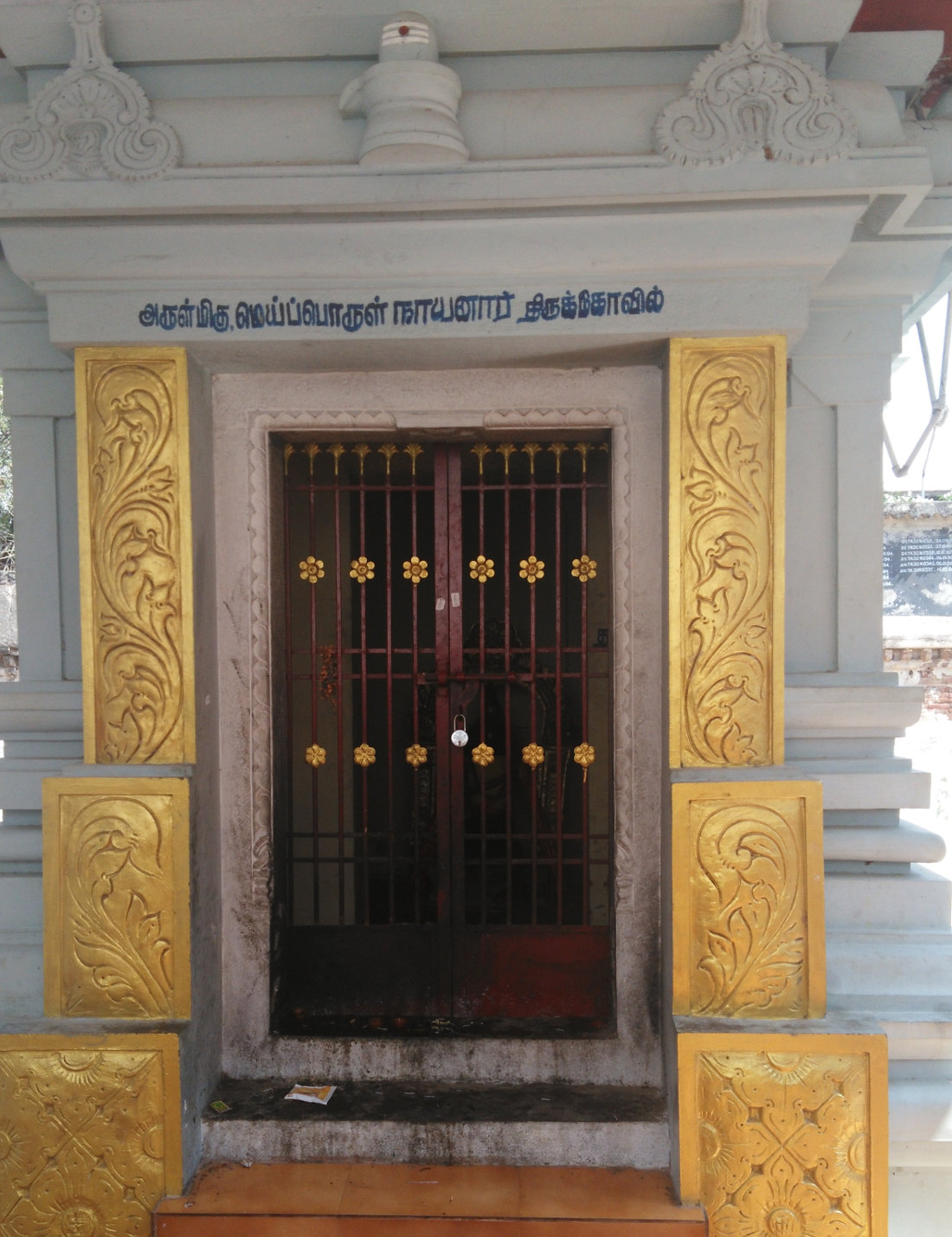 This is a Parikara Sthalam for all doshas related to planet Sukran.

It is believed by devotees that worshiping the lord here will absolve them of the sins of their previous birth.

As this is the place where Vasthu Sastra came into existence, many devotees bring their building plans here and seek the lord’s blessings before starting the construction of their houses.

As planet Venus (Sukran) was relieved of his curse here, devotees believe that worshiping the lord here will remove obstacles from their marriage proposals.

Thirukkovilur is also seen as a place where those afflicted by evil spirits can find relief.

Important festivals celebrated in this temple are –

Thiru Karthikai in the Tamil month of Karthigai (Nov-Dec),

Aadi Fridays in the Tamil month of Aadi (July-Aug),

Annabishekam, Skanda Sashti and Soora Samharam in the Tamil month of Aipasi (Oct-Nov),

Aani Thirumanjanam in the Tamil month of Aani (June-July. 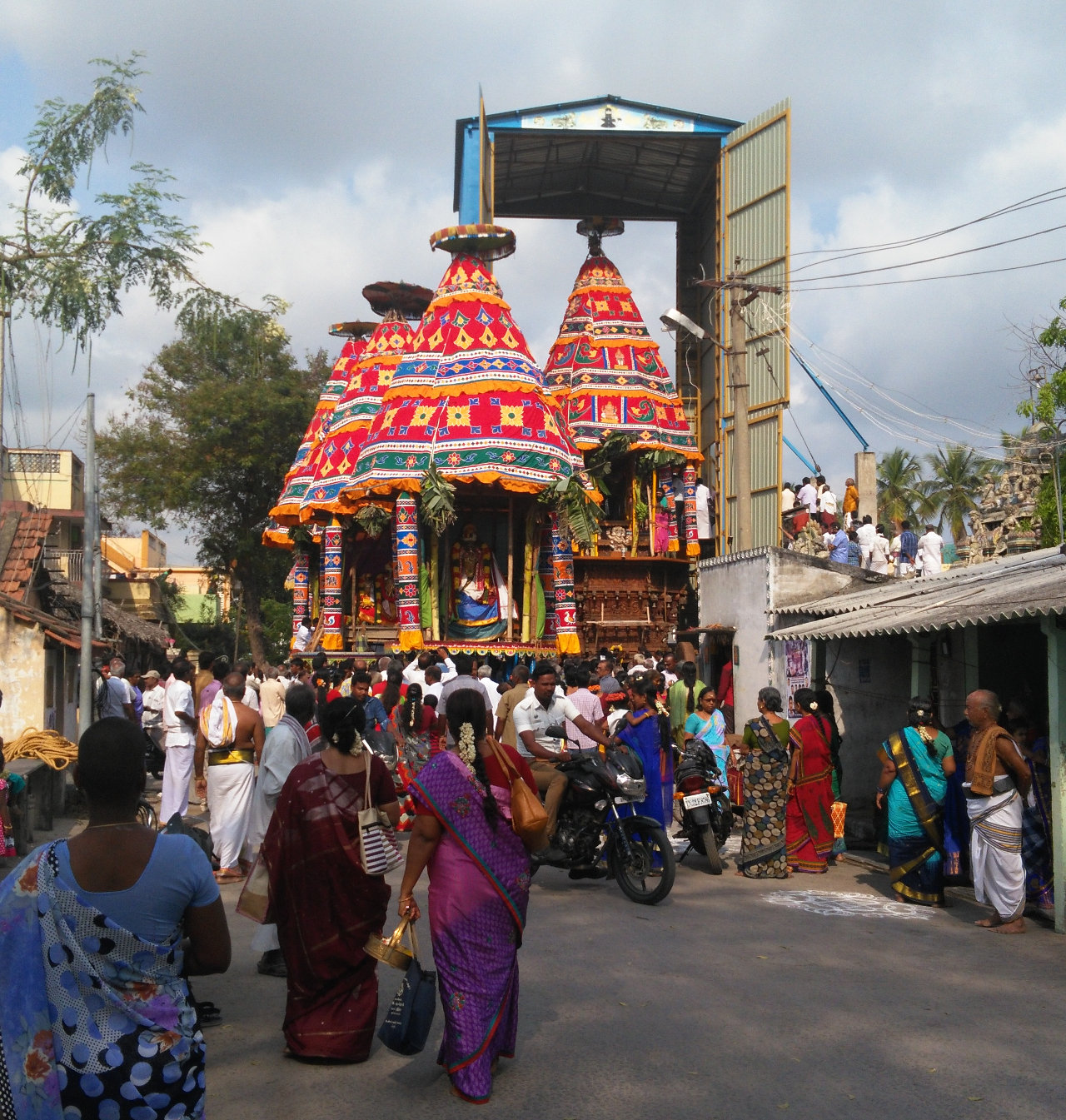