The stone inscriptions in this temple date back to the periods of Chola and Vijayanagara kingdoms.

This temple is under the administrative control of Dharumapuram Adheenam.

In Hindu mythology, there are eight special places where it is believed that Lord Shiva vanquished various demons and exhibited acts of bravery. These places are Veeratta Sthalams. In Tamil, this is referred to as “Atta Veerattanam” (“Atta” means eight and “Veeram” means bravery). Thiru Kurukkai is the seventh Veeratta Sthalam where Lord Shiva was believed to have been burnt Manmathan and later blessed.

The other seven Veeratta Sthalams are – 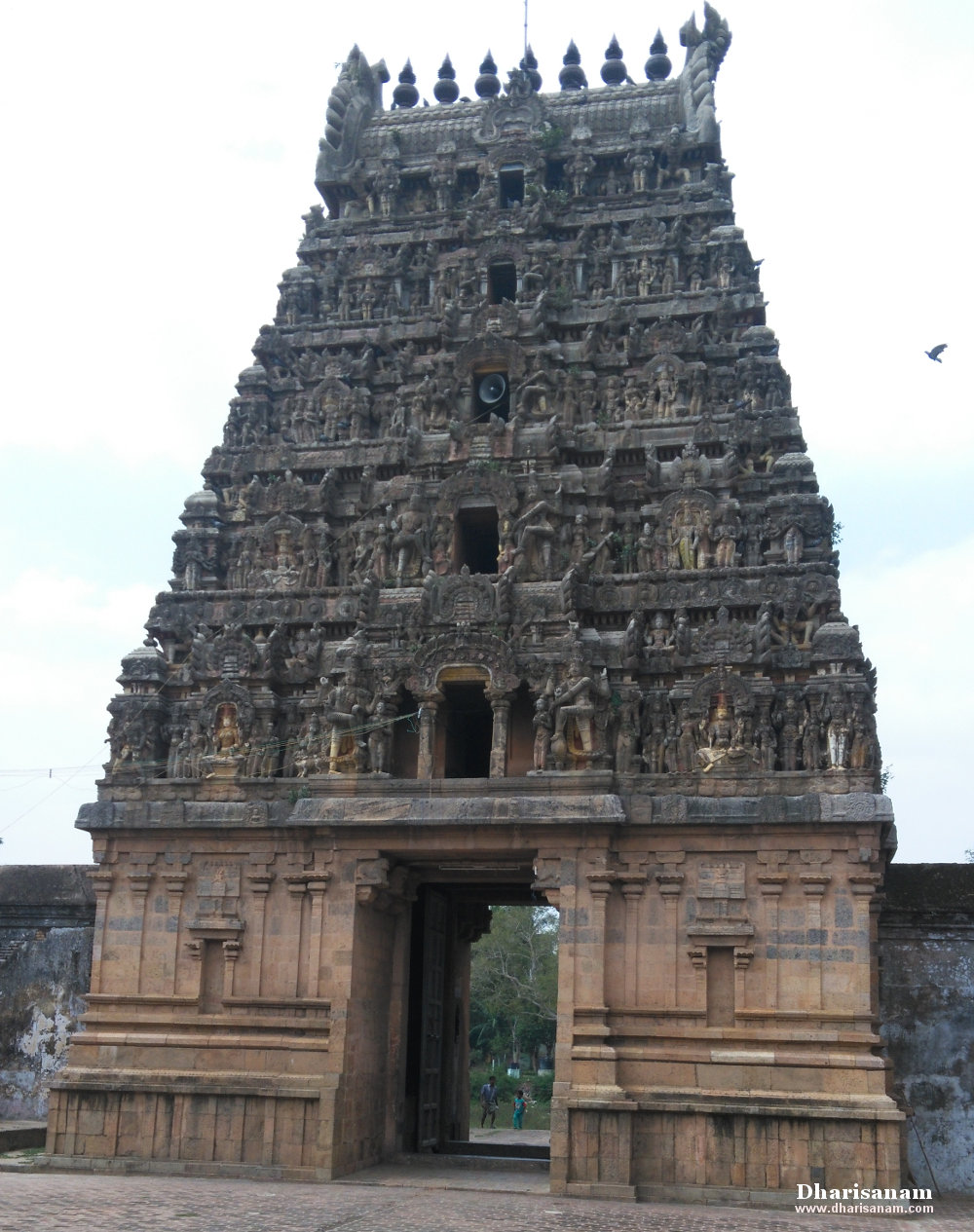 It is believed that Brahma, Vishnu, Lakshmi, Murugan and Rathi have worshiped the lord here. Manmathan, the deity of love and lust, was burnt here but was then brought back to life by Lord Shiva.

Thiru Kurukkai is associated with the legend of the death and rebirth of Manmathan (Kaaman). It is believed that two demons, Surapanman and Dharakan, were terrorising the celestial gods. The celestial gods tried to seek the help of Lord Shiva but the lord was in deep meditation. The celestial gods decided to send Manmathan to create a ruckus and awaken the lord. From this place (Kurukkai), Manmatha attempted to disturb Lord Shiva’s penance.

Manmathan sent five arrows towards Lord Shiva. Each arrow had a flower attached to it. Lord Shiva was disturbed when the flowers fell on him and he opened his eyes in anger. Such was the lord’s fury that fire came out of his third eye and burnt Manmathan.

Rathi, Manmathan’s wife pleaded to Lord Shiva to pardon her husband and restore him back to life. It is believed that in order to pacify Rathi, Lord Shiva brought Manmathan back to life and blessed both of them. The marks left by the five flowers, especially the lotus, can still be seen on this Shivalingam. Hence the lord here is praised as “Sri Kama Anga Naasan” and “Sri Kaamathakana Murthy”.

There is a separate shrine for Sri Kaamathakana Murthy along with Goddess Parvathy (procession idols). Here Lord Shiva is sitting as “Yoga Murthy” (in a meditative posture) surrounded by Sanakathi Rishis. Since the lord here is in the form of Yoga Murthy, not everyone can get his darshan easily. It is believed that one has to have good fortune along with the lord’s blessings to get his darshan. Once you get this darshan of Lord Shiva, it is believed that your good time will start. 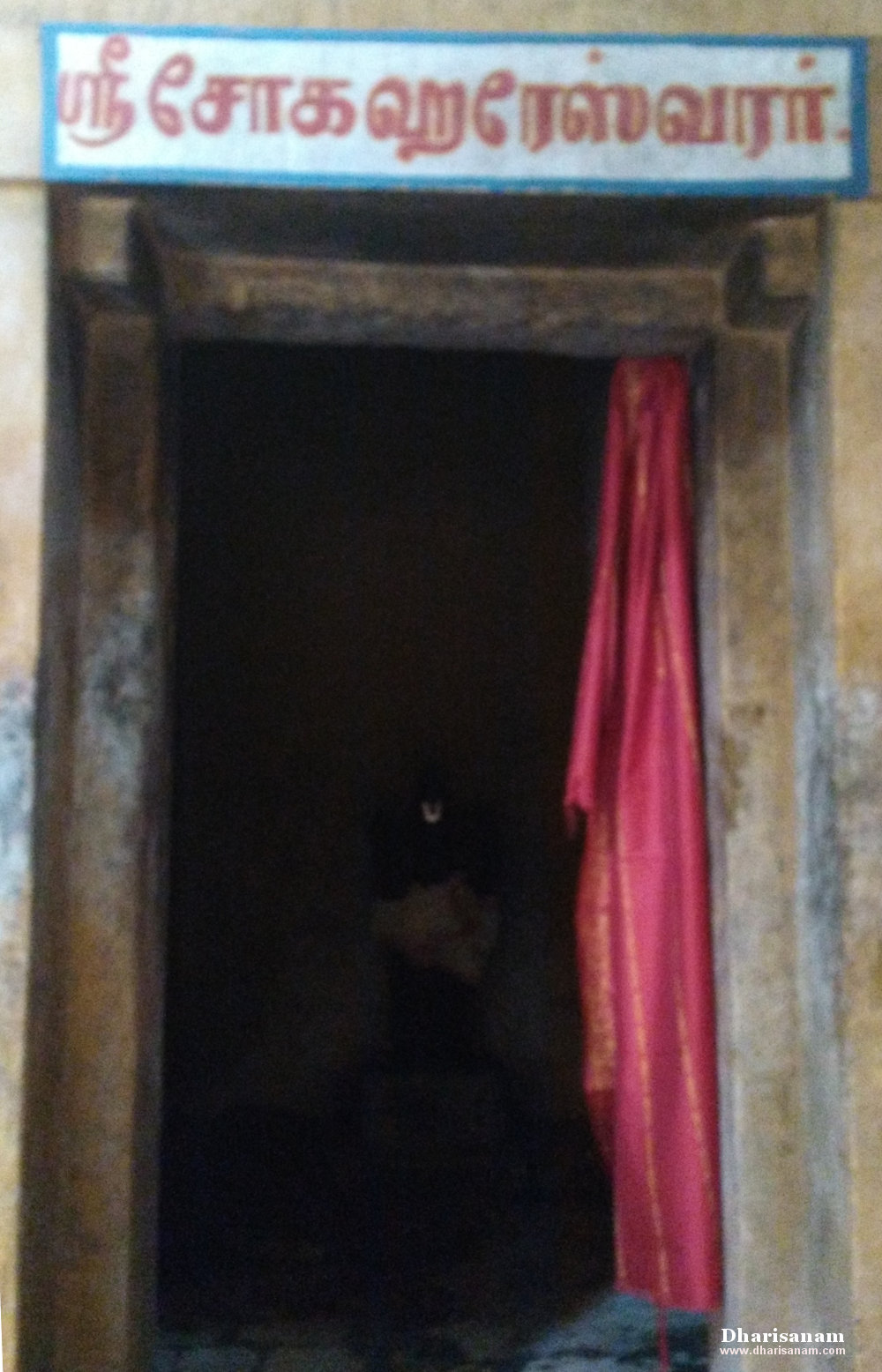 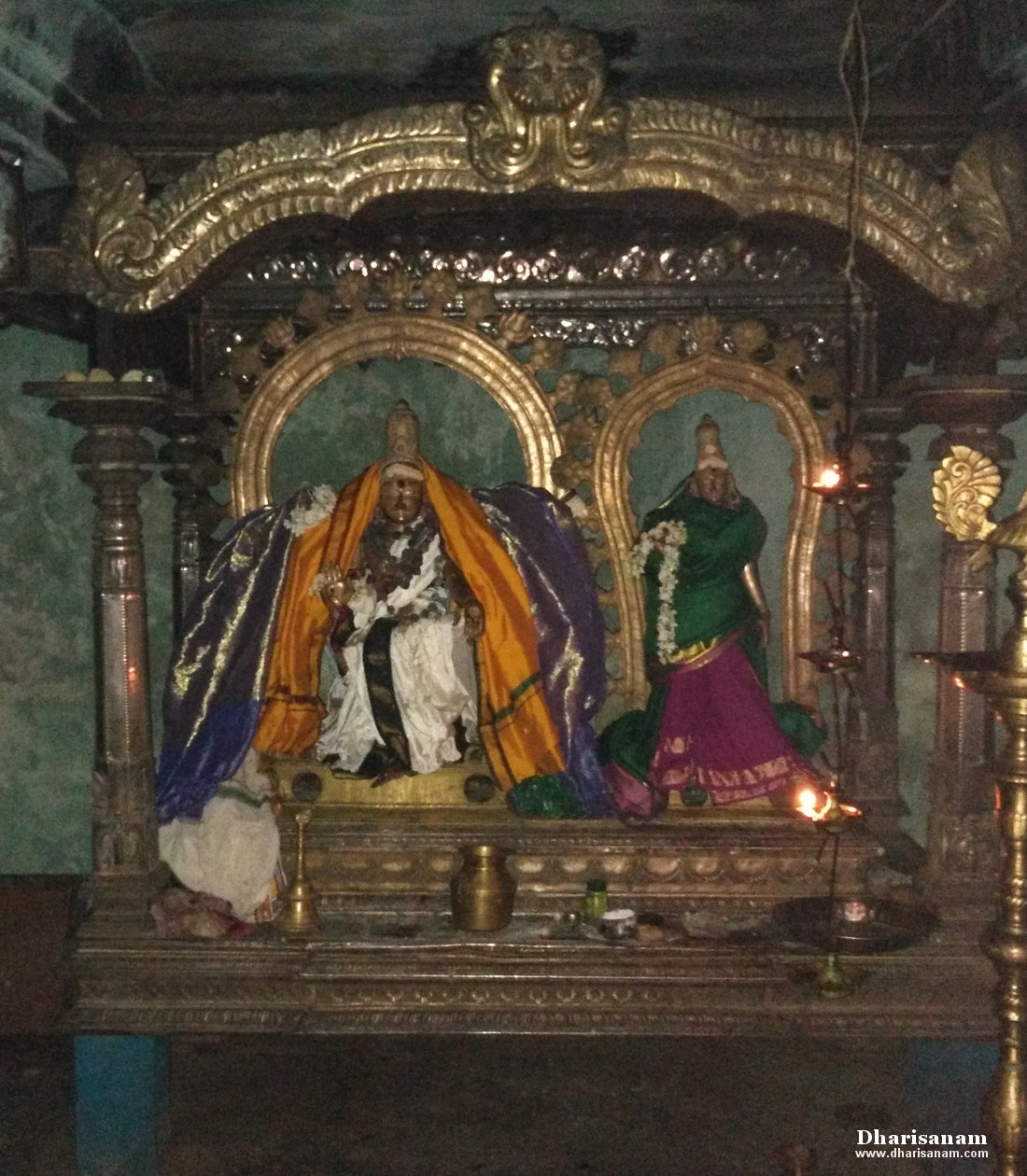 Various places around this village bear names of incidents connected with Manmathan’s tryst with Lord Shiva. Some of them are –

“Kanganam Puthur” - this is the place where he decided to disturb Lord Shiva’s penance. He tied a thread (“Kanganam” in Tamil) to his hand to mark the pledge that he made to the celestial gods.

He drank milk at Palakudi (“Pal” means milk). Took his bow at Villinur (“Vil” means bow). He first decided to shoot his arrow from a place called “Kavalamedu”. However, Kavalamedu was not suitable for this purpose. Hence, he came to Mettu Korkai and finally shot the arrow at Lord Shiva.

It is believed that after destroying Dakshan’s (his father-in-law) yagna, Lord Shiva decided to medidate under the Kadukkai tree here. Hence the lord here is also praised as Sri Yogeeswarar. The river Pazhavaaru, to the north of this village, is known as Gnana Theertham. It is believed that the tears of joy that flowed out of Lord Shiva’s eyes while he was in meditation merged with this river.

Another legend is that a sage called Theerthavahu used to visit various Shiva temples and perform rituals by invoking river Ganges through his Yogic powers. However, in this place while he was trying to get water from Ganges his arms got shrunk and he could not offer the water to the lord. It is belieed that this is happened because the Soola Theertham in front of this temple is considered to be more auspicious than the Ganges. He prayed to Lord Vinayakar and Lord Shiva here who then restored his arms back to their original form. Hence this place gets the name “Kuru Kai” (“kuruki” means to shrink and “kai” means arm in Tamil). Also, the idol of Lord Vinayakar here is depicted with shorter arms and is praised as Sri Kurunkai Vinayakar. The idol of Sage Theerthavahu can also be seen besides this Vinayakar’s idol.

Other than the shrines of Lord Shiva and Goddess Parvathy, shrines and idols of Vinayakar, Murugan with his consorts, Mahalakshmi, Suryan, Chandran, Bairavar,

Kurungai Vinayakar, Navagraham and Soha Hareswarar (Mahavishnu) can be seen in the hall and corridor.

There is a separate shrine for Sri Kaamathakana Murthy who is in a seated posture. His left leg is folded and his right leg hangs down. His right hand is in the “Abhaya Mudra” and his left hand is placed on his left leg.

Procession idols of Rathi and Manmathan are also placed in the main hall.

In the “koshtam” (place surrounding the sanctum sanctorum), idols of Maha Ganapathy, Dakshinamurthy, Lingothbavar, Brahma, Durgai and Chandikeswarar can be seen. 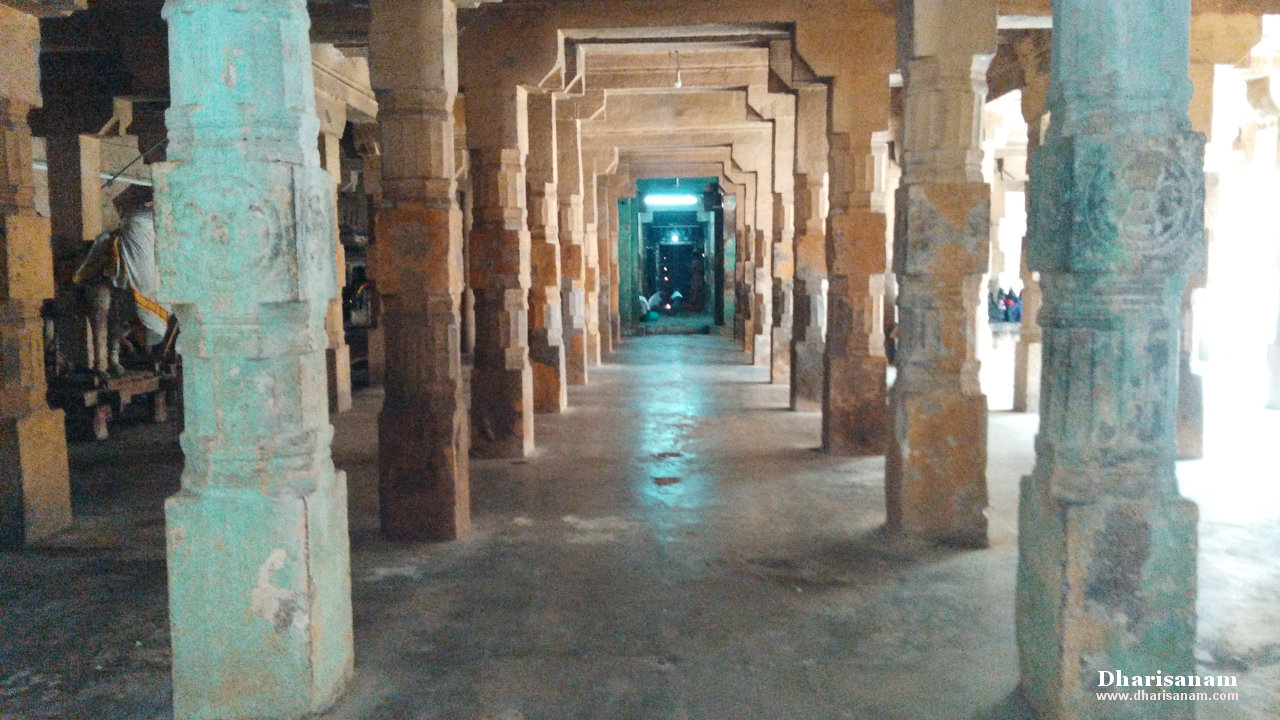 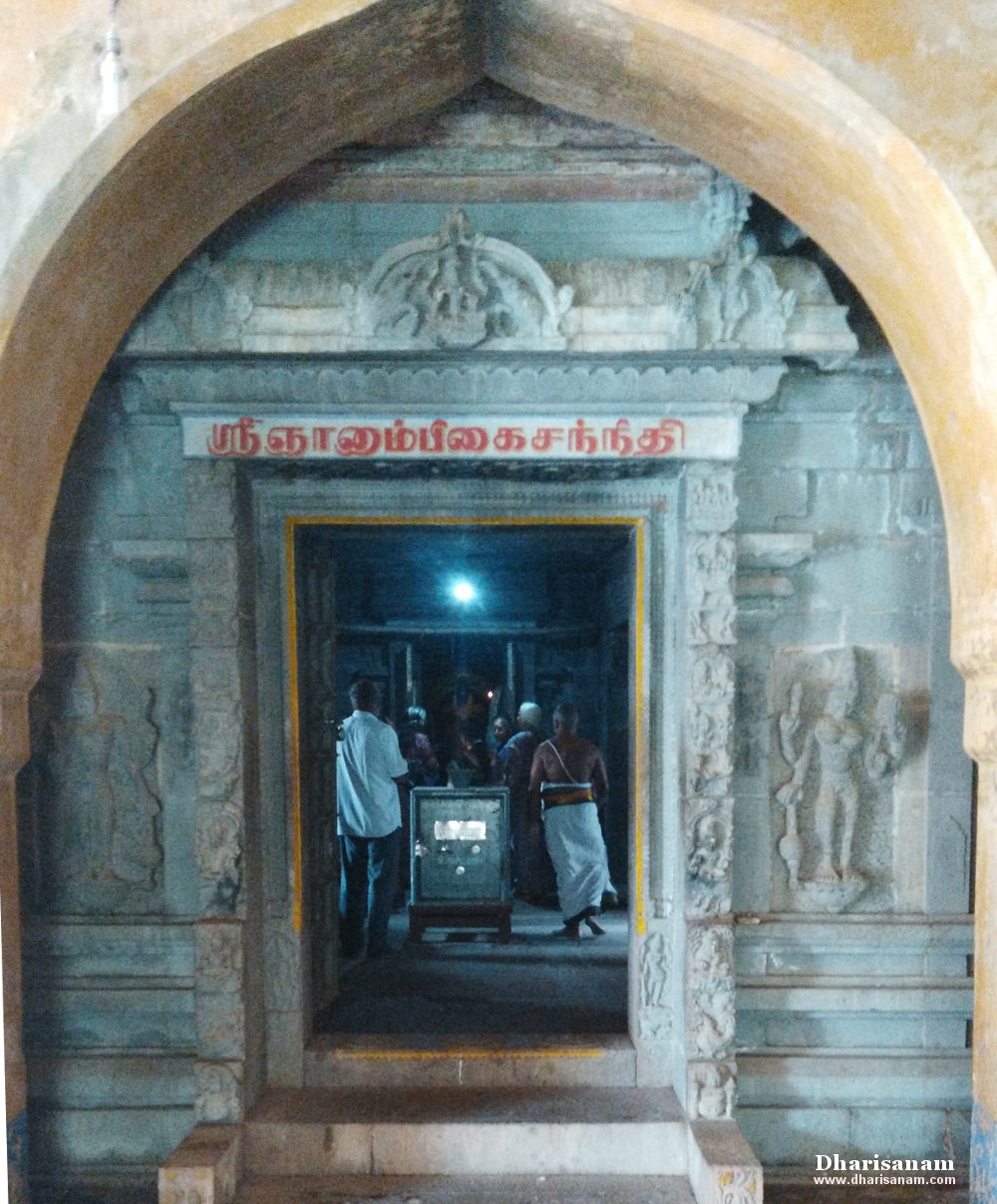 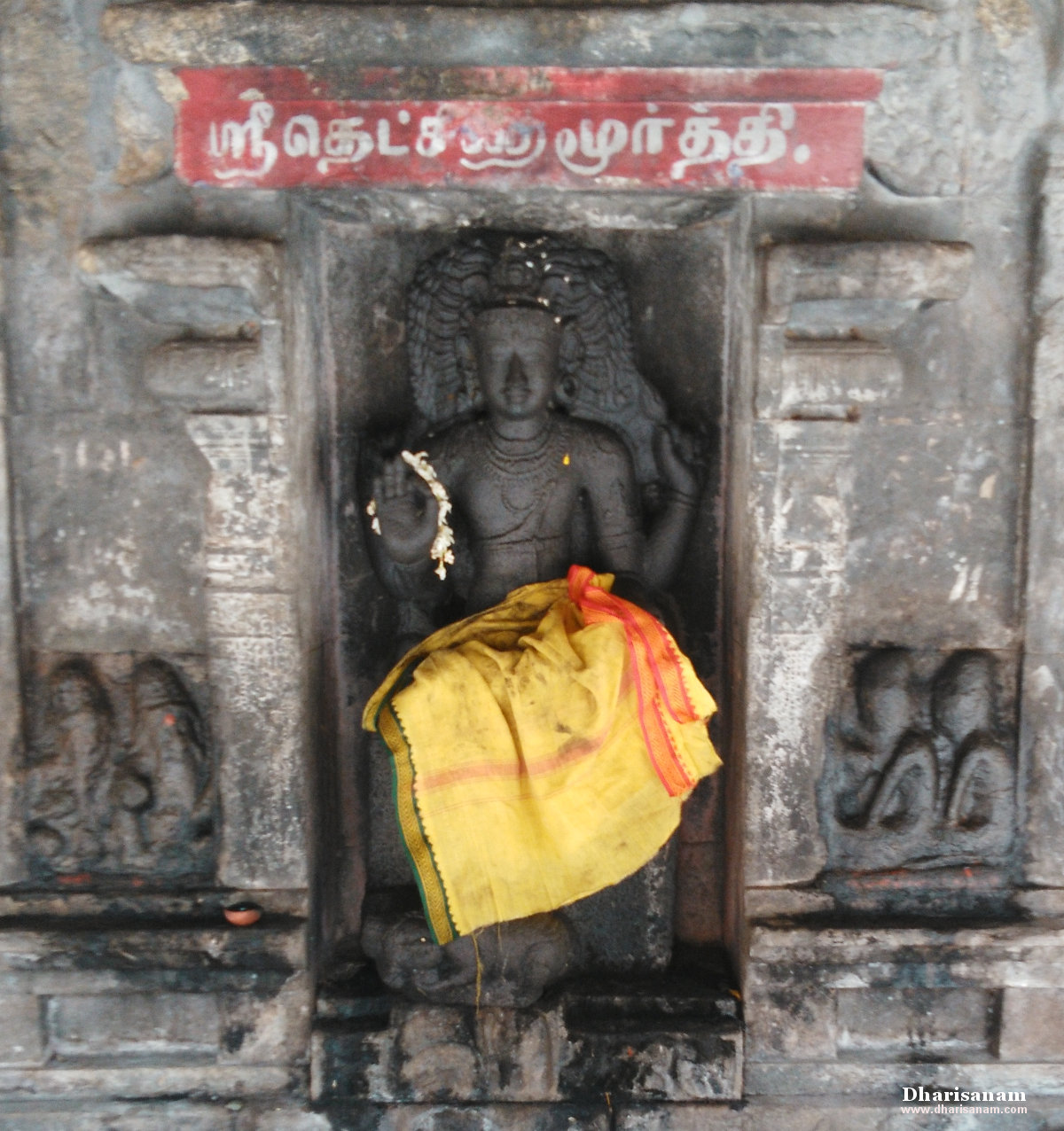 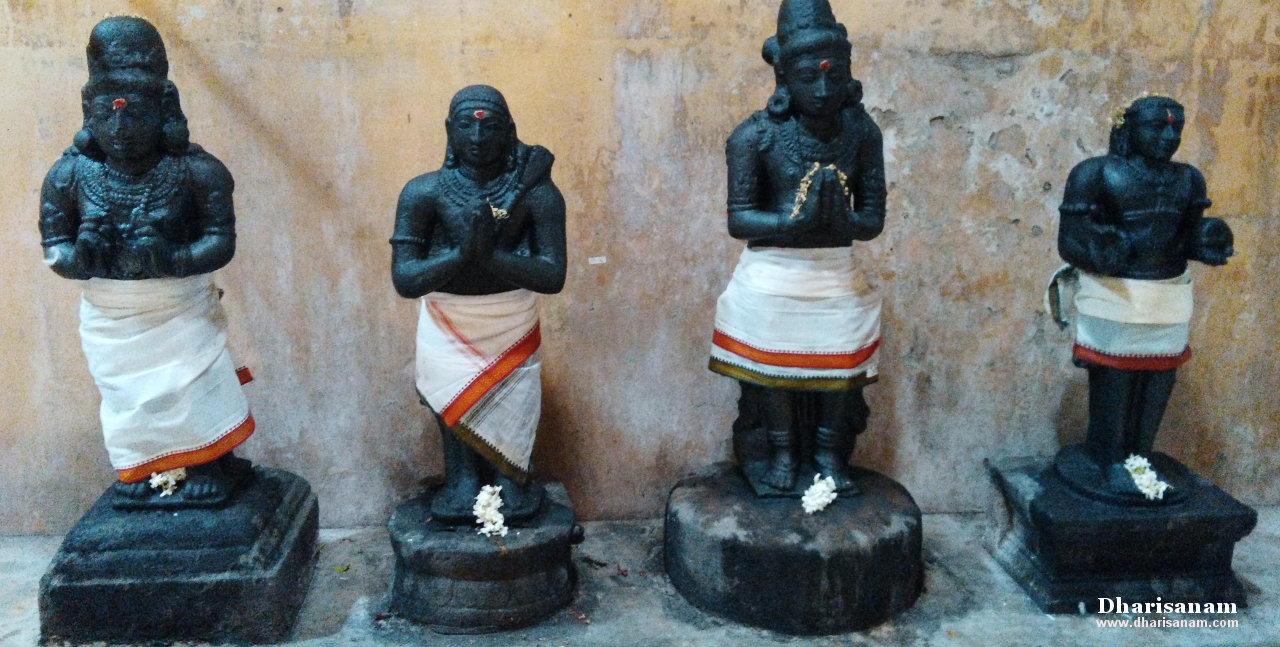 Behind the sanctum sanctorum, on either sides of Lord Annamalaiyar, there are idols of Lord Mahavishnu and Lord Brahma in a worshipping posture. Devotees can enjoy the darshan of all the three lords (Trimurthys) – Brahma, Vishnu and Shiva. This is considered to be very auspicious.

Near this temple (about ½ km away), there is a place called “Vibhoothi Kuttai” where Manmadan (Kaaman) is believed to have been burnt. 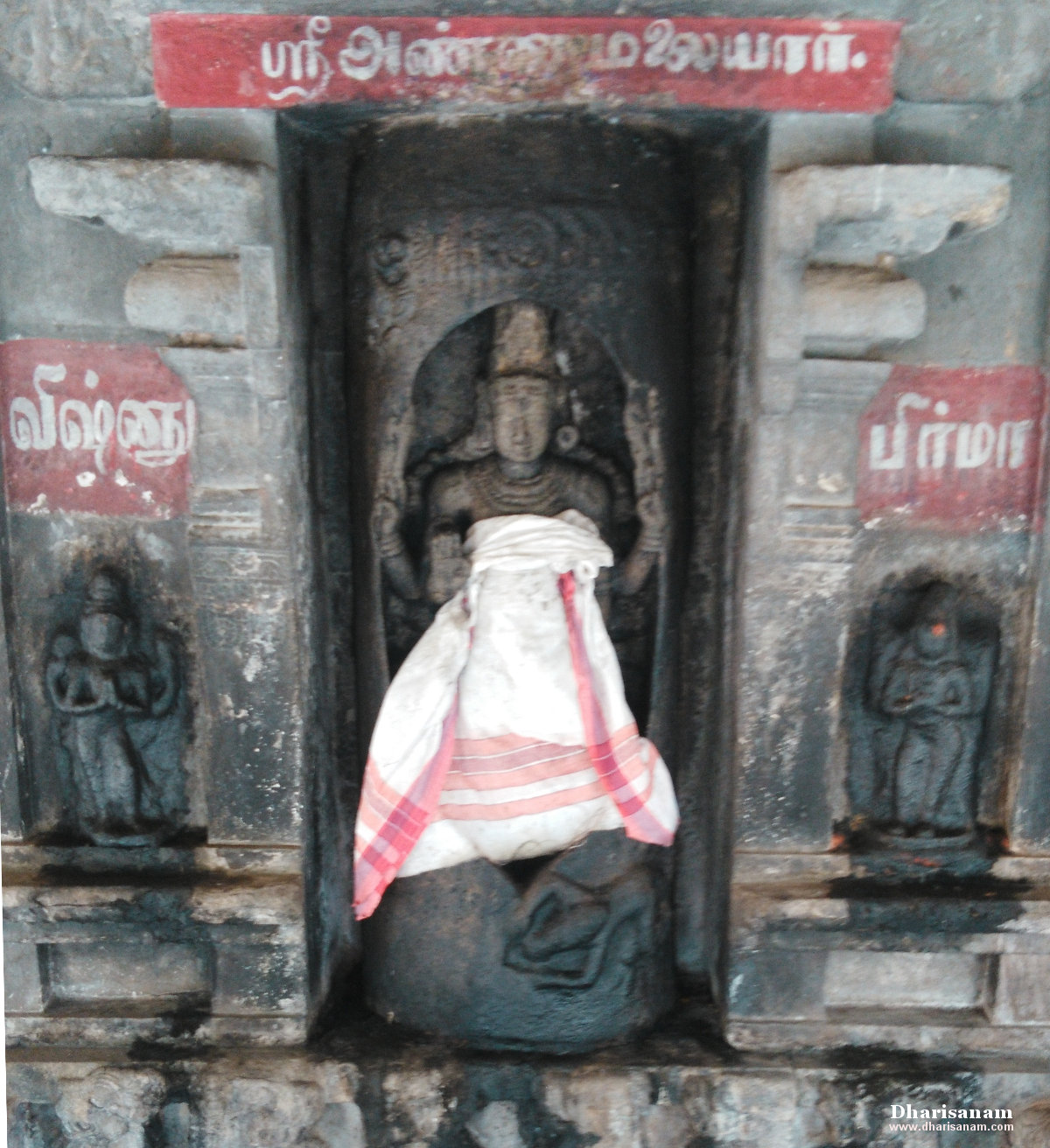 Lord Natarajar’s Sabha here is known as “Kaamanaasini Sabha” and “Sambu Vinotha Sabha”. The cosmic dance (“Thandavam”) of this Nataraja is known as “Veera Natanam”.

Devotees believe that worshiping the lord here will cleanse them of the sins that they may have unintentionally accrued.

Devotees also believe that by worshiping the lord here, they will be blessed with mental strength and fortitude.

“Puthrakameshti Yaga” can be performed in this temple by those seeking child boon (“Santhana Prapthi”).

This temple is also a Parihara Sthalam for “Varga dosham”.

10-day “Kamathakana” festival in the Tamil month of Maasi (Feb-Mar),

Masi Maham and Maha Shivrathri in the Tamil month of Masi (Feb-Mar). 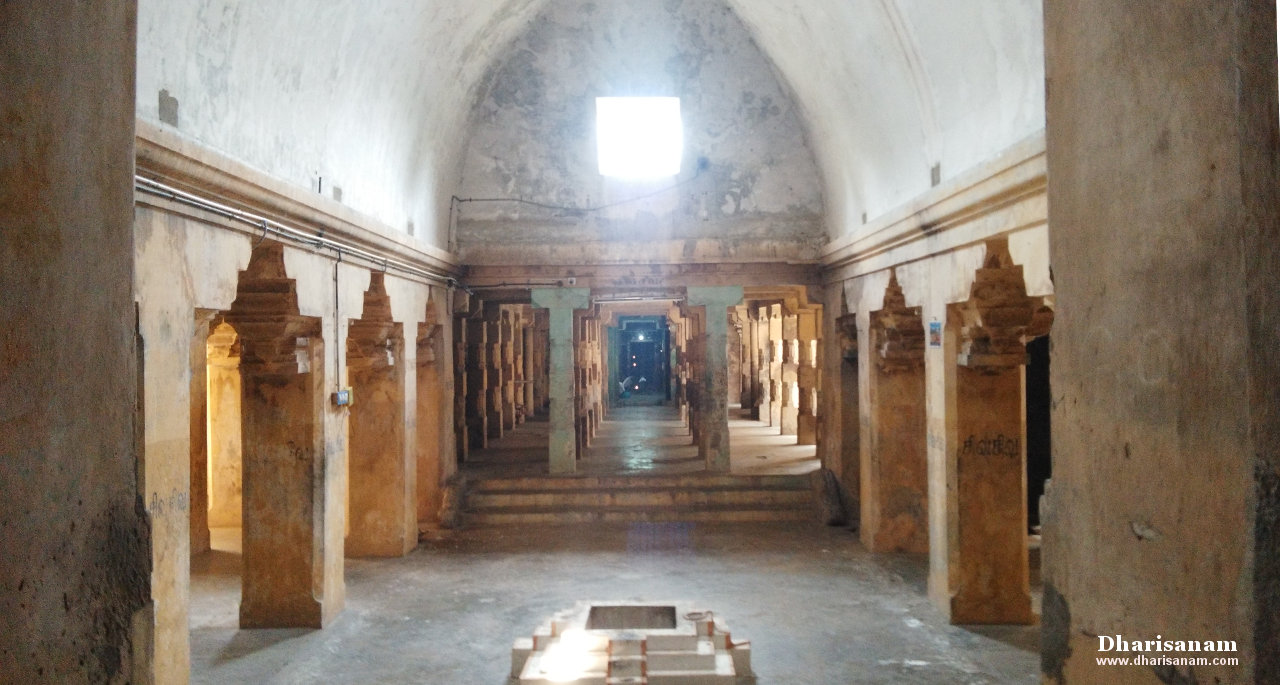 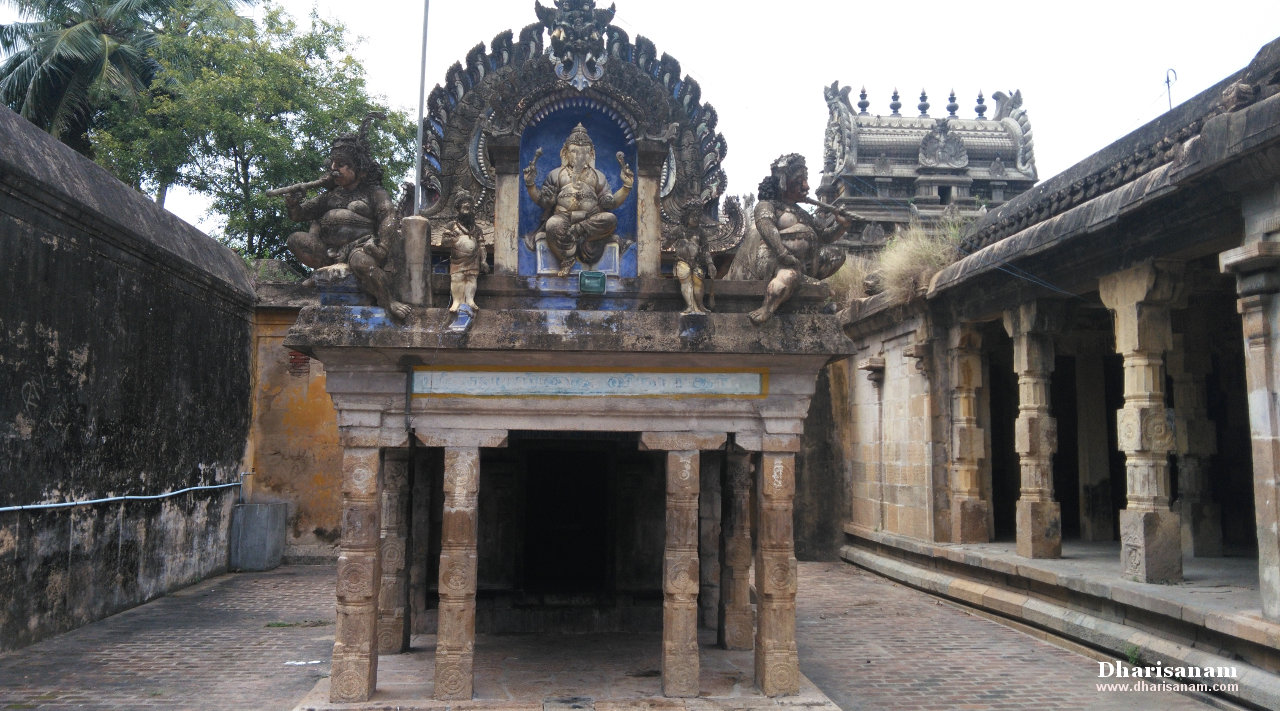