Thiruvazhundur is situated at a distance of about 12 kms from Mayiladuthurai. From Mayiladuthurai proceed towards Kumbakonam via Kuthalam. After Kuthalam, Komal road can be reached. From there take the diversion road towards Komal, then proceed for about 4 kms to reach Therazhunthur.

There are six stone inscriptions in this temple which relate to the period of Chola Kings Kulothungan-III and Rajarajan.

According to legend, in ancient times, this region was densely covered with Sandalwood trees. Hence the historical name of this place is “Santhanaranyam” (“Santhanam” means sandalwood and “Aranyam” means forest in Tamil). 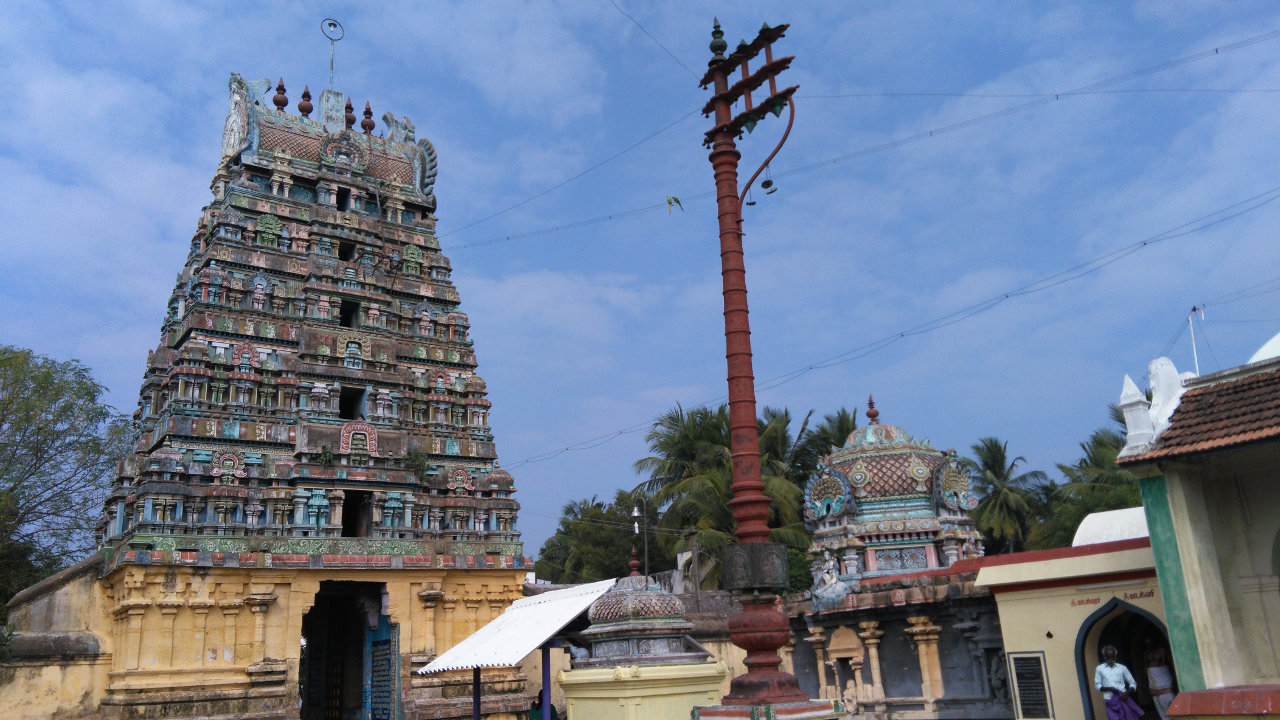 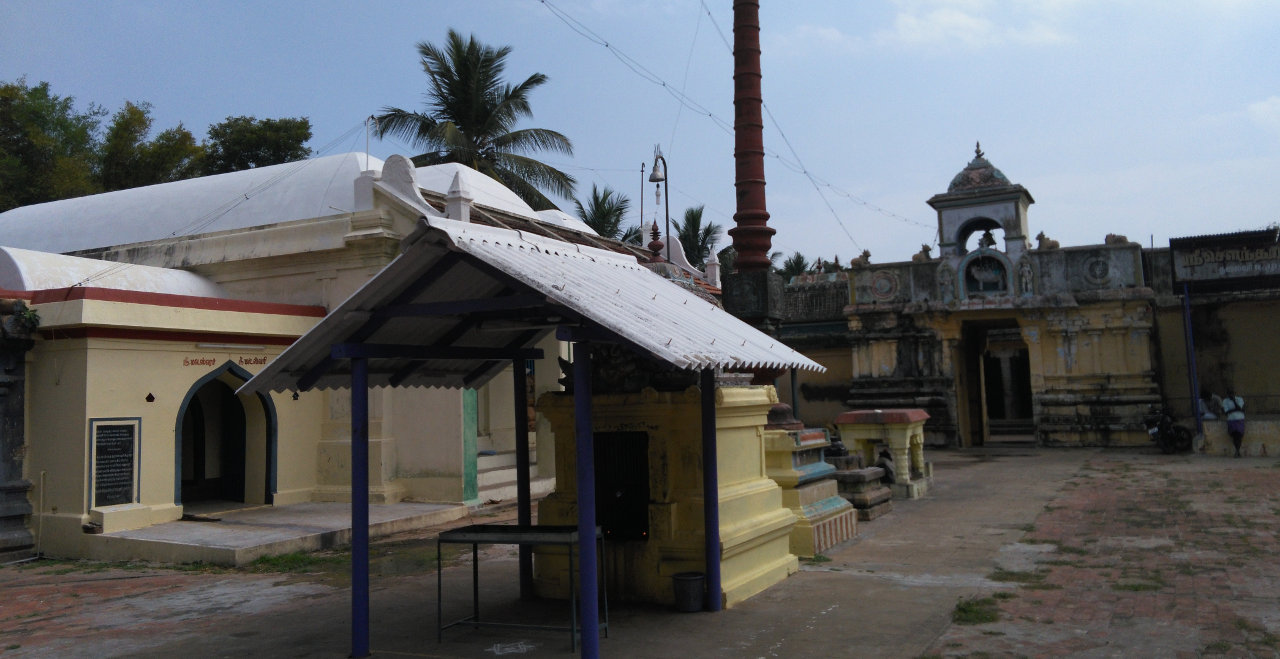 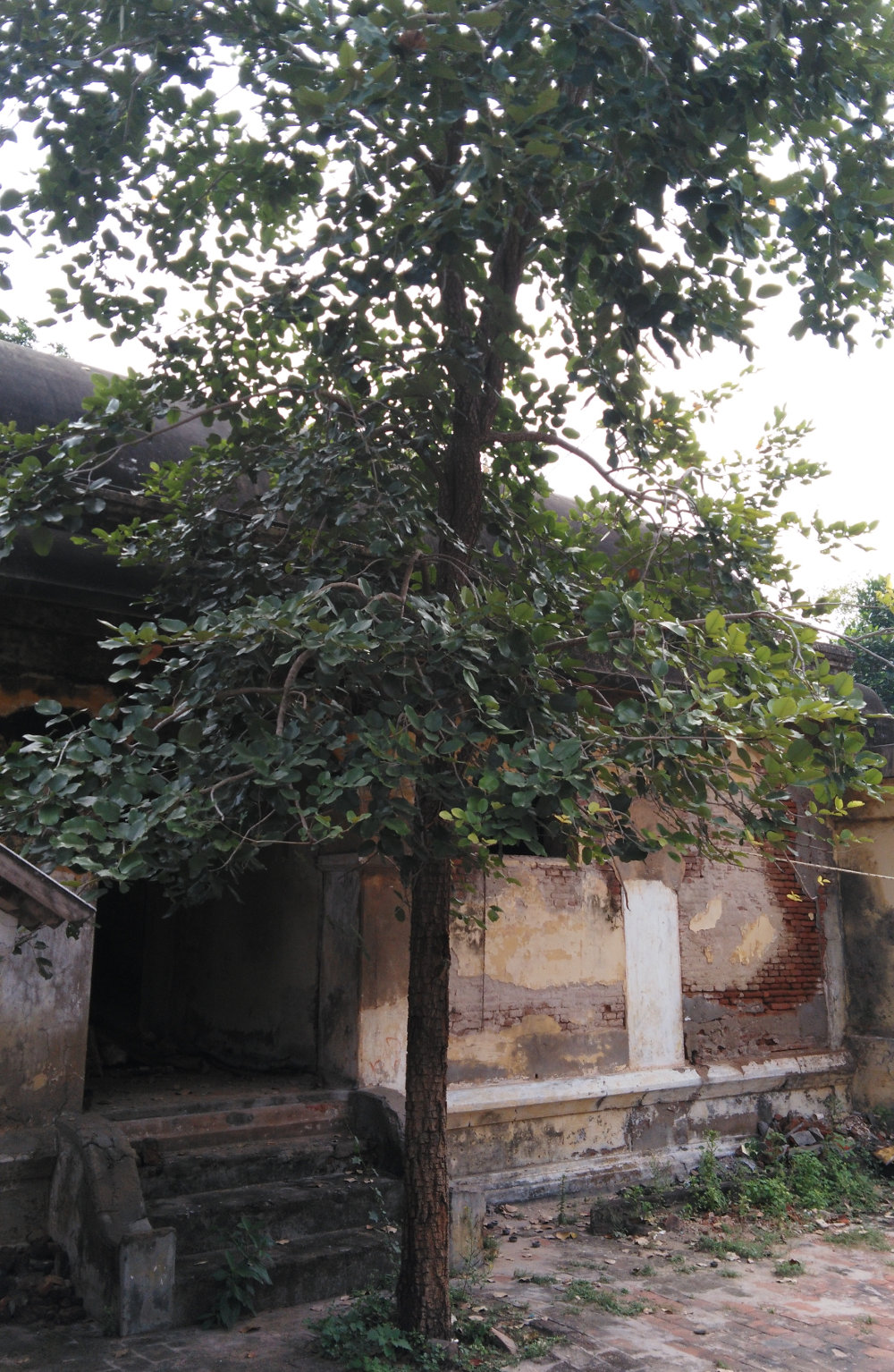 Therezhunthur enjoys a special place in mythology because it is linked to the legends of a few nearby Paadal Petra Shiva Sthalams.

As per the Sthala Puranam of this temple, once Lord Shiva and Lord Mahavishnu played a game of dice. Goddess Parvathi was chosen to be the mediator. During the course of the game, there was a doubt regarding the numbers. It is believed that Goddess Parvathi supported her brother, Lord Mahavishnu. Angered by her act, Lord Shiva cursed her to become a cow. Lord Vishnu also felt guilty about it and regretted the fact that she was punished because of him. So, he decided to take the form of a shepherd to protect her. Goddess Parvathi prayed to Lord Shiva to pardon her. Lord Shiva told her that she would be relieved from this curse and restored to her original form in due course of time at a place called Thiruvaduthurai.

It is believed that after cursing Goddess Parvathy to become a cow, Lord Shiva stayed in this place as a brahman and taught Vedas under the sandal tree, this temple’s sacred tree.  Hence the lord is known as “Sri Vedapureeswarar”.

It is also believed that Devas, Vedas, Ashtadikpalakars (Directional Gods) Sage Agasthiyar and River Kaveri have worshiped the lord here.

Another legend associated with this place is that of Mazhavanadu King Oorthuvaradhan. The king was a devotee of Lord Brahma. Pleased with his worship, Lord Brahma gifted him a chariot which could fly in the sky. Once the king was flying on his chariot when it got stuck and got grounded in this place. He found that Sage Agasthiyar was worshipping Lord Shiva here. He realised that this was the reason why his chariot could not move any further. He apologised to the sage and worshiped the lord here. Hence this place gets the name Therazhundur (“Ther” means chariot, “azhundhiya” means “getting stuck” and “Oor” means village in Tamil).

There is a Vinayakar temple on the way to this temple. It is believed that when Saint Thirugnanasambanthar visited this place, he was stuck at a crossing and was not sure on which way to proceed. This Vinayakar guided him and hence he is praised as Vazhikaati Vinayakar (“Vazhikaati” means guide in Tamil).

Other than the shrines of Lord Shiva and Goddess Parvathy, shrines and idols of Vinayakar, Murugan, Kailasa Nathar, Bhabahareswarar, Kadambavaneswarar, Agasthiar, Markandeyar, Cauvery, Navagraham, Sorna Bairavar, Kala Bairavar and Chandikeswarar can be seen in the corridors.

Near the temple’s sacred tree, there is a shrine for “Kshetra Lingam” with idols of Vinayakar and a Nandhi.

There are separate shrines for Sri Madeswarar and Sri Madeswari in the outer corridor. It is believed that initially only these two shrines constituted this temple. The other shrines and buildings were constructed at a later date.

In the “koshtam” (place surrounding the sanctum sanctorum), idols of Narthana Vinayakar, Dakshinamurthy, Lingothbavar, Brahma and Vishnu Durgai can be seen.

There is a separate temple for Lord Mahavishnu which faces this temple. 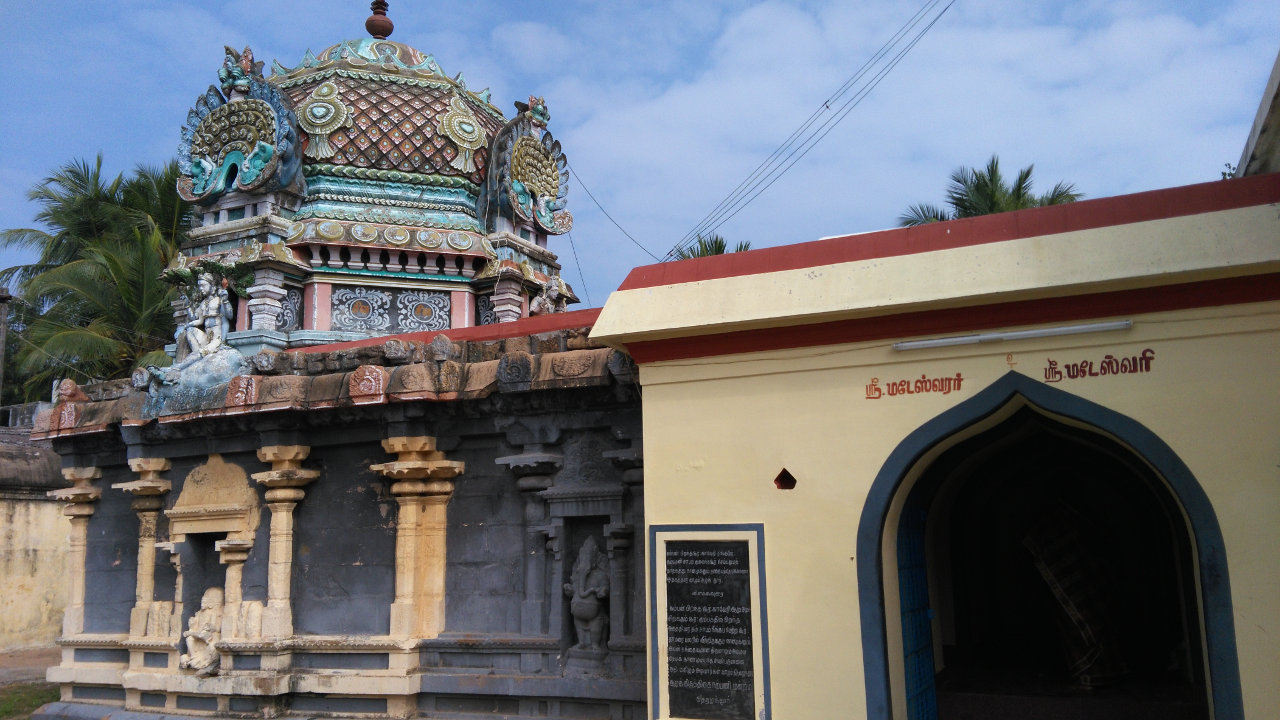 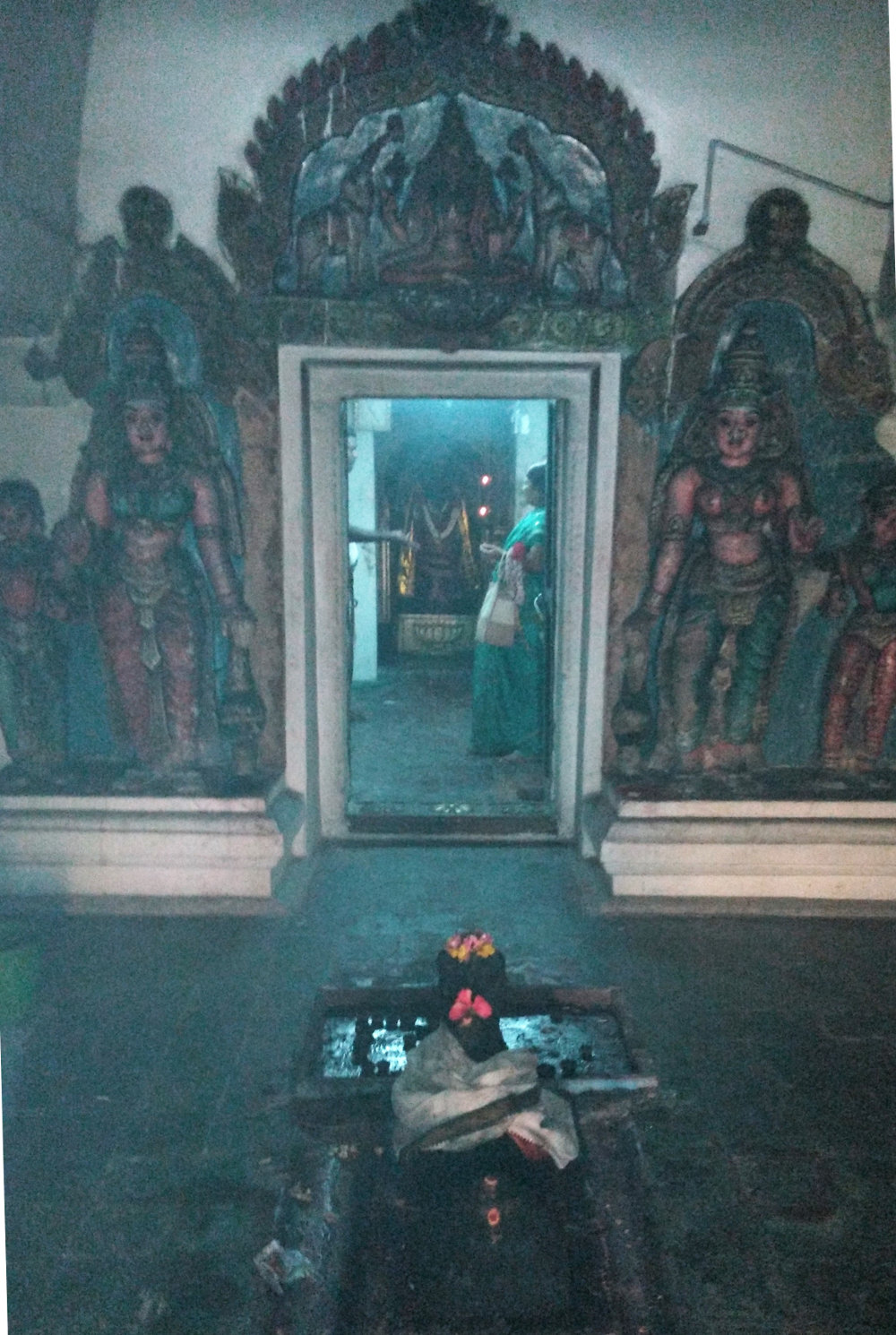 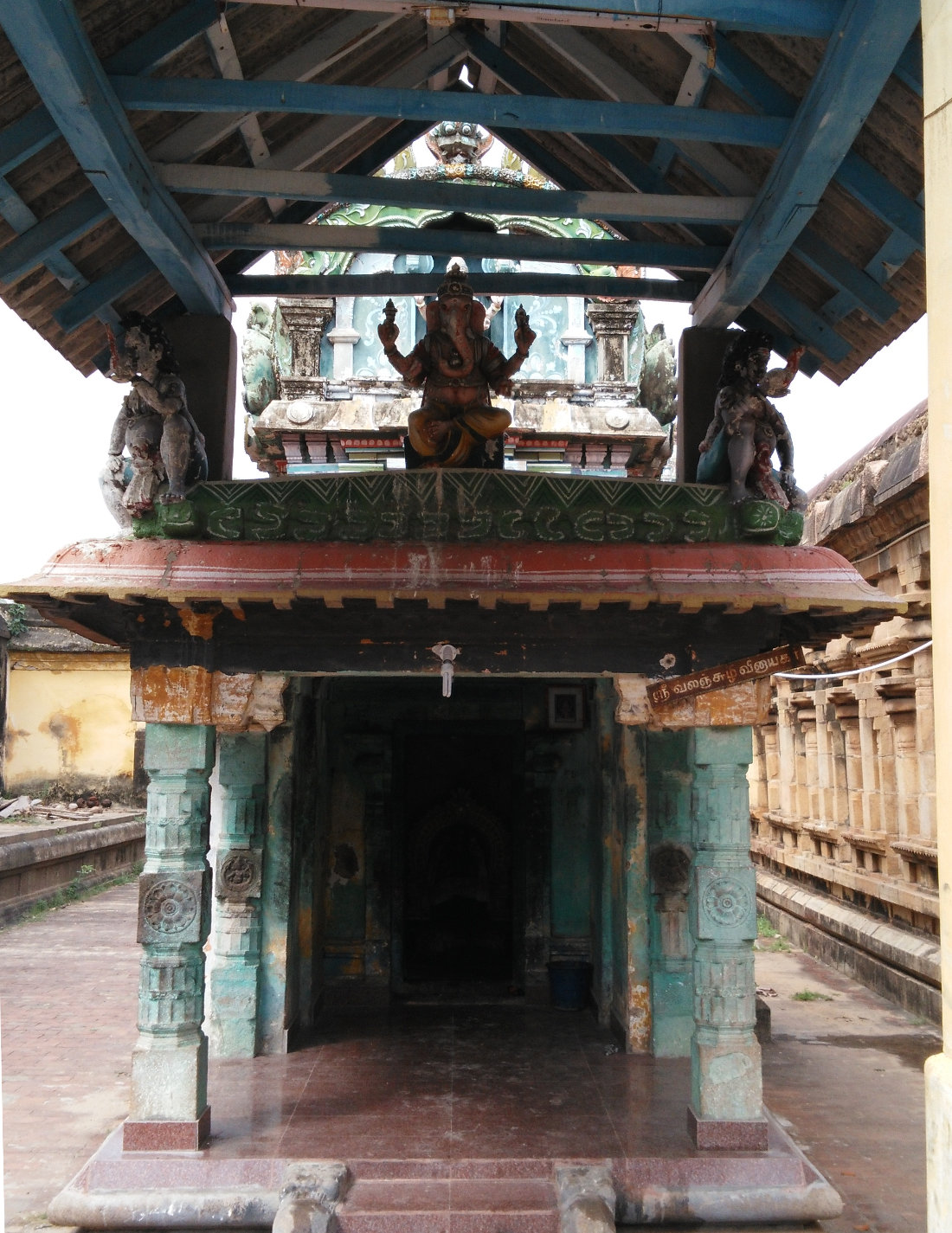 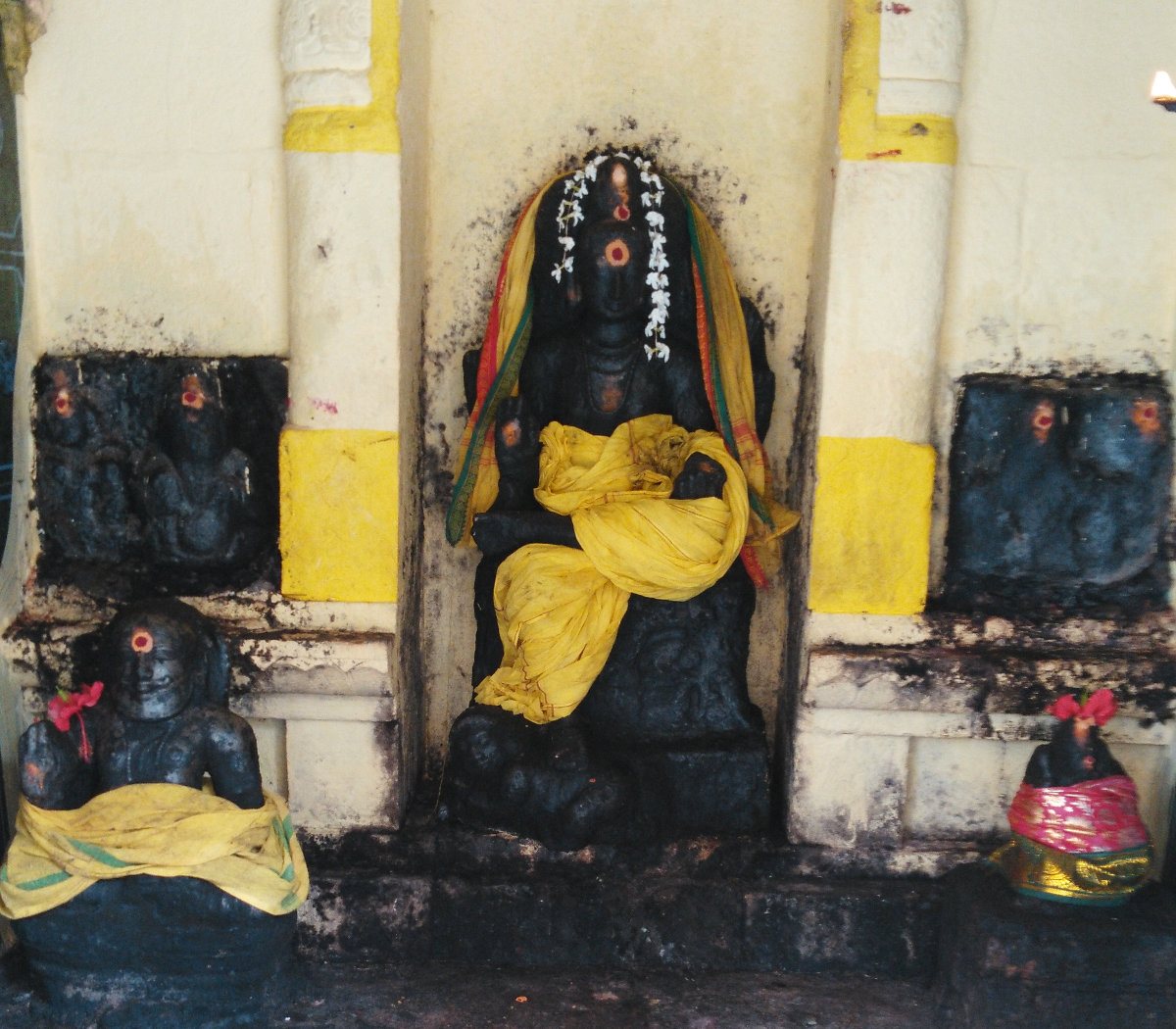 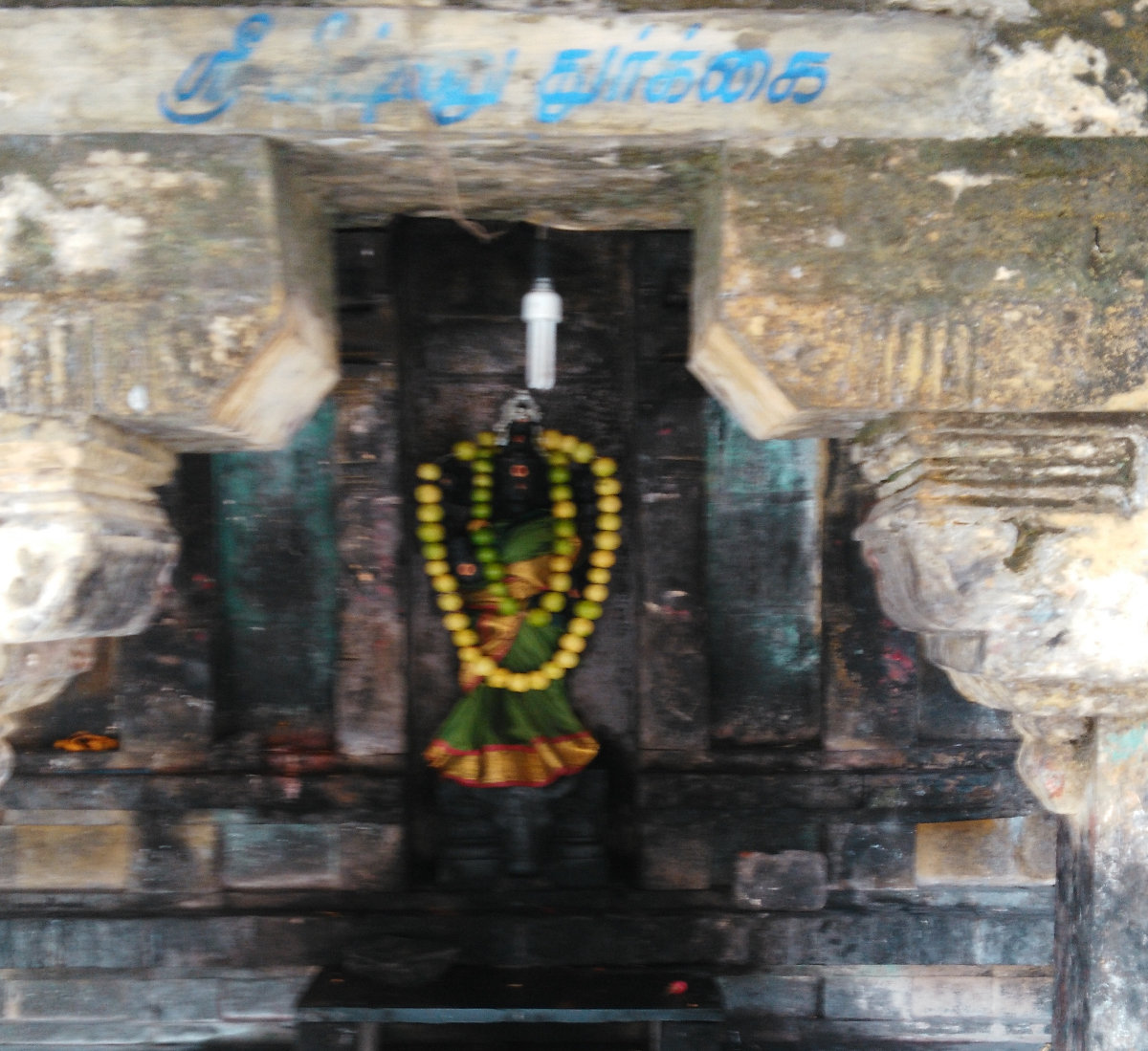 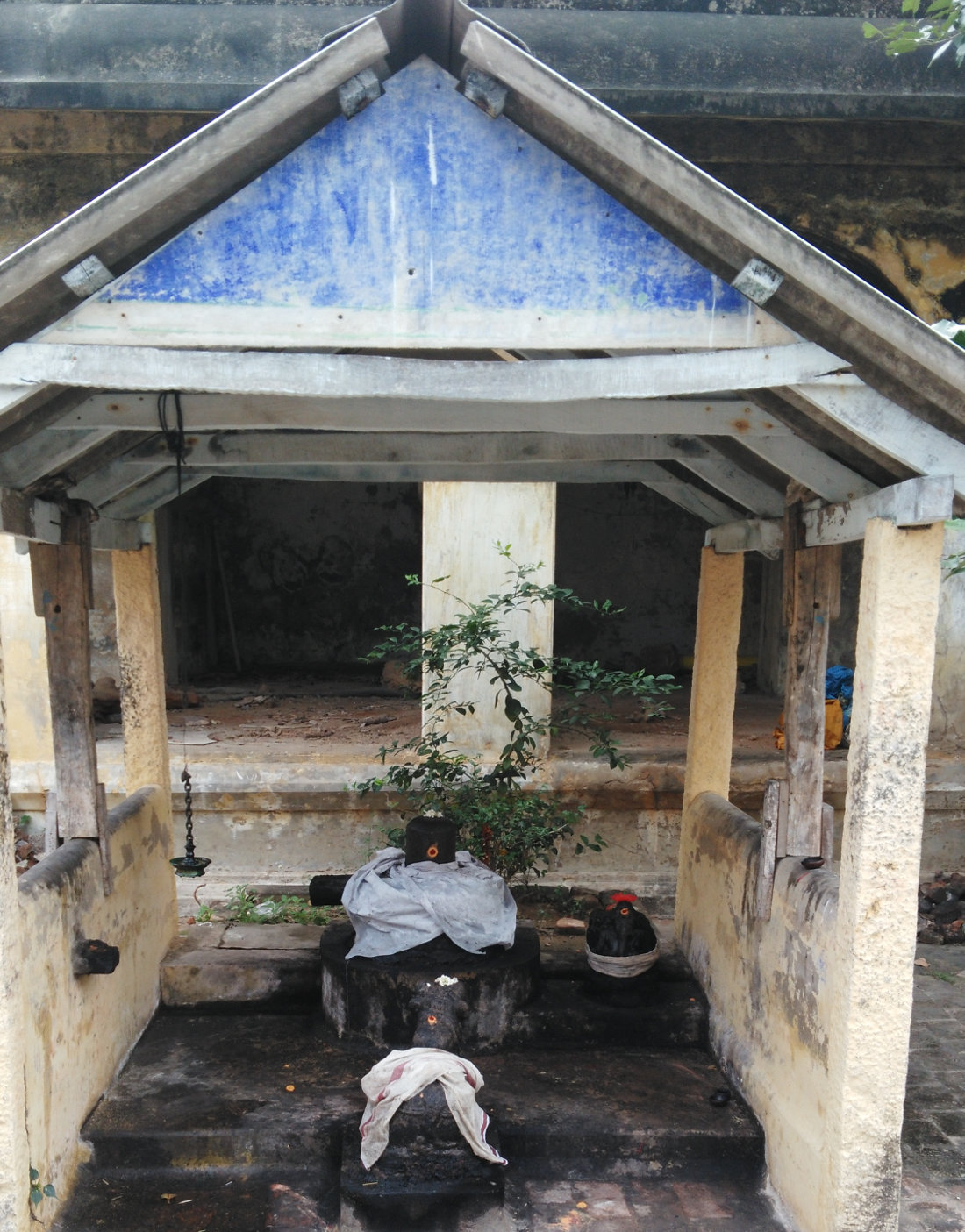 It is believed that Lord Suryan (Sun) worships Lord Shiva of this temple by directing his rays on the lingam every year for three days (23rd to 25th in the Tamil month of Maasi (Feb-Mar)) between 5.50 PM and 6.18 PM.

The hall (mandapam) where Lord Shiva and Lord Vishnu played the game of dice can still be seen. In this hall, there are beautiful paintings depicting this legend. 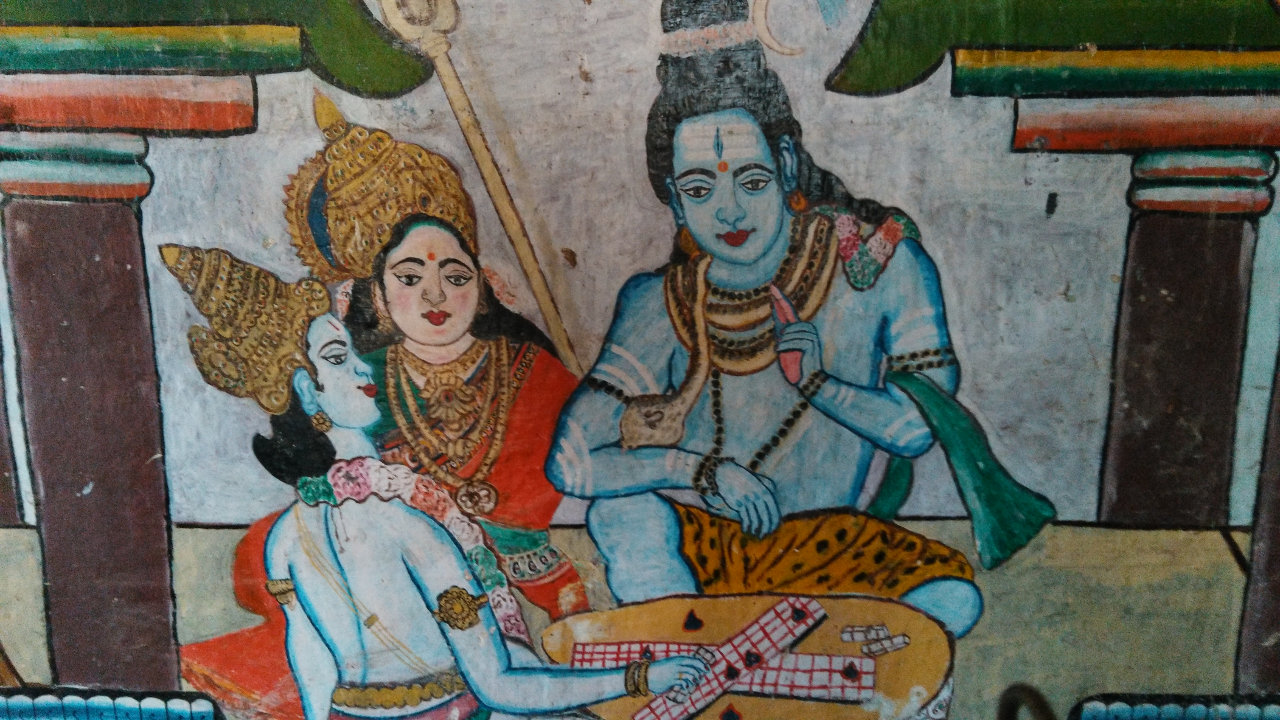 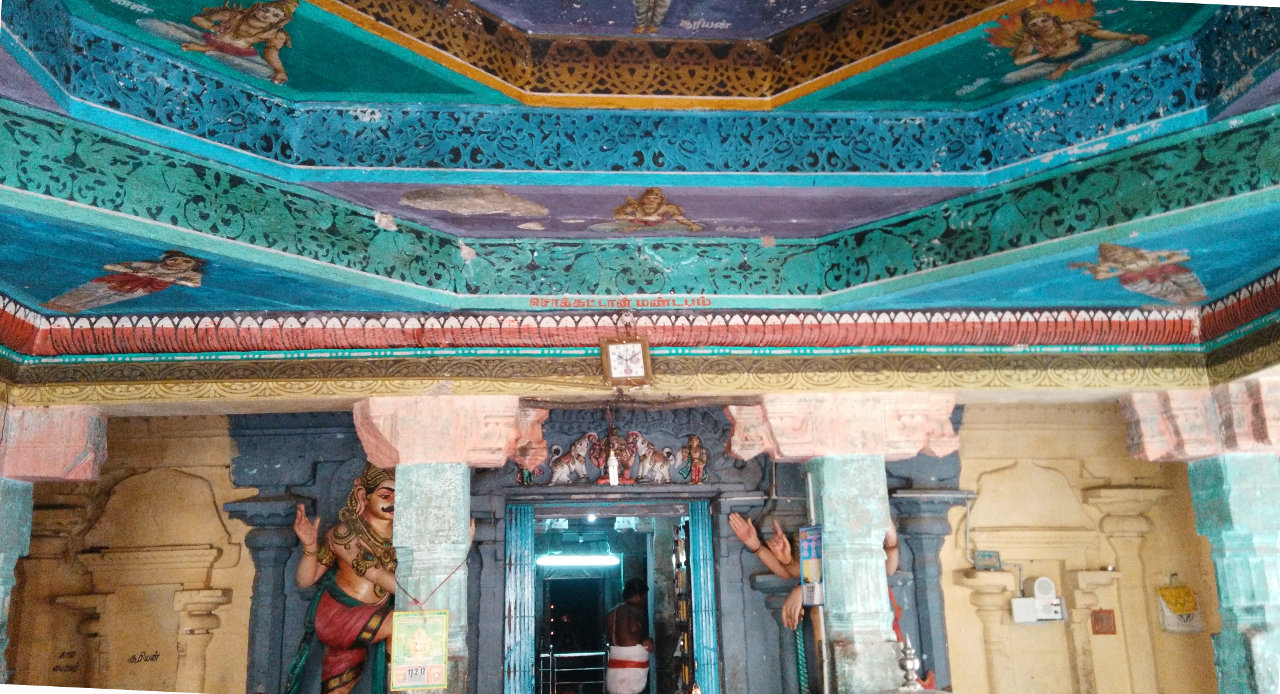 This is the birth place of the great Tamil poet Kambar, the author of Kamba Ramayanam. He is popularly known as “Kavichakravarthi”. The house where he lived is known as “Kambar Medu”. It is a memorial now and it is under the control of Archaeological Survey of India.

It is believed that those seeking wedding boon can pray to the lord here.

Couples with strained relations can pray to the lord here for relief and reunion.

10-day Brahmotsavam in the Tamil month of Chithirai is celebrated in a grand manner.

Other important festivals celebrated here are -

Shivrathri and Surya Pooja in the Tamil month of Masi (Feb-Mar). 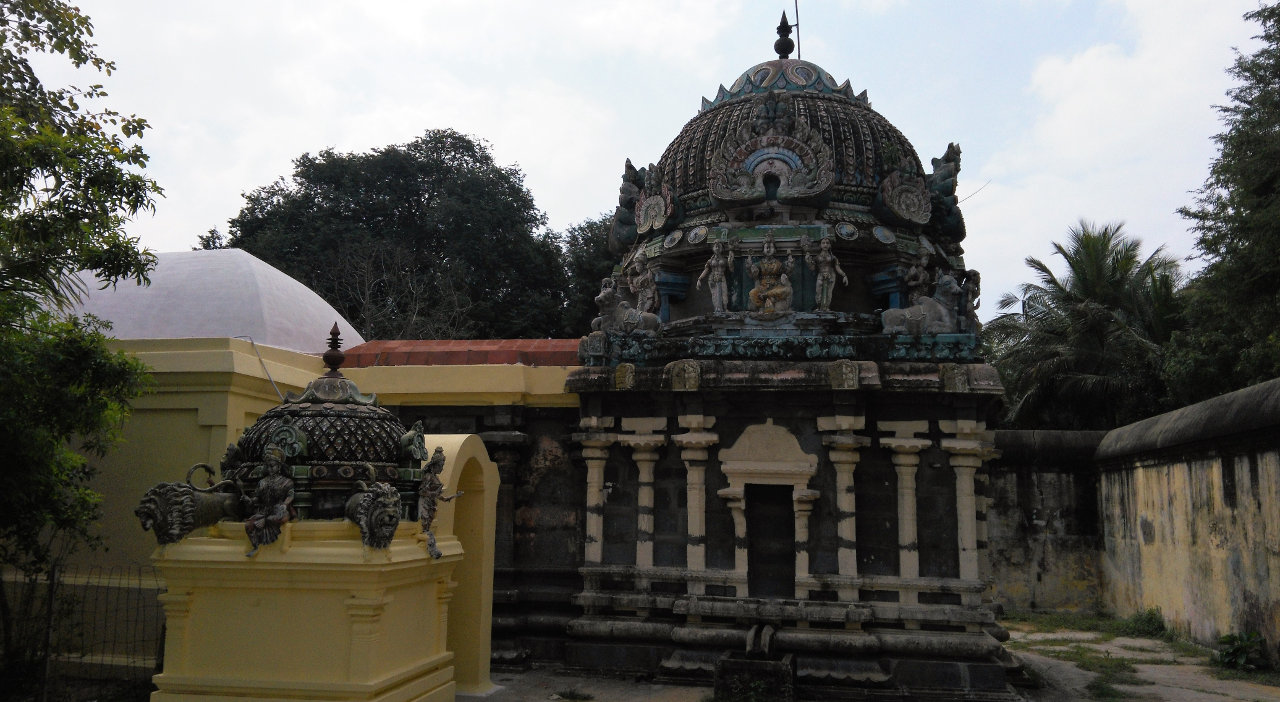 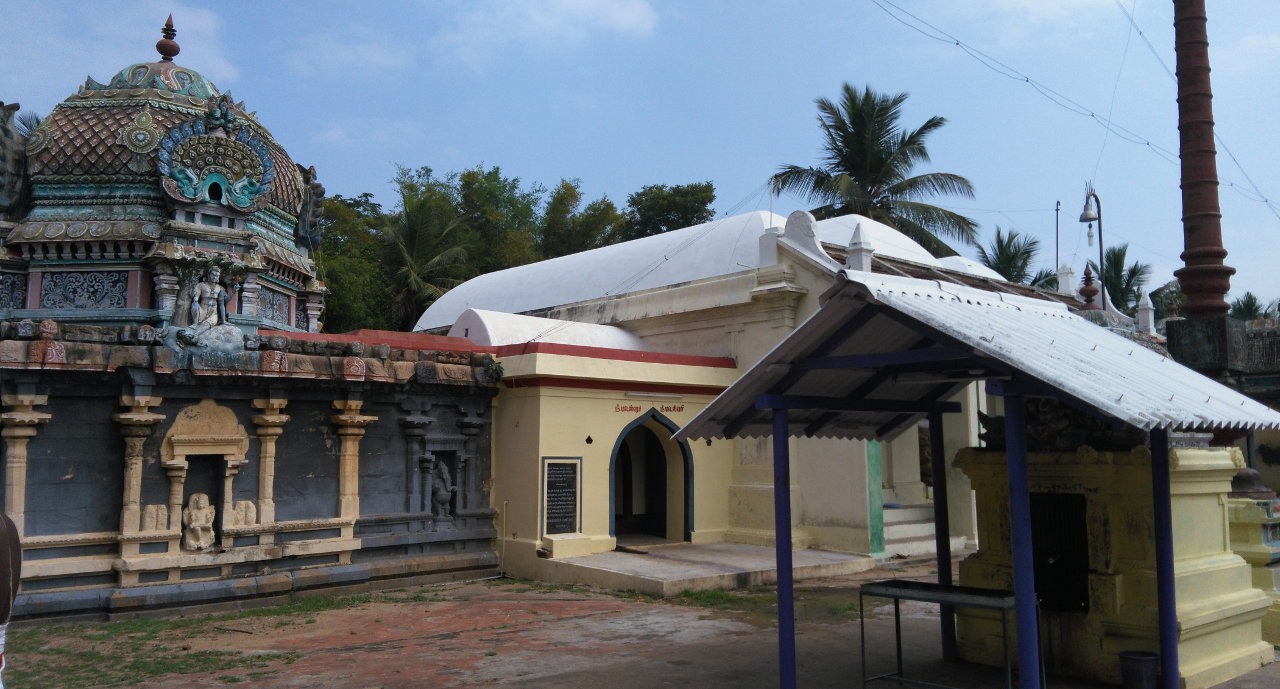