Thirumanikkuzhi is situated at a distance of about 10 kms from Cuddalore and about 5 kms from Thiruvahindrapuram on the Cuddalore to Panruti (via Palur) route.

The temple is situated on the southern banks of river Gadilam and at the foothill of the Capper hills. It is believed that this temple was renovated by the ancient emperors Thirisangu and Harichandra. It was also improved during the time of the Chola kings. The historical names of this place are Vamanapuri, Indiralogam and Bheemasangama Kshetram. 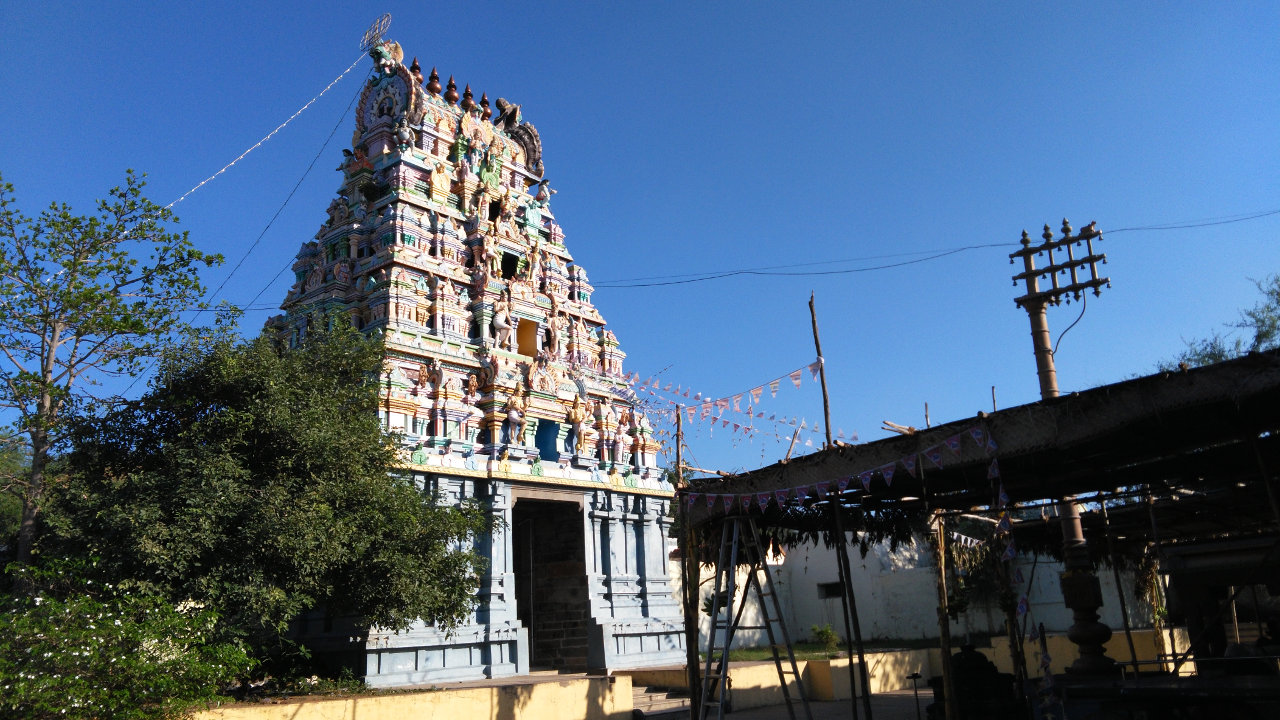 The legend of this temple involves Lord Mahavishnu and Mahabali Chakravarthy - the grandson of the celebrated Vishnu devotee Prahlada. It is believed that Mahabali was a rat in his previous birth. While eating the ghee from a lamp in this temple’s sanctum, it incidentally raised the lamp’s wicks which was about to burn out. Pleased that the rat had lit a lamp in the temple, Lord Shiva granted the rat a boon that it will be reborn in a family of asura (demon) kings. This is how Mahabali Chakravarthy came into existence.

Mahabali was very charitable by nature. He would be ready to offer assistance to anyone in need of help. The celestial gods were very jealous of him and they sought the help of Lord Mahavishnu to bring about his downfall. Lord Mahavishnu took the avtar of “Vamana Brahmmachari” to destroy Mahabali.

Vamana approached Mahabali seeking three feet of land which he readily offered. Lord Mahavishnu then took his Thiruvikrama avatar and measured the entire earth with a single step of his feet. His second step covered the entire space. He then asked Mahabali what he had to offer for the third feet. Left with no other option, Mahabali politely offered his head. Pleased with his devotion, Lord Mahavishnu pushed him down towards the underworld (“Pathalam”) and made him one of the “Chiranjeevis” - the immortals.

It is believed that Lord Mahavishnu came to this place as a bachelor (Brahmachari), and worshiped Lord Shiva at the end of his “Vaamana Avathar”, to seek respite from his “Brahmhathi dosham”. Since Vaamana was of small stature and he would not have been able to see Lord Shiva face, Lord Shiva took a smaller form and appeared inside a pit (pit is called “kuzhi” in Tamil) to enable Mahavishnu to worship him. Since Lord Mahavishnu worshipped the lord here as a bachelor (bachelor means “Maani” in Tamil) and since the lord appeared inside a pit (kuzhi), this place is called “Thiru Manikkuzhi” (“Thiru” is a respectful prefix). The lord here is praised as “Sri Manikkavarathar”.

It is believed that Lord Mahavishnu is always worshiping Lord Shiva here. He also requested Lord Shiva that there should not be any disturbances to his worship. Lord Shiva asked one of his “Sivaganams” (guards) -  Kubera Bheema Rudra, to stay back at this place, form a protective screen and protect Mahavishnu any interference. Lord Shiva also absolved Lord Mahavishnu of his sins. 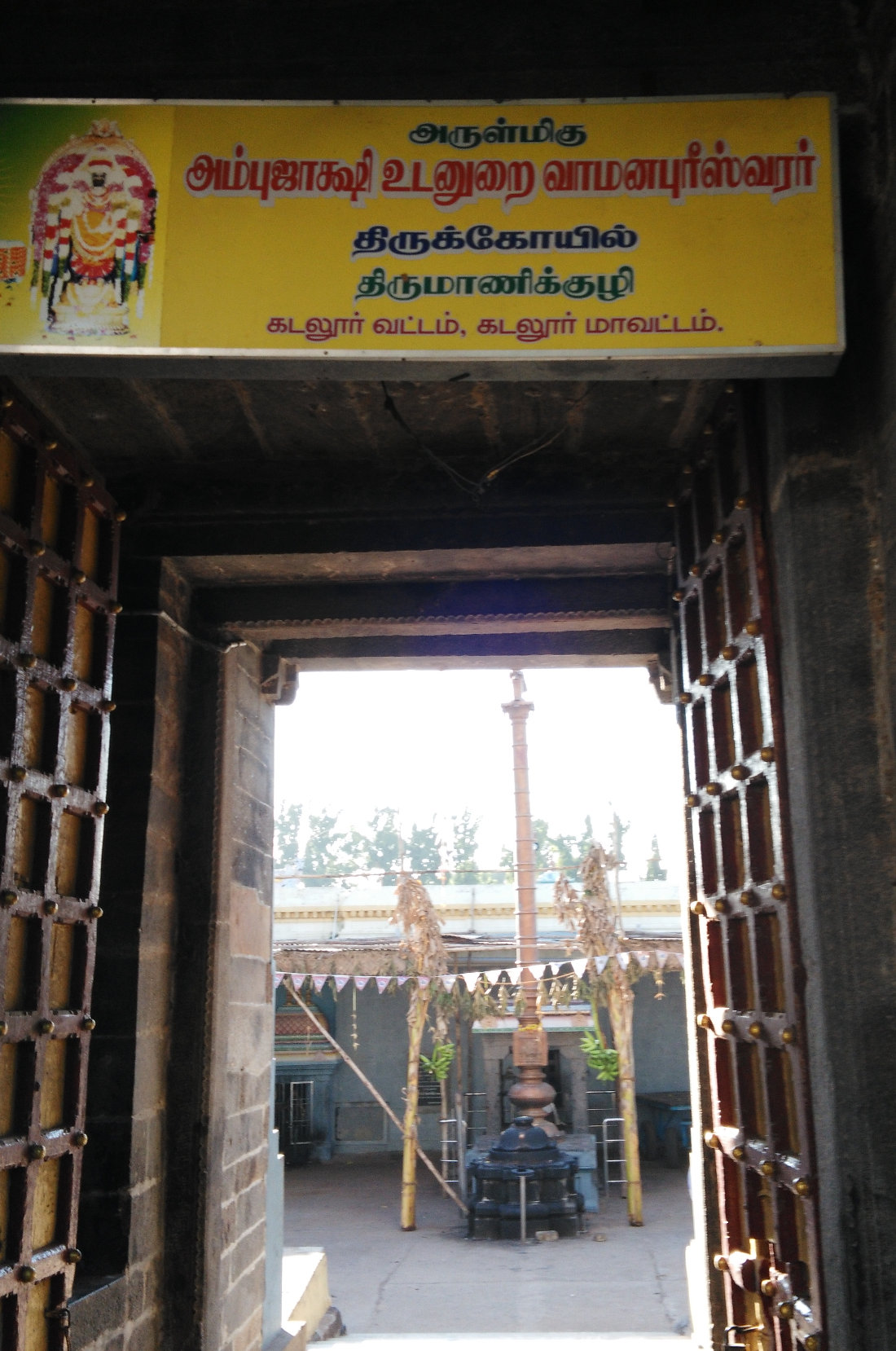 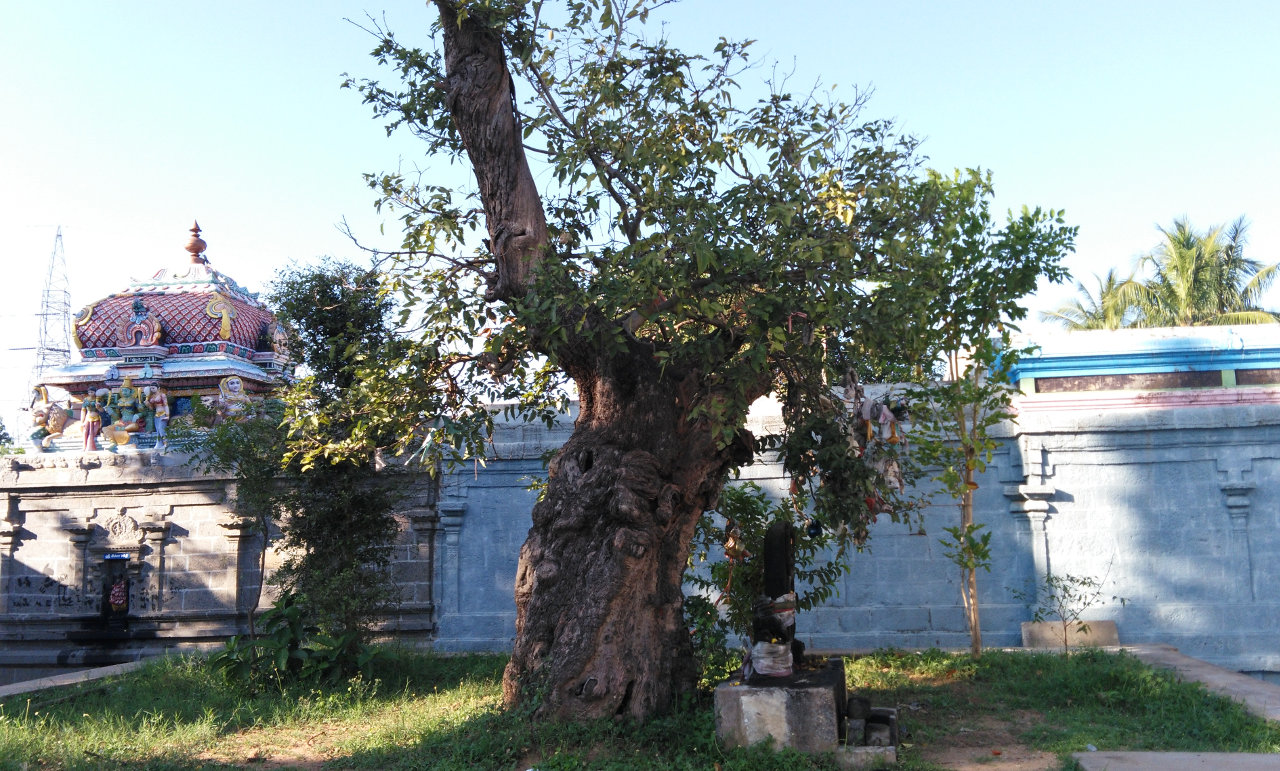 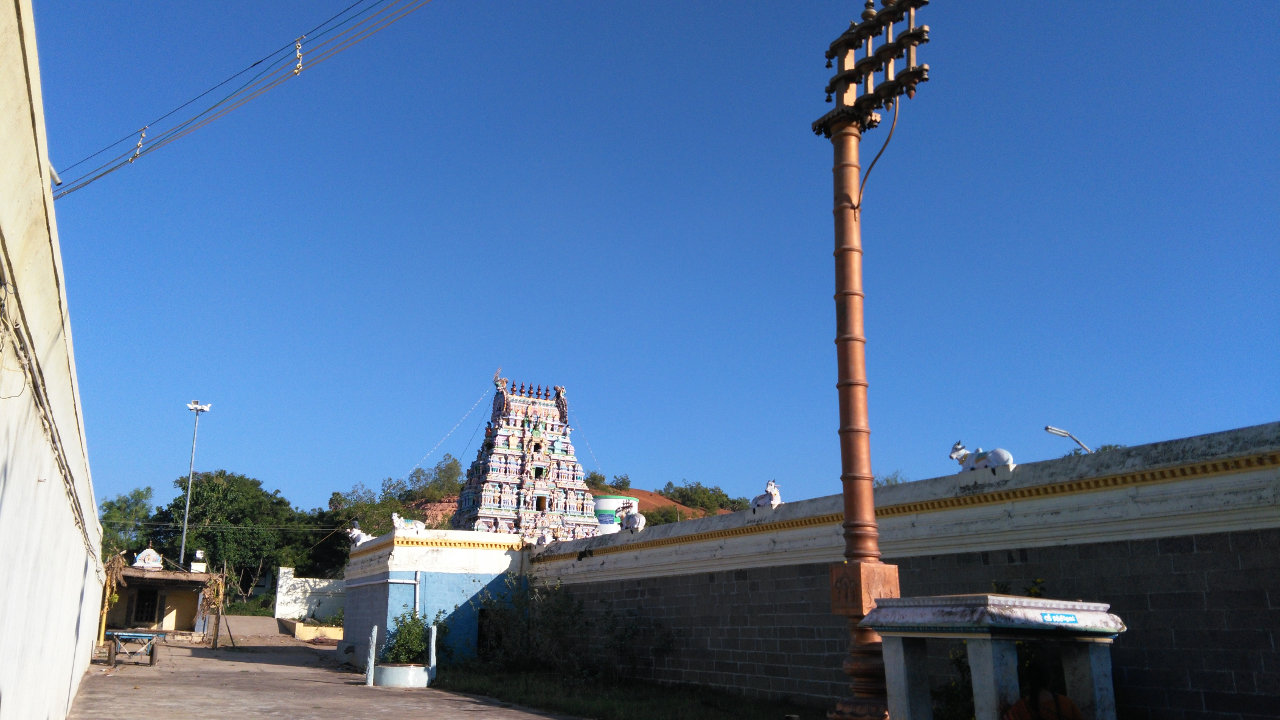 Another legend associated with this place is that Lord Shiva saved a north Indian merchant called Athri from thieves.  Hence the lord here is also praised as “Sri Udhavi Nayakar” and the Goddess Parvathy is called “Sri Udhavi Nayagi” (Udhavi means help in Tamil). This place was also earlier known as Udhavi. This has been mentioned in the stone inscriptions present in this temple. Saint Thirugnanasambanthar has referred to this place as “Udhavi Maanikuzhi” in his hymn of this temple.

There is another legend which states that this temple was raised by Lord Suryan (Sun God) to perform his poojas to Lord Shiva.

Gadilam River represents the grace of Goddess Mahalakshmi while Goddess Saraswathi flows in the form of the river Swetha. It is believed that Thirumanikkuzhi is the meeting point of both these rivers. 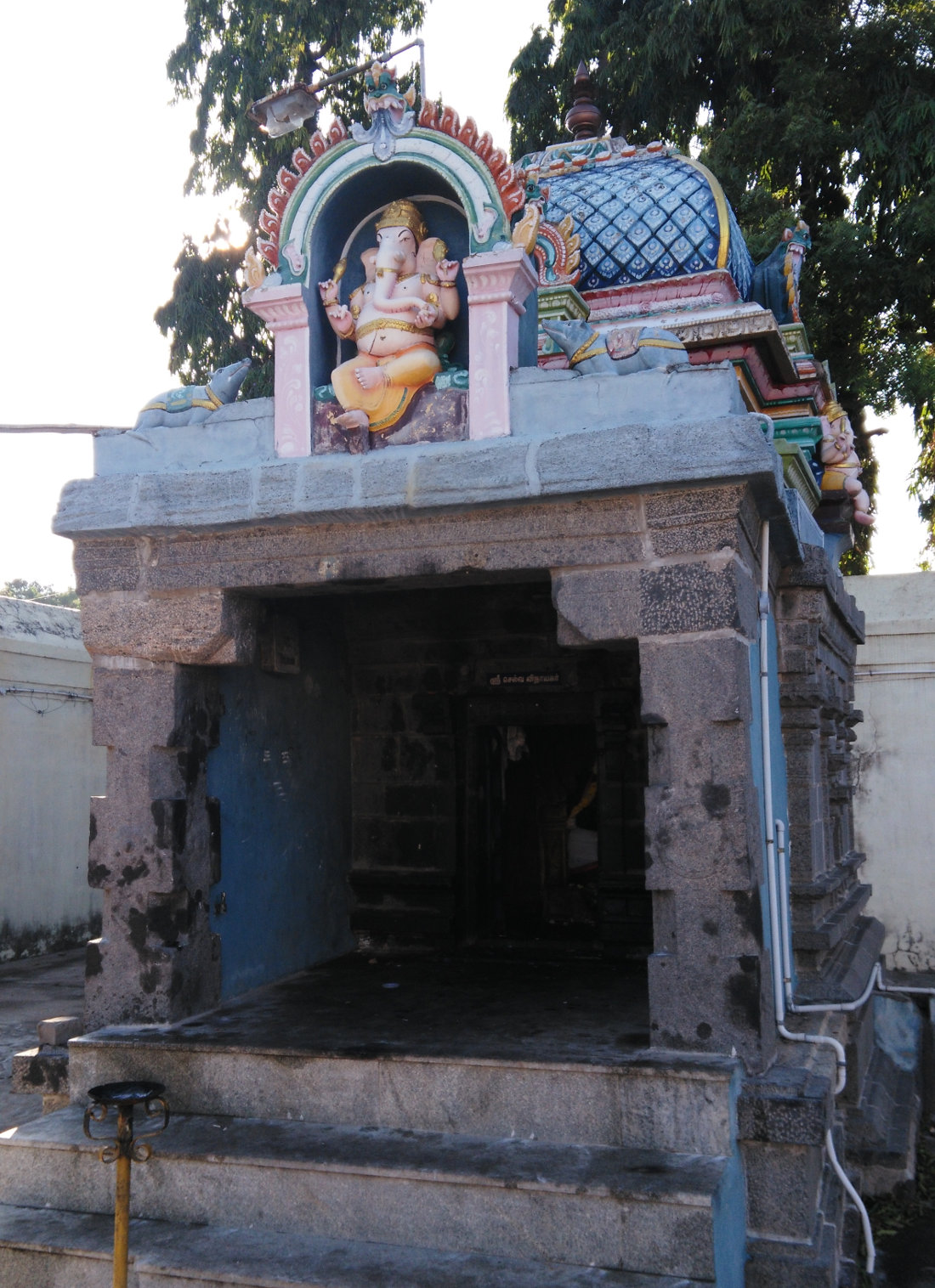 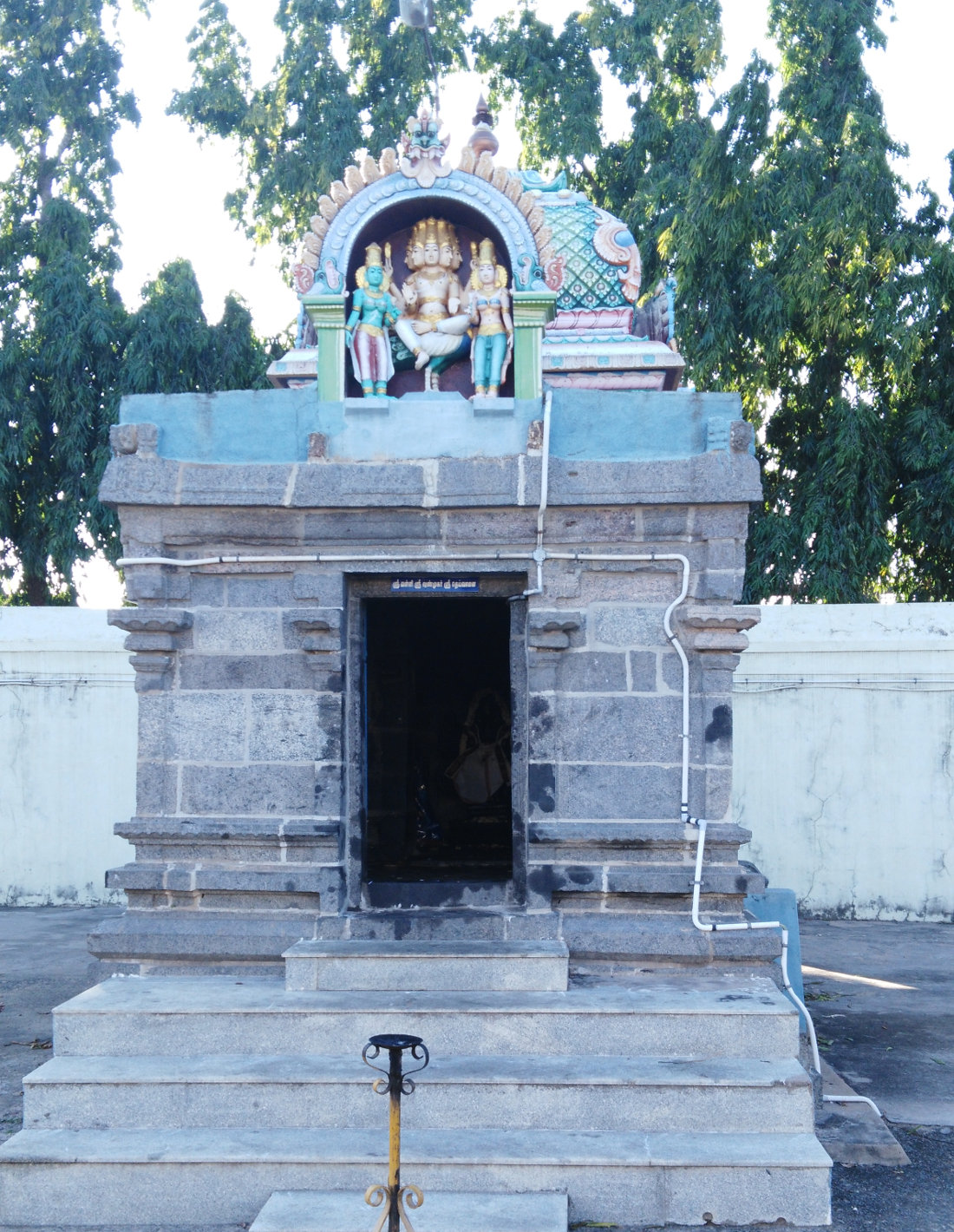 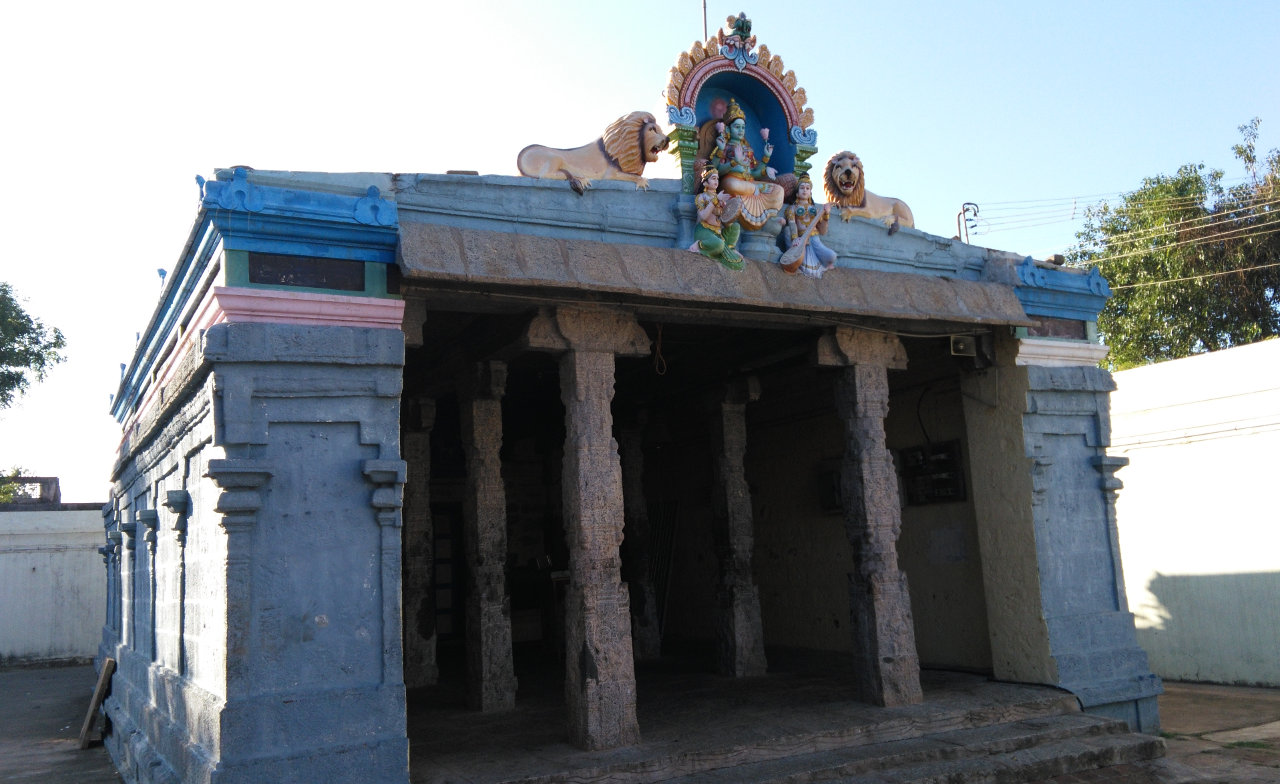 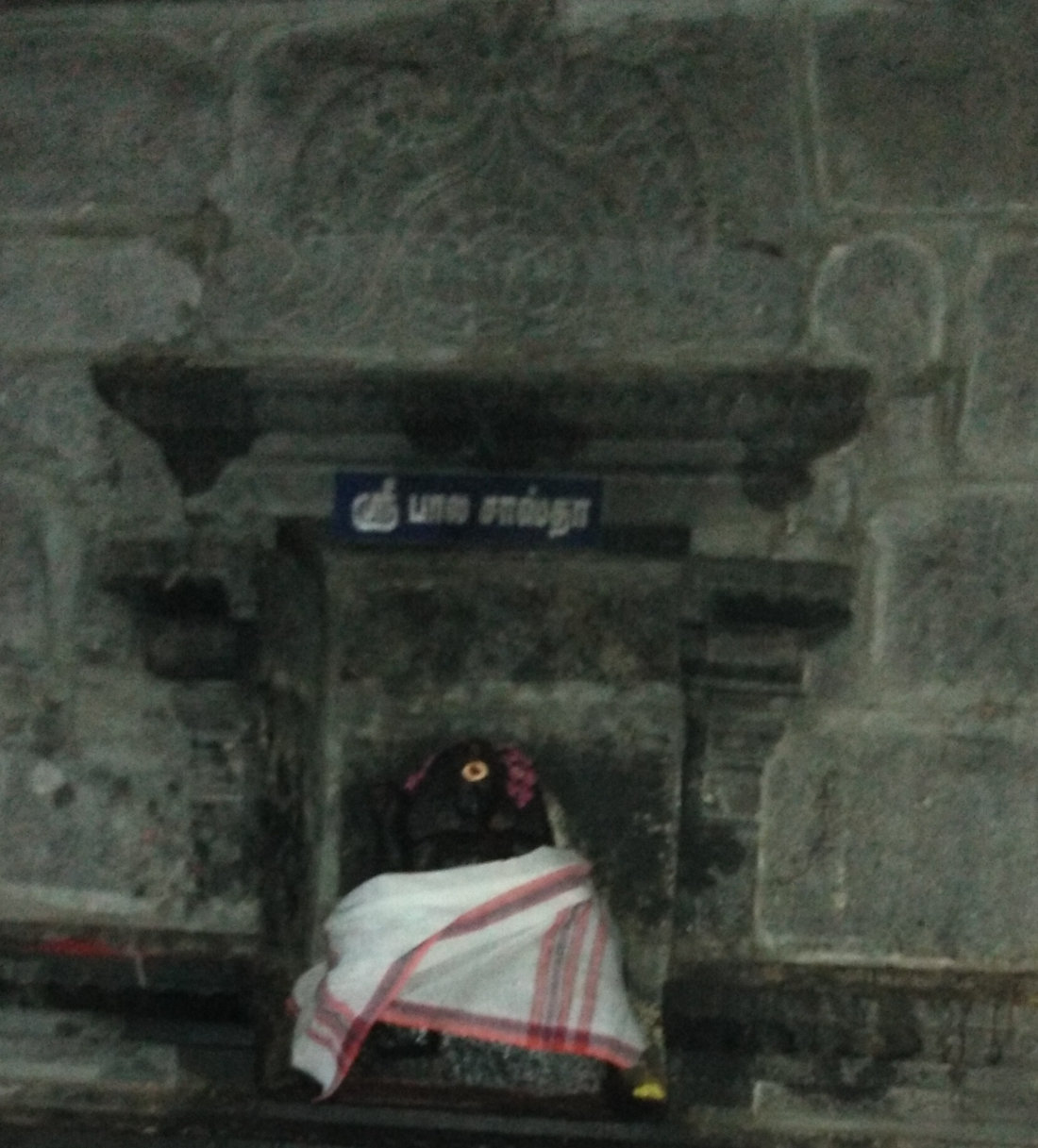 It is believed that Lord Shiva here is always present with Goddess Parvathy as “Shivashakti”. The sanctum sanctorum itself is considered to be the bed room (“Palliyarai” in Tamil) of Lord Shiva.

This is the only Shiva temple where you cannot have dharisanam of the lord without the help of a priest. Devotees can worship the lord for a matter of 2 minutes when the screen is removed. As per the Sthala puranam, it is believed that this 2 minutes’ worth of worship is equal to performing Shiva Pooja for 12 days. If this darshan happens on a Prodosham day, it is considered to be equivalent to worshiping 3 times at Chidambaram, 8 times at Thiruvannamalai and 16 times at Banaras (Kasi).

This temple is considered to be significant for its three important attributes – Murthy, Sthalam and Theertham - glory of Lord, sacredness of the land and the auspicious temple theertham.

The legend (Sthala Puranam) related to Lord Mahavishnu’s Vamana Avtar and Mahabali Chakravarthi is beautifully chiselled on the front entrance wall of the sanctum. 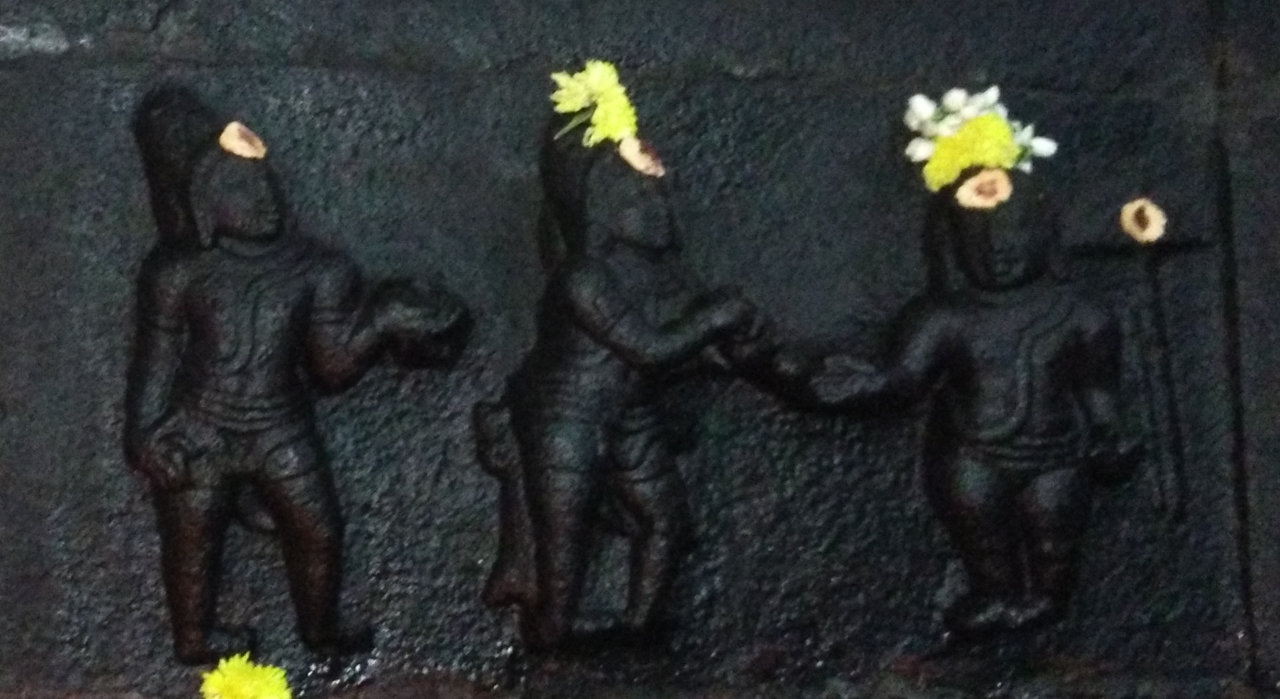 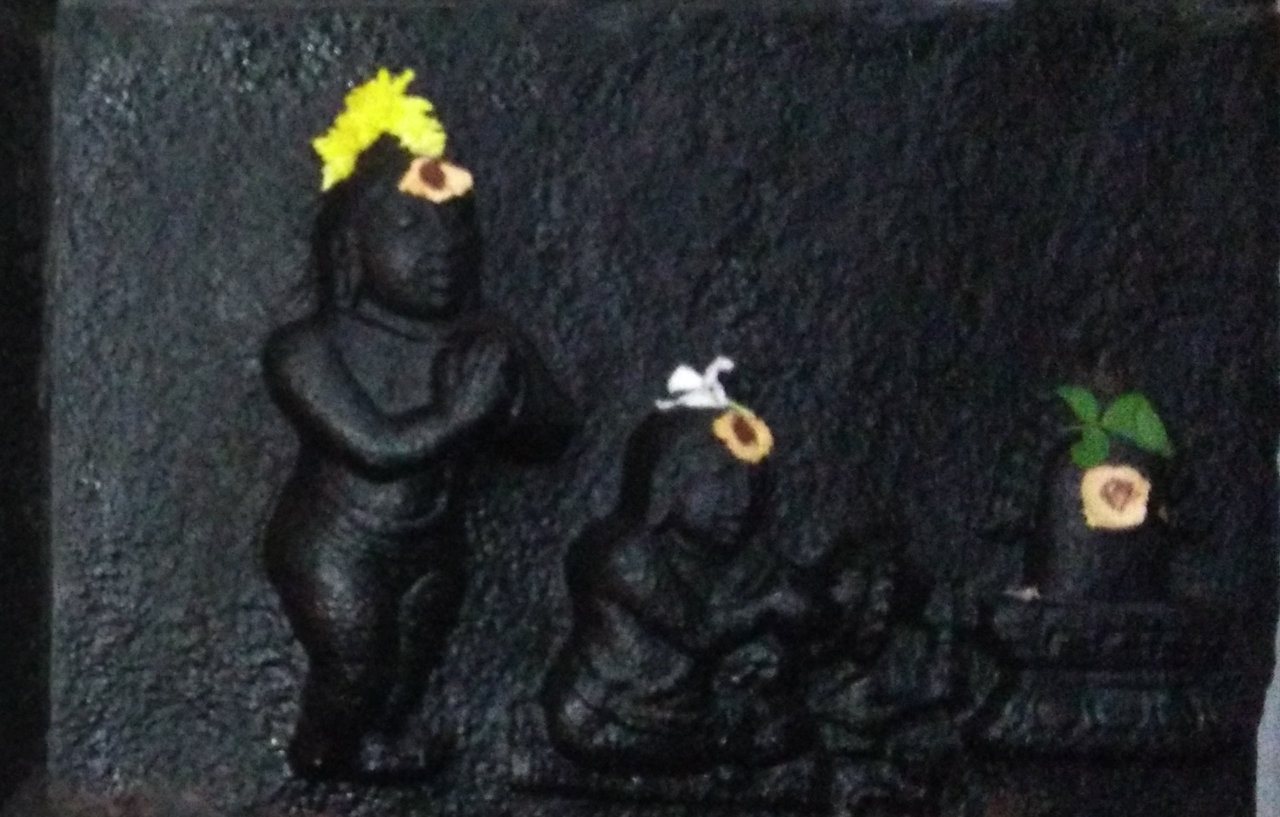 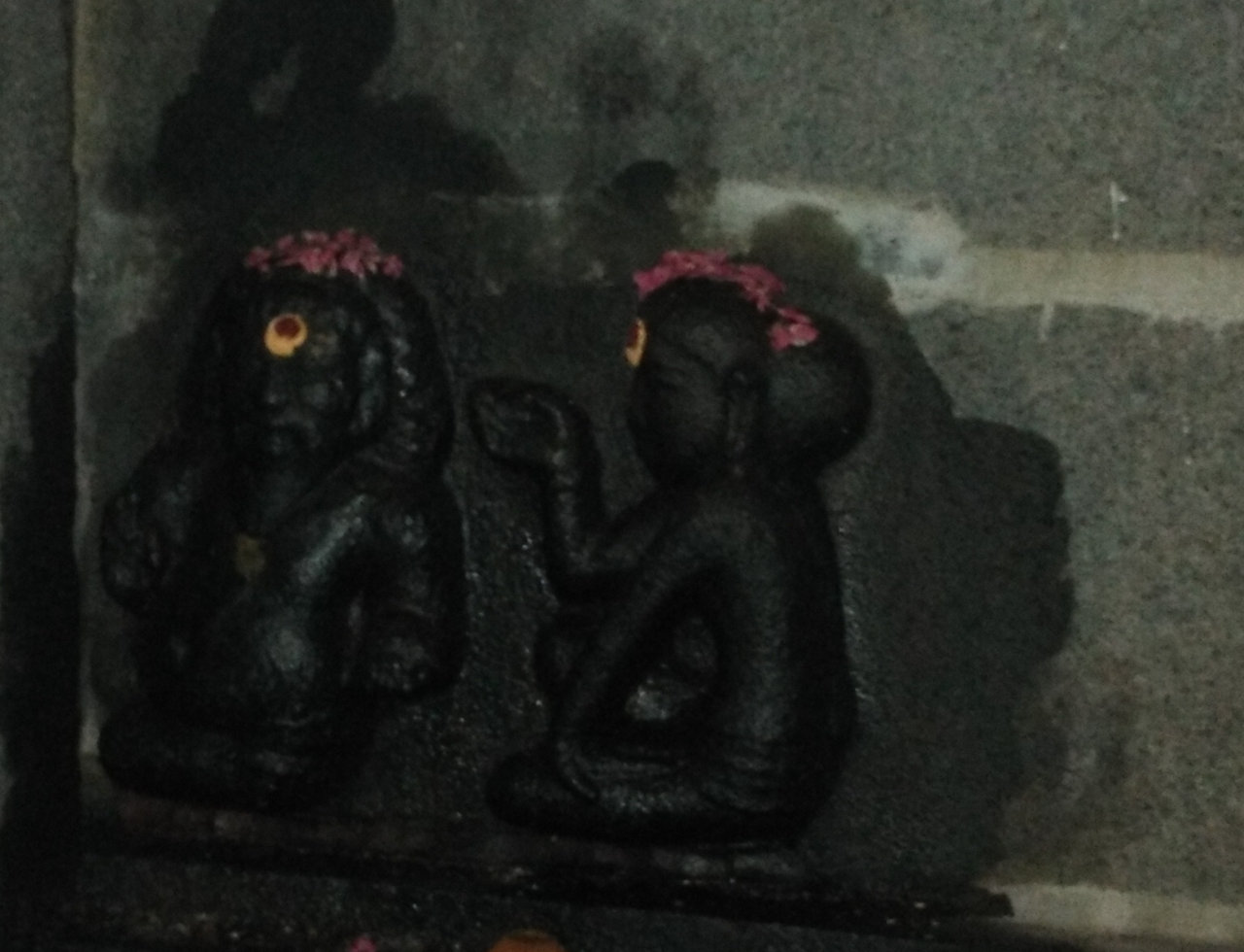 Goddess Parvathi is holding two flowers in her hands - Lotus and Neelotpala. It is believed by devotees that worshiping the Goddess here would lessen their woes.

The Sthala puranam also says that Lord Dakshinamurthy here was worshiped by the Naga Devars and they were blessed with his discourses.

It is also believed that Markandeya visited and worshiped the lord here before visiting Thirukkadaiyur.

This temple’s Sthala viruksham, Kontrai tree is very old and is said to have existed through the previous yugas.

Devotees seeking “Santhana Prapthi” (child boon) come here and worship Goddess Ambujakshi. There is also a procedure involved in this worship. The devotees are advised to circumambulate the shrine eleven times wearing wet clothes on a new moon day. They are also advised to offer butter as “naivedhyam” and consume it for 45 days.

The important festivals celebrated in this temple are as follows -

Maha Shivrathri in the Tamil month of Masi (Feb-Mar),

During the Brahmotsavam, a lamp (called the moksha lamp) is lit on a hill opposite to the temple. This hill is called Jyothigiri or Rathnagiri.

On the day of the Rohini Nakshatram, thousands of devotees undertake Girivalam (circumambulation of the hill). This is similar to the Girivalam that takes place in  Thiruvannamalai temple on full moon days (Purnima). 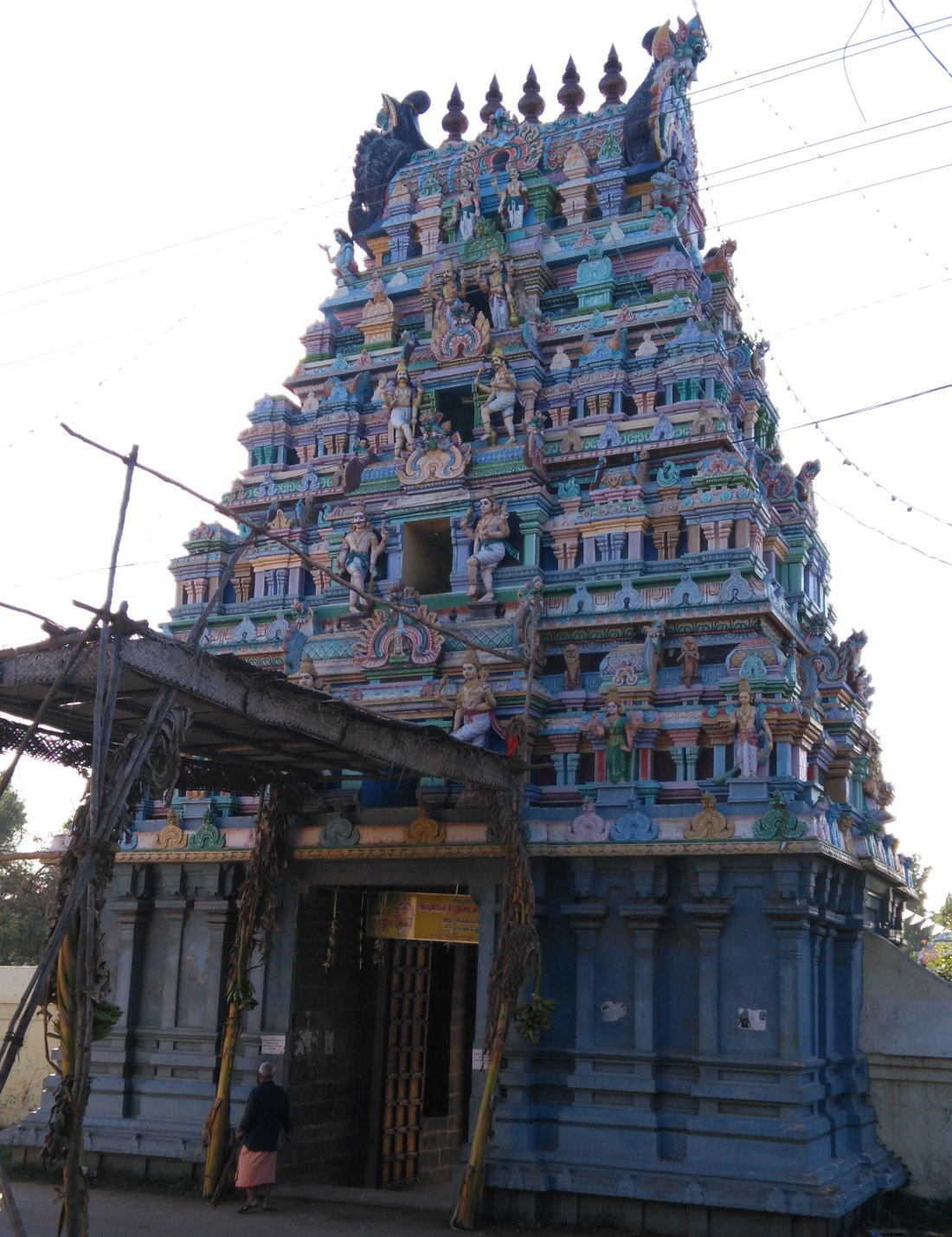