Thiru Valampuram is situated at a distance of about 12 kms from Sembanarkoil and 6 kms from Poompuhaar. It is situated near Kadaimudi on the bus route of Mayiladuthurai to Poompuhar. It is about 2 kms from Keezhaperumpallam (one of the famous Navagraha temples).

As per the Sthala Puranam, this ancient temple is believed to be more than 2000 years old and it was originally constructed by King Abhisithu of Dravida kingdom. The king worshiped the lord here and was blessed with a child.

Also, the nearby place Kaveripoompattinam (Poompuhar) is very famous as it is surrounded by seven forests (“Vanam”) and seven temples. They are –

Thala vanam (this place) is considered as the Ganapathy sthalam,

Chaya vanam is considered to be Lord Shiva’s abode,

Pallava vanam is considered to be Goddess Parvathy sthalam,

Vellai vanam (Thiruvengadu) is considered as the Natarajar sthalam,

Mathanga vanam (Thiru Nangoor) is considered as the Murugan sthalam and

Of the 276 Paadal Petra Shivasthalams, very few temples have Palm tree (Panai) as their Sthala Viruksham. This temple is one of them. Some of the others are Panaiyur, Panankattur, Puravaar Panankattur, Cheyyar, Thirumazhapadi and Thiruppanandal.

There are six stone inscriptions in this temple which date back to the periods of Chola kings Vikraman, Rajathirajan-II and Kulothungan-III. 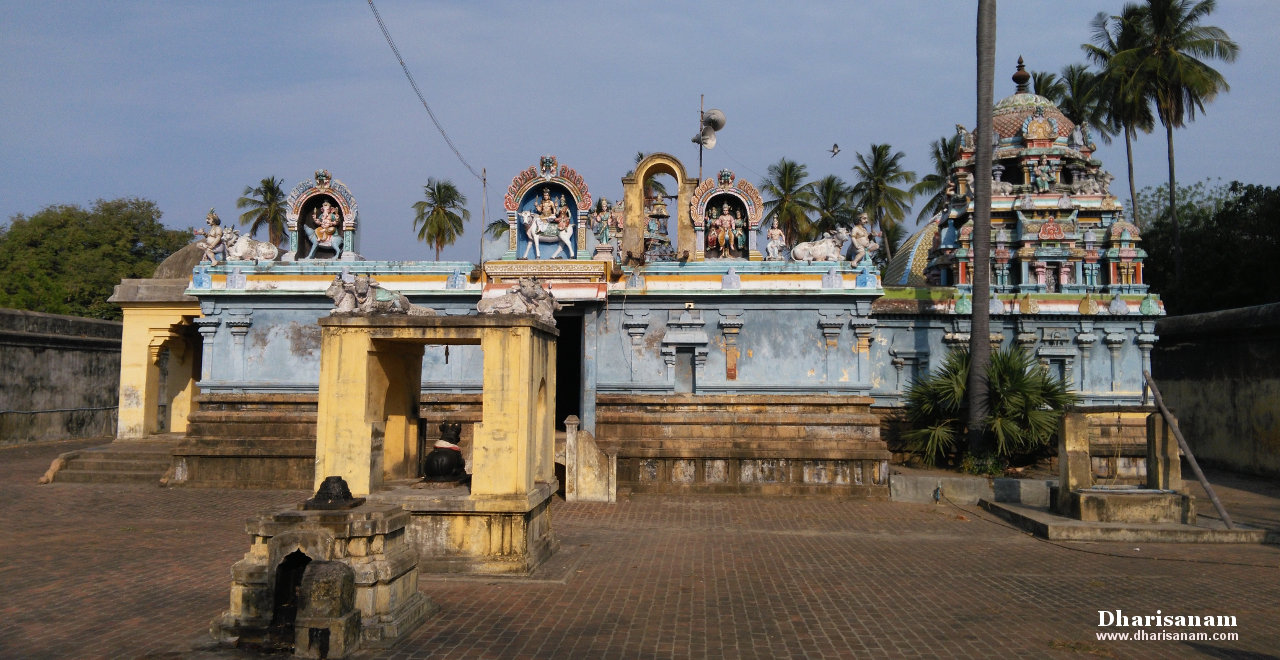 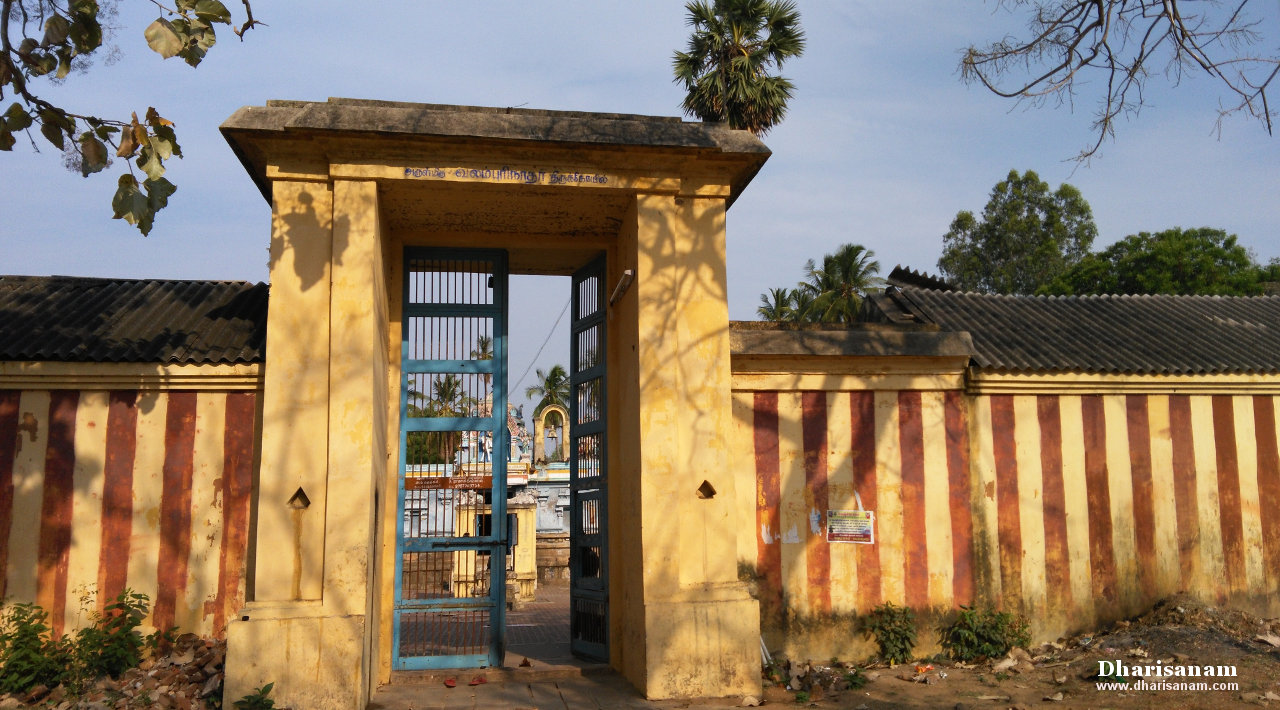 Lord Shiva’s lingam here is made out of sand (“Pruthvi”) and therefore abishekam is performed only after placing a cover (kavacham) on it. Also, there are two holes on top of the lingam. Hence this place also gets the name “Mela Perumpallam” (“Mela” meaning top and “perumpallam” meaning “big holes” in Tamil). Only “Punugu” (civet) is applied to the lingam once in a while. The lingam is always covered with metal sheet (“kavasam”).

As per the Sthala Puranam of this temple, Lord Mahavishnu worshiped Lord Shiva here to receive a conch (Valampuri Sanghu) as a blessing. Before embarking for his penance, Vishnu left Goddess Lakshmi here to assist Goddess Parvathi. Lord Shiva was very pleased with his penance and gave him the “Chakrayudam” and “Ghatha” (club and the discus) as gifts. When he came back to this place to take Goddess Lakshmi, Goddess Parvathy gave him the conch and the lotus (Pathmam). Hence this place gets the name Valampuram.

Another legend associated with this place is that of Heranda (Athreyar) Maharishi. Once, in Thiruvalanchuzhi, Aadhiseshan came out from the “Padhala logam” (underworld) on a Shivarathri day to worship Lord Shiva. A huge hole (“phila dwaram”) formed at the place where Aadhisheshan came out. Since river Cauvery was flowing through this place, she entered this hole and fell into the underworld. The Chola king who ruled from Kumbakonam, Harithuvajan got worried about this and prayed to Lord Shiva. It is believed that at this point the lord’s divine voice was heard saying that a king or a sage has to sacrifice his life by entering into the hole so that the river can come back to earth. The king also sought the advice of Sage Heranda Maharishi who was performing penance in this place. The sage confirmed the divine voice.  When the king decided to get into the hole for the welfare of the people, the sage stopped him and he himself entered into the hole and brought Cauvery back to earth. The place where the river came back to earth is called “Mela Cauvery”, near Kumbakonam. Although he entered into the underworld at some other place, it is believed that he came back to the earth in this place. He worshiped the lord here for some time and attained salvation. There is a shrine for Heranda Maharishi (“Jeeva Samadhi”) in front of this temple. In this shrine, there is also a Shivalingam that is believed to have been worshiped by this Maharishi. 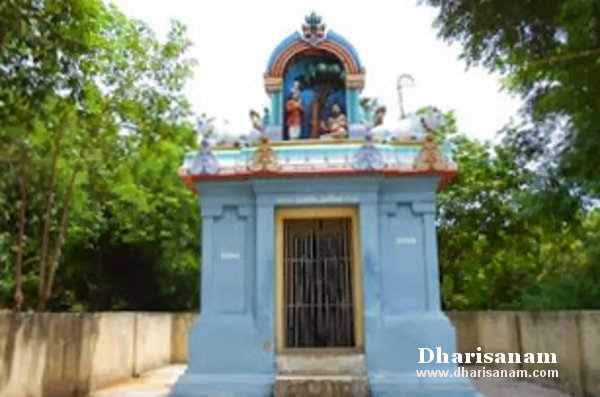 Another legend is that of Dhananjaya, a king from the Magadan empire. It is believed that he had instructed his son to dissolve his ashes after his death in some holy water (Theertham) where it could blossom into flowers. His son, King Dakshina, and his wife travelled to many Shiva temples in search of such a holy theertham. When he visited this place, the ashes turned to flowers. His son dissolved the ashes in this temples theertham and worshiped the lord here. The idol of the king and his wife can be seen in this temple. As per the Puranas, this temple is considered as holy as Banaras (Kasi).

Another legend is that a king from Kasi wanted to test the fidelity of his queen. While camping in the forests, he asked his minister to inform his wife that he was killed by a tiger during the hunt. Unable to bear the shock, the queen instantly died. For causing the death of a chaste wife by false information, the king was afflicted with “Brahmahathi dosham”. The king consulted many learned pundits in order to seek absolution for his sins. He was advised to feed (provide “Annadhanam” for) 1000 brahmins every day in this place (Thiruvalampuram). They further advised the king that he should hang a big bell in front of his palace and that it will automatically ring whenever a sage takes the food.

The king followed this advice and set up a “dharamshala” where the Annadhanam took place. One day, Saint Pattinathar came to this temple and asked the people in the kitchen to give him food. They refused to offer him food as he did not look like a brahmin. With nothing else to eat, Pattinathar drank the water that is drained from cooked rice (“Kanji” in Tamil). Surprisingly, the bell began to ring. Everyone was astonished to hear the bell ringing even before the Annadhanam had started. The king rushed to the dharamshala and saw Pattinathar smiling there. The king understood the greatness of the sage and fell to his feet asking for forgiveness. It is believed that the king was relieved from his dosham immediately. To commemorate this event, a festival is celebrated in this temple even now.

It is believed that Dakshan and his wife performed penance here to be blessed with a daughter. It is believed that Goddess Parvathy was born to them here on a “Maham” star day in the Tamil month of Maasi. They named her as Dhakshayini.

Lord Shiva granted darshan to Saint Thirunavukkarasar in this place during his pilgrimage along with Saint Thirugnanasambanthar.

It is believed that Suryan was blessed with the darshan of Mount Kailash from here itself by Lord Shiva.

Other than the shrines of Lord Shiva and Goddess Parvathy, shrines and idols of Vinayagar, Murugan with his consorts, Natarajar, Somaskandar, Pitchandavar, Naalvar, Nagar, Viswanathar (Shivalingam worshiped by Lakshmanan), Ramanathar (Shivalingam worshiped by Lord Ram), Gajalakshmi, Saptamadas, Suryan, Kala Bairavar and Saneeswarar can be seen in the main hall and in the corridors.

In the “koshtam” (place surrounding the sanctum sanctorum), idols of Vinayakar, Dakshinamurthy, Mahavishnu, Brahma, Durgai and Chandikeswarar can be seen.

There is also an idol of king Dhakshina Maharaja and his wife in the corridor. 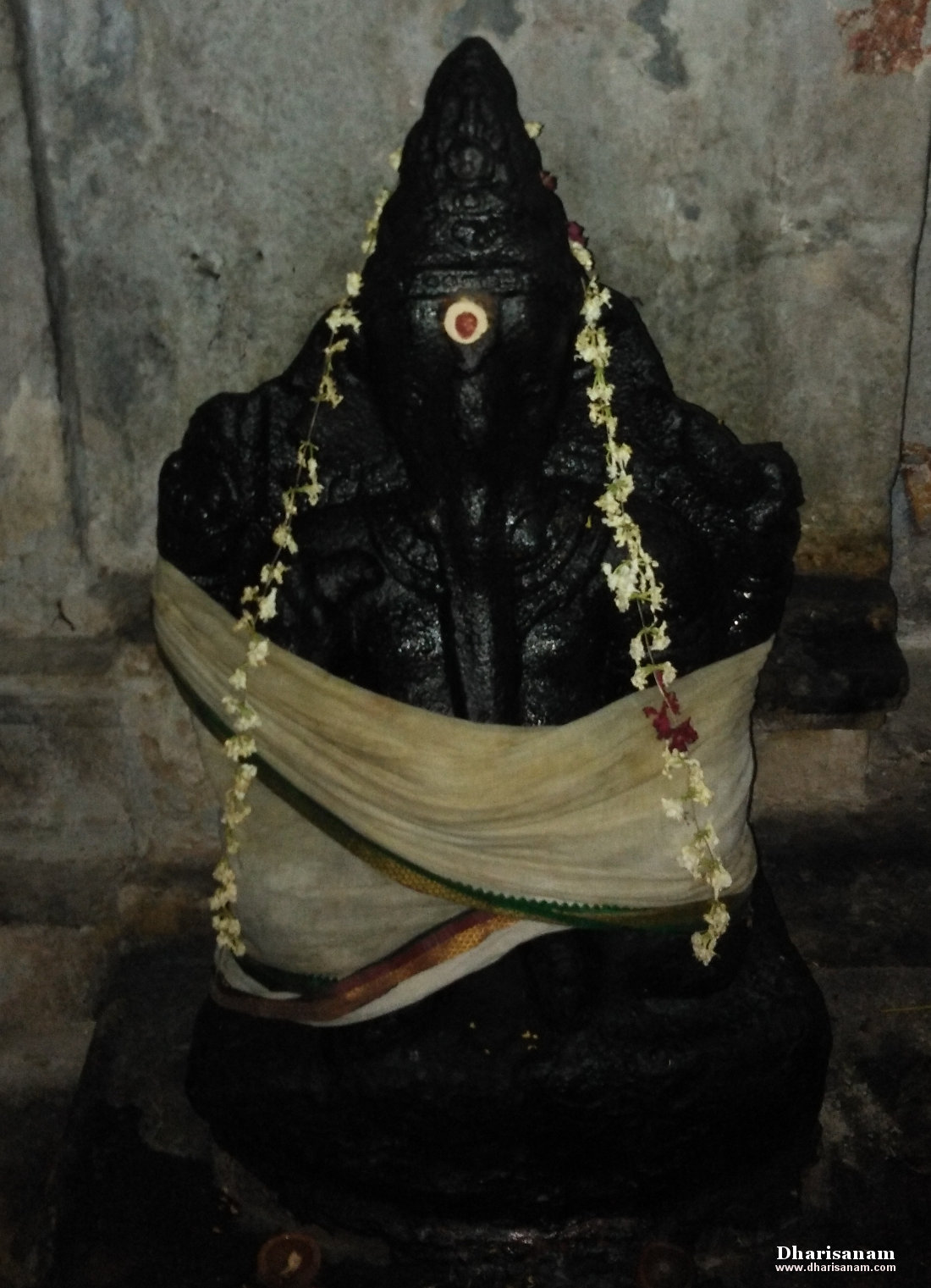 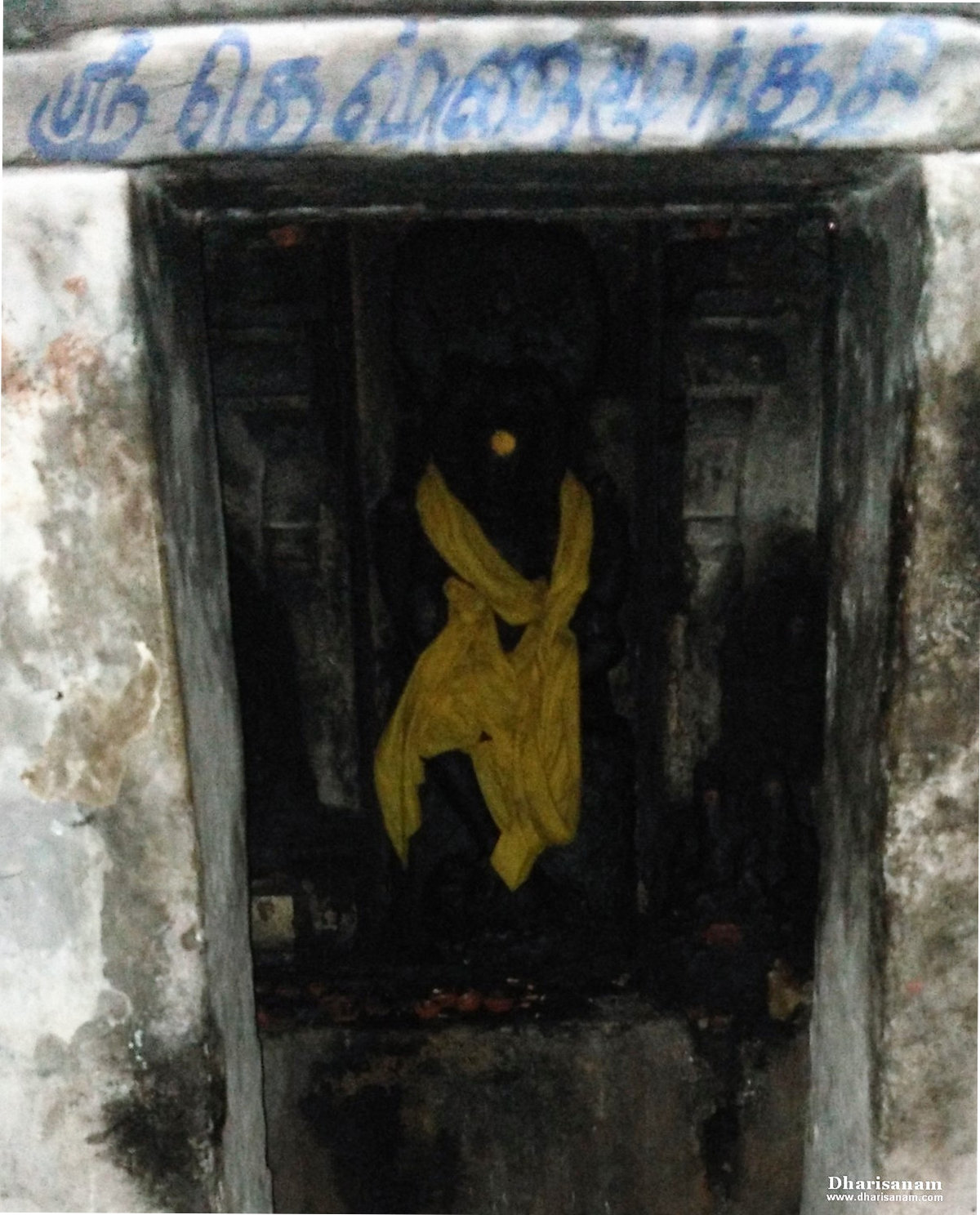 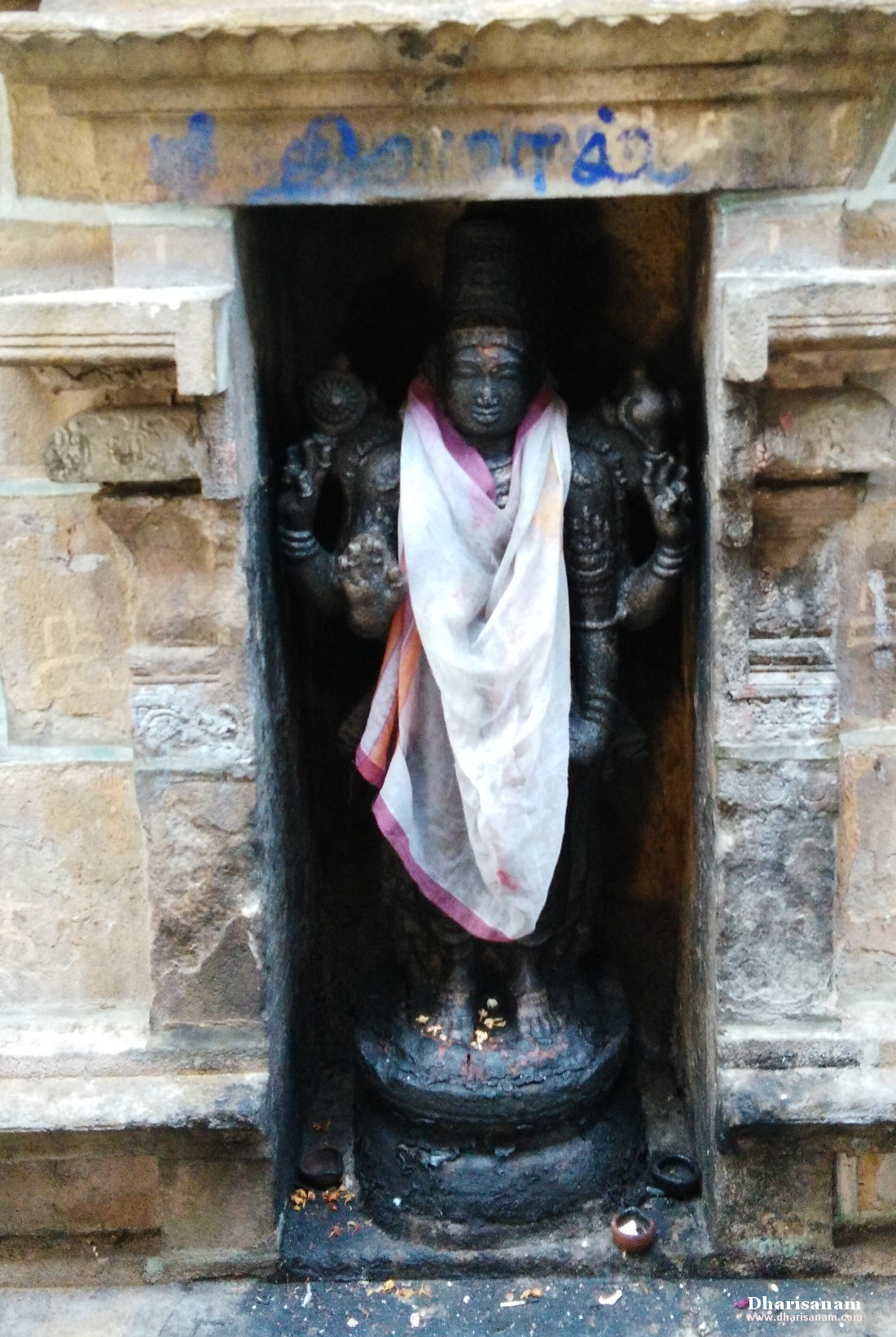 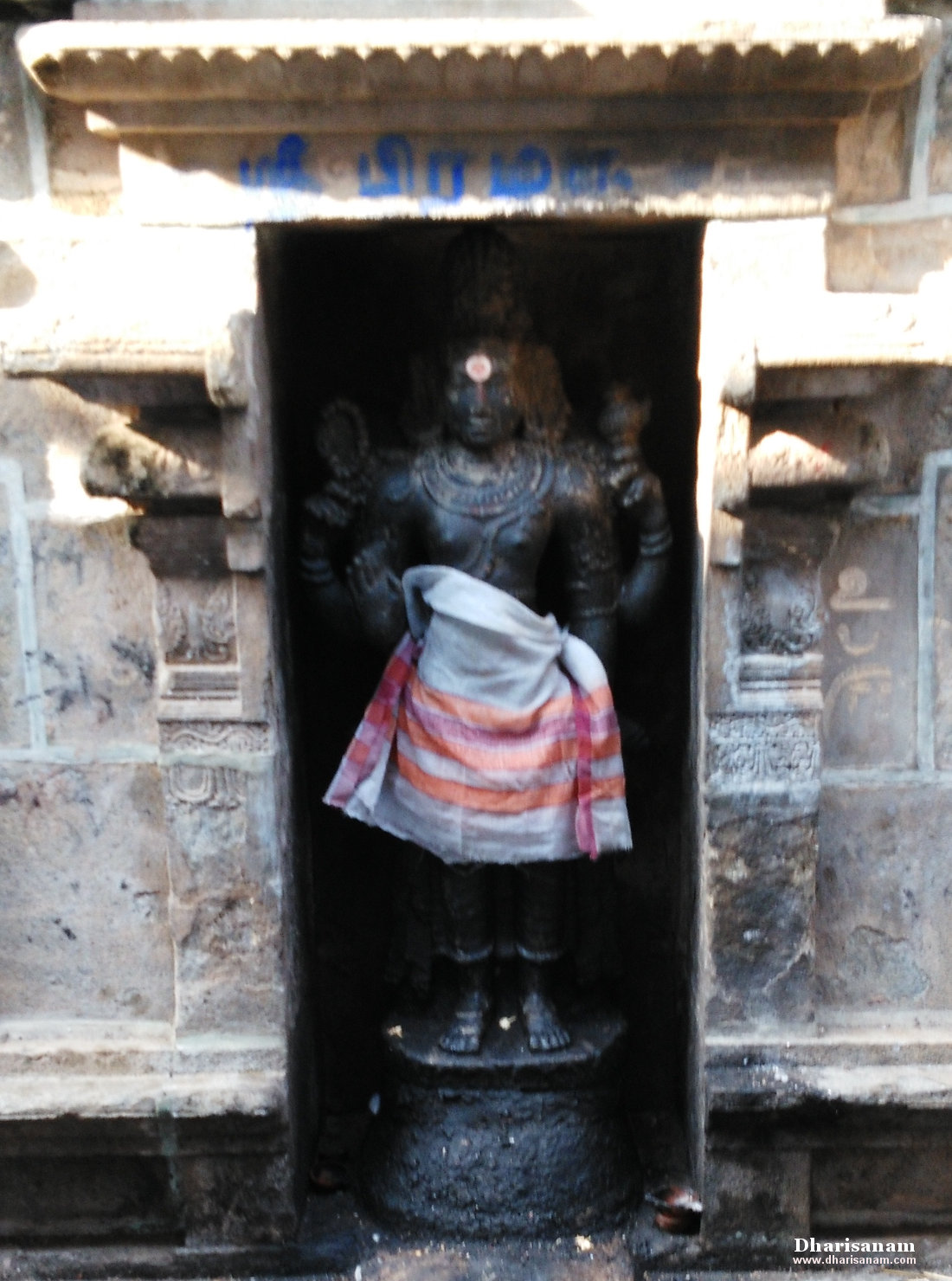 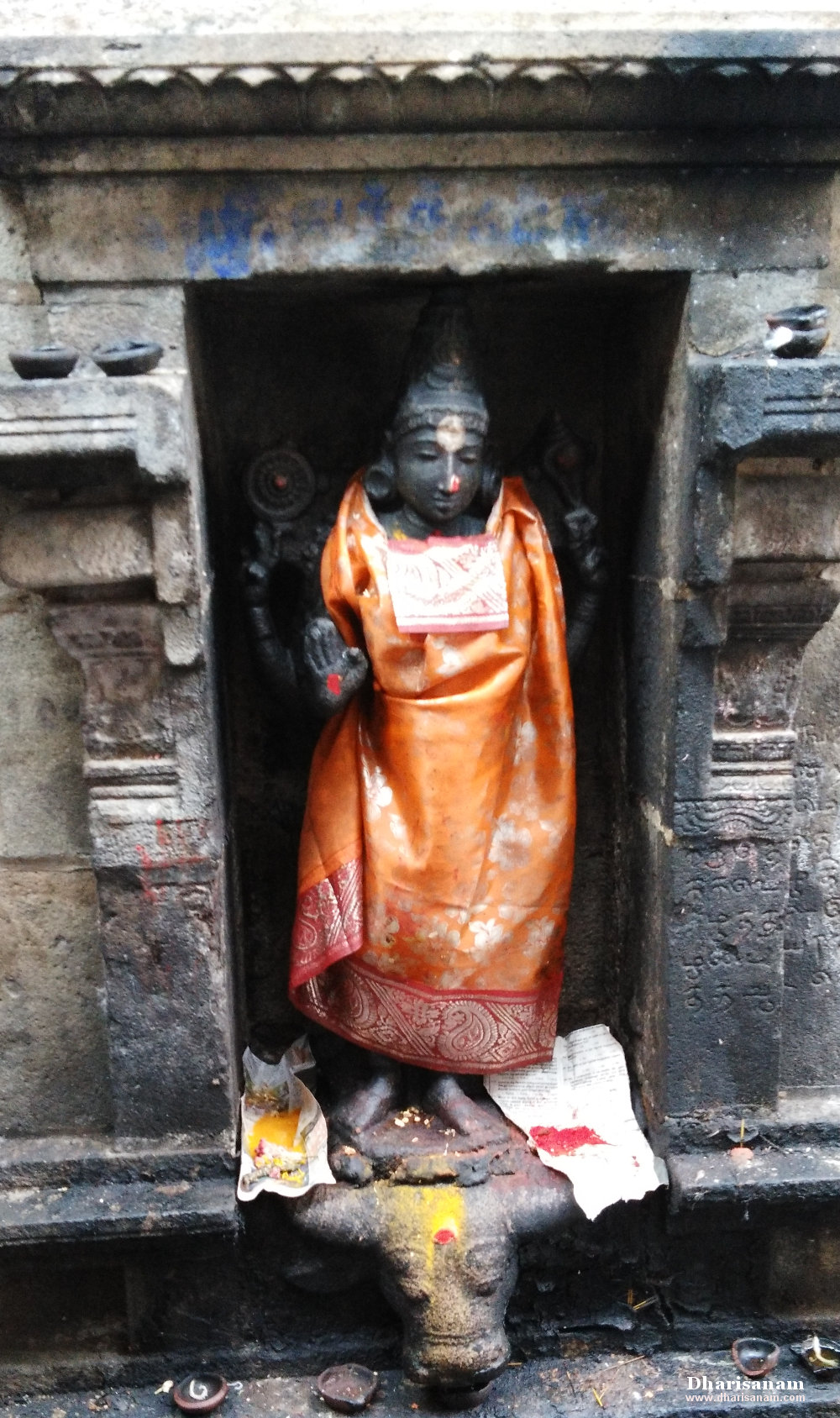 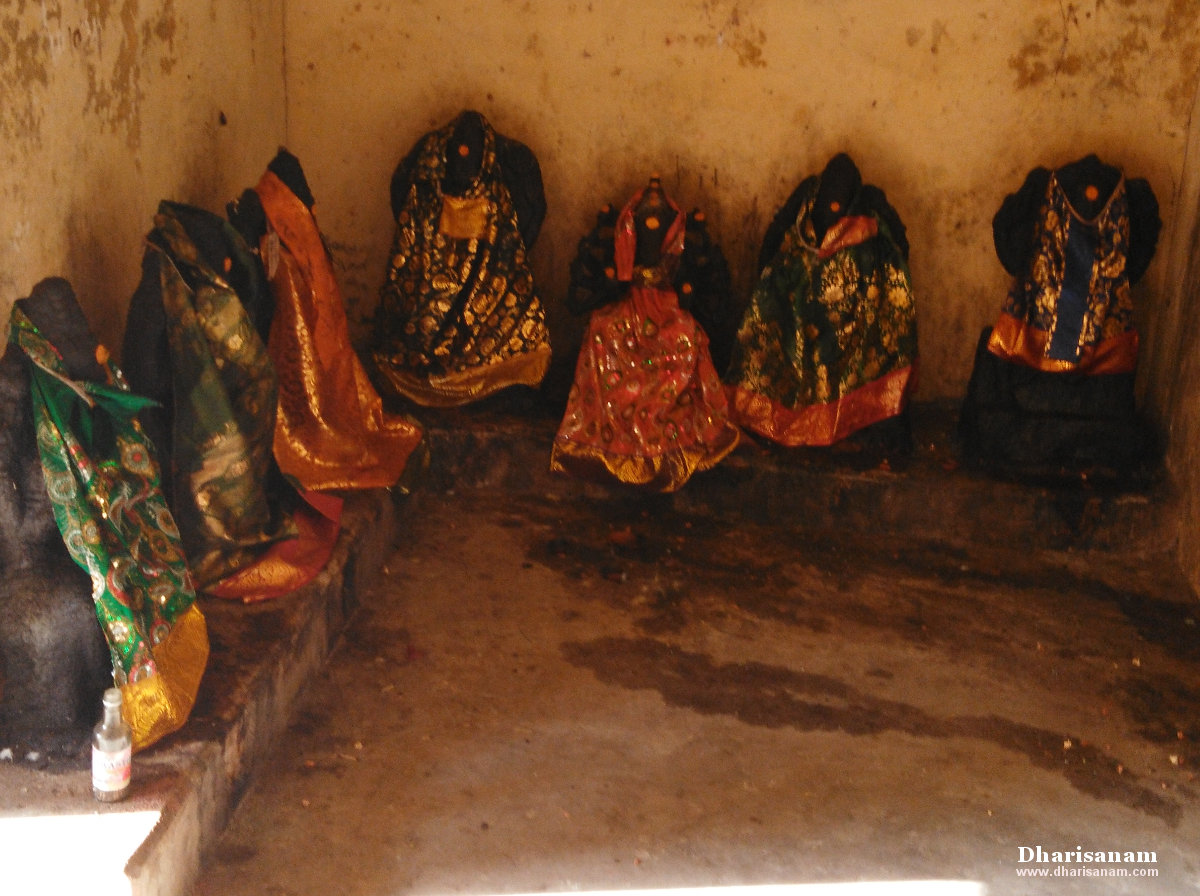 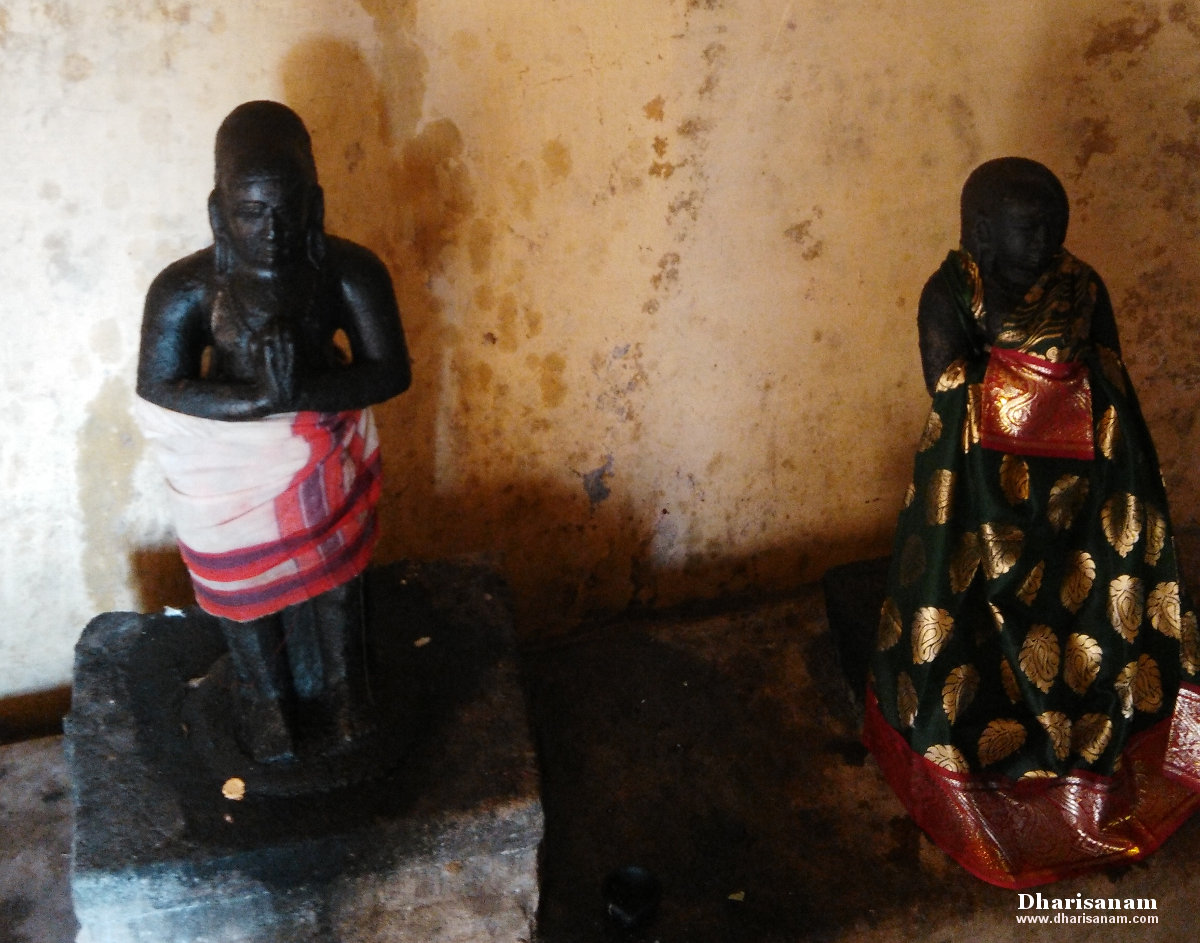 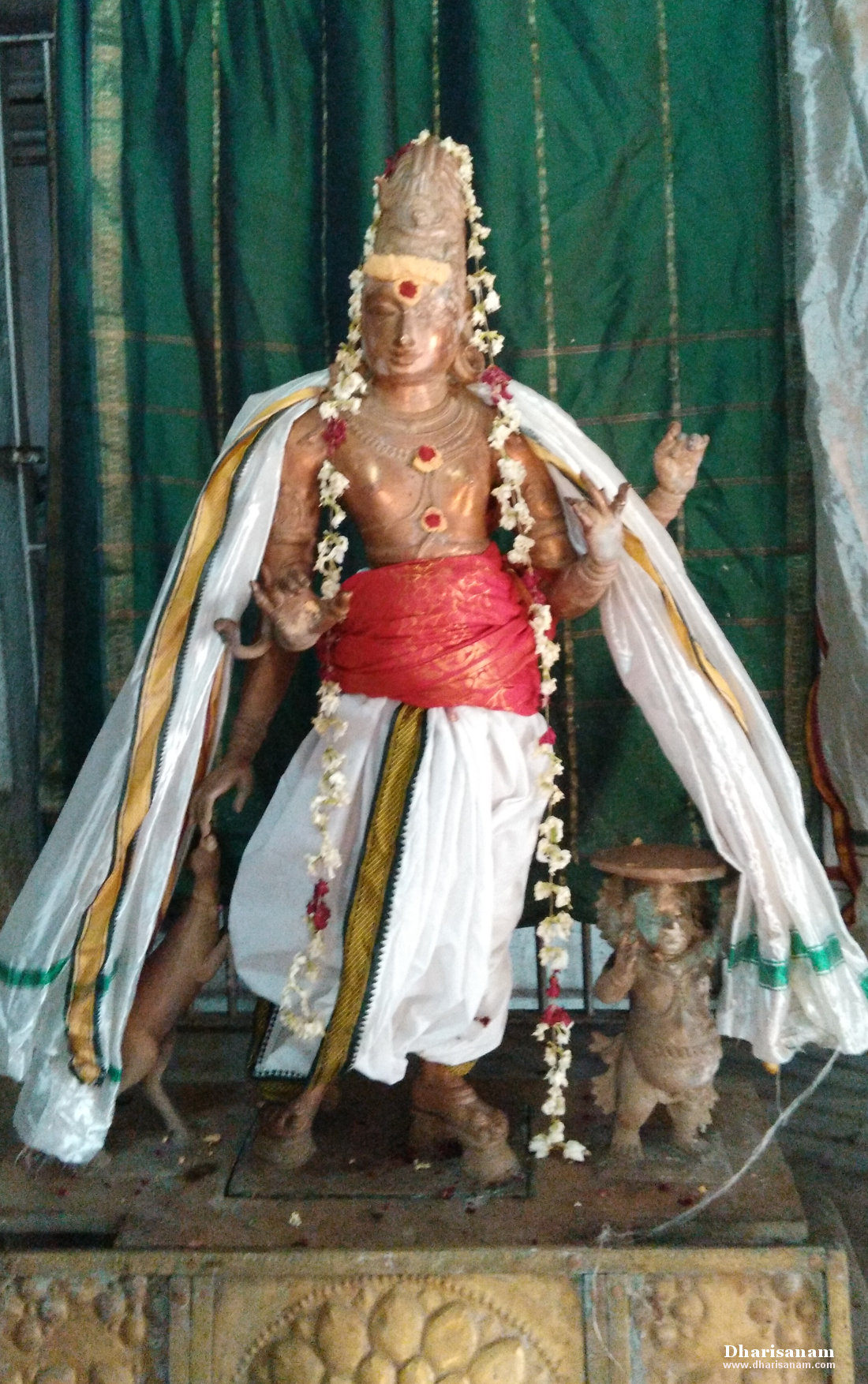 There are two tanks (Theerthams) in front of this temple. There is a shrine for Vinayakar on the banks of one of the tanks.

Vinayakar in this temple is praised as Sri Valampuri Vinayakar, Selva Ganapathy and Vellai Vinayakar.

The sanctum sanctorum is in the form of semi-circular tank (“akazhi” in Tamil).

Those afflicted with skin problems, Stree dosham, or the adverse aspects of serpent planets can pray in this temple for relief.

It is also believed that worshiping the lord here would help devotees break away from the repetitive cycle of birth and re-birth.

Some of the main festivals celebrated in this temple are-

Tiruvadhirai in the Tamil month of Margazhi (Dec-Jan),

Shivrathri in the Tamil month of Masi (Feb-Mar),

Panguni Uthiram in the Tamil month of Panguni (Mar-April) and

Bikshandavar festival on the Bharani star day in the Tamil month of Thai (Jan-Feb).

Pattinathar is another important festival that is celebrated here. 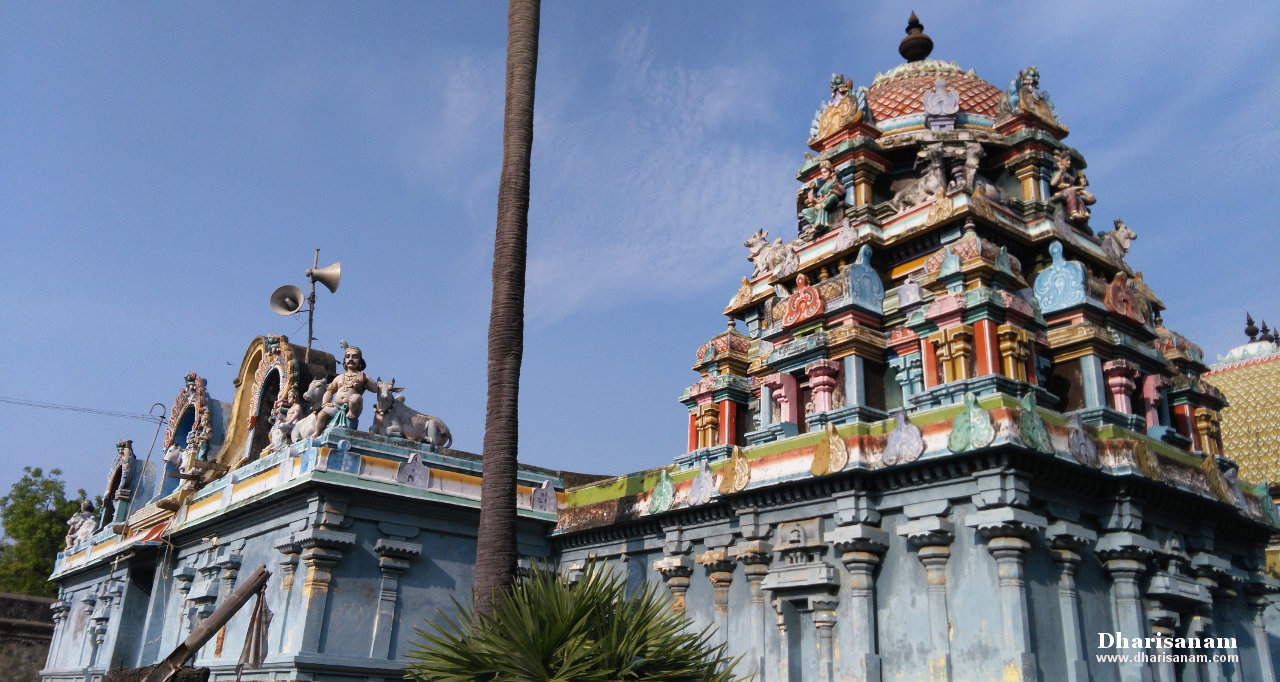 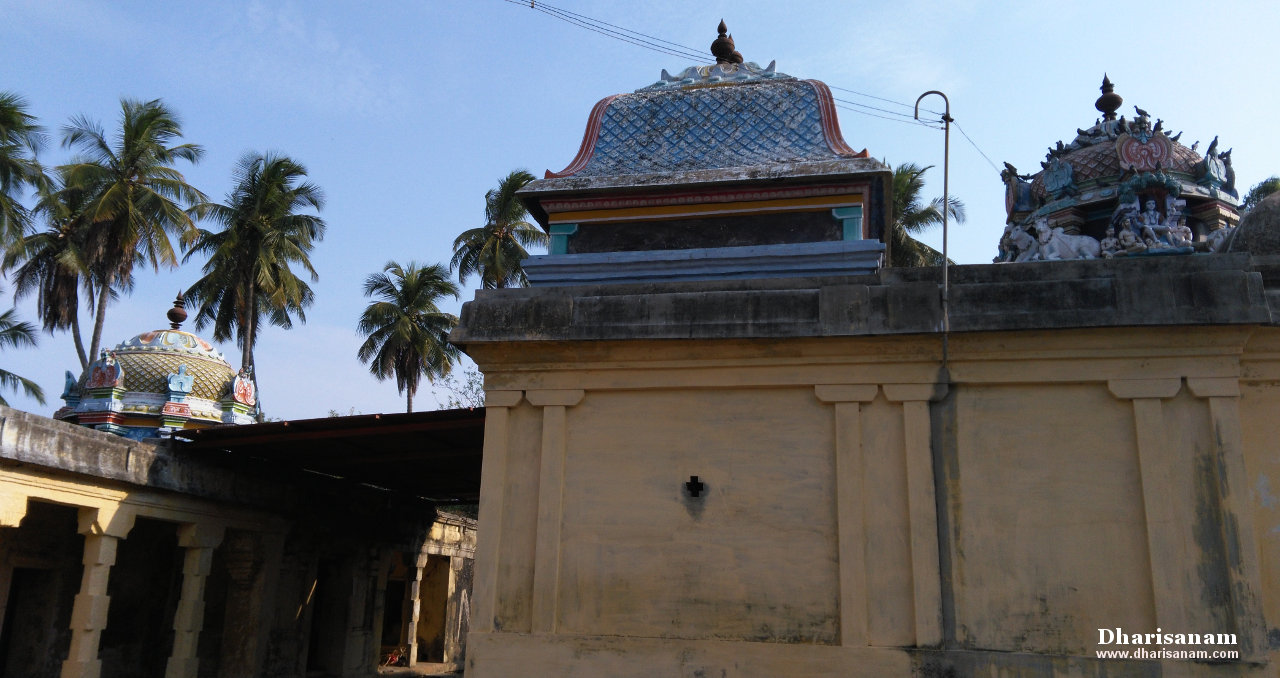 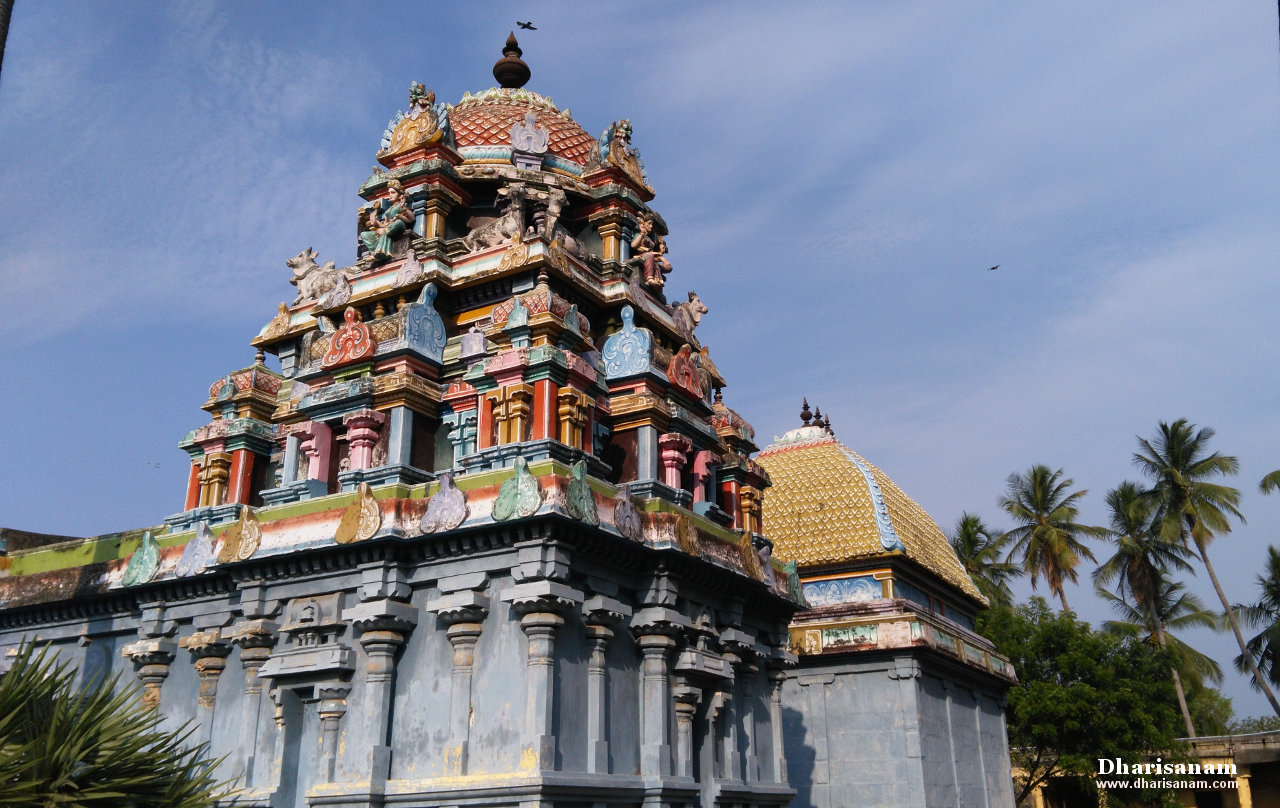