Thiru Vanchiyam (Sri Vanchiyam) is located at a distance of about 30 kms from Kumbakonam on the Kumbakonam - Natchiarkovil - Nannilam route. From Nannilam, it is about 6 kms and from Thiruvarur, it is about 17 kms.

This is one of the six Shivasthalams on the banks of the river Cauvery which are considered to be very sacred and are equivalent to Kasi (Banaras). These are Thiruvengadu, Thiruvaiyaru, Chaayavanam, Mayiladuthurai, Thiruvidaimarudur and Thiruvanchiam (this temple).

It is believed that in each of the four Yugas the idol of Lord Shiva takes a different form. It is considered to be made out of gemstone (Rathinam) in Kretha Yuga, gold in Thretha Yuga, silver in Dvapara Yuga and granite in Kali Yuga.

There are 27 stone inscriptions in this temple which date back to the periods of the later Cholas, Pandiyas and Nayakkars. This temple was originally built by Chola King Rajarajan. 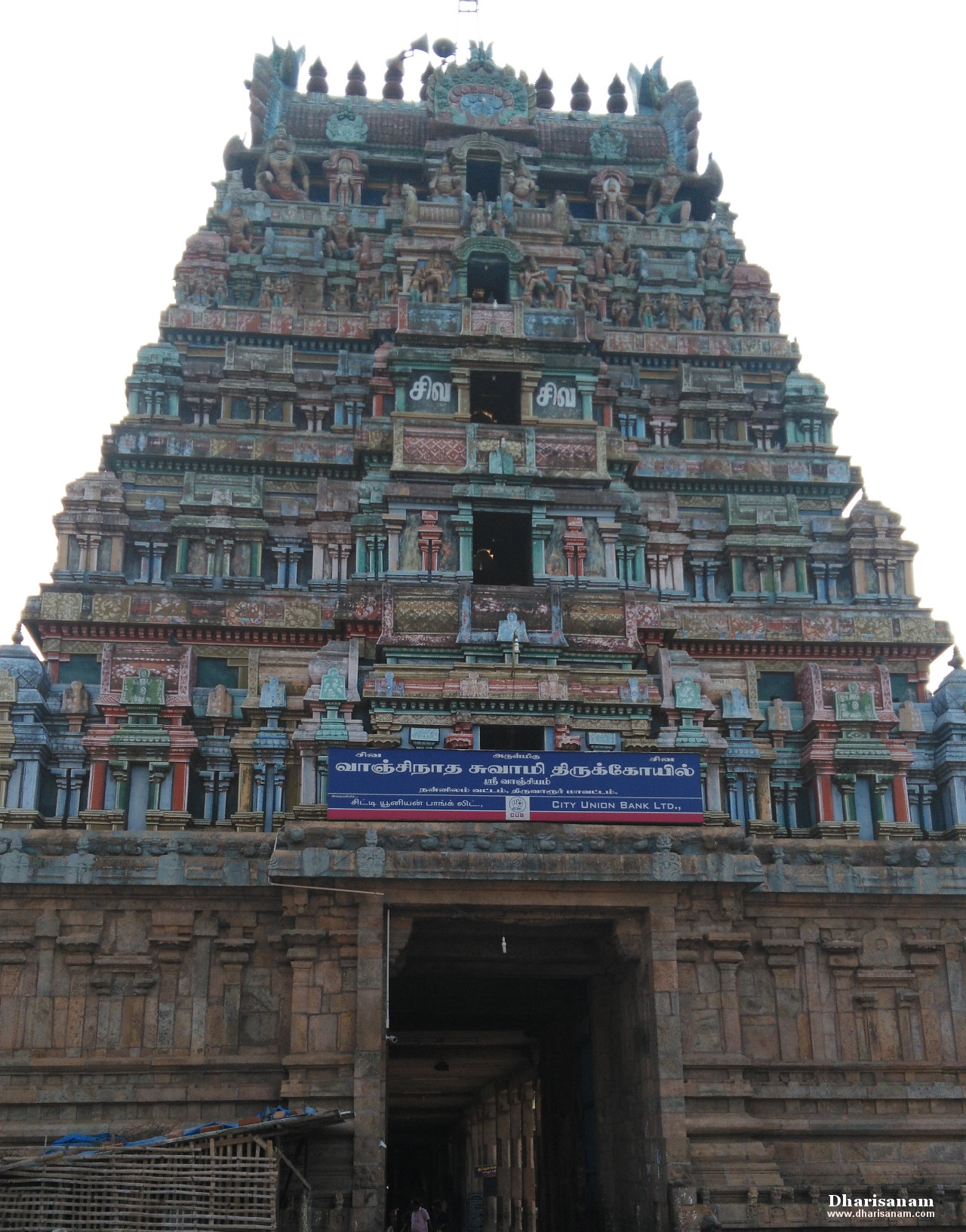 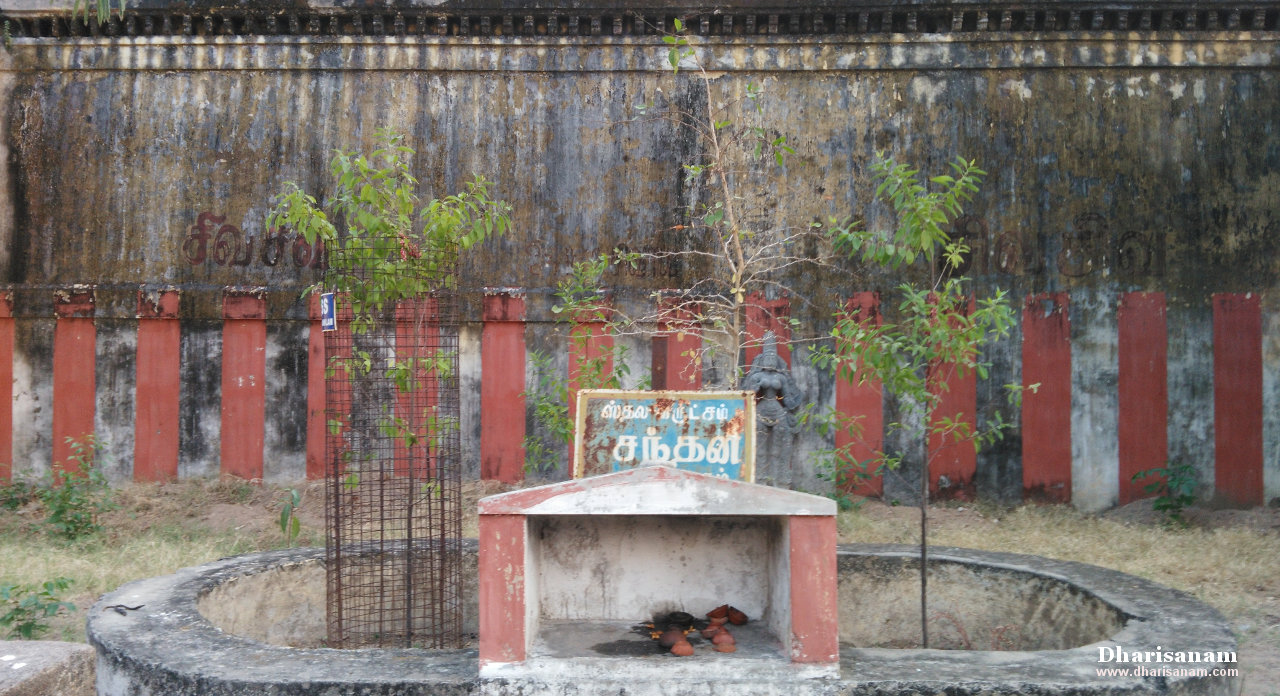 Lord Shiva is believed to have told Goddess Parvathi that he loves this place the most.  She visited this place and decided to stay here. Hence, she is praised here as “Sri Vazhavantha Nayaki” (“vazhavantha” means “the one who came to stay” and “nayaki” means goddess in Tamil).

According to legend, due to some conflict between Goddess Sridevi and Boomadevi, Sridevi left Lord Mahavishnu. He then came to this place and worshipped Lord Shiva here to seek his blessing to be reunited with Goddess Sridevi. It is believed that Lord Shiva blessed him and reunited the couple. Due to the “Vaanchai” (“vaanchi” means affection in Tamil) this place gets the name Sri Vanchiyam.

Another legend associated with this place is that of Yama, the god of death. In Hindu mythology, Yama is believed to be the one who decides the afterlife for human beings based on their good or bad deeds. It is believed that he was once very worried about himself. He was under the impression that because of taking away many lives, he had accrued many sins. He felt that he was destined to go to hell after his death. He sought the advice of Lord Brahma for a solution to this problem. Lord Brahma asked Yama to go to earth and find out a place on the banks of the river Cauvery, where Sandal wood trees were in abundance. He asked him to perform penance there. He further advised Yama that Lord Shiva will take care of him.

Yama found this place (Sri Vanchiyam also known as “Gandhaaranyam”) to be the one that most suited his needs.  He performed his penance here. Pleased with his penance, Lord Shiva blessed him with his dharisanam and told him that he had not done anything wrong while performing his duties. The lord asked Yama to build a temple for him which would also house a separate shrine for Yama. Lord Shiva also granted him the status of the guardian of this temple - “Kshetra Palakar”. The lord further informed that the people who visit this place should first offer prayers to Yama. Lord Shiva advised Yama to bless the devotees who come to worship him here with a long and peaceful life. Devotees would also be able to break free from the continuous cycle of life, death and rebirth. Yama built this temple and stayed here as the mount of Lord Shiva. Since this temple was built in a forest of sandalwood trees, it is called “Gandhaaranyam” (the fragrant forest). 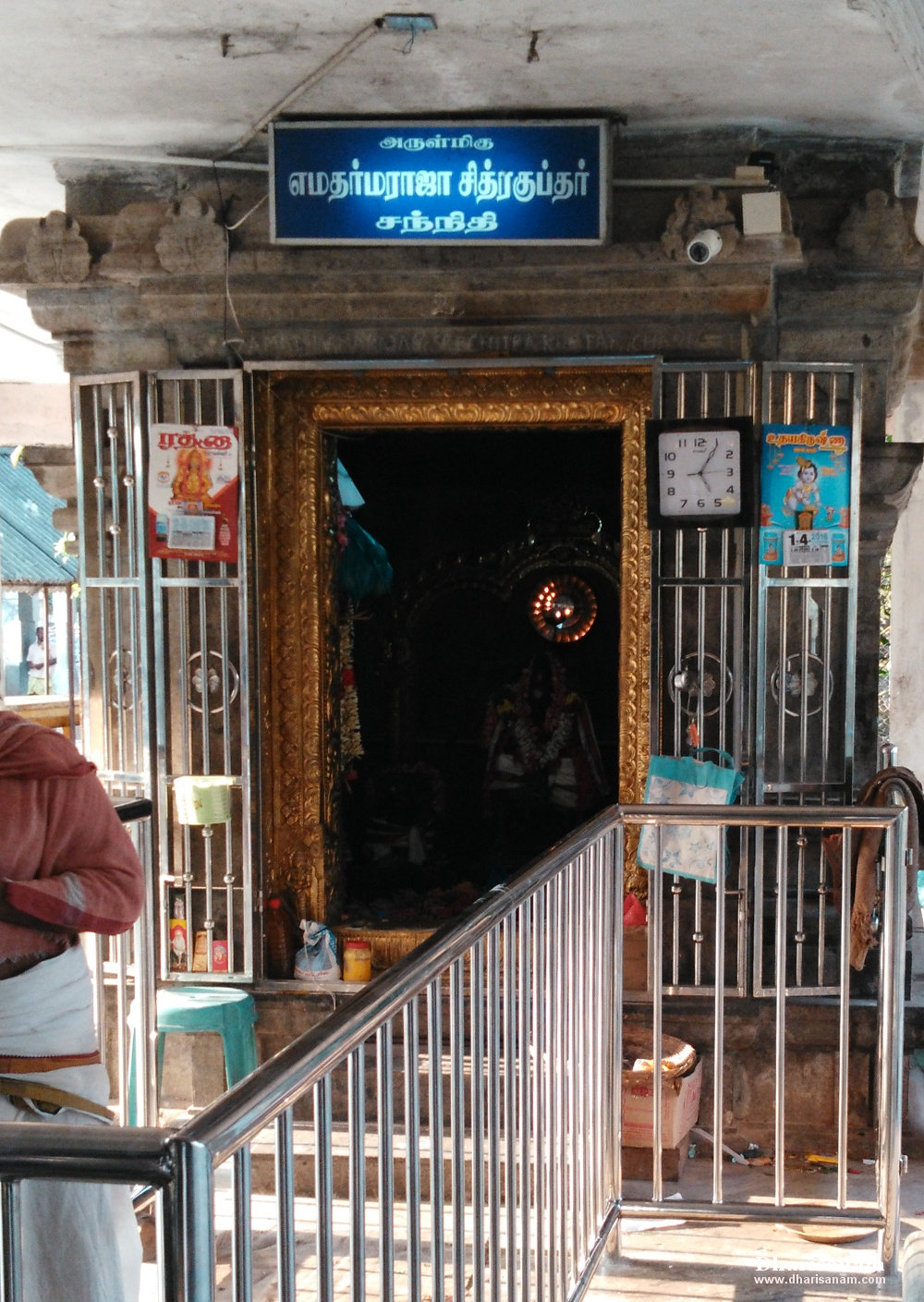 Another legend associated with this temple is that of the river Ganges. She thought that since many people take a dip in her waters to cleanse themselves of their sins, she might have accrued all of those sins. She prayed to Lord Shiva for relief and the lord advised her to come to this place and take a dip in this temple’s tank. He also told her that he had asked Yama to do the same when he had come to him with the same problem. This tank is believed to have been created by Lord Shiva using his trident (“Trisul”). Ganga visited this place, took a dip in the tank and worshiped the lord. It is believed that she still stays in this temple’s tank. Hence this tank is called “Guptaganga”.

Highlighting the significance of this temple, Sage Agasthiyar said that one will get salvation if one just thinks about this temple.

Other than the shrines of Lord Shiva and Goddess Parvathy, shrines and idols of Abhayankara Vinayakar, Murugan with his consorts, Mahalakshmi, Mahishasuramardhini standing beside her “Simha vahanam”, 63 Nayanmars, Kshethra Lingam, Sattanathar and Durgai can be seen in the corridors.

There are Shivalingams in the names of the lord at Thiruvengadu, Chayavanam, Mayiladuthurai, Thiruvidaimaruthur and Thiruvaiyaru. All these places are considered to be as sacred as Kasi.

Also, in the corridors are Theyu Lingam, Akasa Lingam, Dharmambal, Kailasanathar, Mahalakshmi, Chandramouleeswarar, Chandikeswarar and Sundareswarar with Meenakshi. It is surprising to see that Mahalakshmi’s elephant has four tusks.

In the “koshtam” (place surrounding the sanctum sanctorum), idols of Vinayakar, Dakshinamurthy, Lingothbavar, Brahma and Durgai can be seen.

There is no Navagraham here. However, there is a separate shrine for Saneeswarar.

A prominent feature of this temple is that Yama has a separate shrine. Devotees are advised to worship Yama first and then Lord Shiva. Chitragupta, the accountant of Yama, can also be seen in this shrine along with Yama.

There is a separate shrine for Lord Bhairavar in the inner corridor. He can be seen here sitting in a yogic posture. His mount (dog) is not seen along with him. This is a unique feature of this idol.

Next to the shrine of Bhairavar is the shrine for Rahu-Kethu, both carved from a single stone. This is another unique aspect of this temple. 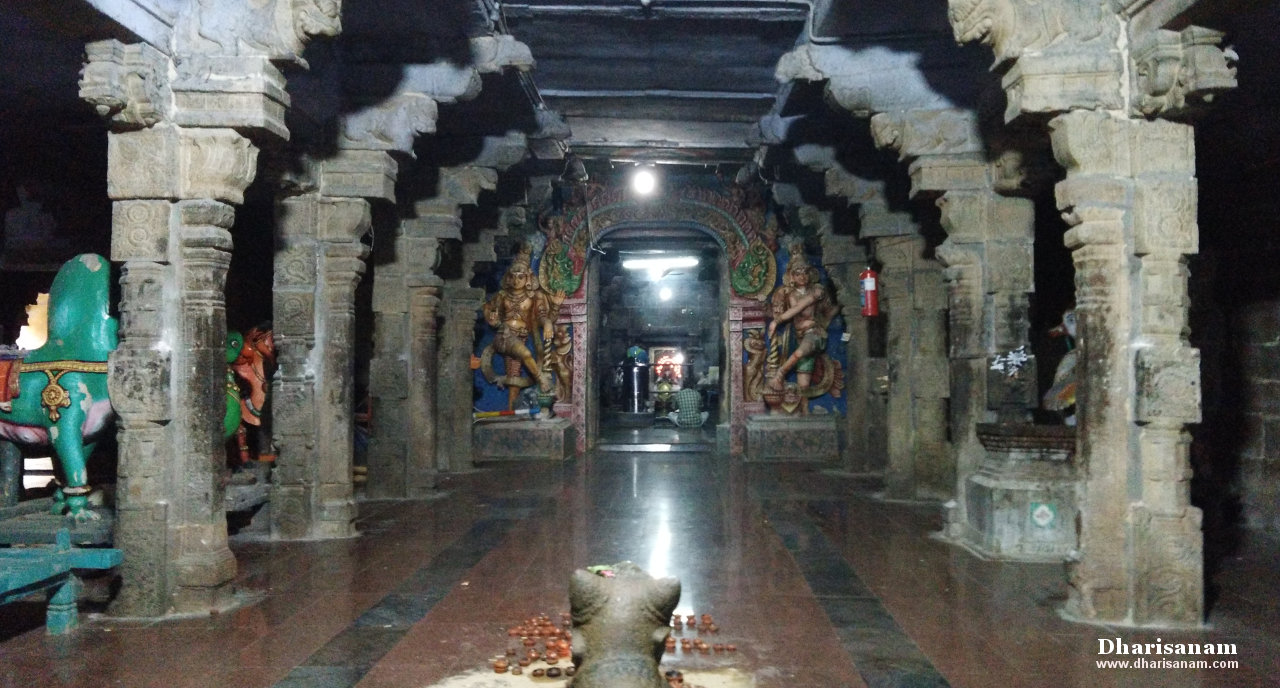 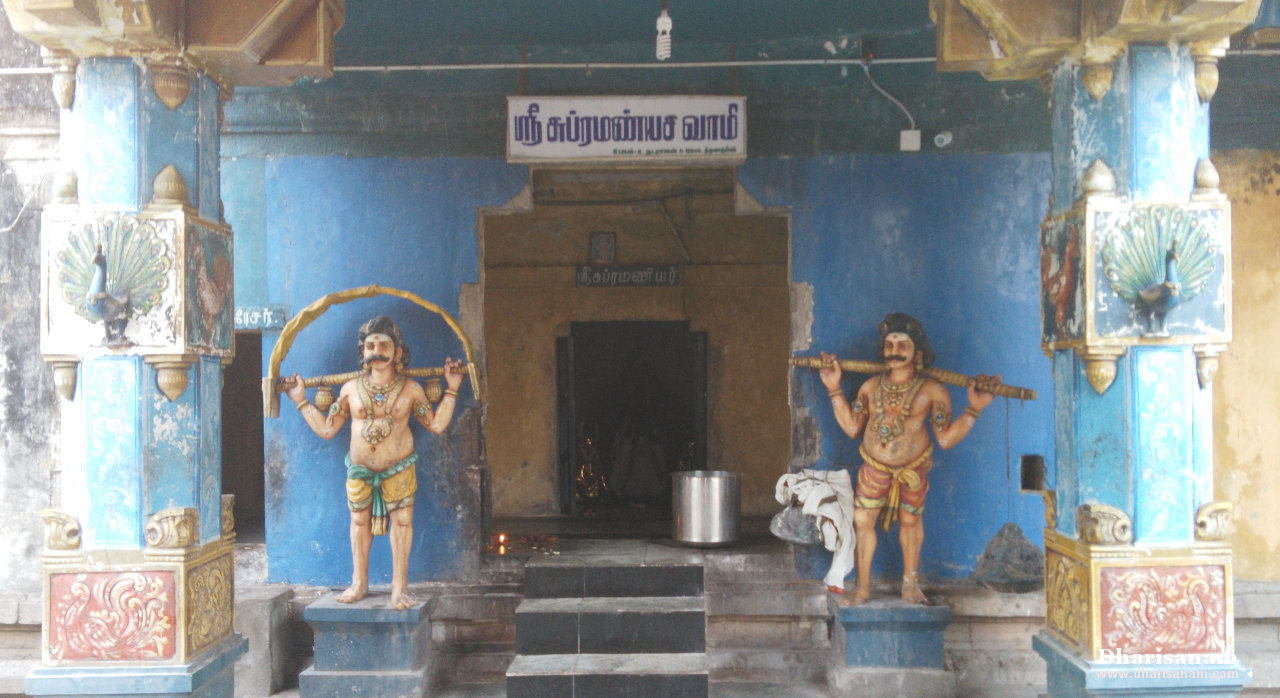 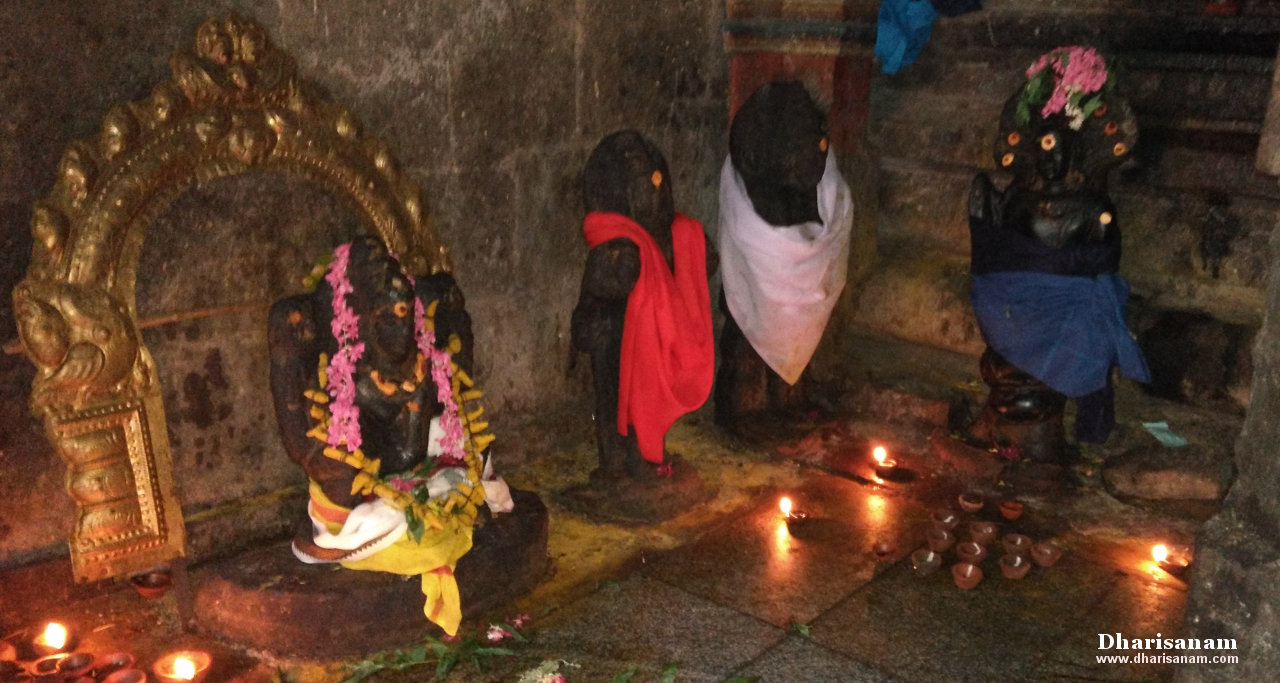 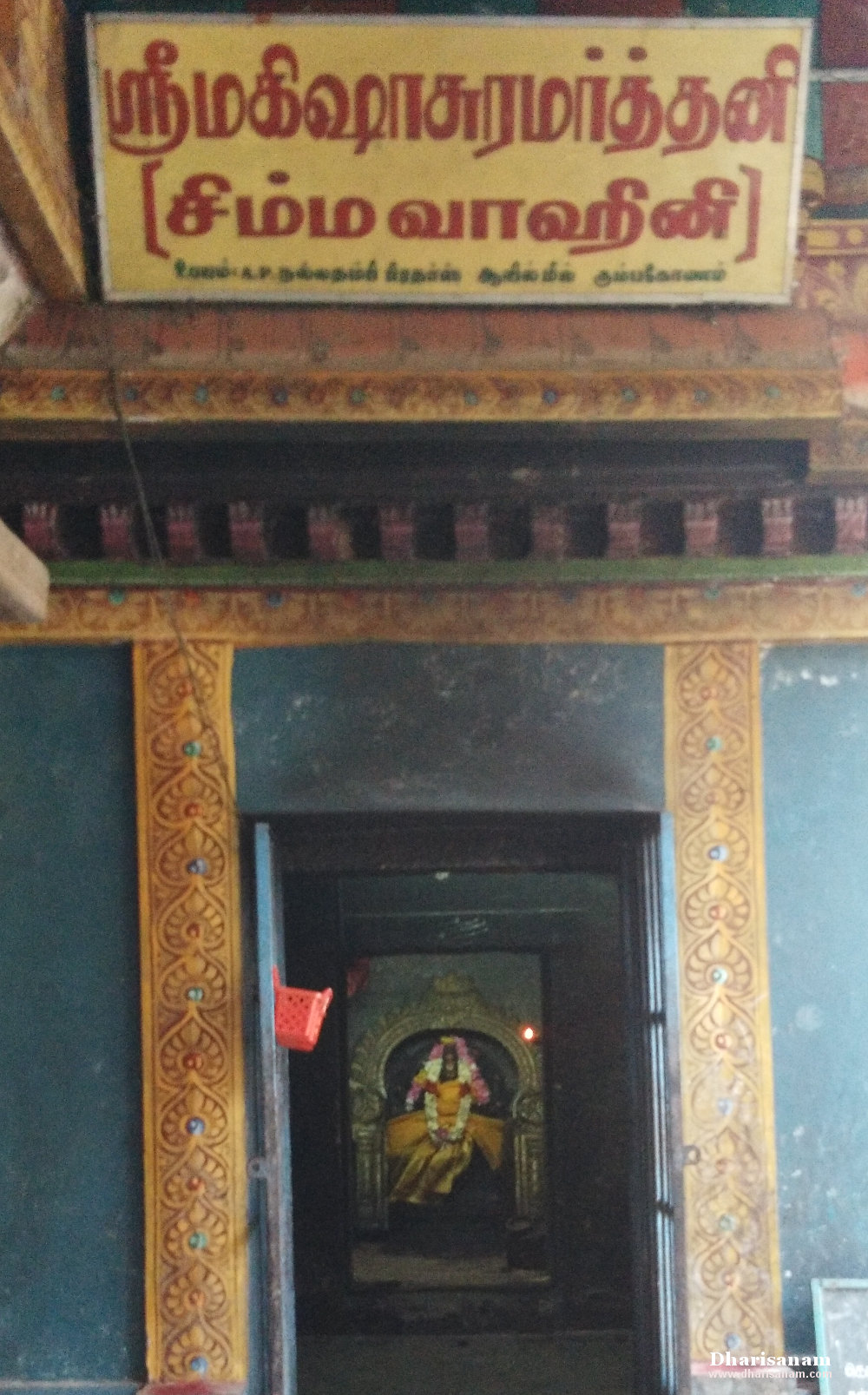 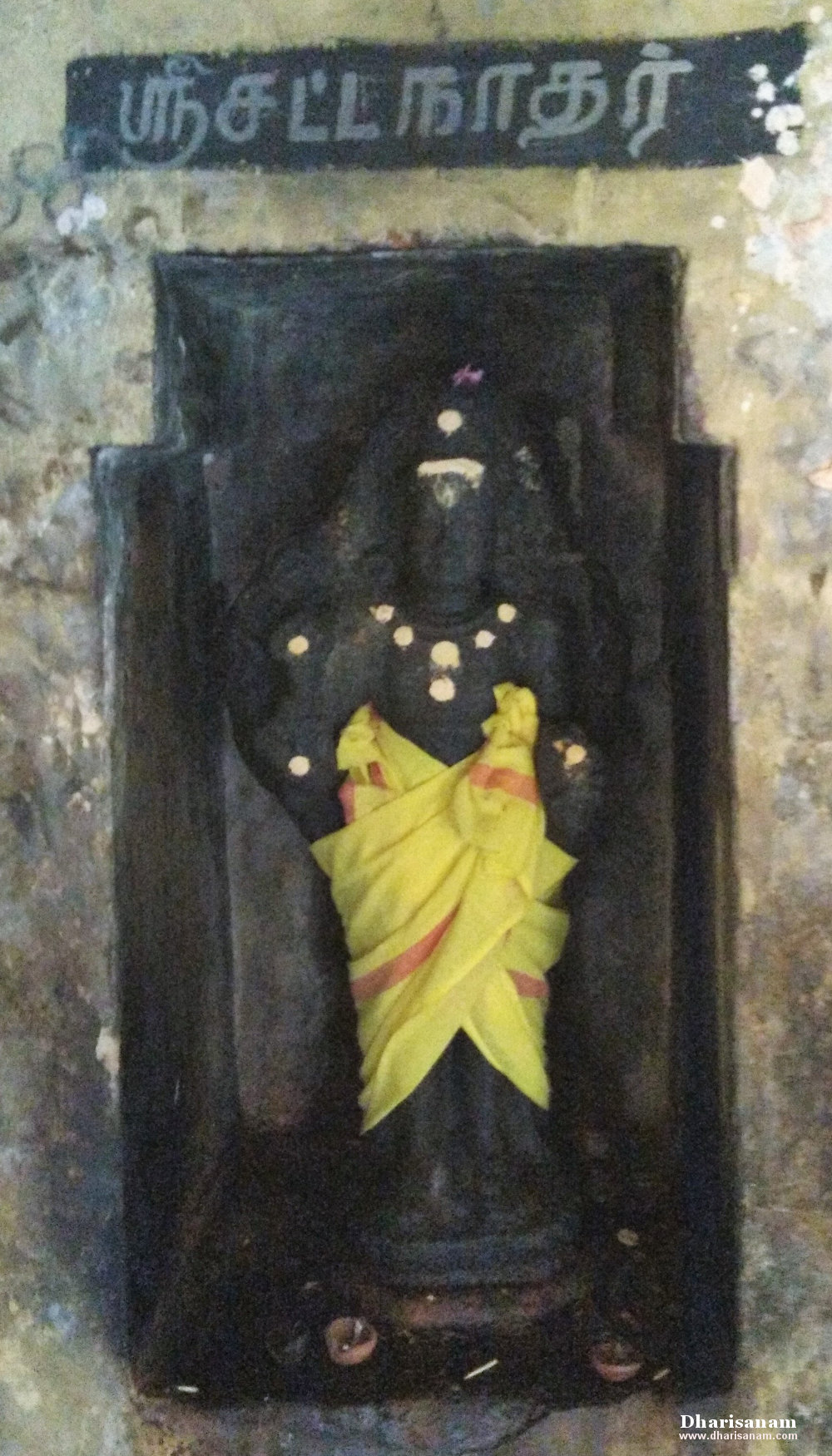 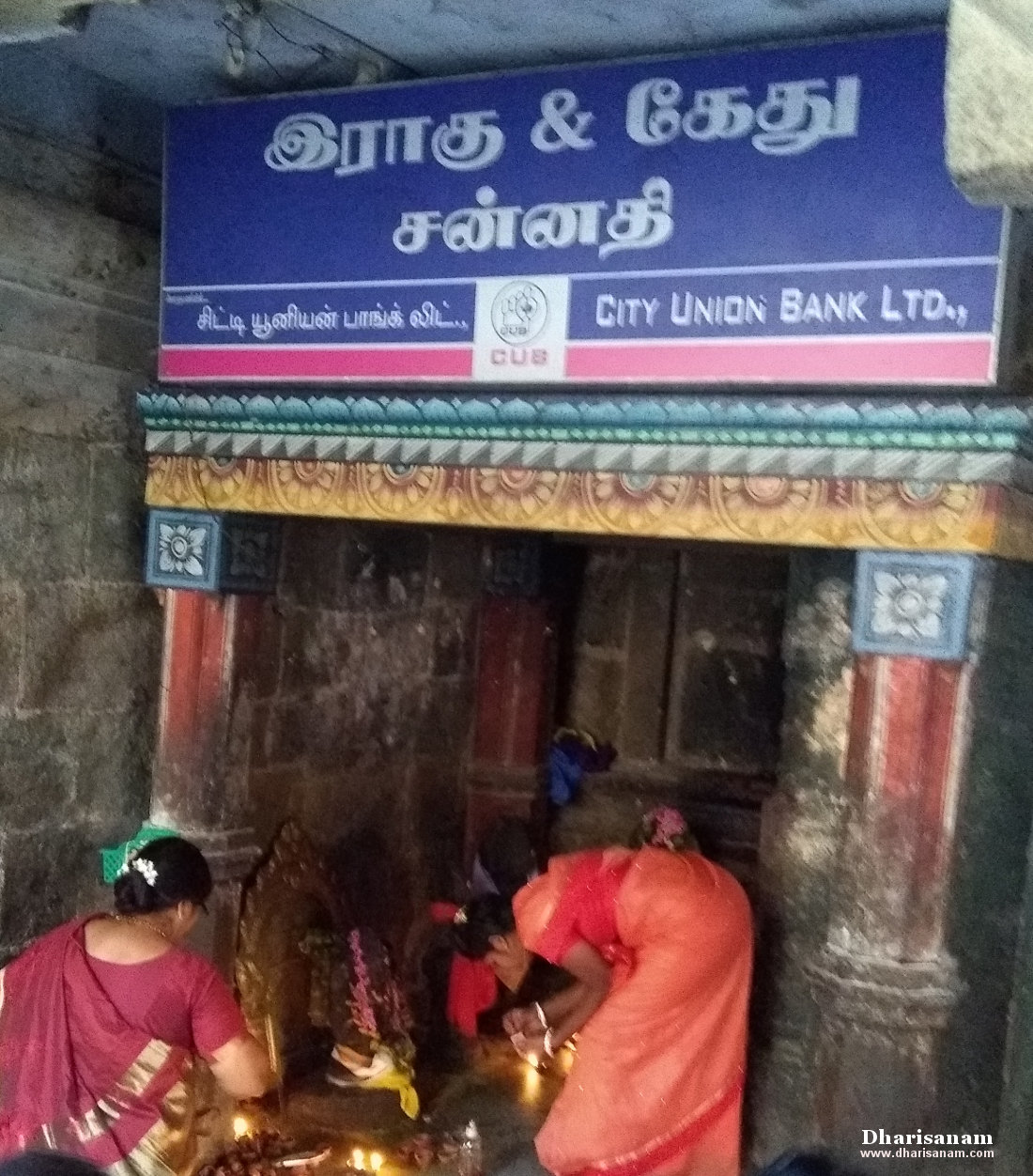 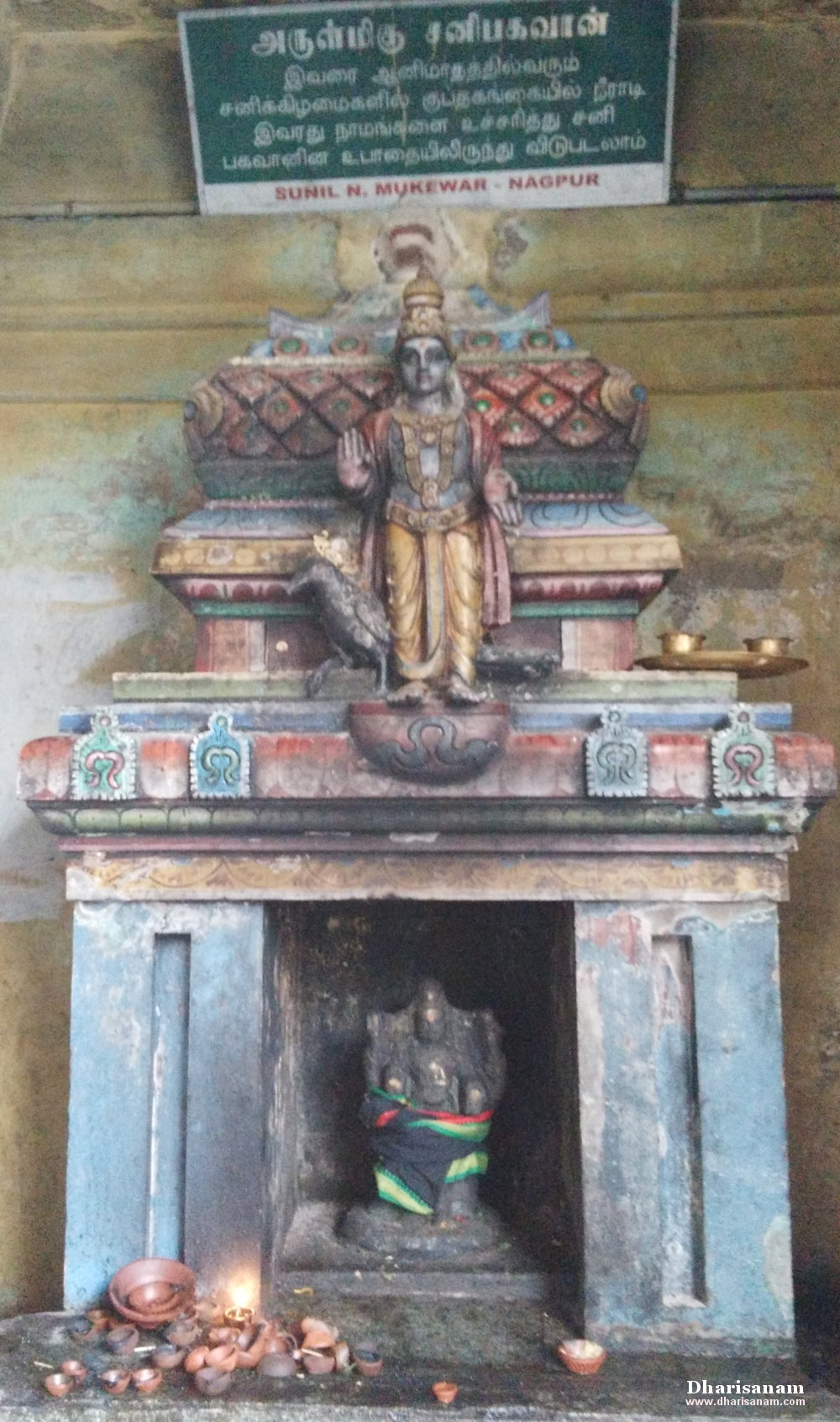 In this temple, poojas are performed first to Yama and then to the other gods.

The procedure to worship in this temple is that one has to first take a dip in the Guptaganga, then worship Lord Vinayakar on the banks of this tank, then go to Yama’s shrine for worship and finally go to Lord Shiva’s shrine.

There is a “Yama Vahanam” (mount) in this temple over which the procession idol of Lord Shiva is taken during festivals.

Devotees believe that by worshiping Goddess Mahishasuramardhini here with 108 lotus flowers, they will be relieved from all kinds of “doshas”.

The Sthala Viruksham of this temple is Sandalwood tree. Here, Sandalwood leaves are used for pooja in place of Vilvam leaves.

It is believed that by reciting Saint Thirugnanasambanthar’s hymn, estranged couples will be reunited.

Guptaganga Theertham is on the northern side of the outer corridor. According to the Sthala Puranam, a holy dip in this tank is equivalent to taking a dip in Varanasi, Rameswaram and the “Maha Maham tank” in Kumbakonam. Lord Vinayakar on the banks of the Guptaganga is to be worshiped after taking the holy dip.

It is believed that taking a dip in this Theertham would help devotees get salvation and will help them break away from the repetitive cycle of birth and re-birth.

In the first corridor, there is a relief depicting Lord Vinayakar.  He is praised as “Vennai (butter) Pillaiyar”. People suffering from stomach ailments smear some butter on this Pillaiyar’s stomach with the hope that they will be cured.

This temple is also open during the time of eclipse and special poojas are performed.

The sanctum sanctorum is in the form of semi-circular tank (“akazhi” in Tamil).

One must visit this temple to experience the grandeur and architectural beauty of the Chola and Nayakkar periods.

This is a famous parihara sthalam for those afflicted with Rahu or Kethu dosham. By worshiping Rahu and Kethu here devotees are blessed with marriage boon, progeny and cure from nervous disorders.

It is believed that devotees will be relieved from the fear of death if they worship Lord Yama here.

Other festivals celebrated here are -

Vinayakar Chaturthi and Aavani Moolam in the Tamil month of Aavani (Aug-Sept),

Theerthavari at Guptagangai on all Sundays in the Tamil month of Karthikai (Nov-Dec), 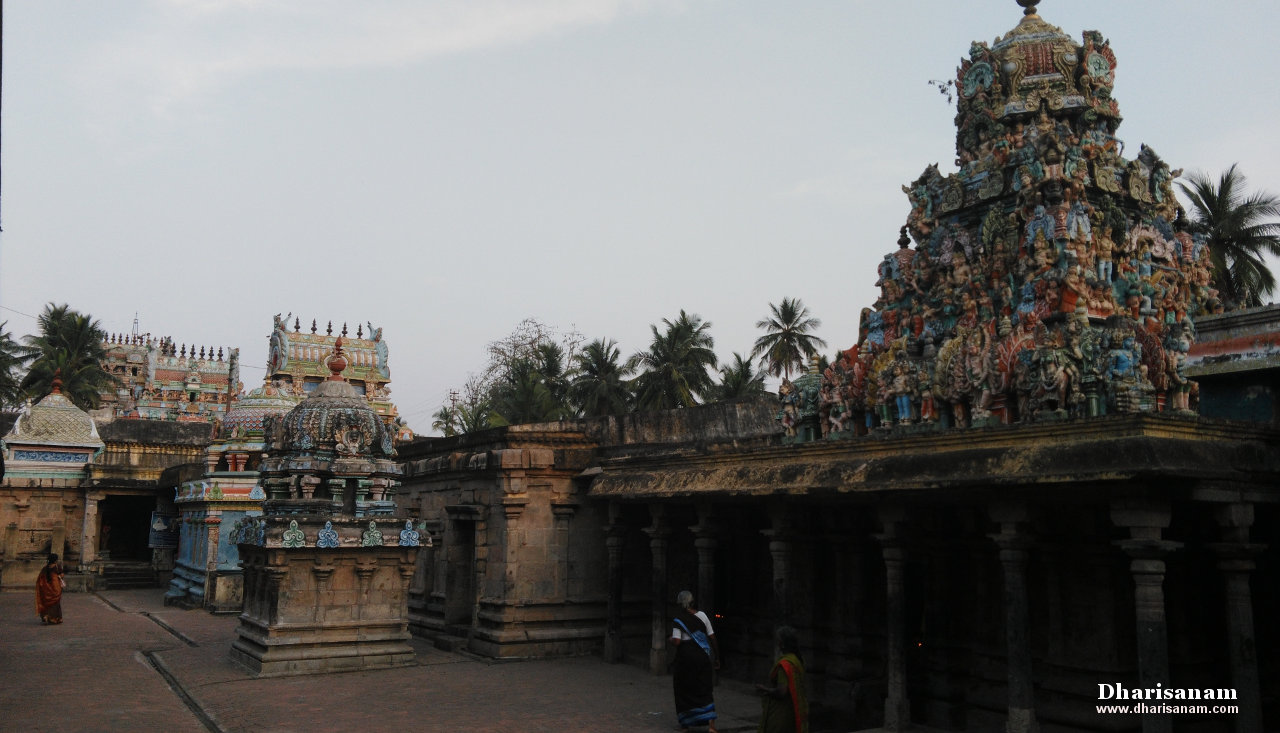 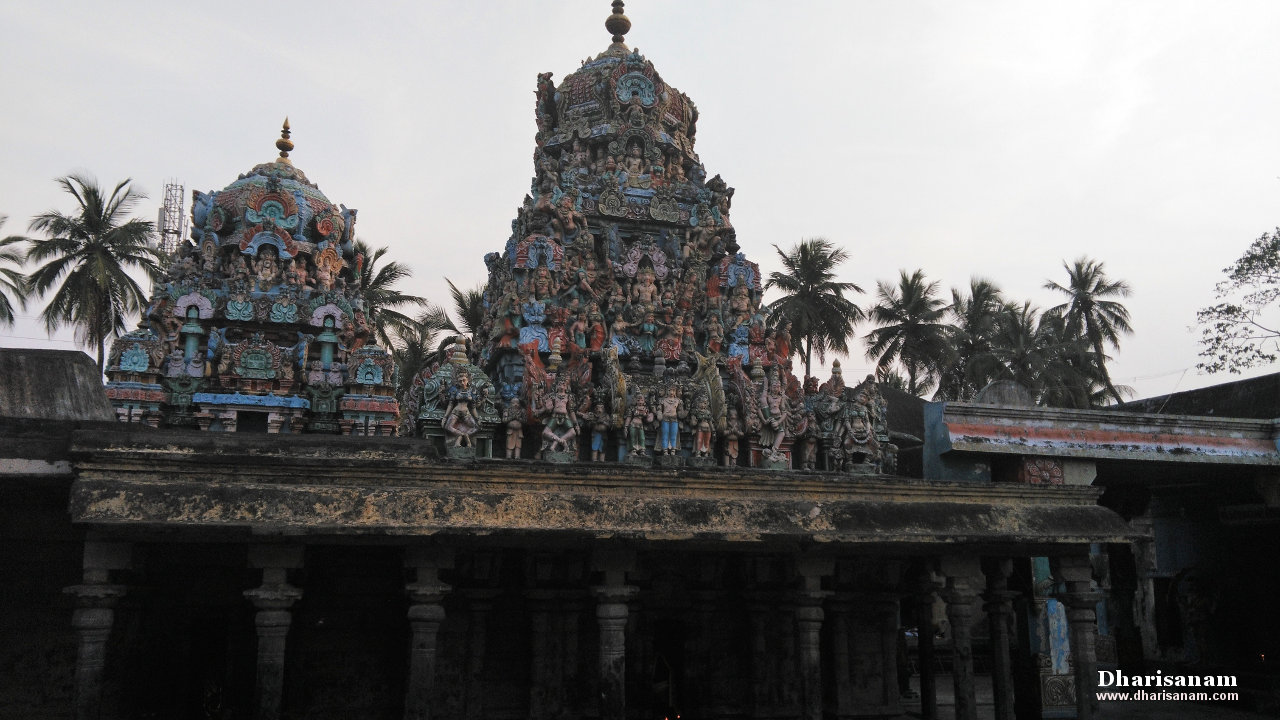 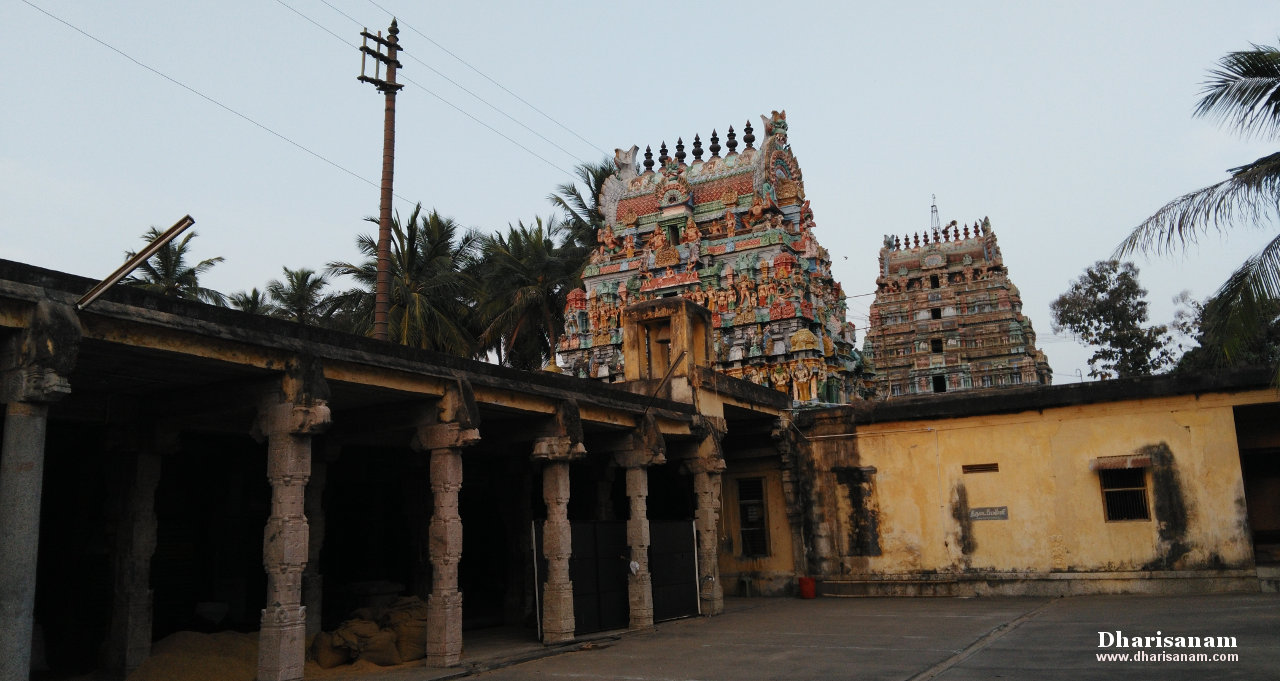 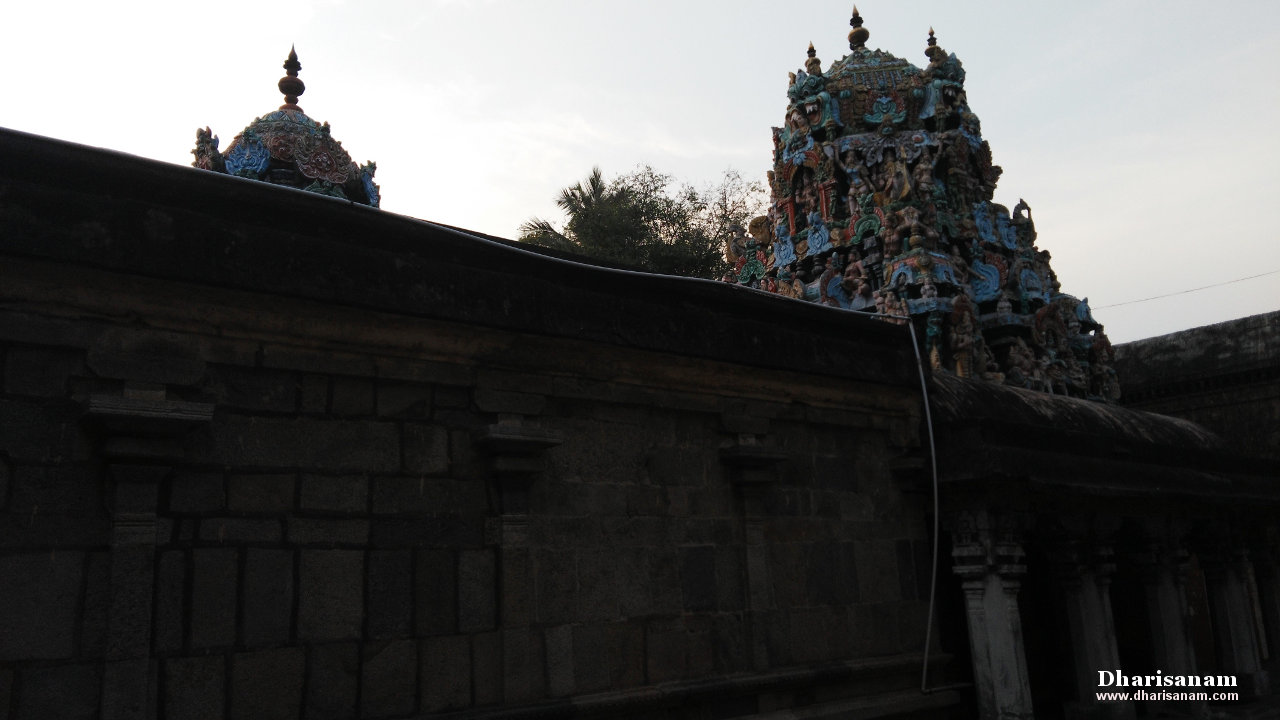