There are 28 stone inscriptions available in this temple which relate to the period of Chola dynasty. The temple was renovated by Queen Sembian Mahadevi, wife of Chola King Kandaradithan. 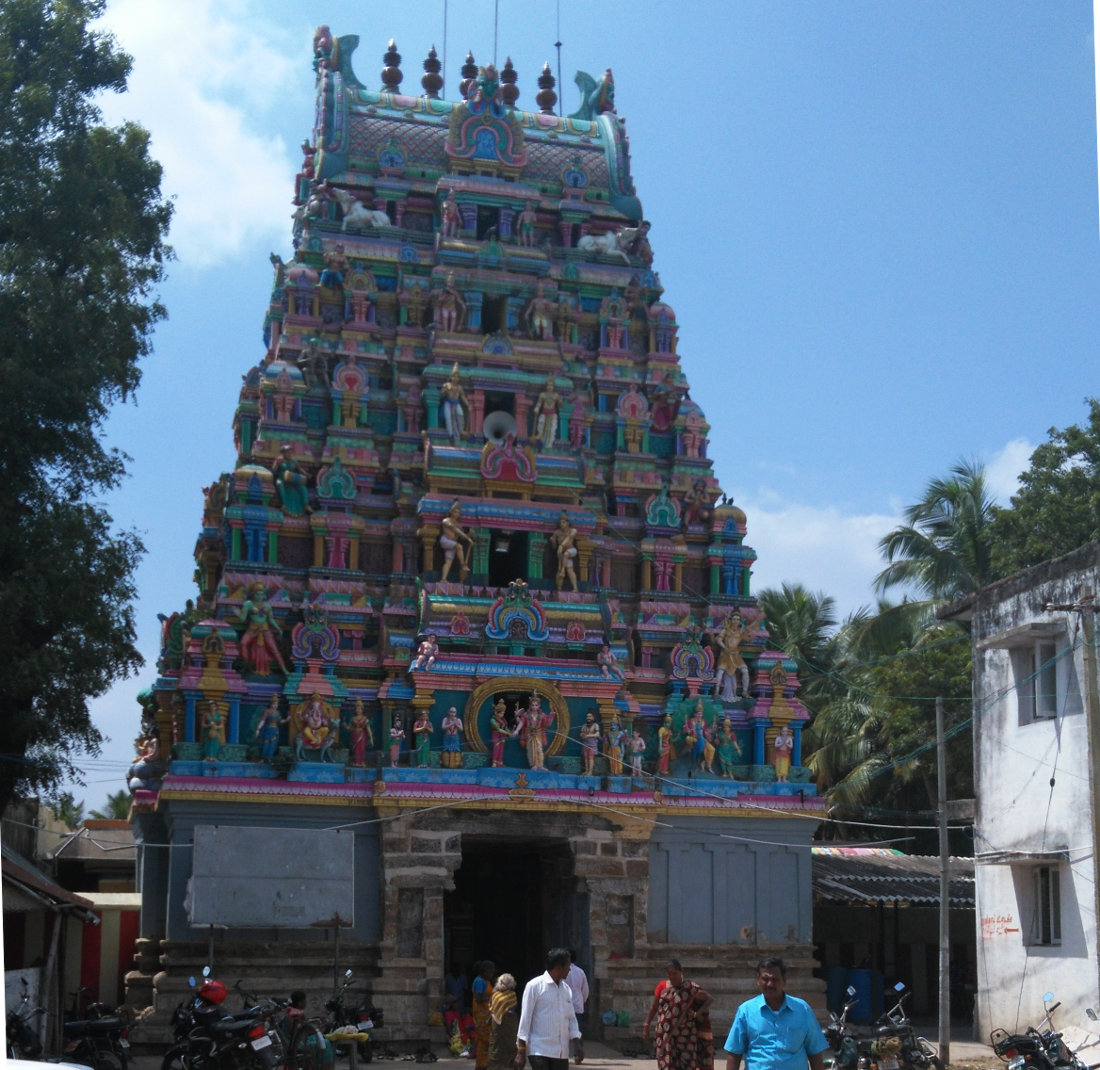 Thirumanancheri enjoys a special place in mythology because it is linked to the legends of a few nearby Paadal Petra Shiva Sthalams.

It is believed that once Goddess Parvathi was cursed to be born on earth. She is believed to have appeared from the fire of Sage Bharatha’s “Kameshti yagna”.

Sage Bharatha raised her as his own daughter. Goddess Parvathy performed rigorous penance for 16 consecutive Mondays to seek relief from the curse and to be taken back to the abode of Lord Shiva.

When she grew up and attained the marriageable age, the sage prayed to Lord Shiva that he help him find a suitable groom for her. Responding to his prayers, Lord Shiva appeared before him and told him that he would marry his daughter soon. The lord further told the sage that his daughter was none other than Goddess Parvathy herself. He also explained him that the reason for her appearance on earth was to grant her the wish of being married on earth.

It is believed that this is the place where Lord Shiva and Goddess Parvathi came after their wedding at Thiruvelvikudi. It is further believed that they stayed back here as a married couple. Hence this place gets the name “Thirumanancheri” (“Thirumanam” means wedding and “Cherri” means village in Tamil) and the name of the Lord is “Sri Kalyanasundareswarar” (“Kalyanam” also means wedding in Tamil).

As per the “Sthala Puranam” the “seven seas” (“Sapta Saharam”) came to this place and offered themselves as garlands for Lord Shiva and Goddess Parvathy. They also stayed back here to form the temple’s holy tank. This tank is in the form of a semicircle (“Akazhi” in Tamil) around the temple and is known as “Sapta Sahara Theertham”.

Another legend associated with this temple is that of the cupid Manmathan. It is believed that once Manmathan disturbed Lord Shiva when he was meditating.  Angered by this distraction, Lord Shiva opened his third eye and burnt Manmathan by unleashing a torrent of fire. This incident happened at a nearby place called Thiru Kurukkai (another Devara Paadal Petra Sthalam). Rathi Devi, Manmathan’s wife, pleaded to Lord Shiva to pardon him. Manmathan was restored back to life and united with Rathi Devi by the grace of the lord of this temple.

Apart from the shrines of Lord Shiva and Goddess Parvathy, shrines and idols of Selva Ganapathy, Murugan with his consorts, Natarajar, Dakshinamurthy, Brahma, Vishnu, Raghu (Aadhiseshan), Durgai, Suryan, Bairavar, Saneeswarar, Nalvar, and Mahavishnu with Sreedevi and Poodevi, Bharatha Maharishi, Queen Sembian Madevi can be seen in the corridors. There is no Navagraham here.

Also, the idols of Pachaiyappa Nathar, Pachai Ammai and Mallappa Naicker can be seen in the corridors. These are the people who have contributed to the reconstruction and renovation of this temple. 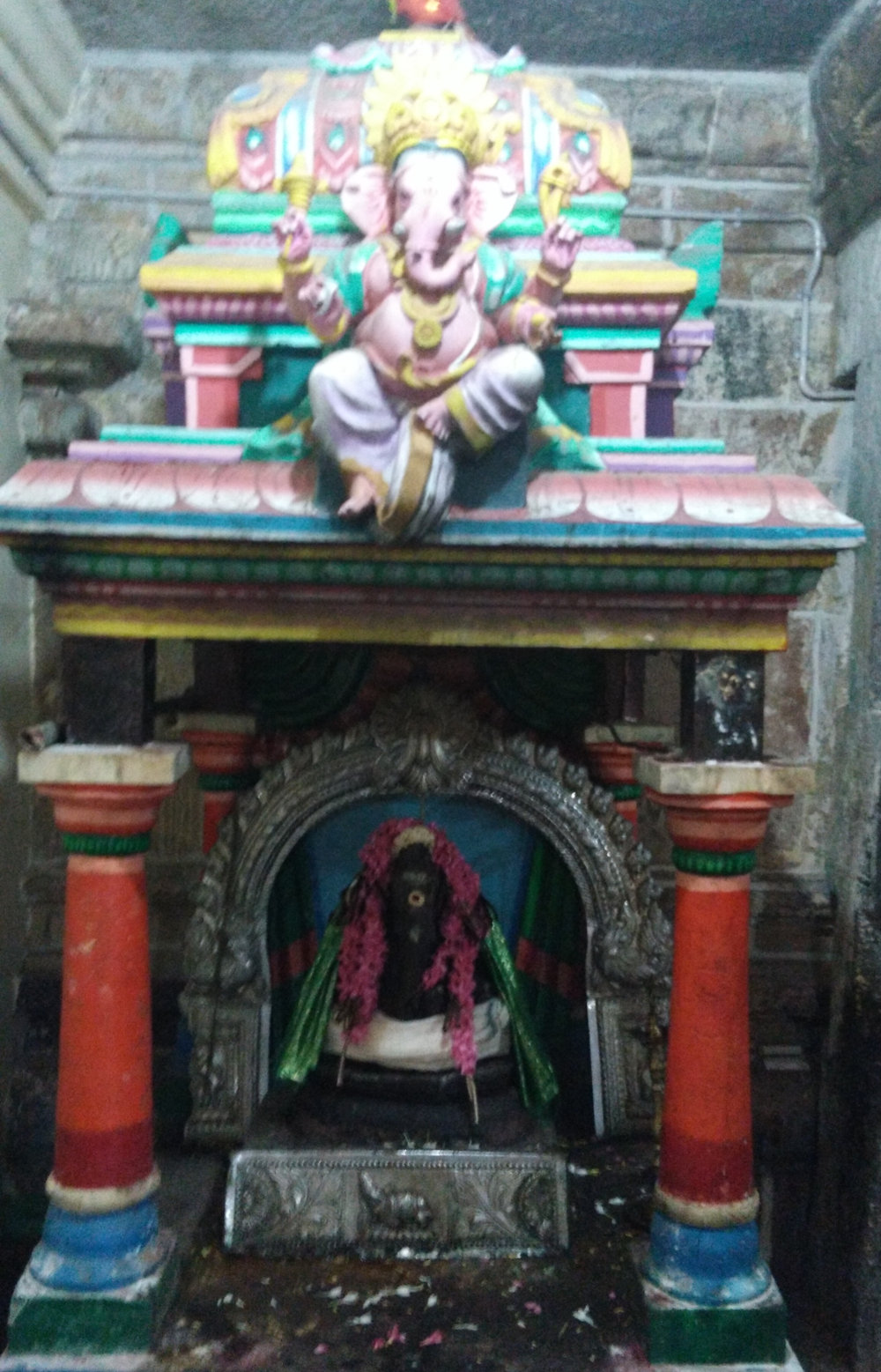 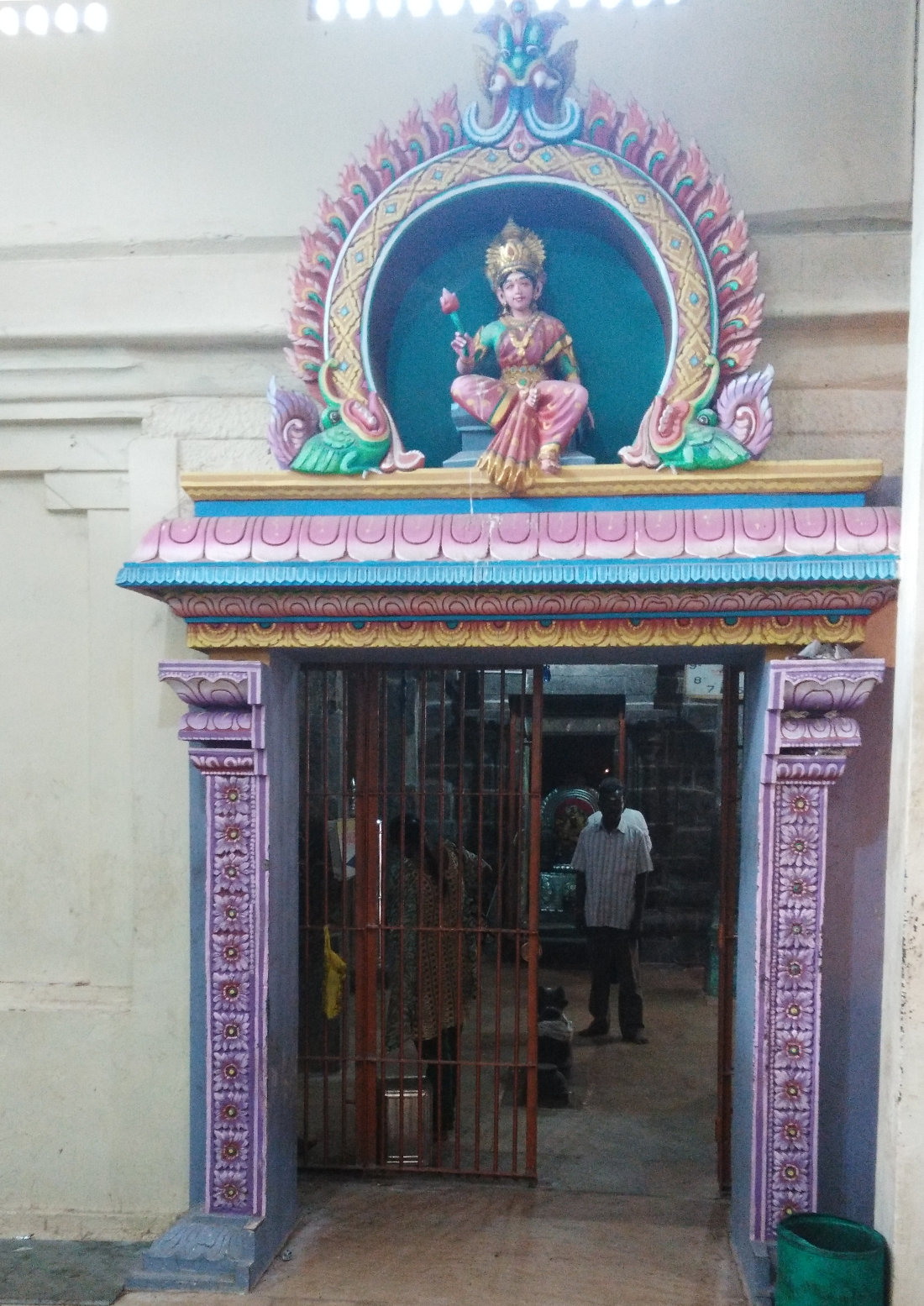 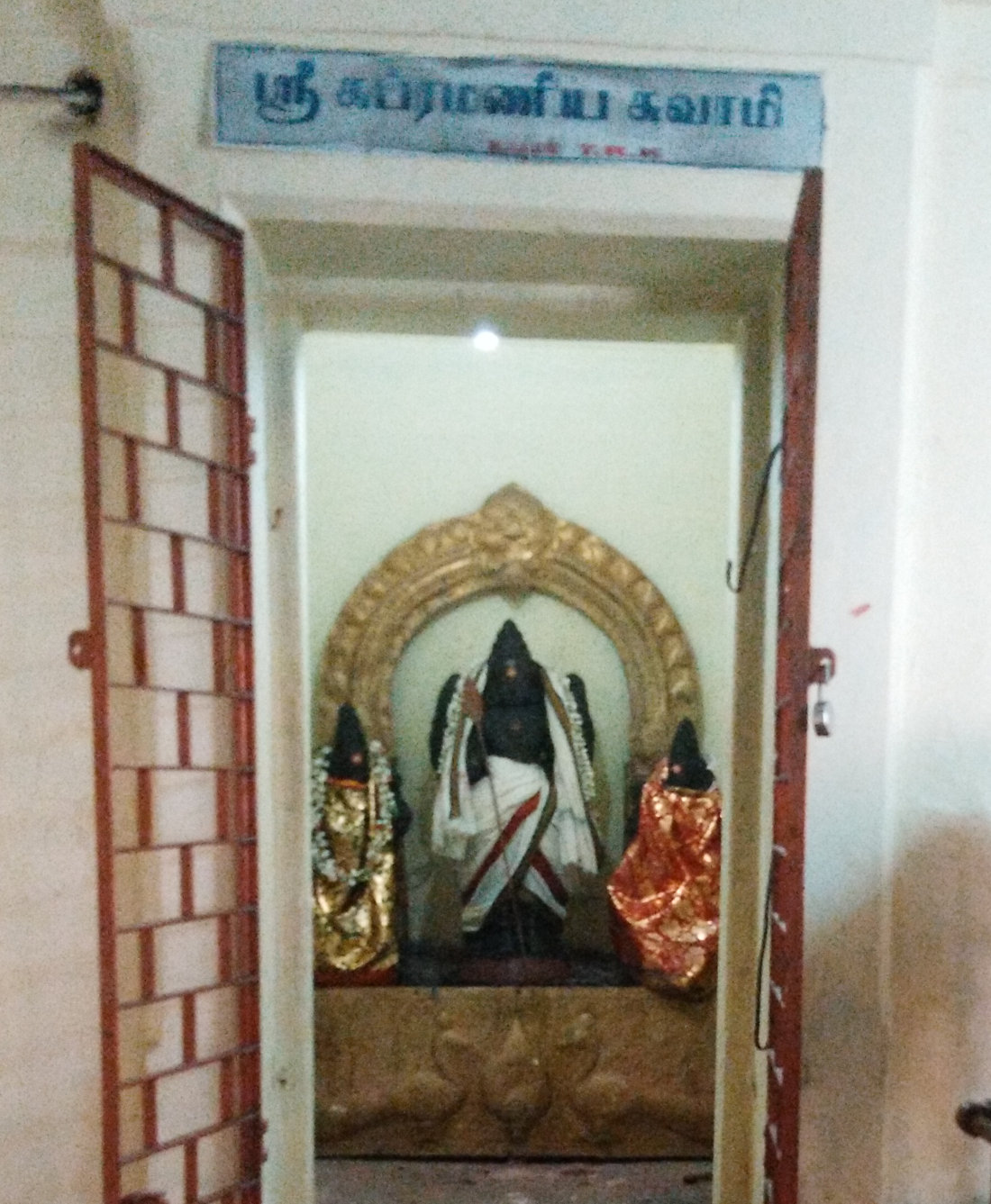 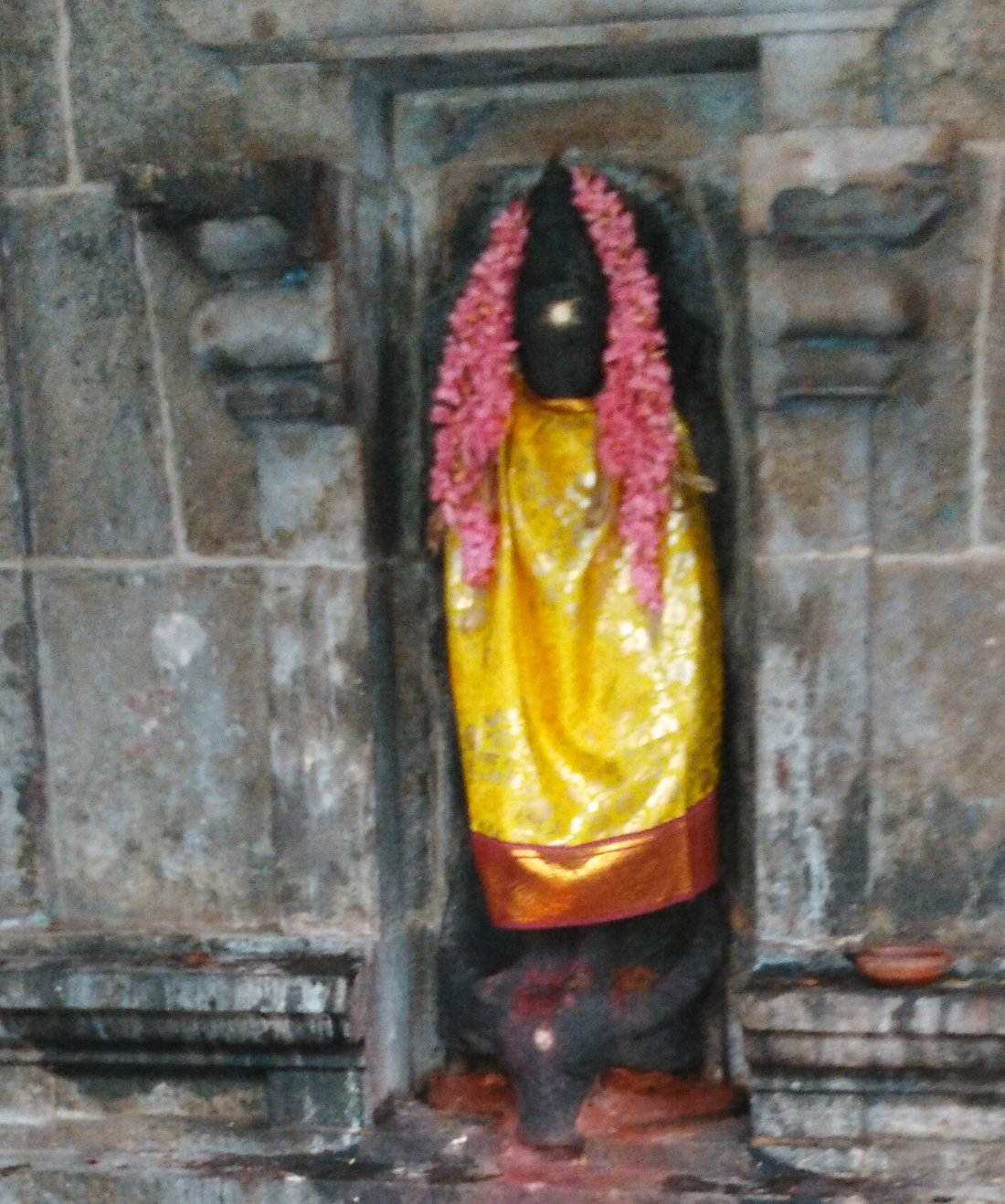 Goddess Parvathy can be seen here in a sitting posture with a coy look on her face. This idol depicts Goddess Parvathy as a newly-wed bride. This posture of the goddess is quite rare.

Thirumanancheri is considered to be a place where the marriage of Lord Shiva and Goddess Parvathy is celebrated every day (“Nithya Kalyana Kshetram”).

In a hall on the left side of the sanctum, the procession idols of Lord Shiva holding Goddess Parvathy’s hands in wedding form are placed. They are praised as Sri Kalyanasundarar and Sri Kokilambal. A large number of devotees can be seen performing special poojas to these procession idols every day. 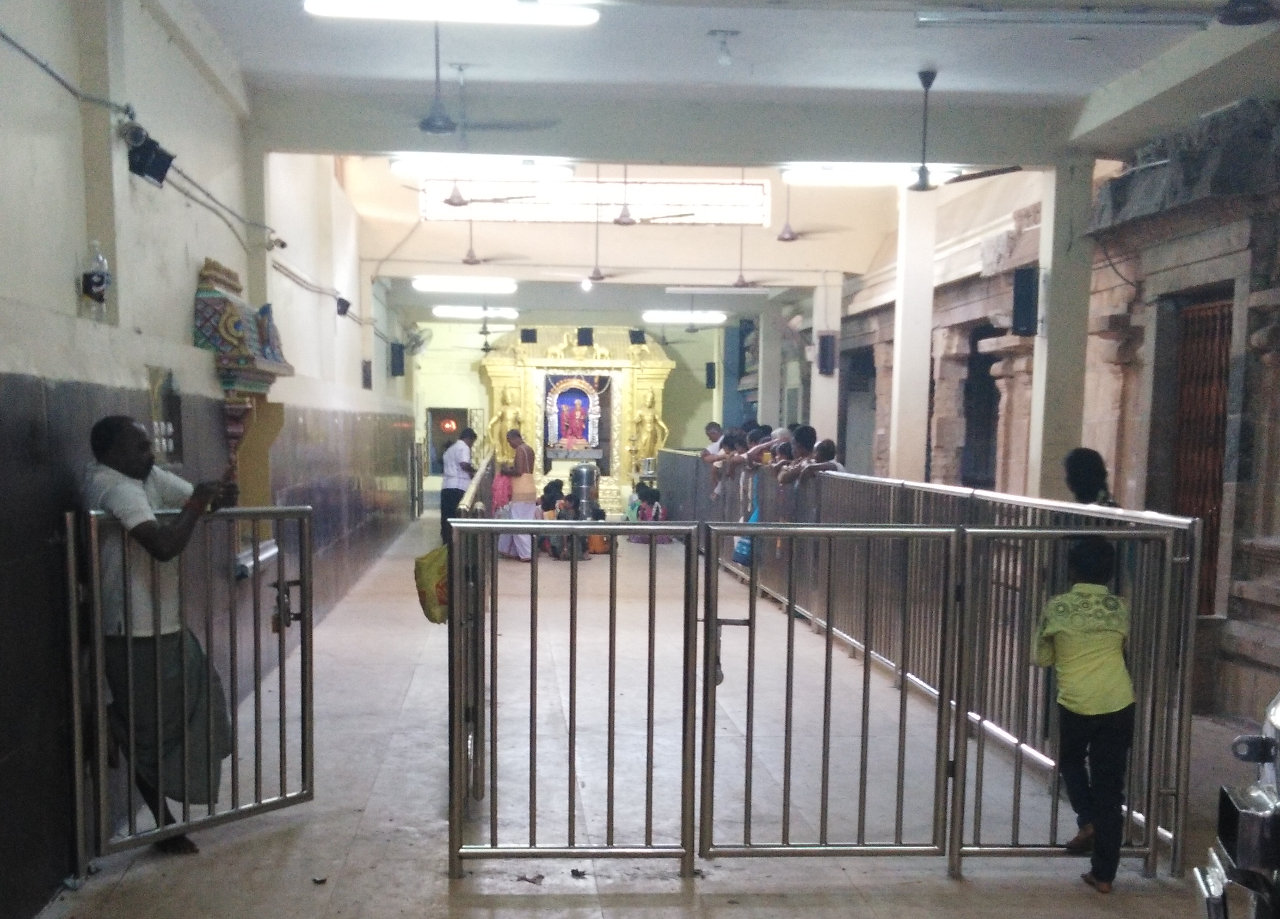 Every month during new moon day (Amavasai), special prayers are conducted in front of Lord Raahu in the morning hours. This is done so to seek the blessing of “Santhana Prapthi” (child boon).

Lord Raahu here is in his human form wearing earrings and other ornaments. 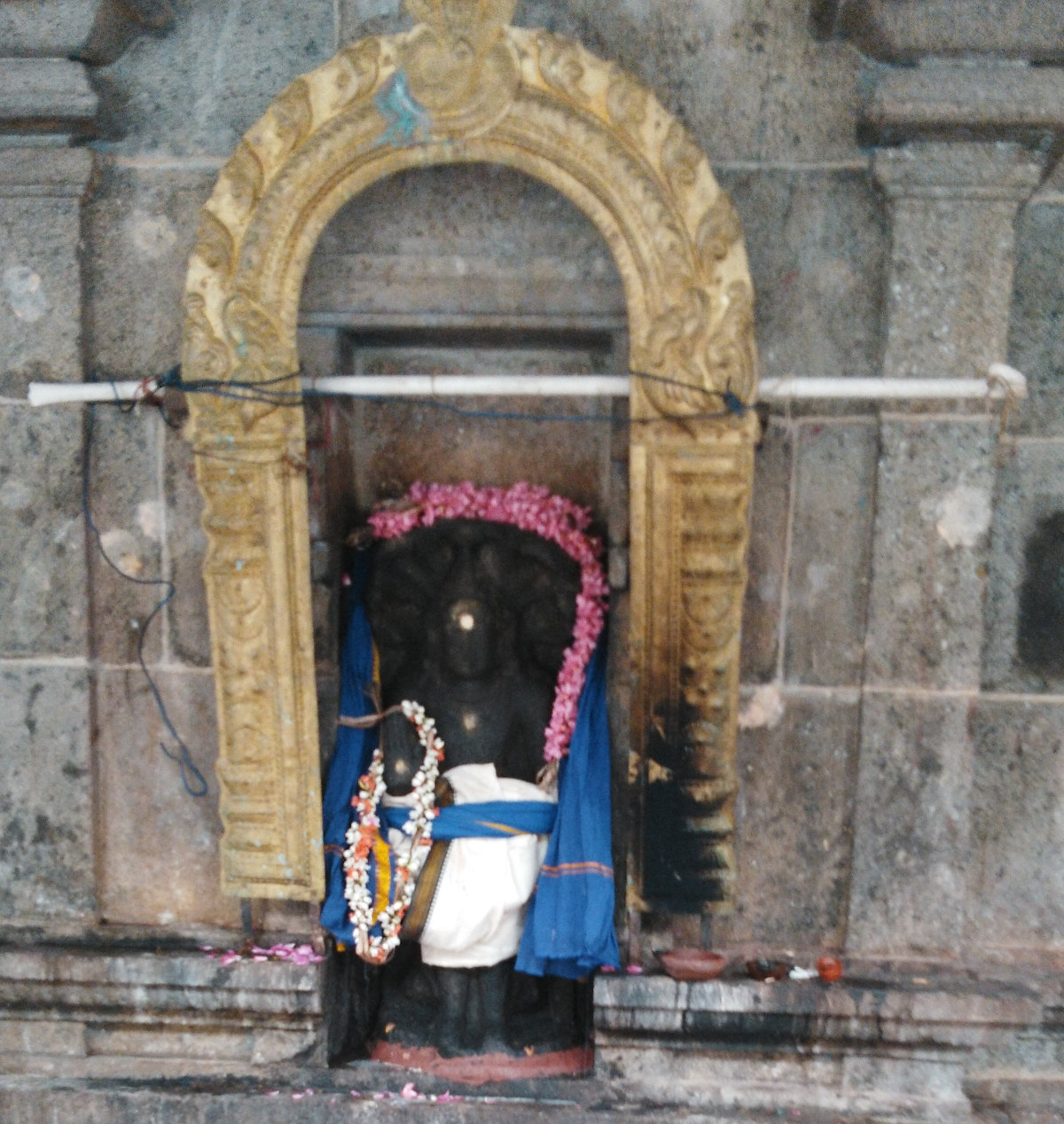 There is a well in this temple called the “Kubera well” / “Kubera Hundial”.

Karu Oomathai (black daturas), Vanni and Kondrai are also considered to be the sacred trees of this temple.

Devotees who are facing delays in their marriage can visit this place, offer two garlands to the lords and then take them back for themselves. It is believed that by doing so obstacles from marriage proposals will be removed. After successful marriage, the couples can visit this temple again with the same old garlands to perform the pooja and complete the worship.

This is a “parihara sthalam” for Raahu dosha. It is believed that those seeking “santhana prapthi” (child boon) can pray to Raahu here.

Devotees can get relief from the adverse effects of planets Raahu and Kethu by worshiping the lord here.

The 3-day Wedding festival of Lord Shiva and Goddess Parvathi is celebrated in a grand manner on the Poosam star day in the Tamil month of Chithirai (April-May).

Some of the other important festivals celebrated here are –

Aadi Pooram in the Tamil month of Aadi (July-Aug);

Thirukarthikai in the Tamil month of Karthikai (Nov-Dec); and

Thiruvadhirai in the Tamil month of Margazhi (Dec-Jan). 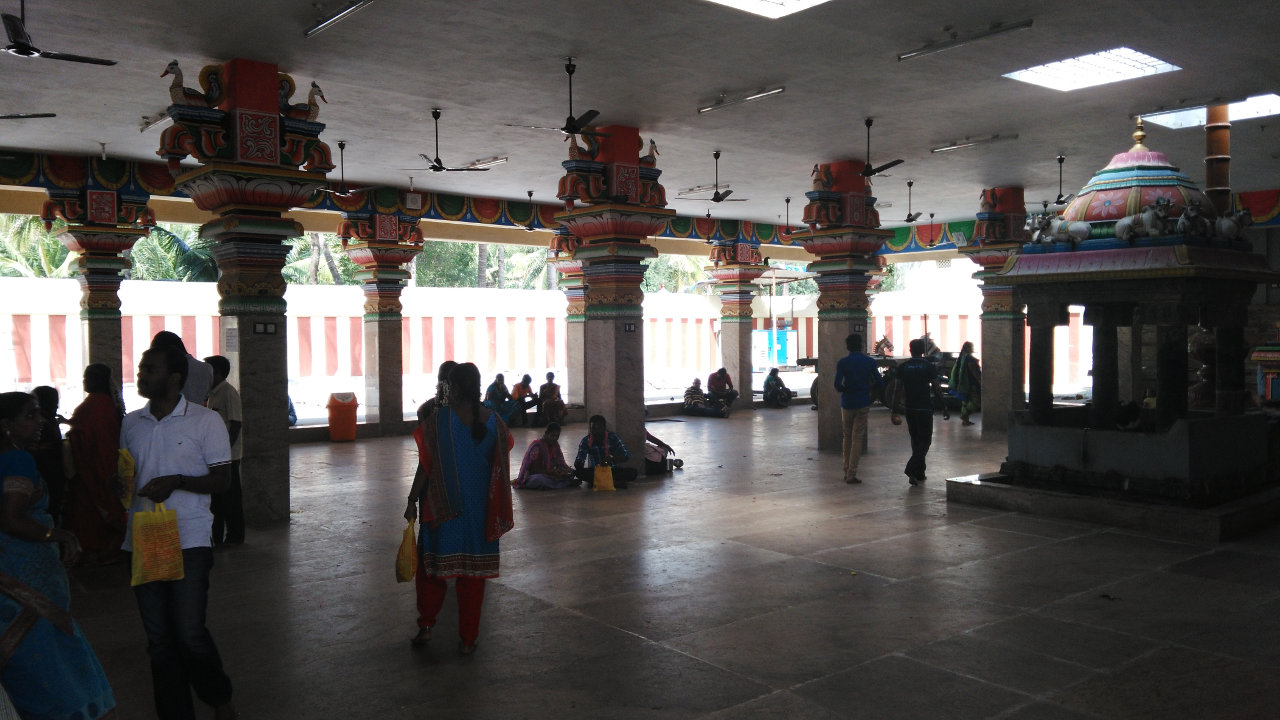