Thiruvotriyur is about 25 kms from Koyambedu Bus Terminal and 8 kms from Central Railway Station, Chennai. There is a railway station in Thiruvotriyur (electric railway line) and this temple is situated about one kilometre away from it.

This temple is one of the Saptha Vidanga Sthalams of Thondai Nadu as Lord Thiyagaraja is the main deity of this temple.

This temple is said to be more than 1500 years old and was built in the Pallava and Chola dynasties.

Since Lord Shiva blessed Lord Brahma to create the world at the time of “Pralaya flood” (dissolution) by making way for the pralaya water to recede, this place is called Thiru Otriyur (“votra” or “vatra” in Tamil means receding water). The legend is that Lord Shiva took the form a huge fire to make the water recede and he stayed here as a Swayambu lingam under a Makizha tree. It is said that this is the first (Adhi in Tamil) Swayambu lingam that appeared in the earth after the Pralaya, hence the lord here is named “Adhipureeswarar”. 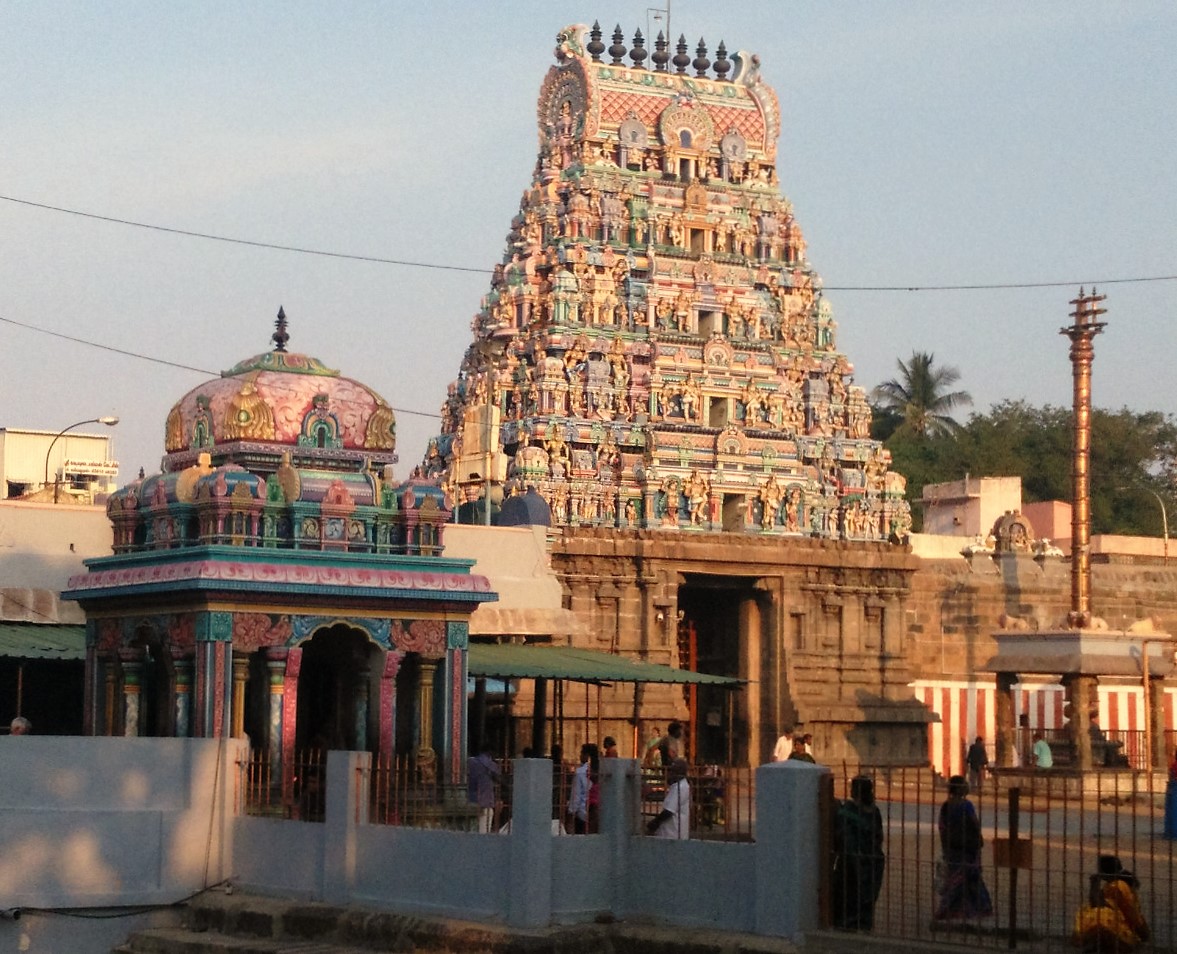 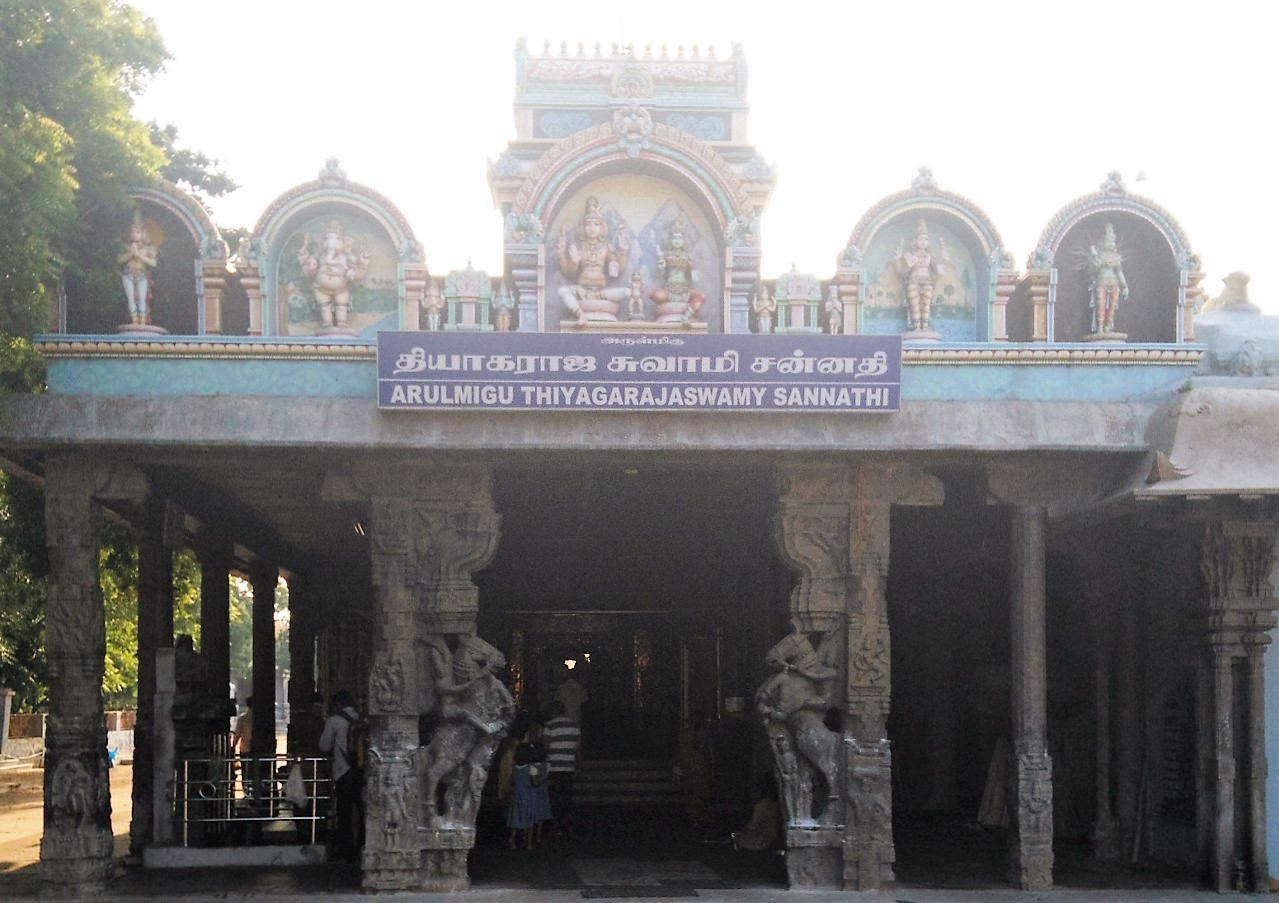 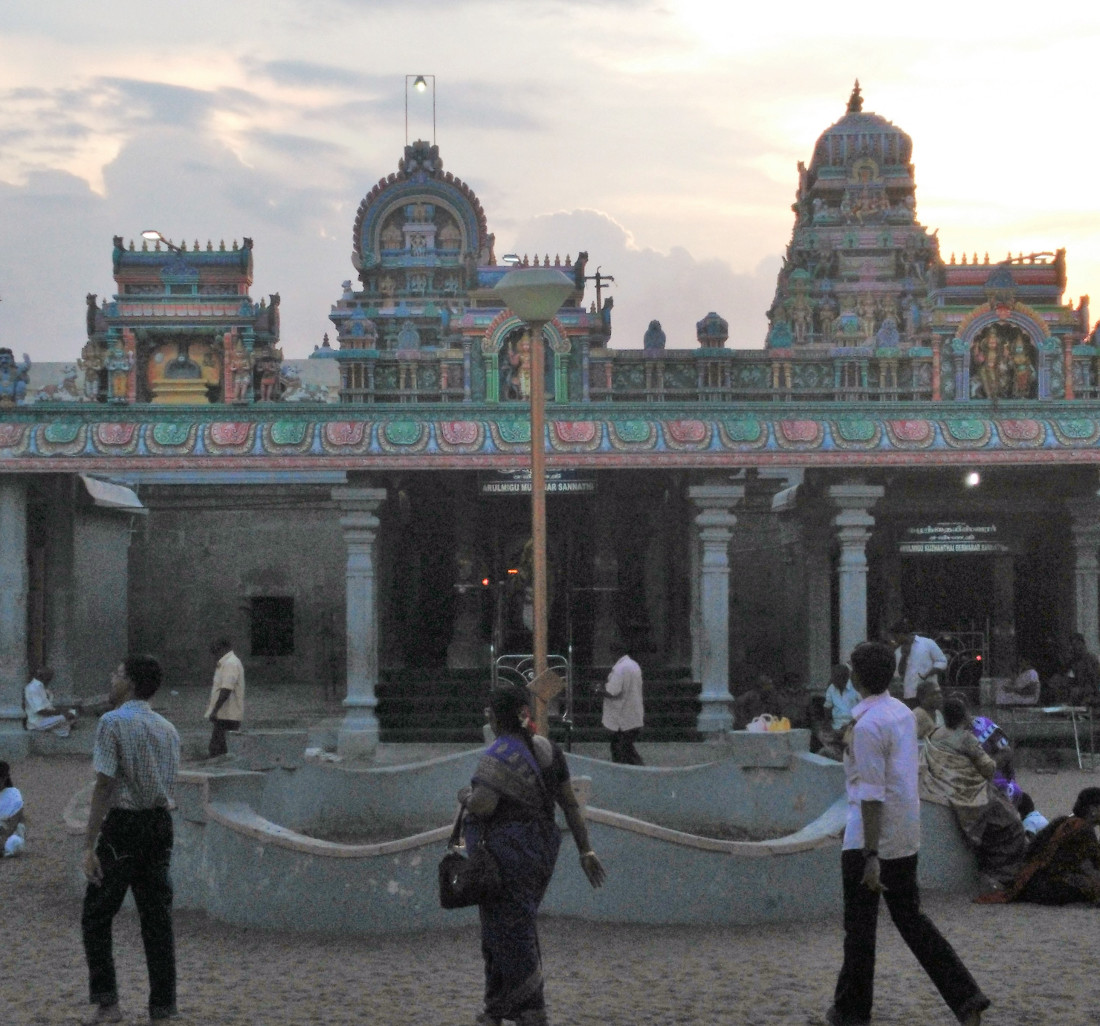 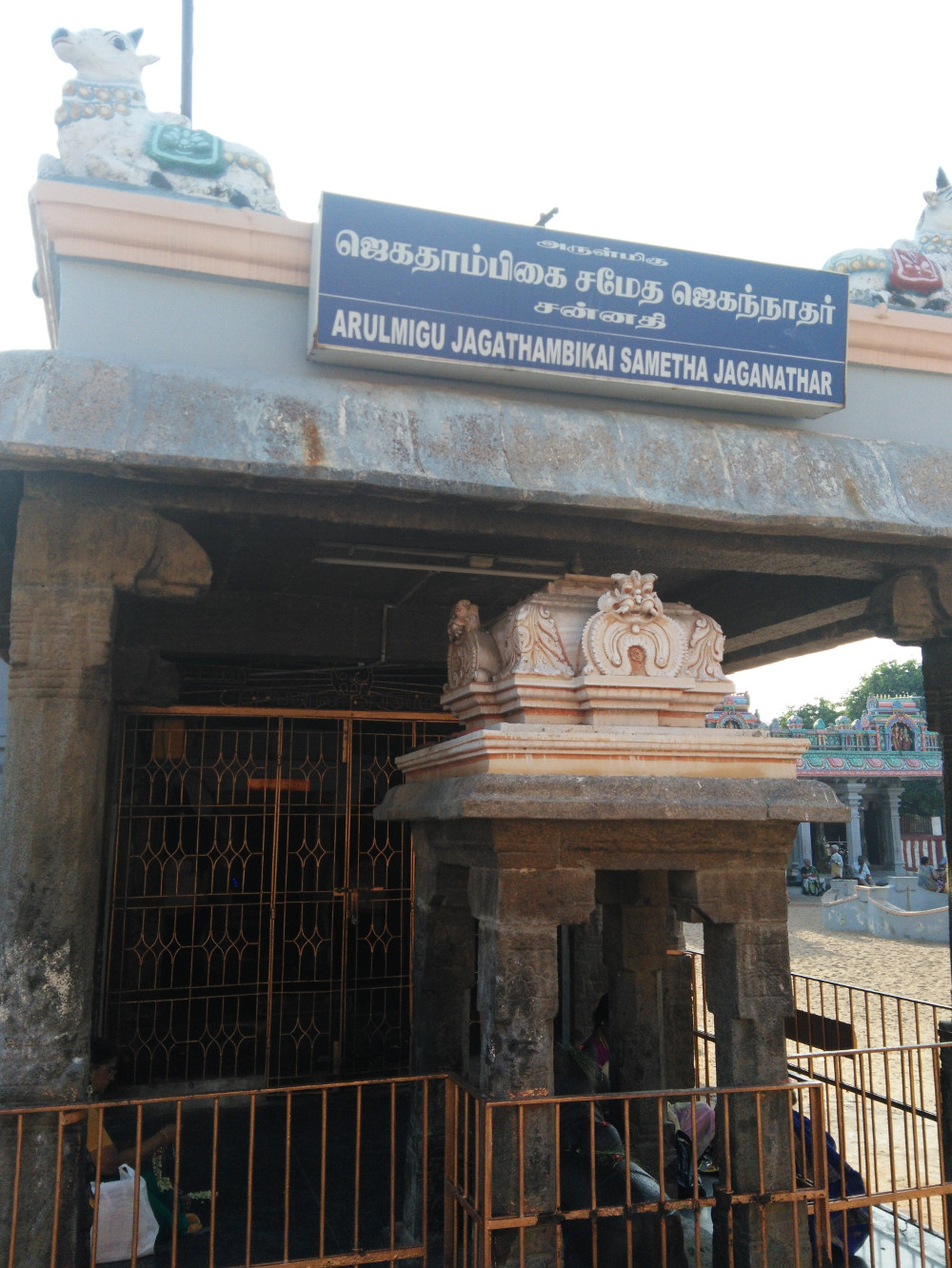 Once, two demons - Madhu and Kaithaba tricked the celestial gods to steal the Veda, chopped it into pieces and hid it in the bottom of the sea. Devas sought the help of Lord Mahavishnu to recover the Vedas. After worshiping Lord Shiva here, Lord Mahavishnu fought the demons and brought the Veda back to this place. Lord Shiva put it back in order and purified it.

Another legend associated with this place is that serpent Vasuki (king of serpants), who had received “Shiva Dheekshai” from Sage Upamanyu, had worshiped Lord Shiva here. Impressed by his penance, it is believed that Lord Shiva appeared from the ant-hill, blessed him and wore him as an ornament around his neck. Hence the lord here is called “Otreeswarar” and “Padampakkanathar”.

Thiruvotriyur is the birth place of Kaliya Nayanaar, one of the 63 Nayanmars and a staunch devotee of Lord Shiva. He was a very wealthy oil merchant and wanted to perform services for Lord Shiva. Aware that lighting of lamps in the temple is one of the noblest services, he started lighting the lamps (“Thiruvilakku Thondu”) in and around the temple every day without fail. Lord Shiva wanted to test his piety and made him poor. As Kalianar was left with no money to buy oil for the lighting of lamps -  he sold all his possessions, did manual labour, and even tried to sell his wife but found it impossible. Finally, he decided to cut his throat and light the lamps with his blood. Lord Shiva appeared before him. made his devotion public and elevated him to the status of a Nayanar. This event is celebrated in the Tamil month of Aadi on Jyeshtha star day (Kettai in Tamil). On this day people light lamps in and around this temple to honour Kaliya Nayanar.

Once, Elelasingar - an ardent devotee of Lord Shiva was in possession of some valuable ornaments which were supposed to be given to the king. Two Shiva devotees came to him from Kasi and asked him for those ornaments. It is believed that Lord Shiva instructed Elelasingar to give those jewels to the devotees which he promptly obeyed. When king came and asked for the ornaments, Elelasingar stood speechless. However, Lord Shiva came to his rescue and gave him those precious jewels. Hence, Lord Shiva here is also praised as “Manickathiyagar” (Manickam in Tamil means Diamond stones).

Another legend associated with this temple is that a king from the “Surya Vamsam” dynasty - Maan Dhada, a staunch Shiva devotee, established many charitable institutions. Because of his continued charitable deeds his longevity was increasing. He was vexed with his life on earth and yearned for a peaceful death. He consulted with many learned scholars and they advised him that his longevity was due to his charitable deeds. They told him to stop all his charitable and religious donations henceforth.

Accordingly, he wrote a deed and kept it in a safe but still his death was not forthcoming. Again, he called and consulted his advisors who asked him to show the deed. Surprisingly, his deed had been modified and had an insertion of the words “Except Thiruvotriyur”, which the king did not write. The king realized and strongly believed that Lord Shiva himself had done this correction. Thus, the lord here is also called “Ezhuthariyum Peruman”, literally translated as the “lord who knows how to write”.

There is a mention about this incident in the celebrated Peria Puranam written by Saint Sekkizhar.

Another legend associated with Thiruvotriyur is that concerning Saint Sundaramurthy Nayanar’s life. It is believed that he was an attendant of Lord Shiva by the name Alala Sundararan in Mount Kailash. There he came across two girls, Aninthithai and Kamalini, who were attendants to Goddess Parvathi and wanted to marry them. Knowing his desire, Lord Shiva blessed them to born on earth. Alala Sundaran was born as Nambiyarurar, Kamalini as Paravai Nachiyar and Aninthithai as Sangili Nachiyar, in different locations.

The wedding event under the Makizha tree is known as “Makizhadi Sevai” and Lord Shiva’s foot prints can be seen under this tree. Devotees who are facing obstacles in their wedding proposals worship the lord’s feet here and adorn it with sandal paste with the hope that the obstacles would be removed.

Makizha tree, the Sthala viruksham of this temple, where Sundaramurthy Nayanar is believed to have married Sangili Nachiyar, can still be seen in the second corridor of this temple.

There are two shrines for Lord Shiva – one for Sri Adipureeswarar and the other for Sri Otreeswarar. Similarly, there are two separate shrine for Goddess Parvathy - Vadivudai Amman and Vattaparai Amman. The shrine of Goddess Vattaparai Amman is located where Durgai is normally seen in other Shiva temples. In front of this goddess, a round rock (vatta parai in Tamil) can be seen. 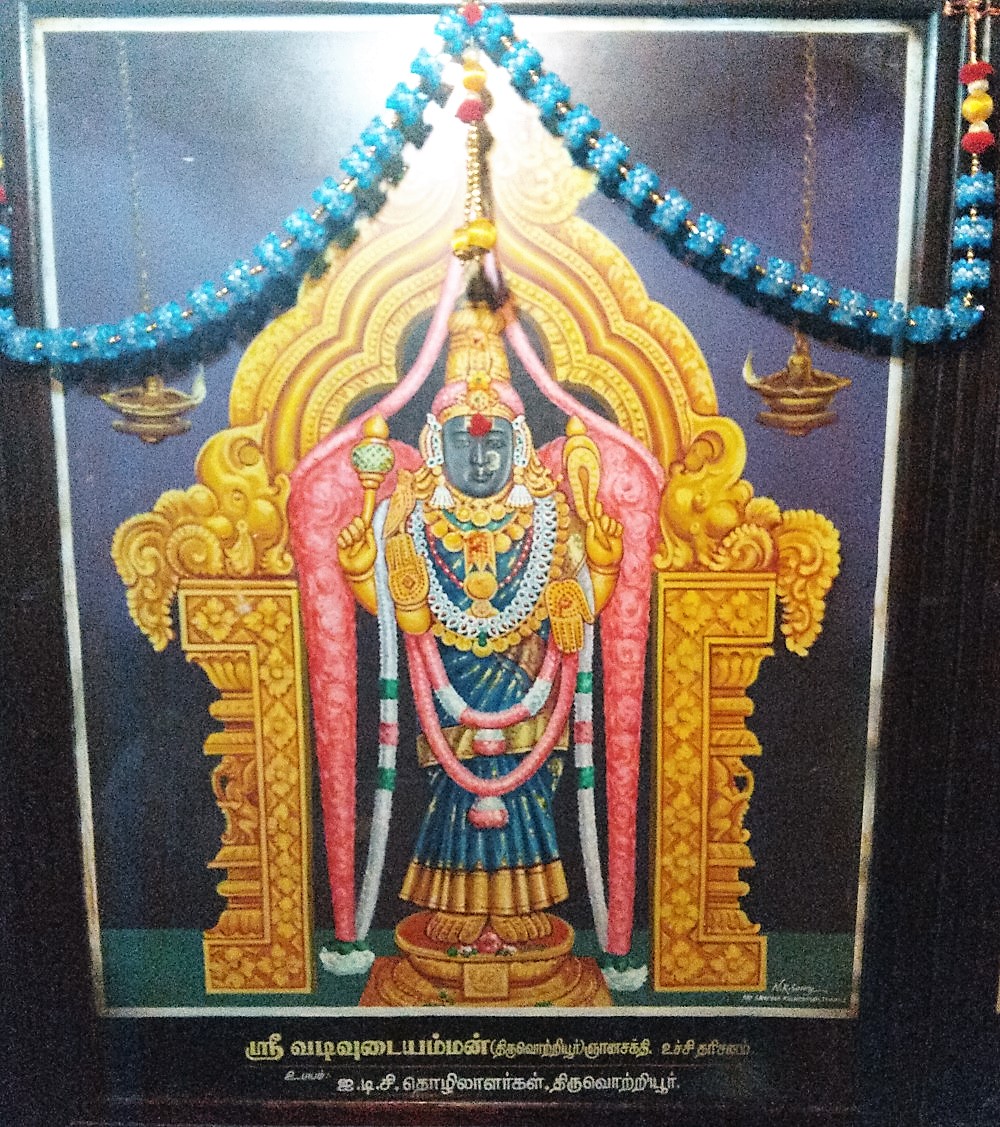 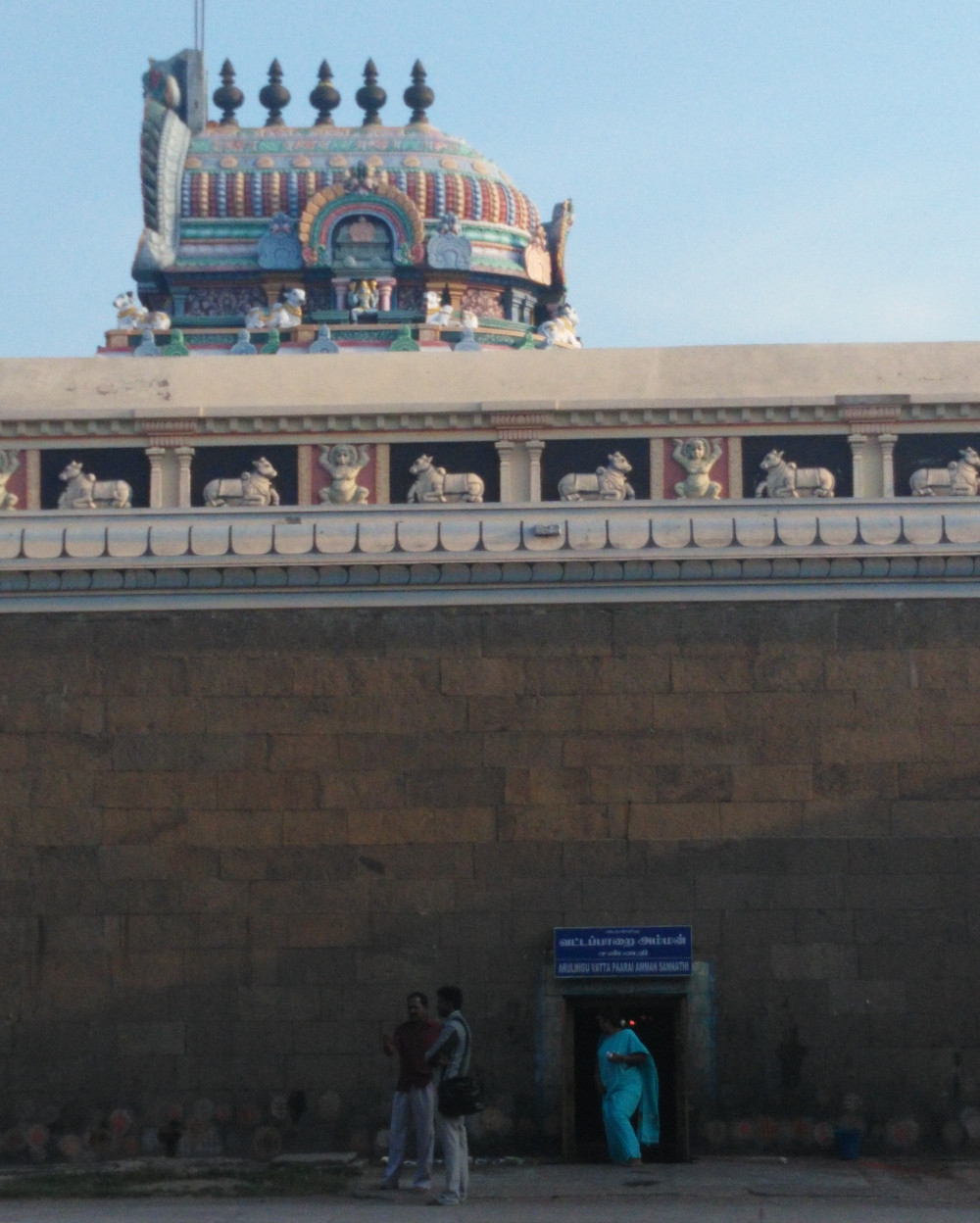 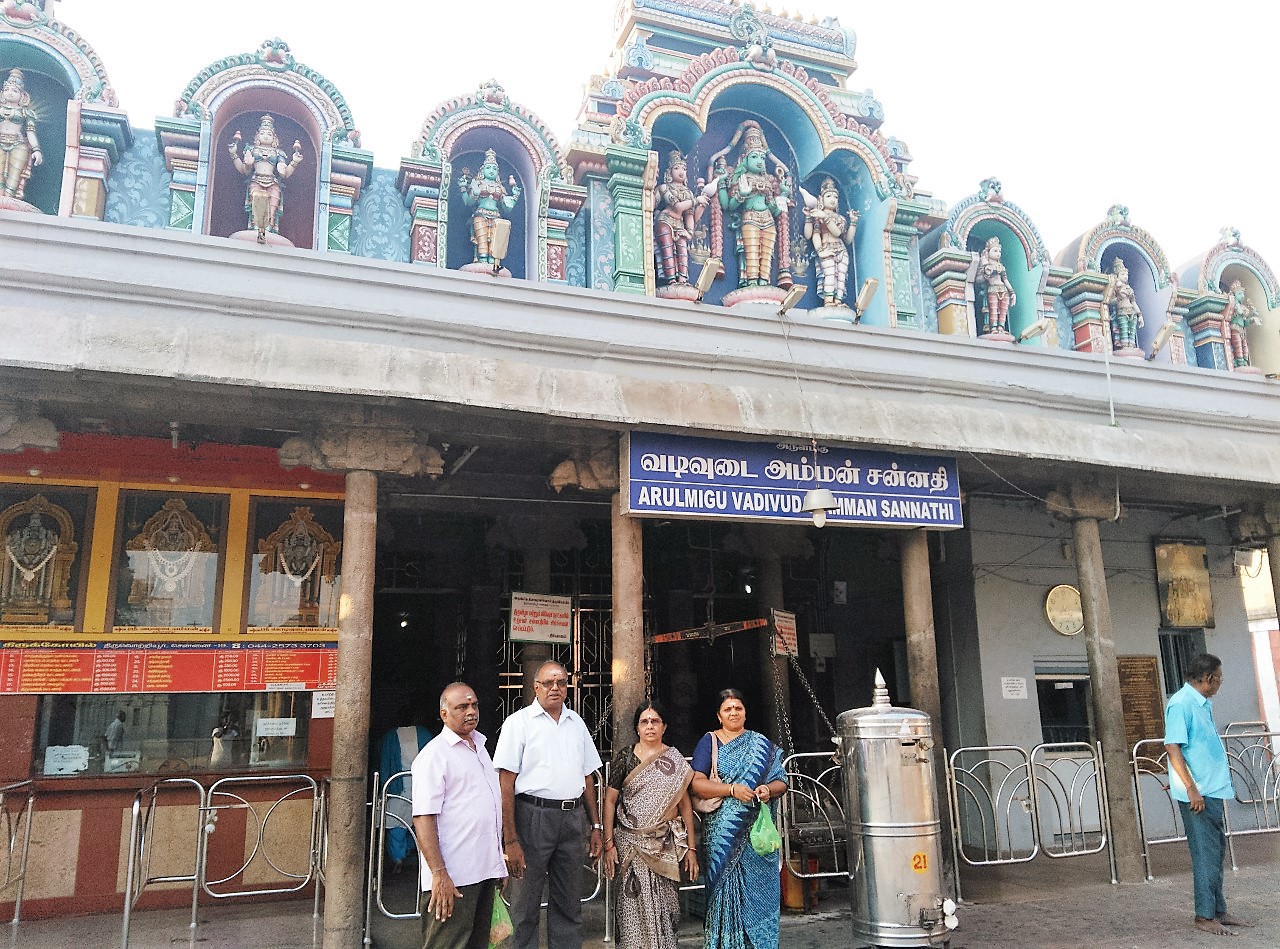 The main deity here is a Swayambu lingam in the form of an ant-hill with Lord Mahavishnu on the right side and Lord Brahma on the left side. Abhishekam is performed only to the Avudayar (base) and not to the lingam itself. On the full moon day in the Tamil month of Karthikai, the covers for the lingam are removed and “Punugu (civet) and Sambirani (styrax resin) oil” are smeared. One can see and worship the lingam as an ant-hill itself without the cover for three days only and thereafter for the entire year it will be covered. It is believed that Lord Vishnu, Lord Brahma and serpent Vasuki are worshipping Lord Shiva during these three days.

Another interesting aspect of this temple is that everything is present in duplets here. There are two presiding deities – Sri Adhipureeswarar and Sri Otreeswarar; two goddesses – Sri Vadivudai Amman and Sri Vattaparai Amman; two sacred trees - Athi and Makizham; two sacred theerthams -Brahma and Nandhi theerthams and two pooja procedures - Karana and Kameeka.

This is one of the seven temples (Saptha Vidanga) in Thondai Nadu where Lord Thiyagaraja can be seen. His dance performance in this temple is called Ananda Thandavam. Hence the lord here is also known as “Ananda Thiyagesar”.

The Tri-Shakti temples - Itcha, Kriya and Gnana Shakthis are very popular and are of great significance. Of these, Sri Vadivudai Nayaki at Thiruvotriyur is considered to be Gnana Shakti.

The other two Shakti shrines are - Thiruvudai Nayaki at Melur and Kodi Idai Nayaki at Vada-Thirumullaivayil. These three idols are said to have been created by the same sculptor. It is believed that worshipping these three goddesses in a single day (especially on the full moon day) at morning, midday and evening rewards the devotees with manifold benefits. On full moon days, these three temples are open for the devotees throughout the day. In Thiruvotriyur, only Namboodhiris (priest) of Kerala can be seen performing the poojas for Vadivudai Amman.

It is also believed that as per Nandhi’s wishes, Lord Shiva blessed him to witness his dance which he performed while being in a seated posture. This performance is also believed to have been witnessed by Lord Mahavishnu, Lord Brahma, Romarishi, Vanmiki Rishi, Serpent Vasuki and Chandran.

In this temple, it is believed that Lord Shiva blessed Sage Agasthiar with his wedding dharisanam.

It is believed that all the 27 Nakshatrams (constellations) have worshipped Lord Shiva here to seek absolution and have stayed in this temple as Shiva lingams. All the 27 Shiva lingams, one for each Nakshatram, can be seen in the corridors.

It is said that Kavi Chakravarthi Kambar translated Valmiki’s Ramayan from Sanskrit to Tamil in this temple only. It is also believed that every day he would pray to the Goddess Vattaparai Amman before starting his work. The legend is that the Goddess took the form of a woman and helped him by holding a torch while he was writing.

Saint Arunagirinadhar has also sang two songs in praise of Lord Murugan of this temple in his revered Thirupugazh.

This temple also has a shrine for Saint Pattinathar - a reputed Tamil ascetic-poet. He is also praised as “Thavaraja Singam” and he rendered many songs about Goddess Vadivudai Amman. It is believed that Pattinathar, a merchant from Poompuhar, worshiped to Lord Shiva to seek salvation. Lord Shiva appeared before him, gave him a sour sugarcane and asked him to travel to many places with it. The lord further advised him that when he felt sweetness at the end of the sugarcane, he would attain salvation. It is believed that it happened at this place - Thiruvotriyur. Realizing that his life was coming to an end, it is believed that Pattinathar asked his followers to cover him with a bowl. When they removed the bowl, to their surprise, they found a lingam in his place. Pattinathar had attained salvation and his Jeeva Samadhi (a shrine) was built near the Thiruvotriyur temple.

It is believed that many poets and sages including Kambar, Arunagirinathar, Muthuswamy Dikshithar, Ramalinga Swamigal and Maraimalai Adigal have worshipped Lord Shiva here.

Saint Thiyagaraja Swamigal, the Carnatic composer and an ardent devotee of Lord Rama visited this temple and composed the “Thiruvotriyur Pancharatna” (5 Gems) in praise of the Goddess Sri Thripurasundari.  He had never sung about any other god or goddess other than Lord Rama, but after seeing Goddess Parvathi, he was mesmerized by her beauty and sung a song.

It is believed that just entering this temple itself will cure one’s illnesses.

Devotees come to Thiruvotriyur temple and worship the lord here to seek wedding boon and for the welfare of their children. Devotees seeking child boon come here and pray to Lord Kuzhanthai Eswarar.

As there are 27 Shiva lingams representing the 27 Nakshatrams (constellations) in this temple, devotees who are facing the adverse effects of these Nakshatrams can be seen performing poojas here.

During the 10-day Brahmotsavam festival in the Tamil month of Masi (February-March) the following important events are observed.

On the full moon day, the Panchamurthy procession to seashore for theerthavari. On the sixth day, the wedding dharisanam to Sage Agasthiyar is celebrated.

On the tenth day, Lord Thiyagaraja’s 18 types of dance programmes are celebrated in a grand manner.