It is said that in ancient times this place was full of palm (Panai) trees and hence the place is called Panangkattur and the lord here is named “Sri Panangkatteeswarar”. However, now this place is known as Thirupanangadu.

As per the stone inscriptions installed in the temple, Devakottai Sri A.Ekappa Chettiar’s family had renovated and constructed this temple. The consecration ceremony (Mahakumbabishekam) was also conducted by them in the year 1928. Sri Ekappa Chettiar’s statue can be seen in the main hall of the temple. It is believed that in the year 1915, Ekappa Chettiar who was in a property litigation case, prayed to Lord Shiva for help. Further, after browsing the devaram book he selected the pathigam of this temple and started reciting it. He also committed himself to do something for this temple if the judgement in the legal case fell in his favour. Later, after he won the case he visited this temple and found that it was in ruins. He renovated it using all the money that he had got from the settlement. 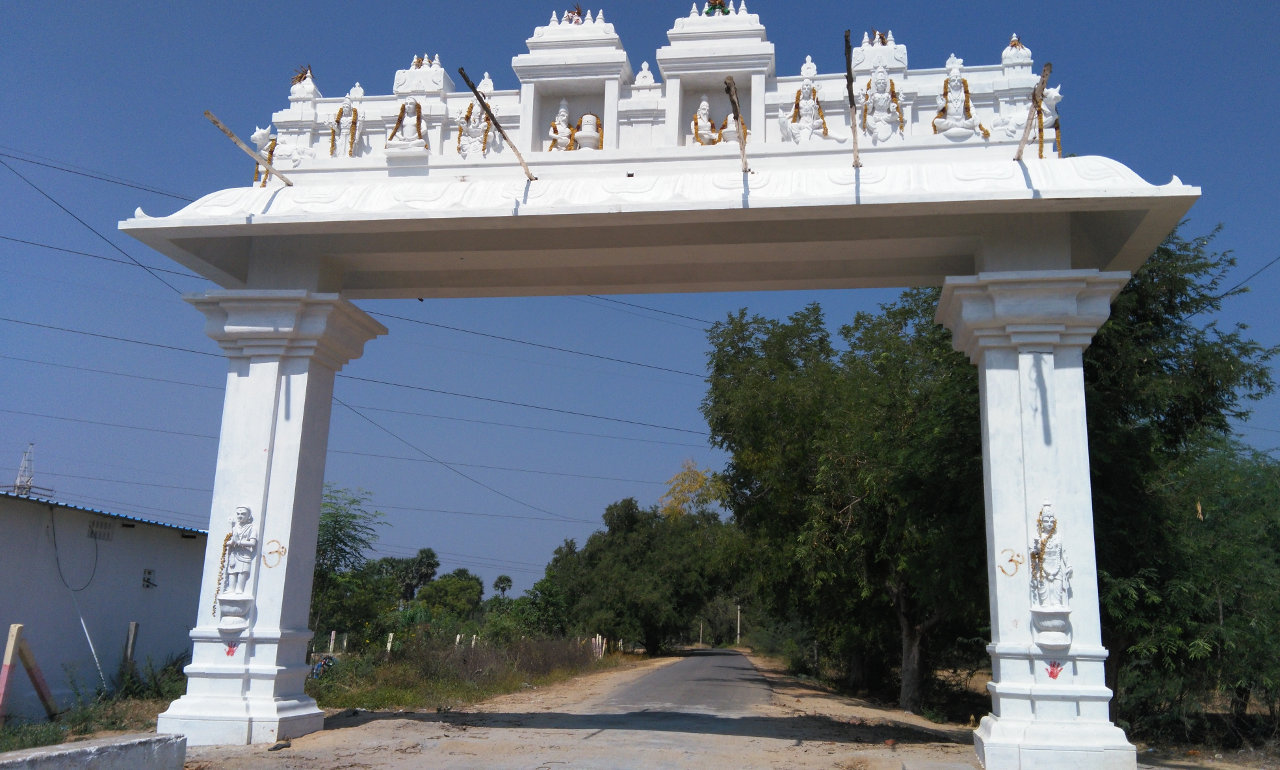 The legend is that when Saint Sundaramurthy Nayanar visited this place, Lord Shiva appeared before him in the form of an old man and offered food (Kattamudu). Sundarar laughed at him and said that when there is no water available here then what is the use of the food. The old man scratched the land under his feet and water started flowing. The old man disappeared and Sundarar realized that the old man was none other than Lord Shiva himself. He then followed the foot prints of a bull and found this temple. It is believed that Lord Shiva and Goddess Parvathi blessed Sundarar with their dharisanam. In his hymns, Sundarar refers to this place as “Vanparthan Panangkattur”.

The well which is believed to have been created by Lord Shiva, is called “Sundarar Theertham”.  It is well maintained and has a fencing around it. There is a small shrine nearby where Sundarar is believed to have had the food that Lord Shiva gave him. This Theertham and the shrine is at a distance of about one kilometre from the temple.  On the main road itself you can see a sign board pointing to this well. People say that the water level at Sundarar Theertham is just 3 feet whereas the nearby well’s water level is around 30 feet. 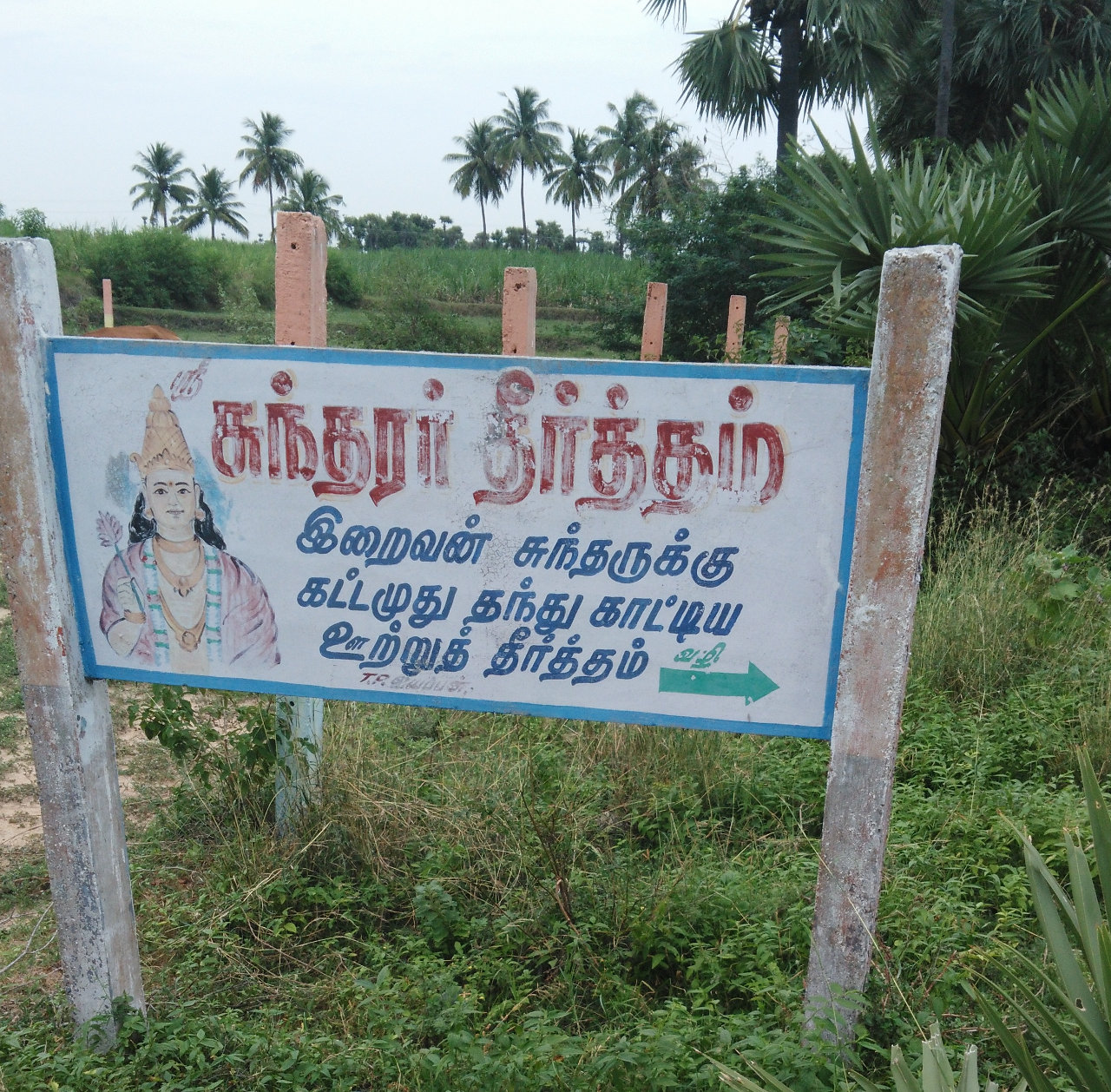 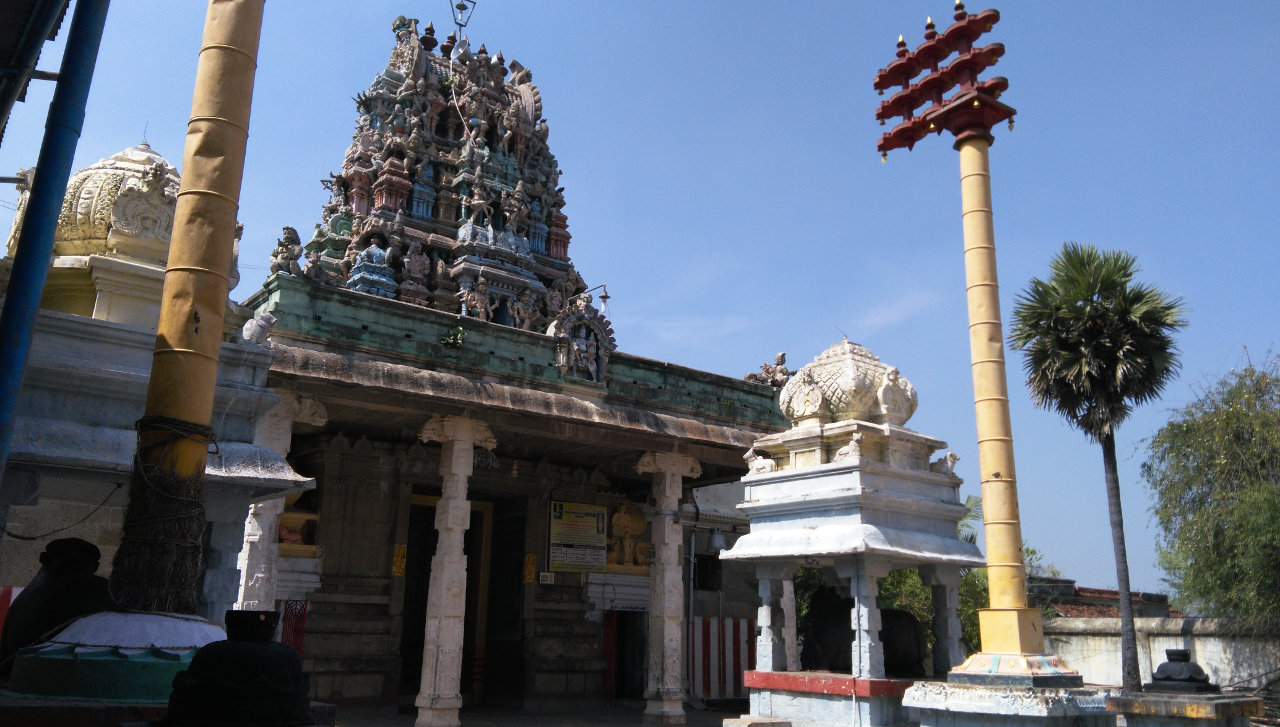 The legend is that when Sage Agasthiyar reached this place, he wanted to worship Lord Shiva and searched for a temple. He found another sage by the name of “Kottai Muniswarar’ (Yogananda Muniswarar) meditating under a neem tree. Agasthiyar asked him if there was a temple nearby, Muniswarar told him that there was a Shivalingam beneath this tree itself. It is believed that Sage Agasthiyar took the lingam out, installed it in a nearby shrine and worshiped it.

Pleased with the worship of Sage Agasthiyar, Lord blessed him with his dharisanam. Further it is believed that when Agasthiyar was looking to make offerings of fruits to the lord, the lord made the fruits from the palm tree fall on the lingam. Because of this incident, the lord here is named “Thalapureeswarar” (Thalam meaning Palm tree in Grantham). It is said that while leaving this place Sage Agasthiyar advised Sage Muneeswarar to look after this Shiva temple. In front of this temple, there is also a separate small temple for “Sri Kottai Muneeswarar”.

It is said that after some time, Sage Pulasthiyar had also visited this place and installed a lingam on the banks of river Palar and worshiped it. At a later date, this lingam is believed have been discovered by a Chola king who brought it to this temple and installed it next to the lingam that was installed by Sage Agasthiyar.

Another legend is that once, a staunch devotee called Panangkattu Thambiran prayed to Lord Shiva to provide drinking water to the local people. Lord conceded to his request and water started flowing from the lord’s head. This water was stored in a nearby tank called “Jada Gangai Theertham”. This is being used by locals even today.

It is also said that lords Brahma, Mahavishnu, Indiran and Sage Kannuva have worshiped Lord Shiva of this temple.

Since there are two lingams in this temple, this temple also has two separate sets of Nandhi, Pali Peedam (altar for making offerings) and flag post (dwajasthambam). Similarly, in both the outer sanctums, separate idols of lords Dakshinamurthy, Mahavishnu and Brahma can be seen.

The posture of one of the idols of Lord Dakshinamurthy’s is unique to this temple - with his right hand placed on his chest (“Chin muthirai” in Tamil).

Beautifully engraved Idols of Saint Agasthiar, Saint Pulasthiar and palm trees can be seen at the entrance of the sanctum sanctorum.

In the inner corridors, a beautiful stone palm tree with Lord Sundareswarar and Goddess Meenakshi can be seen.

The pillars of the main hall have intricate reliefs and sculptures. One such sculpture depicts Vali and Sugreev fighting with each other and another pillar depicts Lord Ram watching this fight. An interesting point to note about these pillars is that you can see Vali and Sugreev from Lord Ram’s relief whereas you cannot see Lord Ram from the pillar in which Vali and Sukreev reliefs are chiselled. Similar reliefs of Nagalingam, Garudazhvar, Mahavishnu and Anjaneyar can also be seen in other pillars.

Though there are two Lord Shiva’s shrines in this temple, Saint Sundarar mentioned about Lord Thalapureeswarar (also known as Sri Panangkatteswarar) only.

Another interesting aspect of this place is that there is a stone inscription in this temple stating that cutting down a palm tree is a sin.

In the outer corridor, there are two sacred palm trees - one male and the other female. It is believed that those seeking child boon can pray to the lord here by making offerings of palm fruits and then consuming it.

Devotees also pray for prosperity and relief from vision / eye sight related problems. They can also circumambulate these trees and worship Lord Shiva for removal of obstacles from their wedding proposals.

During Brahmotsavam, on the Masi Magam day, “Thiruvural” festival is celebrated on the banks of the river Palaru. The procession idol of Lord Ekambareswar of Kanchipuram is brought to this place.

During the Brahmotsavam festival, special poojas called “Kattamudhu” are also performed, to celebrate the incident of Lord Shiva of giving food to Saint Sundarar. 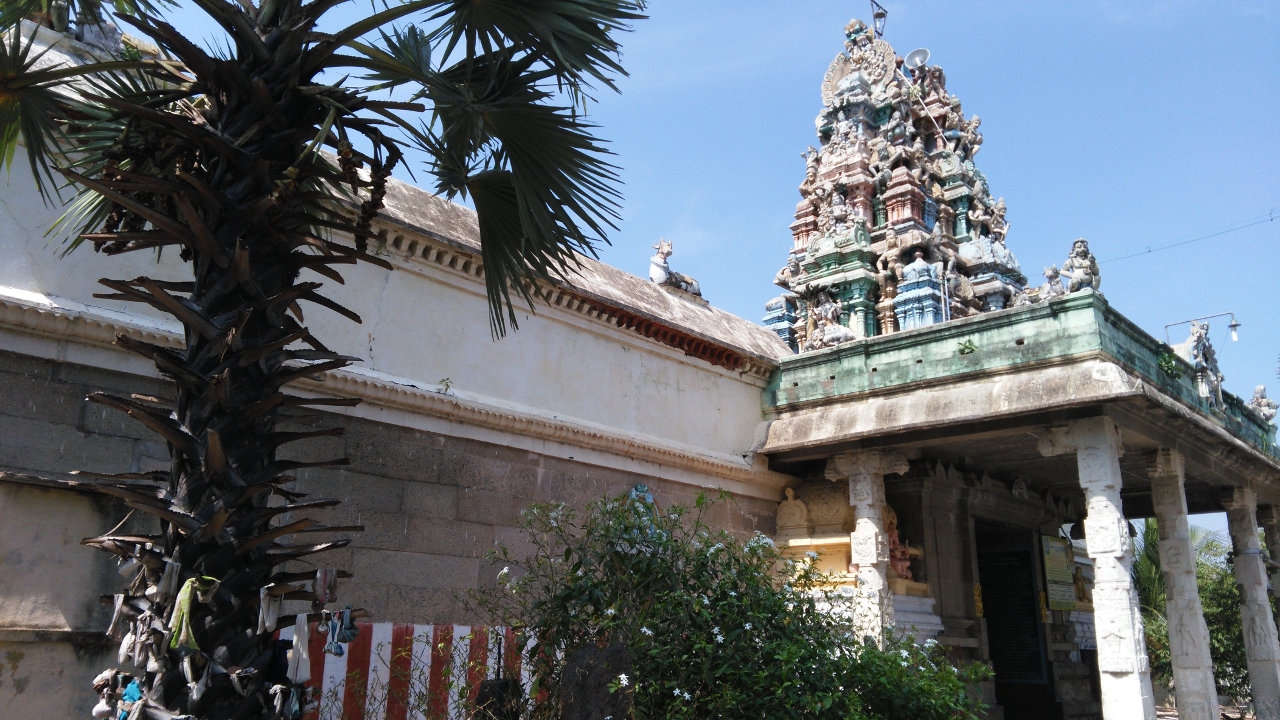 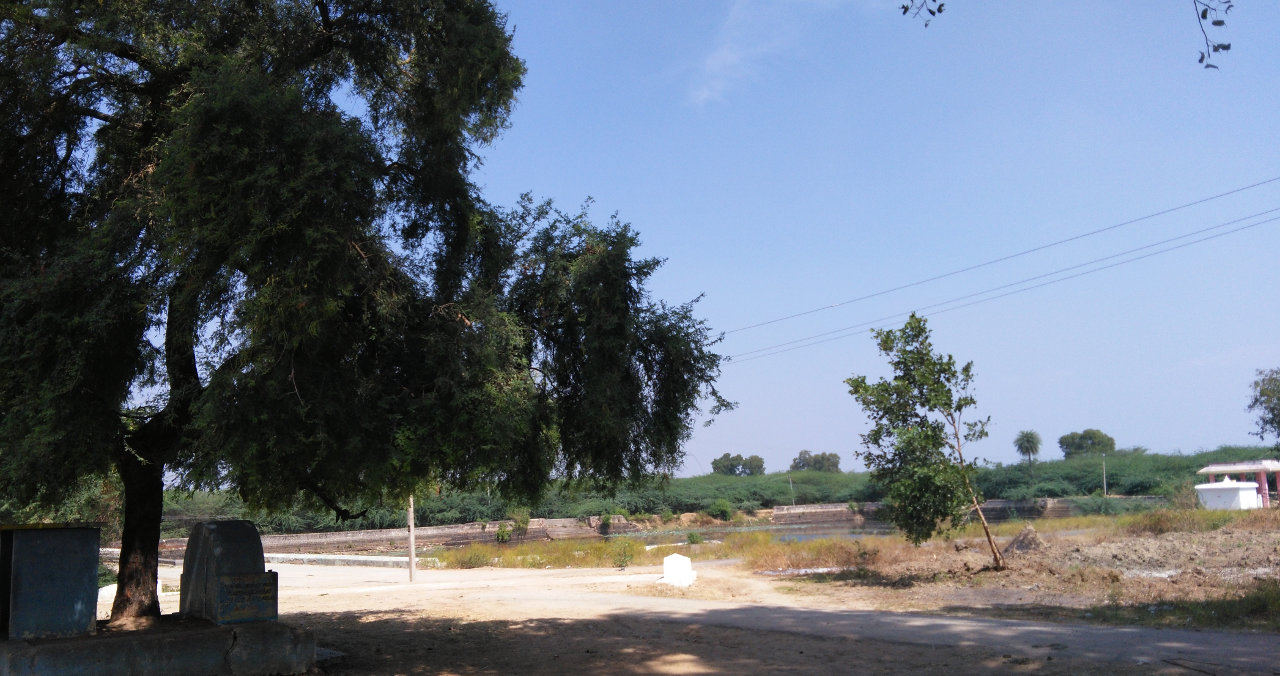 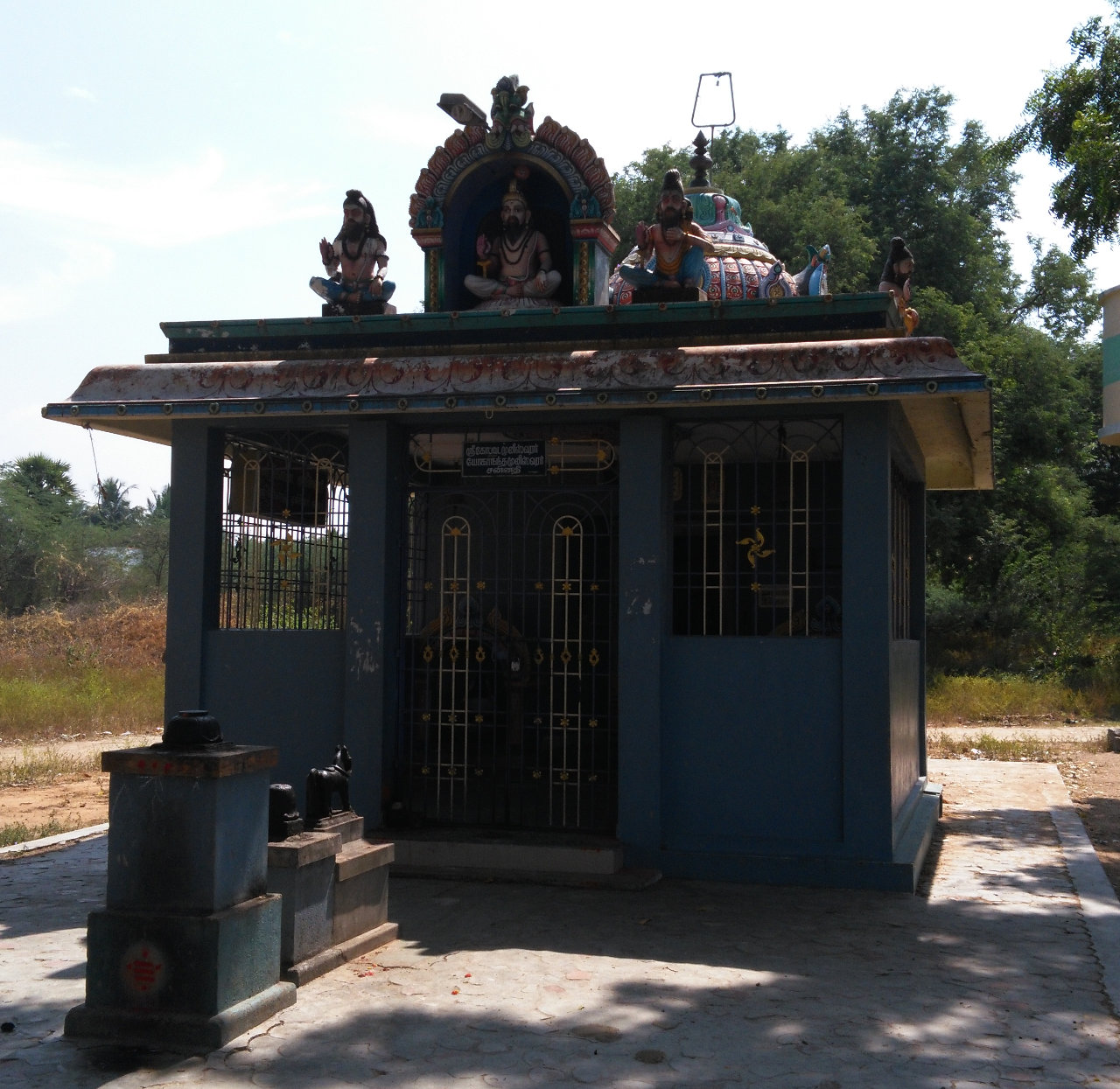 Listen to the Devara Pathigam