This temple is mentioned in Valmiki Ramayan and Silapathikaram. This underscores the antiquity of this temple.

This temple’s campus covers an area of almost 12 acres. The rivers, Kaveri and Manikarnigai, flow near this holy shrine. It is believed that taking dip in the river Manikarnigai is equivalent to taking dips in the 64 bath ghats in Kasi.

It is believed that Budhan performed his penance here and was relived from his “ali dosham”.

It is believed that Lord Brahma came to this place and performed rigorous penance in order to regain his memory. The method of penance he adopted here is known as “Samaadhu Nilai” (by holding his breath). Pleased with his penance, Lord Shiva, in the form of Lord Dakshinamurthy, taught him the “Brahmagnanam” again. Also, Goddess Parvathy is believed to have taught him the “Brahma Kalai” (“arts of brahma”). Hence, Goddess Parvathy here is known as “Sri Brahma Vidhyambigai”. There is a separate shrine here in the name of “Brahma Samaadhu”. 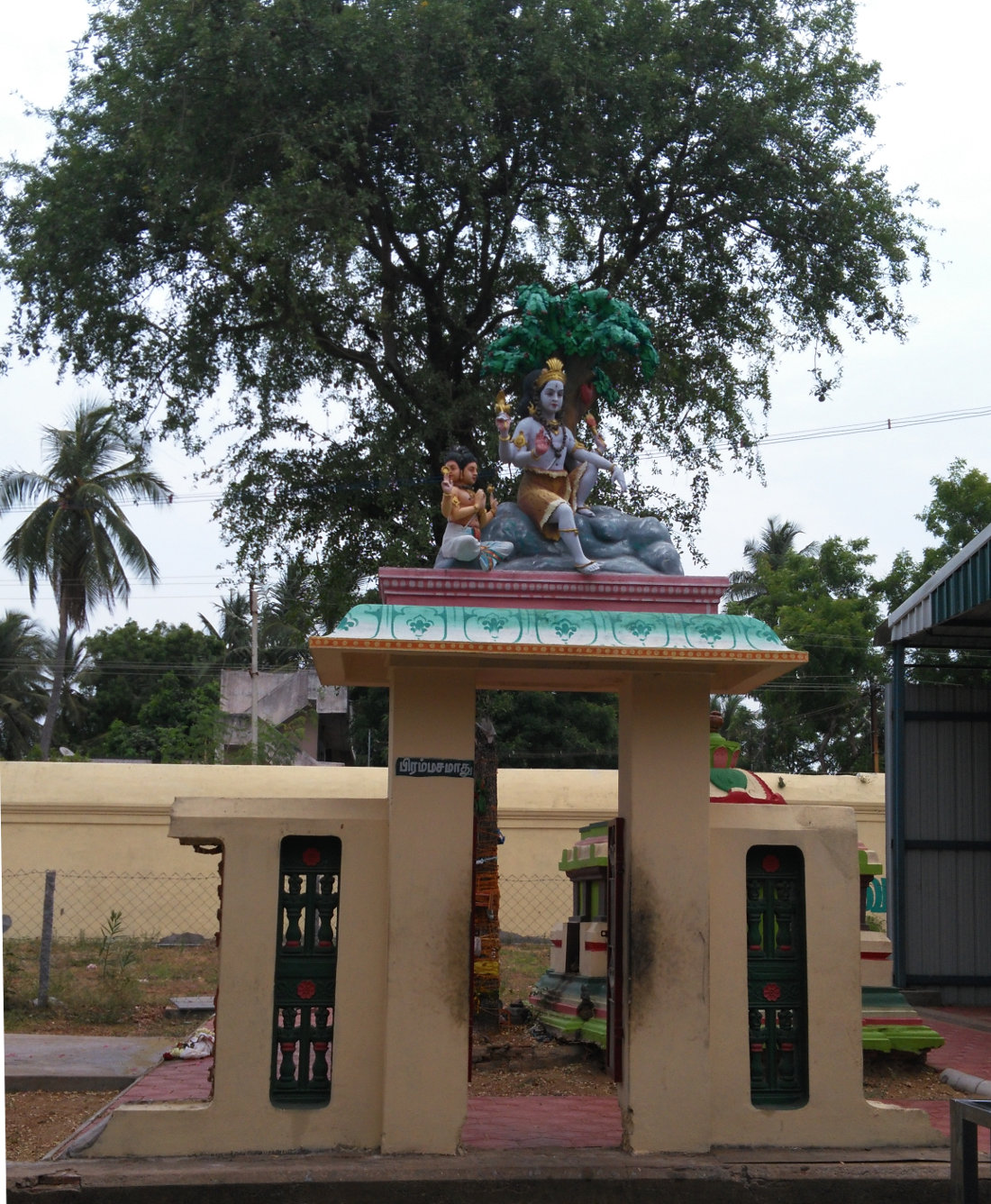 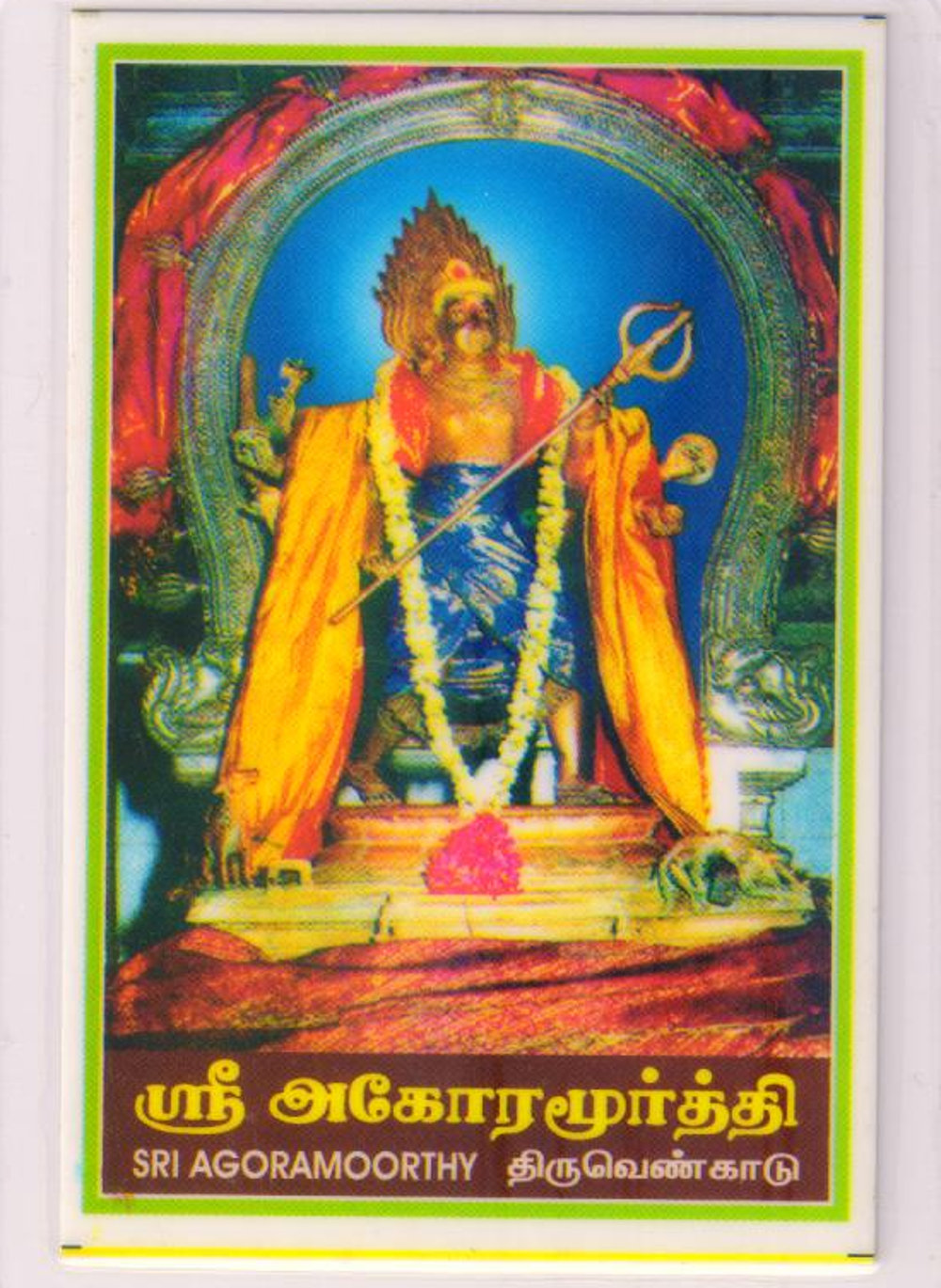 Thathpurusha faces east and represents spirituality that has destroyed the ego;

Aghoram faces south and represents the lord’s destructive and regenerative aspect; and

Another legend associated with this temple is that of demon Maruthuvan, son of demon Salanthiran. Maruthuvan was a staunch devotee of Lord Shiva. He performed rigours penance and was blessed with a trident (“Soolam” in Tamil). After receiving this blessing, he started terrorising the Devas. On the request of Devas, Lord Shiva instructed Nandhi to punish Maruthuvan. In the fight that ensued, Maruthuvan hit Nandhi in 9 places with the trident. On knowing this, Lord Shiva took the form of “Aghoramurthy” and vanquished the demon. This Murthy is the furious incarnation of Lord Shiva. It represents one of his five faces - “Aghoram”. It is believed that Lord Aghoramurthi killed the demon under a tree here. This tree can still be seen in the temple. The idol of Nandhi which is in front of the lord can be seen with 9 scars on its body.

There is a shrine for “Goddess Pillai Idukki ambal” in the corridor. It is believed that when Saint Thirugnanasambanthar came to this place, he found that this place looked like Mount Kailash and the sand dunes looked like Shivlingams. So, he was reluctant to step on this holy ground and called the Goddess Parvathy as “Ammaye” for help. On hearing his voice, Goddess Parvathy came there and carried the child Thirugnanasambanthar to the temple.

The place from where he called the goddess is known as “Kooppittan Kulam” and the idol of Vinayakar near this tank is known as “Sambanthar Vinayakar”. Devotees believe that by worshiping the goddess here and by making an offering of a cradle, they will be blessed with “Santhana Prapthi” (child boon).

Lord Yama, the Lord of Dharma and Death, was punished by Lord Shiva here for trying to take the life of Swedakedu, son of King Seyandan from a kingdom in North India. Yama prayed to Lord Shiva here to seek absolution for his sins.

Saint Meikkandaar, the first of the four “Santhana Kuravars” and the author of “Shivagnanabodham” is believed to have been born by the grace of Sri Swetharanyeswarar of this temple.  Meikkandaar’s birth name was Swethavanaperumal. There is a shrine for the saint on the banks of the Agni Theertham here.

As per Goddess Parvathy’s wish, Lord Shiva performed his “Ananda thandavam”. While performing this dance, water drops came out from his three eyes which formed the three theerthams of this temple.

As per legend, Budhan worshiped the lord here and was rewarded with a place in the Navagraham.

It is a customary here to offer green colour cloth to Lord Budhan while making other offerings.

It is believed that Saint Pattinathar was given “Shiva Dheeksha” by Lord Shiva himself here.

Other than the shrines of Lord Shiva and Goddess Parvathy, shrines and idols of Vinayakar, Murugan, Vallabha Ganapathy, Swedha Maha Kaali, Bairavar,

Solaiyappa Mudaliar with his minister, Periya Vaarana Pillayar, Dhana Vinayakar, Lakshmi and Saraswathi can be seen in the corridors.

In the “koshtam” (place surrounding the sanctum sanctorum), idols of Narthana Vinayakar, Metha Dakshinamurthy, Mahavishnu, Brahma and Durgai can be seen.

There is a separate shrine for Lord Budhan. 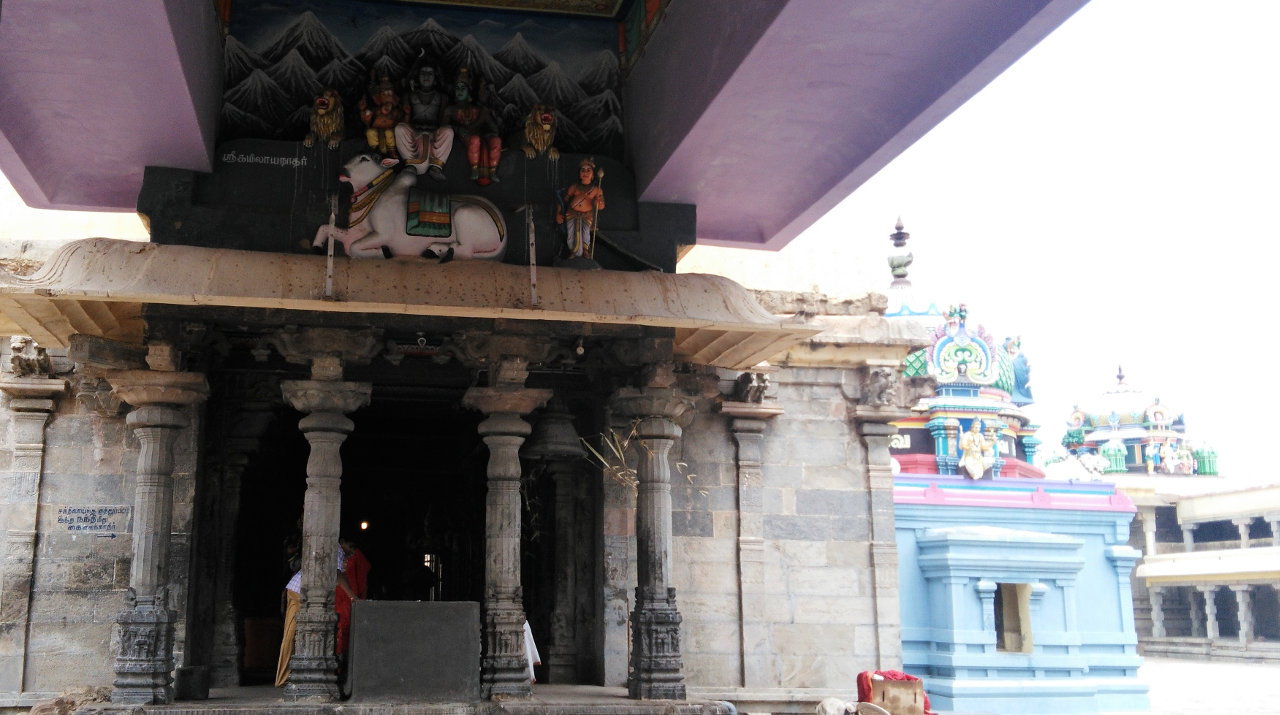 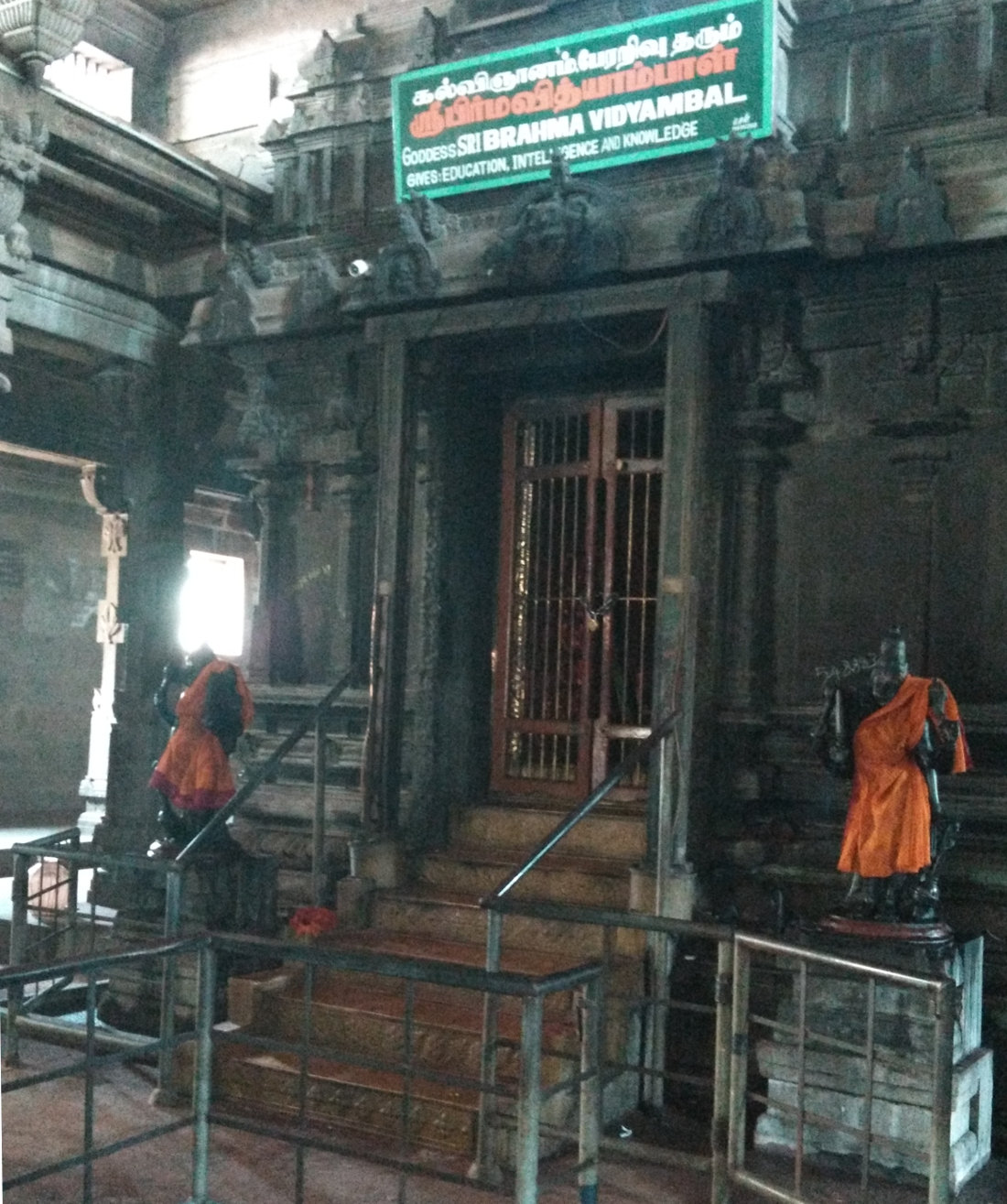 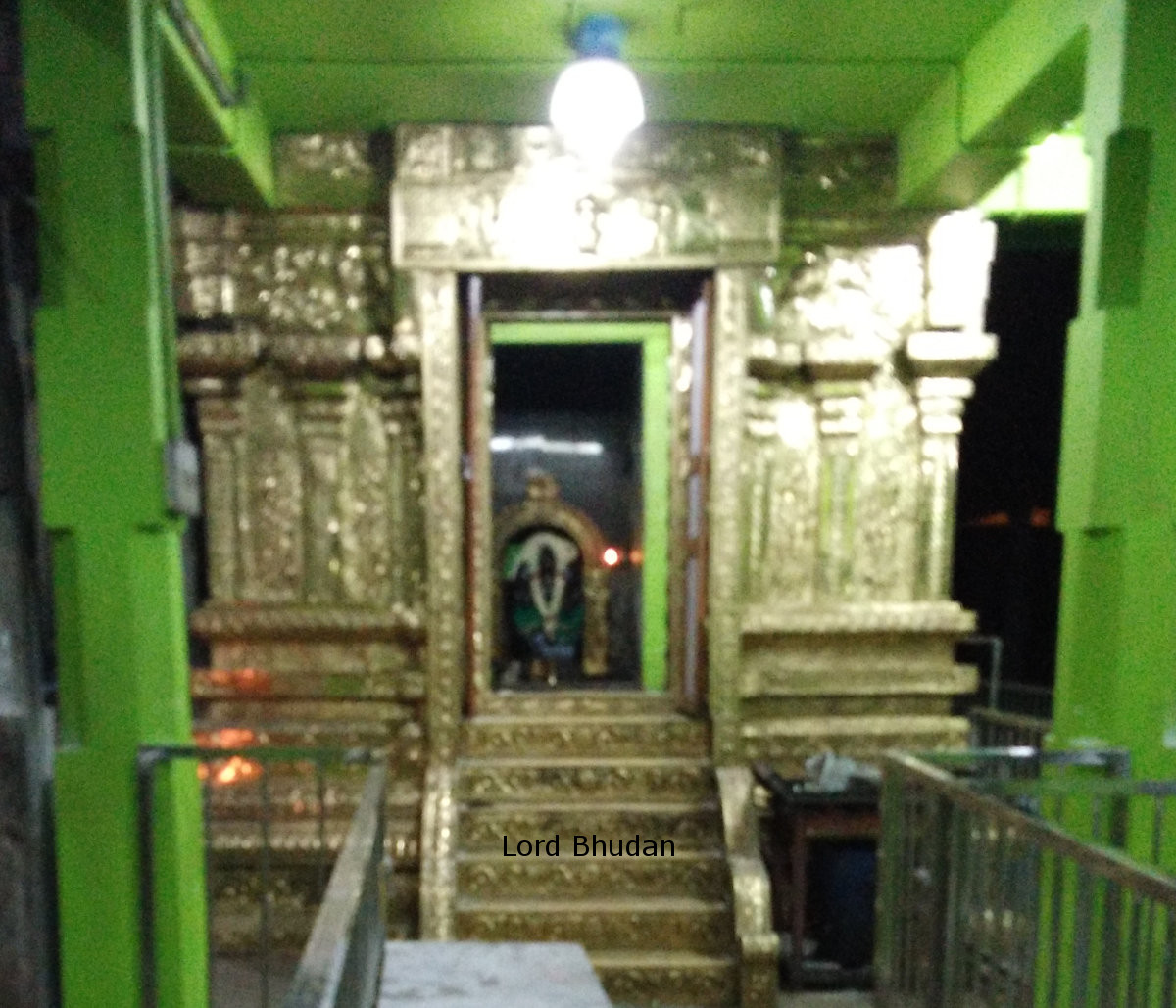 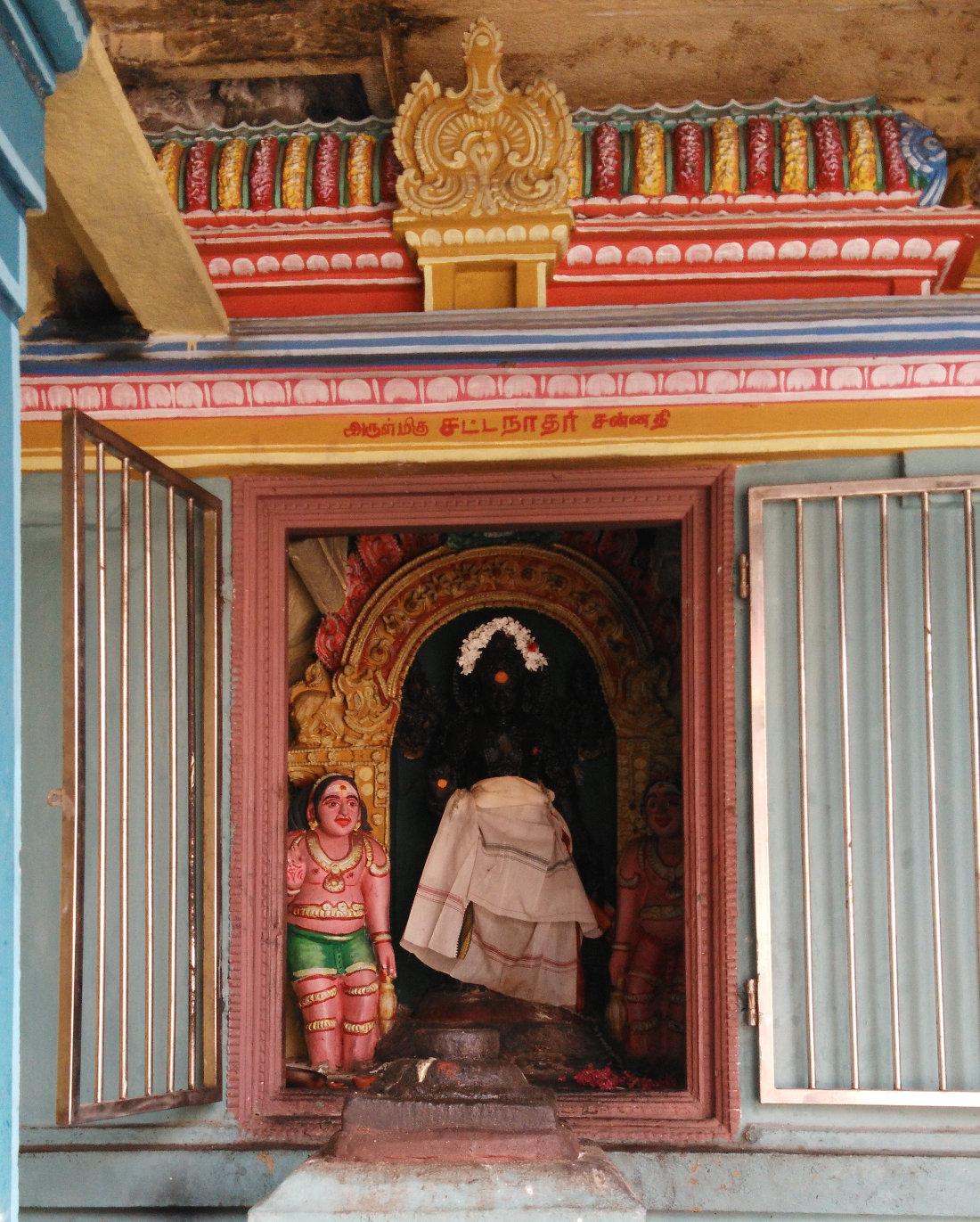 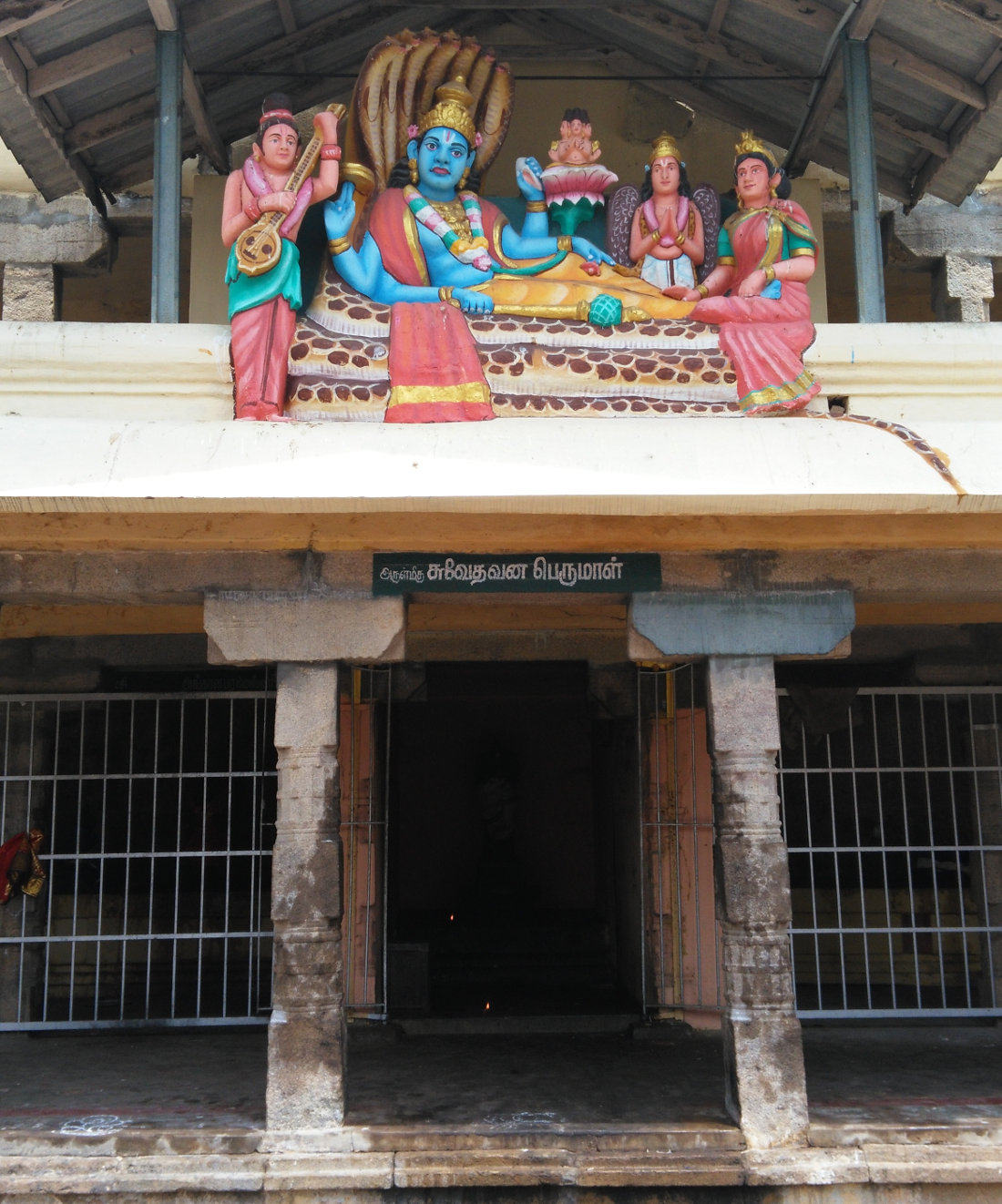 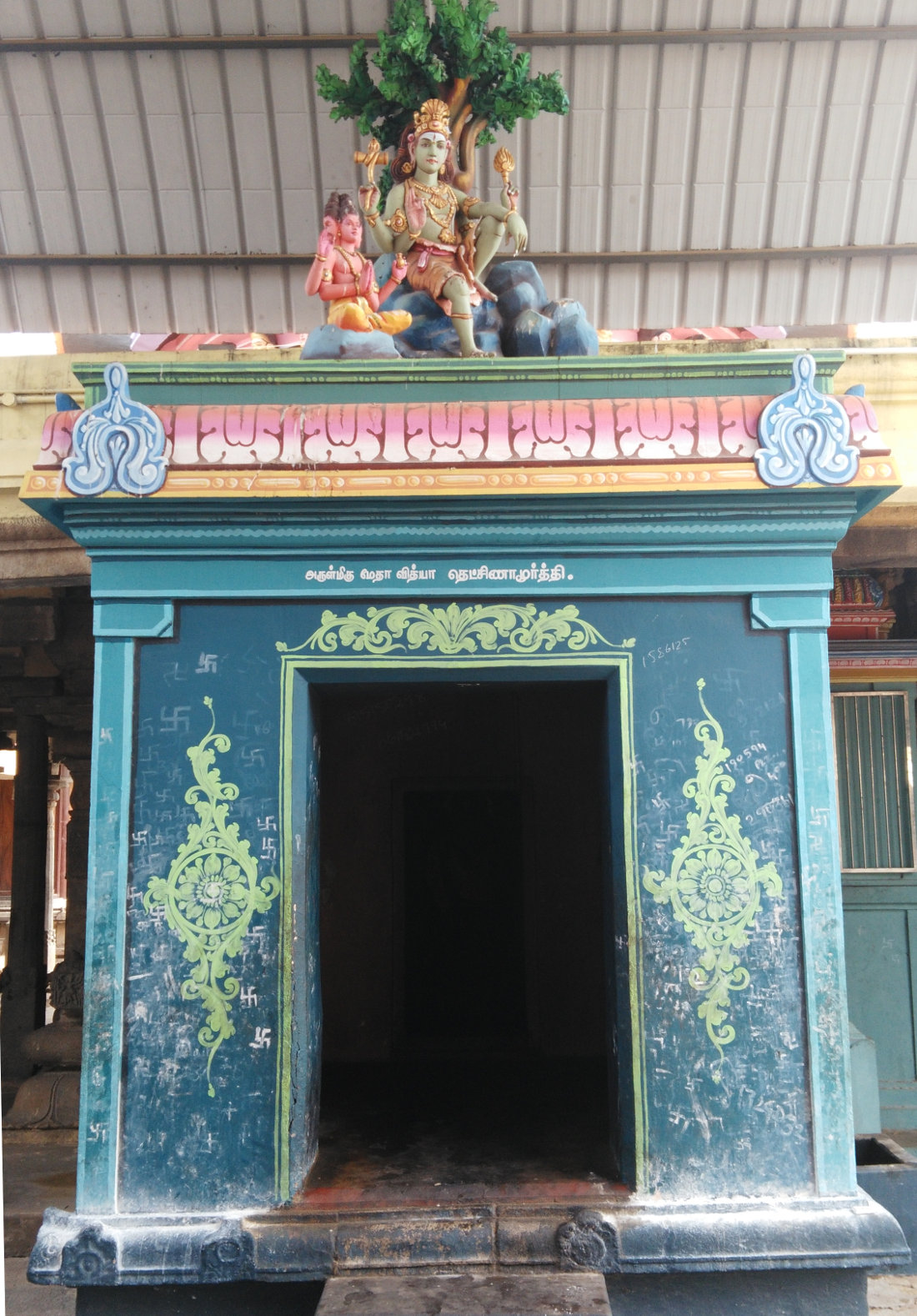 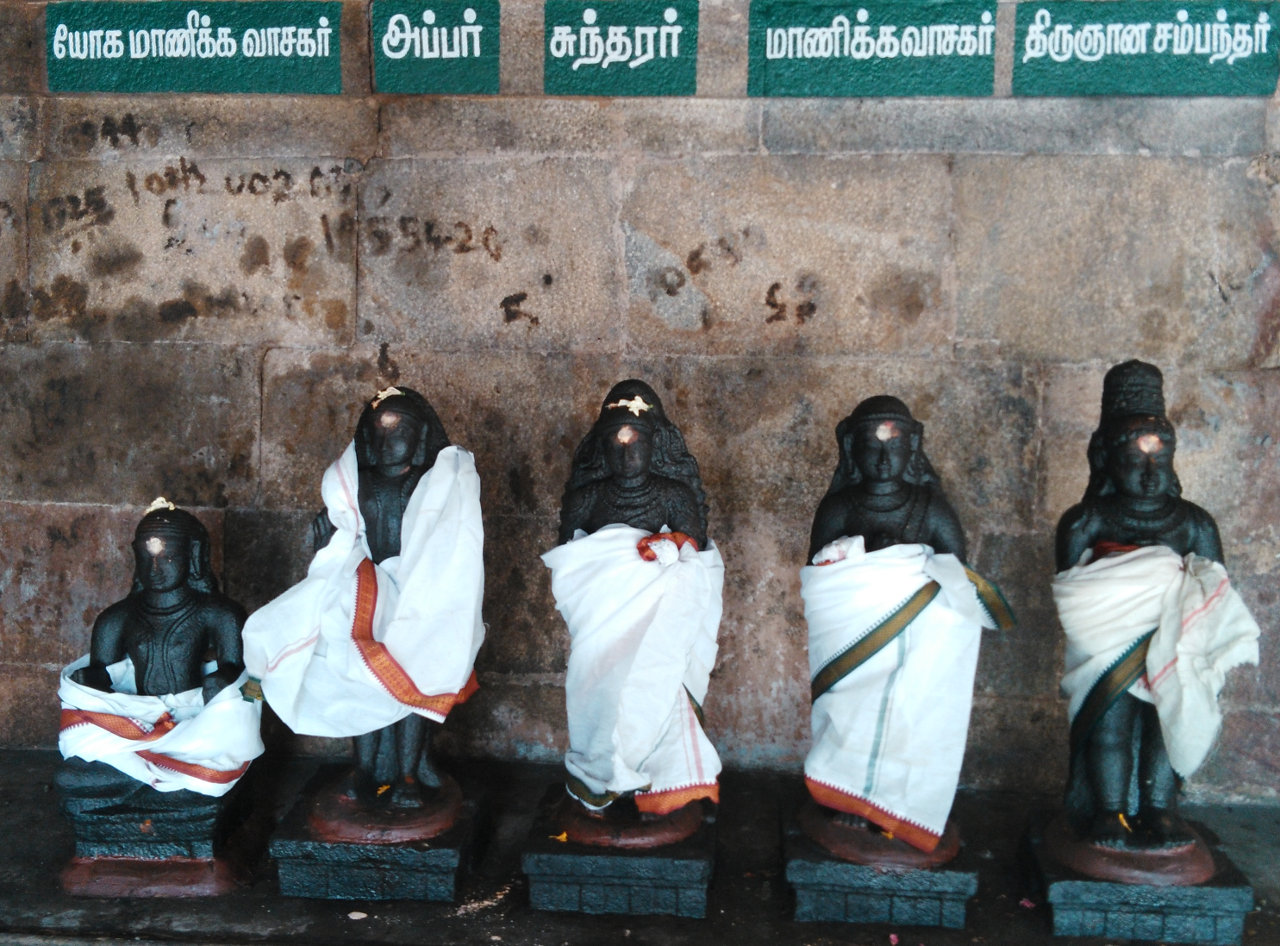 The significance of this temple is that there are -

This temple is very famous for Lord Budhan. It is one of the Navagraha temples. Lord Budhan’s shrine is situated to the left of Goddess Parvathy’s shrine.

Lord Budhan is the son of Lord Chandran. Lord Chandran’s shrine and Chandra Theertham are located just opposite to Lord Budhan’s shrine. A large number of devotees can always be seen in this shrine.

This temple is called “Aadhi (first) Chidambaram” because it is believed that Lord Shiva performed his dance here before performing it in Chidambaram.

Similar to Chidambaram, there is a shrine for Lord Vishnu near the Natarajar’s shrine. “Shiva Thandavam” festival is also celebrated here as in Chidambaram. The idol of Natarajar is very beautiful.

It is considered very auspicious to worship the lord here after taking a dip in all the three Theerthams. Devotees believe that by doing so they will be blessed with prosperity. It is also considered beneficial for the betterment of their children. In his hymn, Saint Thirugnanasambanthar also sang about the benefits of worshiping the lord here.

Special poojas called “Agorapoojai” are performed during midnight on the 3rd Sunday in the Tamil month of Karthigai (Nov-Dec) to Lord Agoramurthy. Worshiping the lord during this pooja is believed to be very auspicious.

Sri Vallabha Ganapathy (Sri Vallabha Devi with Sri Ganapathy) is housed in a shrine which looks like an old and traditional house. It is actually a granary for storing cereals and paddy. Worshiping this Vinayakar will lift one from the clutches of poverty. Since Lord Vinayakar can be seen along with his wife here, devotees believe that worshiping them will help in removing obstacles from marriage proposals. 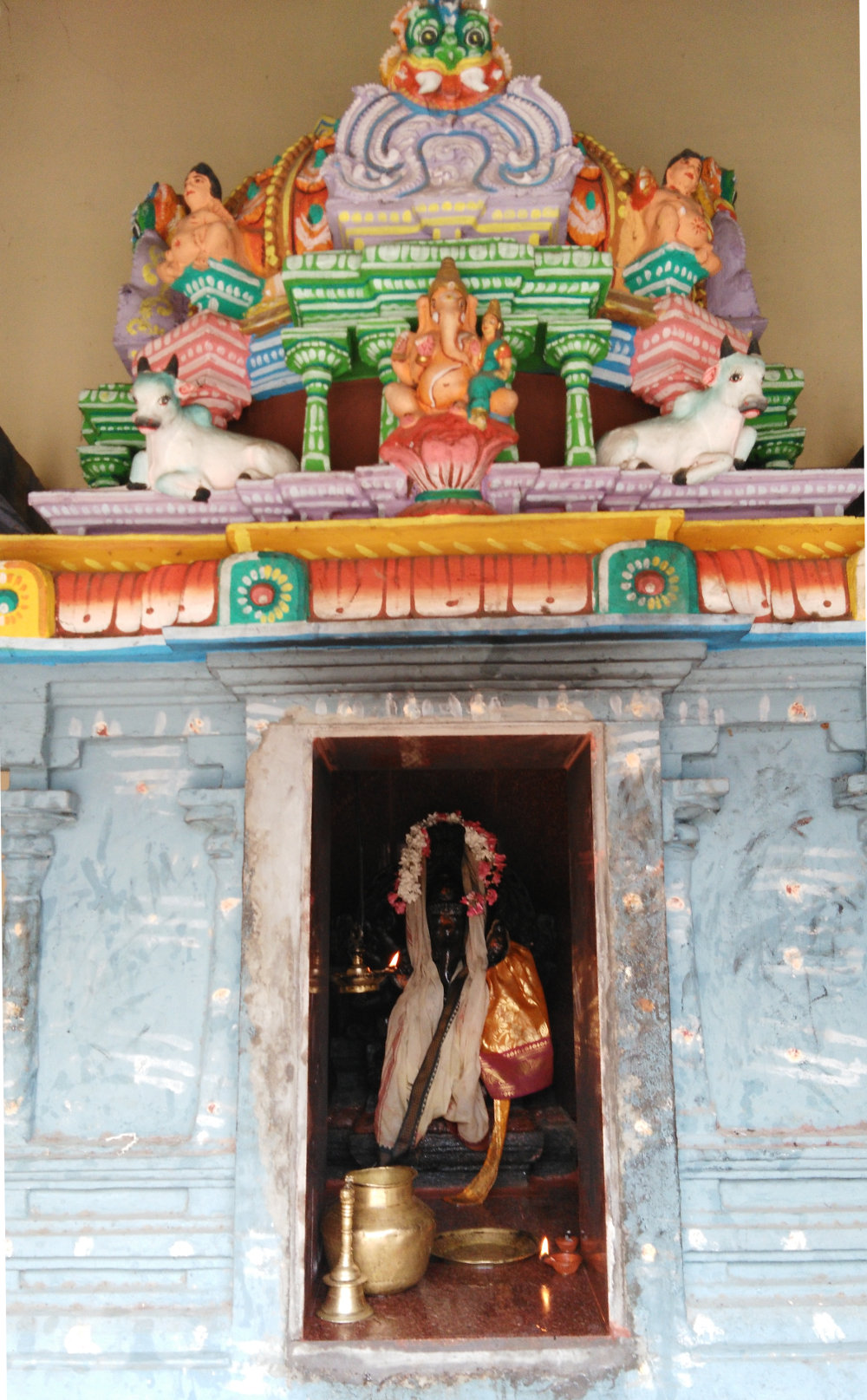 Goddess Durgai and Goddess Kaali are very famous here. Both these idols are very artistically carved.

This temple is considered to be significant for its three important attributes – Moorthy, Sthalam and Theertham - glory of Lord, sacredness of the land and the auspicious temple tanks.

In this temple, near the Chandra Theertham, there is an old and huge peepal (Vadavaal) tree. Under this tree Lord Shiva’s footprint (“Rudra Paadham) is placed similar to the “Vishnu Paadham” seen in Gaya. Performing ritual ceremonies like “srardh” and “dharpanam” here to the ancestors are considered to be very auspicious. A large number of people can be seen performing such ritual ceremonies here.

This is the birth place of Thiruvenkattu Nangai, wife of Saint Siruthonda Nayanar, one of the 63 Nayanmars.

This is a famous “Parihara sthalam” for Lord Budhan (Mercurry).

Those suffering from nerve related ailments can worship lord Budhan here for relief. Lord Budhan is believed to be the lord responsible for education and business. Hence, devotees believe that by worshiping lord Bhudan,they will be blessed with better education, knowledge, wisdom, oratory excellence and improvement in their businesses.

Devotees also believe that worshiping the lord here will lead to removal of sins accrued in their previous births.

It is believed that those seeking wedding boon and “santhana prapthi” (child boon) can pray to the lord here.

10-day Aadi Pooram in the Tamil month of Aadi (Jul-Aug),

Arudra Dharisanam in the Tamil month of Markazhi (Dec-Jan) and

“Laksharchanai” to Lord Agoramurthy in the Tamil month of Panguni (Mar-Apr).

Special poojas called “Agorapoojai” are performed during midnight on the third Sunday in the Tamil month of Karthigai (Nov-Dec) to Lord Agoramurthy,

There is a festival in the Tamil month of Vaikasi (May-June) to celebrate the incident of Iraavadham (Lord Indra’s white elephant) getting relief from his curse.

In the Tamil month of Aadi (Jul-Aug), there is a festival to celebrate the legend of Saint Pattinathar receiving “Shiva Deeksha” from Lord Shiva. 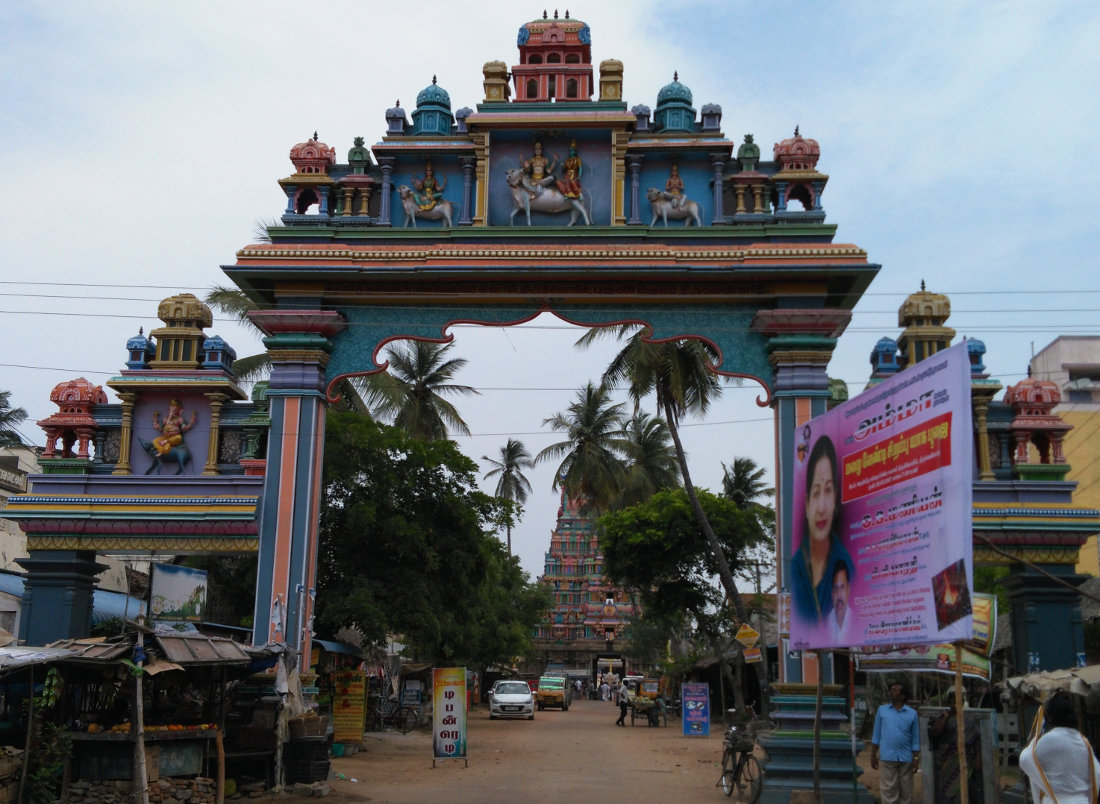