Kudanthai is now known as Kumbakonam. Kudanthai Karonam is the name of the temple that is located in the heart of Kumbakonam town. It is on the Chidambaram to Tanjure (via Mayiladuthurai) route. It is about 35 kms from Mayiladuthurai. Kumbakonam has a railway station and this temple is about 2 kms away from the station.

Kumbakonam, popularly known as the “temple city”, is located on the banks of the river Cauveri. Cauvery and Arasalaru rivers flow in such a manner that they look like garlands adorning this place.

There are two nearby temples in this city - Sri Kasi Viswanathar temple and Sri Someswarar temple. Both the temples’ authorities claim that their temple is the Paadal Petra Sthalam where Saint Thirugnanasambanthar rendered his Pathigam. The saint ends each of the stanza with the word “Karonathare”. Incidentally, both these temples have a legend associated with “Karonam”.

However, in the 7th stanza of his hymn, the saint referred to the Goddess as “Sri Thenar Mozhiyaar”. This is the name of the goddess at Sri Someswarar temple. 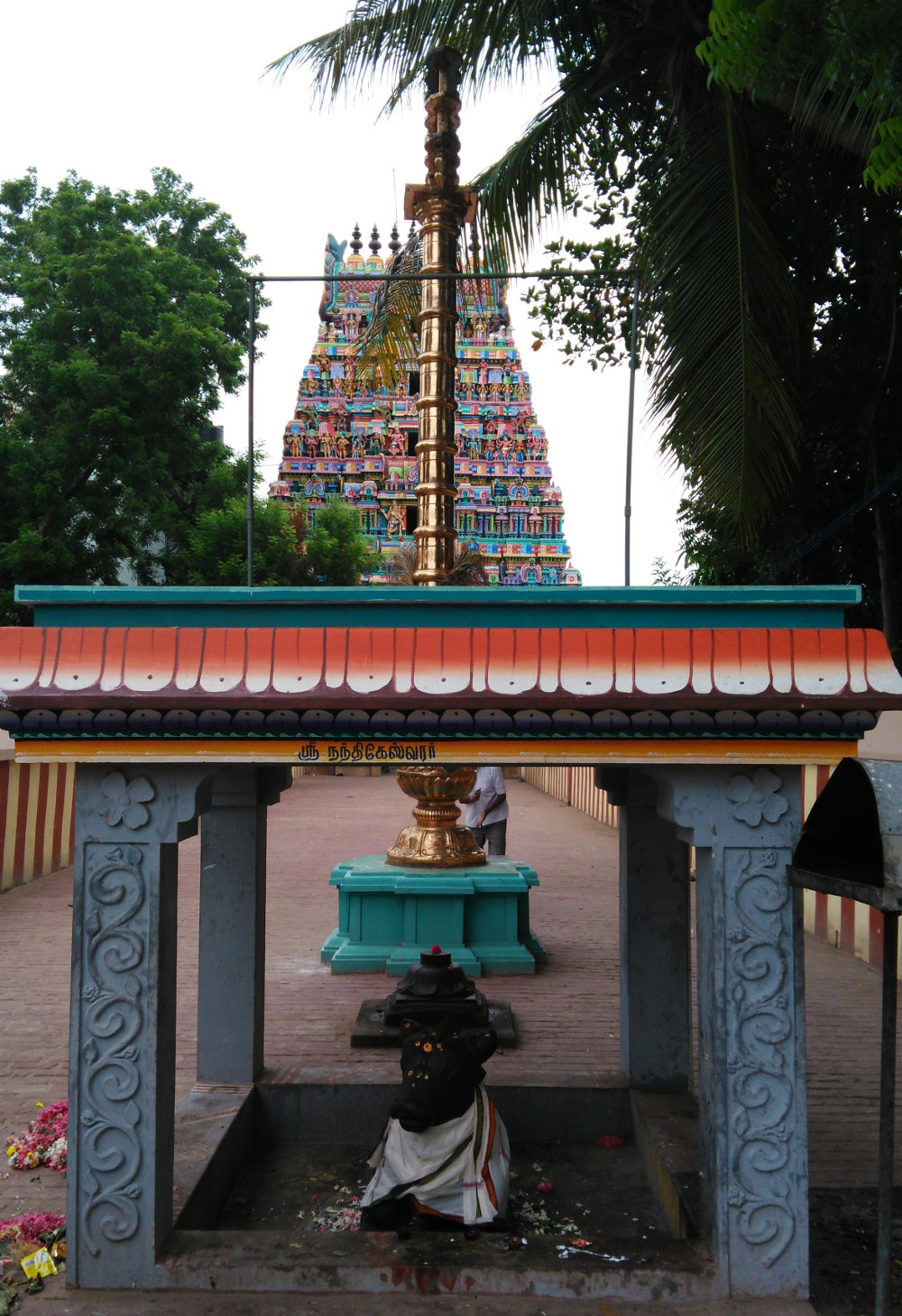 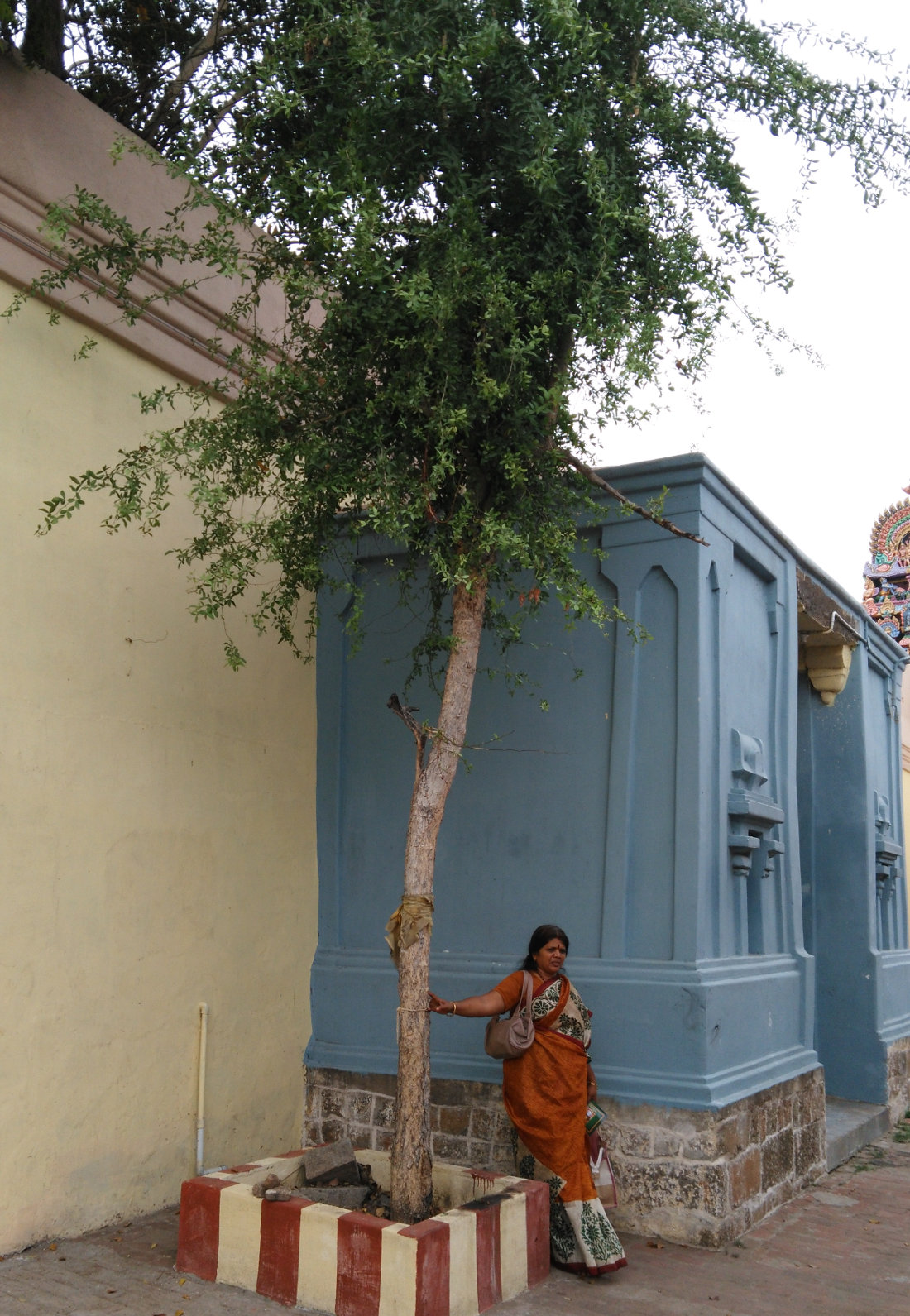 This temple is on the eastern side of the famous “Potramarai Kulam” (tank) and next to the famous Vaishnava shrine, Sri Sarankapani temple.

As per legend, it is believed that when the “Nava Kannikas” came to Mahaamaha tank to take a dip, there was a lot of noise and chaos. Goddess Parvathy embraced Lord Shiva (in the form of Arokanam) in fear. Hence this place gets the name “Kaya Arokanam” (“Kayam” means body and “Arokanam” means embraced) and the lord is known as “Sri Kayarokanar”. “Kaya Arokanam” has now changed to Karonam.

Planet Jupitar (Guru/ Viyazhan) and Lord Chandran (moon) are believed to have worshiped the lord here. Chandran is also known as “Soman”, hence this place gets the name “Somesam” and the lord is praised as “Sri Viyazha Someswarar”.

It is also believed that Chola King Paranthakan visited this place, installed a Shivalingam and worshiped it to seek the lord’s blessing for “santhana prapthi” (child boon). The lingam installed by him is known as “Sri Chozheesar” (derived from Chola).

Procession idols of Natarajar with Sivakami and Somaskandhar are placed in the hall in front of the sanctum.

There is also a separate shrine for Saint Thirugnanasambanthar near Goddess Parvathy’s shrine.

In the “koshtam” (place surrounding the sanctum sanctorum), idols of Vinayakar, Dakshinamurthy, Arthanareeswarar, Brahma, Durgai and Chandikeswarar can be seen. 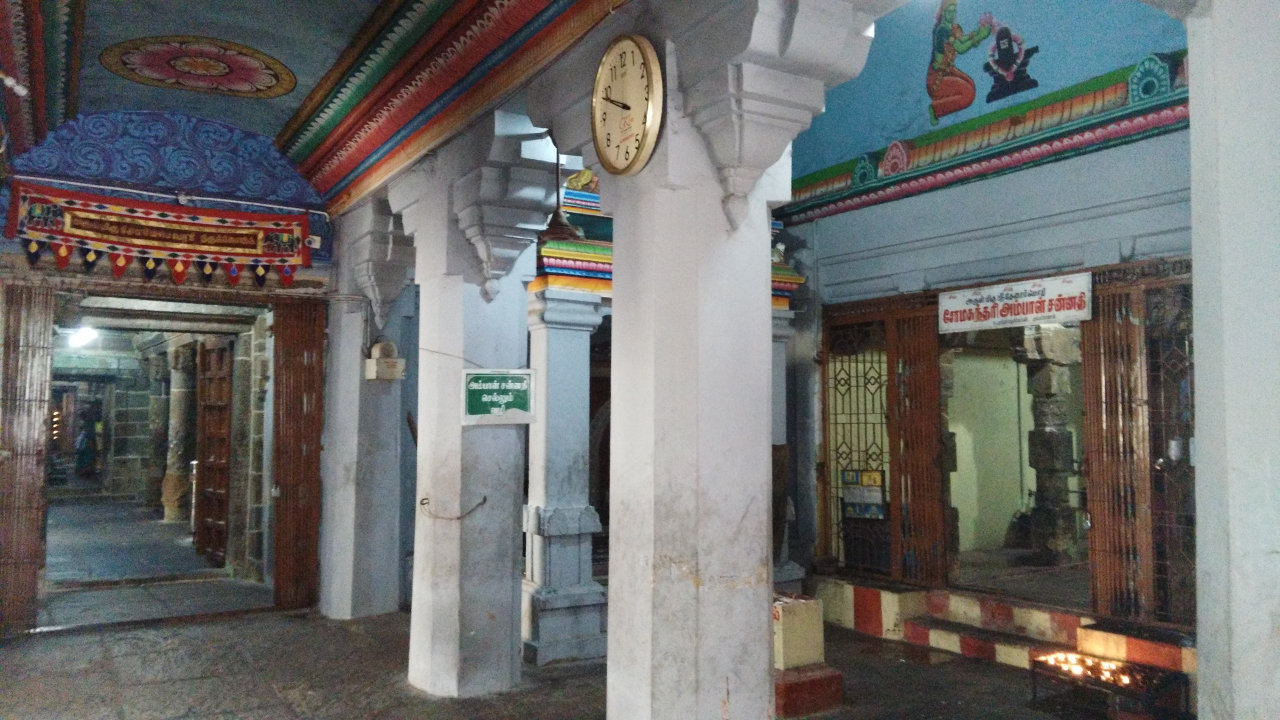 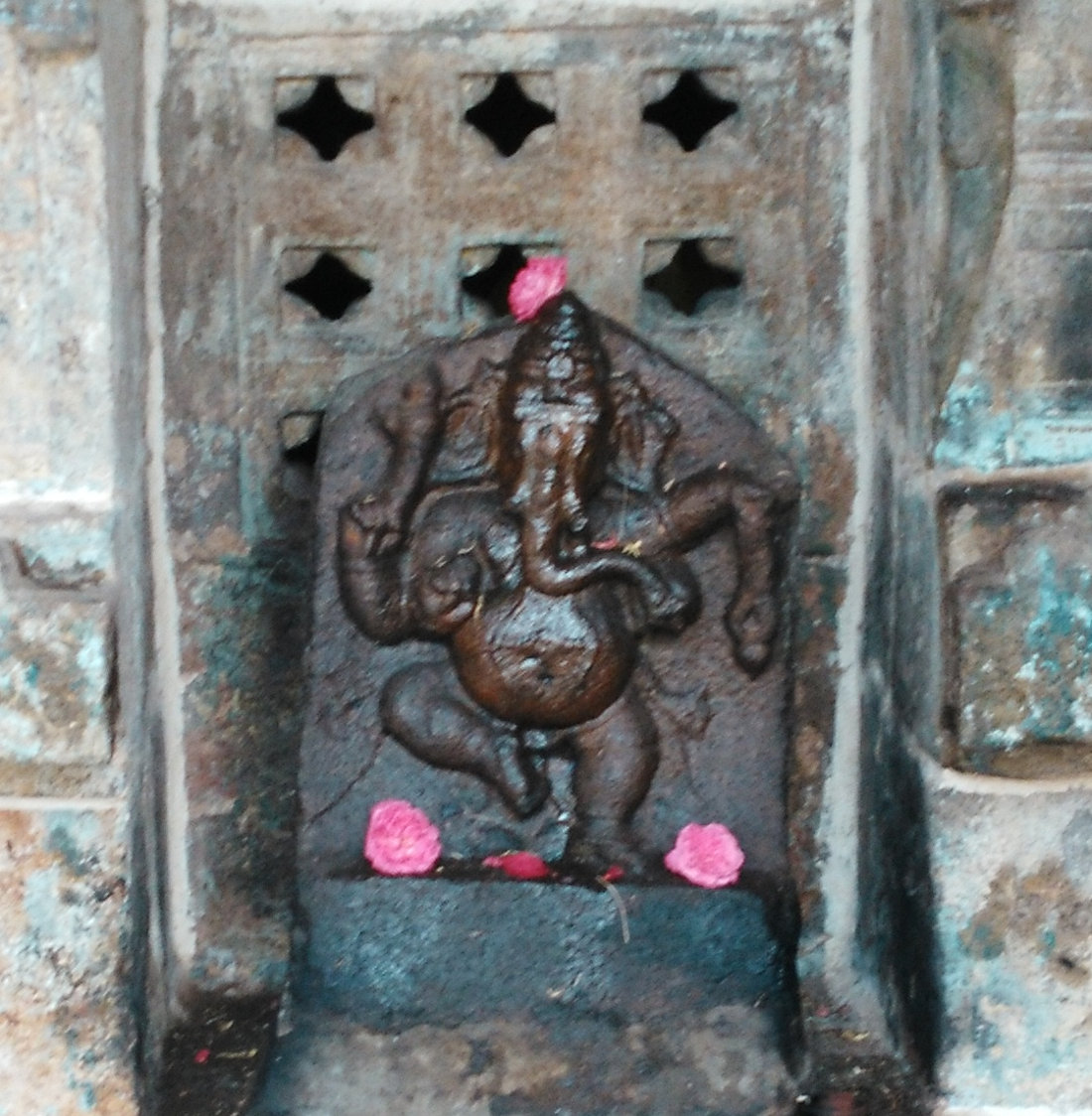 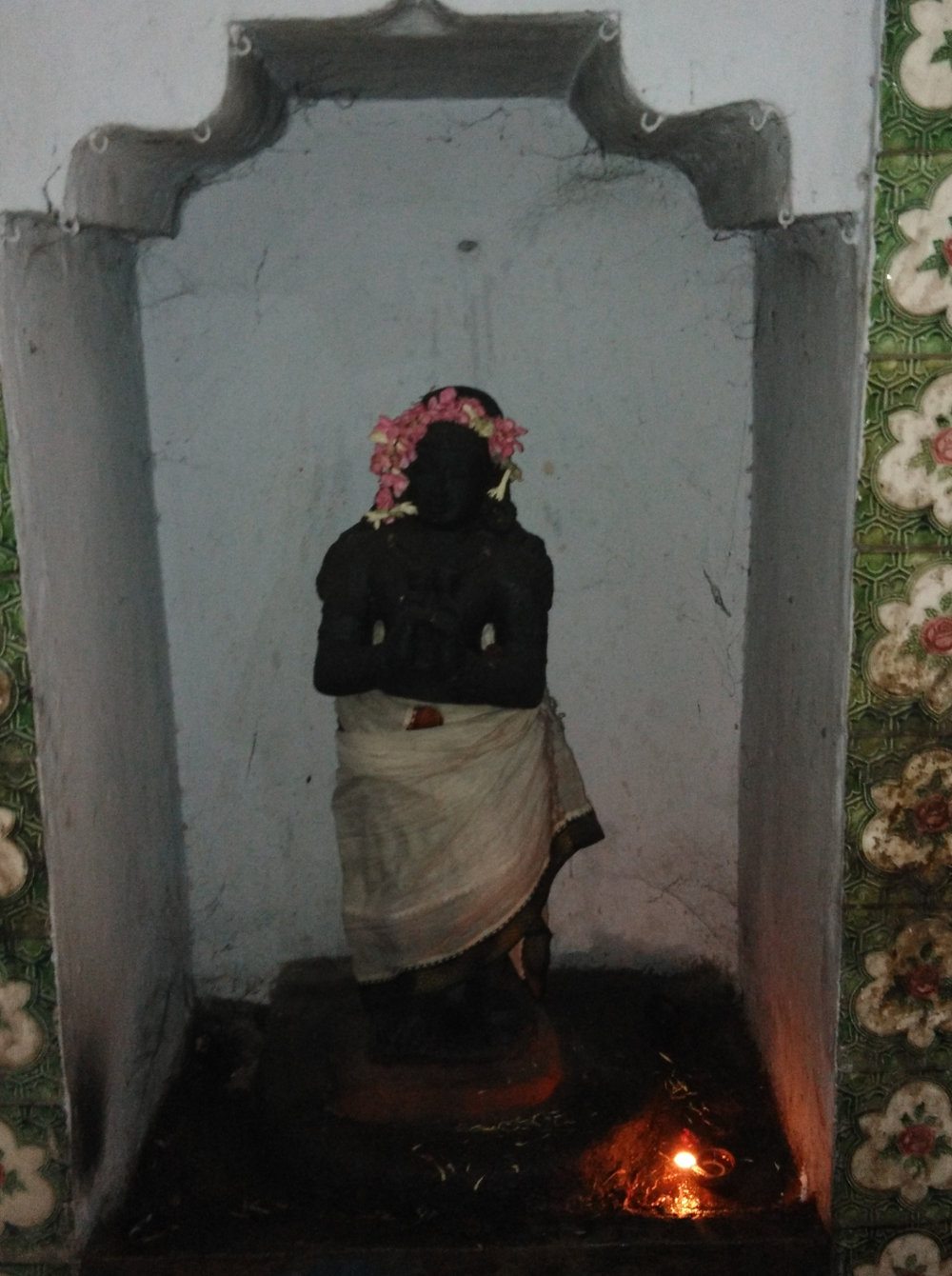 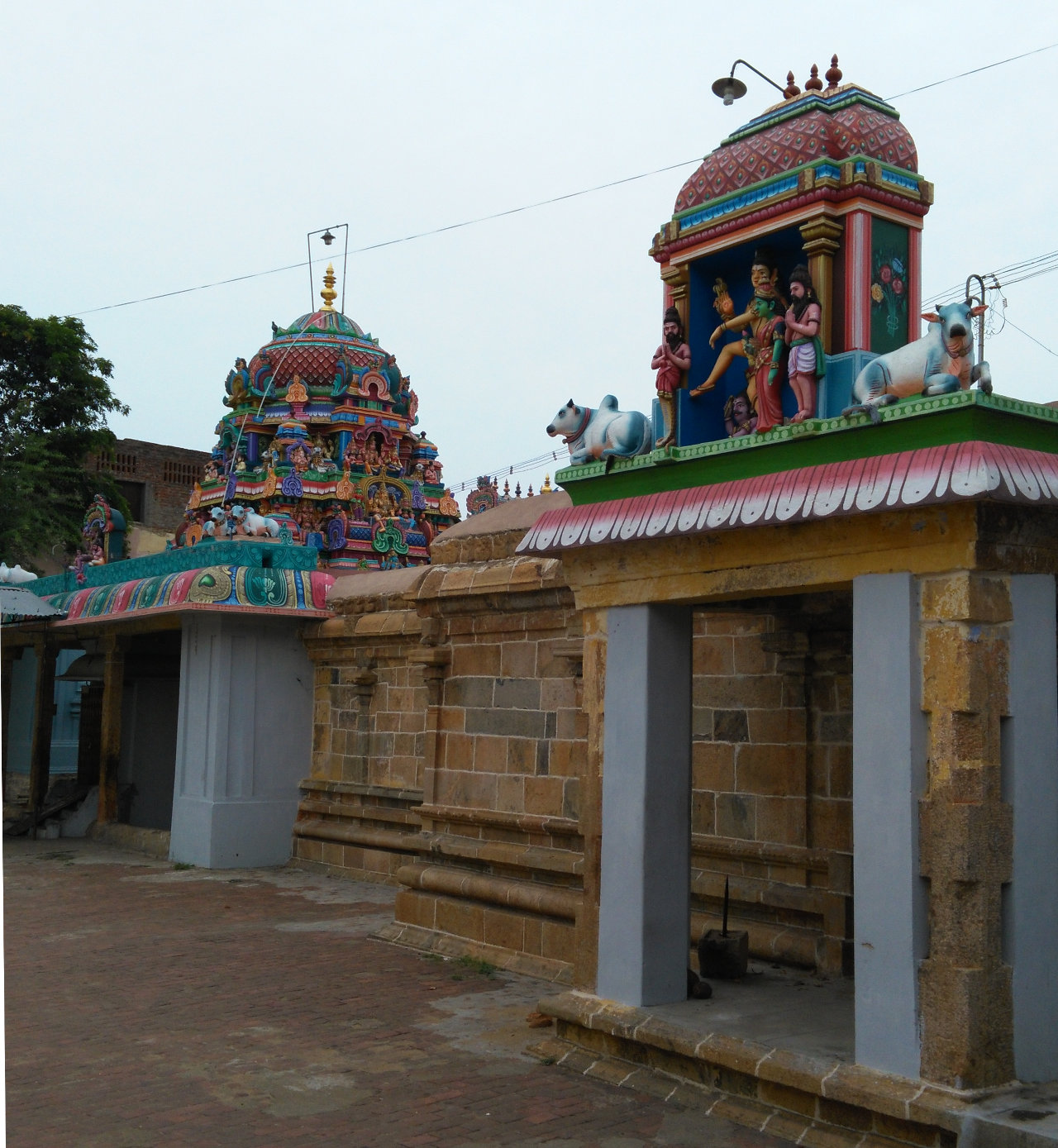 The huge Mahamaha tank covers of an area of about 6 acres and it has 16 entrances. At each entrance, there is a shrine for Lord Shiva. These shrines are collectively called “Sodasa Mahalingaswamy” (“Sodasam means 16 in Tamil). The names of these 16 Shivalingams are –

Mahamaha Theertham is known as -

Mukthi Theertham in “Thuvabarayugam” and

The idol of Lord Murugan is unique here. He can be seen with six faces, seated on his peacock mount and wearing footwear (“Padarakshai”). Another significance in this shrine is that every month on Karthikai day, “Sataari” (crown) is placed on the devotees’ head similar to the practise in Vaishnava temples.

It is believed that in the year 1964, 100 devotees undertook the task of writing the five holy letters (“Panchakshra Mantra” - “Sivaya Nama”) one lakh time each thus making a total of one crore. They bound each such book and preserved it in a box which can be seen even now. 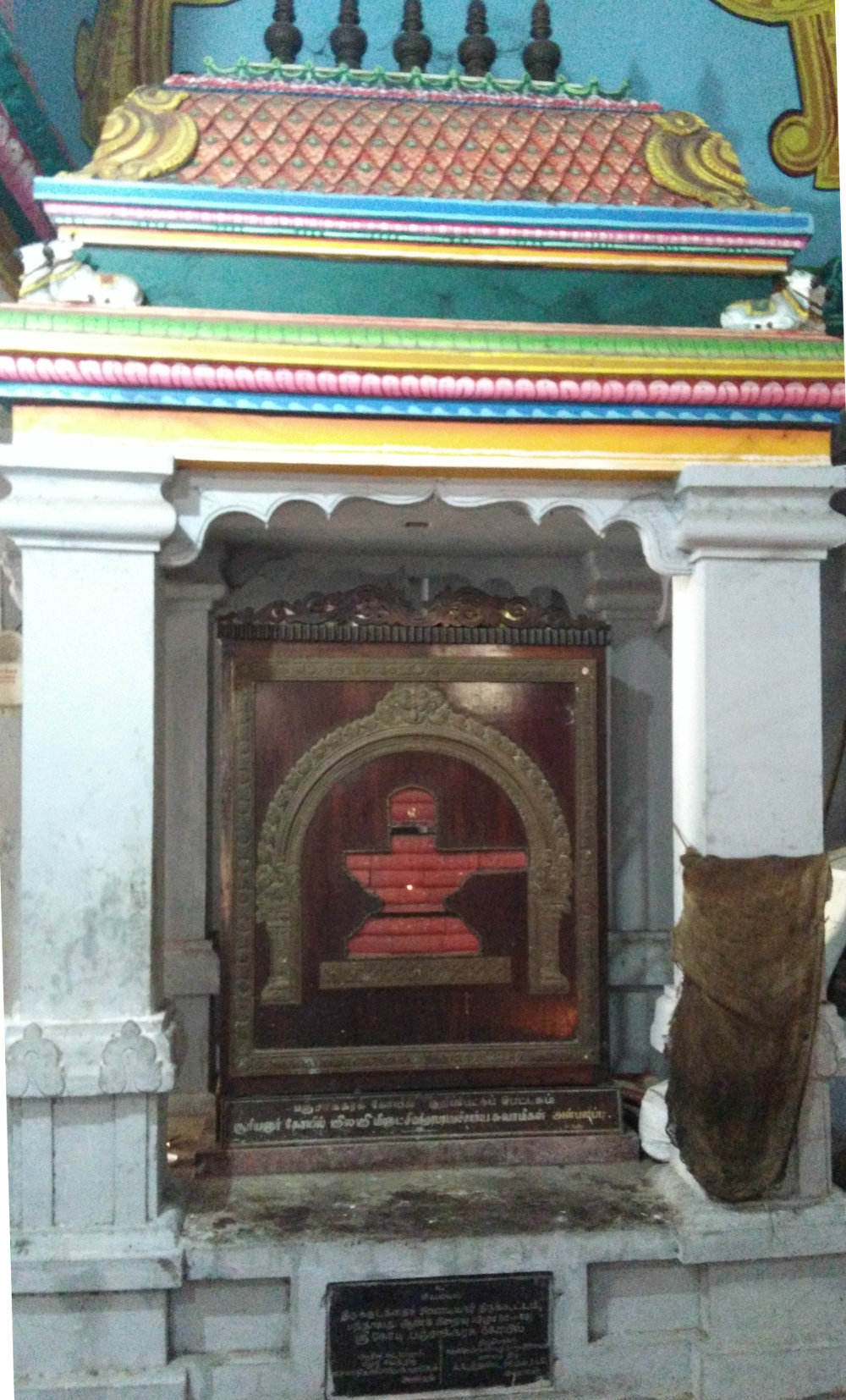 The architecture and the beautiful sculptures in this temple highlight the excellence of the Dravidian school of architecture that flourished during the Chola period (13th century).

Devotees pray to Lord Kalyana Vinayakar in this temple for 11 consecutive Mondays in order to seek the lord’s blessings and remove obstacles from their marriage proposals.

Almost all festivals related to Shiva temples are celebrated here. 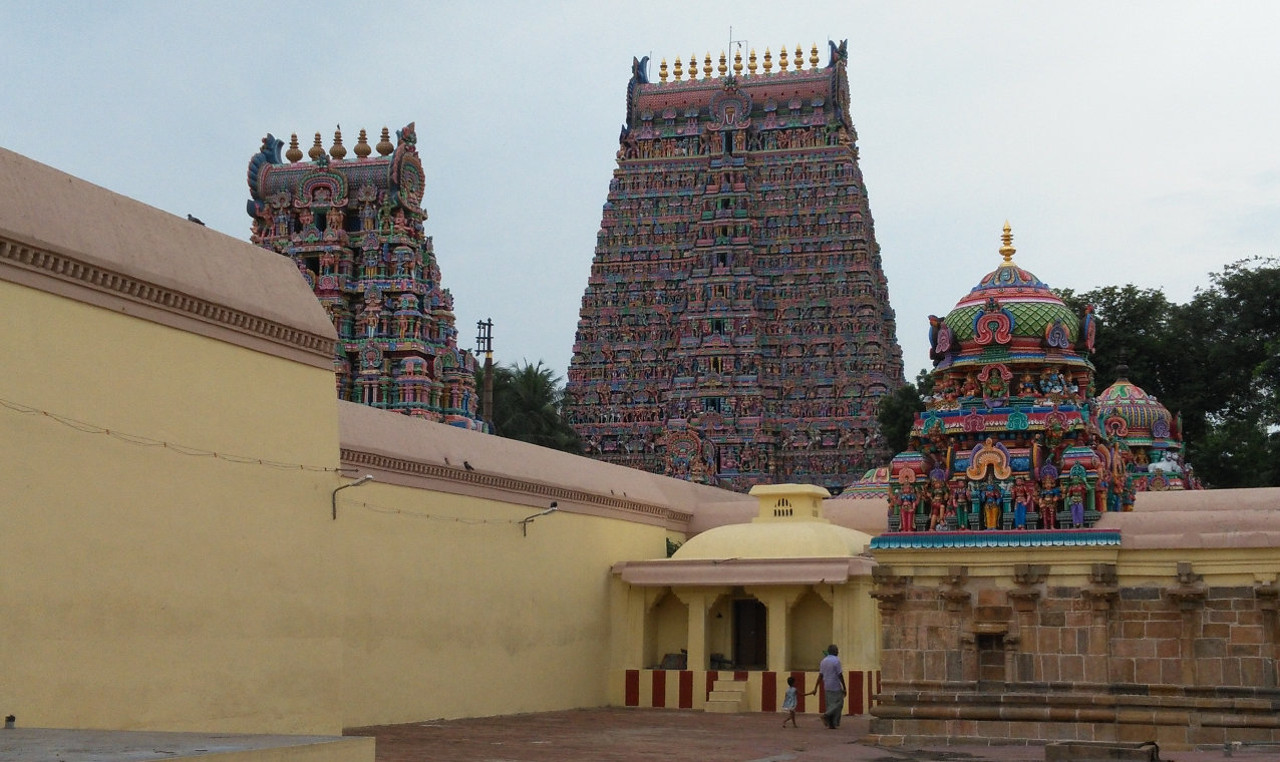 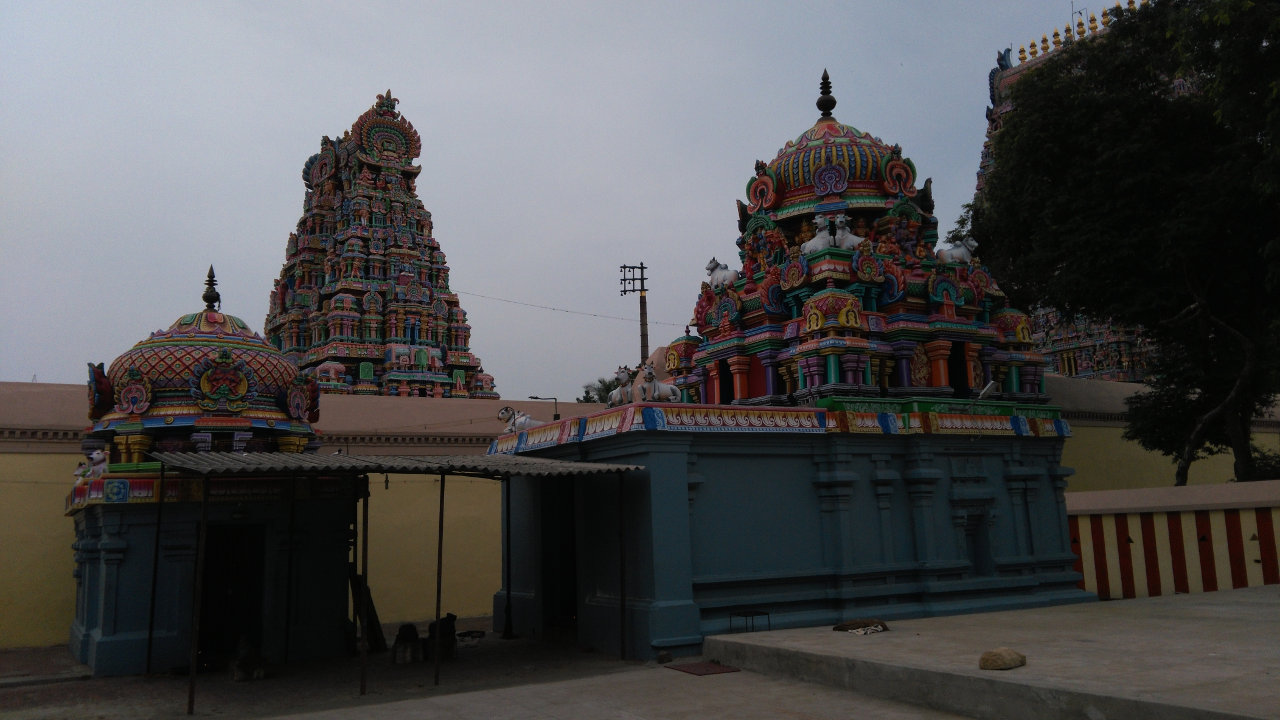 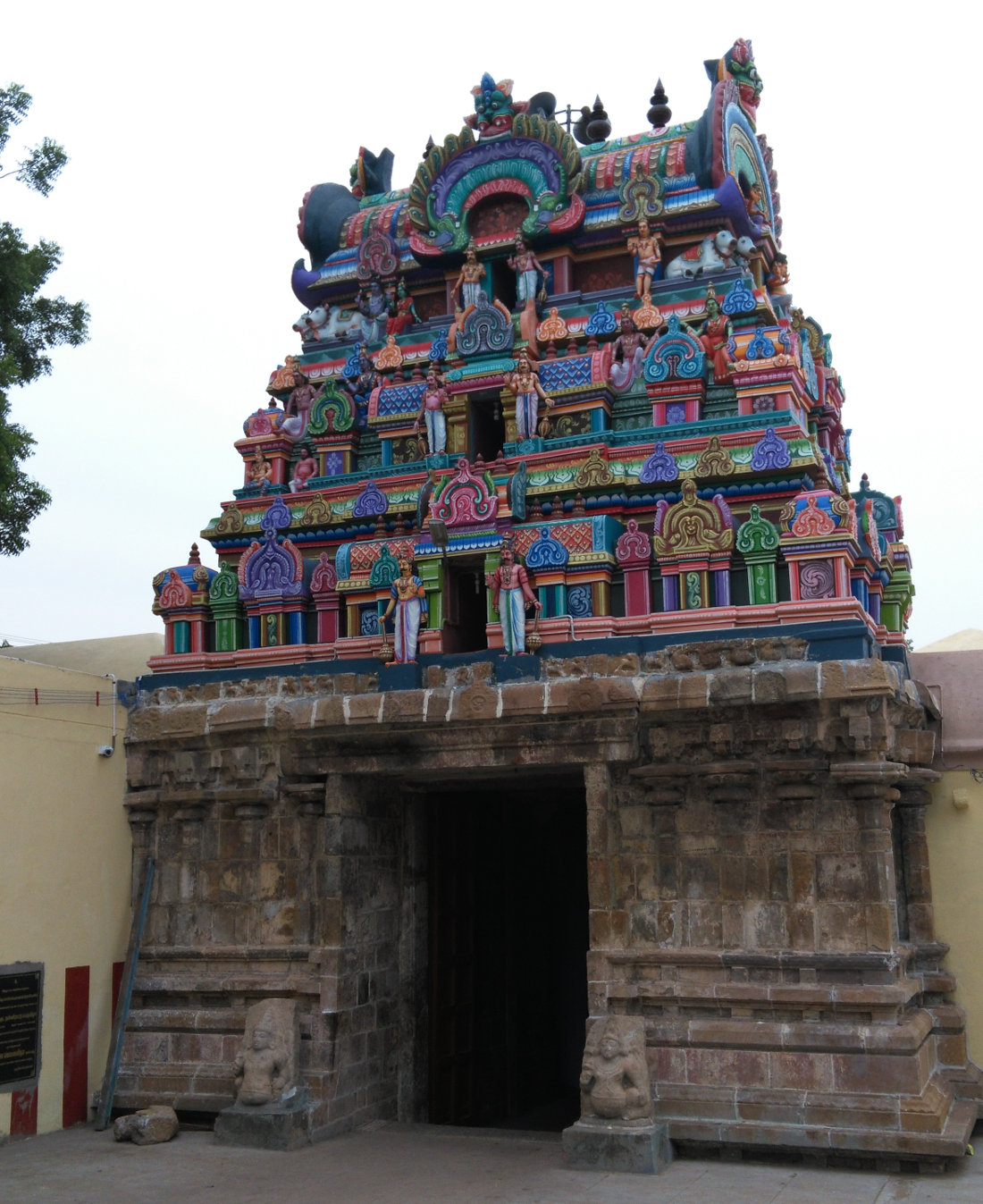 This north facing temple is on situated on the northern side of the famous “Mahaamaha Kulam” (tank).

According to legend, Lord Ram was advised by Sage Agasthiyar to worship Lord Shiva here to acquire the traits of “Rudramsam” (Rudra meaning anger) before waging a war against the demon Ravana. As Lord Ram received the blessing of “Aarokanam” (fulfilment of every desire), this place gets the name Arokanam which has later been changed to “Karonam”.

Another legend is that all the nine revered rivers (Kaveri, Ganga, Yamuna, Narmadha, Saraswathi, Godhavari, Dhungabatra, Krishna and Sarayu) went to Lord Shiva and requested him to cleanse them since a large number of people took dips in them to get relieved from their sins. It is believed that Lord Shiva took them first to “Panchakurosa Sthalams” for taking a dip in the holy water and then brought them to this place. Here they were advised to take a dip in the “Mahamaha Kulam” on a Mahamaham day in order to be cleansed of their sins. It is believed that all the nine rivers accompanied Lord Shiva in the form of angels (Navakanniyars). It is also believed that thereafter Lord Shiva and Goddess Parvathy appeared before them in the form of Kasi Viswanathar and Visalakshi and stayed back in this temple. 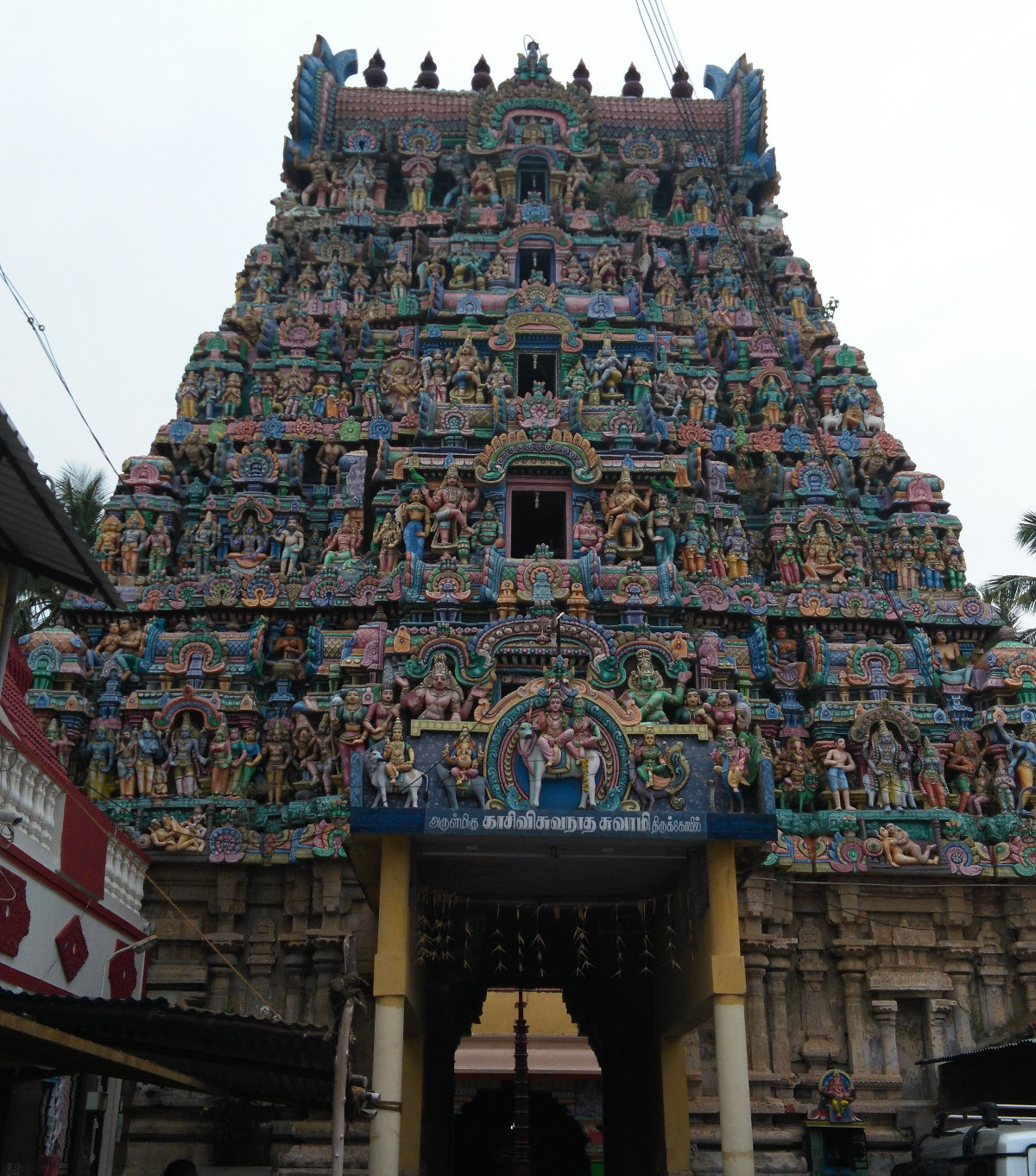 Beautiful idols for all the 9 rivers can be seen in this temple.

The Shivalingam installed and worshiped by Lord Ram is known as “Kshetra Mahalingam” and this can be seen in the outer corridor. 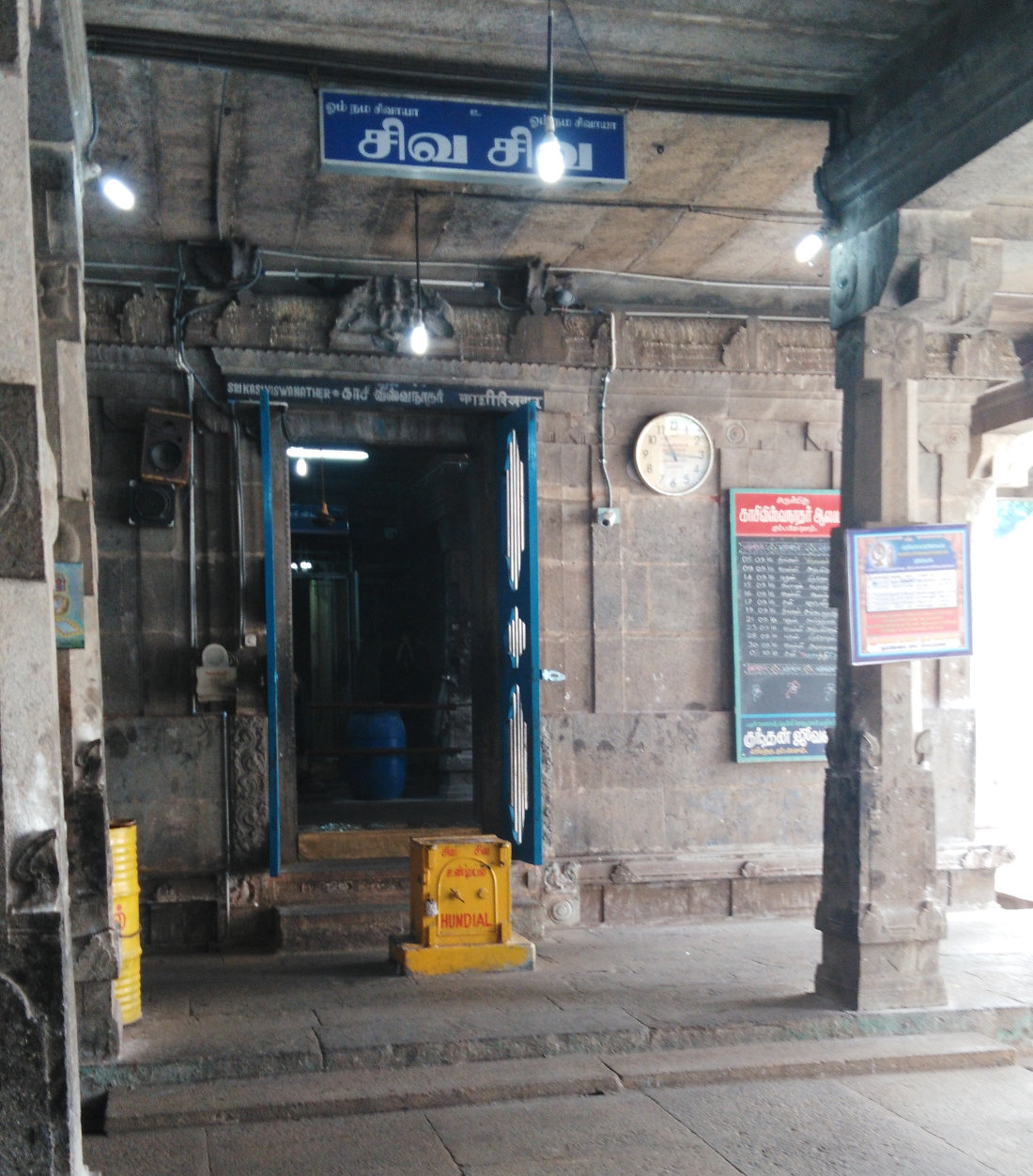 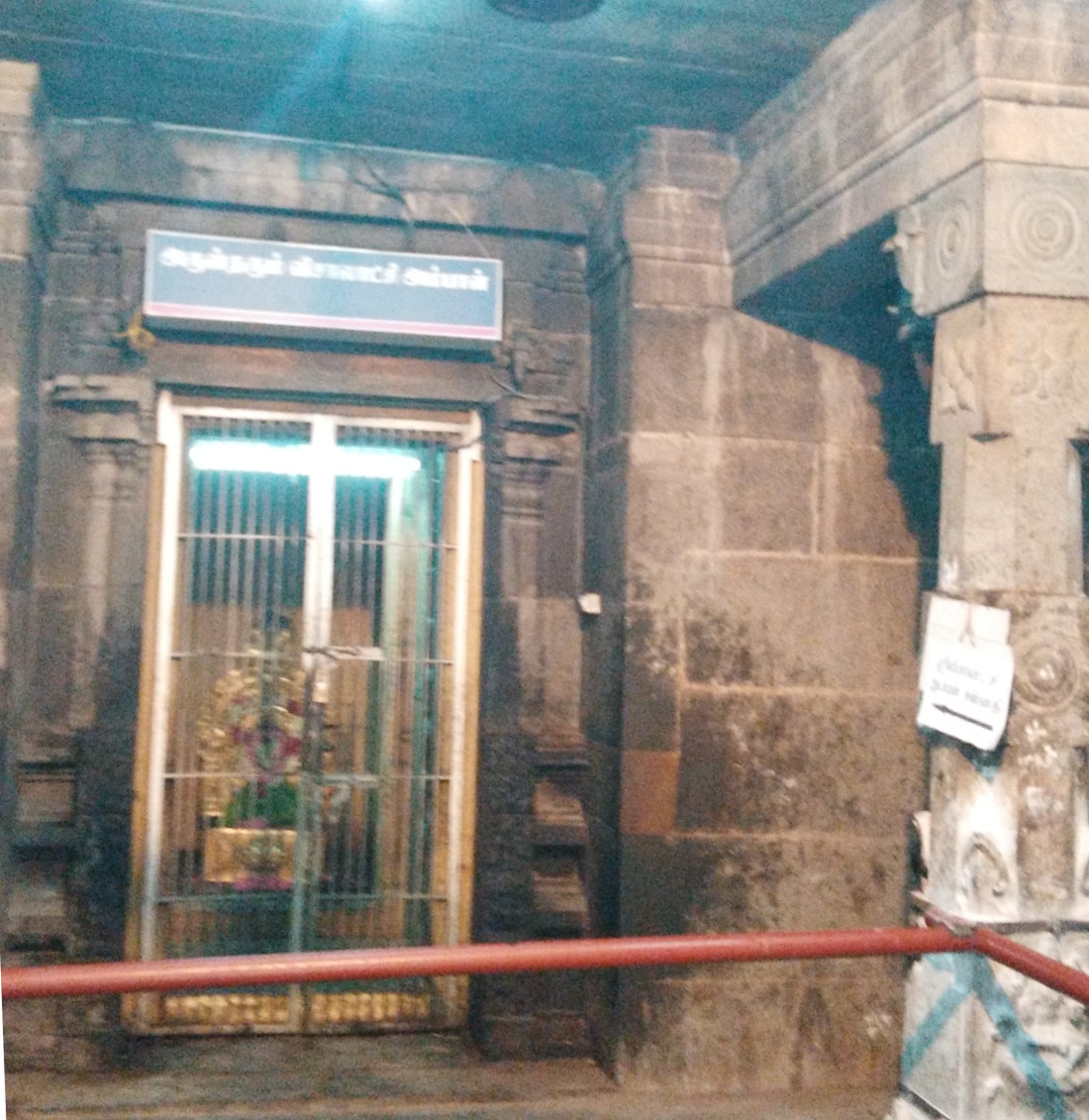 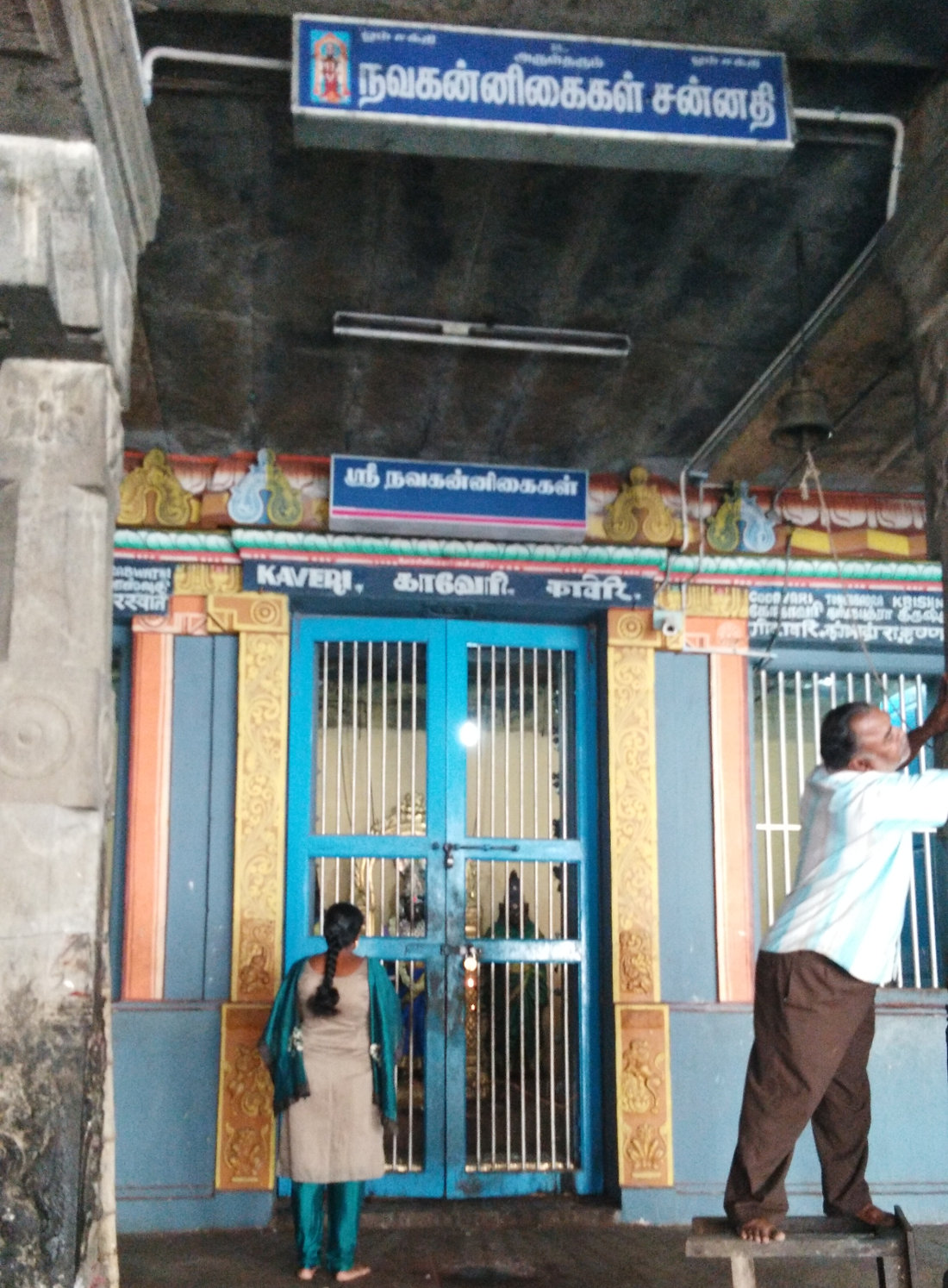 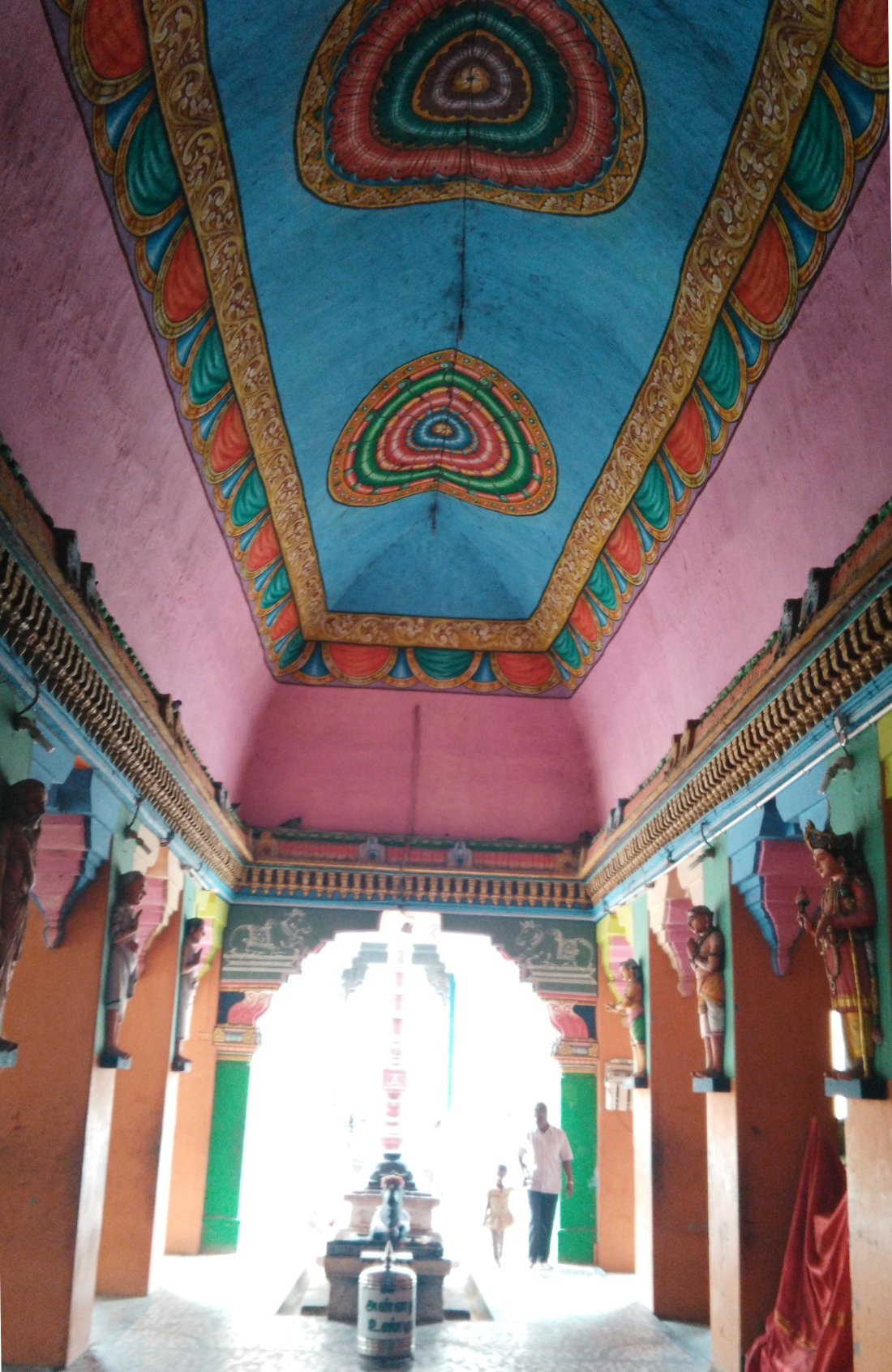 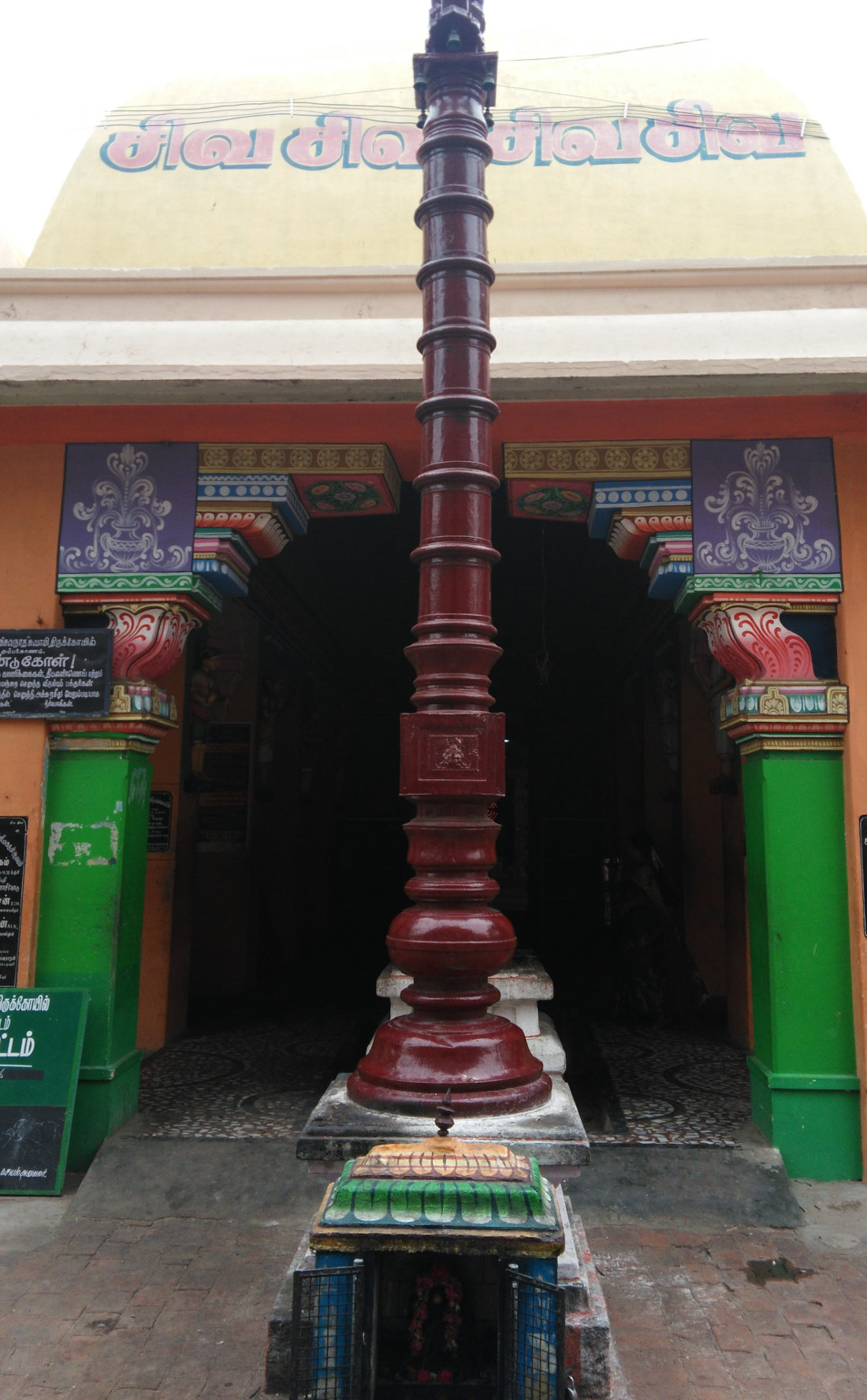 Lord Shiva in this temple is a Swayambumurthi (self-manifested).

The significance feature of this temple is that a Shivalingam is installed under a Neem tree.

This temple has 2 corridors and its main tower (Rajagopuram) has 5-tiers. Before the main tower, there is a beautiful arch with the sculptures depicting Lord Shiva accompanying the nine angels to the Mahaamaham tank.

This temple is also popularly known as “Nava Kannigaikal” temple.

It is believed that those seeking “Santhana Prapthi” (child boon) can pray to the lord here.

Devotees believe that by worshiping the lord here, obstacles from their marriage proposals will be removed and they will also be absolved of the sins of their previous birth.

Almost all festivals related to Shiva temples are celebrated in this temple.