According to legend, in ancient times, this region was a forest densely covered with Punga trees. Hence this place gets the name Thiruppungur.

There are 5 stone inscriptions available here which date back to the period of Pallava Kings Sakalabhuvana and Kopperunsinga Devar. As per these inscriptions, this temple was renovated by these two kings.

The historical name of this place is “Karinchaaranyam” and the lord is praised as “Sri Sivalokamudaya Nayanar”. 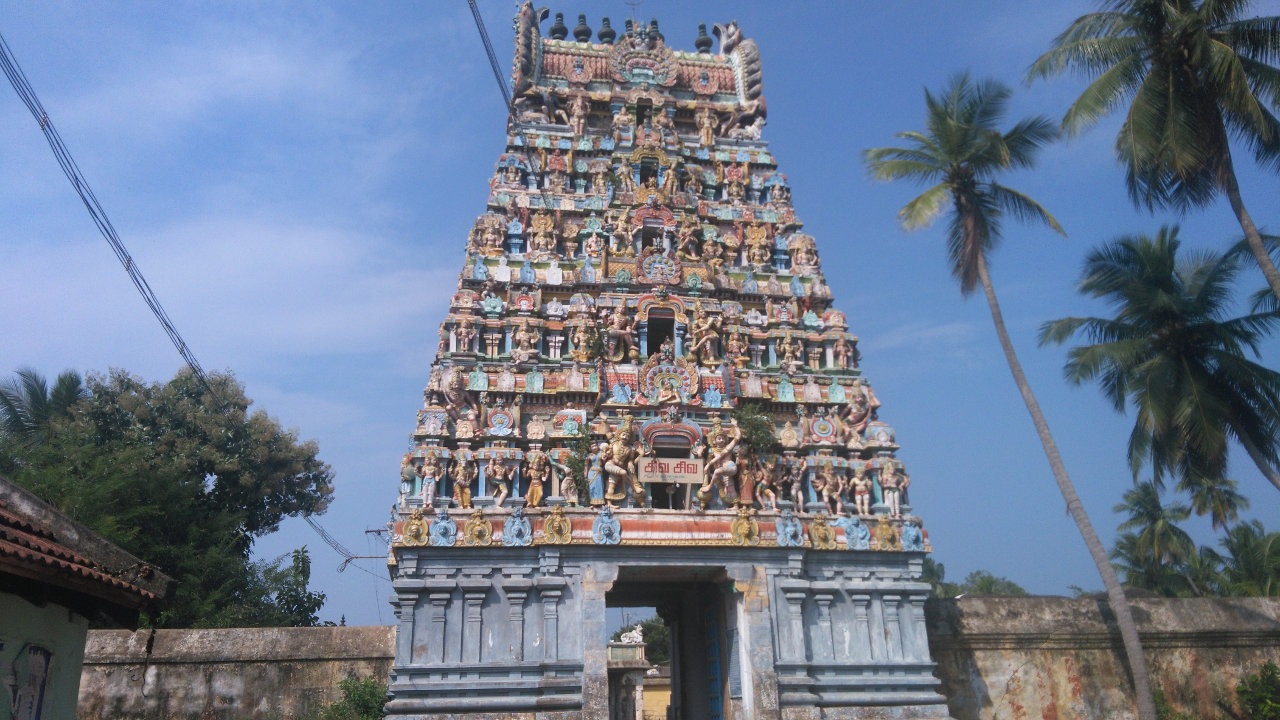 It is believed that Saint Agasthiyar got the wedding dharshan of Lord Shiva here.

According to legend, Nanthanar, an ardent devotee of Lord Shiva, was born in Mela Adhanur village on the banks of the river Kollidam in a backward community. Though he was working as a peasant in a farm, he used to devote most of his time in the worship of Lord Shiva. He was very keen to worship Lord Shiva at the famous Chidambaram (Nataraja) temple and waited for an opportunity to go there. However, he could not get permission from his employer who kept stalling Nandanar’s request. Whenever anyone asked him about his trip, he used to say that “he would go tomorrow”. This earned him the nick name of “Thiru Nalai Povaar” – meaning “one who would go tomorrow”.

Noticing his eagerness, one day his employer finally granted him permission to go to Chidambaram. Nanthanar came to Thiruppungur en route Chidambaram. In those days, people from backward community were not allowed to enter into temples and hadto worship the lord from the outside. However, in this temple, the Nandhi in front of the lord was so big that he could not see the lord. He then prayed to Lord Shiva to allow him to get his darshan. It is believed that Lord Shiva directed Nandhi to step aside to allow Nanthanar to see him fully without any hindrance. Nandhi obeyed immediately and the ecstatic Nanthanar got a full darshan of Lord Shiva. 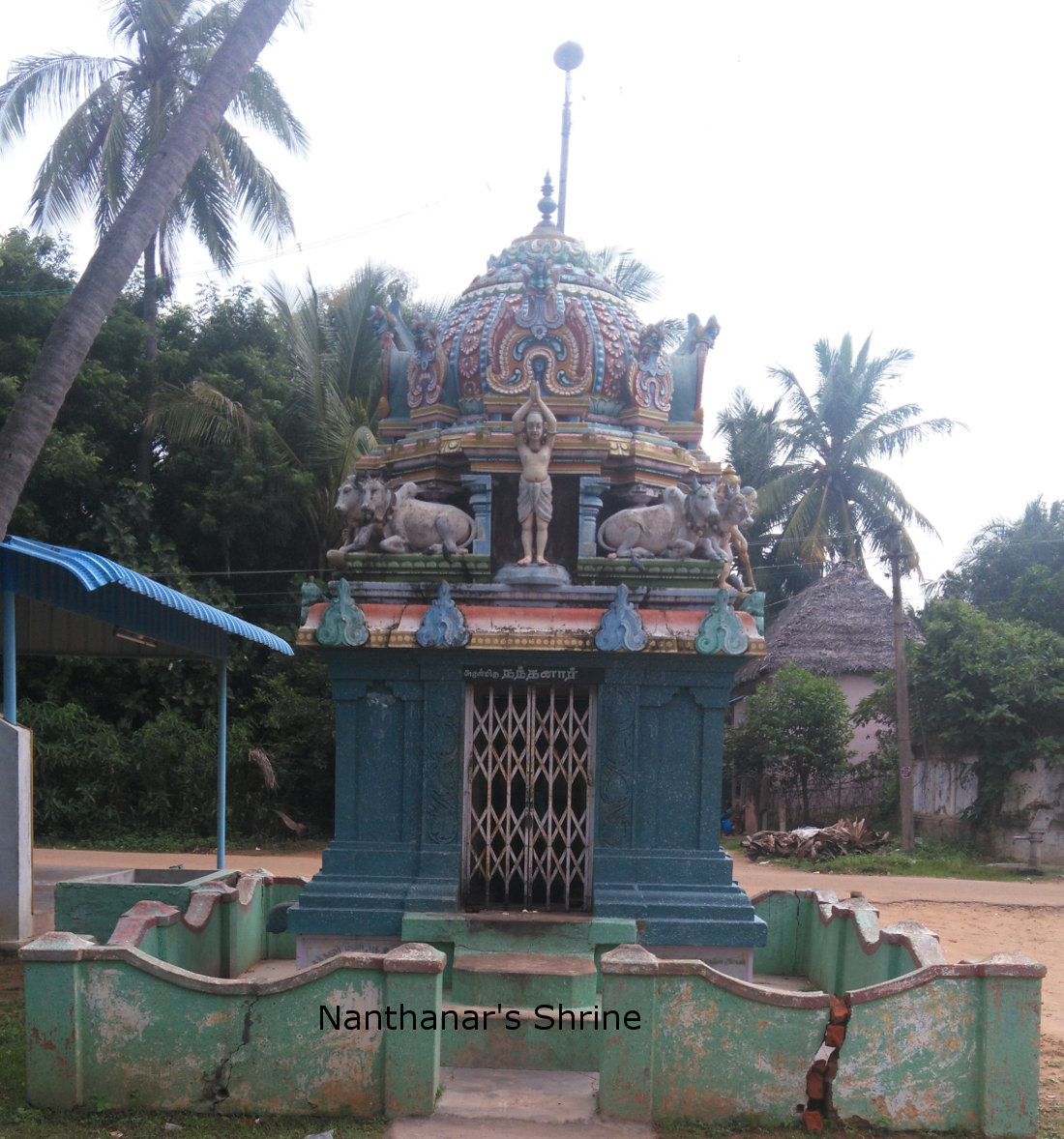 Overcome with joy, Nanthanar wanted to do something for tis temple. He started digging a pond near the temple for the welfare of the devotees. He prayed to Lord Shiva for his blessings to accomplish his task. It is believed that Lord Shiva instructed Lord Vinayakar to help Nanthanar to complete his task. Lord Vinayakar along with his “Boothaganas” (the lord’s security), in the form of labourers, dug the pond overnight. This pond is known as “Rishabha Theertham” (also known as Ganapathy Theertham).  Lord Vinayakar here is praised as “Kulam Vettiya Vinayakar” (meaning the god who dug the pond).

Nornally the idols of Dhwarabalakas (gate keepers) at the sanctum’s entrance in Shiva temples are standing erect and facing ahead. However, here their faces are slightly tilted and positioned diagonally. This is meant to signify that one Dhwarabalaka informs the lord that “Nanthanar has come for a dharshan and is waiting outside”. The other one seems to be passing the lord’s instructions to Nandhi to step aside. Both the Nandhis, the one inside the sanctum and the other outside it is not in their regular position.

Another legend associated with this temple is that involving a debate between Lord Shiva and Goddess Parvathi. When they had a debate as to who was more charming, Lord Shiva took out a Dharbhai (a grass used in rituals) and made three knots in it and threw it down to the earth. He further said that wherever the Dharbhai falls to the ground, he would comment on Goddess Parvathy’s beauty. The Dharbhai fell on the ground at this place and got converted into the “Pancha lingams”. These Pancha lingams are situated inside the temple.

At the same time, it is believed that the Chola King Rajendran was also staying here. He had come to this place to worship the lord and seek his blessing for a good monsoon as that region had been facing a drought for a long time. The king requested Sundarar to address this problem. Sundarar put up a condition saying that 12 Veli* of land had to be given to the temple if he could make it rain. The king readily agreed to his proposition. Upon completing his songs, Lord Shiva brought rains to this place. Since the rains had not stopped for a few days, Sundarar was again summoned by the king to fix the problem of imminent floods. Sundarar once again insisted that 12 more Veli of land be given to the temple should the rains cease after his song. The king accepted to Sundarar’s demand. The rain stopped after his songs and the temple became richer by 12 more Veli. In his hymn of this temple, in the 2nd stanza, Saint Sundarar mentioned about this incident.

After the Thiripura Samharam (an incident involving the killing of three demons), Lord Shiva made two of the demons as the gate keepers (Dwarapalakas) of the sanctum sanctorum. The third one became the lord’s drummer.

In his hymn of this temple, in the 8th stanza, Saint Sundarar mentioned about this incident. Also, in front of Lord Natarajar of this temple, there is a musical instrument (“Panchamukha Vadhyam” or “Manimuzha” in Tamil) which is played by this demon.

Other than the shrines of Lord Shiva and Goddess Parvathy, shrines and idols of lords Sundara Vinayakar, Murugan with his consorts, Somaskandar, Natarajar, Gajalakshmi, Nagar, Nalvar, Kalikkama Nayanar, Suryan, Lingams worshiped by Suryan and Agasthiyar can be seen in the corridors.

There are four Shivlingams in the inner corridor. Each of this lingam is said to represent one of Lord Shiva’s faces – Thathpurusha, Aghora, Vamadeva and Sadyojatha.

The idols of Ganapathy, Mahavishnu, Mahalkshmi and Durgai are placed in a row in the inner corridor. 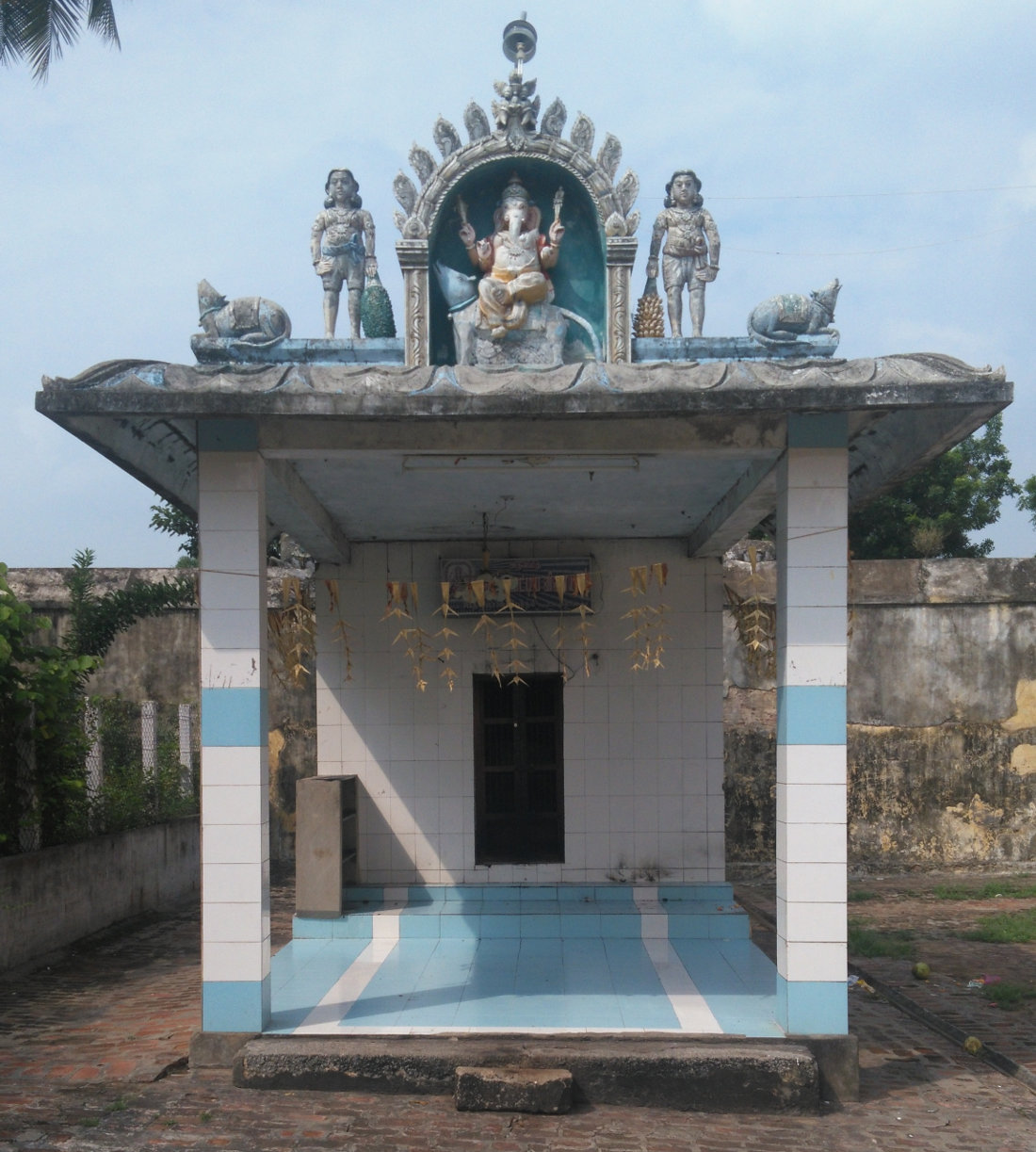 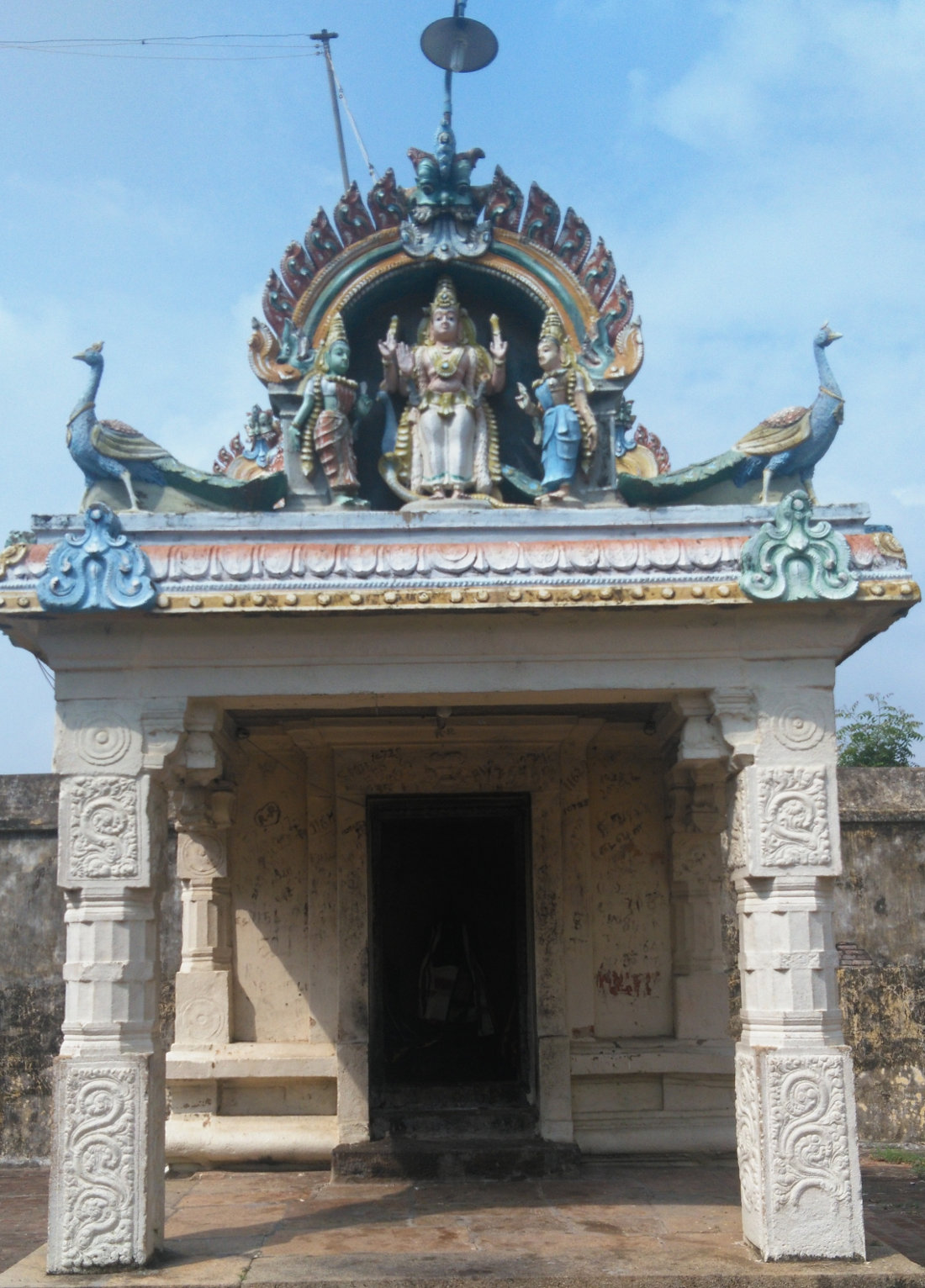 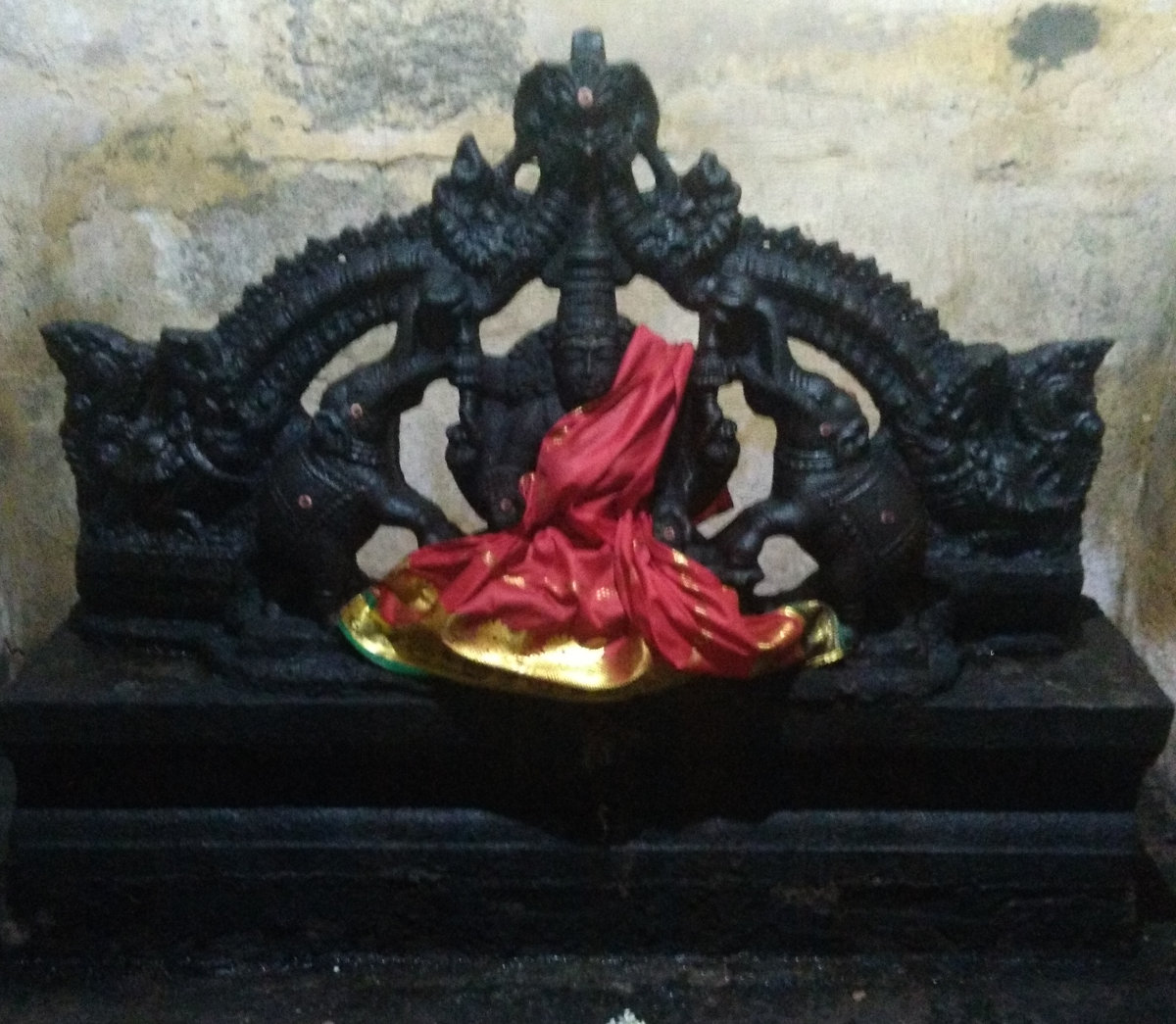 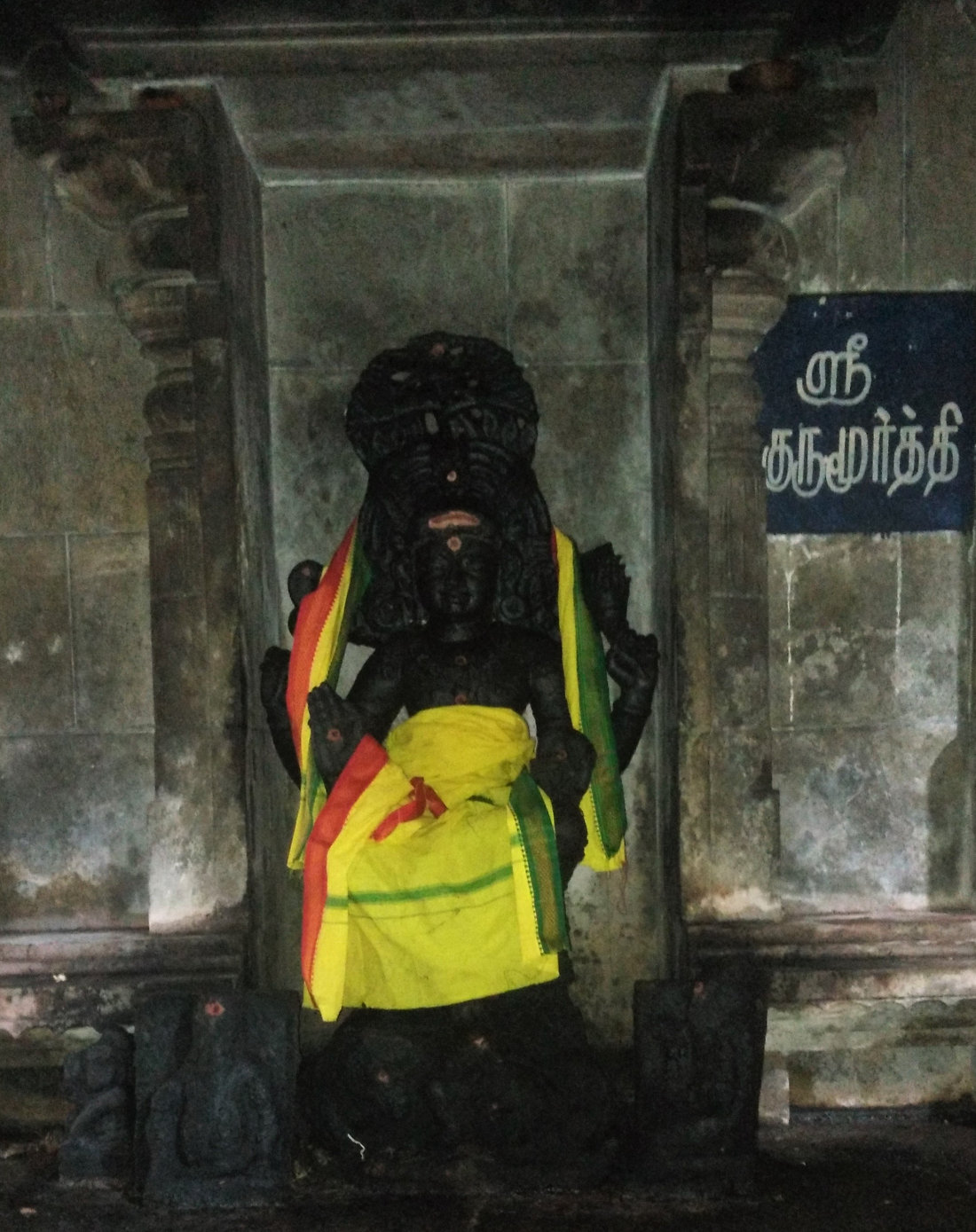 There are five Shivalingams representing Lord Shiva’s “panchamukham”. These lingams can be seen under the Sthala Viruksham of this temple and are in front of Lord Bhrama’s shrine.

There are two separate shrines for Nanthanar here – one in the outer corridor and the other one outside the temple near the main tower. 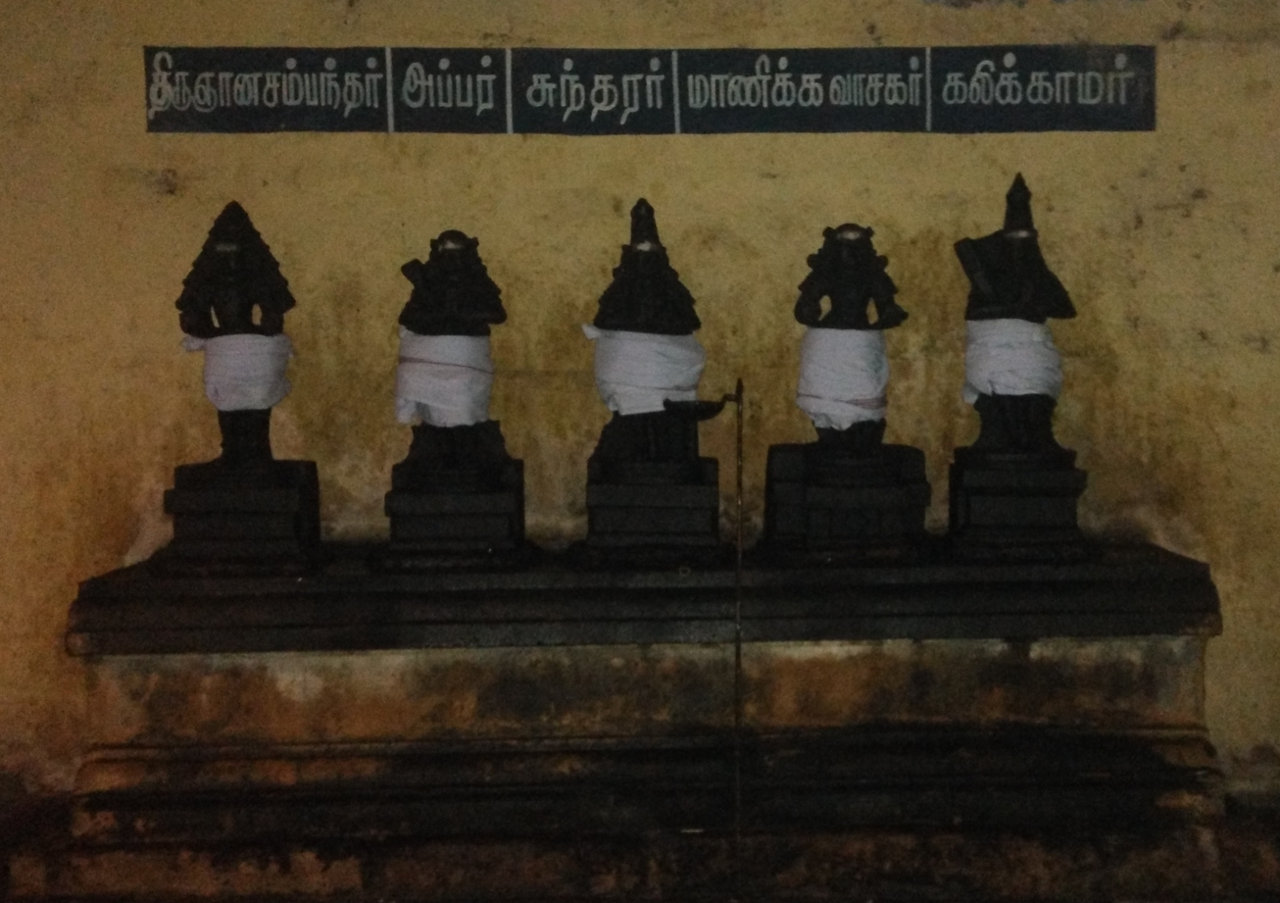 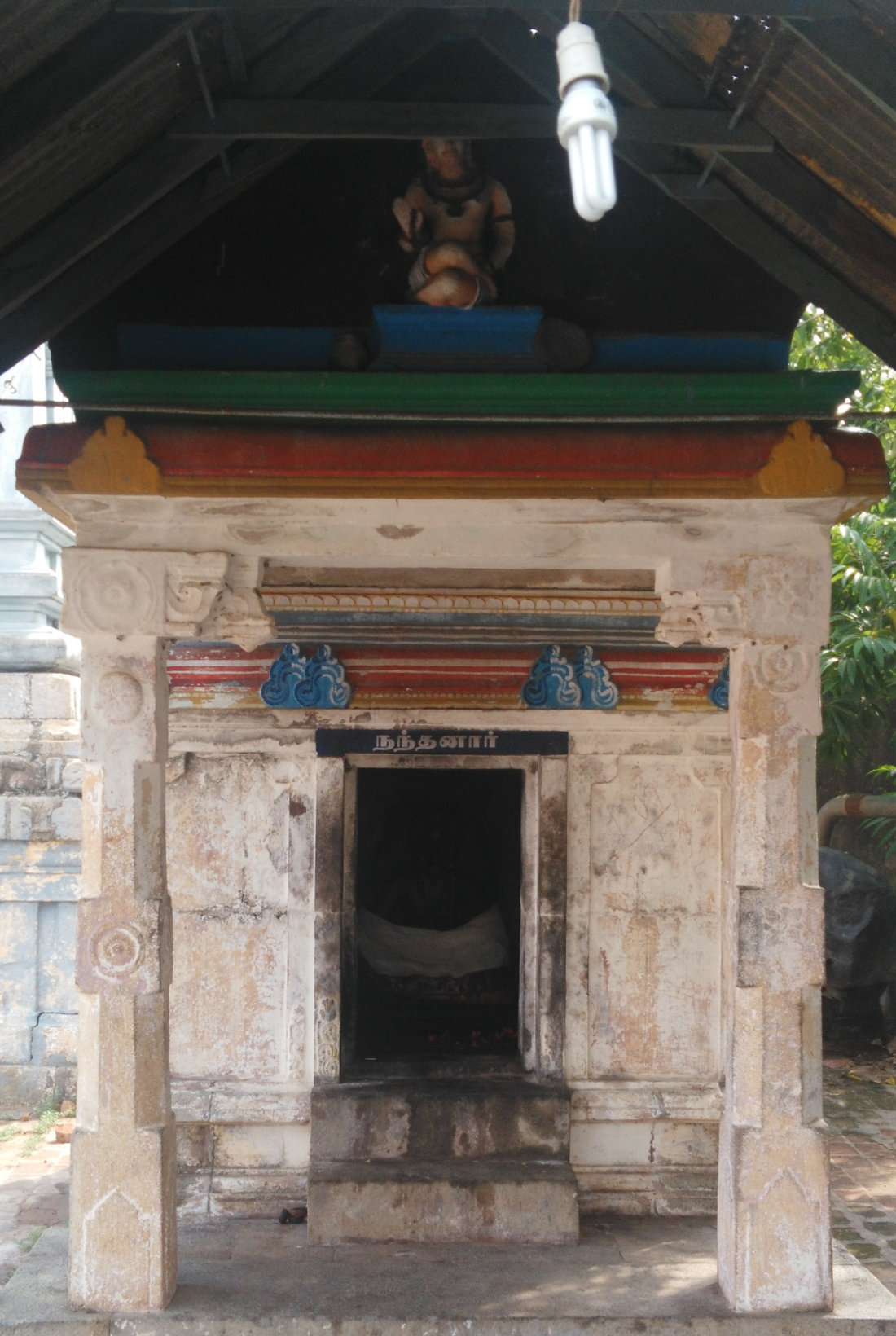 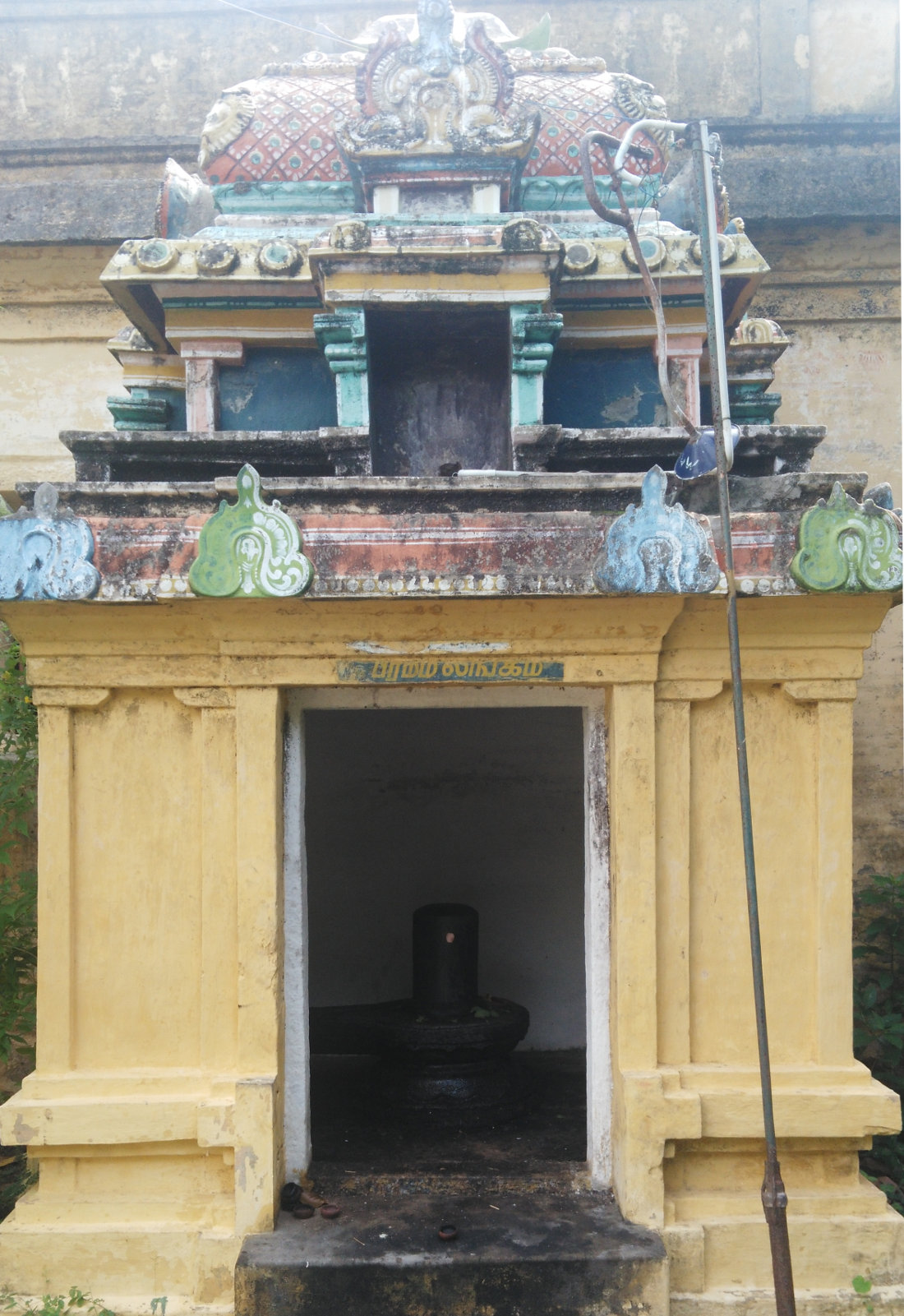 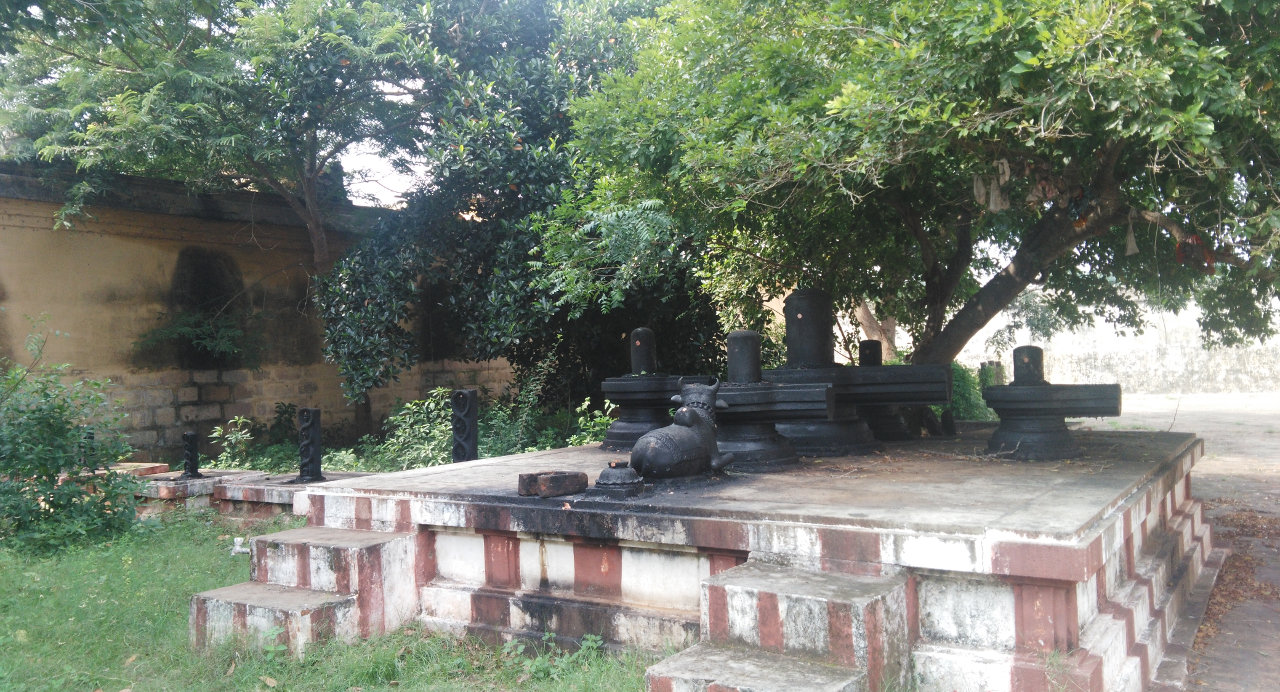 In this temple, almost all the idols are artistically made and look very beautiful.

In most of the temples, Nandhi will have its tongue protruding out but in this temple, its tongue is not visible. This Nandhi is carved out of a single stone and it looks very beautiful. Also, this is one of the biggest Nandhis in Tamil Nadu – it is 15 feet long, 7 feet wide and 7 feet tall. 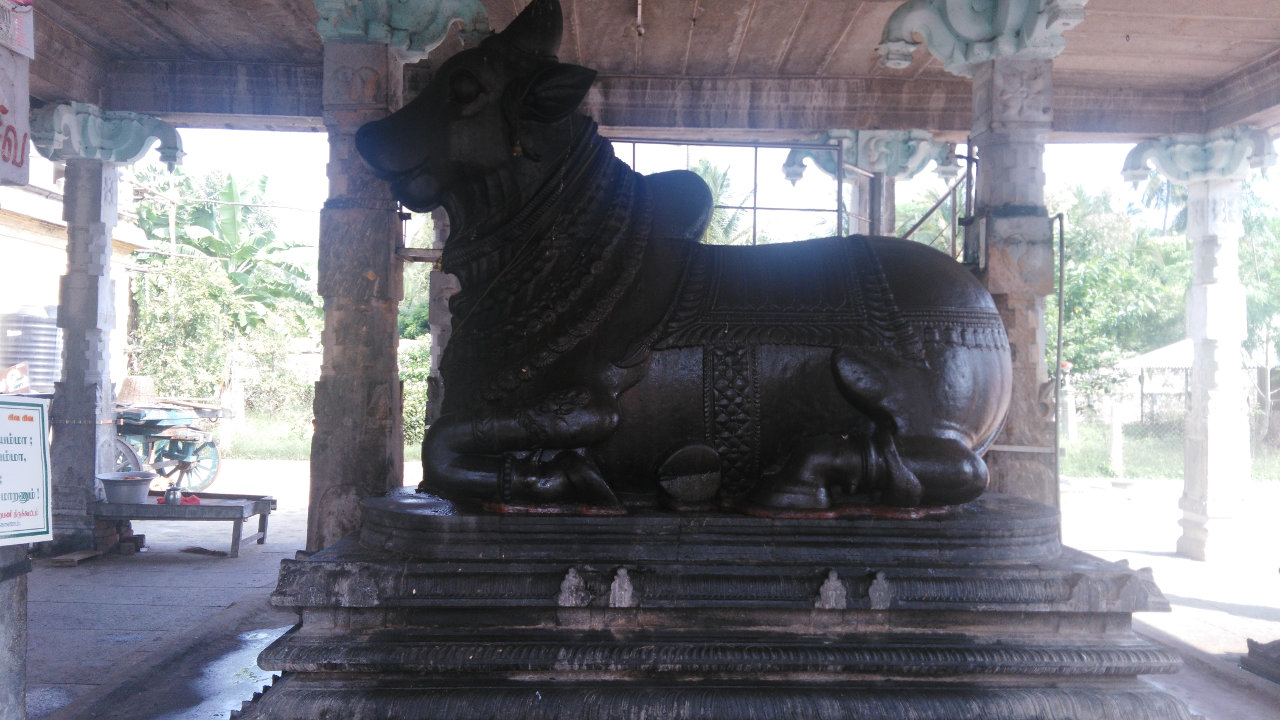 At the entrance of the sanctum sanctorum, on either side, beautiful reliefs of lord Vinayakar and Murugan can be seen.

Devotees believe that worshiping the lord here will lead to removal of “Naga doshams” (related to serpent)  and sins from their previous birth.

Devotees also believe that worshipping the “Pancha lingams” here will remove the obstacles from their marriage proposals.

Vinayakar Chaturthi in the Tamil month of Aavani (Aug-Sept)

Navarathri in the Tamil month of Purattasi (Sept-Oct)

Thiru Karthikai in the Tamil month of Karthikai (Nov-Dec) 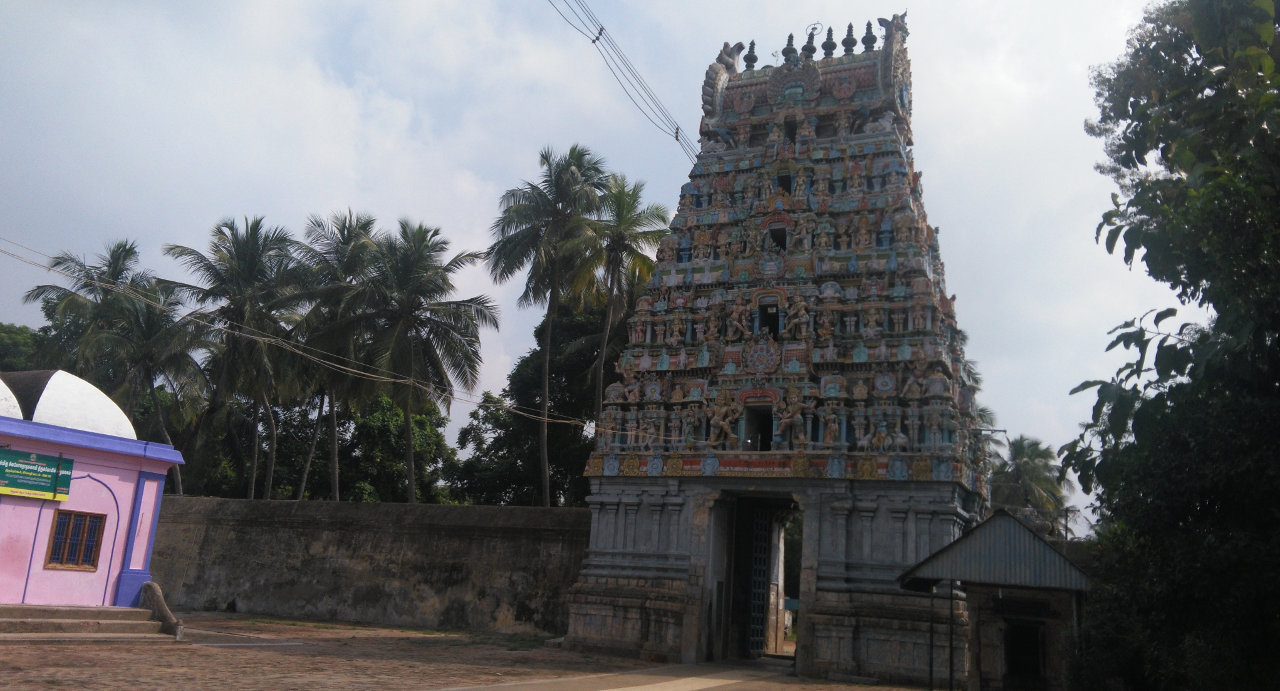 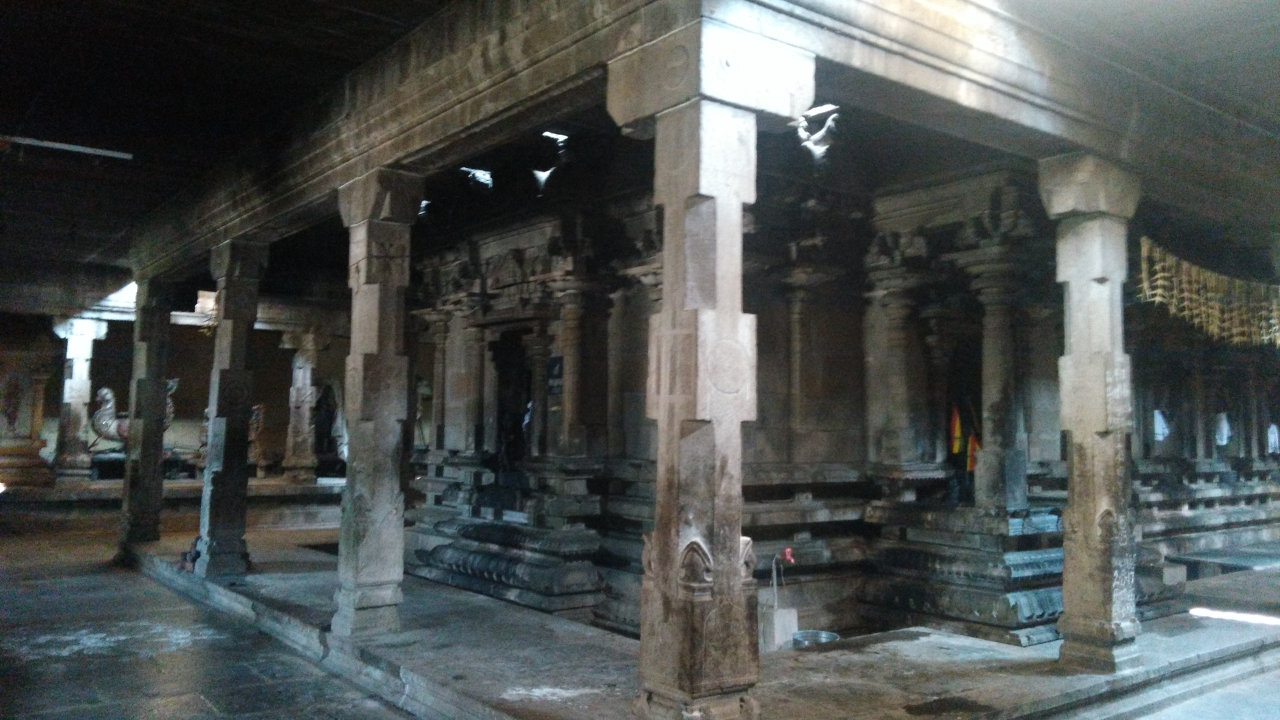