Thiruppurambiyam is situated at a distance of about 10 kms from Kumbakonam on the Kumbakonam to Thiruvaiyaru route (via Puliancheri). Take the diversion road from Puliancheri and proceed for about 6 kms to reach this temple.

The temple is situated on the northern bank of the river Manniyaru and is surrounded by three rivers - Manniyaru, Kollidam and the Cauvery.

Once this temple was under the control of the Pandya kingdom and king Varaguna Pandyan built this temple in brick. Later, the Chola king Adhithya Chola-I converted it into a granite temple.

Some of the idols in the koshtam and the corridor are badly broken. It is believed that this was done a long time ago by people from other religious backgrounds.

This temple is under the administrative control of Thirugnanasambantha Swamigal Adheenam, Madurai. 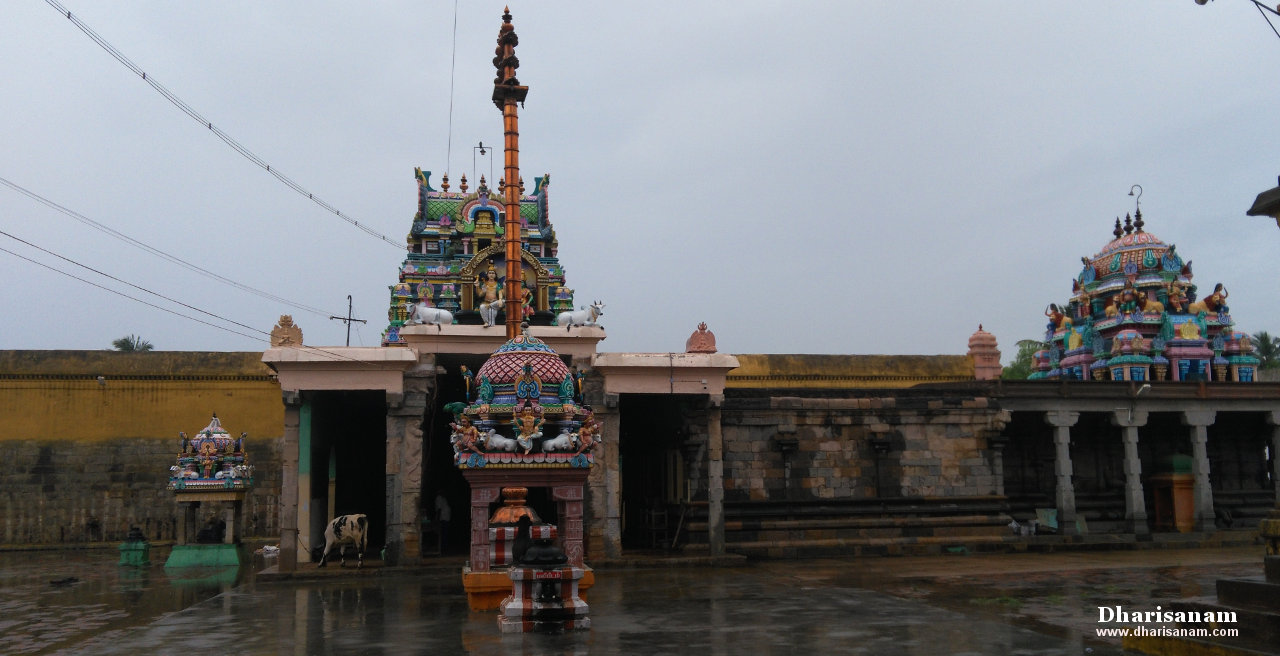 According to Hindu mythology, the end of every “yuga” is marked by a huge flood that leads to the destruction of all living beings on the earth. This is called the “Pralayam”. During the deluge at the end of the “Krutha yuga”, on the instruction of Lord Shiva, Vinayakar of this temple saved this place by diverting the water of all the seven seas into this temple’s well. This well is called the “Saptha Sagara Koobam” (“seven sea well”) and it is located on the eastern bank of this temple’s tank. Hence the Vinayakar here is praised as “Pralayam Katha Vinayakar”. This place gets the name Thiru Purambayam because it was an exception and wa not affected by the Pralayam (“puram” means exception and “payas” means water in Tamil). 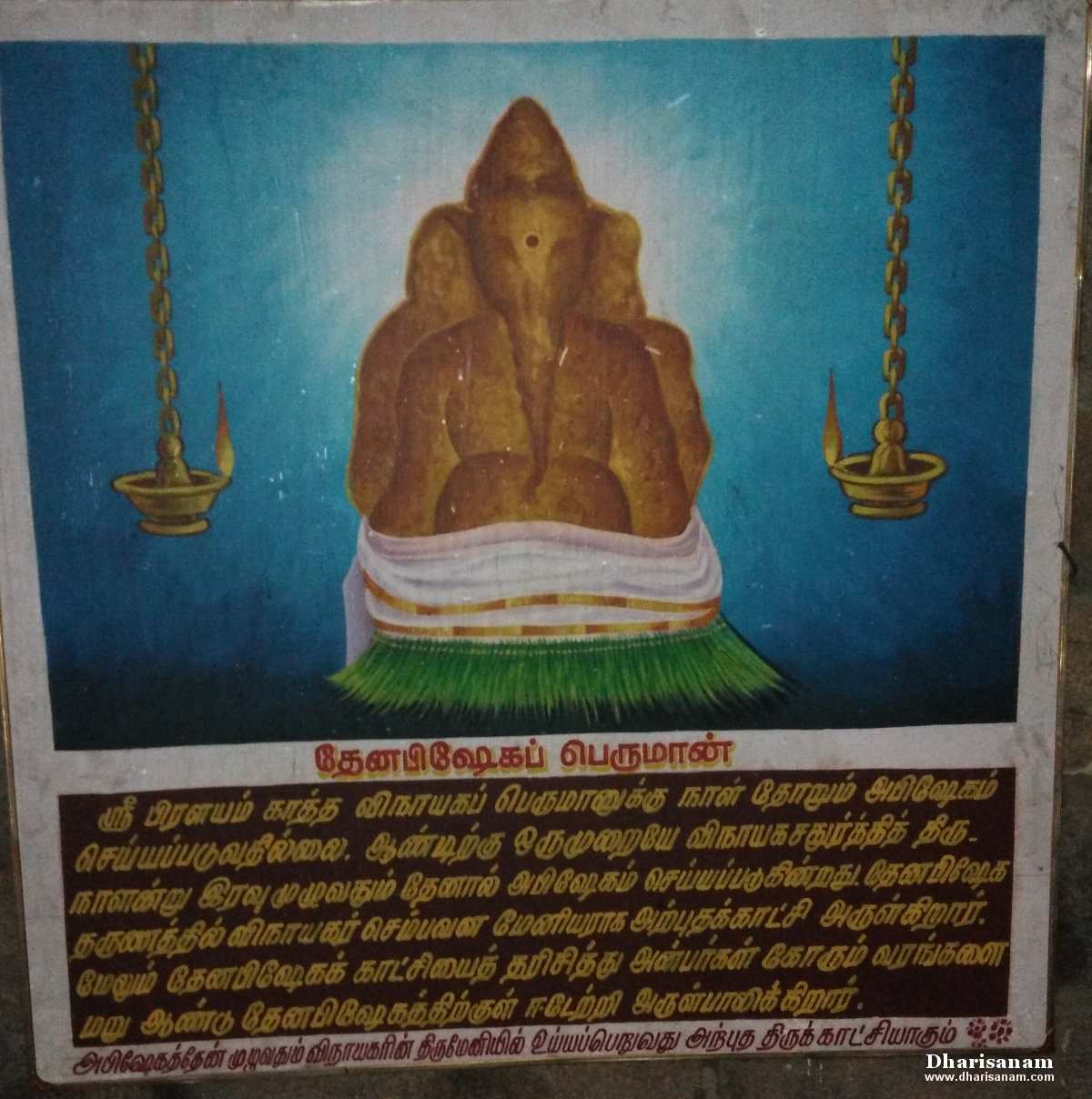 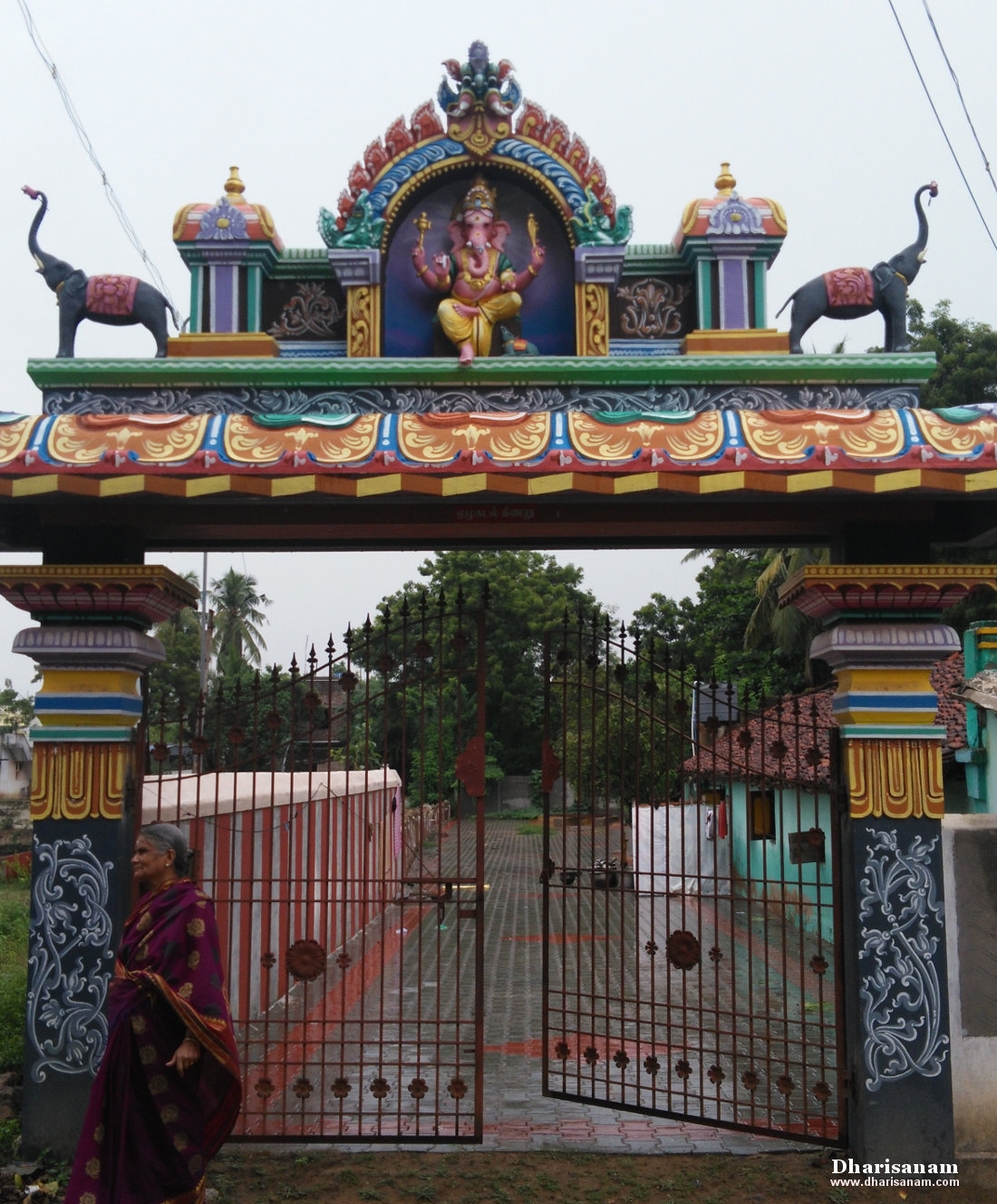 The idol of Vinayakar in this temple is believed to have been created by Lord Varunan (the god of water) using foam and shells from the sea. No abhishekam is performed to this Vinayakar except on the Vinayaka Chathurthi day. On this day, abhisheham is performed to him for the entire night with honey only. All the honey that is poured on the idol gets fully absorbed.

Another legend associated with this temple is that the 64th “Thiruvilaiyadal” of Lord Shiva took place here. Thiruvilaiyadal is a collection of sixty-four epics and devotional stories written in the 16th century by Saint Paranjothi Munivar. They record the stories of Lord Shiva appearing on earth in various disguises to test his devotees.

This 64th Thiruvilaiyadal refers to the following story. It is believed that a businessman (a chettiyar) from Kaveripoom Pattinam (Poompuhar) had a daughter named Rathnavalli. He wanted to marry her to his nephew who lived in Madurai. He fell ill and called his nephew to Poompuhar and gave him Rathnavalli’s hand in marriage before passing away from his illness. The boy decided to go back to Madurai with the girl and on their way, they spent the night in this temple. But unfortunately, he died of a snake bite on that night. Rathnavalli cried and prayed to Lord Shiva for help. It is believed that Lord Shiva brought him back to life and got them married under a Vanni tree in this temple’s corridors. Since there was no one else present at that time, the wedding took place in the presence of inanimate objects like this temple’s kitchen, its well and the Vanni tree.

Later Rathnavalli’s marriage was challenged by the businessman’s first wife in Madurai. In order to show proof of the wedding, Lord Shiva went to Madurai’s Sri Sundareswarar temple along with the items that had witnessed the marriage - the kitchen, the well and the Vanni tree from Thiruppurambayam. Hence the lord here is praised as “Sri Satchinathar” (the lord who stood witness). Even today one can see the kitchen, well and the Vanni tree in the corridors of the Madurai temple. Interestingly, all the three items can also be seen here.

It is believed that a wood cutter (a “Pulainjan”) from the nearby village Govandhaputhur, who supplied fire woods to this temple got darshan of Lord Shiva (in the form of Lord Dakshinamurthy).

King Haridwajan of Magada kingdom had suffered from a disease called “Muyalagan” due to a curse by Sage Durvasa. He visited many Shiva temples and finally came to this place and worshiped the lord here. It is believed that he was relieved of his curse and was cured.

There is a separate shrine for Sri Chandikeswari in the koshtam of Goddess Parvathy’s shrine. 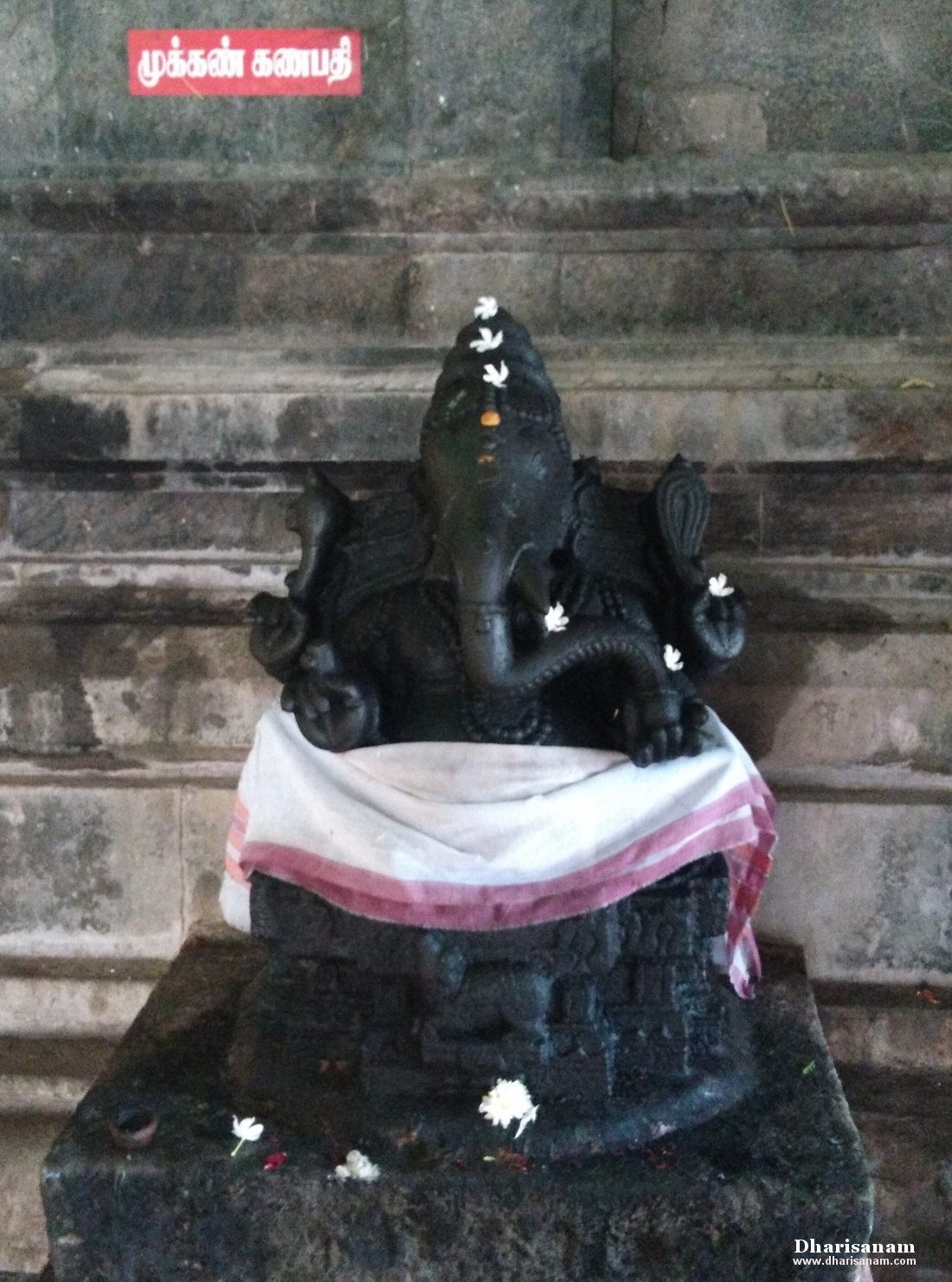 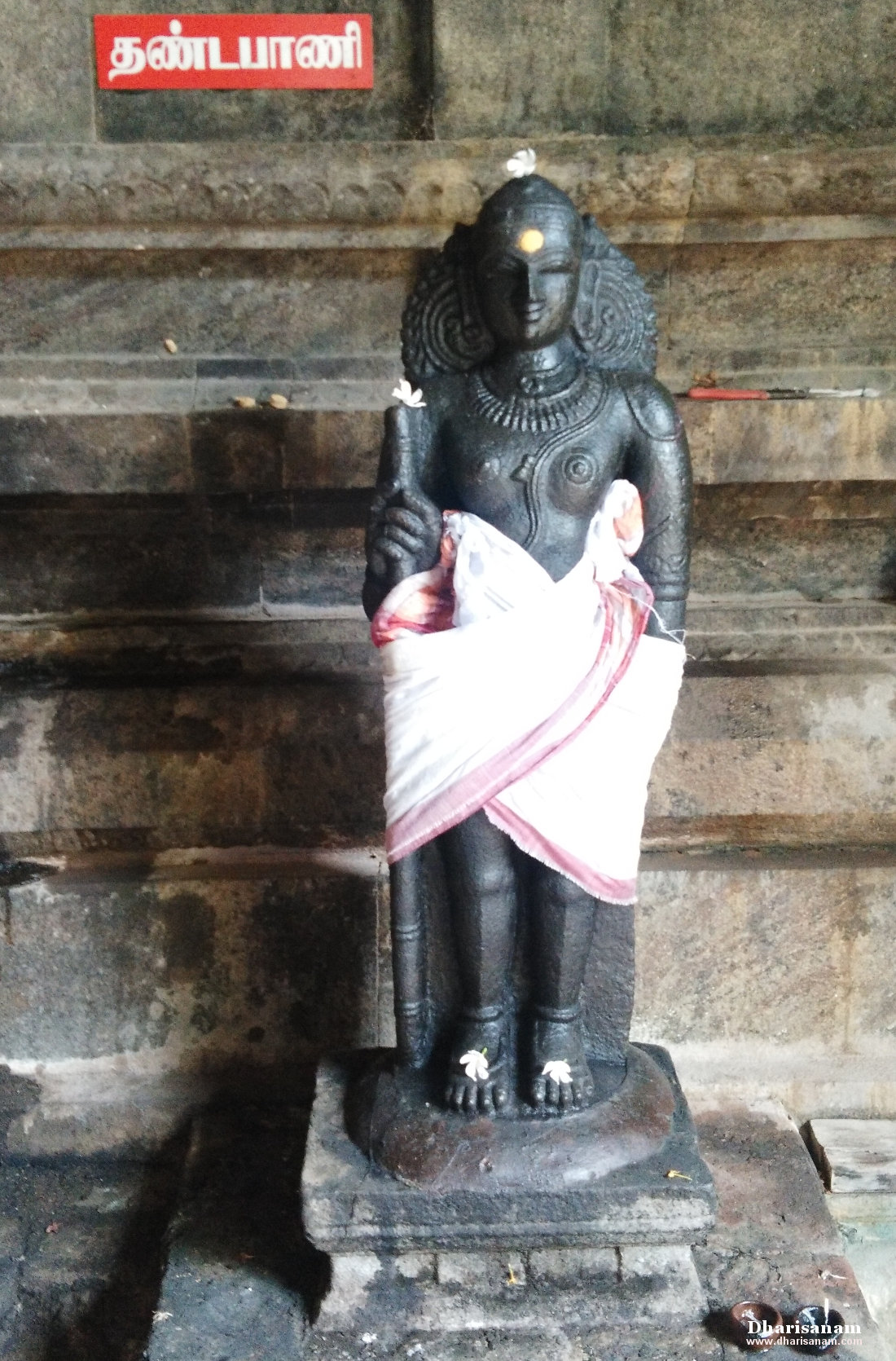 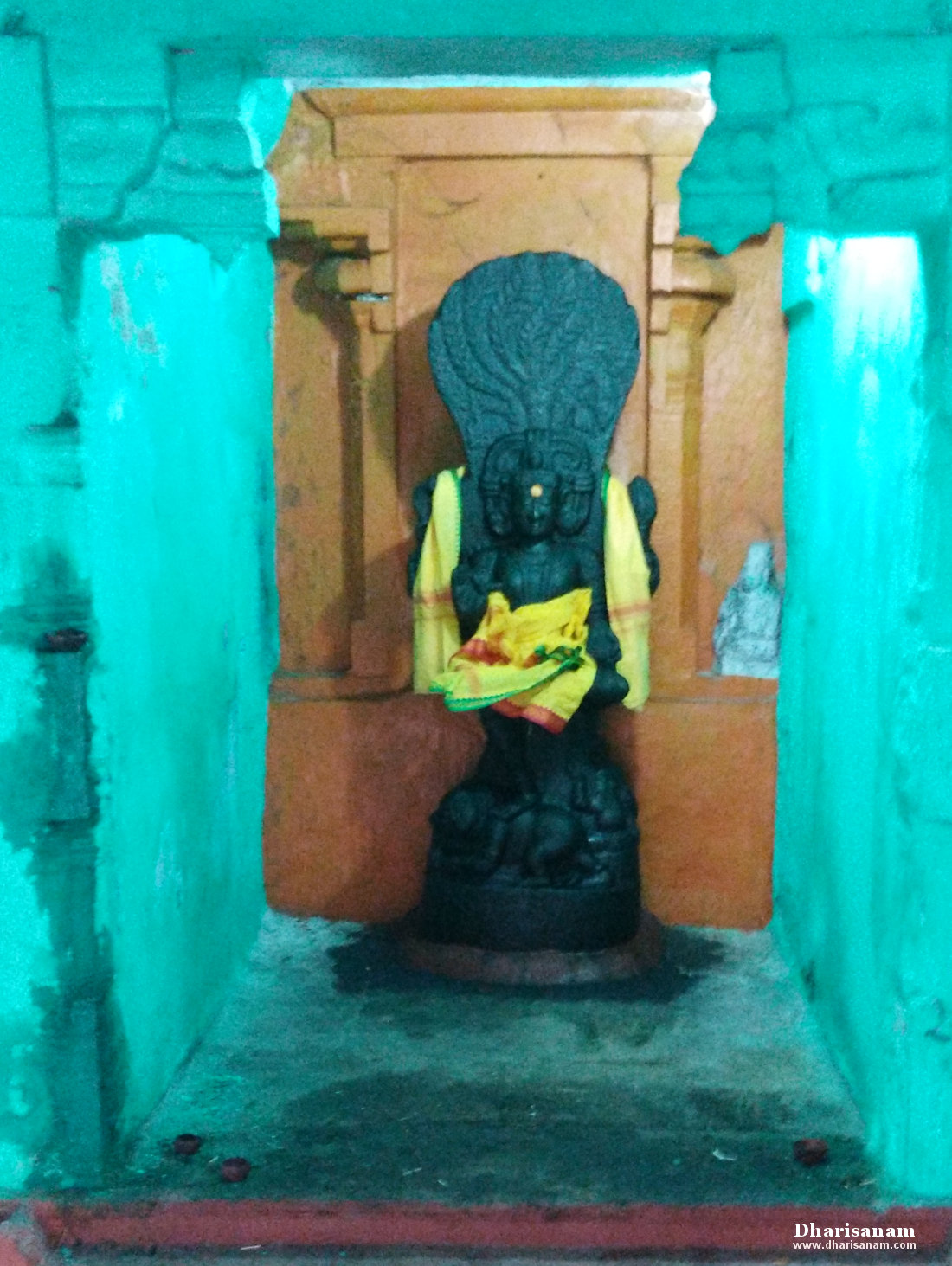 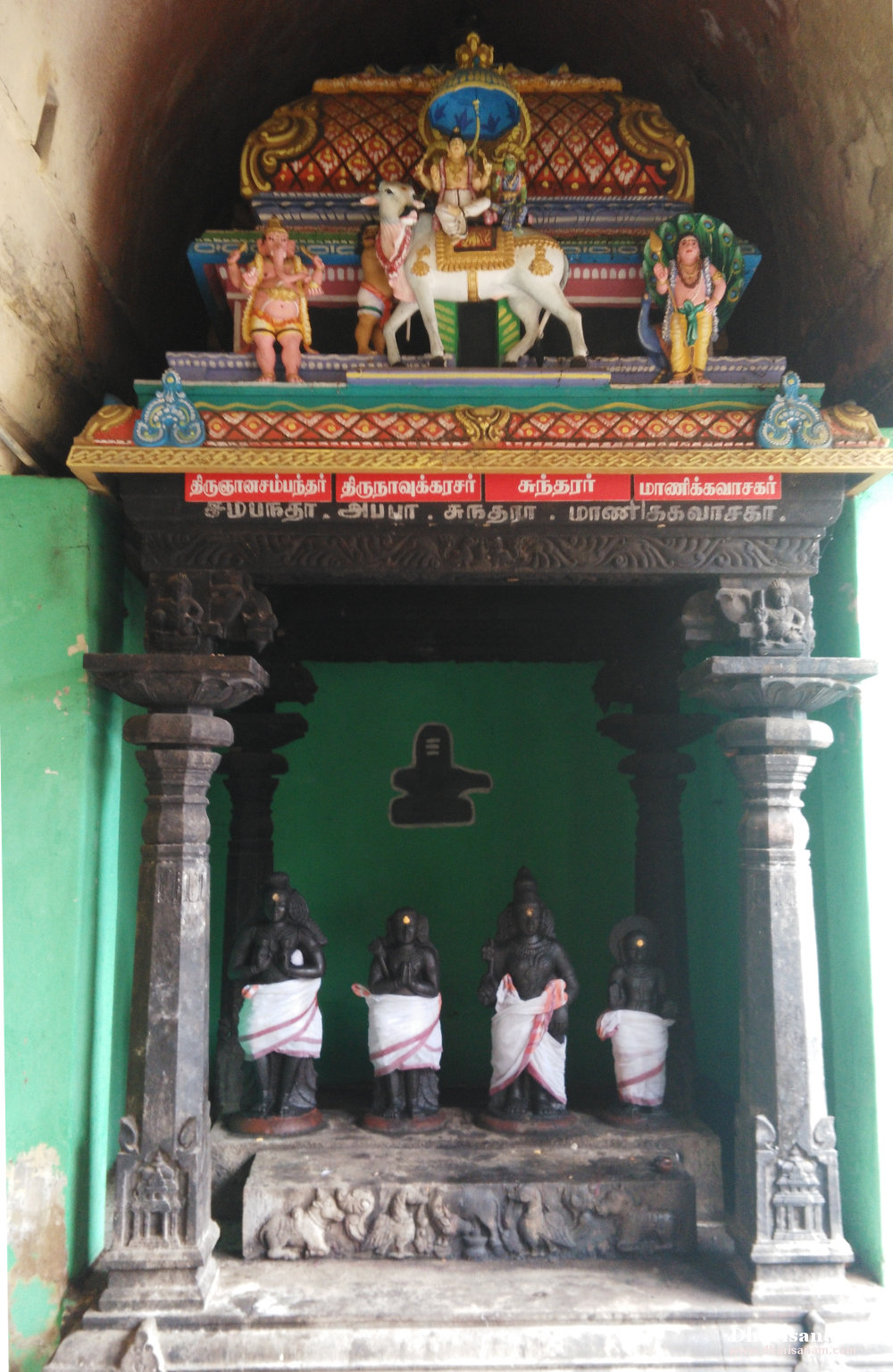 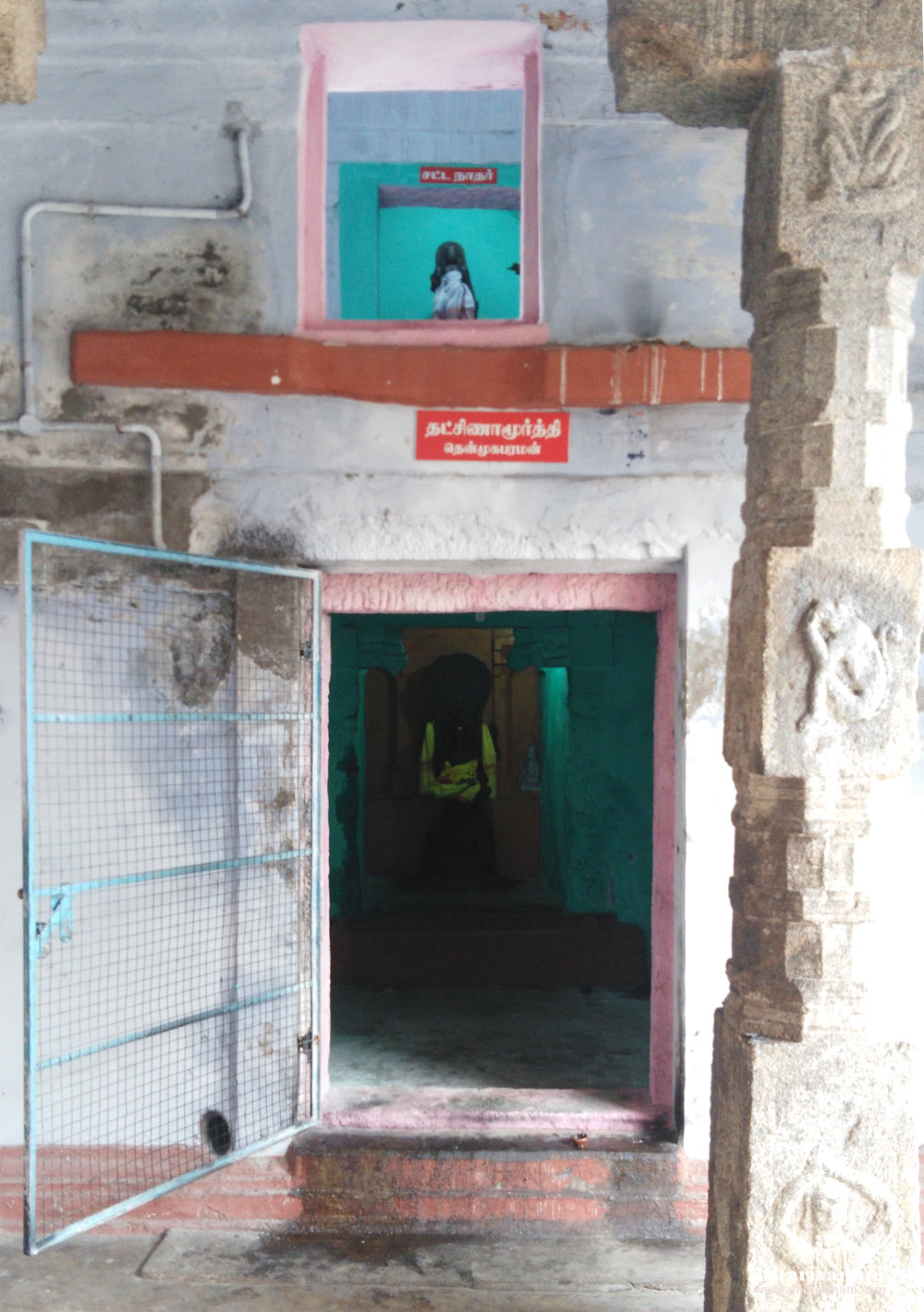 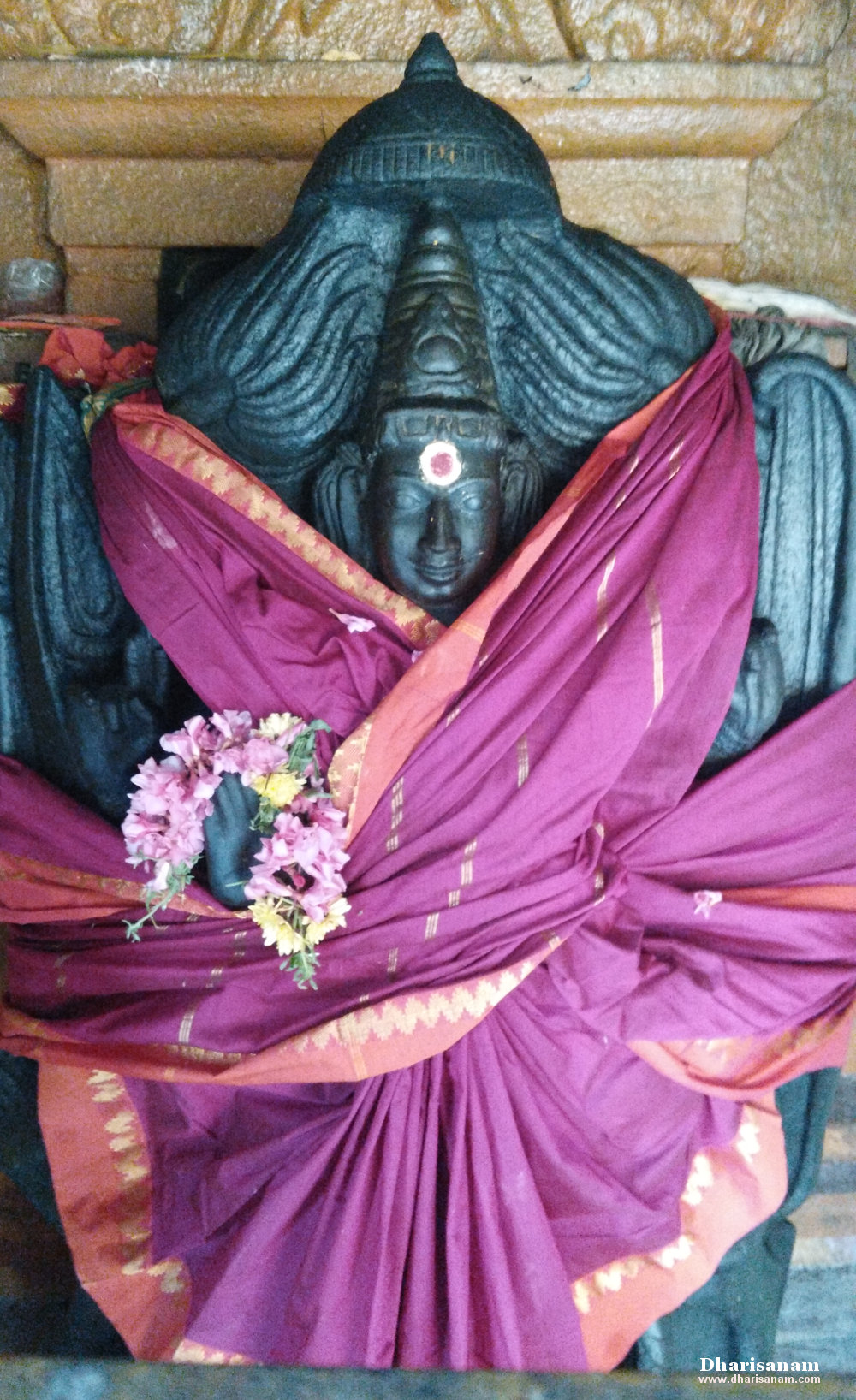 In Tamil Nadu, this is the only place where Lord Dakshinamurthy has a separate temple. He is also praised as “Sri Aram Uraitha Nayanar”. This temple is situated outside the entrance of the main tower and on the southern bank of the temple’s tank. This is one of the 24 sacred Dakshinamurthy shrines and is considered to be very auspicious.

There are beautiful sculptures on the roof of Nandhi’s shrine.

It is believed that Lord Suryan (Sun) worships Lord Shiva of this temple by directing his rays on the lingam every year for three days in the Tamil month of Panguni (Mar-Apr) on 3rd, 4th and 5th.

Devotees believe that by worshiping Lord Shiva here, obstacles from their marriage proposals will be removed. This is because Lord Shiva himself had conducted the marriage of Rathnavalli here.

Masi Maham and Maha Shivrathri in the Tamil month of Masi (Feb-Mar). 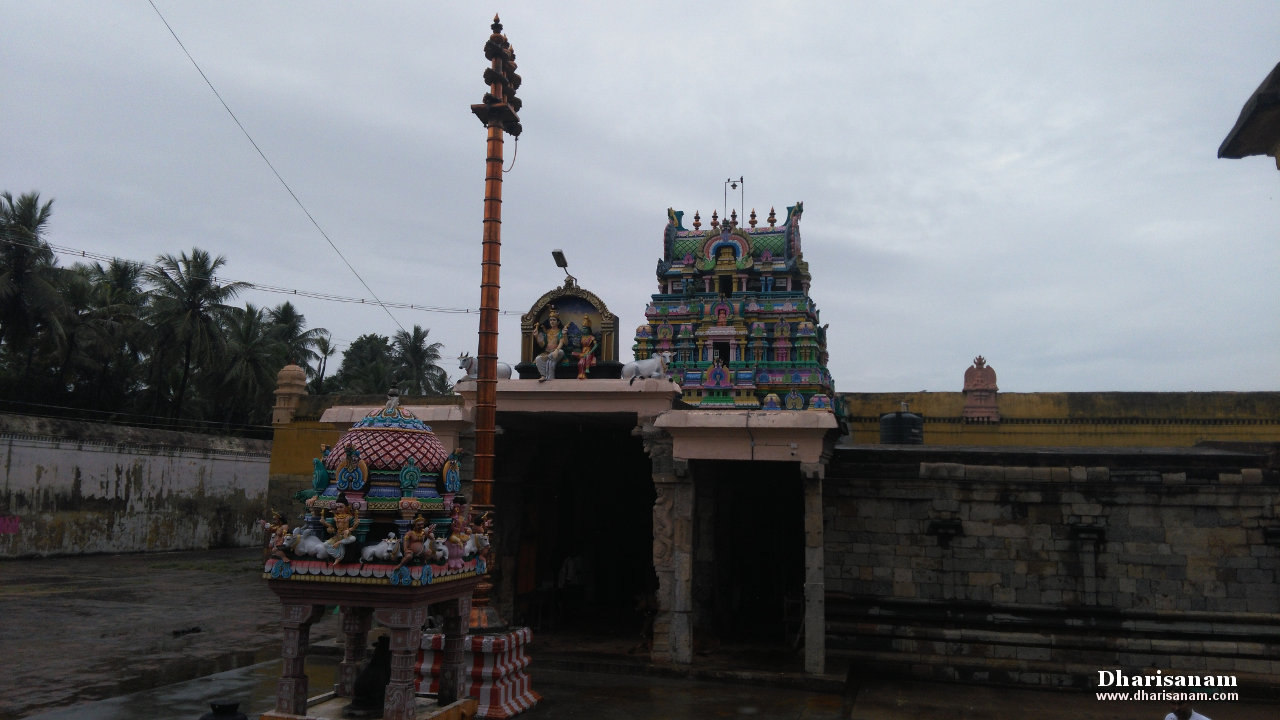 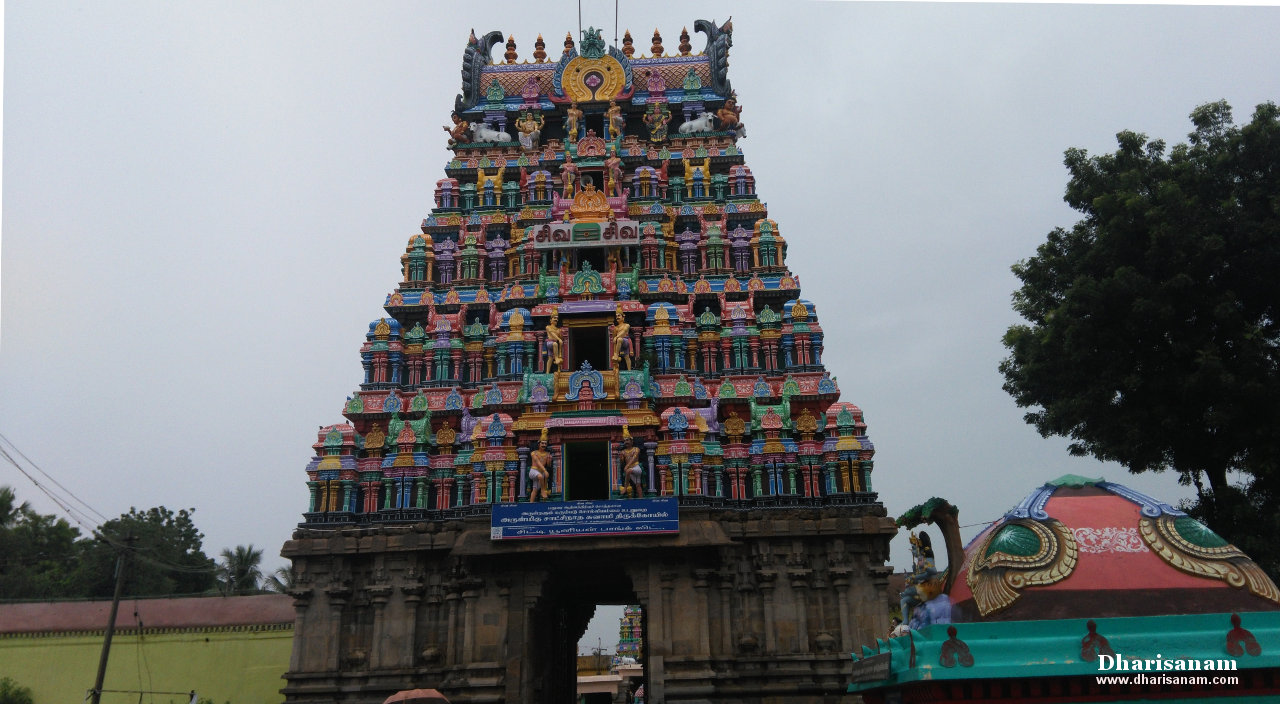 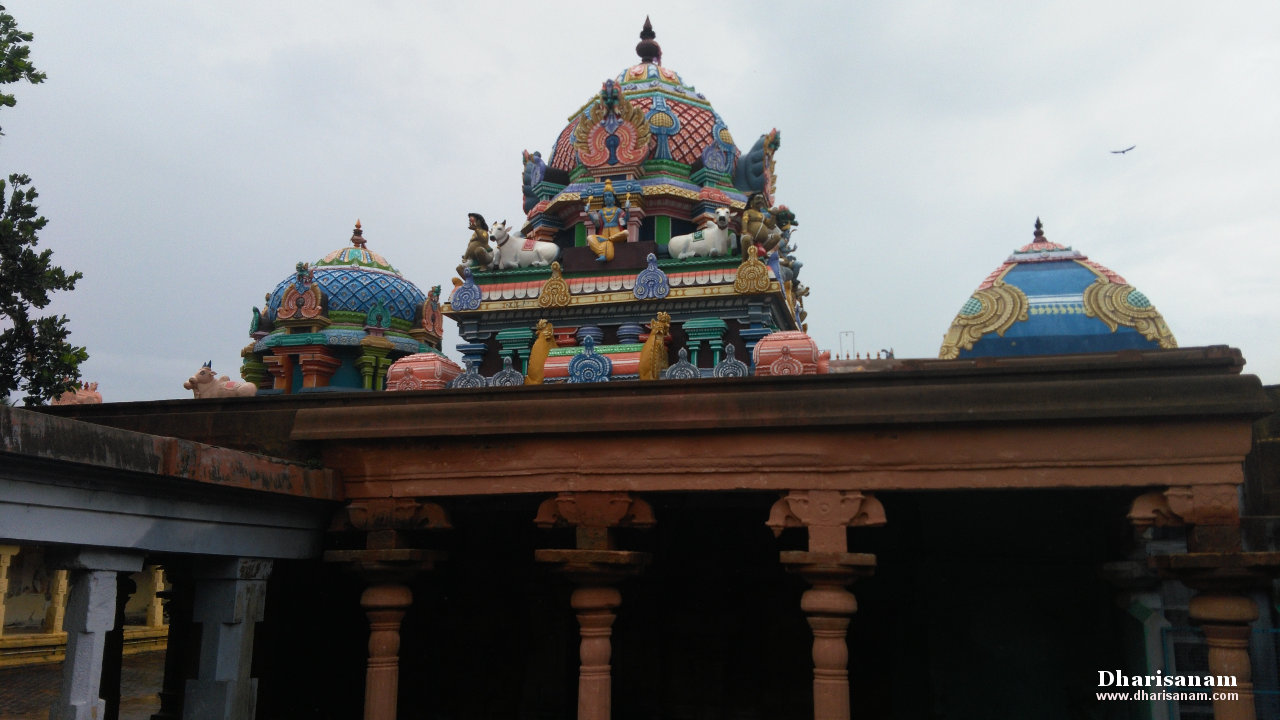 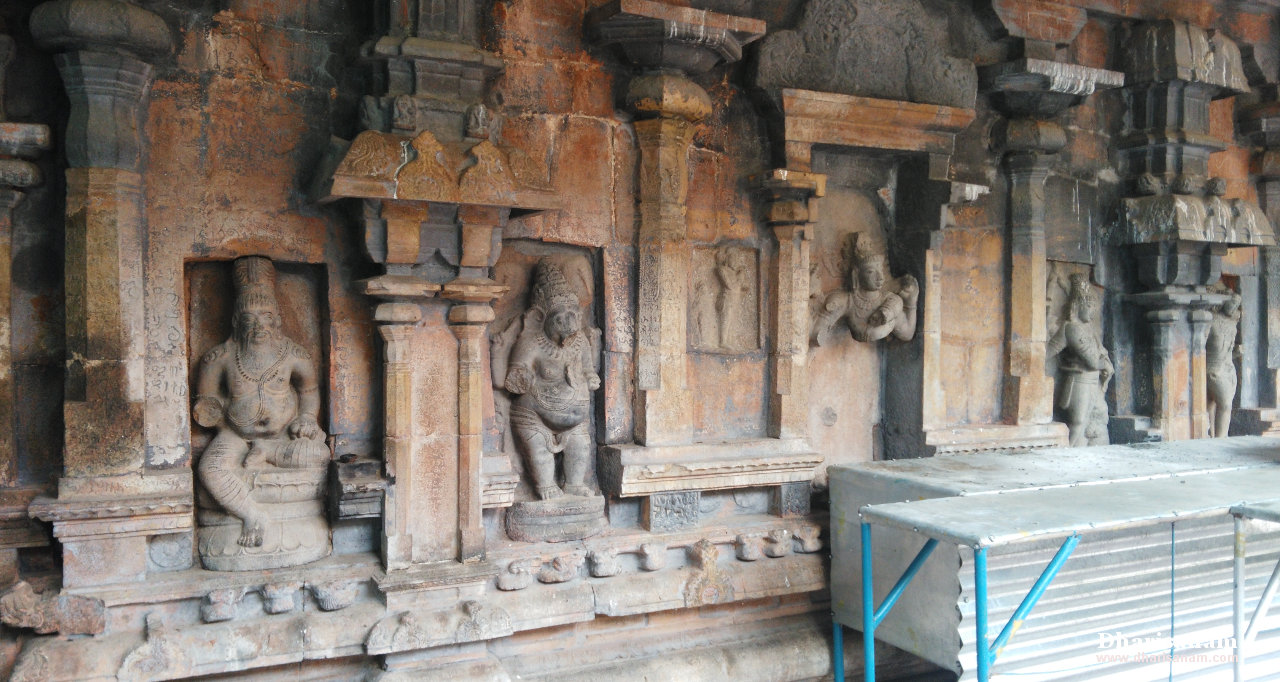