Thiru Thelicherry is located in Karaikkal on the Bharathiyar Road. It is right at the entrance to the Karikkal town while coming from the Poraiyar route. There is a railway station in Karaikkal.

Karaikkal is one of the oldest port cities and business centres of South India. Now Karaikkal is a part of Puducherry.

It is believed that Lord Shiva here has seen the pasage of four “Yugas”. As per the sthala purana, this place was known as Brahma Vanam in Kretha Yugam, Sameevanam in Thretha Yugam, Ananda Vanam in Dwapara Yugam and Mukthi Vanam in the present Kaliyugam. 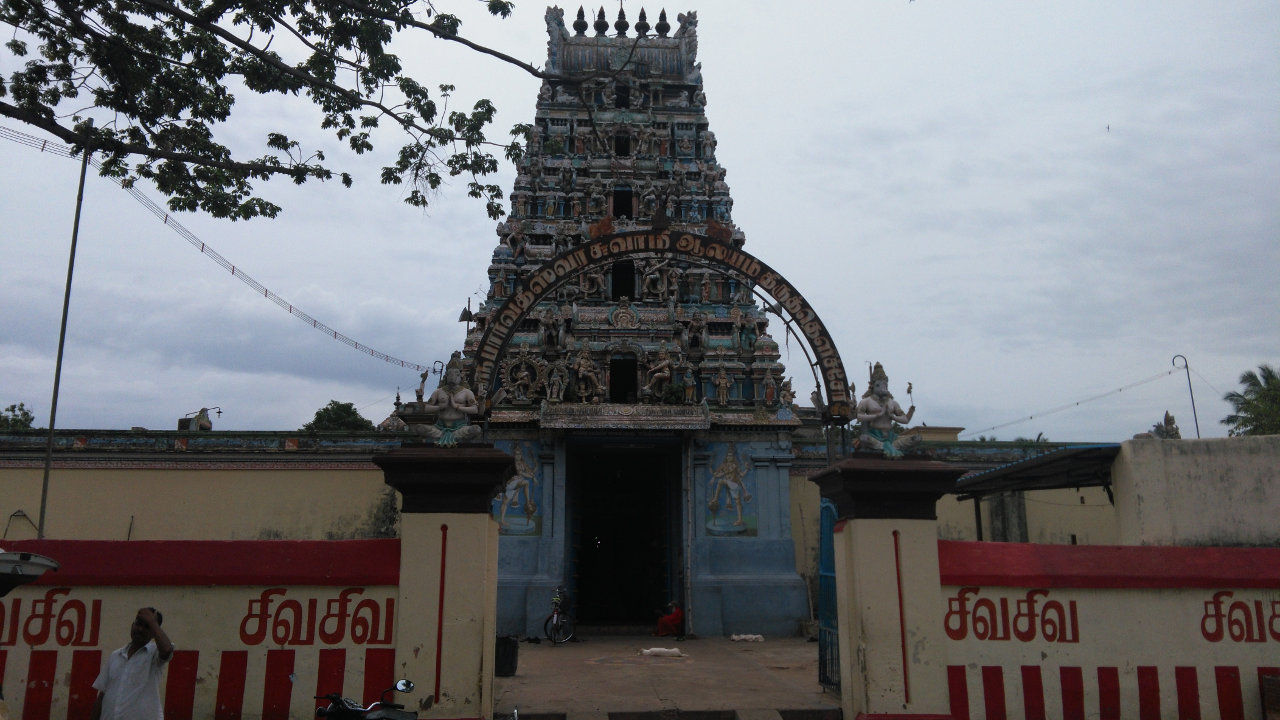 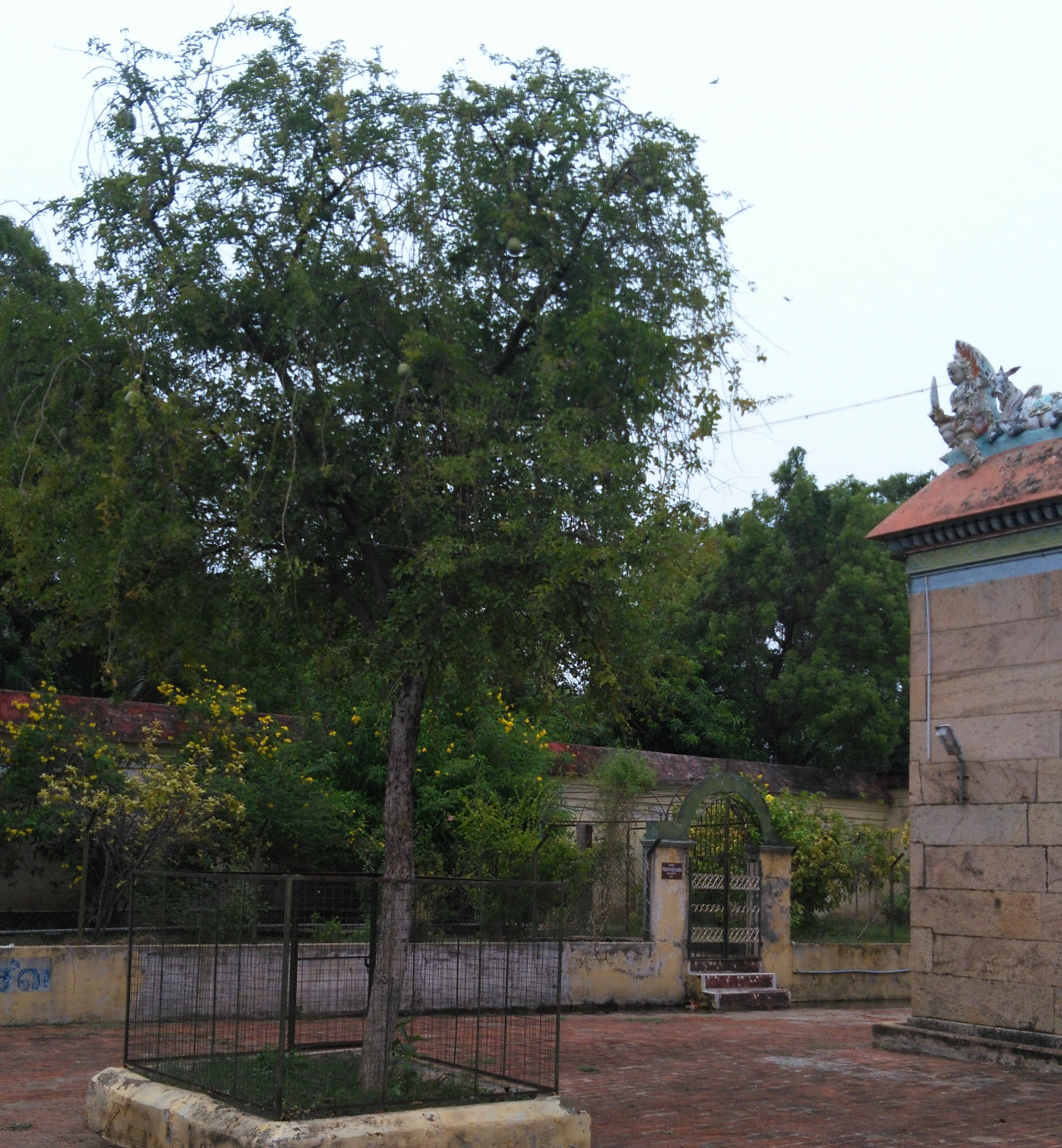 Lord Suryan’s wife Chaya Devi was deeply saddened by the fact that her husband was not affectionate to her. When Maharishi Narada informed her father about her state, he was enraged and cursed Lord Suryan. Suryan lost his shining glory and in order to seek relief from this curse he started visiting many temples. He came to this place, created a spring and worshiped Lord Parvatheeswarar. The lord answered his prayers and relieved him from the curse. As Lord Suryan is also known as “Bhaskara”, the lord here is also praised as “Bhaskara Lingam” and this place is known as Bhaskara Sthalam.

It is believed that Lord Suryan worships Lord Shiva of this temple by directing his rays on the lingam for 10 days starting from 13th to 22nd in the Tamil month of Panguni (March-April) every year.

Another legend associated with this place is that involving Goddess Parvathi. She was angry with her father, Dakshan, for not having given Lord Shiva the respect that he deserves. For this reason, she no longer wished to be called Dakshan’s daughter. Lord Shiva blessed her to born on earth as the daughter of Sage Kathyayana in Thiruthelichery. She performed rigorous penance here and when she attained the marriage age, she took her place at Lord Shiva’s side. As she performed penance (“Thapas” in Tamil) here, she is praised as “Sri Thapasvini”. As Lord Shiva married Goddess Parvathy here, he is also praised as “Sri Parvatheeswarar”.

Another legend is that due to lack of monsoon, this area was severely affected by draught. The then ruler, a Chola King, prayed to Lord Shiva to save the people from starvation. It is believed that Lord Shiva came to this place in the guise of a farmer, ploughed the fields and sowed paddy seeds. This fields yielded enormous harvest and the people were freed from the clutches of starvation. As Lord himself sowed seeds here, this place came to be known as “Thiru Theli Cherry” - “Theli” means to sow, “Cheri” means place and “Thiru is a respectful prefix in Tamil. 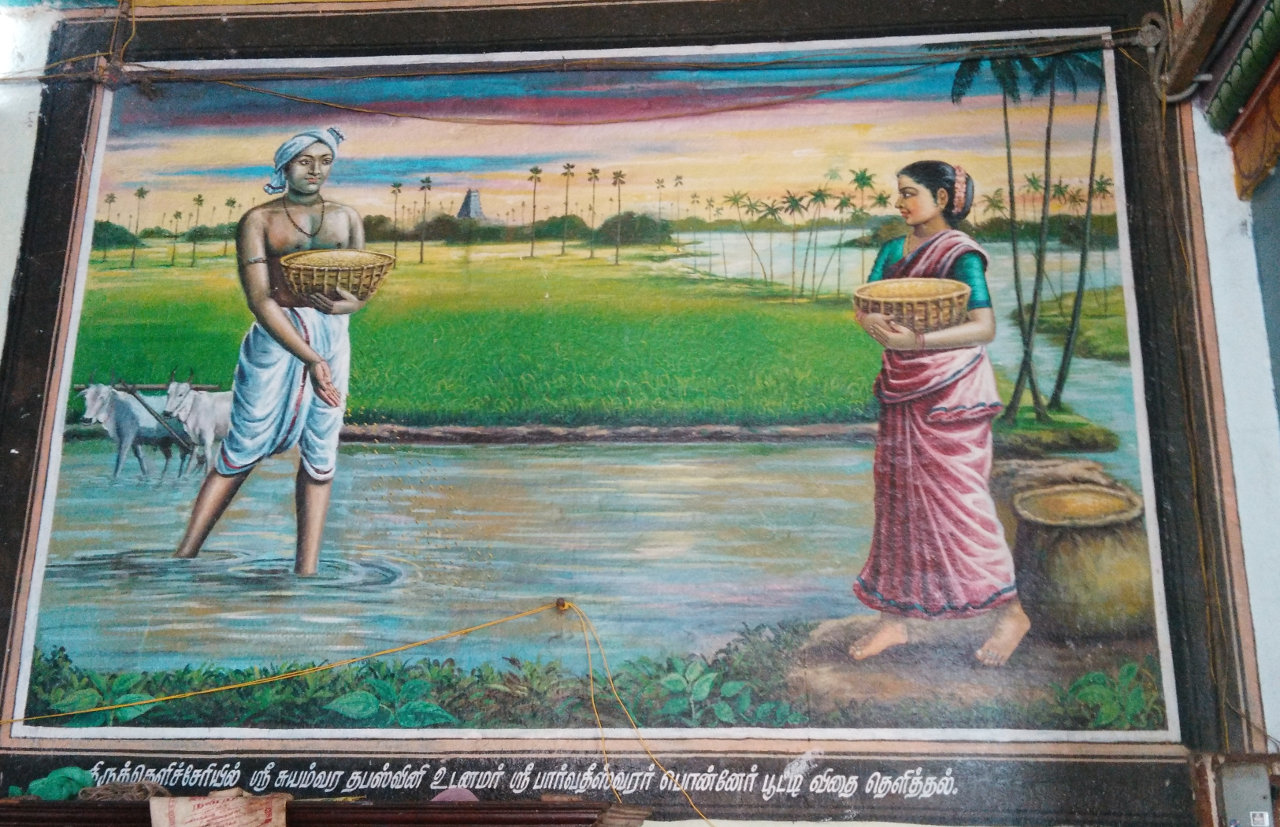 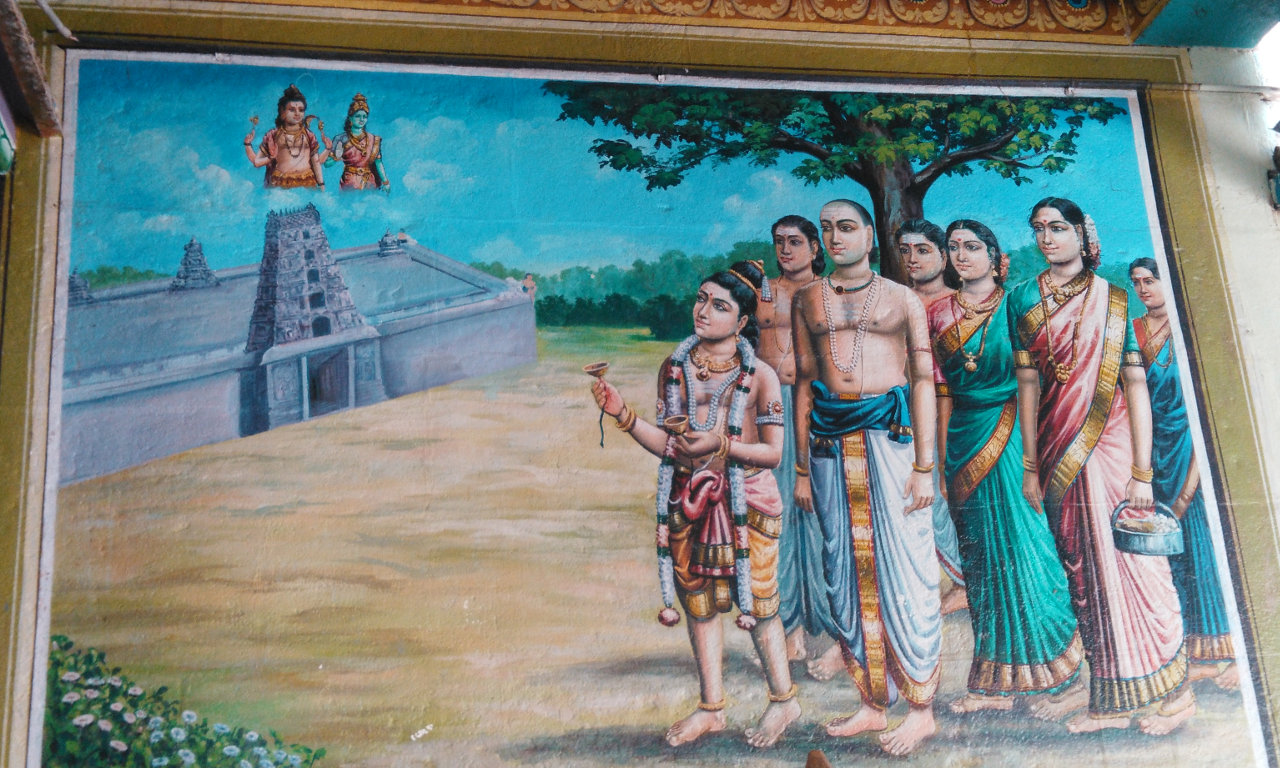 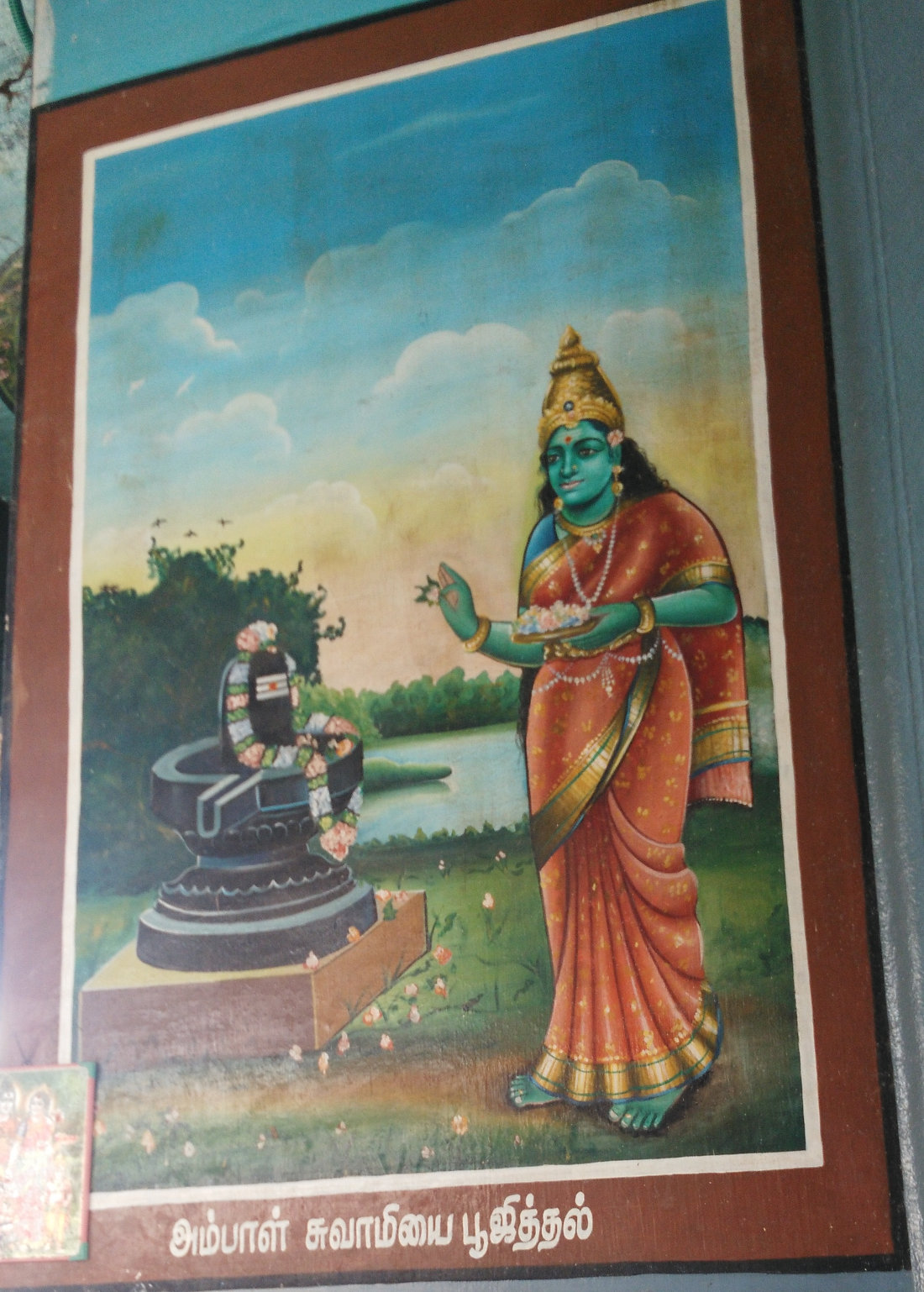 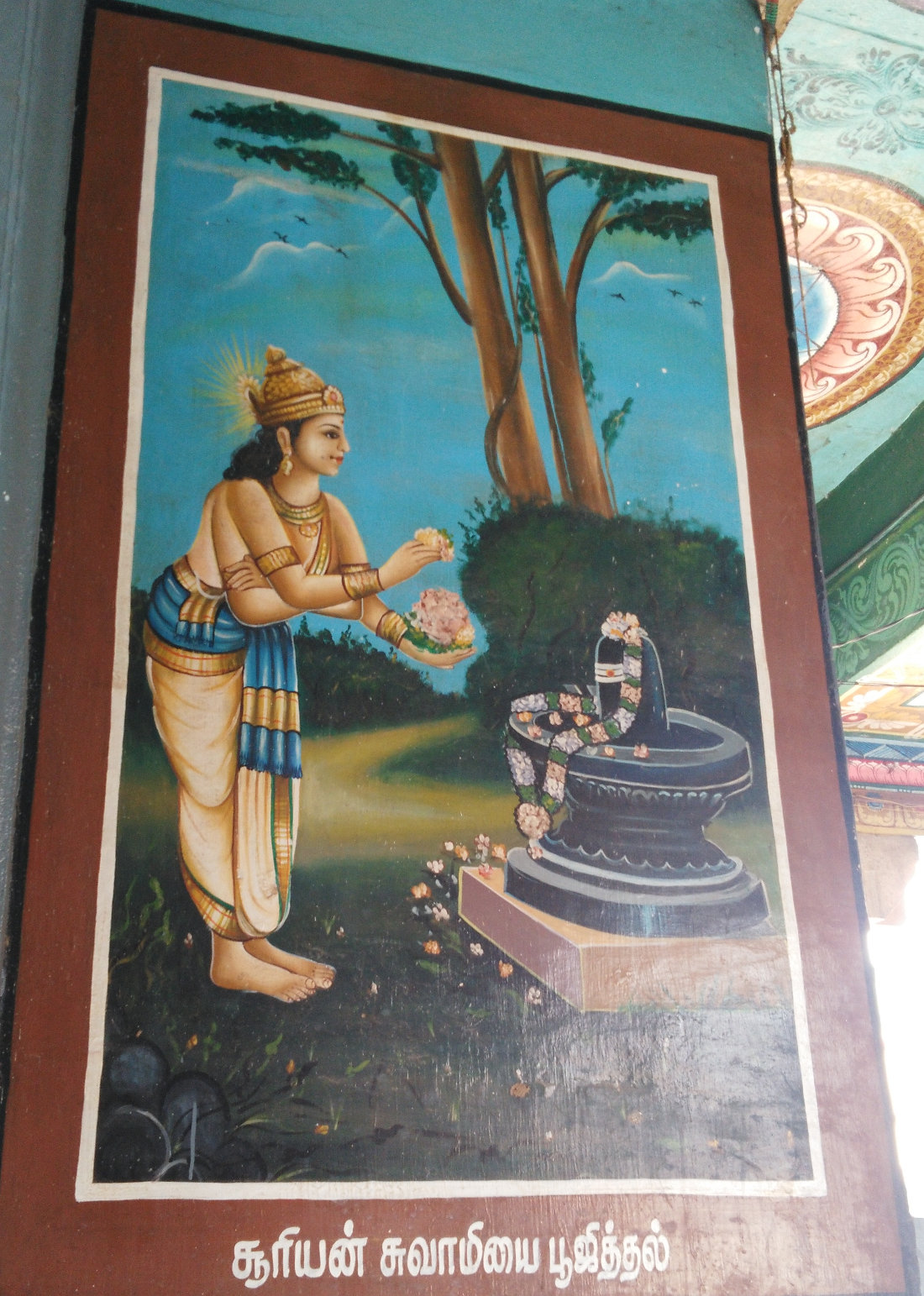 After worshipping Lord Dharbaranyeswarar in Thirunallaru, it is believed that Saint Thiruganasambanthar passed through this place without noticing this temple. Lord Vinayakar is then believed to have called the saint 10 times, made him turn back and visit this temple. As Vinayakar called the saint, he is praised as “Koovi Azhaitha Pillayar”. (“Koovi Azhaitha” means calling loudly in Tamil). This place was also referred to as “Koovi Azhaitha” but over a period of time it has changed to “Koil Pathu”.

When Saint Thirugnanasambanthar visited this place, he was intercepted at a place called Bodhimangai by some people belonging to other religions. They started harassing him and questioned the power of Lord Shiva. The saint appealed to Lord Shiva for a solution. It is believed that by the command of the lord, a thunder fell on them but they still argued that Saivism was not superior to their religion. They challenged Sambanthar to a debate. Sambanthar accepted the challenge and asked one of his disciples to attend the debate. The disciple alone defeated them. It is believed that they accepted their defeat and embraced Saivism.

Another legend associated with this place is that of Arjuna – Arjuna is believed to have visited this place and worshiped Lord Shiva. Lord Shiva blessed him with his darshan in the form of a hunter. Arjuna prayed to the lord that the lord and the theertham be named after him. Lord Shiva agreed to fulfil his wish, hence the lord is known as “Sri Phalguna Lingam” and the Theertham is known as Phalguna Theertham”.

It is believed that as advised by Sage Vashistar, a king called Ambarisha prayed to Lord Shiva here and was blessed with a child. Thus, the lord here is also known as “Sri Raja Lingam”.

There is also a separate shrine for Saneeswaran with his wife Renuka Devi in the corridors. 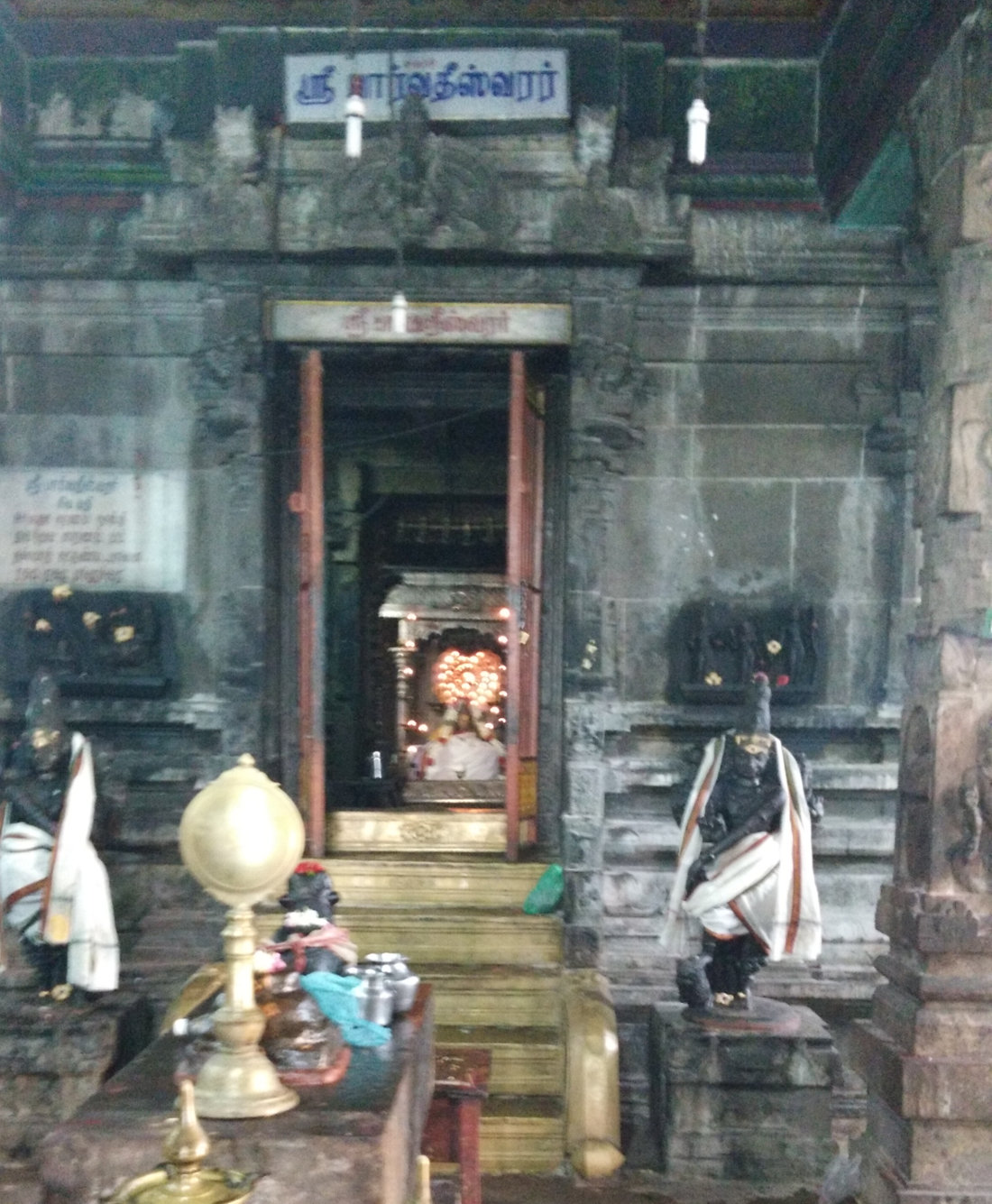 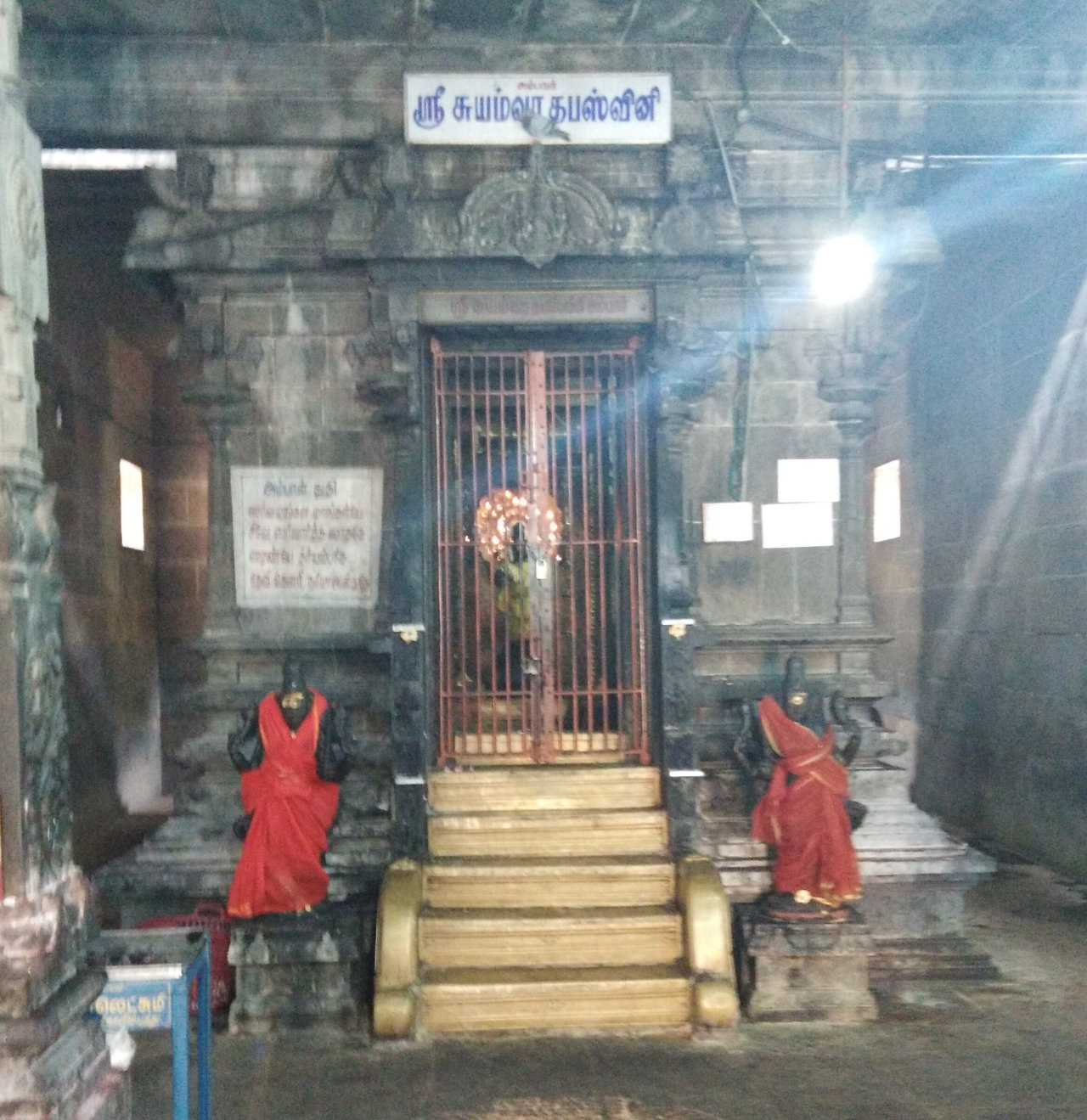 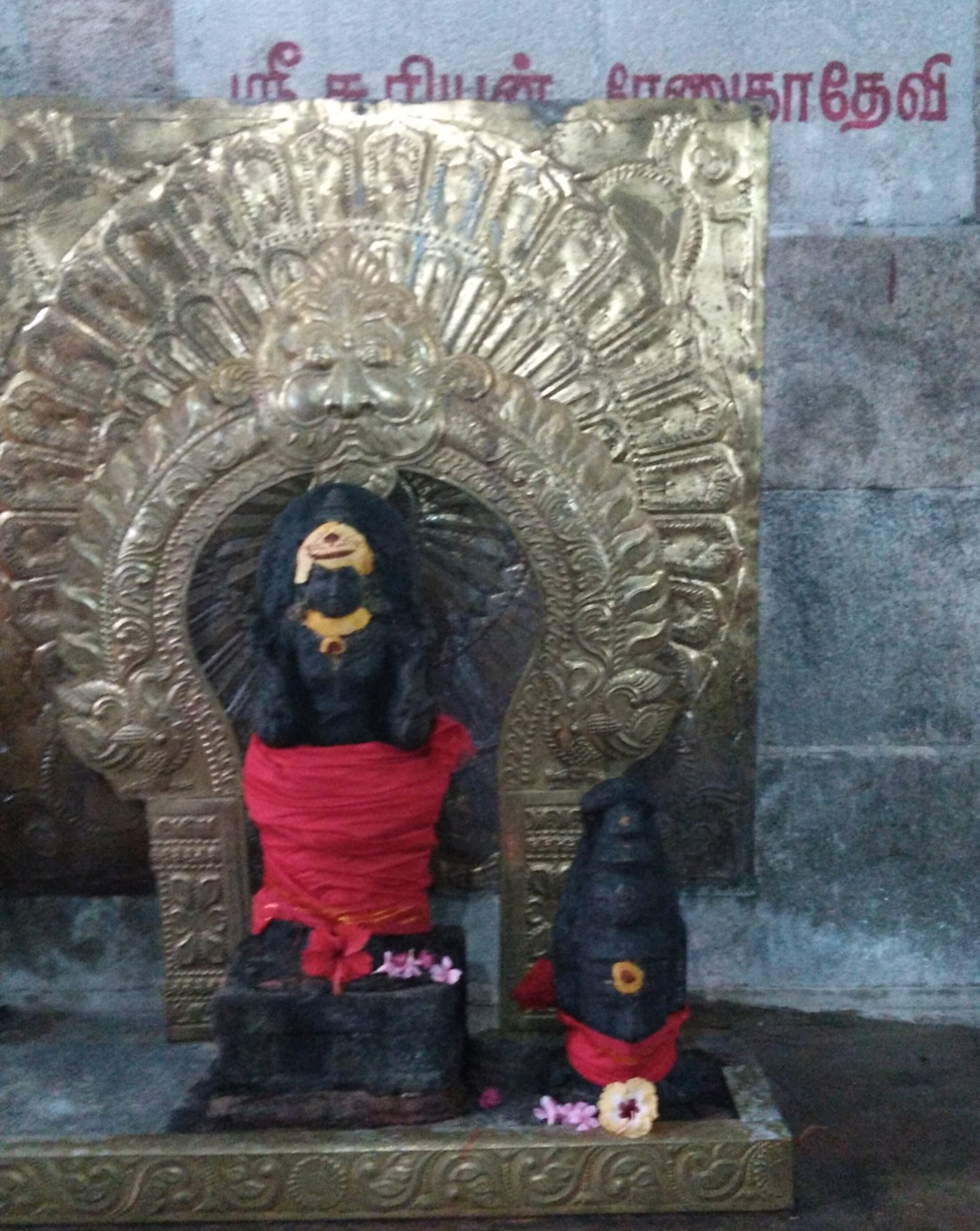 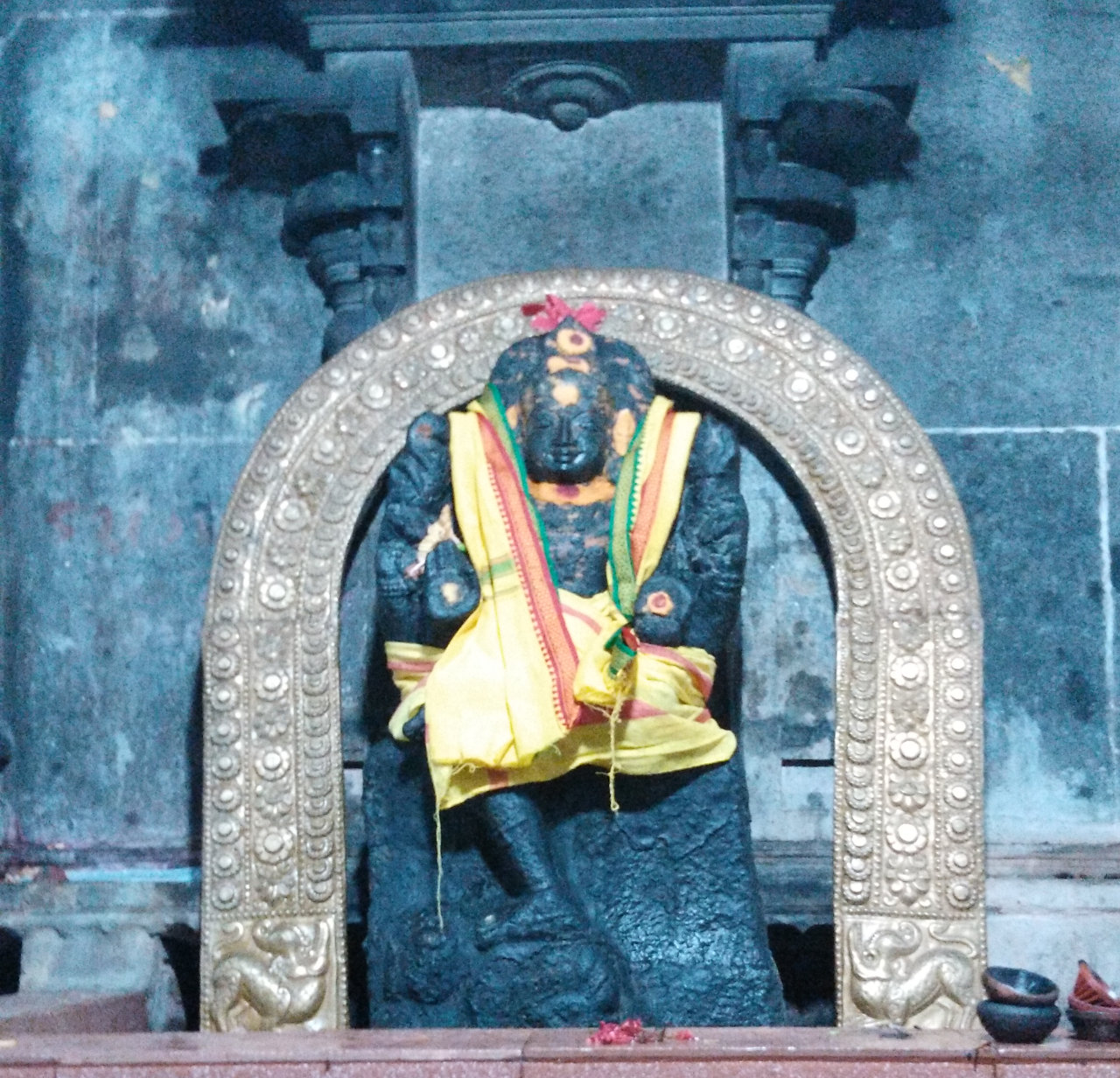 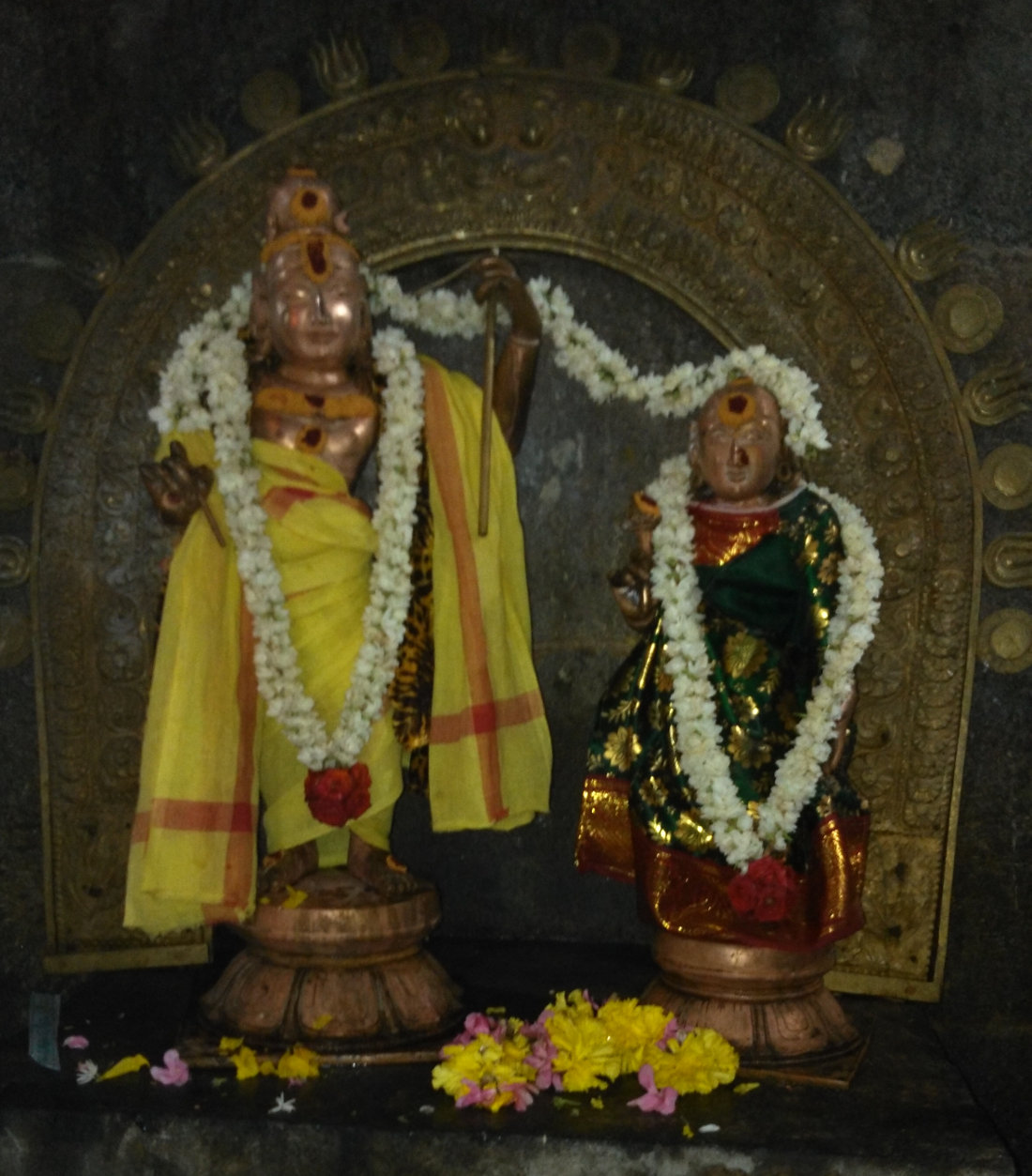 In this temple, there are some beautiful reliefs depicting the legends from “sthala puranam” like Goddess Parvathy worshiping the lord who can be seen in the form of a farmer; Lord Suryan and Saint Gnanasambanthar worshipping Lord Shiva and Goddess Parvathy.  There is another relief that depicts Arjuna worshiping Lord Shiva who is seen in the form of a hunter.

This is the birth place of Saint Karaikkal Ammaiyar and there is a separate temple for her in Karaikkal.  “Maangani Thiruvizha” is a very famous festival celebrated every year here. 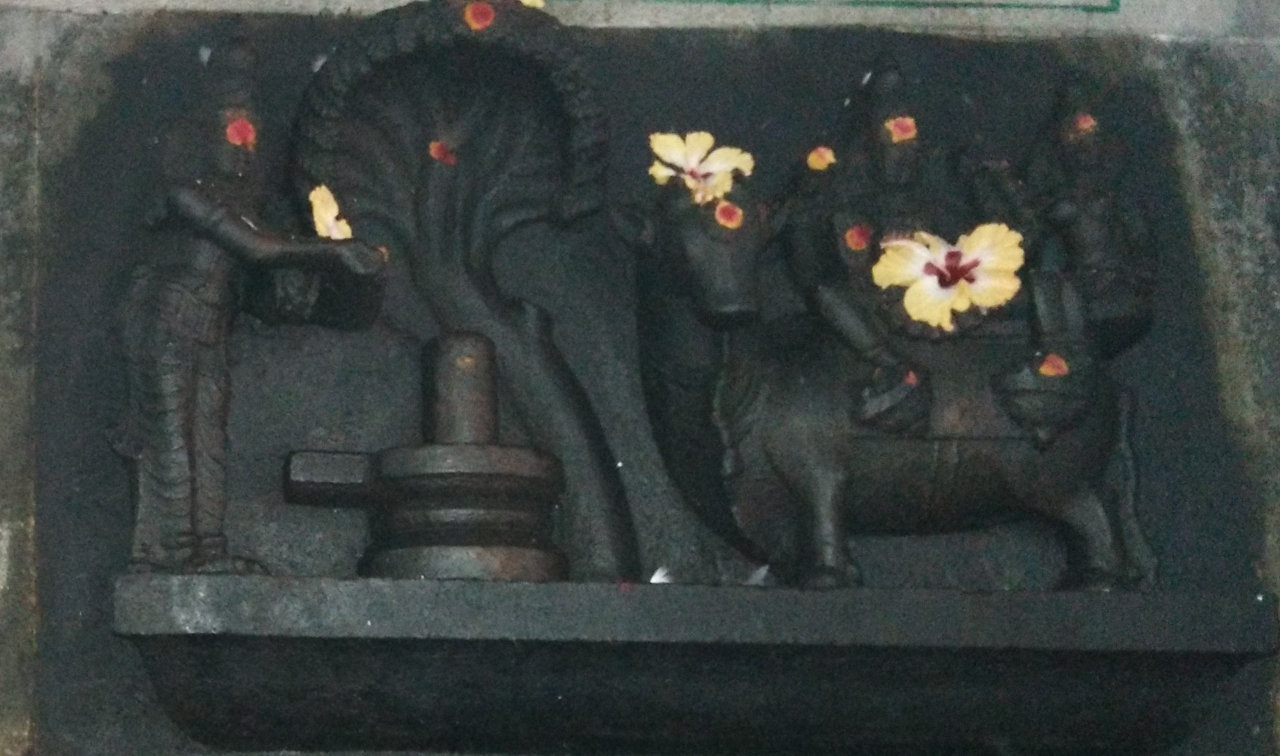 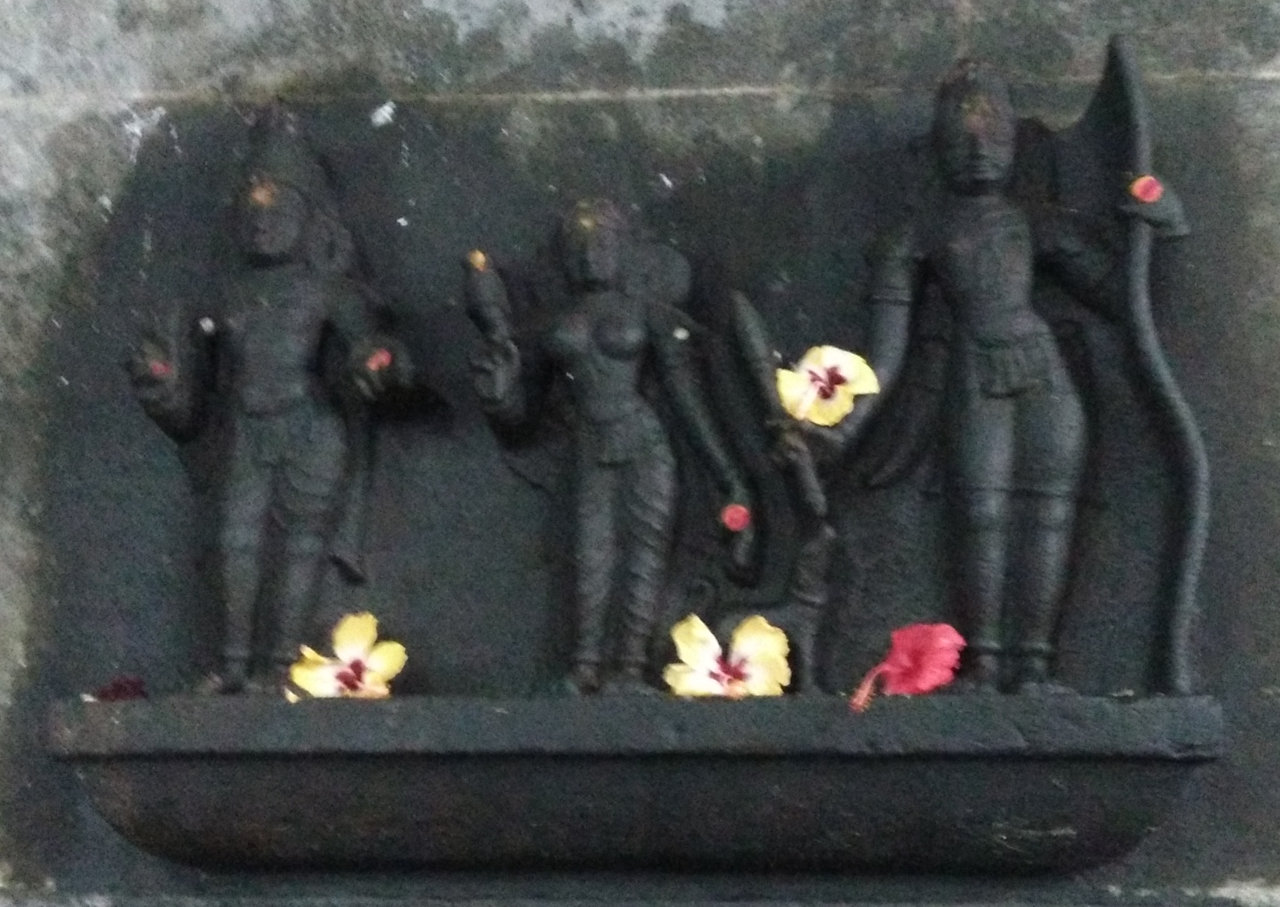 It is believed that those seeking “santhana prapthi” (child boon) can pray to Goddess Parvathy here.

Devotees can pray to Goddess Swayamvara Thapaswini here for removal of obstacles from their wedding proposals.

Paddy sowing festival in the Tamil month of Avani (August-September) is celebrated in a grand manner in this temple.

Other important festivals celebrated here are –

Maha Shivrathri in the Tamil month of Masi (Feb-Mar),

Thiruvadhirai in the Tamil month of Margazhi (Dec-Jan) and 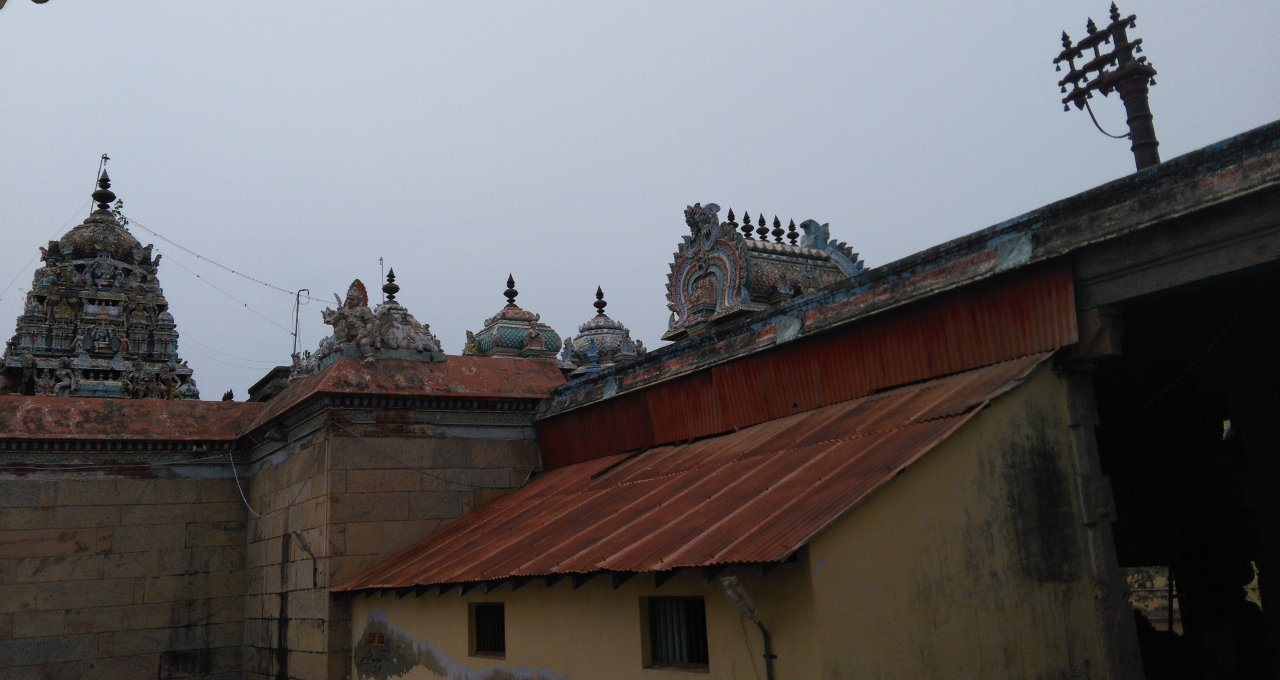 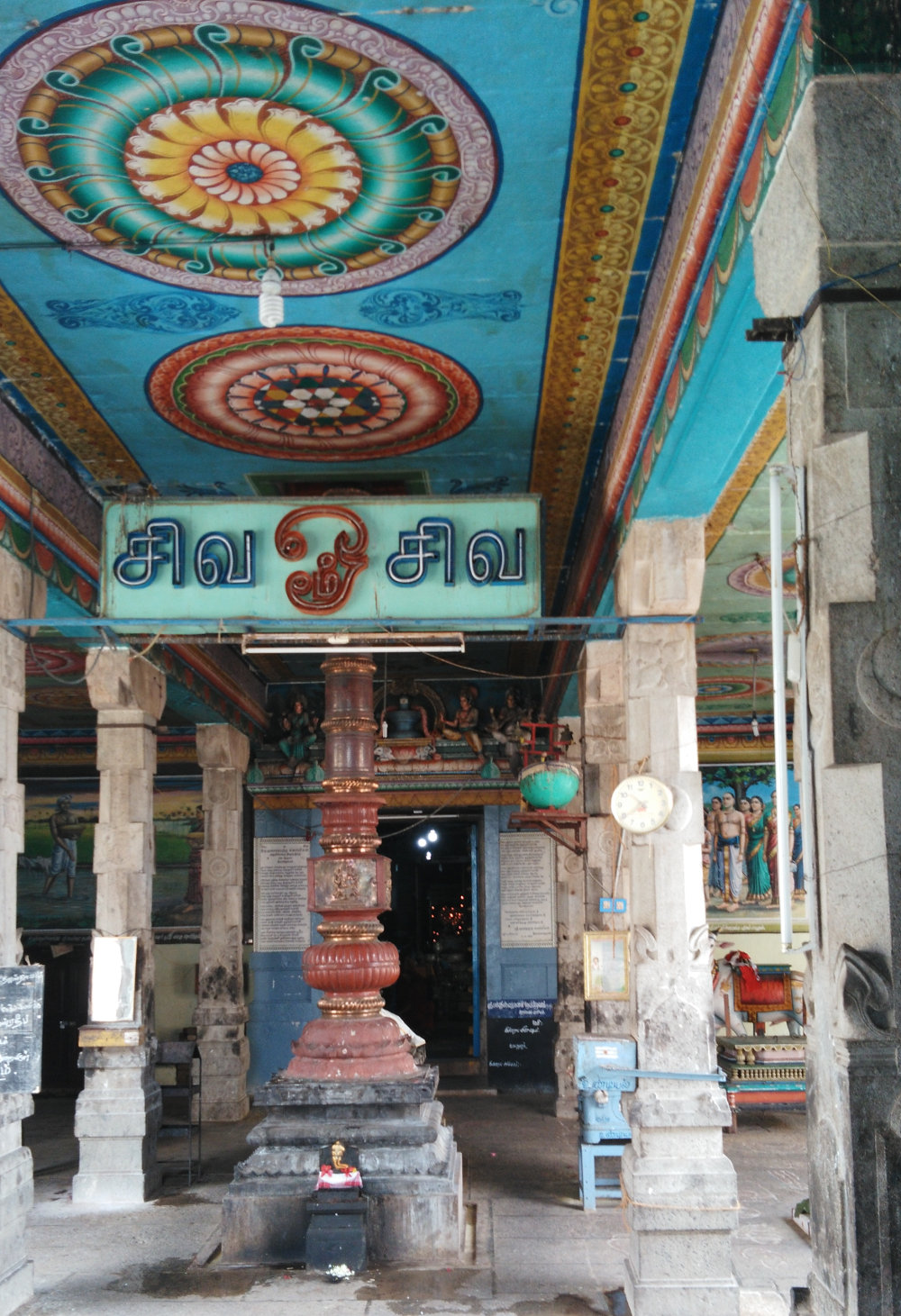 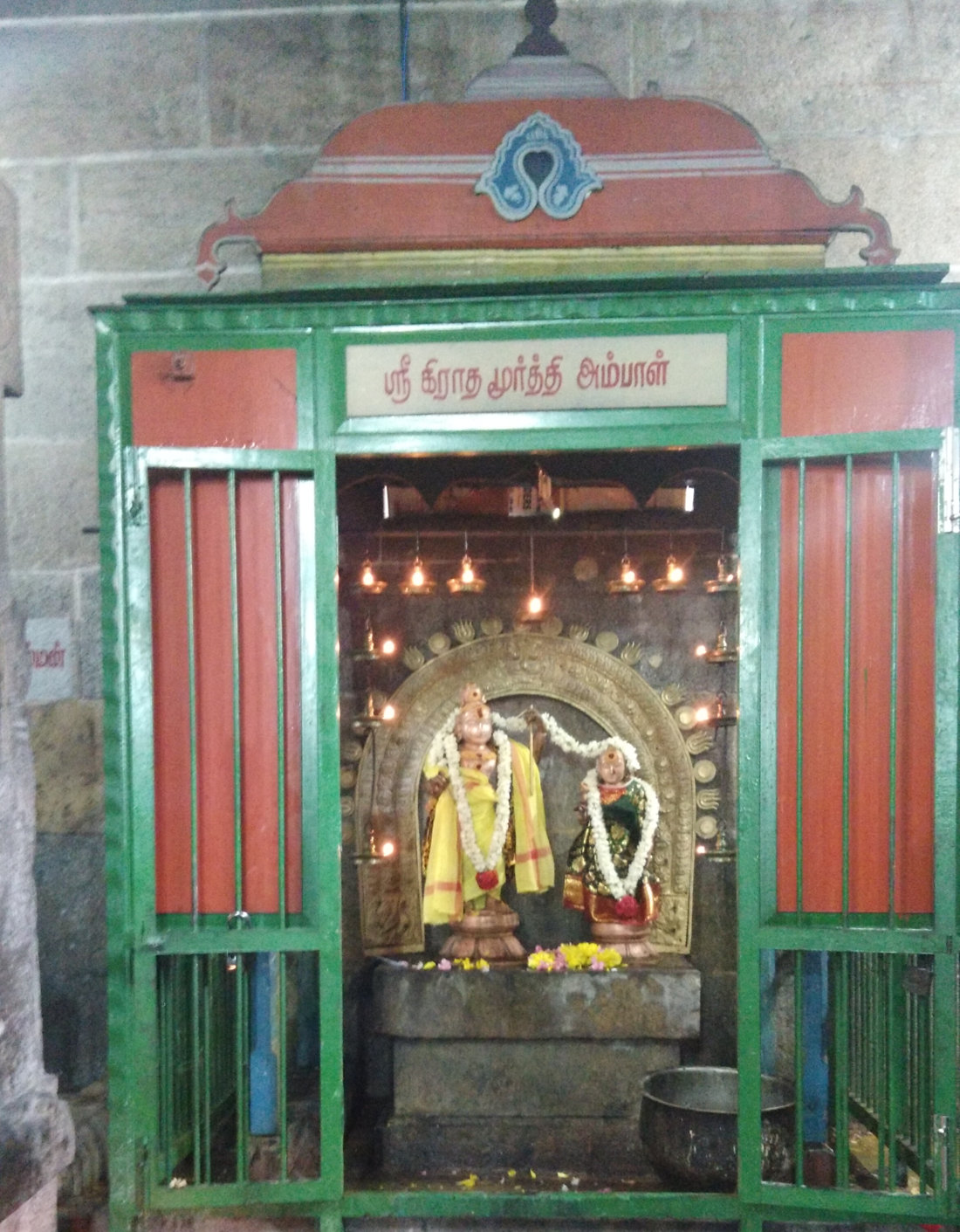