This ancient temple is situated on the northern banks of the river Arisilaru.

According to legend, in ancient times, this region was a forest densely covered with jackfruit, sandalwood, Shenbakam and Vila trees. This forest was called the “Veezhi” forest.

This ancient temple is believed to be more than 2000 years old. There are 68 stone inscriptions available in this temple which relate to the periods starting from the Chola King Kulothungan-I.

Now this temple is under the administrative control of Thiruvavaduthurai Aadheenam. 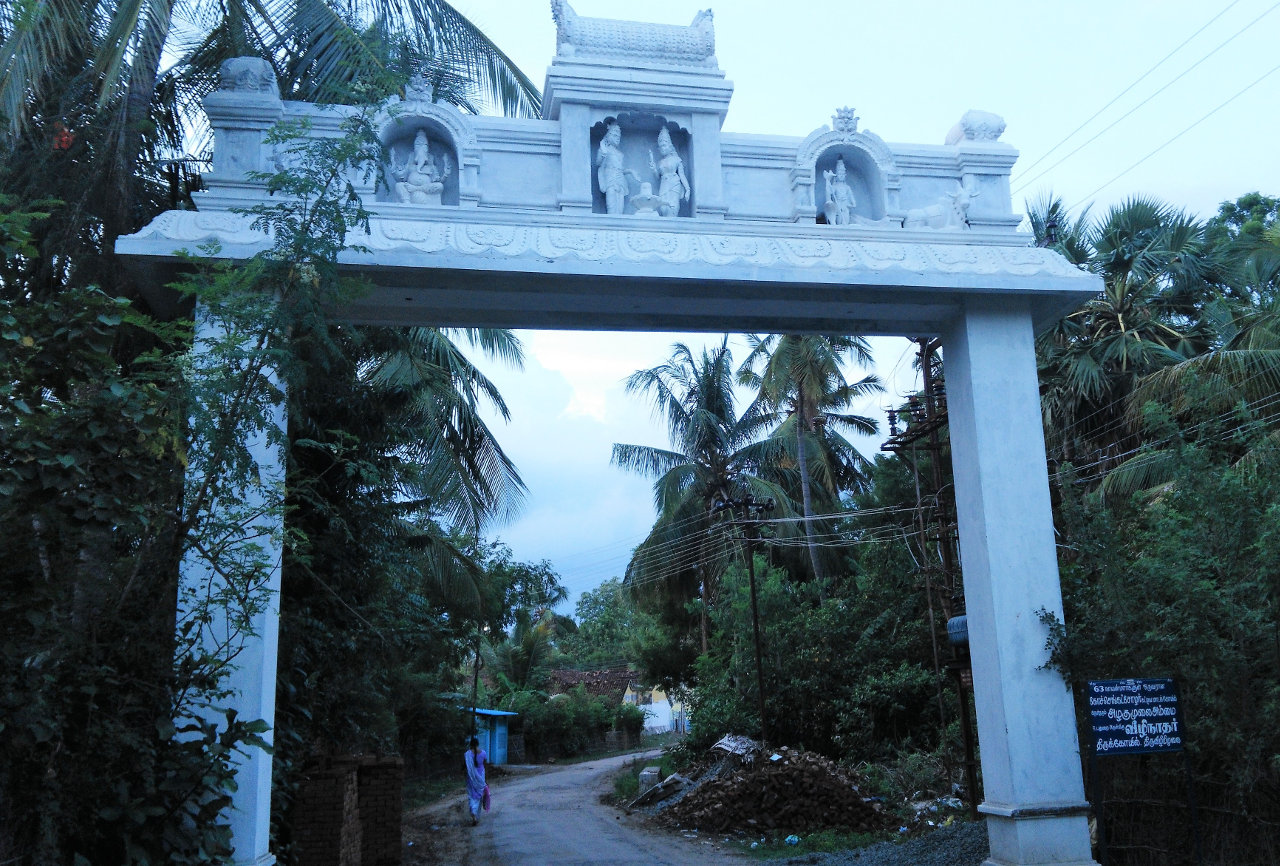 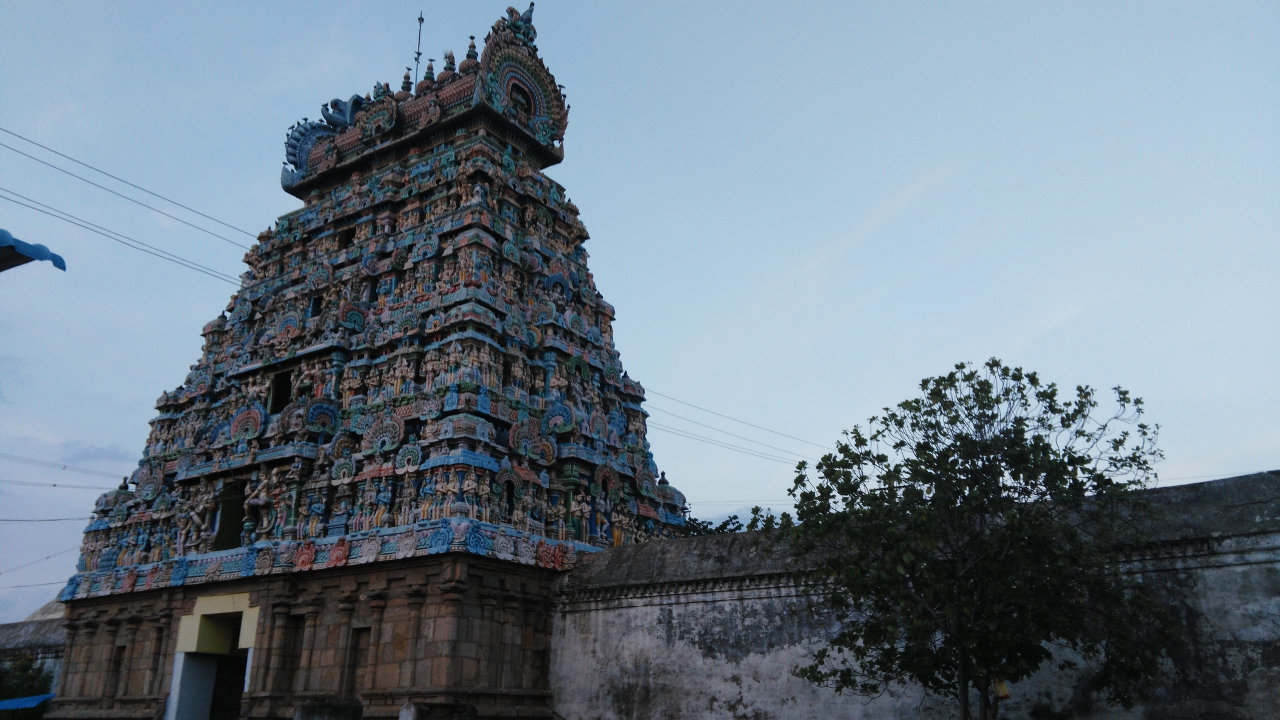 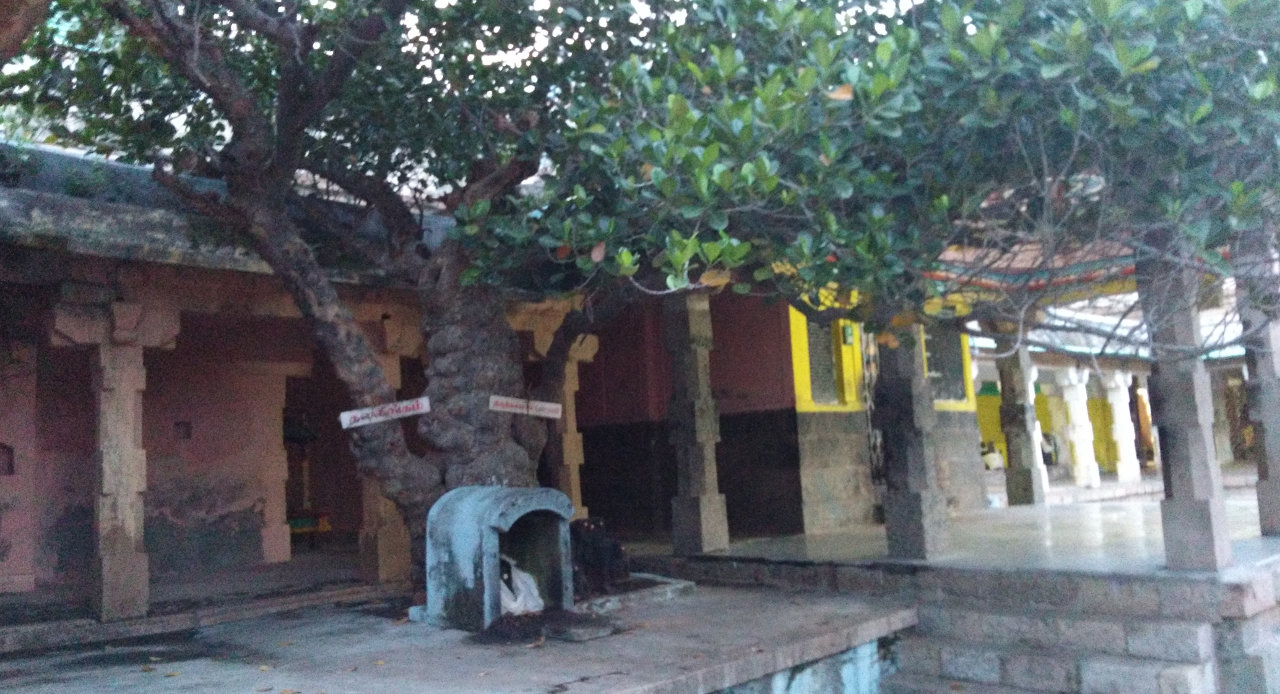 The legend is that Sage Kathyayana and his wife Sumangalai had performed rigorous penance here to obtain the blessings for a child. Pleased with their penance, Goddess Parvathi herself was born to them. She was named “Karthyayini”. When she grew up and attained the marriageable age, the sage prayed to Lord Shiva that he help him find a suitable groom for her. Responding to his prayers, Lord Shiva appeared and told him that he would marry his daughter on the “Magam” star day in the Tamil month of Chithirai (April-May). The lord further told the sage that his daughter is none other than Goddess Parvathy herself. As told by Lord Shiva, their wedding took place here. The sanctum resembles a “Kalyana Mandapam” (marriage hall) with two pillars – one is said to be “Arasanikkal” and the other “Panthakkal”. This form of sanctum cannot be seen anywhere else. The sage requested the lord to stay back in this temple in their wedding form and grant darshan to all the devotees. Since then it is believed that the lord can be seen in the sanctum sanctorum in their wedding form.

The idols of Lord Shiva and Goddess Parvathy that are placed behind the main lingam are very special as both of them are in a human form with a height of about 12 feet. The lord is known as Sri Kalyanasundarar and is also colloquially called as “Mappillai Swamy” (“Mappillai” means groom in Tamil). The inner tower is in the shape of a chariot with Lord Indra as the driver and Lord Shiva seated behind as the groom. 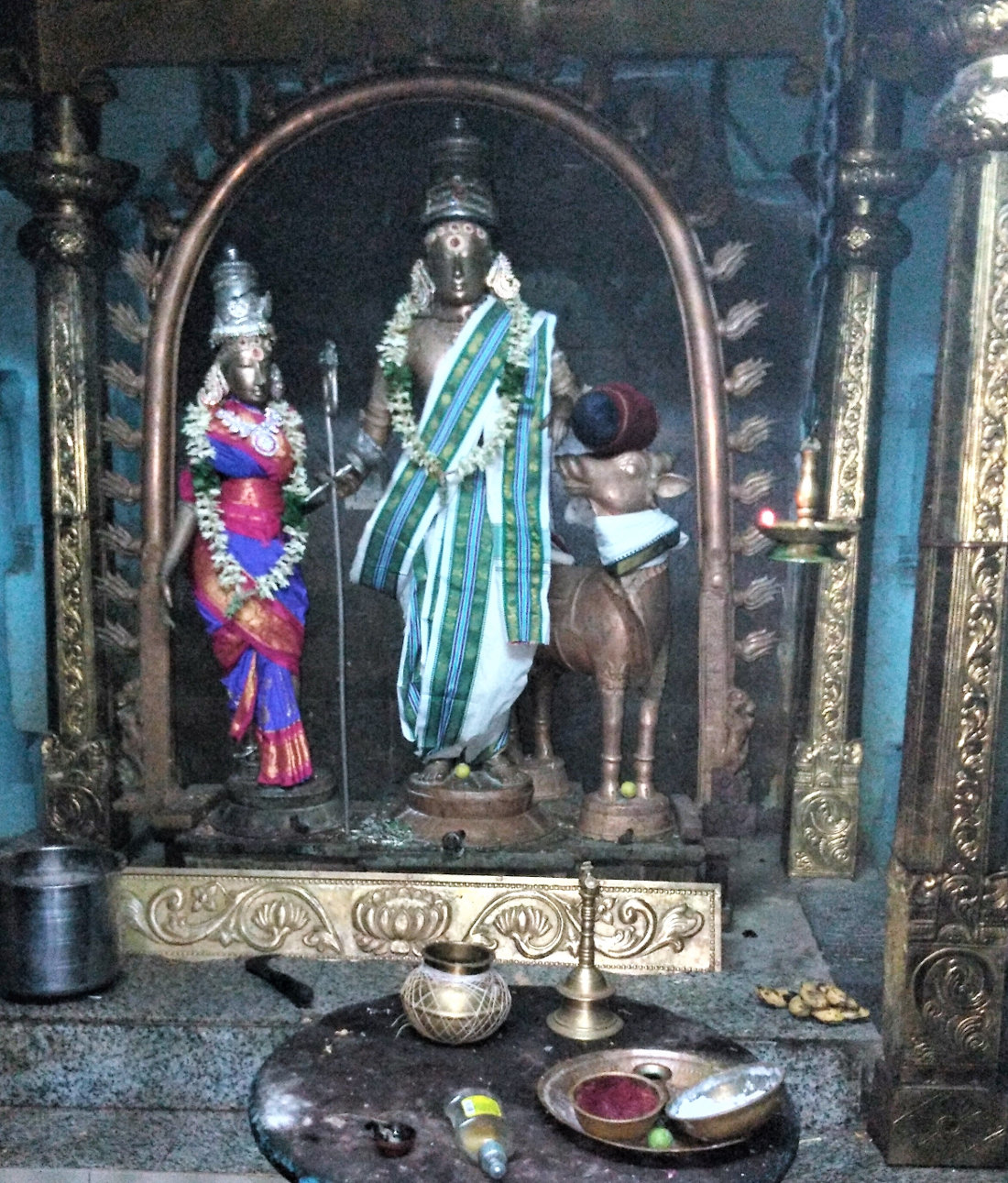 Another legend is that Lord Mahavishnu is said to have been blessed with his “Discus” (Chakrayudam) upon worshipping Lord Shiva in this temple. It is believed that in his battle against Sage Thatheesi, Lord Mahavishnu had used his discus. When the discus touched the sage’s body, it lost its sharpness and became defunct. Worried, Lord Mahavishnu consulted with the celestial gods (Devas) who advised him that Lord Shiva had the “Sudharsana Chakram” (discus) which he had created to destroy demon Chalandaran. Lord Mahavishnu came to this place (Thiruveezhimizhalai) carrying a sanctum tower (“Vinnizhi Vimanam”) with him. He placed the idol of Lord Shiva inside it and worshipped him every day by making an offering of a thousand lotus flowers.

To test Lord Vishnu’s determination, it is believed that one day, Lord Shiva caused the shortage of one flower. To make up for this shortage, Lord Vishnu immediately plucked out one of his eyes out and offered it along with the flowers. Pleased by his devotion, Lord Shiva restored Lord Mahavishnu’s eye and blessed him with the “Sudharsana Chakram”. Lord Shiva also named Lord Mahavishnu as “Kamalakkannan” (“Kamalam” means lotus in Tamil).

Another legend is that when Thirunavukkarasar (Appar) and Thirugnanasambanthar visited this place together, there was a severe drought in this area. They prayed to Lord Shiva who gave one Padikasu (“Padi” means allowance and “Kasu” means Gold coin in Tamil) every day to both of them. This was done so that they could usethe Padikasu for offering food to the needy people. Sambanthar got his padikasu at the Peedam in front hall (Mahamandapam) near the flag post whereas Appar got his padikasu from the Peedam at the west side corridor. 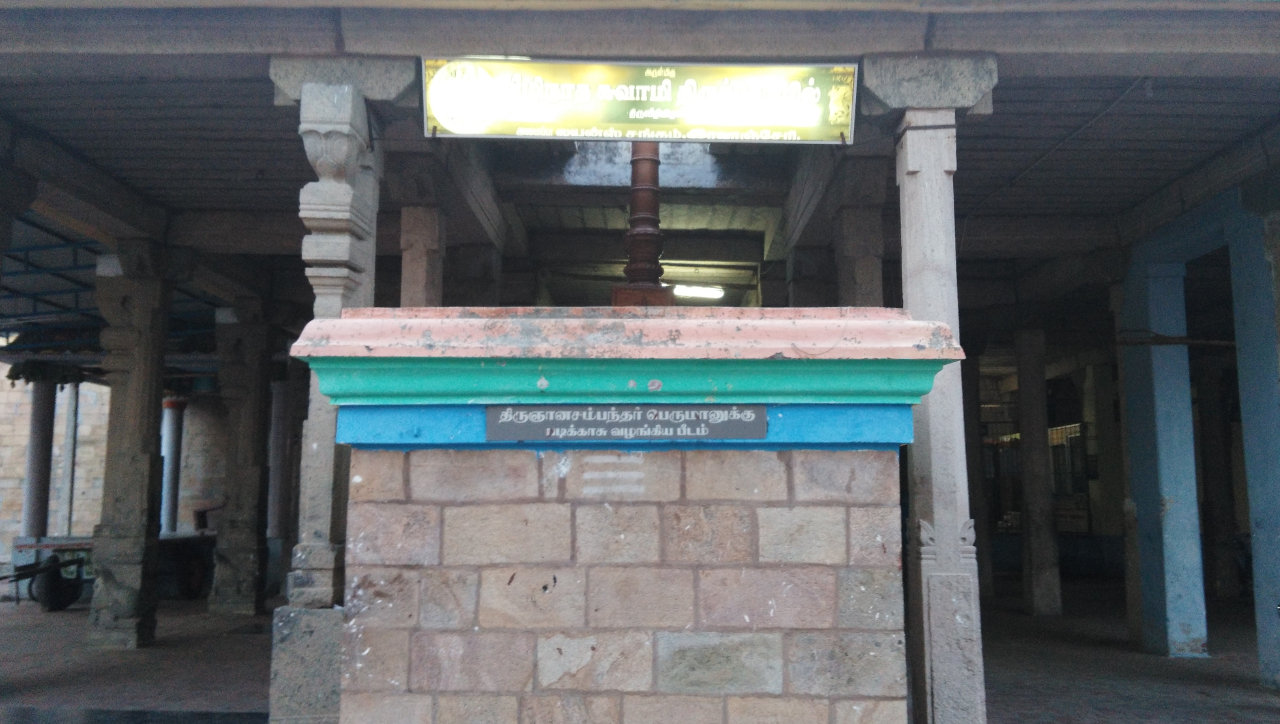 However, the gold that Sambanthar received had less purity when compared to the gold that Appar got. So Sambanthar prayed to the lord that he also be given the same quality of gold so that he could feed his followers properly. This can be inferred from his hymn which starts with the line “Vasi theerave kaasu nalkuveer….. ”.  Since it was a play of the lord, after Sambanthar’s hymn, he also started getting good quality gold coins.

It is also believed that Lord Shiva granted his darshan as “Sirkazhi Thoniyappar” to Saint Thirugnanasambanthar from this temple’s sanctum tower “Vinnizhi Vimanam”.

Another legend is that one hunter by name of Mizhalai Kurumbar visited this temple and worshiped the lord here by offering “Vilam” fruits every day. Pleased with his devotion, it is believed that Lord Shiva blessed him with his dharisanam and taught him the 8 great lessons called “Ashtamasiddhi”. Kurumbar then performed rigorous penance here for a long time and attained the status of a “Sidhar”. There is a separate shrine for him in the corridors. This village gets the name “Thiruveezhimizhalai” (“Veezhi” the forest name and “Mizhalai” the hunter’s name) and the lord here is also praised as “Sri Veezhi Nathar”.

Another legend associated with this temple is that of Swedakethu, a king from the north. His court astrologers had informed him that his life span was very short (18 years only). Swedakethu took advice from various sages who had suggested him to go to Thiruveezhimizhalai and worship Lord Shiva. It is believed that he was saved from Yama by Lord Shiva. In this temple, there is an idol of “Sri Kalasamharamurthy” like in Thirukkadaiyur where Sage Markandeya was saved from Yama.

It is also believed that Sage Vashistar, Kamadenu, Rathi Devi and king Manu have worshiped the lord here.

The procession idol of Lord Kalyanasundareswarar can be seen with Lord Mahavishnu offering his eye. 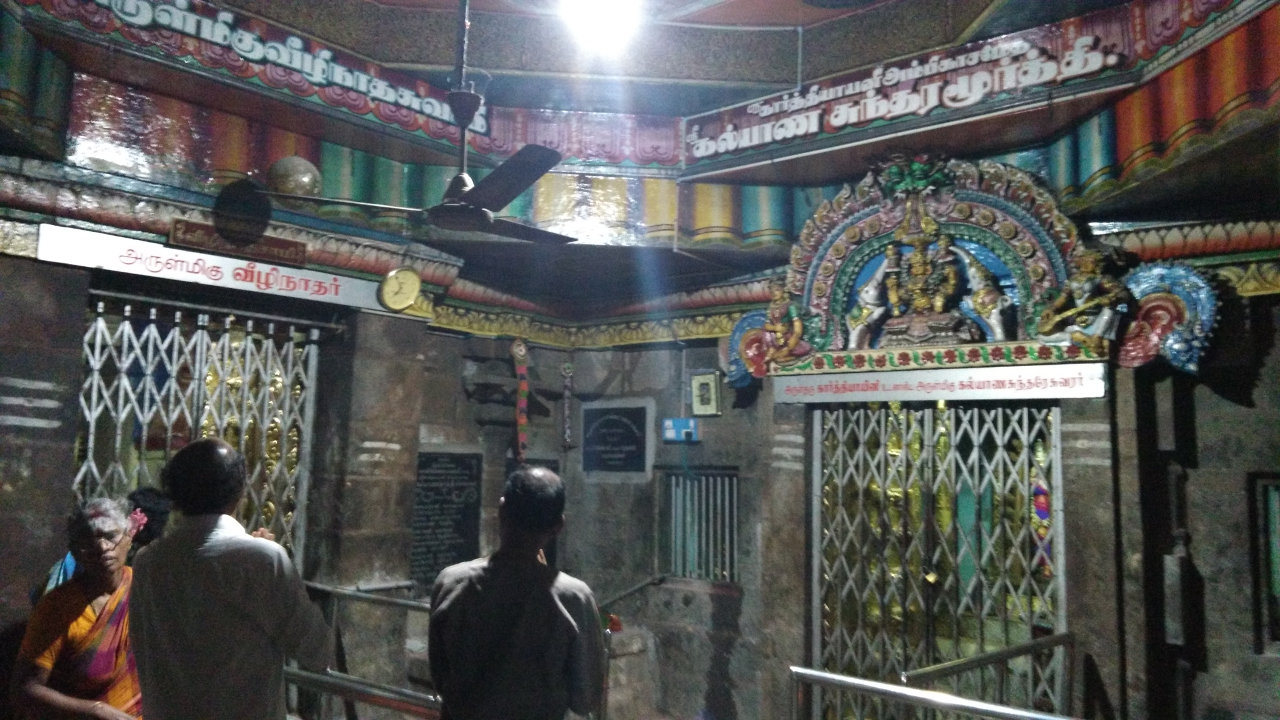 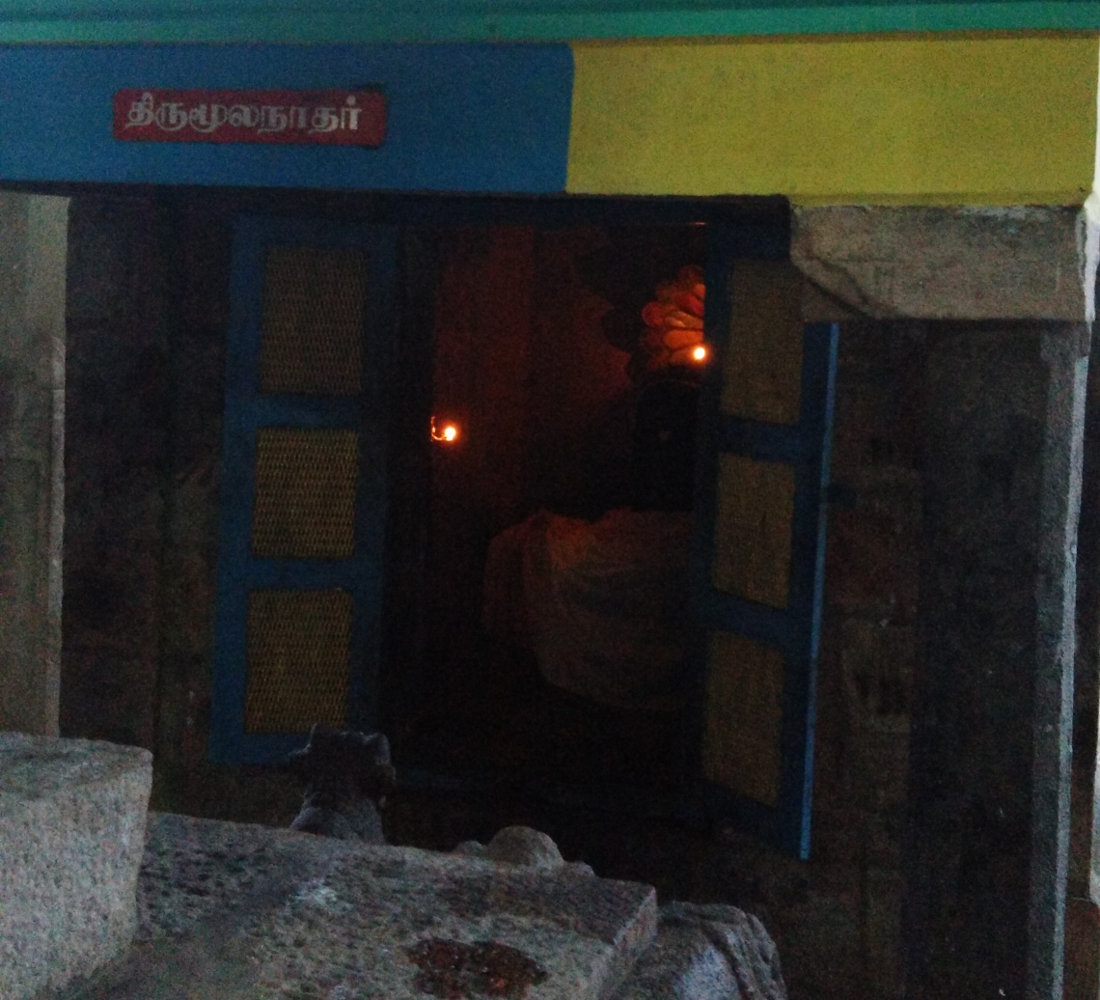 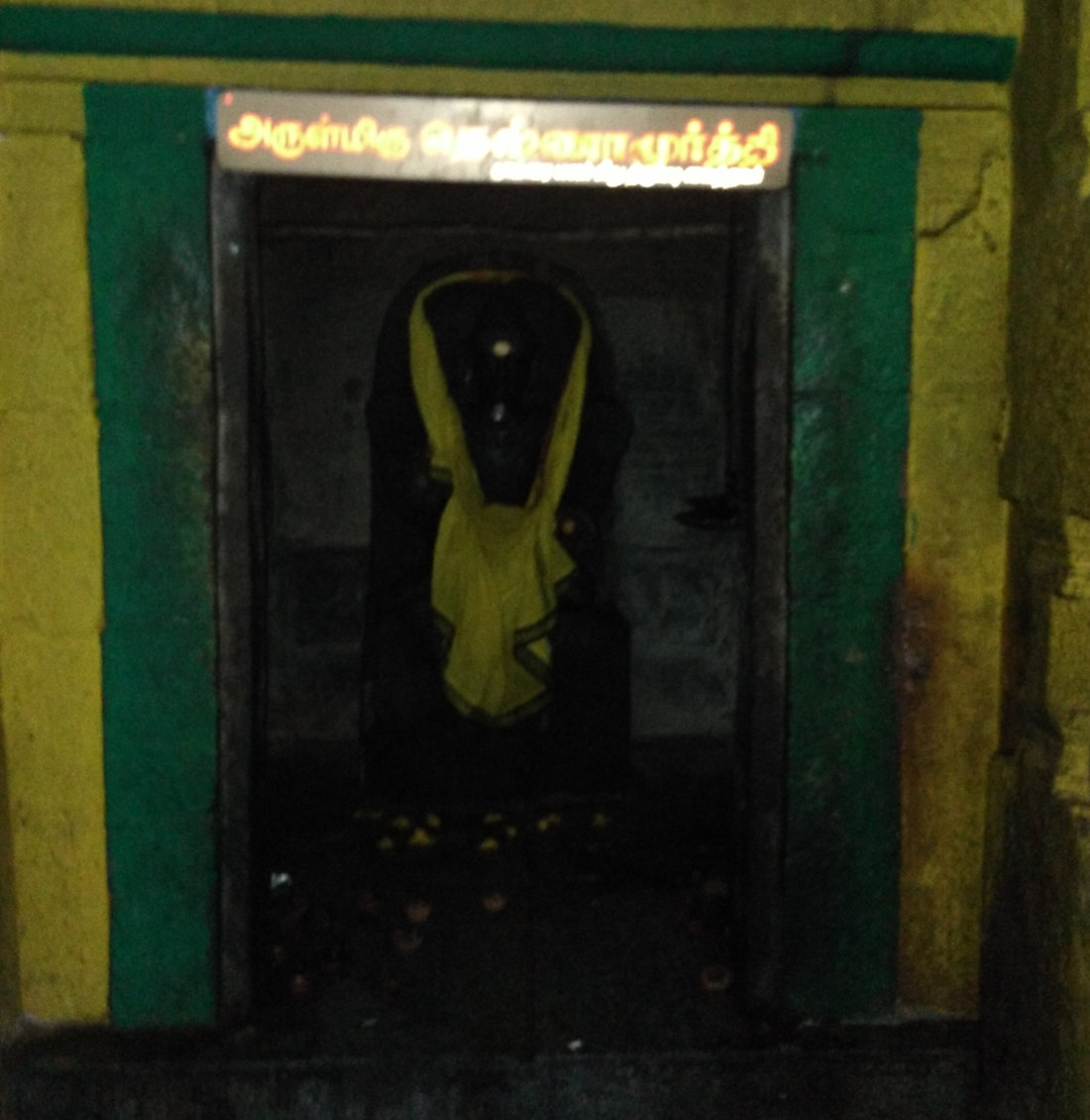 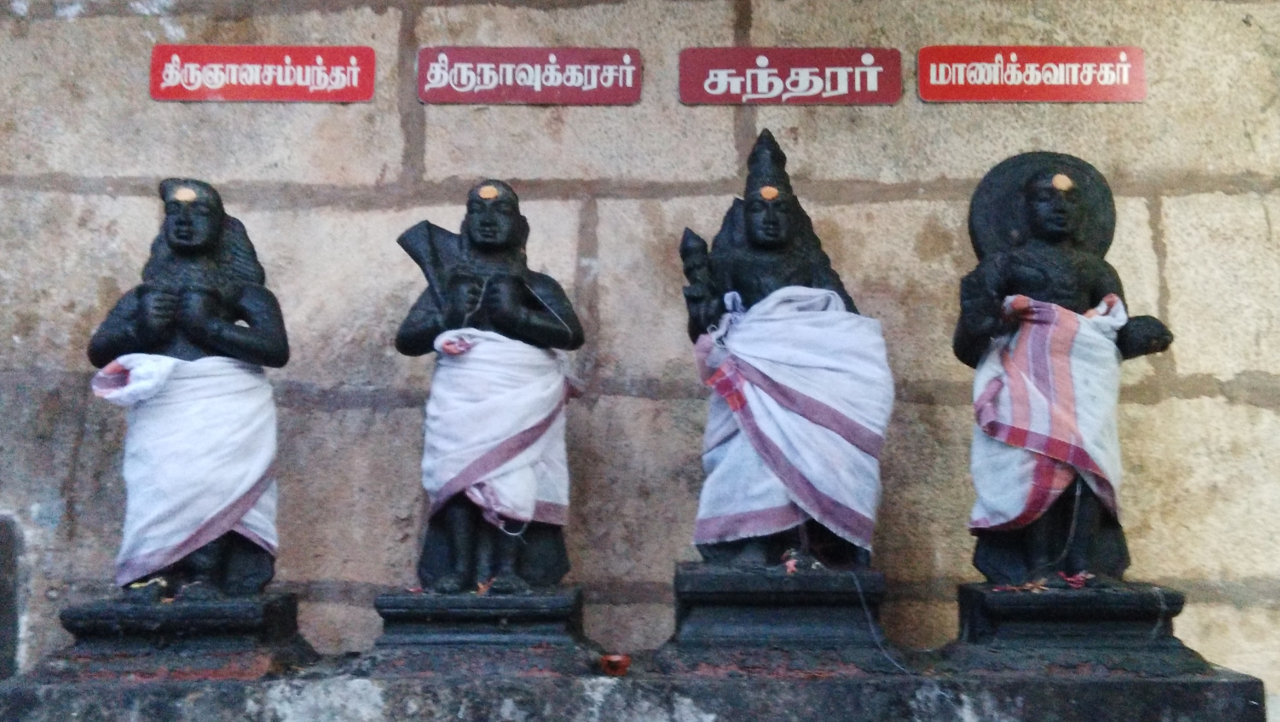 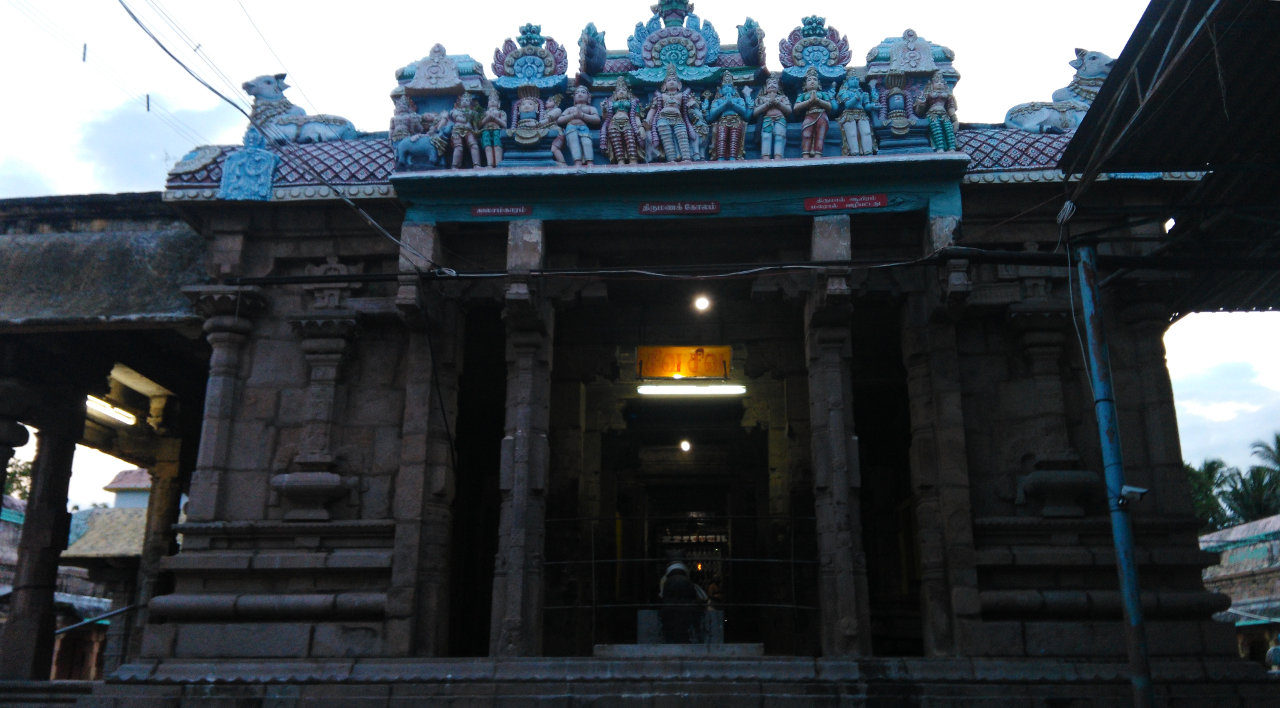 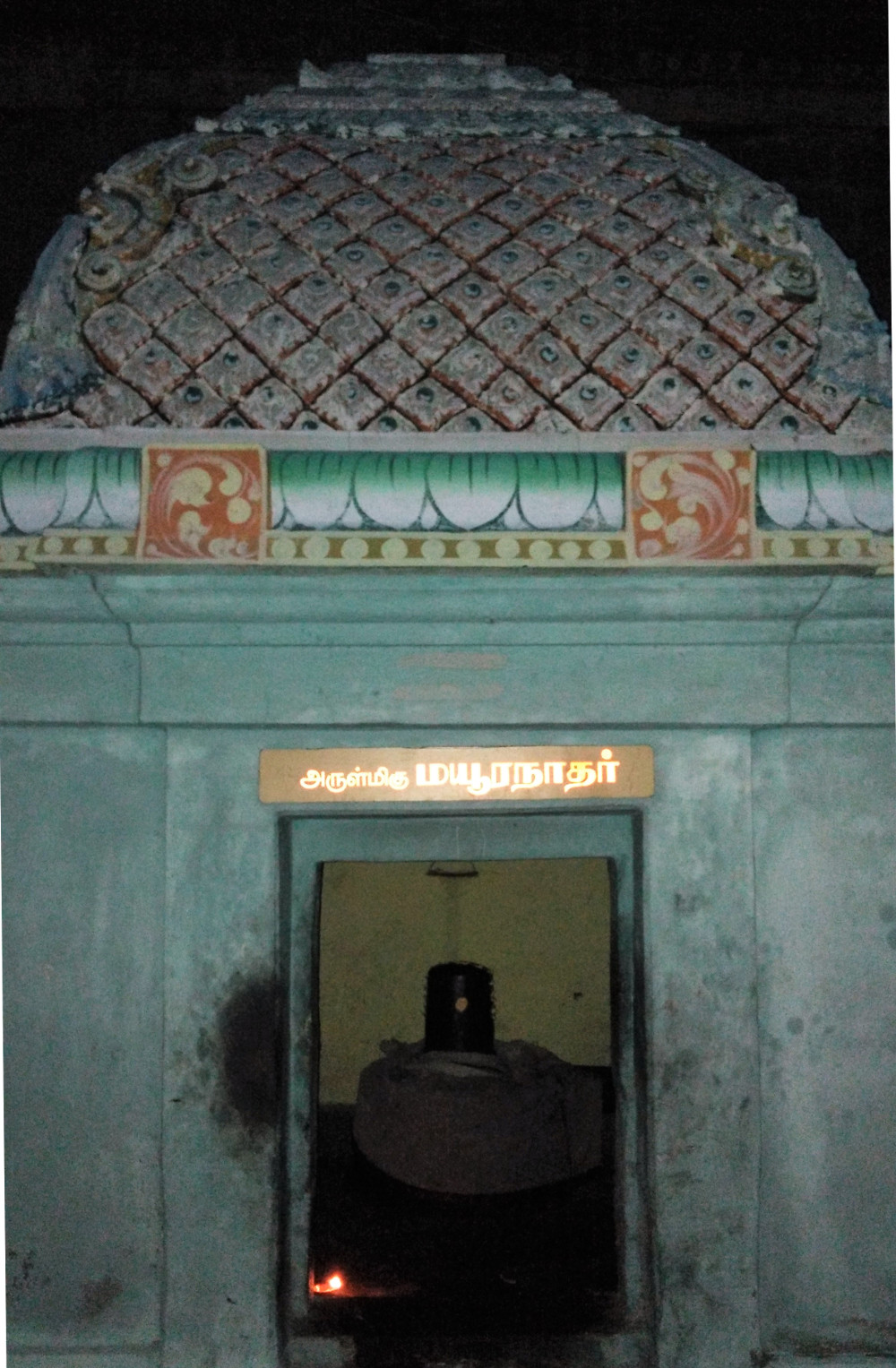 This temple is built like a fortress. It has a huge temple tank and there are many other special structures to see here such as the halls, sculptures and towers. It also looks like a “Madakkovil”, i.e., from the floor level, one has to climb a few steps to reach the sanctum.

The sanctum sanctorum’s tower looks very beautiful. It is sculpted in such a way that it looks as if 16 lions are holding it. This is known as “Vinnazhi Vimanam” which is believed to have been brought from the celestial world by Lord Mahavishnu. 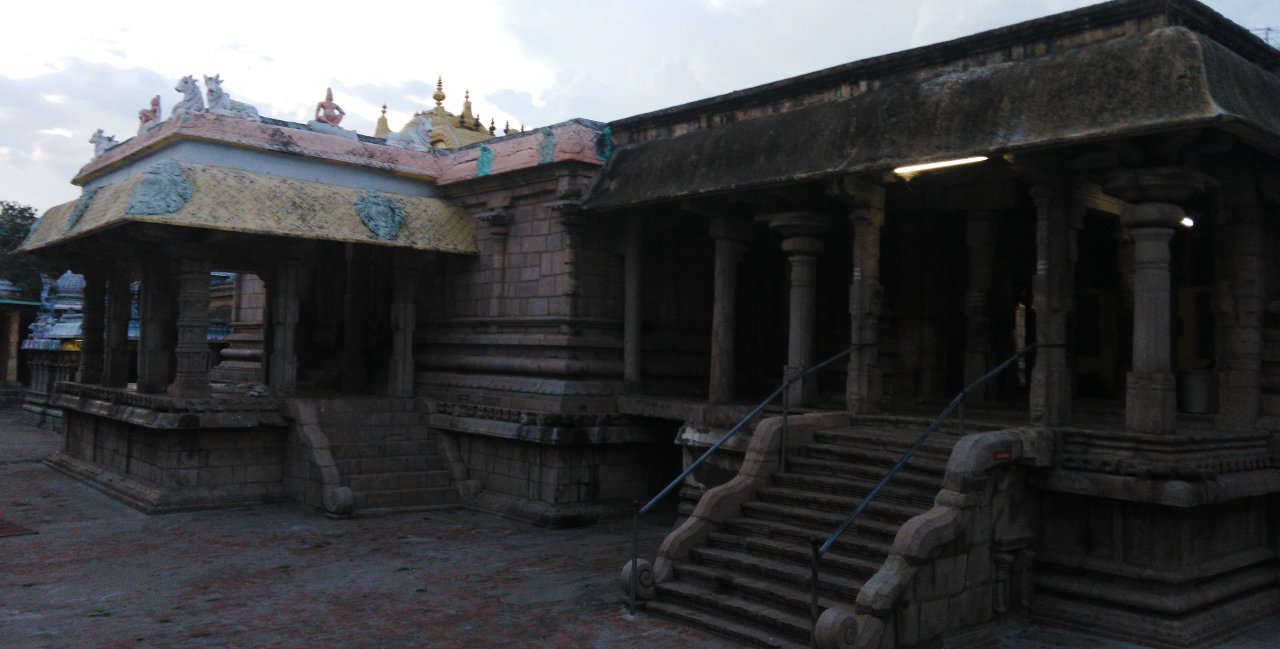 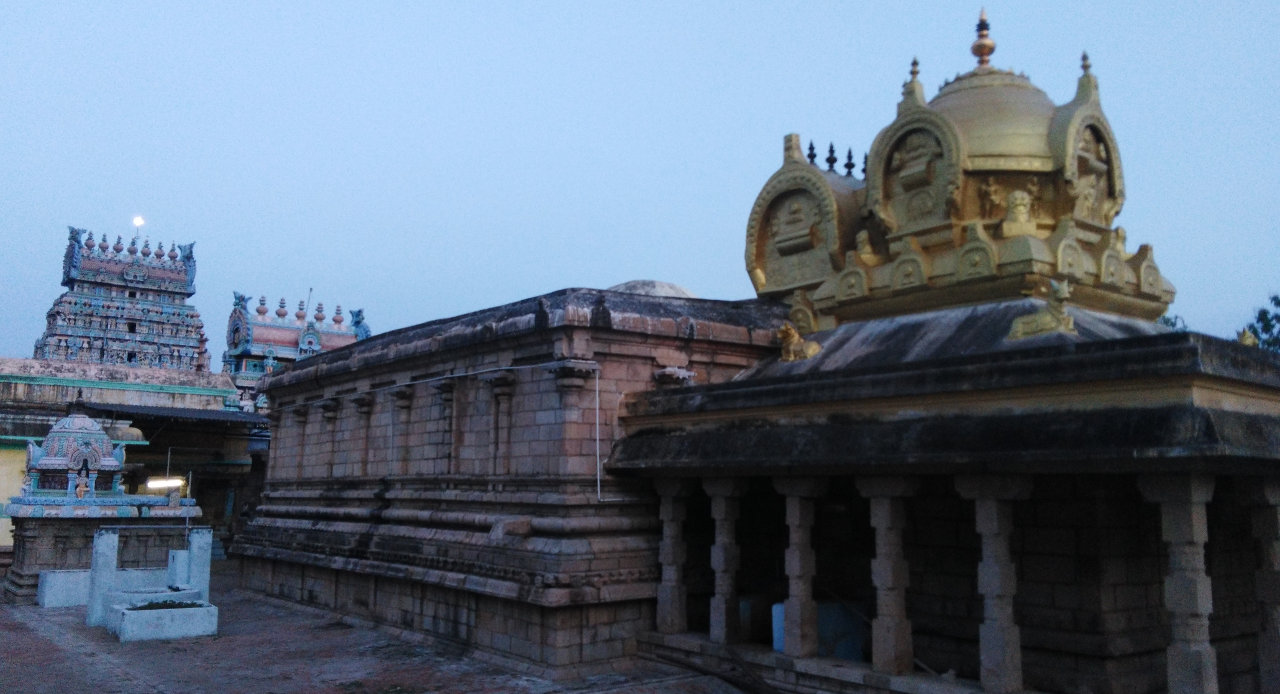 It is believed that there are six places where one can get relief from the fear of death (Lord Yama being the lord of death). These are – Thirukkadayur, Thiruveezhimizhalai (this place), Thiruvaiyaru, Thiruvenkadu, Thiruvaikavur and Thiruvanchiyam.

There is a separate shrine for Nandhi which is located under the ground level to one side of the sanctum. It is called “Padhala Nandhi”.

There is a hole in the wall of the sanctum through which a parrot is believed to come every day to worship the lord. 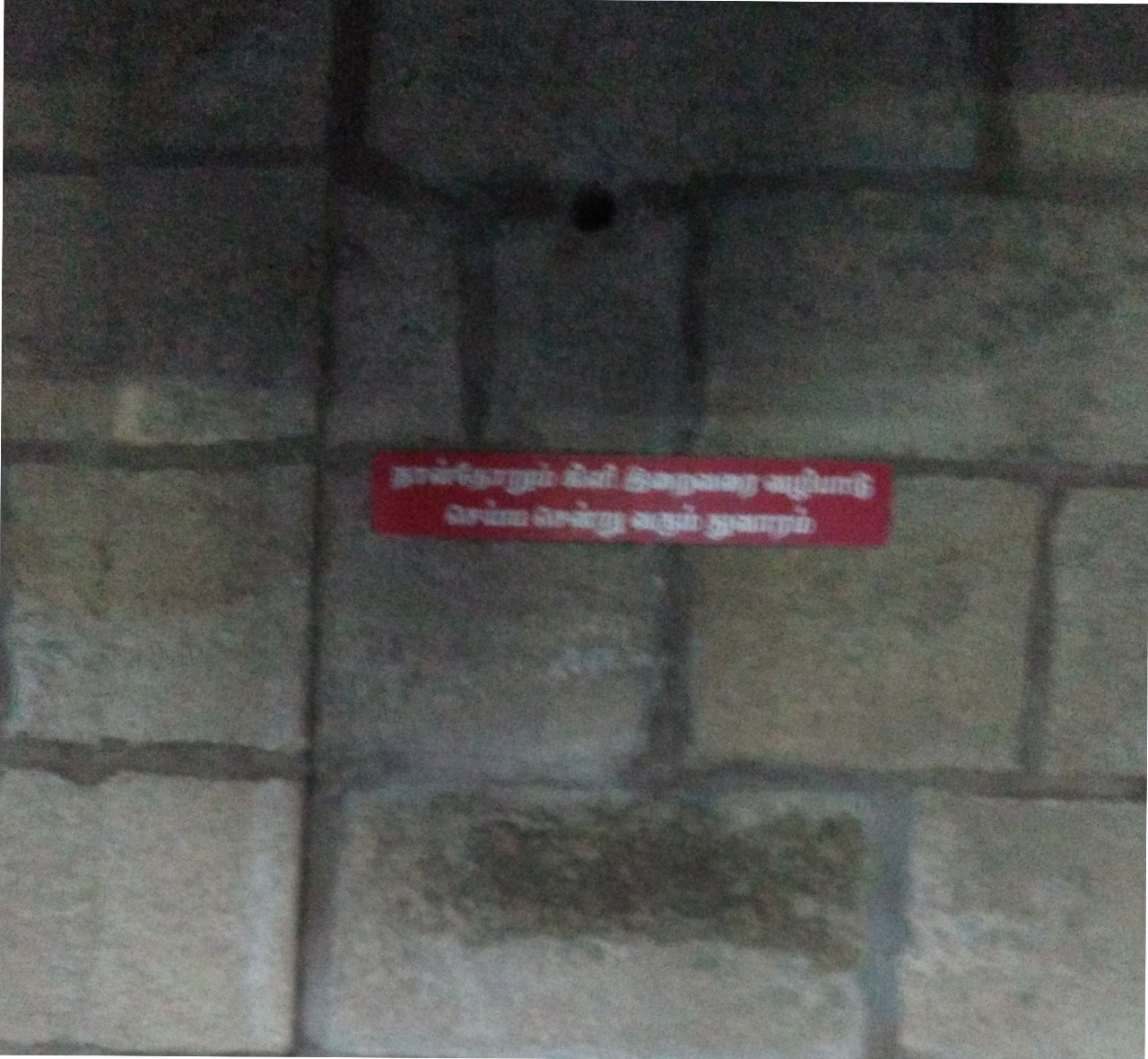 In this temple, there is a magnificent building called “Vavval Nethi Mandapam”. This is a huge hall (in the shape of a tomb) having curved roofs but without any pillars in the middle. Another significance of this hall is that bats (vavval in Tamil) cannot come and stay on the roof. This kind of architectural beauty is very rare to see. In this hall, the wedding festival of Lord Shiva and Goddess Parvathy is celebrated in the Tamil month of Chithirai every year. 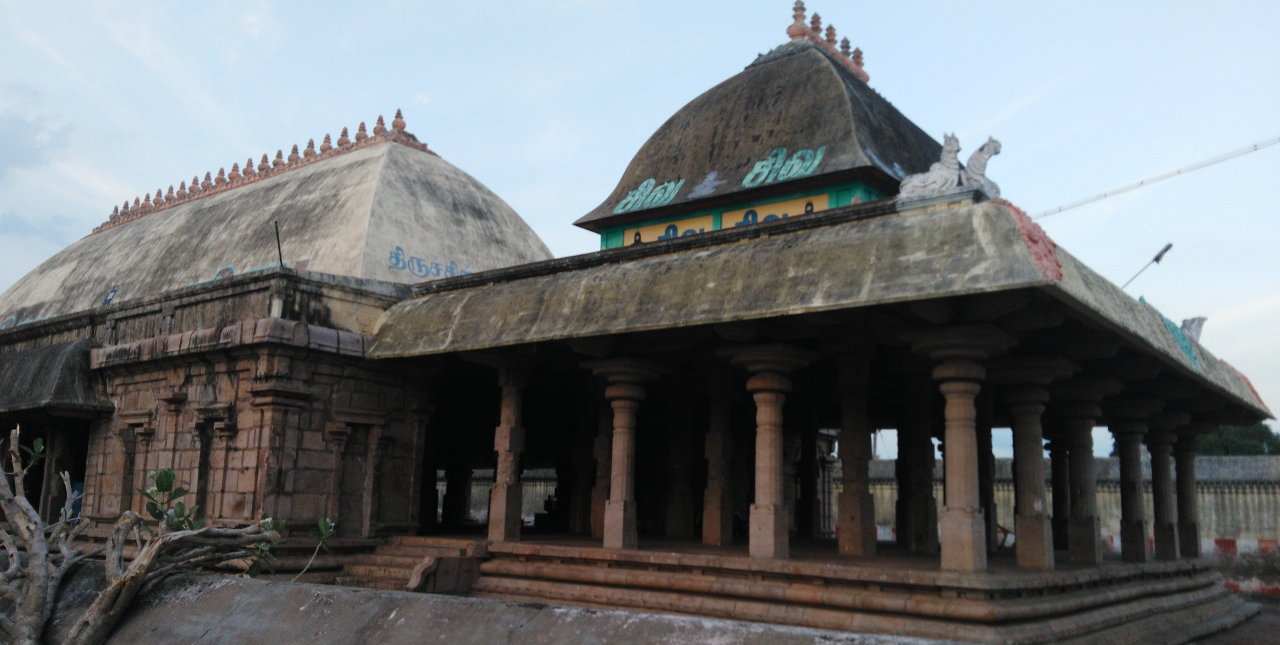 Another architectural beauty in this temple is the 100-pillared hall which has many marvellous sculptures.

Saint Senthanar rendered his “Thiru Isaippa” praising the lord of this temple.

This is considered to be a famous “Parihara Sthalam” to remove obstacles from marriage proposals.

10-day "Chithirai Peruvizha" in the Tamil month of Chithirai (April) is celebrated in a grand manner. 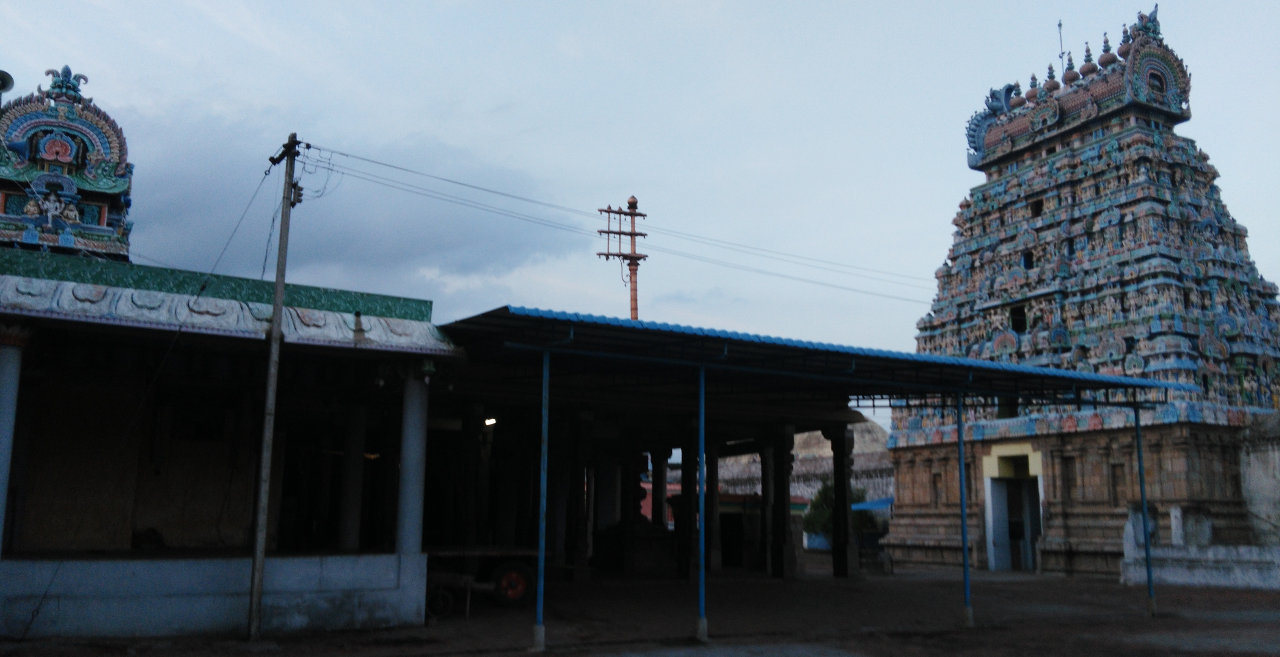 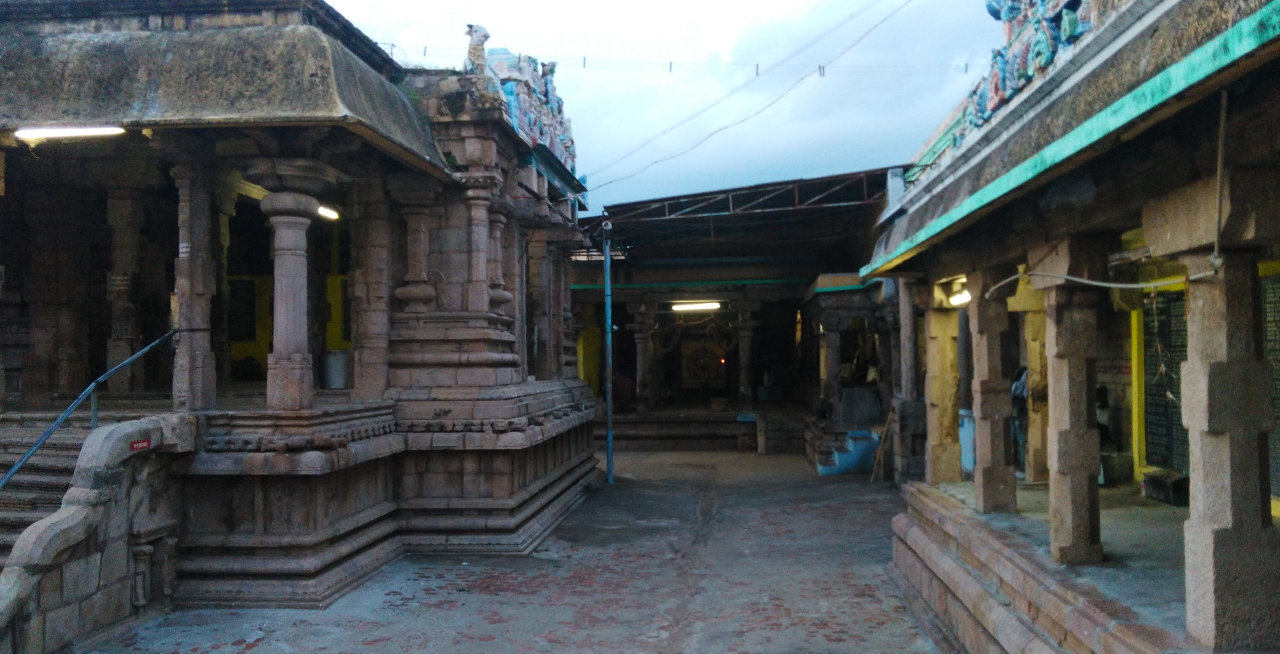