One of the famous Vaishnava temples, Oppliyappan Koil (Lord Venkatesa Perumal of Thirupathi) is very close to this place.

According to legend, in ancient times, this region was a forest densely covered with Shenbaka trees. Hence this place gets the name Shenbakaranyam and the lord is praised as Sri Shenbakaranyeswarar.

The historical names of this place are Shenbaka vanam and Girikannikai vanam.

There are 16 stone inscriptions in this temple which date back to the periods of Chola kings Kandarathithan, Raajarajan and Rajendran. This temple was originally built by Kandarathithan. Later it was renovated and extended by Saint Sekkizhar and Govinda Dikshithar, a minister in the kingdom of Achuthappa Nayakkar. 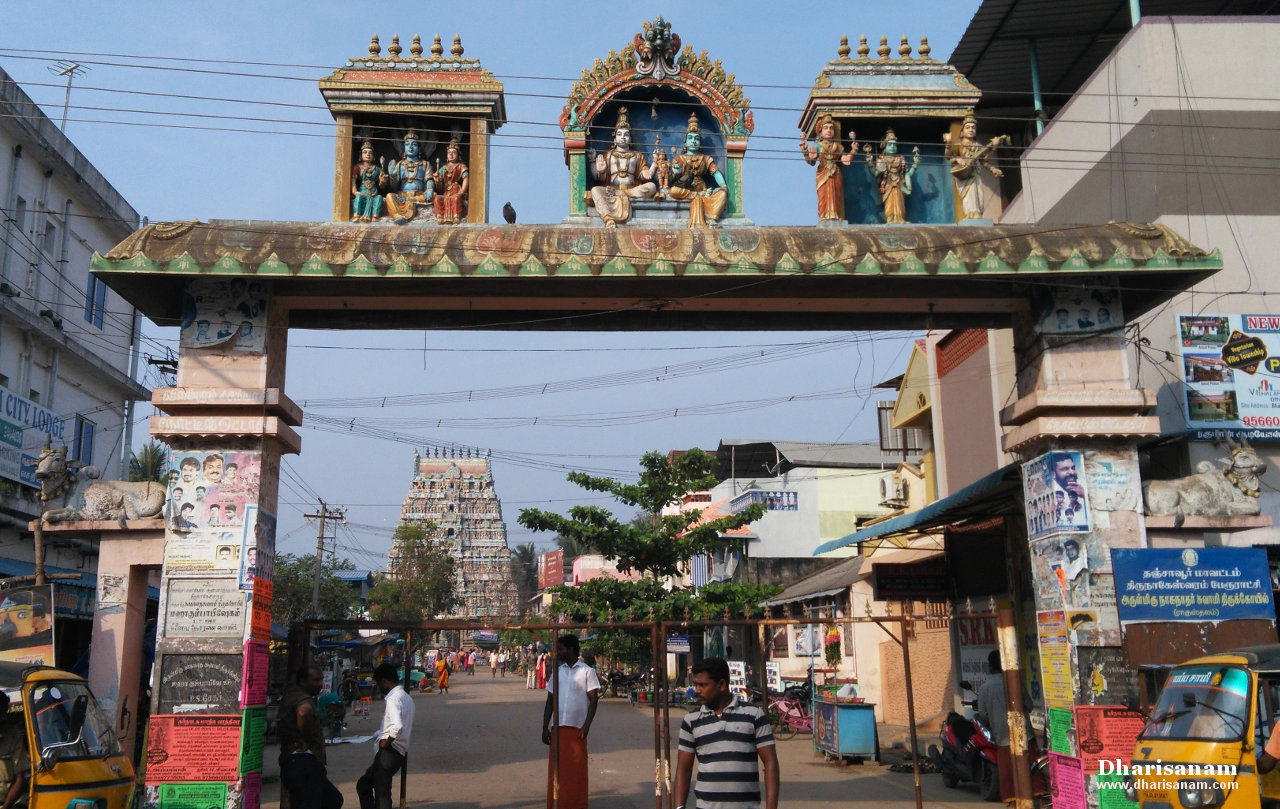 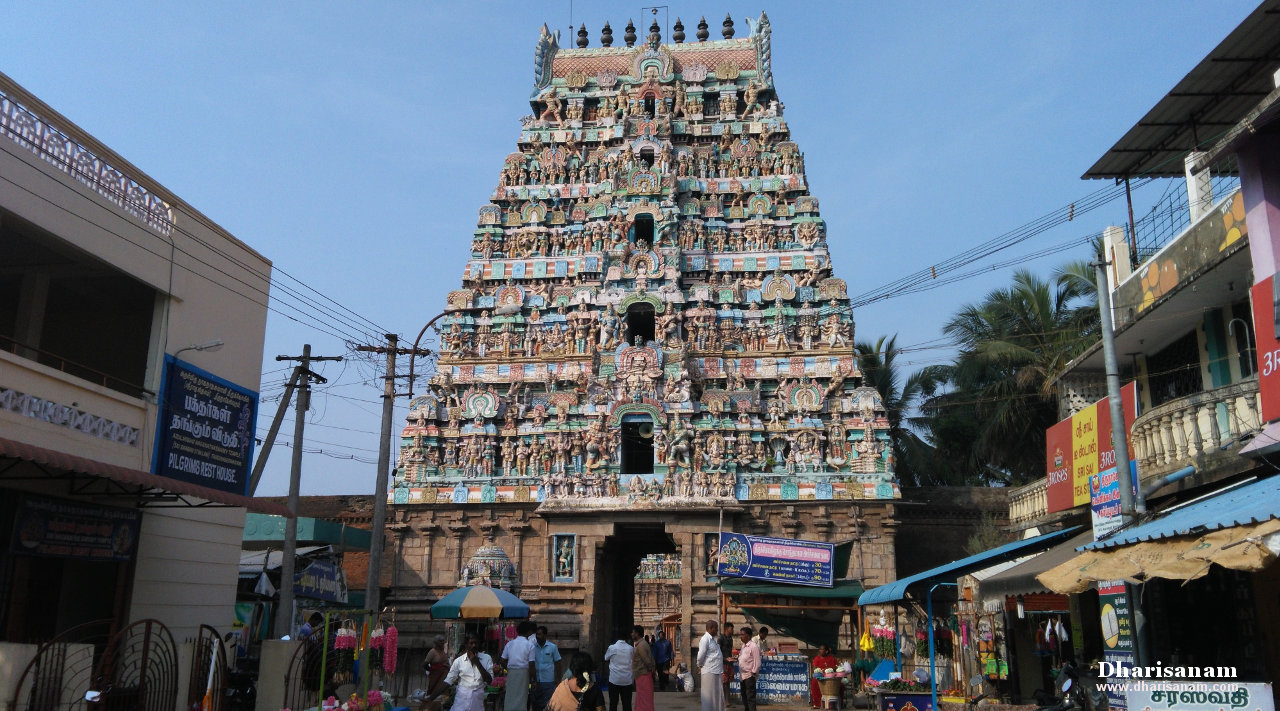 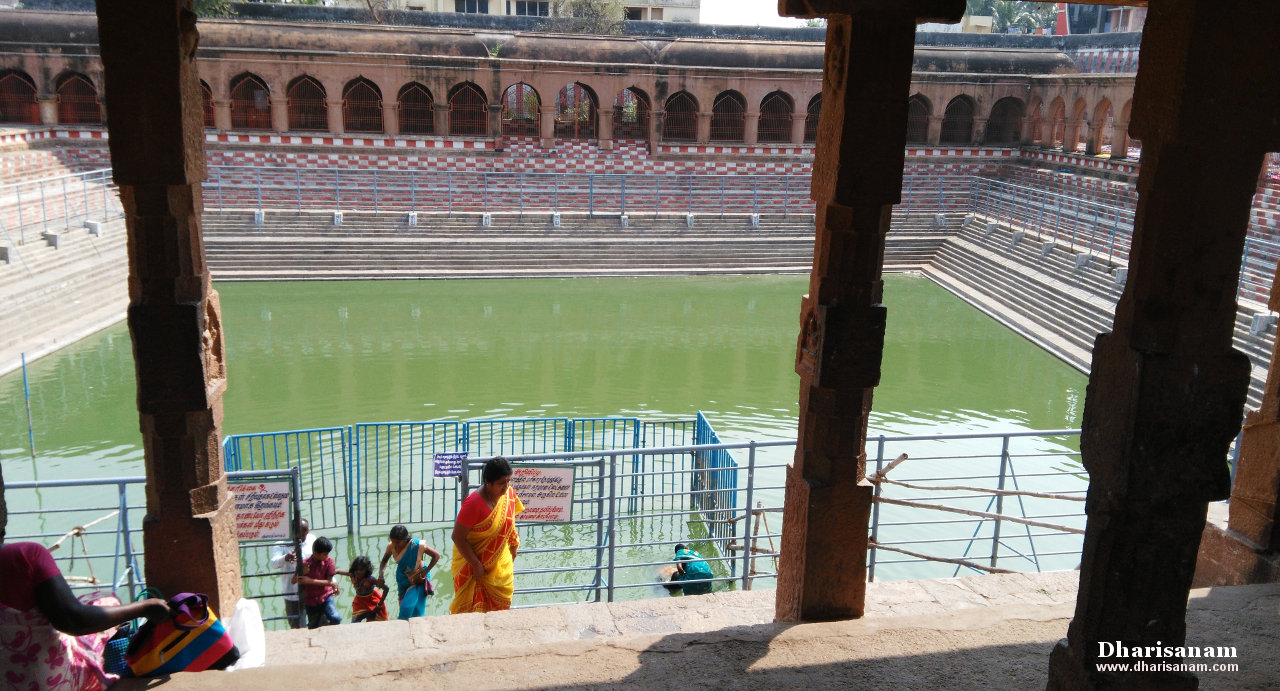 It is believed that Lord Shiva himself declared that this is the best Sthalam in the world.

According to legend, Lord Shiva had asked Goddess Parvathi to go to earth and perform penance because she had punished Sage Birunki severely. Lord Shiva also told her that Goddesses Lakshmi and Saraswathi will accompany her. Goddess Parvathi selected this place (Thirunageswaram) to perform her penance. Pleased with her penance, Lord Shiva blessed her with his darshan and took her back to Mount Kailash. Goddess Parvathi is praised here as Sri Girigujambal. Her idol is also believed to be “Swayambu”.

All the “Ashtamaha” serpents – the eight great serpents- (Ananthan, Vasuki, Thatchakan, Karkodakan, Sankapalan, Kulikan, Padman and Mahapadman) along with Adhiseshan worshiped the lord here. Adhiseshan came from the “Padhala logam” (underworld) and visited this place. Hence, Lord Shiva here is praised as “Thiru Nageswarar” (“Nagam” means snake and “Nathar” means the lord in Tamil) and the place gets the name Thiru Nageswaram. In his hymn, Saint Thirunavukkarasar mentioned that this lord was worshiped by the five-headed serpent.

The legend of this temple also finds a mention in the “Samudra Manthan” episode in Hindu mythology. After extracting the nectar from the “Thiruparkadal” ocean, it was distributed among all the devas. Raahu also took a portion of the nectar. However, when Lord Mahavishnu realised that Raahu was the son of a demon woman, he severed his head. Raahu prayed to Lord Shiva for forgiveness. It is believed that Lord Shiva is restored him back to life by placing the severed head on a snake’s body. Lord Shiva also blessed him and gave him a place among the nine planets.

Raahu is believed to have worshiped Lord Shiva here. Normally, Raahu appears in a snake form with human head in other temples but here he has a separate shrine. In this shrine, the idol is depicted in a human form. Also, this is the only place where the idol of Raahu can be seen with his consorts - Nagavalli and Nagakanni.

Sekkizhar, who wrote the famous “Periya Puranam”, was an ardent Shiva devotee. He renovated this temple in the 12th century and built a hall in the second corridor. It is believed that he received “Thiruvadi gnanam” from Lord Shiva in this temple. “Thiruvadi gnanam” means that the lord’s feet are placed on a devotee’s head. The idol of Saint Sekkizhar can be seen with the idols of his mother Azhakaambigai and brother Balaravaayar in the main hall (Thiruppani Mandapam). He also built a temple in his native place, Kuntrathur near Chennai, and named that with this temple’s name – Thirunageswaram.

It is also believed that Nandhi, Chandran, Suryan, Nalan, Gauthamar, Paraasarar and Bhageerathan have worshiped the lord here.

The Sthala Puranam mentions many legends associated with this temple. Some of them are -

Sage Gauthamar was re-united with his wife Akalika after worshiping the lord here.

Chandira Varman, who had been turned into a dog due to a curse, was restored to his original form after he took a dip in this temple’s holy water and worshiped the lord here.

Lord Vinayakar, after worshipping Lord Shiva here, attained the status of “Ganapathy” - the head of Ganas (“Ganas” are the attendants of Lord Shiva).

It is believed that Sage Brinki got the darshan of all the three goddesses (Parvathy, Lakshmi and Saraswathi) simultaneously here.

This is the only place where Goddess Parvathy is depicted as a child in the morning, a young girl in the noon and in the evening as a fully-grown woman with knowledge of the 16 arts.

Other than the shrines of Lord Shiva and Goddess Parvathy (both facing the east), shrines and idols of Nirutha Ganapathy, Shenbaga Vinayakar, Nandhi, Aadhi Vinayakar, Murugan with his consorts, Natarajar, Somaskandar, Nalvar, Sapthamathakkal, Mahalakshmi, Saraswathi, Navagraham, Chandran, Suryan and Maha Bairavar can be seen in the main hall and corridors.

63 Nayanmars can be seen in the corridors along with idols of Vinayakar, Murugan, Natarajar and Dakshinamurthy.

There is a separate shrine for Lord Vinayakar near the Theertham and it is known as “Sri Mazhuporutha Vinayakar”.

In the “koshtam” (place surrounding the sanctum sanctorum), idols of Narthana Ganapathy, Natarajar, Agasthiyar, Dakshinamurthy, Lingothbavar with Brahma and Mahavishnu, Durgai and Chandikeswarar can be seen. In the Navagraham, all the other idols are facing Suryan.

There are two shrines for Goddess Parvathy here. One is “Sri Arthachandra Bimba Gujambigai” or “Sri Piraiyanivaal Nuthal Ammai” (“Pirai” means Chandran (moon), “anivaal” means “to wear” and “nuthal” means forehead in Tamil). Every year, during the Tamil month of Karthigai, on the full moon day, the rays of Chandran fall on this goddess.

The other one is “Sri Girigujaambigai”. This goddess is shown in a yogic posture. This idol is made of clay (sudhai) and no abhishekam is performed. Only civet (“Punugu”) is applied on some specific days. On her either side, idols of Goddesses Lakshmi and Saraswathi can be seen. Saraswathi is holding her veena and Lakshmi is holding lotus flowers. 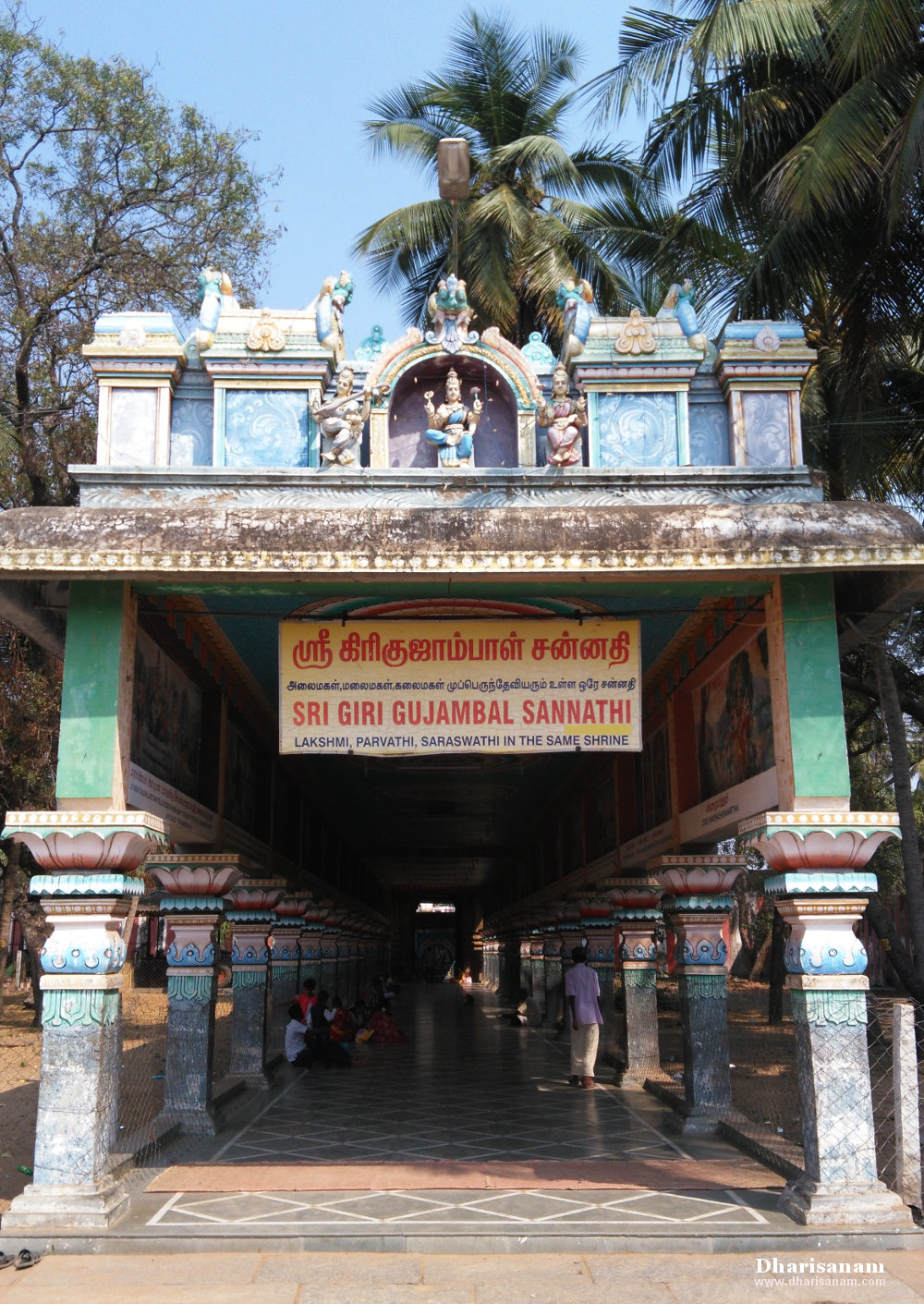 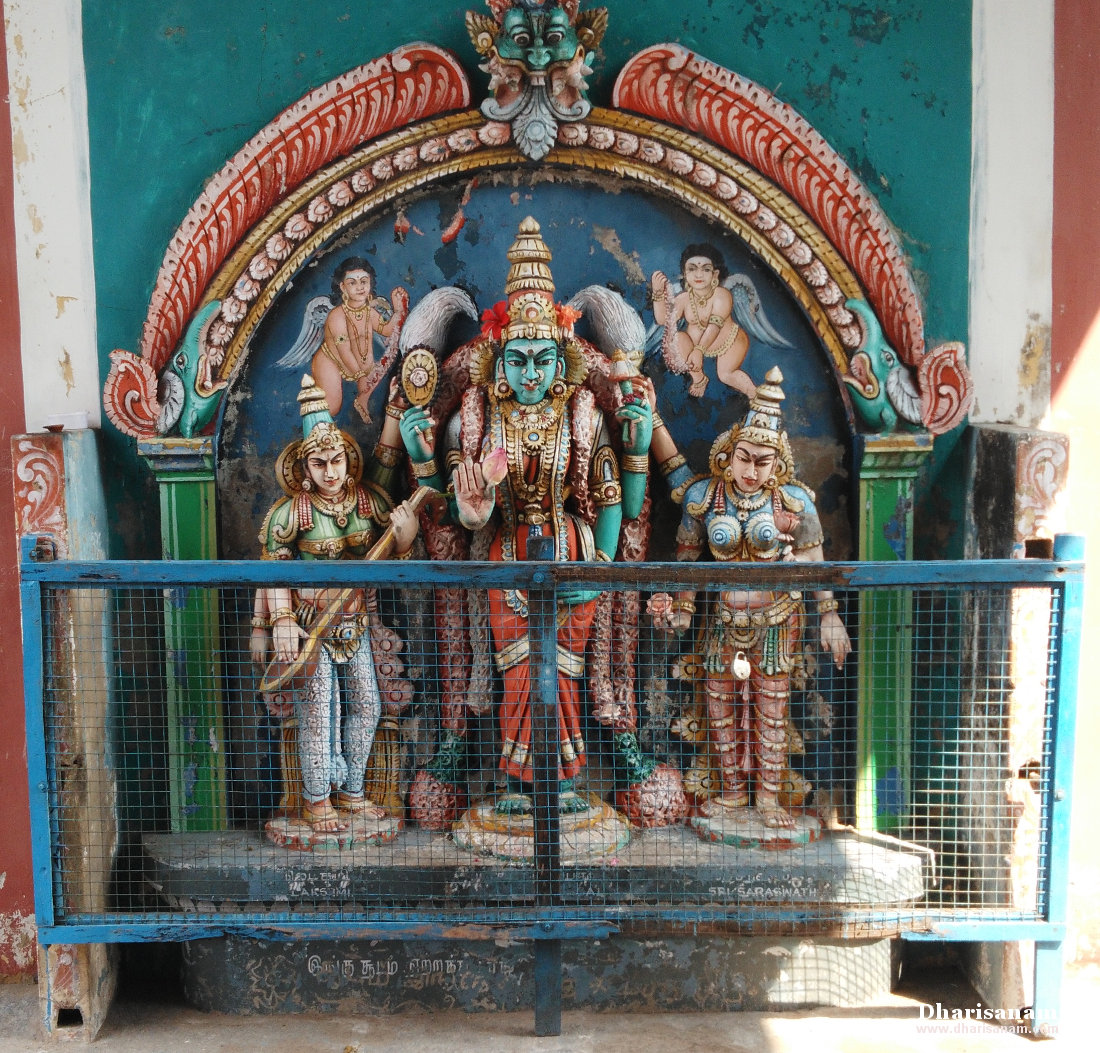 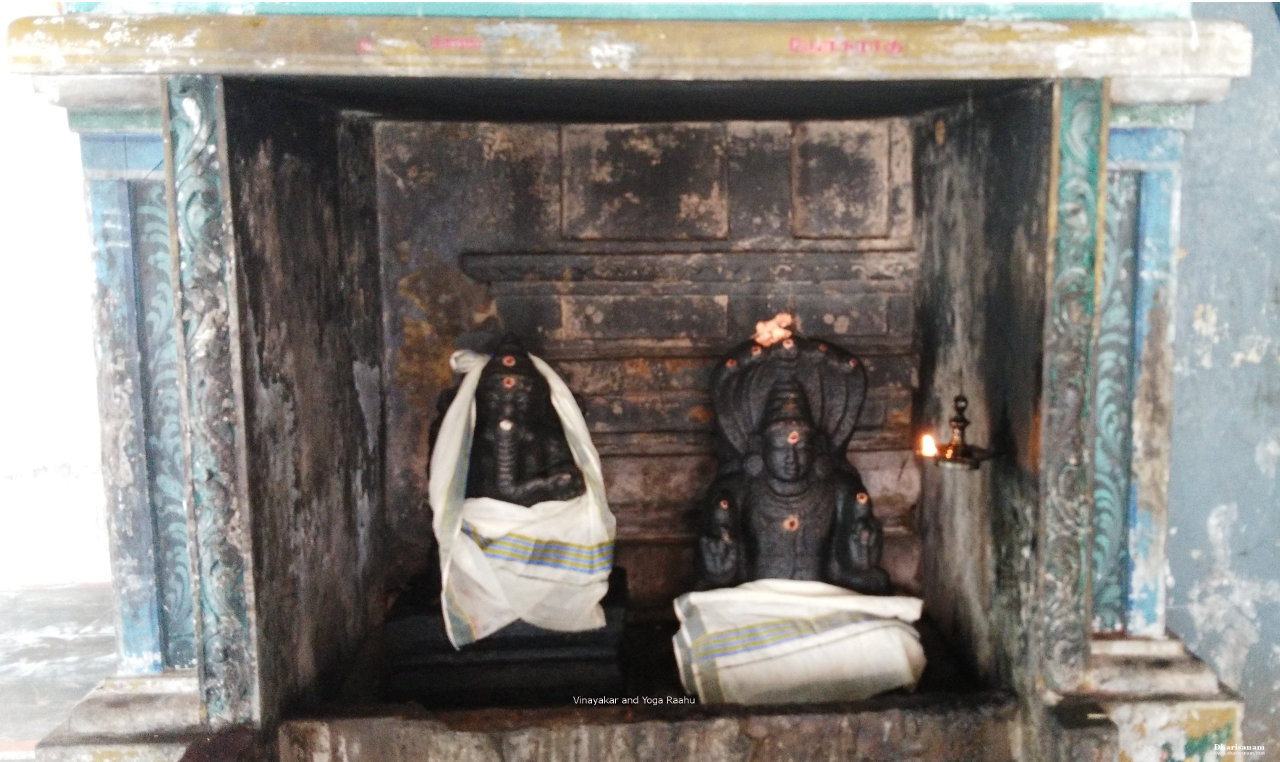 An important event in this temple is the milk abhishekham that is performed for Raahu. Special poojas are performed for Raahu between 4:30 p.m. and 6:00 p.m. (“Rahukaalam”) on all Sundays. At this time, the milk that is poured on this idol changes its colour to blue as it passes over the body. The cloour of the milk again changes back to white when it reaches the ground.  A large number of devotees gather here to worship Raahu during this time.

Lord Murugan’s shrine is in between those of Lord Shiva and Goddess Piraiyanivaal Nuthal Ammai. This type of placement is called “Somaskanda”.

The 100-pillared hall has beautiful sculptures. It looks as if the entire hall is placed on a chariot. 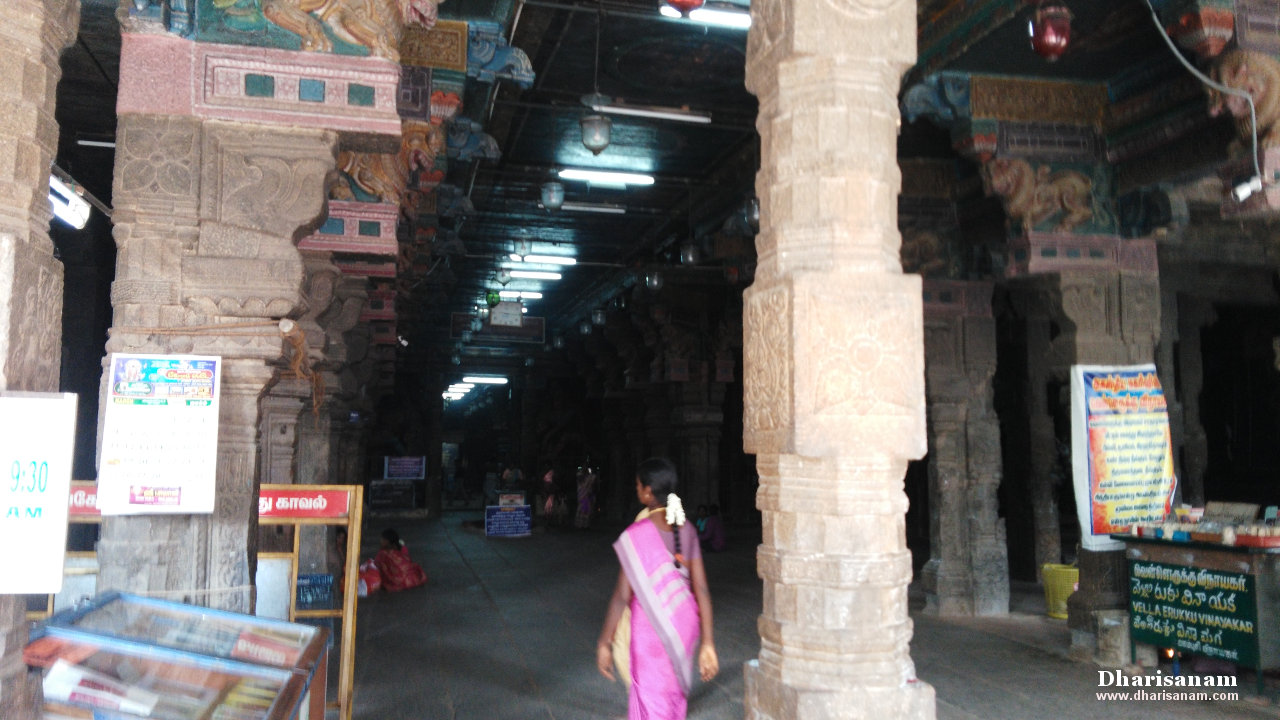 The three Goddesses – Girigujambikai (Parvathy), Mahalakshmi and Saraswathi are gracing the devotees from a single shrine here.

On 16th February 1986, a snake shed its skin (length 5.5 feet) in the form of a garland on the idol of Lord Raahu. This skin is preserved in a glass box.

Worshiping Lord Shiva in the morning at the Sri Nageswarar temple in Kudanthai Keezhkkottam, at noon in this temple and in the evening at the Thiruppampuram temple is considered very auspicious.

It is believed that earlier this temple has 12 Theerthams, including those of the three rivers – Naattaru, Arisilaru and Kirthimanaru which were created by Lord Shiva using his trident. However, now only one of them - the “Surya Pushkarini” can be seen inside the temple.

There is a Tamil proverb which can be loosely translated as follows – No one can bless like Raahu and no one can create obstacles like Kethu. Since this is a parihara sthalam for Raahu, devotees can worship him here to seek his blessings.

In Goddess Girigujambikai’s shrine, there is a small enclave which houses idols of Lord Vinayakar and Yoga Raahu. This idol of Yoga Raahu is quite unique.

There are beautiful paintings in Goddess Girigujambikai’s shrine depicting the legends associated with this temple.

This is a famous “Parihara Sthalam” for those suffering from the adverse effects of planet Raahu and Kethu. For example, doshas like “Sarpa dosha”, “Kalathira dosha”, “Pithru dosha” and “Kalasarpa dosha”.

The transition days of the Raahu planet are also celebrated here with special poojas. 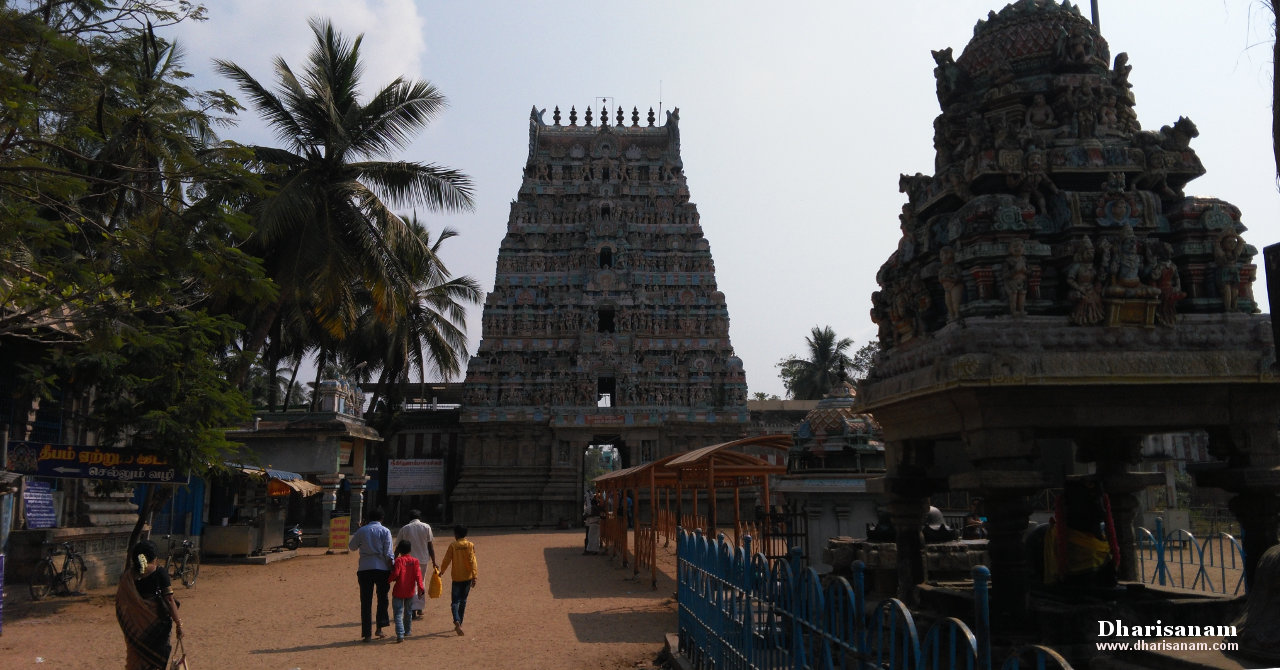 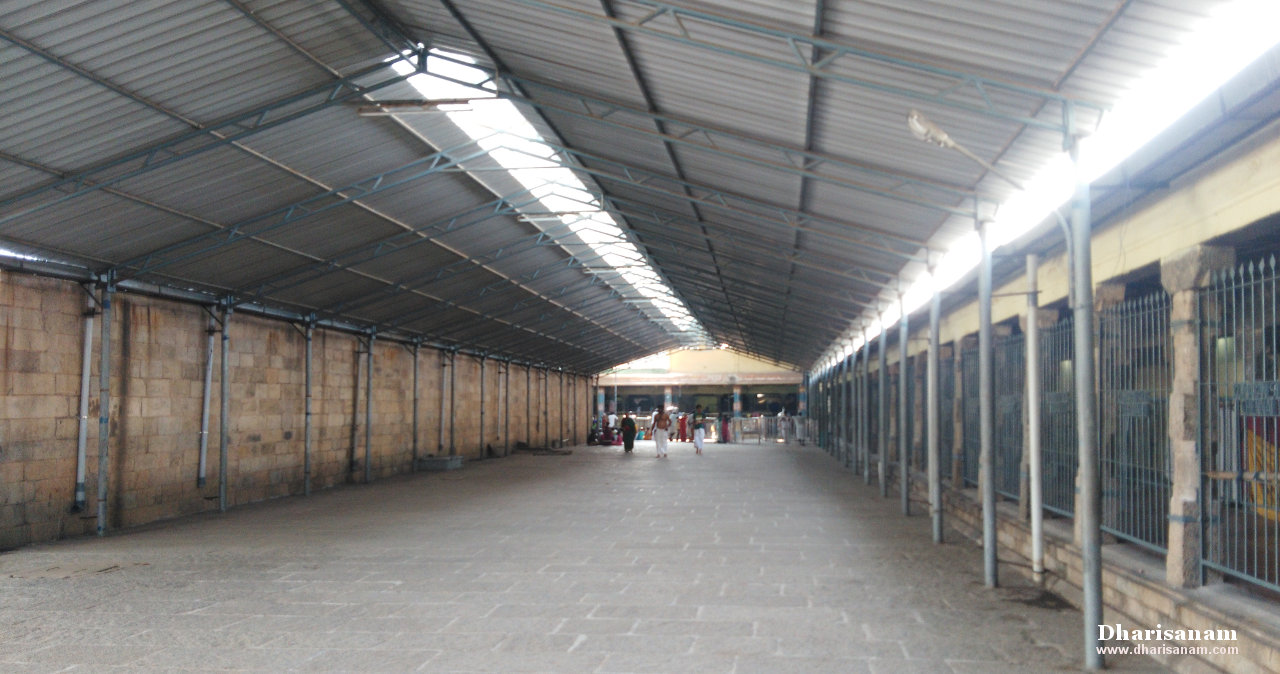