Thirukkarukavur is situated at a distance of about 20 kms from Tanjure on the Tanjure to Kumbakonam (Via Thittai-Melattur-Papanasam) route. It is about 20 kms from Kumbakonam. Nearest railway station is Papanasam on the Mayiladuthurai to Tanjure line, which is about 5 kms away from this place.

This ancient temple is believed to be over 2,000 years old and is situated on the banks of the river Vettaru. This temple is spread over 3 acres of land.

There are stone inscriptions in this temple which date back to the periods of Chola kings Koppara Kesari Varman and Raja Rajan-I.

The historical names of this place are Mullaivanam, Garbapuri and Madhavivanam (Madhavi means “Mullai” plant, a variety of jasmine). 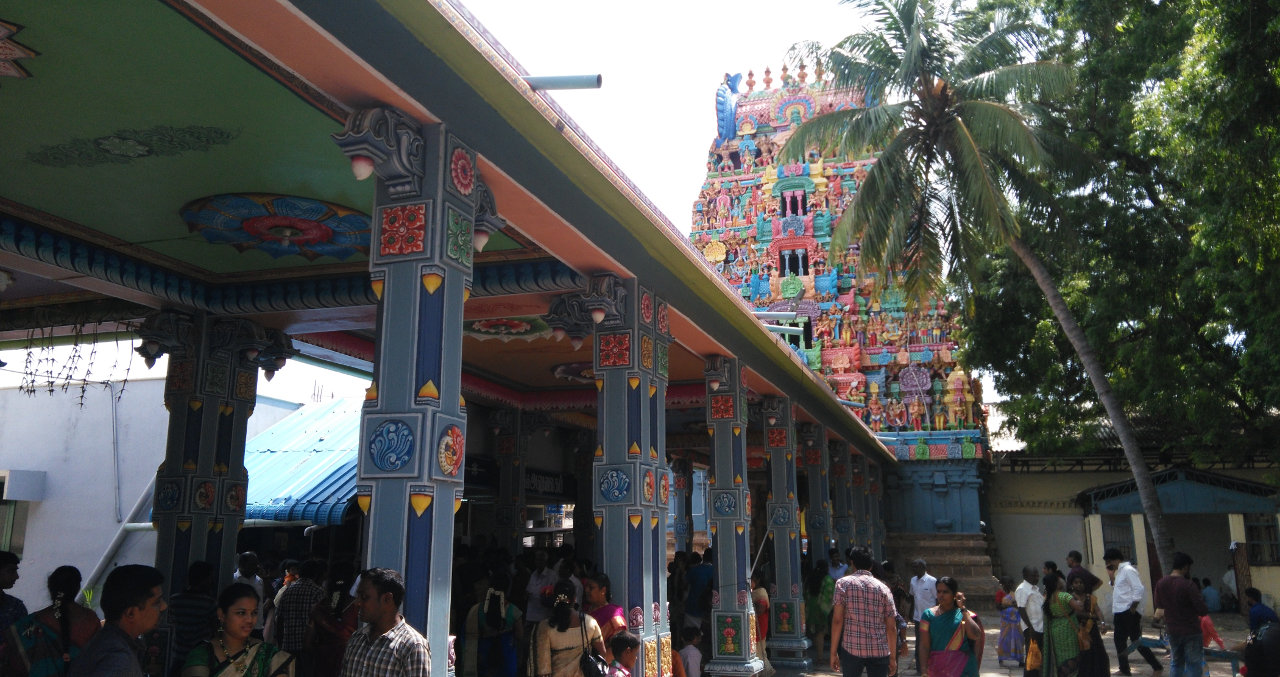 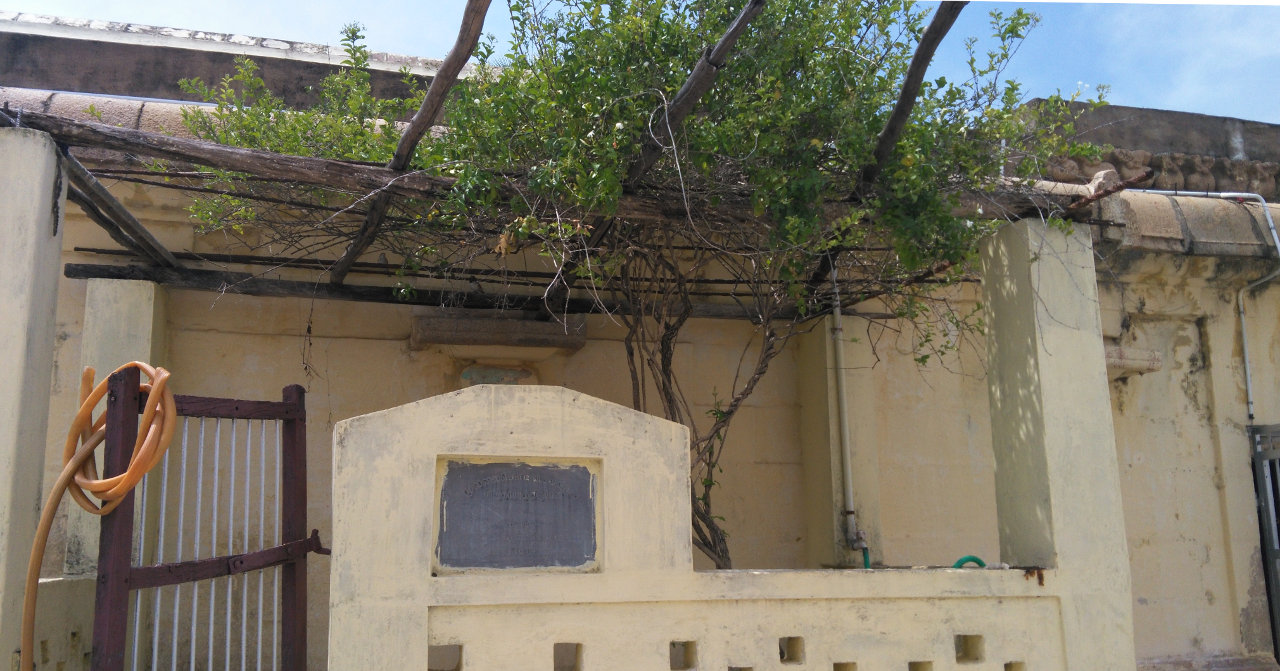 There are five Devara Paadal Petra Shiva Sthalams at different places in the Thanjavur, Kumbakonam and Thiruvarur regions which are revered as “Pancha Aranya Sthalams”. Thirukkarukavur is one among them. “Pancha” means five and “Aranyam / Vanam” means forest in Tamil. In ancient times, these regions were densely forested. These five temples are –

Worshiping the lord at these five temples in a single day is considered to be auspicious. These temples should be visited in the order given above at the following times - early morning, morning, noon, evening and night respectively. It is also believed that Saint Thiru Gnanasambanthar worshiped Lord Shiva at these temples in this order. It is believed that by worshiping the lord in these 5 temples in this prescribed order, devotees will be absolved of the sins of their previous birth. It is also believed that such worship would help devotees break away from the repetitive cycle of birth and re-birth.

According to legend, the lingam was found in the midst of jasmine plants here. Hence the lord is praised as “Sri Mullai Vana Nathar”.  The mark of the creepers around the lingam can be seen. This lingam is big in size and is a self-manifested lingam that formed from the mud of an ant-hill. It is always covered with a metal bowl (“Kuvalai” in Tamil).  Hence, no “abhishekam” is performed to the lingam directly and only “Punuhu” (civet) is applied. Devotees who are afflicted with incurable diseases come to this temple during Pradosham days of the full moon fortnight, offer "Punuhu Chattam" to Lord Shiva to seek relief for their afflictions. The lord is also praised as “Sri Bhavaroga Nivaaranan” as he is believed to be the lord who relieves devotees from their sins.

Another legend associated with this temple is that of Vedhikai, wife of Sage Nithruvan. It is believed that both lived in this place and worshiped Sri Mullaivana Nathar and Goddess Parvathi in order to be blessed with a child. Once, when Vedhikai was in an advanced stage of pregnancy, she became very tired and was taking rest in her house. Her husband was not home at that time. Incidentally, another sage by the name of Urthuvapadar, who was passing by her house, was thirsty and tried to call someone from the house. In spite of his repeated calls, no one came out. When the sage looked inside the house, he saw Vedhikai asleep. Not realising that she was pregnant, he cursed her and went away. Due to this curse, her foetus got disintegrated.

When Vedhikai woke up and realised that someone had visited her house, she came out and saw the Sage Urthuvapadar leaving. She then noticed that something was wrong with her body as she felt uneasy. Afraid that the sage might have cursed her, she prayed to Goddess Parvathi for help. The Goddess appeared before her, protected the foetus by preserving it in a “Kalas” (sacred pot) until it developed to a fully grown male child. The parents named their child as “Naidhuruvan”.

Vedhikai again approached the goddess for help as she had no milk to feed her child. The goddess directed Kamadhenu, the divine cow, to this place to feed the child. It is believed that Kamadhenu created a “Milk tank” (“Ksheera kundam”) by scratching the earth in front of the temple with her hoof. This tank can still be seen today. 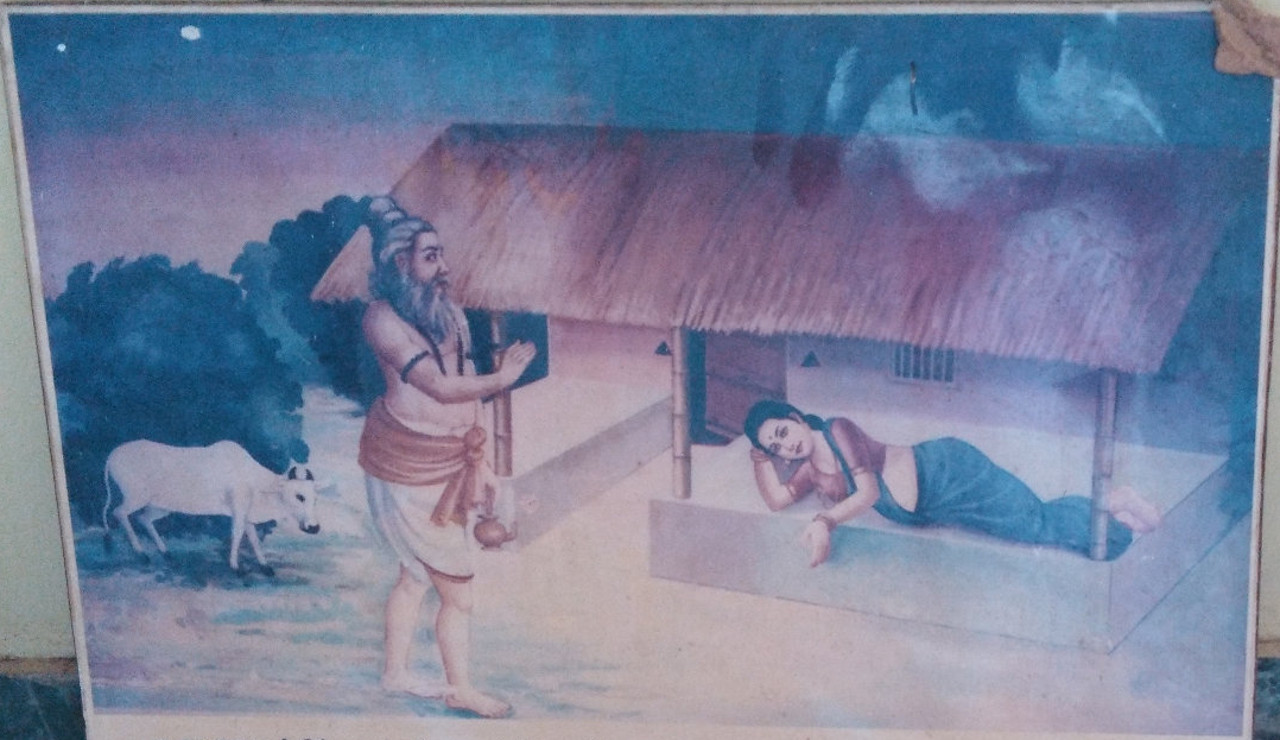 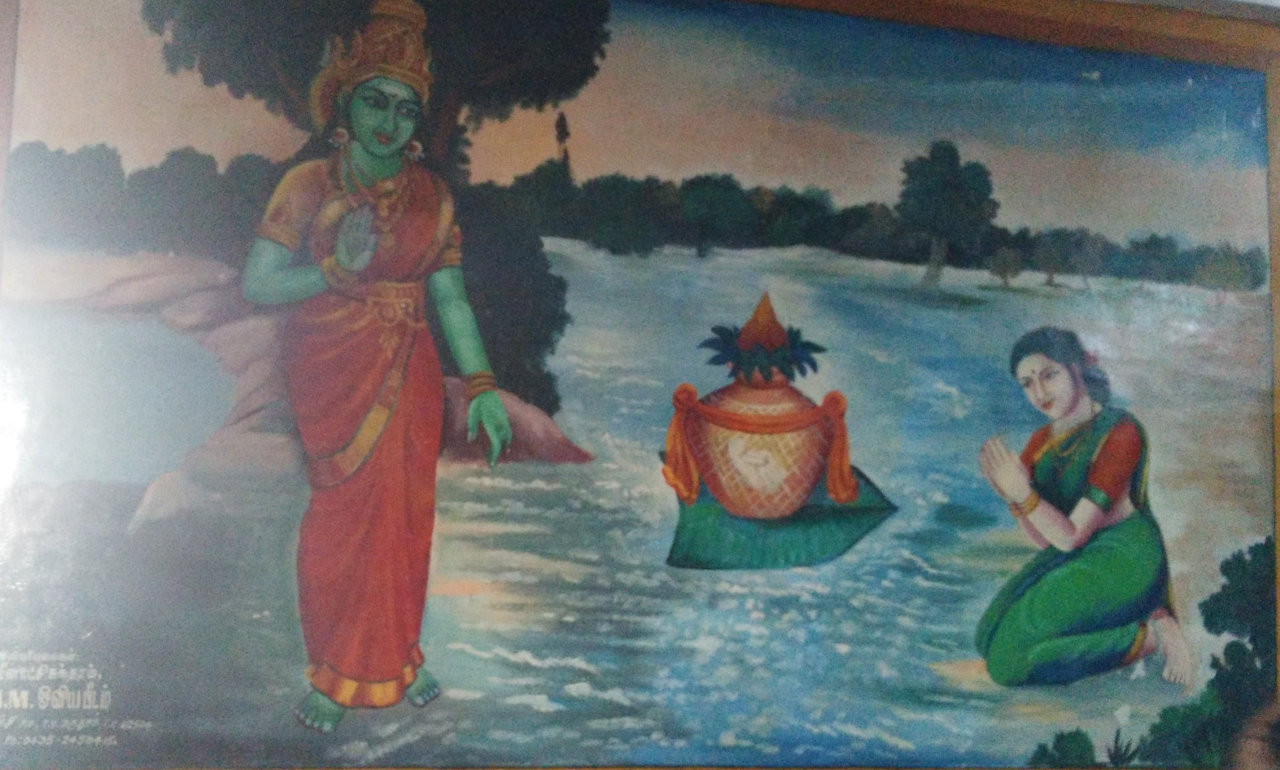 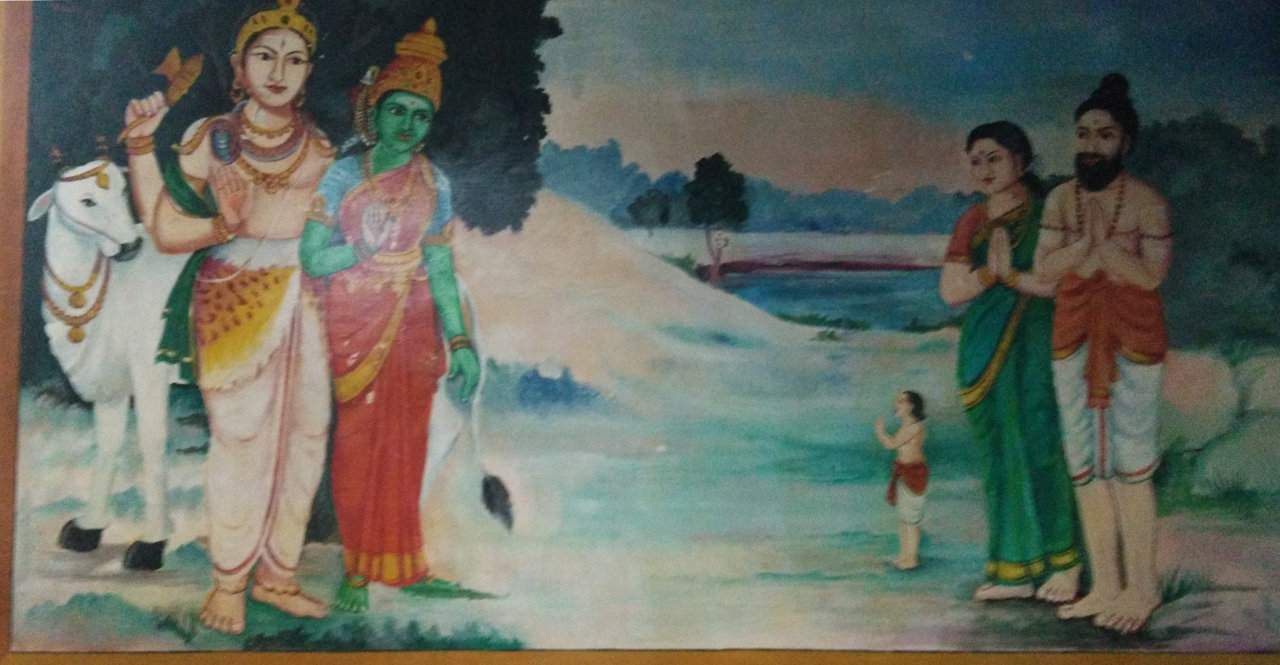 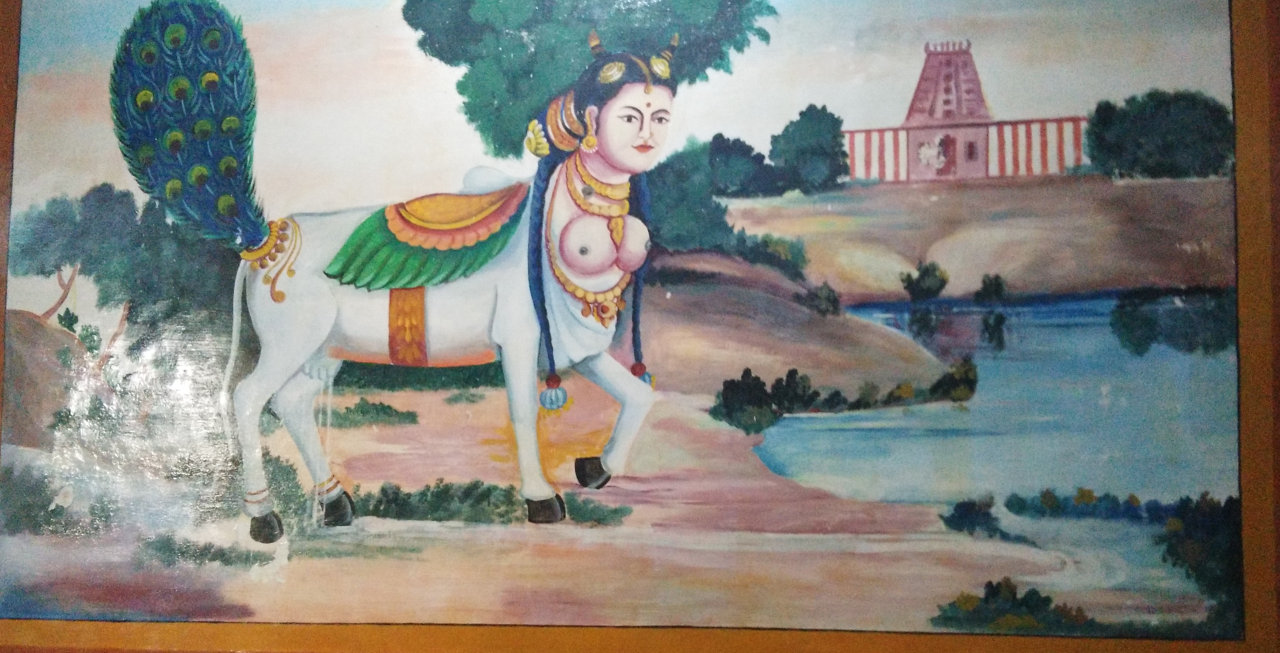 It is believed that when Sage Nithruvan came to know from his wife what had happened, he prayed to the goddess that she protect all the pregnant women who visits this place to worship her. Goddess Parvathi agreed to his request and is believed to be blessing the devotees since then. Hence, the goddess is praised as “Sri Garbarakshambigai”. “Garbham” means pregnancy, “Raksha” means “to protect” and “Ambikai” means goddess in Sanskrit. Similarly, the Tamil name “Sri Karu Katha Nayaki” is derived from “Karu” meaning foetus, “katha” meaning protector and “nayaki” meaning goddess. It is because of this incident that this place gets the name “Thiru Karu Katha Oor”. It has now been changed to Thiru karu kavoor.

Other than the shrines of Lord Shiva and Goddess Parvathy (Garbarakshambigai), shrines and idols of Niruthi Vinayakar, Venkatajala Vinayakar, Arumugar with his consorts, Gajalakshmi, Nalvar, 63 Nayanmars, Santhanachariyars, Bairavar and Suryan can be seen in the corridors.

Natarajar with Sivakami and Navagraham are placed in the main hall (Maha Mandapam). In the Navagraham, all the other idols are facing Suryan.

In the “koshtam” (place surrounding the sanctum sanctorum), idols of Vinayakar, Dakshinamurthy, Mahavishnu, Brahma, Durgai and Chandikeswarar can be seen.

There are separate shrines for the Shivalingams worshiped by sages Nithruvar, Karkkiyar and Gowthamar. Also, there is a Shivalingam in the corridor that is believed to have been worshiped by king Sangukarnan. 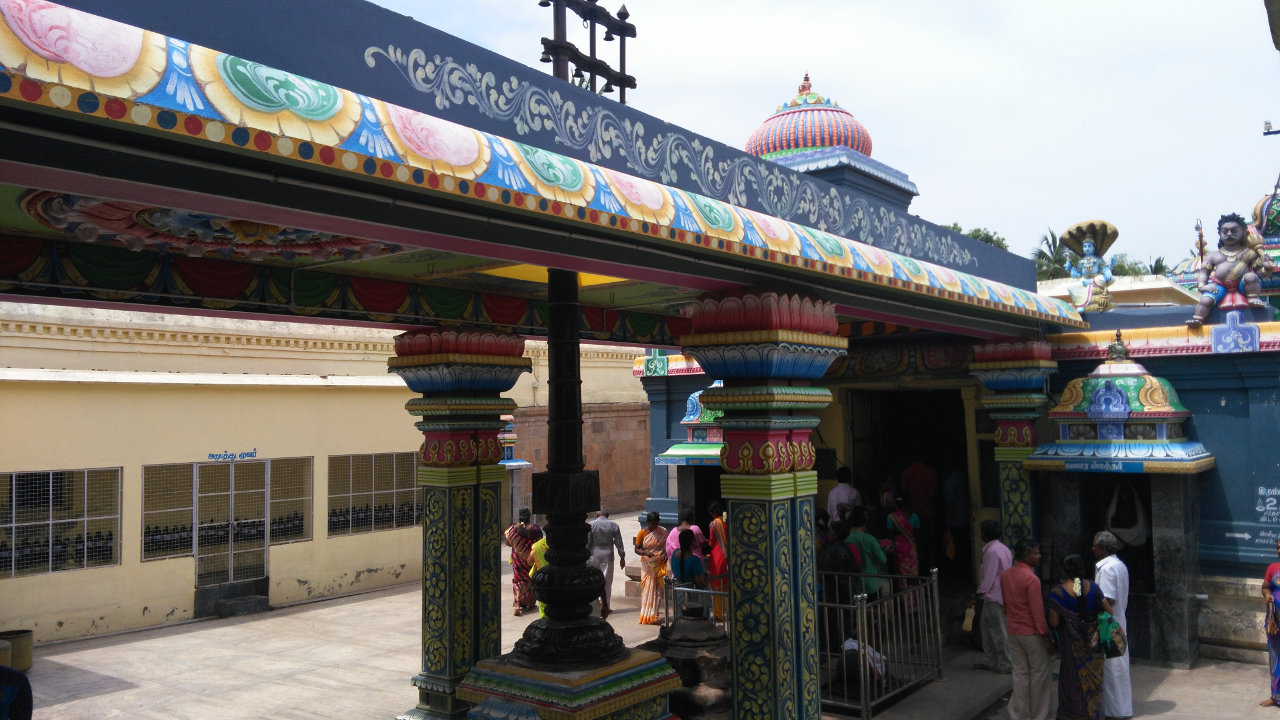 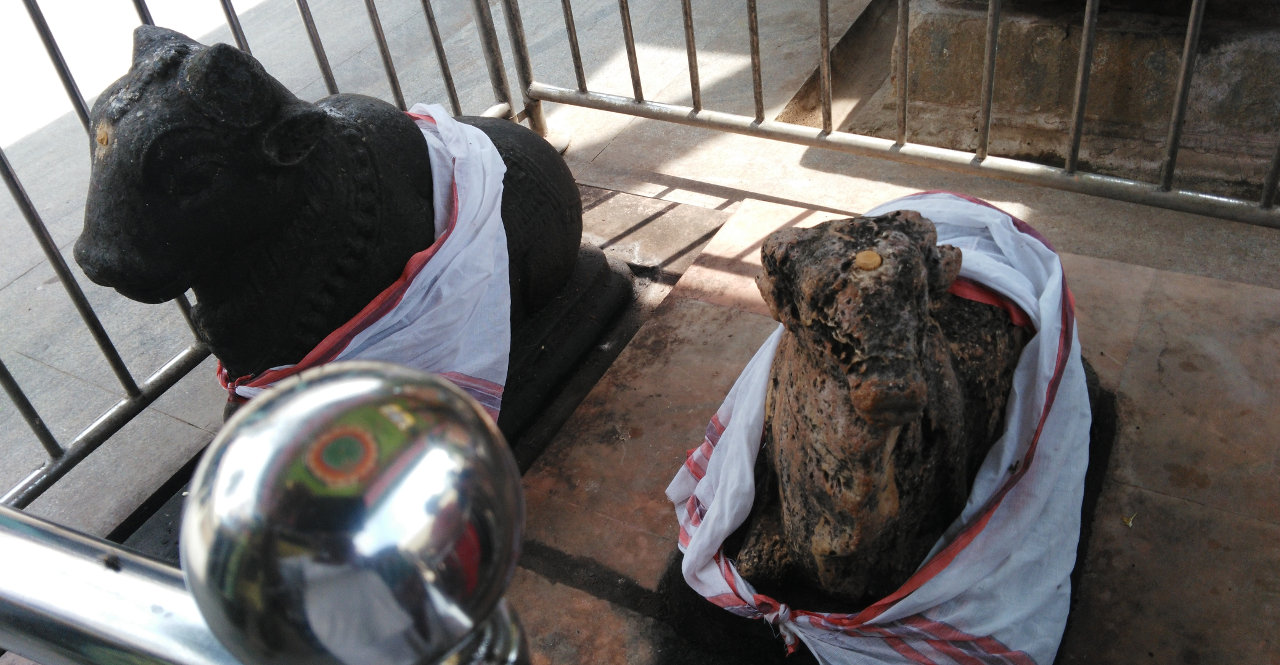 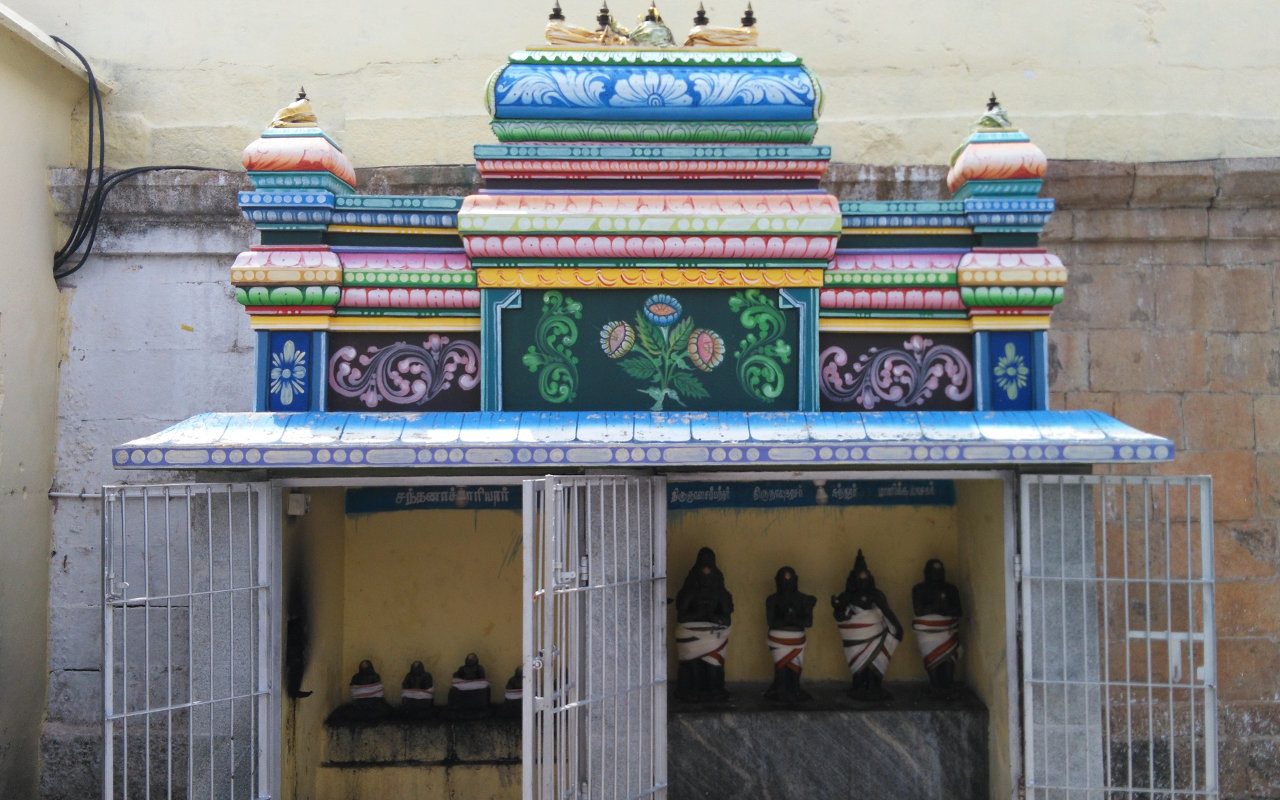 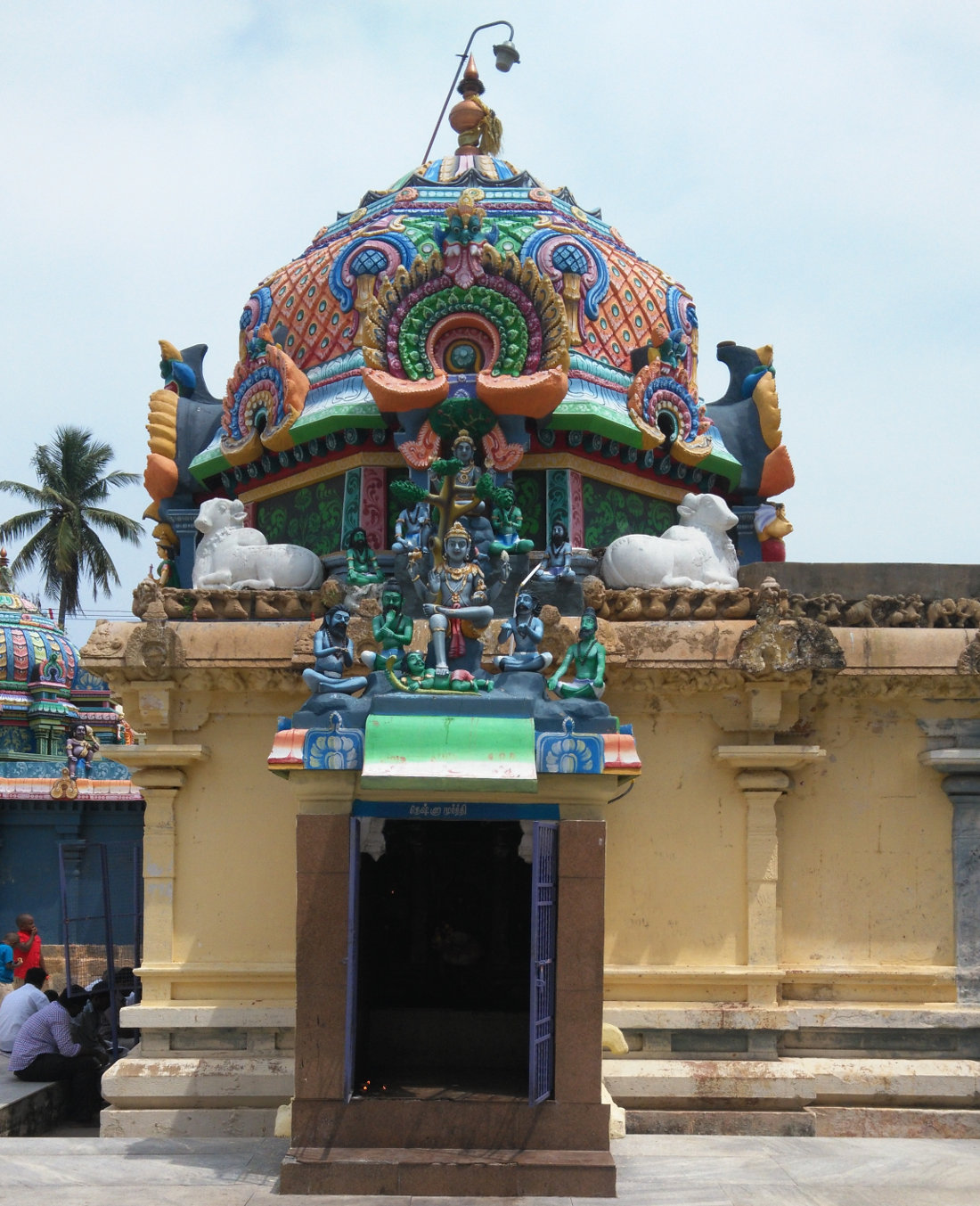 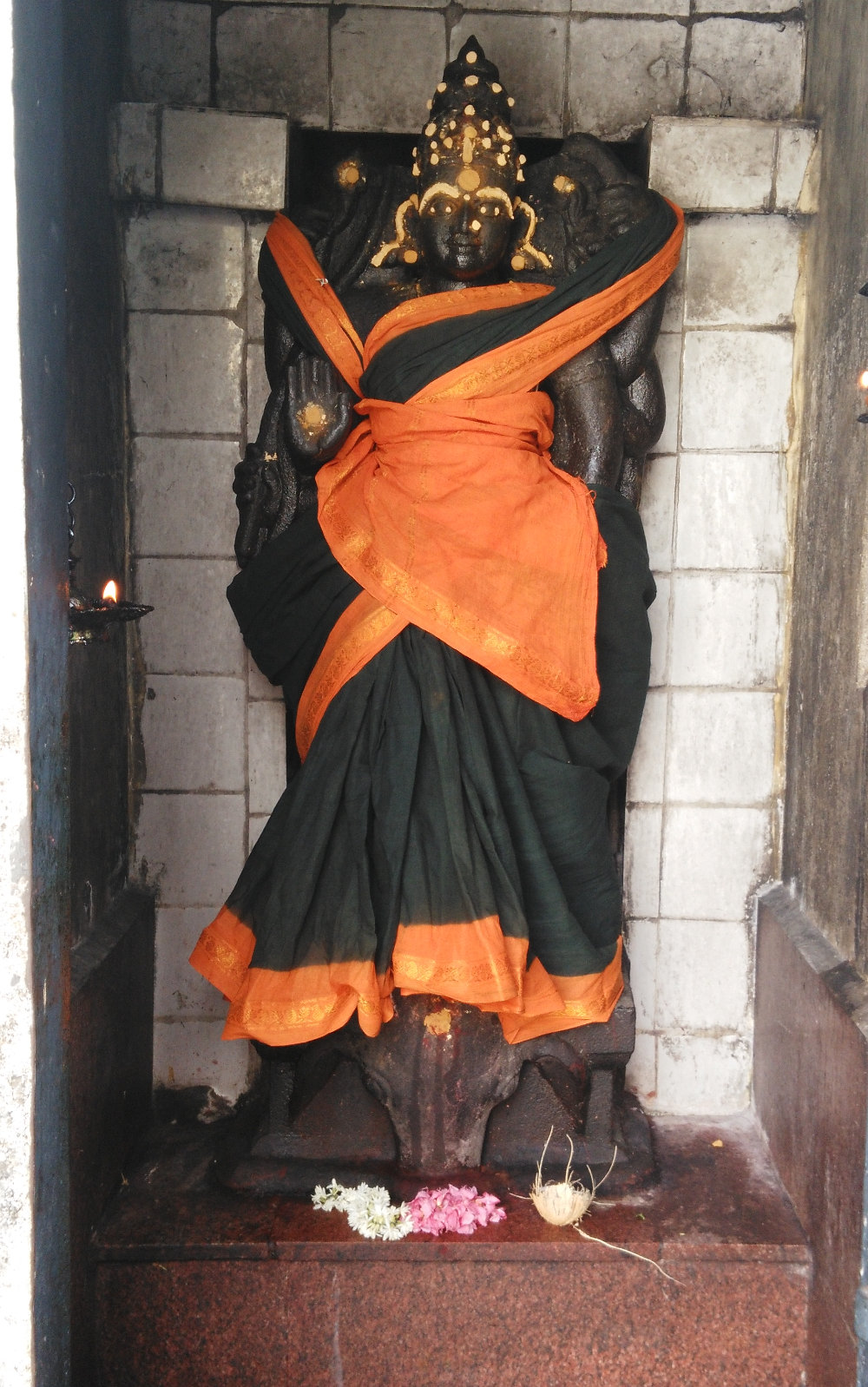 The procedure to worship goddess Parvathi here is –

For removal of obstacles from marriage proposals:

Devotees are advised to clean the sanctum’s steps with ghee, draw Rangoli and then perform the pooja.

Devotees are advised to clean the sanctum’s steps with ghee, draw Rangoli and then perform the pooja;

A portion of the ghee that is offered to the goddess is given back to the devotees. They have to consume it for 48 consecutive nights.

For safe delivery during pregnancy:

This temple offers castor oil after performing puja using it. Pregnant women are advised to apply it on the stomach during the time of labour pain.

On realisation of their wishes, devotees offer “Thulabaram” (any goods equal to one’s own weight) to the goddess here.

In this temple, Lord Murugan’s shrine is in between those of Lord Shiva and Goddess Parvathi. This type of structure is called as “Somaskanda” form. It is believed that circumambulating these three shrines together three times will yield a lot of benefit.

There is a hall in the shape of a chariot which houses the Shivalingam that is believed to have been worshiped by Sage Nithruvar.

It is believed that in this temple the Nandhi and Karpaga Vinayakar are Swayambu (self manifested).

In this temple’s Navagraham, all the planets are facing Suryan.

The special feature of this temple is that the moon's rays fall on Lord Shiva on the full moon day in the Tamil month of Panguni (March-April) every year.

It is pertinent to note that many gynaecologists visit this temple and worship the goddess for their patients’ safety and successful delivery. Some doctors have contributed heavily to the renovation and reconstruction of this temple.

It is believed that in this village no women has ever died during pregnancy.

Devotees throng this temple in large number to worship the lord and goddess to seek “Santhana Prapthi” (child boon), for removal of obstacles from their marriage proposals, and for safe delivery during pregnancy.

Punugu Chattam is offered to Lord Shiva on all Pradosham days of the full moon fortnight.

1008 conches abhishekam is performed to Lord Shiva on all Sundays in the Tamil month of Karthikai (Nov-Dec).

Other important festivals celebrated in the temple are – 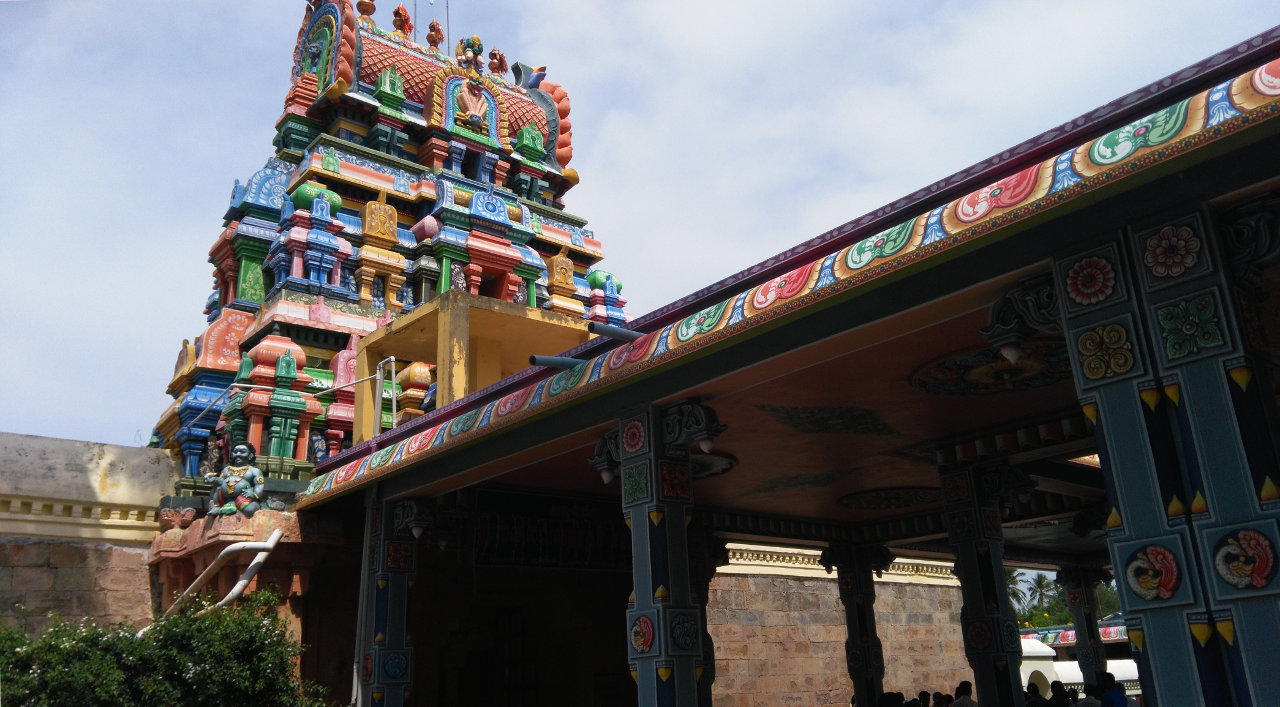 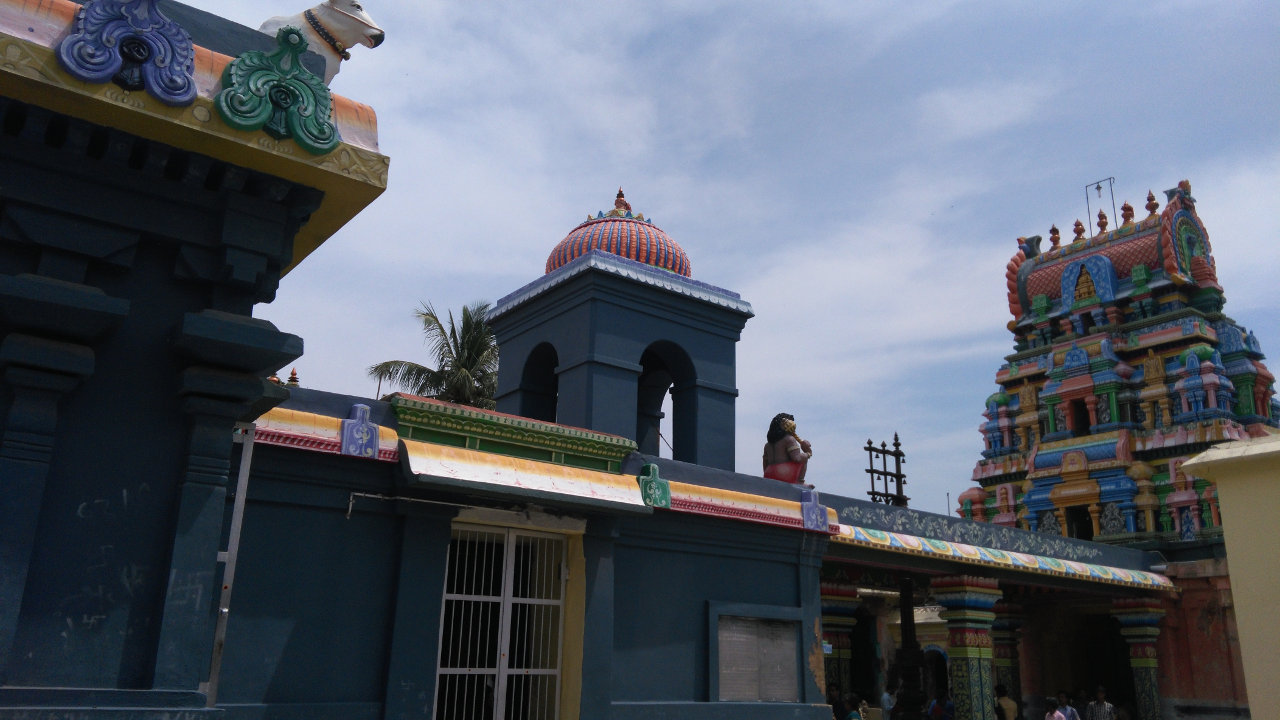 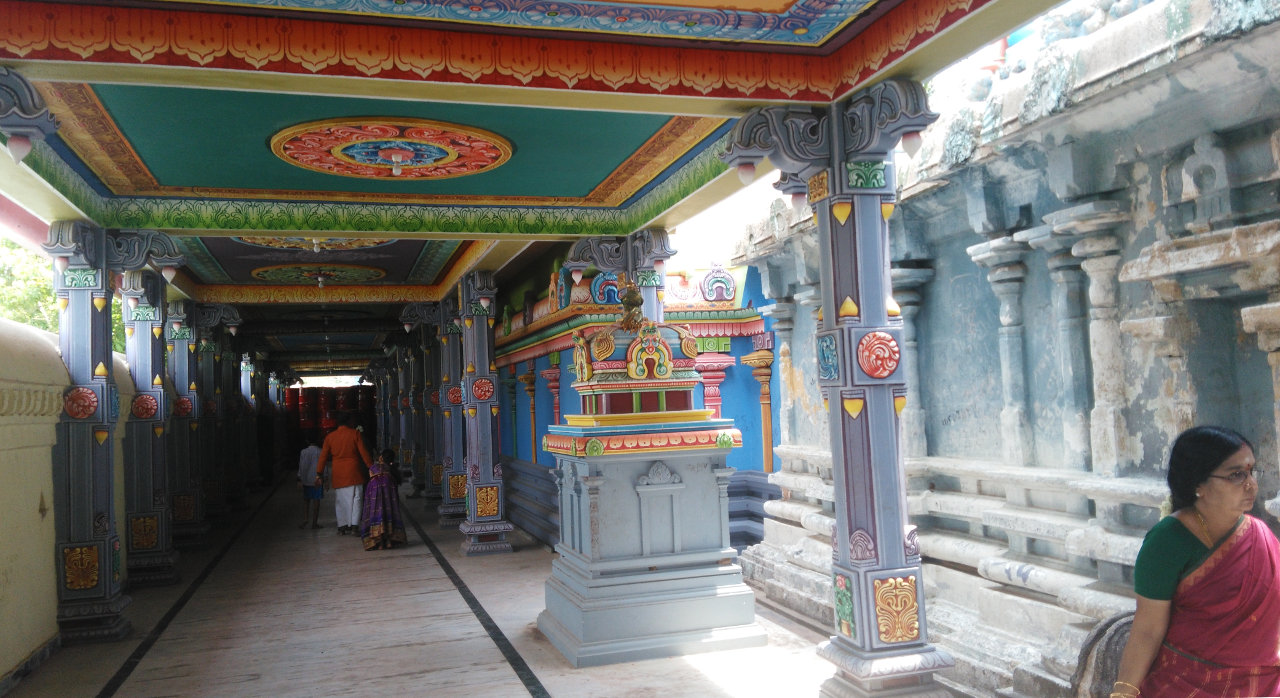 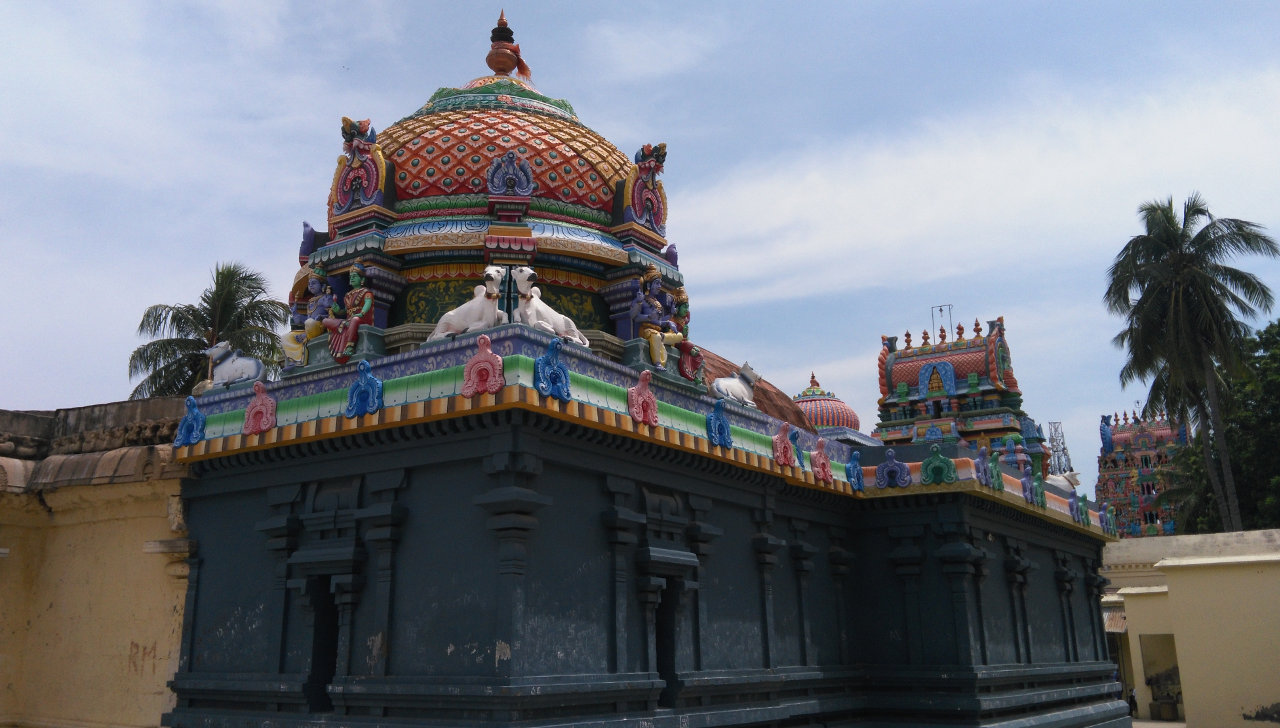