This temple is believed to have been originally built by King Kochengat Cholan.

It was later renovated by King Rajendra Chola and Sembian Maadevi.

There are seven stone inscriptions available in this temple which relate to the periods of Chola and Pandiya kingdoms.

This temple is under the administrative control of the Thiruppukalur Velakurichi Aadheenam. 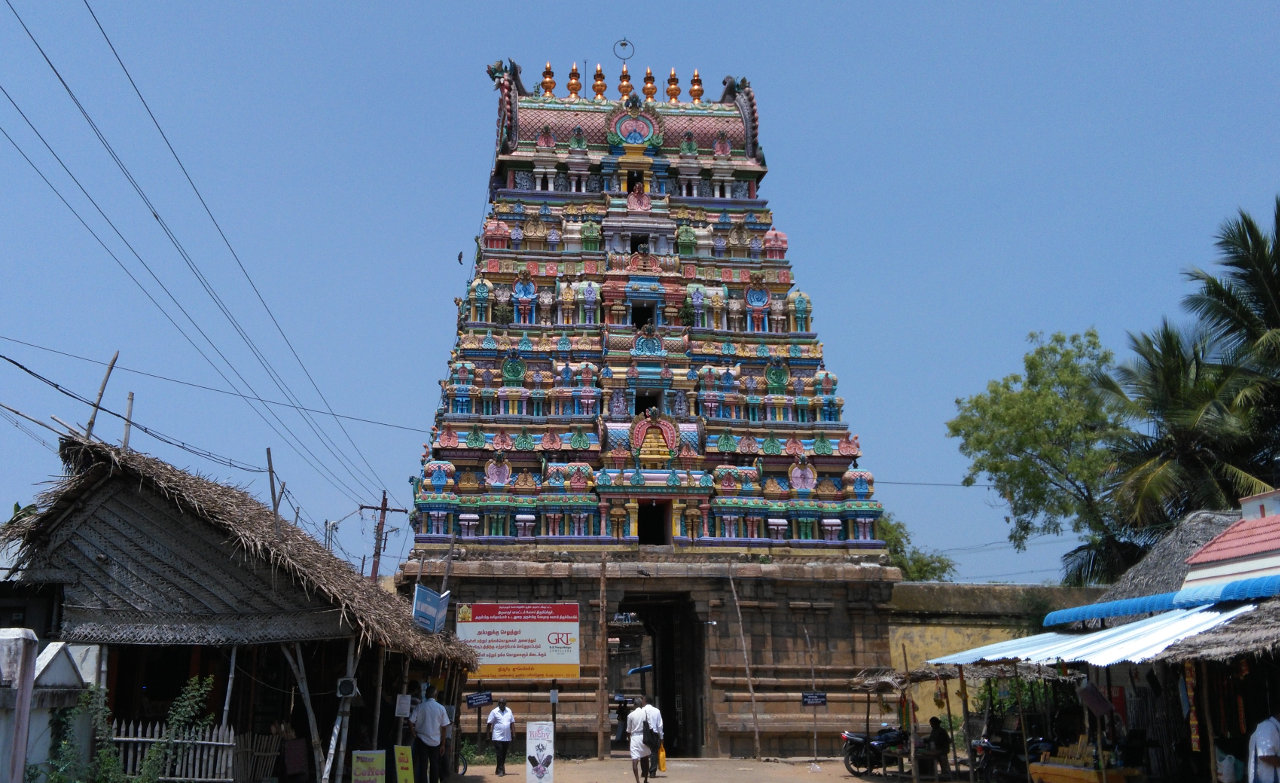 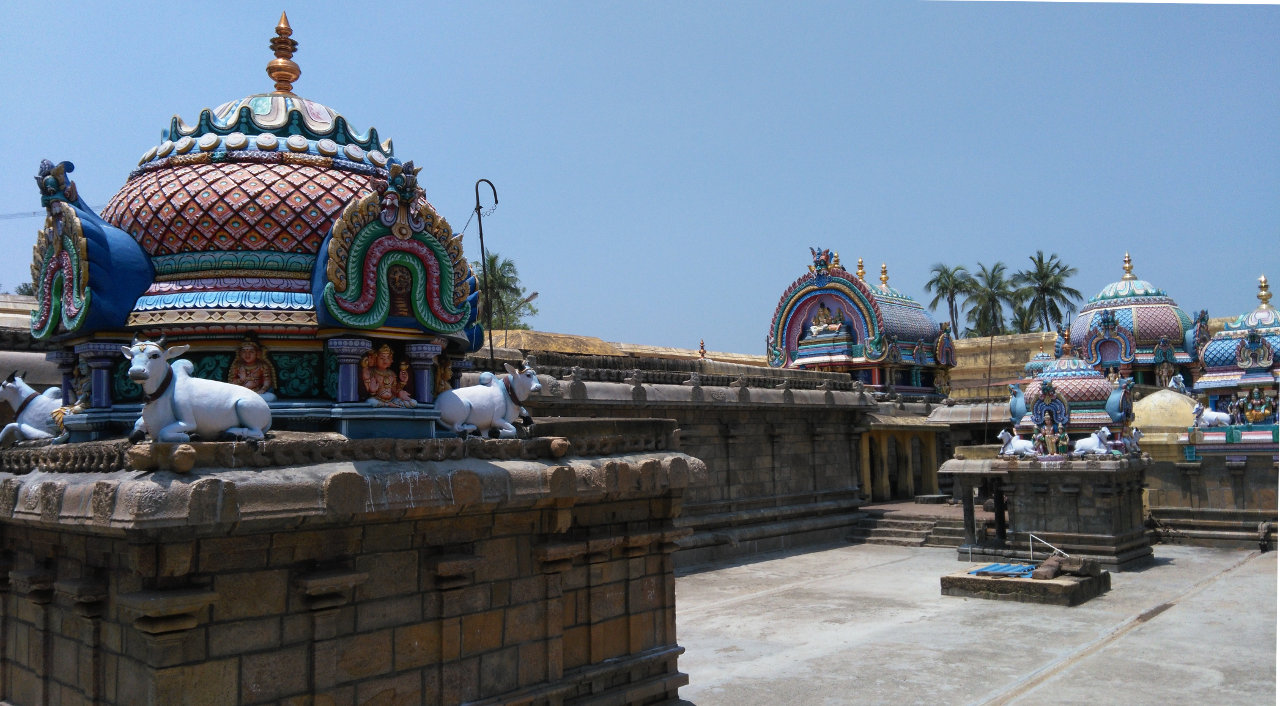 The legend associated with this temple is that of Sage Kashyapa Maharishi. It is believed that this is the birth place of Sage Kashyapa Maharishi’s sons, Arunan and Garudan from his two wives. Arunan was physically handicapped. He was a staunch devotee of Lord Shiva and is believed to be the charioteer of Lord Suryan. Arunan wanted to visit Mount Kailash to have darshan of Lord Shiva. He asked Lord Suryan for his permission to go to Mount Kailash. Suryan not only denied him but also laughed at him pointing out his disability.

Because of their affairs with Mohini, Lord Shiva cursed Indra and Suryan. Owing to this curse, Lord Indra was dethroned by King Mahabali and Lord Suryan lost his brightness.

Since Suryan’s body was blackened, the universe lost the light of the day. Suryan pleaded to the lord to forgive him. The lord asked him to go to Thirumiyachur (this place) and worship him here for seven months. As advised by the lord, Suryan performed rigorous penance here. He placed idols of Lord Shiva and Goddess Parvathy on an elephant and took them to the clouds. Hence the Sanctum’s tower (Vimanam) is in the shape of “Gaja Brishta” (rear portion of an elephant). The lord is praised as “Sri Meganathar” (“Megam” means cloud in Tamil).

Since he did not regain his brightness even after his penance, Suryan approached Lord Shiva screaming in grief. The goddess who was alone with Lord Shiva got disturbed by Lord Suryan’s cries. She got angry and was about to curse him but the lord pacified her by saying that Suryan was already suffering from a curse and was looking for relief. It is believed that Suryan was relieved of his curse by Lord Shiva.

Since Lord Shiva pacified Goddess Parvathy, she is also praised here as “Shanta Naayagi” (“Shantam means calm in Tamil). Also, when Lord Shiva tried to pacify Goddess Lalithambigai, it is believed that 8 angels called “Vachinies” (personification of speech) emerged from the mouth of Lalithambigai and they started praising the goddess with her 1000 holy names. Pleased with their praises, Goddess Lalithambigai regained her composure.

This pacifying scene is beautifully depicted in a sculpture which can be seen in the outer corridor. This Lord Shiva’s idol is called “Kshetra Puraaneswarar”, and he is seen holding Goddess Parvathi’s cheek to pacify her. From one angle, the Goddess appears to be in anger whereas from the other angle she looks very calm. This sculpture is one of the key attractions of this temple. 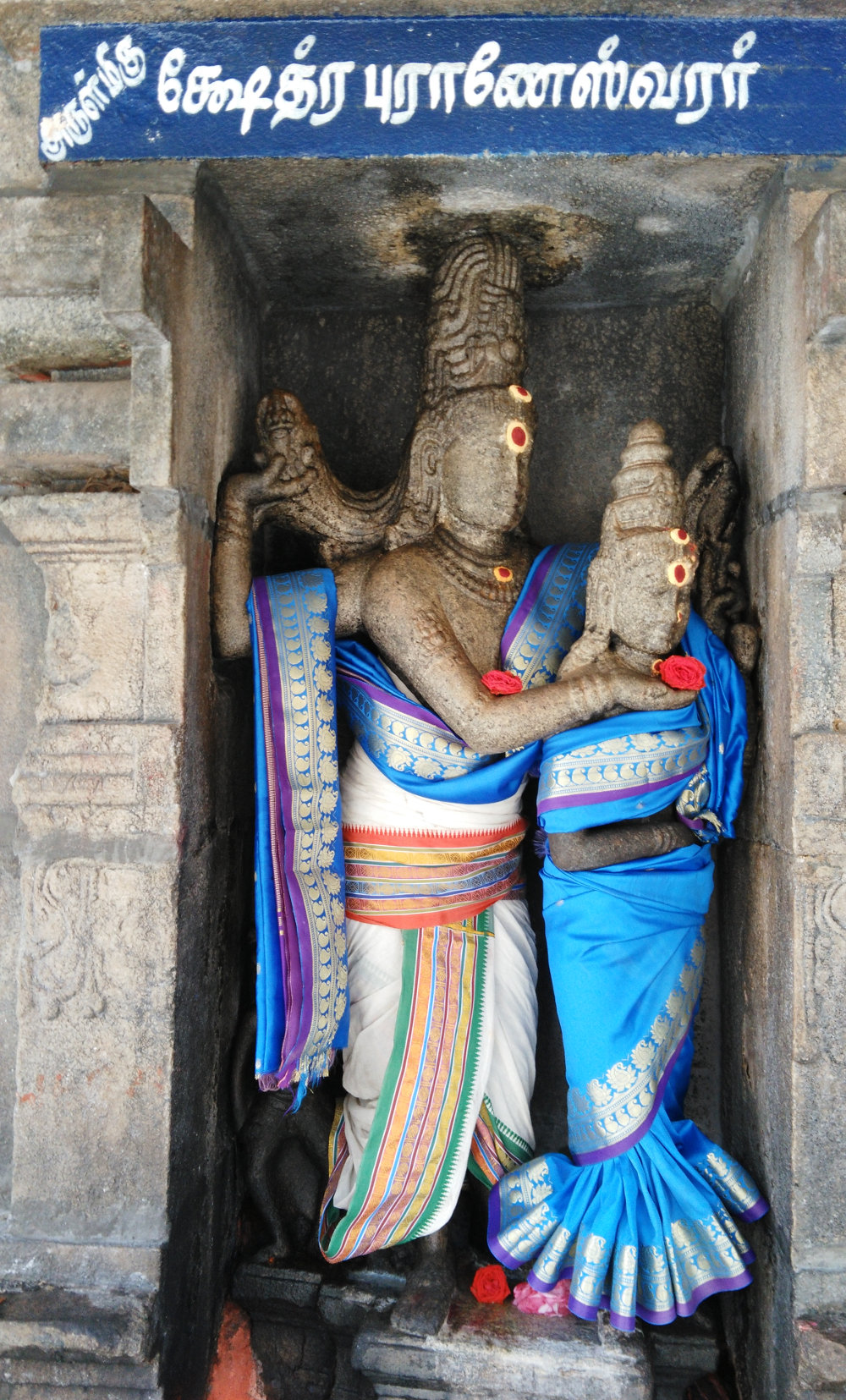 Another legend associated with this temple is that Lord Hayagreevar, a disciple of Goddess Lalithambigai, conveyed to Sage Agasthiyar about the significance of “Lalitha Sahasranamam”. On his advice, Agasthiyar came to this temple and worshiped Lord Shiva and Goddess Parvathy. She is believed to have granted darshan to Saint Agasthiyar in the form of “Navratna” (nine precious stones). After this darshan, the saint rendered his songs “Navaratna Malai” praising the goddess. He has also composed another hymn here called “Rahasyanamasahasram”.

It is believed that Yama, the Lord of Death, worshiped Lord Shiva here by performing an abhishekam using 1008 conches and offering “Pirandai rice” (a green creeper mixed with rice) for his longevity.

As per the sthala puranam, it is believed that this is the birth place of Saneeswarar, Yama, Arunan, Karudan, Vali and Sukreev.

An interesting incident took place here in 1999. It is believed that a devotee from Bangalore was having recurring dreams in which Goddess Parvathy was asking her for a gold anklet (“Kolusu”). This woman went in search of the goddess and visited many temples but could not find the one of which she had dreamt. Finally, she came to know of Goddess Lalithambigai of Thirumiyachur by chance in a magazine. She recognised the goddess as the one from her dreams. She prepared an anklet and visited the temple. She informed the priest about her dreams and requested him to adorn the anklet on the goddess. The priest told her that it would be difficult to adorn it as there is no way for the anklet to go around her feet. However, she insisted him to try. The priest decided to give it a try and to his surprise, he found a small hole in the idol’s ankle which he could use to adorn the anklet. Later, it is said that they could find holes in her nose which is now adorned with a nose pin (“mookuthi) and a waist belt “(oddiyanam”). Now devotees have started offering “Kolusu” to Goddess Lalithambikai frequently. 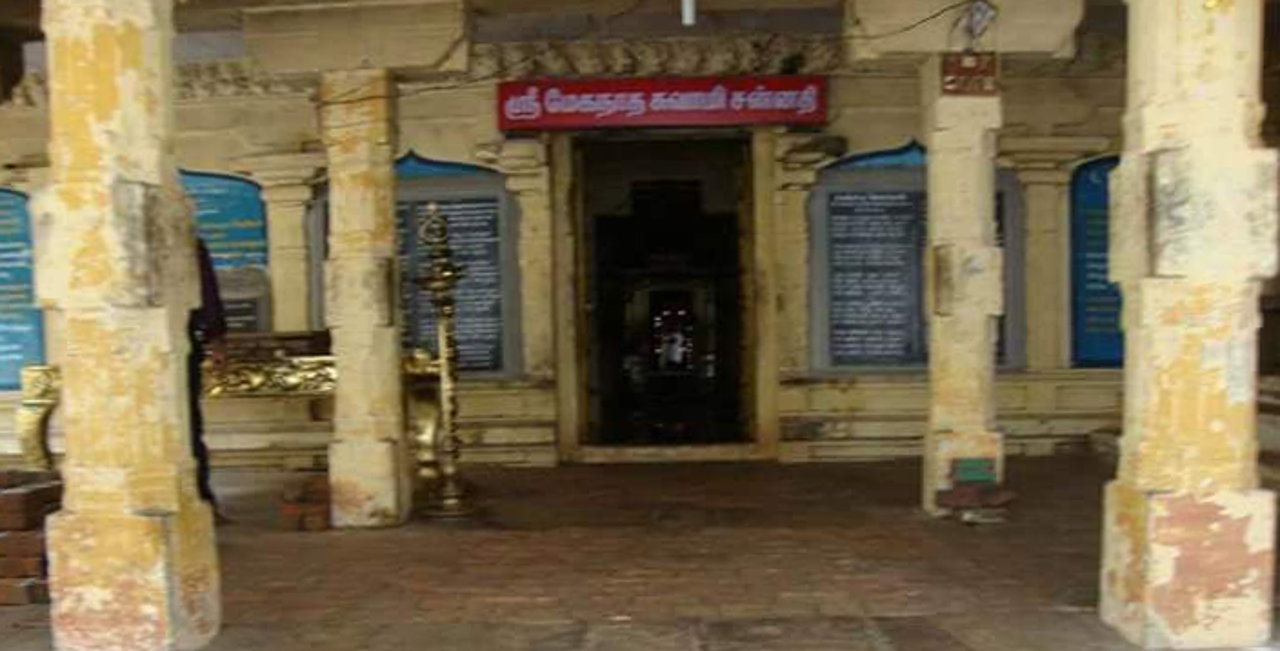 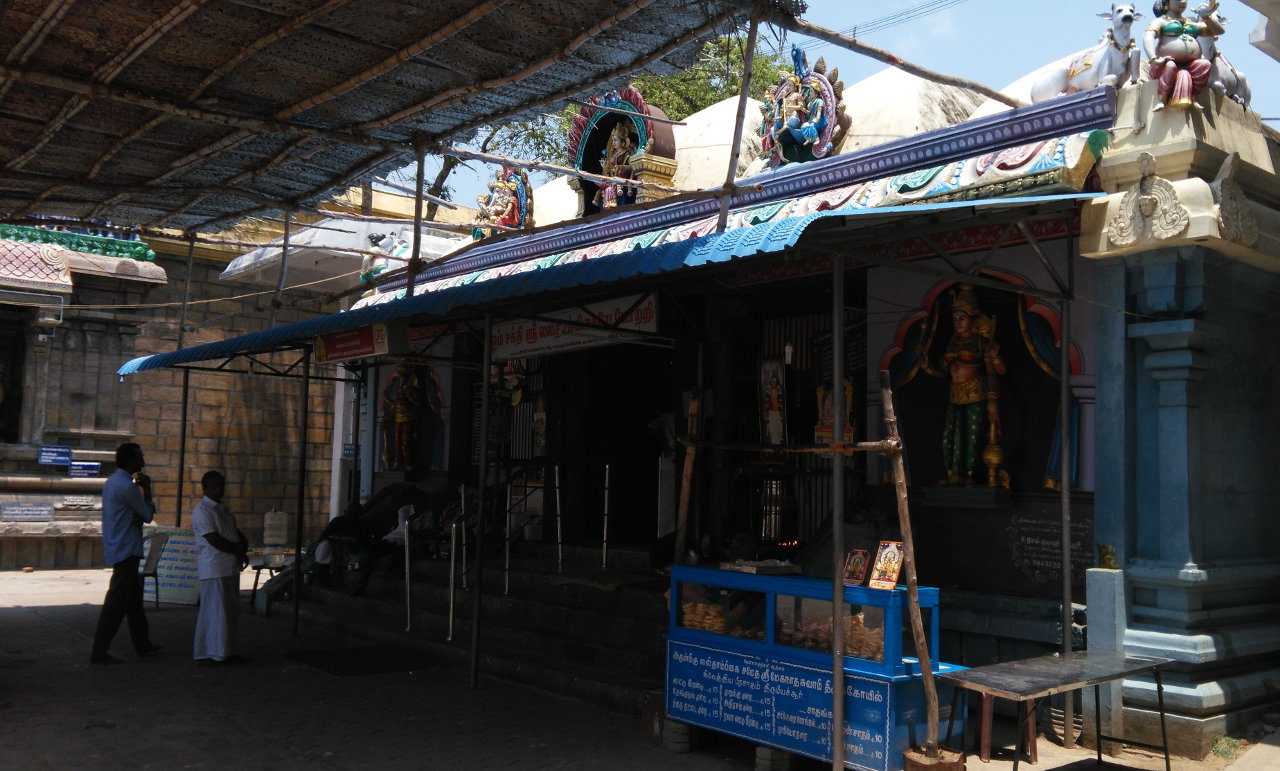 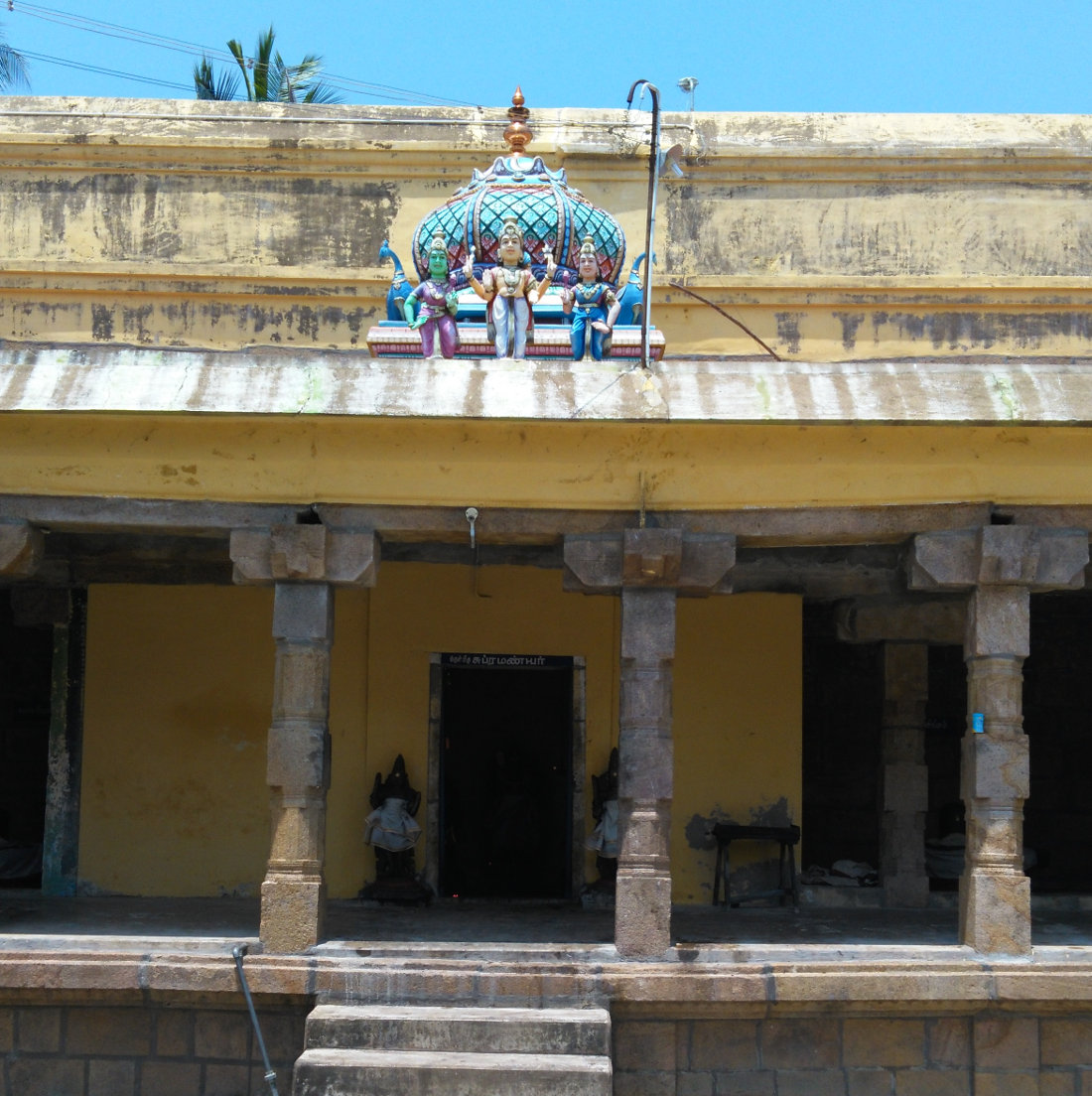 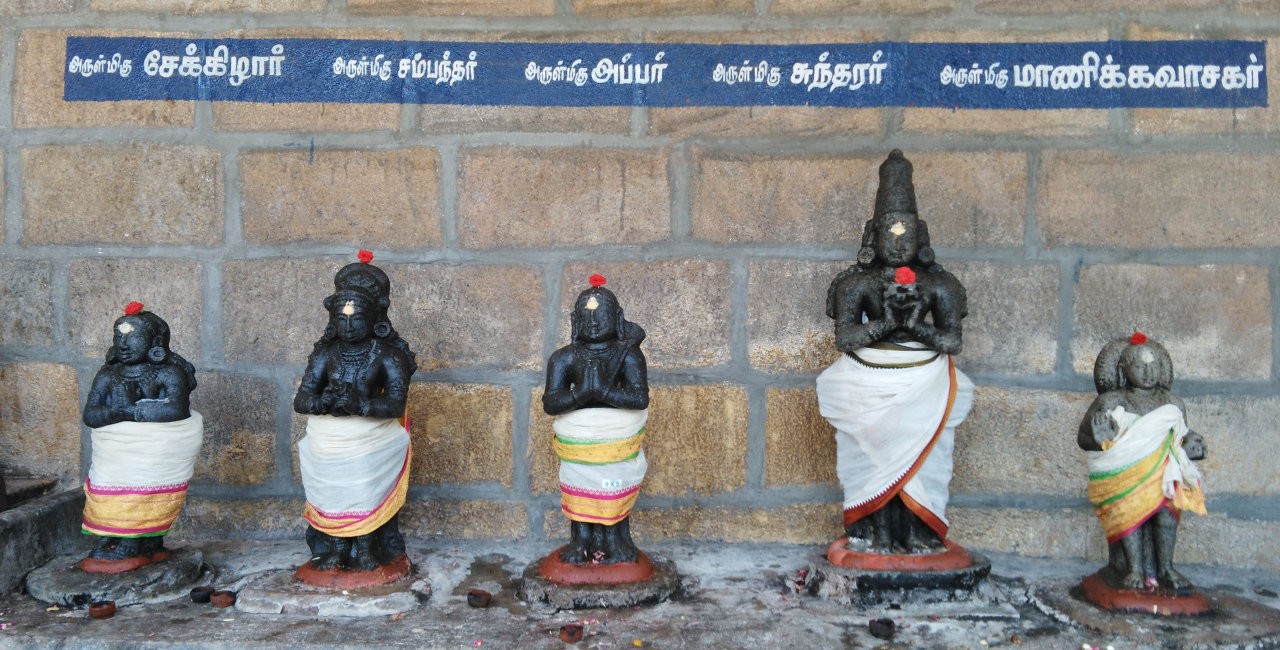 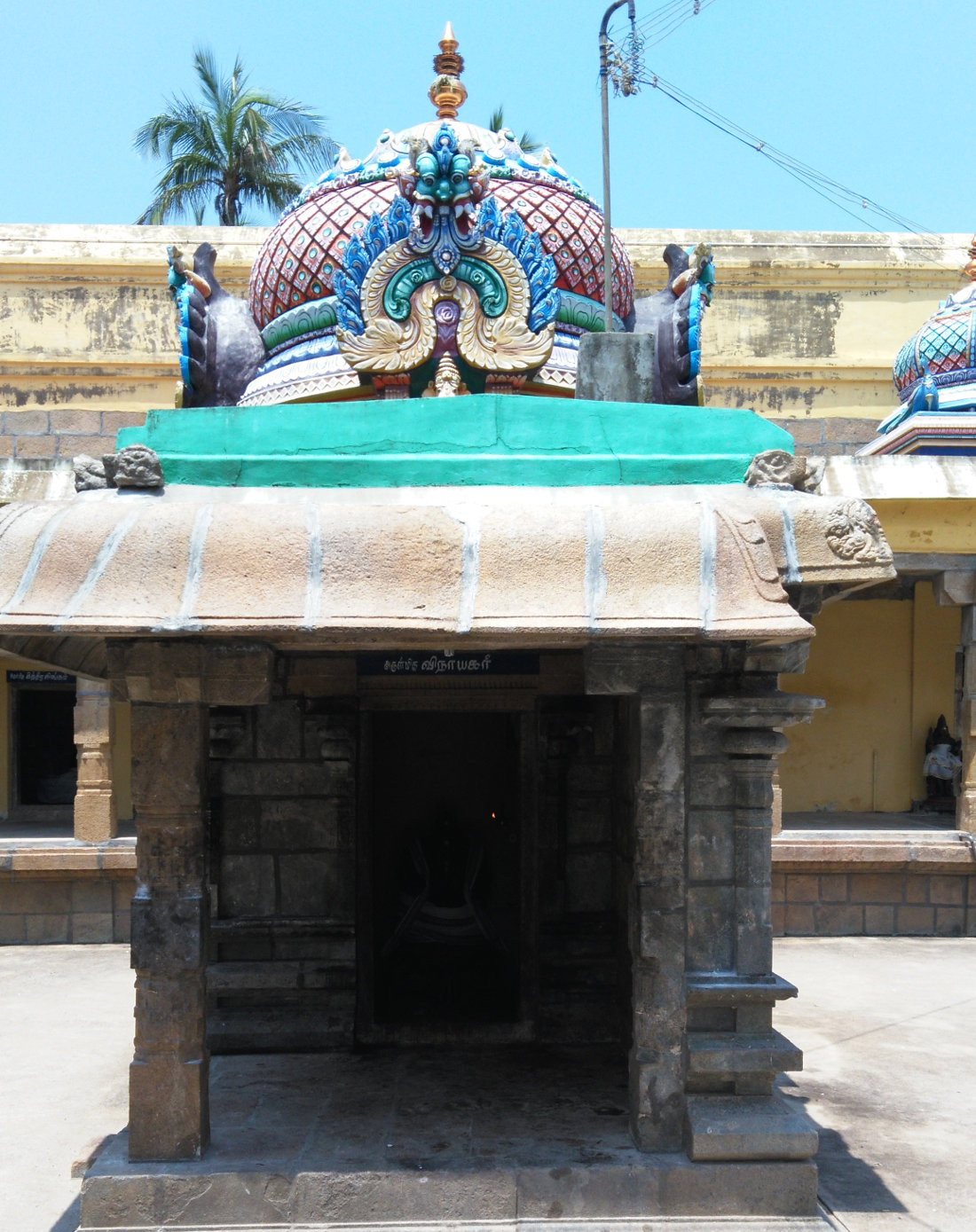 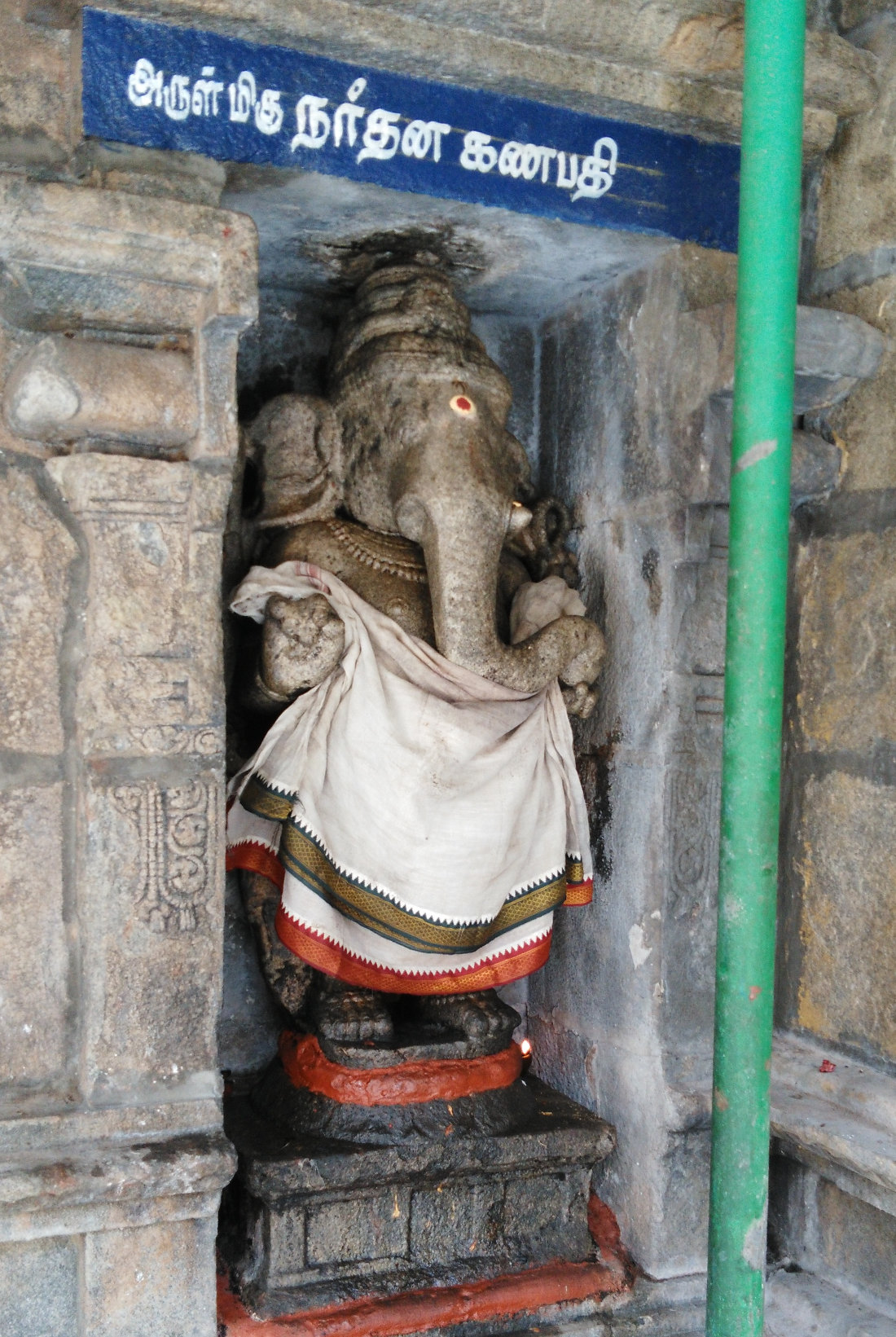 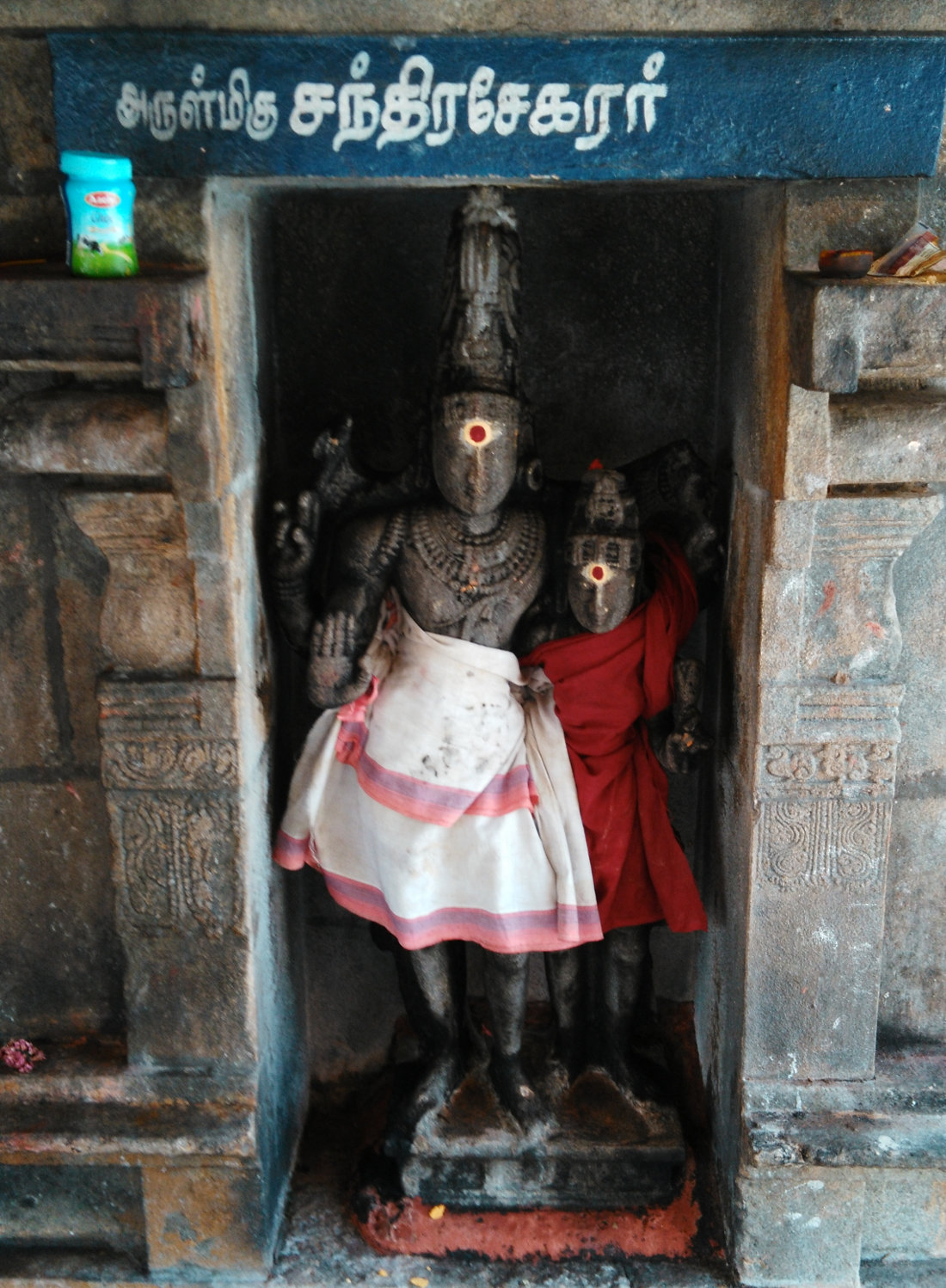 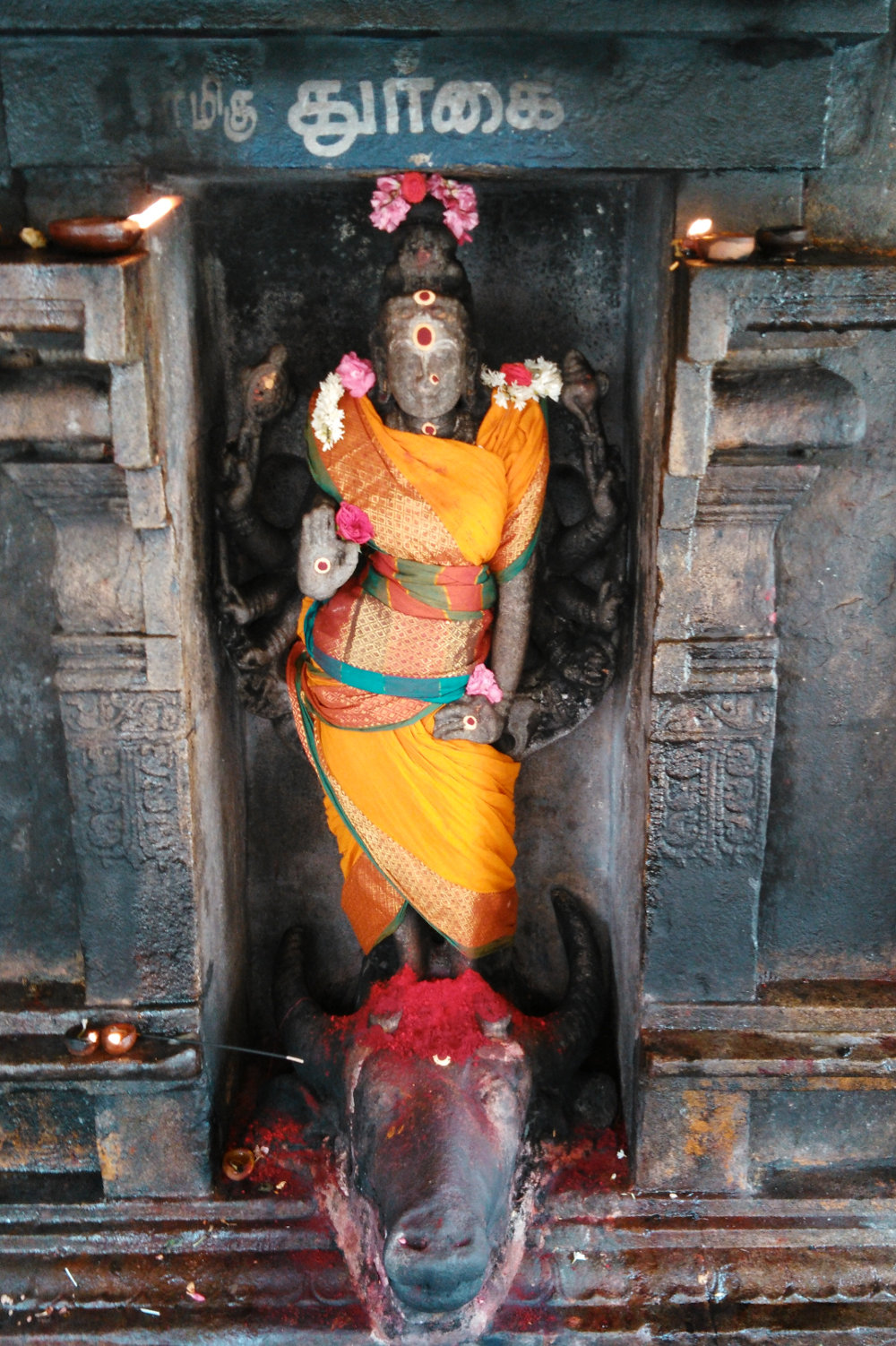 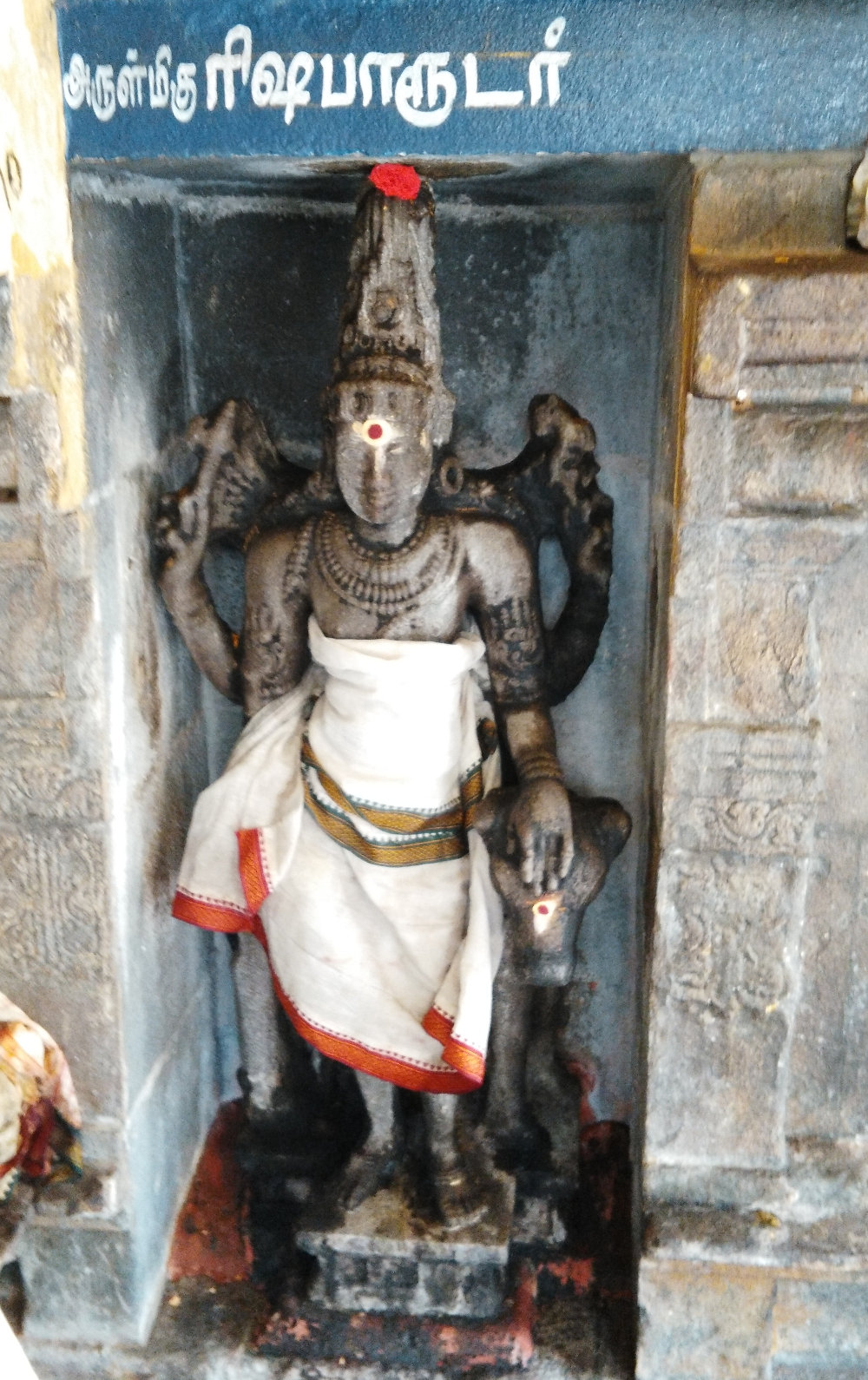 Goddess Parvathy’s posture here is unique and cannot be seen anywhere else as she is depicted in a seated posture. The imposing five feet idol of Goddess Parvathy is installed over Sri Chakra in the sanctum. She is seated majestically, resting her folded right leg on the seat. Her left leg is in “Sukhasana” posture. She is said to be in “Manonmani Swaroopam” and hence is also known as Sri Shantha Nayaki.

Goddess Parvathy of this temple is praised as Sri Lalithambigai. This name itself is quite unique as we cannot see her praised by this name in other temples.

Another significance of this temple is that one can get the darshan of the lords of two temples from a single complex – Sri Meganathaswamy and Sri Sahalabhuvaneswarar.

Behind the sanctum sanctorum, on either sides of Lord Lingothbavar, there are idols of Lord Mahavishnu and Lord Brahma in a worshipping posture. Devotees can enjoy the darshan of all the three lords (Trimurthys) – Brahma, Vishnu and Shiva from one place. This is considered to be very auspicious. 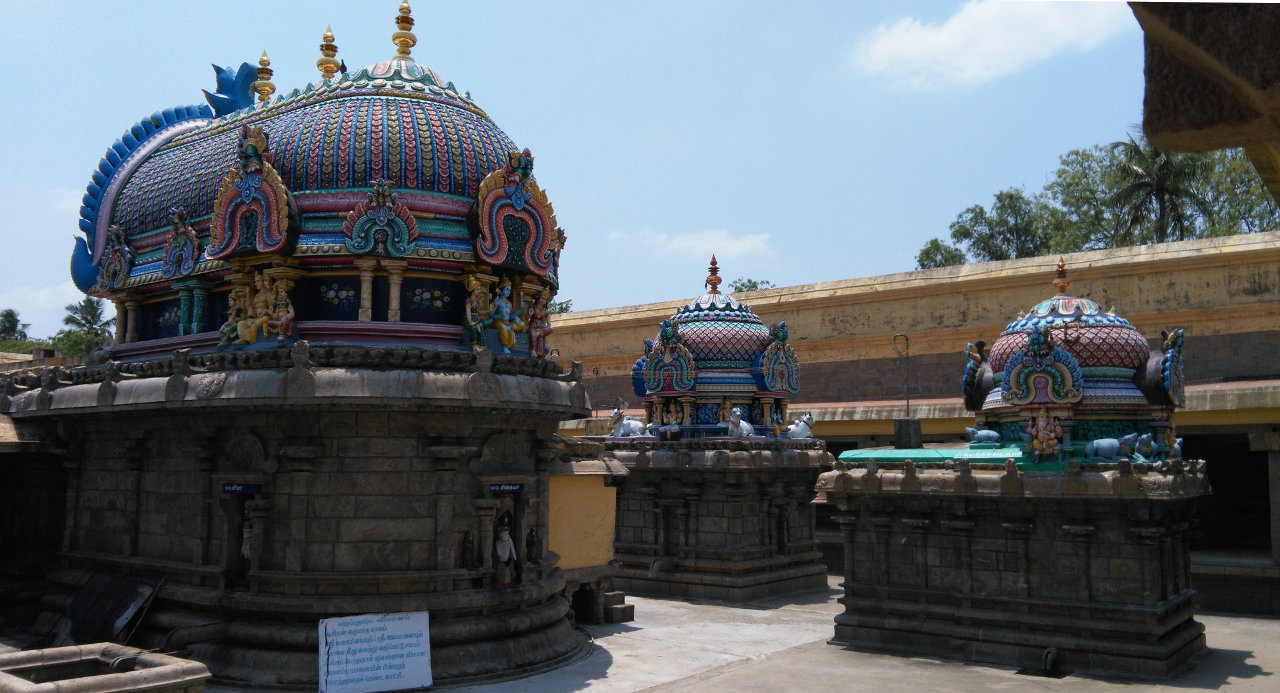 The shrine of Goddess “Asthabhujanga Durga” (Durgai with 8 hands) in the outer corridor is of special significance. She is holding a parrot in her right hand which is supposed to be taking our messages to Goddess Lalithambigai. Devotees, who want their wishes to come true can convey the same to Goddess Lalithambigai through this Goddess Durgai. We can still see some parrots in this temple.

It is believed that King Kochengat Chola built 70 “Madakkoils”. The distinguishing feature of a Madakkoil is that it is not easily approachable by an elephant. He built these temples at an elevation and there are a few steps that need to be climbed before seeing the lord. Also, the sanctum sanctorum’s (Karpagragam) entrance is narrow such that no elephant can enter it.

The vimana (roof tower) of the sanctum sanctorum is designed in a special style of architecture called the Gaja Brishtam. This makes the vimanam looks like the rear of an elephant (Gaja - elephant, brishtam - rear).

In this temple, we can see many beautiful sculptures and towers which speak about the architectural beauty and excellent craftmanship of the Chola period.

It is believed that Lord Suryan (Sun) worships Lord Shiva of this temple by directing his rays on the lingam for seven days (21st to 27th) in the Tamil month of Chithirai (April). Surya Puja is performed here during these days. 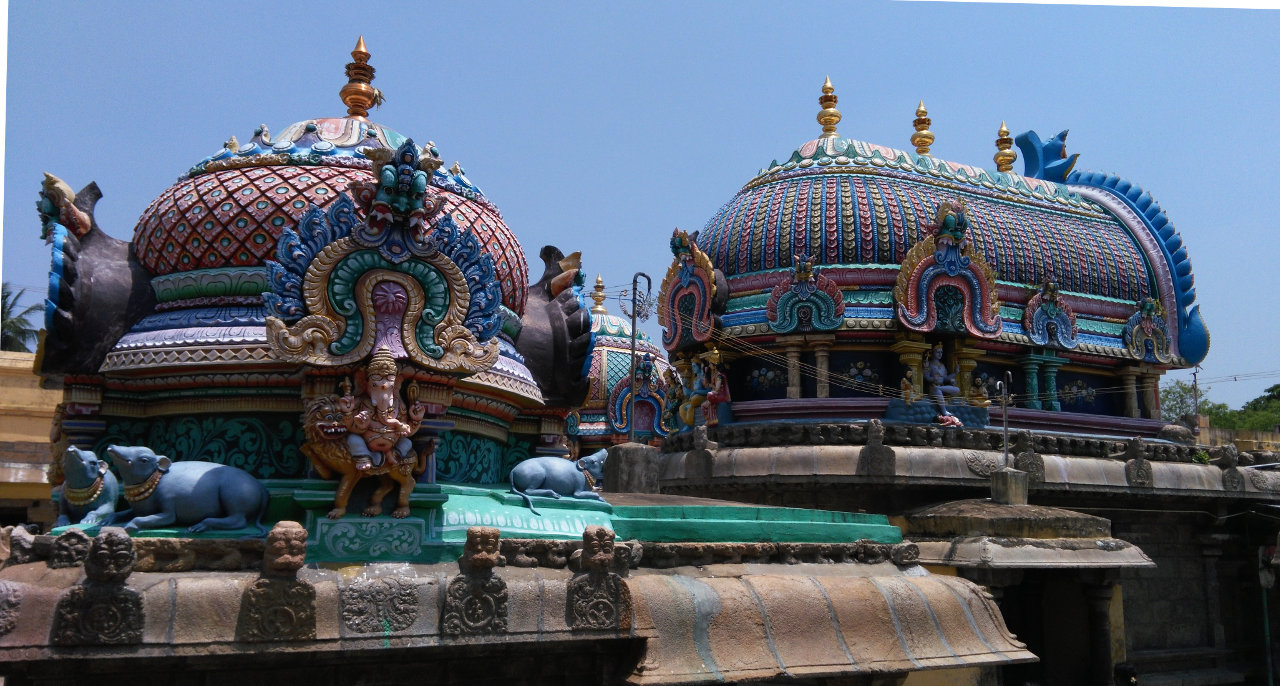 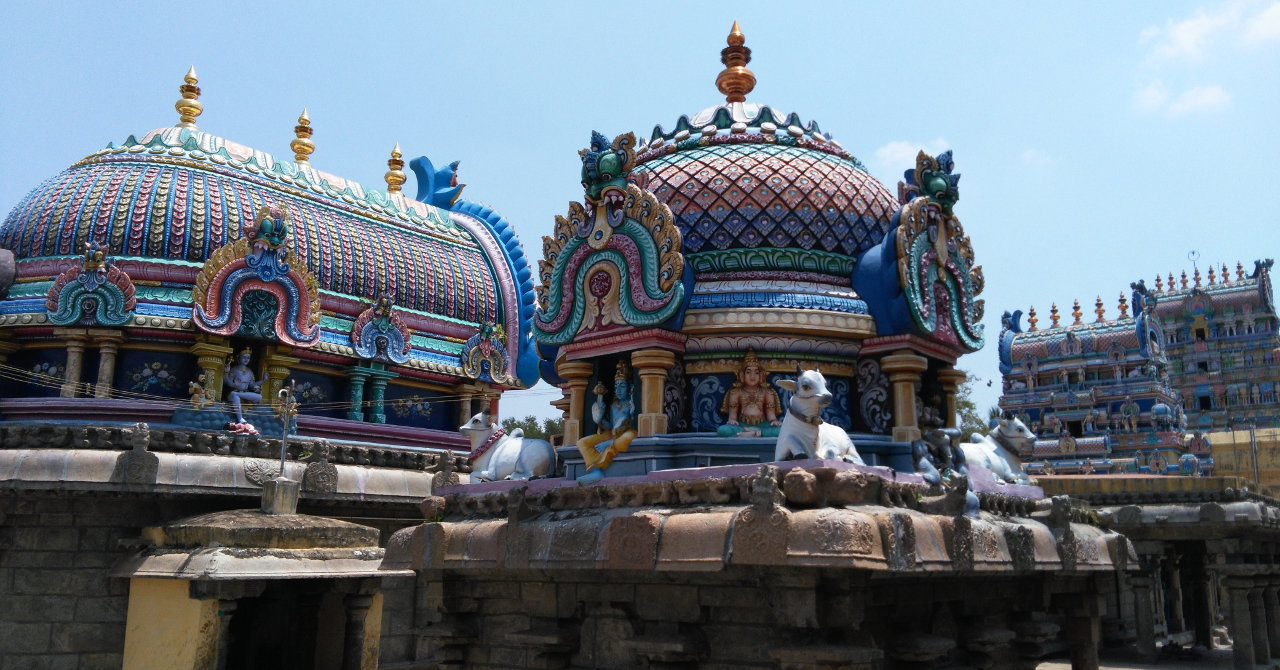 Devotees believe that by reciting “Lalitha Sahasranamam” and “Lalitha Navarathnamala” here, they would receive the blessings of Goddess Parvathy.

Devotees also make offerings of rice mixed with “Pirandai” (a green vegetable), placed on a lotus leaf, to the lord and then distribute it to the people. By doing so, it is believed that they would be blessed with longevity and would be relieved from their ailments.

Being a Shakti Peet, it is believed by devotees that by worshiping the goddess here, they would be relieved from all kind of “doshas”.

It is also believed that Lord Saneeswaran and Lord Yama were born to Lord Suryan here. Hence, it is considered auspicious to perform poojas on birth anniversary (“Aayushyahomam”), 61st birthday (“Sashtiyapthapoorthy”) and 81st birth day (“Sadabishekam”).

A famous pooja that is celebrated here is “Annappaavaadai”. During this pooja, a large quantity of rice mixed with jaggery is placed on the floor and a few litres of ghee is poured on top of it. During this offering, the reflection of the goddess can be seen on the ghee. This pooja is performed three times in a year – on Vijayadasami day during Navratri, Ashtami day in the Tamil month of Masi and Vaikasi full moon day.

Almost all other festivals related to Lord Shiva are celebrated in this temple in a grand manner. 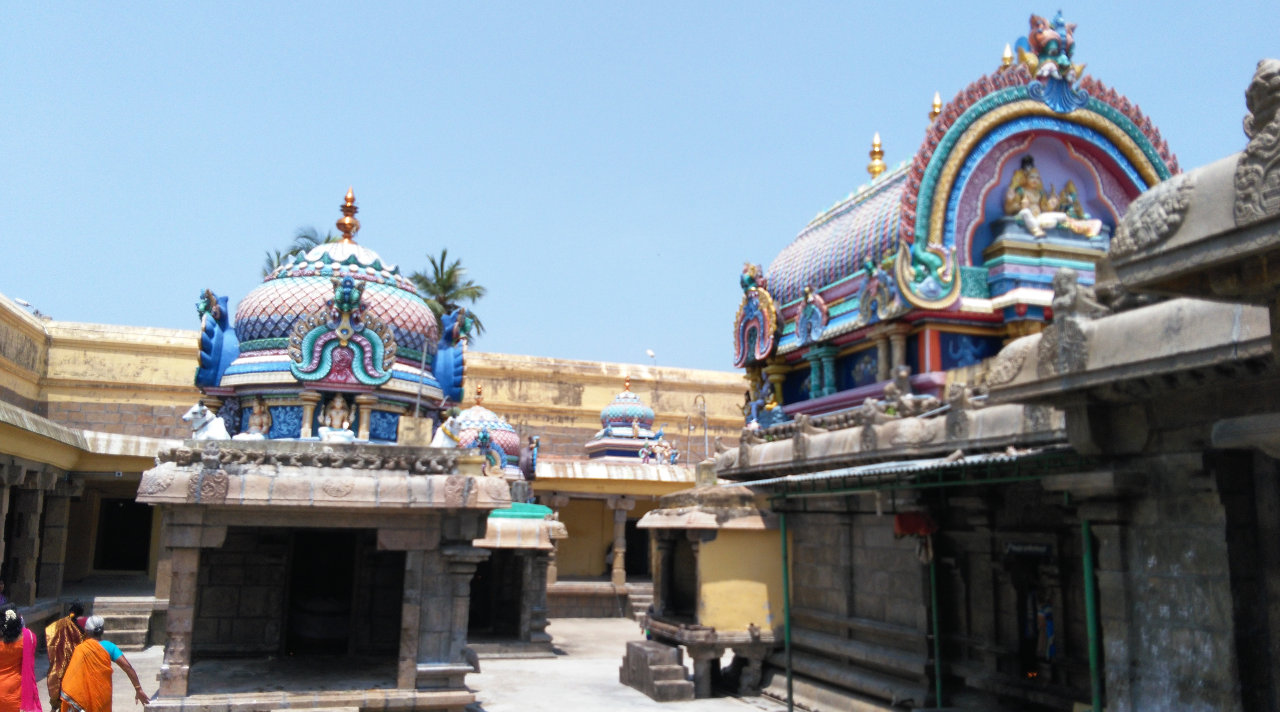 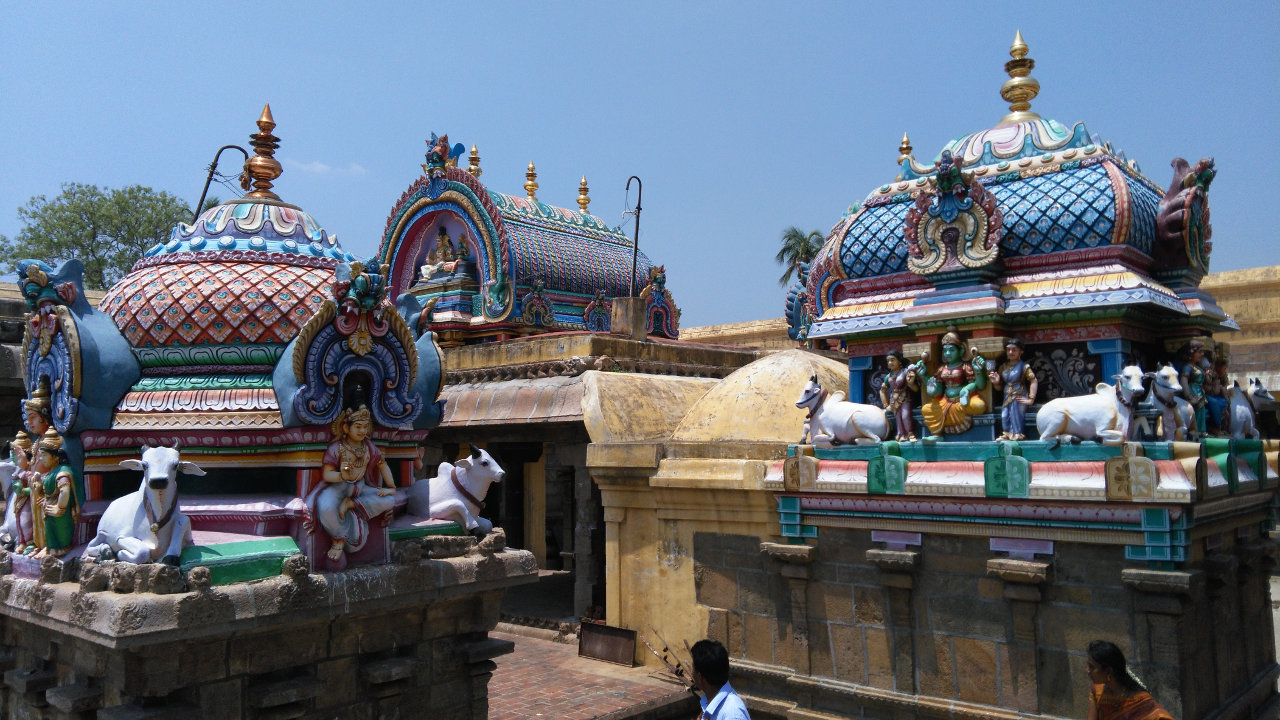 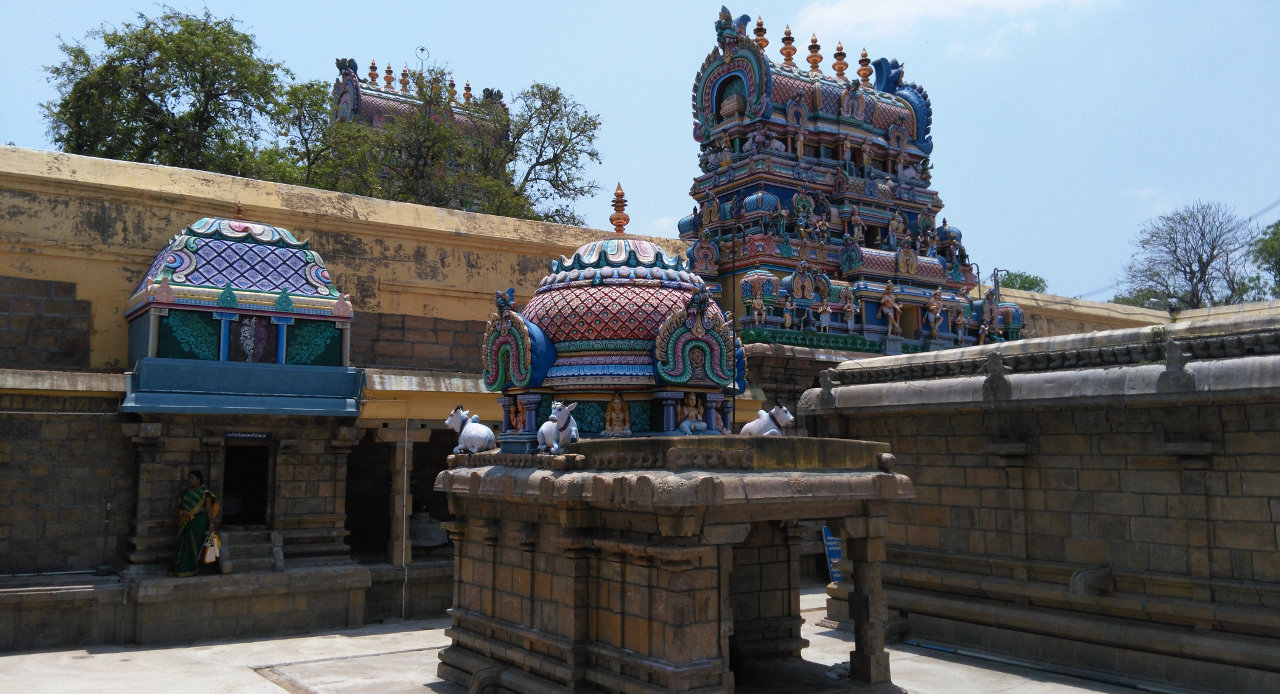