Thiruneelakkudi (Thennalakkudi) is situated at a distance of about 15 kms from Kumbakonam on the Kumbakonam to Karaikkal route. From Aduthurai, this temple is about 3 kms on the Aduthurai to Thiruvarur route.

Nearest railway station is Aduthurai which is about 4 kms away from this temple.

There are 4-5 stone inscriptions available in this temple. According to these inscriptions, this ancient temple is believed to have been built by Chola kings Rajarajan and Vikrama Chola.

When a devotee hears the name Thiruneelakkudi, he is immediately reminded of the “oil abhishekam of the lord”.

This temple’s Sthala Viruksham (Pancha Vilva tree) is very significant, hence this place is known as “Pancha Vilvaaranya kshetram”.  Often five leaves of this Vilva tree can be seen together on a twig which is rare.

This temple is under the administrative control of Thiruvavaduthurai Aadheenam. 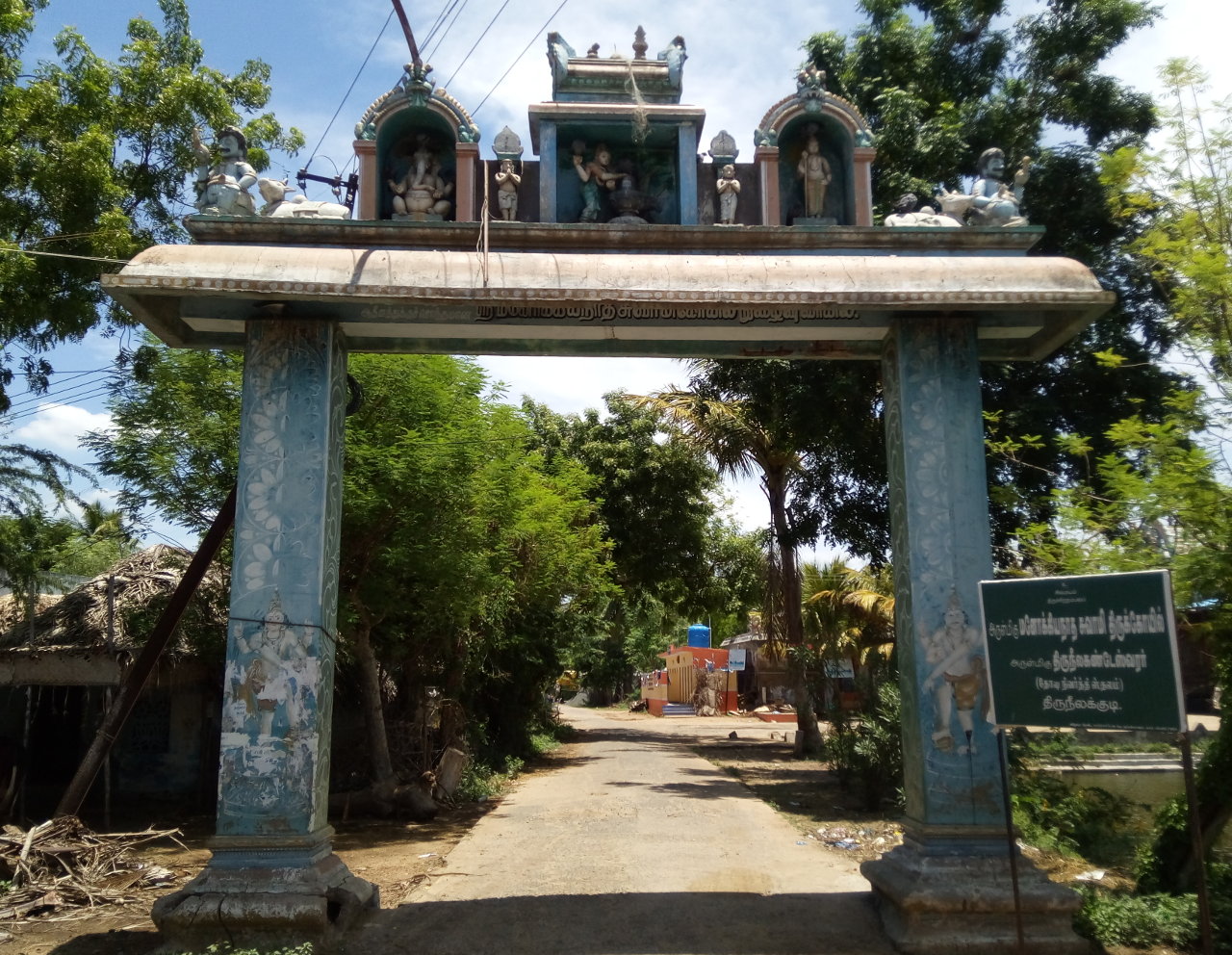 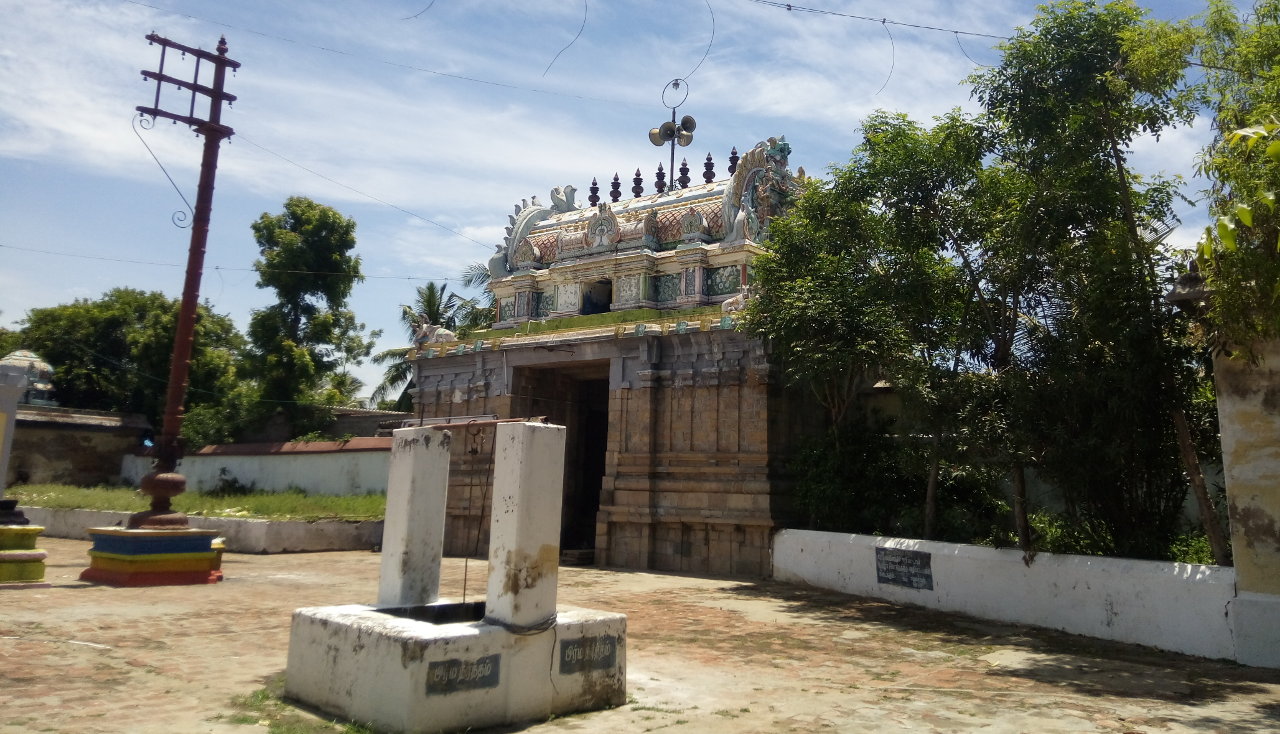 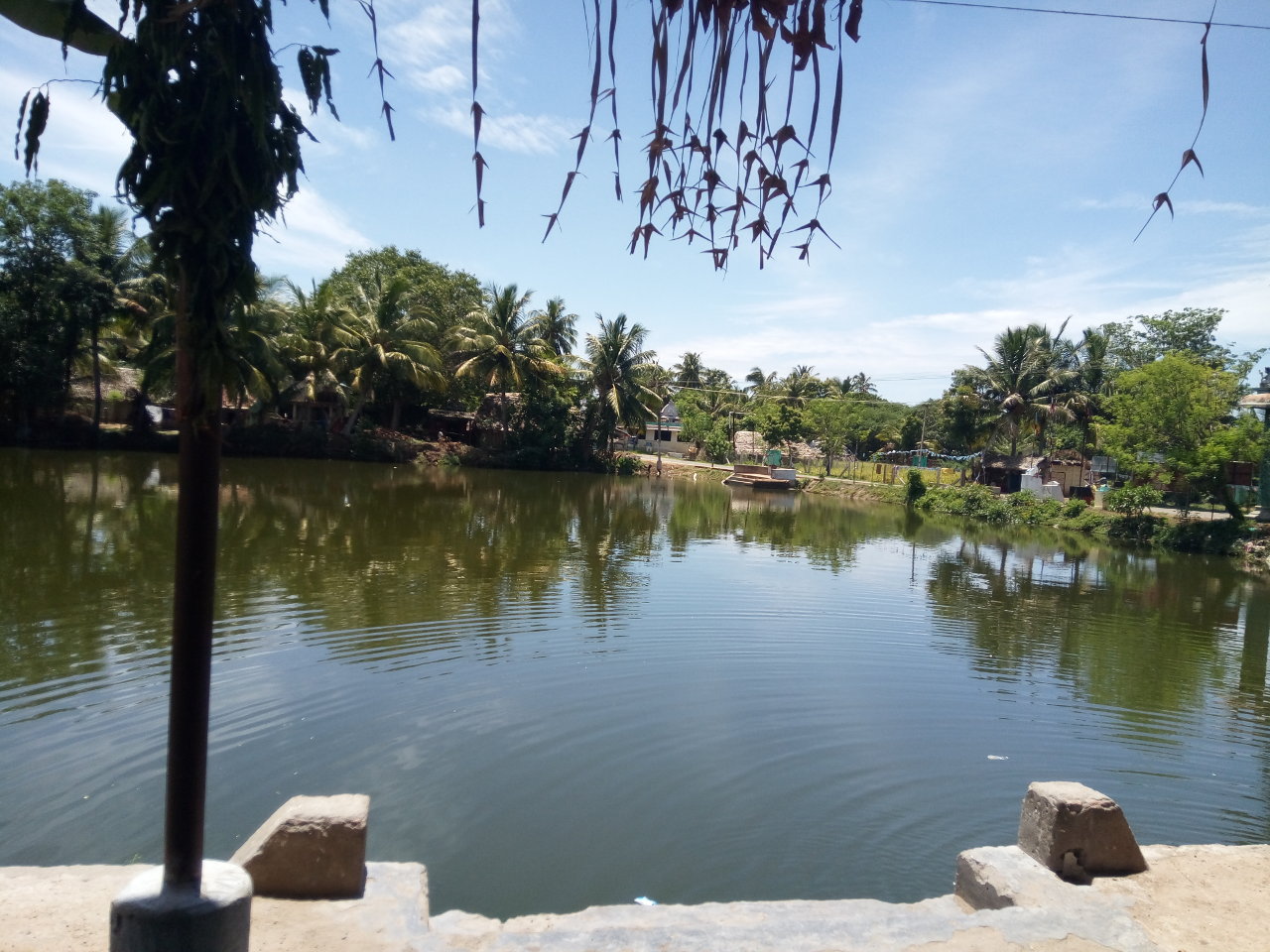 The legend is that when “Thirupparkadal” was churned to find nectar, first instead of nectar poison came out. Lord Shiva consumed this poison. However, in order to stop the poison from entering Lord Shiva’s stomach, Goddess Parvathy held his throat with her hands. The lord’s throat turned blue in colour due to the poison. For this reason, the lord is praised as “Sri Neelakandeswarar” and the place is known as “Neelakkudi”. (“Neelam” means blue and “Kandam” means throat in Tamil).

In this temple, “gingelly (sesame) oil abhishekam” of the lord is very famous. It is believed that to reduce the poison’s effect, Goddess Parvathy performed oil abhishekam to the lord here quite often. It is also believed that the lord informed the goddess that whatever the quantity of oil she offered, it will be absorbed by him in its entirety.

As per the “Sthala Puranam” a fixed quantity of oil is offered to the lord in the Tamil months of Chithirai, Karthigai and Masi. Traditionally, the oil and rest of the items for the pooja are first kept in front of Goddess Parvathy and then taken to Lord Shiva’s shrine for Abhishekam. However, it is a miracle even now that the entire quantity of oil that is used for abhishekam is fully absorbed by the lingam. Interestingly, after a couple of hours, the idol looks as if it has not seen oil in days. It is also interesting to note that the Shivalingam is still rough even after continuous offerings of oil. Hence the lord here is also praised as “Sri Thailapriyangeswarar” (“thailam” means oil and “priyam” means fondness in Tamil).

Another legend associated with this temple is that of Saint Markandeya, son of Sage Mrikandu. Since Sage Mrikandu was informed by an astrologer that his son’s life would be very short, he sought the advice of Sage Vashistar and Sage Narada. On their advice, it is believed that Markandeya visited this temple and worshiped the lord. He also performed gingelly oil abishekam to the lord. Lord Shiva granted him his dharisanam and blessed him with the status of “Chiranjeevi” (“Entrum Pathinaru”). This blessing ensured that Markandeya would attain immortality and would remain 16 years old forever. Enthused by this blessing, Markandeya took the lord in procession to seven nearby villages (“Sapthas Sthanam”). These are -Ilanthurai, Enathi Mangalam, Thirunageswaram, Thirupuvanam, Thiruvidaimaruthur, Maruthuvakkudi and Thiruneelakkudi. This event is commemorated in the Tamil month of Chithirai every year in a grand manner.

Another legend is that Saint Thirunavukkarasar was tied to a granite slab and thrown into the sea by Jains (Samanars). It is believed that he prayed to Lord Shiva of this temple and was able to float and reach the shore. The saint has mentioned this incident in the 7th stanza of his hymn of this temple.

There are two separate shrines for Goddess Parvathy here – one as Sri Anoopamasthani and the other as Sri Bakthapeeshtappradayani.

In Navagraham, rest of the idols are facing Lord Suryan. 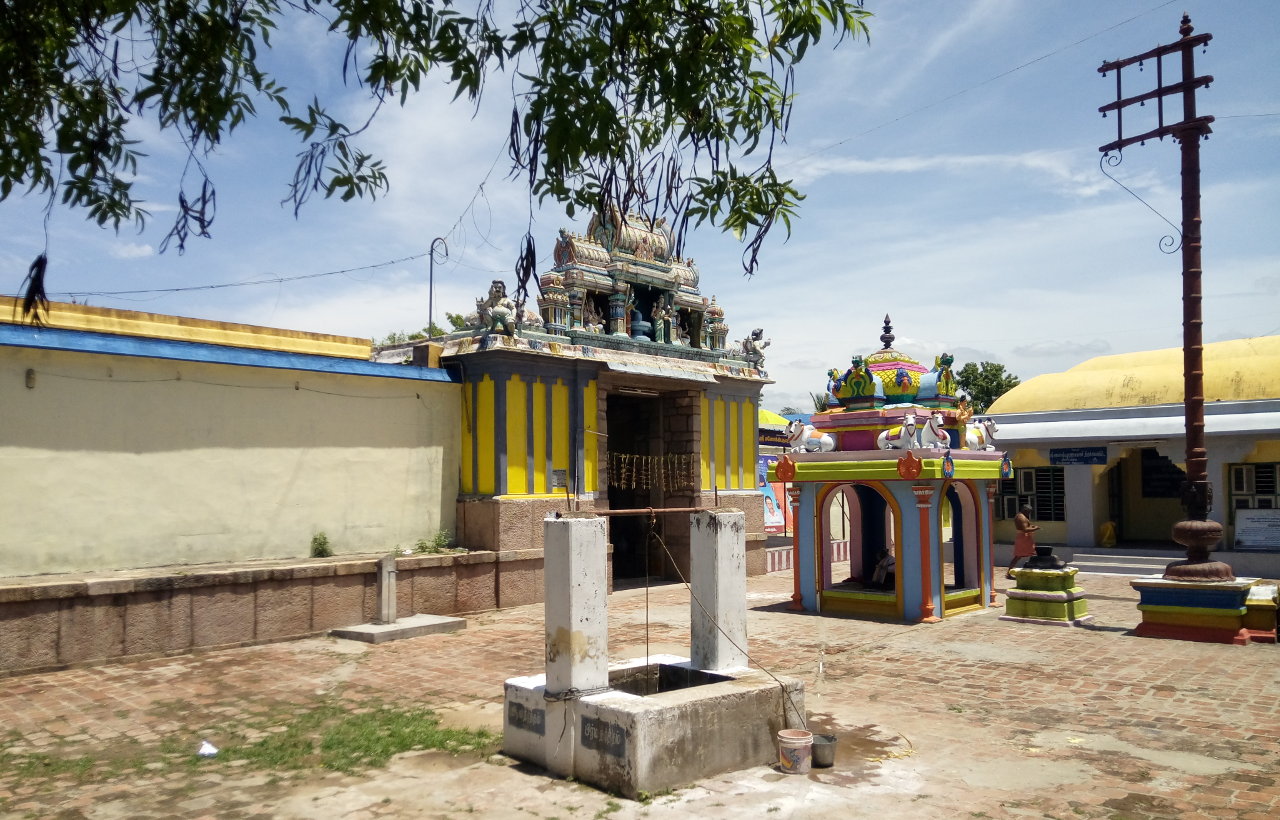 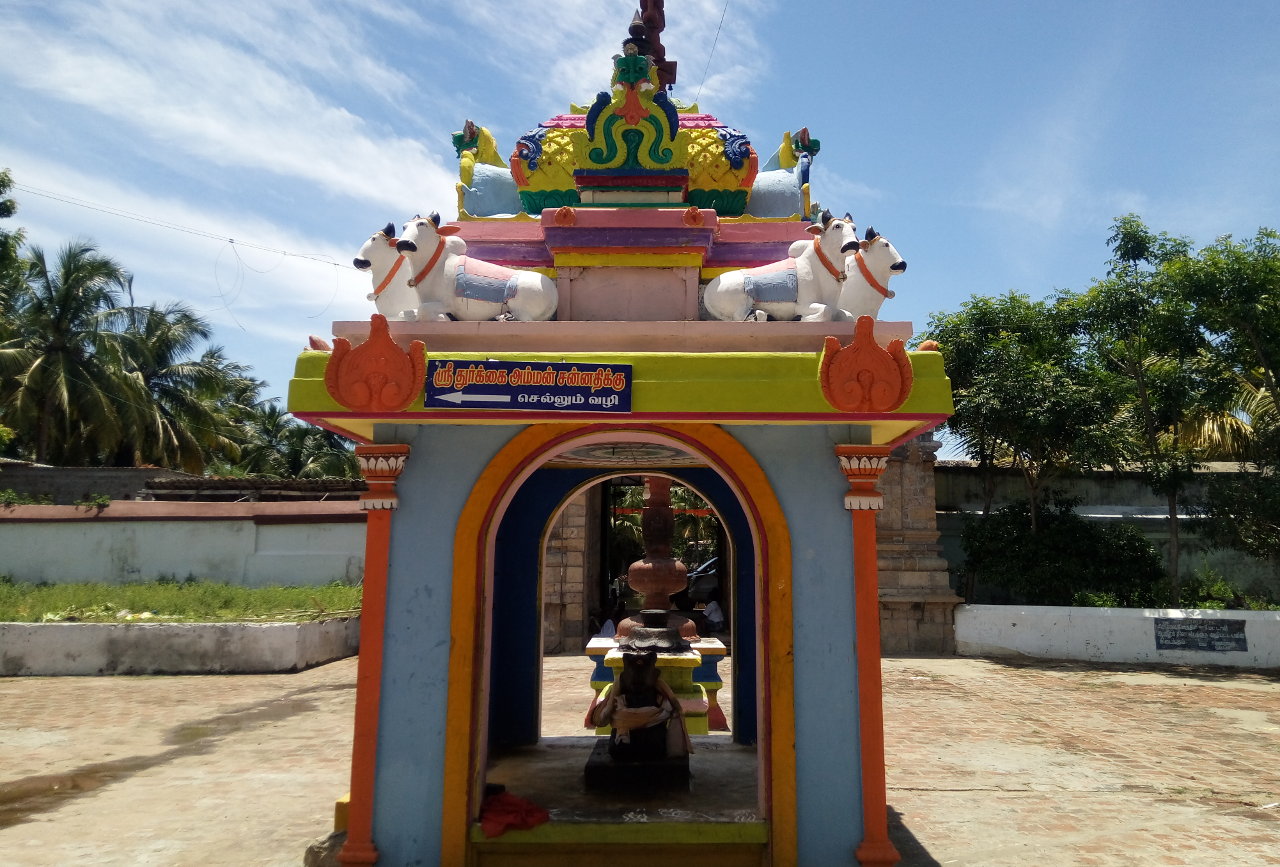 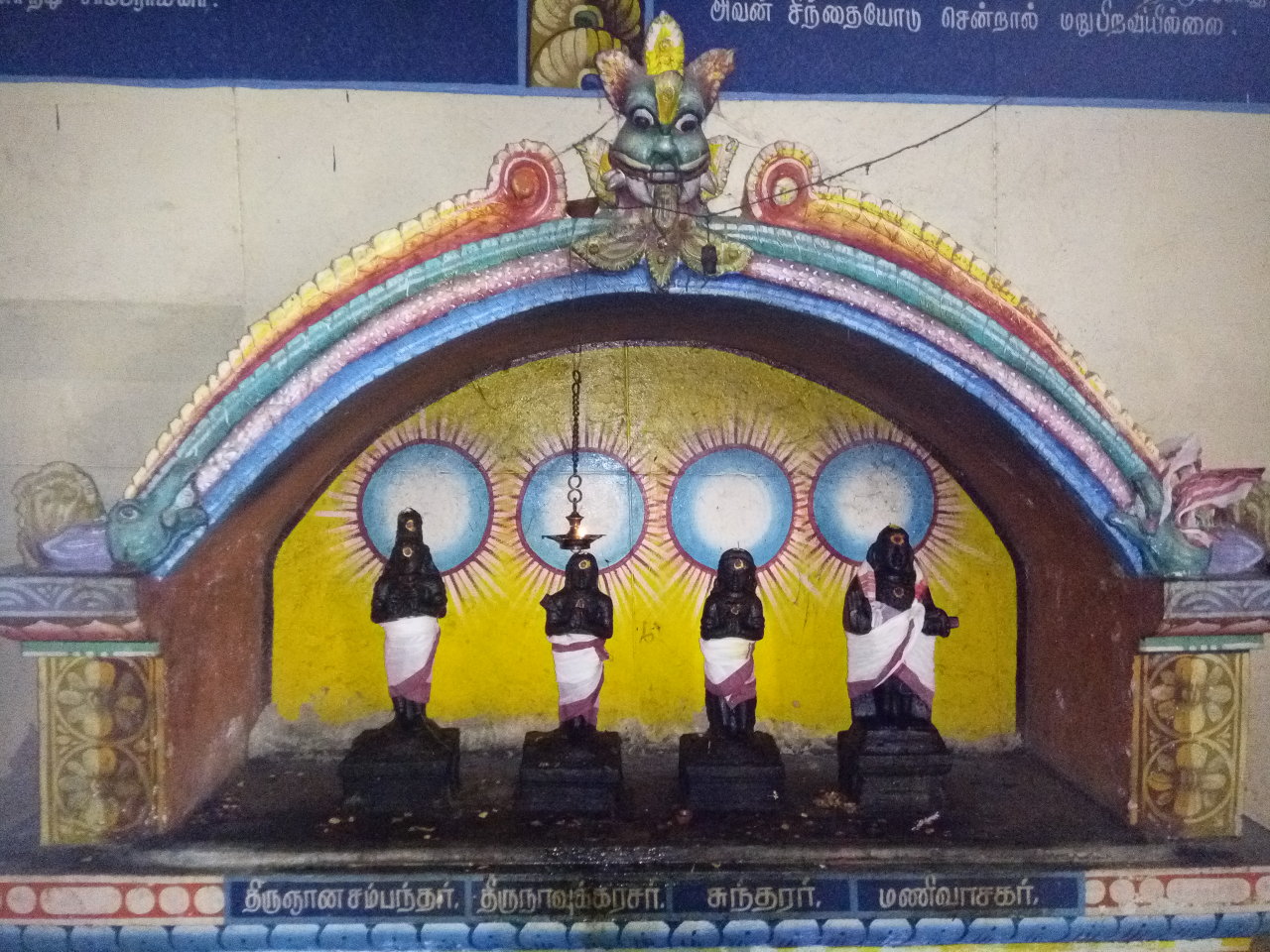 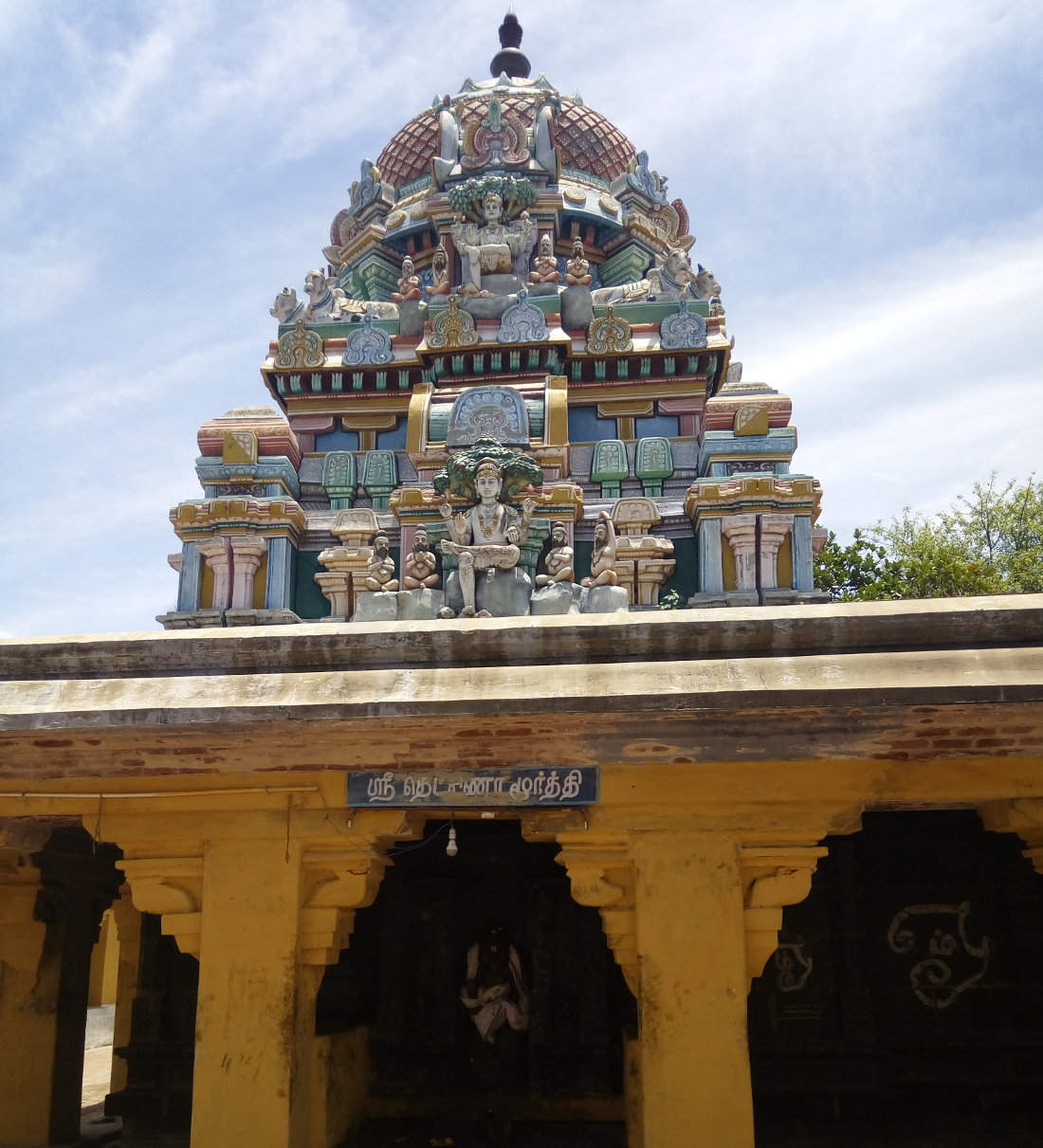 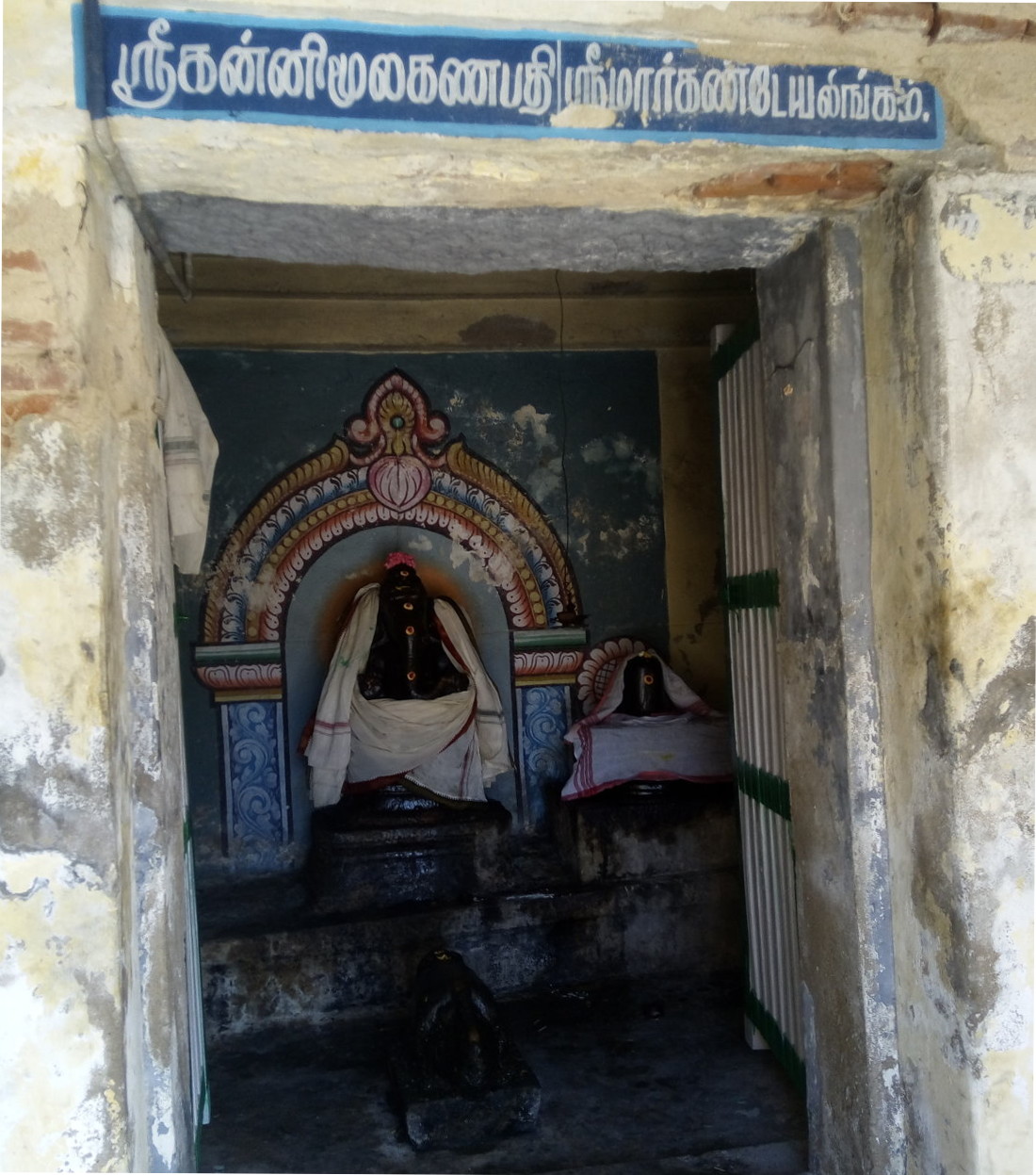 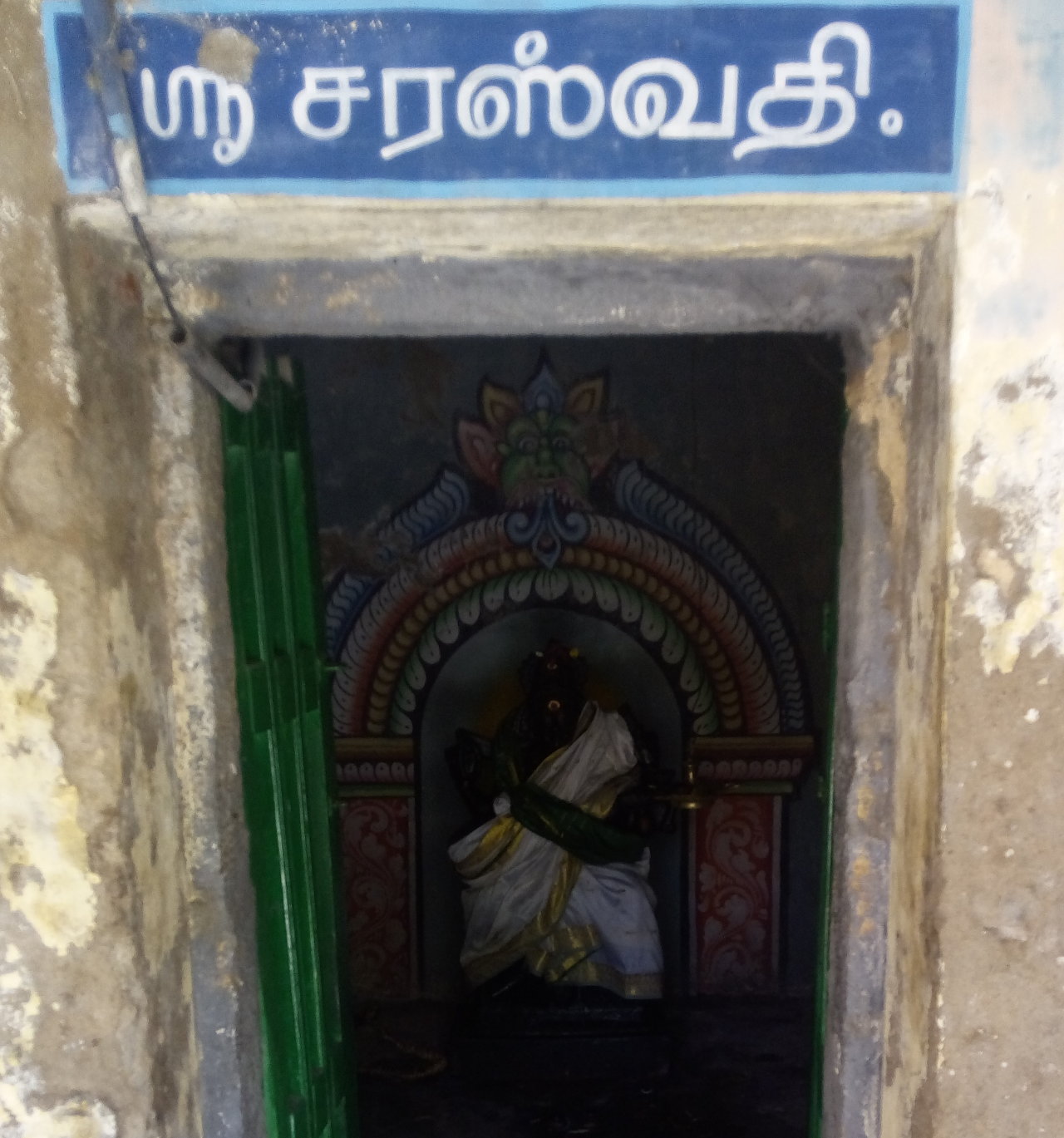 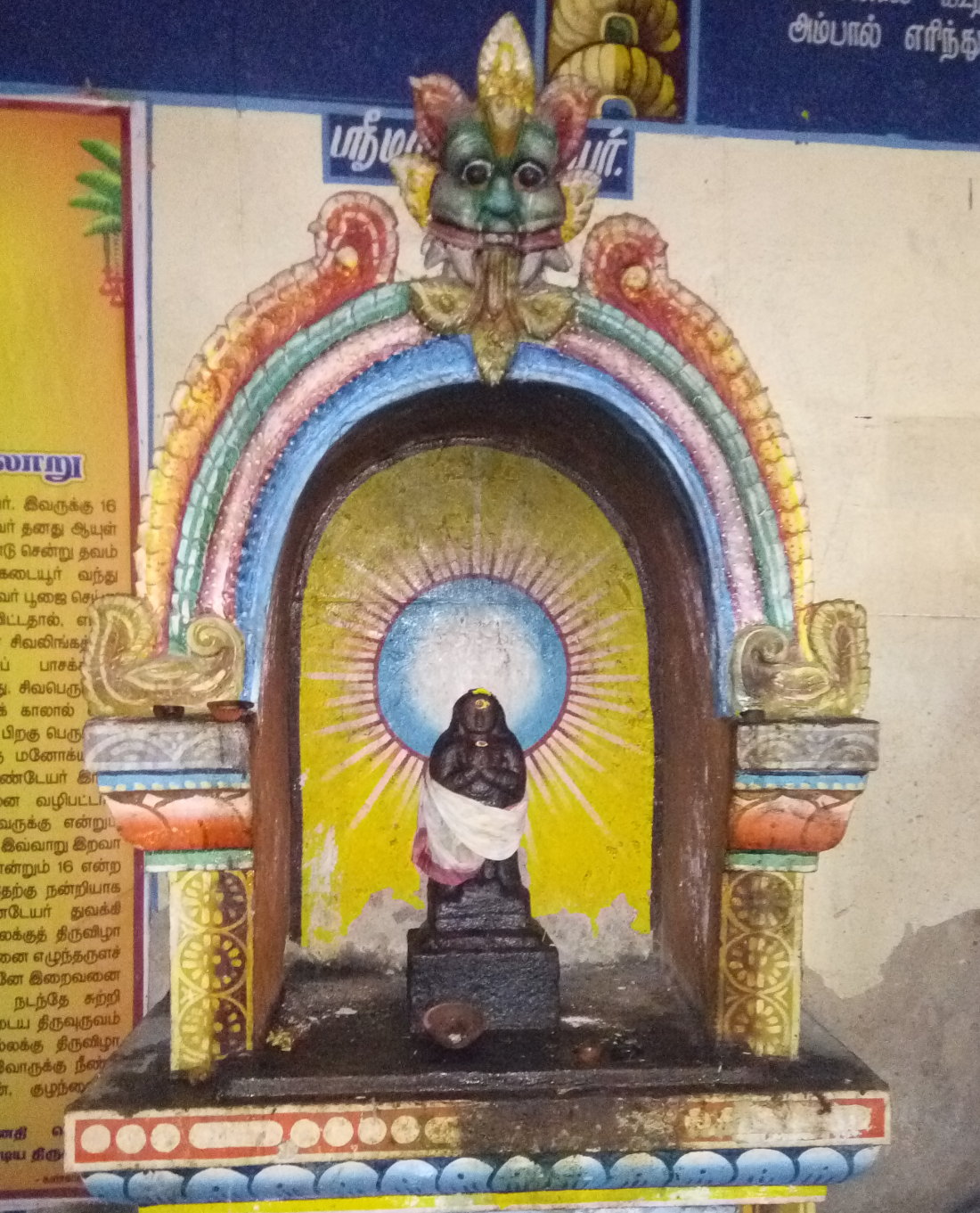 A beautiful painting depicting Goddess Parvathy performing oil abishekam to the lord can be seen in the corridor. 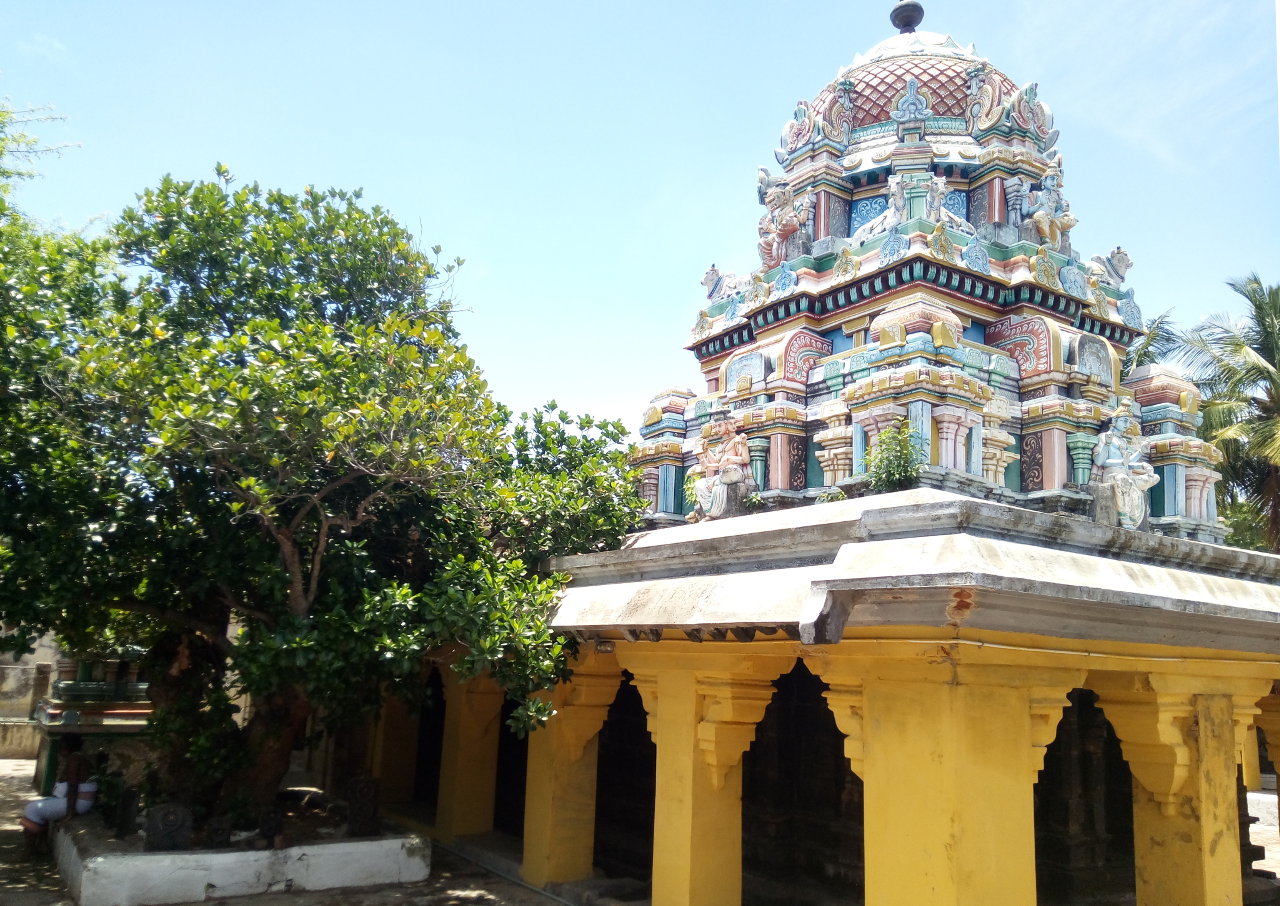 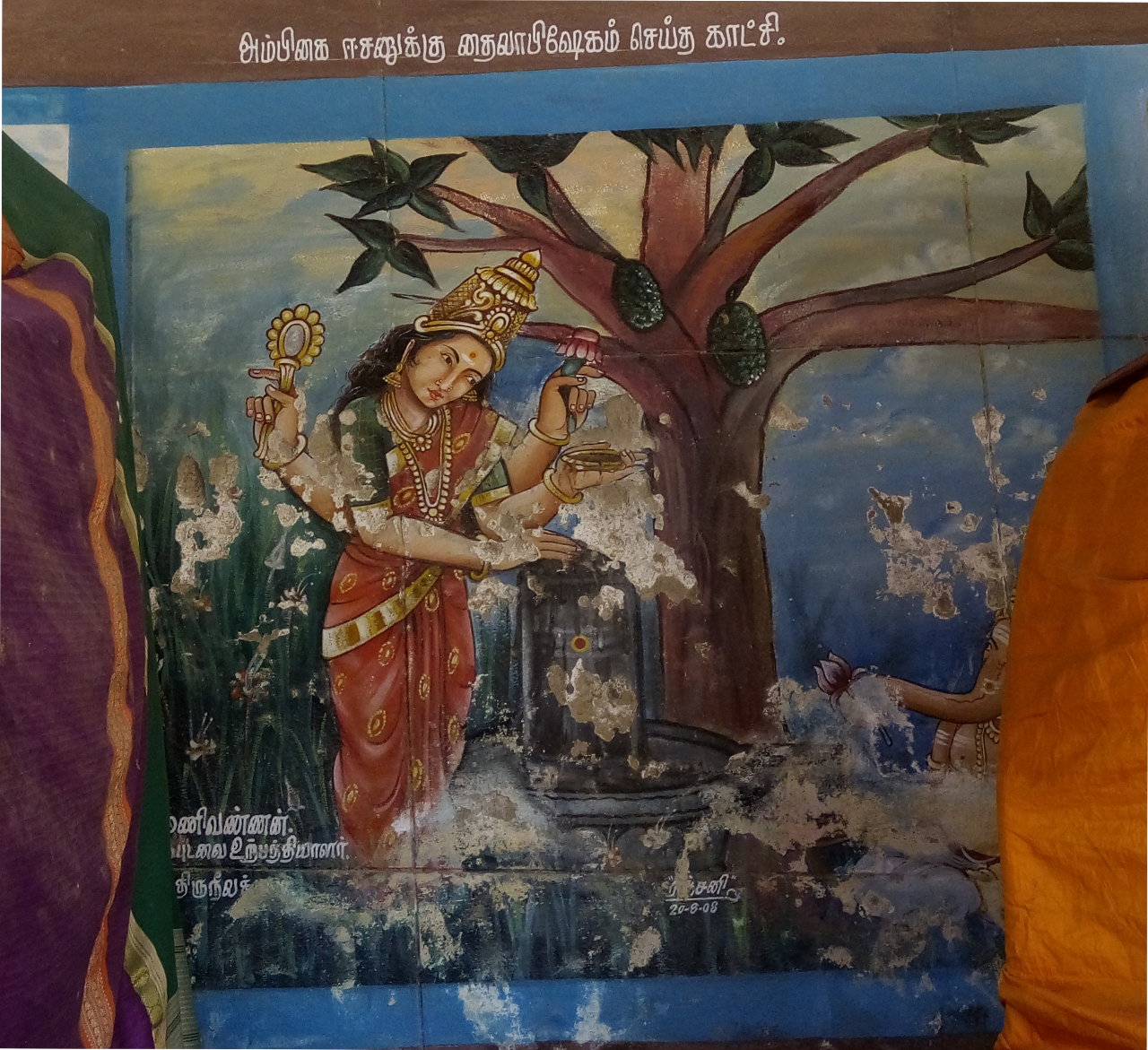 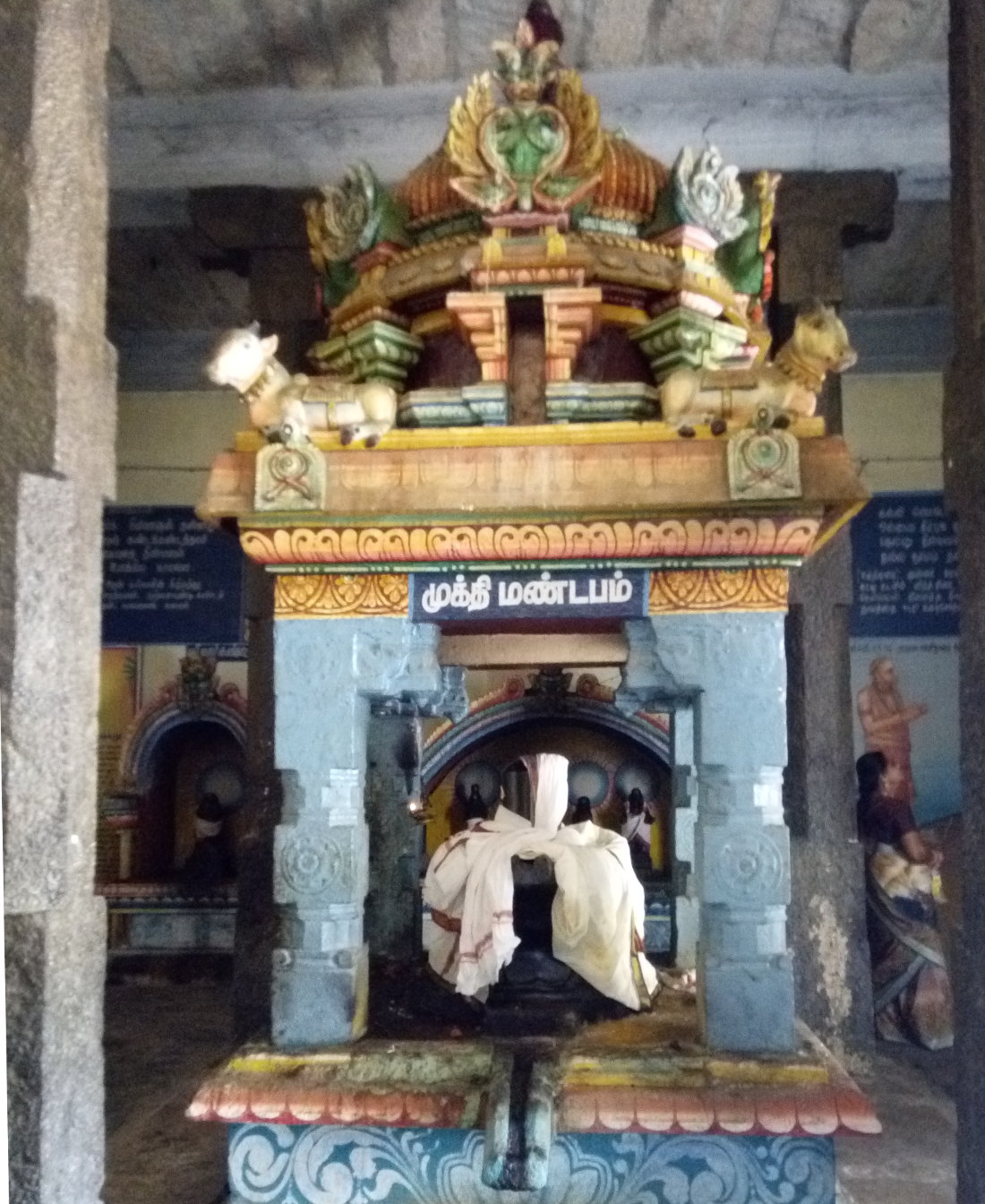 In his hymn of this temple at 4th stanza., Saint Thirunavukarsar mentioned about the lord’s consumption of poison.

Every month on Chithirai star day, oil abhishekam is performed to the lord.

In the main hall, Sri Brahmalingam is housed in a shrine which is called the “Mukthi Mandapam”.

A stone mortar and pestle set can be seen here. Earlier it was used to grind gingelly seeds.

As Lord Shiva is believed to have given Sage Markandeya the blessing of immortality here, devotees believe that by worshiping the lord here they would be relieved of “Yama Bhayam” (fear of death).

Devotees also believe that by worshiping the lord here, they would be blessed with longevity.

Devotees offer pots and bowls of oil regularly to the lord and it is believed that by consuming a small quantity of the offered oil, their prolonged ailments will be cured.

18-day Brahmotsavam in the Tamil month of Chithirai (April–May);

Aadipooram in the Tamil month of Aadi (July-August);

Thiru Karthikai in the Tamil month of Karthikai (November-December);

Thiruvadhirai in the Tamil month of Margazhi (December-January); and 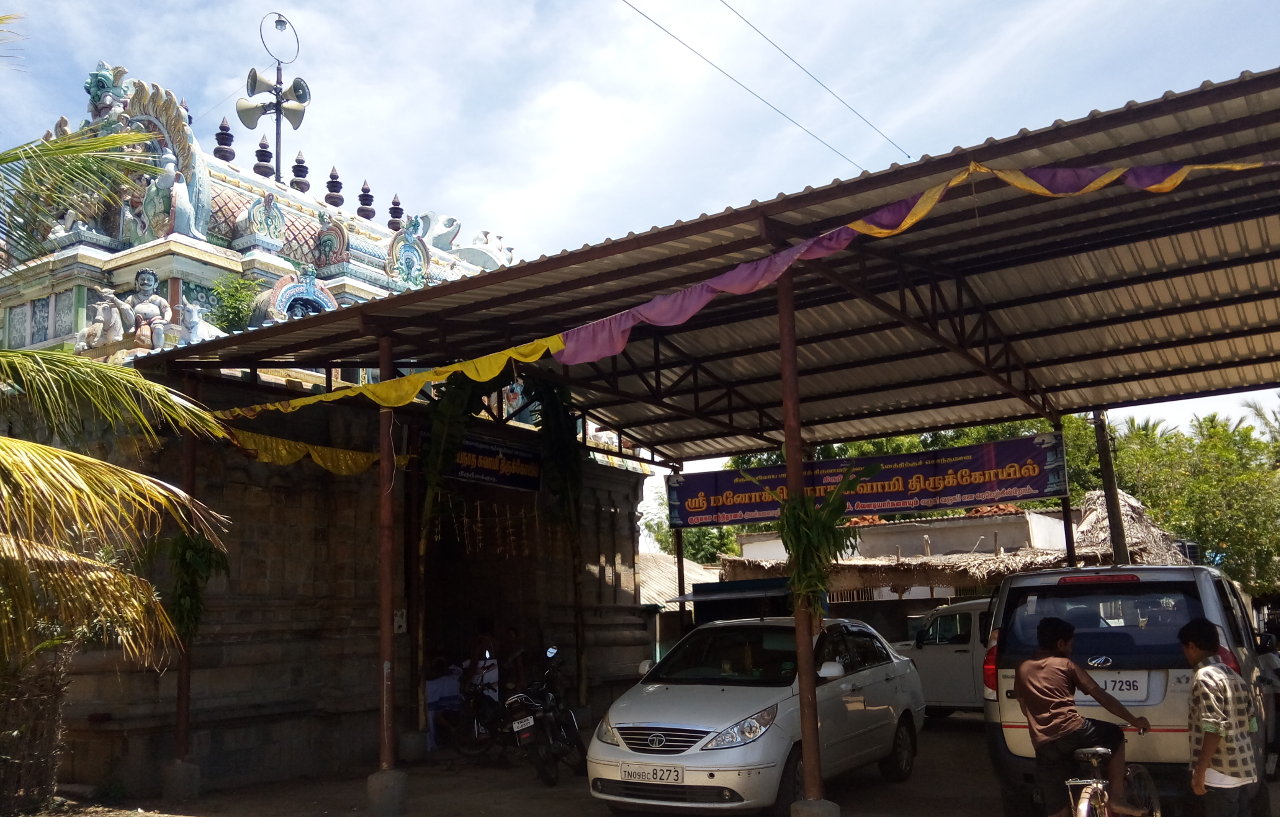 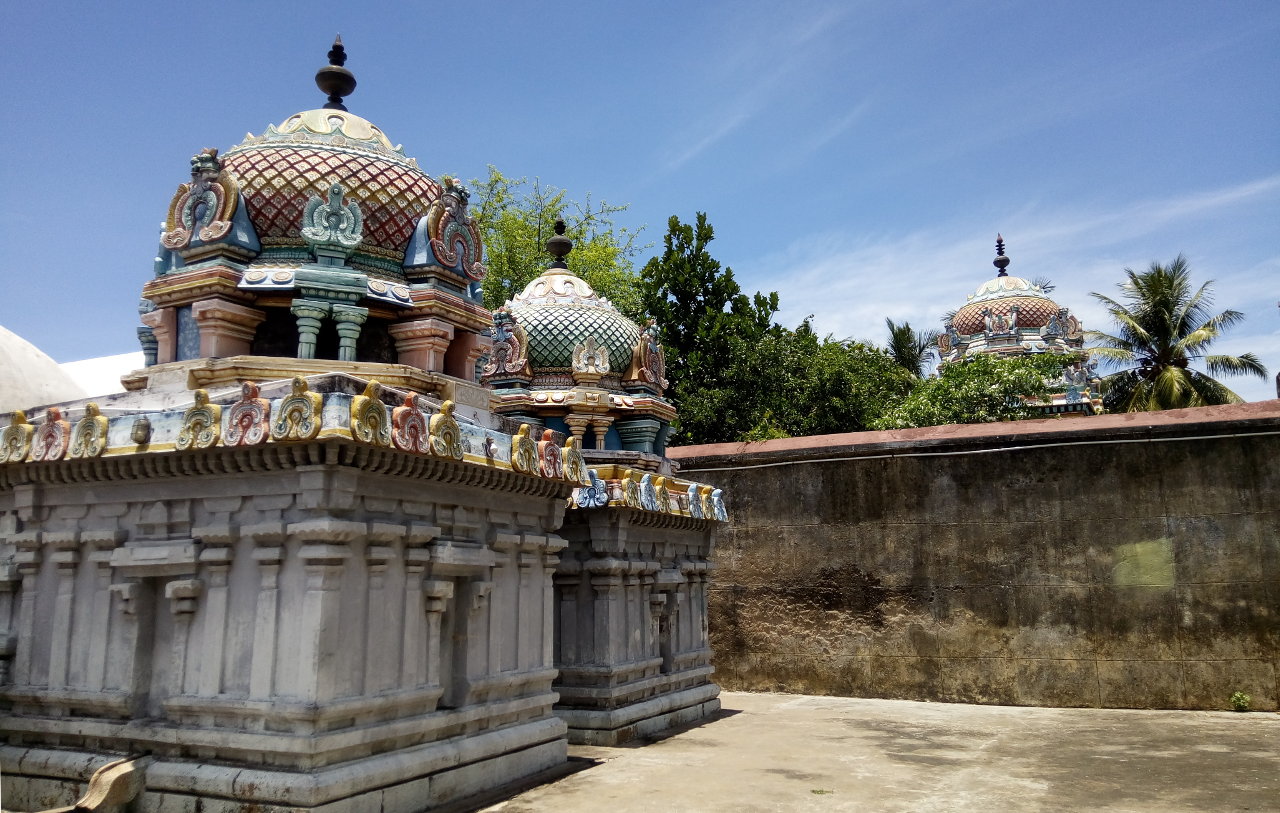 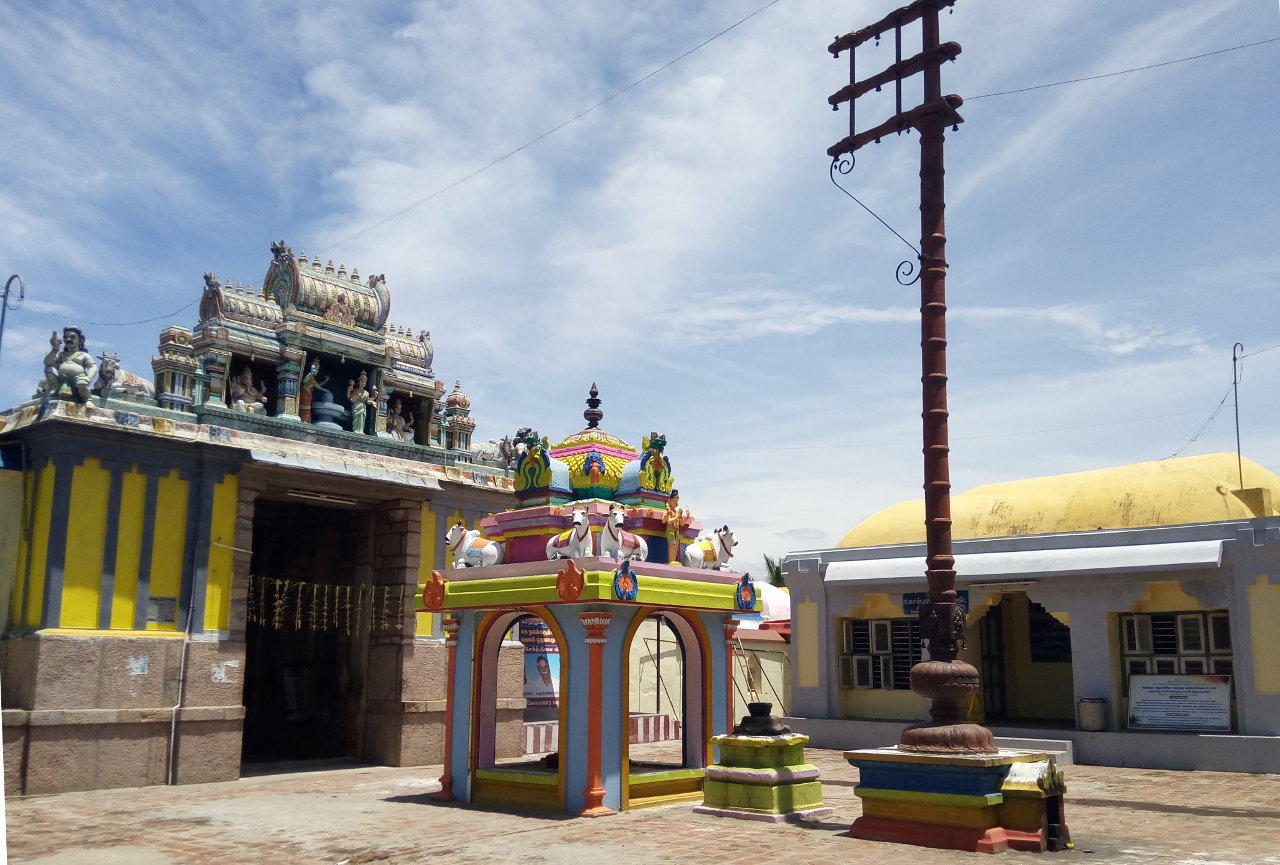