Kottaiyur is situated at a distance of about 4 kms from Kumbakonam on the Kumbakonam to Swamimalai route.

There are five stone inscriptions in this temple which date back to the periods of Chola kings Rarathirajan and Kulothungan-III. This temple is believed to have been built by Chola and Pallava kings.

This is one of the Saptastanam temples associated with Sri Adhi Kumbeswarar temple, Kumbakonam. Other temples are Kalayanallur, Thiru Valanchuzhi, Darasuram, Swamimalai, Kumbakonam and Melaikkaveri. 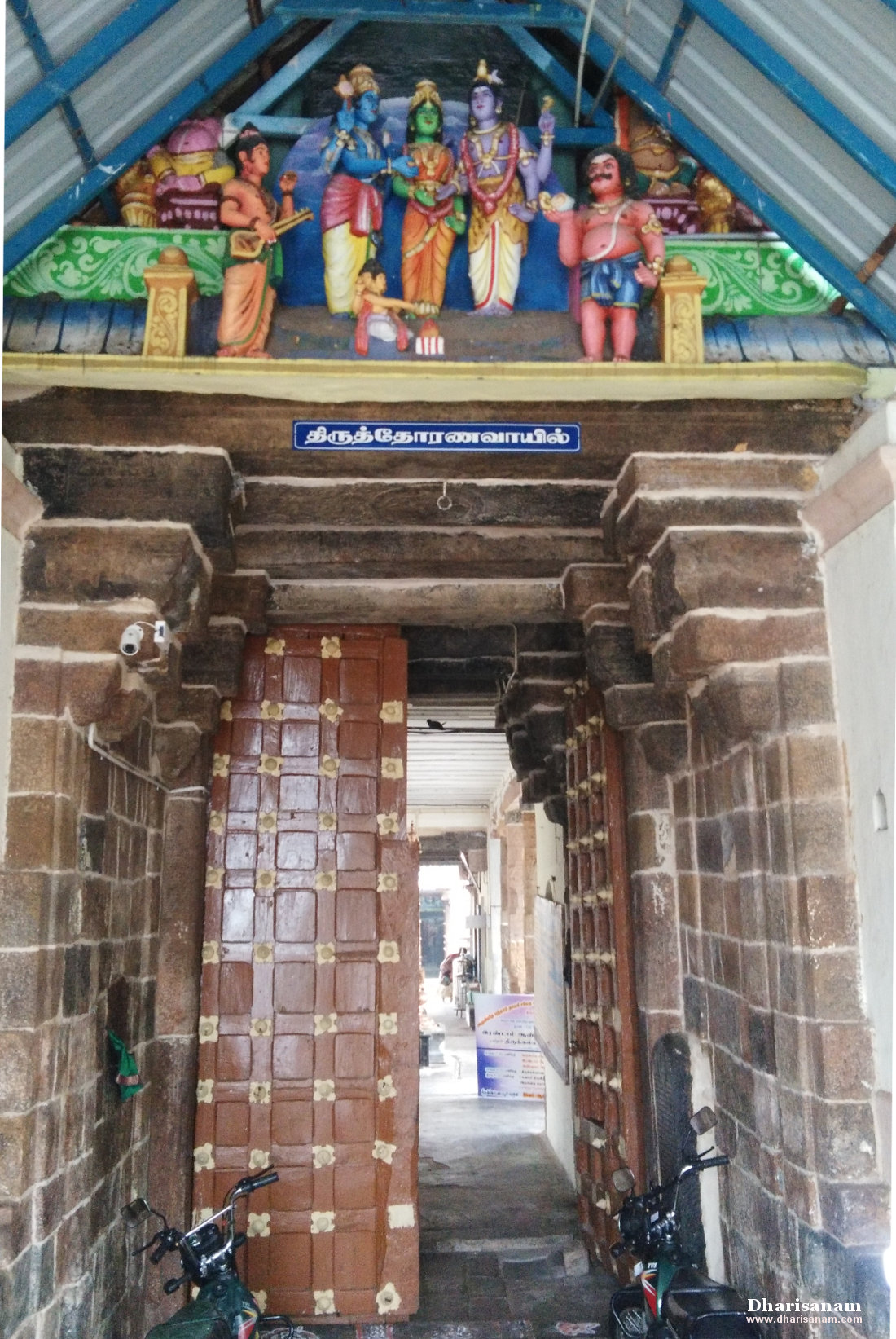 It is believed that when Lord Shiva opened the pot with his arrow, the pot broke and the decorative items on it fell in various places across the earth. Each of these pieces became Shivalingams. In Kottaiyur Sri Koteeswarar temple, it is believed that some drops of the nectar fell in a well. This well is known as “Amutha well”.

Another legend is that Lord Shiva (in the form of a Shivalingam) appeared here in the midst of castor plants. The fruits of castor plant are called “kottai” in Tamil and because of this, the place gets the name Kottaiyur.

The main Shivalingam in this temple looks as it is formed out of the fruits of a caster plant. In other words, its texture resembles a jack fruit. Hence the lord here is praised as “Sri Koteeswarar”. Another important feature of this lingam is that water droplets can be seen coming out of its top. This symbolises the legend that the Ganges resides in Lord Shiva’s head.

Another legend associated with this place is that of Heranda (Athreyar) Maharishi. Herandam” means Castor plant. The sage gets his name because he had performed penance under the castor plants in this place. There is a separate shrine for Heranda Maharishi in the front hall where he is seen in a meditative posture. The legend is that once in Thiruvalanchuzhi, Aadhiseshan came out from the “Padhala logam” (underworld) on a Shivarathri day to worship Lord Shiva. A huge hole (“phila dwaram”) formed at the place where Aadhisheshan came out. Since river Cauvery was flowing through this place, she entered this hole and fell into the underworld. The Chola king who ruled from Kumbakonam, Harithuvajan got worried about this and prayed to Lord Shiva. It is believed that at this point the lord’s divine voice was heard saying that a king or a sage has to sacrifice his life by entering into the hole so that the river can come back to earth.

The king also sought the advice of Sage Heranda Maharishi who was performing penance in this place. The sage confirmed the divine voice. When the king decided to get into the hole for the welfare of the people, the sage stopped him and he himself entered into the hole and brought Cauvery back to earth. The place where the river came back to earth is called “Mela Cauvery”, near Kumbakonam. Although he entered into the underworld at Thiruvalanchuzhi, it is believed that he came back to the earth in Thiruvalampuram. He worshiped the lord there for some time and attained salvation.

It is believed that Sage Pathrayogi, in order to regain his spiritual power, visited many Shiva temples. When he reached this temple, Lord Shiva was pleased with his devotion and blessed him by appearing in the form of one crore (“kodi” in Tamil) images of himself, along with one crore images each of Vinayakar, Goddess Parvathy, Murugan and Chandikeswarar. This was done as a way to bless him with the benefit of visiting one crore Shiva temples. Hence the lord here is praised as Sri Koteeswarar and the place gets the name Koteecharam. It is believed that any good deed (Punniyam) or bad deed (Pavam) done here will be multiplied one crore times.

Surusi, a prince from Thirihartha kingdom (a kingdom in the north), son of king Sathyathi, was cursed by Sage Pathrayogi to become a devil. This was because he had disrespected the sage and disturbed his penance in the Himalayas. As advised by Sage Vyasa, the king brought his son to this place to worship Lord Shiva.  The prince took a dip in the temple’s Theerthams and worshiped the lord. It is believed that he was absolved of his sins. It is believed that the king stayed here for some time, renovated this temple and made some endowments for the temple’s maintenance.

It is believed that Lord Ram, Brahma, Indra, Sage Naradar and Sage Markandeya have worshiped the lord here.

In the “koshtam” (place surrounding the sanctum sanctorum), idols of Narthana Vinayakar, Dakshinamurthy, lingothbavar, Brahma, Durgai and Chandikeswarar can be seen. 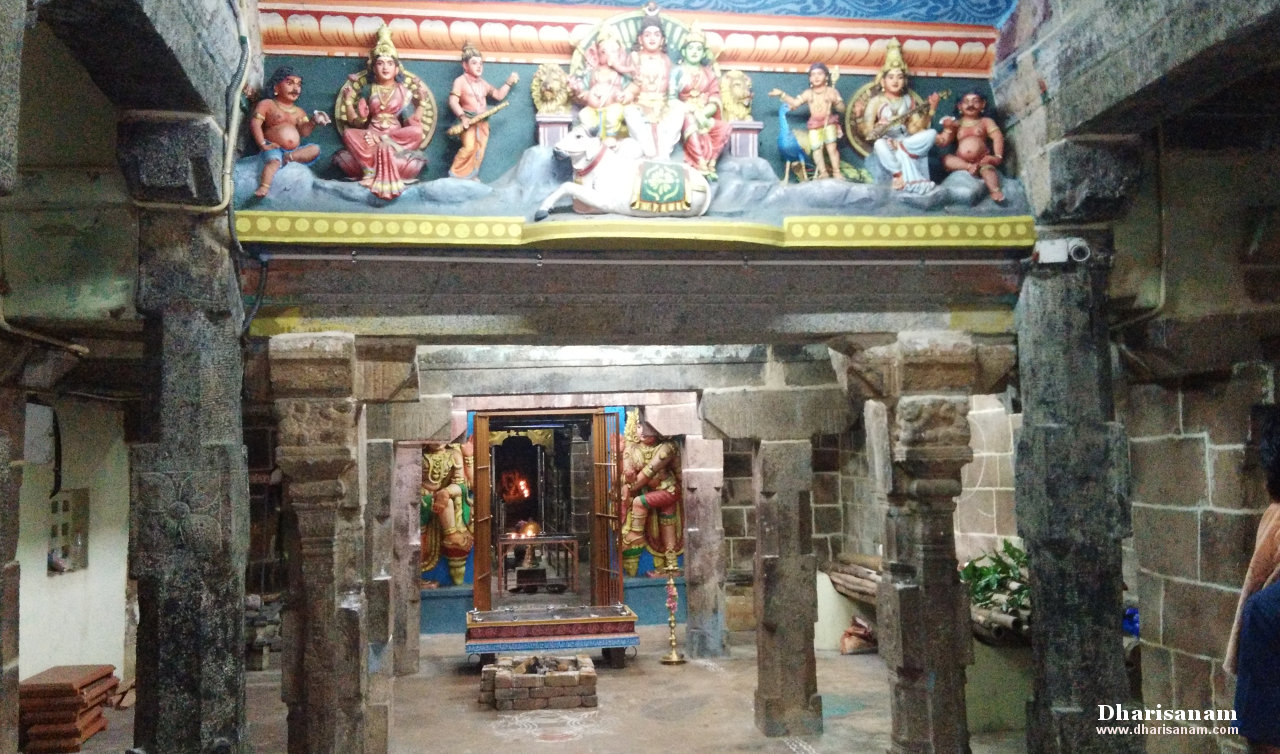 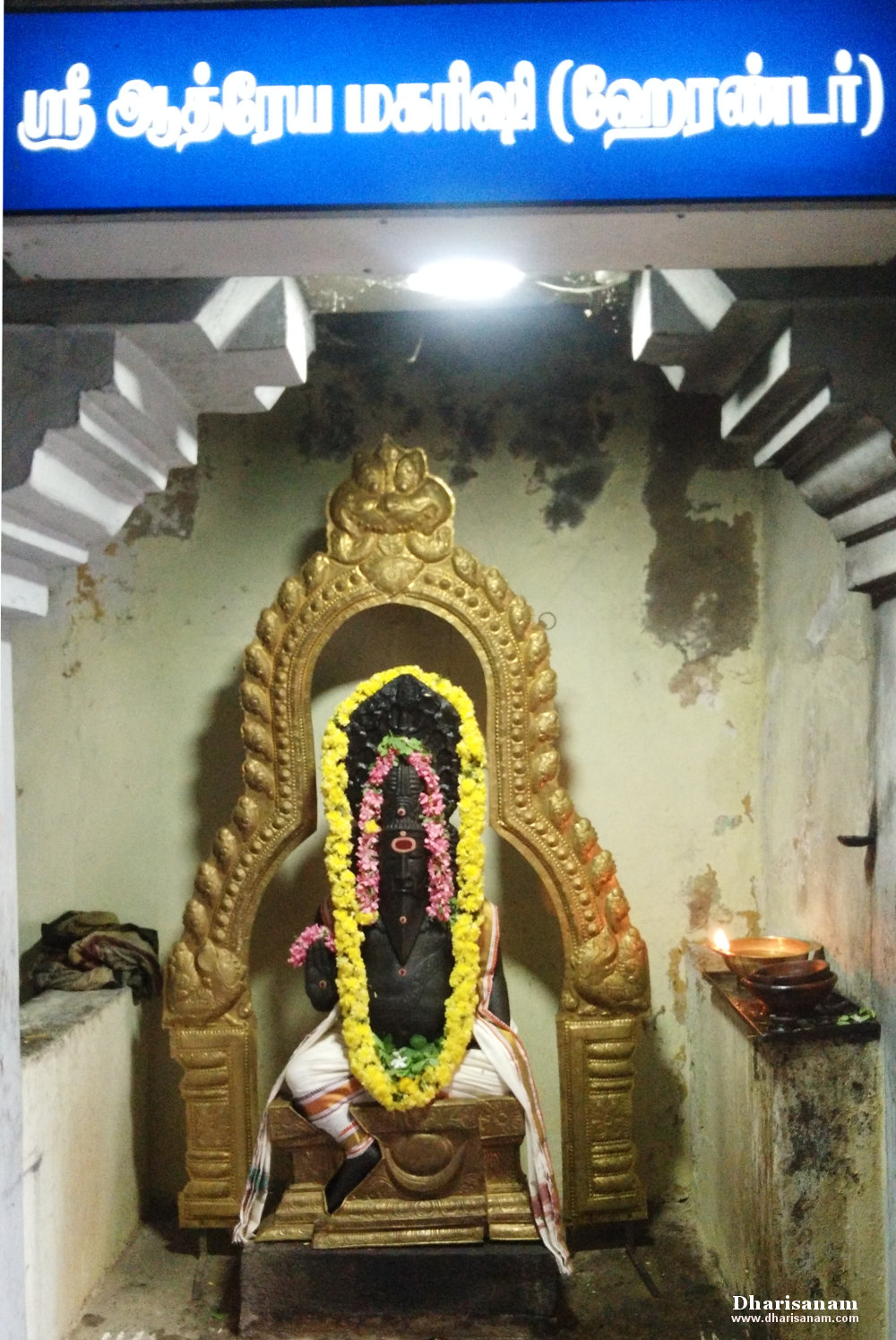 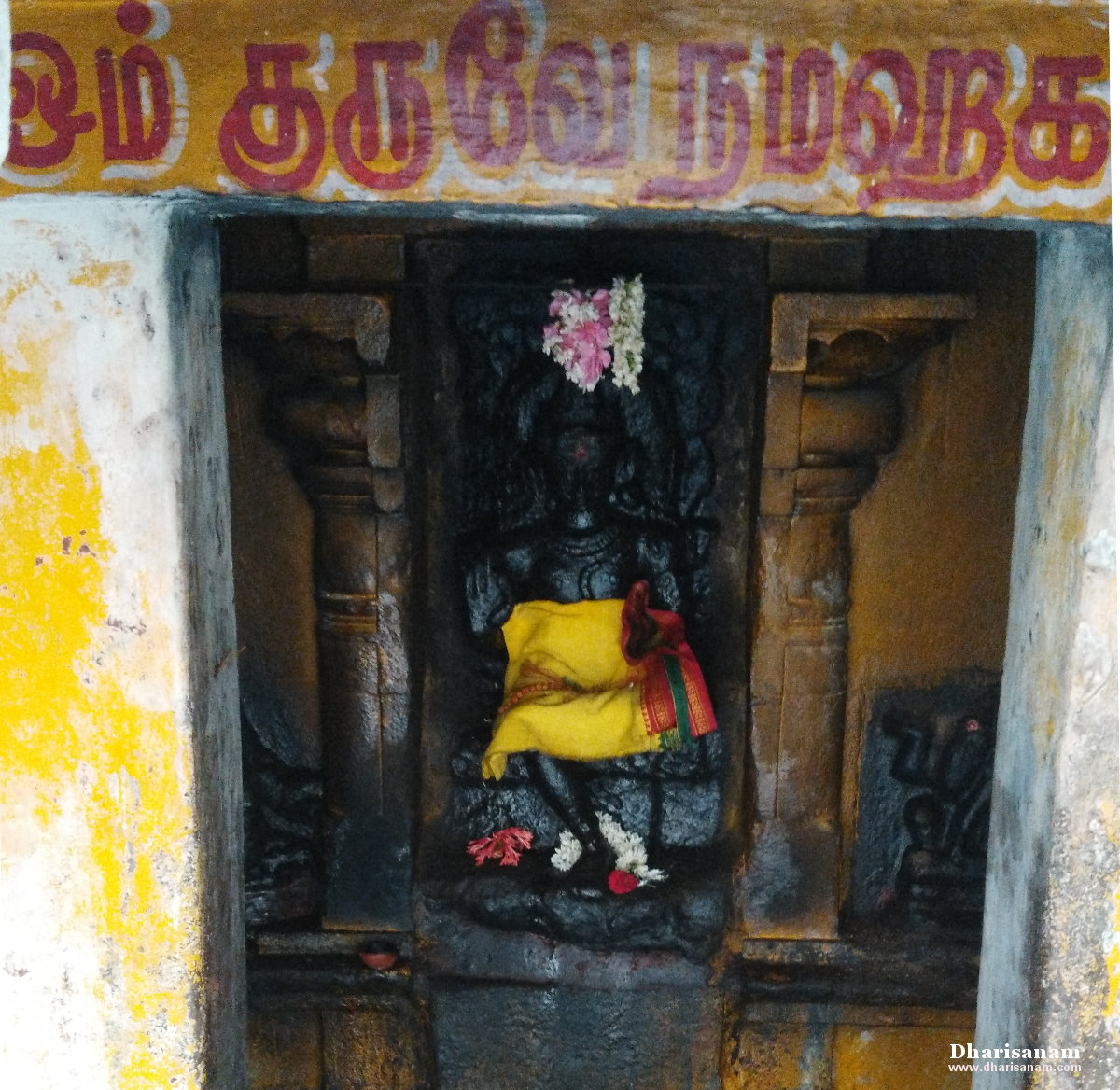 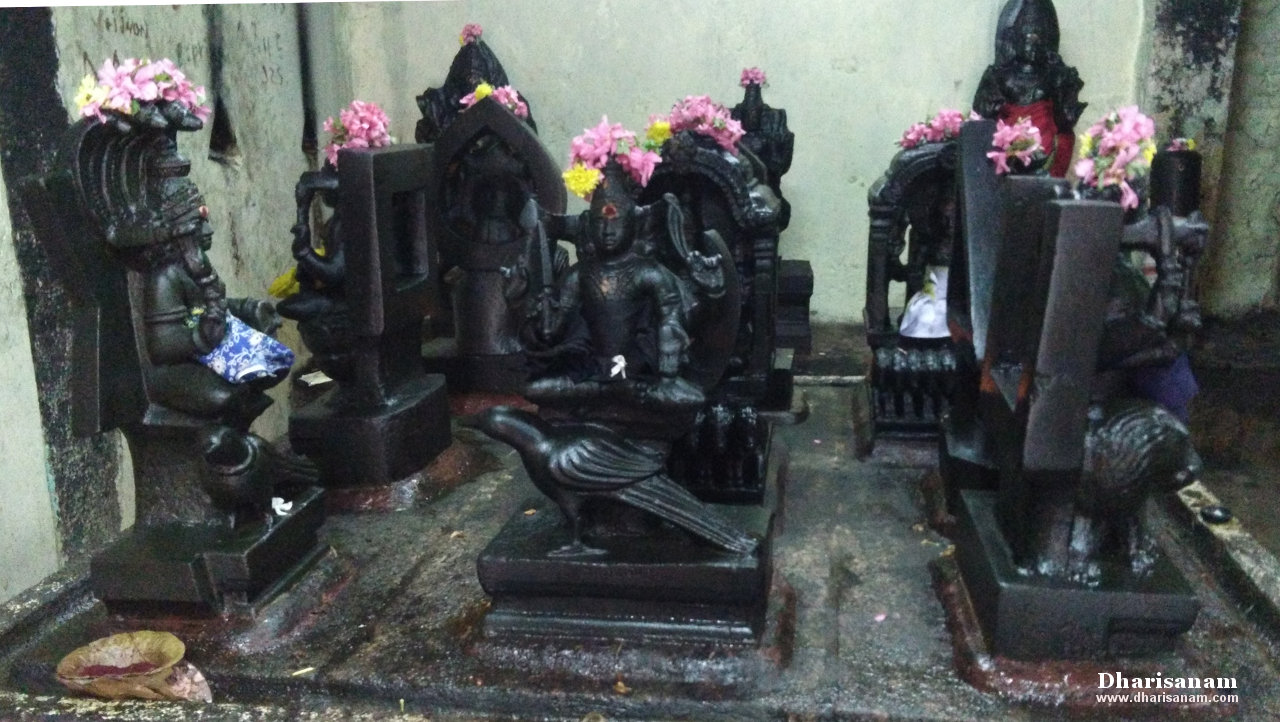 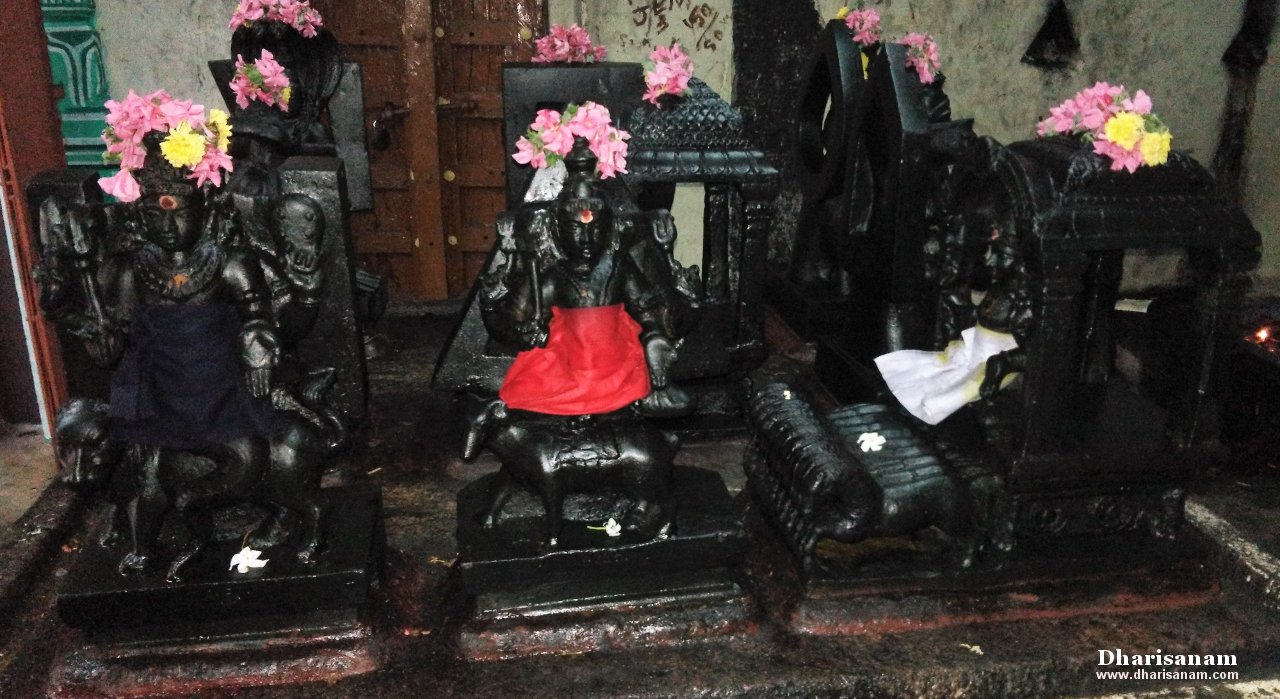 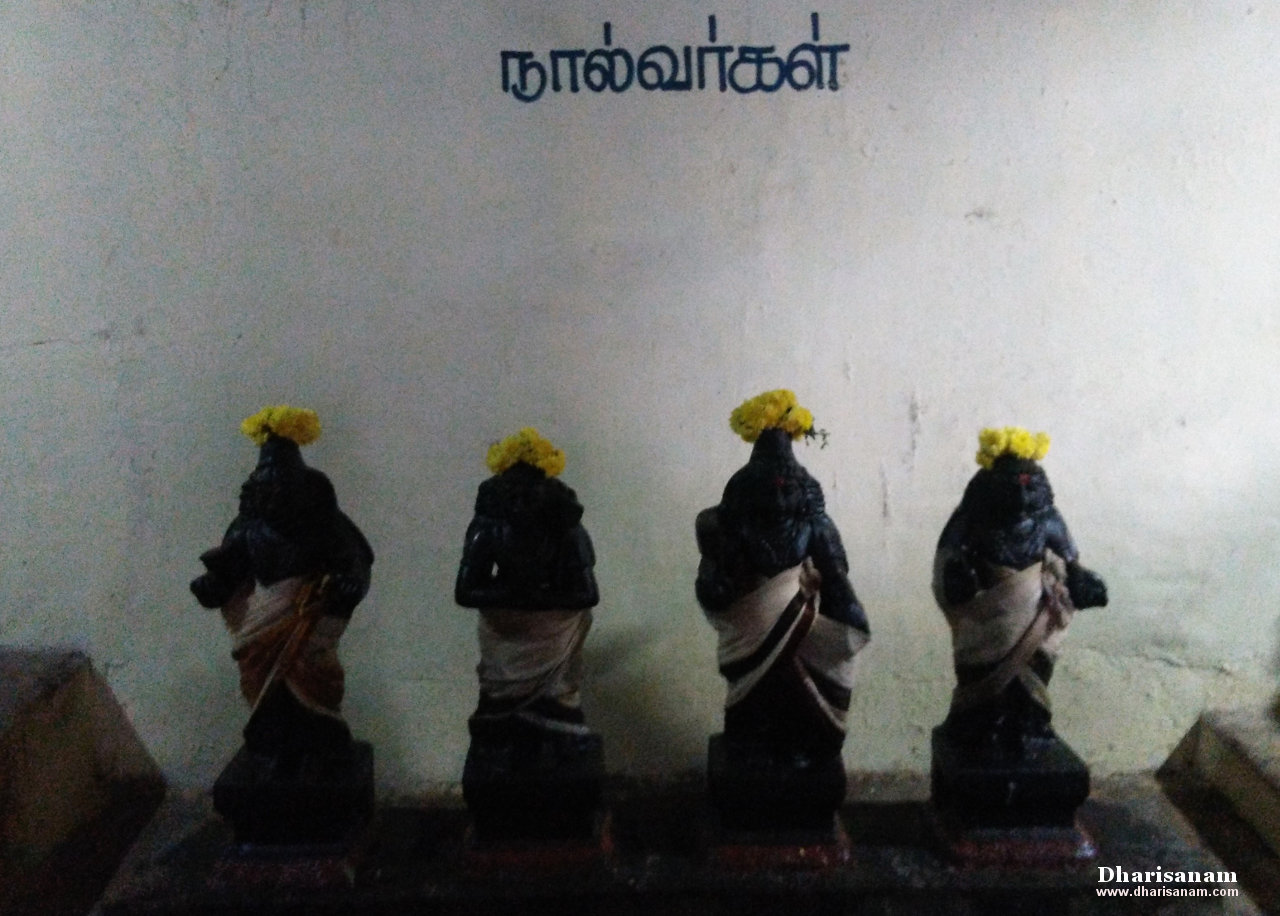 There is no relief for the sins that are committed here. A proverb related to this place goes like this – “Kottaiyuril seitha pavam kattaiyode” meaning “those who commit a sin here will have to live with its repercussions for the rest of their life”.

Lord Murugan is praised as Kodi Subramaniyar and can be seen with his consorts in the inner corridor. Lord Murugan (in the name of Dhandayuthapani) can be seen at the entrance of the temple. 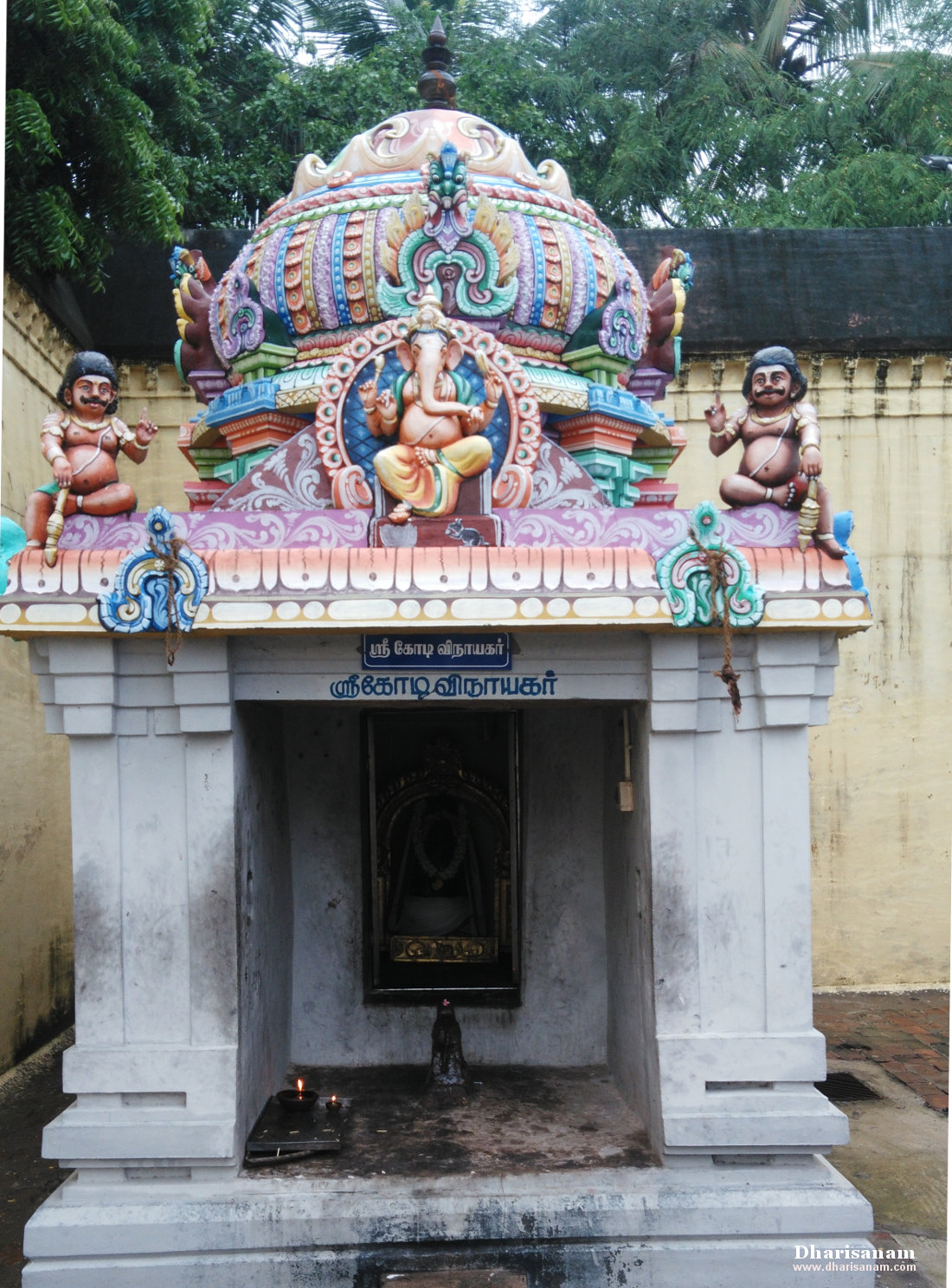 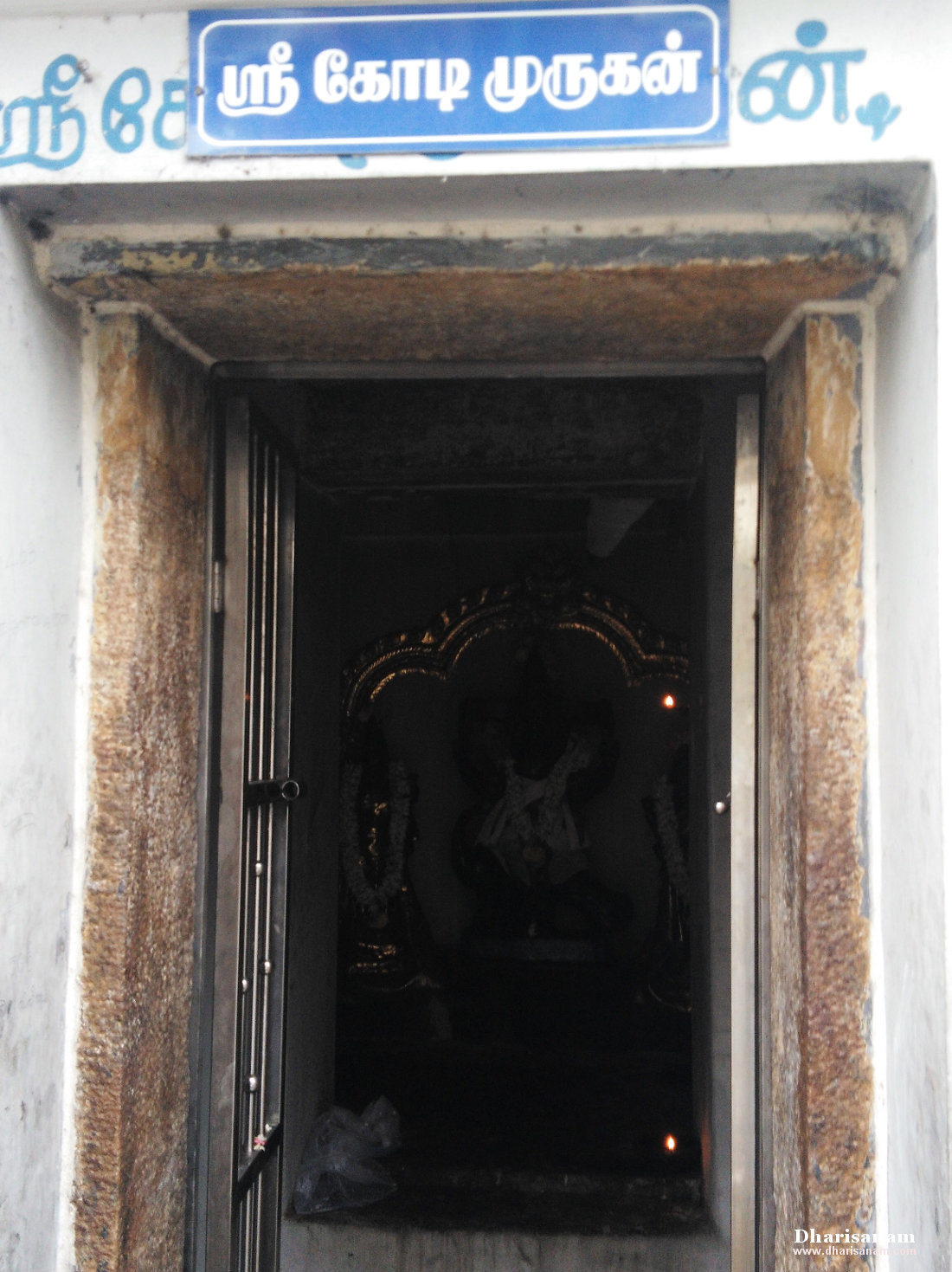 Goddess Parvathi’s shrine (Panthadu Nayaki) is facing the south. She is depicted in a playful posture. Devotees worship the Goddess here because they believe that the goddess will toss away all their sins and will bless them with a righteous life.

The idols in the Navagraham here are big in size, very beautiful and unique. All the lords are depicted along with their respective mounts. Suryan and Chandran are seen on chariots pulled by horses.

Goddess Durgai is depicted with eight hands (Ashtapuja Durgai) and her right leg a step forward. 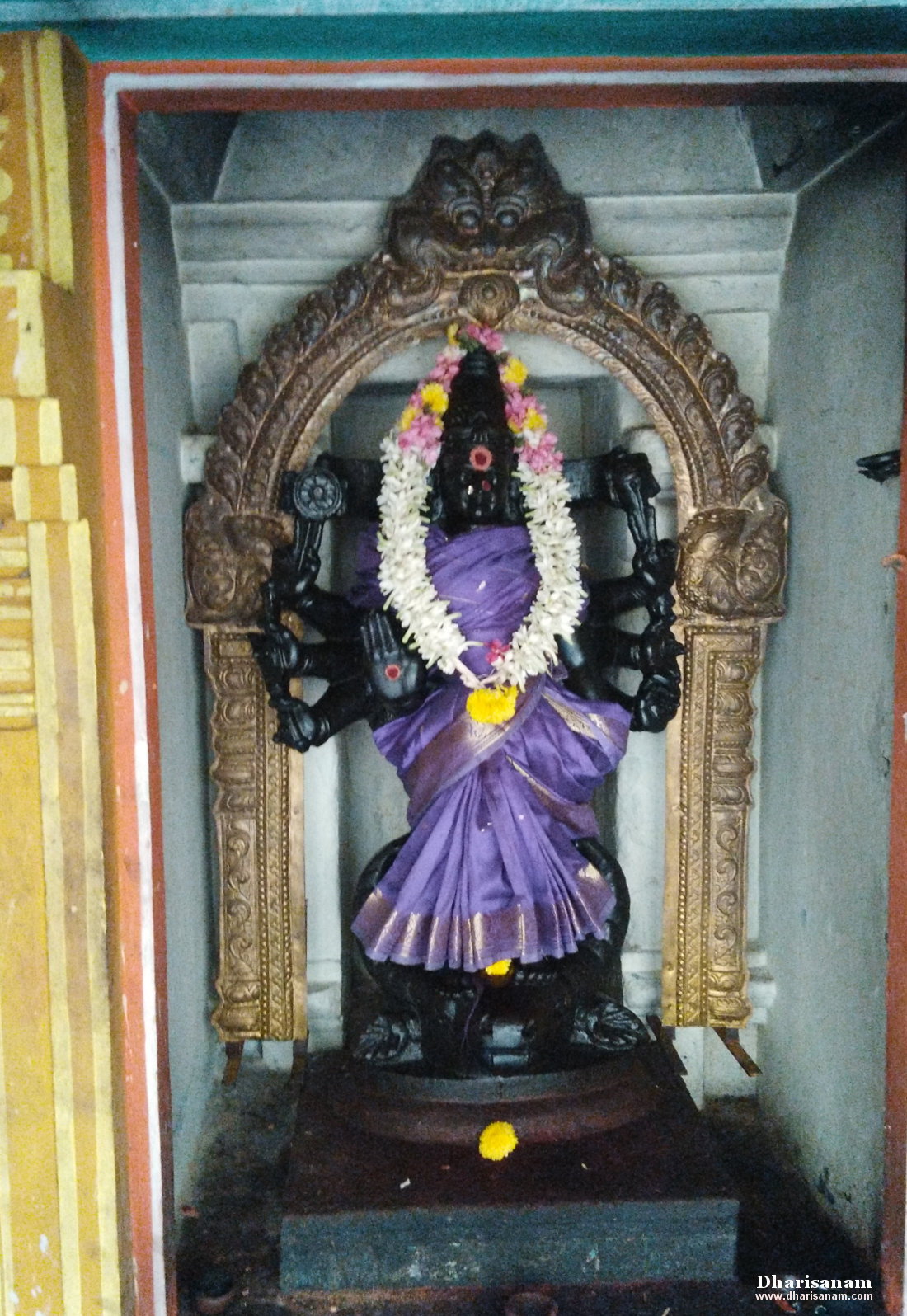 This temple’s holy water (Kodi theertham) is believed to have been created by Sage Heranda for the purpose of the lord’s abhishekam. This well never dries up. Devotees believe that sprinkling water from this well on their body will purify their mind and cure many diseases.

Goddess Parvathy’s shrine has a separate corridor. This corridor has many beautiful carvings engraved on its walls. Also, there are many beautiful sculptures in various places in this temple.

A beautiful relief depicting the story of Chola king Manu Neethi, who kept his son under his chariot’s wheels and ran over his body to give justice to a cow, can be seen in the second entrance of this temple.

It is believed that those who worship the lord here will get the benefit of worshiping the lord in one crore Shiva temples.

It is believed that any good deed (“Punniyam”) or bad deed (“Pavam”) done here will be multiplied one crore times.

Devotees sprinkle water from this temple’s Theertham on their head and worship the lord here to stay healthy and young. They believe that doing so will also keep away the evil spirits.

Shivrathri in the Tamil month of Masi (Feb-Mar), and 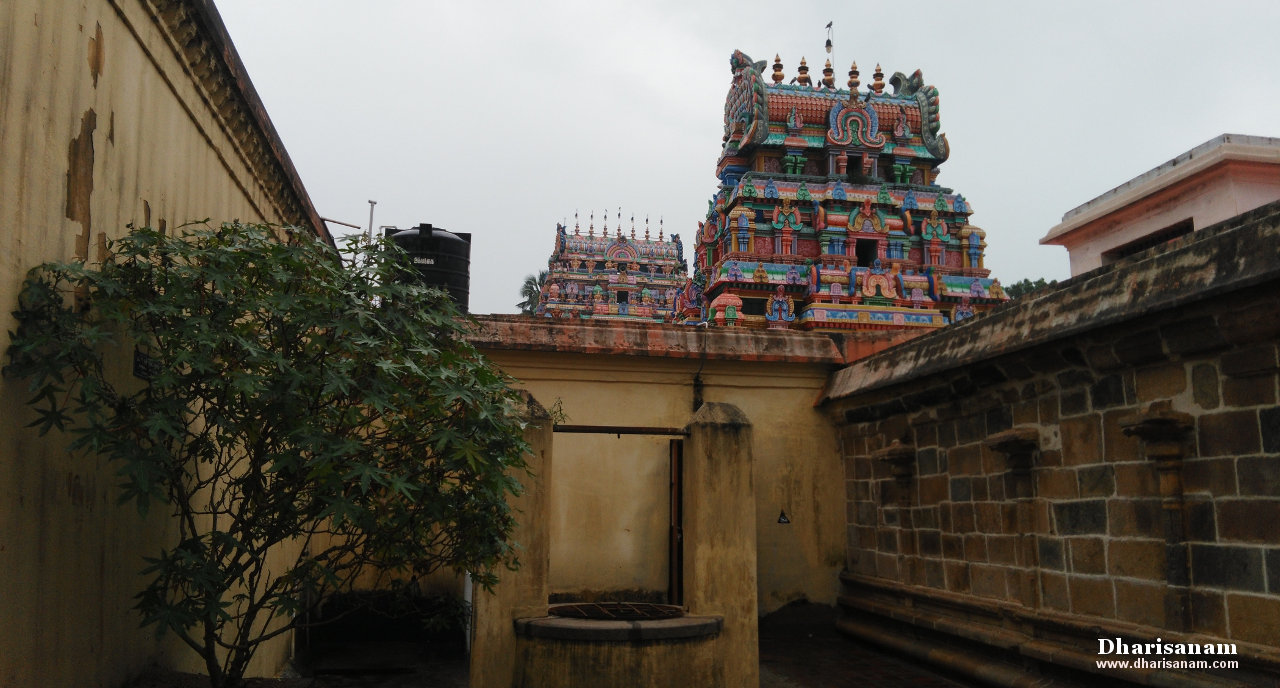 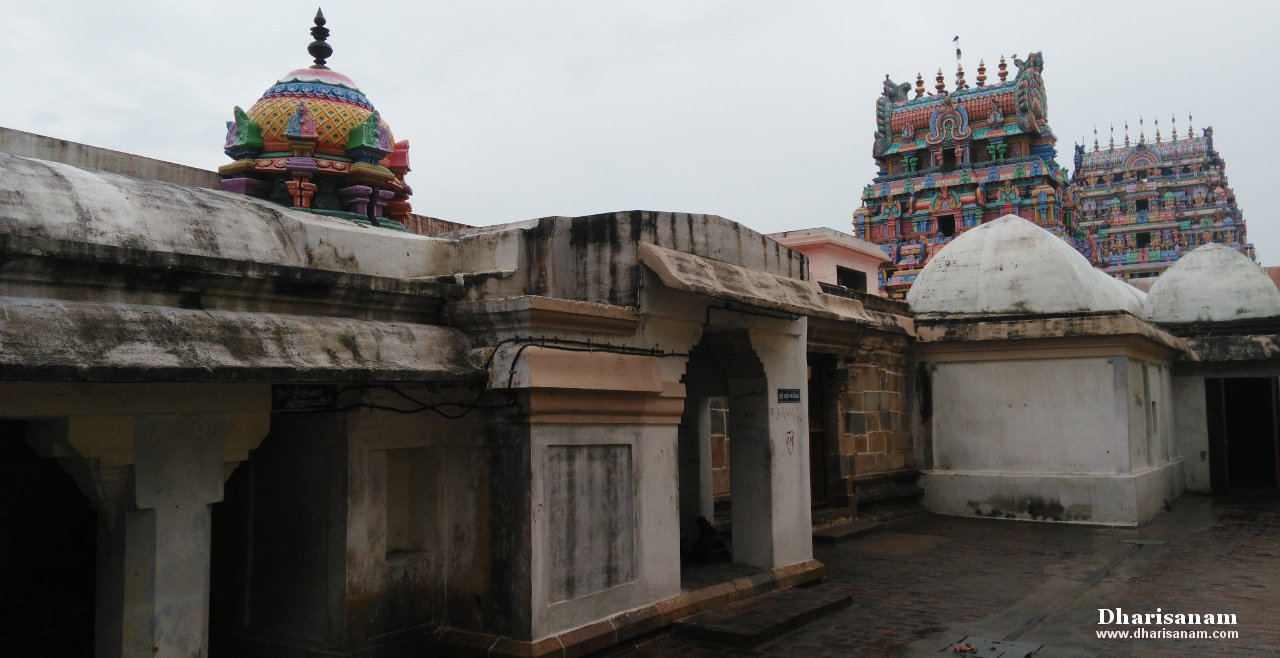