It is about 5 kms from Suryanarkoil (famous Navagraha Sthalam for Lord Suryan).

There about 50 stone inscriptions in this temple. According to the inscriptions, this ancient temple was built about 1,300 years ago. These inscriptions relate to various kingdoms – the early Pallavas and the later Pallavas, Pandiya King Maran Sadayan and Chola Kings Rajarajan-I, Kulothungan-I and Kulothungan-III.

In 970 AD, this temple was reconstructed using stones during the reign of King Uthama Chola by his mother, Queen Sembiyan Madevi (wife of Chola King Gandaradithyan).

The Sthala Viruksham of this temple is Perambu plants. In Sanskrit, it is called “Vedhra Viruksham”, hence the lord here is praised as “Sri Vedhravaneswarar” (“vanam” means forest and “Eswarar” means the lord in Tamil).

This is one of the five sthalams whose name ends with “Ka”. (“Ka” means “a beautiful garden” in Tamil). They are – Thiruvanikka, Thirukkodikka, Thirukkolakka, Thiru Nellikka and Thiru Kurakkukka.

It is believed that the temple was once surrounded by beautiful gardens. Hence this place gets the name “Kotikka” and the lord is praised as “Sri Koteeswarar”. 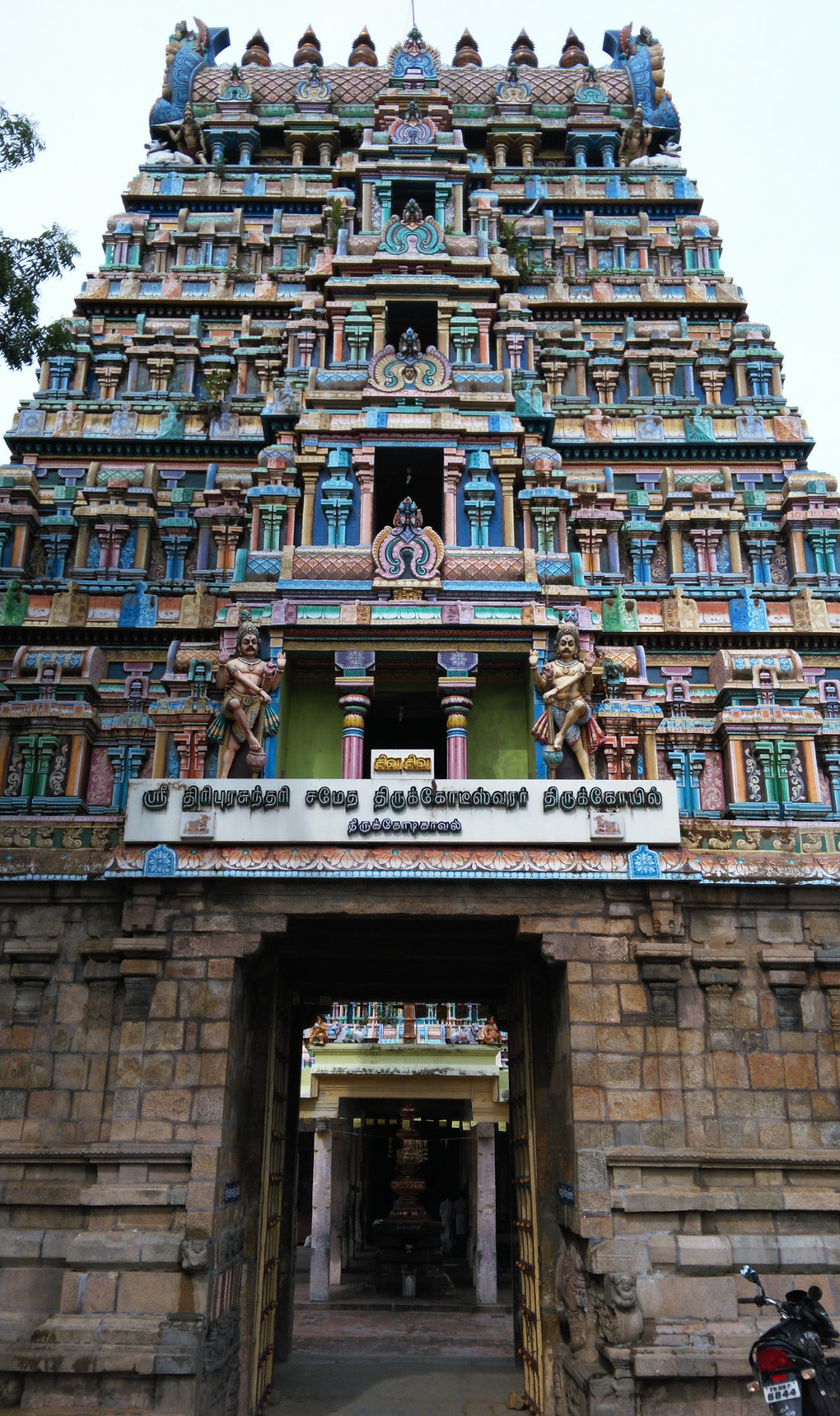 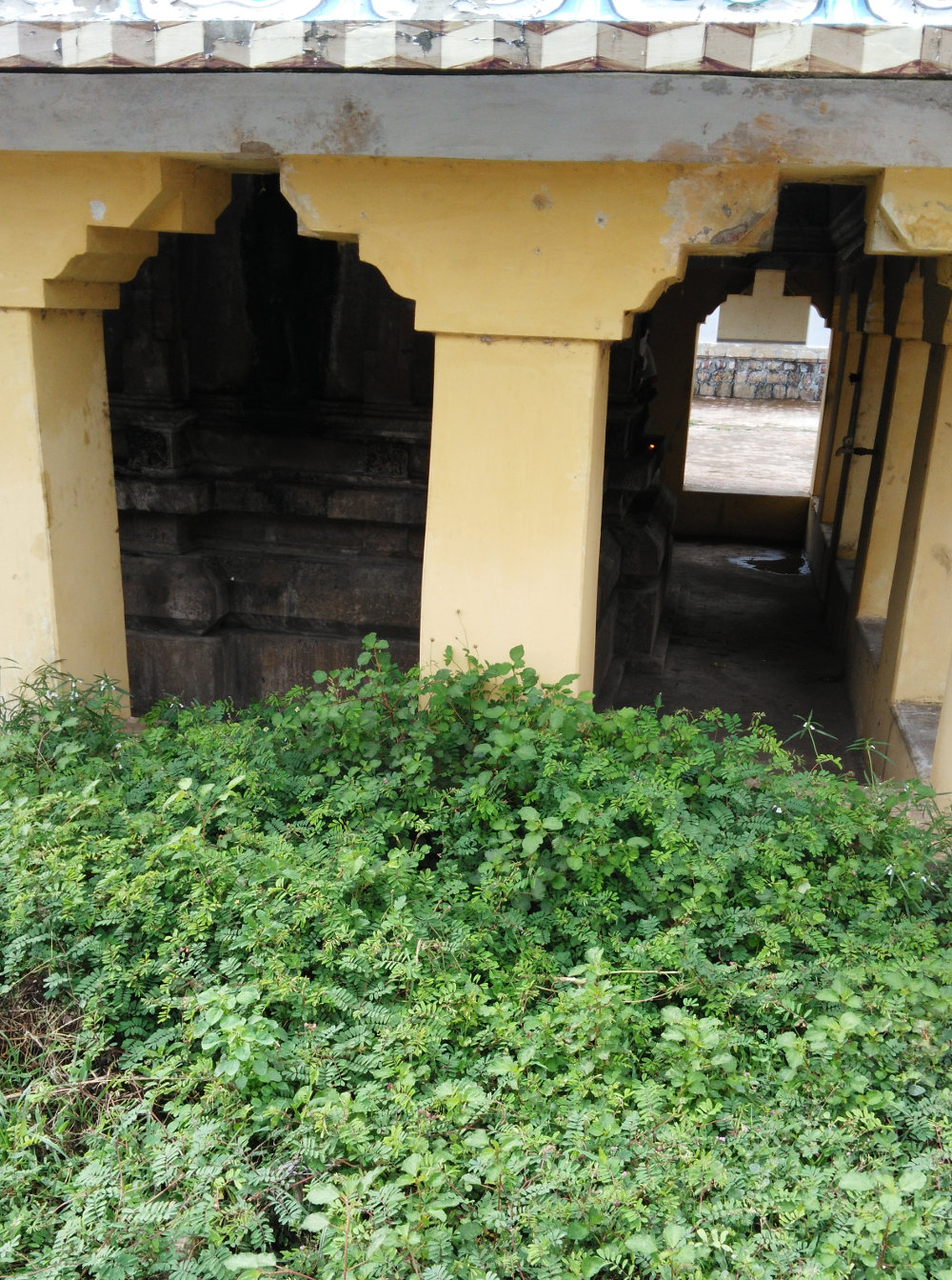 While granting his darshan to the Devas, Lord Thirukoteeswarar emphasised the sacredness of “Vedhravana Kshetram” (another name for Thirukkodikaval) and the Theerthams therein. The lord further said that “This, my kshetram here, is also known as “Bhaavagam”. It is situated on the banks of Cauvery theertham and it is very sacred. This kshetram is equal to my body. This tank, Sirungothbava Theertham, was created by Nandhi using his horns. Whoever takes a dip in it, is sure to be relieved of all distress and diseases (`rogam’ in Tamil)”.

The lord further clarified that once when Mount Kailash and Thirukkodikkaval were placed on a balance, the latter weighed more thereby proving its greatness.

Another legend is that the Azhwars (Vaishnava adiyarkals) were asked by Lord Venkatachalapathi of Thirupathi to worship Goddess Thripurasundari here before offering worship at Thirupathi. They could not reach this place as the river Cauveri was heavily flooded at that time. Sage Agasthyar appeared before them and advised them to pray to Lord “Karaiyetrum Vinayakar” to help them cross the river. The goddess is believed to have granted her darshan in the form of Lord Venkatachalapathi.

It is believed that Lord Yama worshipped Lord Shiva here. Lord Shiva is believed to have instructed Lord Yama that he should not punish any of his devotees who visit Thirukkodikkaval and worship him here. Similar to Banaras, the people of Thirukkodikkaval do not fear the lord of death. It is also believed that there are 1008 devas surrounding Lord Shiva here and hence, there is no cremation ground (“Rudra Bhoomi”) in this village. The villagers are using the ground which is on the other side of the river bank.

Another legend associated with this place is that of Saint Haradhathar. Haradhathar was born in a Vaishnav family in Kanchanur, a nearby village. He later became an ardent Lord Shiva devotee. He used to visit 7 Shiva temples (Thiruvalankadu, Thiruvavaduthuri, Aduthurai, Thirumangalakkudi, Thirumanthurai, Thirukkodikka and Kanchanur) every day before taking his dinner. One day when he left this temple, there was heavy rain and in the darkness, he was unable to find the way back to his village. It is believed that Lord Shiva came in the guise of a villager and took him to Kanchanur.  Haradhathar offered the prasad which he got from Kanchanur temple to that villager. When he visited this temple the next day, he was surprised to see that the food he had given to the villager last night was placed in front of the lord. Haradhathar realised that the villager was none other than Lord Shiva himself. 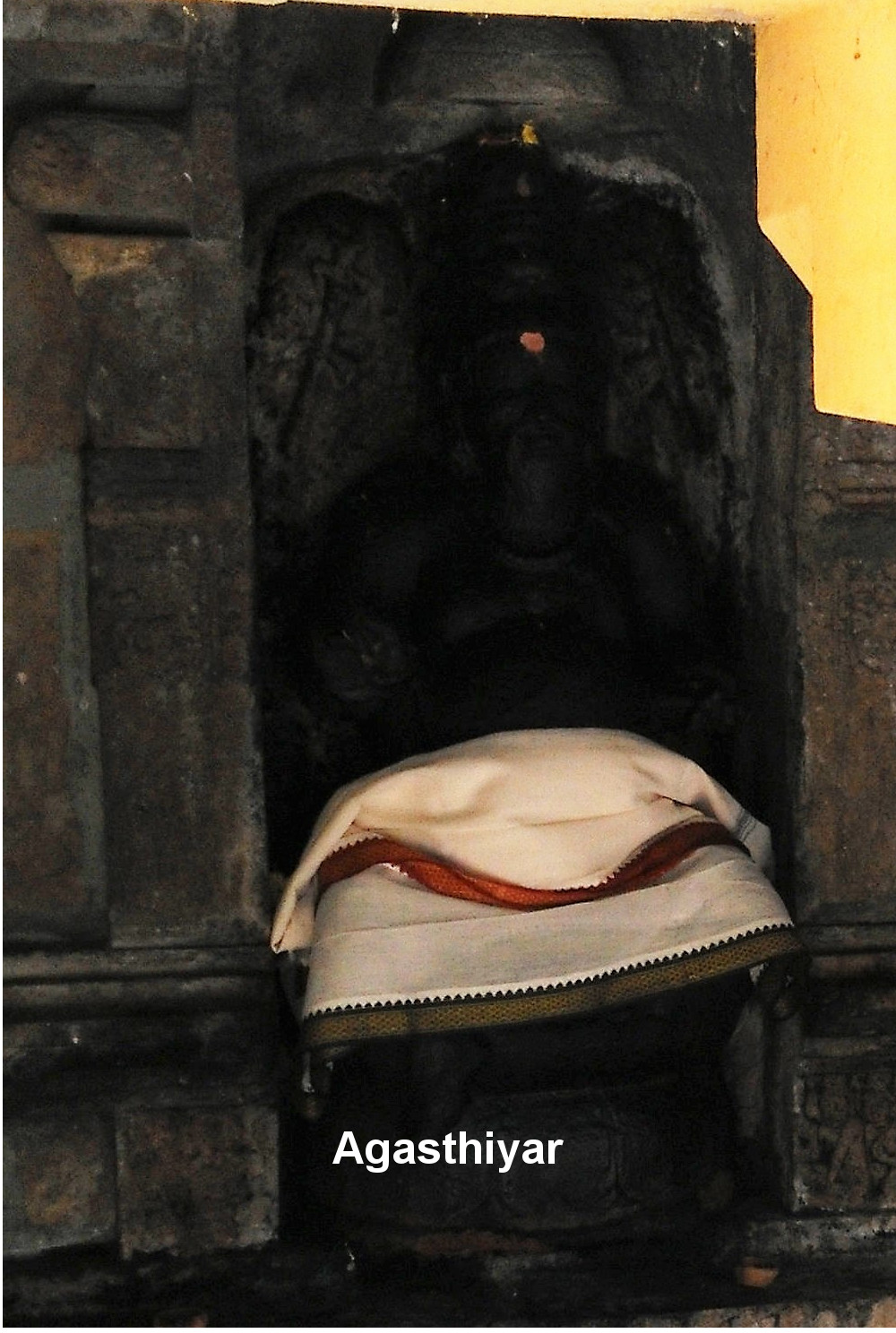 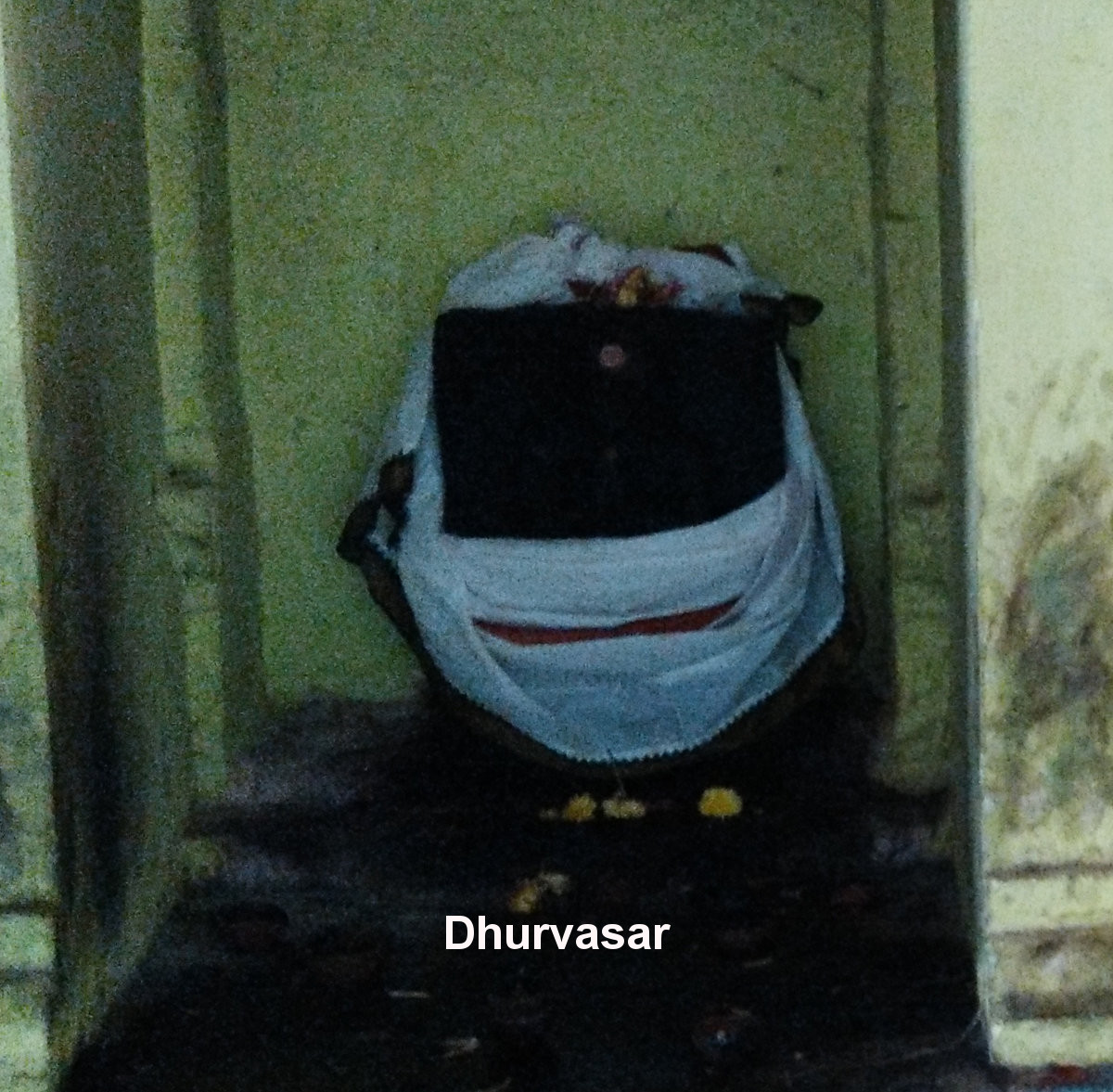 Sage Agasthiyar is believed to have installed a Vinayakar here made out of sand and worshiped him. This Vinayakar is known as “Sri Karaiyetrum Vinayakar”.

Apart from these idols, the corridors have Shivalingams in the names of the four vedas (Rig, Yajur, Sama and Atharvana) and three Shivalingams that were worshiped by the mukkodi Devas.

Lord Saneeswarar and Lord Yama are facing each other. Similarly, Chitragupta (the Accountant of Lord Yama) and Sage Dhurvasar are placed opposite to each other.

The idol of Saneeswarar’s wife Jeastadevi along with their son Manthi and daughter Mantha can be seen in a carving made out of a single stone.

In the “koshtam” (place surrounding the sanctum sanctorum), idols of Narthana Vinayakar, Natarajar, Karaikkal Ammaiyar, Dakshinamurthy, Lingothbavar, Brahma, Astapuja Durgai, Pitchadanar and Agasthiyar can be seen. Lord Brahma’s idol is in two places - one in koshtam and the other in a separate smaller shrine.

The stone idol of Lord Natarajar with Goddess Sivakami is very beautiful and is worth seeing. 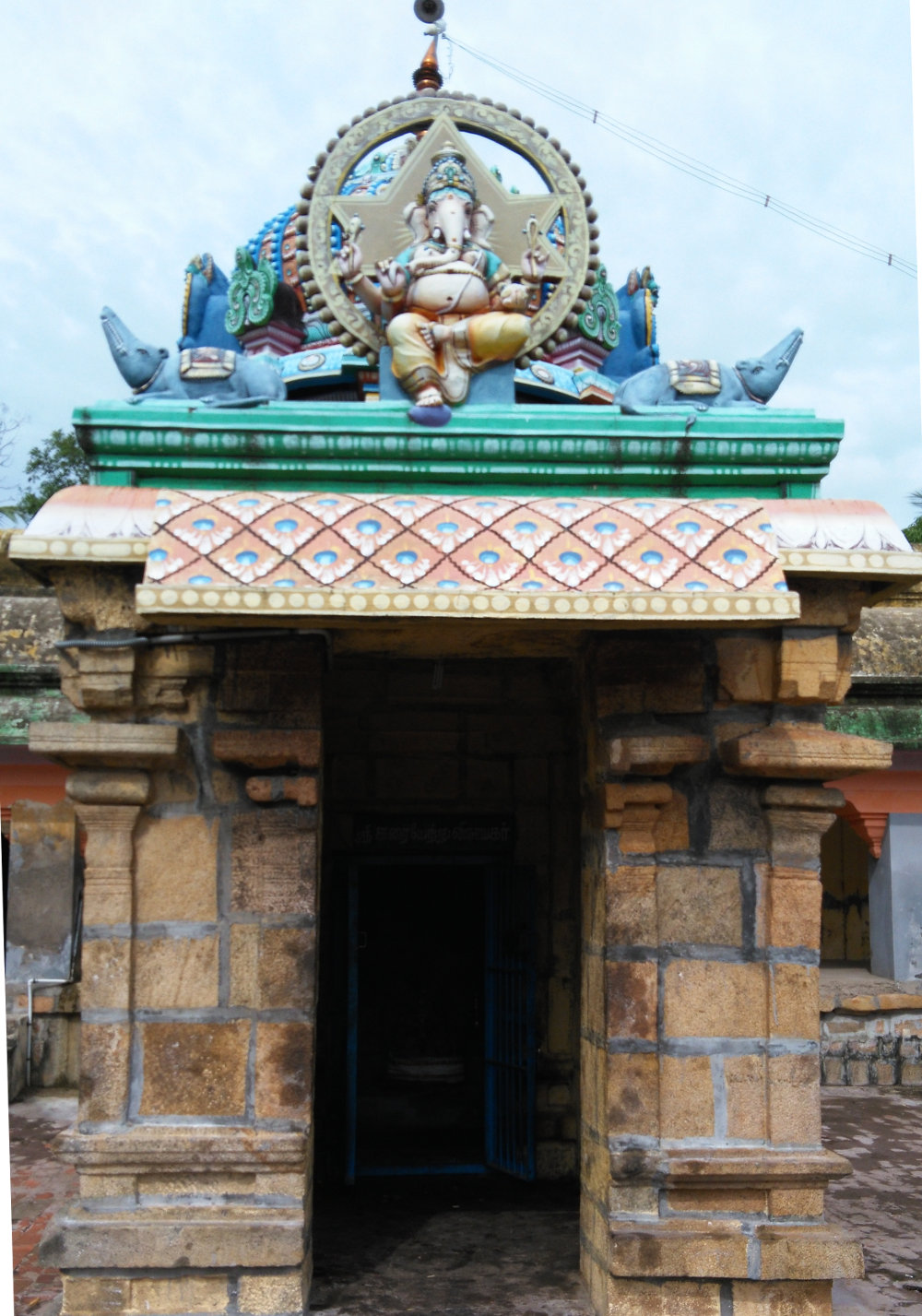 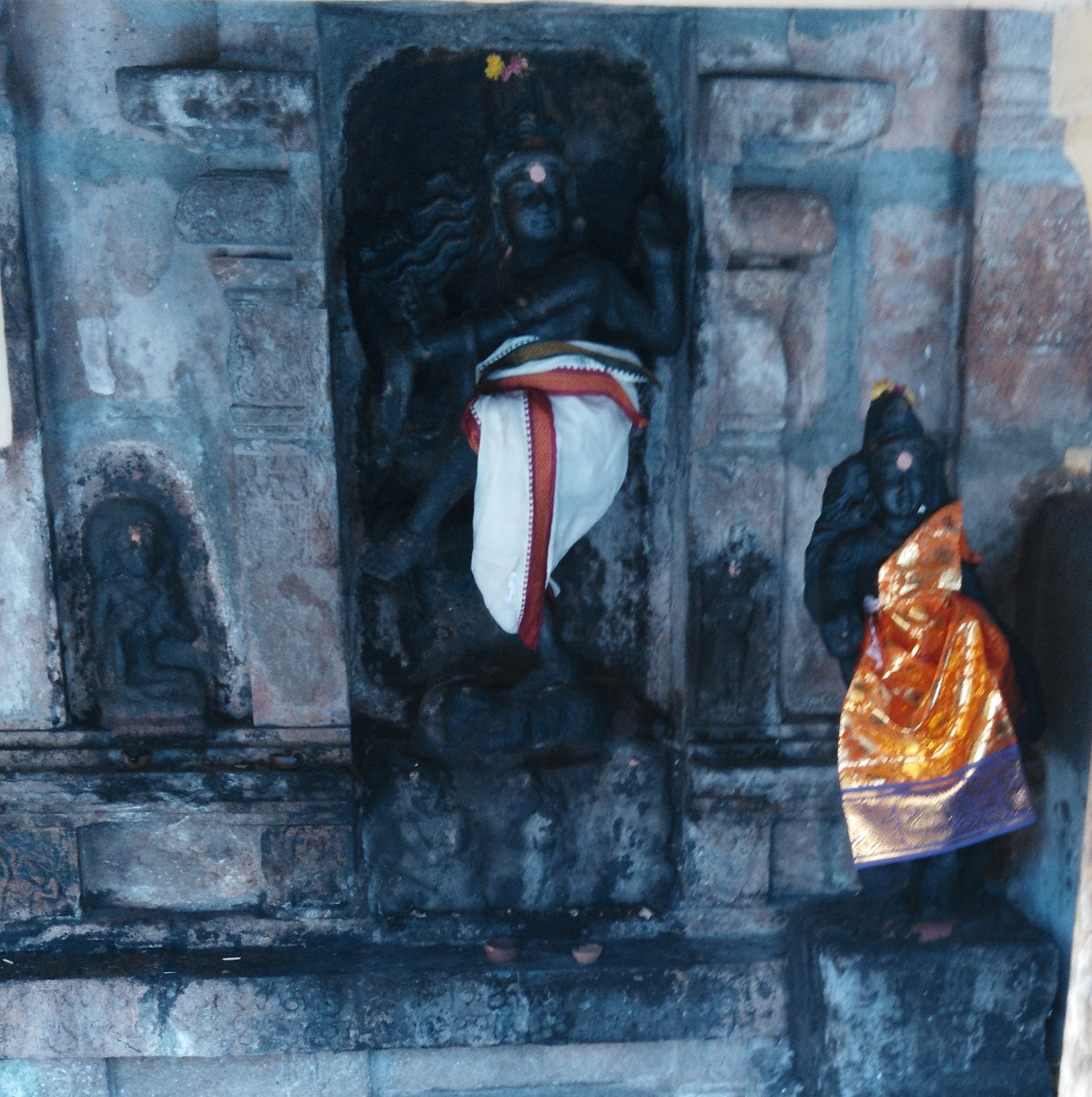 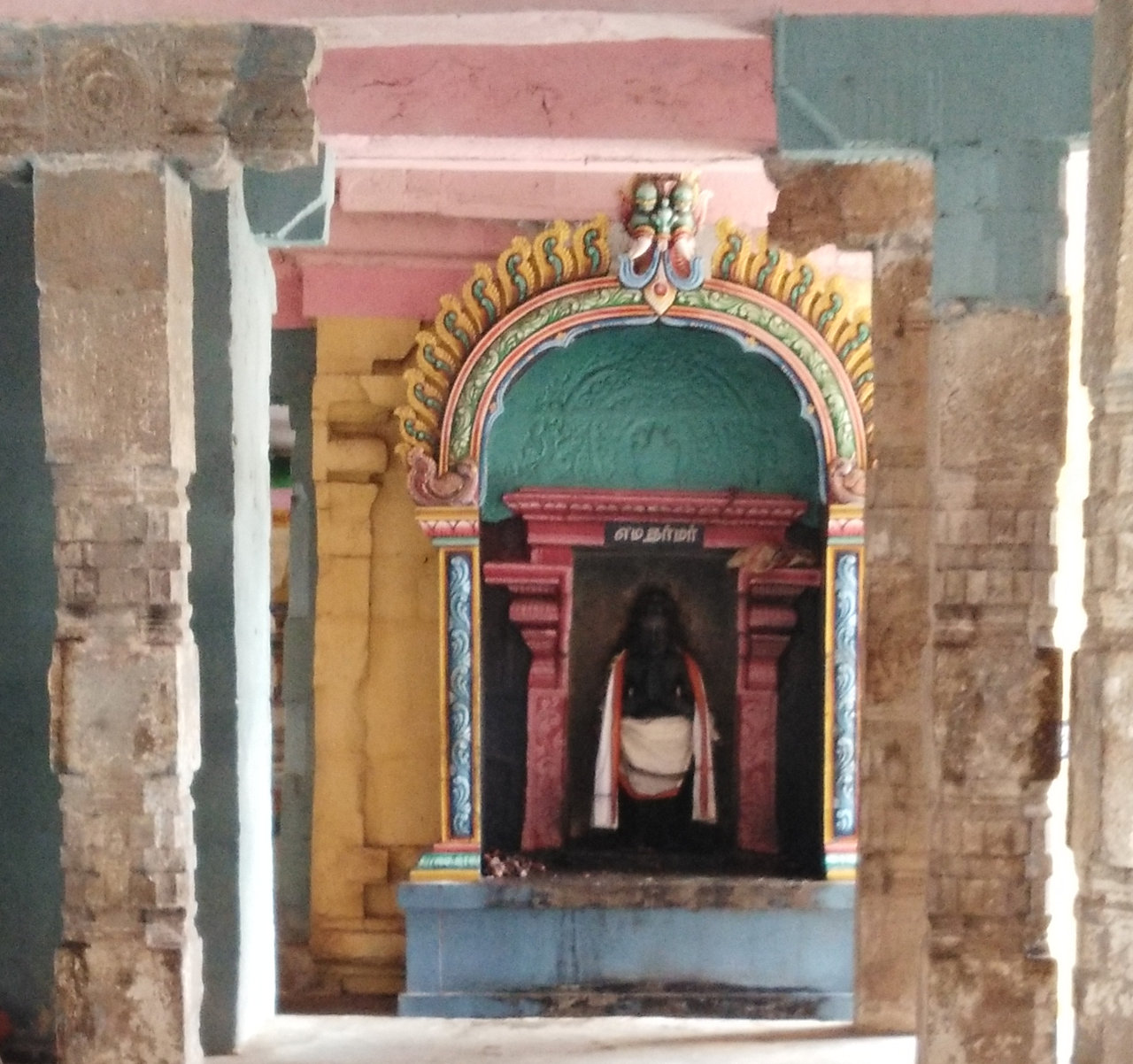 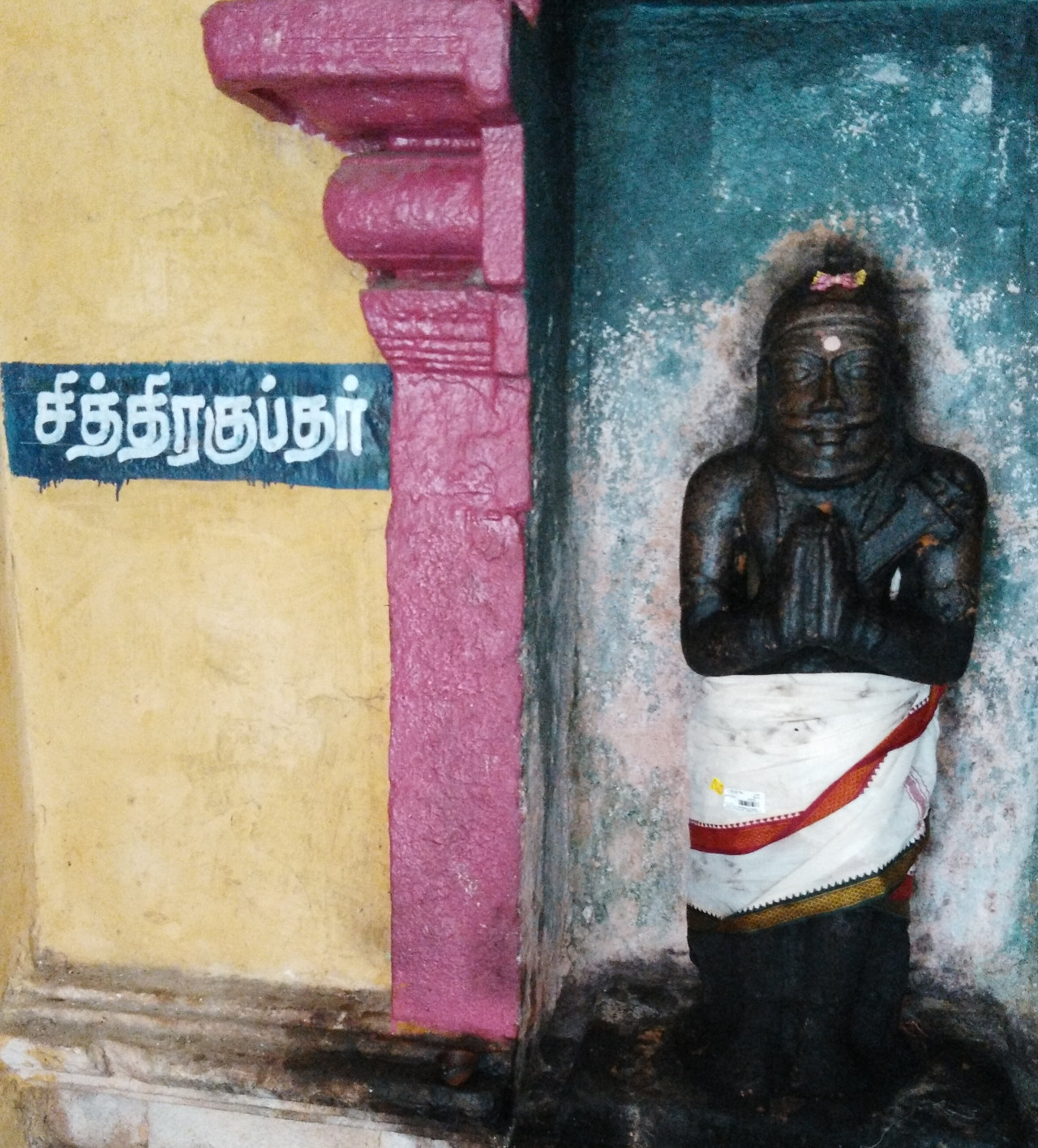 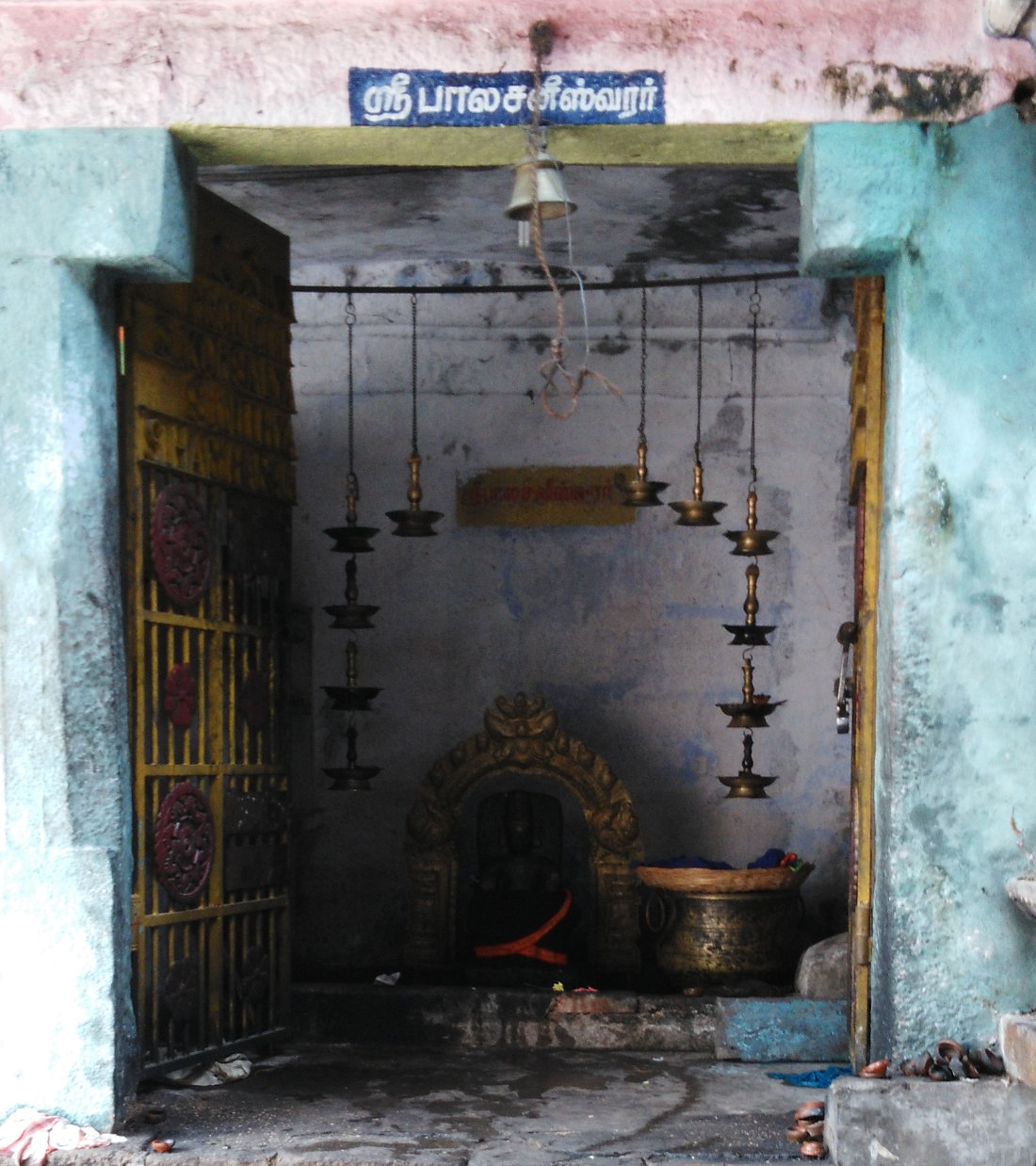 Lord Vinayakar is praised as “Sri Karaiyetrum Vinayakar” meaning that he would be a guide for those facing hardships and difficulties.

It is believed that Lord Suryan (Sun) worships Lord Shiva of this temple by directing his rays on the lingam for three days - 19th to 21st in the Tamil month of Aadi (Jul-Aug).

It is believed that Queen Sembiyan Madevi, wife of Chola King Gandaradithyan, offered gold equal to her weight (“Dhulabara Nerthi”) to the lord of this temple. She started the practice of making offerings equal to one’s weight.

There are many beautifully carved sculptures in this temple. Of these sculptures, those of Kamadenu, Karpaka Viruksham and Lord Krishna are especially worth mentioning. Other sculptures and reliefs depict battlefields involving war horses and elephants and everyday scenes of women dancing and playing musical instruments.

Here Lord Saneeswarar is known as Bala Sani. He is holding a Shivalingam on his head and has “Garudan” as his mount.

It is believed that performing meditation, yagna and prayers in this temple would yield triple benefits.

The sanctum sanctorum of this temple is in the form of semi-circular tank (“akazhi” in Tamil).

The “Sakthi Upasagar”, Sri Bhaskaracharya (1690- 1785) lived in an adjacent village called Bhaskararajapuram. It is believed that he composed the book, "Sowbhagya Bhaskaram" in Goddess Thiripurasundari’s shrine in this temple. This book explains the meaning and significance of Lalitha Sahasranamam. It is believed that his “bhashyam” (explanations) was approved by Goddess Parvathy and was introduced to the world.

The Cauvery flows here as Uthiravahini (south to north direction). Taking a dip in the river and the theertham before worshiping the lord and goddess here in the Tamil month of Karthigai (Nov-Dec) is considered very auspicious. It is believed that by doing so one would be absolved of all their sins.

It is believed that worshiping the lord on a Pradosham day would yield the same benefit of conducting the grand “Ashvametha yagna”.

Since both Yama and Chitragupta can be worshiped together here, devotees believe that by worshiping them they would be relieved of “Yama Bhayam” (fear of death).

Skanda Shashti and Annabishekam in the Tamil month of Aippasi (Oct – Nov), 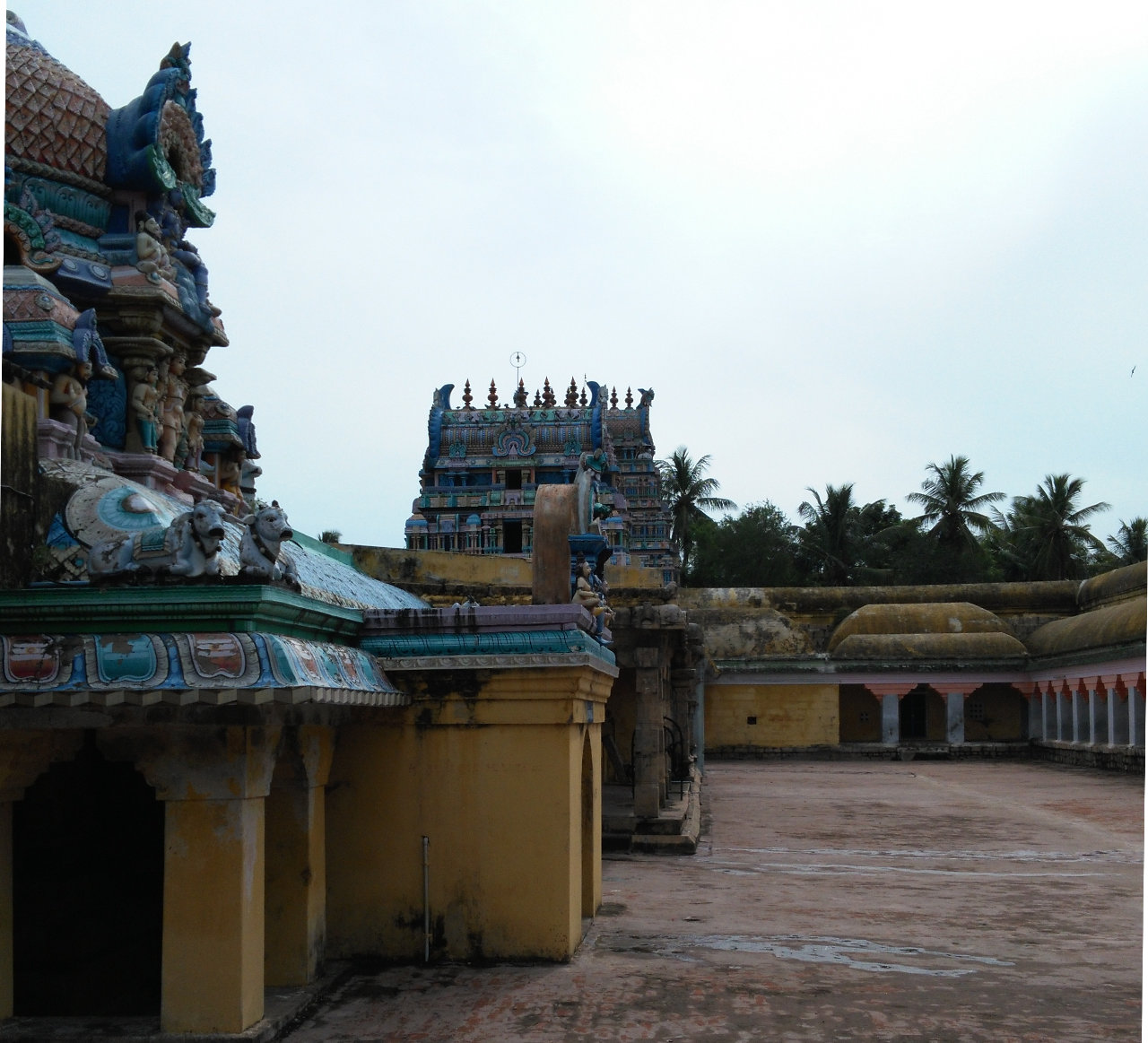 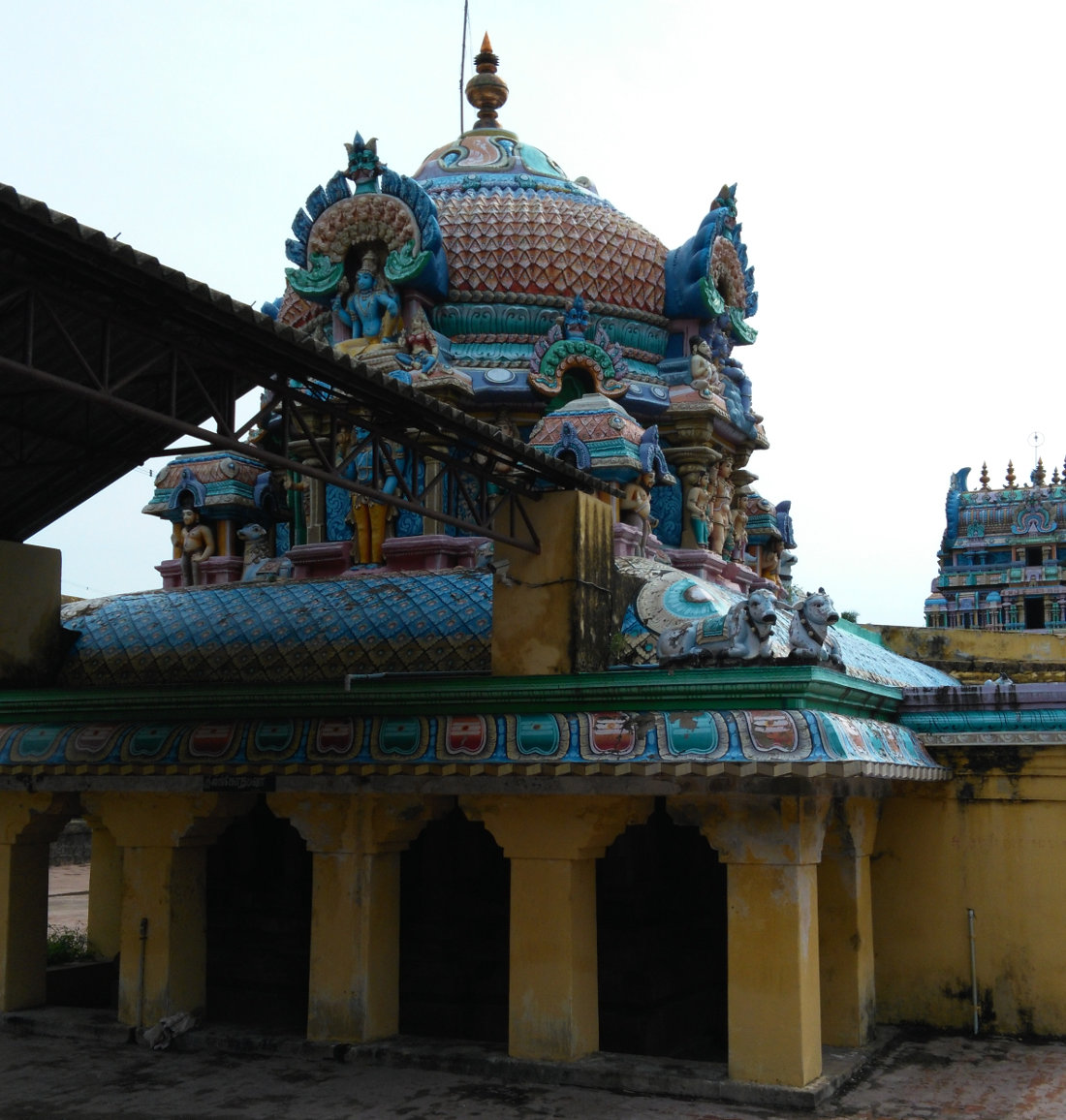 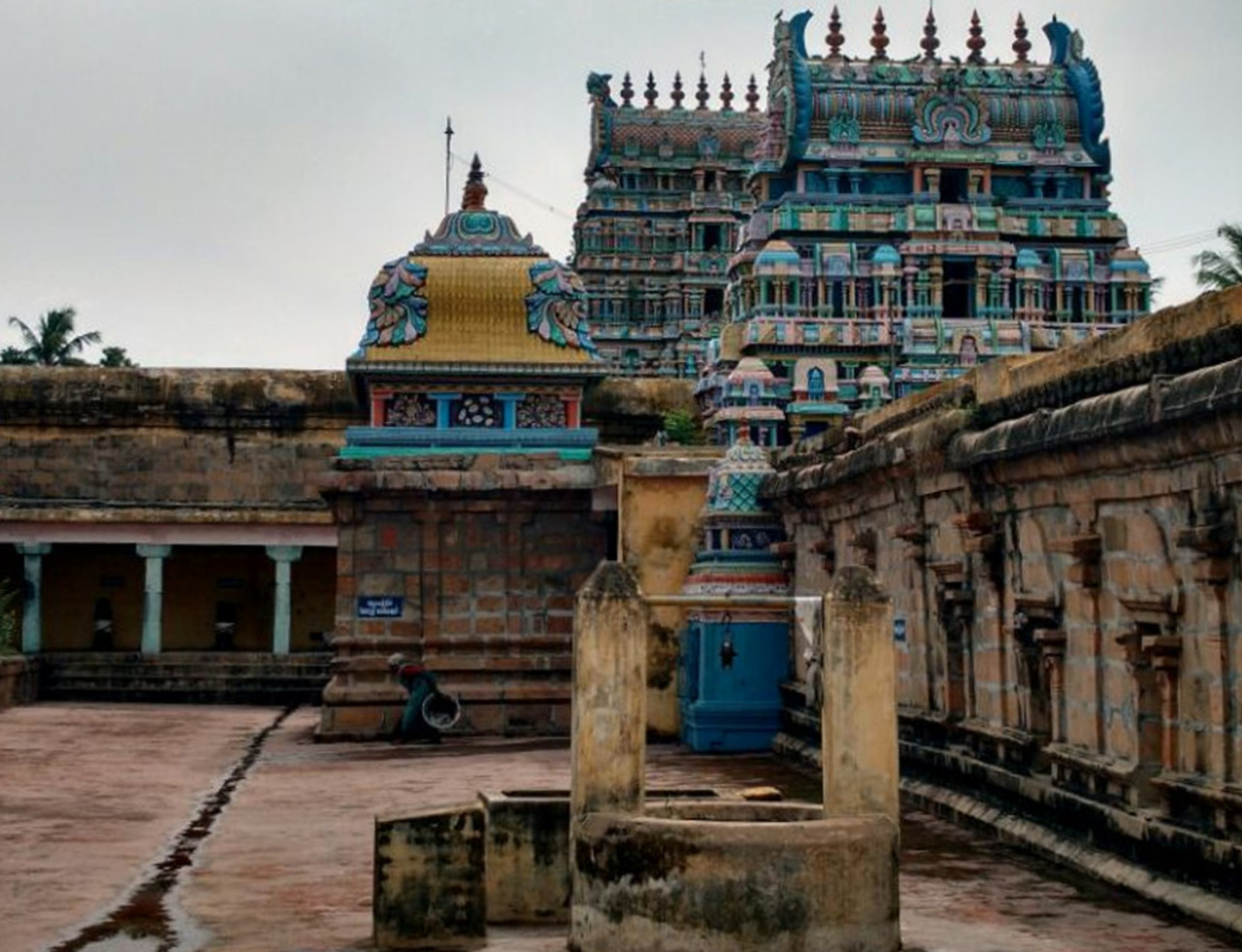