Visited on: 11th January, 2017. I have also had the honour of working as a priest in this temple for many years.

Thirunthudhevankudi is situated at a distance of about 10 kms from Kumbakonam on the Kumbakonam to Mayiladuthurai route. Take the diversion road from Thiruvisanallur and travel for about 2 kms to reach this temple. Nearest railway station is Thiruvidaimaruthur which is about 6 kms away from this place.

This temple is surrounded by a moat called Thirumaruvum Poigai in the midst of lush green fields. This moat is in the form of a semicircle (“Akazhi” in Tamil) around the temple.

Nowadays, there is no village or residence near this temple and is totally surrounded by agricultural lands. In his hymn, Saint Thirugnanasambanthar referred to this village as "Thenum vandum isaipadum devankudi” meaning that this village is alive with the hum of bees and insects.

In ancient times, this place is considered to be a medicinal hub with lots of medicinal plants.

There are few stone inscriptions in this temple which date back to the periods of Chola Kings Kulothunga-I, Vikraman, Rajathirajan-II, Rajarajan and Queen Sembian Maadevi. 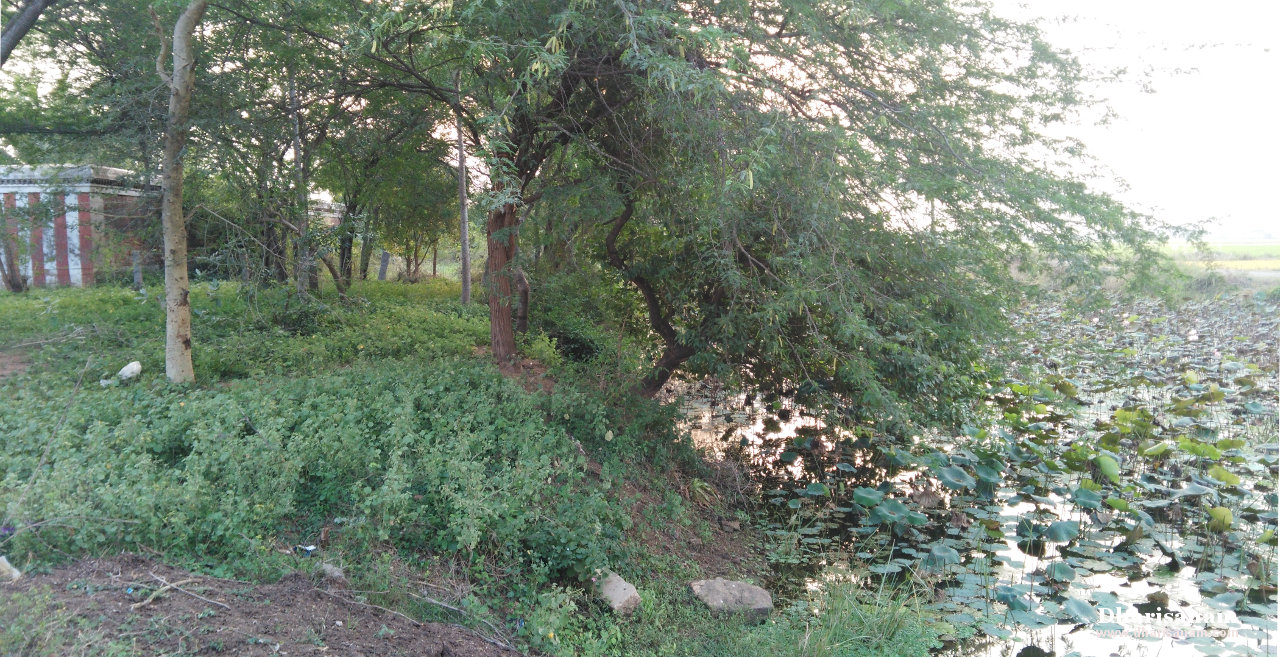 The legend is that Lord Indra, the king of Devas, following the advice of his Guru Prahaspati, worshiped the Lord here with 1008 Sengazhuneer flowers (Lily) daily after taking a dip in this temple’s theertham (Pushkarini). Lord Varunan was given the task of growing those flowers in the temple’s tank. One day, Indra ran short of a flower during his pooja. He asked Varunan about it but Varunan replied by saying that he had counted 1008 flowers. When this is continued for a few more days, Indra decided to keep a watch on the flowers. He noticed that one of the flowers was moving out of the tank and into the sanctum sanctorum through the drain. On closer scrutiny, he saw that it was a Crab (“Nandu” in Tamil and “Karkadam” in Sanskrit) that was bringing the flower inside the sanctum and offering it to the lingam. Angered by its act, he was about to hit the Crab which was on top of the lingam. Lord Shiva instantly formed a hole on the lingam and took the Crab inside. Indra realise his mistake and surrendered to the lord asking him for forgiveness.  Lord Shiva pardoned him. Because of Indra’s attempt to strike the crab, a huge cut can still be seen on the Shivalingam. Since then the lord came to be known as Sri Karkateswarar. The hole created by the lord can be seen during arthi.

As Lord Indra tried to rectify his mistake here, this place gets the name Thirunthu Devan Kudi (“thirunthu” meaning correction, Devan is a reference to Lord Indra and “Kudi” meaning village in Tamil). However, locals call this place as Nandaan Koil.

It is believed that once Sage Durvasa was mocked at by a Gandharva (a community known for their skill in music in the celestial world) that he walked like a crab. The angry sage cursed the Gandharva to become a crab. When he begged for pardon, the sage advised him to worship Lord Shiva in this temple for relief. He followed the advice of the sage and was absolved of his sin.

Another legend associated with this temple is that once the Swaymbulingam of this temple was buried under the sand due to heavy floods during the reign of a Chola king. The king was afflicted with paralysis and could not be cured despite the best efforts of his physicians. He prayed to Lord Shiva for remedy. It is believed that Lord Shiva and Goddess Parvathy visited him in the form an aged couple and informed him that they can cure his illness. The king agreed and the old man applied an oil on his body and gave him some medicines. Surprisingly, the king was cured instantly and was able to stand up again. He begged the old couple to stay with him as doctors of the royal family in the palace but they refused. He then offered them some valuables but they declined to accept them. The king promised them that he would give them anything they wished. They brought the king to this place and informed him that there was a Shivalingam buried under the sand and that he should build a temple for Lord Shiva here. Thereafter both of them disappeared. The king then realized that the couple had been none other than Lord Shiva and Goddess Parvathi. The king recovered the lingam and built this temple.

There are two shrines for Goddess Parvathy here – one for Sri Arumarunthu Nayaki and the other for Sri Apoorva Nayaki. When the king built the temple, he could not find the original idol of the goddess. He made a new one and installed it as “Sri Arumarunthu Nayaki” (Goddess of rare medicine). However, within a few days, the original idol was found. He named it “Sri Apoorva Nayaki” and installed it along with the new idol.

It is believed that Sage Agasthiyar and Dhanvantari, the god of Ayurveda have worshiped the lord here.

Other than the shrines of Lord Shiva and Goddess Parvathy, shrines and idols of Vinayaakar, Murugan with his consorts, Gajalakshmi, Dhanvanthiri, Agasthiyar, Kaala Bairavar, Suryan, Chandran and Naalvar can be seen. 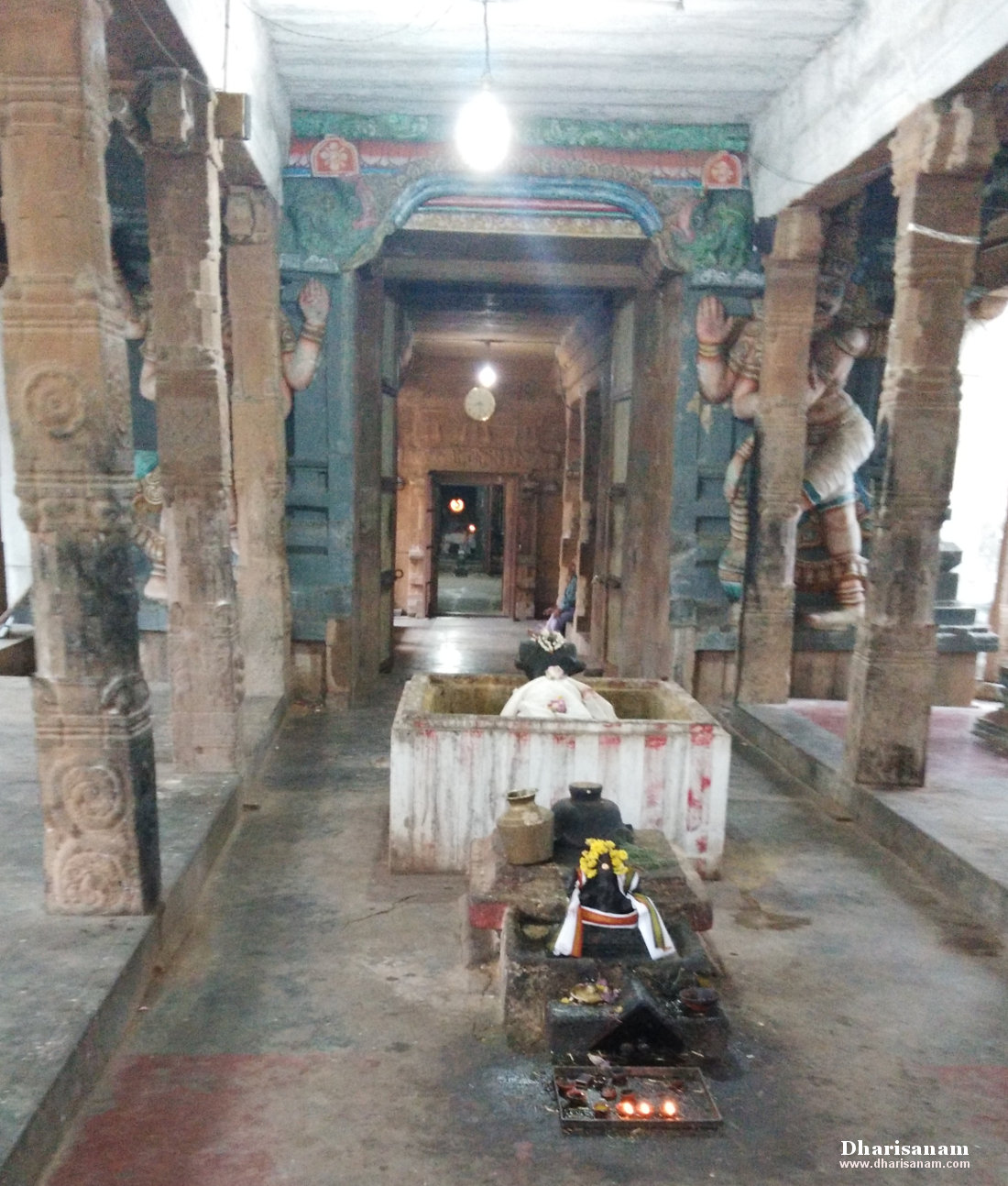 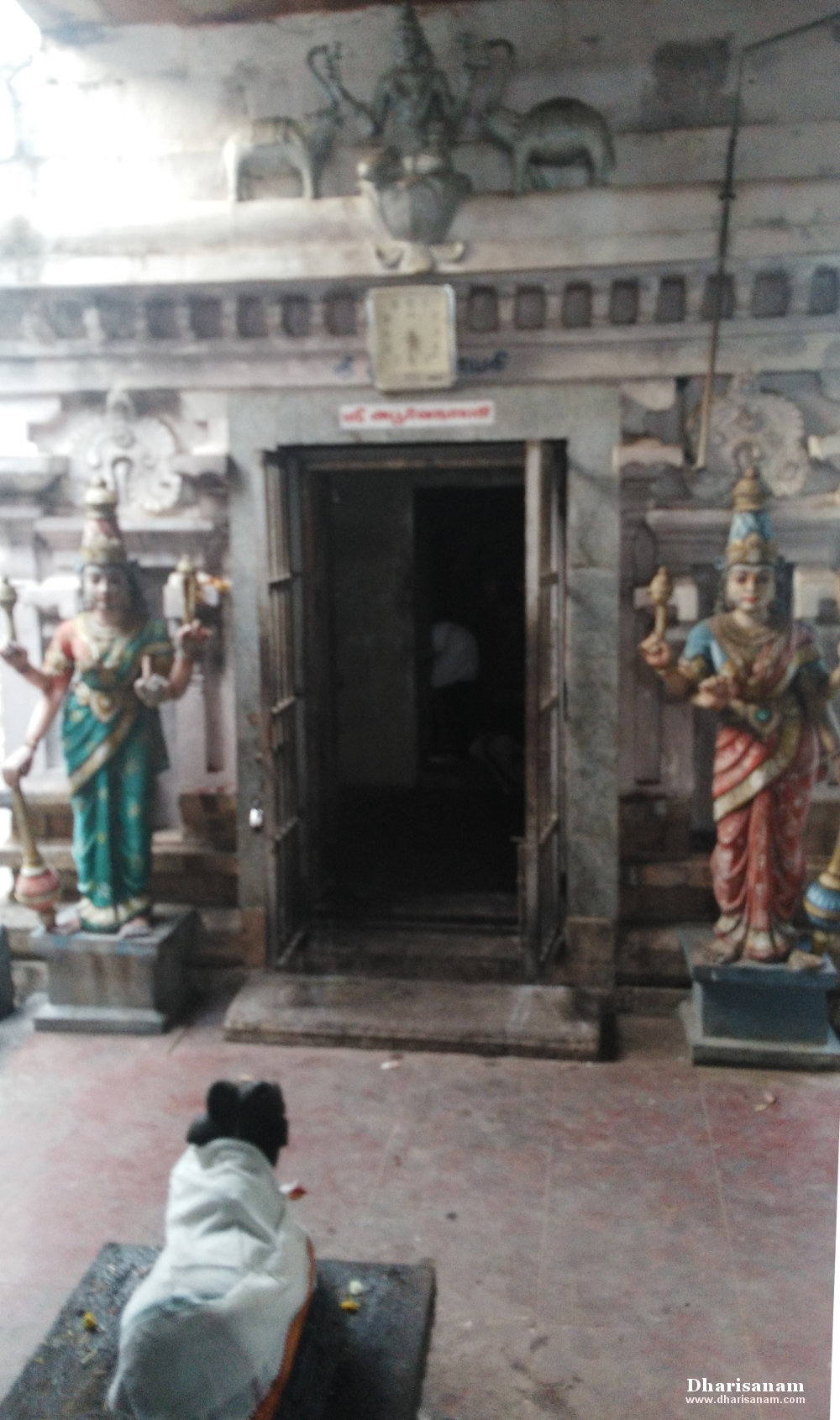 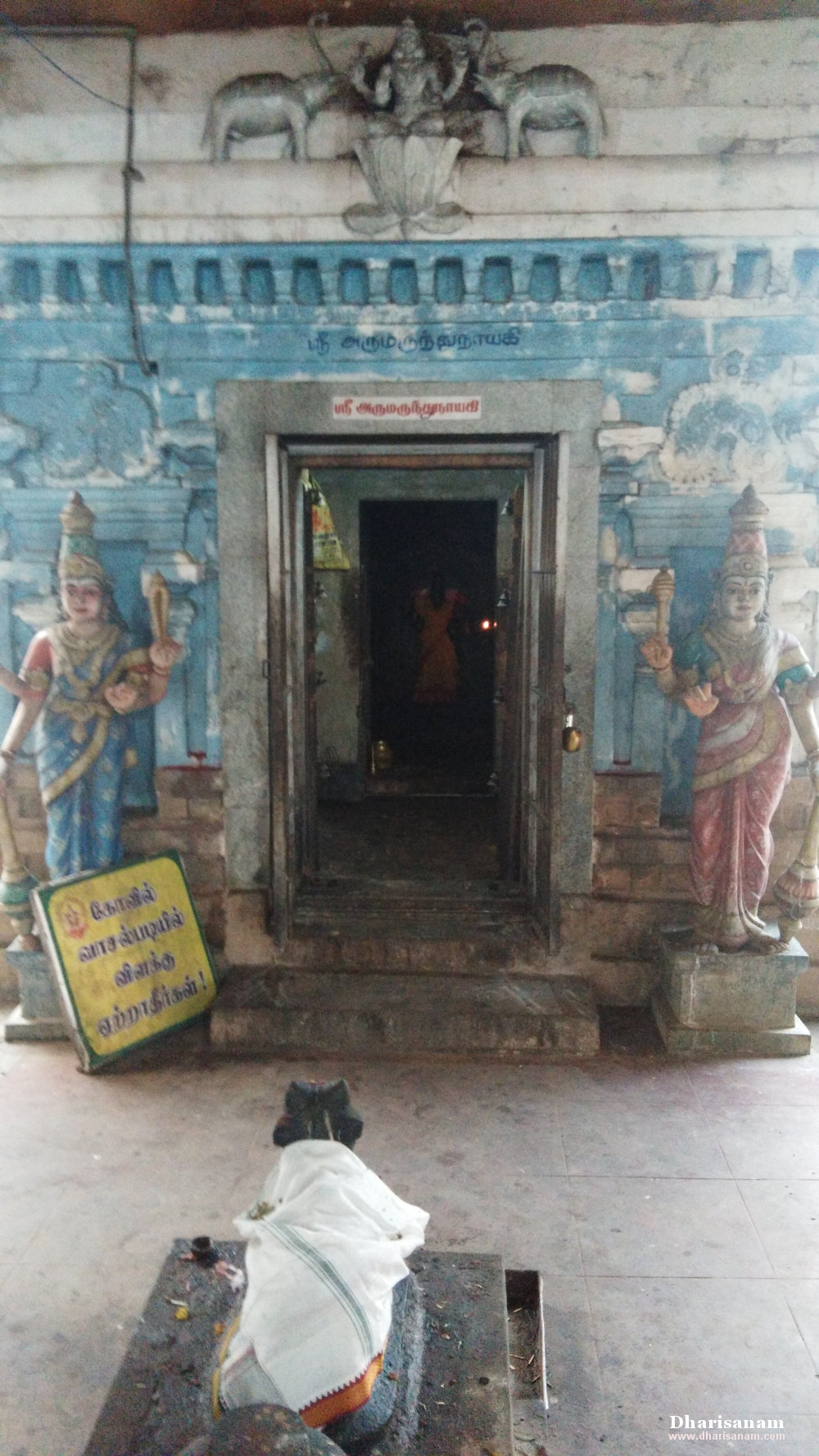 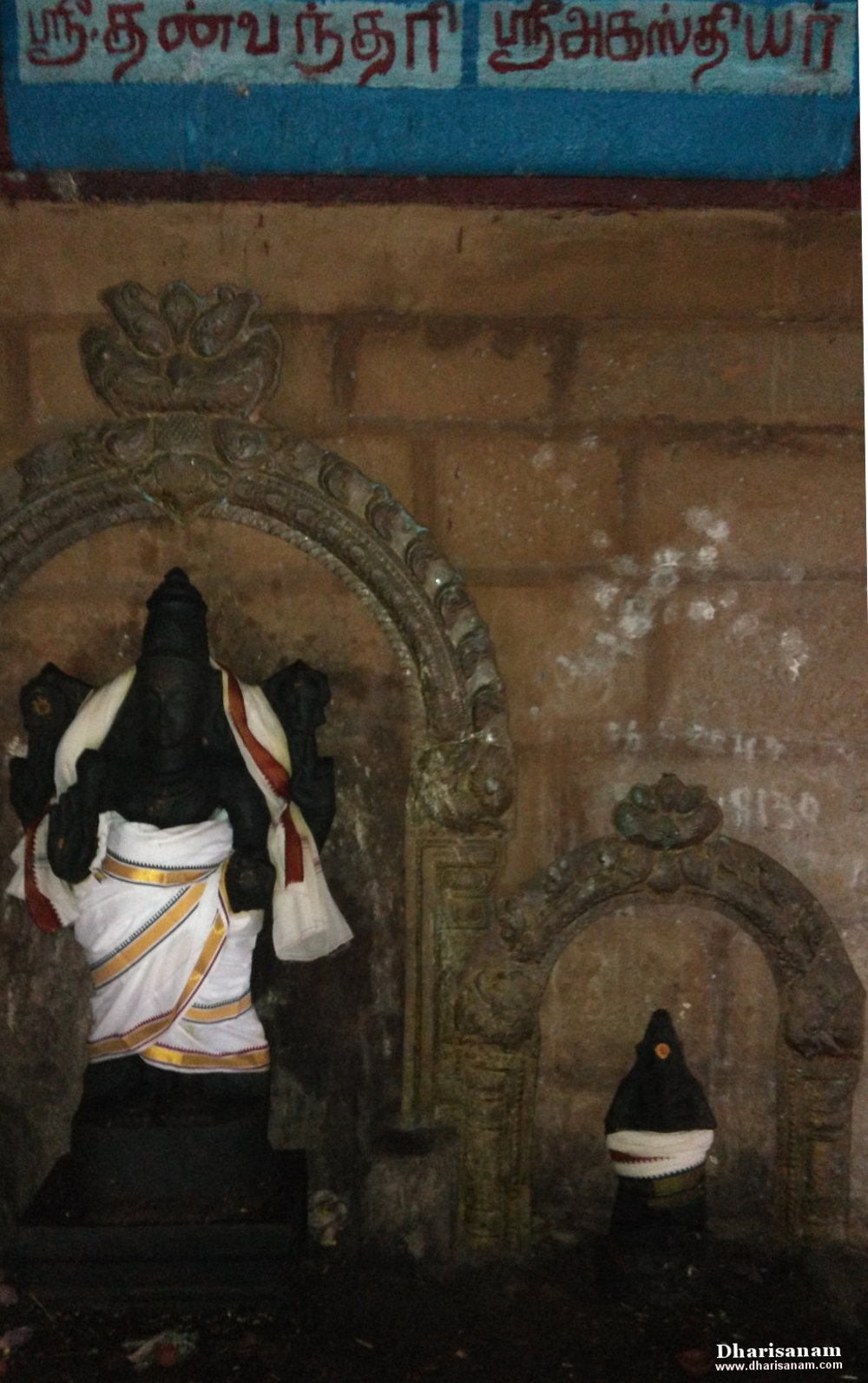 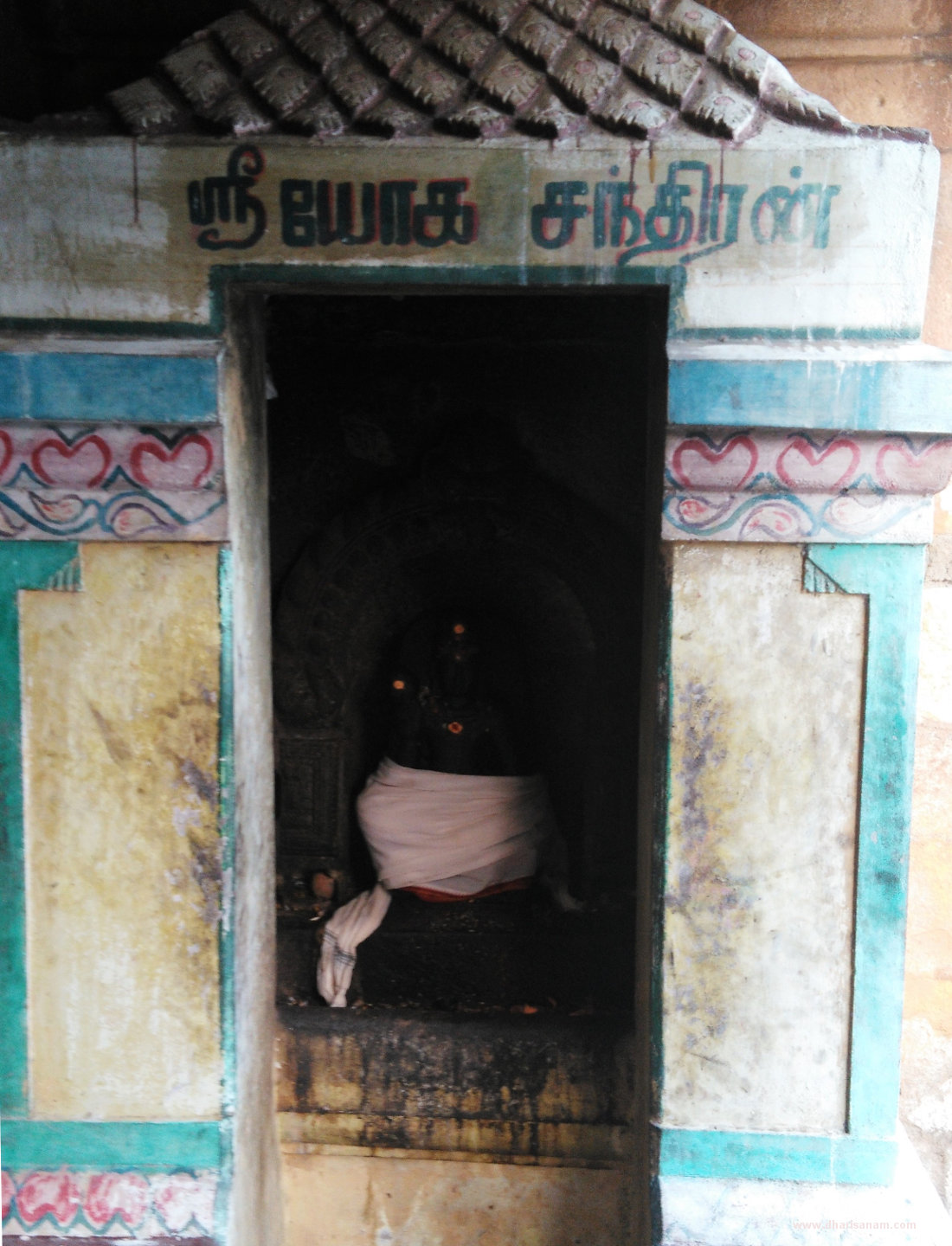 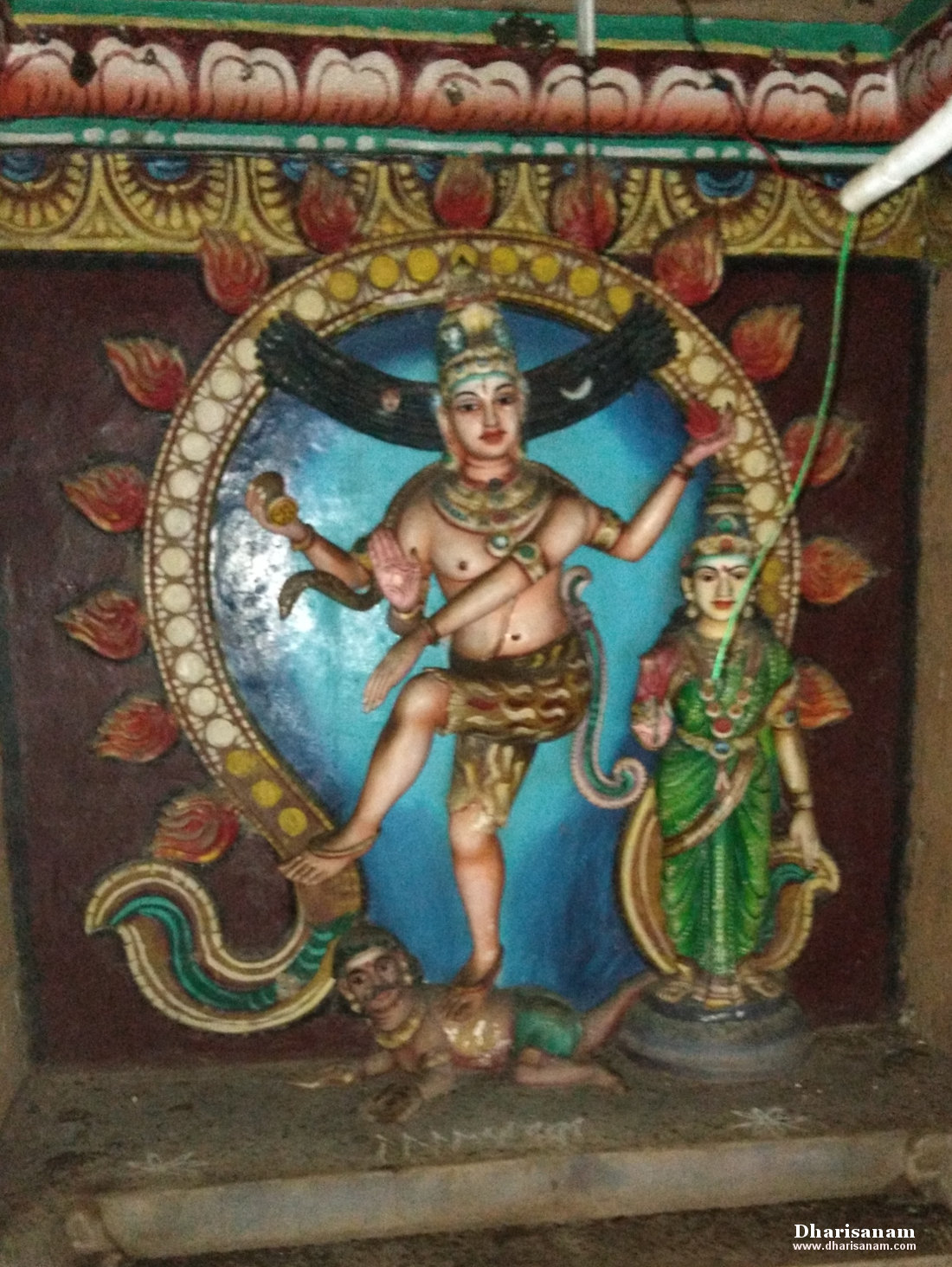 It is believed that the tank around this temple has many “Navabashana” wells in it. Taking a dip in this tank and worshiping Goddess Parvathy here will cure various ailments.

It is believed that worshiping Lord Shiva here will cure many ailments. In his hymn, Saint Thirugnanasambanthar praised Lord Shiva of this temple as a healer of diseases. The oil applied to the Goddess here is considered very auspicious.

Devotees perform abhishekam to Goddess Arumarunthu Nayaki using gingelly oil. It is believed that consuming a small portion of the oil after abhishekam will cure many diseases.

The sanctum tower’s “Kalasam” is not a usual metallic one but it is carved out of stone.

In this temple, there is a relief depicting Sage Agasthiyar handing over the locally grown herbs with exceptional medicinal properties to Dhanvantari, the god of Ayurveda. A King and his Queen are witnessing the happening while the celestial gods from the heaven are also watching it.

There are many other reliefs here that vividly portray the legends of this temple. 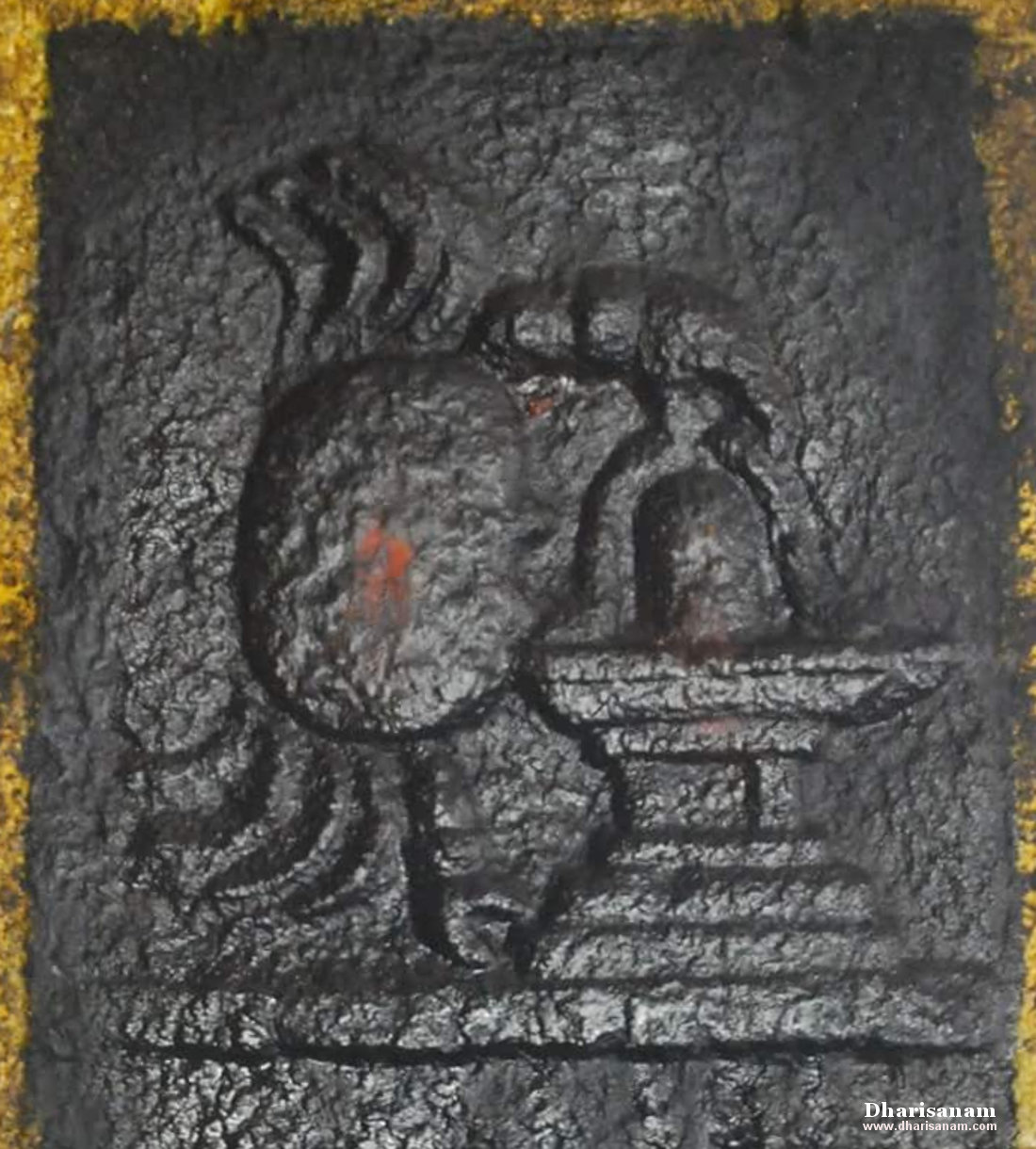 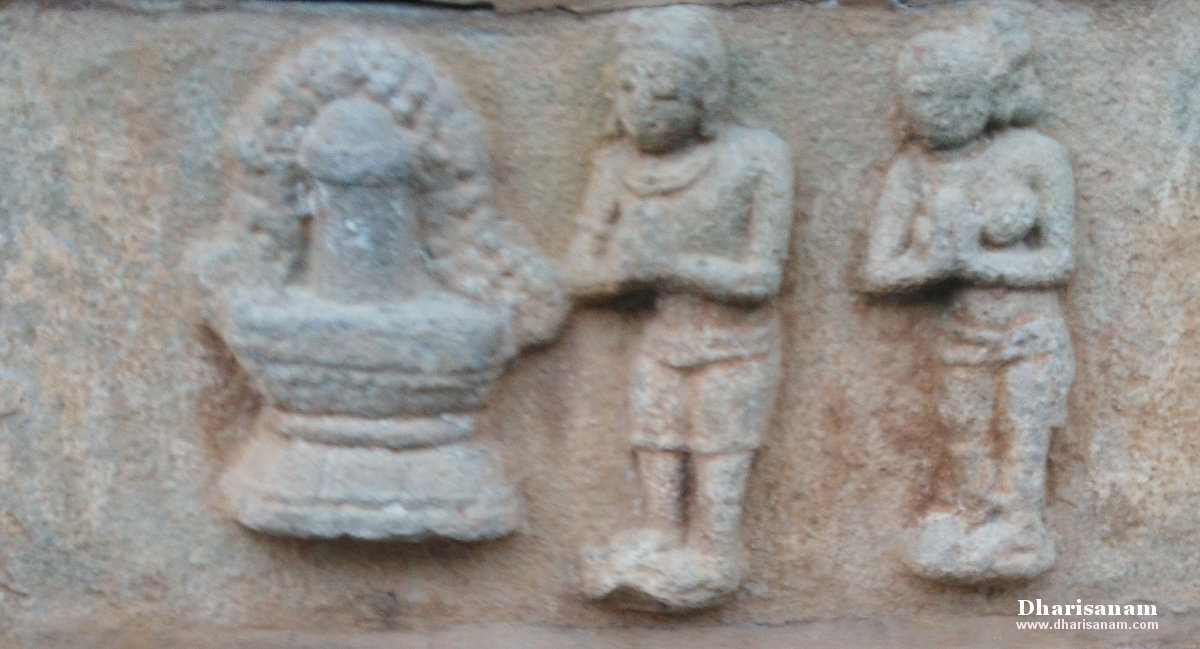 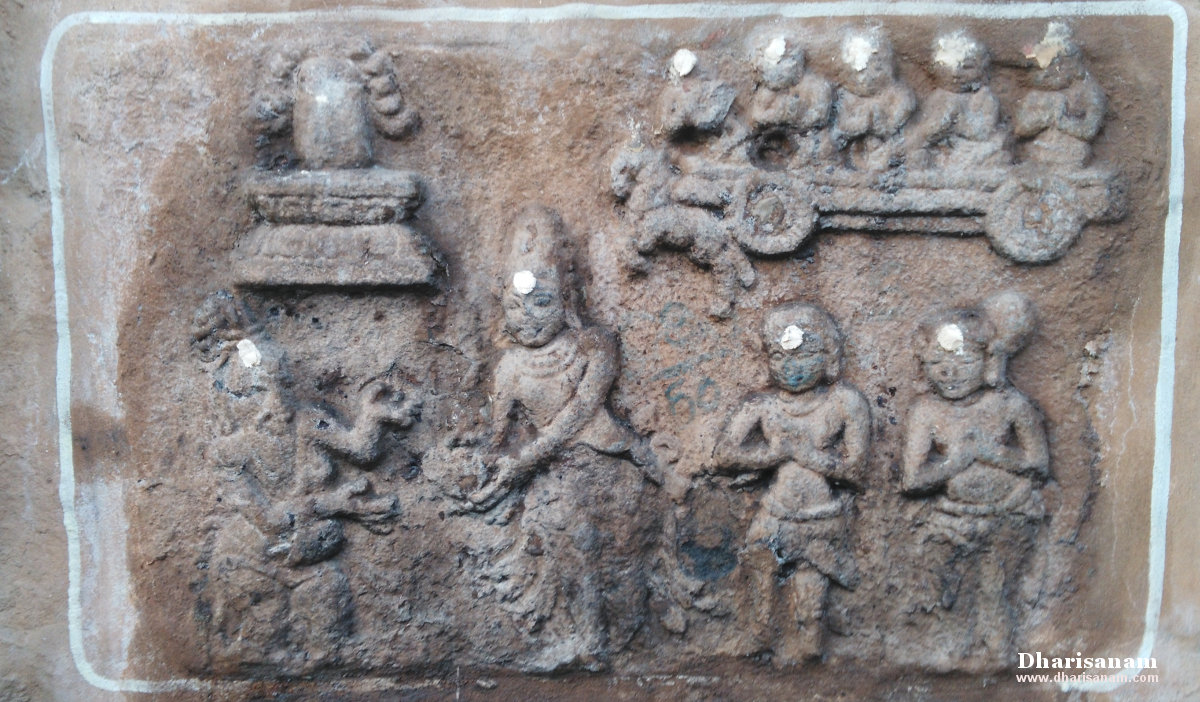 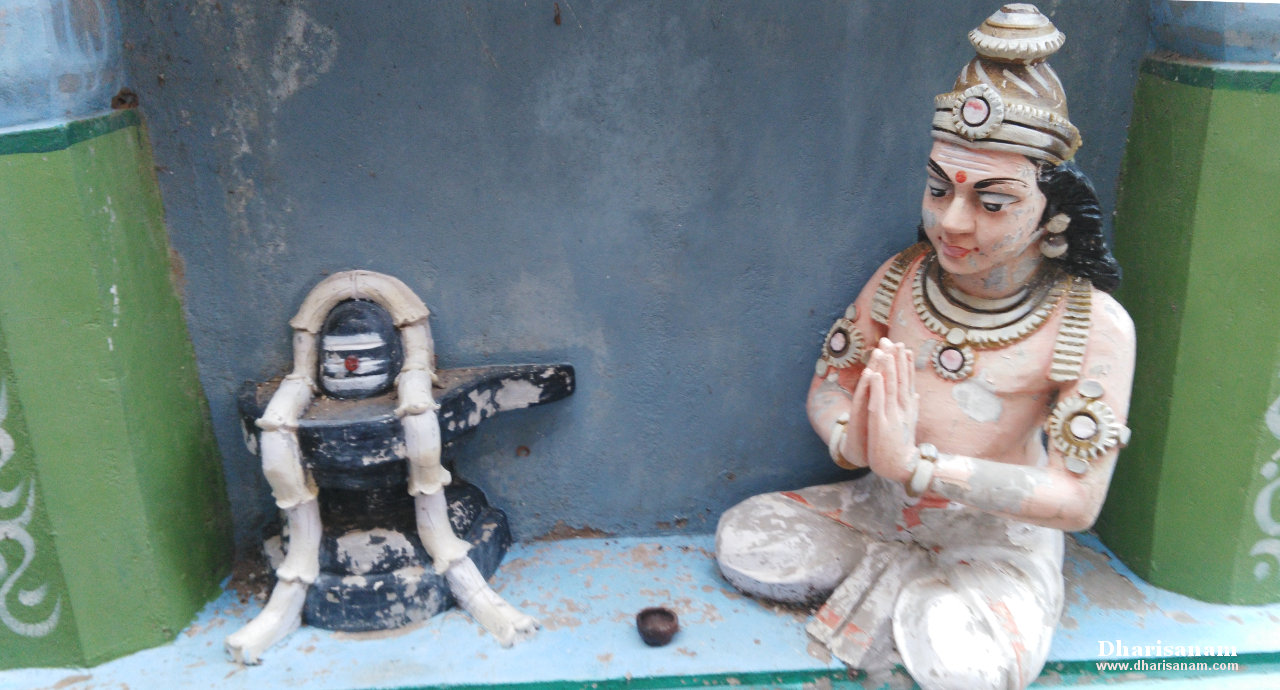 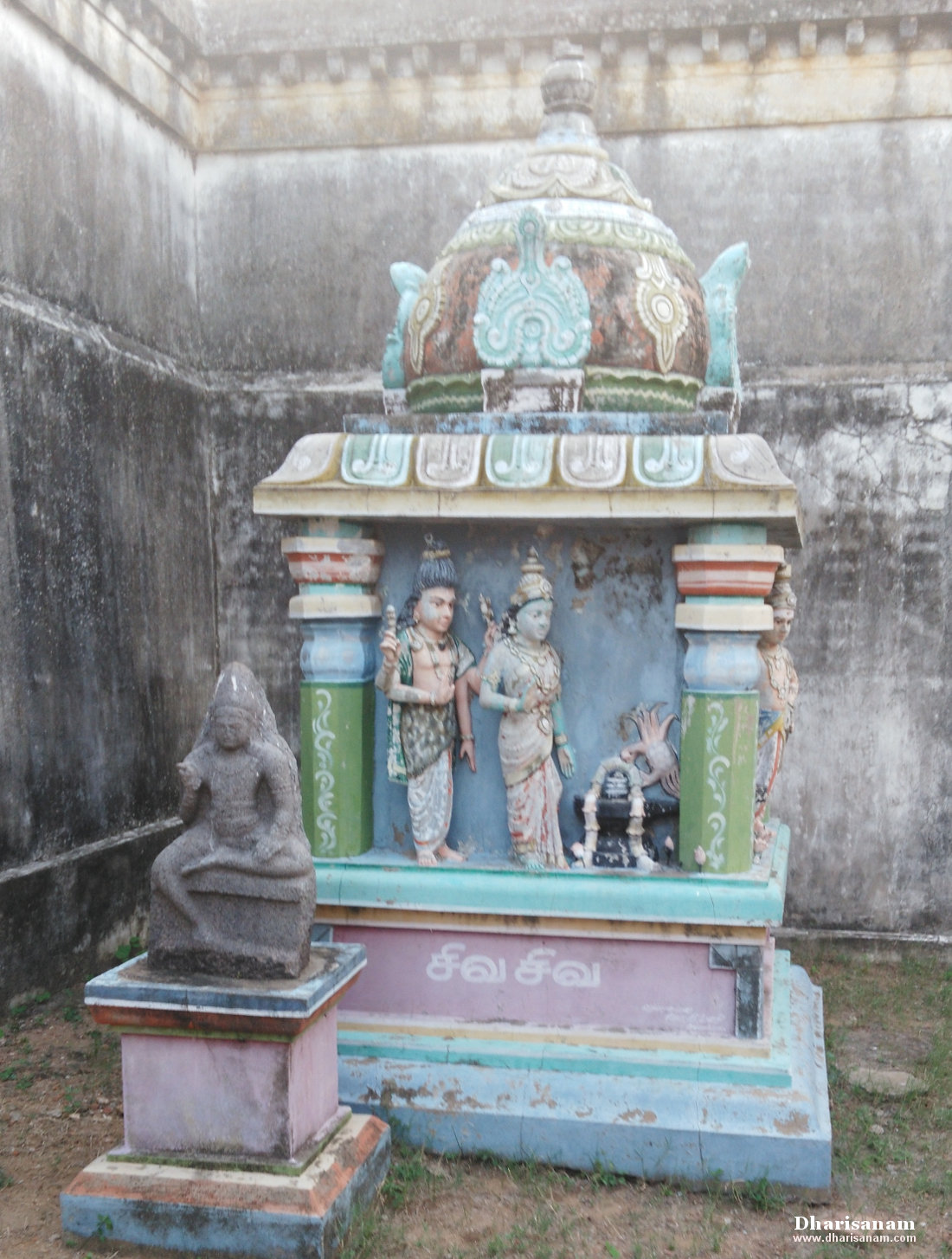 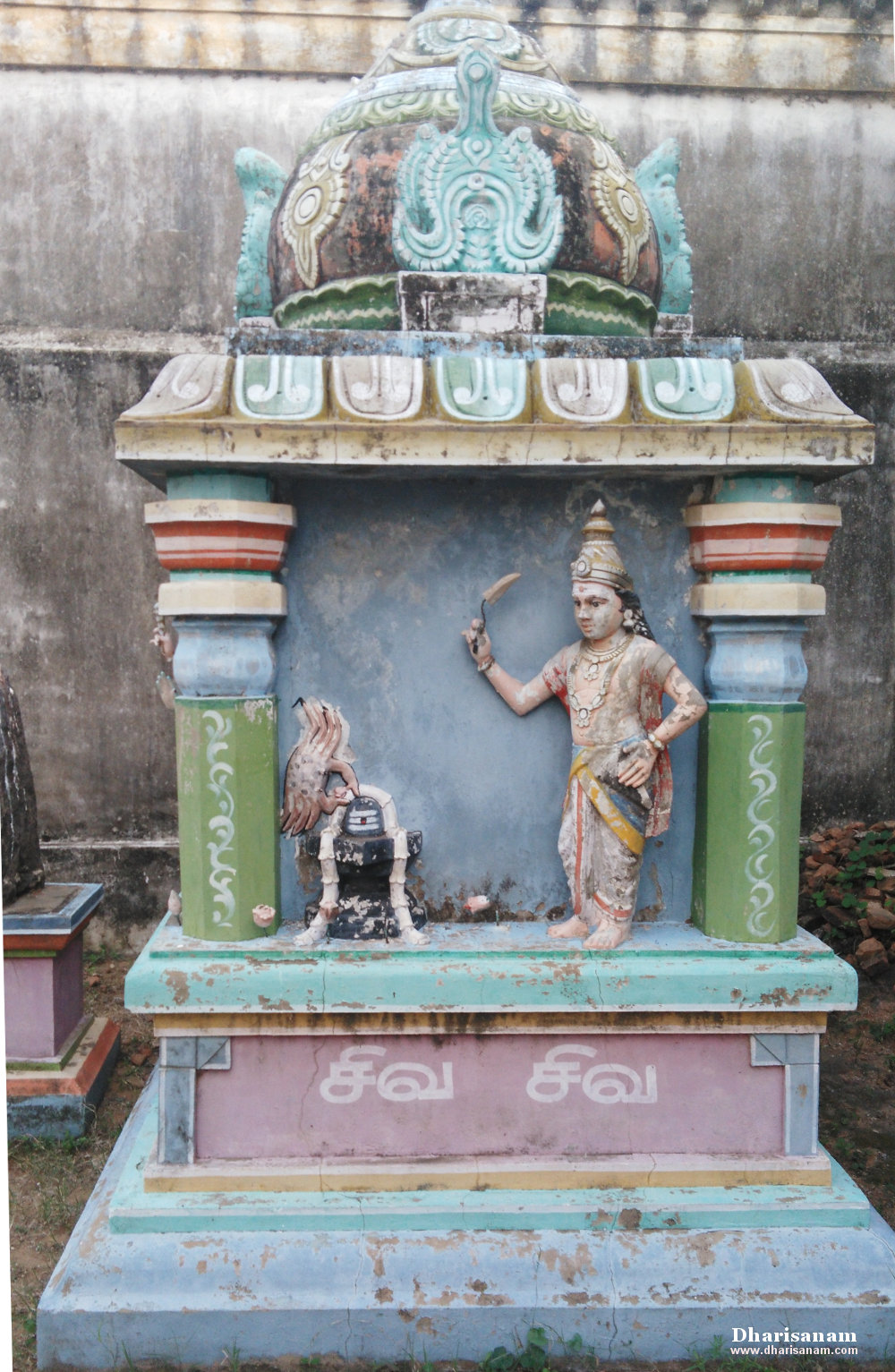 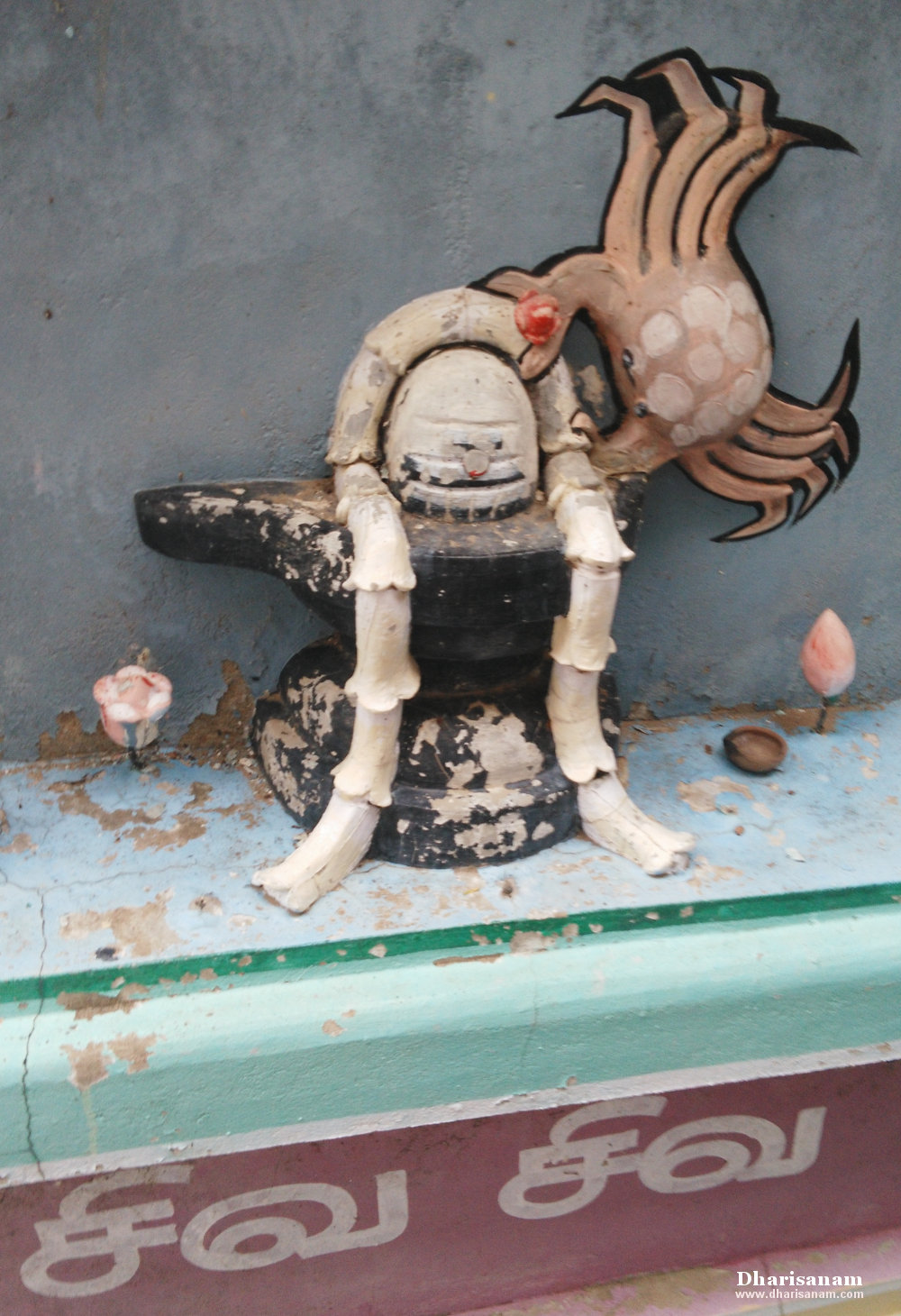 This is also a famous parihara sthalam for those born during the periods of the constellations Punarpusam, Pusam and Ayilam (Kadaka raasi). 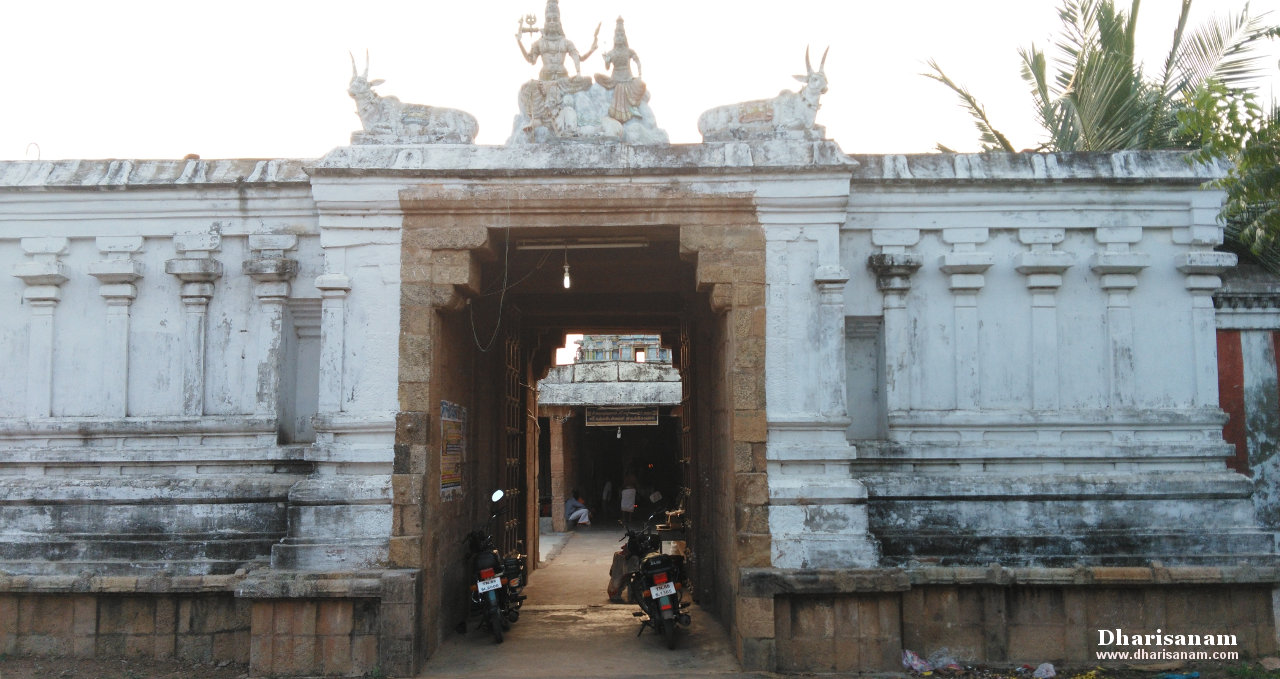 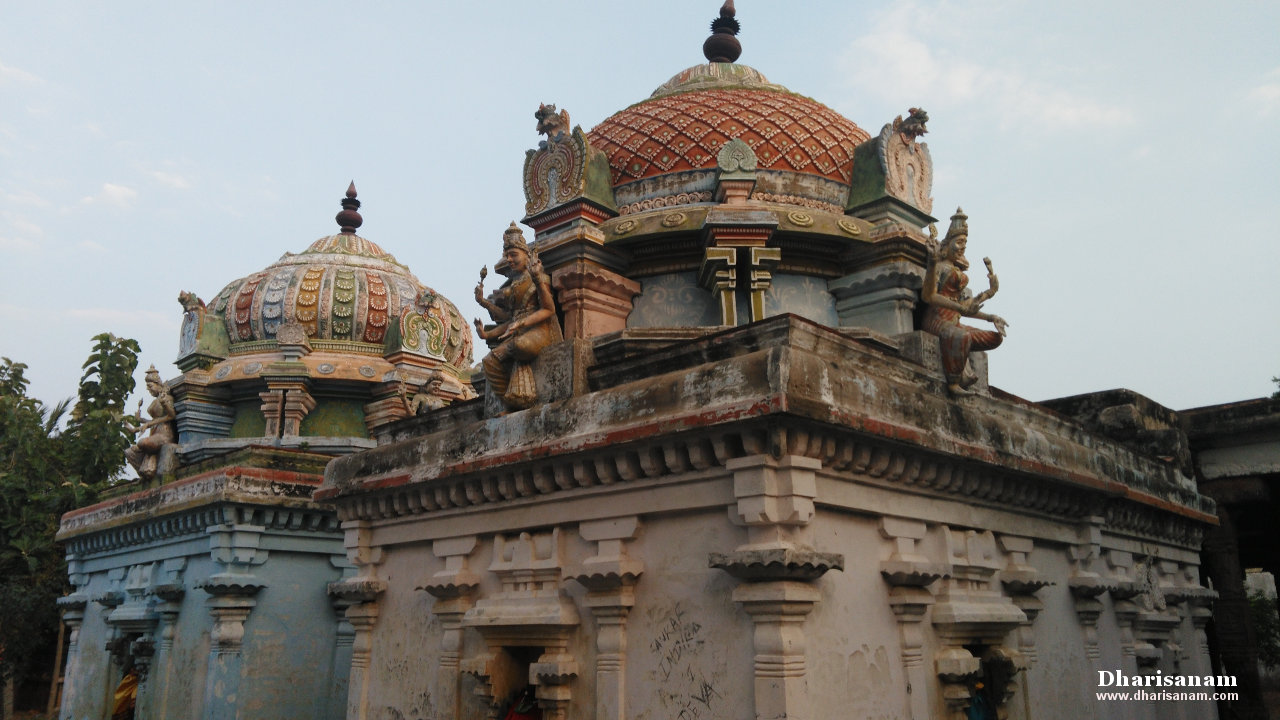 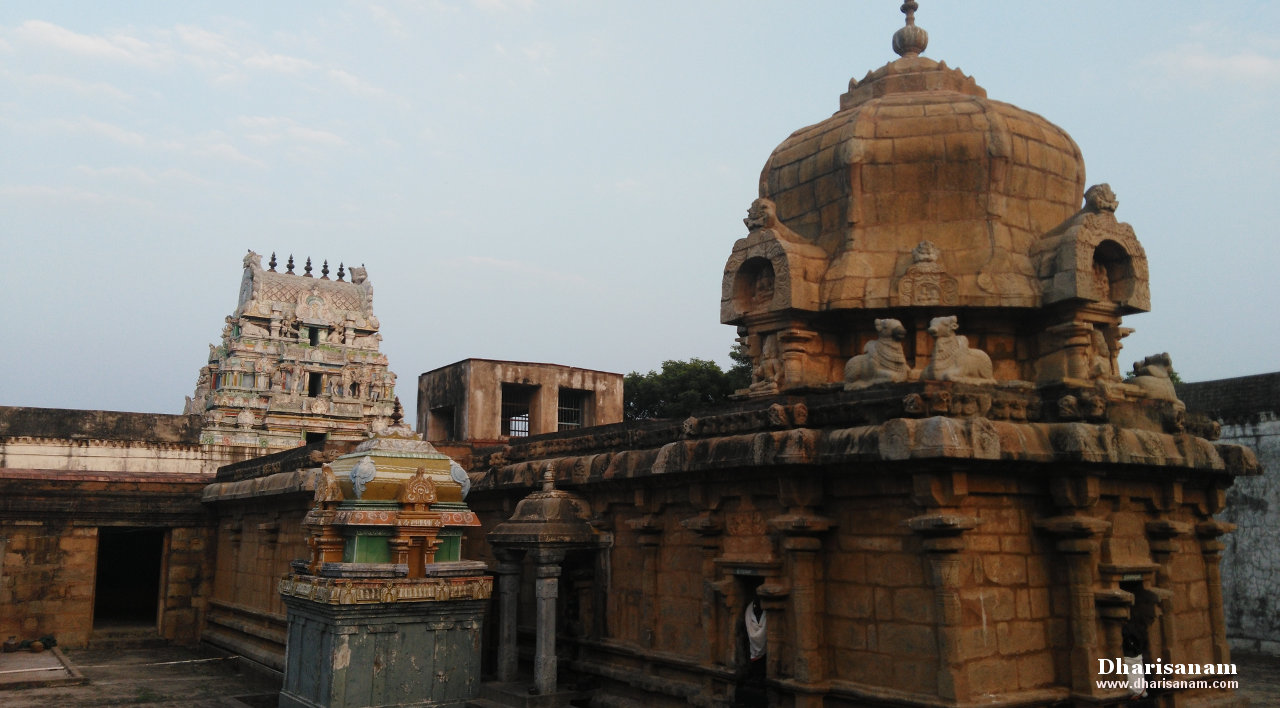