Thiruvalanchuzhi is situated at a distance of about 7 kms from Kumbakonam on the Kumbakonam to Tanjore route (via Papanasam). Nearest railway station is Swamimalai which is about a kilometre away.

This ancient temple is very huge and is housed in a sprawling 7.25 acre of land with 5 large halls (mandapams).

The historical names of this place are Shakti Vanam, Thirunaavartham and Dakshinaavartham.

There are certain stone inscriptions in this temple which date back to the periods of Chola kings Thiribhuvana Chakravarthy, Rajathirajan, Rajakesari Varman, Parakesari Varman, Vikraman and Rajendra Cholan. 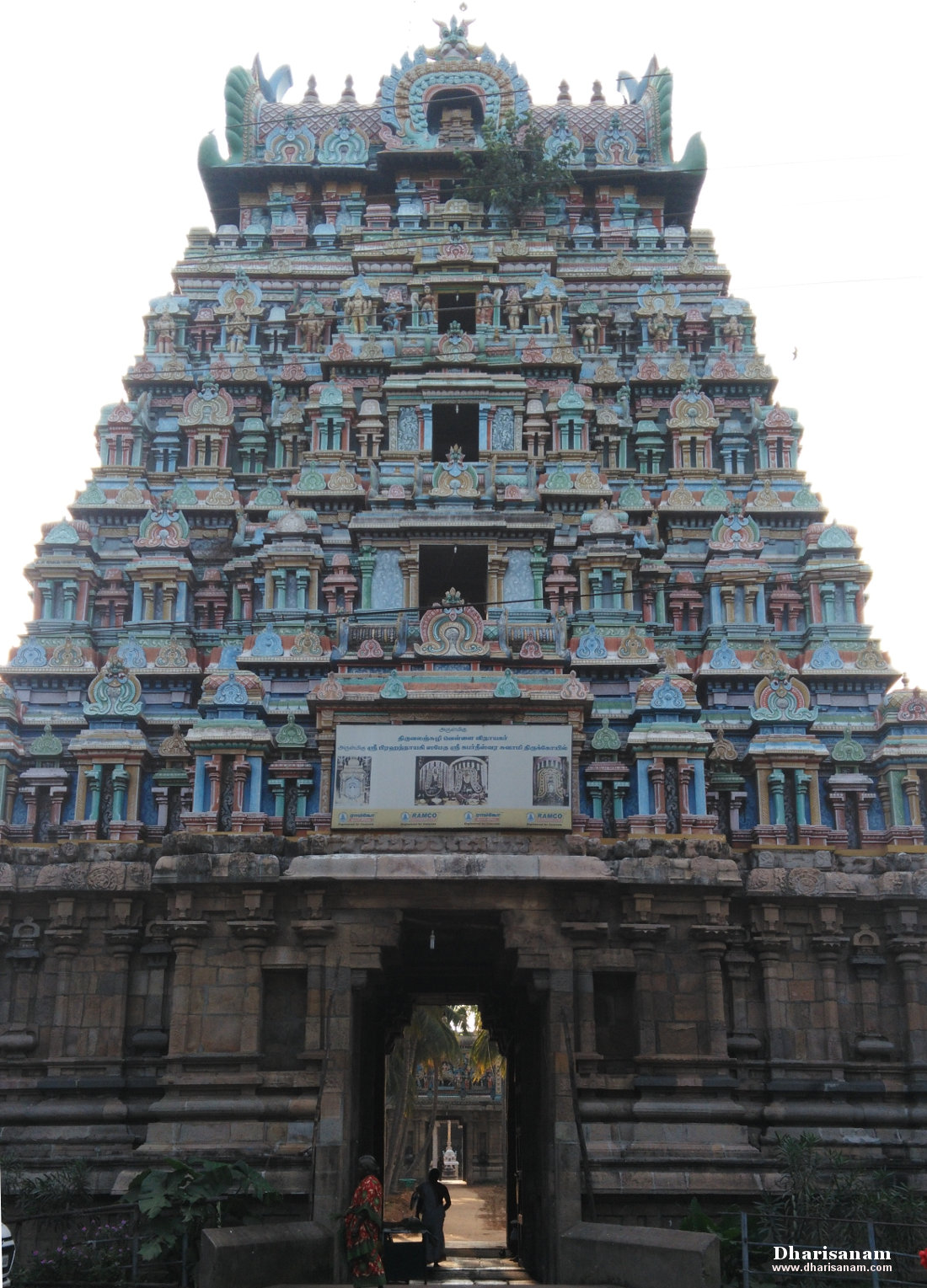 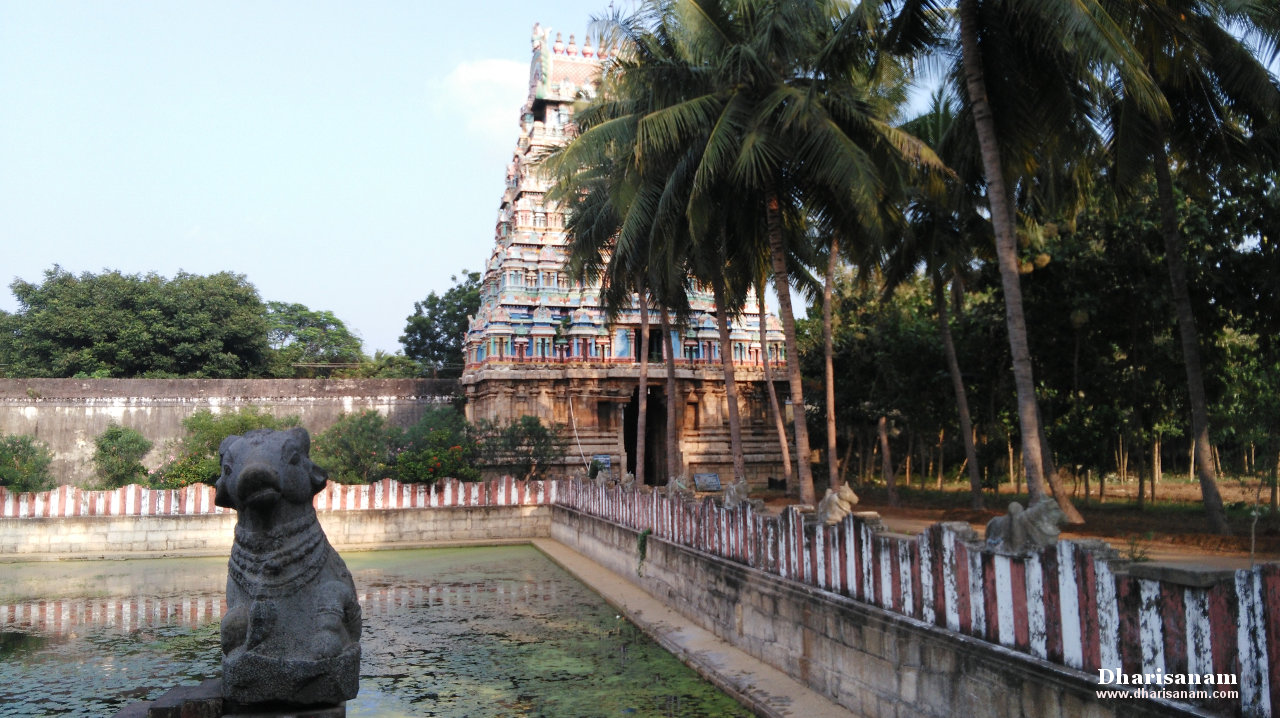 According to legend, the celestial gods (Devas) had created an idol of Lord Vinayakar out of the ocean foam to worship during the churning of Thirupparkadal for extracting nectar (Amritam). Indra, the king of Devas is believed to have had this idol in his possession. During his pilgrimage to this place, he placed this idol on the ground before proceeding to worship Lord Shiva. However, when he tried to take it back, he was unable to move it as it got rooted in the earth. Lord Indra decided to build a temple for the Vinayakar here itself. It is believed that even now he visits this temple to worship this Vinayakar on every Vinayaka Chaturthy day.

Since the Vinayakar is made out of foam, no abhishekam is performed but punugu (civet) is often applied. Also, raw camphor (“Pachai Karpuram”) powder is sprinkled on the idol without directly touching the idol. For this reason, this Vinayakar is considered a “Theendath Thirumeni” (untouched by human hands).

Another legend associated with this place is that of Heranda (Athreyar) Maharishi. Once, Aadhiseshan came out from the “Padhala logam” (underworld) on a Shivarathri day here to worship Lord Shiva. A huge hole (“phila dhwaram”) formed at the place where Aadhisheshan came out. River Cauvery was flowing through this place after making a circumambulation (“valam varuthal”) of this Shiva temple.  It is believed that she entered the hole created by Aadhisheshan and fell into the underworld.

The Chola king who ruled from Kumbakonam, Harithuvajan got worried about this and prayed to Lord Shiva. It is believed that at this point the lord’s divine voice was heard saying that a king or a sage has to sacrifice his life by entering into the hole so that the river can come back to earth. The king also sought the advice of Sage Heranda Maharishi who was performing penance in a place called Kottaiyur. The sage confirmed what the divine voice had said. When the king decided to get into the hole for the welfare of the people, the sage stopped him and he himself entered into the hole and brought Cauvery back to earth. The place where the river came back to earth is called “Mela Cauvery”. It is near Kumbakonam. Although he entered into the underworld in this place, it is believed that he came back to the earth in Thiruvalampuram (Mela Perumpallam). He worshiped the lord there for some time and attained salvation.

Since river Cauvery was flowing through this place but suddenly changed its direction, this place gets the name “Thiru Valam Chuzhi”.

Other than the shrines of Lord Shiva and Goddess Parvathy, shrines and idols of Vinayakar, Murugan, Natarajar, Somaskandar, Mahavishnu, Gajalakshmi, Sri Thapas Nachiyar, Brahma lingam, Suryan, Chandran, Viswanathar with Visalakshi along with few Nagars, Irattai Vinayakar and Durgai with Saptamadas can be seen in the corridors.

Goddess Brahannayaki (Periyanayaki) graces from a separate temple that is located towards the right side of Lord Shiva’s shrine. 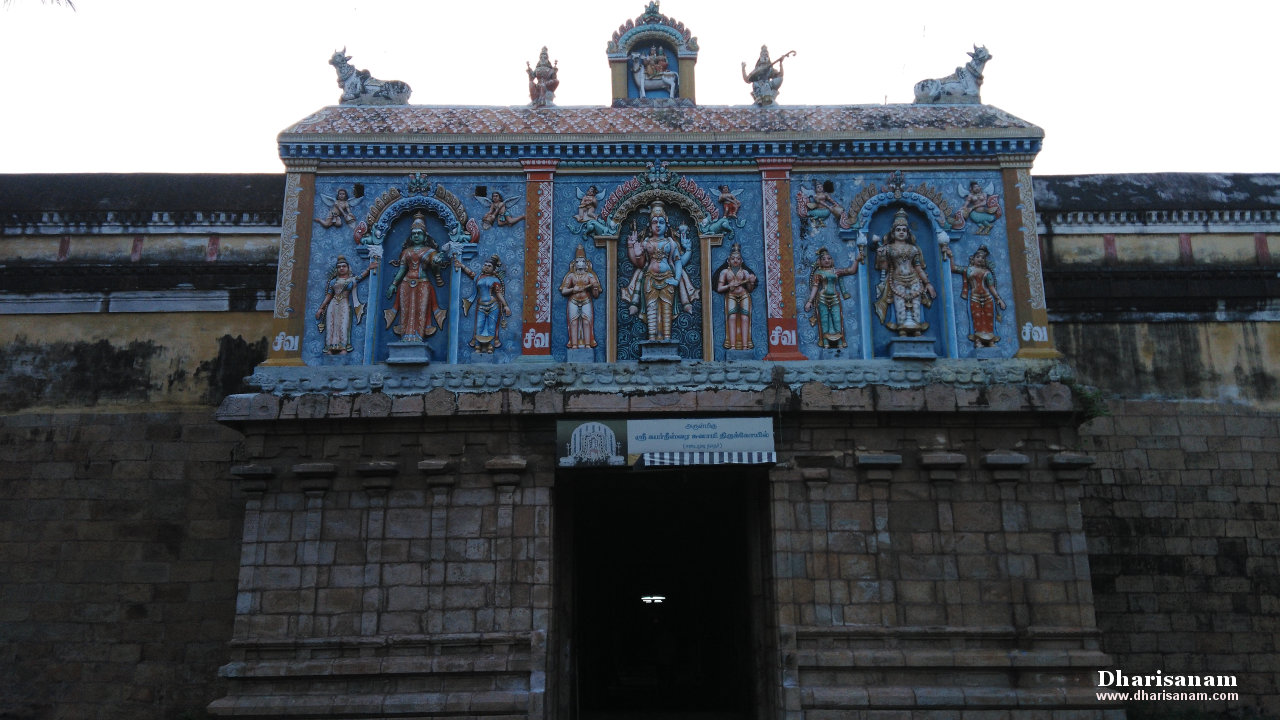 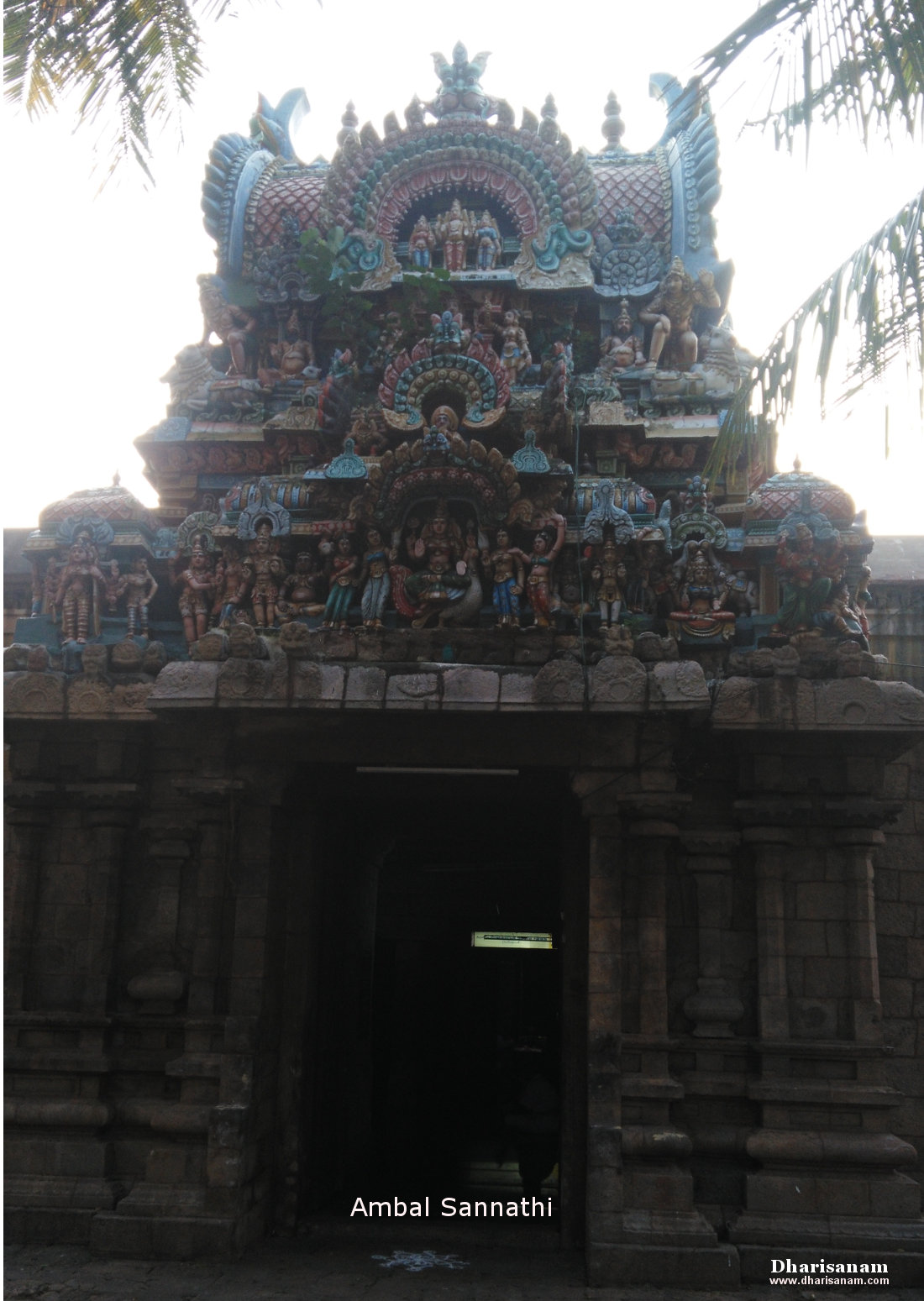 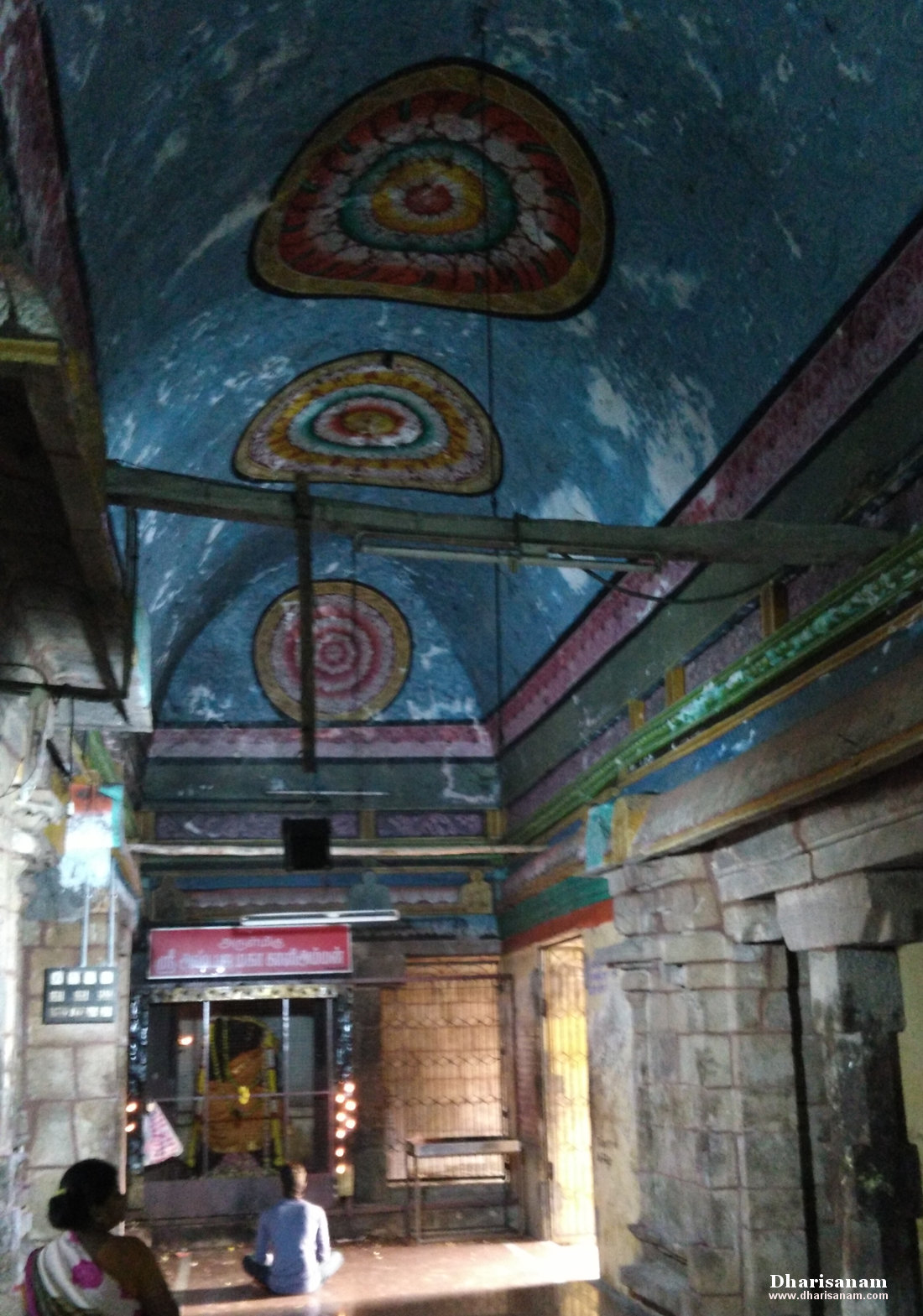 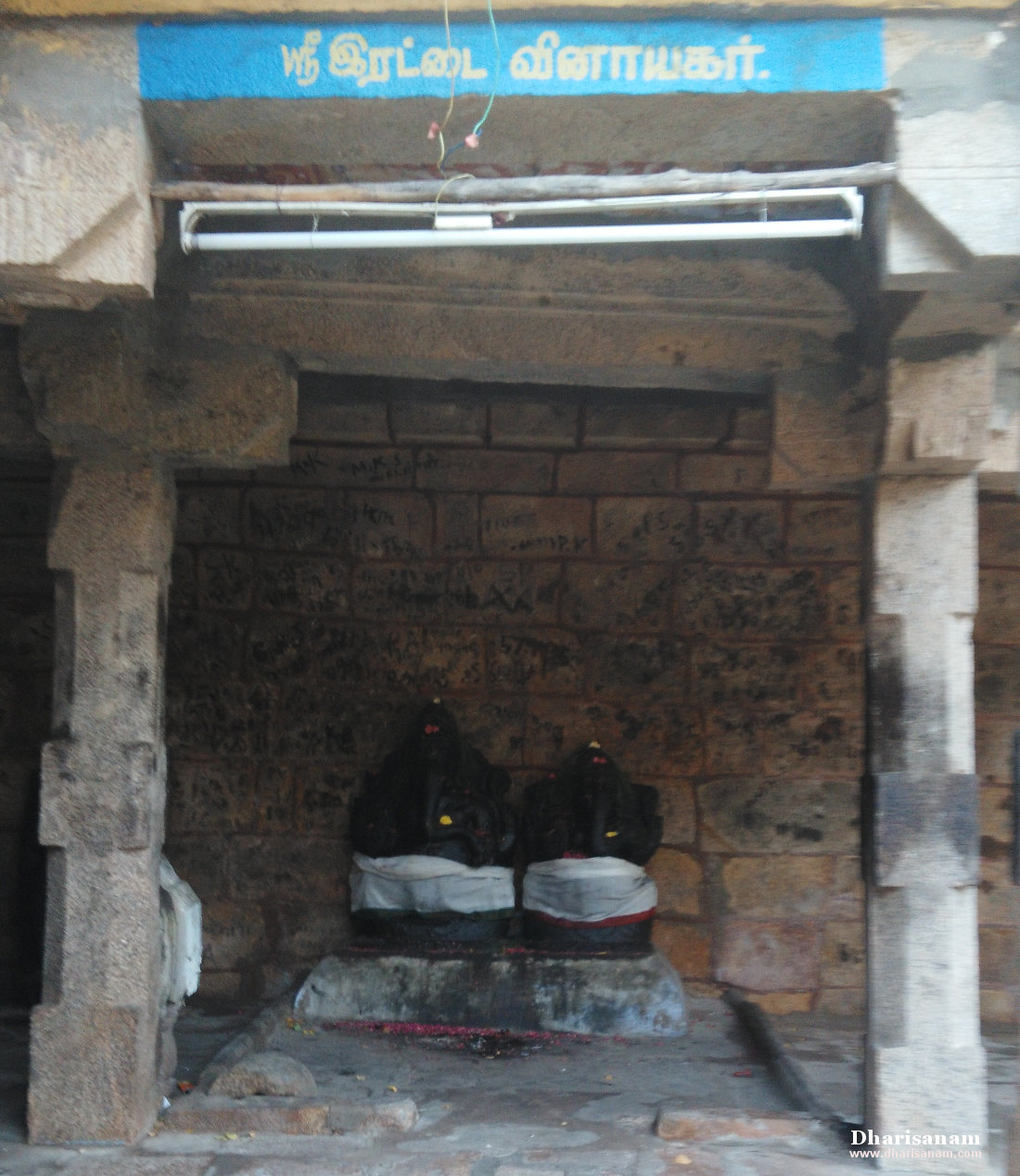 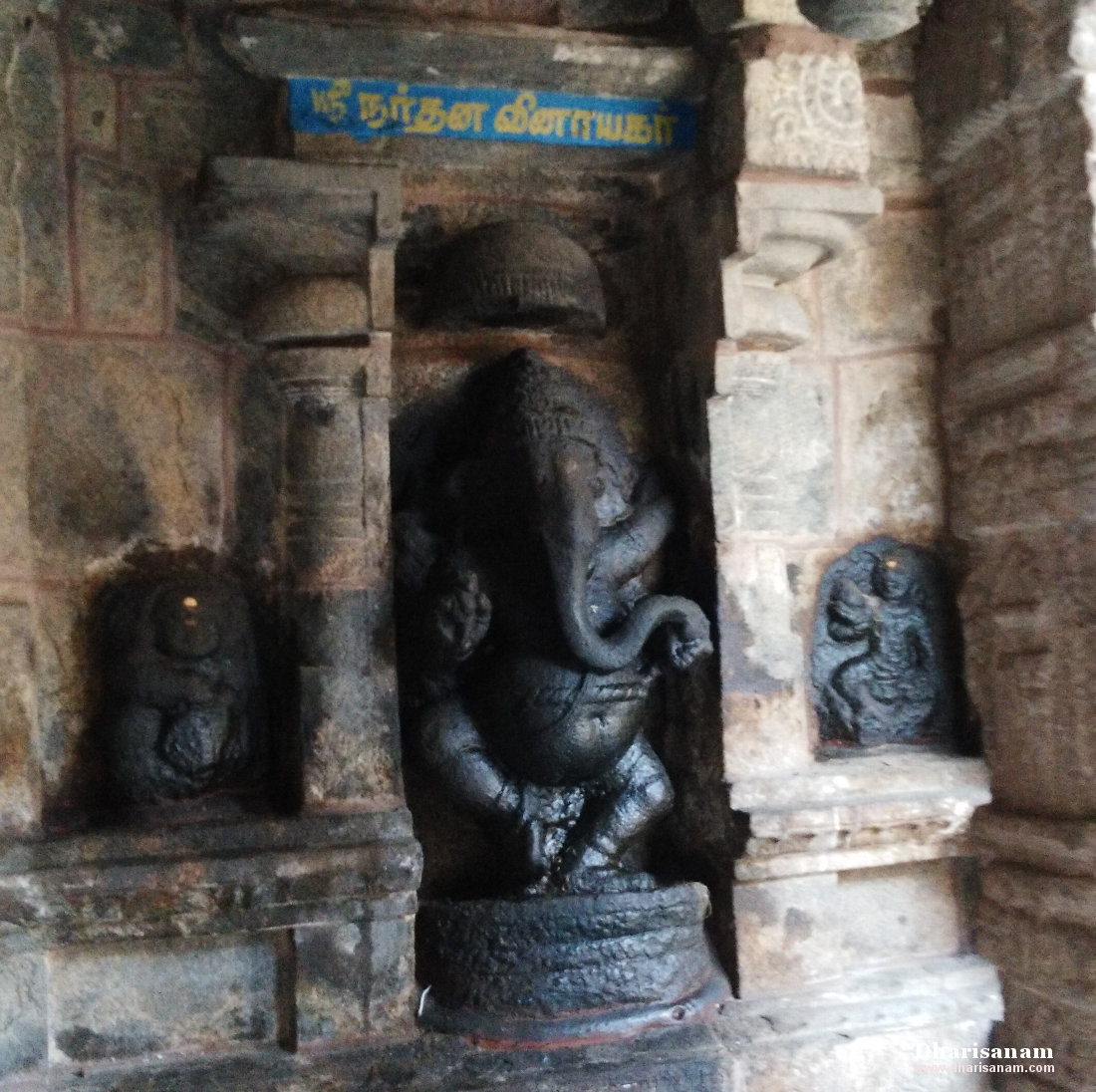 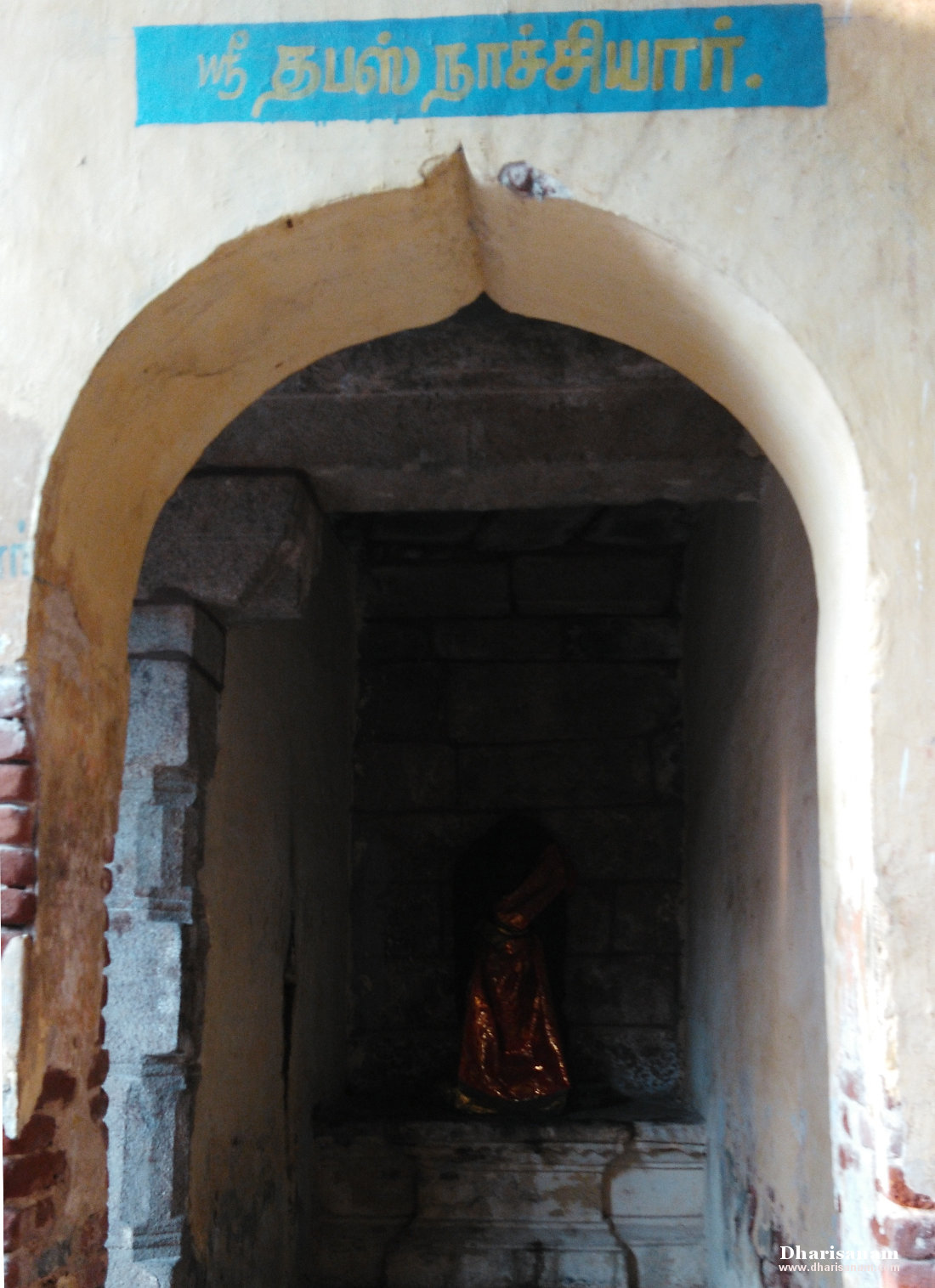 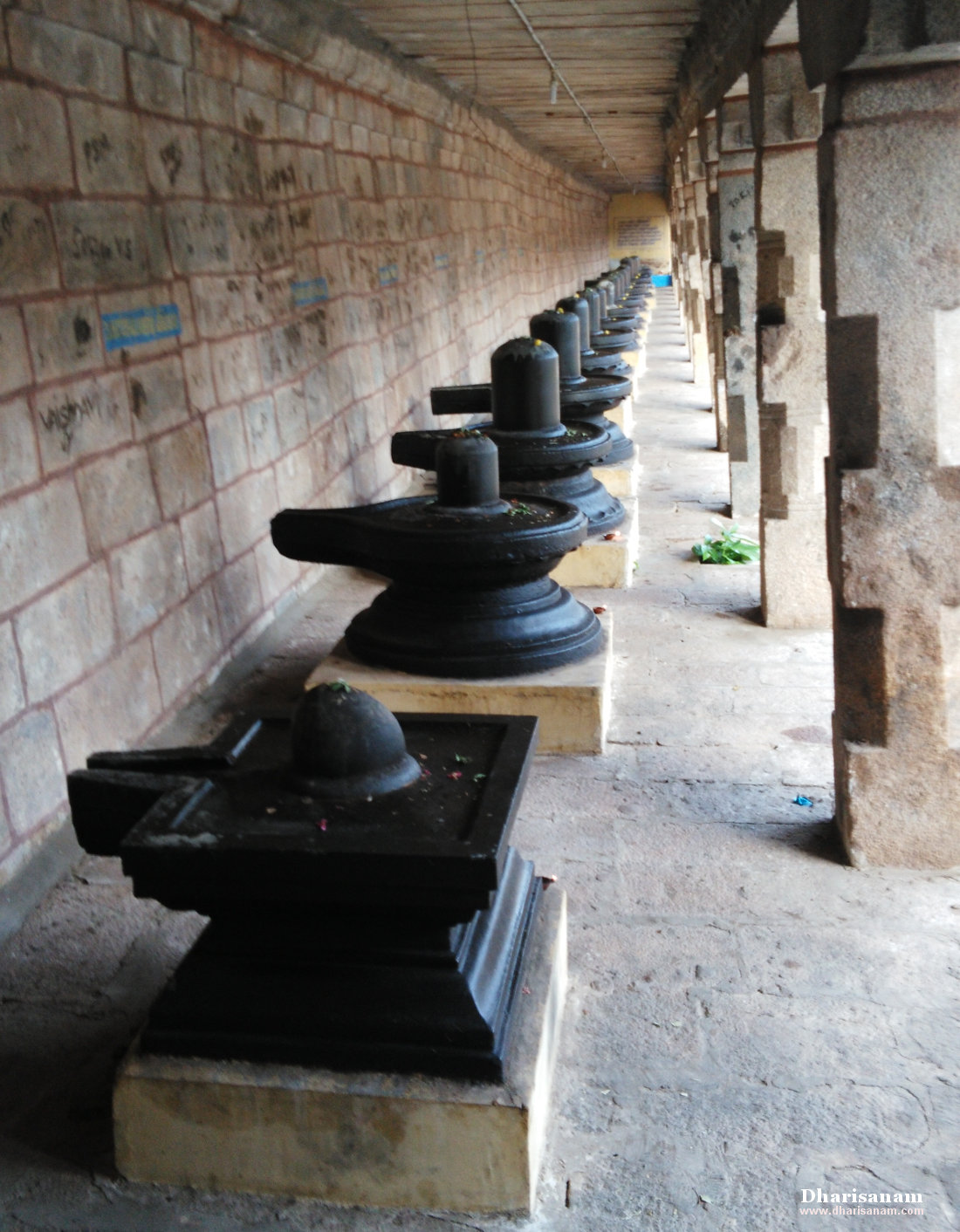 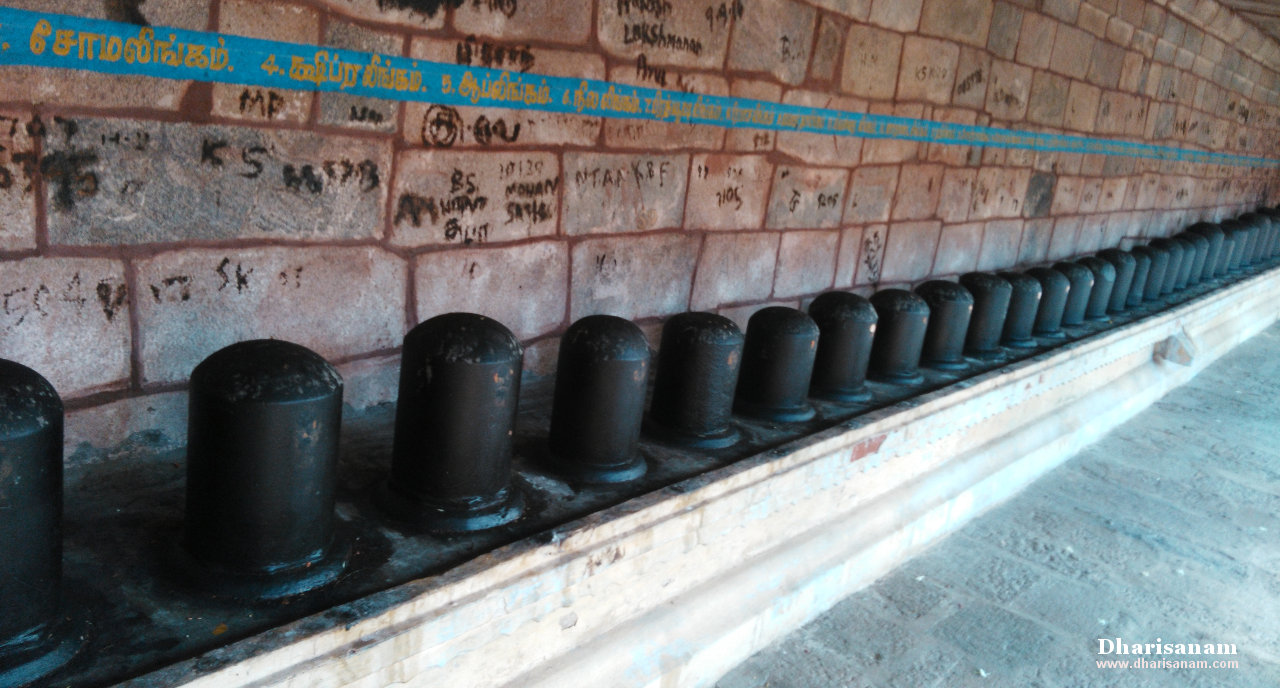 In his hymn, Saint Thirugnanasambanthar mentions that one must have performed many good deeds before getting the opportunity to visit this temple and worship Lord Shiva here.

The front hall (mandapam) housing the Vellai Vinayakar is believed to have been created by Lord Indra. It is filled with many artistic pillars with intricate carvings. Three 6-feet high stone lamps and a huge grilled window made from a single stone are placed in front of this Vinayakar. These are some of the unique features of this temple. 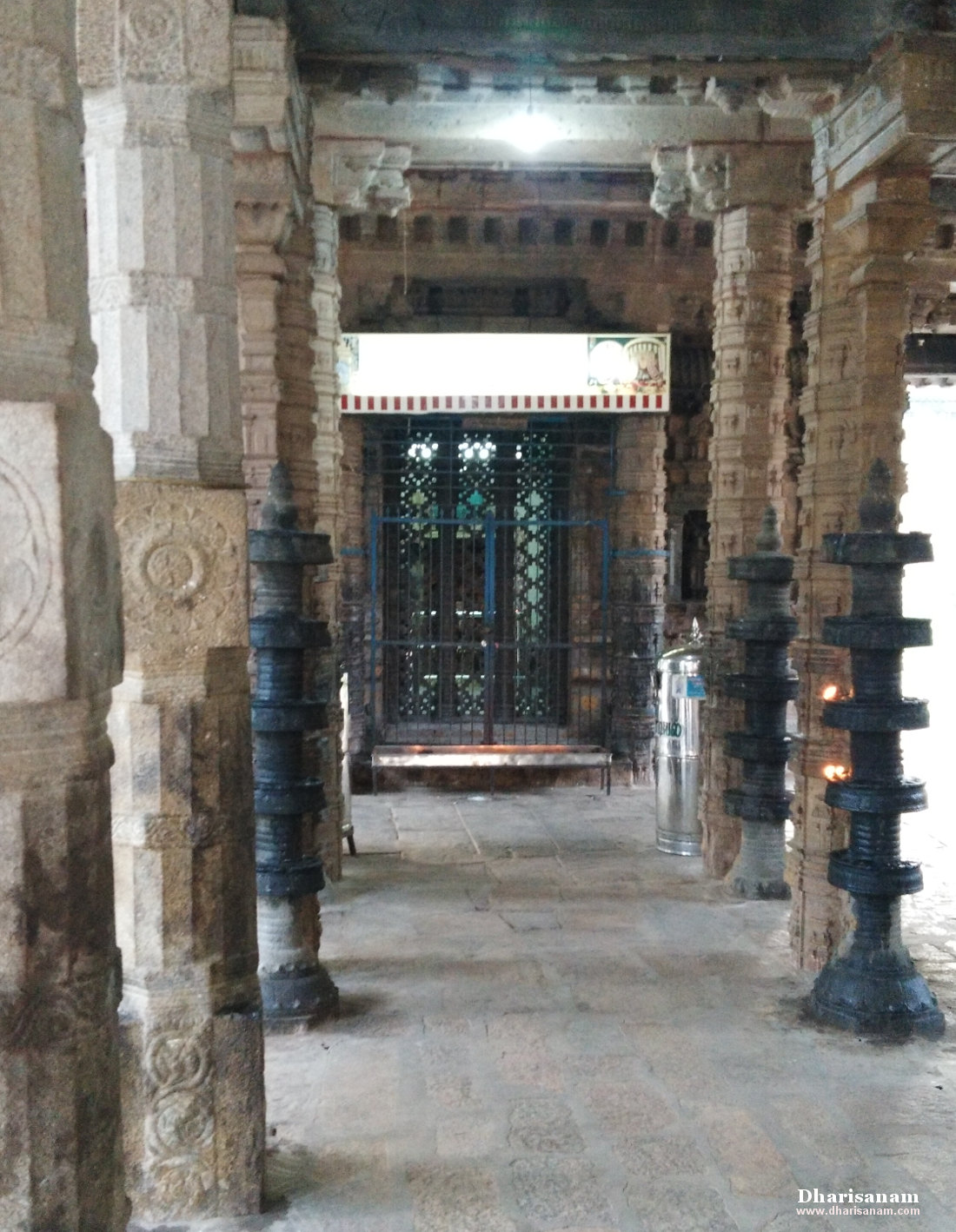 This temple is known more for the Vinayakar than the main deity.

There are two shrines of Lord Murugan here. In one shrine, Lord Murugan is depicted with six faces, 12 hands, seated on his peacock mount and is with his consorts. In the second shrine, he is praised as Lord Subramanyar and is depicted in his human form.

The sculptures depicting the cosmic dance of Lord Shiva and the images of celestial nymphs display exquisite craftsmanship. These were created under the patronage of Nayakkars.

As per the “Maruthavana Puraanam”, Sri Mahalingaswamy temple at Thiruvidaimaruthur has 9 other temples associated (“Parivaara sthalams”) with it. Thiruvalanchuzhi is one of them and is considered to represent Lord Vinayakar. These 9 temples along with the deities that they represent are –

Devotees also believe that worshiping Lord Shiva here will lead to removal of sins from their previous birth. 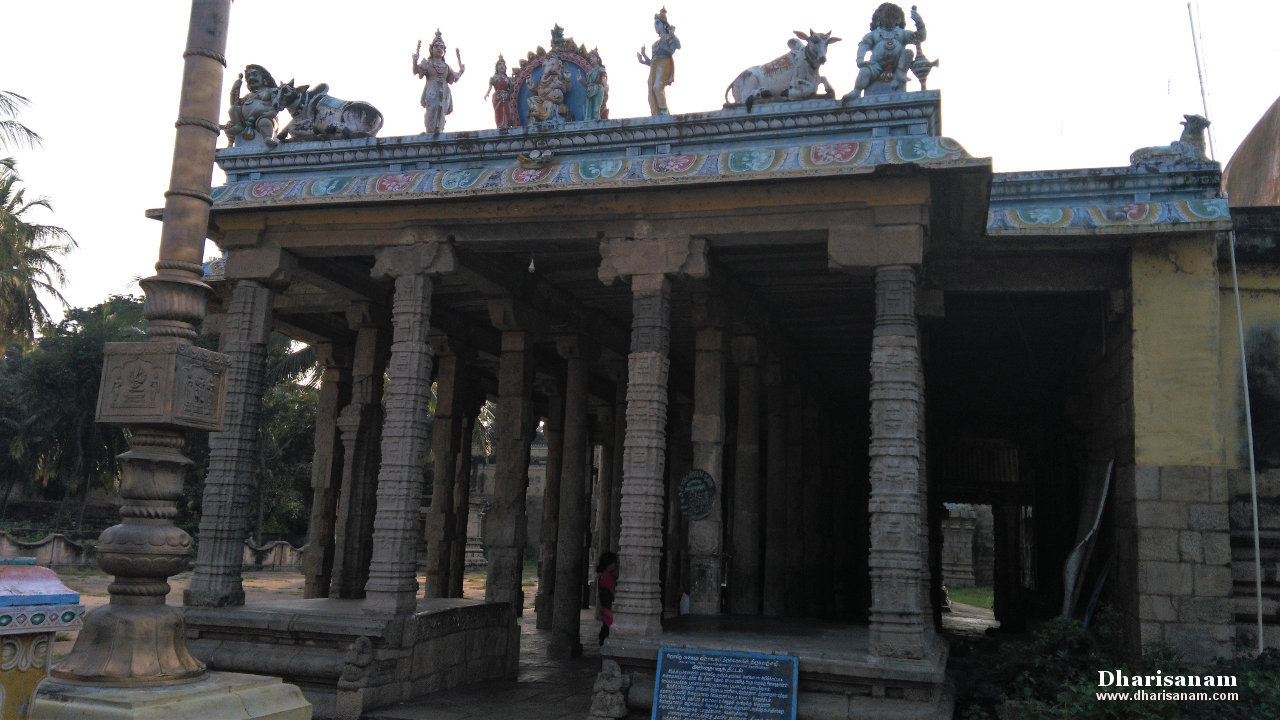 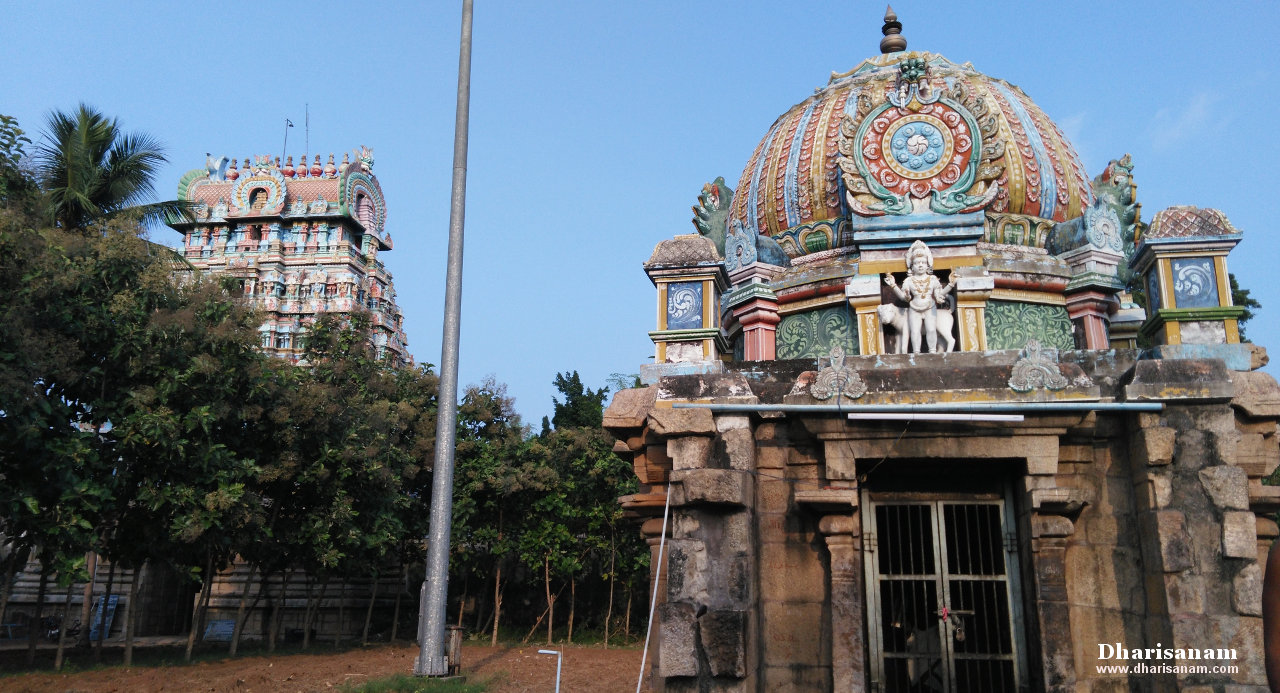 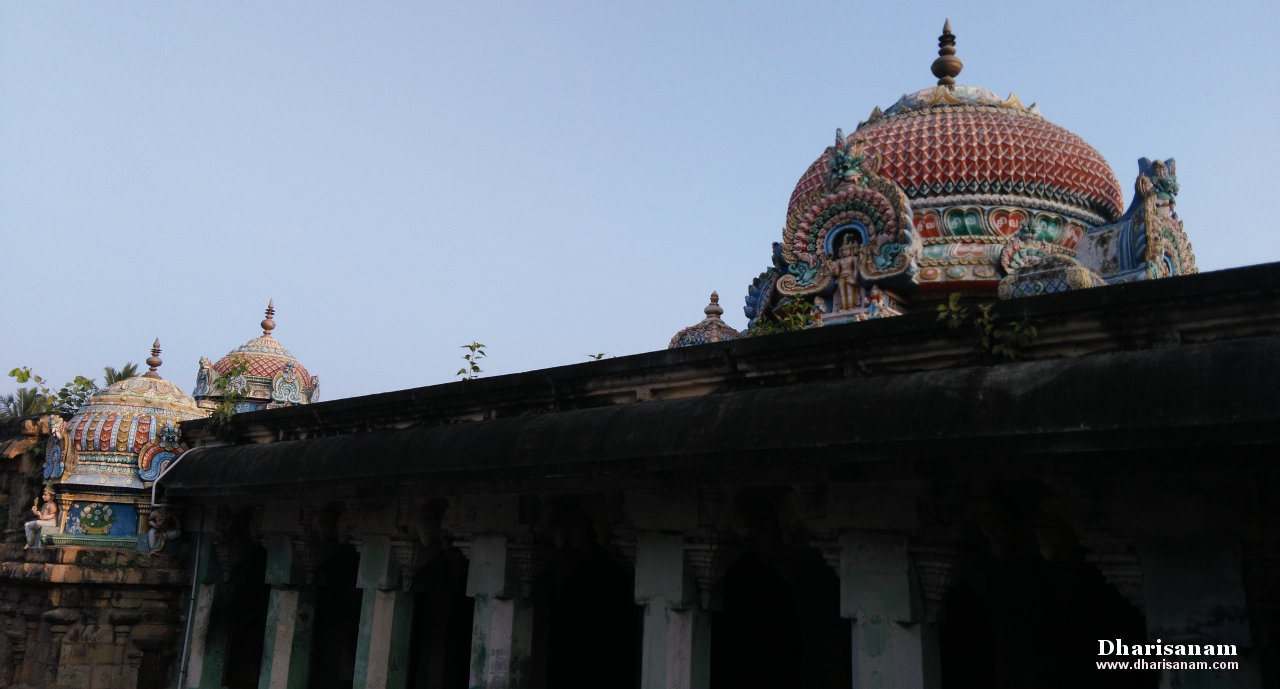 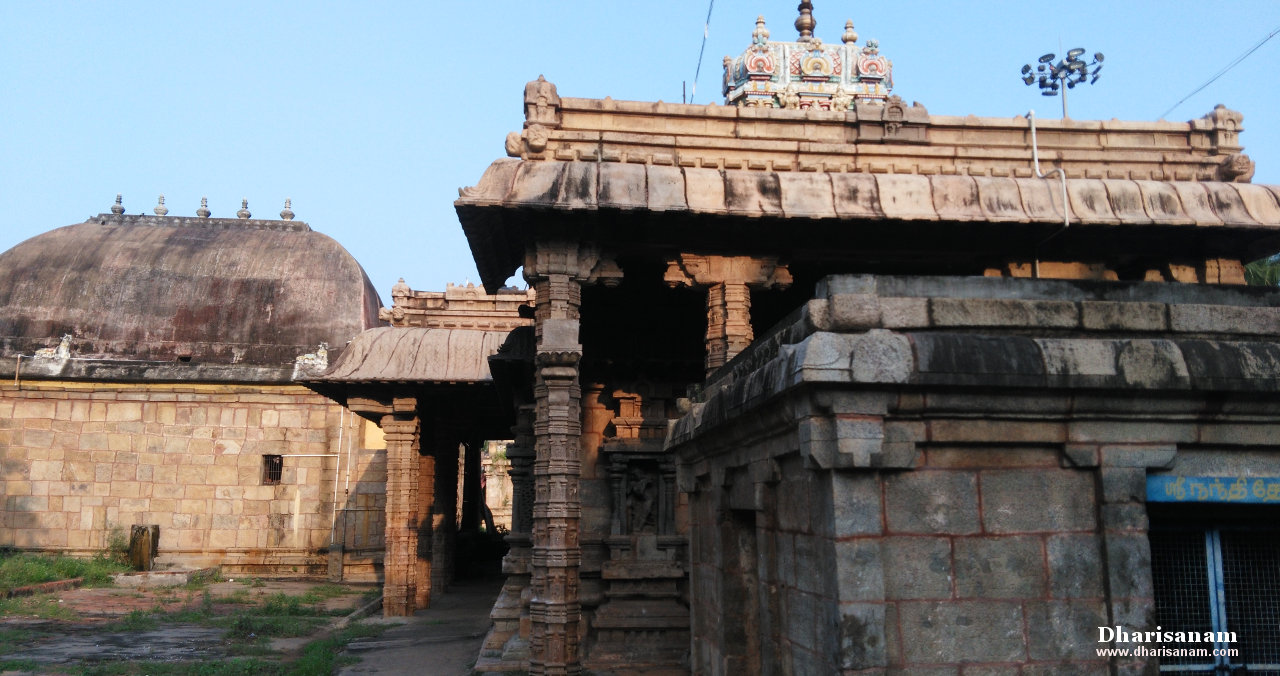