Thiru Nallur is situated at a distance of about 15 kms from Kumbakonam on the Kumbakonam – Papanasam – Tanjore route. After Sundara Perumal Koil, take the diversion road at Uthani village and proceed further for about 2 kms to reach Nallur. From Papanasam (via Vazhappazhakkadai) Nallur is about 5 kms.

Nearest railway station is Sundaraperumal Koil (3 kms) on the Kumbakonam to Tanjore line.

As per Hindu mythology, Adisheshan (the serpent on whom Sri Mahavishnu rests) and Vayu (lord of the winds) fought among themselves frequently to test their superiority. During one such struggle, against Vayu’s severe wind, Adhiseshan failed to hold on to the Mount Meru.  In this process, two peaks of the mountain were dislocated and fell onto the earth, one at this place (Nallur) and the other at Aavoor, a nearby village. The Shivalingam here is believed to have formed from the mountain peak that fell here.

There are 23 stone inscriptions in this temple which mostly date back to the periods of Chola kings – Uthama Chola, Raja Raja Chola and Rajendra Chola. A few inscriptions belong to the Hoysala and Vijayanagara empires.

This temple is under the administrative control of Thiruvavaduthurai Aadheenam since the early part of the 13th century. 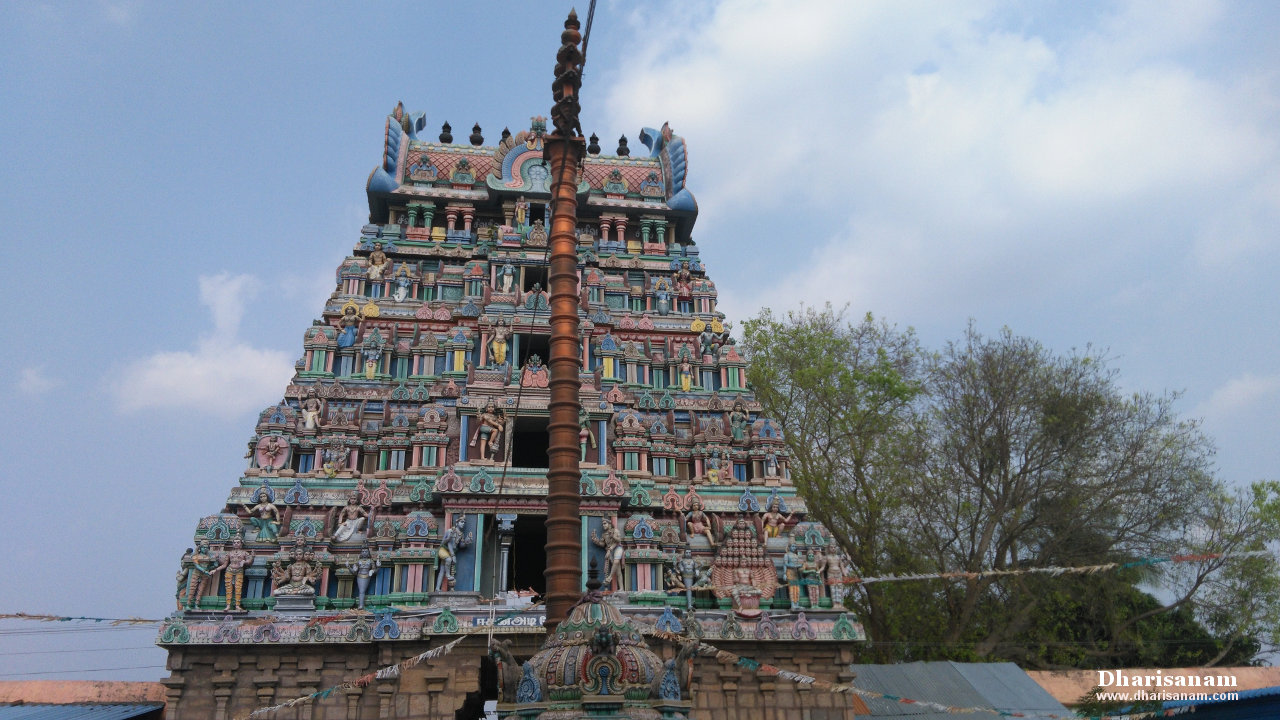 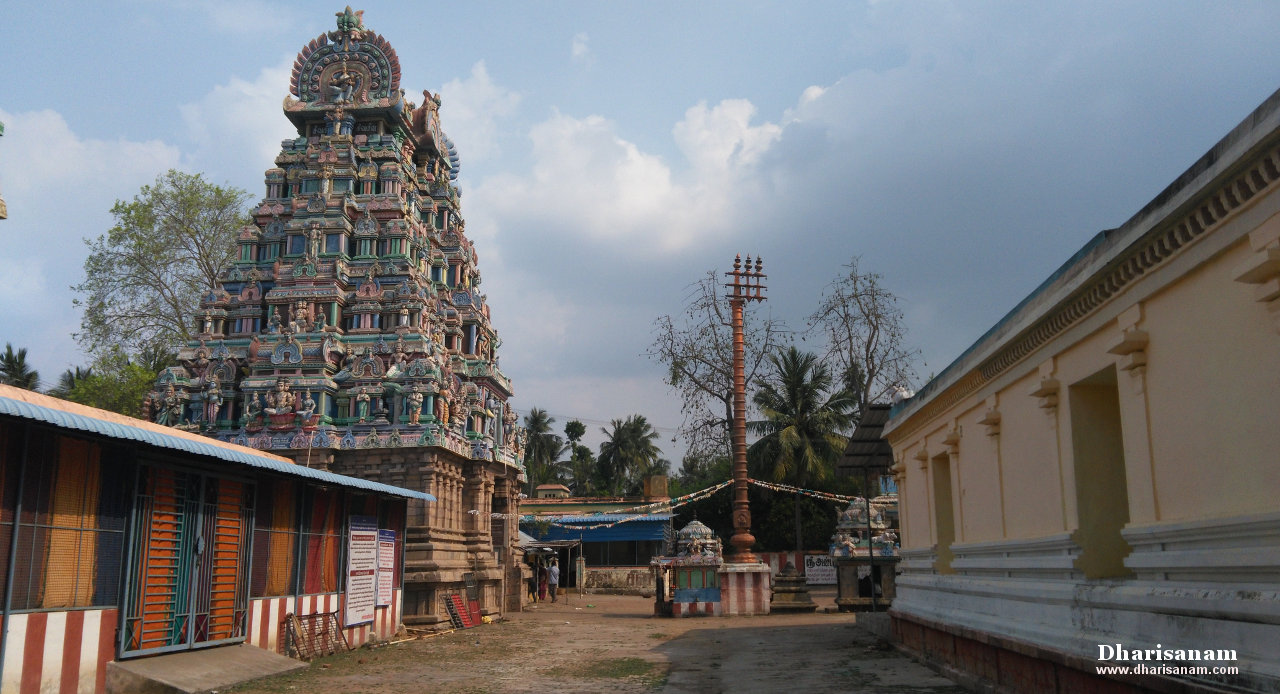 According to legend, when Saint Thirunavukkarasar was at a nearby village called Shakthi Mutham, he pleaded to Lord Shiva that he be blessed with the lord’s “thiruvadi deeksha”. Lord Shiva advised the saint to come to Nallur (this temple) to get this “deeksha”.  It is believed that Lord Shiva gave the thiruvadi deeksha to Saint Thirunavukkarasar here by placing his feet on the saint’s head. A unique tradition in this temple is that similar to Vaishnava temple, “sadaari” (lord’s foot) is placed on the heads of devotees as a form of blessing.

In his hymn, Saint Thirunavukkarasar referred to this place as “vadapal kayilaiyum, thenpal Nallurum tham vazhpathiye” (It is significant to note that Nallur is described as South Kailash). In his hymn, he also mentions about thiruvadi deeksha. 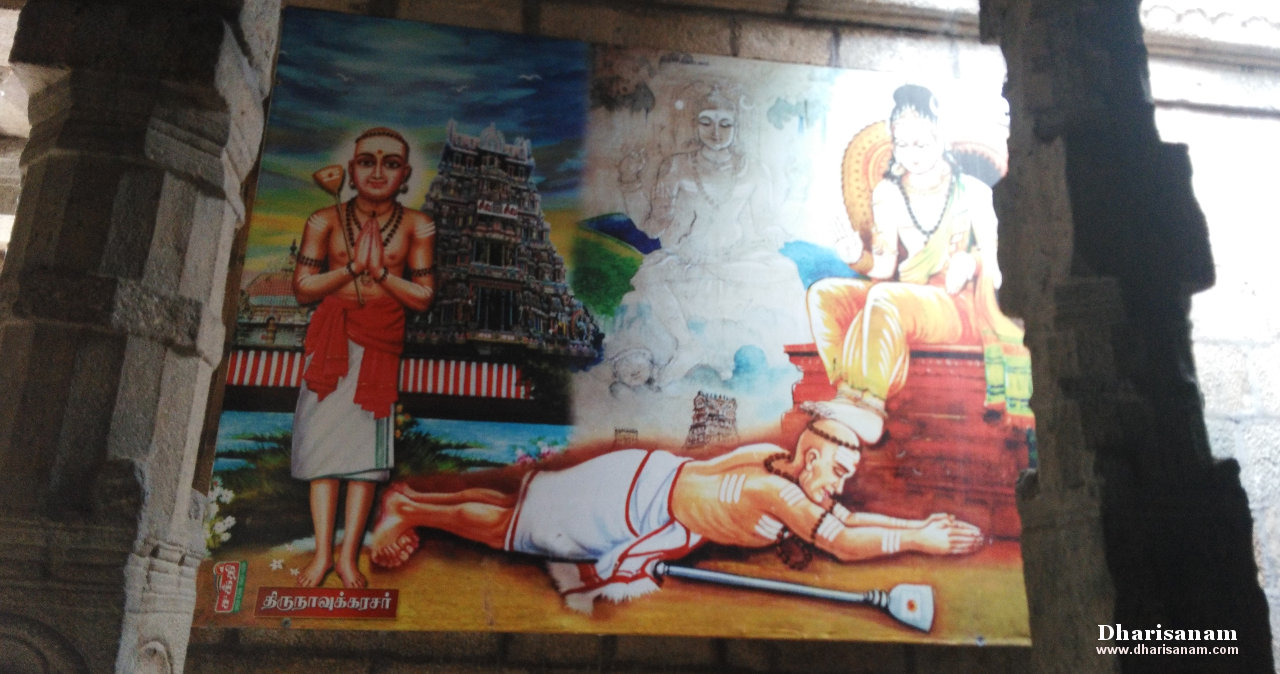 Another legend associated with this place is that of Amaraneethi Nayanar. He is one of the 63 Nayanmars. He lived in this place and attained salvation. He belonged to Pazhaiyaarai, a nearby village and later migrated to this place due to his immense devotion towards the lord of this temple.  He was a trader in gold, diamonds, silks and cotton goods. Though he was engaged in worldly activities, he was an ardent Shiva devotee. Every day he would invite Shiva devotees to his house to worship and feed them. He was also extremely generous and would also give them clothes as gifts.

Lord Shiva wanted to test the extend of Amaraneedi Nayanar’s generosity. He also wanted to show the Nayanar’s greatness to the world. One day Lord Shiva visited him in the form of a young brahmin boy and praised his noble activities. The Nayanar requested the boy to take food in his house to which the boy agreed. The boy told him that he wanted to take a bath in the river. Since it was raining, he handed over his clothes to keep them dry. When he returned from the river and asked for his clothes, the Nayanar was unable to return them as they had magically disappeared. The Nayanar gave him a new set of garments as replacement but the boy was not ready to accept anything other than his own clothes.

The boy then demanded equal weight in gold for his lost clothes. One by one, Amaraneethi Nayanar started depositing all his wealth on one pan of the scale, but no amount of gold was able to balance it. Finally, he submitted himself, his wife and his son and prayed to Lord Shiva to save him. Lord Shiva was pleased by his devotion and blessed the three with salvation.

Idols of the Nayanar and his wife can be seen in the hall. There are both stone idols as well as metal procession idols. The “Thula Mandapam” (hall) where he weighed himself in a balance, can still be seen. 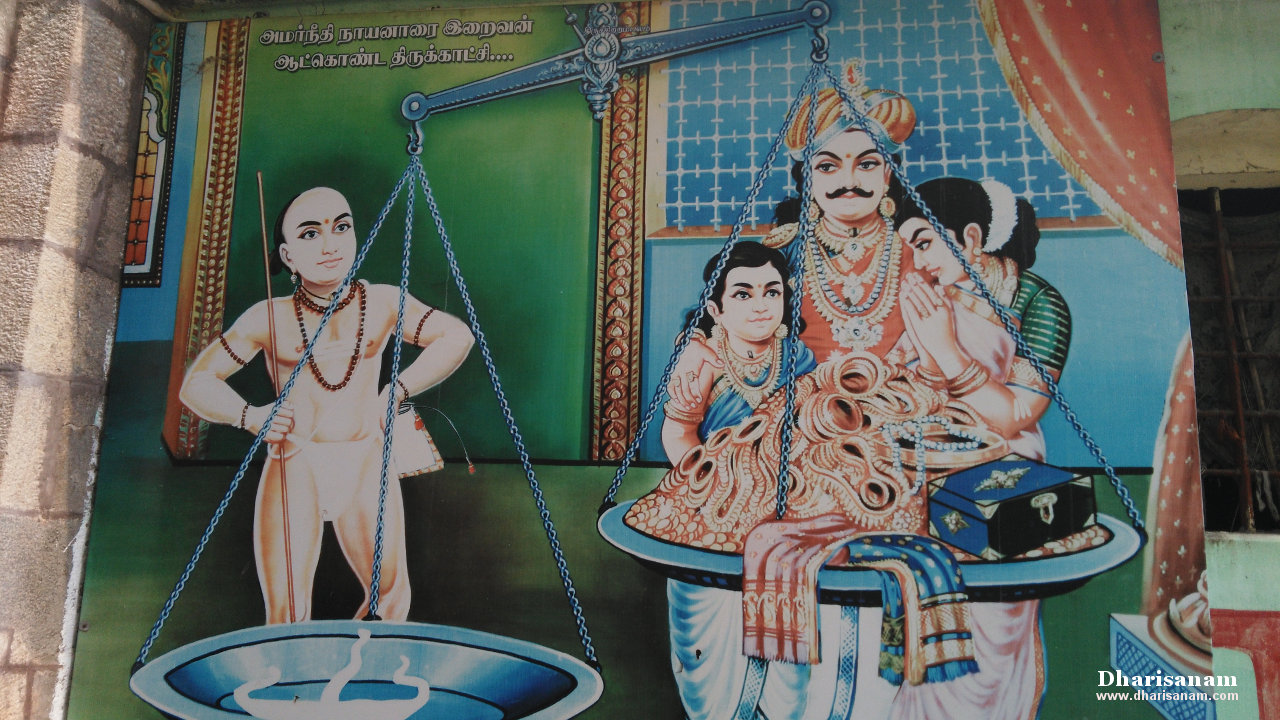 Another legend associated with this temple is that of Kunti Devi, from the Mahabaratha period. She is the wife of King Pandu and the mother of the Pandavas.  Kunti had committed a sin by having a child before her marriage. She then put this infant in a basket and set him afloat in a river. This child grew up to be known as Karna. After this act, a repentant Kunti sought the advice of Sage Naradha. The sage said that she would be absolved of the sin if she takes bath in the waters of all the seven oceans on a Maasi Maham star day. A flabbergasted Kunti wondered how this could be possible. The Sage then told her to come to this place. Following the advice, she reached this place and prayed to Lord Shiva. Lord Shiva instructed all the seven seas to come to this temple’s tank to enable Kunti to take a dip. She took a dip in this Theertham and was absolved of her sin. This tank is known as “Sapthasahara Theertham”. There is a beautiful relief in this temple depicting Kunti performing pooja to Lord Shiva. 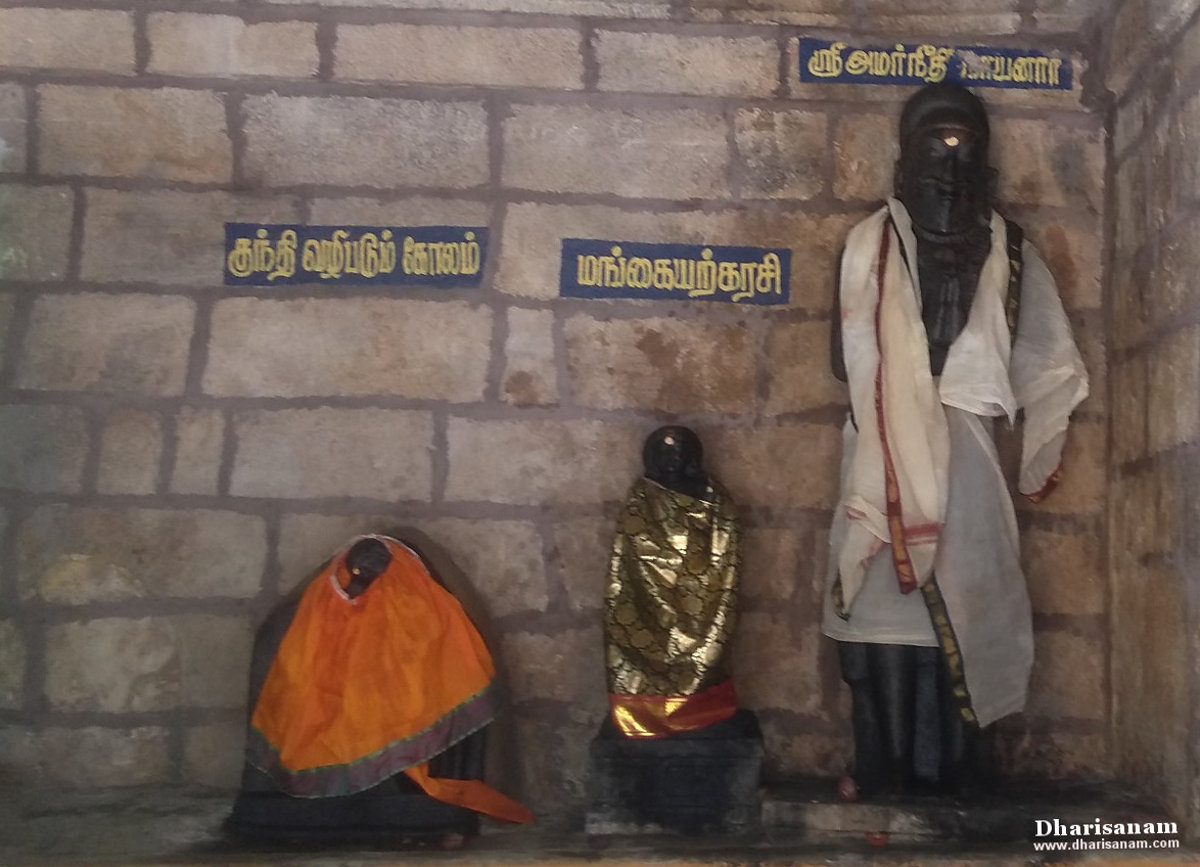 Another legend associated with this temple is that of Sage Agasthiyar. When the marriage of Lord Shiva and Goddess Parvati took place, everybody went to Mount Kailash to attend the marriage. This created an imbalance and the earth tilted to one side. In order to maintain balance, Lord Shiva asked Sage Agasthiyar to go to the southern end. However, Sage Agasthiyar was disappointed that he could not witness the lord’s wedding. Understanding the sage’s concern, Lord Shiva told him that he would be blessed with the wedding darshan whenever he wished to see it. Nallur is one such place where Lord Shiva gave his wedding darshan to the sage.

At this temple, Sage Agasthiyar consecrated another small lingam besides the existing one and performed pooja. This small lingam is known as “Agasthiyar lingam”. Hence there are two Shiva lingams on a single base (avudaiyar). This is a unique feature of this temple. Lord Shiva was pleased with Sage Agasthiyar’s devotion and appeared before him with his wedding form (“Kalyana Kolam”).

Behind the Lingam in the sanctum (“garbagraham”), there is a sculpture of Lord Shiva and Goddess Parvathi in a seated posture. An interesting feature is that lords Shiva, Vishnu and Brahma are present in the same sanctum. Brahma is seen standing to Shiva’s right and performing the marriage rites, while Vishnu is seen standing to Shiva’s left. Sage Agasthiyar can be seen worshiping the lord.

Another legend is that Sage Brinki, an ardent devotee of Lord Shiva, was not willing to worship the Goddess Parvathy. Hence, he took the form of a “vandu” (bee) and worshipped Lord Shiva alone by flying around him. Similar to a bee hive, there are a few small holes on this Shivalingam.

It is also believed that Emperor Musukundha Chakravarthi was presented with seven idols of Lord Thiyagarajar by Lord Indra. While taking them back to his kingdom, the emperor stayed here for three days and worshiped Lord Shiva. This emperor belongs to the “Dwapara Yuga”, the third of the four yugas.

It is believed that Vayu, Sage Agasthiyar, Sage Birunki, Sage Kaka Bhujandar, Kunti, Musukunda Chakravarthy andSaints Thirugnanasambanthar and Appar have worshiped the lord here. It is also believed that this lord was once worshiped by a lion.

In the “koshtam” (place surrounding the sanctum sanctorum), idols of Narthana Vinayakar, Dakshinamurthy, Lingothbavar, Brahma, Vishnu Durgai and Chandikeswarar can be seen.

Ashtapuja Kaali (with 8 hands) is housed in the south corridor of this temple. This Kaali is very popular among women devotees, especially pregnant women. They conduct their bangle wearing ceremony here during their pregnancy and pray for an easy and safe delivery. 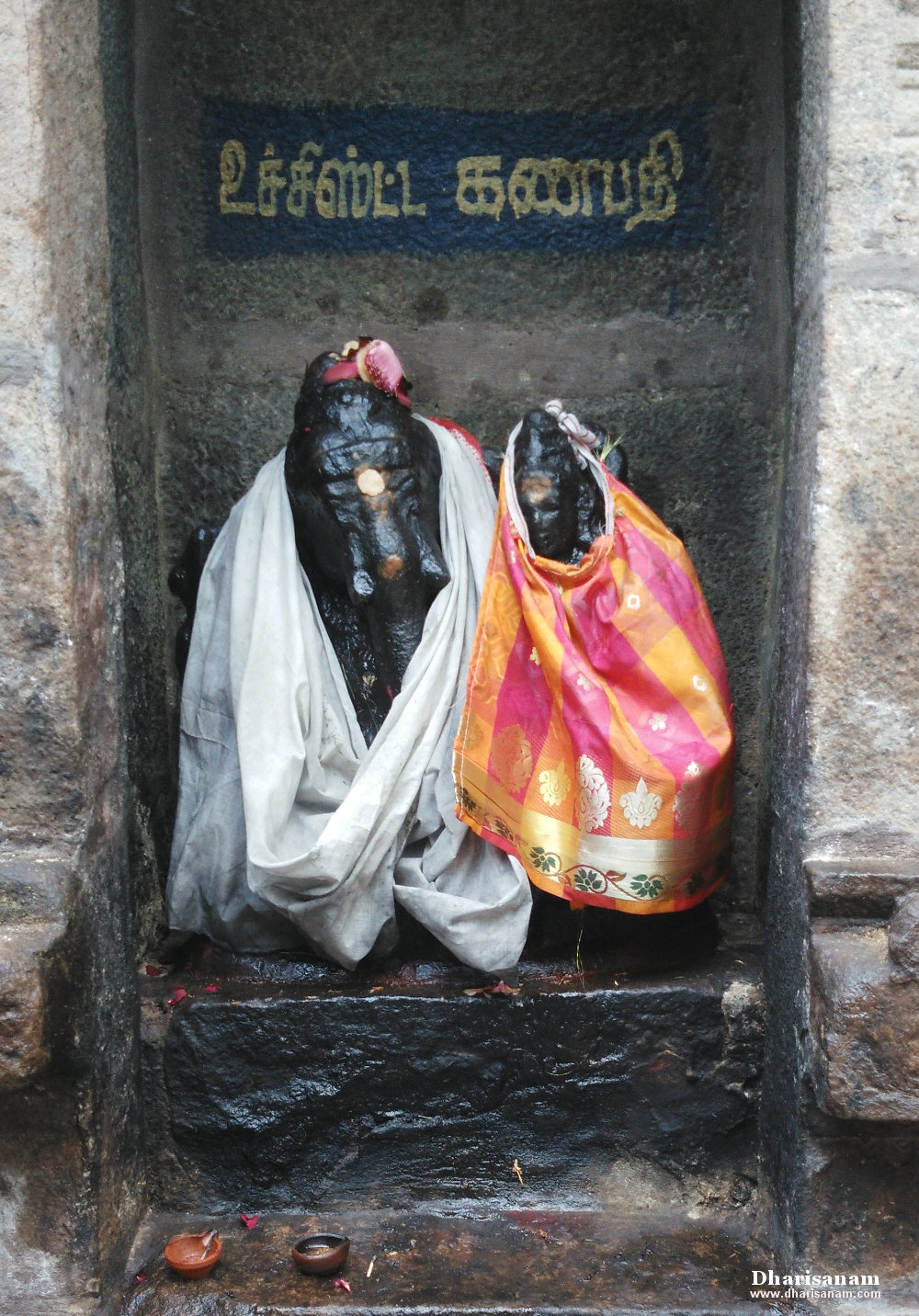 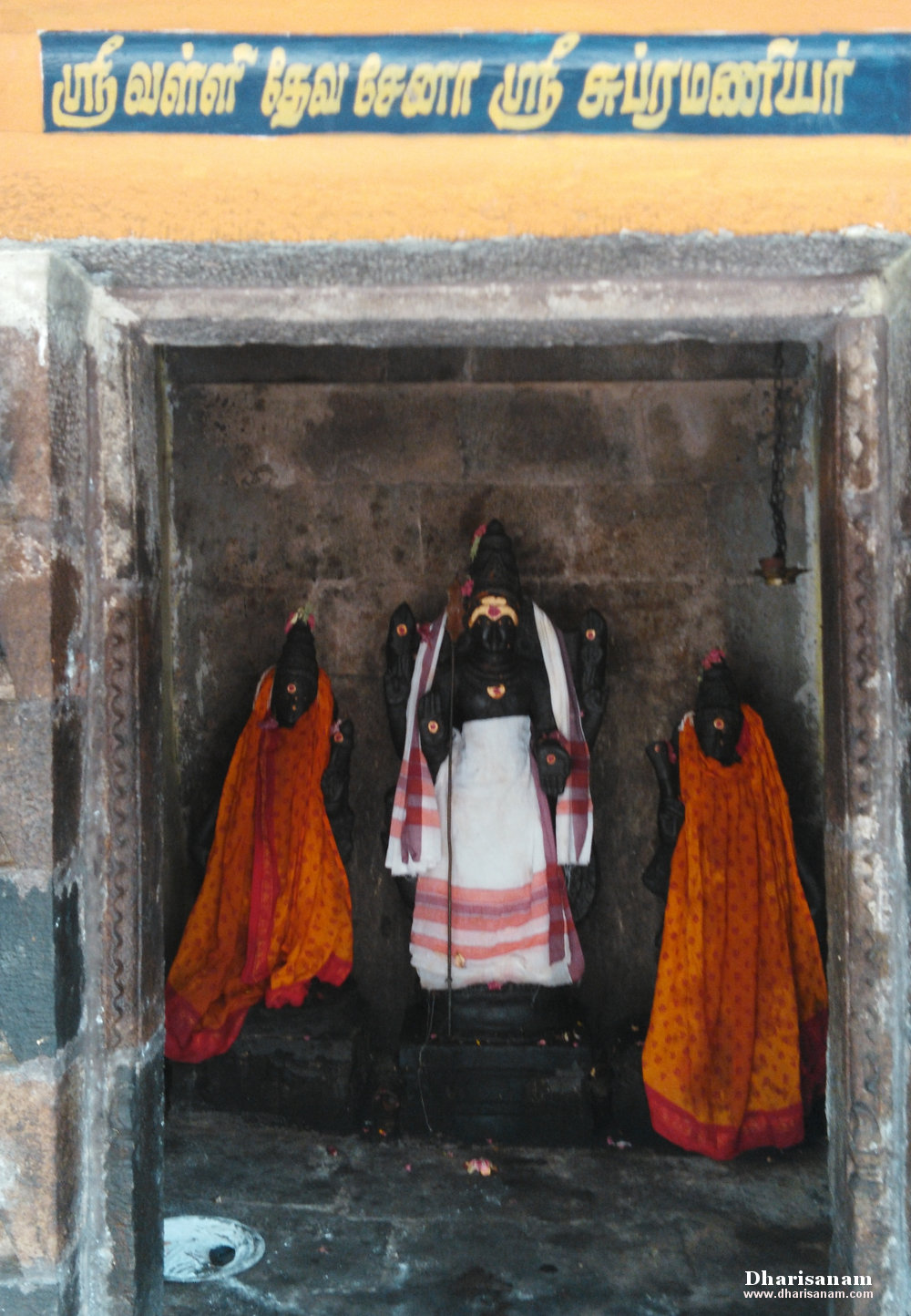 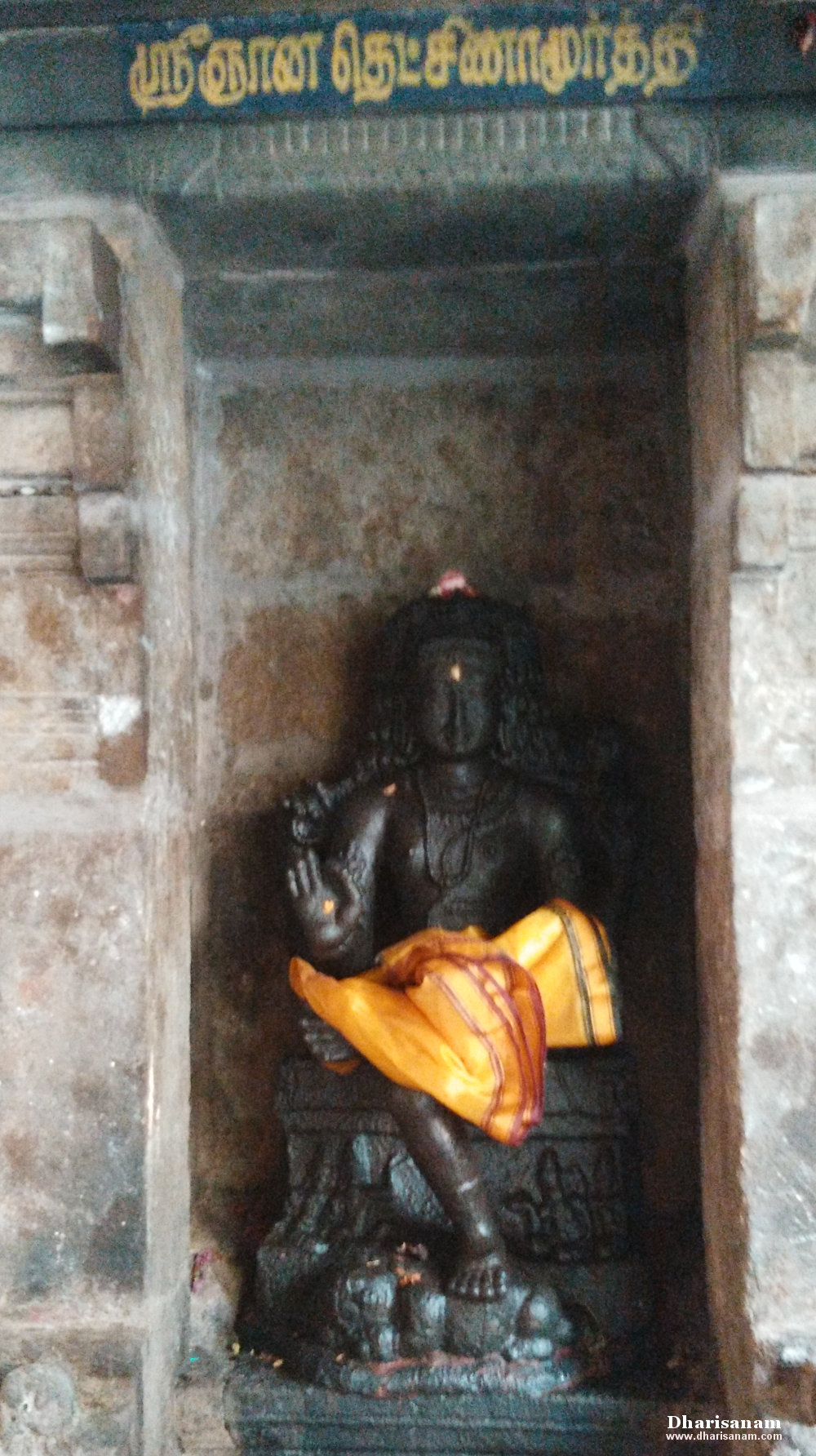 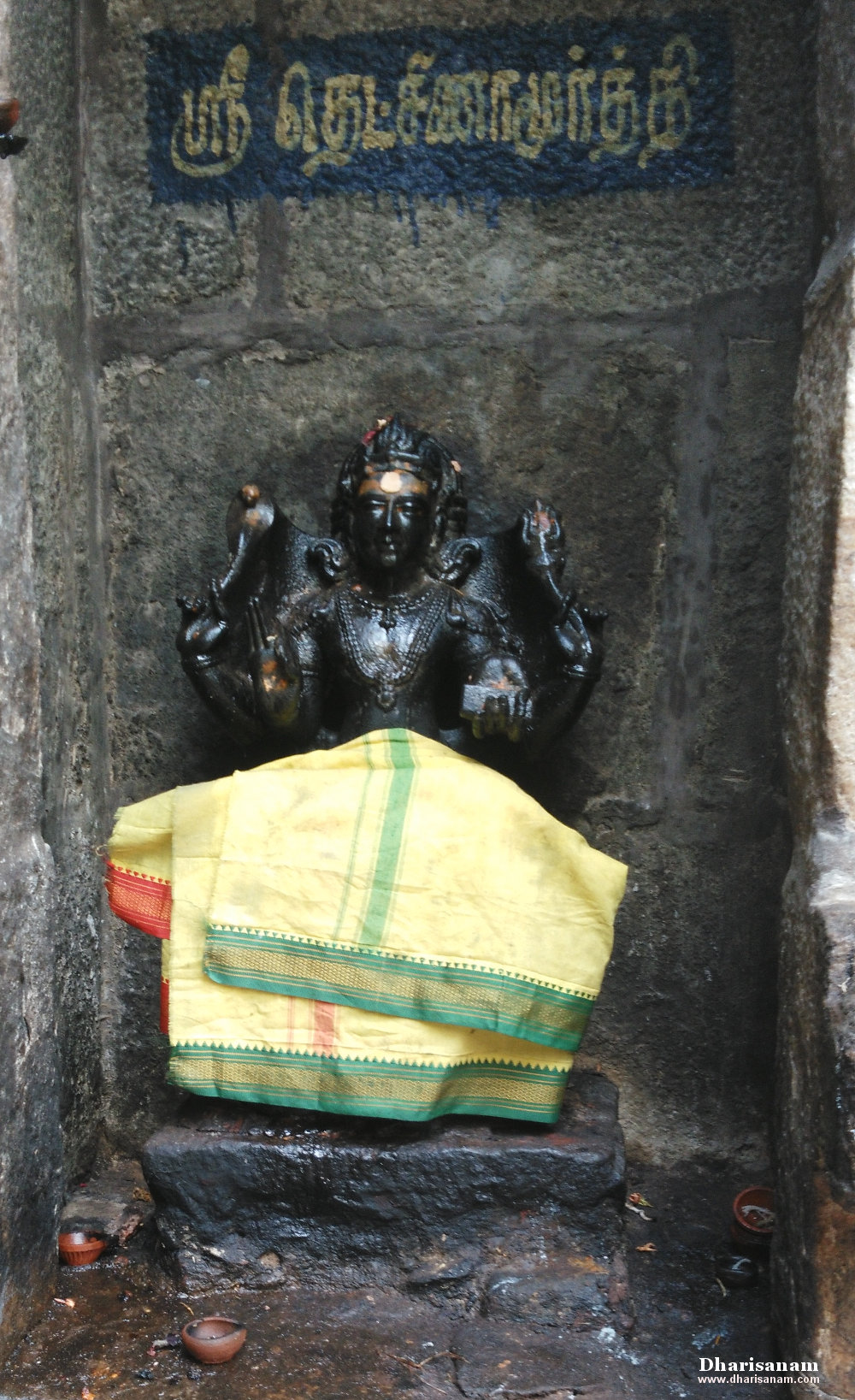 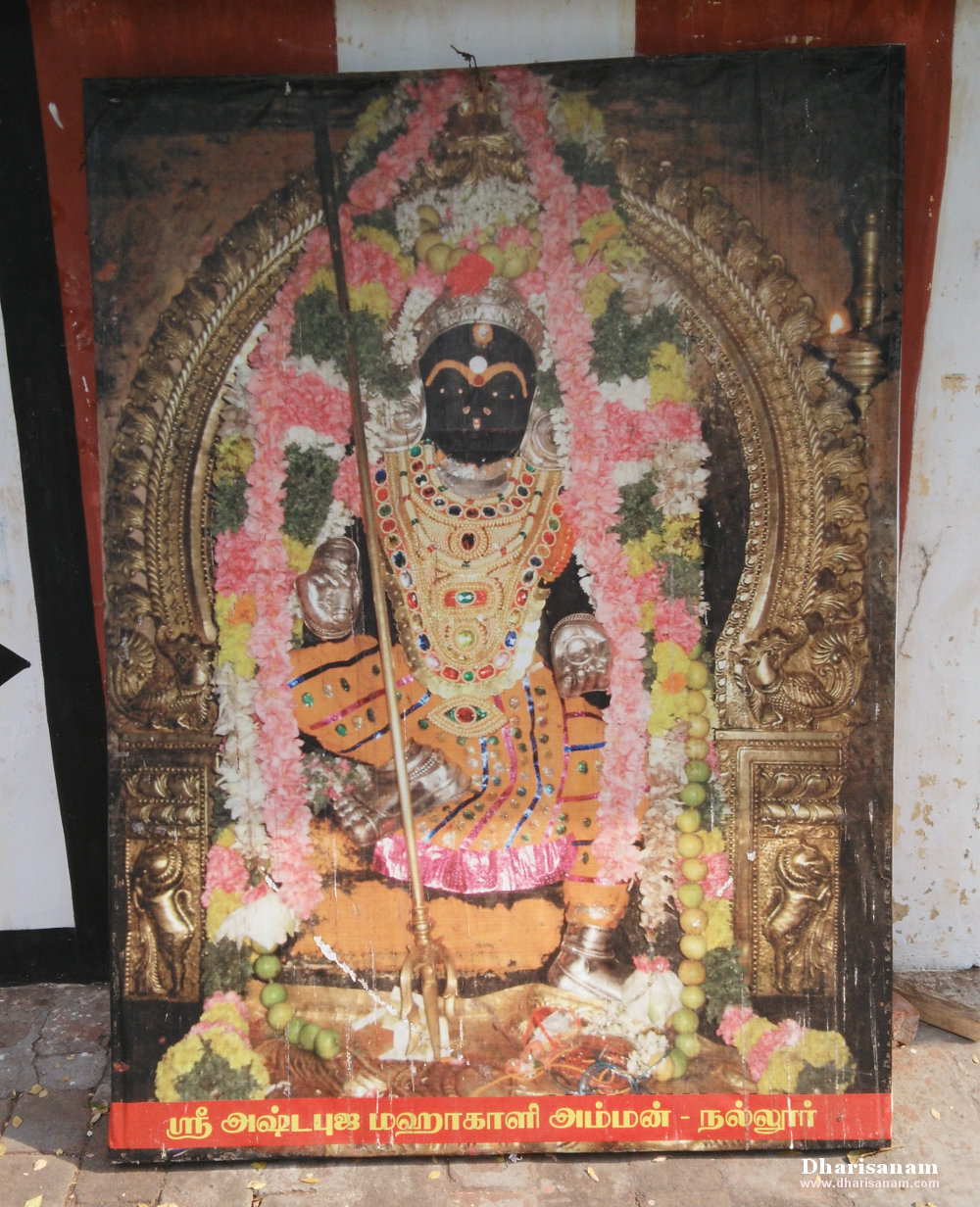 Inside the sanctum, at the back of the main lingam, there is a sculpture of Lord Shiva and Goddess Parvathi in their wedding form. Mahavishnu and Brahma can also be seen in this sculpture.

The “Balipeeta” (platform for making offerings) is referred to as Lord Gananathar. It is considered to be a form of Lord Shiva. There are only two places where Gananathar can be seen in this form – one in Varanasi and the other one here. 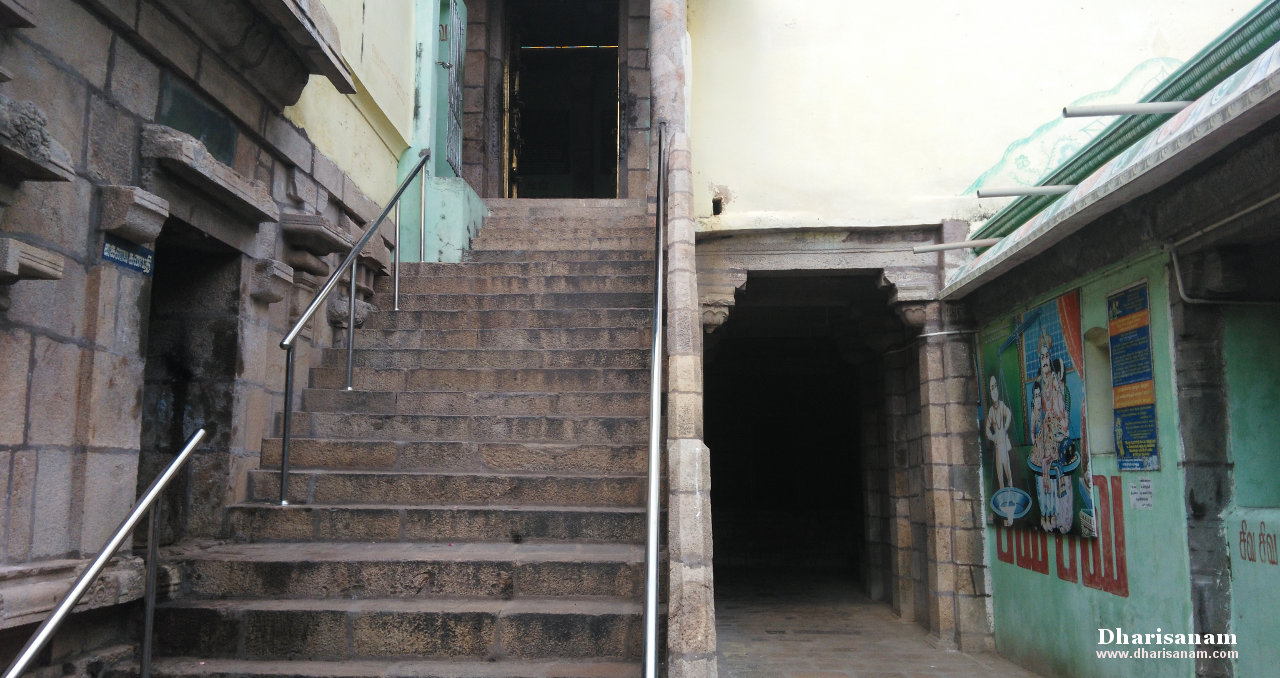 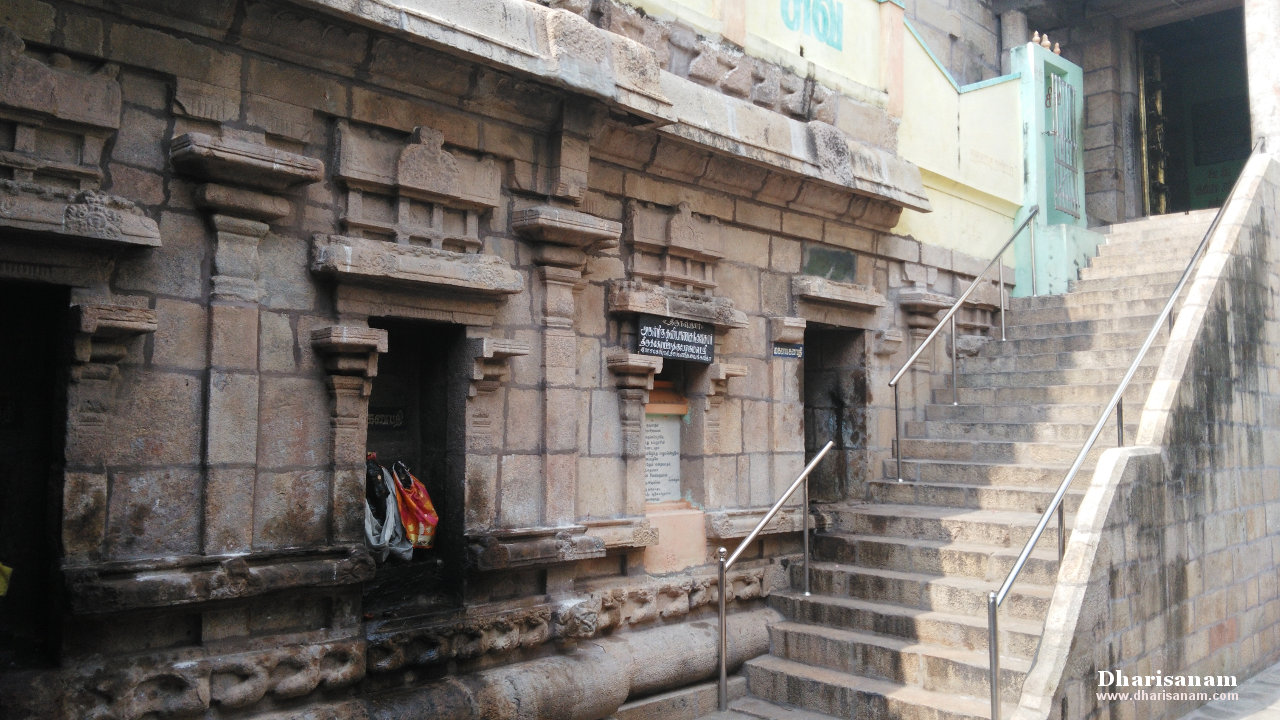 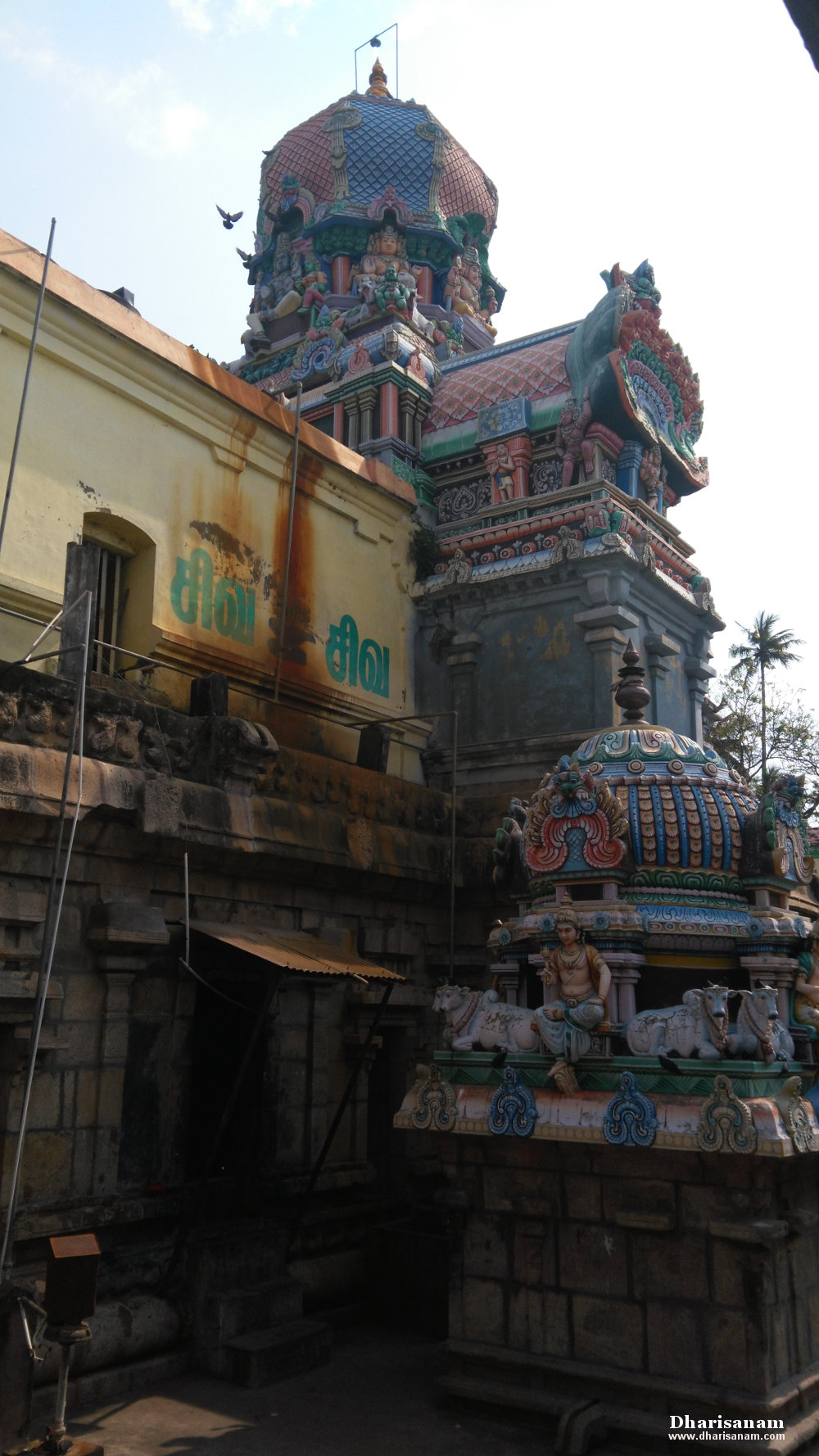 A very interesting phenomenon, a miracle even, is that the Shiva Lingam here changes colour every six “nazhigai” (one nazhigai equals 24 minutes). This means that the Shivalingam changes to a different colour after every 2 hours and 24 minutes. From 6 am to 8:24 am the lingam is copper coloured, between 8:25 am to 10:48 am the lingam is red in colour, it changes to a golden hue between 10:49 am and 1:12 pm. Between 1:13 pm and 3:36 pm the colour changes to emerald green and finally, the lingam appears multi-coloured between 3:37 pm and 6 pm. Hence the lord gets the name “Sri Panchavarneswrar”.

The idol of Uchishta Ganapathy here can be seen with his wife.

Lord Shiva’s hair (“Jada Mudi”) is believed to occupy the space behind the sanctum. Hence, no one is allowed to go around the inner corridor.

This temple’s ancient Sthala viruksham (vilvam tree) is called “Aadhimaram” (“adhi” means very old and “maram” means tree in Tamil). This tree is believed to be the first tree on earth.

In the corridors, there are many beautiful sculptures depicting various “avatars” of Lord Shiva.

In this temple, we can see a sculpture of Lord Narasimha on the vimanam (tower) of the sanctum.

Devotees who are born during the time of “Maka nakshatram” can visit this temple to seek the blessings of the lord.

Devotees believe that by worshiping the lord here, they will be relieved from the sins committed by them (such as illicit relationship, abortion, cheating and adultery).

It is believed that a dip in this temple’s holy water, Saptha Sahara Theertham, will absolve a person from all his sins. This Theertham is considered to be as auspicious as the Kumbakonam Mahamaham tank. 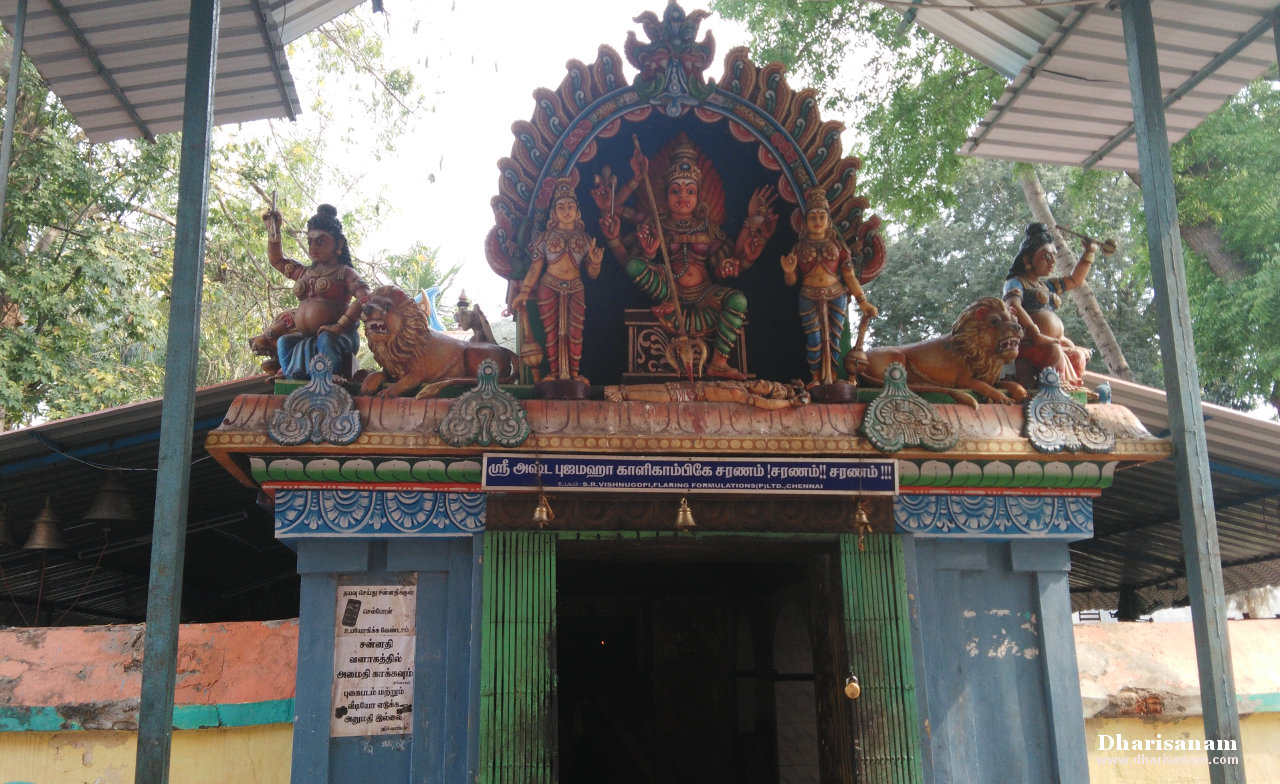 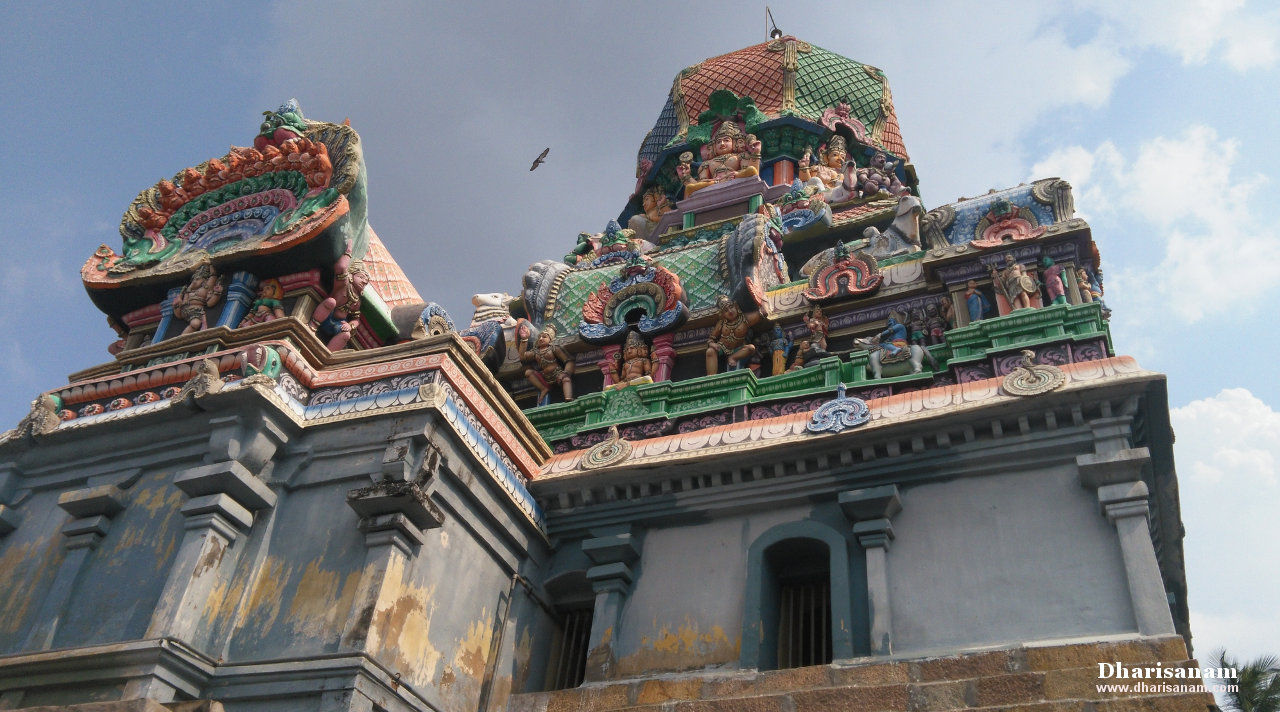 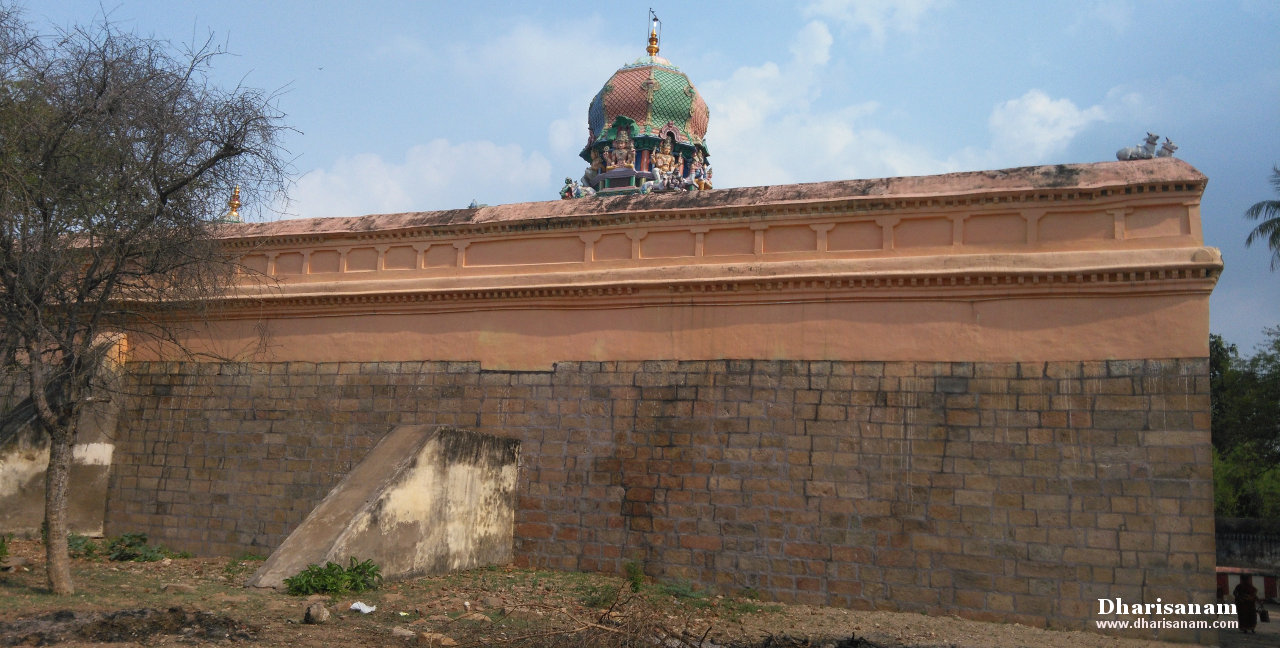 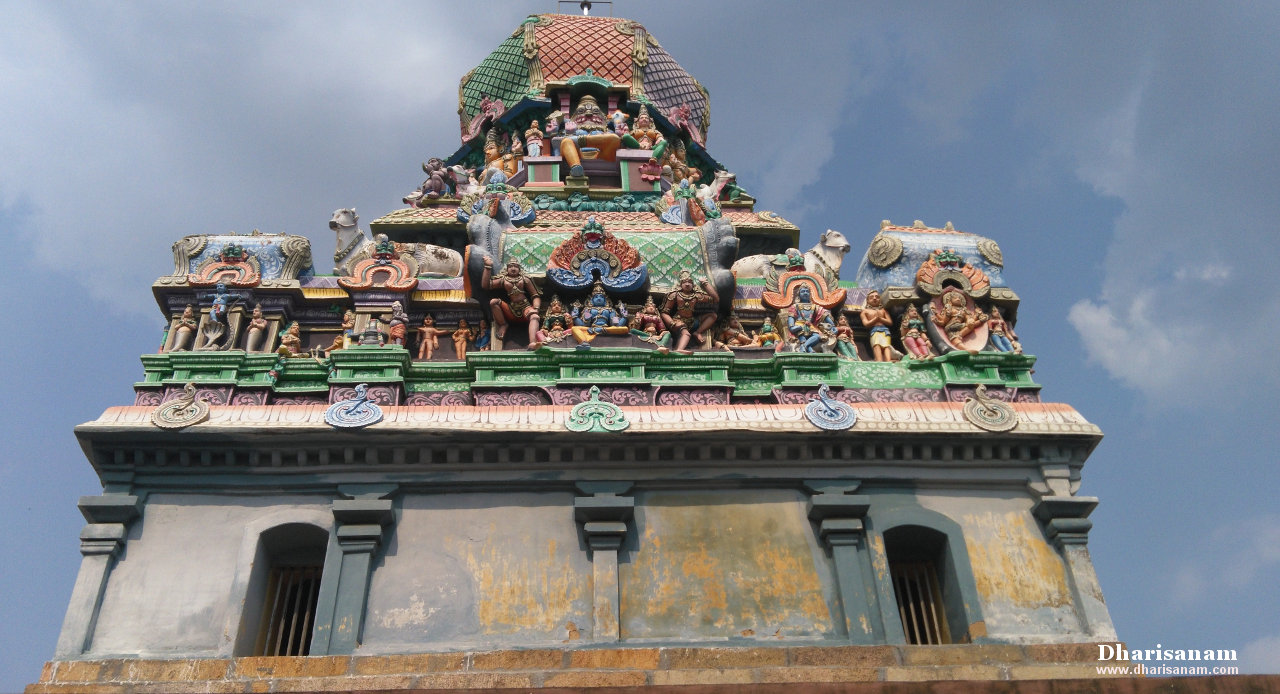 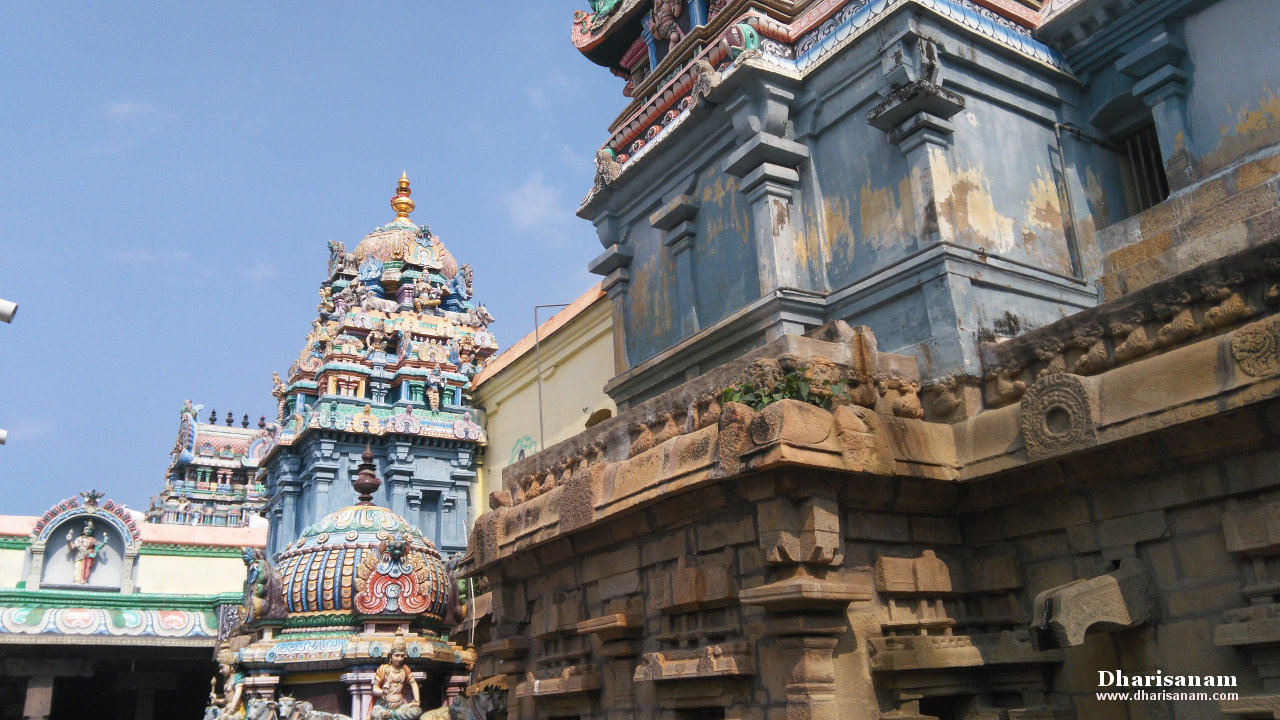 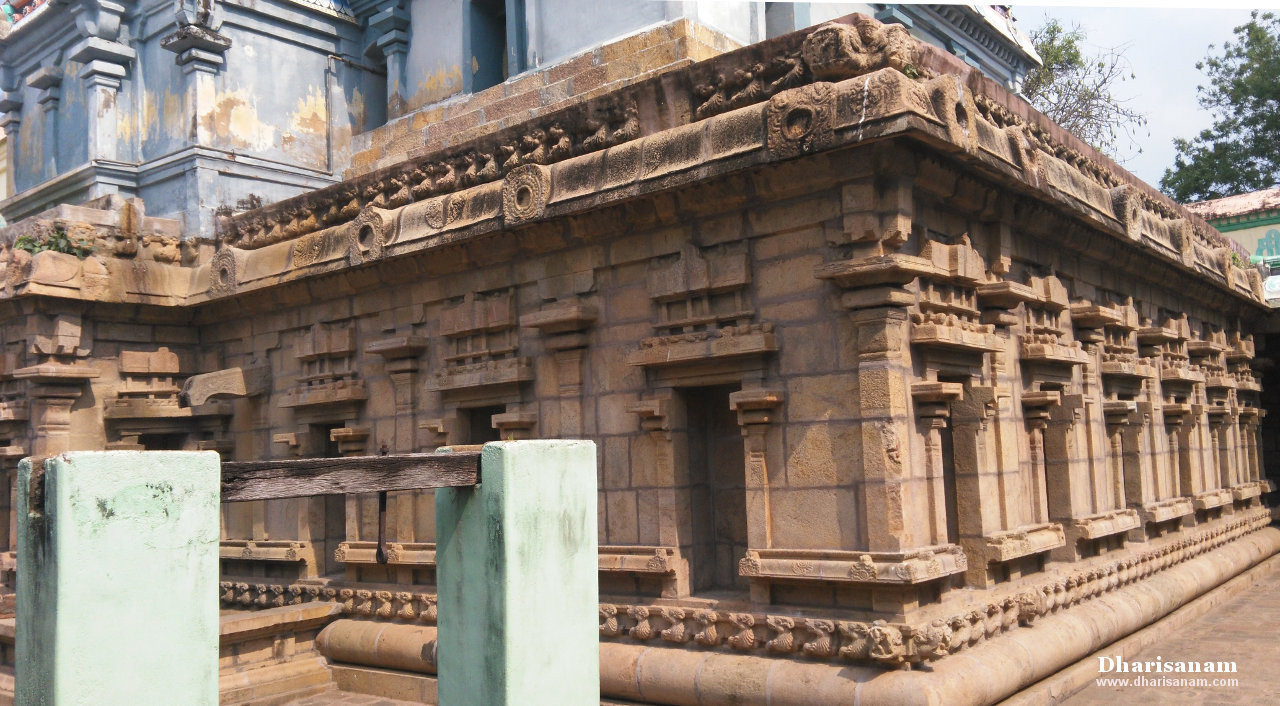