The temple was constructed during the Chola period.

Karur is said to be one of the five capitals of Chola kingdom.

From the inscriptions, it can be inferred that this temple existed during the reign of the King Rajendra Cholan (1012-54 A.D.) and that he also gifted lands to this temple.

It is believed that Lord Brahma became very proud of his position as the Creator of the world and Lord Shiva decided to teach him a lesson in humility. During the same time, Kamadenu was also looking to obtain Moksham so Lord Shiva instructed Sage Naradar to ask Kamadenu to go to earth and perform penance in a “Vanji” forest. (Vanji is a tree that is indigenous to the Indian sub-continent). Following these instructions, Kamadenu reached Karur, since it was at that time fully covered by Vanji trees.  Kamadenu found that the lingam at this place was fully covered by an anthill. She cleared the anthill and started worshipping the Lord here. Incidentally when Kamadenu was performing abishekam, the hoof hit the lingam and that impression can still be seen on the lingam. Pleased with her devotion, Lord Shiva blessed her with Lord Brahma’s role - the power of creation.  Lord Brahma realized his mistake and pleaded to Lord Shiva to forgive him. Lord Shiva forgave him and reinstated his position of the creator of the world. In recognition to Kamadenu’s dedication, Lord Shiva said that he would be worshipped as Pasupathi Nathar in Karur (Pasu meaning cow). 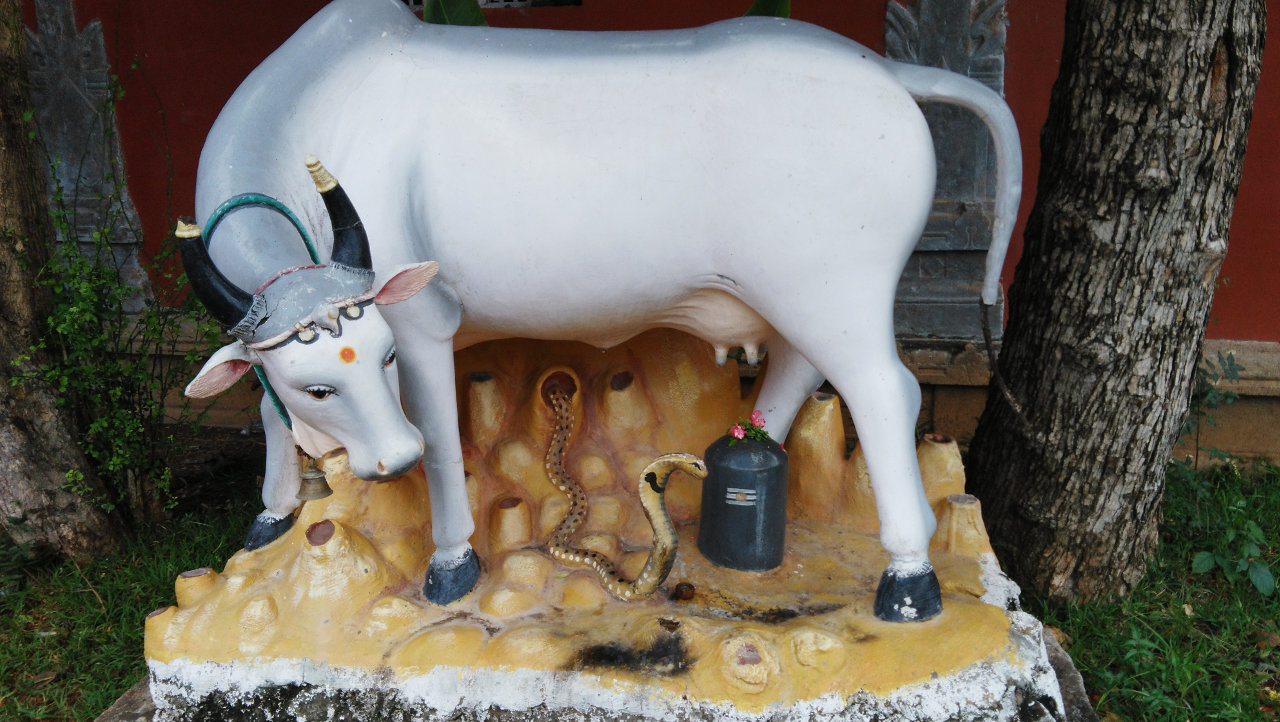 Emperor Musukunda, belonging to the Skanda Mahapurana period, is believed to have undertaken renovation of this temple. According to the history of this place, Emperor Musukunda was extended an invitation to attend the wedding of Lord Murugan with Deivanai that took place in Thiruparankundram near Madurai.

It is believed that Eripatha Nayanar, a staunch worshipper of Lord Pasupatheesvarar, had dedicated his life towards protection and welfare of other Shiva devotees.  He would always carry a weapon - an axe, for this purpose. With the axe he would punish anyone trying to harm the devotees. During the same time, another Shiva devotee, Sivakami Andar also lived in this place. It is believed that every day Sivakami Andar would collect flowers, make garlands and give them an offerring to the Lord.

Once, on a Navami day, as Sivakami Andar was going to the temple with a basket of flowers to give his offering, the king’s elephant wrenched the basket from him, threw it on the ground and ran away. Realizing that the elephant had destroyed the flowers he had kept for the worship of the Lord, Sivakami Andar started crying.

Eripatha Nayanar happened to pass that way and heard Sivakami Andar’s pitiable cry.  Upon enquiring what was happened, Eripatha Nayanar became furious that an elephant had caused an aged Shiva devotee such distress. He ran and overtook the elephant, hurled his powerful axe and killed it. He also killed the Mahouts because he felt that the Mohouts should have controlled the elephant but failed to do so.

On hearing the news of the death of his elephant, King Pugazh Cholan reached the spot with his soldiers. Upon further enquiry he was informed that Eripatha Nayanar had killed the elephant and Mahouts because of the distress that it had caused to another Shiva devotee. Since the king himself was a staunch Shiva devotee, rather than getting angry he felt ashamed that his elephant and the Mahouts had caused “Shiva Aparadham”.

He surrendered to Eripathar and requested him to kill him with his own sword as he deemed himself responsible for the actions of his elephant. Eripathar was stunned to hear these words and was moved by the King’s devotion to the Lord. Fearing that he might have caused distress to the King - another Shiva devotee, Eripathar wanted to punish himself and he began to cut his own throat. The king became alarmed. Realizing that he might become guilty of another offence, the King grabbed the sword and stopped Eripathar.

It is believed that at this point God’s voice was heard saying that this saga had unfolded because he wanted the world to know Eripathar’s sincere and faithful service. Immediately, the elephant and the Mahouts got up, as if from sleep and Sivakami Andar’s flower basket became full. 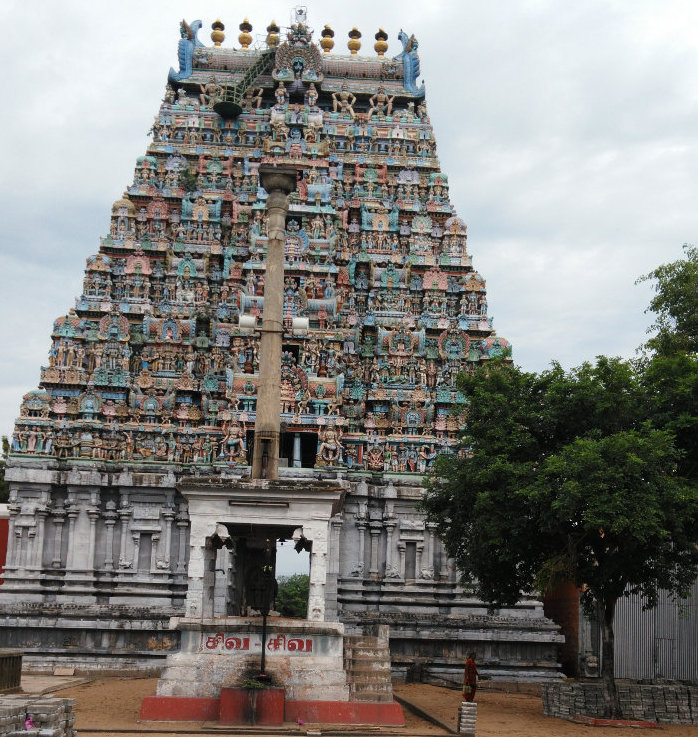 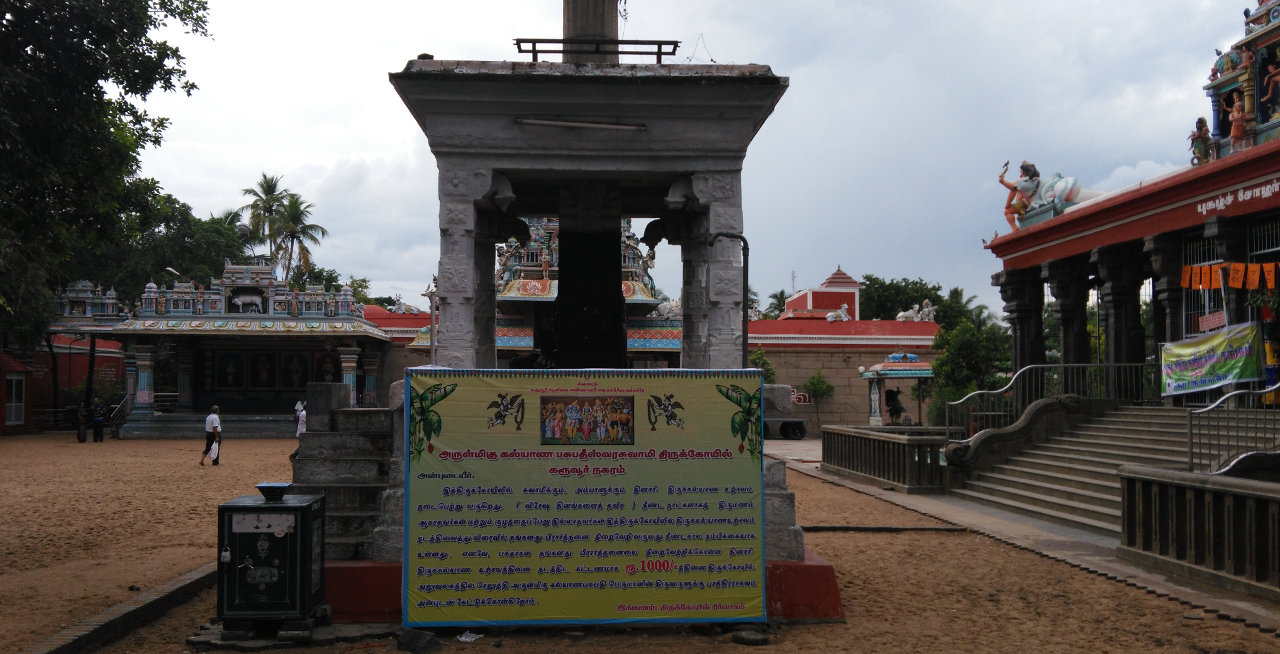 Another interesting story associated with Karur is that of the second consort of Lord Shiva - Soundarya Nayaki (also called Vadivudaiyal). It is said that Vadivudaiyal who was born in a place called Appipalayam (near Karur), was devoted to Lord Pasupatheeswarar and wanted to marry him. She worshiped the Lord faithfully and observed all religious injunctions. Her parents were worried as they could not dissuade her from what they felt was a foolish dream. However, Lord Shiva assured them in their dream that he would marry their daughter on the seventh day of the next Panguni Uthiram festival. This would be indicated through a floral shower over the entire village.

Vadivudaiyal was meditating when the whole village witnessed the downpour of flowers, and a glowing garland bedecked her. She was taken to Pasupatheeswarar temple where she merged with the Lord and re-christened as Soundarya Nayaki.  To this date, the procession idol of Lord Pasupatheeswarar is taken to Appipalayam, on the sixth day in the month of Panguni and is brought back on the seventh day along with the idol of Soundarya Nayaki.

Amongst others, idols of Vinayakar, Murugan with his consorts, Natarajar, Dakshinamurthi, 63 Nayanmars,  Mahalakshmi, Navagragam, Pancha Lingams, eight-armed Kala Bhairavar can be seen in the corridors.

There is a 100 pillar Hall (Mandapam) in front of the shrine and is called Pugazh Chozhar Mandapam.

There is a beautiful sculpture in the outer corridor (Pirakaram) depicting a cow making an offering of milk to the Shiva Lingam.

Saint Arunagirinadhar has also sang 7 songs in praise of Lord Murugan of this temple in his revered Thirupugazh.

Though the Sthala Vriksham is said to be Vanji, only Vilva trees can be seen now.

The architectural marvel of this place is such that on 14th, 15th and 16th days of the Tamil month of Panguni (March-April), sun rays fall directly on the idol of Lord Shiva.

Large number of devotees come to Lord Pasupatheeswarar temple to seek relief from mental ailments and to pray for child and wedding boon, better employment opportunity and for progress in trade / business. 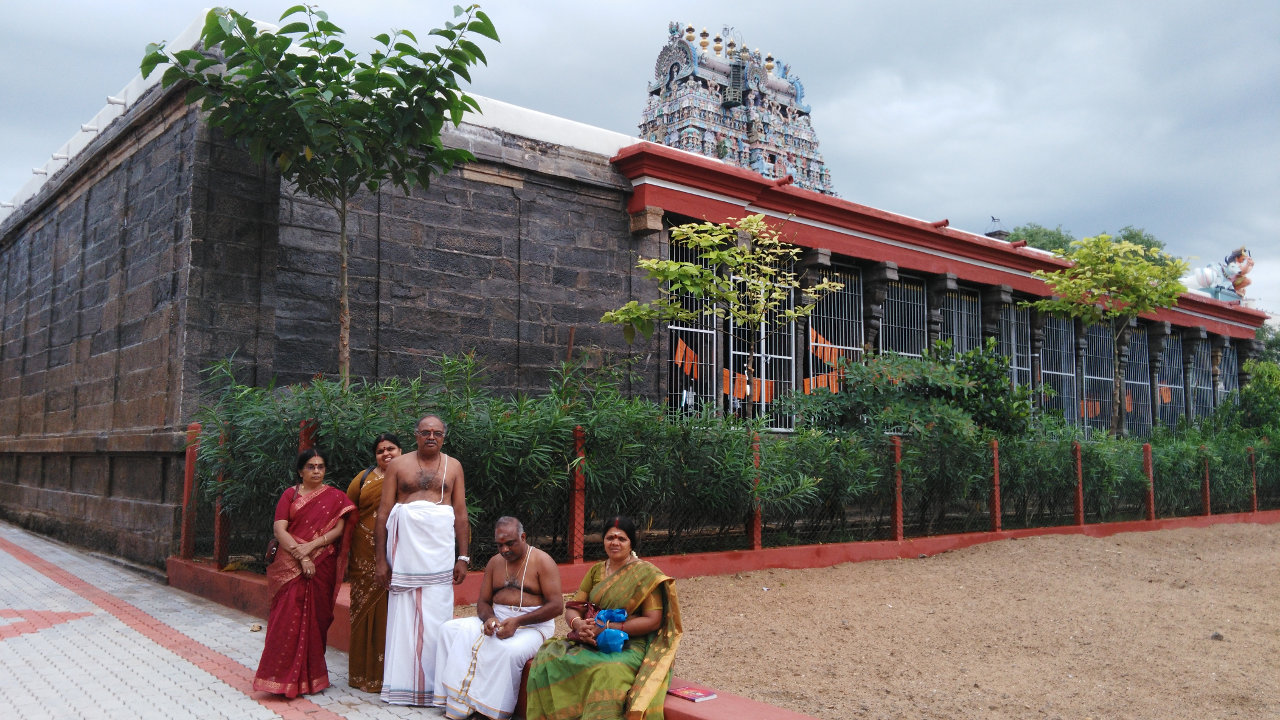