Thiruvanaikkaval is a part of Trichy (also known as Thiruchirappalli) and is situated at a distance of about 8 kms from the Trichy bus stand. It is 3 kms away from Srirangam and is between the Kollidam and Cauvery rivers.

This is an ancient, sprawling and magnificent temple which highlights the architectural splendour of the past. The temple complex is a whopping 18 acres of land. In ancient times, this place was densely populated with white Naaval trees.

The temple was built about 2,500 years ago by the Emperor Kochengat Chola.

It is believed that an elephant and a spider have worshiped the lord here and obtained salvation. The name of this temple is derived from this legend. “Thiru” is a respectful prefix, “Anai” means elephant and “koil” means temple in Tamil. Now it is known as “Thiruvanaikkaval”. 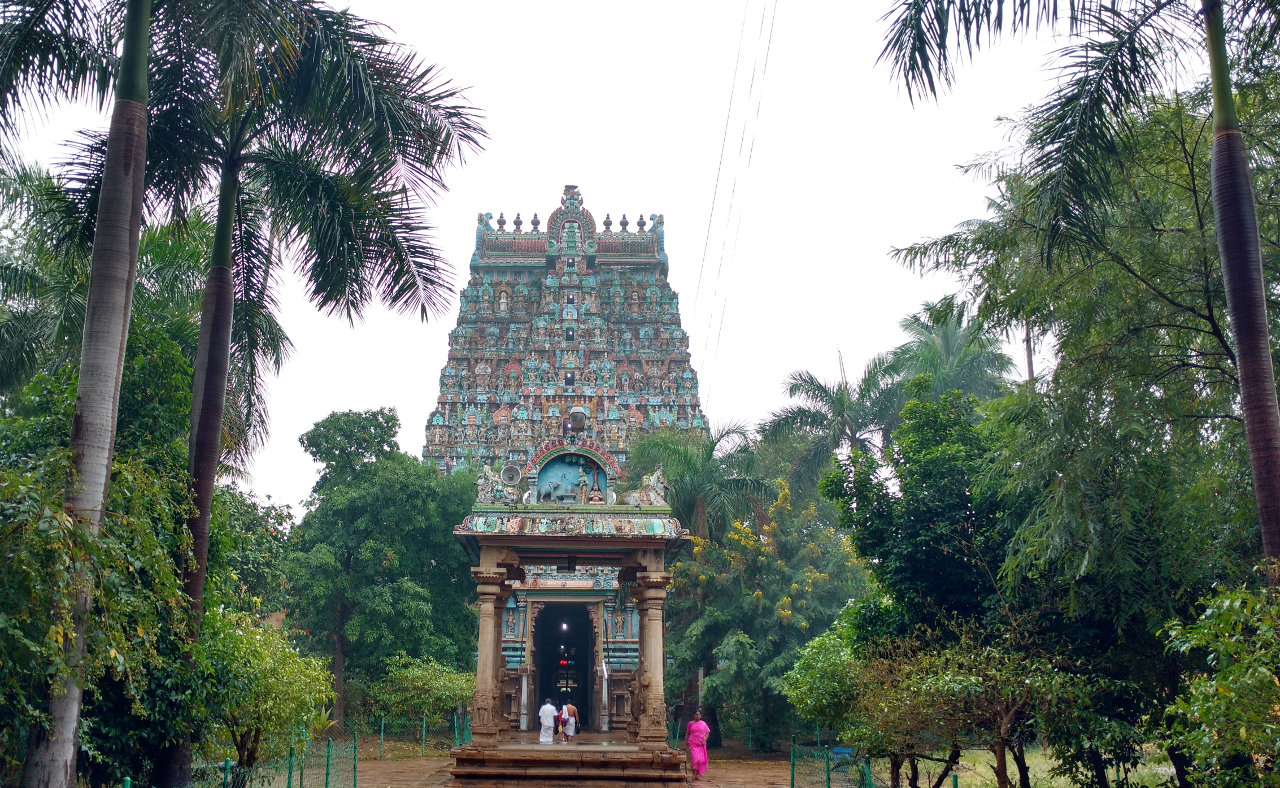 Because of a curse, two Shivaganams (Lord Shiva’s security guards) namely, Pushpathanthan and Gnanatharul Maliyavan were born as an elephant and a spider respectively. In order to seek relief from their curse, it is believed that they worshiped the lord of this temple. There had been a forest of Jambu (naaval) trees near the Chandratheertha tank (filled with the water of the river Cauvery) here and Lord Shiva is said to have appeared under one of the trees as a Swayambu lingam.

The spider is believed to have spun a web to give shelter to the Lord whereas the elephant would bring water in its trunk for performing Abhishekam. The elephant would destroy the web and the spider would promptly spin it again. This continued for a while.

One day, the spider decided to stop the elephant and went inside the trunk of the elephant and bit it. It is believed that the elephant hit its trunk on the floor to shake the spider off but in the process, both of them died. The Lord was pleased with their relentless devotion and both the spider and the elephant attained salvation (moksham). Since Pushpathanthan (born as elephant) fulfilled his penance by performing abhishekam, he was relieved of his curse and returned back to Shivalogam to take his place as a Sivaganam.  However, the spider’s wish of building a temple around the lingam was not fulfilled and hence it was born again as King Kochengat Chola.

It is believed that King Kochengat Chola built 70 “Madakkoils”. The distinguishing feature of a Madakkoil is that it is not easily approachable by an elephant. Sensing the story of his previous birth, he built these temples at an elevation and there are a few steps that need to be climbed before seeing the lord. Also, the sanctum sanctorum’s (Karpagragam) entrance is narrow such that no elephant can enter it. 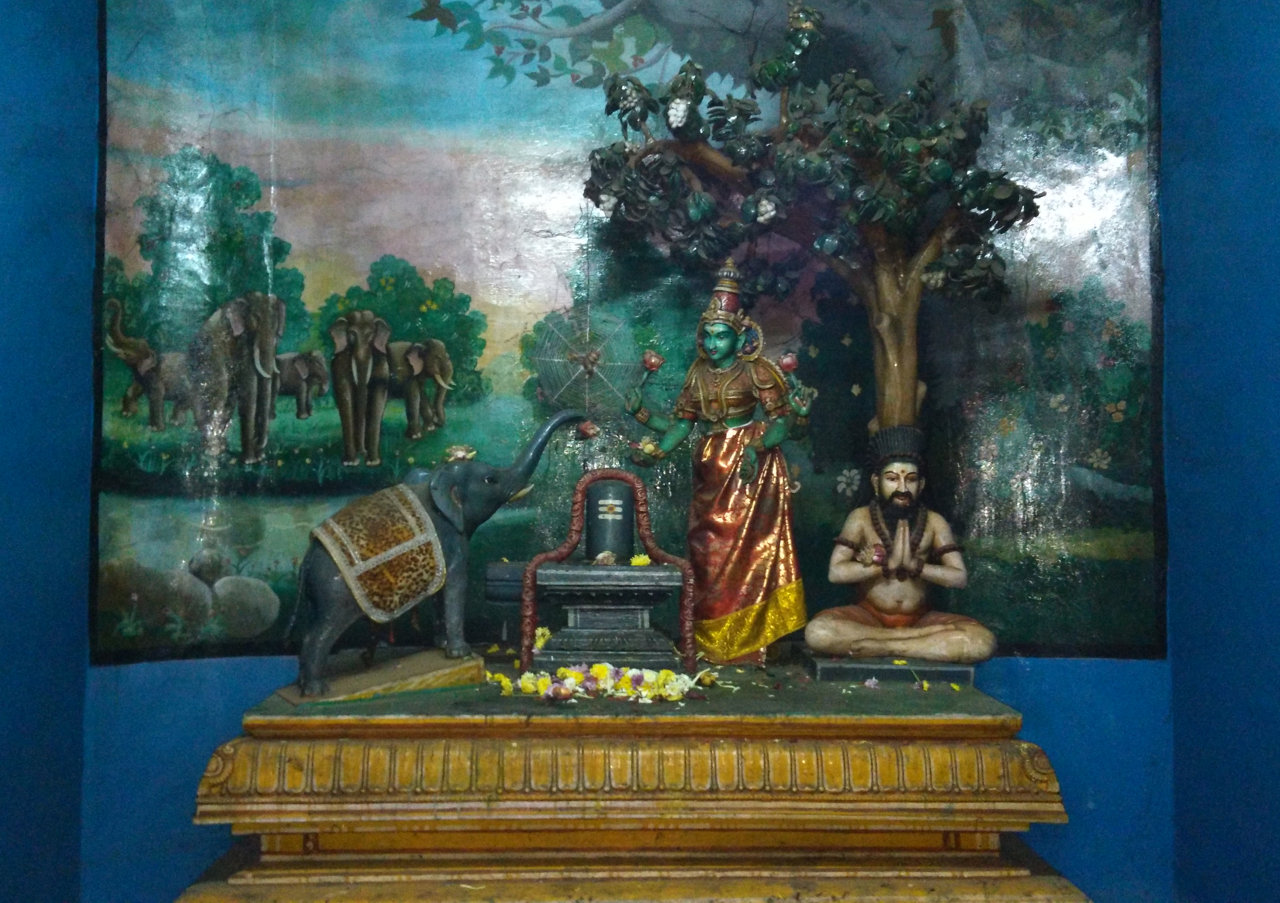 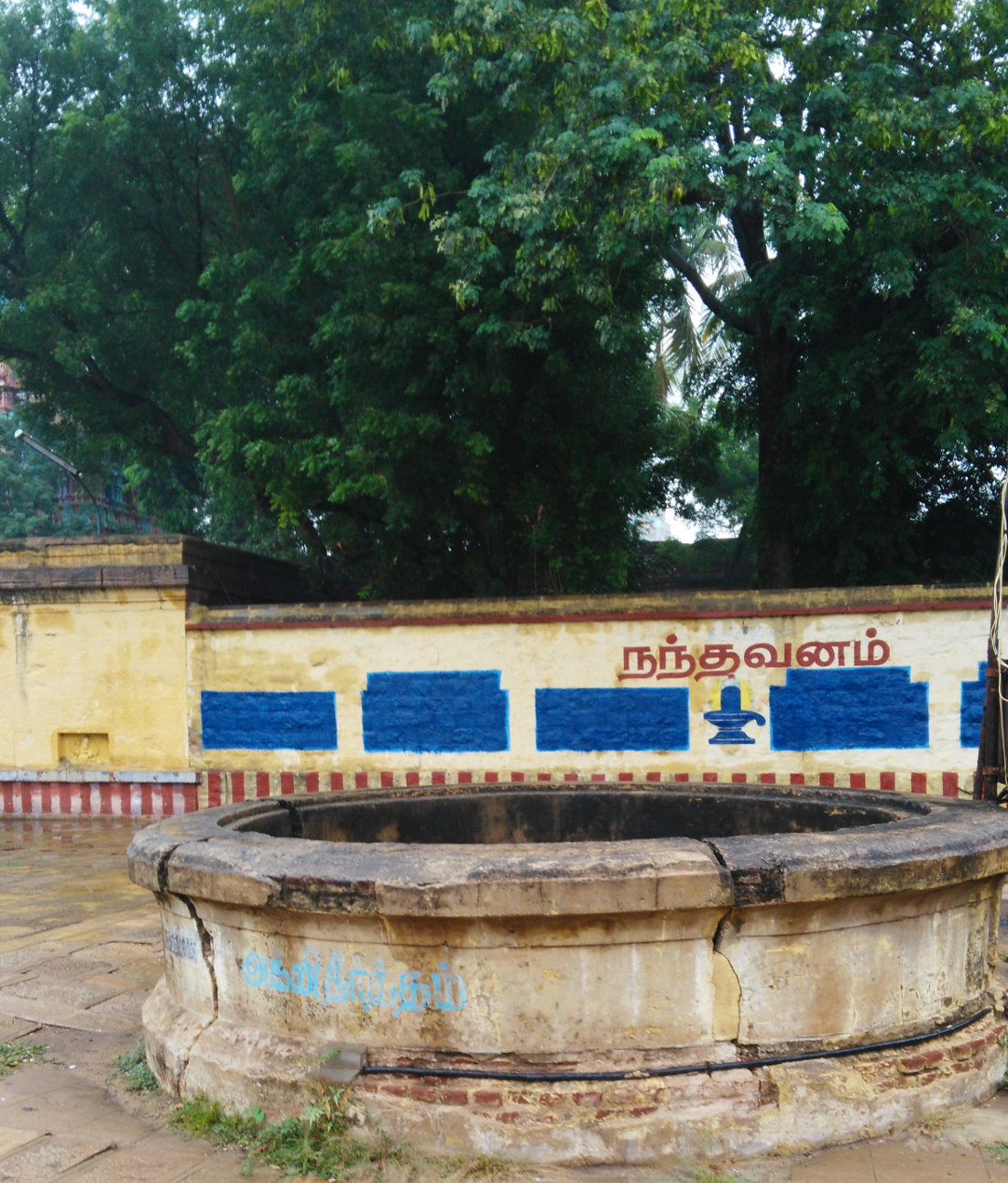 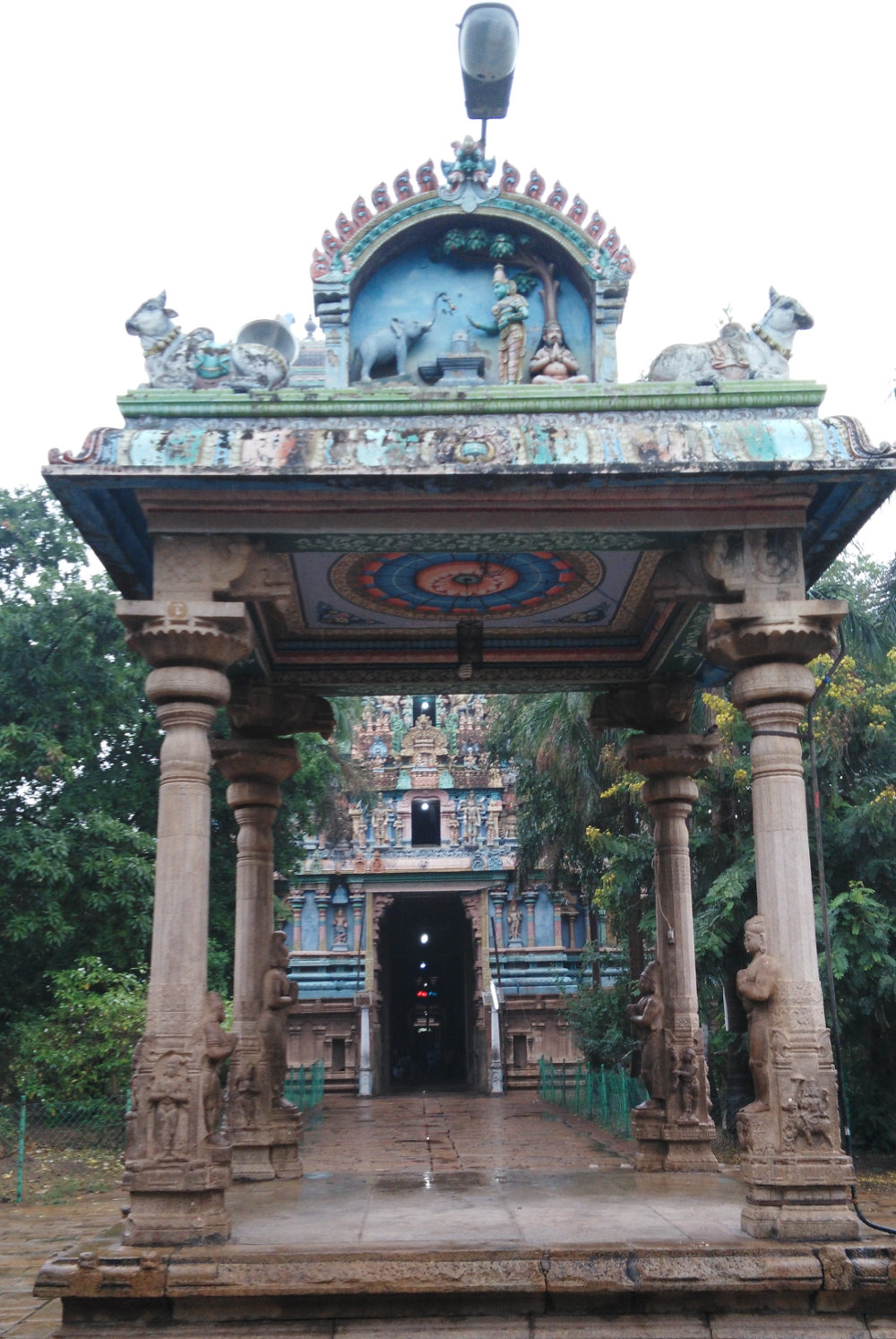 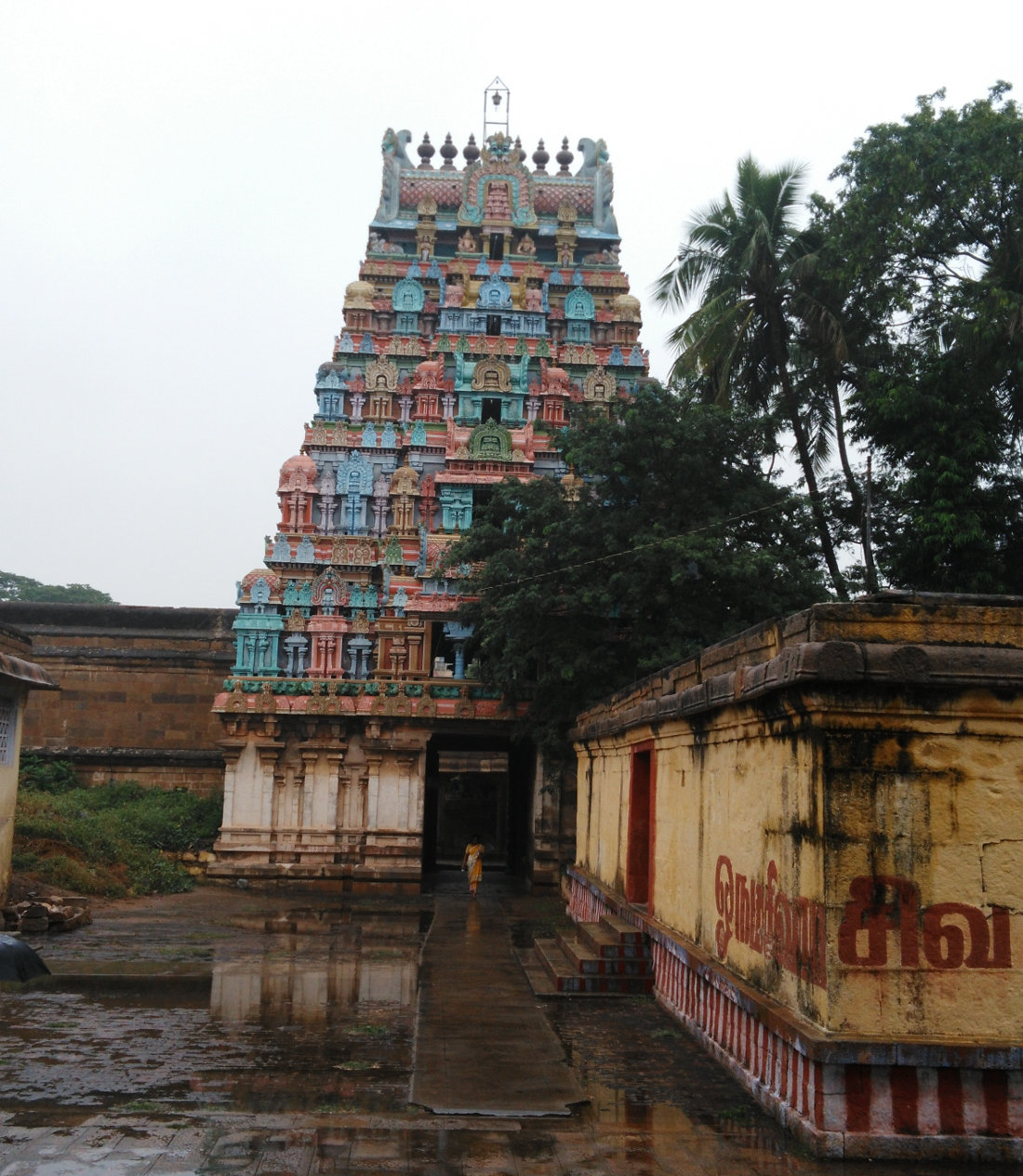 Another legend associated with this place is that of sage Jambu who worshiped Lord Shiva here. Lord Shiva granted darshan to the sage and offered him a Naaval fruit (blackberry) as prasad. While consuming the prasad, the sage swallowed the seeds too as he thought it a sin to spit the seeds. The seeds began to grow into a tree and pierced his head thus leading to his salvation. As Lord Shiva granted salvation to sage Jambu here, he is praised as “Sri Jambukeswarar” and this place is known as “Jambukeswaram”.

It is also believed that Goddess Parvathi (as Akilandeswari) performed penance in the Jambu forest here in Thiruvanaikkoil. She created a lingam out of sand and water from the river Cauvery and installed it under the same Jambu (Venn Naaval) tree which is believed to have emerged from Saint Jambu. This lingam is known as “Appu Lingam” (Water Lingam). Pleased with her penance, Lord Shiva gave darshan to Akhilandeswari and taught her the “Shiva Gnana Upadesa”. Akhilandeswari took the “Upadesa” (lessons) facing east from Lord Shiva, who stood facing the west. Hence this temple is also revered as a Upadesa Sthalam.

Another interesting aspect related to this temple is that the “Wedding Festival” (Thiru Kalyanam) is not celebrated here. Also, the lord is not taken to the “Palli Arai” (bed chamber) at night. The reason behind this is that Lord Shiva here is seen as a guru (teacher) to Goddess Parvathi.

Another legend is that while constructing one of the temple’s wall, Lord Shiva came in the form of a saint (Vibhuthi Siddhar) and distributed sacred ash as the wages for the workers. This sacred ash turned into gold proportionate to the work done by the workers. This particular wall (4th corridor) is called “Thiruneetru Madhil”. “Thiruneeru means sacred ash and “Madhil” means wall in Tamil. This wall is well over 8000 feet long (2436+2436+1493+1493 feet), 35 feet high and 6 feet thick. There is a shrine for Vibhuthi Siddhar near the Brahma Theertham.

Another legend associated with this place is that of a Chola king from Uraiyur (near Trichy) who was an ardent devotee of Lord Shiva. Once he was taking a dip in the Cauvery river when his necklace fell in to the river. He prayed to the lord to get his necklace back. At the same time, a priest from this temple was fetching water in a pot for the lord’s abishekam. This chain went into the priest’s pot and was discovered at the time of the abishekam.

Lord Shiva of this temple is believed to have been worshipped by Goddess Parvathy, Lord Brahma, Lord Mahavishnu, Suryan, Chandran, Ashta Thikbalahars and Sages Agasthiar, Jambu and Gowthamar.

Other than the shrines of Lord Shiva and Goddess Parvathy, shrines and idols of lords Vallaba Ganapathy, Murugan, Dakshinamurthy, 108 Shiva lingams, Sankaaranyeswarar and Aadi Jambukeswarar can be seen in the corridors.

There is a separate lingam called Kubera Lingam which is believed to have been worshiped by Lord Kuberan.

There is a separate shrine for Lord Saneeswaran where he can be seen with his mother Chaya Devi and his wife Jyesta Devi.

There is also a shrine for King Kochengat Chola in the corridors.

Goddess Akilandeswari graces from a separate temple in the second inner corridor. 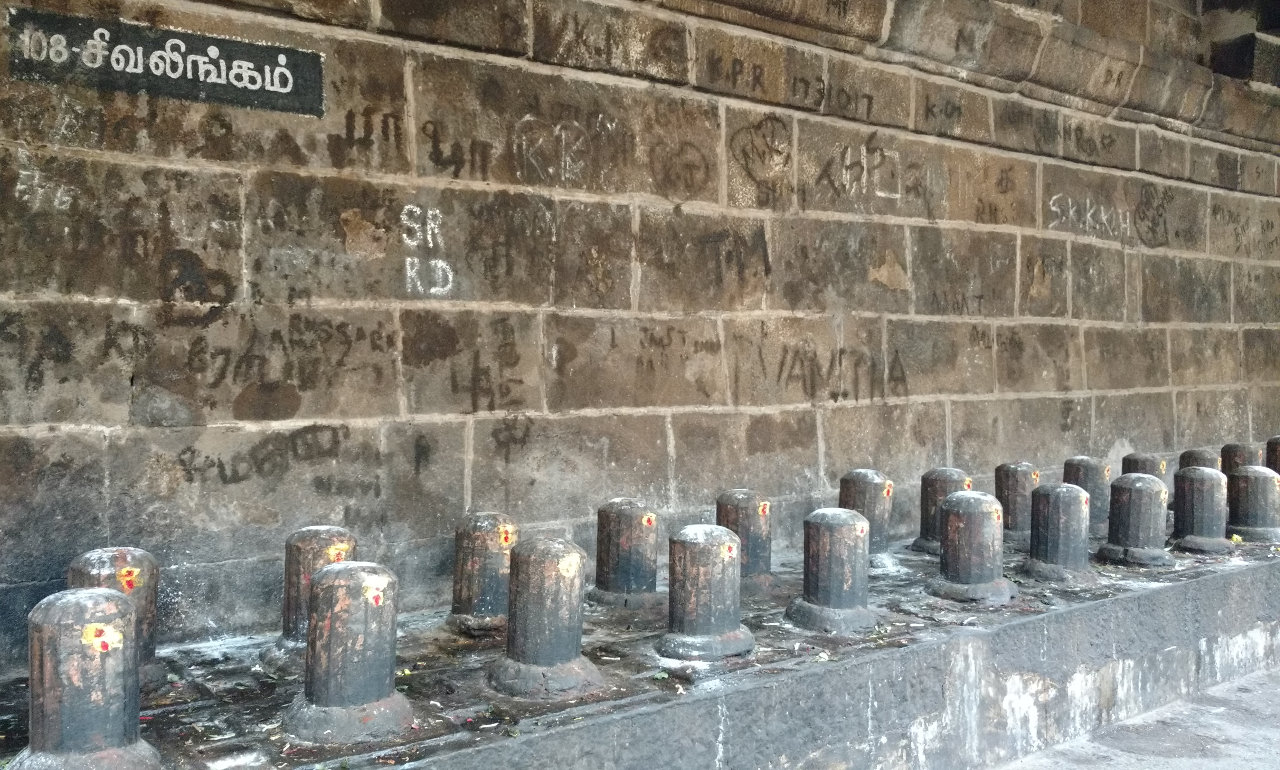 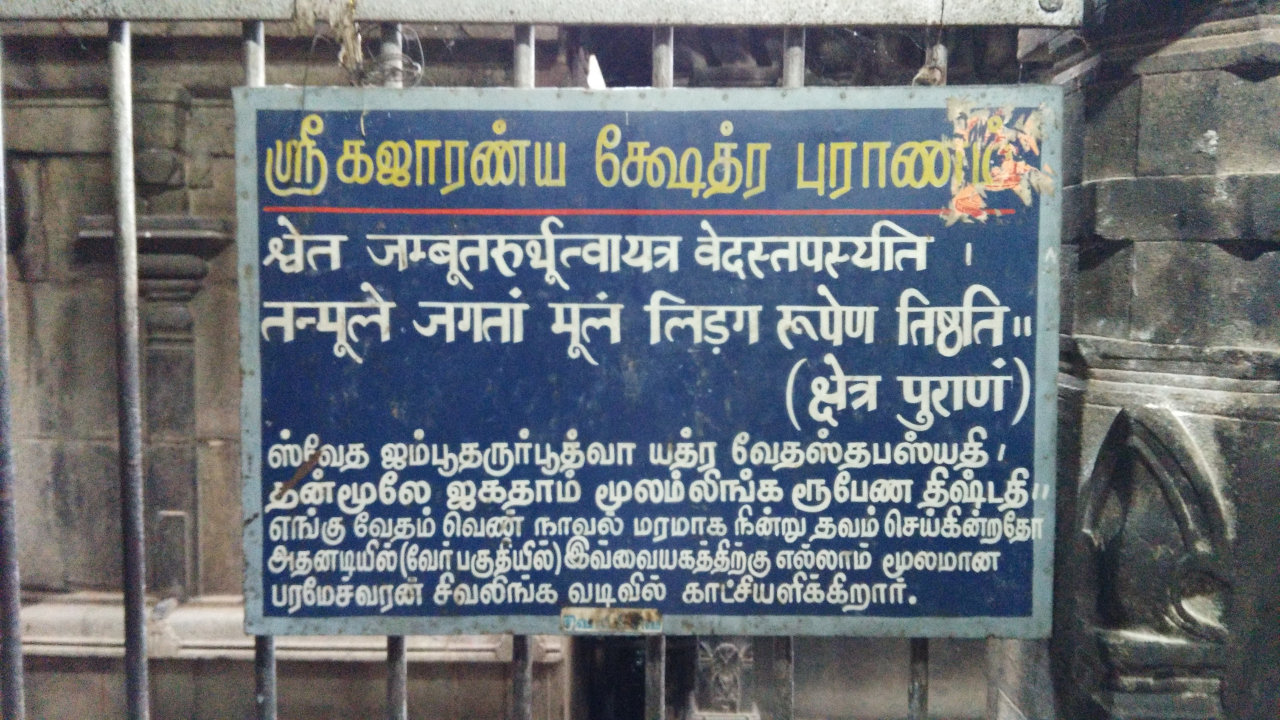 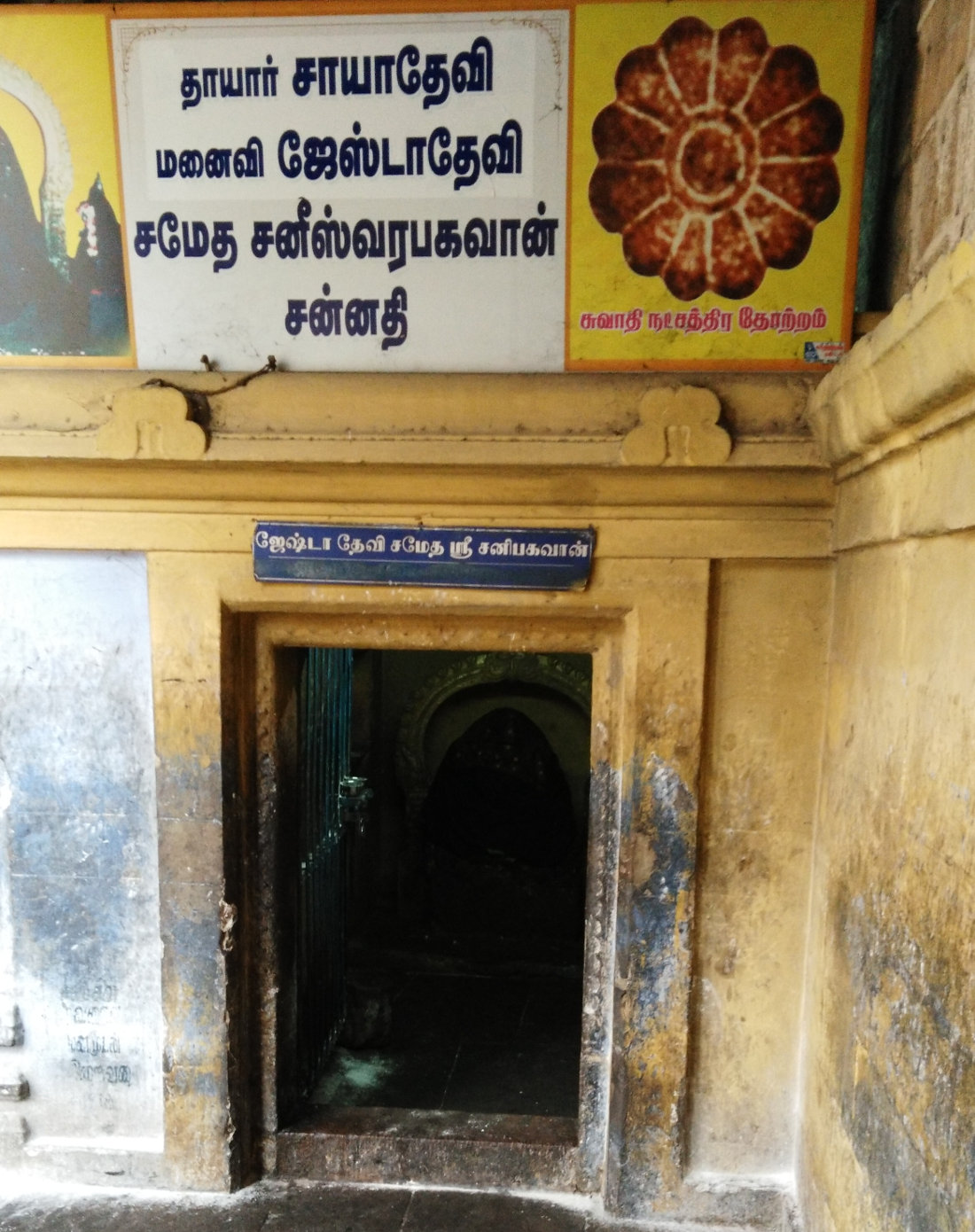 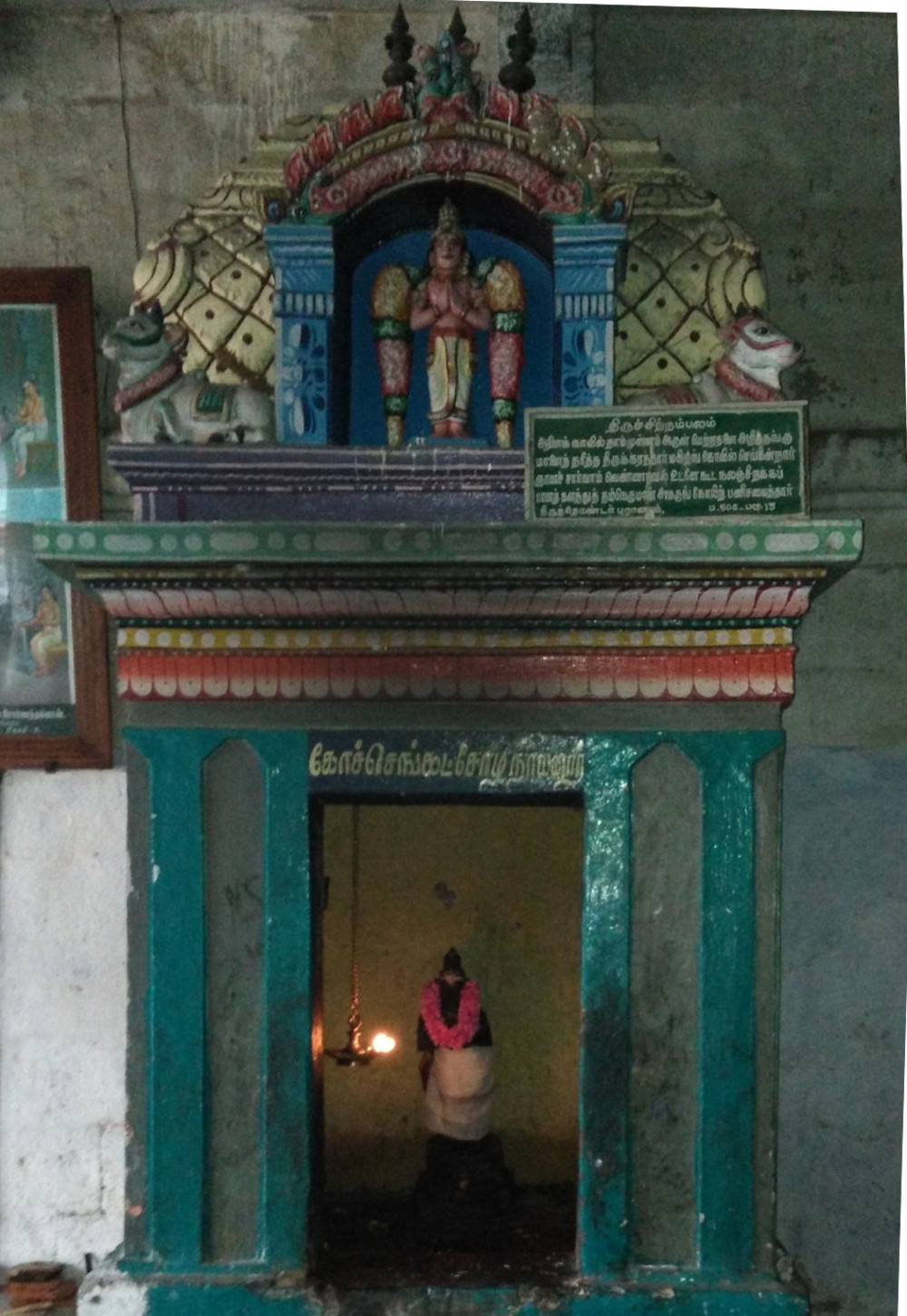 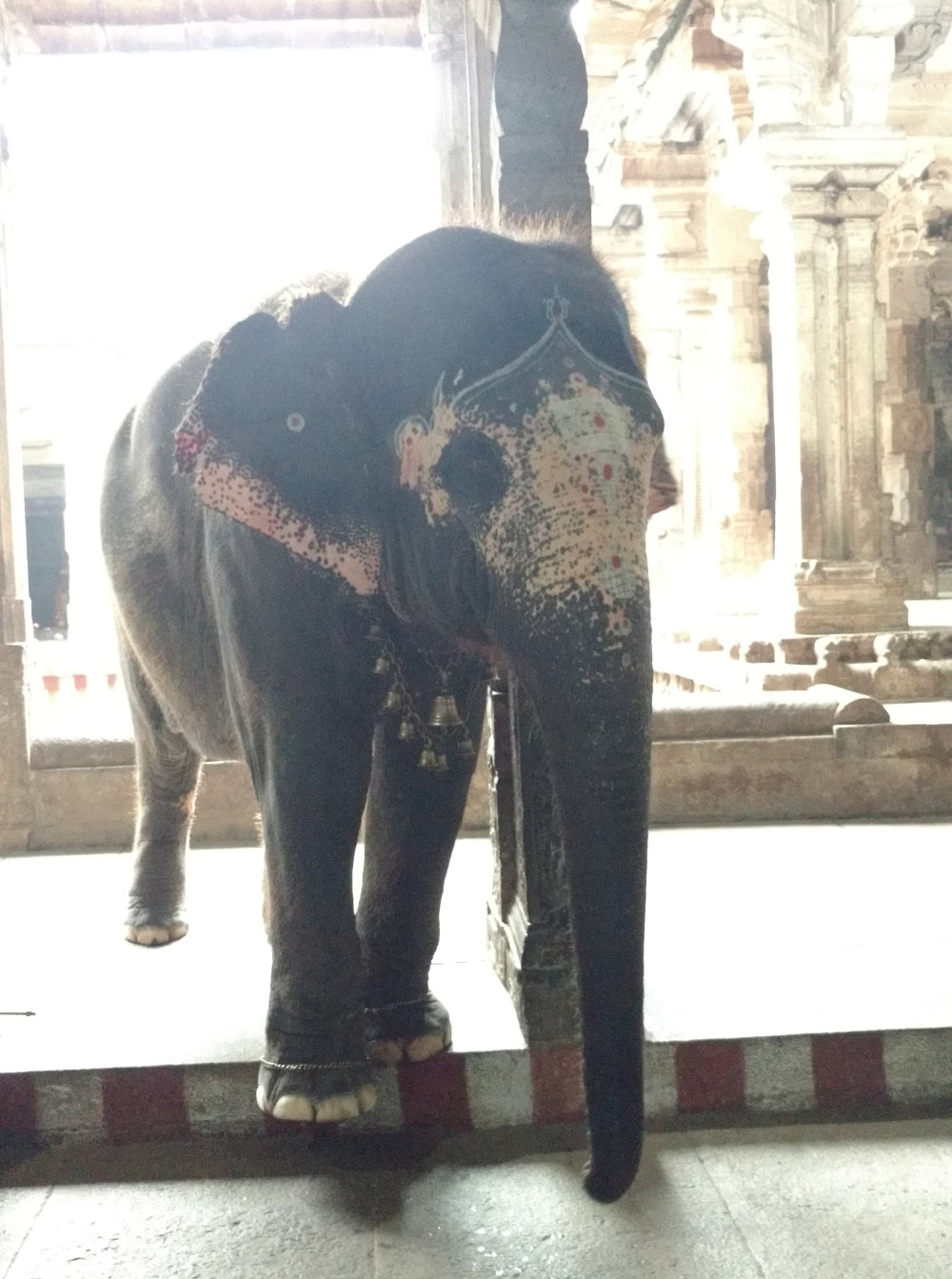 Thiruvanaikkaval Temple is one of the “Pancha Bhootha Sthalams” and it is the Water (Appu) Sthalam.

One of the five elements of nature, “water” is represented by an undying natural spring below the Shiva lingam in the sanctum. This can be seen even today and for this reason, the lord is also praised as “Sri Jalakandeeswarar” (“Jalam” means water in Tamil).
The other four Pancha Bootha Sthalams are -
Tiruvannamalai (Thejo sthalam - Fire)
Kanchipuram / Thiruvarur (Prithvi sthalam - Earth)
Kalahasti (Vayu sthalam - Air) and
Chidambaram (Akasa sthalam - Space).

Goddess Akilandeswari of this temple is very famous and she attracts a large number of devotees. “Akhilandeshwari” means “the ruler of the universe” (“Akilam” means universe, “Aanda” means ruler, and “Eswari” means Goddess in Tamil).

The ear ring of Goddess Akilandeswari is known as “Thadangam”. It is quite big and prominent. It is believed that earlier she used to look very aggressive and furious. Sri Adi Sankaracharya controlled her anger and contained it in the earrings as Chakras. One is called the “Shiva Chakra” and the other one is called the “Srichakra”. Also, to reduce her anger, Lord Vinayaka’s shrine is placed in front of her and Lord Murugan’s shrine is behind her.

During the noon pooja, this temple’s priest dresses as a woman before performing the pooja. This is done to signify the fact that Goddess Parvathi herself is offering prayers to the Lord.

It is believed that Saint Arunagirinathar prayed to Lord Murugan here such that he might be protected from thoughts of lust. Lord Murugan acceded to his request and captured a demon that is believed to personify lust. This demon can be seen beneath Lord Murugan’s foot. Such a depiction of Lord Murugan cannot be seen anywhere else.

It is believed that Goddess Akilandeswari blessed poet Kalamega Pulavar here with the talent to write poems.

There are 9 Theerthams (holy water) in this temple. In front of the main deity, there is a grilled window with 9 holes in it. We have to worship the Lord only through these 9 holes. Doing so is considered to be equivalent to taking a dip in each of the 9 Theerthams.

There is a pillar in the “Mahamandapam” of Goddess Akhilandeswari’s temple where we can see a magnificent sculpture of Lord Ekapadeswarar.  The lord is flanked by Lord Brahma and Lord Mahavishnu on either side mounted on their respective vahanams.

Monolithic stone pillars can be seen in the halls (mandapam) situated at the third entrance of the temple (Aariyavittan tower). Another significant sculpture to be seen here is a huge chain carved out of stone.  There are also pillars where the 12 zodiac signs are beautifully engraved. The 1000-pillared hall houses a large number of intricately carved reliefs. 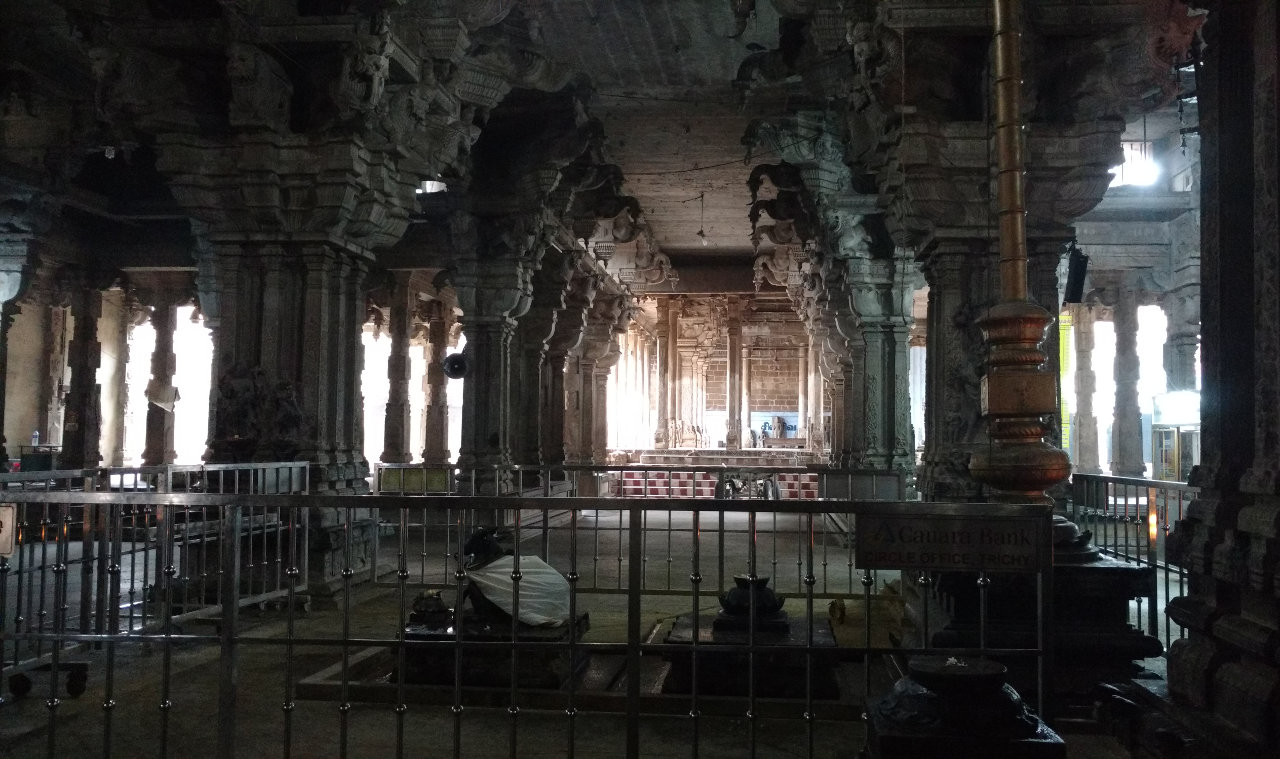 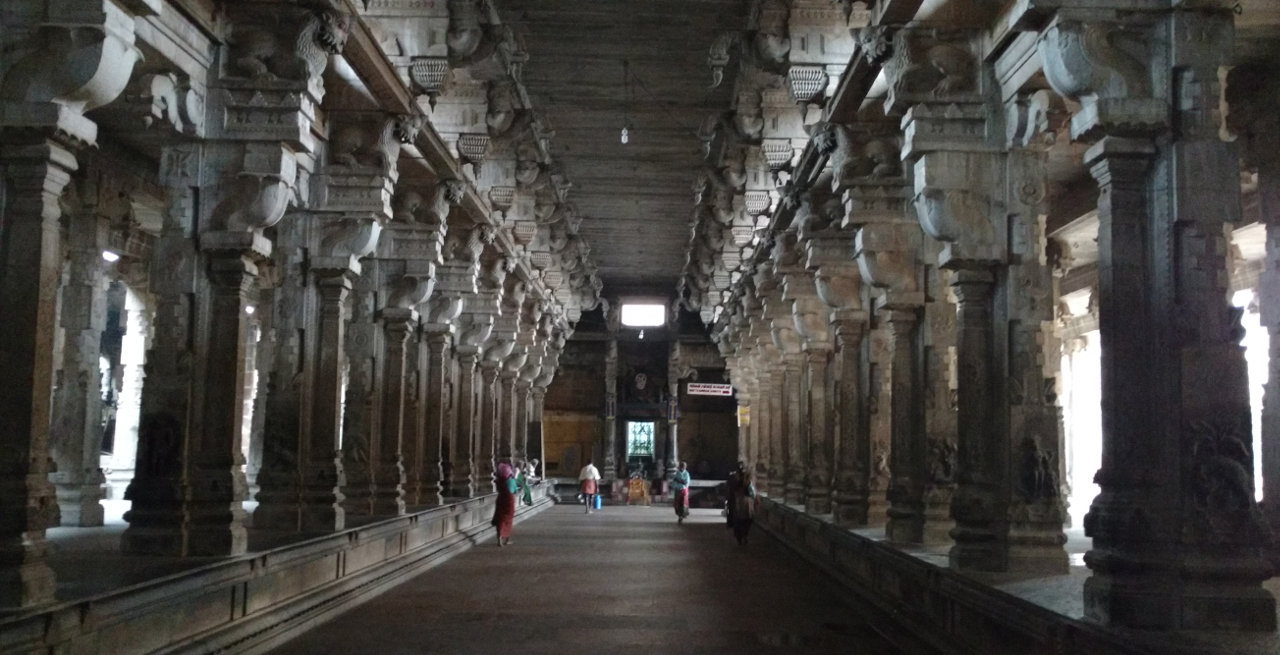 Devotees believe that by worshipping the lord here they would be relieved from their sins and can obtain salvation.

It is believed that by circumambulating the fifth corridor (known as "Thiruneetran Thirumathil”) one’s prayers will get fulfilled.

The important festivals celebrated here are –

10-day Vasantha Urchavam in the Tamil month of Vaikasi (May-June),

Aadipuram festival in the Tamil month of Aadi (July-Aug),

10-day Navrathri festival in the Tamil month of Purattasi (Sept-Oct), 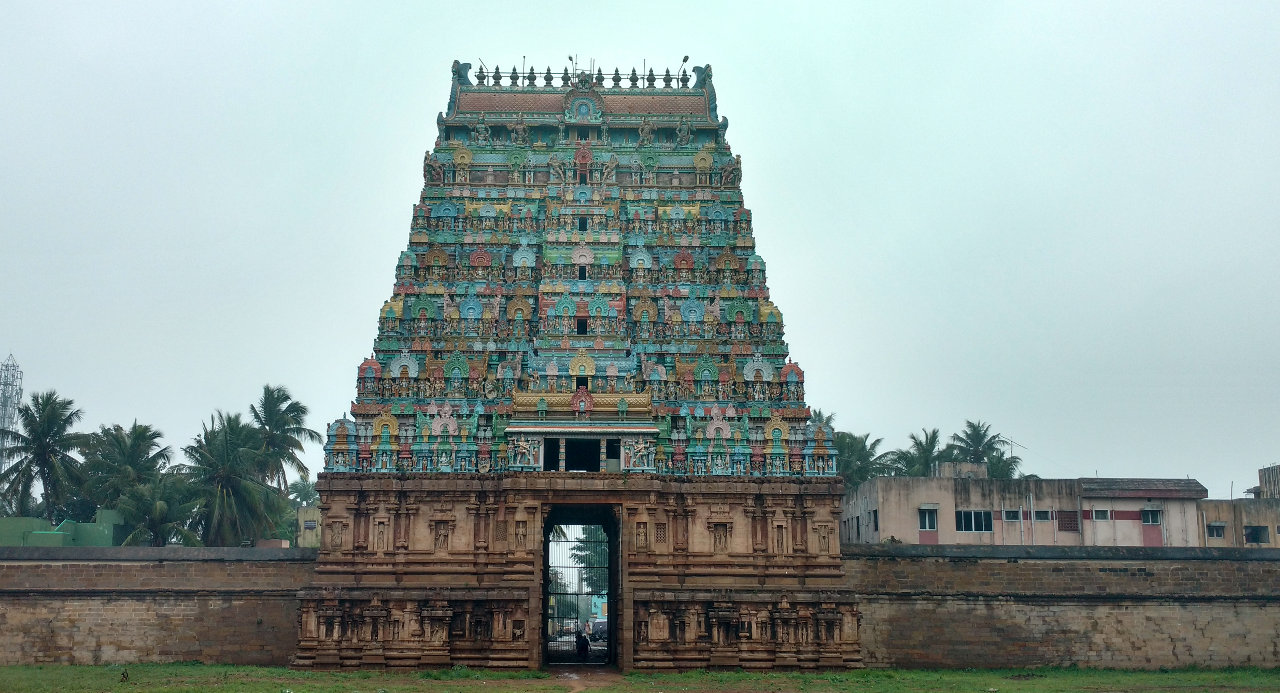 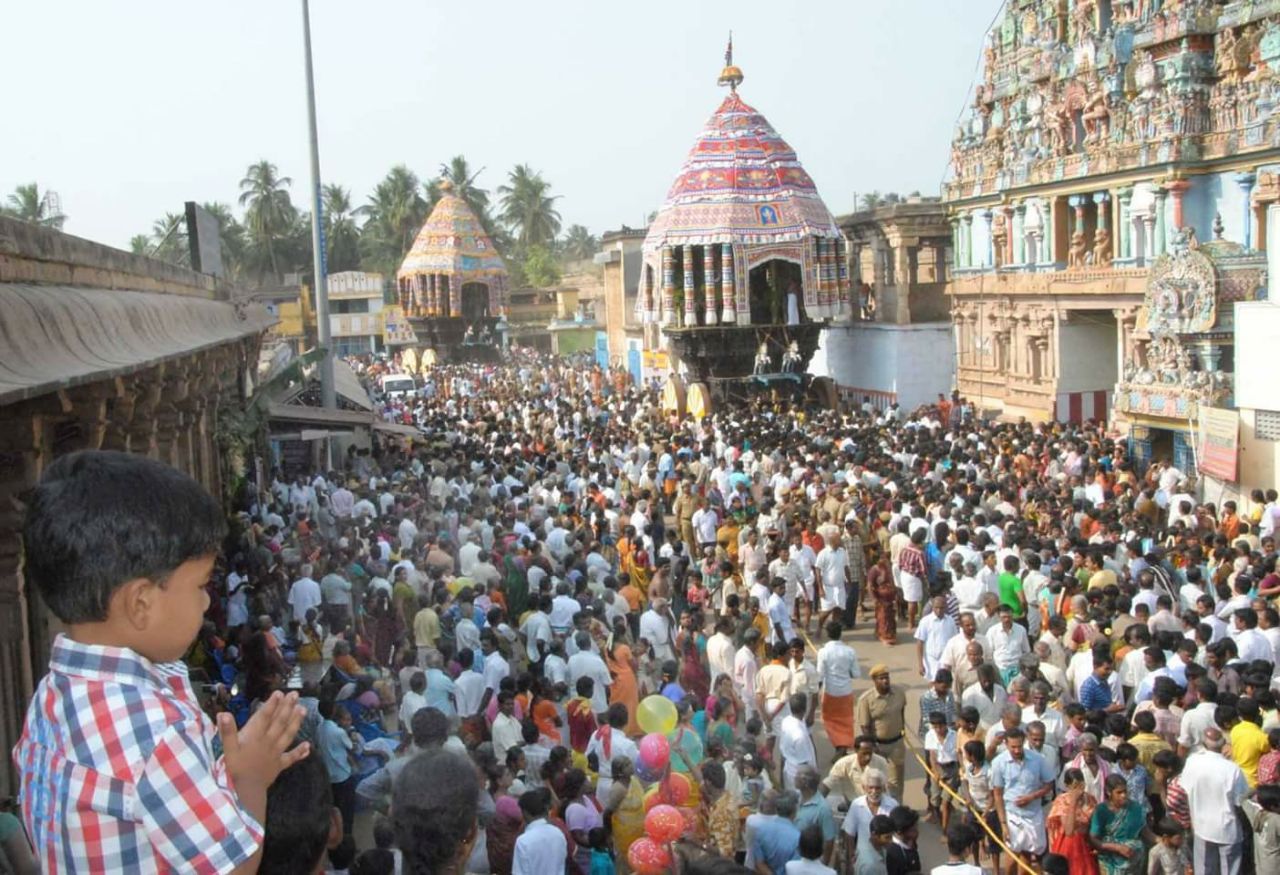