Thiruvavaduthurai is situated at a distance of about 20 kms from Mayiladuthurai. It is on the Mayiladuthurai – Kuthalam - Kumbakonam route. There is a small diversion road on the left side from Thiruvaalangadu leading to this temple. It is about one kilometre away from the main road. A beautiful arch can be seen at the entrance of the diversion road.

Nearest railway station is Narasinganpettai (3 kms) on the Mayiladuthurai to Kumbakonam railway line.

The stone inscriptions available in this temple are from the periods of the Chola Kings Paranthakan-I to Rajarajadevan. Other inscriptions dating to the period of Kings Mara Varman and Vikrama Pandiyan can also be seen. 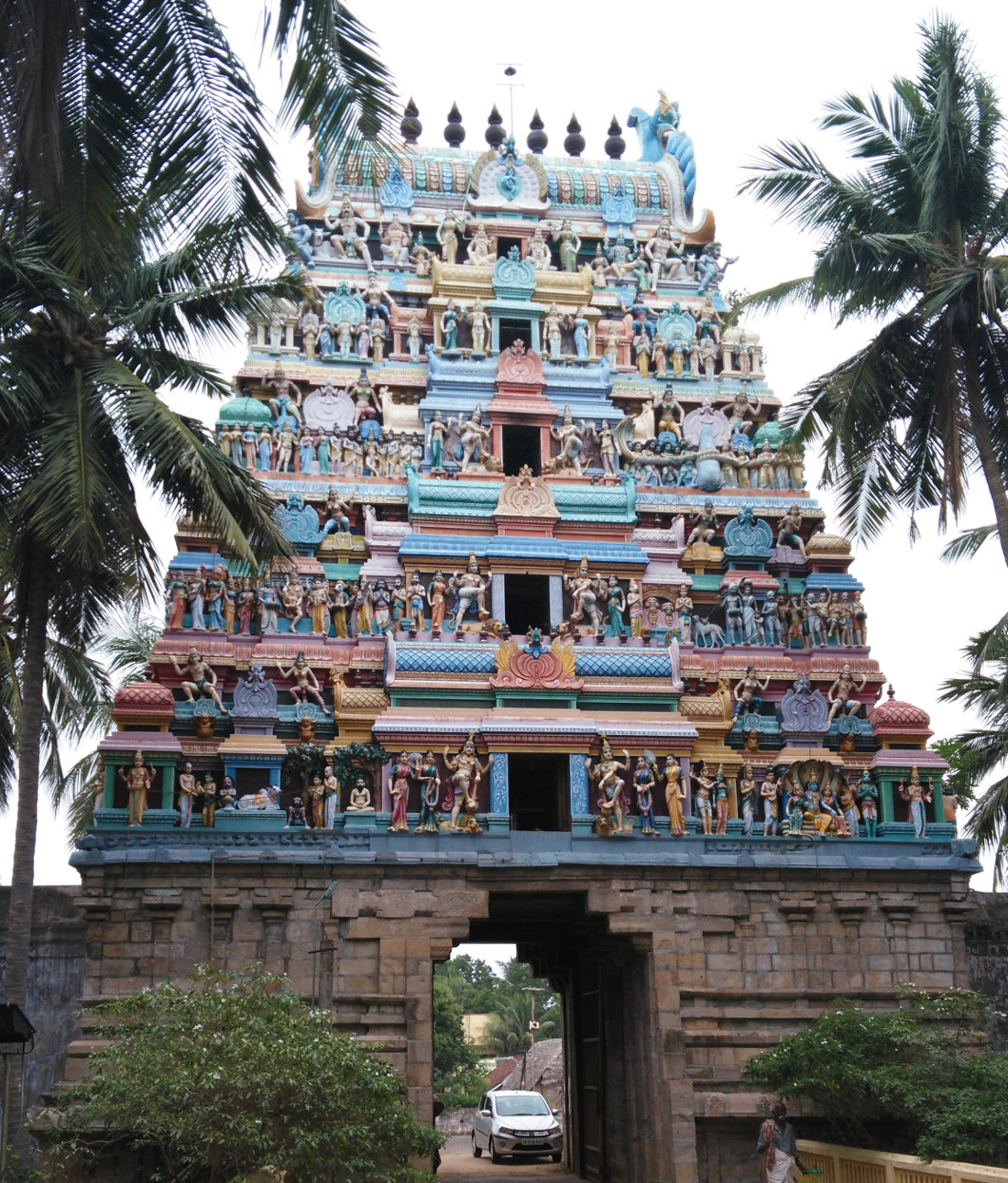 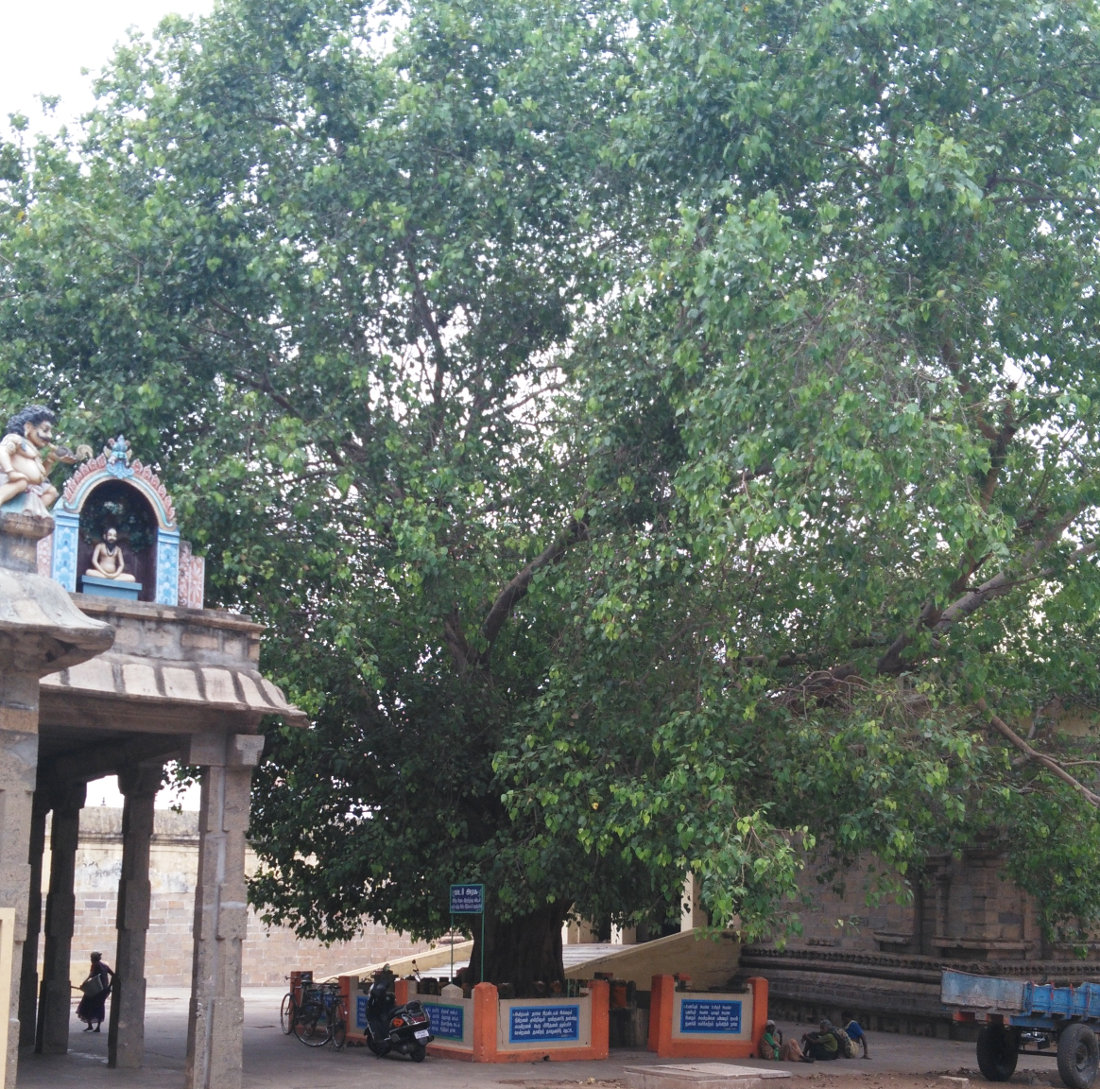 Thiruvavaduthurai enjoys a special place in mythology because it is linked to the legends of a few nearby Paadal Petra Shiva Sthalams.

Goddess Parvathi as a cow

The legend is that once Lord Shiva and Goddess Parvathi were playing a game of dice. At the end of each game, Lord Shiva intentionally made Goddess Parvathi win. After successive wins, her joy slowly turns into arroganace. Seeing her vanity and excessive pride, Lord Shiva cursed her to be born as a cow on earth. When she pleaded for pardon, Lord Shiva advised her that the curse will end after she performs penance at Thiruvavaduthurai.

Goddess Parvathi, in the form of a cow, worshipped Lord Shiva by pouring milk in form of an abhishekam on the lingam. Pleased with her penance, Lord Shiva appeared before her and lifted the curse.

By worshiping Lord Shiva here, Goddess Parvathy was relieved of the curse that had turned her into a cow. For this reason, Lord Shiva is praised here as “Sri Gomukti Easwarar” (“Go” means cow and “Mukti” means relief in Sanskrit). The name Thiruvavaduthurai is arrived at in the following manner – in Tamil, “Thiru” a respectful prefix, “Aa” means cow, “Adu” means remove and “thurai” means river bank (river Cauvery in this case).

Another legend associated with this temple is that of the Emperor Musukunda. The king was childless and was worshipping an idol of Lord Thyagesar which was presented to him by Lord Indira. One day, Lord Shiva appeared in his dream and advised him to come to this place for worship. It is believed that he visited this temple and worshiped the lord. Later he was blessed with a child.

It is believed that when Emperor Muchukunda came to this temple, Lord Shiva projected himself in the form of Lord Thyagarajar of Thiruvarur.

Sambanthar was staying in this place for a while with his father, Shivapada Hirudayar. Shivapada Hirudaya wanted to perform a yajna in Sirkazhi and asked his son to get him the resources for this purpose. Sambanthar sang a Pathigam of ten verses praying to the lord for gold and other materials needed for the yagna. Lord Shiva, through his Boothaganas (his securities), placed a purse of one thousand gold coins (“Porkizhi”) on the “balipeetam” (altar). The Boothagana informed Sambanthar that this purse is “Ulavaakkizhi” and it will forever remain filled with gold. Sambanthar gave the purse to his father to conduct the yajna. The “balipeetam” can still be seen in the temple surrounded by idols of the Boothaganas. It is believed that worshiping the lord from this spot in the temple would bring prosperity and wealth to devotees.

It is also believed that while taking the purse from the balipeetam, Sambanthar noticed a distinct smell of “Tamil Manam” (manam means smell in Tamil). He had received this power of being able to sense hidden treasures because of his rigorous worship. He asked the people to move the balipeetam. When they did so, they found Thirumoolar’s 3000 songs written on palm leaves. This came to be known as “Thirumanthiram”. 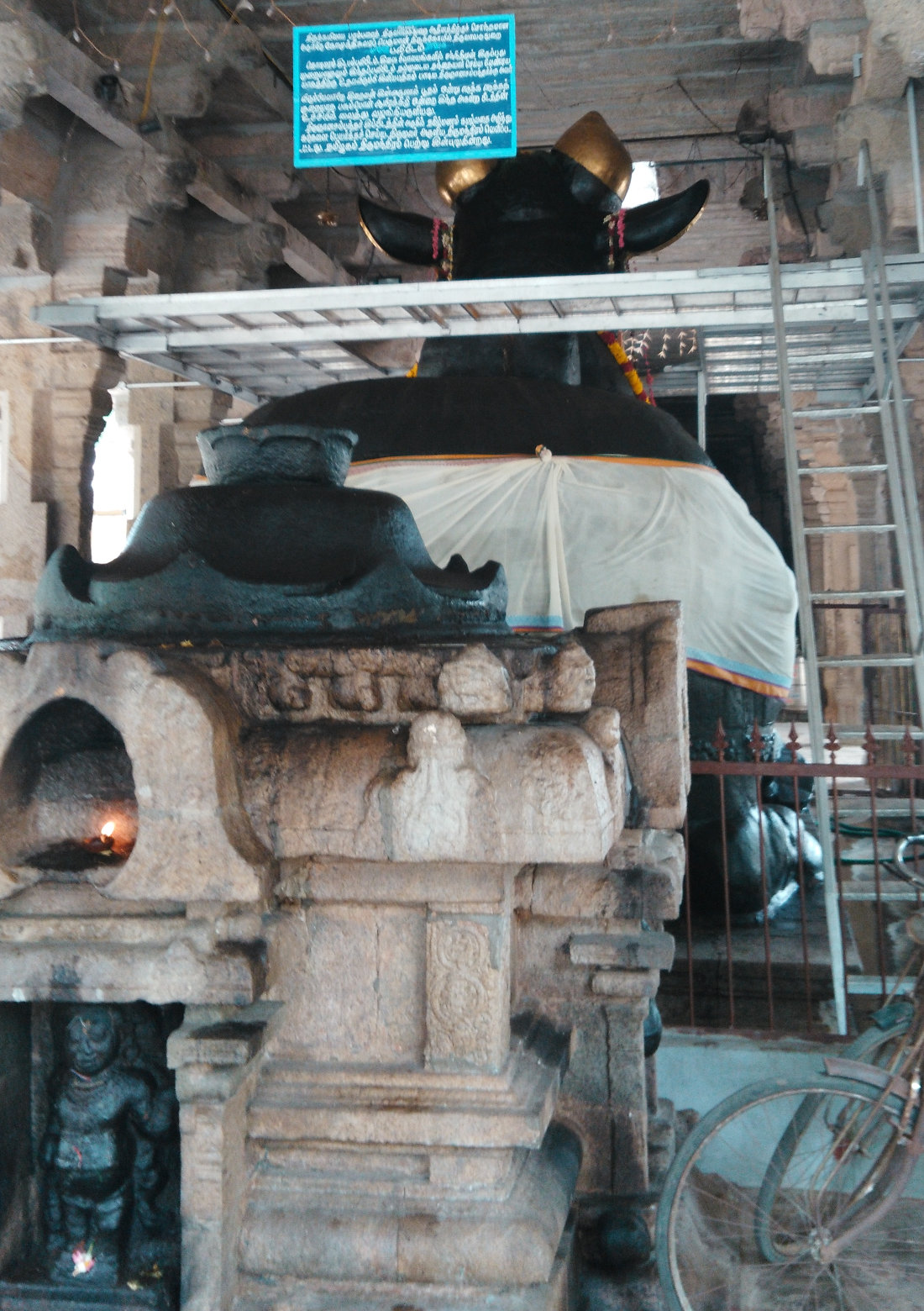 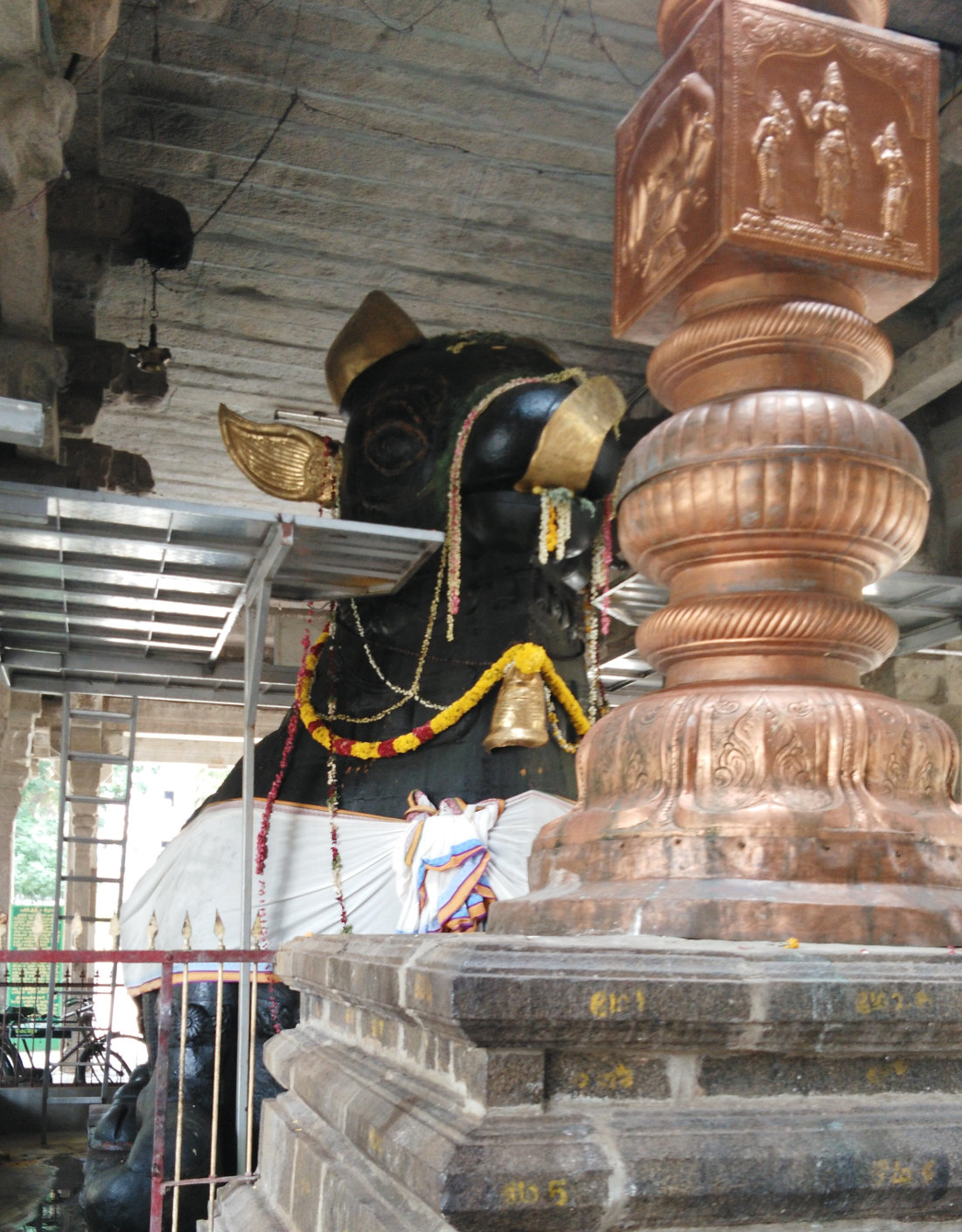 It is believed that Saint Sundarar visited this place en-route to Thiruvarur from Kancheepuram. When he visited this place, he was unwell. He prayed to Lord Shiva to relieve him from his illness. Lord Shiva blessed him and cured him. Sundarar then rendered a hymn praising the lord of this temple.

Another legend associated with this temple is that of Thirumaaligai Thevar - a staunch Shiva devotee and one of the 63 Nayanmars. He was born in an Adi Saivar (Gurukkal) family in Thiruvidaimaruthur, near this place. He was a scholar and served as Guru (teacher) to various Chola kings. However, he decided to renounce his material life and turn to spirutuality and ascetism. He came to Thiruvavaduthurai and started his penance under the peepal tree.

He is also considered to be one of the disciples of Saint Bogar. With the blessings of Lord Shiva and Goddess Parvathy, he got various divine powers.  Believing some baseless allegations against him, King Narasingan sent his soldiers to attack him. It is believed that using his divine powers, Thirumaligai Thevar directed all the Nandhis from the temple’s compound wall to drive away the soldiers.  For this reason, we cannot see any sculptures of Nandhi on the compound wall. It is also believed that he once made a dead man walk to the cremation ground. Also, it is believed that he made the Chidambaram car (Ther) run again after it had gotten stuck.

All the Nandhis of this temple are believed to have merged together and become one big Nandhi, which can be seen in front of the lord. The height of this Nandhi is about 15 feet. There is also another smaller Nandhi in front of the big one.

The place where Thirumaaligai Thevar lived is presently the Thiruvavaduthurai Mutt.  There is a shrine for him (his burial place - “Samathi”) inside the Mutt.

A Shivayogi called Sundaranathar came to Earth from Mount Kailash, the abode of Lord Shiva. He was one of the students of Nandhi Devar. He was visiting various Shiva temples in the country and wanted to meet Sage Agasthiyar. Near this place, he found a shepherd named Moolan who was lying dead and the cows around him were in grief. Sympathizing with the cows, he entered into the body of the shepherd using his yogic powers (“Parakaya Pravesam”) and took the cows to their home. He then began his penance under a peepal tree in this place. Moolan’s relatives, especially his wife, asked him to return home. But he refused to do so. His relatives realised that he had attained the divine wisdom and advised his wife to leave him alone.

The saint later came to be known as Thirumoolar. Thirumoolar, while performing his penance, composed his Thirumanthiram under this tree. He would wake up from his penance once in a year and sing a song that was rich in philosophical musings and then go back to his penance again. Like this, it is believed that he sung 3,000 songs over a period of 3,000 years. This was compiled as “Thirumoolar Thirumandhiram” which forms 10th volume of the twelve volumes of Thirumurai (Panniru Thirumurai). His shrine (Jeeva Samadhi) can be seen in the corridor (prakaram) where he is believed to have attained salvation and reached Lord Shiva’s abode. He became one of the 63 Nayanmars and one of the 18 reverred Siddhars. Saint Thirumoolar was praised by Saint Sundaramurthy Nayanar as “Nambiran Thirumoolan adiyarkkum adiyen” in his “Thiruthondar Thogai”. 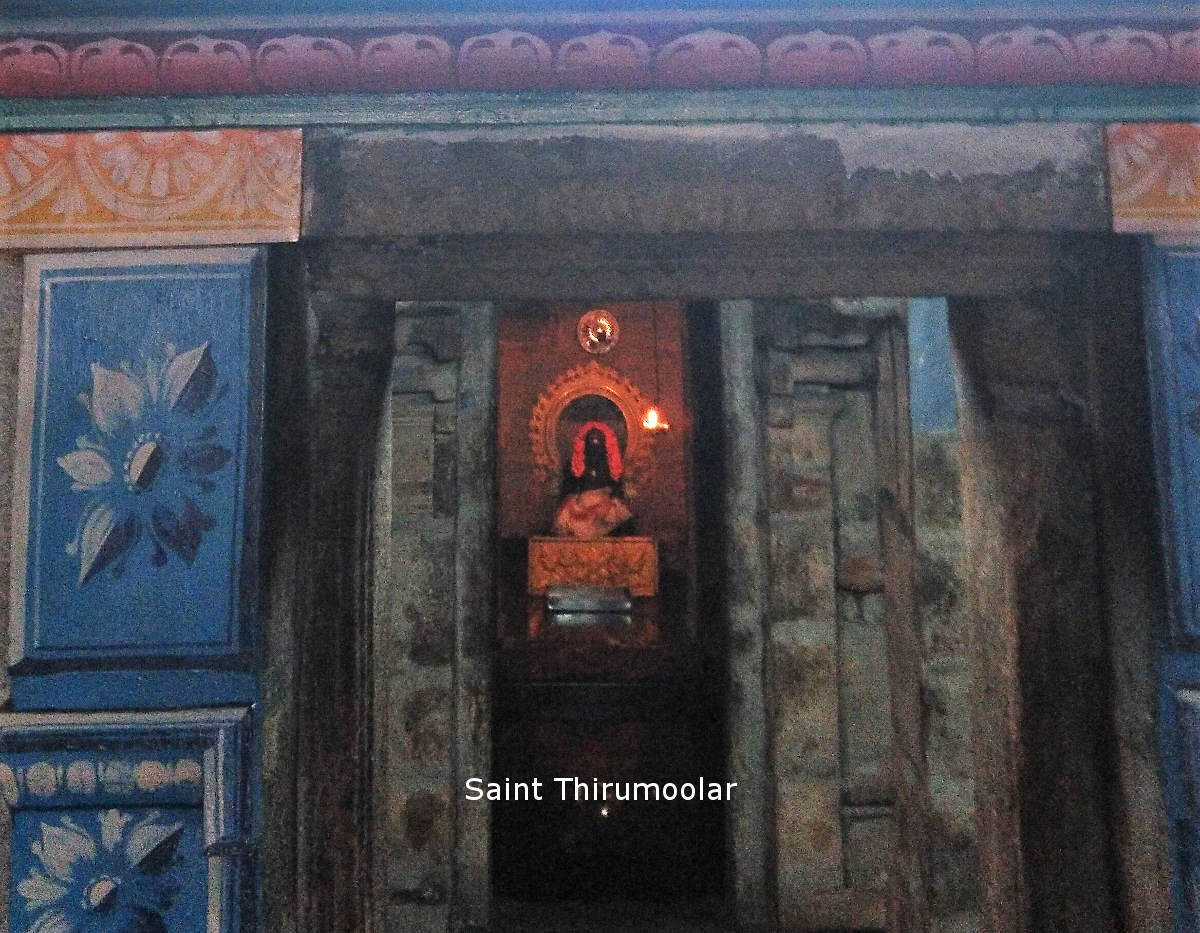 It is believed that the “Navakoti Siddhars” including Bogar had performed penanced here and were taught the 8 yogic powers (Ashtama Siddhis) by Lord Shiva.

It is believed that emperors from three different kingdoms - King Cheraman Perumal (one of the 63 Nayanmars) from Chera dynasty, King Kochenget Cholan from Chola dynasty and King Vikrama Pandian from Pandiya dynasty have worshiped the lord here. Also, they have contributed to the renovations of this temple.

Lord Yama, also referred as Dharma Devta, is believed to have worshiped Lord Shiva here. Lord Shiva blessed him and gave him the honour of taking the place of his bull mount here.

At the entrance of the main tower, on either side, idols of Lord Vinayakar and Lord Murugan can be seen. It is believed that both Vinayakar and Murugan escorted Goddess Parvathy to this temple when she was in the form of a cow. 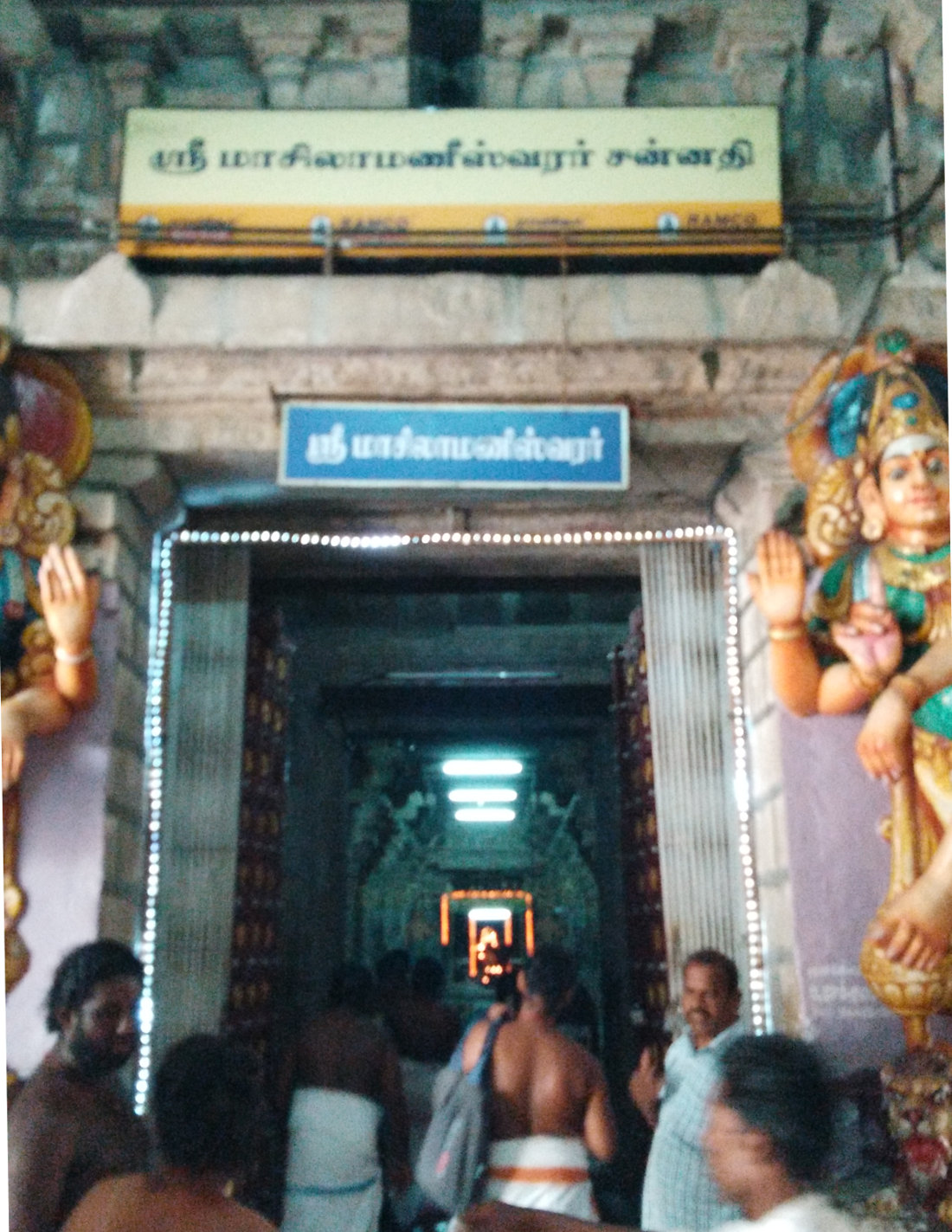 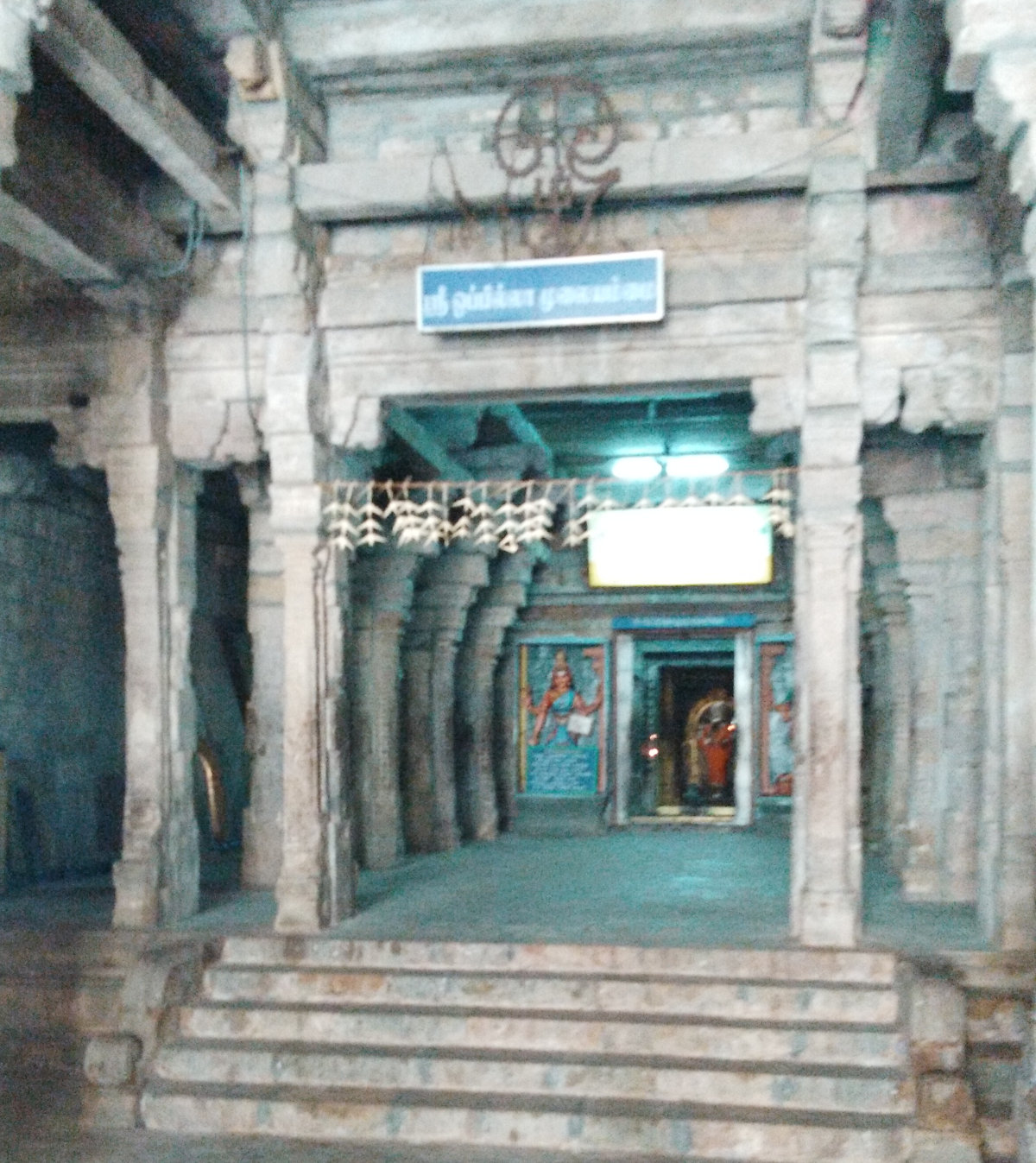 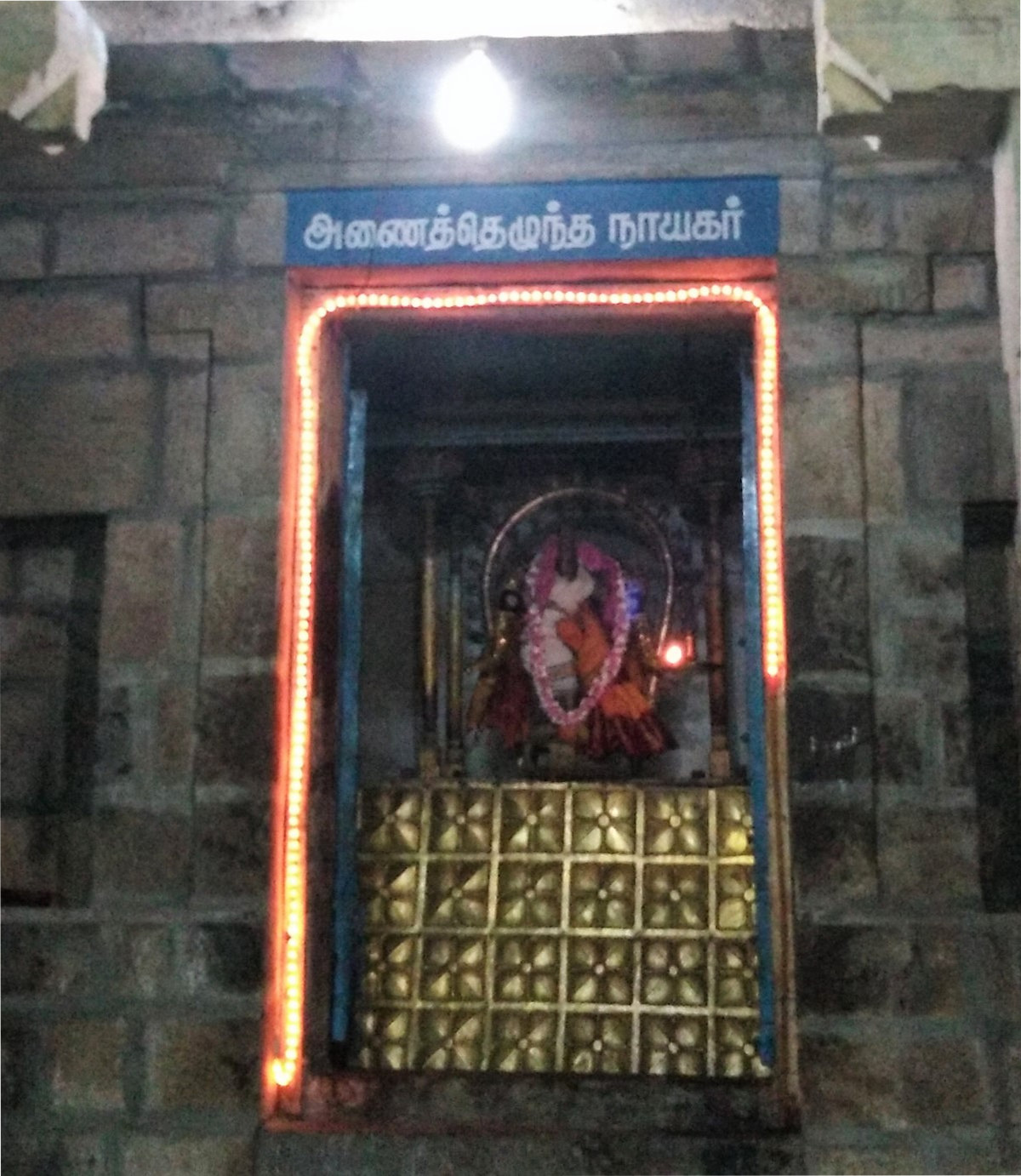 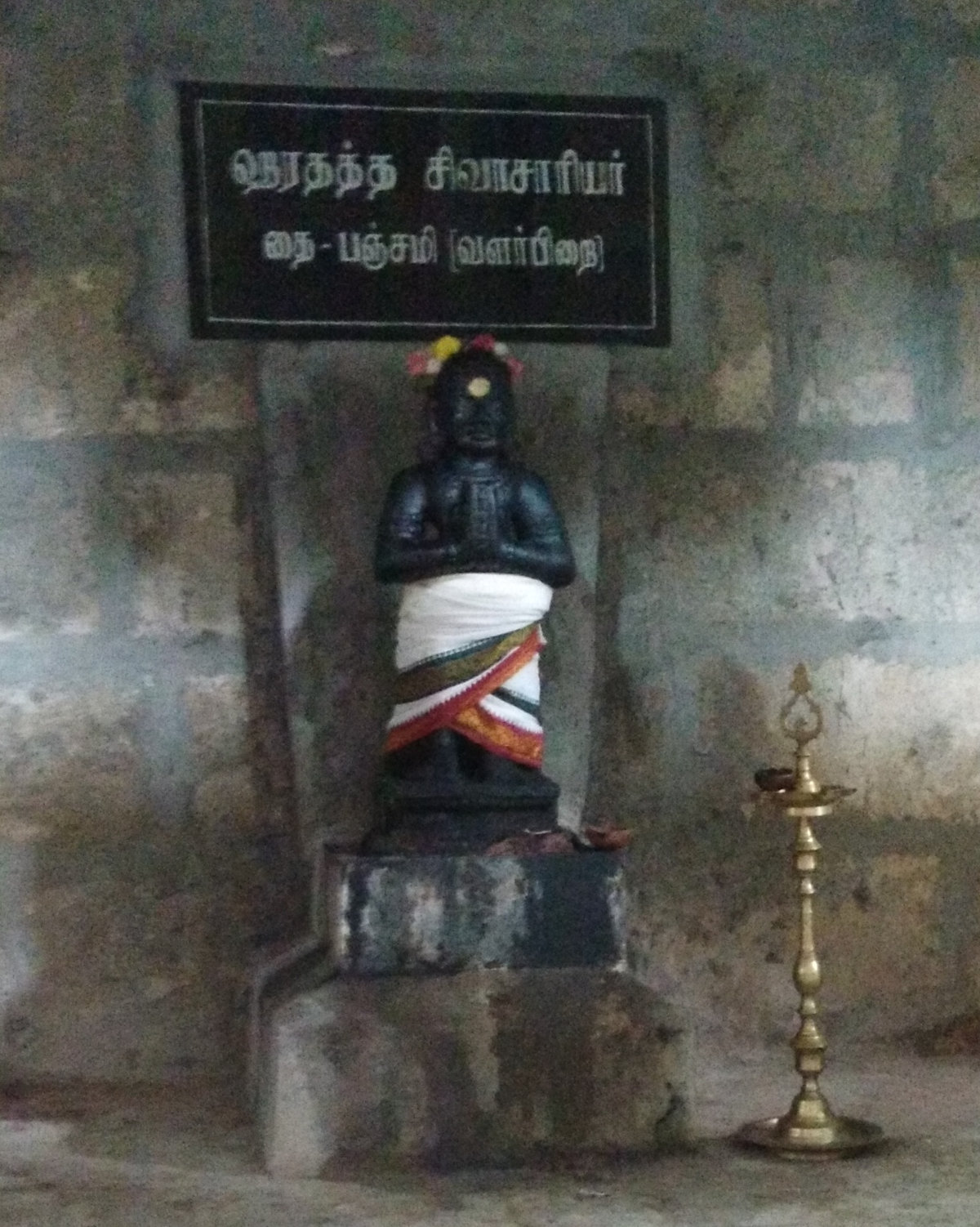 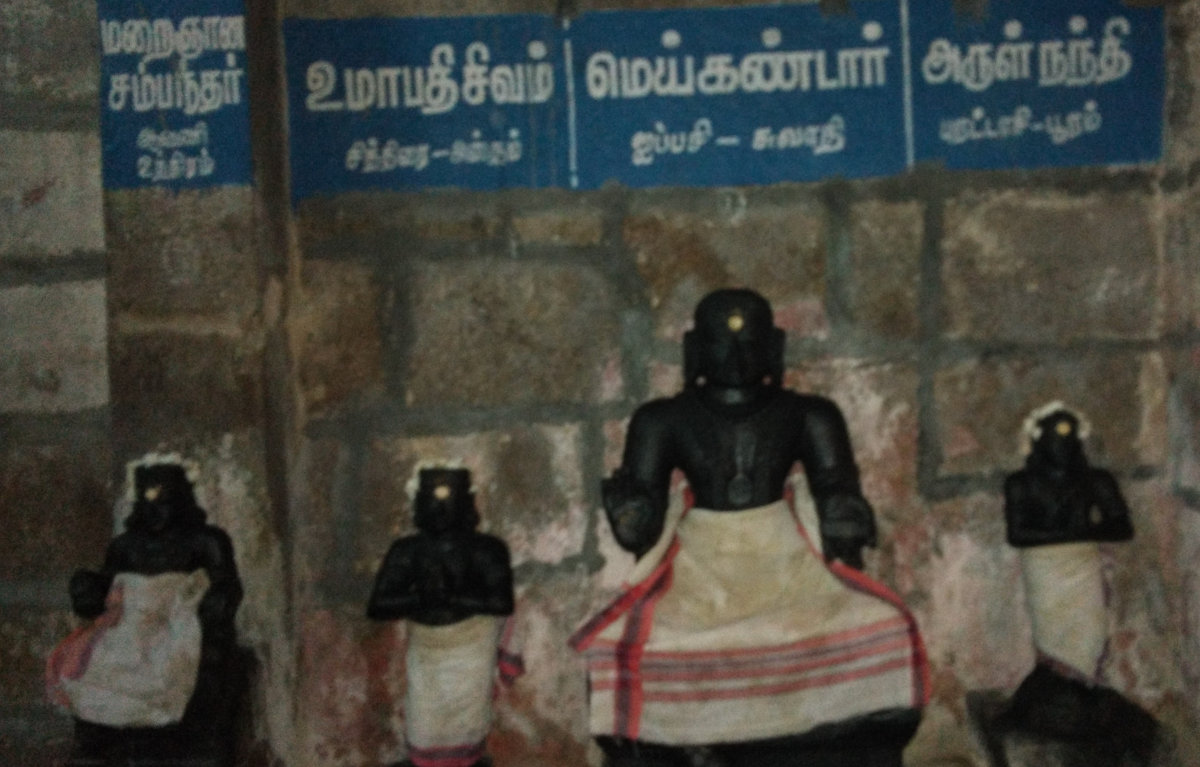 The procession idol of “Sri Anaiththezhundha Nayakar” depicts the lord as embracing Goddess Parvathy. Though the name suggests embraced, the idol is made in such a way that the hands of the lord did not touch goddess’s body.

Lord Shiva is believed to have performed his “Mahathandavam” dance here. It is also known as “Sundara nadanam”.

In his hymn, Saint Thirunavukkarasar mentioned about Lord Shiva’s gift of a purse containing gold coins to Saint Thirugnanasambanthar.

Arasamaram (peepal tree), the sacred tree of this temple is believed to be very old and is seen as a representation of the Devas (celestial gods). Lord Shiva is believed to have emerged from under this tree and blessed the Devas.

Sri Vinayakar of the temple is praised as Lord Thunaivandha Ganapathi as he escorted his mother. “Thunai vantha” means escorted in Tamil.

There is a statue in the corridor depicting the legend of Goddess Parvathy, in the form of a cow, performing abhishekam on a Shivlingam. This is known as “Sri Goroopambigai”. 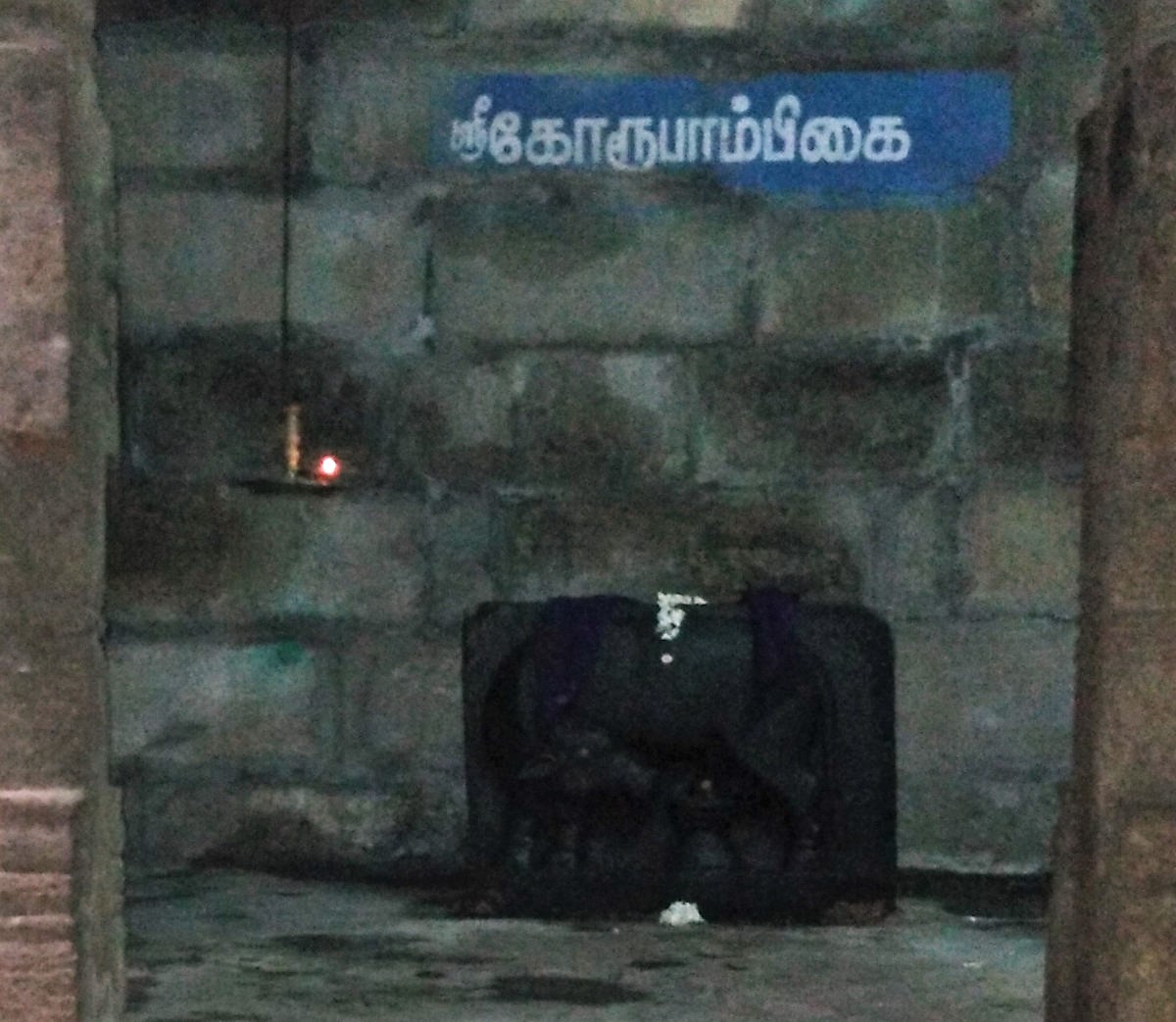 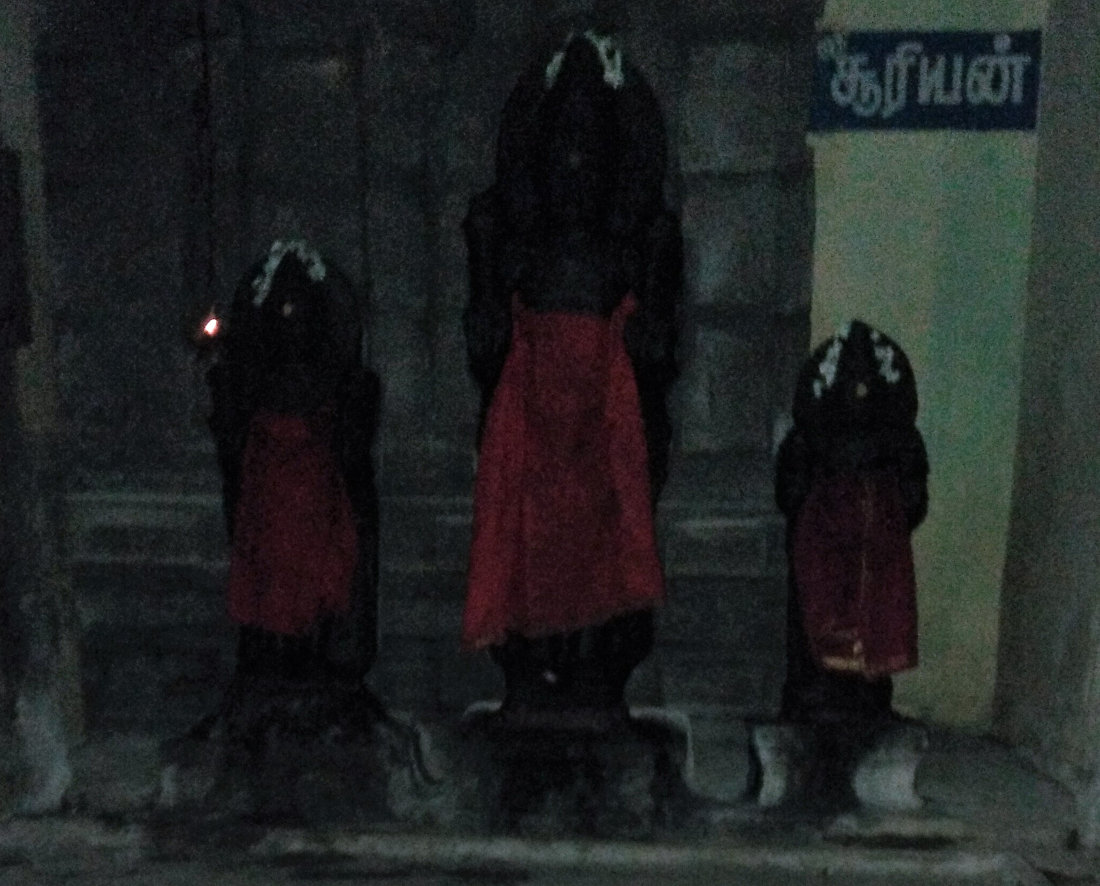 The lord of this temple is praised in Thiruvasagam and Thiruvisaippa also (parts of 12 Thirumurai).

Beautiful stone reliefs of King Narasingan and his minister can be seen either side of the Nandhi Mandap.

Of the various sub-temples (“Parivara Sthalams”) relate to Thiruvidaimarudur, this temple is considered as Nandhi Sthalam. Worshiping the Nandhi here is considered to be very auspiious.

Women pray for the safety and longevity of their husbands. It is also believed that worshiping Lord Shiva here will result in the reunion of estranged couples.

Since King Musukunda was blessed with a child, it is believed that those seeking “santhana prapthi” (child boon) can pray to the lord here.

Devoees can also pray to this lord for removal of obstacles from their wedding proposals.

Thiruvadhirai in the Tamil month of Margazhi (Dec-Jan);

Maha Shivrathri in the Tamil month of Maasi (Feb-Mar); and

Rathasaptami is celebrated in the Tamil month of Thai (Jan-Feb) in a grand manner. On the 5th day of this festival, the event of Sambanthar receiving the golden purse is celebrated. 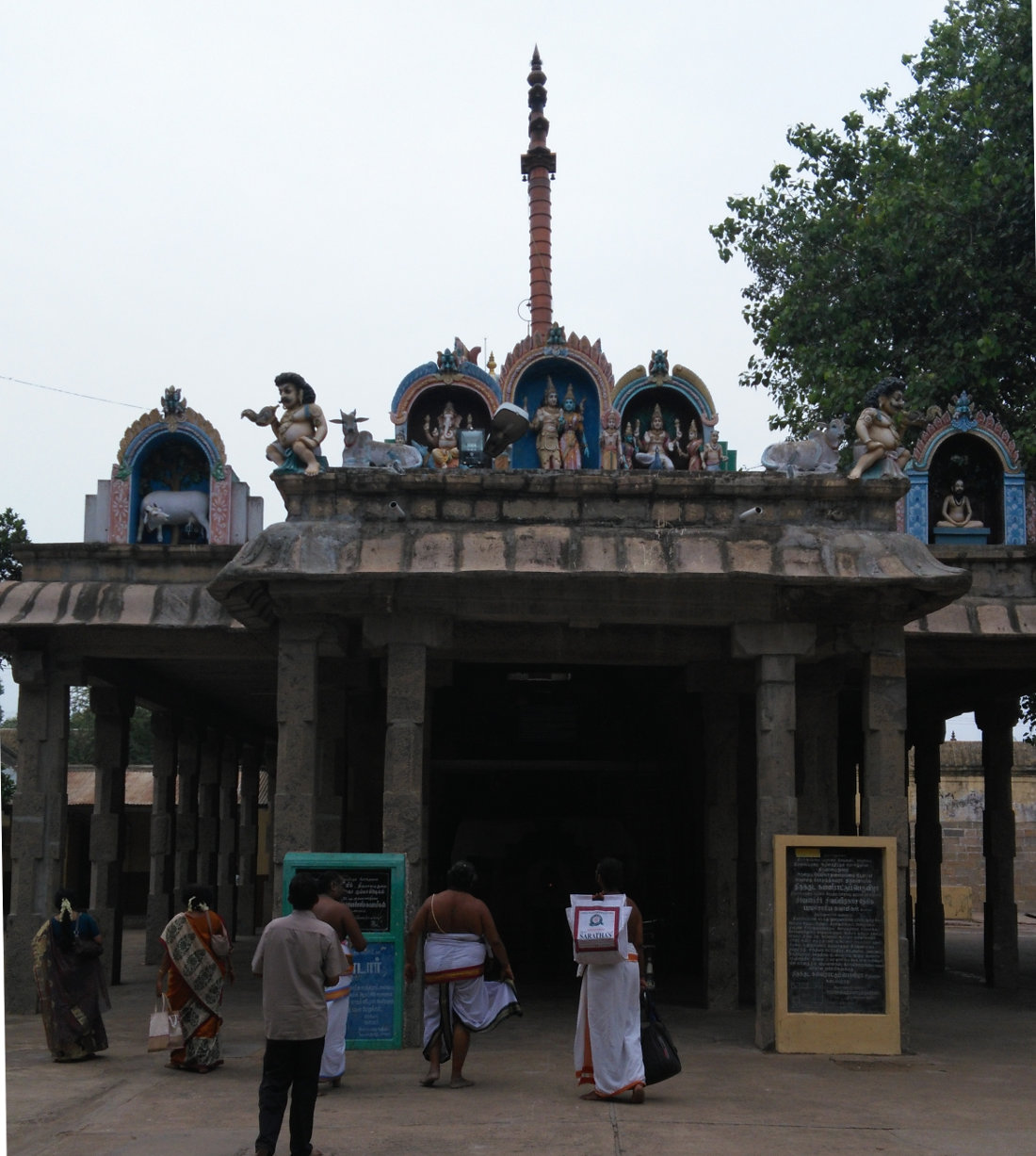 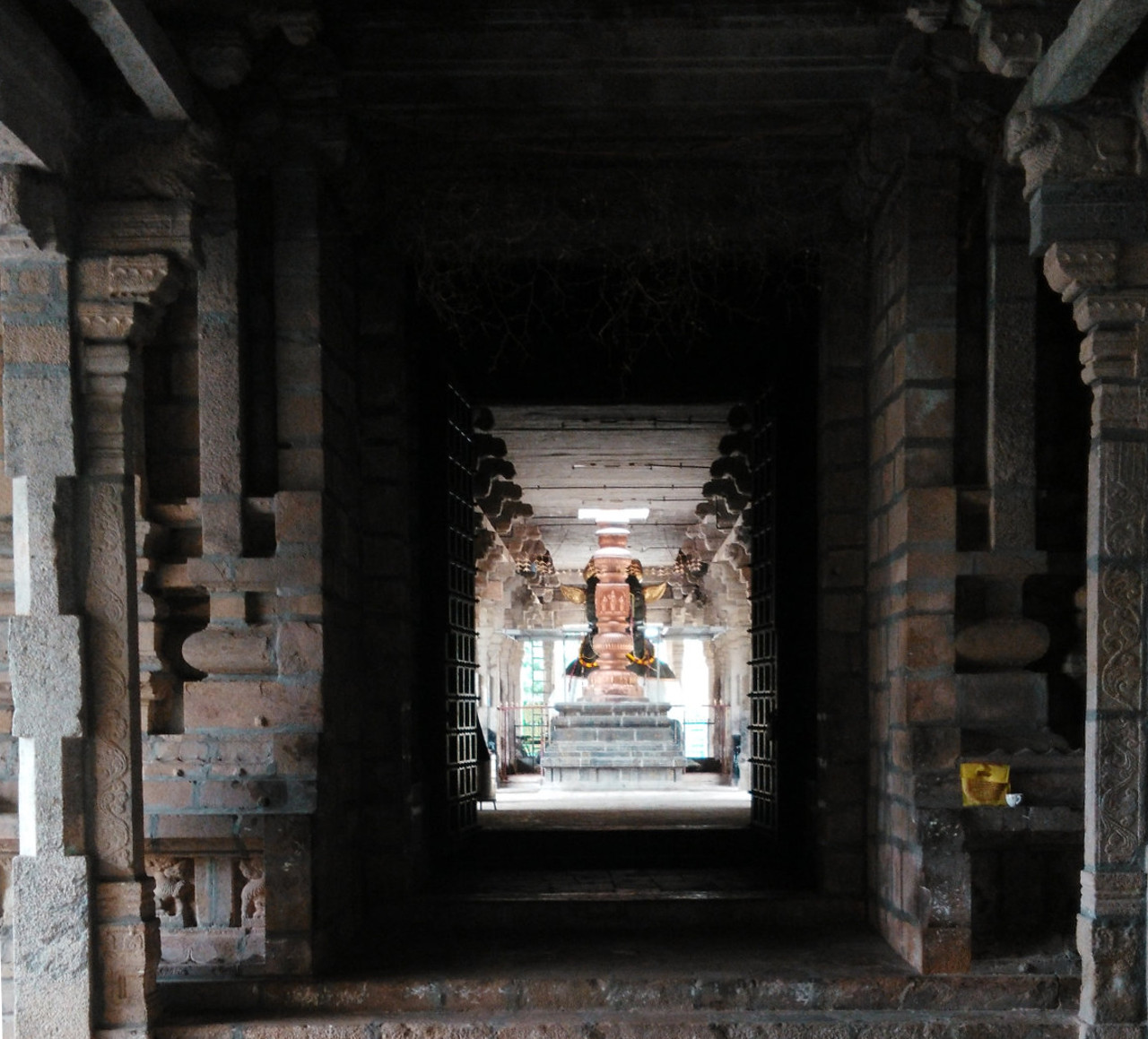 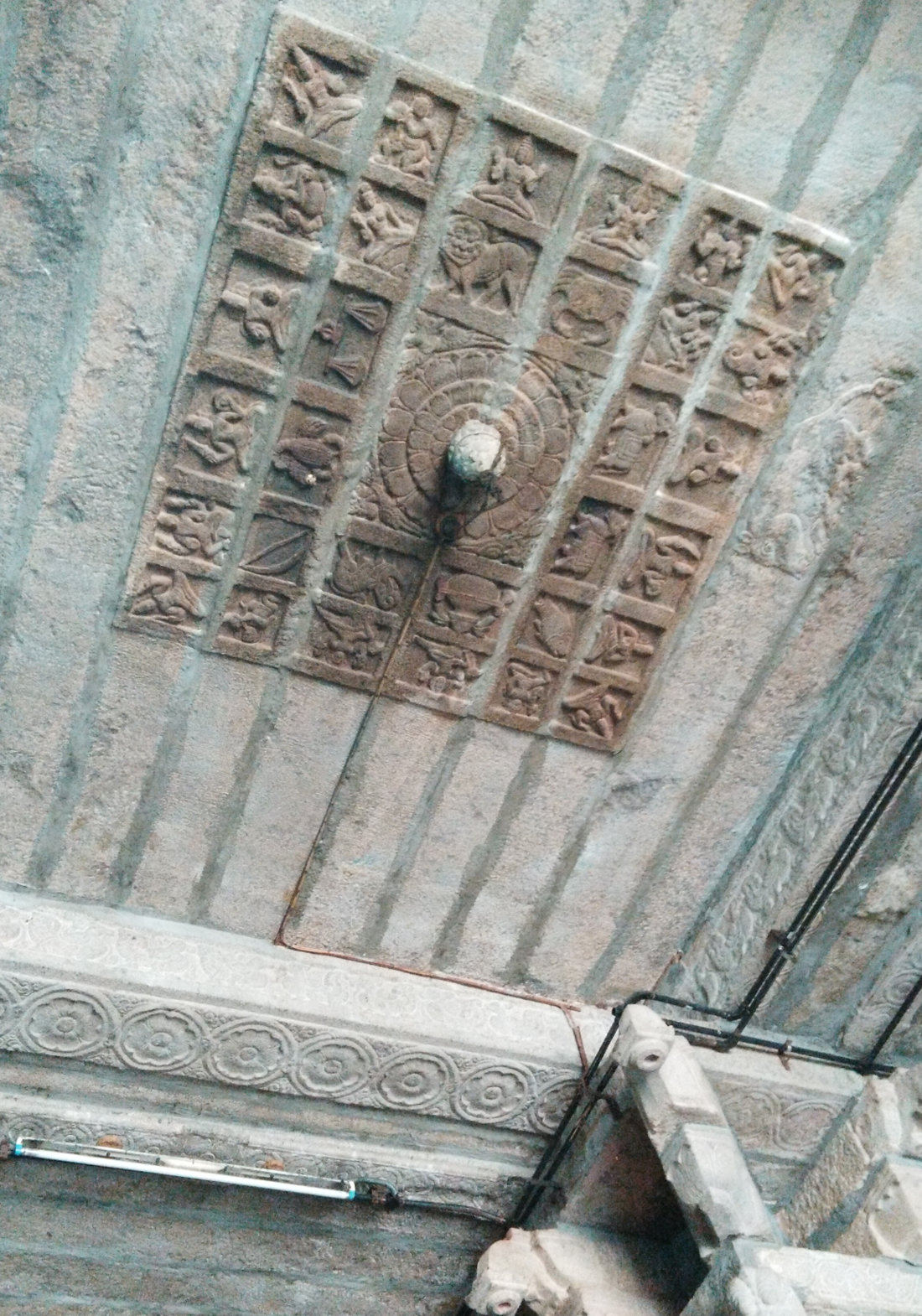