Thiruppaigneeli is situated at a distance of about 20 kms from Trichy.

This ancient temple is situated on the northern bank of the river Kollidam. This temple complex is spread over sprawling 12 acres of land.

The temple’s main tower is believed to have been built by King Konerinmai Kondaan and it is only constructed up to the first tier. 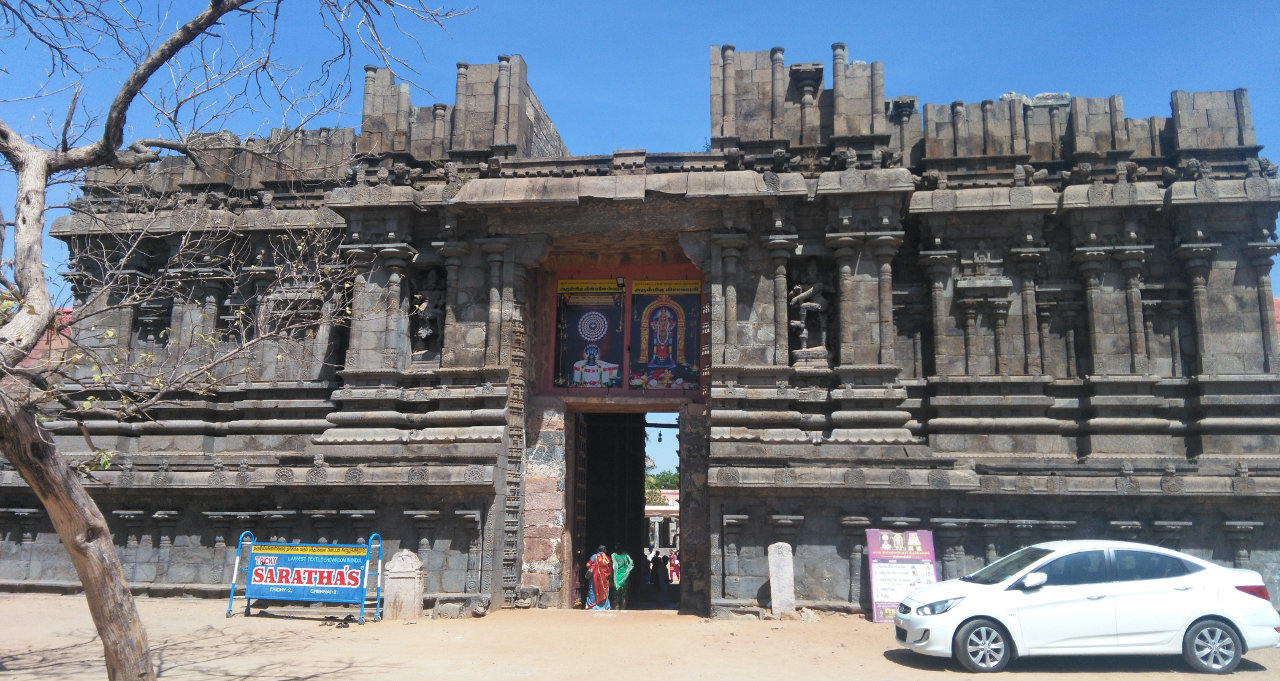 The stone inscriptions available in this temple date back to the periods of Chola kings Rajendran, Rajathirajan, Rajarajan and Konerinmai Kondaan.

Lord Yama’s shrine is in the form of a cave (“Gunabaram”) and is said to have been constructed by King Mahendra Varma Pallava in 640 AD.

As per the sthala puranam, Lord Shiva reinstated Lord Yama here after he was vanquished in order to save Markendaya’s life in Thirukadaiyur. The legend is that after Lord Yama’s death, his work had stopped and there was no one to take care of the cycle of life and death. Lord Mahavishnu, Bramha, Bhoomadevi, and Devas came to this temple and urged Lord Shiva to give rebirth to Yama. Lord Shiva gave rebirth to Yama on the day of Thai Poosam and gave him the powers to restart his work. Hence the lord here is praised as “Sri Adhikaravallavar (“athikaram” means power in Tamil).

Inside Lord Adhikaravallavar’s shrine, Lord Shiva and Goddess Parvathi can be seen along with Murugan in between them as Somaskantha. Lord Yama can be seen in the form of a child under Lord Shiva’s feet. Near the ceiling, on either side of Lord Shiva’s idol, Suryan and Chandran can be seen fanning the lord with a “Samaram”. This shrine is known as “Yama Dharmaraja” temple. 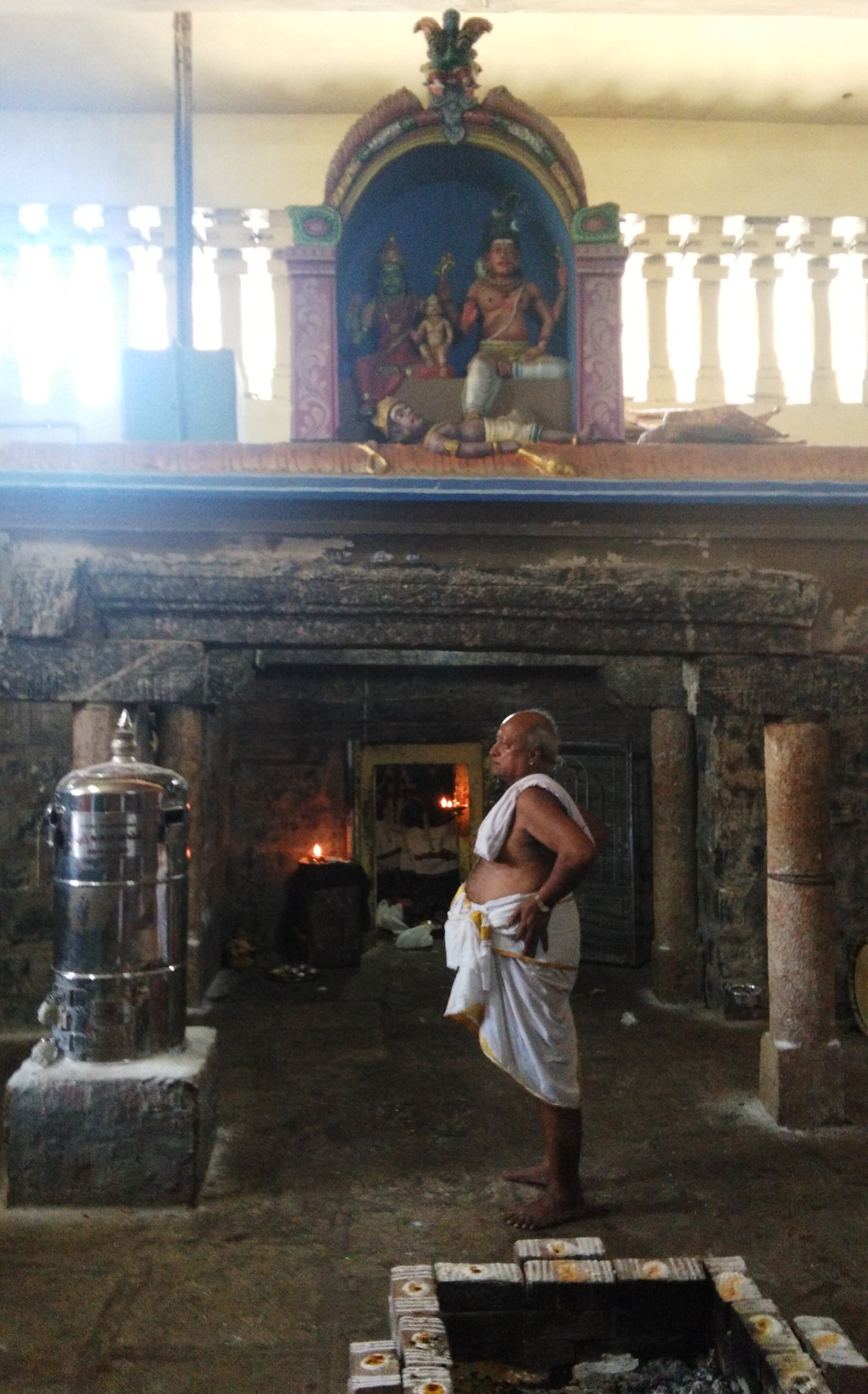 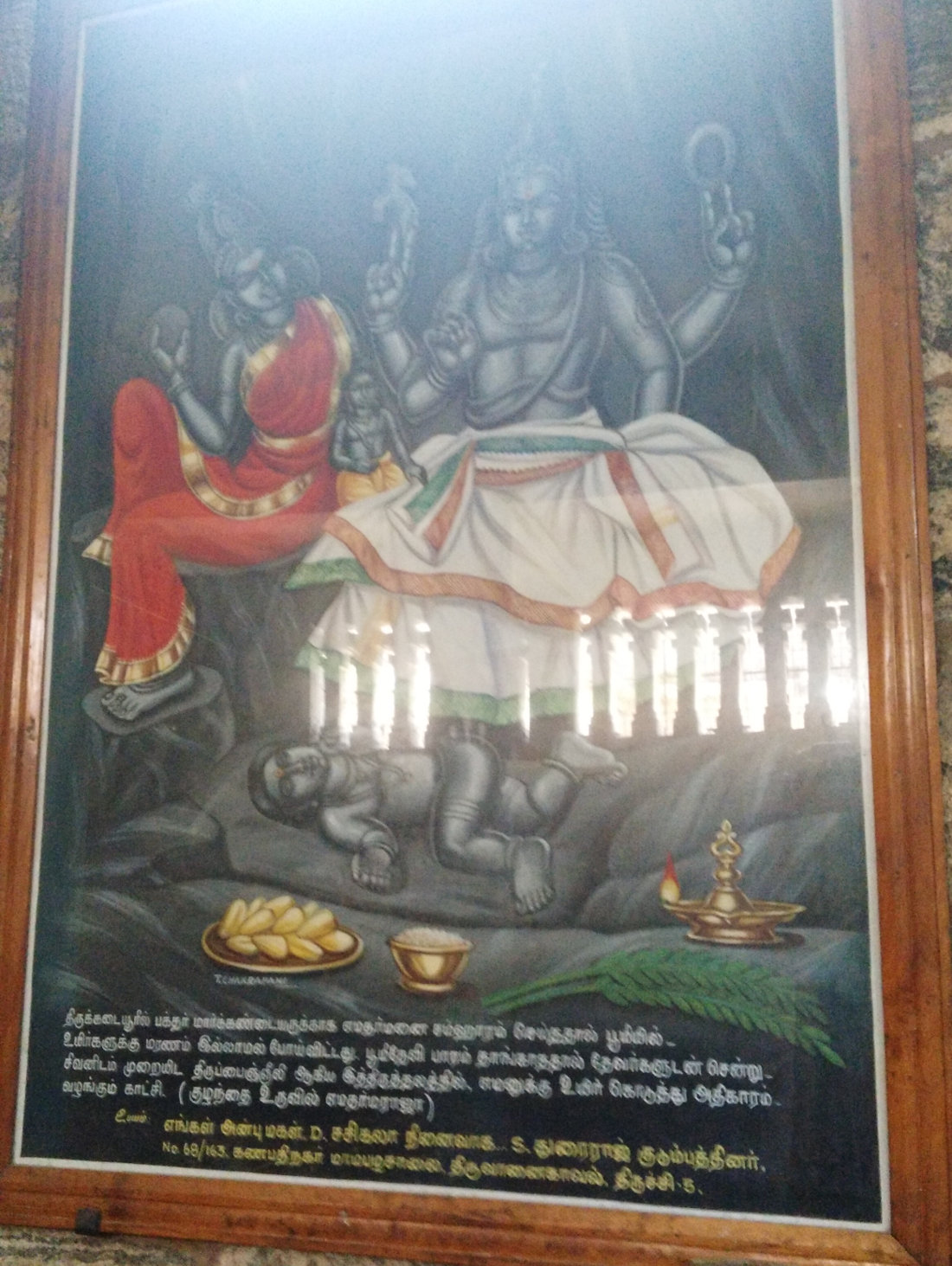 According to legend, sages Viyakirapathar and Pathanjali went to Mount Kailash to see Lord Shiva’s dance but the lord directed them to go Chidambaram instead.  In Chidambaram, it is believed that the lord gave his Nataraja dharisanam on the day of “Thai Poosam”. The place where he performed his dance is known as Rathina Sabha.

When sage Vashistar came to know of this incident, he reached Mount Kailash and requested Lord Shiva to give him the opportunity to watch his dance. Lord Shiva advised him to go to “Gneelivanamakiya Thiruppaigneeli”. When he reached this place, Sage Vashistar was blessed with Lord Shiva’s dance performance in this temple. There is a Rathina Sabha in this temple also. This temple is also known as “Melai Chidambaram”.

It is believed that Lord Ram visited this temple on the advice of Sage Vashistar to worship Lord Shiva before going to Lanka.

It is believed that Goddess Parvathi visited this place and worshiped the lord. The Seven virgins (Saptha Kannikas) - Brahmi, Maheshwari, Gaumari, Vaishnavi, Varahi, Indrani and Chamundi came to this place before their wedding to seek the darshan of Goddess Parvathy. The goddess appeared before them and blessed them that they would be married soon to suitable grooms. The goddess also granted them the boon of staying here in the form of plantain trees to continually receive her darshan. Accordingly, they left their worldly form here in the form of plantain trees which then became the “sthala viruksham” of this temple. 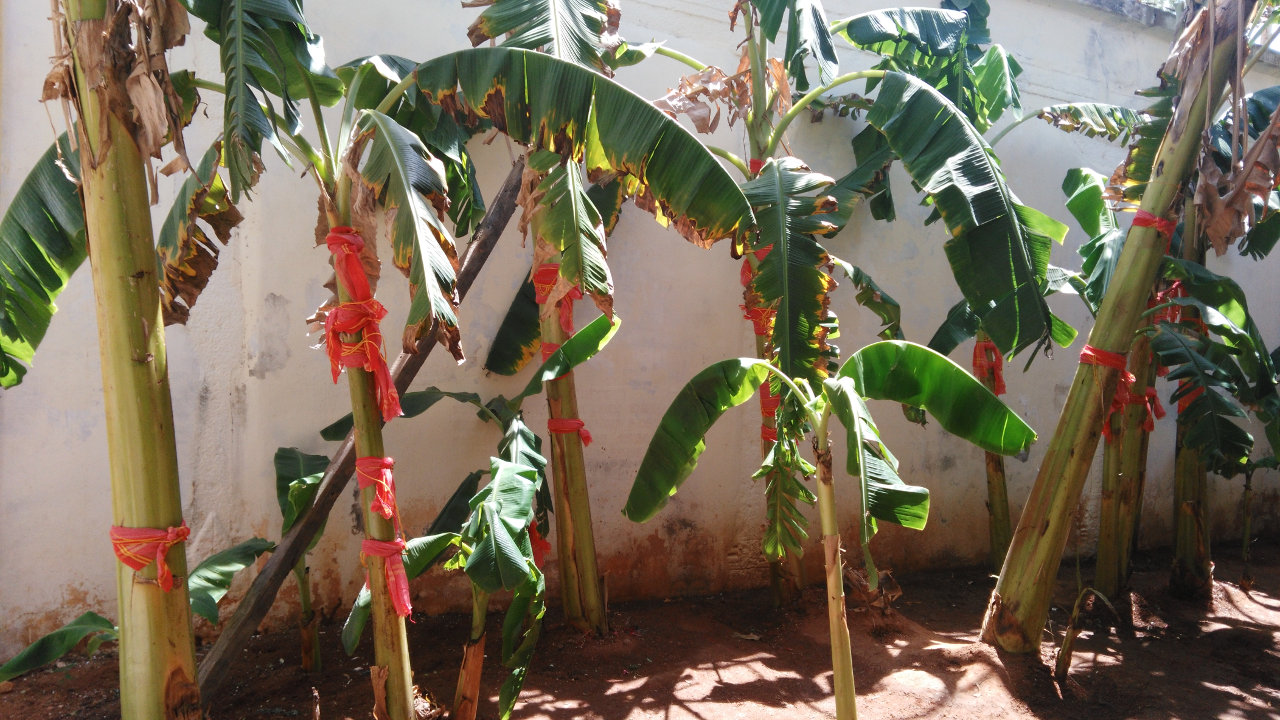 As per mythology, Adhisheshan (the serpent on whom Sri Mahavishnu rests) and Vayu (lord of the winds) fought among themselves frequently to test their superiority. During one such struggle, Adhiseshan encircled Mount Kailash and Vayu tried to break his hold by creating a “santamarutham” (Tornado). Because of this tornado, 8 parts (“Kodumudigal”) fell from Mount Kailash into 8 different places on the earth. These places are - Thirugonamalai, Thirukalahasthi, Thiruchiramalai, Thiruenkoimalai, Rajathagiri, Neerthagiri, Ratnagiri, and Swethagiri. Swethagiri is known as Thiruppaigneeli. As this place is believed to have originated from Mount Kailash, it is called “Then Kailasam” (“then” means South in Tamil).

Saint Thirunavukkarasar (Appar) was on his way to worship Lord Gneelivana Nathar in Thiruppaigneeli. However, due to the oppressive heat, he became exhausted and hungry. A priest appeared before him and asked him where he was going. Appar replied that he was proceeding to Gneelivana Nathar’s temple. Noticing how tired and hungry Appar was, the priest offered him the rice (“kattamudhu”) which he was carrying. He also told him to take water from a tank nearby.  He further told Appar that he would take him to the temple. After Appar ate the food, both of them proceeded to the temple.

As soon as they reached the temple, the priest disappeared and Lord Shiva gave him dharshan along with Goddess Parvathi seated on his bull mount (Rishaba Vakanam). Hence Lord Shiva here is also known as “Sri Chottrudaya Easwarar” - the lord who offered rice (“choru” means rice in Tamil). This event is celebrated every year on the day of Avittam star, in the Tamil month of Chithirai (Apr-May). The tank near which Lord Shiva appeared and offered food and water to Appar can still be seen near the temple.

It is believed that King Kaliyugarama Pandiyan of Madurai came to this place and worshiped the lord to seek relief from his ailments. He prayed to the lord for eight days after taking a dip in each of the temple’s eight different holy waters. It is believed that he was cured of his illness.

There are idols of guardian deities of Chinnandavar and Periyandavar in the corridors.

There is no Navagraham in this temple. 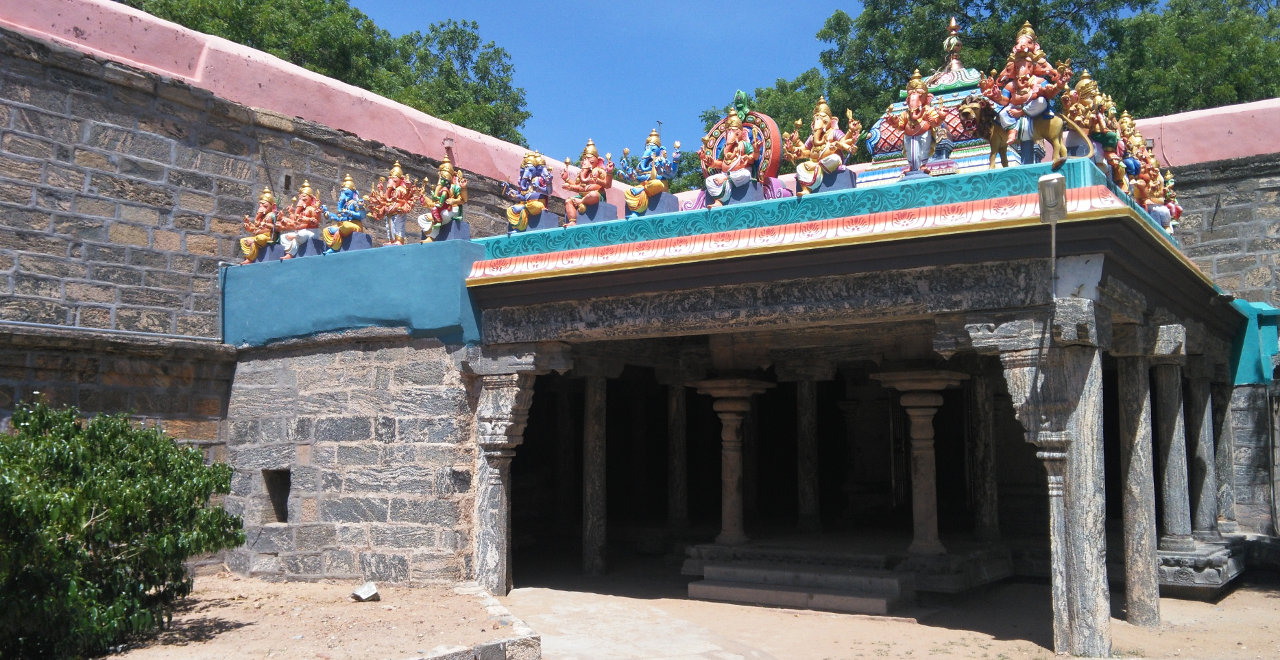 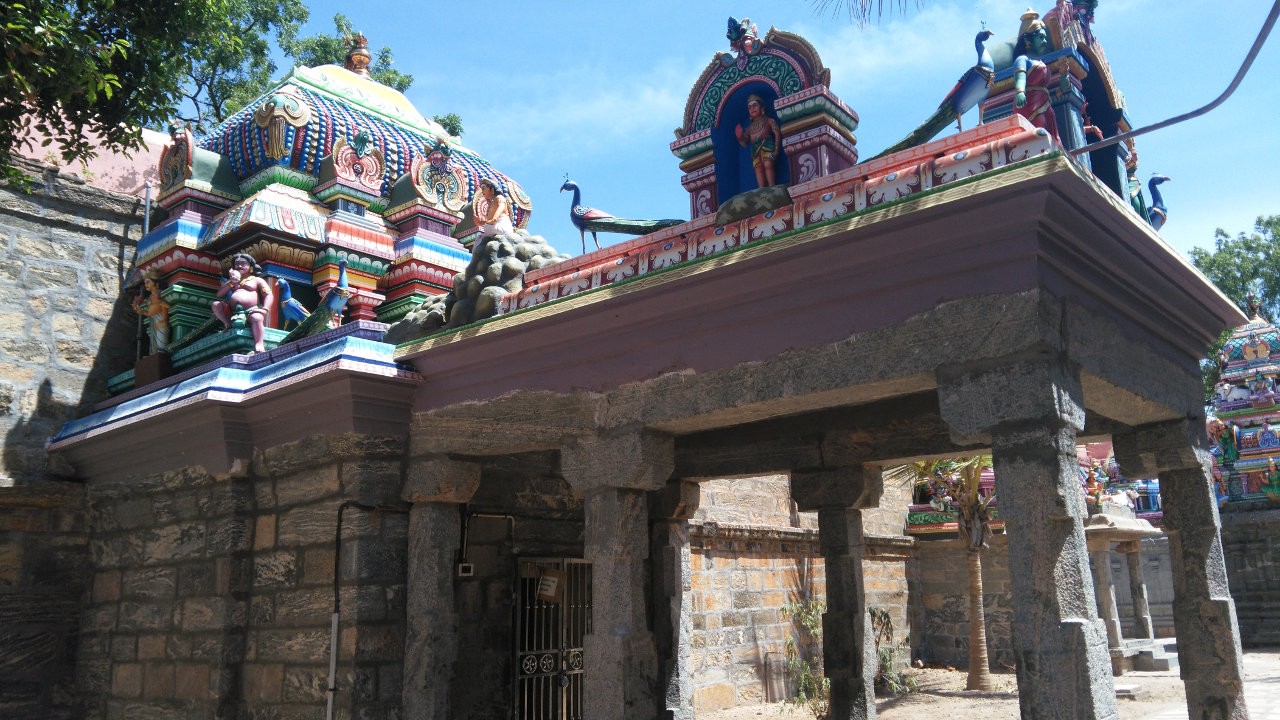 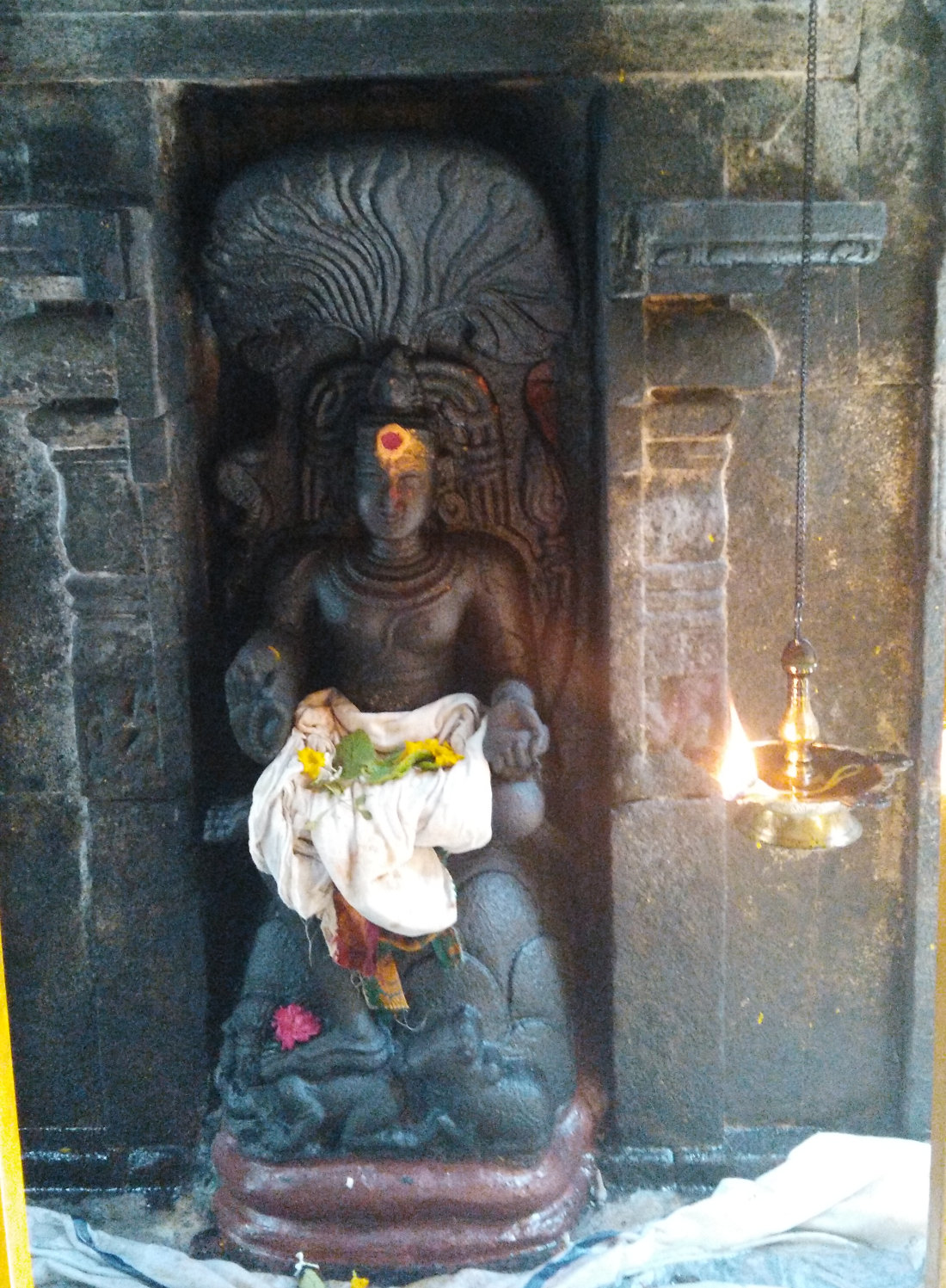 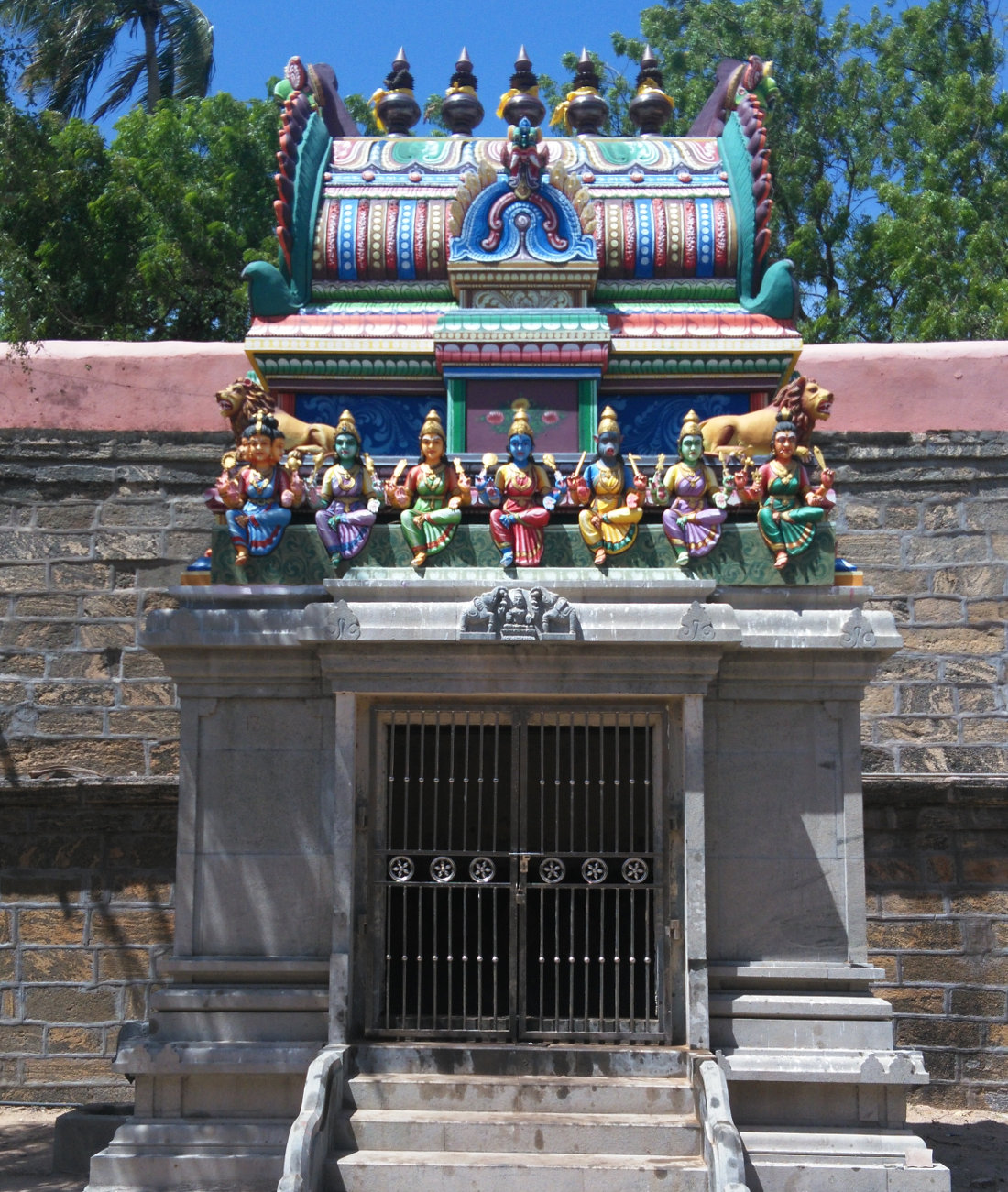 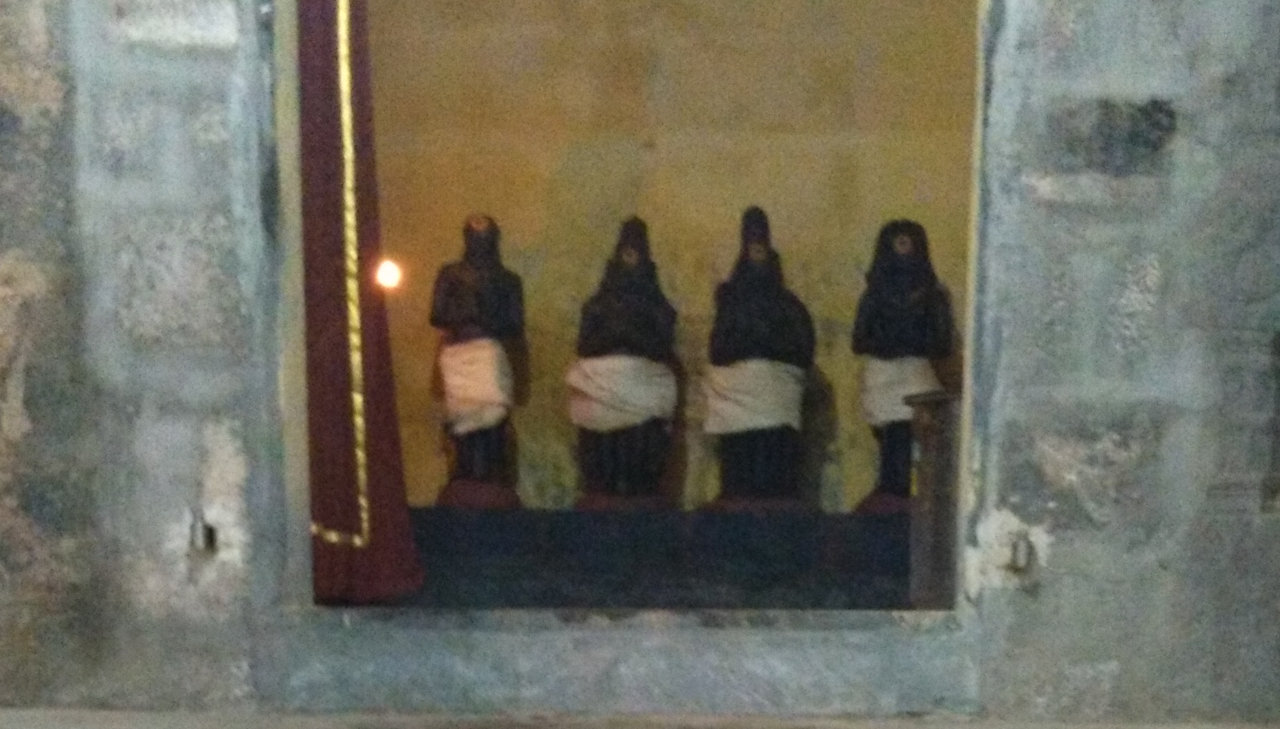 It is believed that Lord Suryan (Sun) worships Lord Shiva of this temple by directing his rays on the lingam in the Tamil months of Purattasi (September-October) and Panguni (March-April).

There are two shrines for Goddess Parvathy in this temple.

There is no separate Navagraham here as Lord Yama is considered as their lord. However, the 9 steps from “Ravana gate” to Lord Shiva’s shrine and the 9 holes in front of the Nandhi are considered to be the Navagrahas in this temple. 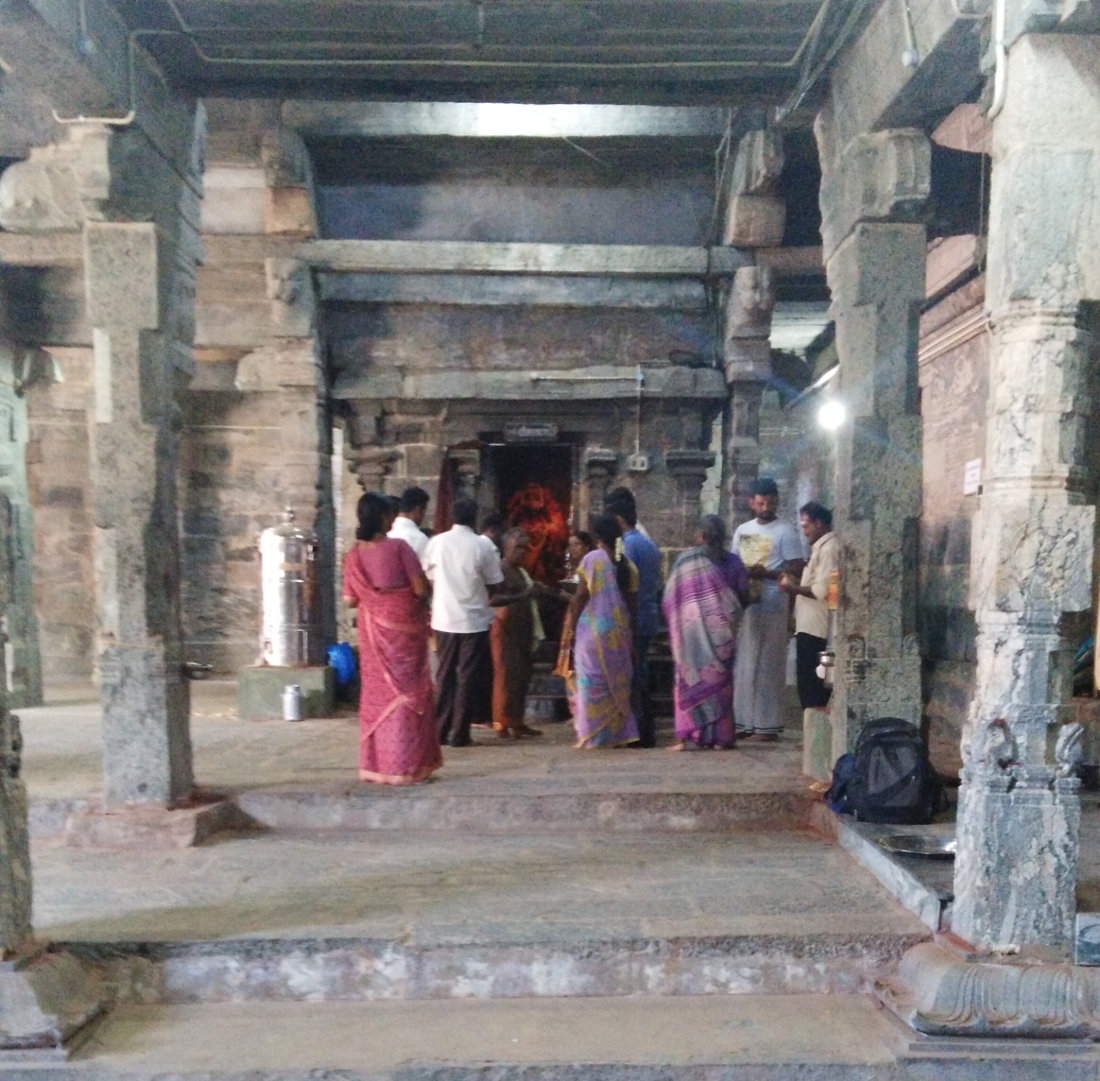 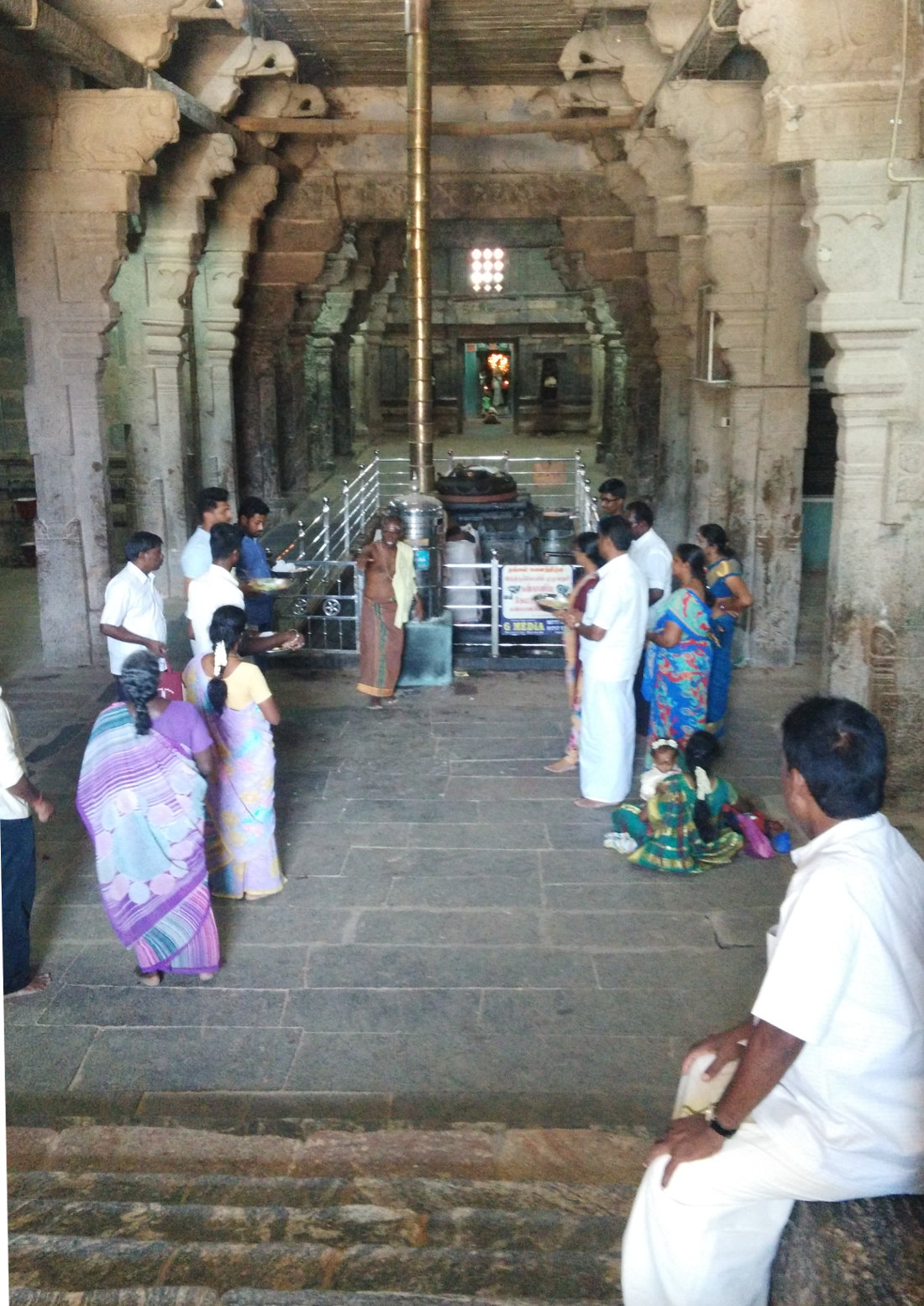 It is believed that the Nandhi near the flag post (Kodimaram) is Swayambu (self-manifested).

The temple’s Sthala Viruksham (Gneeli) does not grow anywhere else.

The Vimanam above the sanctum sanctorum is called “Badra Vimanam”.

Some of the stones in this temple have stripes like that on a tiger. Stones of this particular variety can only be found in this village.

Inside Lord Vinayakar’s shrine there are idols of Lord Shiva and Lord Mahavishnu (Senthamarai Kannan). Lord Dakshinamurthy of this temple is seen with Nandhi under his feet. These are two occurrences that is unique to this temple.

Soothama Munivar performed penance in this temple for many years and attained salvation. His “Jeeva Samadhi” (tomb) can be seen in the outer corridor. 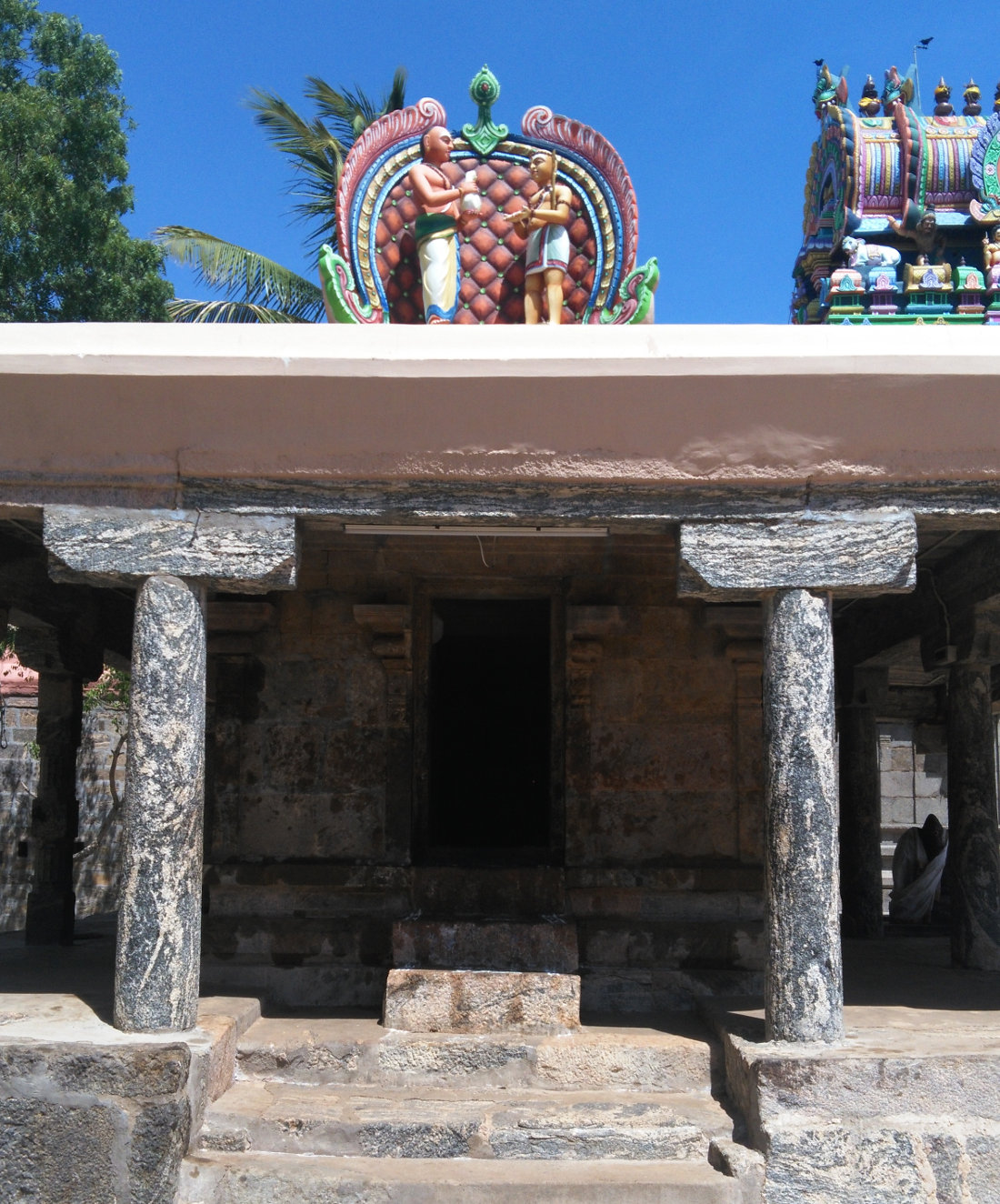 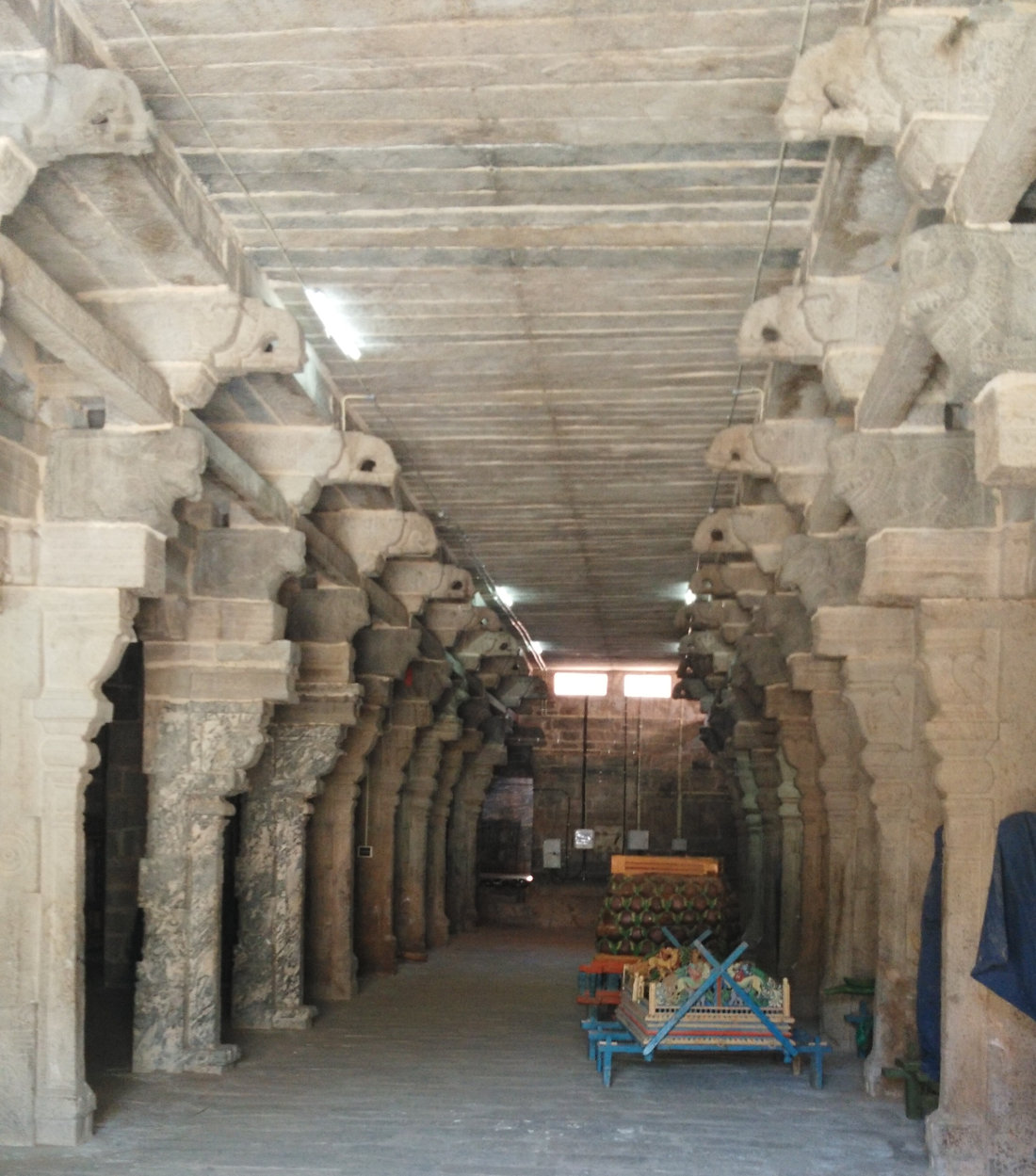 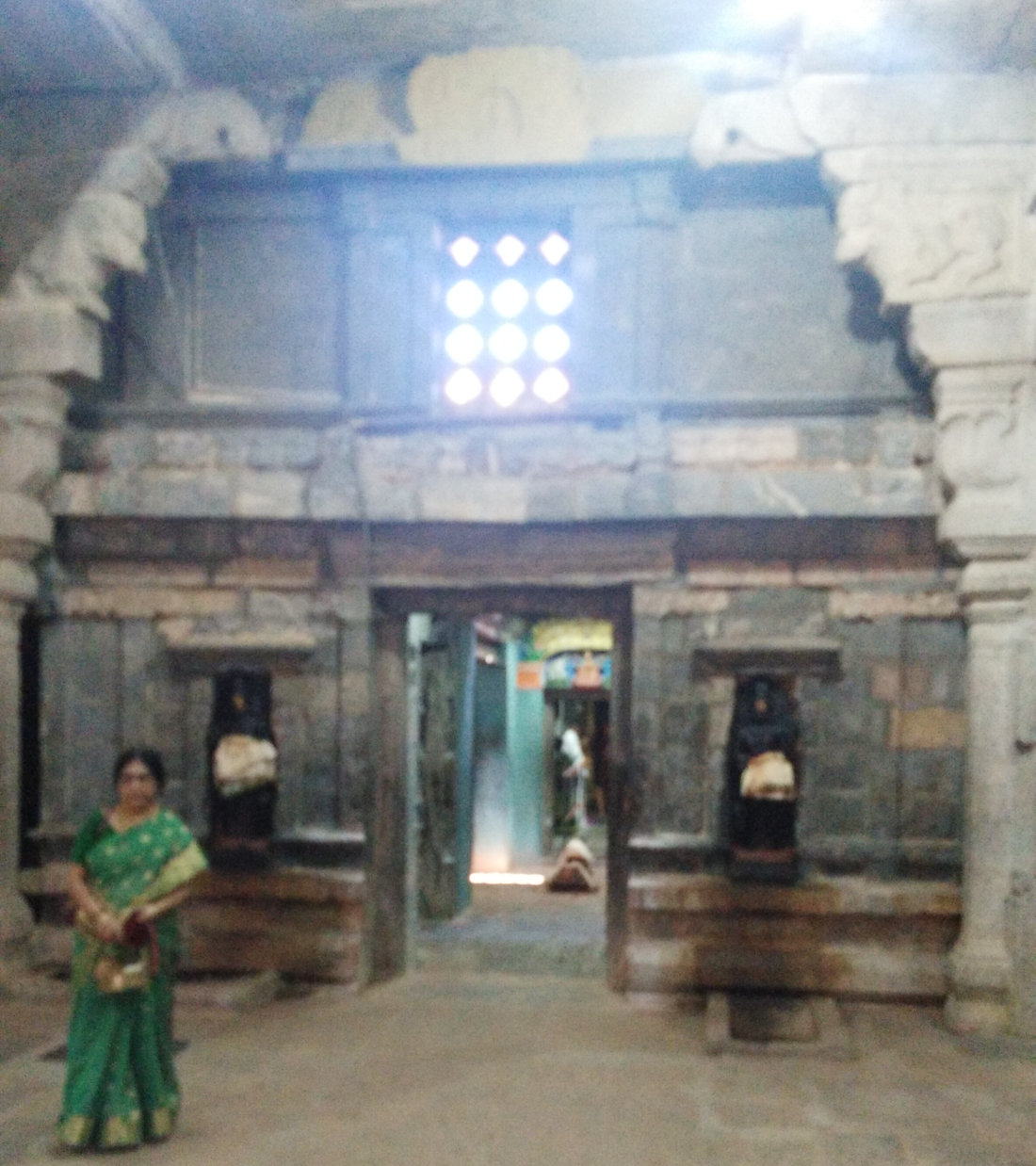 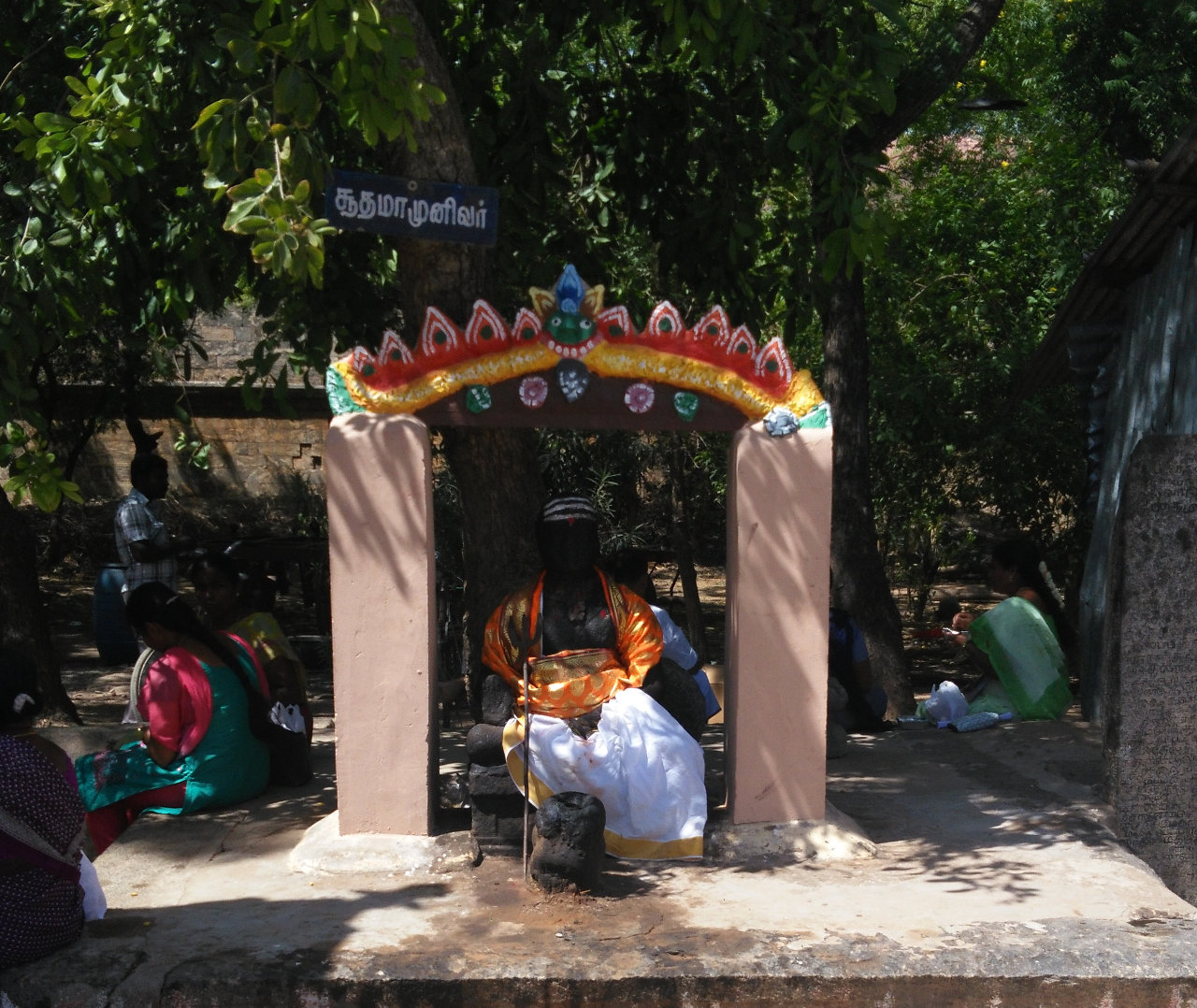 Devotees perform poojas in Lord Yama’s shrine on their 60th and 80th birthdays for a long and prosperous life.

As per Sthala Puranam, Devakanniyarkal (virgins) represent the sacred trees of this temple. It is believed that those facing obstacles in their marriage proposals can perform poojas here by tying a “mangal sutra” on the trees. It is also believed that those seeking “santhana prapthi” (child boon) can offer poojas to the sthala viruksham here.

Since Lord Yama’s position was reinstated here, devotees believe that worshiping Lord Shiva here would give them back their lost fortunes.

Special pujas to Lord Yama on the day of Poosam star in the Tamil month of Thai (Jan-Feb);

Shivrathri in the Tamil month of Masi (Feb-Mar);

10-day Chithirai Brahmotsavam in the Tamil month of Chithirai (April-May);

Vinayakar Chaturthi in the Tamil month of Aavani (Aug-Sept); and

Navarathri in the Tamil month of Purattasi (Sept-Oct). 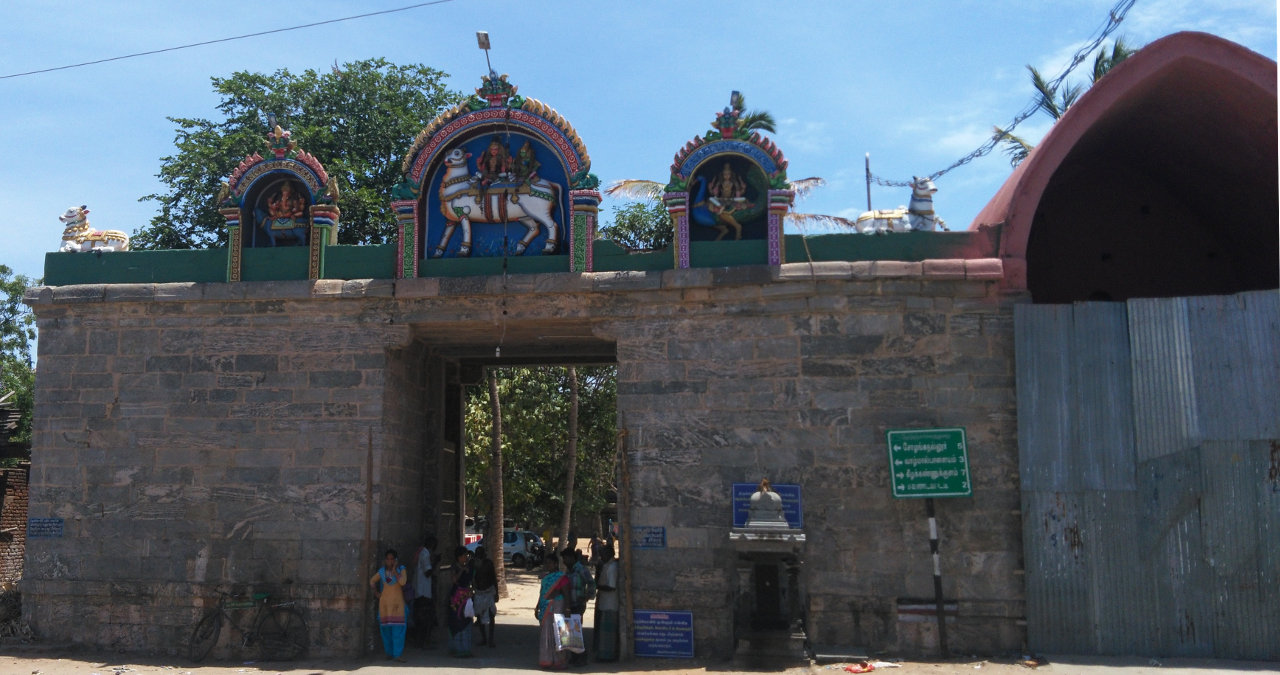 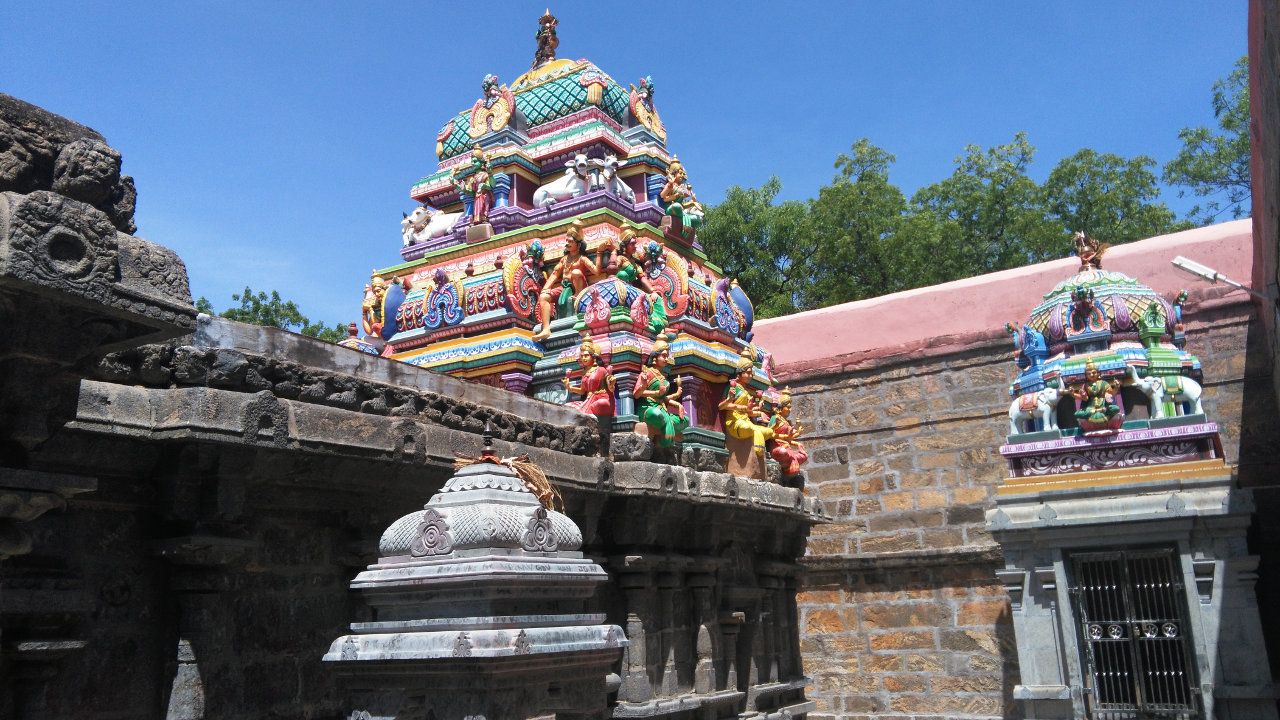 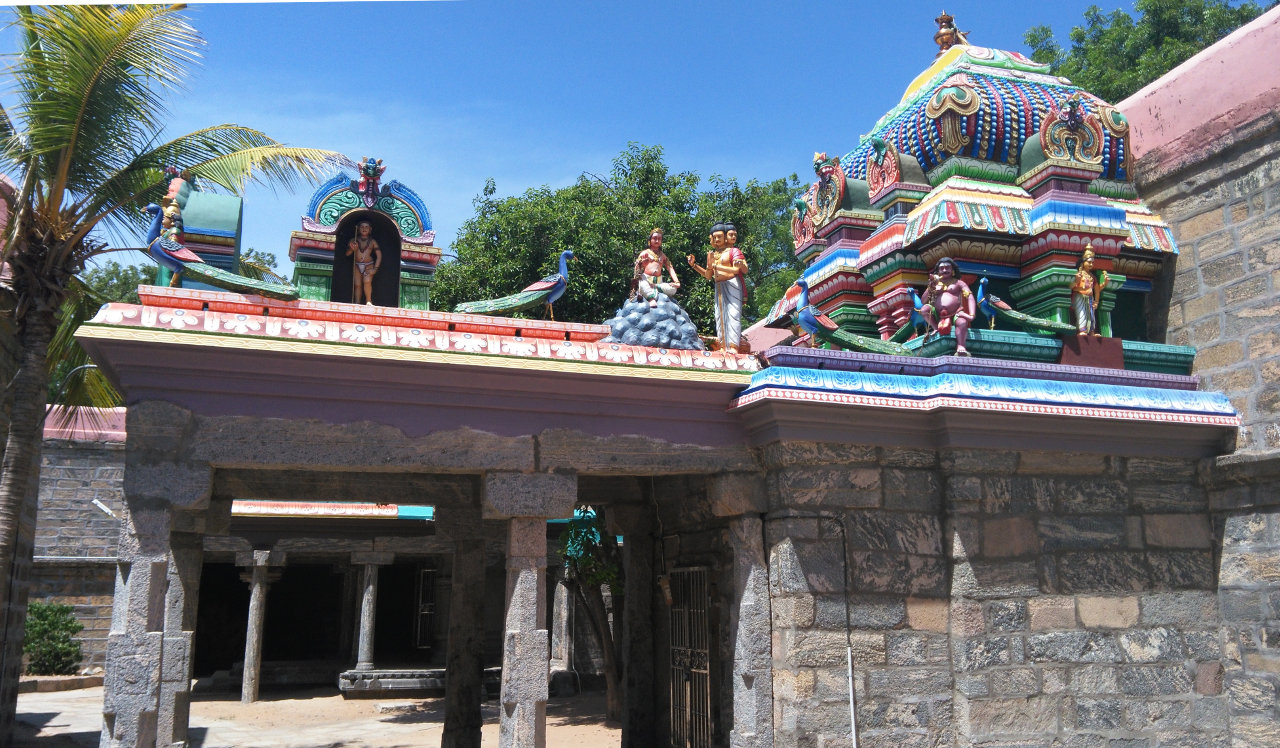 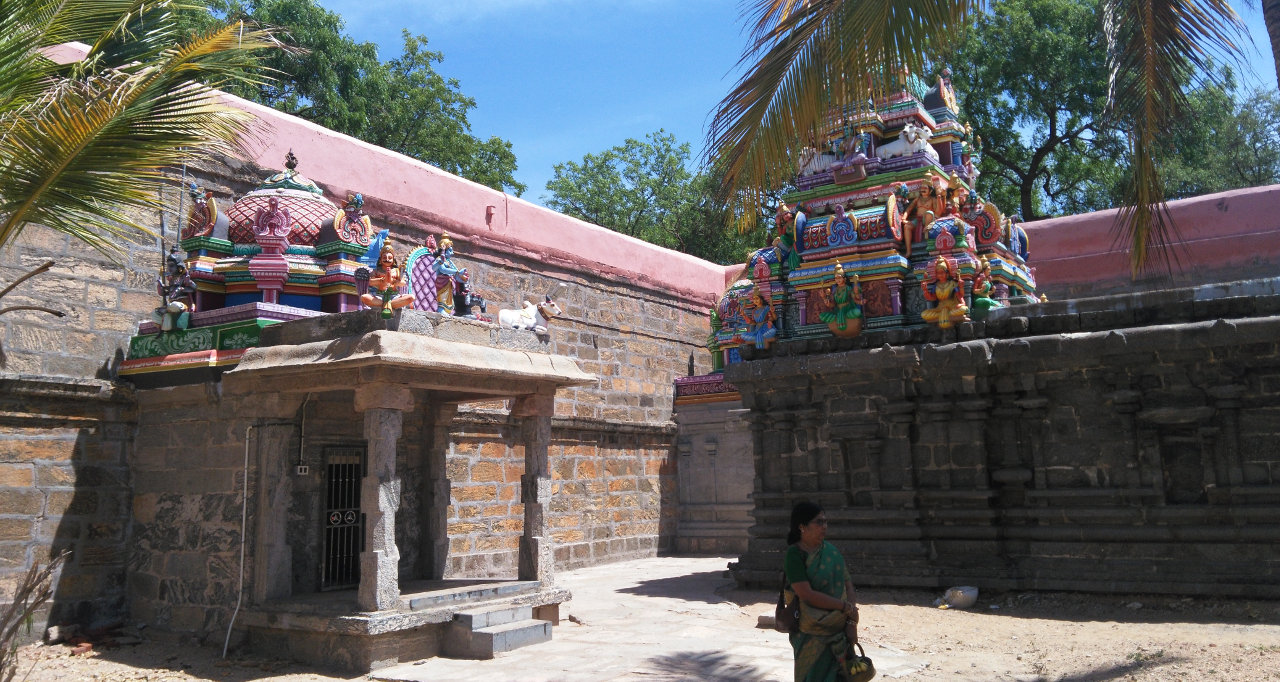