This ancient temple is on the northern bank of the river Thirumalairayan. This temple is very big and is spread over a sprawling 4.4 acre temple campus. It has 4 main towers at all the four entrances.

This place was once called Pazhayarai and it was the capital of the Chola Kingdom. 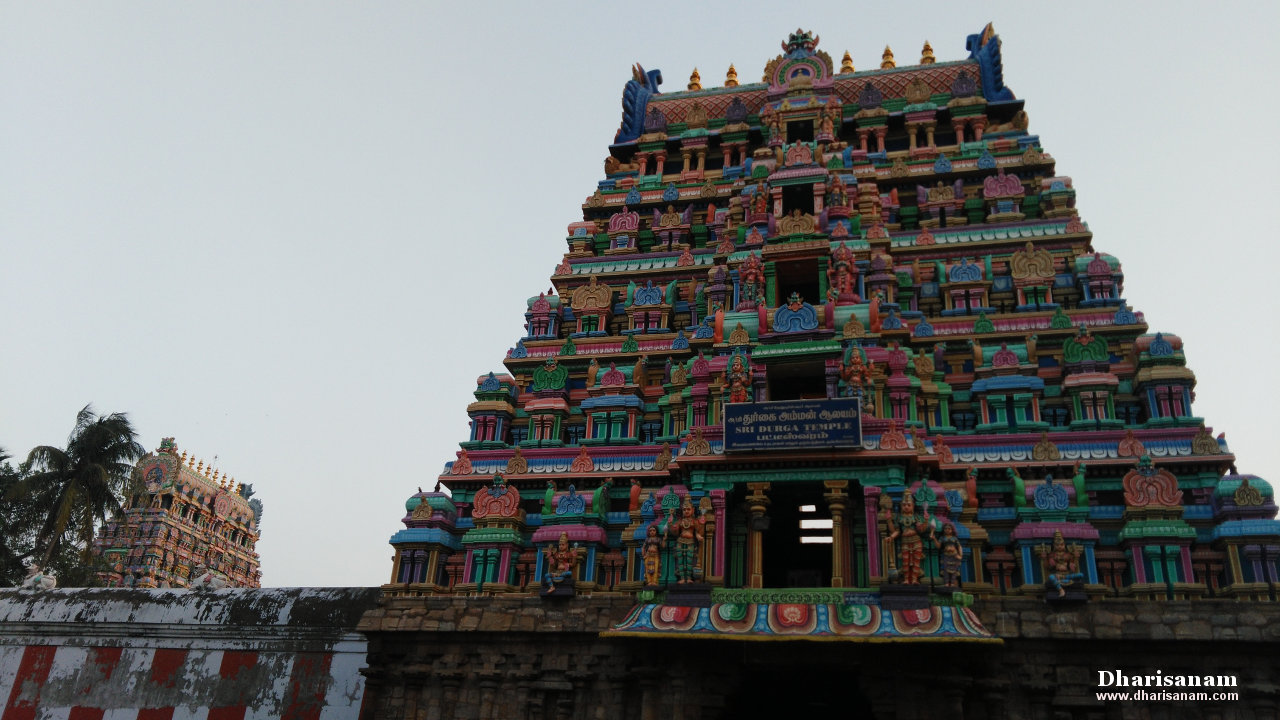 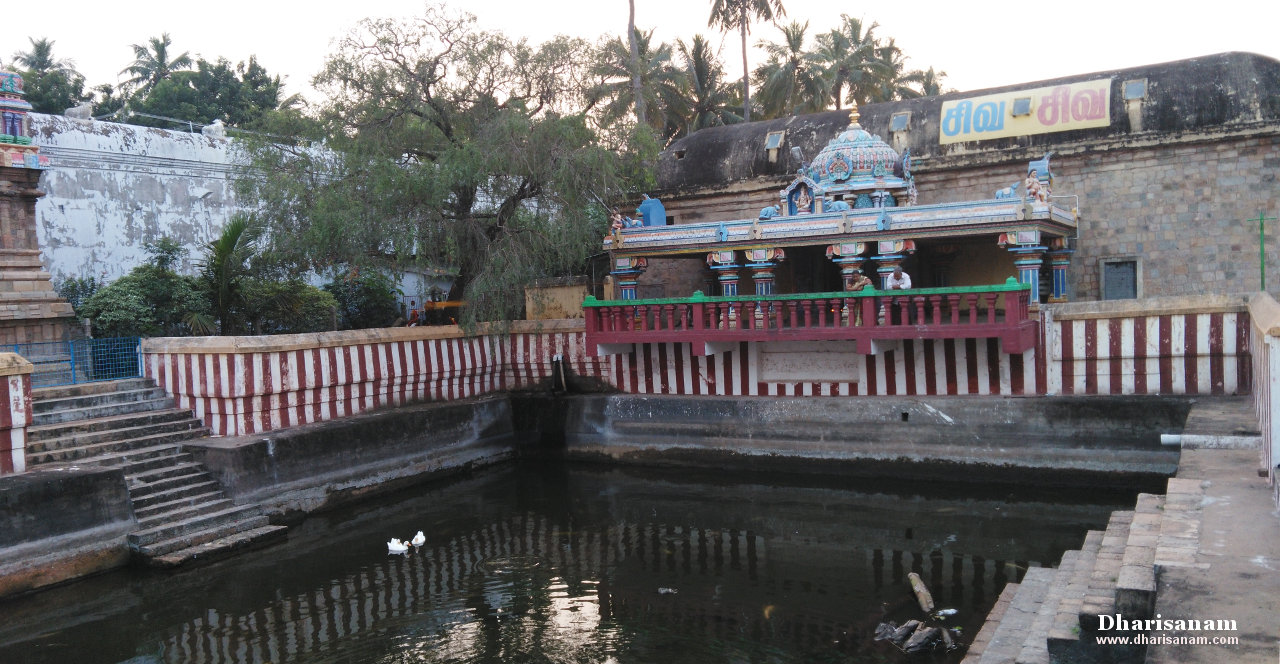 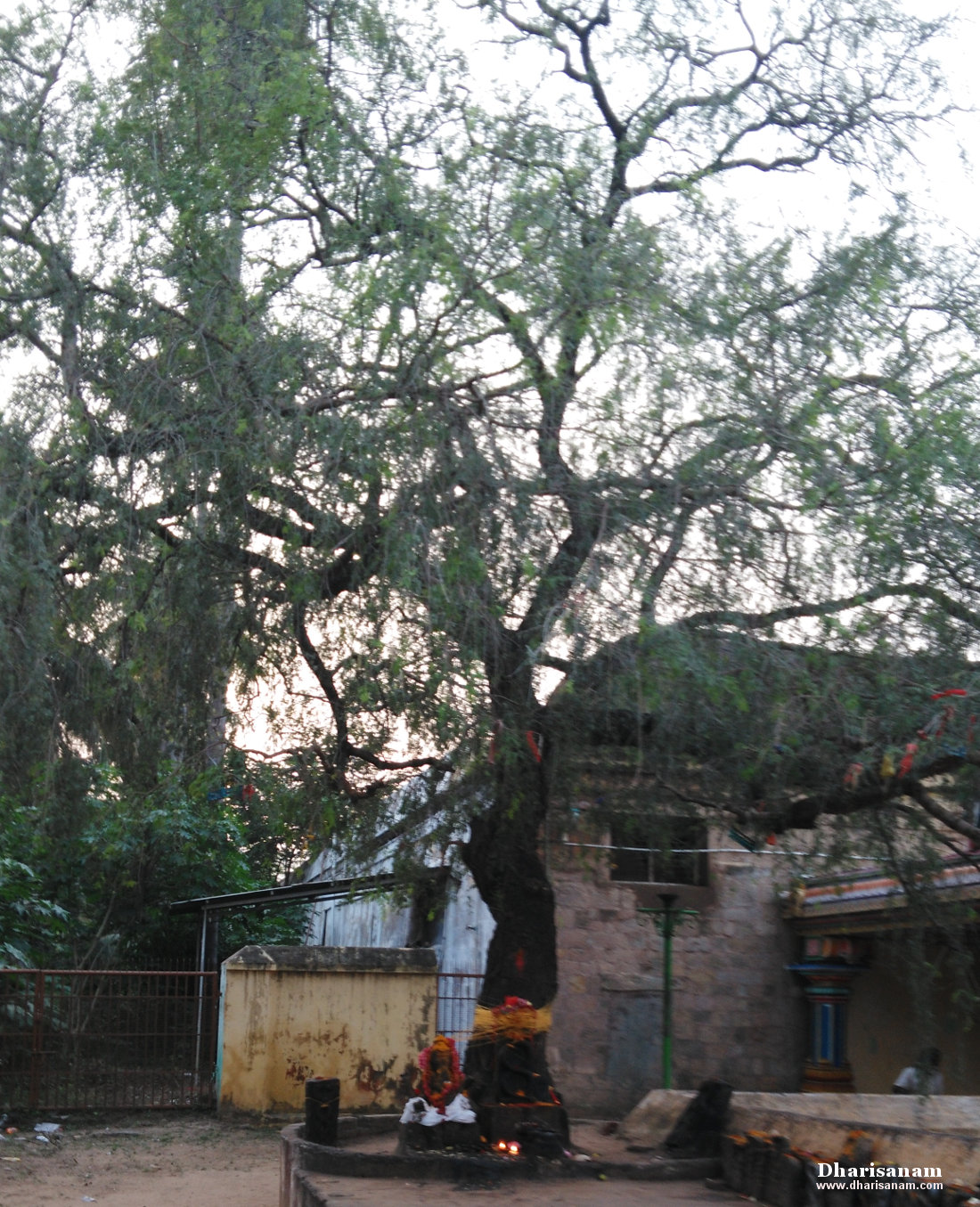 The legend is that Patti, the daughter of the divine cow Kamadenu, worshipped the lord here. Hence this place gets the name Patteecharam (“Echaram” means temple in Tamil). The lord is praised as Sri Patteeswarar (Sri Thenupureeswarar in Sanskrit).

It is believed that Goddess Parvathy had performed penance here. Devas came here in the form of trees and plants to protect her and make the environment green. Kamadenu sent her daughter Patti to assist Goddess Parvathy. Pleased with her penance, Lord Shiva blessed her with his darshan. In this darshan he was seen with his dreadlocks (“jadamudi”).

Another legend is that Saint Thirugnanasambanthar, after worshiping the lord at Sakthi Mutram, a nearby Lord Shiva temple, proceeded to visit this temple. It was a peak summer day and in order to protect him from the oppressive heat, Lord Shiva created a tent lined with pearls (“Muthu panthal”) and sent it through his attendants (“Bhootha ganas”). He also advised the Nandhis to move a little bit to the side so that he could see the beautiful sight of Sambanthar arriving through the pearls roof.

Lord Ram worshipped Lord Shiva here to seek pardon for the sins (“Chayahathi dosham”) that he had accrued by killing Ravana, Vaali and others. This event is commemorated every year during the Tamil month of Margazhi (Dec-Jan). He created a well here and used this water to perform abhishekam to Lord Shiva. This well is known as “Rama Theertham” or “Kodi Theertham”. This Theertham is considered to be equivalent to “Dhanushkoti Theertham”.

Sage Medhavi of Maluva Kingdom was to attend a yagna conducted by Sage Pradesas. Sage Medhavi asked one of his students, a brahmin boy named Dharma Sarma, to take care of the Ashram and the cows. When he returned he found that the cows were not taken care of properly. He cursed the student that he would turn into a dog. When the boy pleaded for forgiveness, the sage advised him to come to this temple and worship the lord here. Dharma Sarma came here, took a holy dip in the “Gnanavavi”, circumambulated the Sthala Viruksham (Vanni) and worshiped the lord. It is believed that he regained his original form after that.

It is believed that Sage Viswamitra worshiped the lord here and attained the full power of “Gayathri Mantra” and also received the title of “Brahma Rishi”. The Gayathri Theertham here is believed to have been created by Sage Vishwamitra.

Chithirasena Maharaja of Kaampeeli kingdom stayed here along with his wife and worshiped the lord. He performed “Puthira Kameshti Yagna” and was blessed with a child. The king also conducted a festival during Uthirattathi star day in the Tamil month of Thai.

King Sakthiyumnan, who was afflicted with Brahmahathi dosham, was advised by Sage Kasyaba to visit this temple for relief. The king visited this place and worshiped the lord after taking bath in the Gnanavavi Theertham. It is believed that a parrot taught him the “Panchatchara mantra” (namasivaya) in this temple and thereafter he was relieved from his dosham.

It is believed that Sage Markandeya also worshiped the lord here.

Goddess Vishnu Durgai’s shrine, located at the northern entrance of this temple, is very popular among devotees. This temple is also known as Durgai Amman temple.

The Chola kings including the great Rajaraja Chola were staunch devotees of Goddess Durgai. She was the protecting deity of the Cholas in their fort’s northern gate.  After the decline of the Chola empire, the idol of Durgai from their fort was installed in this temple. She is also known as “Sri Kottaivayil Durgai”.

The Goddess here is known by many names such as Vishnu Durgai, Durga Lakshmi, Navayoga Nayaki, Navakoti Nayaki, Navagraha Nayaki, Navaratri Nayaki and Navasakthi Nayaki, to name a few. Unlike in other temples, Goddess Durgai here has a pleasing appearance (“Shanta Swarupi”). She appears in a Thribanga stature - with eight hands, three eyes, wearing ear rings (“kundalam”) and standing on top of the demon Mahishasuran. Generally, her mount (lion) looks towards the right side whereas here it faces left.

In the “koshtam” (place surrounding the sanctum sanctorum), idols of Vinayakar, Dakshinamurthy, Lingothbavar, Brahma, Durgai and Chandikeswarar can be seen. 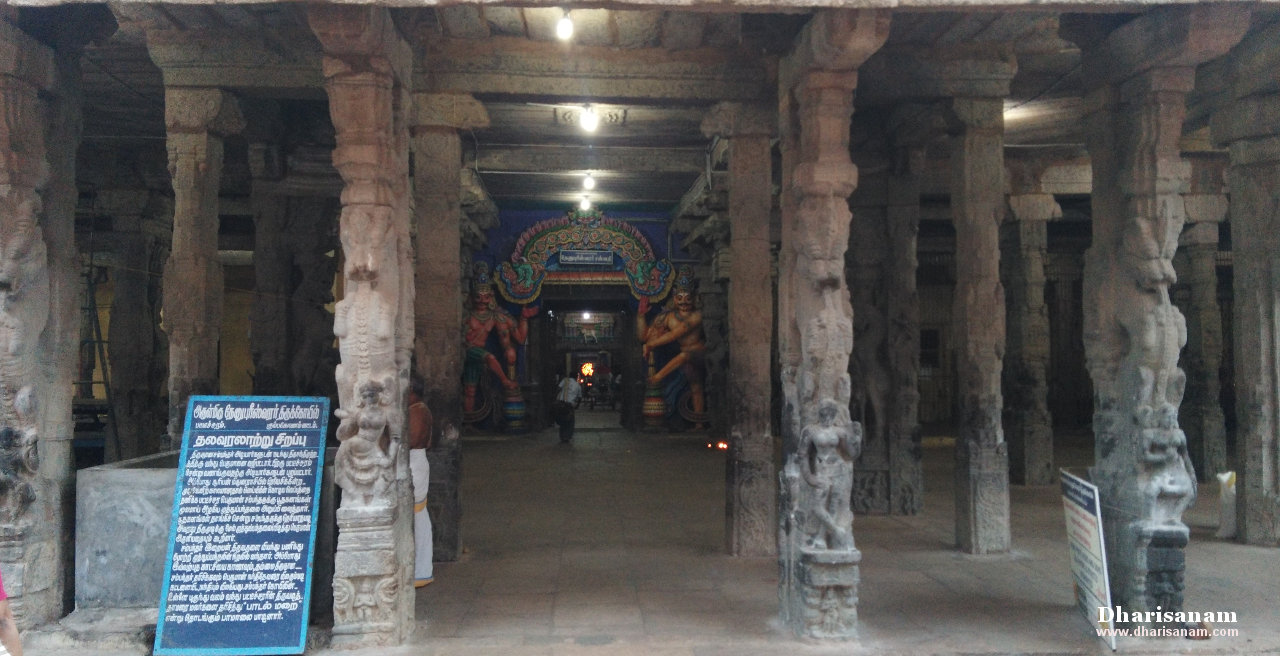 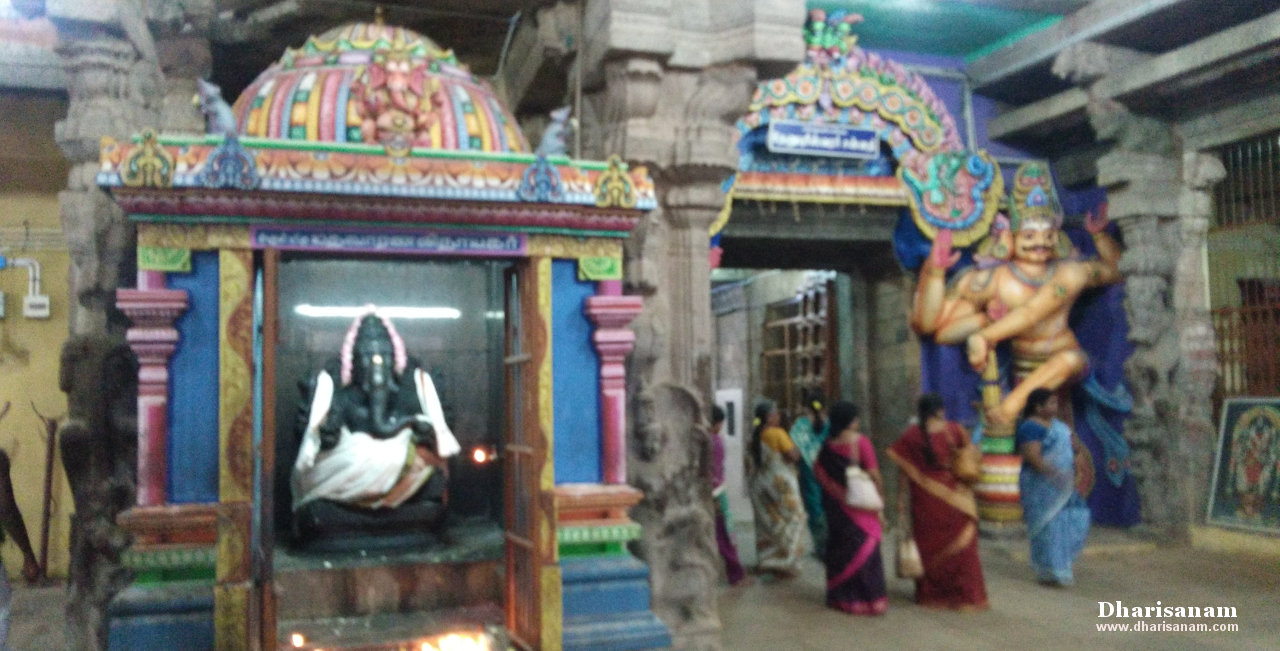 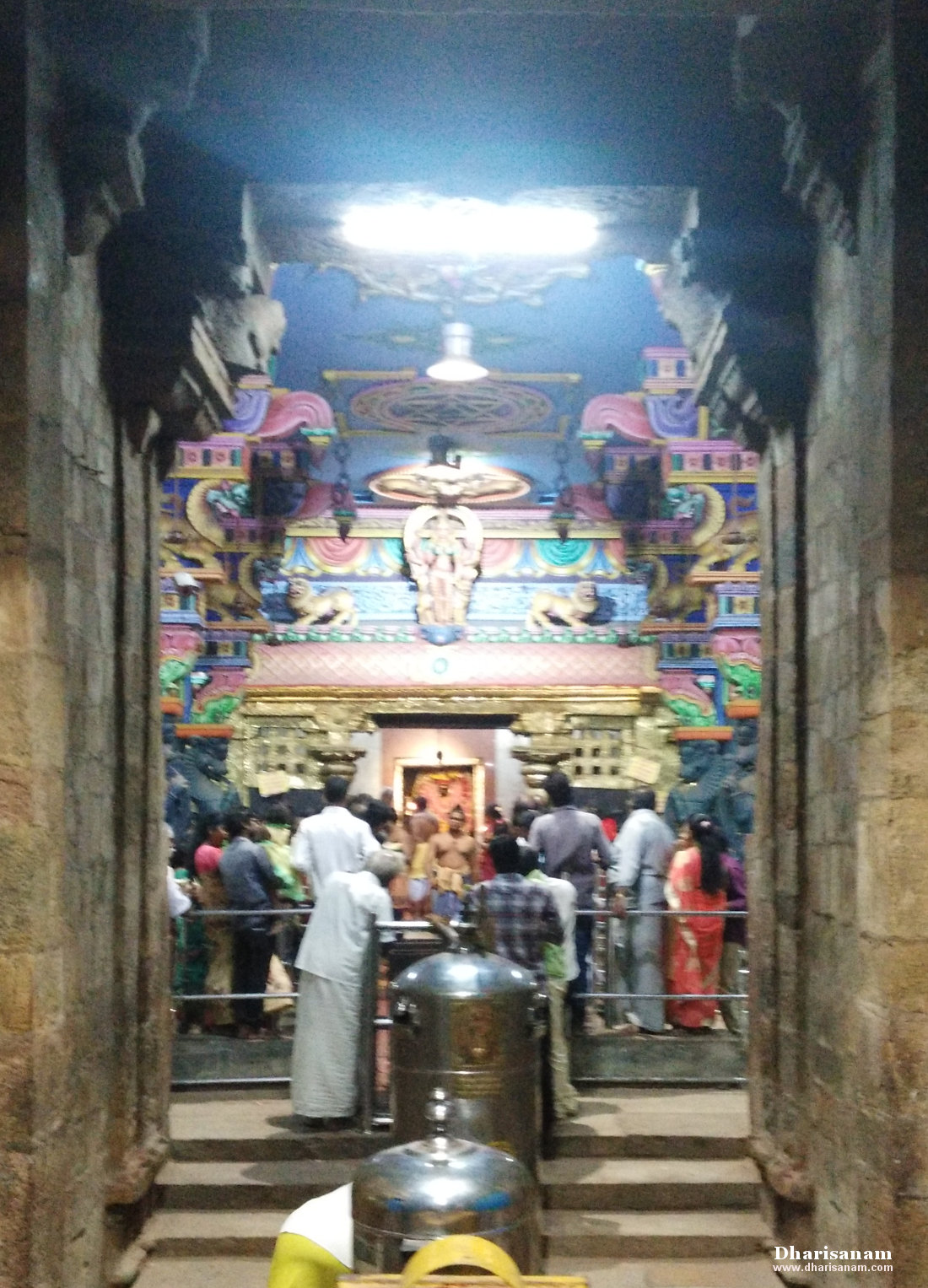 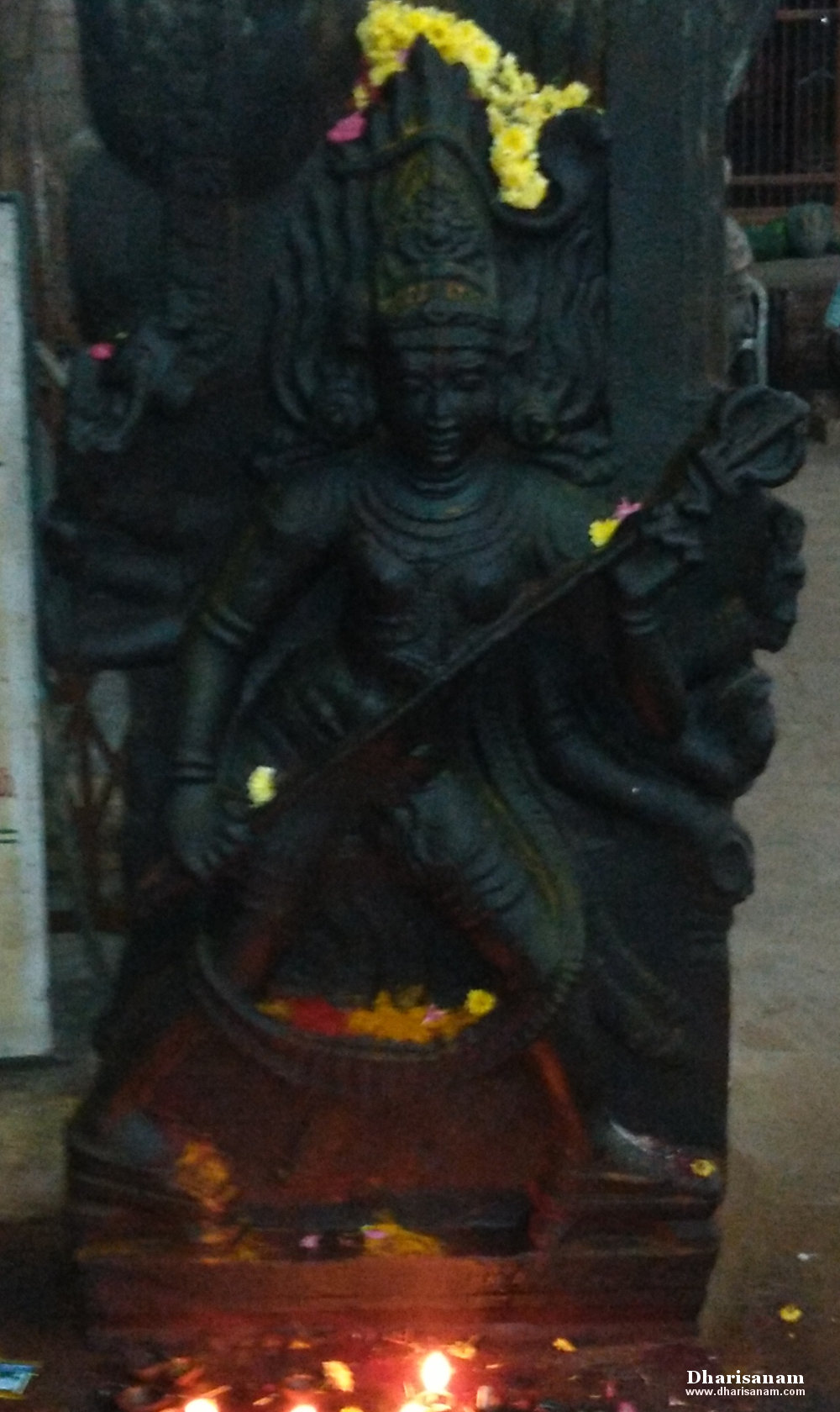 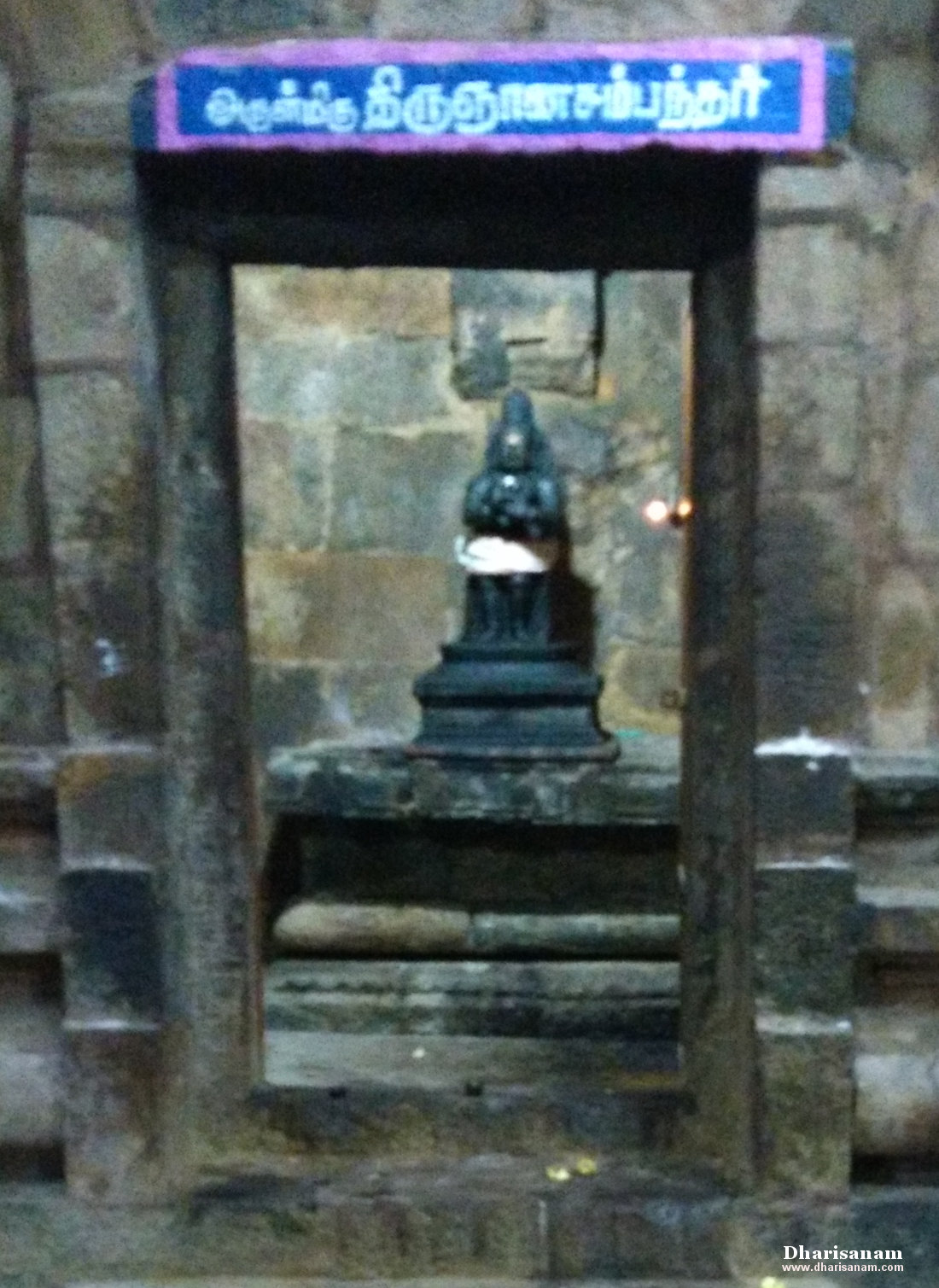 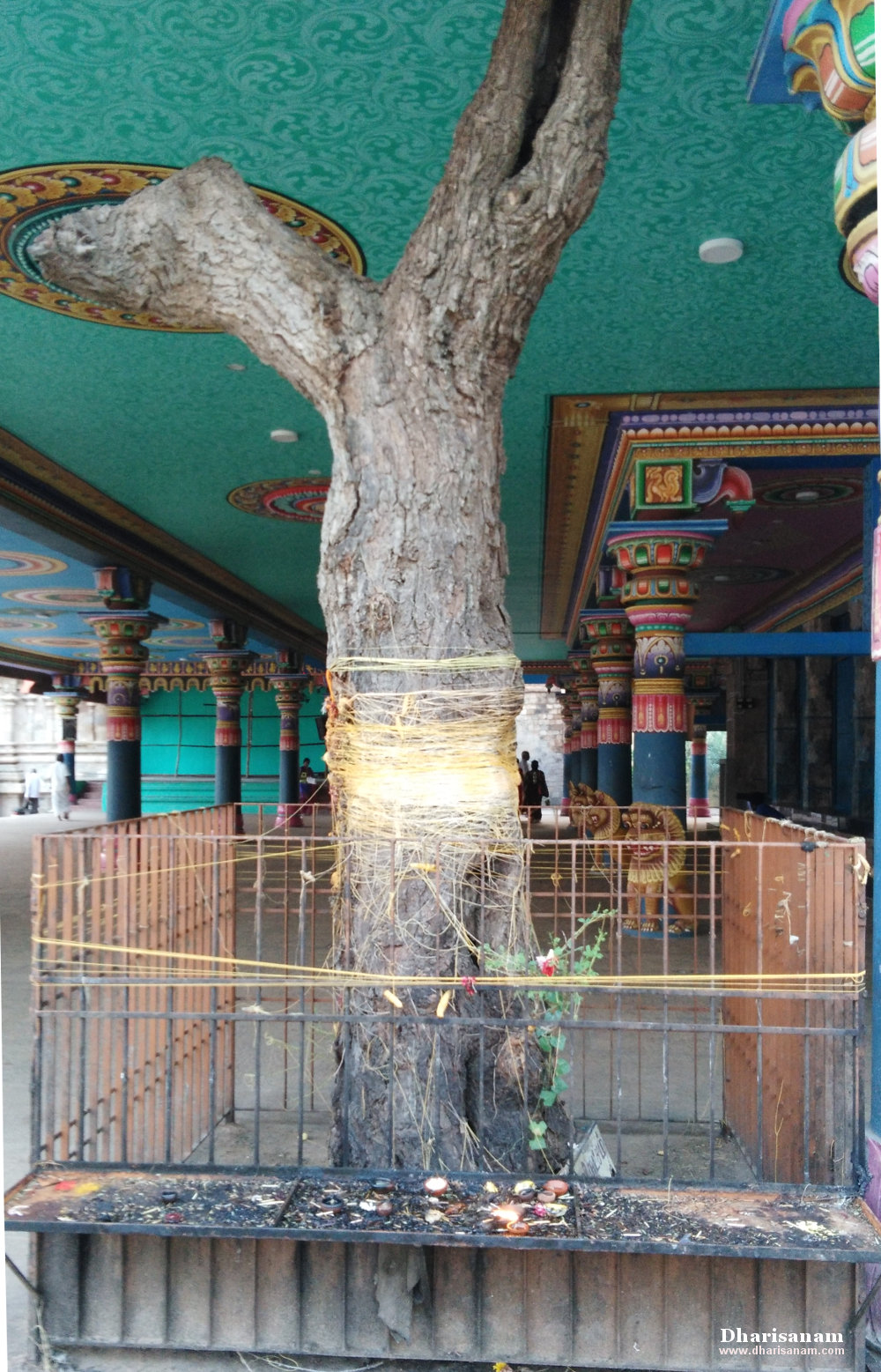 This is a typical temple from the time of Cholas and Nayakkars.  It is spread over a large campus, has beautiful and intricate sculptures, artistic pillars and halls (mandapams).

This is a “Pancha Nandhi kshetram”. All the 5 Nandhis here are not seen in their usual plae but are shifted a bit to the side.

The pillars in Goddess Parvathy’s shrine have many beautiful sculptures of the mythological “Yaali”. It also has a chain made of a single stone which is rotatable. 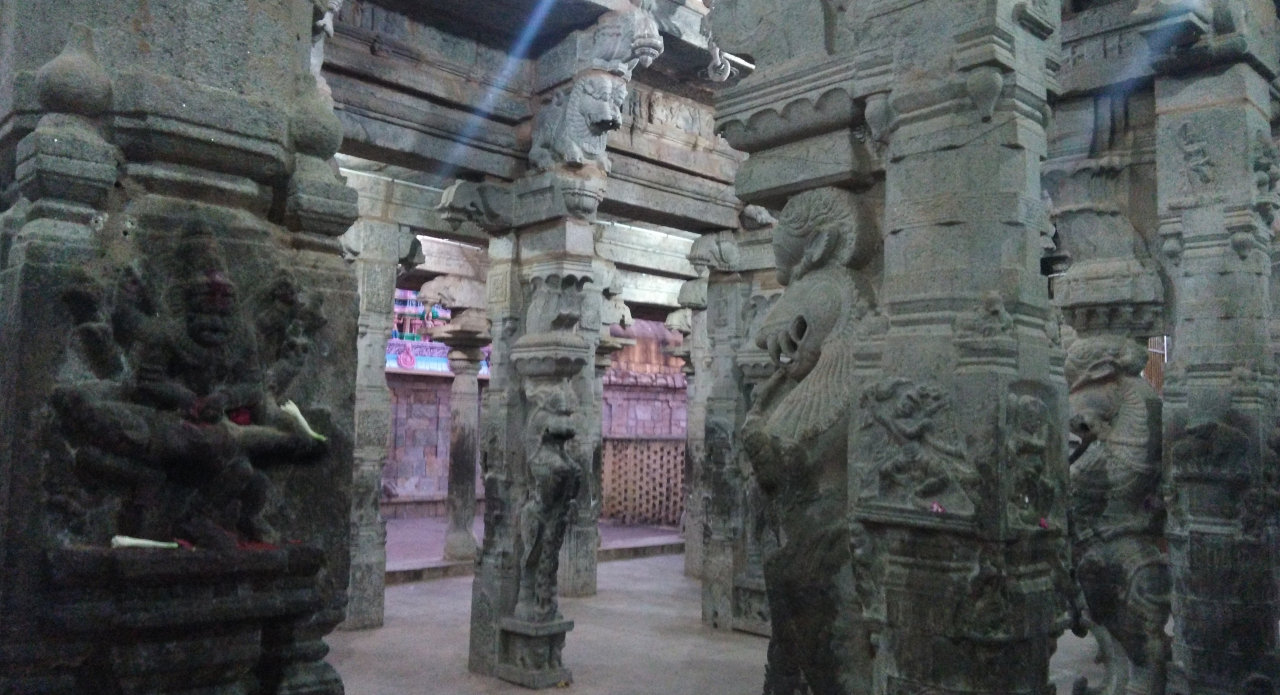 Beautiful paintings depicting the legends of this temple are displayed in the Goddess’s shrine. Some of them are -

Devotees worship Lord Shiva of this temple to seek the blessing of prosperity and wisdom.

Devotees can get relief from the adverse effects of planets Raahu and Kethu by worshiping Goddess Durgai here.

Devotees pray to Lord Bhairavar here to seek relief from enemy threats and for cure from dog bites and other ailments.

Muthu Panthal festival on the 1st day of the Tamil month Aani (June-July),

Theerthavari at Kodi theertham on new moon day in Margazhi (Dec-Jan) to commomerate the event of Lord Ram being relieved from Chayahasthi dosham,

Other festivals celebrated here are – 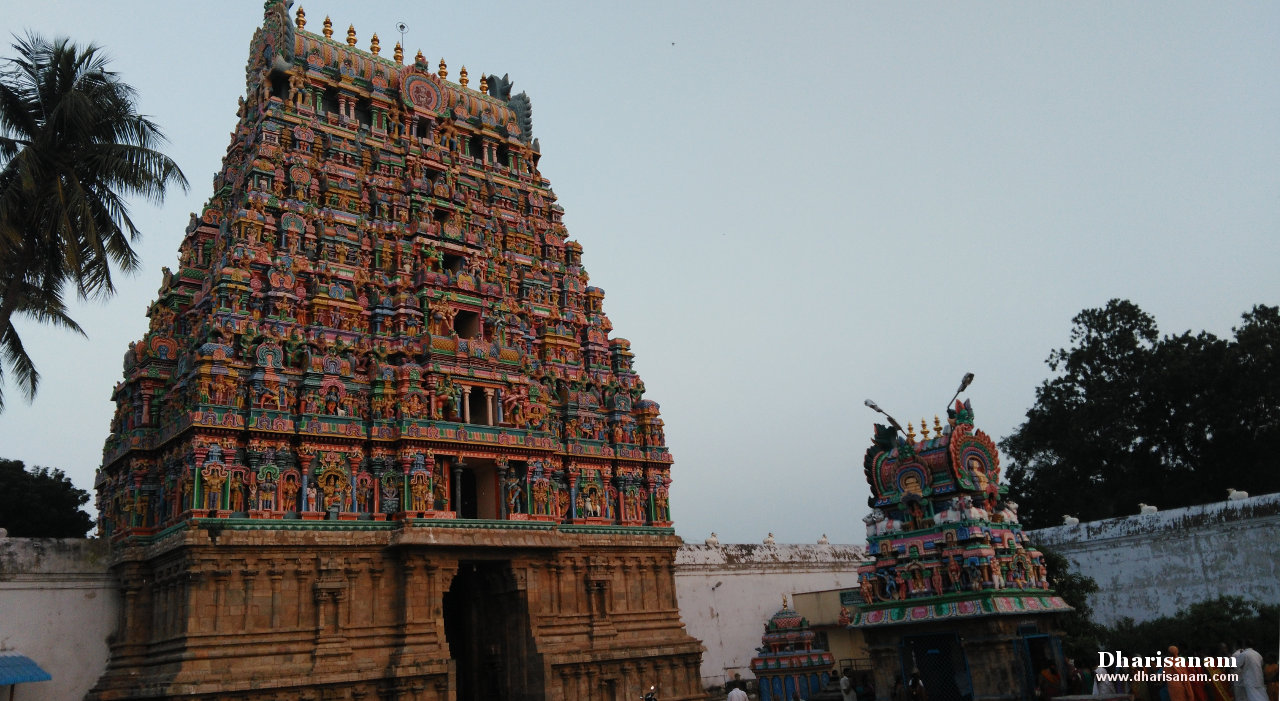 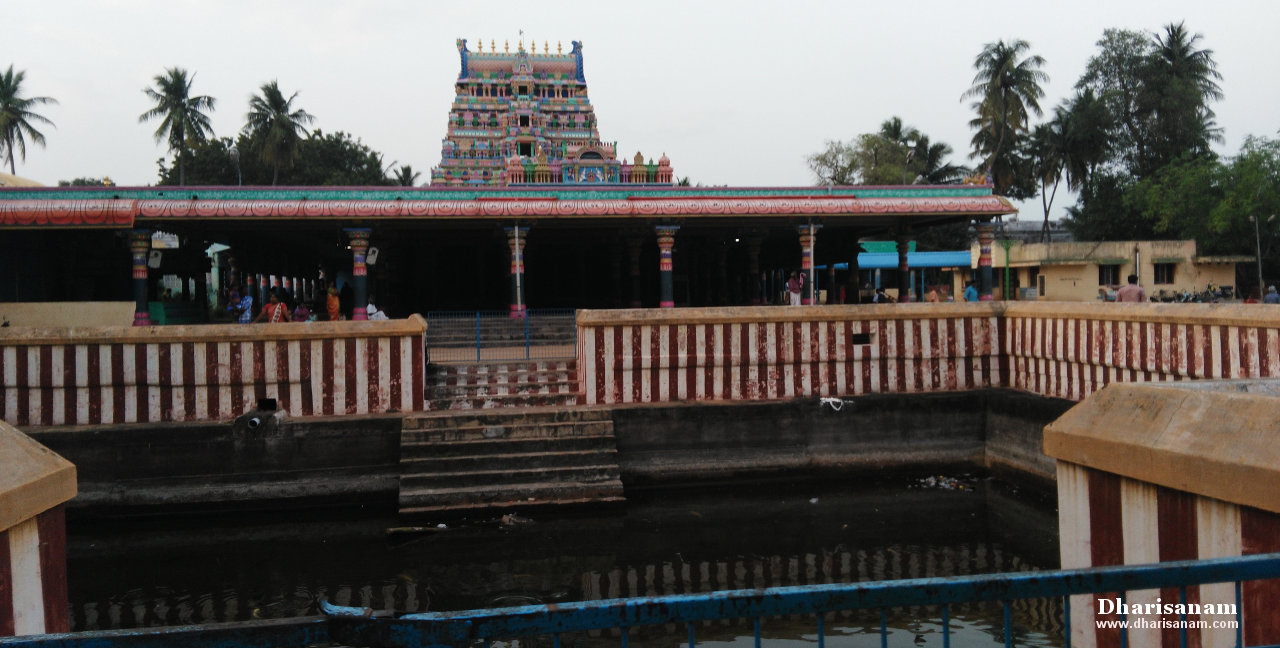 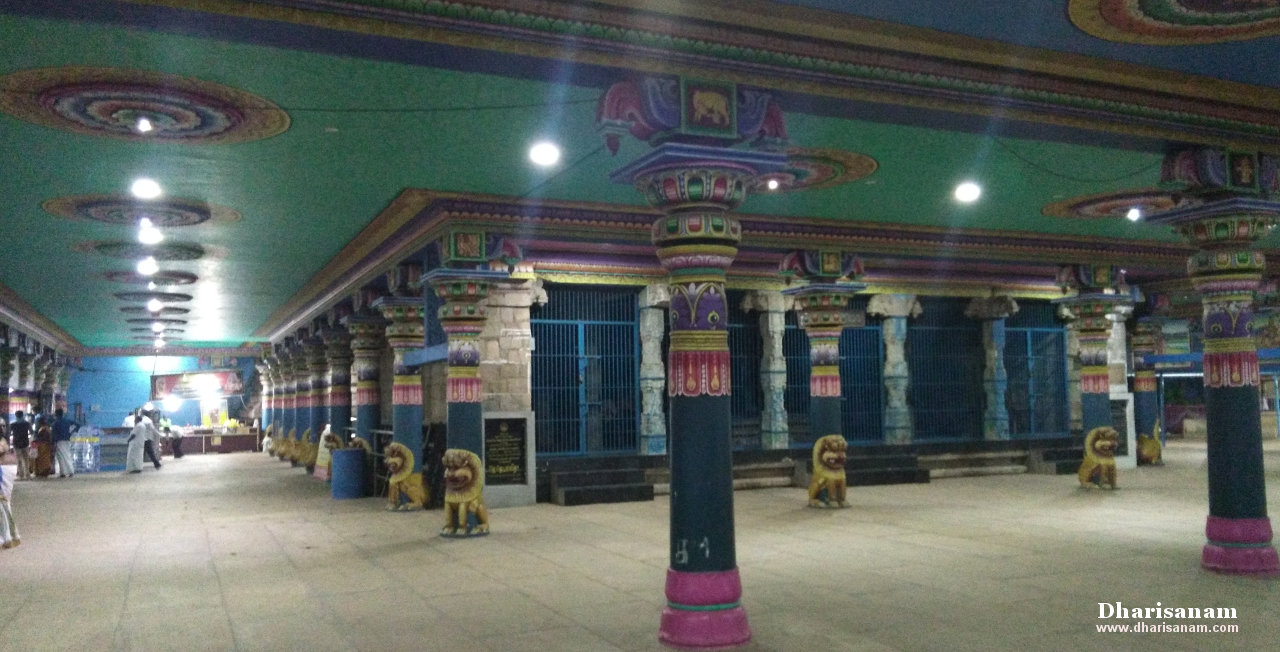 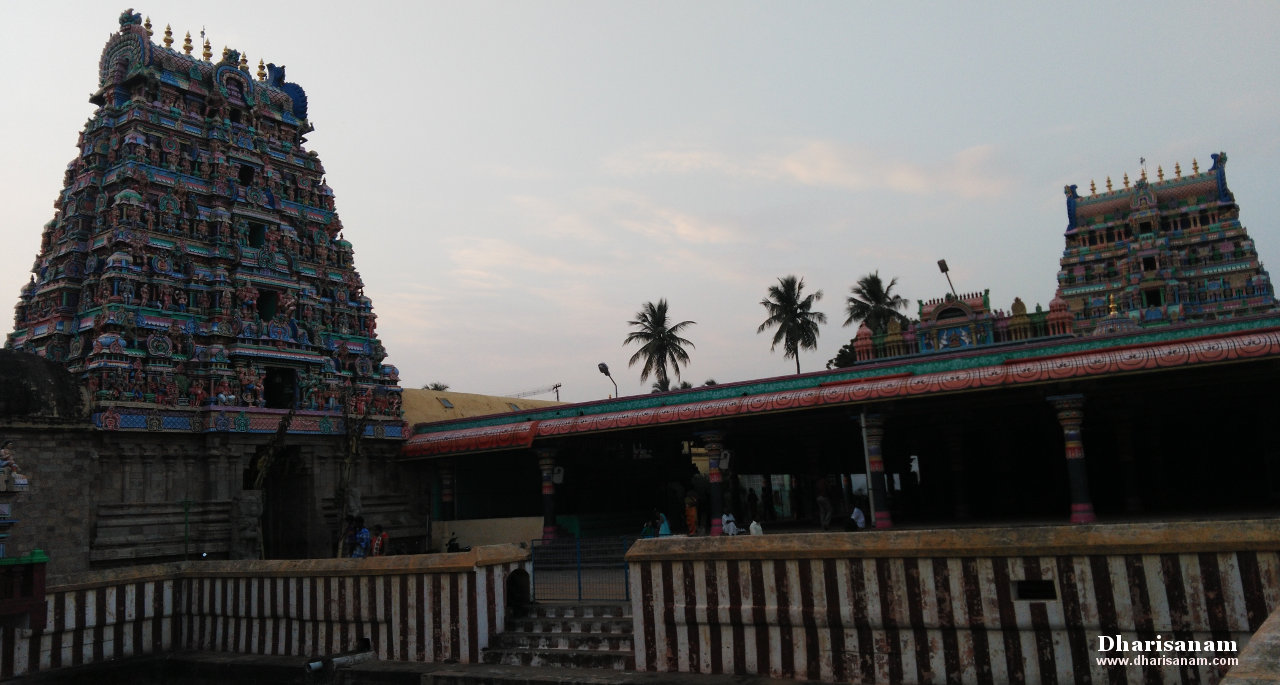 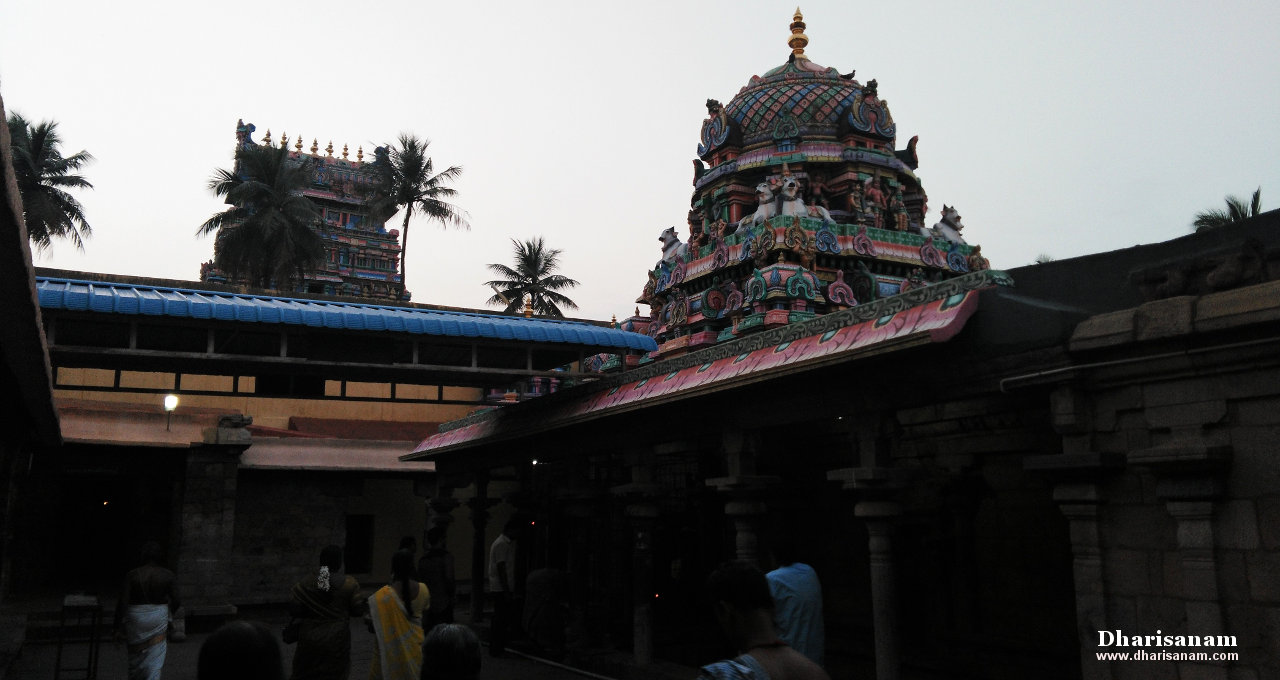