This ancient temple is believed to have been constructed by Chola kings.

This temple is under the administrative control of Dharumapuram Aadheenam as well as the Hindu Religious and Charitable Endowments Department of Government of Tamil Nadu (HR & CE). 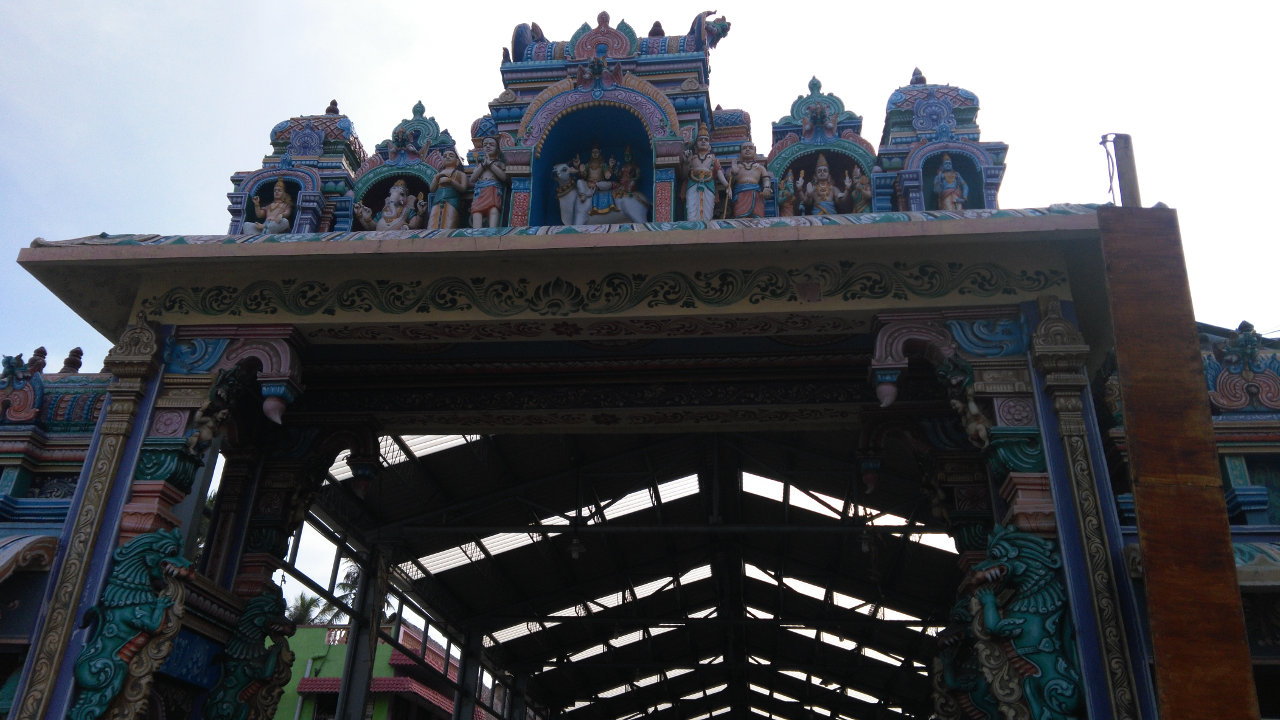 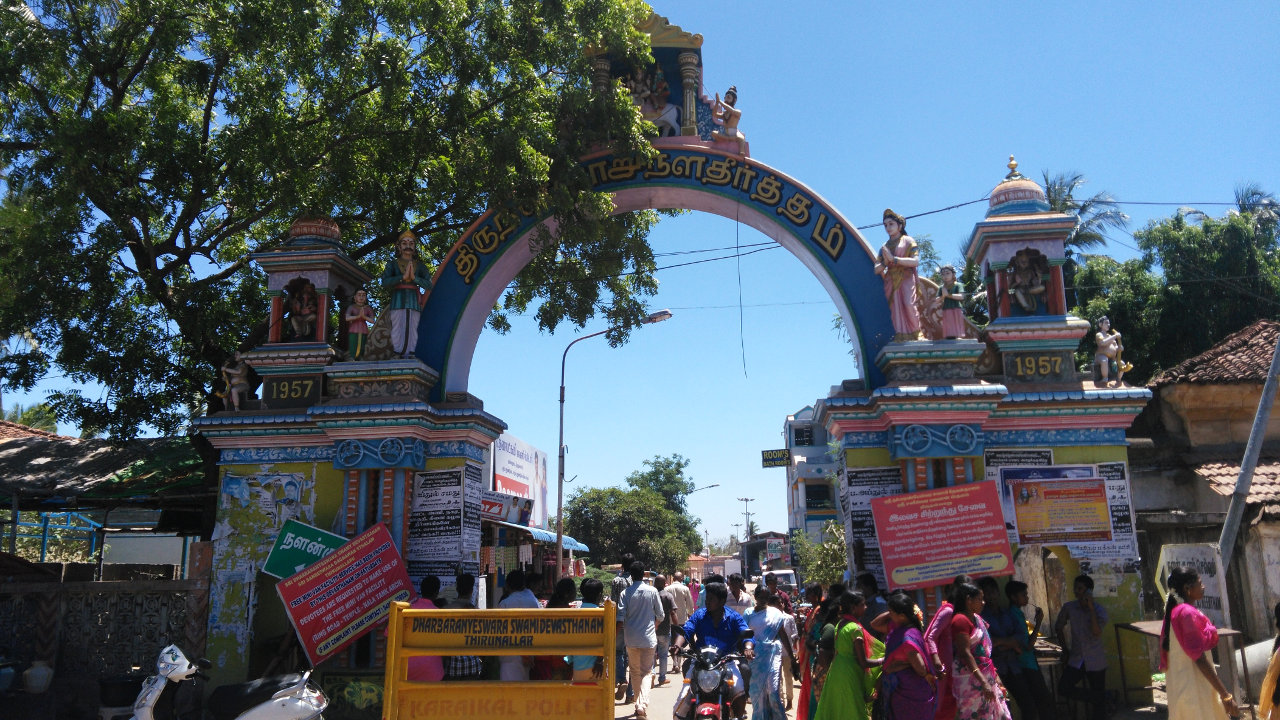 This temple’s sacred plant is “Dharbai”. It is a grass that is used in rituals. According to legend, in ancient times, this region was densely covered with Dharbai plants. It is believed that the lord of this temple appeared in the midst of these plants. The lingam looks as if it is created out of a bunch of Dharbai leaves. Hence the lord is known as “Sri Dharbharanyeswarar” and the place gets the name “Dharbaranyam”.

King Nalan was a ruler of the Nidatha kingdom who married Damayanthi, the princess of Vidharba kingdom. Nalan was under the influence of Sani dosha and had to undergo several ordeals. He was advised by Sage Bharatwaj to visit this place, take a dip in this temple’s Theertham and worship Lord Shiva. It is believed that when Nalan entered the sanctum to worship the lord, Sani left him there itself as Sani was afraid to enter into the sanctum along with Nalan. In his hymn, Saint Thirugnanasambanthar mentioned about Nalan’s worship – he worshiped the lord with flowers, dheepam and sambirani.

Lord Shiva not only relieved Nalan from Sani’s grip but also gave Sani the title of lord and asked him to stay here itself. Hence Sani is known as “Sani Eswarar” and this place gets the name “Thiru Nalan Aru” (“Thiru” a prefix for respect, “Nalan” refers to the king and “Aru” means healing in Tamil). Over a period of time this name has changed to Thiru Nallaru. Saneeswararn is also known as “Sanaicharan”. 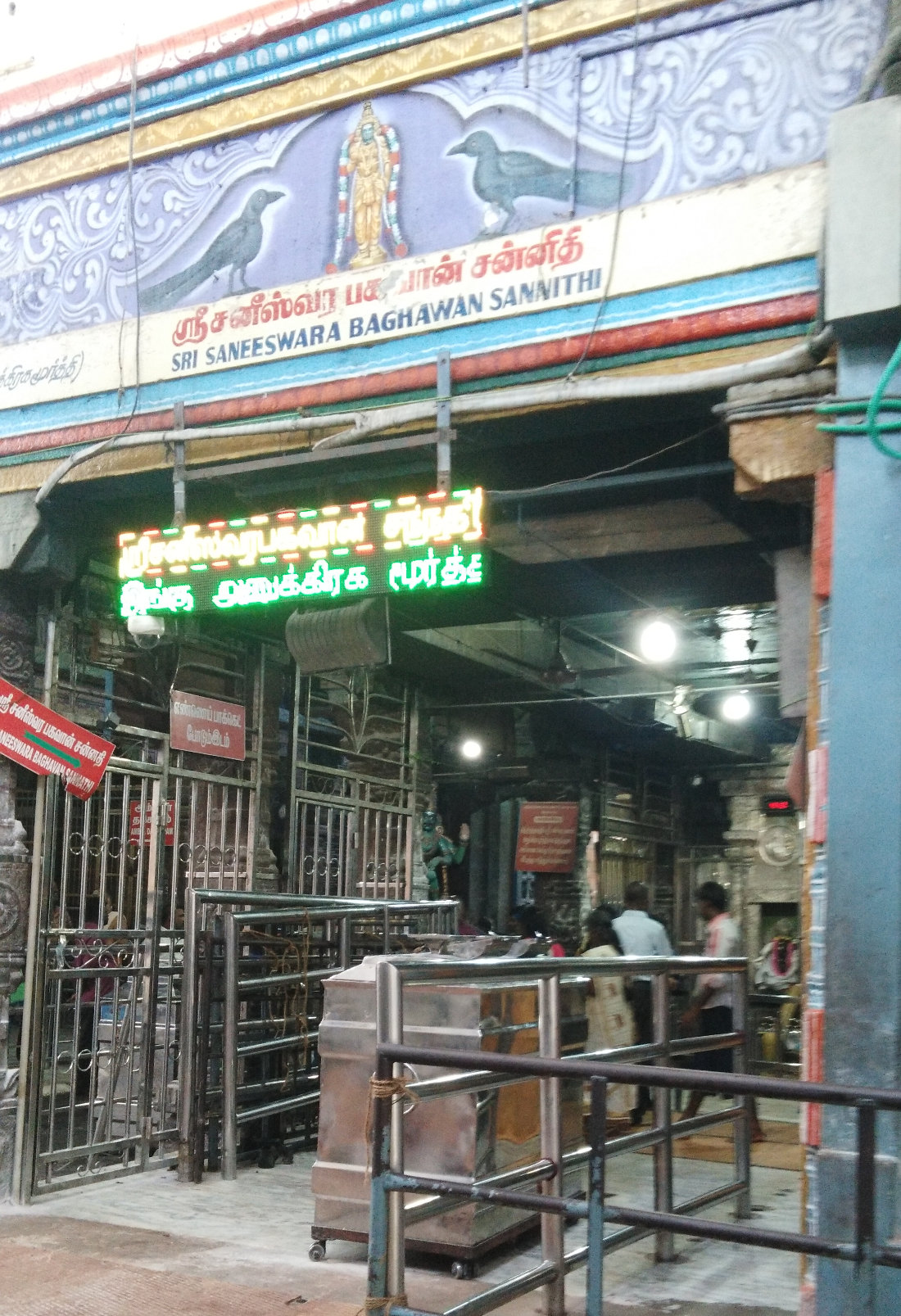 Saneeswarar on his crow mount (golden)

Another legend associated with this temple is that of a shepherd (Idayan in Tamil). On the instructions of the local king, a shepherd used to supply milk to this temple regularly. The accountant of this temple used to send some of the milk to his home and falsify the teple’s accounts. Once, when the king came to know that no milk had reached the temple, he wanted to punish the shepherd. The shepherd prayed to the lord for help. It is believed that in order to save the shepherd and punish the accountant, Lord Shiva sent his lance (trishul) from his sanctum. The trishul punished the accountant and the lord appeared and gave darshan to the shepherd.

To give way to the trishul, the Nandhi and the Balipeet moved from their original positions. Hence, in this temple, Nandhi and Balipeet are not in their regular positions i.e. on a straight line to the main deity, but are placed slightly on one side.

There is a separate shrine for “Idaiyanar” where idols of the shepherd, his wife and the accountant can be seen. 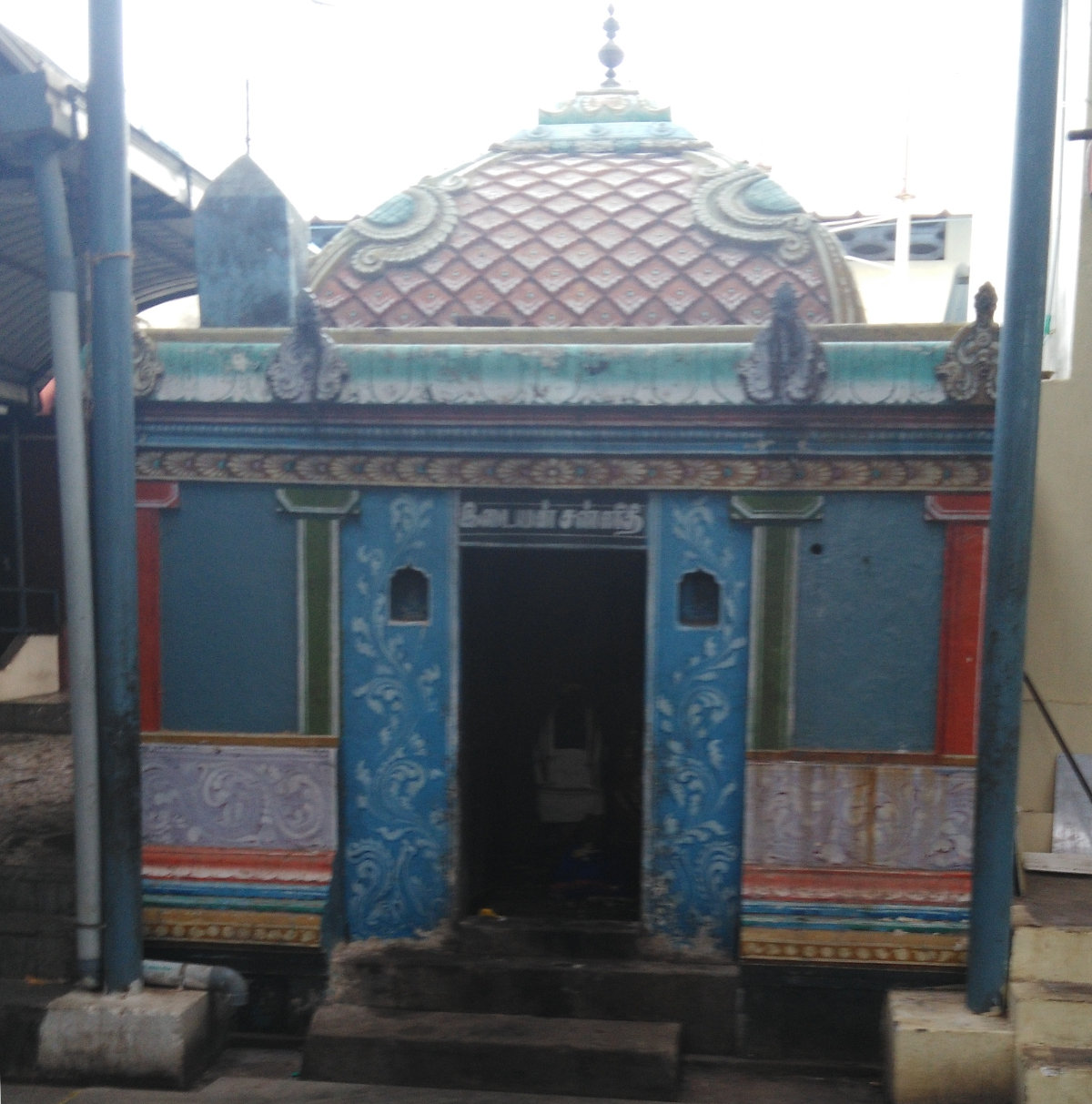 Another legend is Lord Mahavishnu worshiped the lord here for “Santhana Prapthi” (child boon). He was blessed with a child called Manmadan. At the time of granting darshan to Lord Mahavishnu, Lord Shiva was accompanied by Goddess Parvathy with Lord Murugan in between them. Pleased with that form of darshan, Lord Mahavishnu named that posture as “Somaskanda Murthy” and requested Lord Shiva to stay here and bless other devotees as well. It is believed that this posture called “Somaskandar” originated from Thirunallaru.

Lord Indra was also seeking a child. When he came to know that Lord Mahavishnu had been blessed with a child, he sought his advice. Lord Mahavishnu gave Lord Indran the Shivalingam that he had used for worship. Indran started worshiping the lingam in his celestial world and was blessed with two children namely Jayanthan and Jayanthi.

It is believed that once Saint Thirugnanasambanthar agreed to a debate with Samanars in order to prove the superiority of their respective religions.  This debate was conducted in front of the King Koon Pandiyan of Madurai. As part of their debate, both parties agreed to the contest of “Anal Vatham”. The rules of this contest stipulated that slokas were to be written on a palm leaf and put in fire. Whosoever’s palm leaf remained unscathed in the fire would be declared the winner and their religion would be declared superior. The palm leaf that the Samanars put in the fire was destroyed instantly. However, when Thiugnanasambanthar wrote the Pathigam of Thirunallaru (“Bohamartha poon mulaiyal”) on a leaf and put it in the fire, it came out unscathed. Thereafter, king as well as the Samanars accepted Thiugnanasambanthar as the victor and converted to Hinduism. Hence this pathigam is known as “Pachchai Pathigam” (“Pachchai” means green in Tamil). This pathigam is considered very auspicious.

The legend is that Lord Mahavishnu used to keep a “Maragatha Lingam” (lingam made of Emerald) for his worship. Later he gave it to Lord Brahma and then to Lord Indra. Indra worshiped that lingam for a long time. The Chola King Muchukunda Chakravarthy, who had the face of a monkey, was a king known for his valour. He had once helped Indra defeat the demon Valasuran. Indra wanted to present something and asked Muchukunda what he wanted. Muchukunda, being a staunch devotee of Lord Shiva, asked for that Emerald lingam. However, Indra was not willing to part with it. So, he had six similar lingams made and asked Muchukunda to select any one of them. Muchukunda prayed to Lord Shiva and was able to select the original idol. Impressed with his devotion, Indra gave him all the seven idols to Muchukunda. Muchukunda kept these idols in seven temples which are called “Seven Vidanga Sthalams”. However, he kept the original one at Thiruvarur. “Vidanga” means something that has not been chiselled.

Another interesting aspect about all these temples is that the “Vidangar” is believed to be the ruler of all the planets. For this reason, all the idols of Navagraham are seen in a straight line facing Lord Shiva. In some temples, they are in their usual matrix, but still all of them face the lord.

In all these seven temples, the main deity of the temple (“Moolavar”) is different from the “Vidangar”.

These seven Vidanga sthalams, name of the Vidangar and the name of the dance (Nadanam) related to each of these places is as follows:

Other than the shrines of Lord Shiva and Goddess Parvathy, shrines and idols of lords Swarna Ganapathy, Murugan, Natarajar, Somaskandar, Kalahasthi Nathar, Pitchandavar, Nalvar, 63 Nayanmars, Adhisheshan, Nalanarayana Perumal, Mahalakshmi, Suryan and Bairavar can be seen in the corridors. Idols of King Nala and the lingam worshiped by him are placed next to 63 Nayanmars.

In the “koshtam” (place surrounding the sanctum sanctorum), idols of Vinayakar, Dakshinamurthy, Lingothbhavar, Brahma, Durgai and Chandikeswarar can be seen.

The lingam worshiped by King Nalan (Sri Naleswarar), Shivalingams in the names of rest of the Saptha Vidanga temples and the lingams worshiped by Ashtatik Balakas can also be seen in the corridors.

There is a separate shrine for the Emerald lingam, Sri Thyagaraja Vidangar. 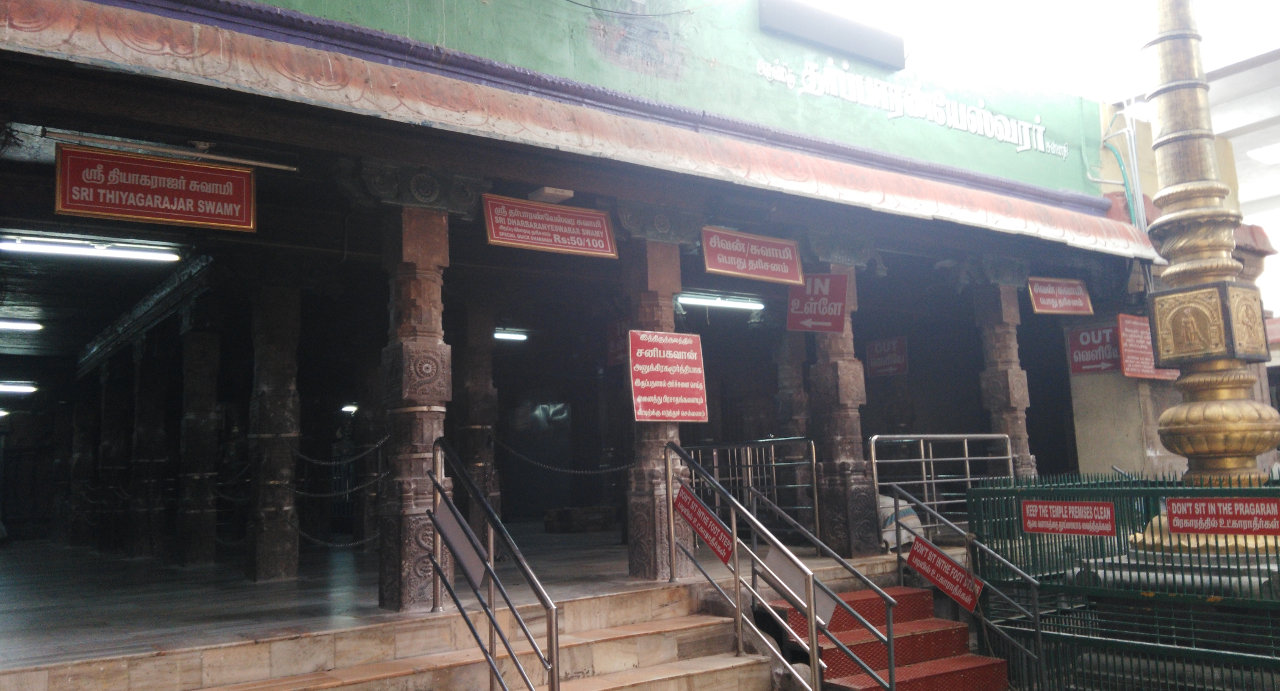 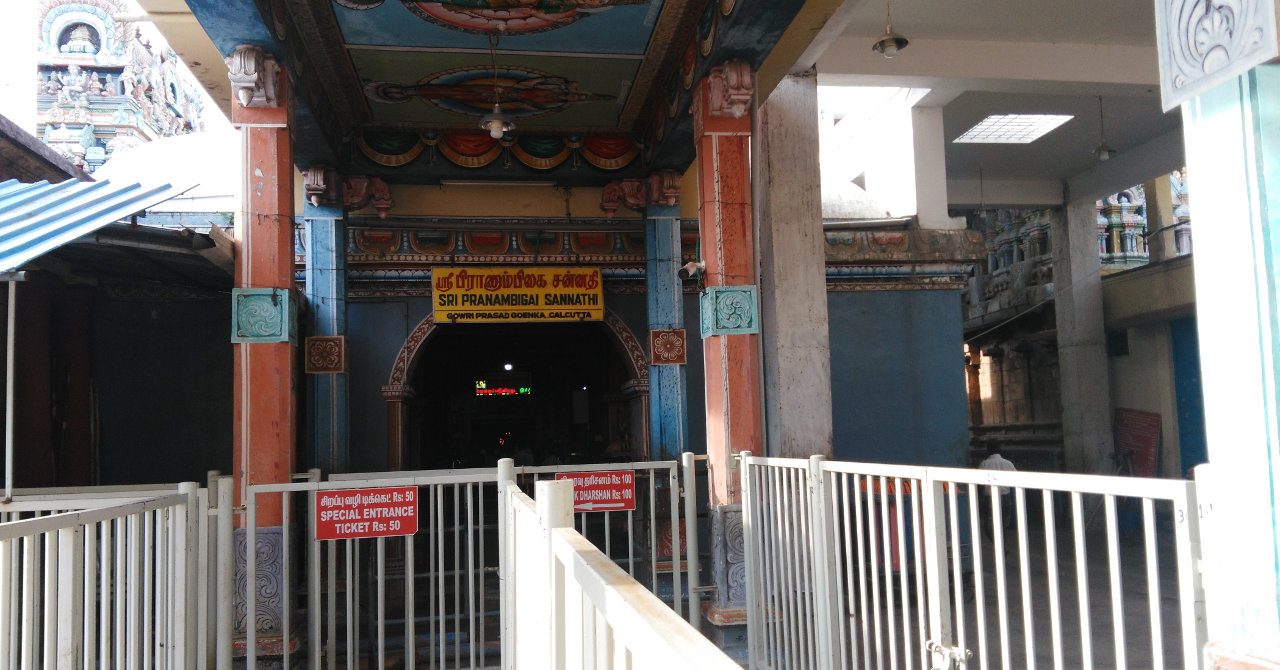 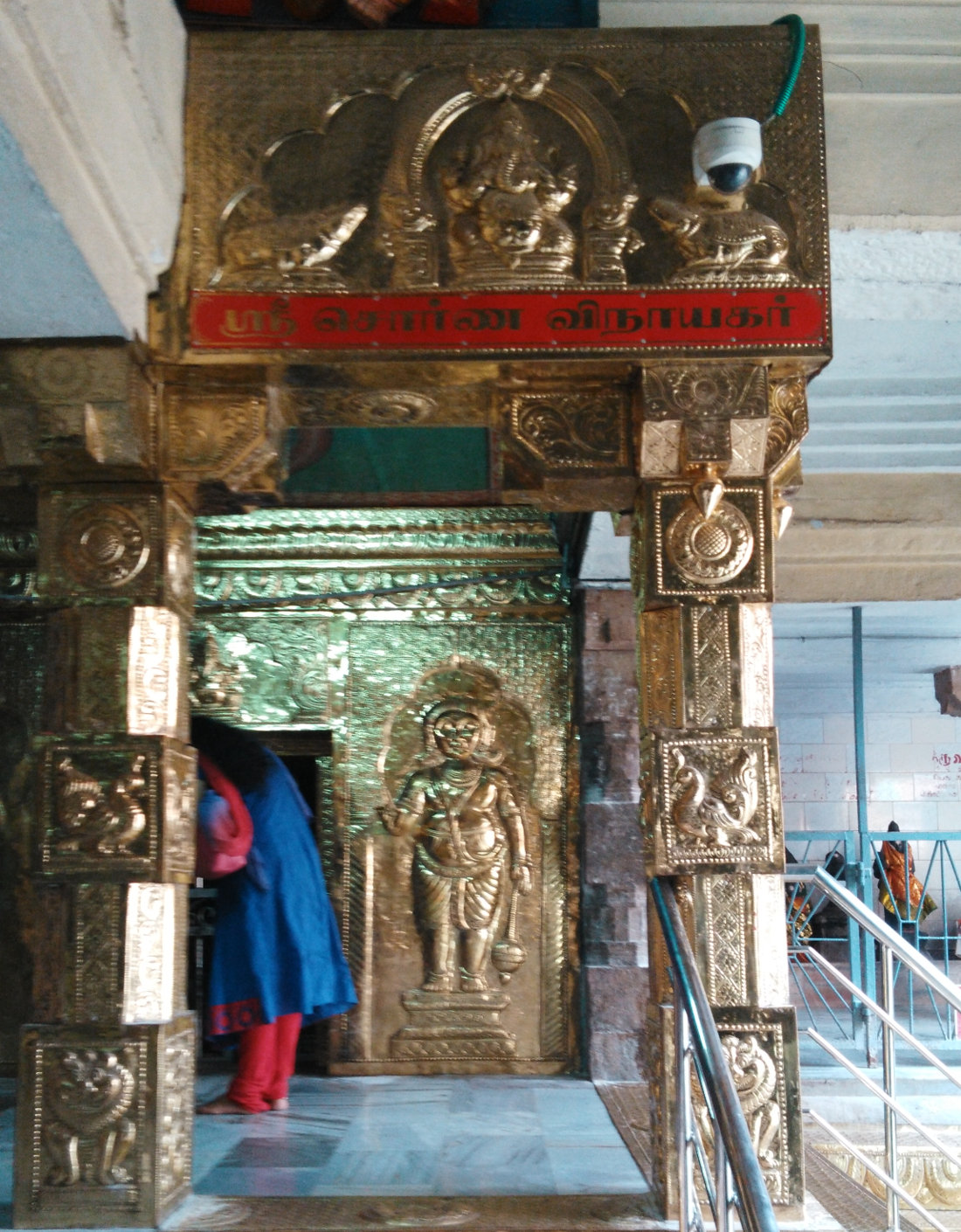 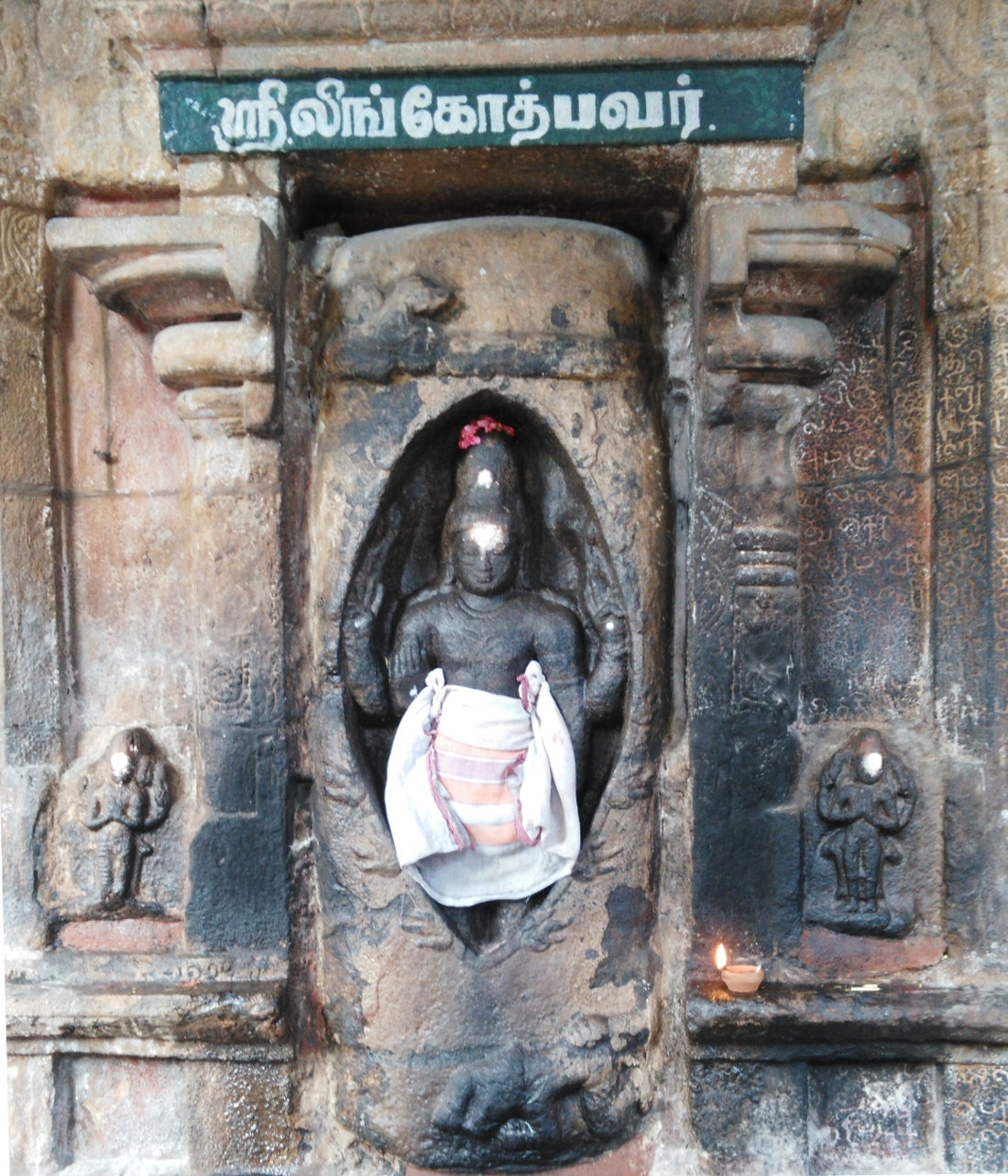 Thirunallaru is famous for its Theerthams and is known as Theertha Sthalam. There are many theerthams associated with this temple - Nala, Brahma, Vaani, ashtathik balakas (eight theerthams), Anna and Ganga Theertham. 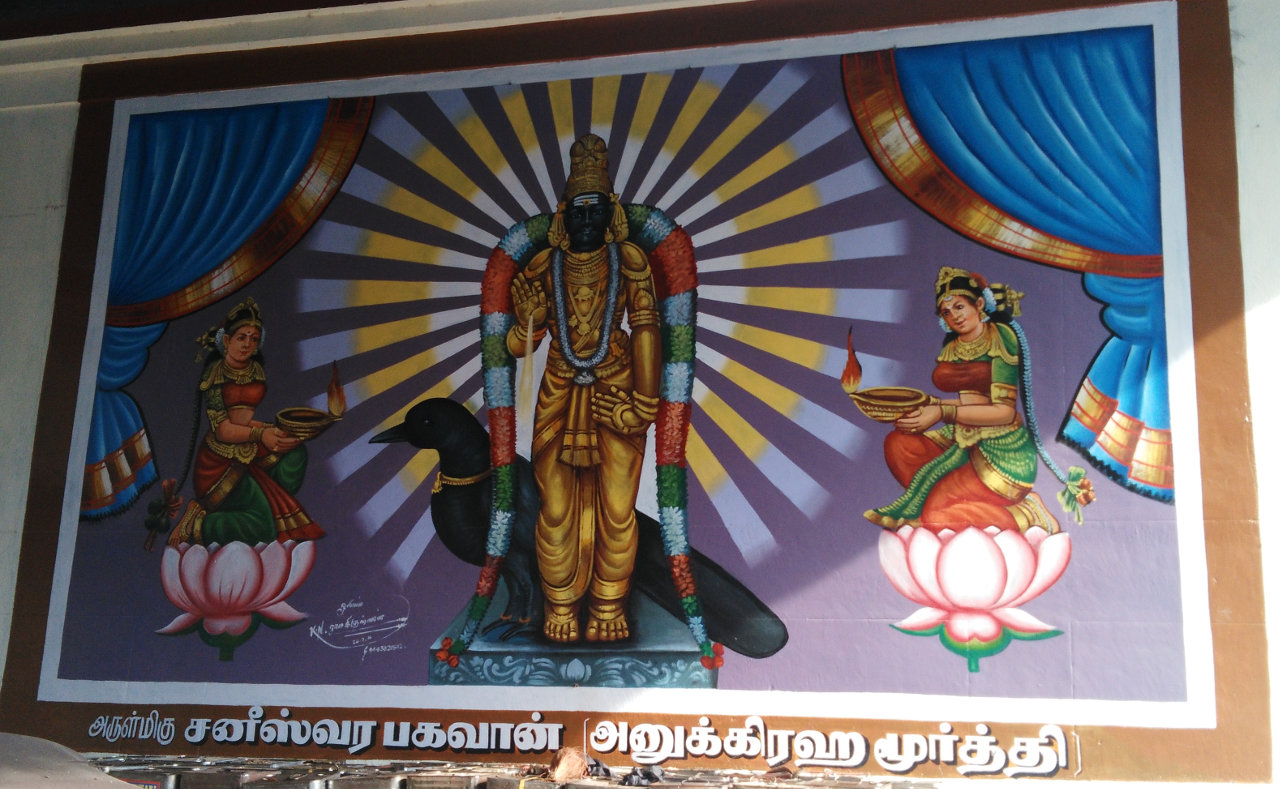 Another unusual fact is that in this temple the Saneeswaran idol only has two hands and the right-hand holds the “Abhaya Mudra”. In most other temples, the idol of Lord Saneeswaran usually has four hands. The significance of the Abhaya Mudra is that it is supposed to dispel fear. In Sanskrit, “Abhaya” means “fearlessness”. This mudra symbolizes protection, peace, and the dispelling of fear.

Devotees believe that by worshiping the lord here, all “doshas” related to “Sani” will be removed. Devotees are advised to worship the lord of this temple in the following manner – take a dip in the Nala Theertham, worship Vinayagar and Bairavar on the banks of the Theertham, worship Nala Narayana Perumal on the way to this temple, worship Lord Shiva and Goddess Parvathy and then finally worship Lord Saneeswaran.

As Lord Mahavishnu was blessed with a child here, it is believed that those seeking “santhana prapthi” (child boon) can worship Lord Shiva of this temple.

Devotees believe that worshiping the lord here after taking a dip in the Brahma Theertham will lead to removal of all the sins from their previous birth.

Students can take a dip in the Vaani theertham and worship the lord here to excel in their education.

The important festival here is the transition of Saturn. It happens once every two and a half years. Lakhs of devotees visit this place to worship Lord Saneeswaran on this transition day (“Sani Peyarchi”).

Also, on all Saturdays, devotees throng in thousands to worship Saneeswaran as Saturdays are considered to be very auspicious for Lord Saneeswaran.

On the full moon night in the Tamil month of Purattasi (Sept-Oct), special poojas are performed to the Emerald Lingam.

18-day Brahmotsavam in the Tamil month of Vaikasi (May-June) is celebrated in a grand manner.

All festivals related to Shiva temples are celebrated in this temple. 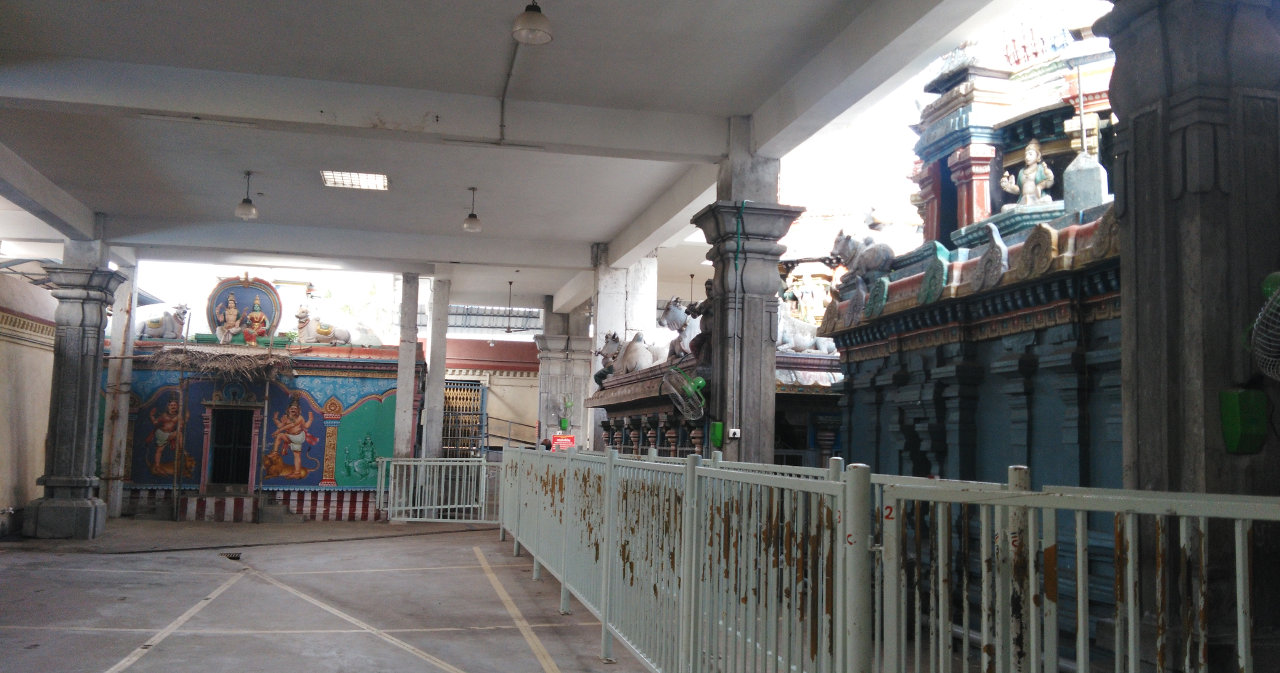 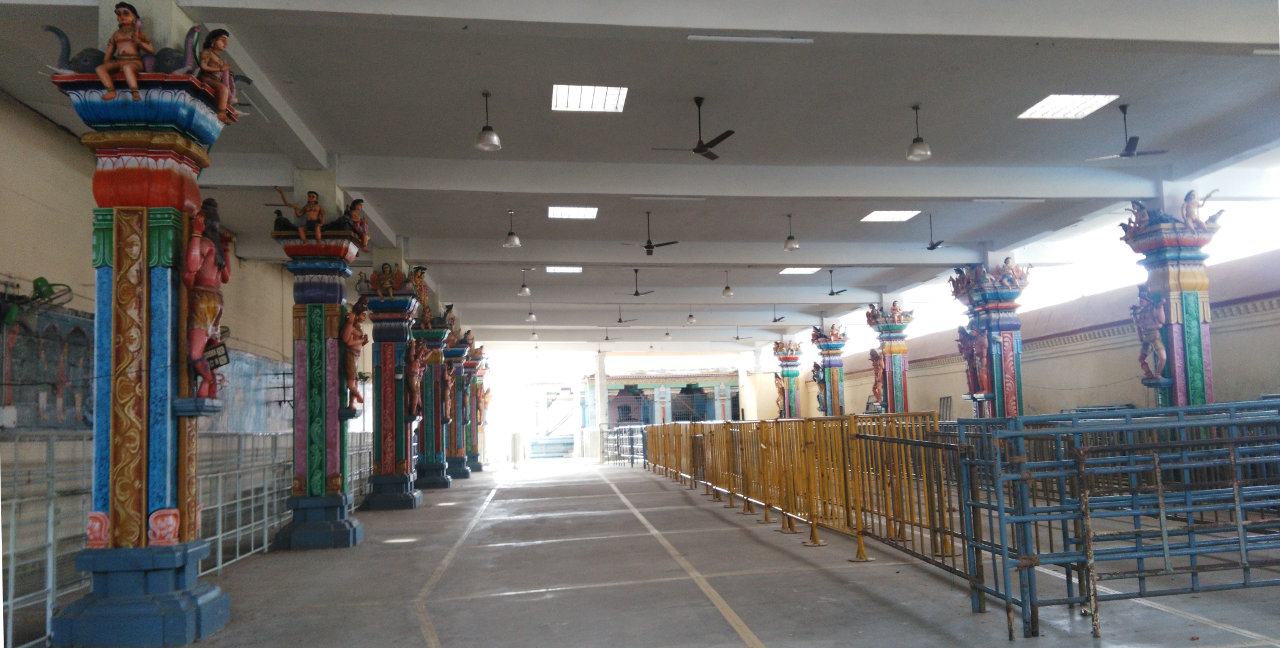 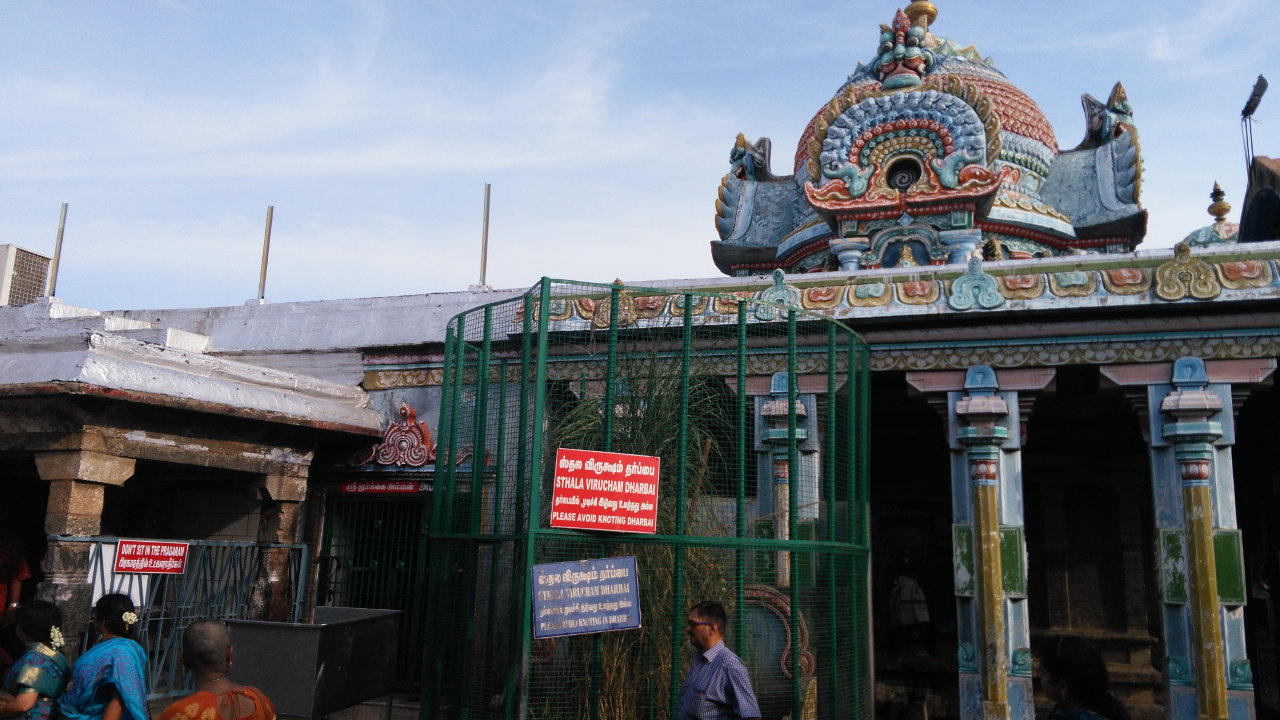 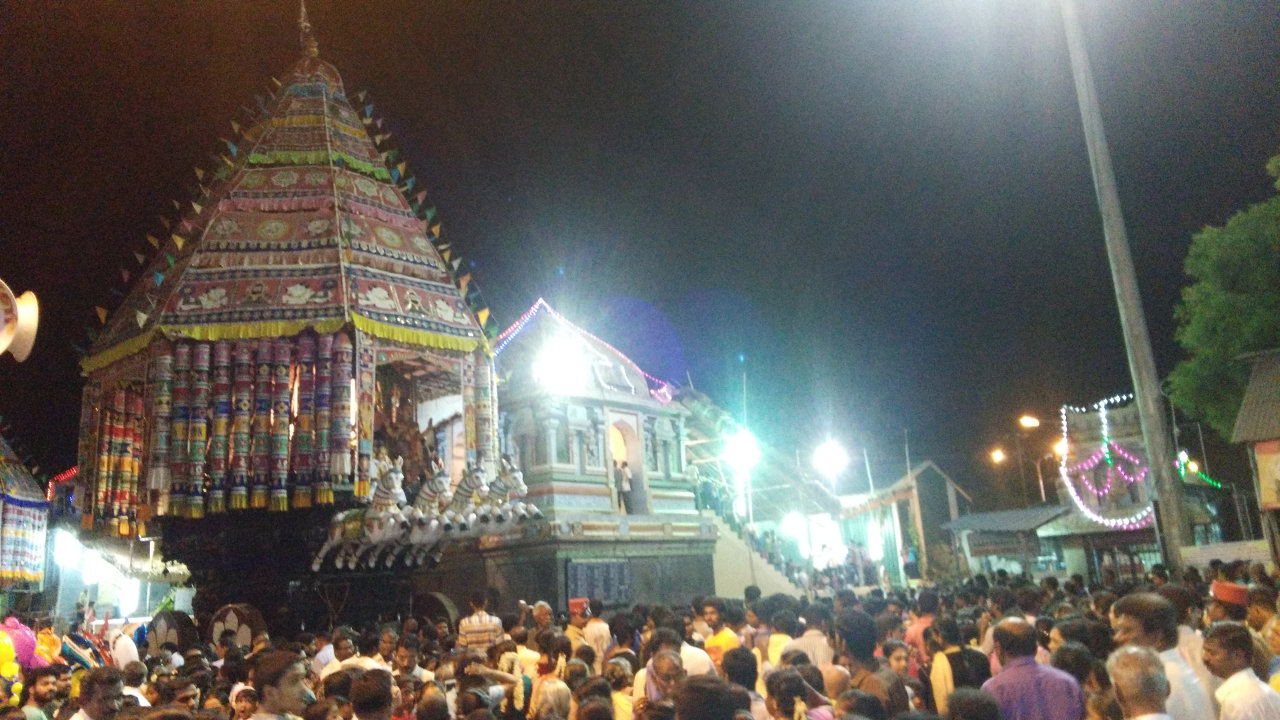