Sirkazhi is situated at a distance of about 20 kms from Mayiladuthurai and 19 kms from Chidambaram. It is on the Chidambaram to Kumbakonam route.

Sirkazhi has a railway station and this temple is about 2 kms away from the station.

This ancient temple is more than 1500 years old.

This is the birth place of saint Thirugnanasambanthar. There is a separate temple for him in Sirkazhi.

The name Sirkazhi is derived from Goddess Kali, as she is believed to have worshiped the lord here (“Sree” is a respectful prefix and “Kali” refers to the goddess).

This is one of the 27 temples that are under the administration of the Dharumapuram Aadheenam.

It is believed that there was once a great deluge that submerged the entire earth. During this incident, Lord Shiva is believed to have carried the 64 arts with him on a raft (“Thoni” in Tamil) and reached this shrine where he stayed with Goddess Parvathy. Hence this place gets the name, “Thonipuram” and the lord is praised as “Sri Thoniappar”.

Lord Bhairavar (Sattainathar), who is believed to have quelled the arrogance of Lord Thrivikrama (Ulgalantha Perumal) after his show of dominance over the three worlds (the emperor Mahabali’s destruction), is worshiped here every Friday night. A special pooja is conducted in this temple for Sri Sattainathar on every Friday that continues till midnight. It is considered very auspicious to worship the lord at this time.

There is also a separate temple for Sri Ulgalantha Perumal in Sirkazhi.

According to legend, that Saint Thirugnanasambanthar was born in this place during the 7th century. Sambanthar was born in a Brahmin family to Sivapada Hrudayar and his wife Bhagavathiar. Once when Sambanthar was about three years old, his father had taken him to a nearby Shiva temple. When his father had gone to take a dip in the “Brahma Theertham” (the temple’s tank), young Sambanthar started crying. Noticing the crying child, Lord Shiva and his wife Goddess Parvathi appeared before him. It is believed that Goddess Parvathi fed him with wisdom milk (Gnanappaal).  When Sambanthar’s father returned, he was astonished to see drops of milk on the child's mouth. He asked him who had fed him, whereupon the boy pointed to the sky and responded with a song “Thodudaya Seviyan” - the first hymn and verse of the revered Devaram.

Sambanthar is also regarded as an incarnation of Lord Murugan. He is praised as "Ilaya Pillayar" (younger son) and is also affectionately called “Aaludaya Pillayar”. 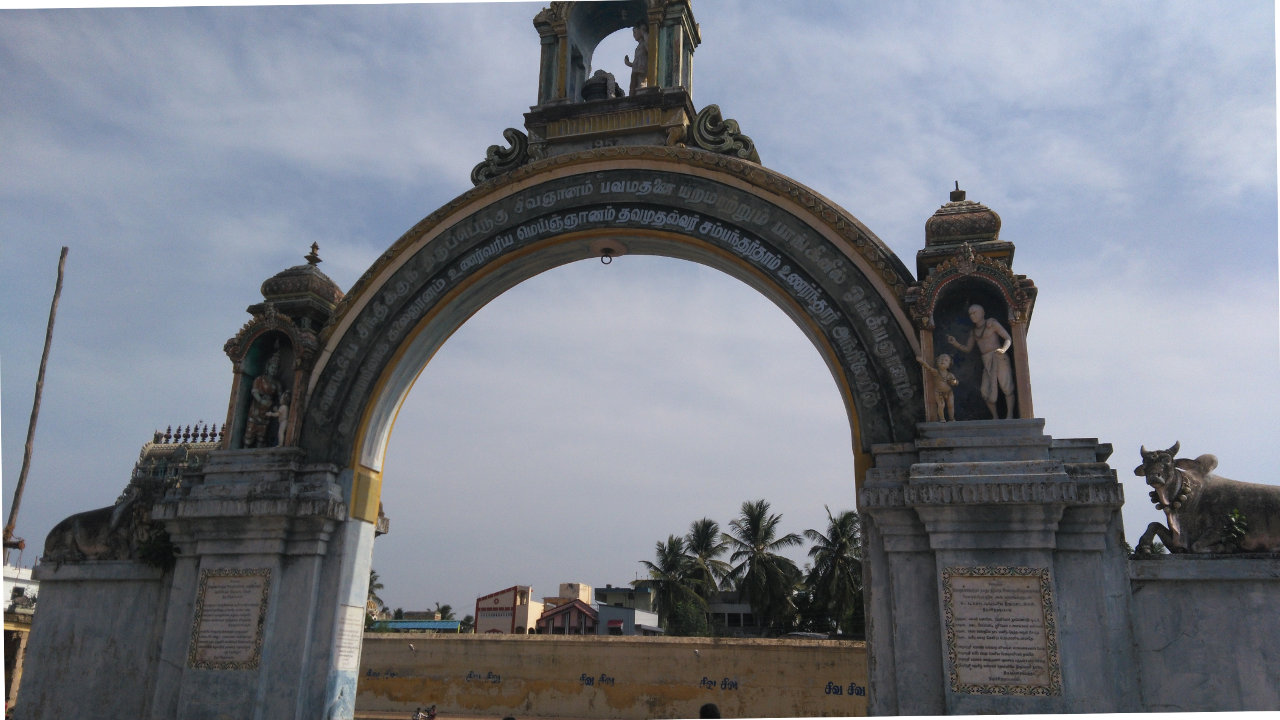 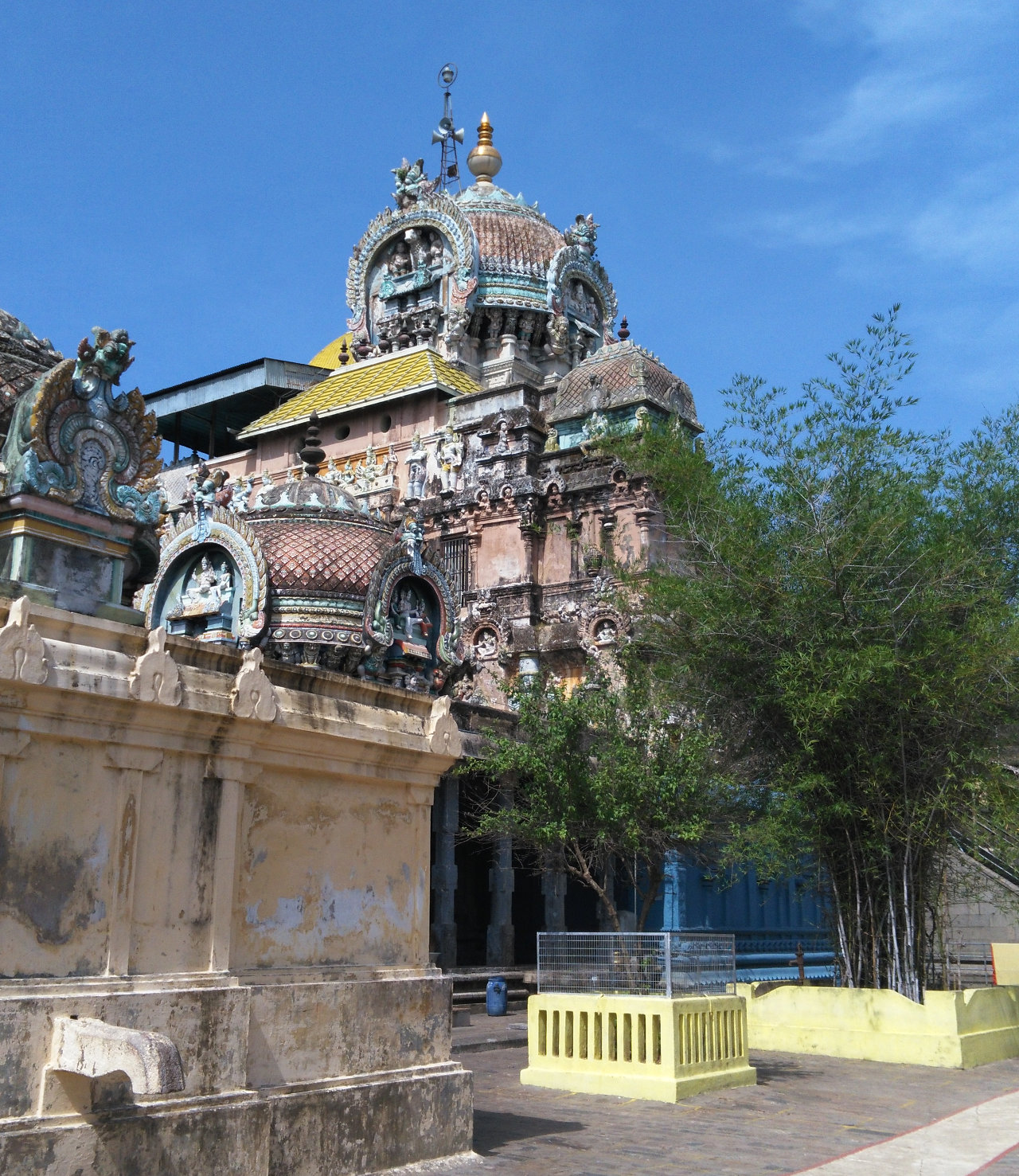 Other than the shrines of the main deities, shrines and idols of lords Vinayakar, Murugan, Somaskandhar and the 63 Nayanmars can be seen in the corridors.

There is a separate shrine for Thirugnanansambanthar located next to Lord Shiva's shrine. This temple has a beautiful procession idol that depicts Sambanthar as a small child holding a cup of milk in his hand.

There are separate shrines for each of the Ashta Bhairavas.

There is a separate two storeyed temple (that looks like a small hill) where Lord Thoniyappar and Sattainathar (Vadukanathar) can be seen. 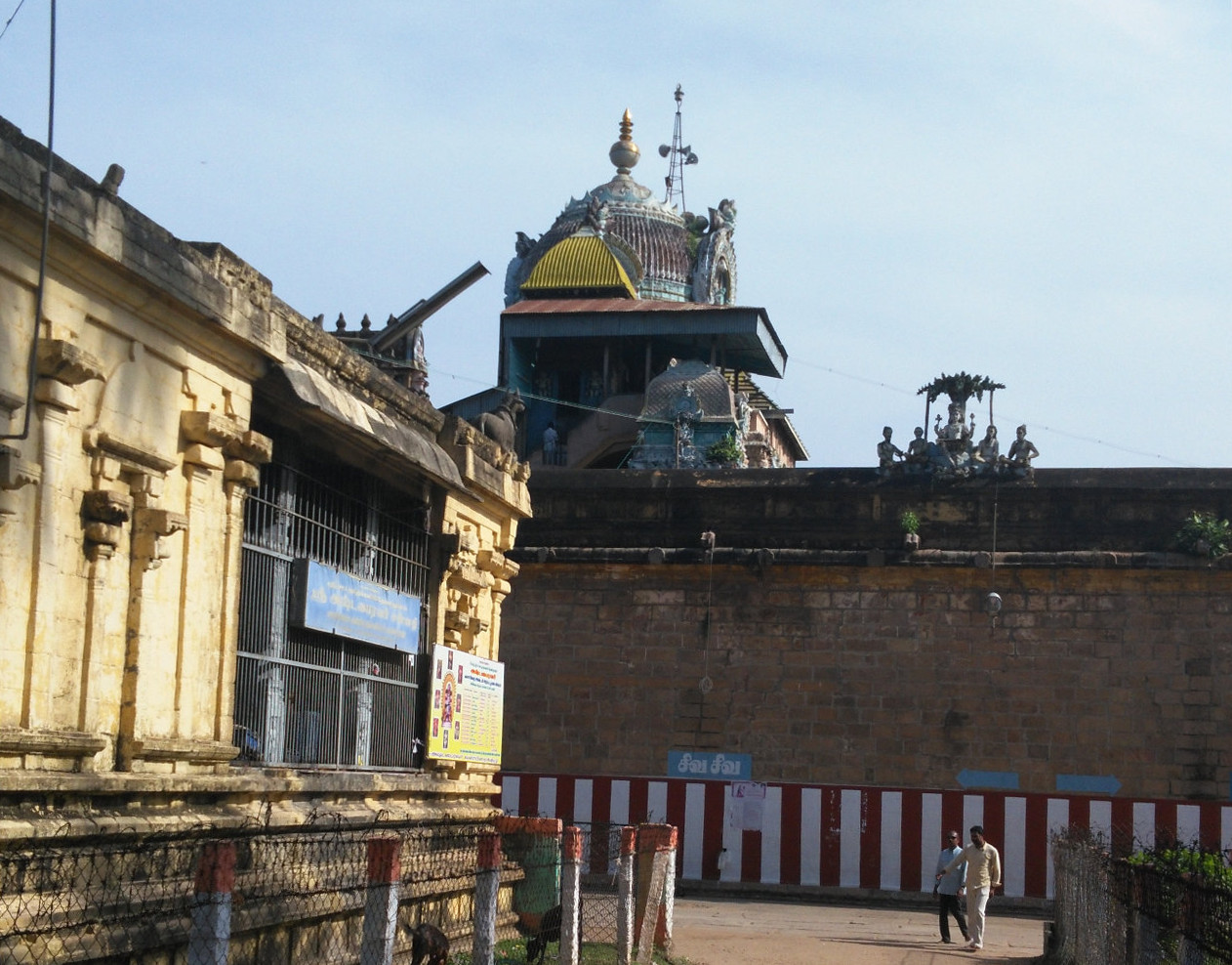 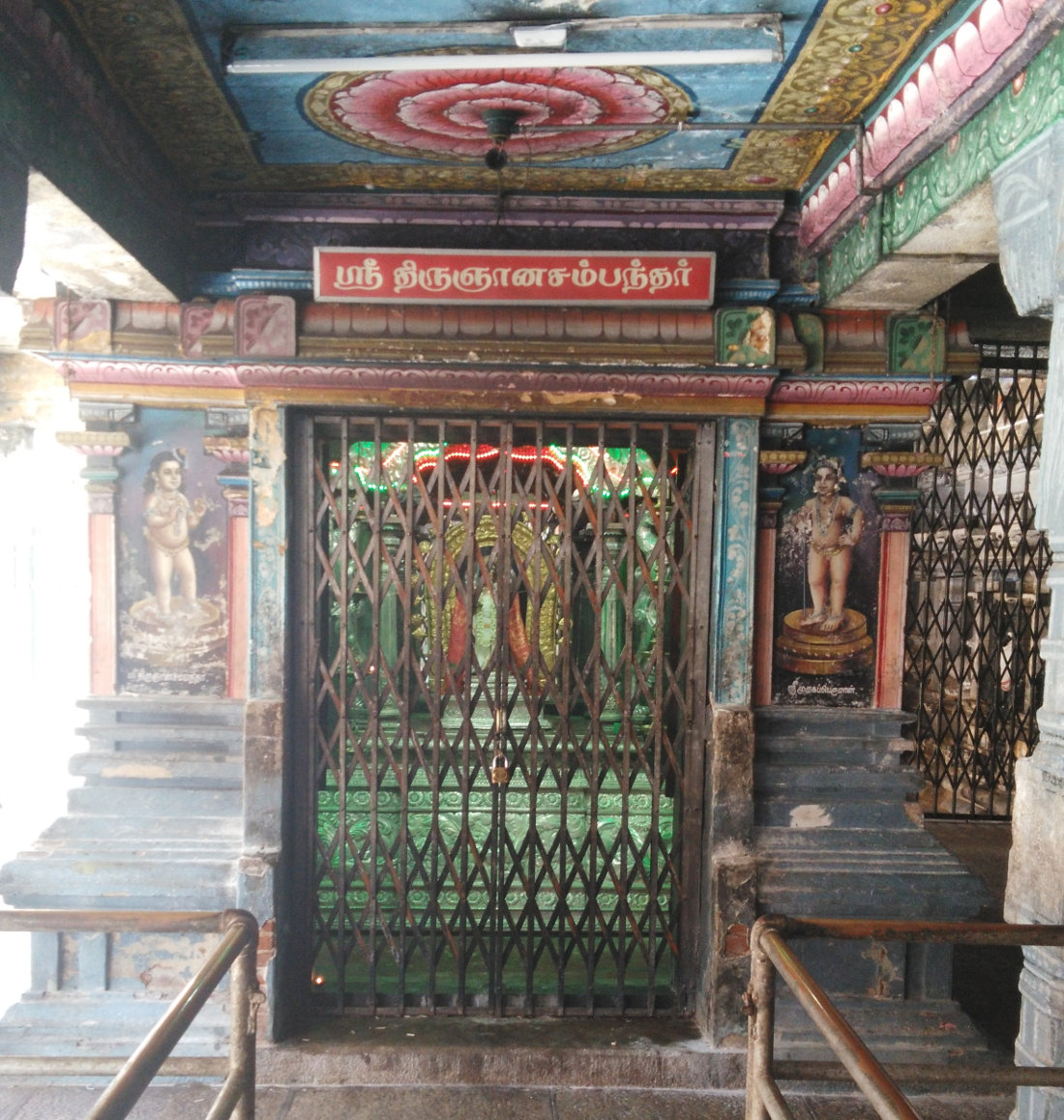 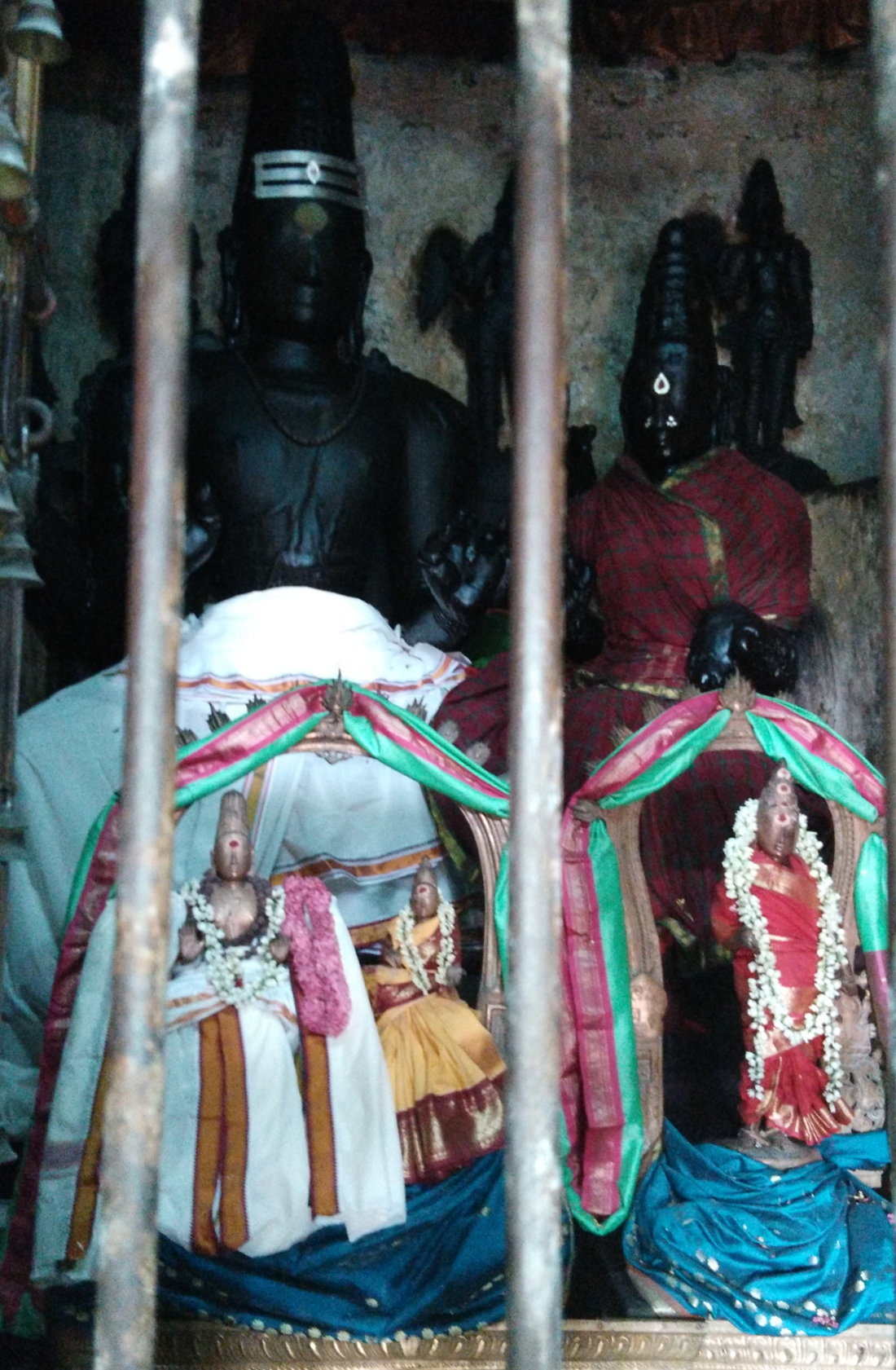 This temple has the highest number of hymns (devara pathigams) rendered by the Moovar -  a tall number of 71 hymns.

It is believed that there are 22 sacred water bodies (Theerthams) associated with this temple.

Lord Shiva graces here in three forms - as Brahma, Vishnu and Shiva. It is believed that they granted darshan to Saint Thirugnanasambanthar. This place is also revered as “Gurumurtham”.

Lord Bhairava of this temple is considered to be as significant as the one in Kasi-Varanasi. Special pujas are performed for him here on Ashtami days (eighth day of new moon or full moon fortnight).

As Lord Shiva of this temple is considered to be the maker of all laws (“Sattam” in Tamil), he is also praised here as Sri Satta Nathar.

In the third tier, Sri Bhairavar is present as Sattainathar. He is in the unified form (“Sankamam”).

On one particular day during the 10-day Brahmotsavam festival, the procession idol (Utsavamoorthy) of Saint Thirugnanasambanthar is taken to Sri Thiruthalamudaiyar temple at Thirukkolakka. This is another Devara Paadal Petra Sthalam situated on the outskirts of Sirkazhi.  It is believed that here Sambanthar was blessed with the golden plates (Thalam) by the lord and Goddess Parvathy infused divine music into it. This incident is symbolically celebrated on this day here. Thereafter, the procession idol of Sambanthar is brought back to Sirkazhi temple in a flower-bedecked palanquin (“Poo Pallakku”).

The entrance to the Brahma Theertham (tank) has some beautiful sculptures depicting Lord Brahma’s worship, Saint Sambanthar receiving milk from Goddess Parvathi and the saint pointing towards the lord.

Since Sirkazhi is the birth place of saint Thirugnanasambanthar, saint Sundaramurthy Nayanar considered this place to be so sacred that he did not want to soil it by placing his feet there. When he visited this place, he stayed in the outskirts and rendered his hymn from there. It is believed that Lord Shiva was pleased with his hymns and blessed him with his darshan.

It is from this place that Saint Thiru Neelakanta Yazhpanar, a maestro of the Yazh (a lute) started accompanying saint Thirugnanasambanthar.

This is the birth place of Saint Gananatha Nayanar - one of the 63 Nayanmars.

The Jeeva Samadhi (monument) of Sattai Muni Siddhar, one of the 18 siddhars, is present in this temple with a peeta (stage) above it.

Vanity and arrogance are often considered to be curses. Devotees believe that worshiping the lord here helps them to look past their own ignorance.

Devotees involved in litigation matters seek the lord’s blessings to help them win their cases.

Karthikai Deepam in the Tamil month of Karthikai (November-December),

Thiruvadirai in the Tamil month of Margazhi (December-January),

Shivrathri in the Tamil month of Maasi (February-March),

Aadi Pooram in the Tamil month of Aadi (July-August), 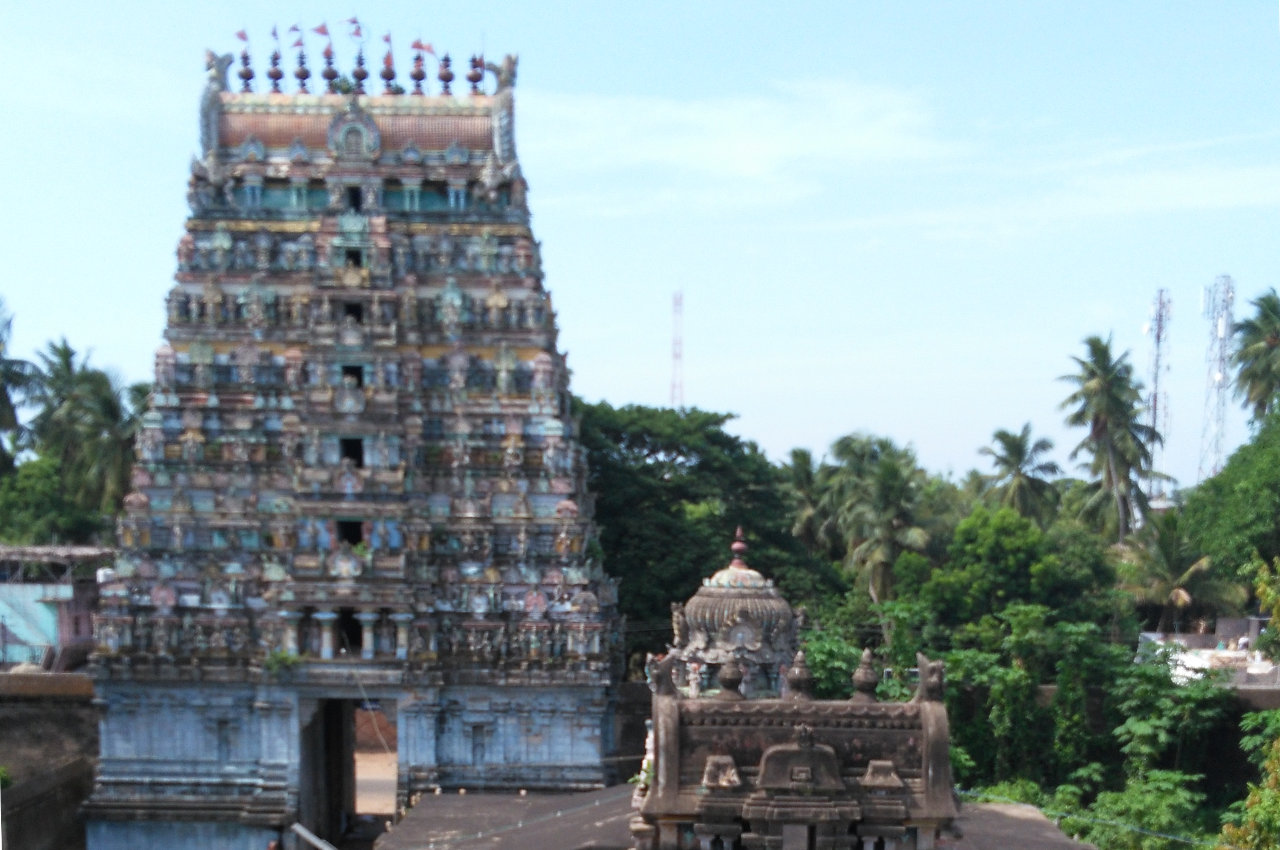