Thiru Kandiyur is situated at a distance of about 3 kms from Thiruvaiyaru on the Thiruvaiyaru to Tanjore route. From Tanjore, this place is about 10 kms away.

This ancient temple is located on the banks of the river Kudamurutti.

The historical names of this place are Aadhi Vilvaaranyam and Tri Moorthy Sthalam.

There are certain stone inscriptions in this temple which date back to the periods of Pallava king Nirupathunga Varman, Chola kings Koppara Kesari Varman, Uthama Cholan and Rajendra Cholan-I.

In Hindu mythology, there are eight special places where it is believed that Lord Shiva vanquished various demons and exhibited acts of bravery. These places are Veeratta Sthalams. In Tamil, this is referred to as “Atta Veerattanam” (“Atta” means eight and “Veeram” means bravery). Thirukkandiyur (this place) is the first Veeratta Sthalam where one of Lord Brahma’s five heads was plucked by Lord Shiva.

The other seven Veeratta Sthalams are – 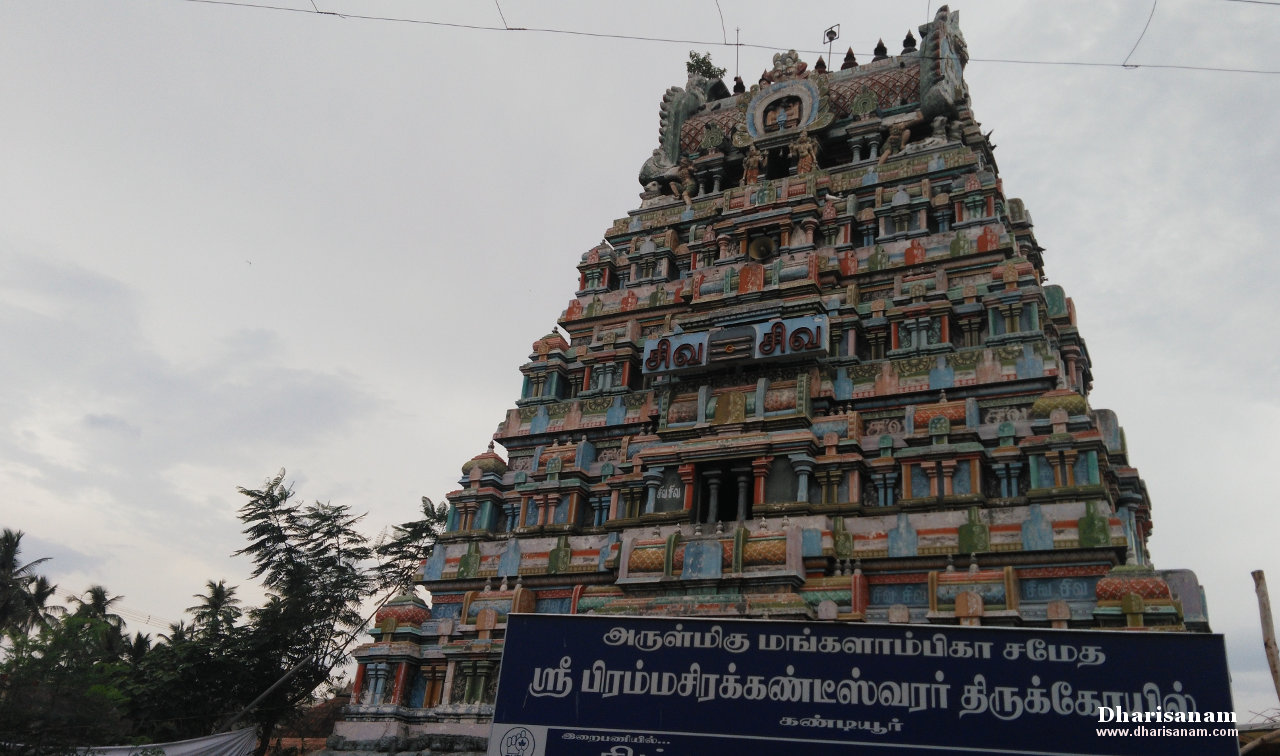 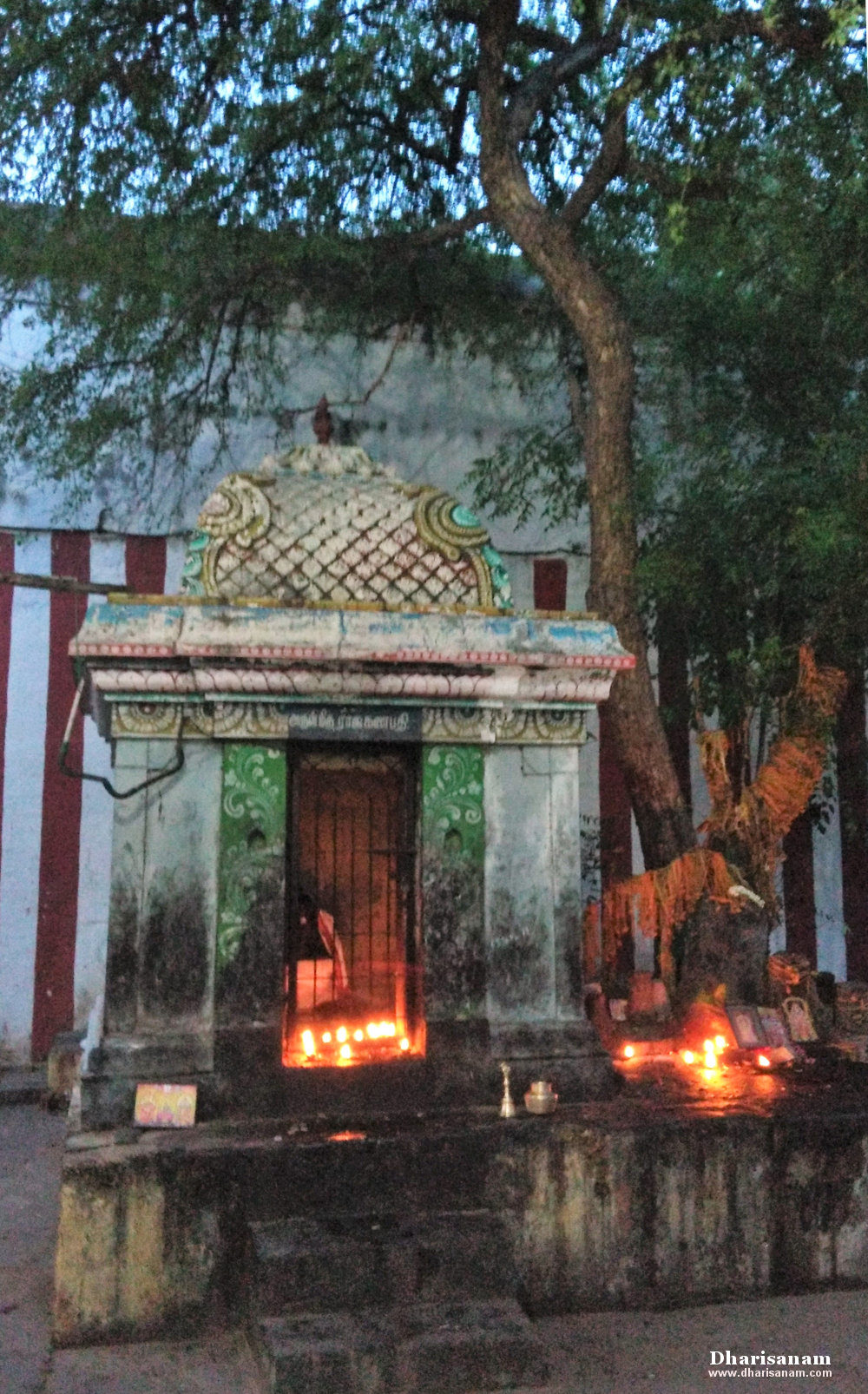 According to legend, Lord Brahma was once very arrogant and vain. He considered himself to be the greatest among all the gods. He also caused a lot of miseries to the other celestial gods (Devas). The celestial gods approached Lord Shiva for help. Upon their request, Lord Shiva took the form of a hunter (“Vaduga”) and removed Lord Brahma’s fifth head using his trident. Lord Brahma then realized his mistake and pleaded to Lord Shiva for forgiveness. The lord pardoned him and blessed him by saying that he would retain his beauty even after loosing one of his heads. He now became “chathur mugam” (lord with four heads). Hence Lord Shiva is praised here as “Sri Brahma Sira Kandeeswarar” and Sri Veerattaneswarar. This place gets the name “Kandana Puram” (“Kandanam” means “to pluck” in Tamil). This was later changed to Kandiyur.

Goddess Saraswathi prayed to Lord Shiva here to bless her with “Mangalya Pakyam” (long life for her husband) which the lord is believed to have granted.

Another legend associated with this temple is that of Sage Sathathaba. The sage used to visit Kalahasthi on all Pradosham days without fail. However, when he had reached this place he realised that he would not be able to reach Kalahasthi in time for darshan.He prayed to Lord Shiva here who in turn gave him the same dharshan that he would have received in Kalahasthi.  It is believed that Lord Shiva brought a vilva tree from Mount Kailash for Sage Sathathaba. Hence this place also gets the name “Aadhi Vilvaaranyam”.

Another legend is that Guru Dronacharya worshiped the lord here to seek child boon. It is believed that Lord Shiva blessed him with a child.

Other than the shrines of Lord Shiva and Goddess Parvathy, shrines and idols of Saptha Vinayakar, Murugan with his consorts, Natarajar, Mahalakshmi, Suryan, Chandran, Sadadhaba Rishi, Kalpa Suryan, Kailasanathar, Kalahastheeswarar, Skanthaguru, Gnanaguru, Panchapootha Lingams, Lingams representing all the seven Sapthasthanam remples, Bairavar, Navagraham and Chandikeswarar can be seen in the hall and in the corridors.

A small idol of “Sri Vadugar” can be seen near the entrance door of Lord Brahma’s shrine.

Goddess Parvathy and Lord Dandapani’s shrines are in the outer corridor.

There is a separate shrine for Goddess Kaali.

The idol of Raja Ganapathy is seen under the Vilva tree (this temple’s Sthala Viruksham). 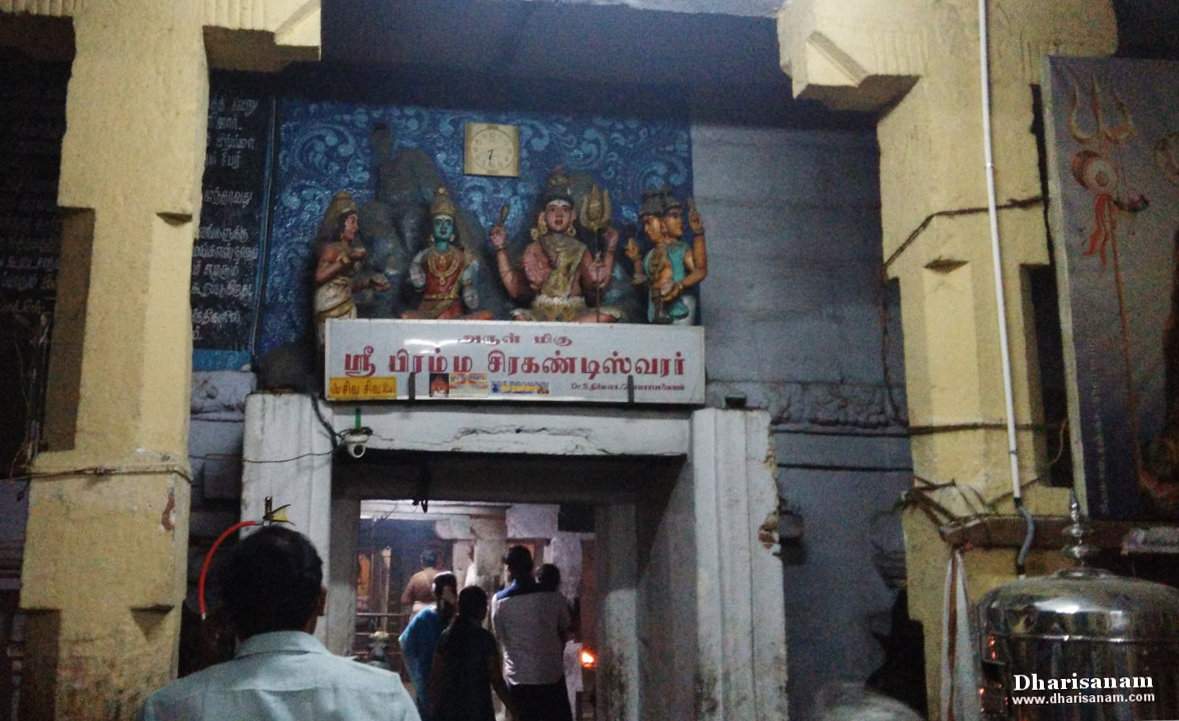 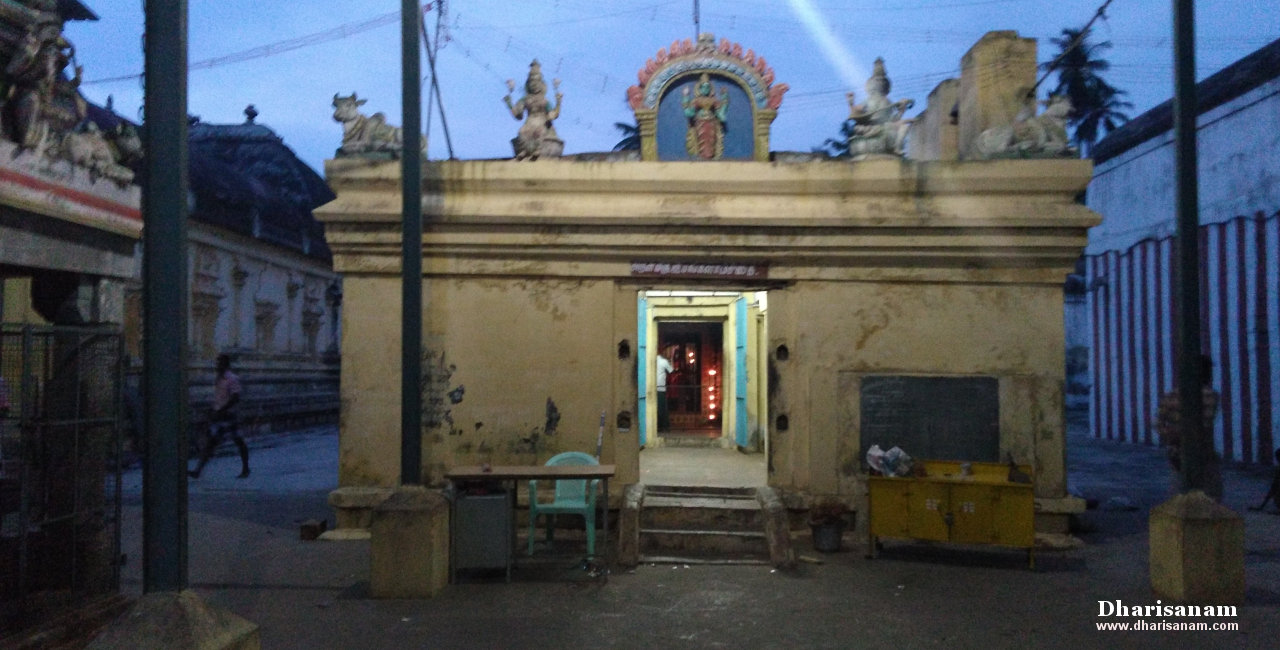 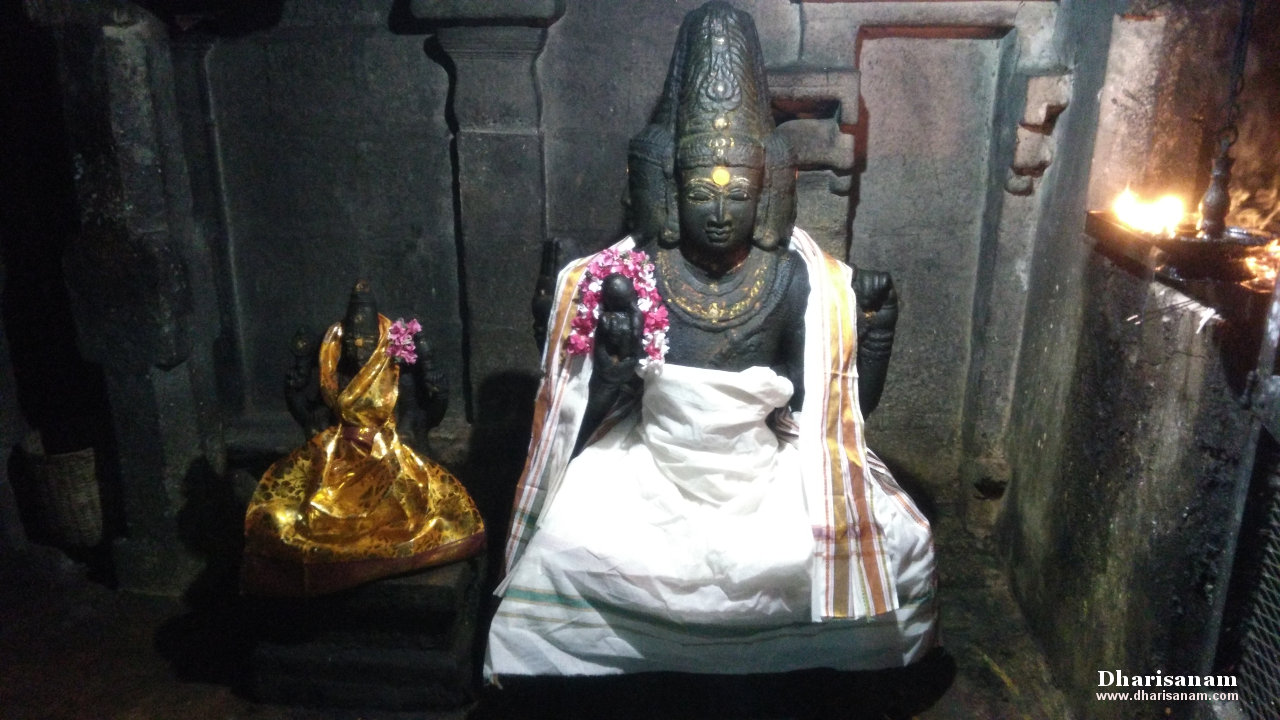 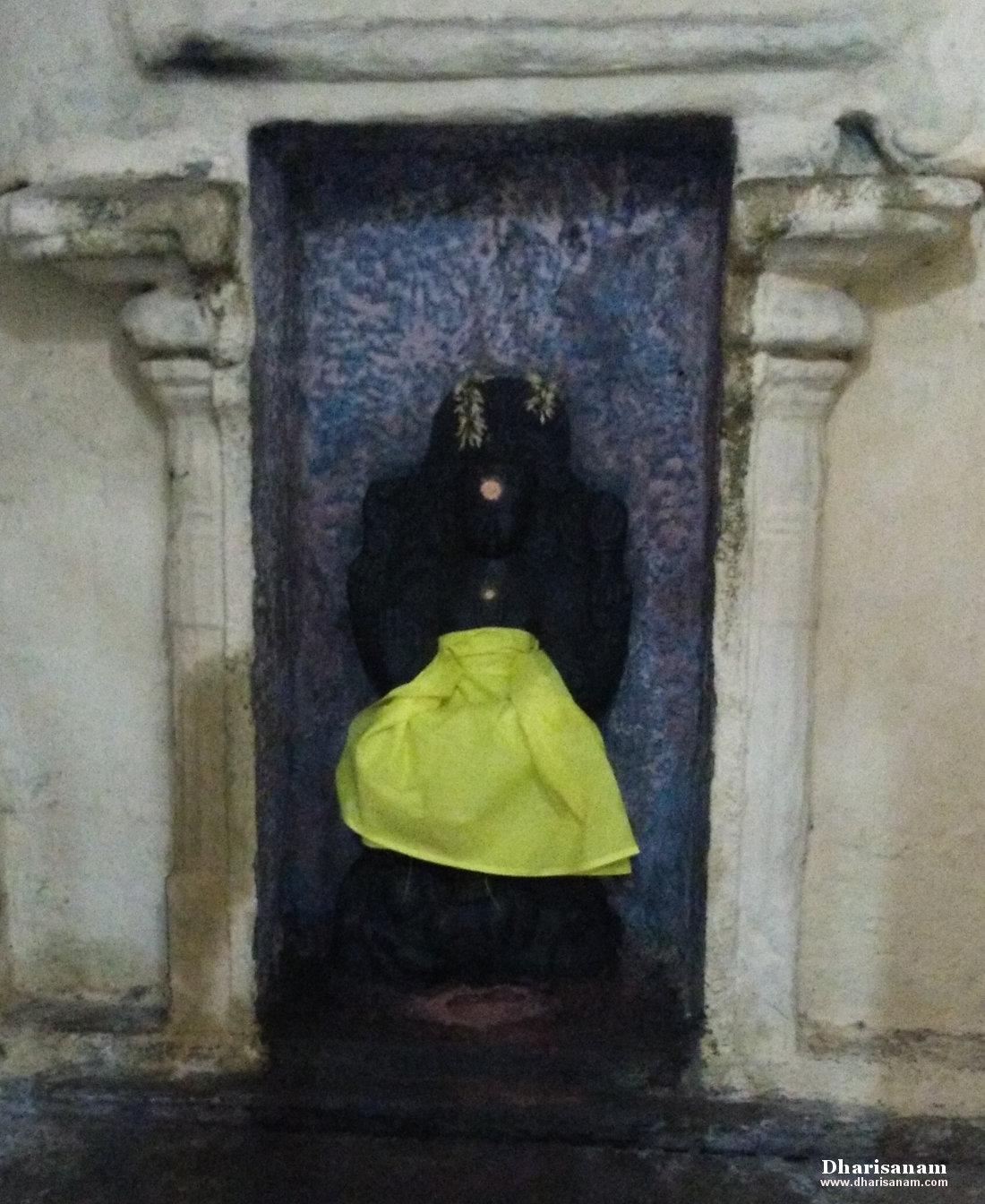 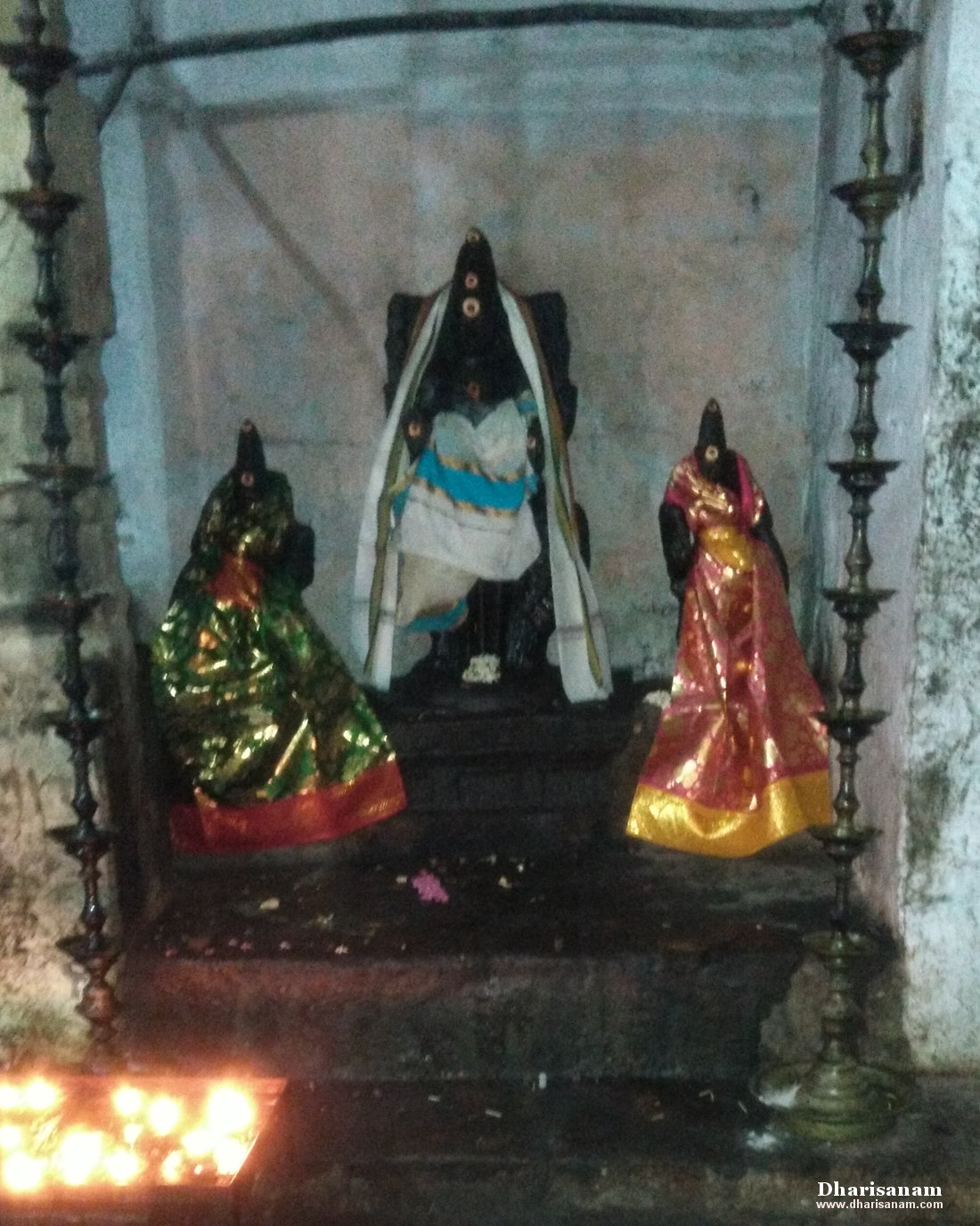 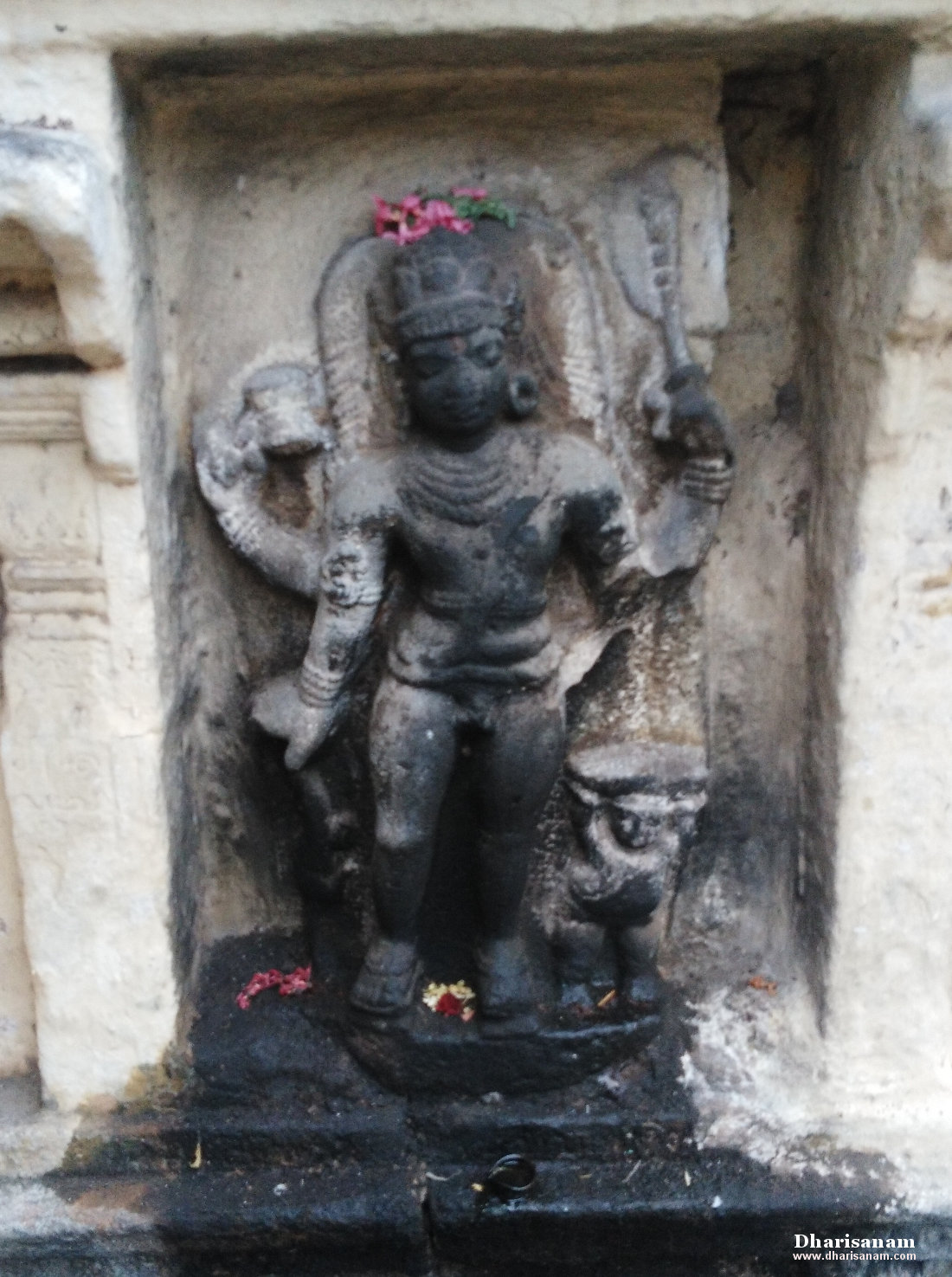 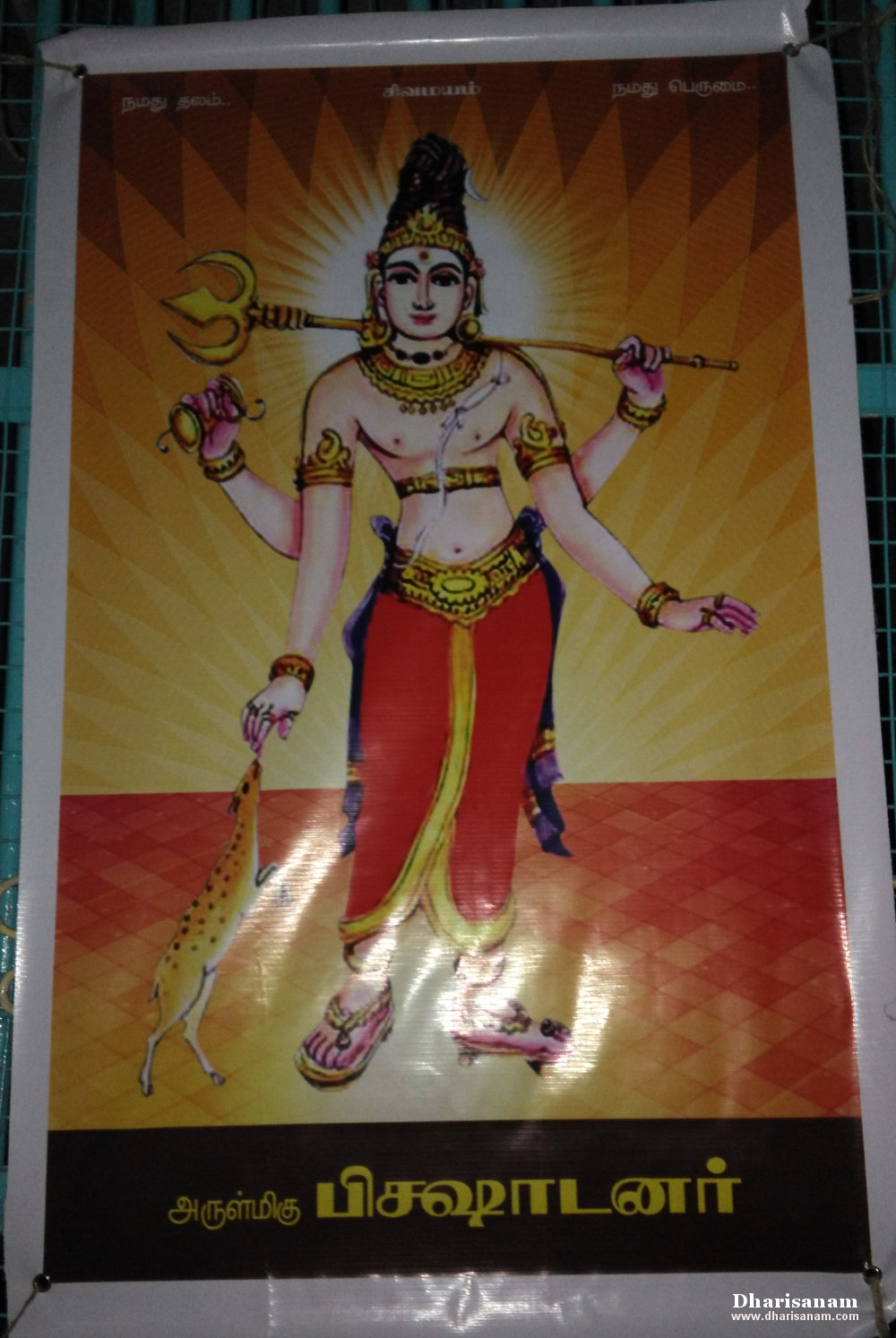 A big sized idol of Lord Brahma seated along with Goddess Saraswathi is in a separate shrine. This shrine is next to Lord Shiva’s sanctum. Lord Brahma is seen in a worshiping posture. He holds a “japamalai” and lotus flowers in his hands.

At the entrance of the sanctum sanctorum, idols of Lord Murugan can be seen on either side. This is quite unique. One Murugan is holding a “japamalai” in his right and the other one is holding a lotus flower. They are praised here as “Sri Gnanaskandar” and “Sri Veeraskandar”.

The idol of Ardhanareeswarar looks very beautiful and it is quite unique. Normally, in other temples, Lord Ardhanareeswarar is seen in a standing posture but here he is in a seated posture.

In the Navagram, all other planets are facing Suryan. The idol of Lord Suryan is seen with his two wives.

It is believed that Lord Suryan (Sun) worships Lord Shiva of this temple by directing his rays on the lingam every year from 13th to 15th (between 5:45 PM and 6:10 PM) in the Tamil month of Masi (Feb-Mar).

The front hall (Mandapam) of this temple, where Lord Dandapani is housed, is designed to look like the forehead of a bat (“Vovval Nethi Mandapam”). This looks very beautiful.

On the top of the second entrance, there are beautiful sculptures of Lord Shiva and Goddess Parvathy seated in Mount Kailash. Lord Brahma and Goddess Saraswathi can be seen worshiping them.

Sapthasthanam festival in the Tamil month of Chithirai (Apr-May) and Brahmotsavam in Vaikasi (May-June) are celebrated in a grand manner. 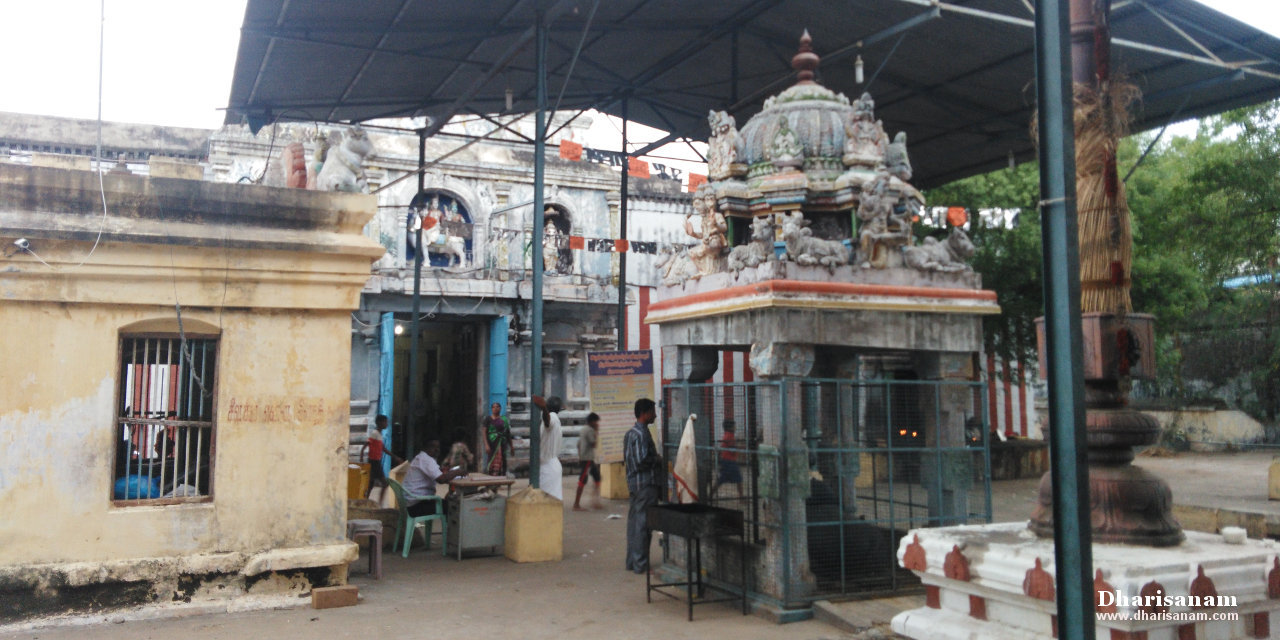 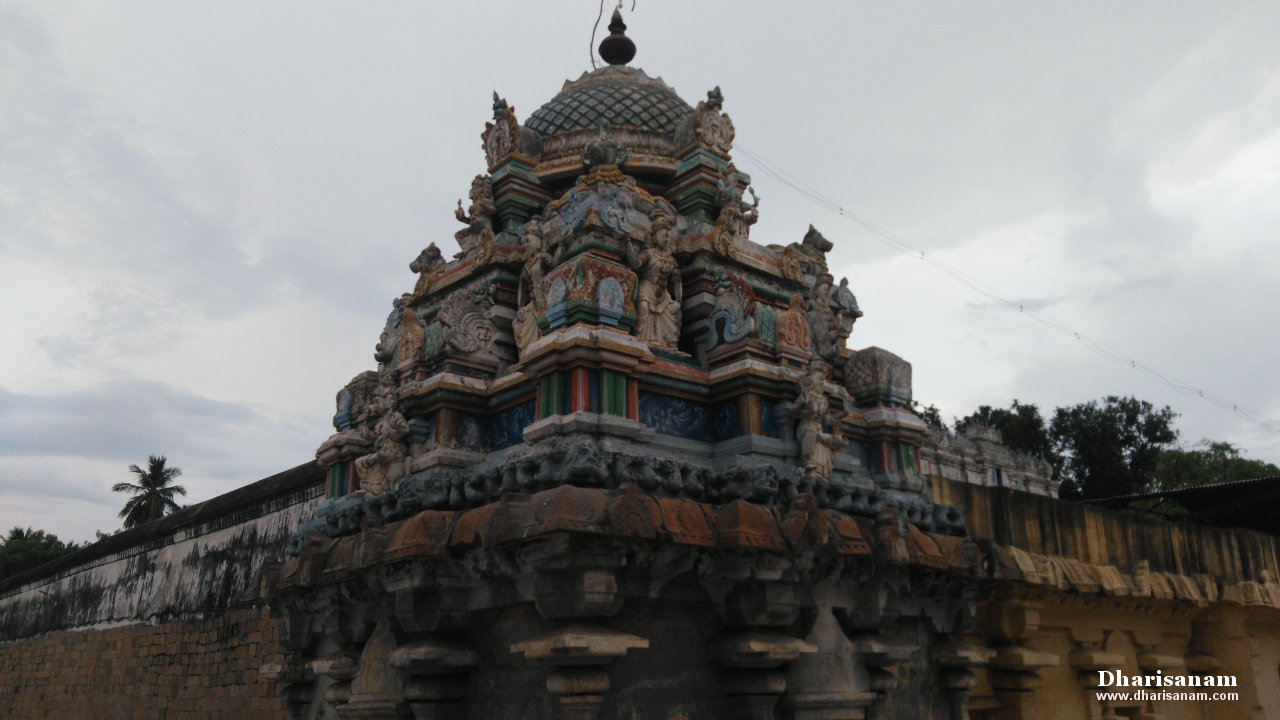 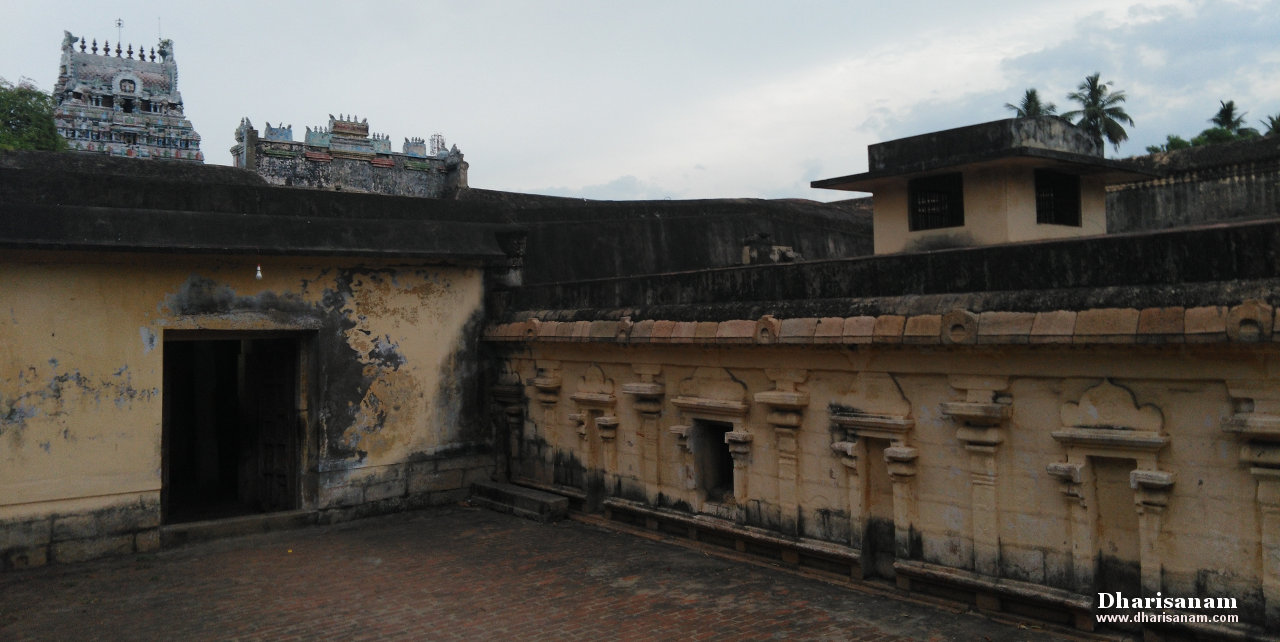 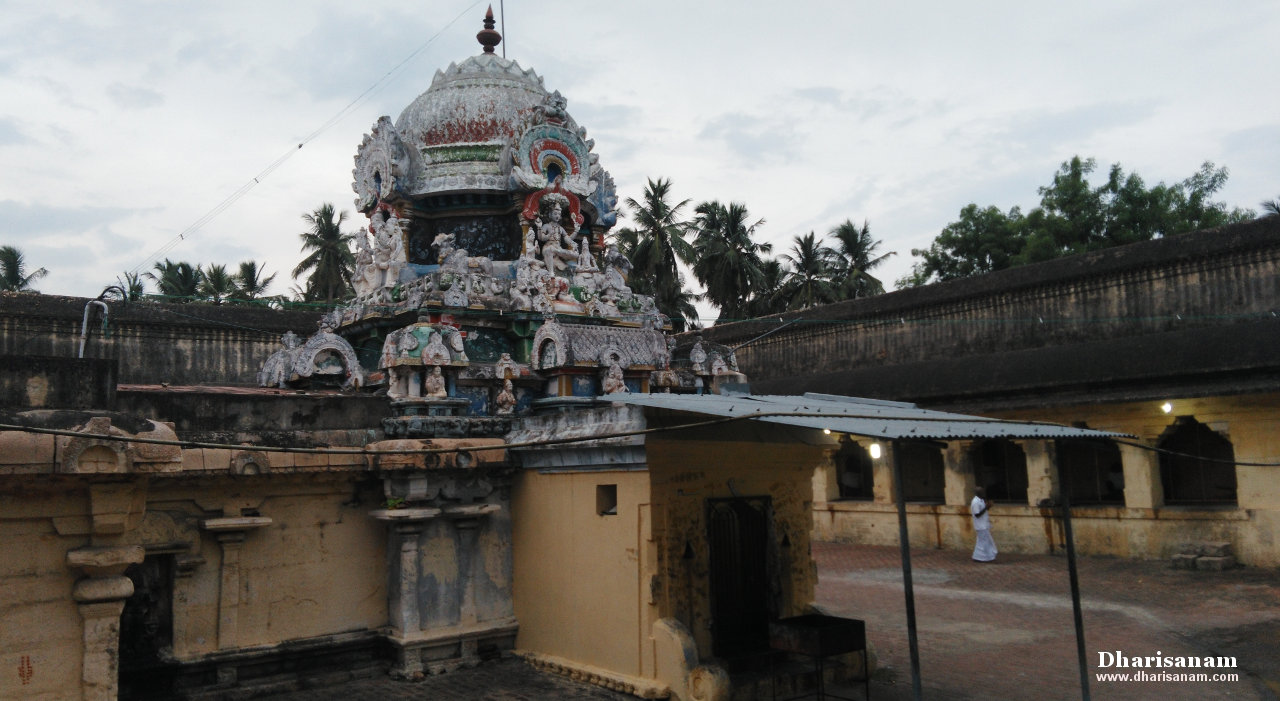 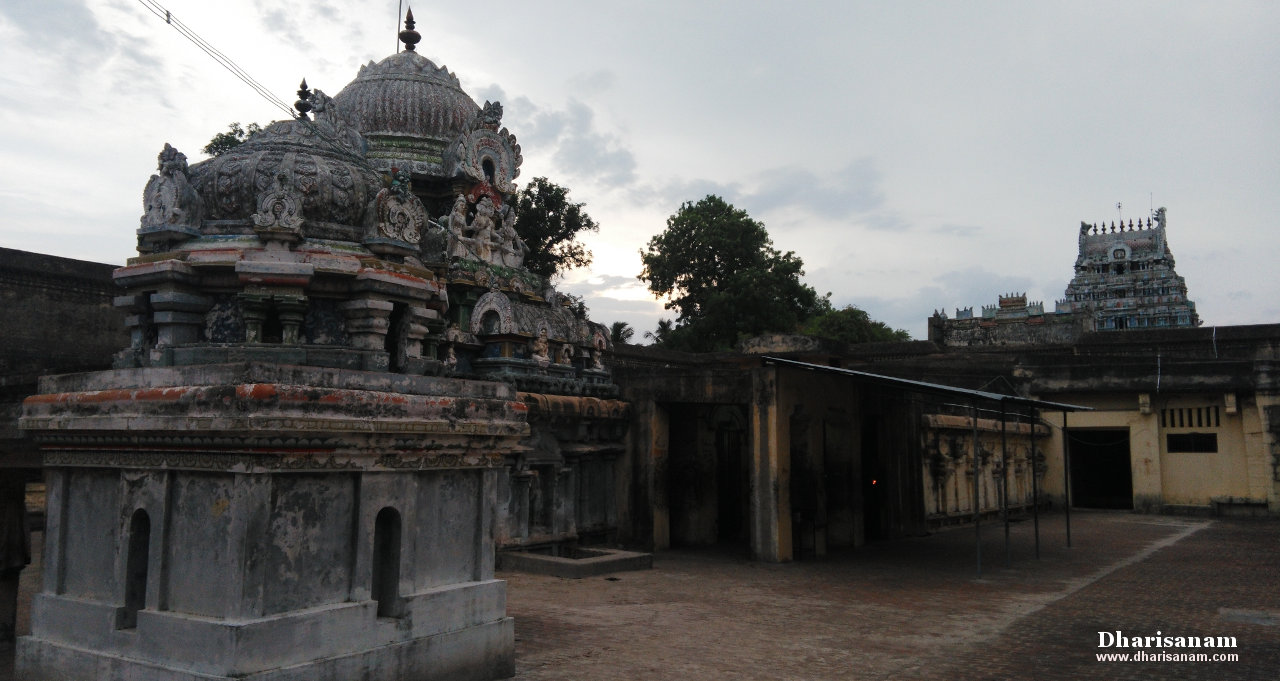