Thiruppananthal is situated at a distance of about 18 kms from Kumbakonam on the Kumbakonam to Anaikkarai road (Chennai highway). From Aduthurai, it is about 10 kms.

Since Lord Shiva is believed to have emerged from under the temple’s sthala viruksham, this place gets the name Thiru Pananthal. (“Panai” means palm tree in Tamil).

Thala Vanam is derived at from the words “Thala” meaning palm tree and “Vanam” meaning forest in Sanskrit.

This temple is under the administrative control of the Dharumapuram Aadheenam. 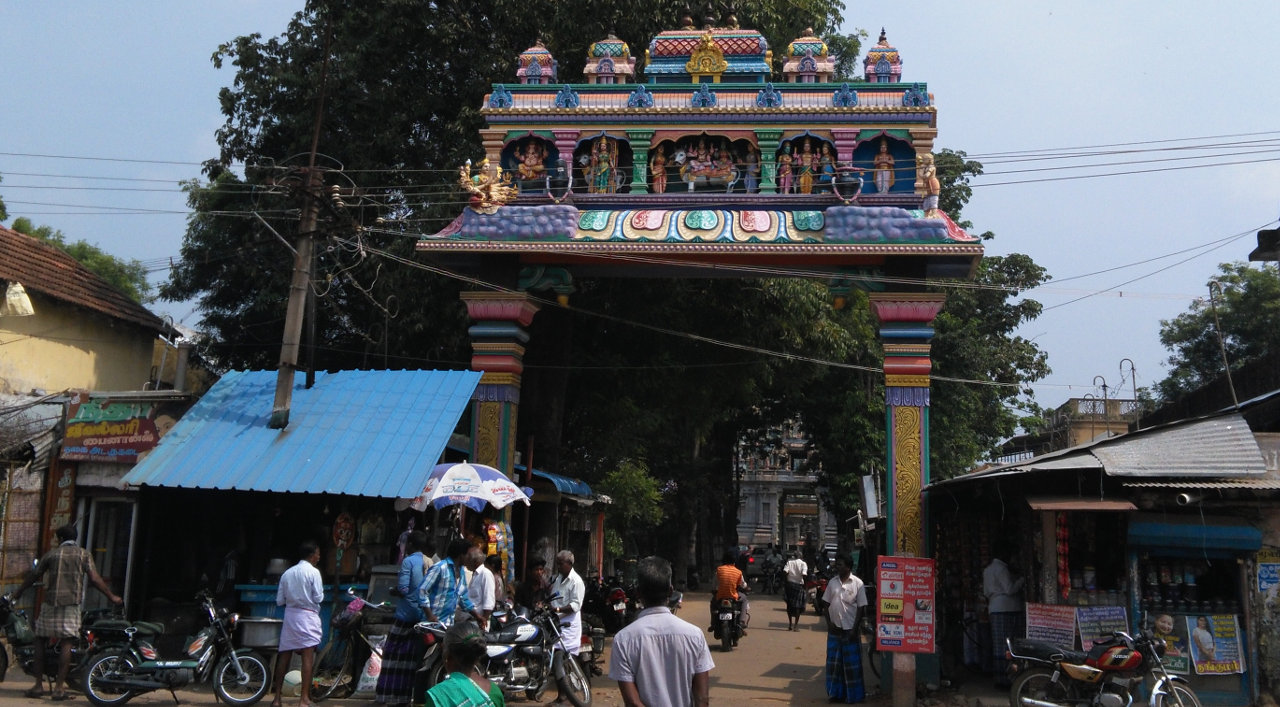 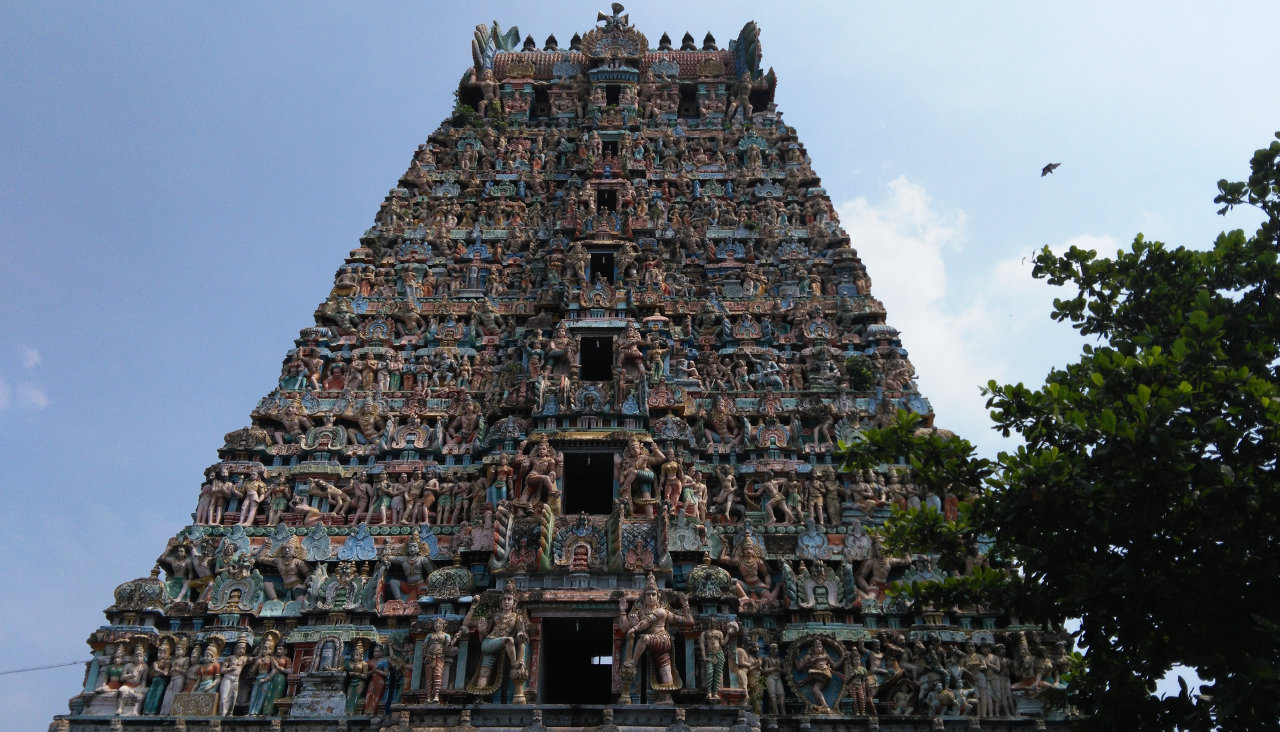 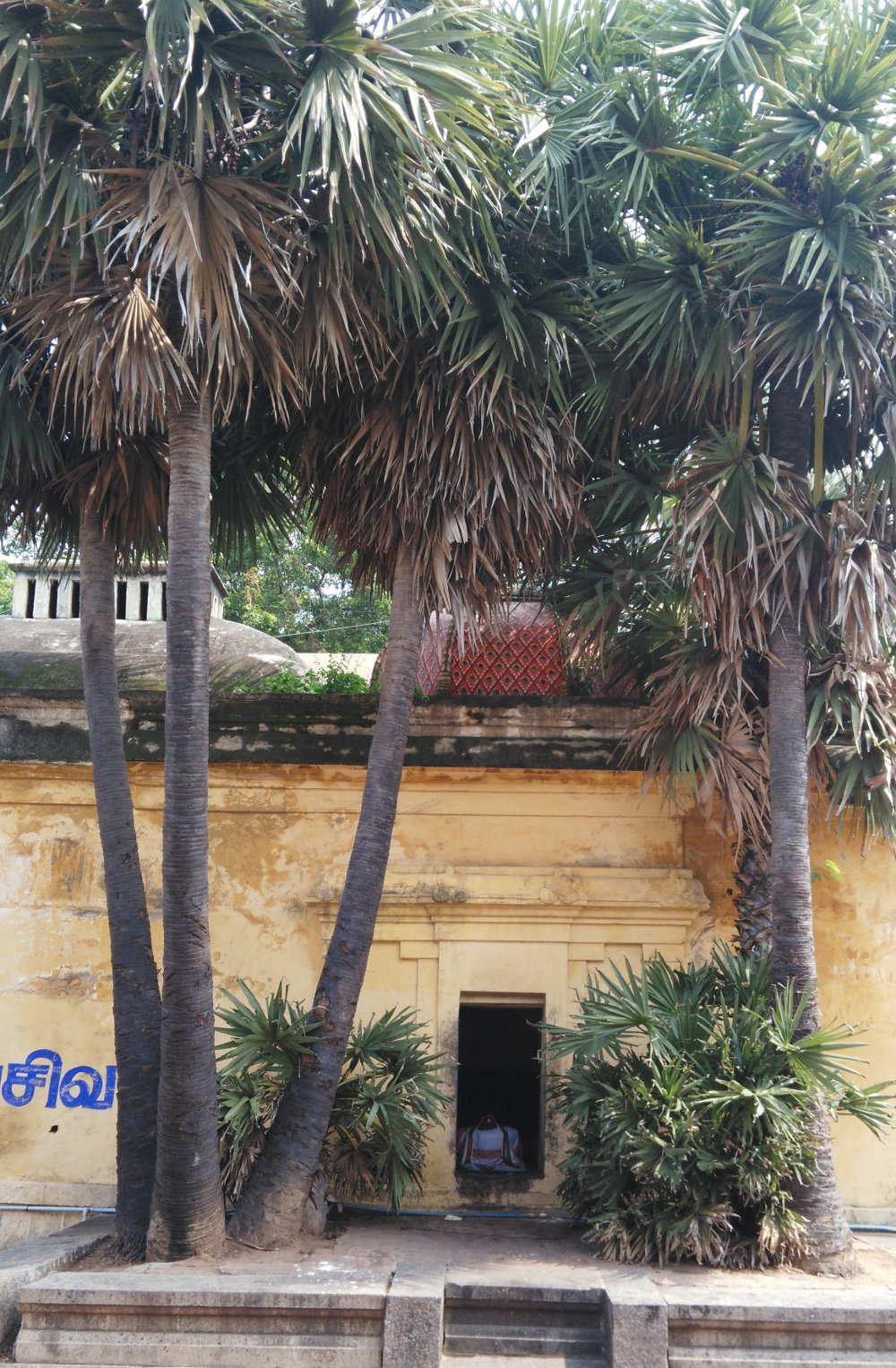 Nagakannikai (Vasuki’s daughter; also called Sumathi) and her husband Arithuvasan from the Naga world have worshiped the lord here.

According to legend, an ardent devotee called Thaadagai, who was the daughter of a demon, used to worship Lord Shiva here every day with garlands.  She used to do so in order to be blessed with a child. One day while taking a garland to offer to the lord, her saree slipped from her shoulders. She pressed the dress with her elbow to avoid it from slipping from her body and hence could not lift her hands to offer the garland to the lord. Lord Shiva, after seeing her predicament and in order to show to the world her devotion, leaned his head so that she could offer the garland without any difficulty.

Then she prayed to the lord that she be given 16 hands to perform the “Shodasa Upachara” pooja to him (“shodasa upachara” means 16 steps pooja in Sanskrit). It is believed that Lord Shiva fulfilled her wish and granted her 16 hands. A beautiful sculpture of Thaadagai with 16 hands performing her pooja can be seen in the inner corridor. As Thaadagai worshiped the lord here, this place gets the name “Thaadagai Echaram”. It should be noted that this is not the same Thaadagai from the Ramayana epic. 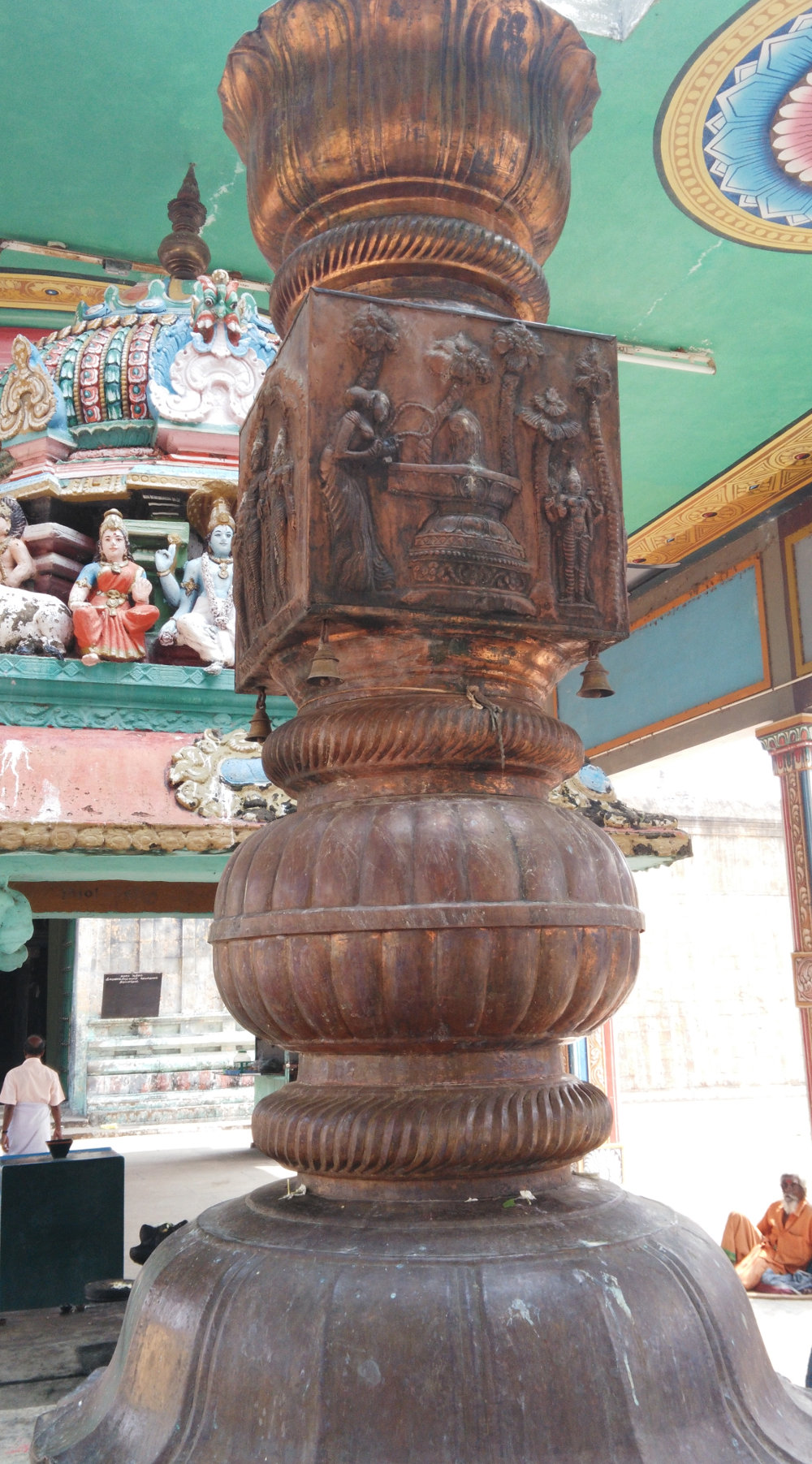 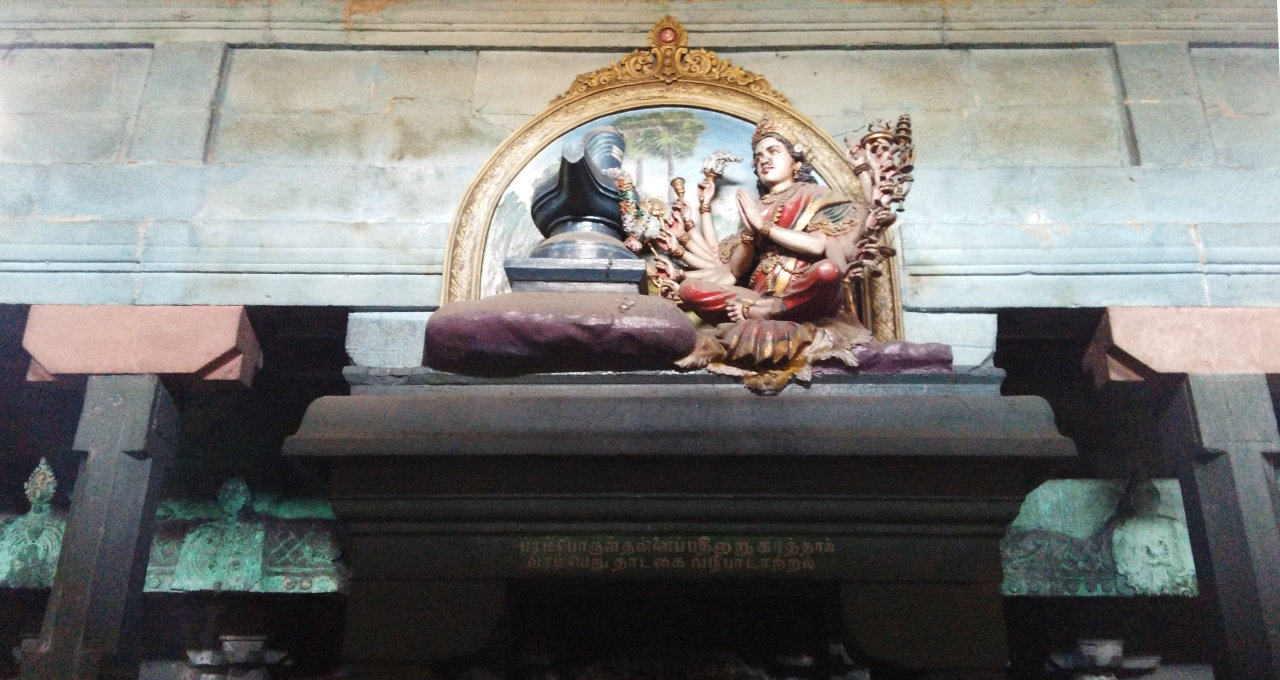 The king came to know about Saint Kungiliya Kalaya Nayanar of Thirukkadaiyur and his devotion towards Lord Shiva. He called him here and sought his help. This Nayanar was famous because his worship always involved the use of the fragrant smoke of Kunggiliam (Benzoin). He tied a rope to the lingam and to the other end of the rope he tied a knife. He wrapped the end with the knife to his neck and started pulling gently. He prayed to the lord that in case he failed to straighten the lingam in this process, the lord should take his life. Even as the rope tightened around his neck, the Nayanar did not flinch. Lord Shiva did not want to test Nayanar any further and returned the lingam back to its straightened position. The Devas showered flowers from heaven on the Nayanar. Everyone was amazed by his efforts and recognised his glory. 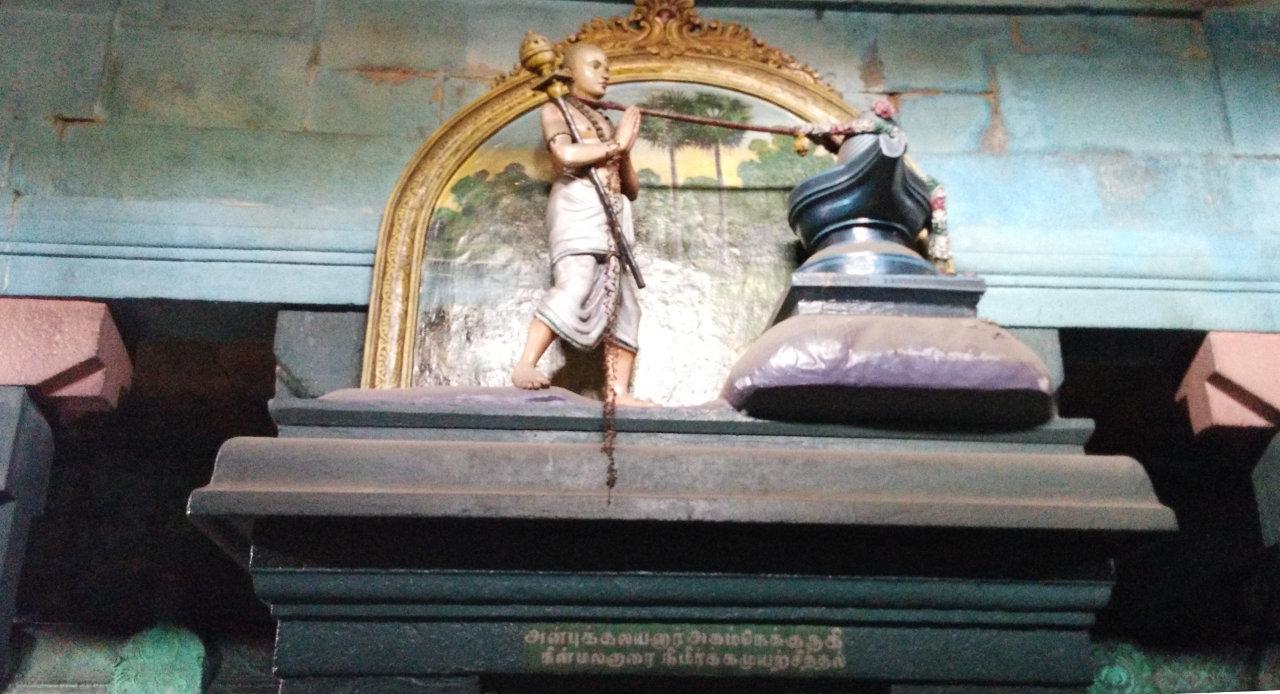 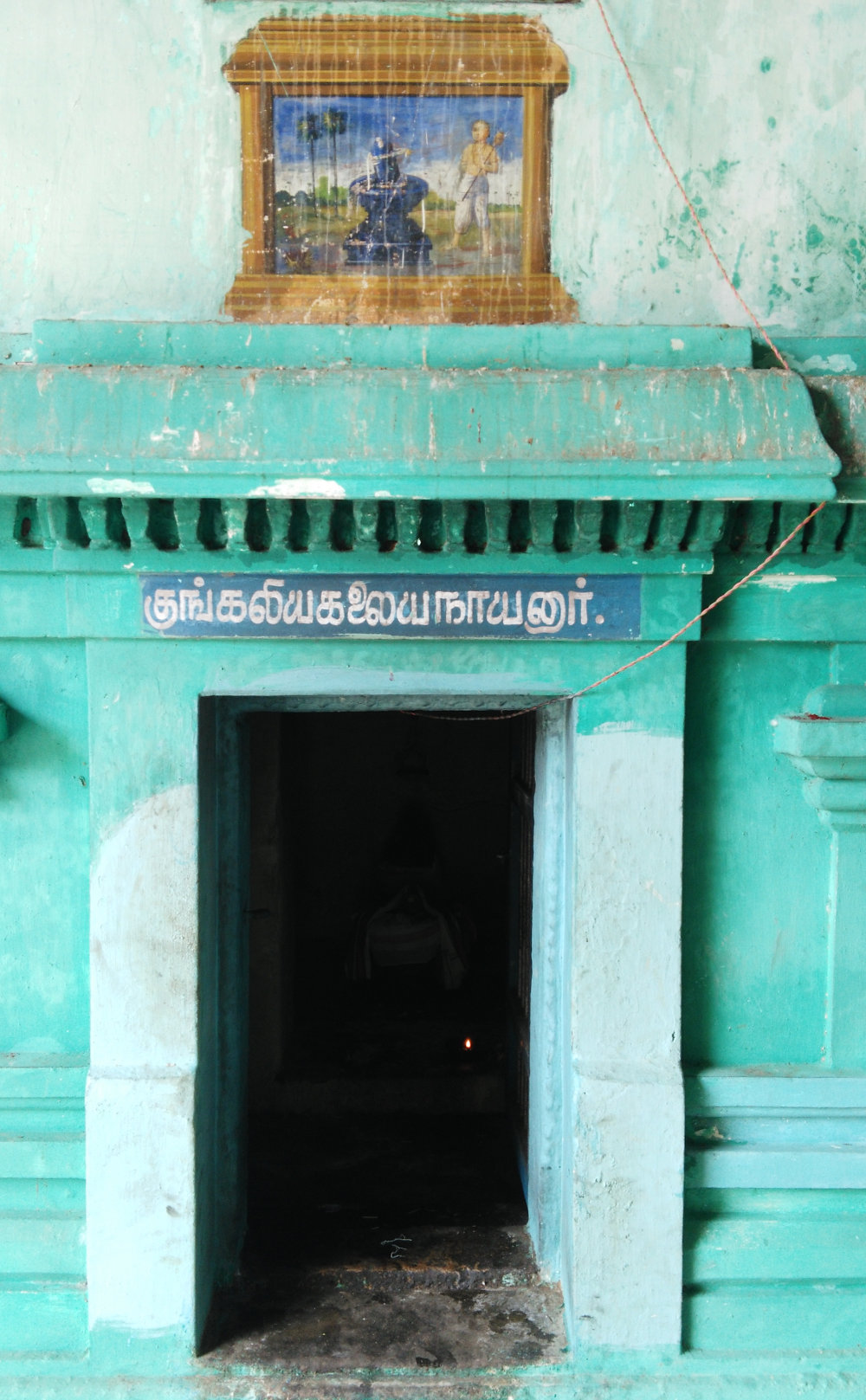 Another legend is that Kungiliya Kalaya Nayanar’s son expired in this place. It is believed that when he was taken for cremation, Lord Vinayakar intercepted and advised them to bathe his son in the waters of the Nagakannikai Theertham. When they did so, the Nayanar’s son was restored back to life.

In the “koshtam” (place surrounding the sanctum sanctorum), idols of Vinayakar, Dakshinamurthy, Lingothbavar, Brahma, Durgai and Chandikeswarar can be seen.

There are two procession idols of Lord Murugan with his consorts – one where he is seen with his mount peacock and the other without it. The second one is known as Sri Muthukumaraswamy.

There are separate shrines for Sri Aanda Vinayakar and Saint Kungiliya Kalaya Nayanar in the outer corridor. 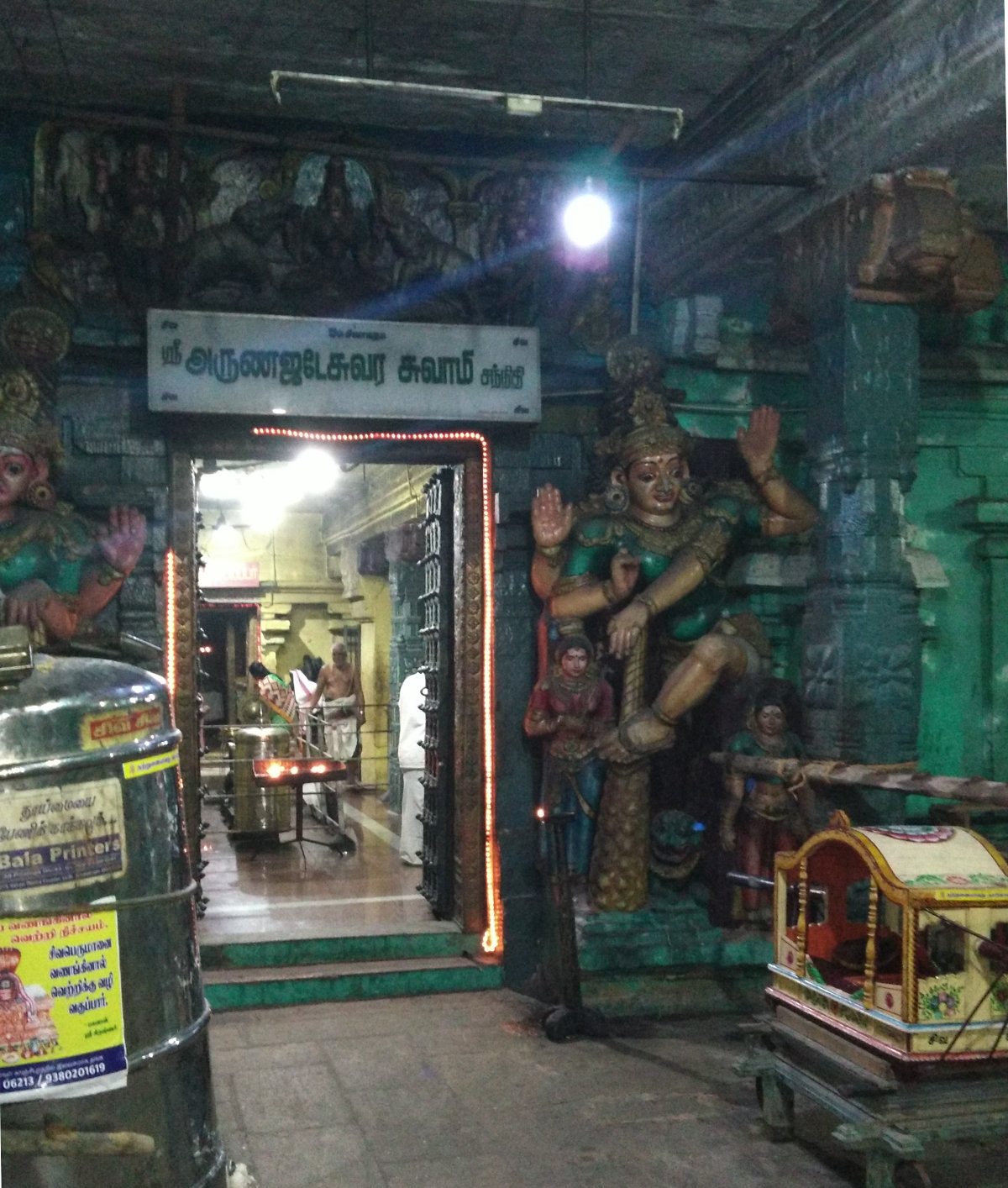 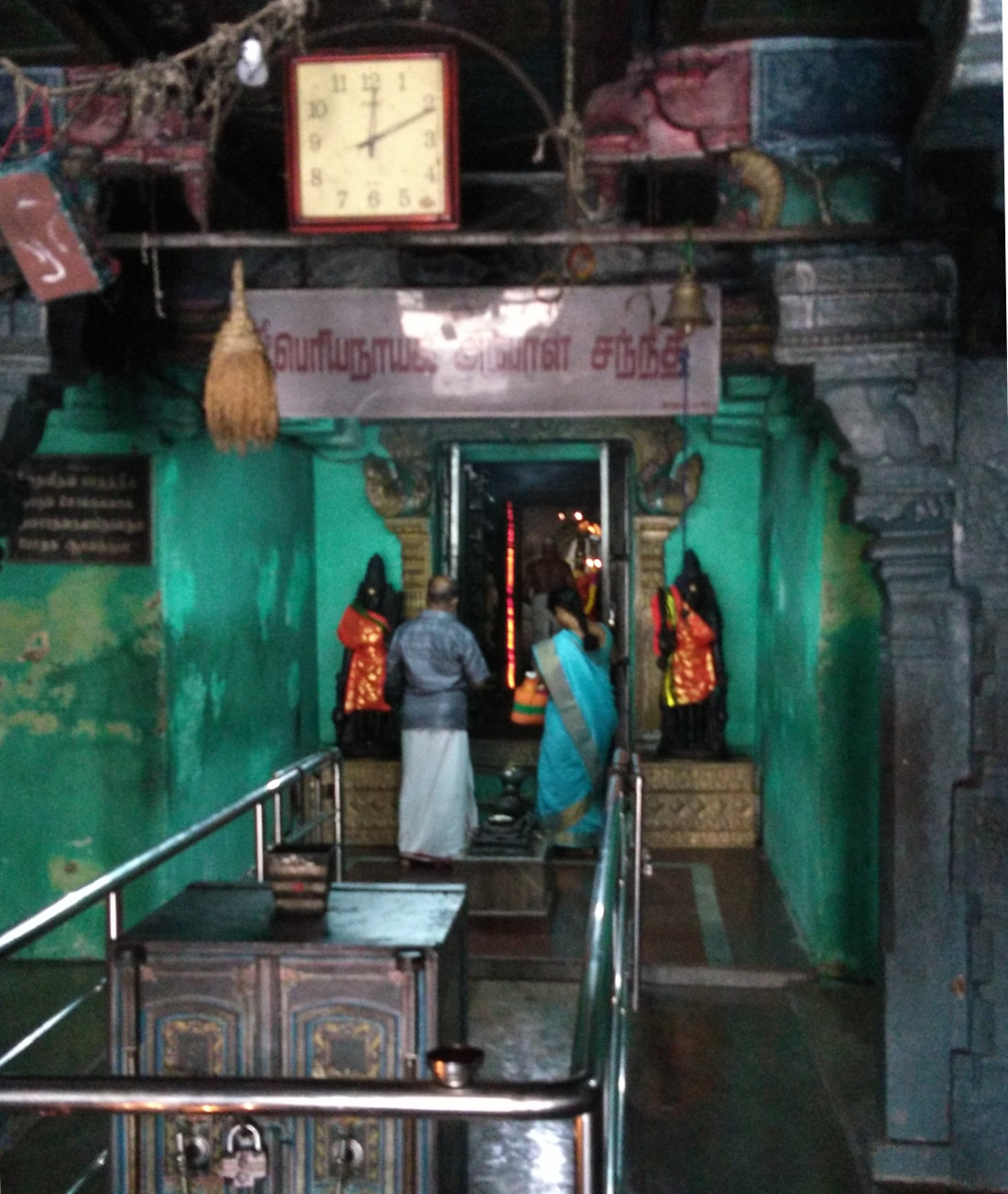 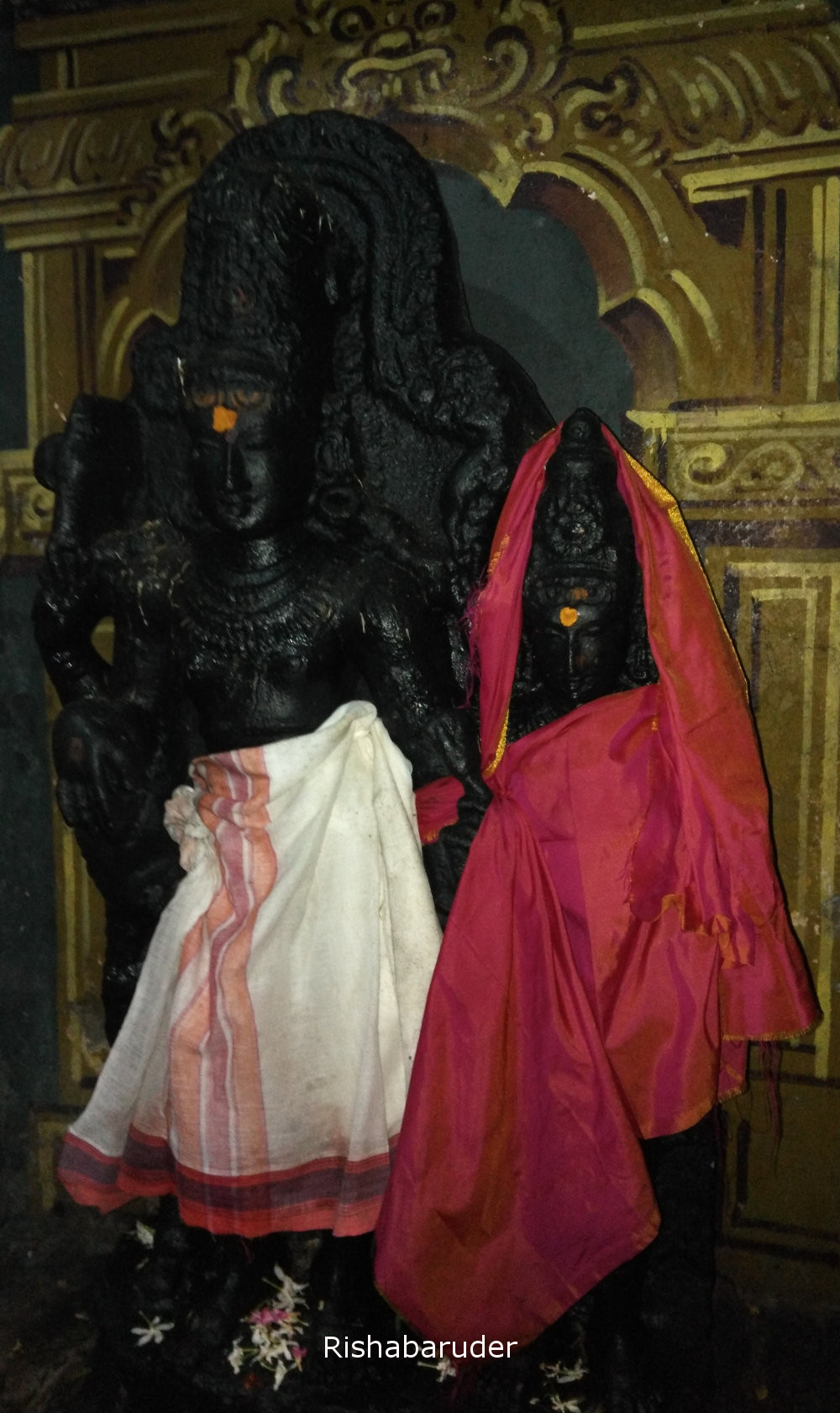 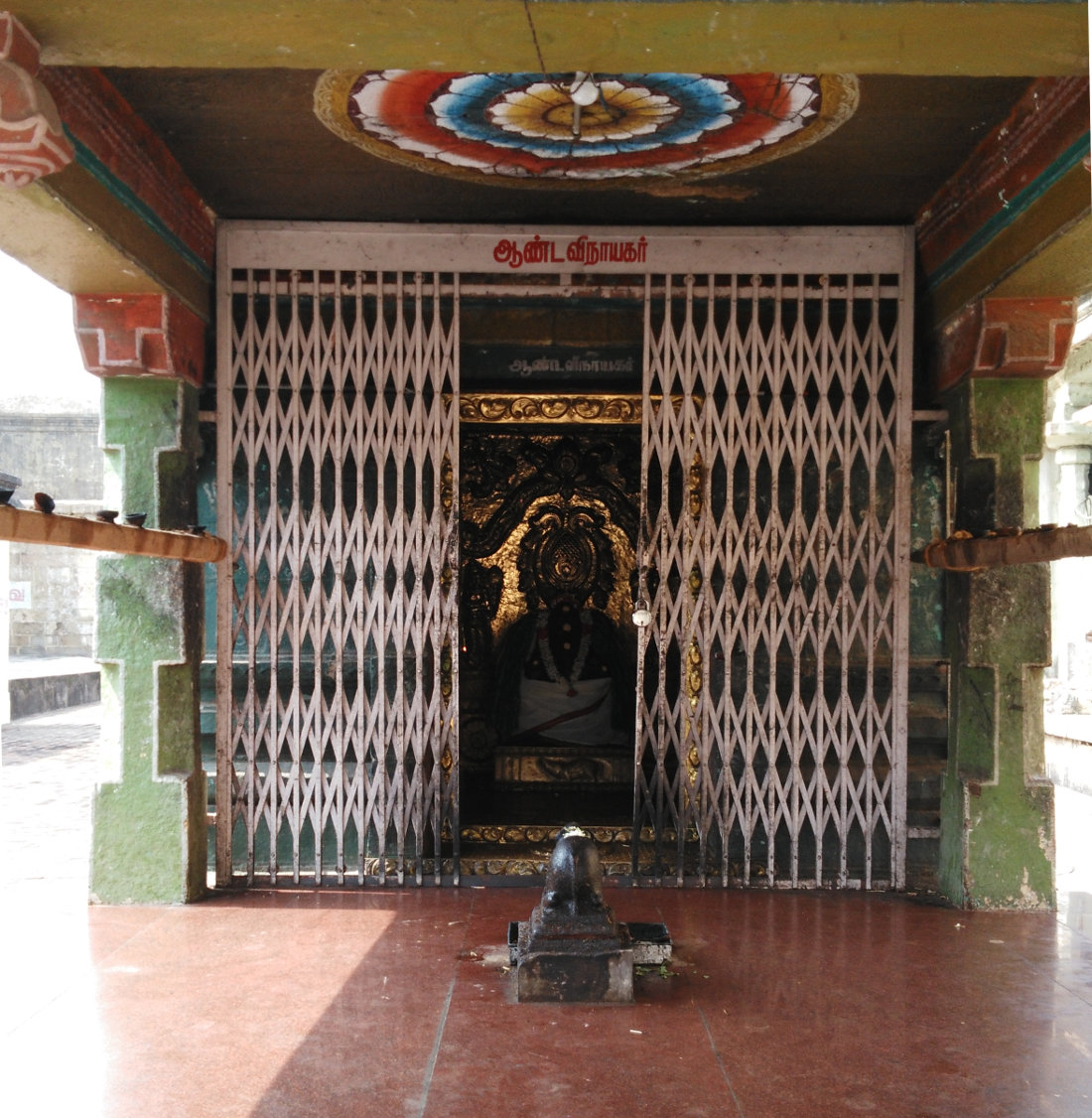 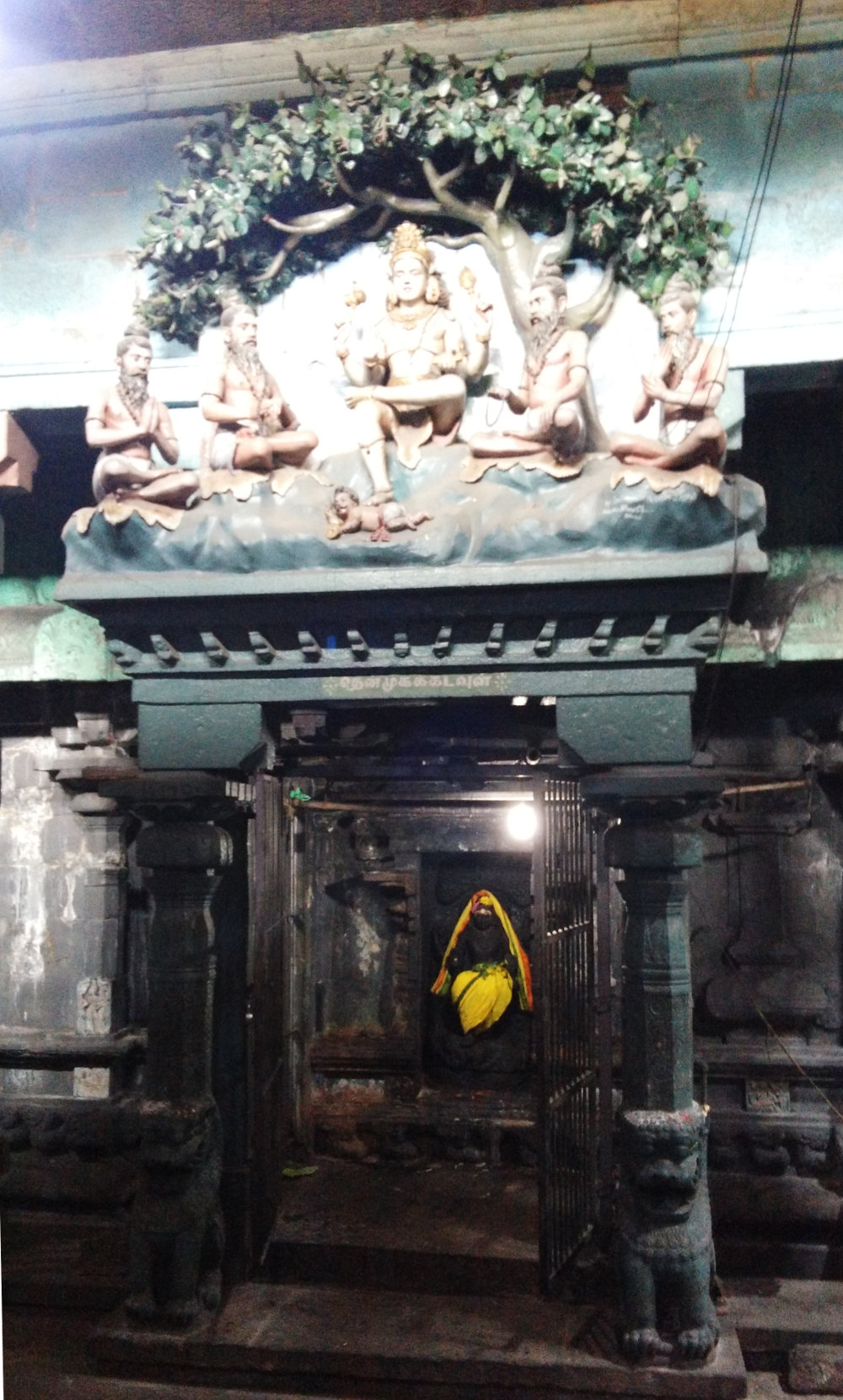 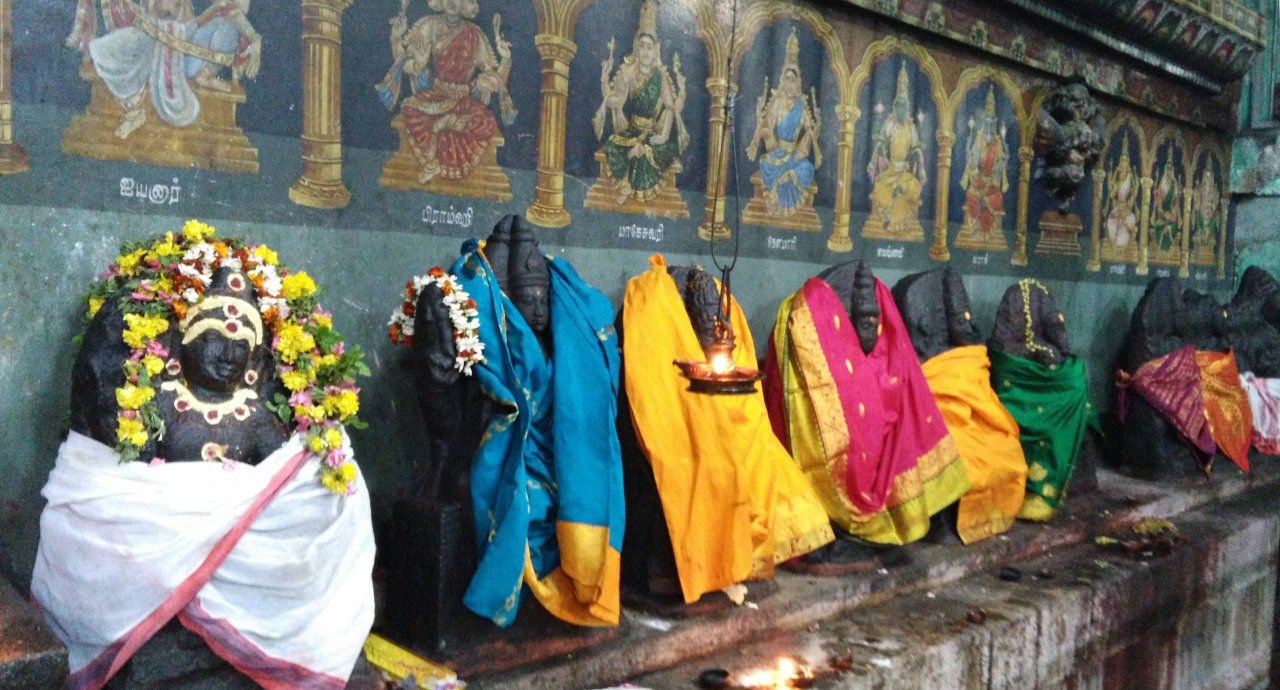 As Goddess Parvathy received “Gnana Upadesa” from Lord Shiva here, their shrines are located facing each other. This sthalam is considered to be an “Upadesa Sthalam”.

There are marks on the Shivalingam which indicates that it was first bent in order to receive Thaadagai’s garland and then straightened by Kungiliya Kalaya Nayanar using a rope.

Beautiful sculptures depicting Nayanar pulling the lingam and Thaadagai worshiping the lord with her 16 hands can be seen in the inner corridor.

The temple’s sthala viruksham palm trees can be seen in the outer corridor. Under the tree there is small shrine for a Shivalingam which symbolises the legend of Thaadagai’s worship.

There is a well near the sthala viruksham and it is believed that the Nagakannigai came from this well to worship the lord. 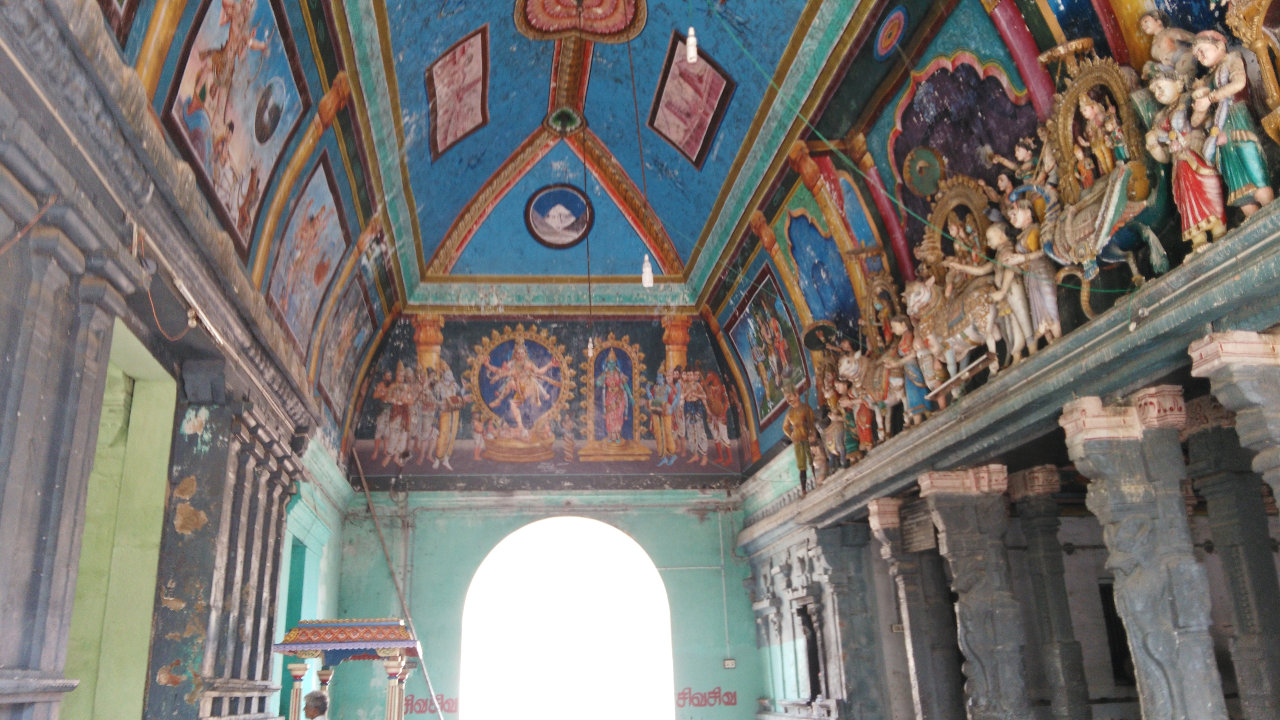 In all the stanzas of his hymn, Saint Thirugnanasambanthar mentioned this place as “Thiru Thaadagai Echarm”.

It is believed that Lord Suryan (Sun) worships Lord Shiva of this temple by directing his rays on the lingam every year for few days in the Tamil month of Chithirai (April-May).

This is a “parikara sthalam” for Naga dosham and Sevvai dosham (Mars).

Brahmotsavam in the Tamil month of Chithirai (Apr-May) is celebrated in a grand manner here.

Aadi Pooram in the Tamil month of Aadi (Jul-Aug),

Theerthavari at the Brahma Theertham on the new moon day of the Tamil month of Aavani (Aug-Sept).

Navarathri in the Tamil month of Purattasi (Sept-Oct) and

Skanda Shashti and Annabishekam in the Tamil month of Aippasi (Oct – Nov). 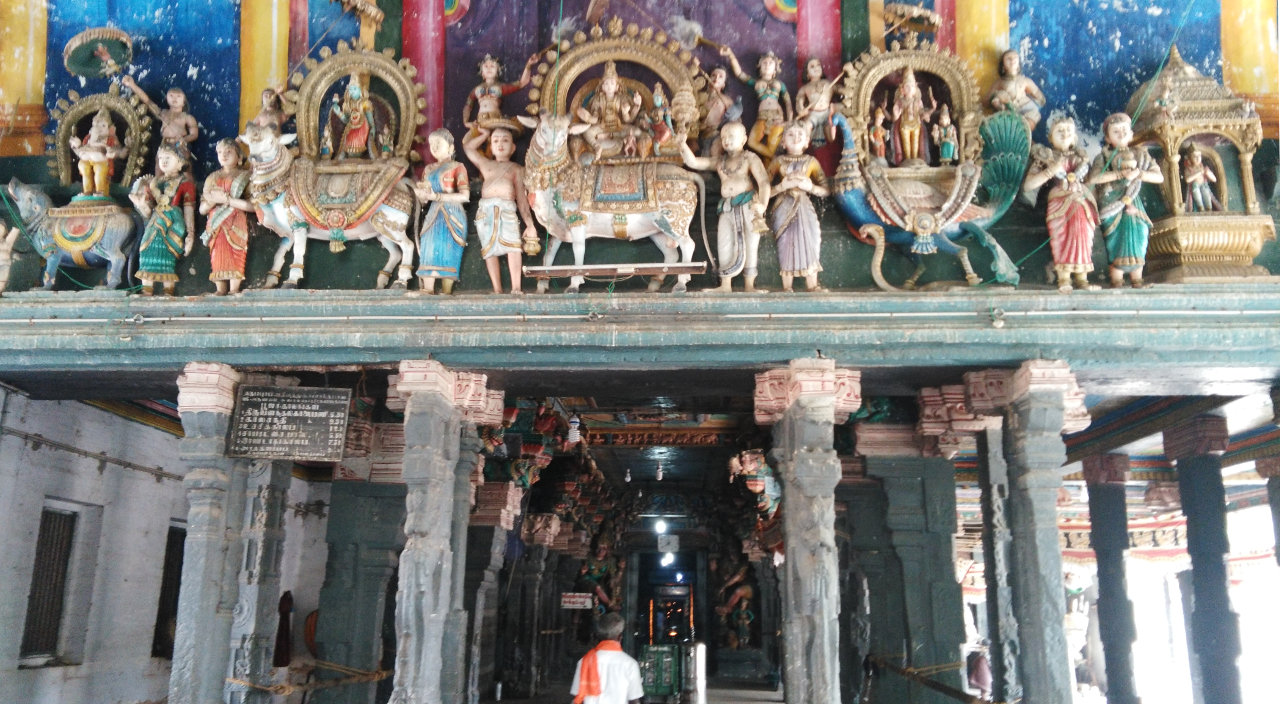 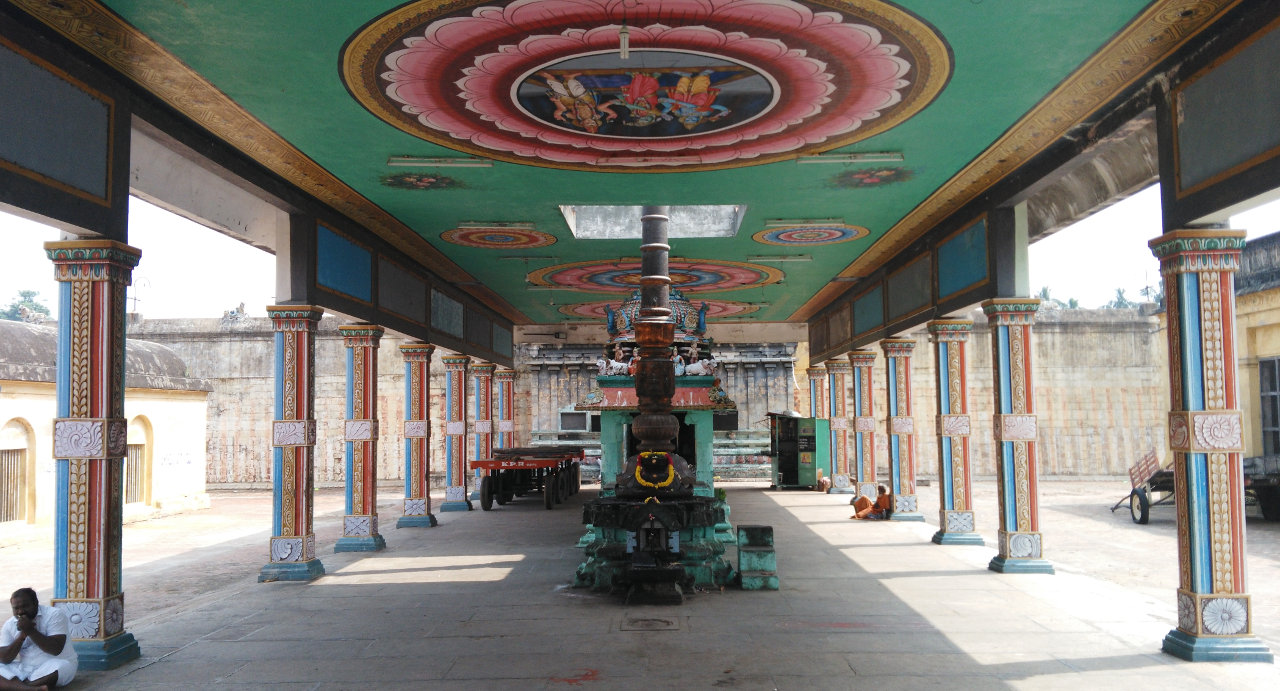 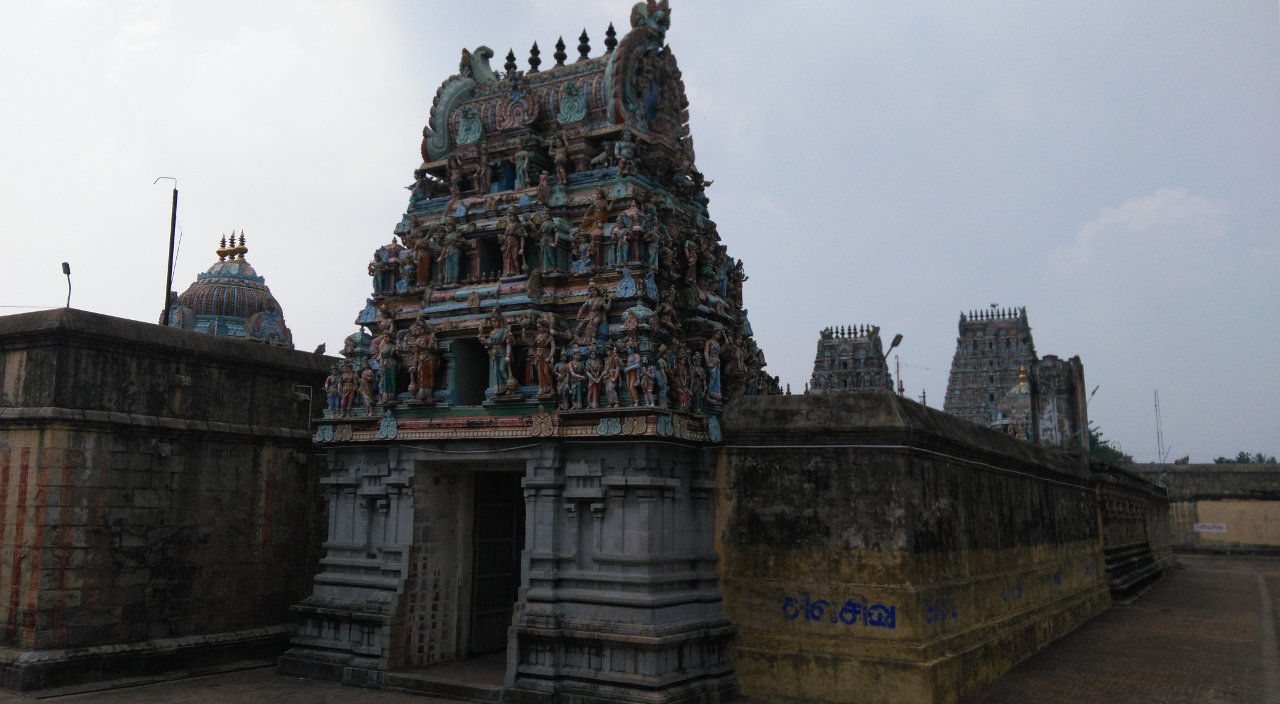