In Hindu mythology, there are eight special places where it is believed that Lord Shiva vanquished various demons and exhibited acts of bravery. These places are Veeratta Sthalams. In Tamil, this is referred to as “Atta Veerattanam” (“Atta” means eight and “Veeram” means bravery). Thirukkadaiyur is the eighth Veeratta Sthalam where Lord Yama was believed to have been kicked and punished to save Markandeya. The other seven Veeratta Sthalams are –

There are 54 stone inscriptions available in this temple which date back to the periods of Chola and Pandiya Kingdoms and the Vijayanagar emperors Krishnadevarayar and Viruppanna Udayar,

The historical names of this place are Vilva Vanam, Pinchila Vanam and Kadavur.

This temple is under the administrative control of Dharumapuram Aadheenam. 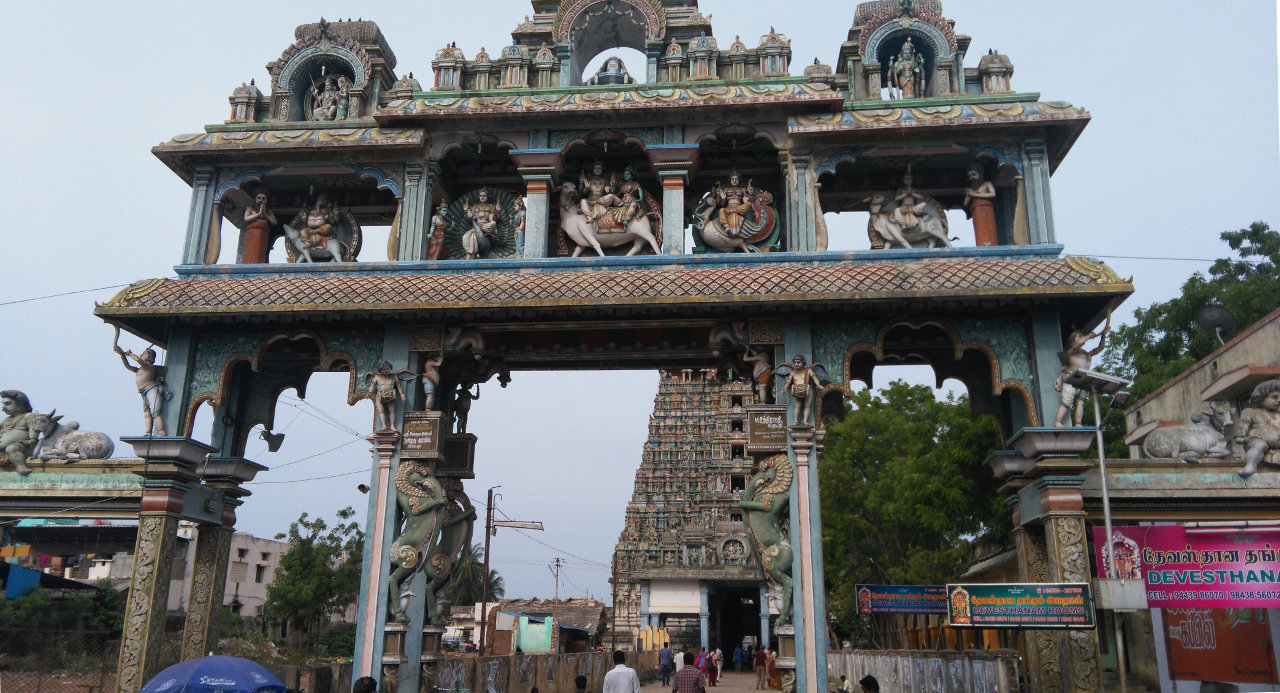 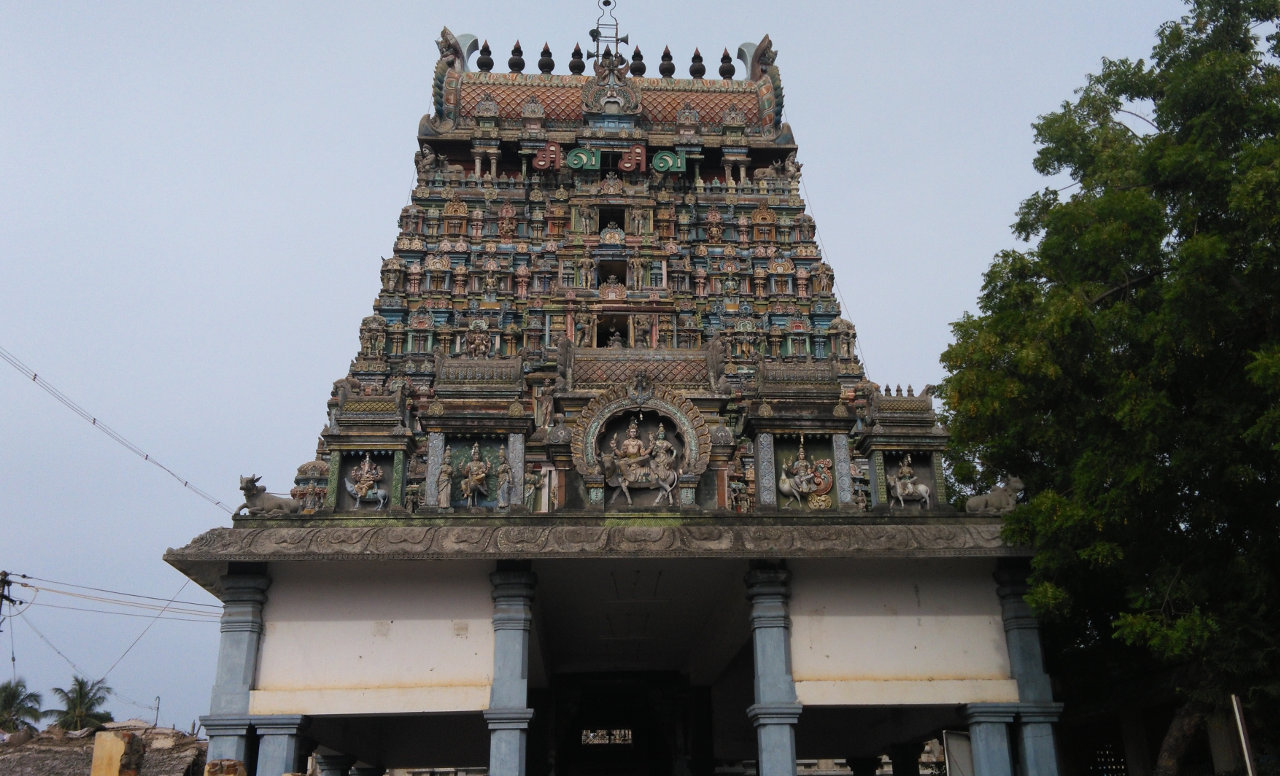 It is believed that lord Brahma, Yama, Goddess Durgai, serpent Vasuki and sages Agasthiyar, Pulasthiyar and Markandeyar have worshiped the lord of this temple.

The legend is that once upon a time, when the Devas and Asuras were churning the “Thiruparkadal” ocean to extract nectar, it is believed that Lord Shiva made the pot of nectar appear in this temple’s holy water. However, the Devas forgot to worship Lord Vinayakar before taking the pot. It is believed that Lord Vinayakar got angry and hid the pot contained the nectar.

However, later the pot got so deeply entrenched in the earth that it reaches the “padala logam” (under world) and was transformed into a lingam. This is the lingam that is present inside this temple. This Shivalingam is hailed as a manifestation of the celestial nectar itself. Hence the lord is praised as “Sri Amirthakateswarar” (“Amirtham” means nectar and “kalasam” means pot in Tamil).

Another legend is that once Lord Brahma went to Mount Kailash to receive the “Gnana Upadesa” (divine learning). Lord Shiva gave the seeds of Vilwa tree to Lord Brahma and asked him to sow them in earth in various places. Lord Shiva further told him that wherever the seed germinates within one and a half hours, that shall become the venue of the “Gnana Upadesa”. It is believed that this happened in Thirukkadayur. The Shivalingam worshiped by Brahma here is known as “Sri Adhi Vilwa Vana Nather”.

Another legend associated with this temple is that of Sage Markandeya. Sage Mrigandu and his wife Maruthuvathi were praying to Lord Shiva for being blessed with a child. The sage performed severe penance. Lord said that they would be blessed with a son who would be wise and noble but his life would be too short -spanning just 16 years. The sage couple named their son Markandeya. When he attained the age of 16, his parents became very sad. Knowing the reason for their sorrow, Markandeya took a pilgrimage to all Shiva Sthalams. Finally, he came to Thirukadayur. This was the 108th temple of his pilgrimage. That also happened to his day of destiny. While he was praying to Lord Shiva, Yama appeared before him and to take his life as was preordained.

On seeing Yama, Markandeya embraced the Shivalingam and sought lord Amirthakadeswarar’s help. When Yama threw his rope on Markandeya, it covered the lord also. When Lord Shiva realised that Yama had come to take the life of such a devout young child, he became very angry. It is believed that the lingam then split open and Lord Shiva appeared from it in the form of Kalasamharamurthy. In his fury, he destroyed Yama with his trident. Lord Shiva blessed Markandeya with the gift of immortality. Further he was blessed that he would forever remain a boy of 16 years. 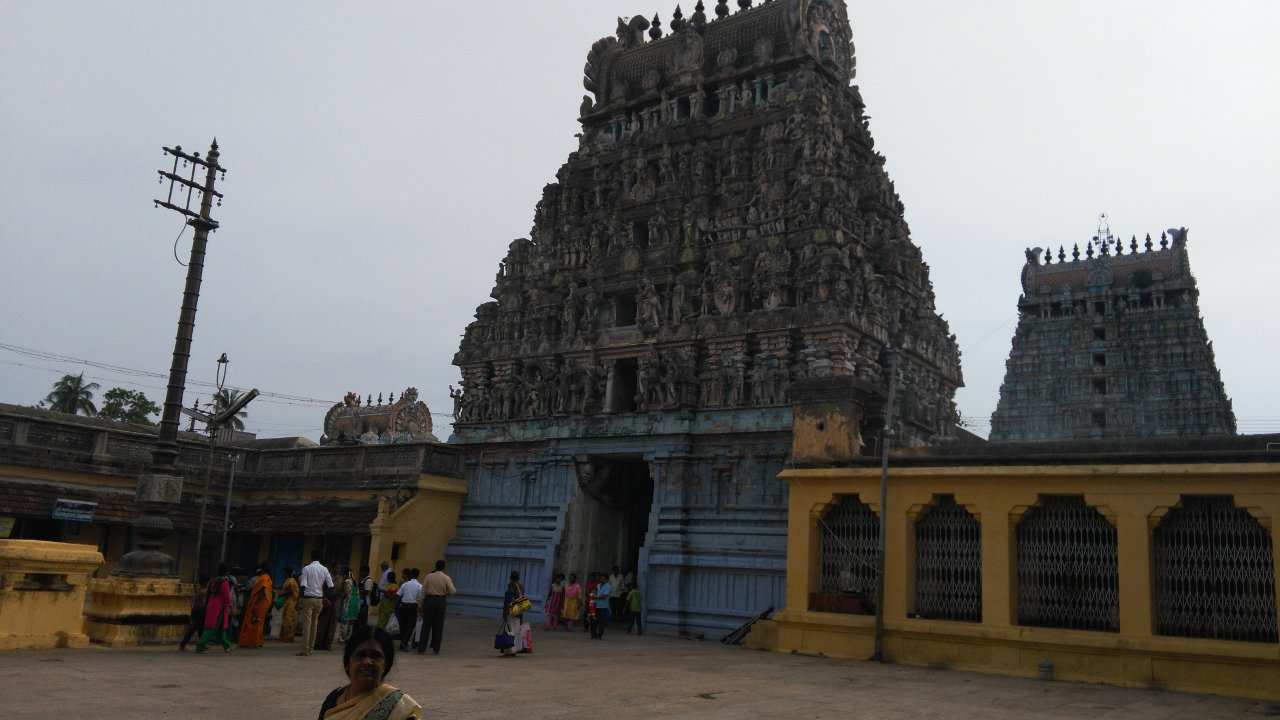 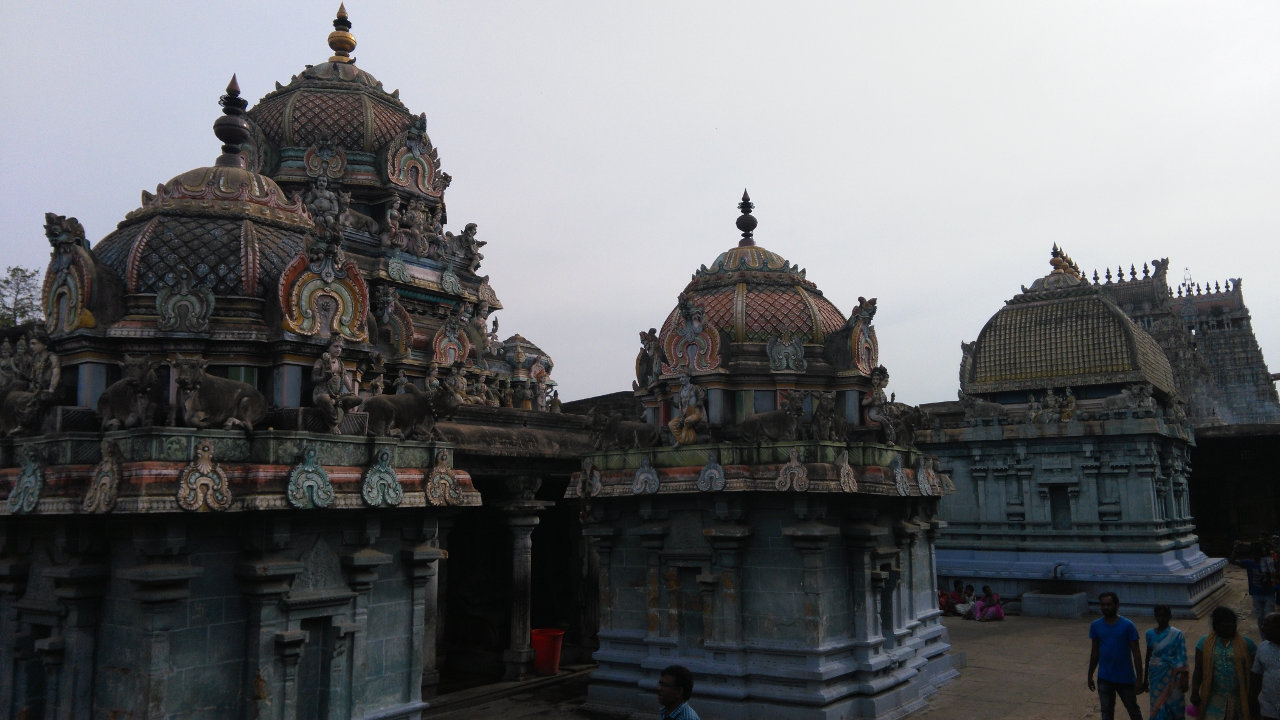 This is the birth place of Abhirami Bhattar, originally known as Subramanian. He is the author of Abhirami Andhadhi. He was a priest in this temple and was a staunch devotee of Goddess Abhirami and sang beautiful songs in her praise.

One day when he was in deep prayer in the temple and had completely surrendered himself to Goddess Parvathy, the Tanjure King Saraboji-II visited the temple.  The king enquired him about the “Thithi” (literally meaning lunar day). He was so engrossed in his prayer that without thinking, he replied that it was a full moon day although it was a new moon day. When someone pointed out his mistake, the king became very angry. He asked Subramanian to prove that it was a full moon day, failing which he would be hanged.

When the evening approached and there was no sign of a full moon, the king ordered that he should be tied to a swing with a bowl of fire under him. Unfazed by this order, Subramanian left his fate to the goddess and started singing her glory in 100 verses in the Andhadhi poetic style. “Andh-Aadhi” – meaning first and last – is a style of poetry where the last word of the preceding verse becomes the first word of the next verse. When Subramaniam was singing the 79th verse, Goddess Abhirami threw her “Thadanga” (ear ring) in the air which turned into a full moon. Once he completed his 100th stanza, every one including the king fell at his feet as they recognised the extent of Subramanian’s devotion. Since then he came to be known as “Abhirami Bhattar”. These hundred stanzas are known as “Abhirami Andhadhi”.

This event is celebrated in the temple on the New Moon day of the Tamil month of Thai (January-February). These hundred stanzas are now chanted by devotees on a daily basis. On the day of this festival, this chanting is accompanied with an “Arthi” for each stanza. When the 79th stanza is chanted, a powerful electric lamp is switched on to represent the full moon appearing from the goddess’s “Thadangas (ear rings). This festival draws a large number of devotees.

This is the birth place of Shiva devotees Kaari Nayanar and Kungiliakalaya Nayanar. Both of them find their place among the 63 celebrated Saivite Nayanmars.  It is believed that they rendered their religious services in this place before attaining salvation here.

Other than the shrines of Lord Shiva and Goddess Parvathy, shrines and Idols of lords Vinayakar, Murugan with his consorts, Somaskandar, Natarajar with Sivakami, Mahalakshmi, Vilva Vaneswarar, Dakshinamurthy, Pitchandavar, Pancha Bootha Lingams, Markandeyar, Suryan, Agasthiar, 63 Nayanmars, Saptha Kannigas, Mahalakshmi, Durgai, Chandikeswarar and Bairavar can be seen in the corridors. There is no Navagraham in this temple.

There is an idol of Goddess Parvathi where she can be seen holding infant Murugan on her lap. This is quite unique. This idol can be seen next to Lord Natarajar’s shrine. 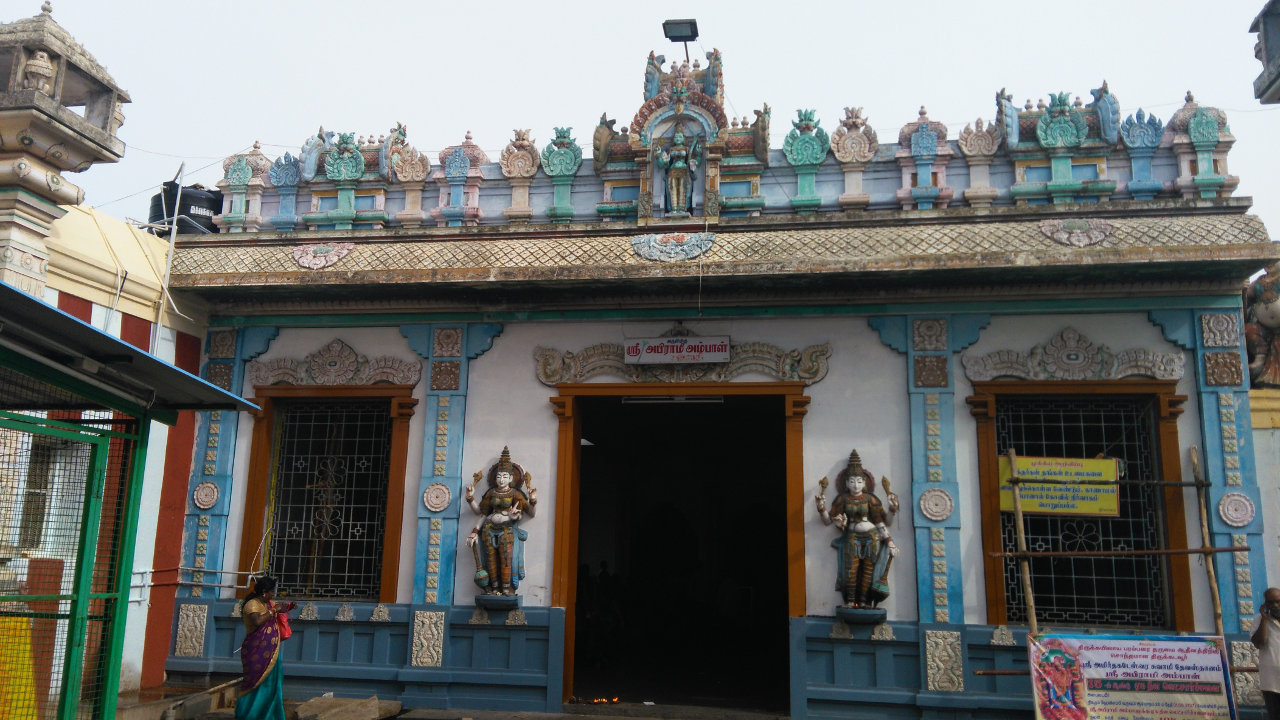 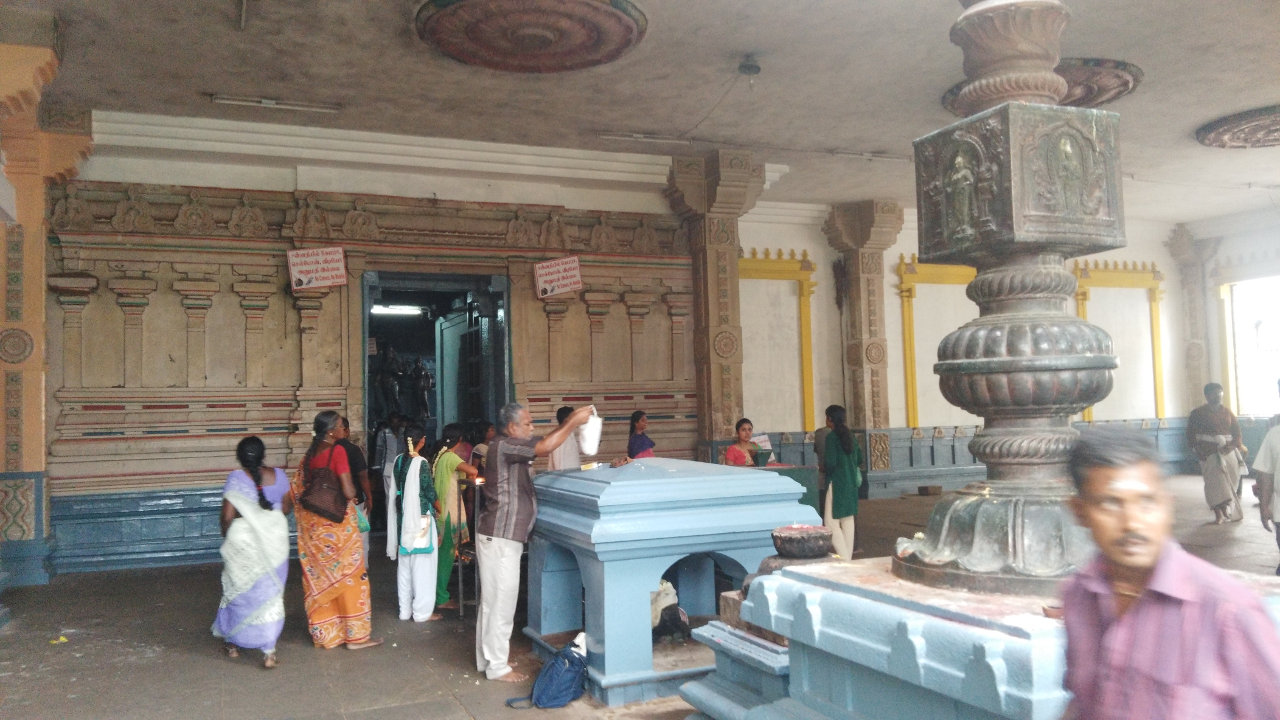 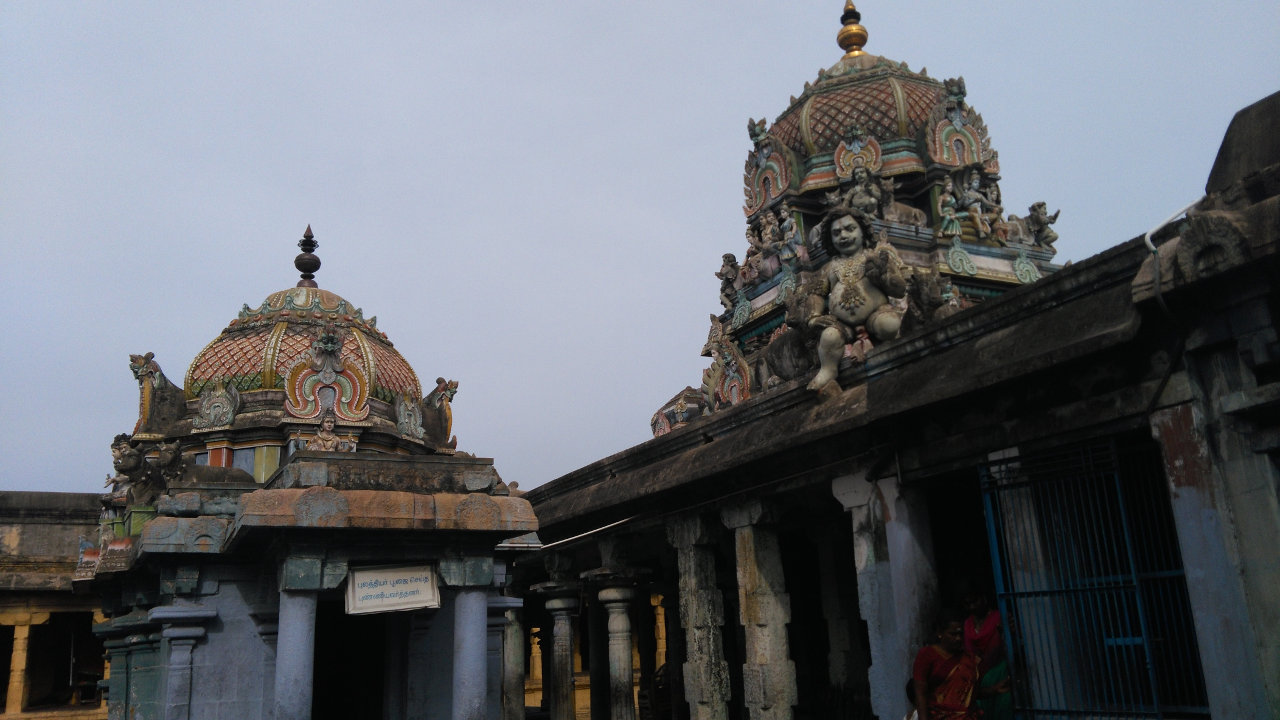 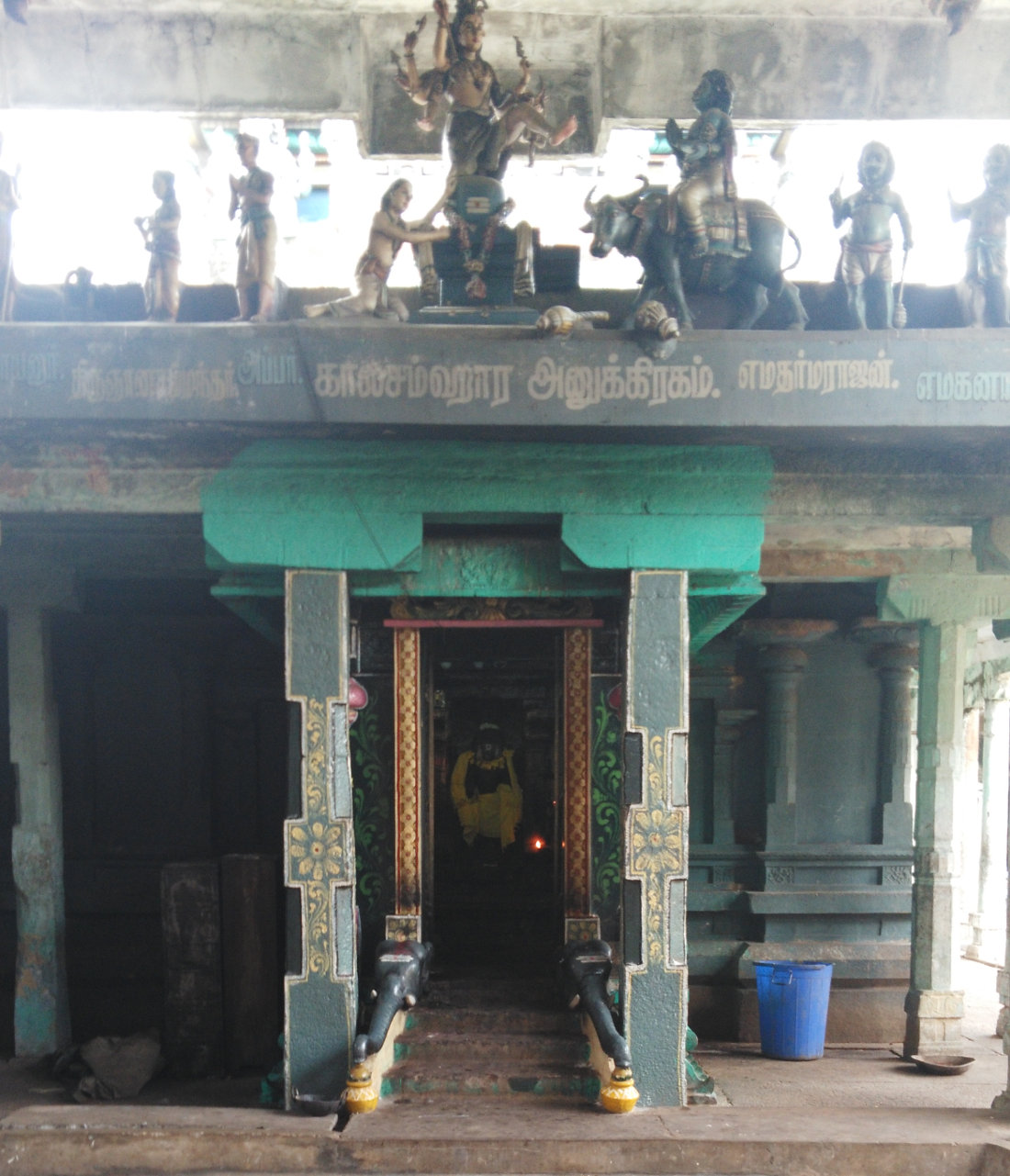 It is believed that there are six places where one can get relieved from the fear of Lord Yama. They are – Thirukkadayur, Thiruveezhimizhalai, Thiruvaiyaru, Thiruvenkadu, Thiruvaikavur and Thiruvanchiyam. Among these, Thirukkadayur is very famous.

It is believed that Lord Shiva facilitated Markandeya’s pooja by bringing the Ganges itself here. The well in front of Lord Brahmapureeswarar’s temple near this temple is believed to have water from the Ganges. Even today, this is the water that is being used for performing “abhishekam” to the lord.

This temple’s “Sthala Vriksham” is Pinjilam - a type of jasmine. It is believed to be more than 2000 years old. It is also believed that this “Pinjilam” variety came along with the Ganges spring. It can be seen in blossom throughout the year and is used only for the purpose of making offerings to the lord. This plant can still be seen in the inner corridor of the temple. Another Sthala Vriksham of this temple is the “Bael” tree (Vilvam tree).

The idol of Sri Kala Samhara Murthy, the fierce form of Lord Shiva, who saved the sage Markandeya from the clutches of Lord Yama, is huge and quite unique. This idol depictgs Lord Shiva with his left leg placed on Adhisheshan and holding his trident pointed at Yama. Yama can be seen under the lord’s other foot. In that same idol, “Boothaganas” (the lord’s security) can be seen dragging Yama with a rope. Goddess Parvathy is depicted as a little girl along with Goddesses Lakshmi and Saraswathy. However, the Yama at the lord’s feet is covered with a metal sheet and this sheet is only removed for a little while at the time of pooja.

The scar from the rope being thrown around Markandeya and the lingam can still be seen on the lingam. This scar is visible only during the time of abhishekam.

Lord “Kalla Varana Pillayar” (Vinayakar) appears with a pot of nectar in his hand.

Goddess Parvathi appears with Lord Bala Murugan on her right side and is praised as “Sri Guhambikai”.

Though the presiding deity in the sanctum sanctorum is only one lingam, a closer look at the lingam will show another reflection of the lingam.

According to the sacred philosophy of “Akash Rahasya” (Chidambara Rahasyam), there is a “Yantra” in the right wall of Sri Kaalasamhaaramurthy’s shrine. This is called the “Thirukadayur Rahasyam”.

It is believed that this is the 108th Shiva Sthalam where Maarkandeyar worshiped Lord Shiva.

The 1008 Sankhabhishekam (conches used for abhishekam) is performed to the deity here because of the belief that Markandeya had performed this form of worship. This festival is celebrated on all Mondays in the Tamil month of Karthikai. This is the only time when the deity can be seen without “vastra” (clothes). During this time the fissure in the lingam is also visible.

There is no Navagraham in this temple. Instead devotees perform the Navagraha poojas to Lord Kalasamharamurthi.

The hymns rendered by each of the three saints mention the legend of Lord Shiva rescuing Sage Markandeya from Yama.

It is believed that many Siddhars lived around this holy place. Among them Pambatti Siddhar is very prominent.

“Poornabishekam” on their 100th birth anniversary,

“Kanakabishekam” on their 90th birth anniversary,

“Sathabishekam” on their 80th birth anniversary,

“Beemaratha Shanthi” on their 70th birth anniversary, and

Patients who are suffering from heart related problems can perform the “Mrutyunjaya Homam” (this can be literally translated as “conquering the God of Death”).

This temple is very famous for conducting 60th and 80th birth anniversaries.

One of the most important festivals celebrated here is the Sankabishekam festival using 1008 conches is celebrated on all Mondays in the Tamil month of Karthikai (Nov-Dec).

Apart from this, the other major festival celebrated here is the 18-day “Yama Samharam” festival in the Tamil month of Chithirai (Apr-May).

Other festivals celebrated here are -

Navarathri in the Tamil month of Purattasi (Sept-Oct);

Aadi Pooram in the Tamil month of Aadi (July-Aug);

Skanda Shasti in the Tamil month of Aipasi (Oct-Nov);

Maha Shivrathri in the Tamil month of Masi (Feb-Mar); and 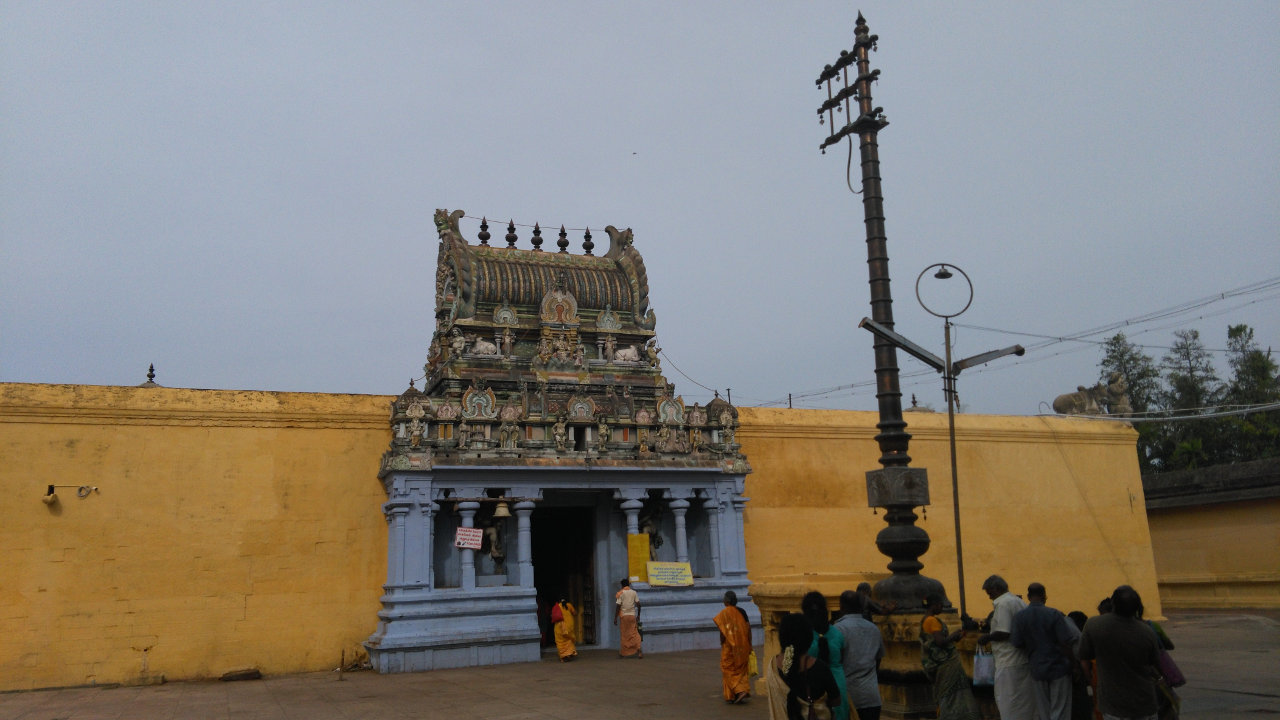 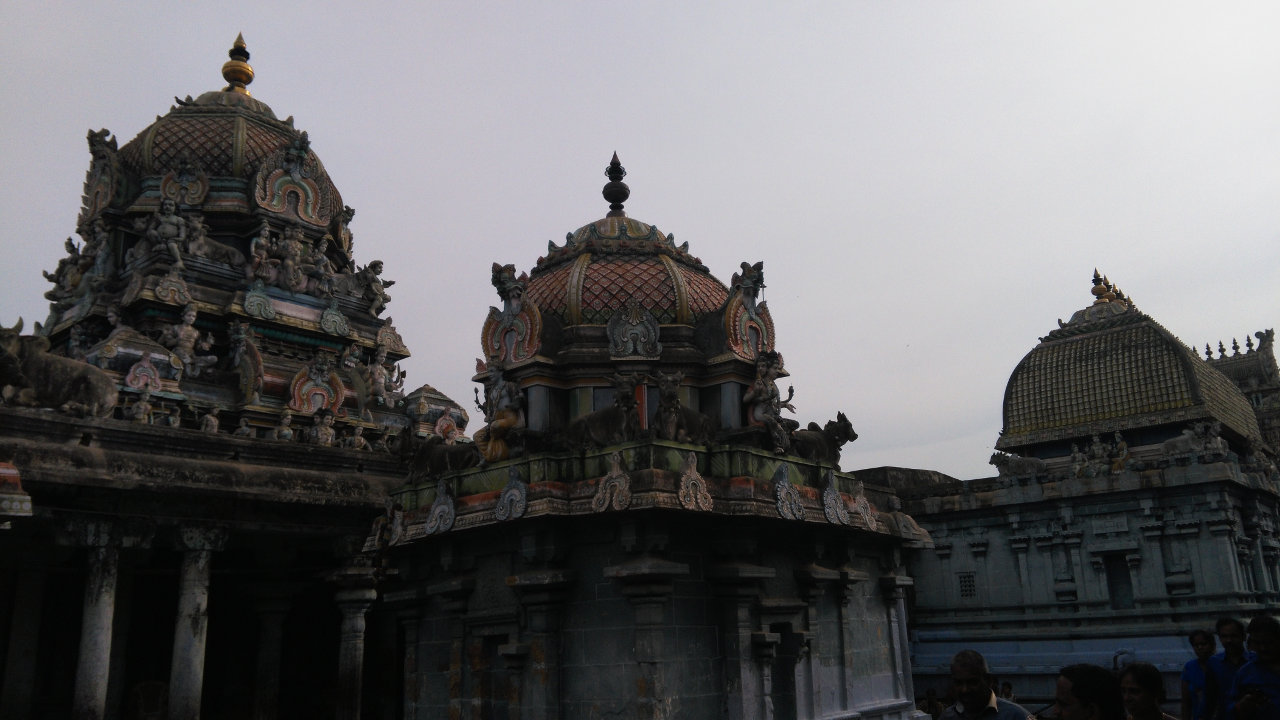 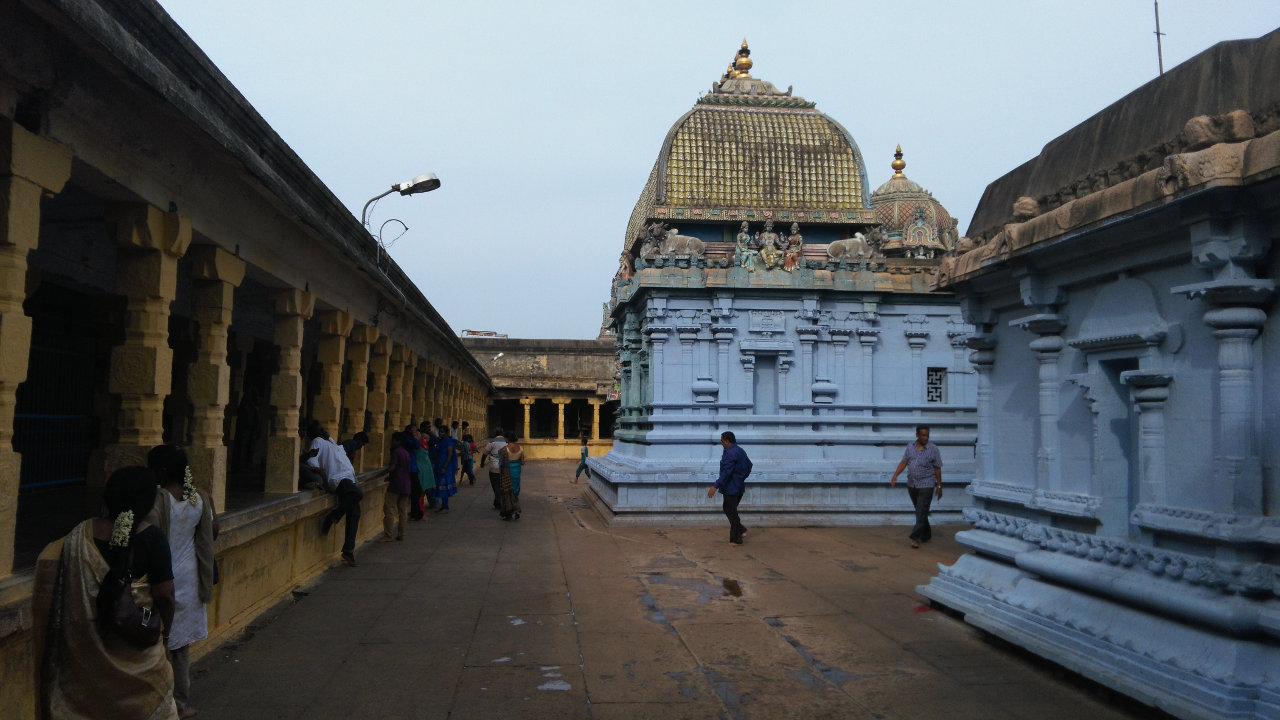 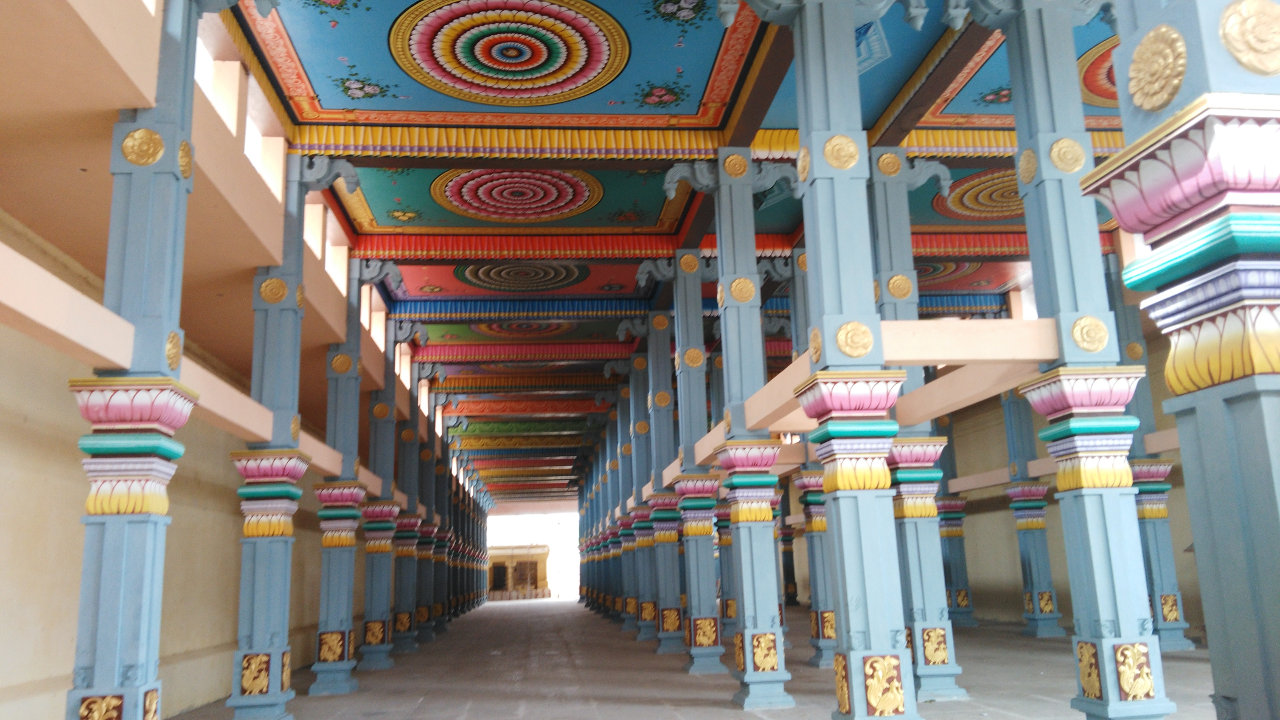