Thiru Pugalur is situated at a distance of about 7 kms to the west of Sannanallur. Sannanallur is on the Thiruvarur to Peralm route.

There are 67 stone inscriptions in this temple which date back to the periods of various Chola kings like Raja Rajan, Rajendran, Kulothungan-I and Kulothungan-III. It is believed that this temple was originally built by Raja Raja Cholan-1. 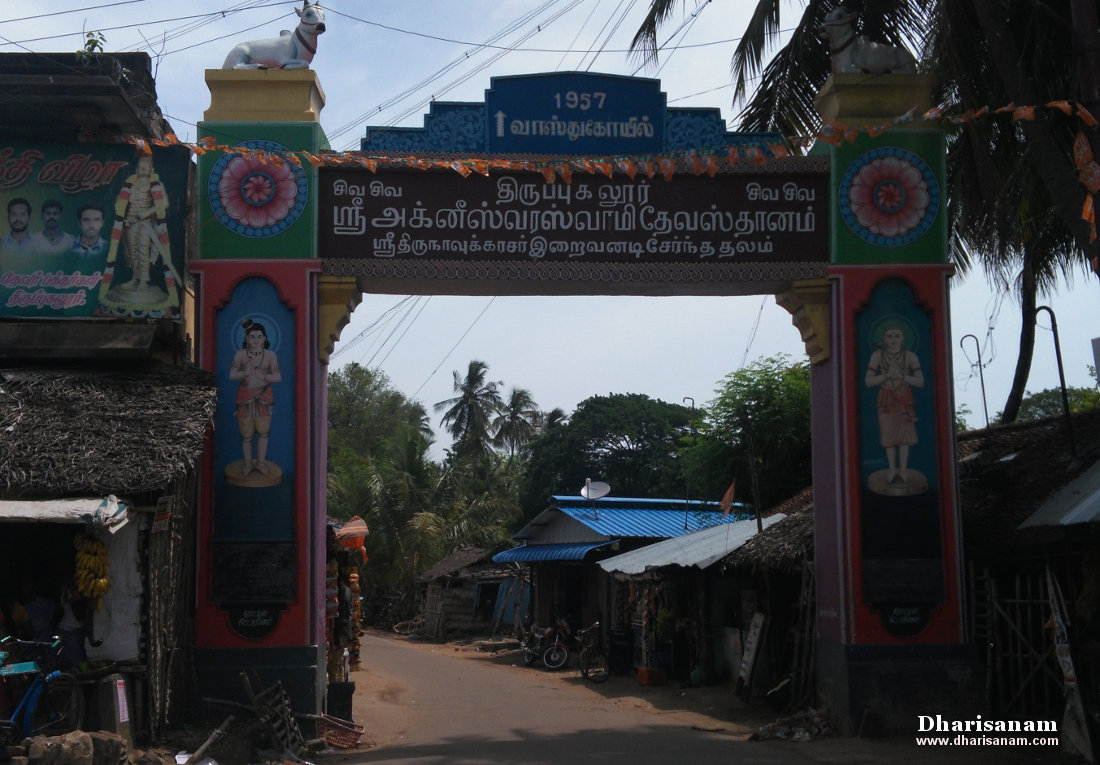 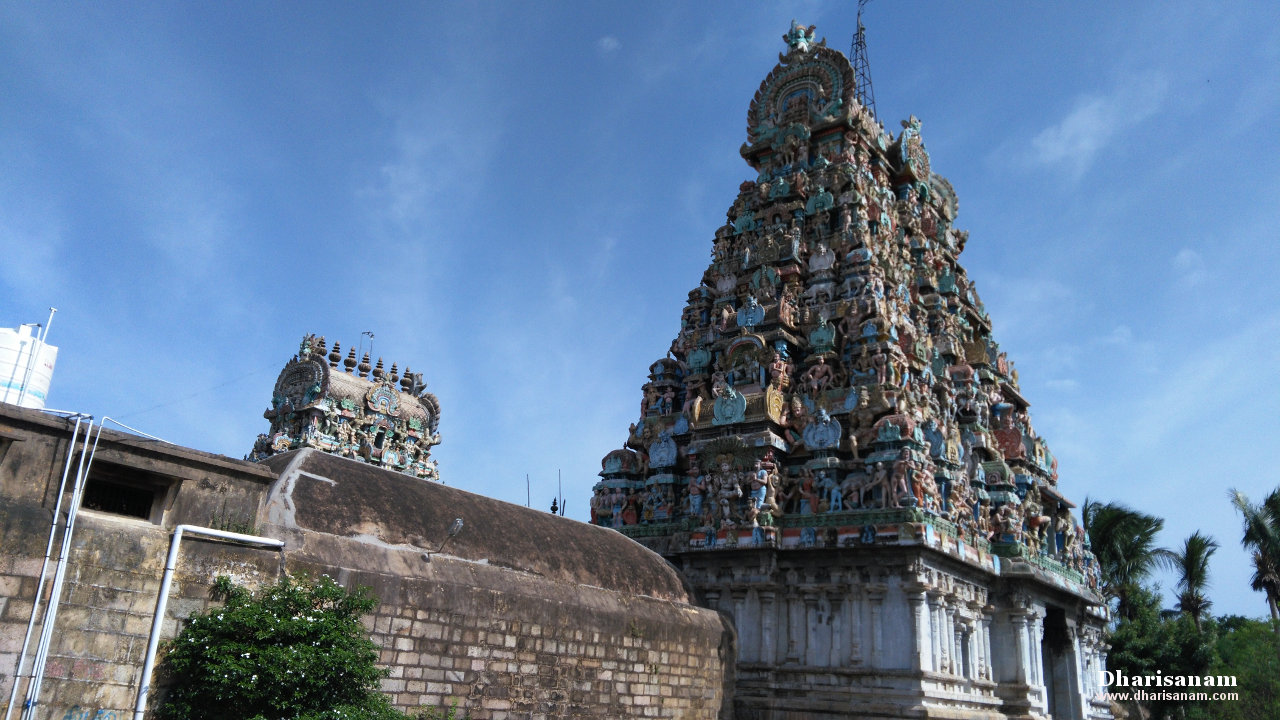 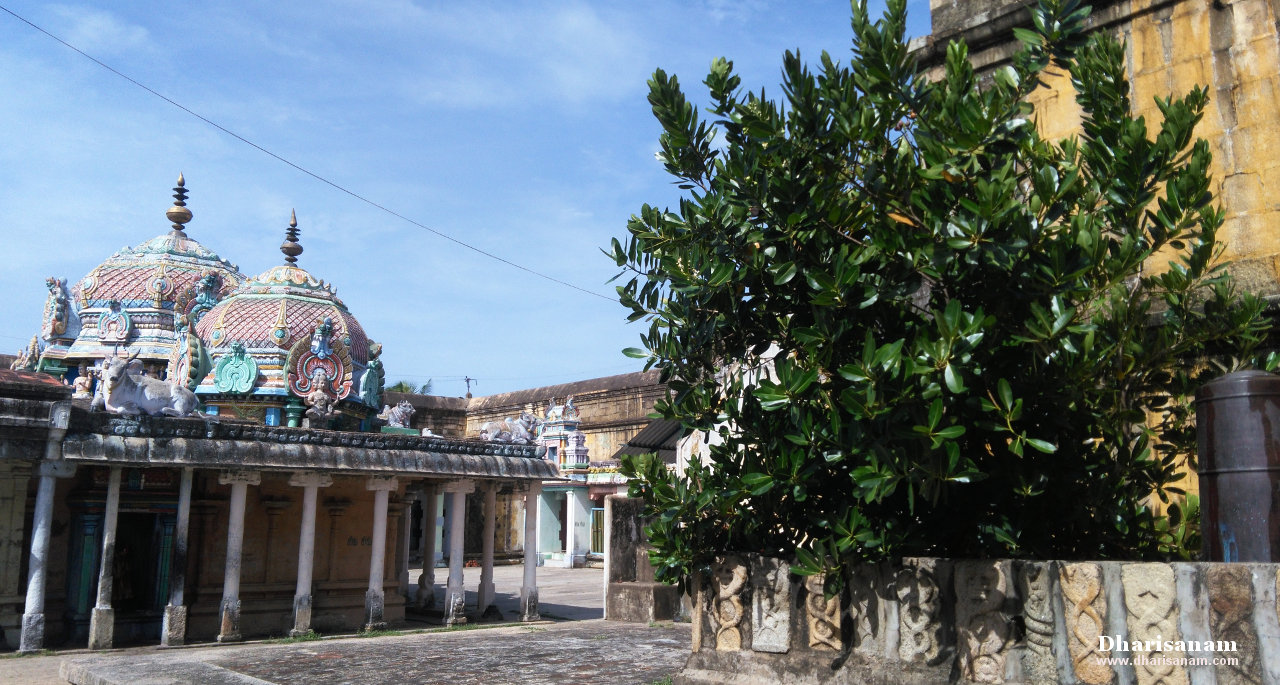 It is believed that Lord Agni, the fire god, worshiped Lord Shiva here. Lord Shiva blessed Agni by giving him a darshan in the form of Chandrasekarar. Agni was relieved of his sins. Hence the lord is praised as Sri Agneeswarar.

As per legend, demon Banasuran, a great Shiva devotee, dug a huge tank (“Akazhi”) around this temple. He tried to carry away the main Shivalingam from here to his mother Mathiniyar’s place for her worship, but he failed in his efforts to do so. During this process, the lord’s lingam got slightly tilted to one side. Hence, this lord is also called “Sri Kona Piraan” (“Konal” means tilted in Tamil).

As per legend, Saint Thirunavukkarasar (Appar) spent a considerable time of his life here and served (“Uzhavaarappani”) the lord of this temple. He used to serve the lord in various Shiva temples by cleaning the grounds and paths to enable devotees to walk comfortably. He did so using a tool called “Uzhavaram”. The lord wanted to test Appar’s devotion. The lord put some gems at the place where Appar was cleaning. But Appar did not show any regard for these gems and threw them out along with the other wastes. The lord then sent some dancers (“Arambayar”) from the celestial world in order to entice him. However, Appar promptly sent them away. This proved to the lord that Appar was completely devoted to him and had no regard for any of the “three wishes” – land, woman and gold.

Appar repeatedly prayed to the lord asking for salvation. He sang his last pathigam, “Ennuken, en solli ennukeno…..’ and by grace of the lord, he attained salvation (“Mukthi”) at the age of 81 on a “Chithirai Sadhayam” star day. He was assimilated into the lord’s idol. This place is praised as “salvation place”. To commemorate this event, a grand festival is celebrated every year on this day called Appar festival.

According to legend, Saint Sundaramurthy Nayanar visited this place to worship the lord and wanted to get some money from him. The Nayanar wanted this money for his wife, Paravai Nachiyar in Thiruvarur. At this time, this temple was undergoing some renovations. After worship, he wanted to take rest for some time. He kept few bricks to support his head and took a nap. On waking up, he found that the bricks were converted into golden blocks by Lord Agneeswara’s grace. The saint was overwhelmed with joy and rendered his “Padhigam”.

Another legend associated with this temple involves a nearby temple (and also a Devara Paadal Petra Sthalam) called Ramanadeecharam. The legend is that a local king prayed to Lord Shiva for child boon and performed a yagna. Through his divine voice, the lord informed the king that he would be blessed with a girl child soon and this child would be an incarnation of Goddess Parvathy herself. At a later date, when the king went to the forest for hunting, he found four young girls under a tree. He brought them to his palace and raised them as his own daughters. When they attained the marriageable age, the king prayed to Lord Shiva and requested the lord to marry them. It is believed that the lord married them. Hence, there are four temples nearby each housing one of the goddesses – Sri Karundhar Kuzhali (in this temple), Sri Vanduvaar Kuzhali in Thirumarugal, Sri Sarivar Kuzhali in Ramanadeecharam and Sri Vaaitha Thirukuzhal Nayaki in Thiruchengattangudi.

It is believed that these four Goddesses once helped a pregnant woman deliver her child. Hence, these goddesses are referred by the common name “Sri Choolikambal” (“Chool” or “Karu” means pregnancy in Tamil). It is believed that when the goddesses returned to the temple after this incident, they stayed at a little distance away from the lord’s shrine. This is symbolically represented in all the four temples as the goddess’s shrine is located separate from the lord’s shrine. In this temple, Goddess Parvathy is also praised as Sri Karu Katha Ambigai.

Lord Shiva is believed to have blessed Goddess Boomi Devi and Sage Satyashada with his Cosmic dance here.

It is believed that Agni, Sage Bharadwaj, all the 18 Siddhars, Saints Thirugnanasambanthar, Appar and Sundarar have worshiped Lord Shiva here.

The idols of Navagraham are not placed in their regular form but are placed in an “L” shaped form.

There are many Shiva lingams here and each of them in a separate shrine. These lingams were worshiped by Lord Murugan, Mahavishnu, Neelakanda Sivachariyar, Sages Jamadagni, Bharadwajar, Thatheesi, Vyasar, Birugu, Pulasthiyar, Jaabali, Lord Indra and Varadarayar.

There is a separate shrine for Saint Thirunavukkarasar in the hall. 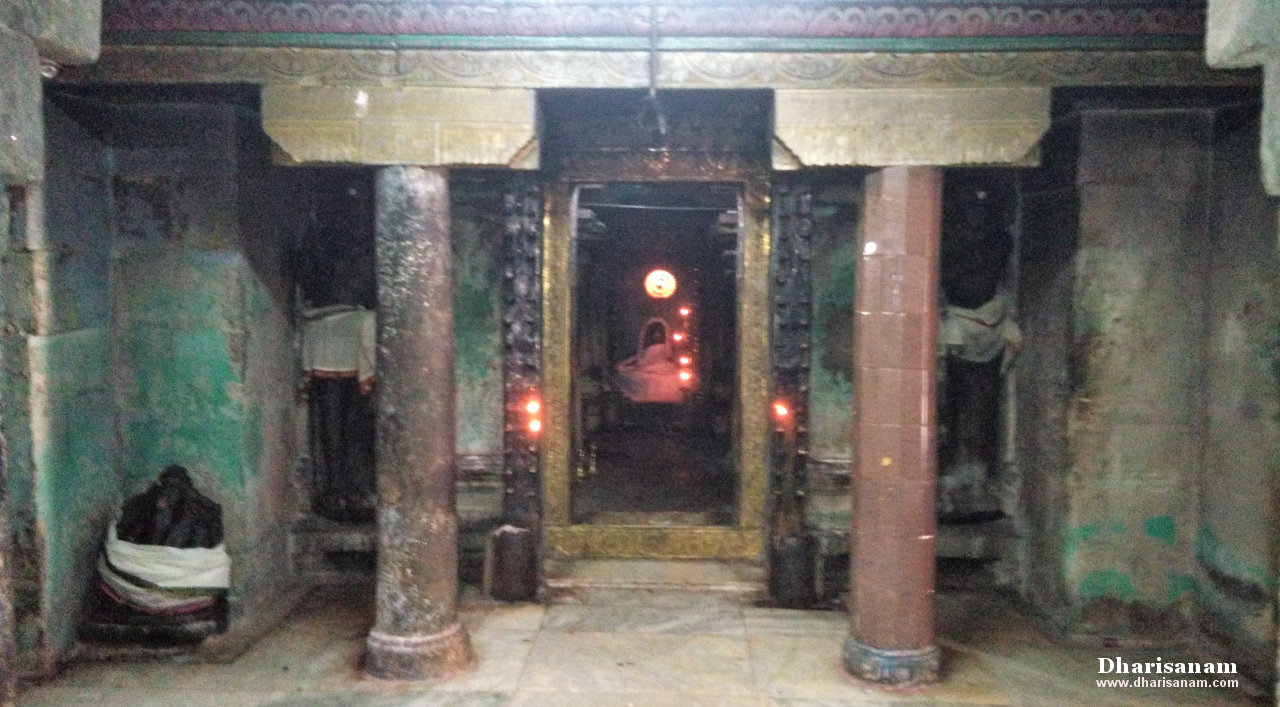 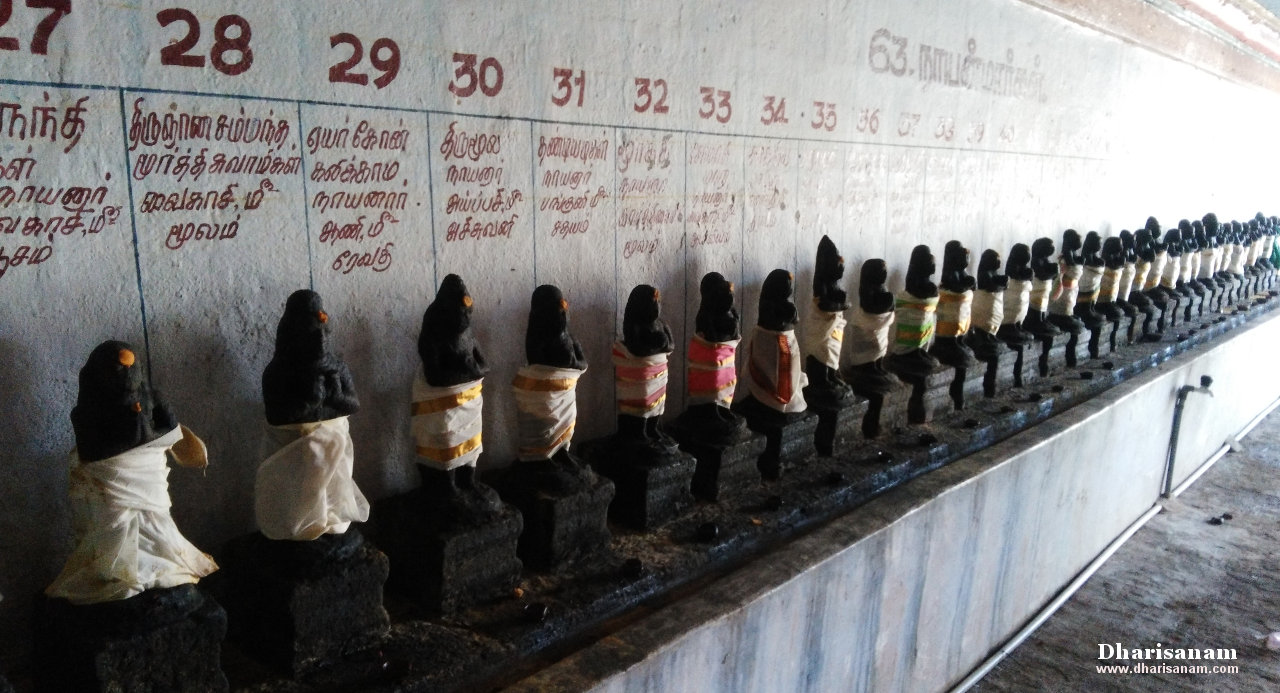 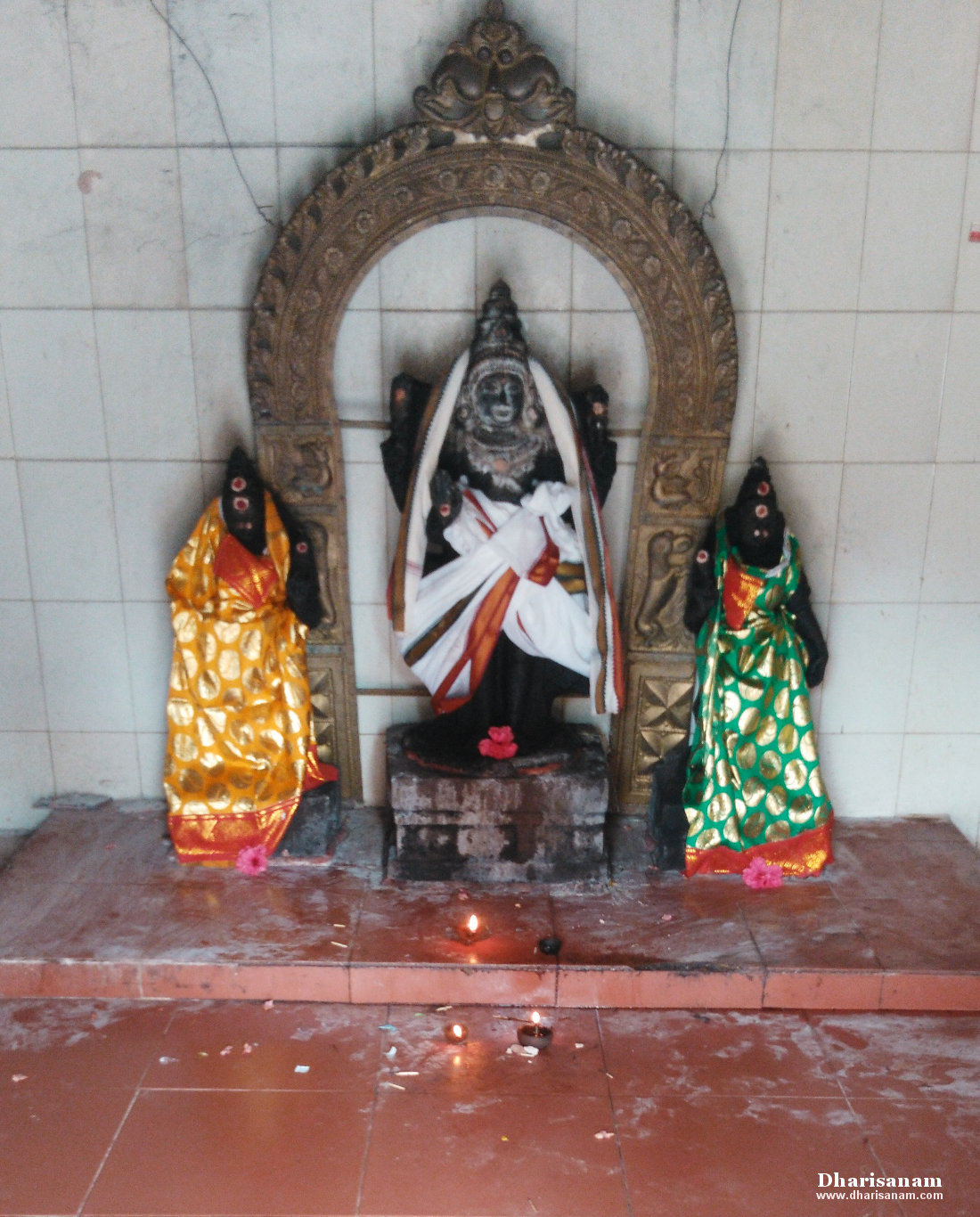 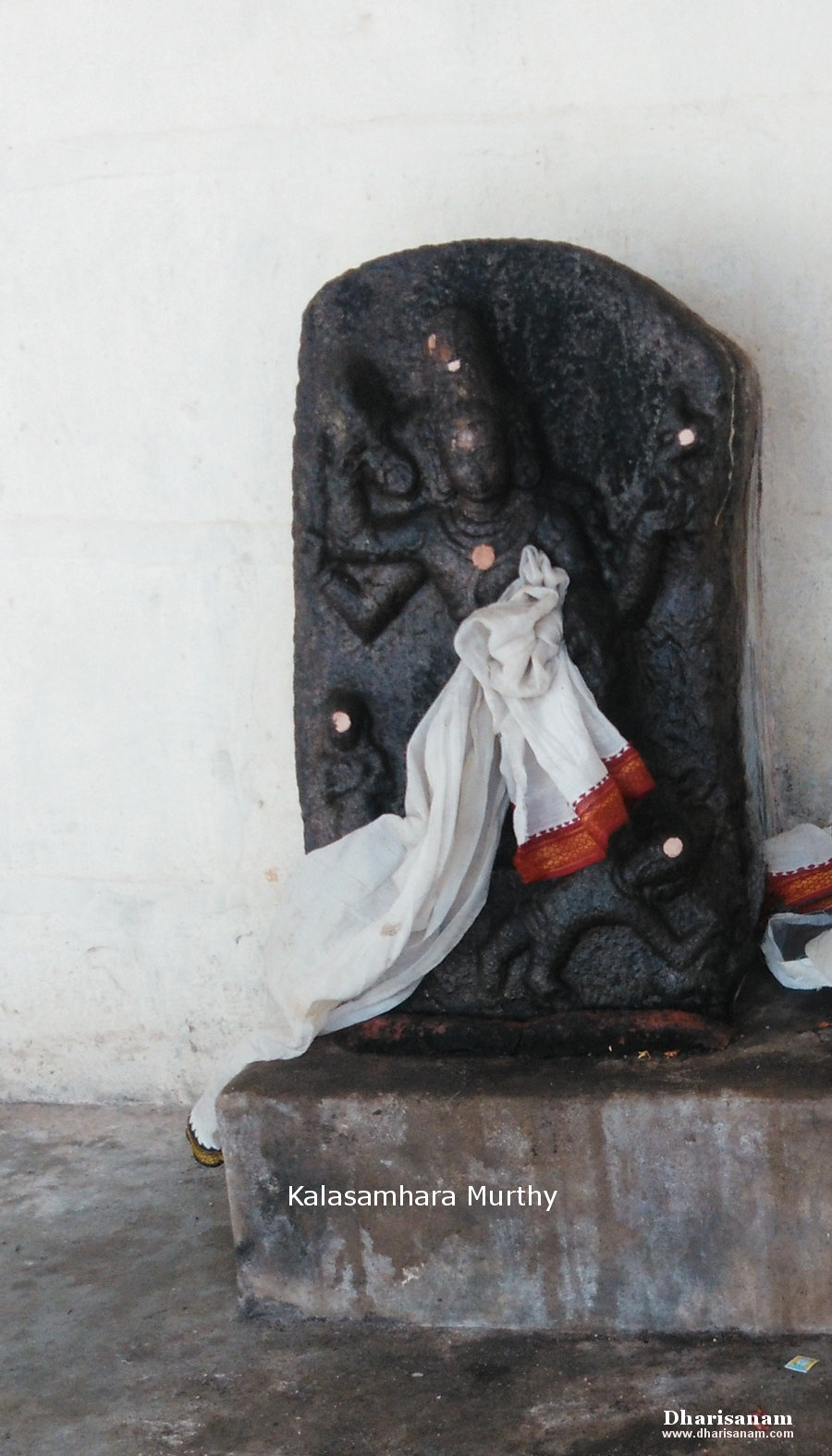 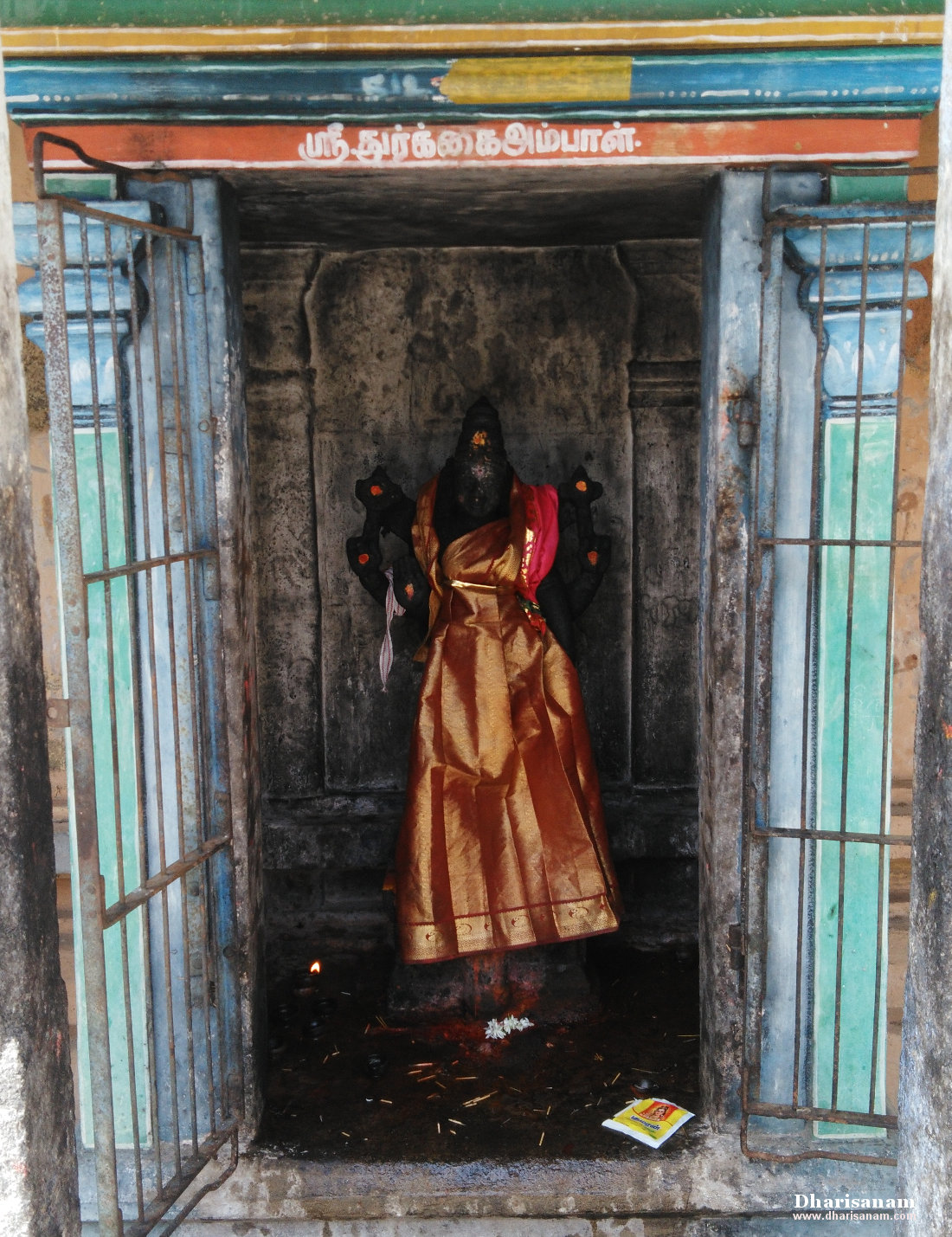 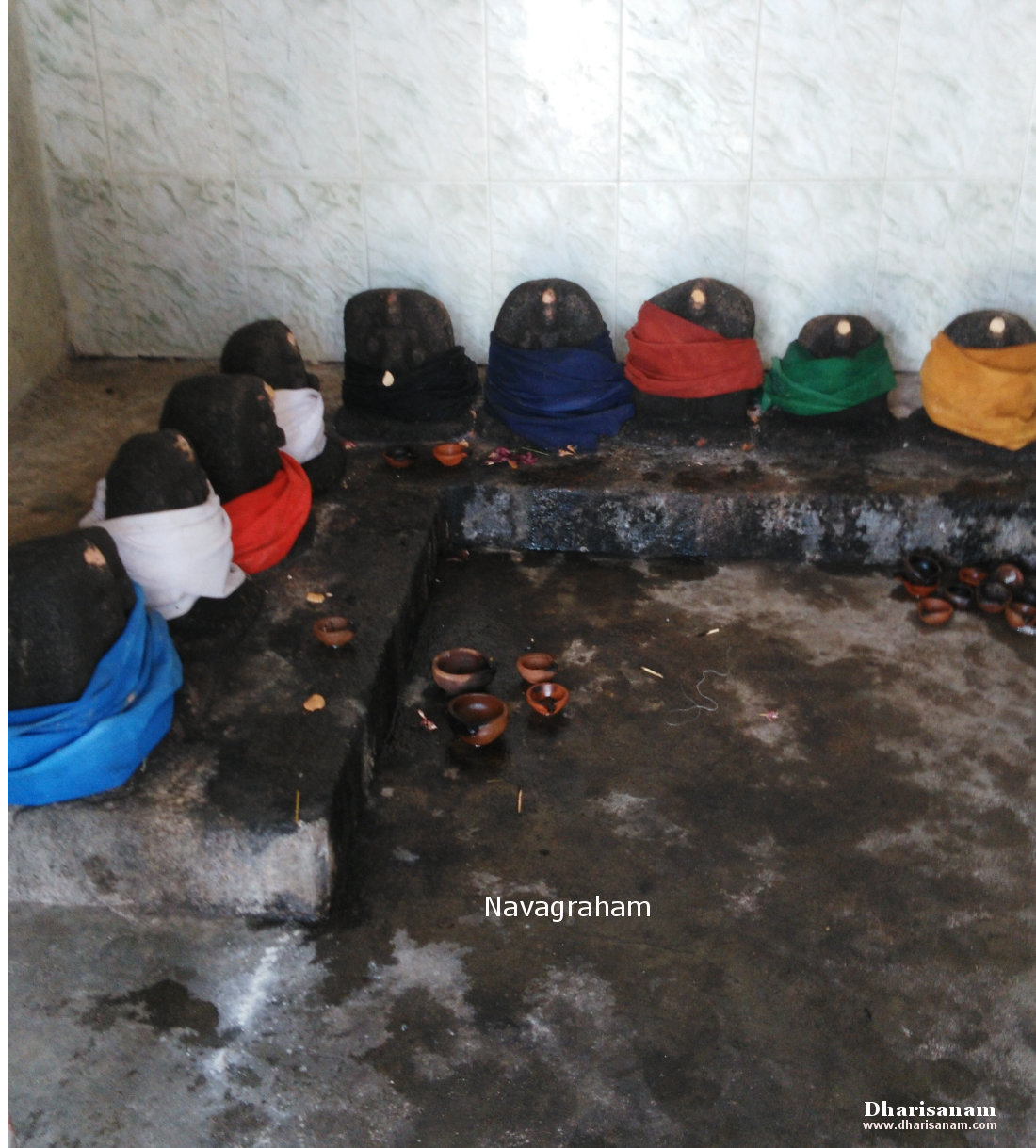 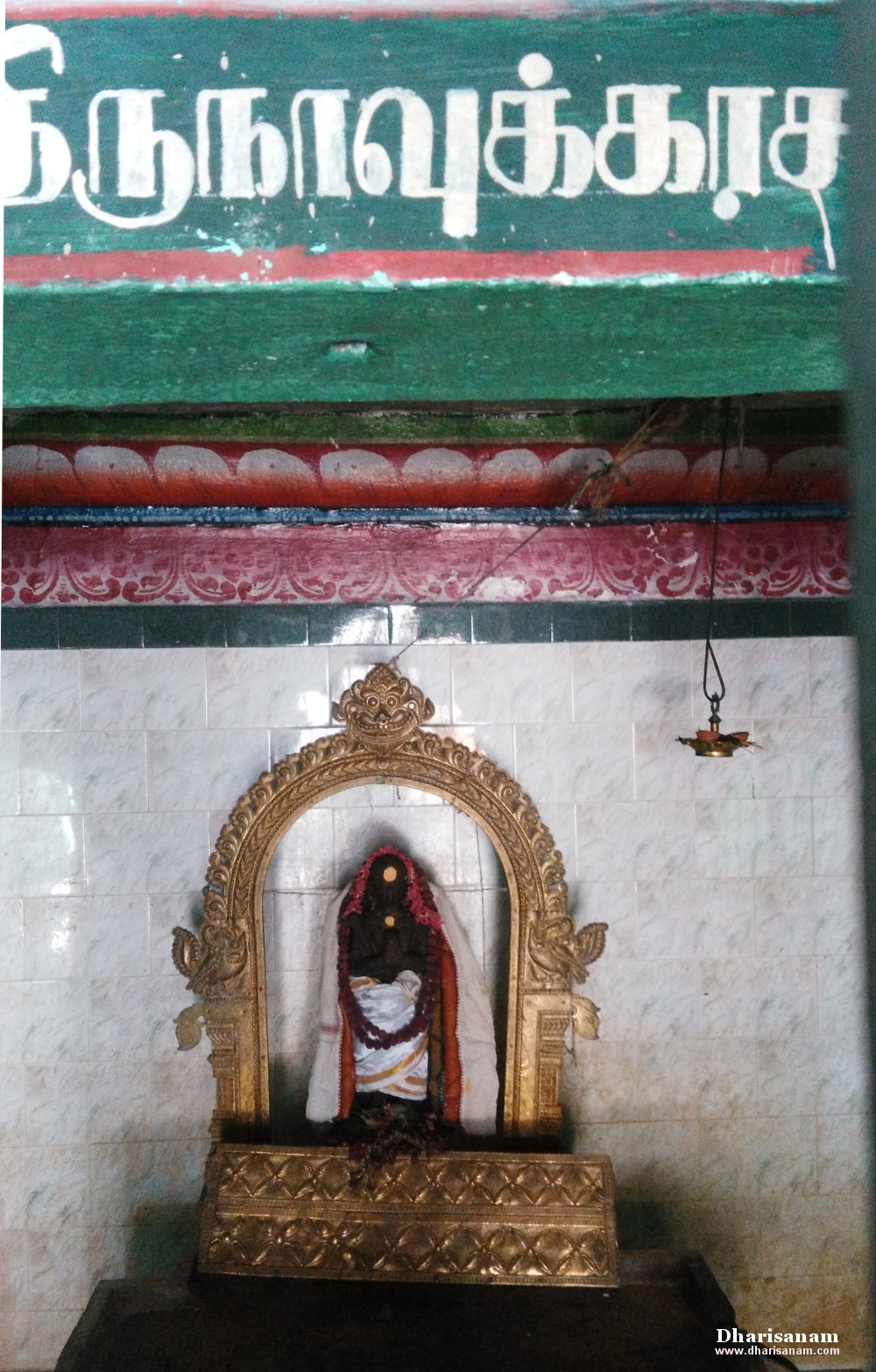 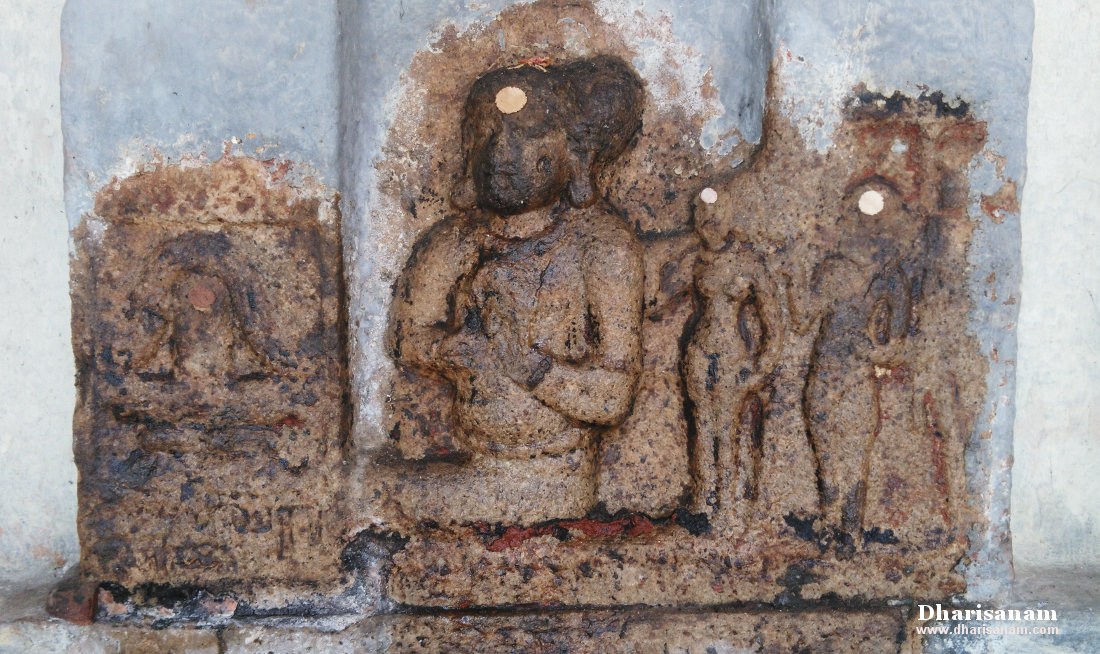 In this temple, Lord Somaskandar is considered very auspicious.

This is the only place where Lord Agni has an idol made of stone and has a separate shrine. Lord Agni is seen with two heads, three legs, seven hands, four horns and seven sparks of fire on his head. The procession idol of Agni is also in the same form.

The procession idols of Agni, Chandrasekarar, Thiripuranthakar and Brahma are incredibly beautiful.

There are three Shivalingams in the names of Lord Bhoodeshwarar, Lord Vardamaneeswarar and Lord Bhavishyeswarar. These three lingams are believed to symbolise the past, present and the future.

This is the birthplace of Muruga Nayanar, one of the 63 Nayanmars. The Nayanar offered flowers to the lord every day with full devotion. He attained salvation at Nallur Perumanam (Aachalpuram) during Saint Thirugnanasambanthar’s wedding.

Behind the sanctum sanctorum, on either sides of Lord Annamalaiyar, there are idols of Lord Mahavishnu and Lord Brahma. Devotees can enjoy the darshan of all the three lords (Trimurthys) – Brahma, Vishnu and Shiva. This is considered to be very auspicious. 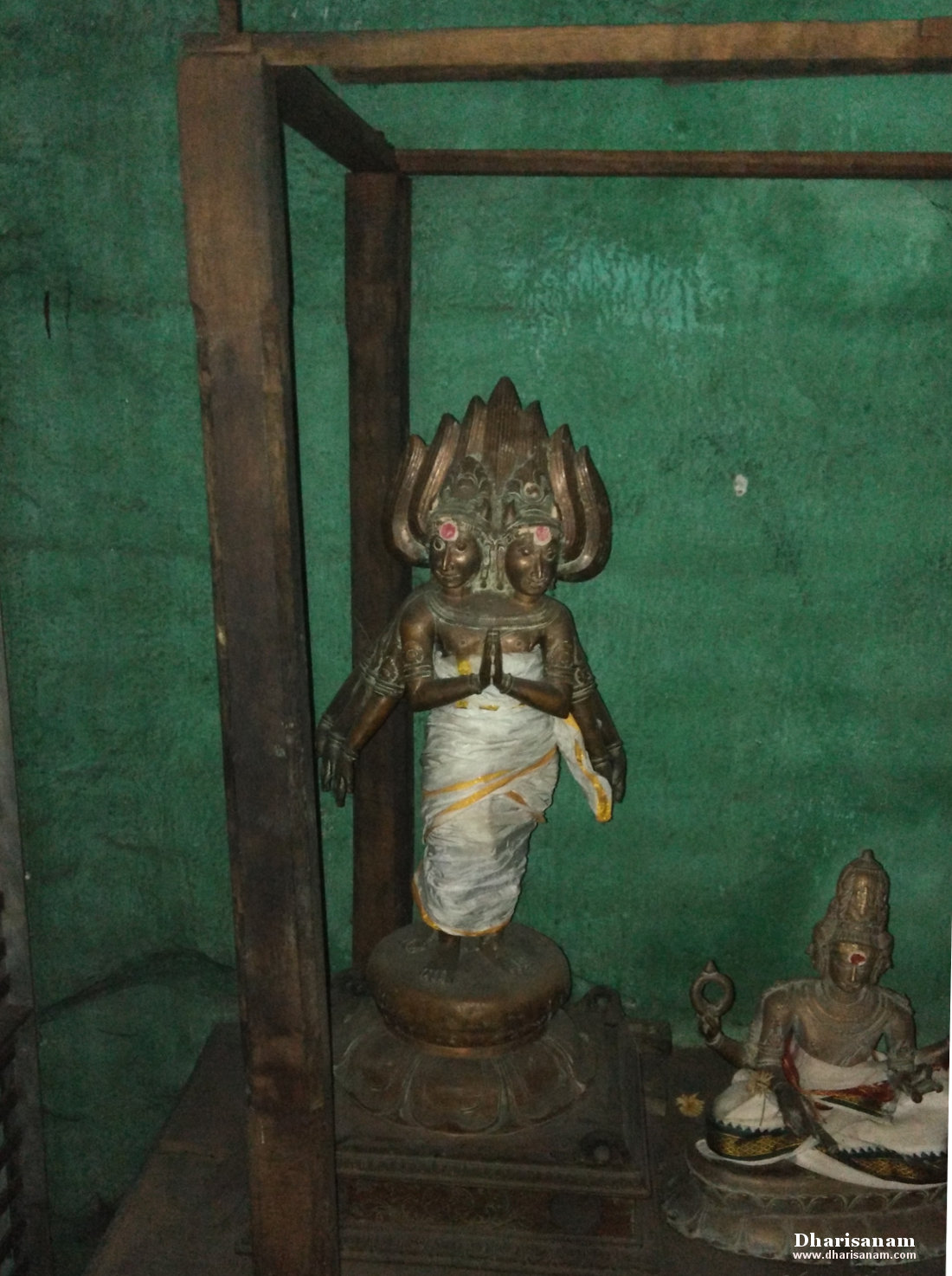 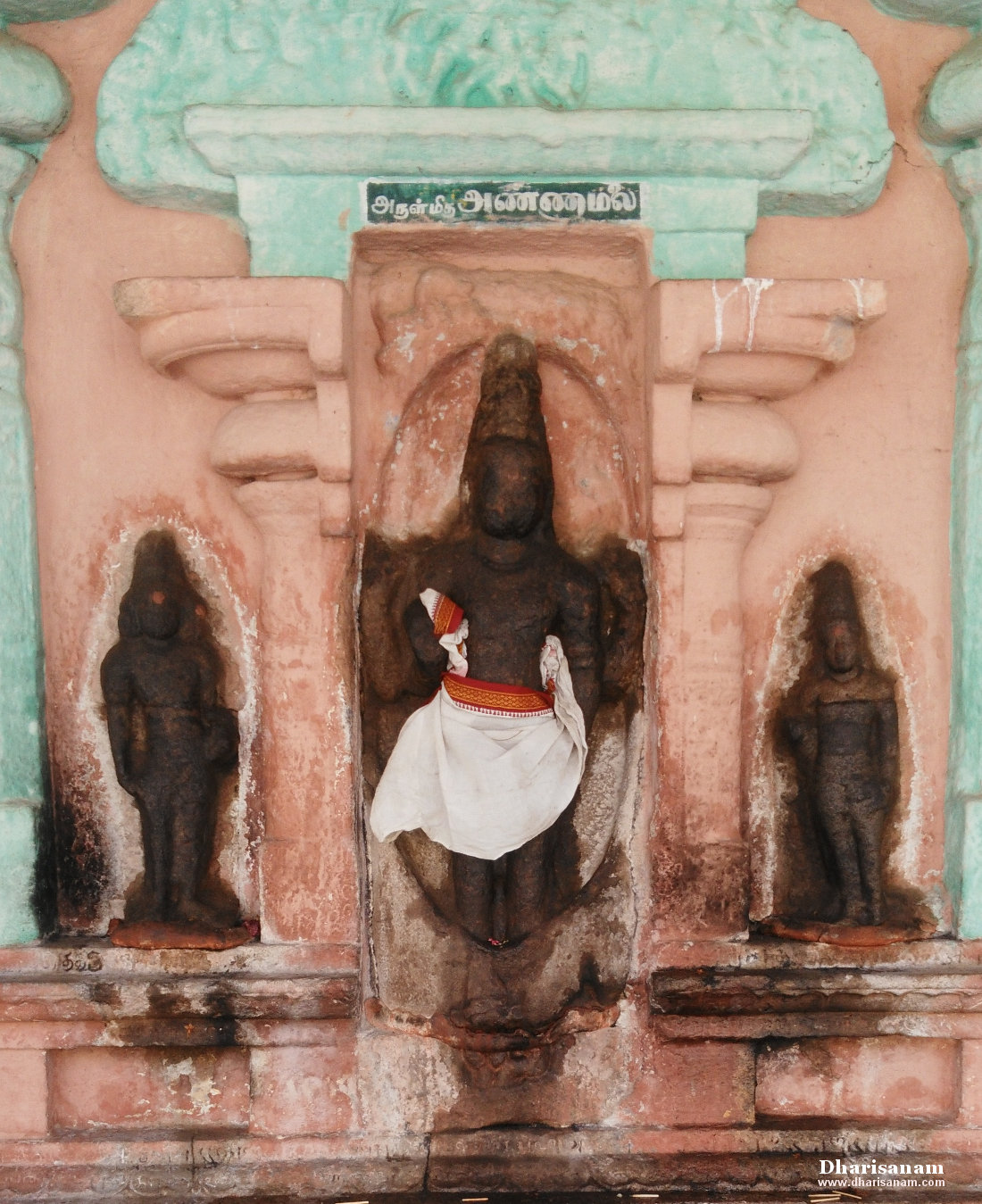 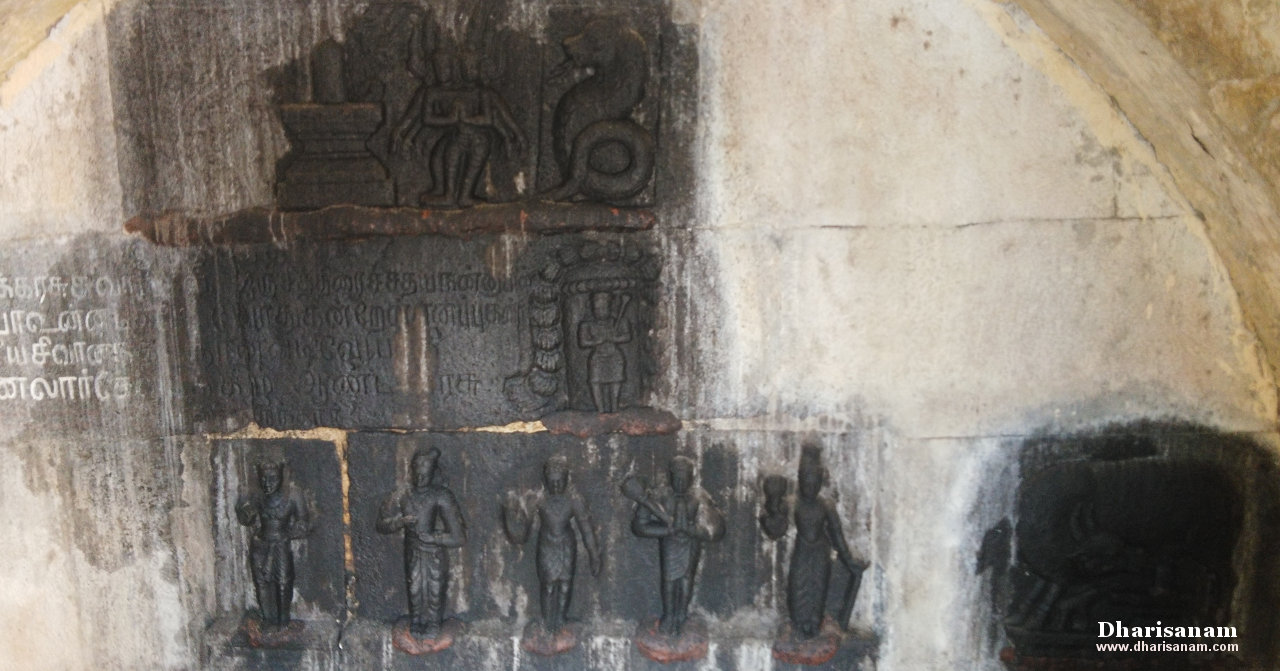 As per “Periya Puranam”, this is the place where five Nayanmars, (Thirugnanasambanthar, Thirunavukkarasar, Siruthondar, Thiruneelanakkar and Muruga Nayanar) sat together and discussed about Saivism. They spent some time here at Muruga Nayanar’s mutt.

There are certain paintings in the walls of the main hall which depicts various legends associated with this temple.

1. One painting shows that Appar threw away the gems (“Navamanikal”) along with the other wastes that he had collected while cleaning the temple.

2. Another painting depicts that some dancers from the celestial world tried to disturb Appar’s service. However, he sent them away.

3. Another painting shows that Sundarar was sleeping with a brick supporting his head and found that it had turned into a golden block the next morning by the grace of the lord.

4. Another panting shows that Banasuran was trying to remove the Shivalingam for his mother’s worship.

5. Another painting shows that Lord Agni was blessed with the lord’s darshan in the form of Chandrasekarar.

This temple’s tank, Agni Theertham is in the form of a semicircle (“Akazhi” in Tamil) around the temple.

Lord Saneeswarar here is praised as “Anugraha Sani” and worshiping him here is considered to be very auspicious.

This is a “parihara sthalam” for those born under the influence of the “Sadhayam” nakshatram (star).

Devotees whose birth star is Sadhayam can visit this temple for special poojas.

Devotees believe that worshiping the lord here will lead to removal of the sins that they might have accrued in their previous births.

This temple is famous for performing “Vastu” pooja.

The two most important festivals celebrated in this temple are –

10-day “Appar Baktha Utsav” in the Tamil month of Chithirai (Apr-May) beginning on Sadhaya Star day. This festival is held every year commemorating the event of Lord Shiva granting salvation to Appar.

Some of the other festivals celebrated here are -

Thiru Karthikai and Somavaram in the Tamil month of Karthikai (Nov-Dec), 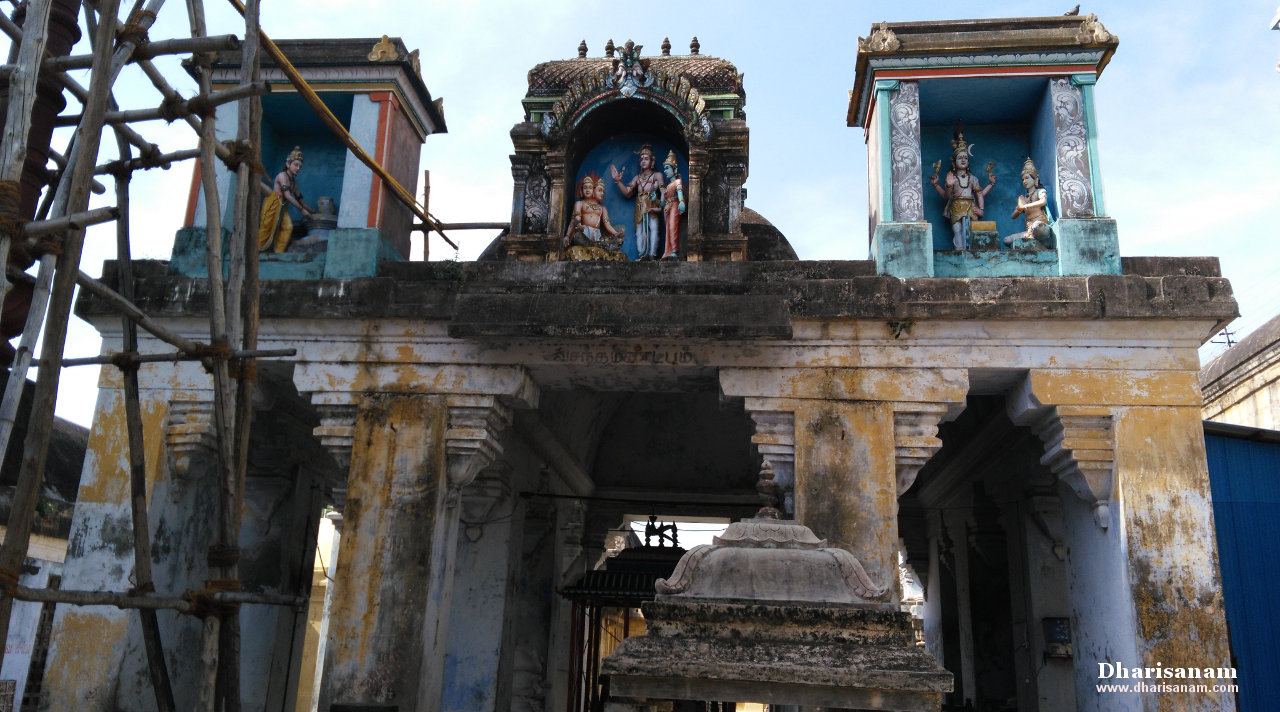 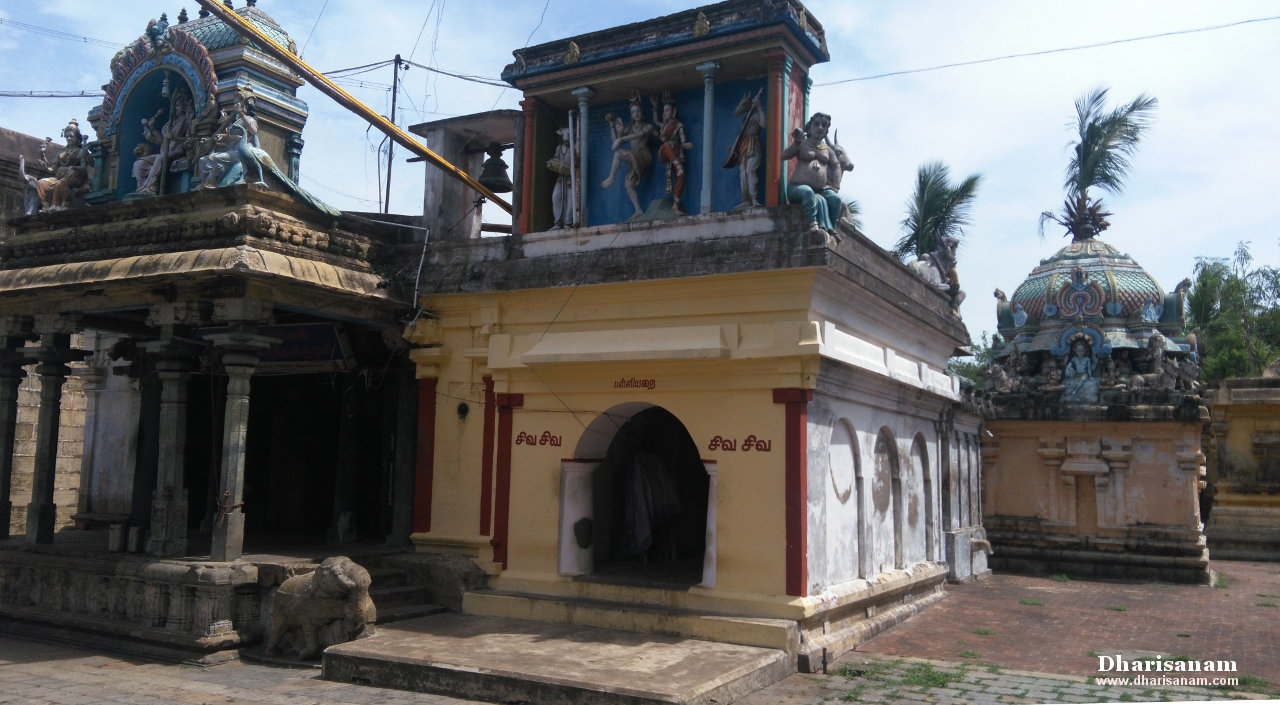 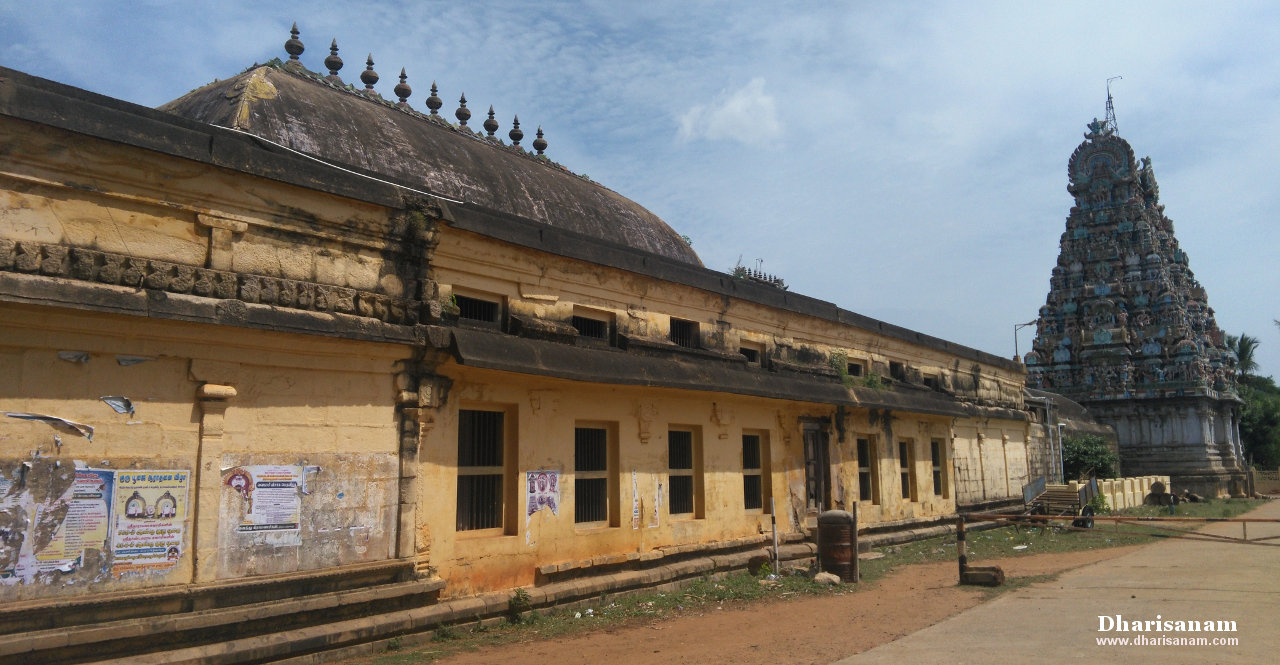 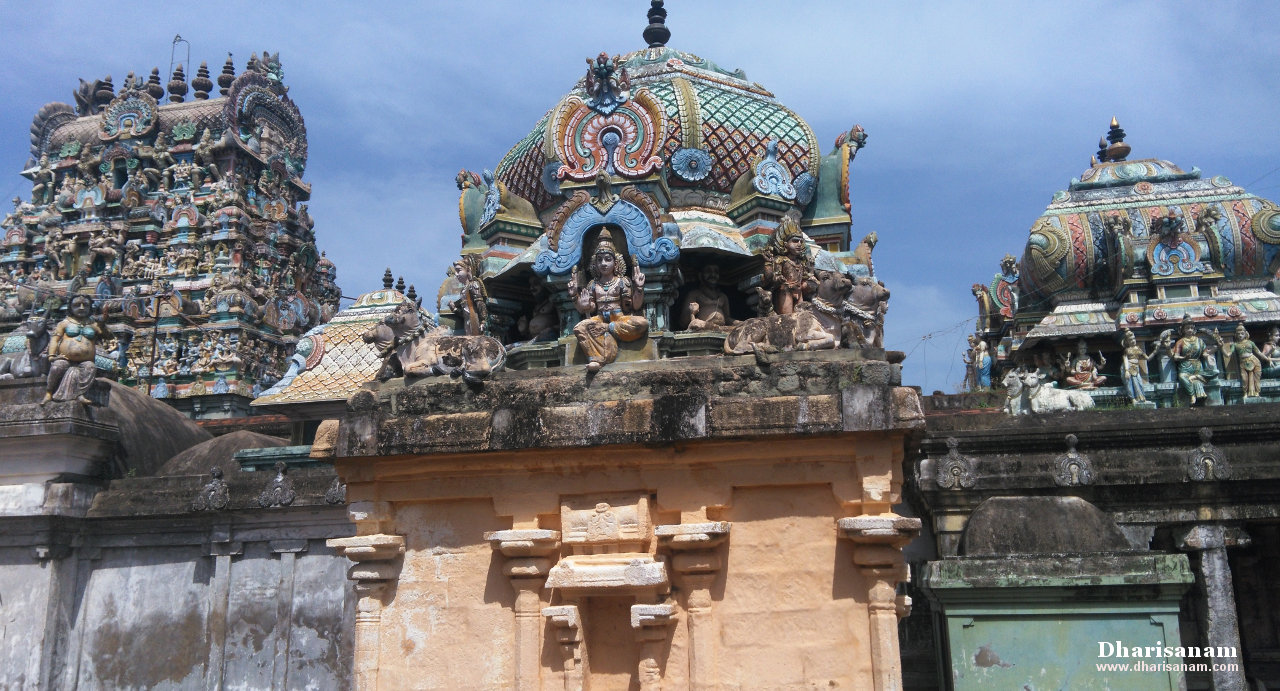 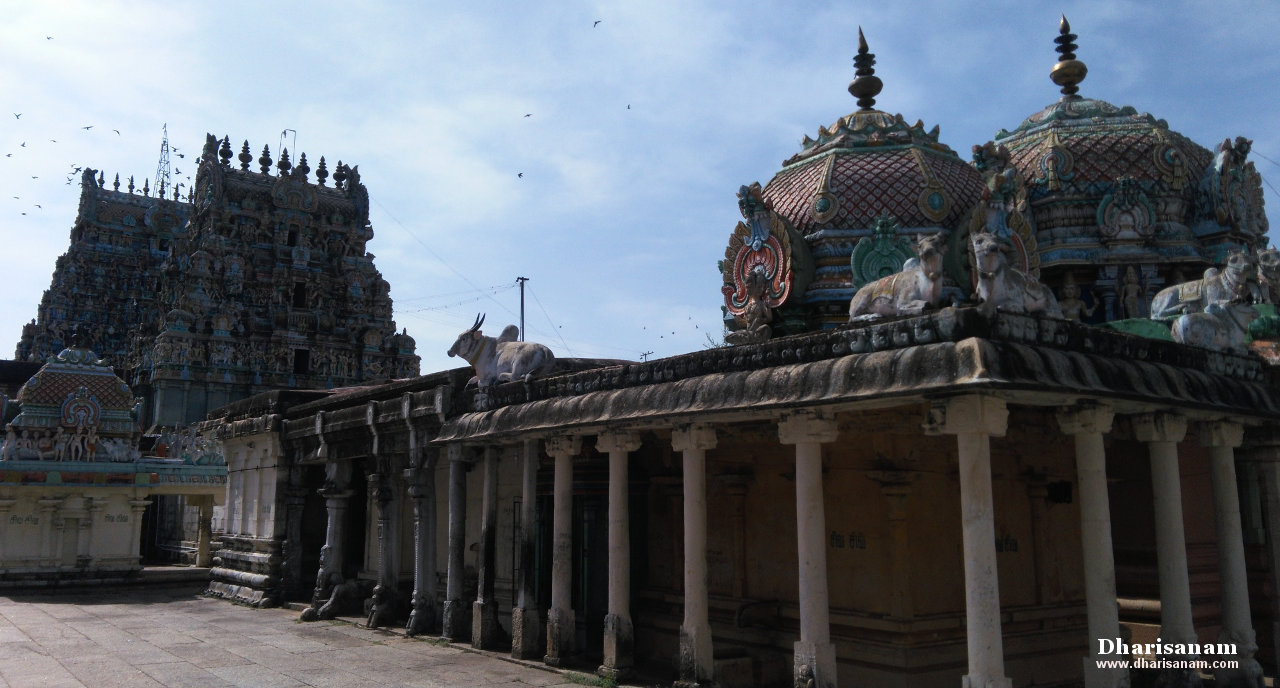