There are certain stone inscriptions available in this temple which relate to the period of Chola Kings Vikraman, Rajakesari, Kulothungan, Veera Rajendran and the Vijayanagara King Krishnaraya Maharayar.

This temple is under the administrative control of Madurai Thirugnanasambantha Swamigal Aadheenam. 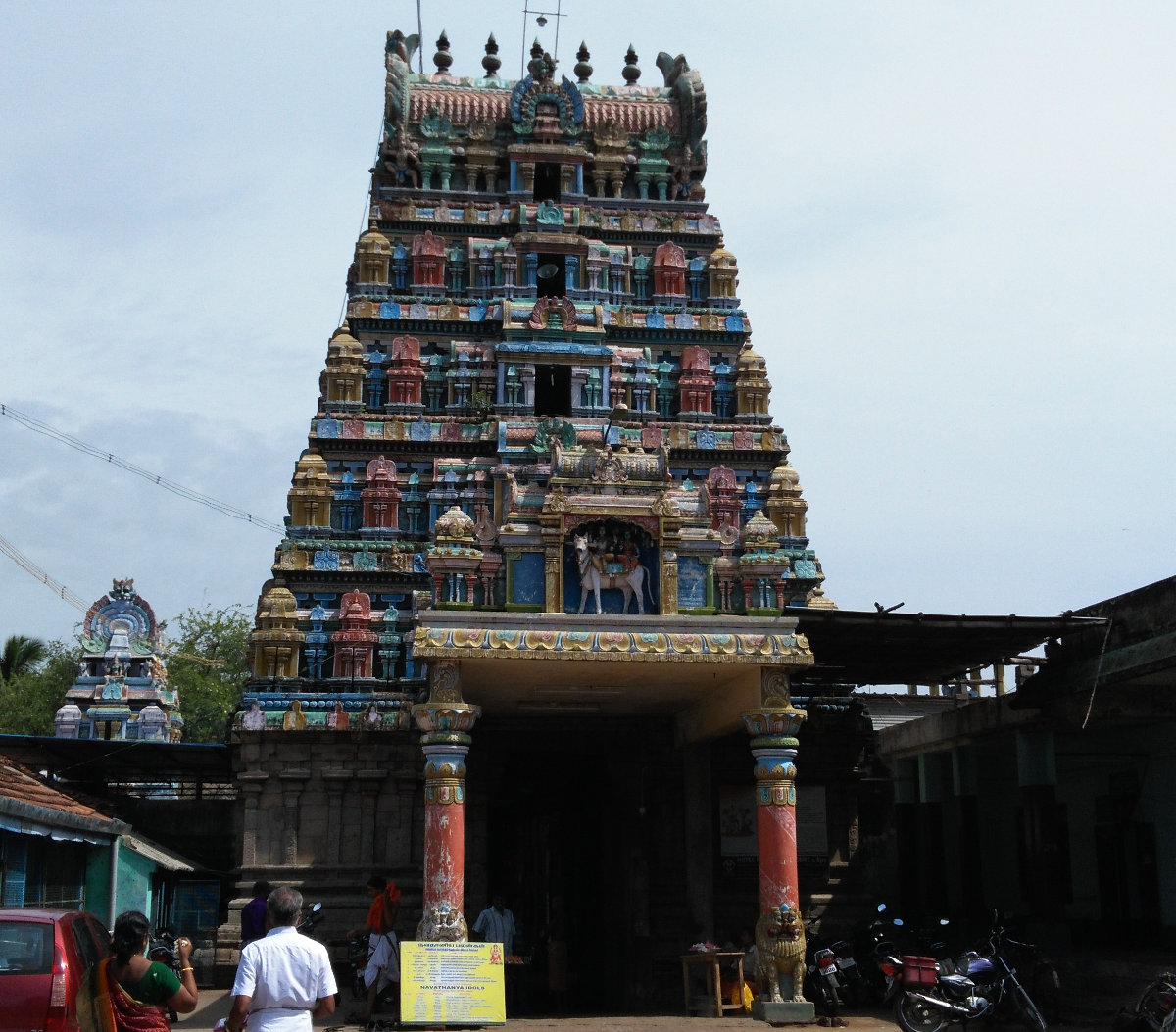 The legend is that Lord Sukran, a staunch devotee of Lord Shiva, visited this place and worshiped him. Sukran is also known as Parkkavan, Sukrachariyar and Kanjan. He is the son of Sage Birugu. As Kanjan (Sukran) worshipped the lord here, this place gets the name Kanjanoor.

Another legend associated with this temple is that of Haradatha Sivachariyar. Haradhathar was born in a Vaishnava family in Kanjanur. His birth name was Sudarsanar. Although he was born in a Vaishnava family, he became a staunch devotee of Lord Shiva. The village people were not happy with his devotion towards Lord Shiva. The villagers asked him to prove his devotion by sitting on a heated iron stool and chant “Sivame paramporul”. 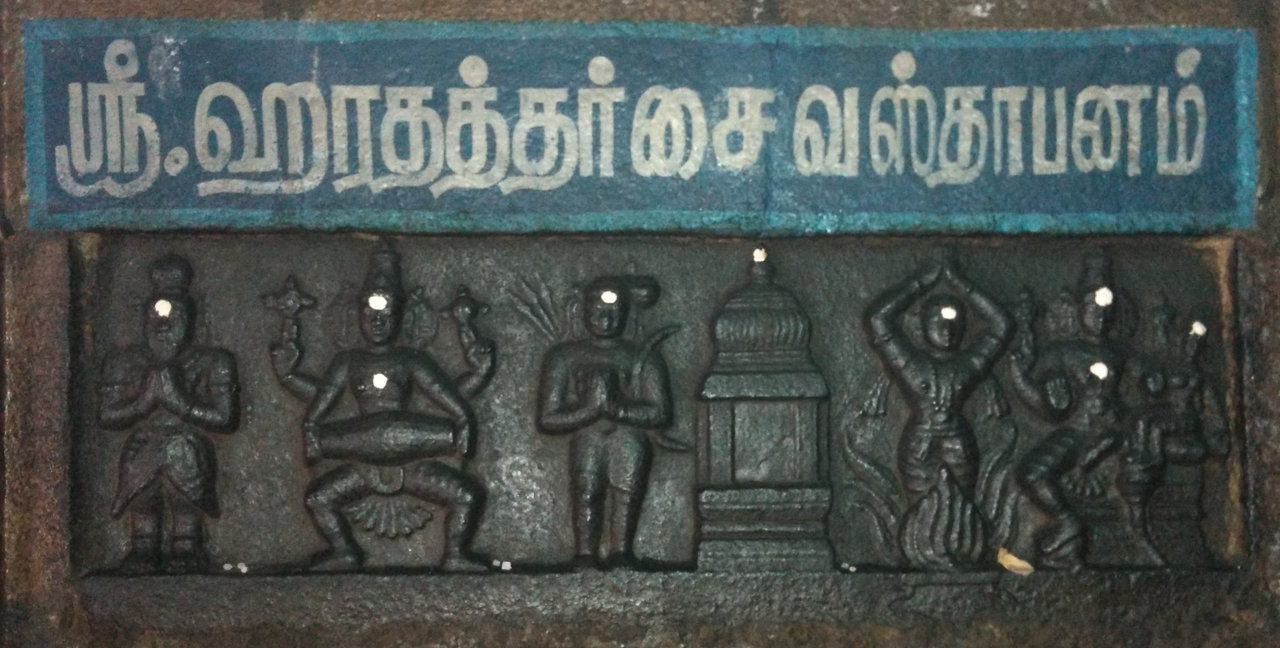 Haradhathar accepted their challenge, sat on the heated stool and proclaimed that “Lord Shiva is the supreme deity and the life force behind everything on this earth”. The villagers were so enamoured by his devotion that some of them even converted to Saivism.

It is believed that Haradhathar used to visit 7 Shiva temples (Kanchanur, Thirukkodikka, Thiruvalankadu, Thiruvavaduthuri, Then Kurangaduthurai, Thirumangalakkudi and Thirumanthurai) every day before taking his dinner. One day when he left Kurangaduthurai temple, there was heavy rain and in the darkness, he was unable to find his way back to the village. It is believed that Lord Shiva came in the guise of a brahmin and took him home.

It is also believed that Haradatha Sivachariyar was blessed by Lord Shiva who visited his house in the guise of a devotee and took the food that was offered.

Another legend associated with Haradatha Sivachariyar is that he was able to feed grass to a stone Nandhi in this temple after reciting the “Shiva Panchatcharam”. He also showed the world the importance of the 5 letters - “Sivayanamah”.

It is believed that Lord Dakshinamurthy took him as a student and taught him the “Shiva Gnanam”. The lord further pronounced that Sudarsanar would henceforth be called as “Haradatha Sivachariyar”.

Another legend associated with this temple is that of a wealthy Shiva devotee who would offer food to Lord Agneeswarar every day. It is believed that every day the lord would appear in his dream and consumed the food that was offered. However, one day the lord did not appear in his dream. He tried his best to find out the reason and finally he came to know that the lord, in the form of an aged brahmin, had gone to Haradhathar’s place instead. On learning about Haradhathar and his accomplishments, the devotee visited him and offered his respect. Sculptures depicting this incident can be seen in the temple.

Another legend associated with this temple is that of a devout farmer. It is believed that he used to offer vegetables to Lord Shiva and then feed devotees. One day he was left with only one piece of “Suraikkai” (a green vegetable). He thought that this vegetable was not suitable enough to be offered to the lord and the devotees. He decided to extract the seeds from it and plant them. It is believed that Lord Shiva visited his house in the guise of a devotee and asked for food. The farmer was in dilemma as he did not have anything except for that suraikkai. At this point, it is believed that the lord’s divine voice was heard saying that “Oru pathi vidhaikku, oru pathi karikku” (keep one half for seed and the other half for me). The farmer immediately cooked and offered it to the guest. Lord Shiva appeared before him and blessed him. Henceforth, the farmer came to be known as “Suraikkai Bakthar”. 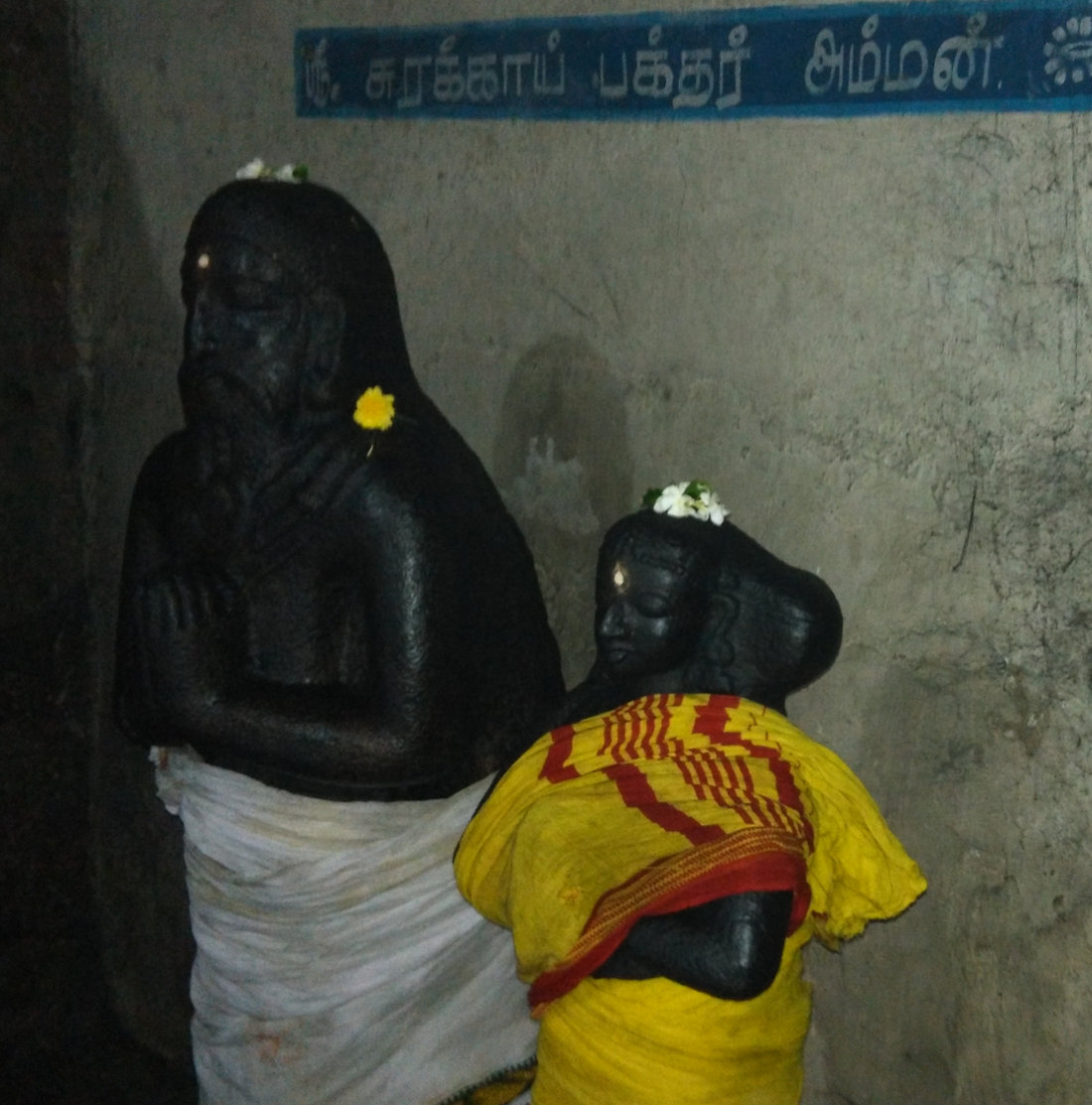 A few more legends associated with this temple are -

Lord Chandran got relieved from his curses.

Lord Brahma got the opportunity to see Lord Shiva’s wedding darshan in this temple.

On the advice of Sage Vyasa, Agni worshiped the lord here and was cured of his ailments. Hence the lord is also praised as “Sri Agneeswarar”.

It is also believed that Kamsan, the king of Madura Puri and the son of King Ukrasenan, was suffering from some ailments. Sage Sukrachariyar advised him to visit this temple and worship the lord. Kamsan came here, worshiped the lord and was cured of his ailments. Hence, this place also gets the name “Kamsapuram”.

Other than the shrines for Lord Shiva and Goddess Parvathy, shrines and idols of lords Vinayakar, Mayura Subramaniar, Vishwanathar, Natarajar with Sivakami, Mahalakshmi, Anjaneyar, Nalvar, Suryan, Chandran, Saneeswarar, Navagraham and Bairavar can be seen in the corridors. The idol of Natarajar (made of stone), Kalikkama Nayanar and Manakkanchara Nayanar can also be seen in the corridors.

The idol of Goddess Aadhi Karpakaambal can be seen near Goddess Parvathy’s shrine.

Planet Sukran’s shrine in this temple attracts a large number of devotees.

Idols of Haradhathar and Suraikkai Pakthar with his wife can be seen in the corridors.

In the “koshtam” (place surrounding the sanctum sanctorum), idols of Narthana Vinayakar, Dakshinamurthy, Lingothbavar, Durgai and Chandikesarar can be seen.

The stone idol of Lord Natarajar with Goddess Sivakami is very beautiful and is worth seeing.

As Lord Shiva granted his wedding darshan to Lord Brahma here, Goddess Parvathy’s shrine is seen on the right side to the lord’s shrine.

The idol of the stone Nandhi which is believed to have taken the grass from Haradhathar can also be seen here.

There is a separate temple in the outskirts of the village for Haradhathar. In that temple, Haradhathar can be seen worshiping Lord Shiva. 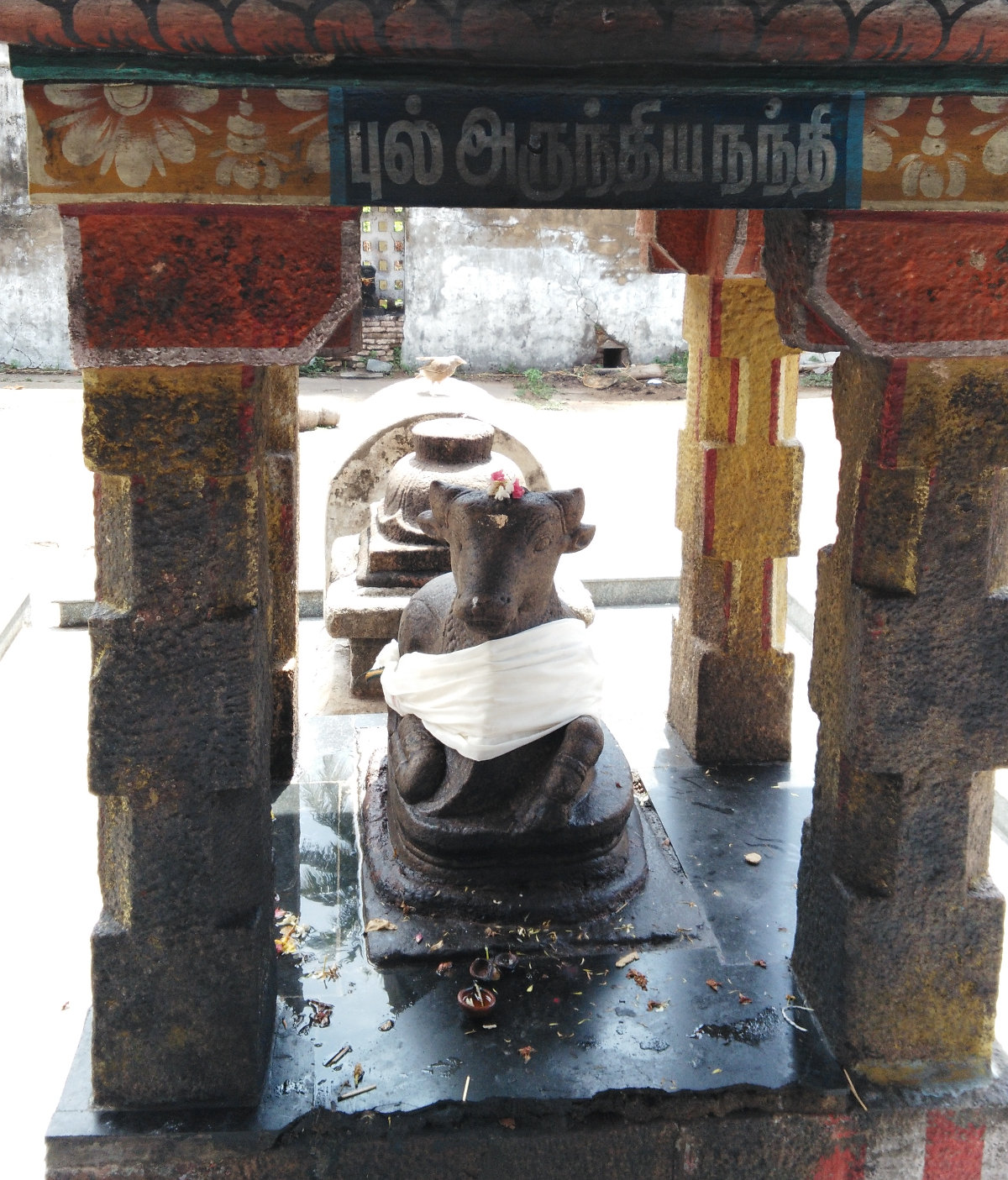 Devotees believe that worshipping Lord Shiva here will bless them with wealth and prosperity. Those seeking cure for mental disorder and diseases like anaemia can also worship Lord Shiva here.

This is a famous “parihara sthalam” for those suffering from the adverse effects of planet Sukran.

Some of the main festivals celebrated in this temple are-

Aadi Pooram in the Tamil month of Aadi (Jul-Aug),

Maasi Maham and Maha Shivrathri in the Tamil month of Masi (Feb-Mar),

Haradhathar festival in the Tamil month of Thai (Jan-Feb),

Navarathri in the Tamil month of Purattasi (Sept-Oct) and

Festivals for Anjaneyar are also celebrated in this temple. 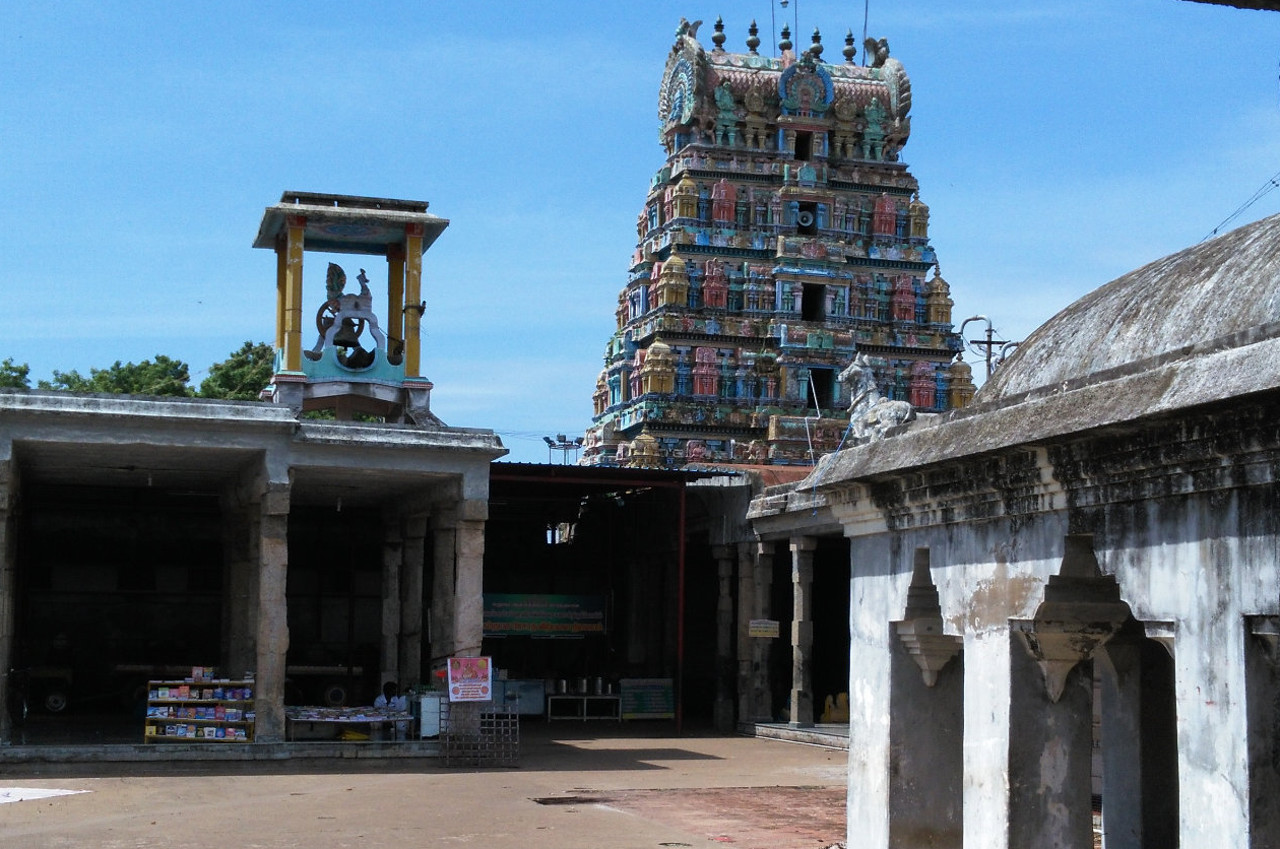