Kudanthai Kudamukku, now popularly known as Sri Kumbeswaraswamy temple, is situated in the heart of Kumbakonam town. It is on the Chidambaram to Tanjure via Mayiladuthurai route. It is about 35 kms from Mayiladuthurai. Kumbakonam has a railway station and this temple is about 2 kms away from the station.

Kumbakonam is situated on the banks of the river Cauvery. Cauvery and Arasalaru rivers flow in such a manner that they look like garlands adorning this place.

This temple has been in existence since the Chola times (7th century) and has been widely expanded by the Nayaks during the 15-17th century. 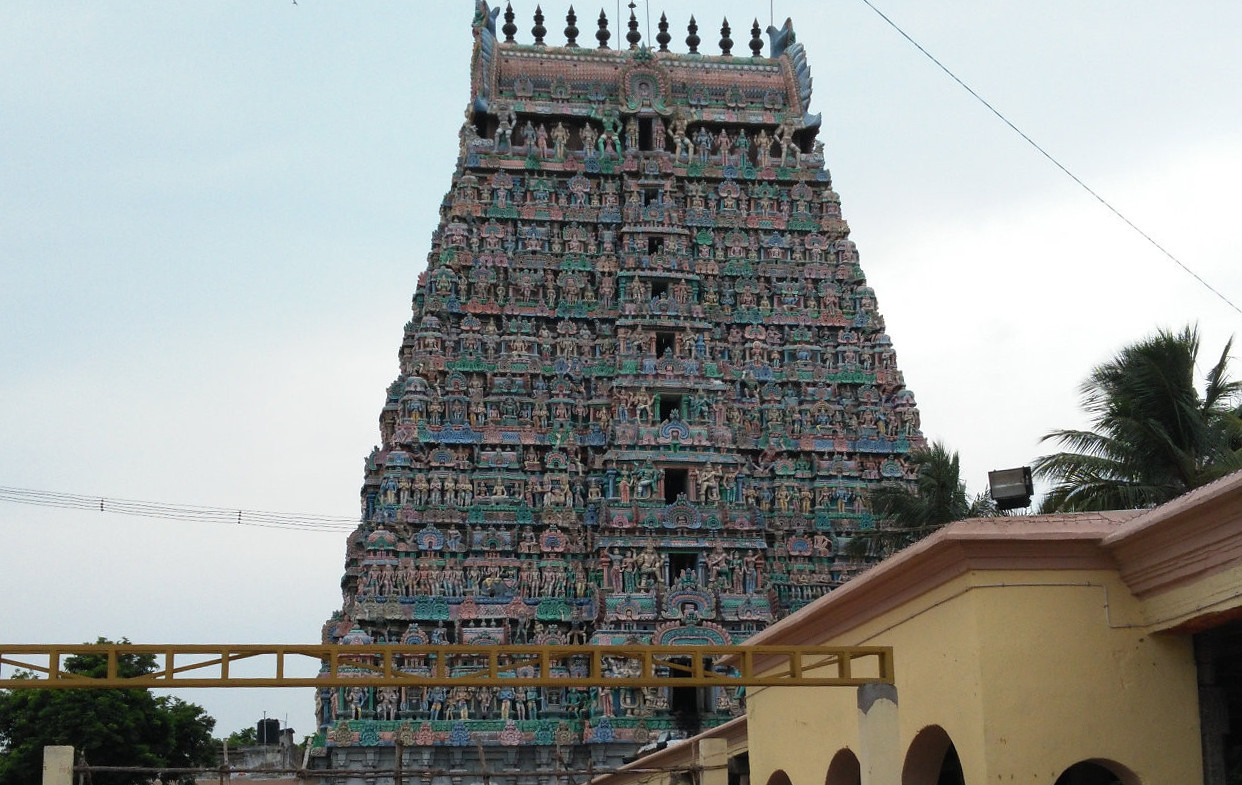 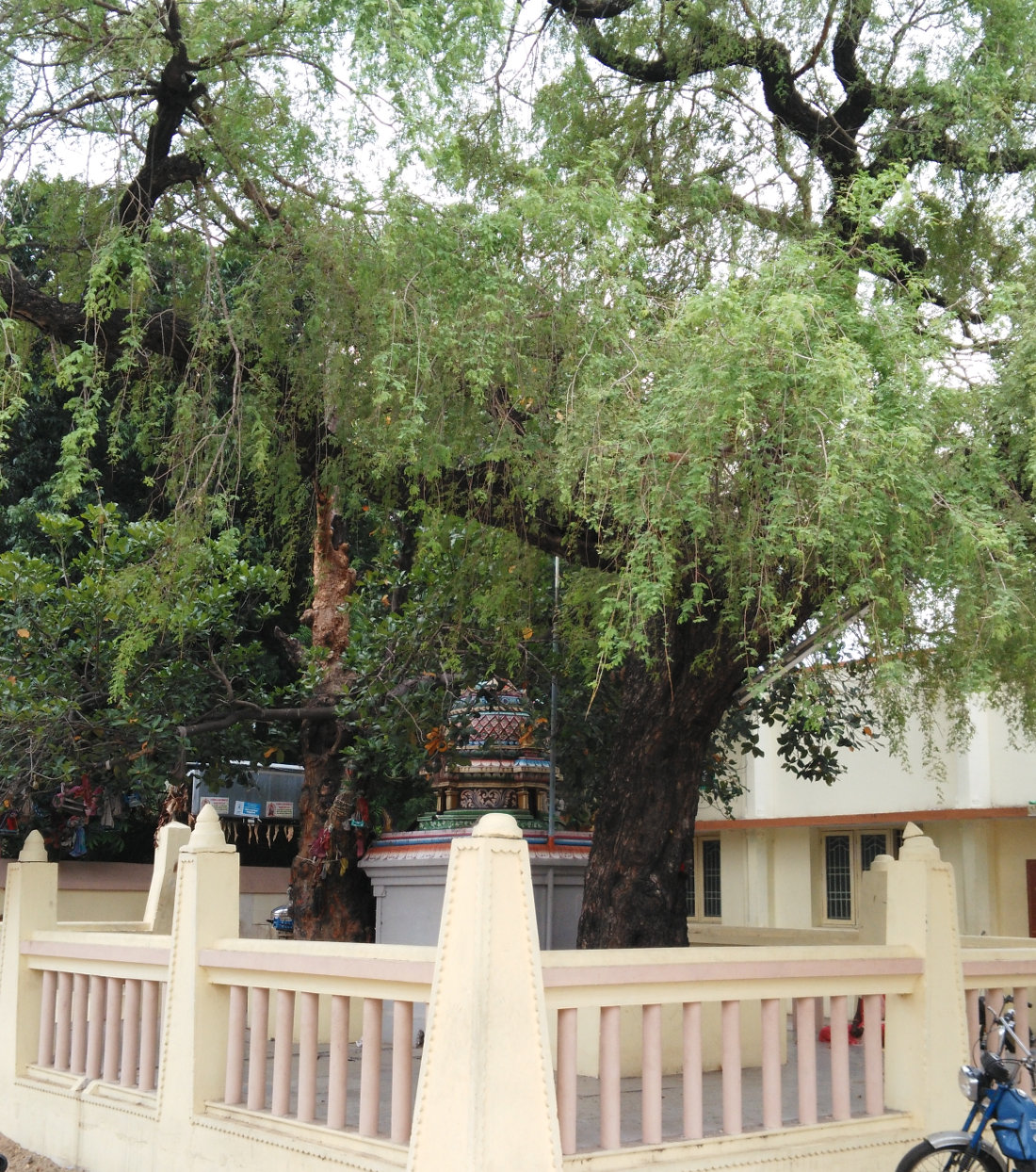 Simultaneously, 5 Vaishnava temples from Kumbakonam also participate in this festival. However, instead of their Theerthavaari in Mahaamaha tank, the Theerthavaari happens in the river Kaveri.

These Vaishnava temples are:

It is also believed that Lord Brahma, Indran, Kamadhenu, Sages Kasyaba and Hemarishi have worshiped the lord here. 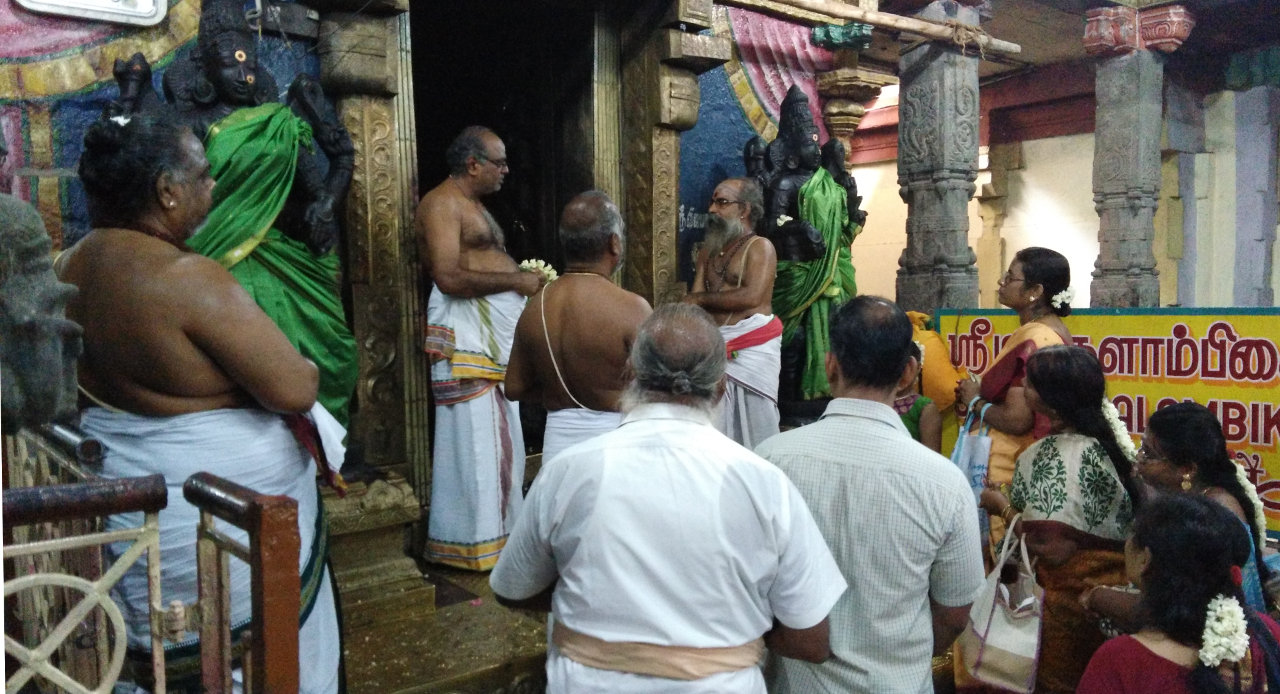 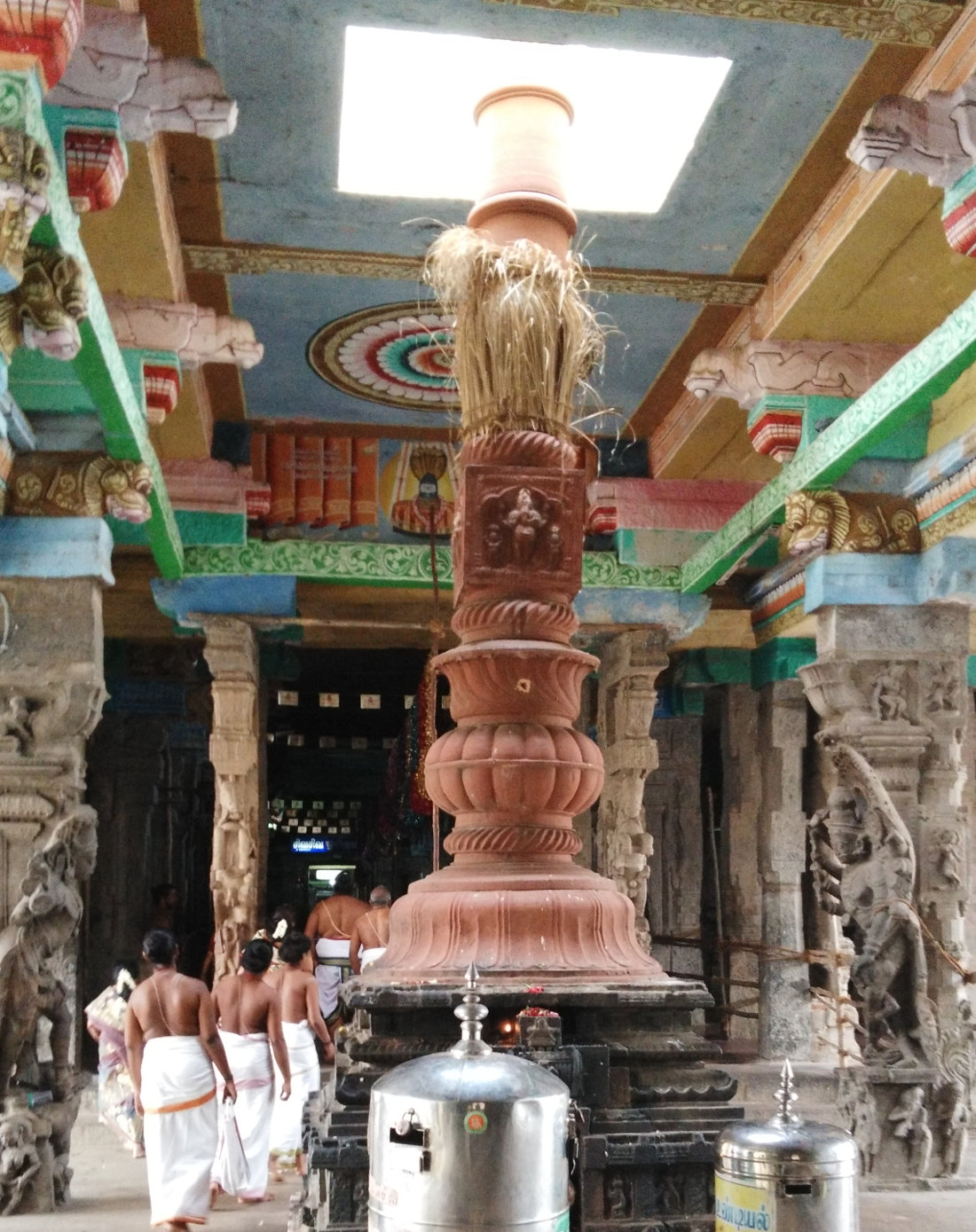 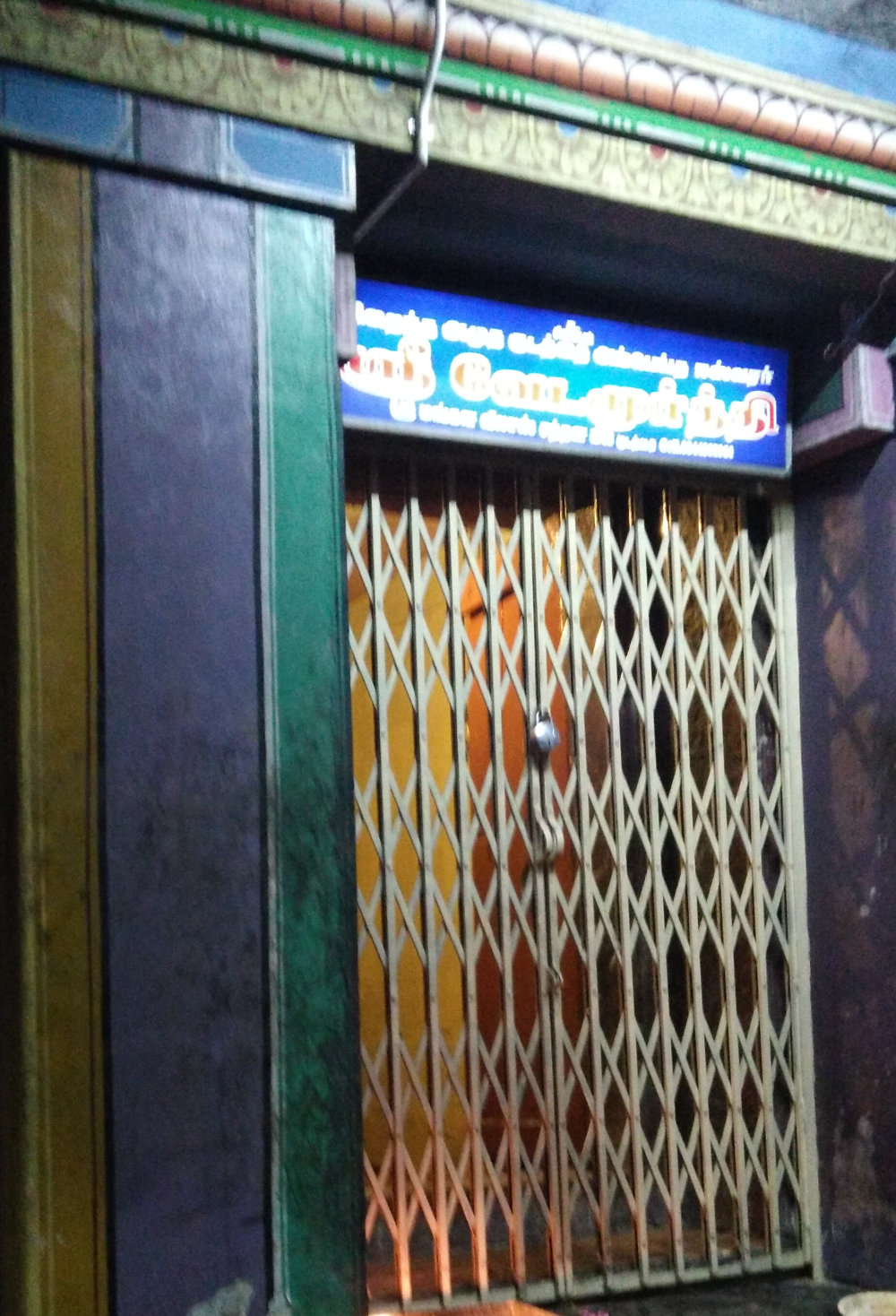 There is a separate shrine for Lord Kiratha Murthy (also known as “Veta” Murthy) here. This is unique to this temple as it commemorates the legend that Lord Shiva himself reinstated life back on earth.

Since the lingam is made of sand, the abhishekam is performed only to the base (Aavudayar). Only “Punugu” (civet) is applied to the lingam once in a while. The lingam is big in size (“Mahalingam”) and it is in an inclined position. It is always covered with gold sheets (“kavasam”).

Lord Murugan is called Karthikeyan here. The uniqueness of this lord’s idol is that he is seen with his consorts and his peacock mount. He is depicted with six faces but with only 6 hands instead of 12.

There is one unfinished main tower (Rajagopuram) here which is called “mottai gopuram”. This is a well-known land mark of the temple.

In this temple, there are many halls, the most notable one is the sixteen-pillared hall, also called the “Navarathiri Mandapam” (Hall of Navarathri celebration), built during the Vijayanagar period. This has all the 27 stars and 12 zodiac signs sculpted in a single stone.

Each and every tower, hall, pillar, relief, sculpture and idol here is very artistically made. There is a stone “Nagaswaram” (pipe instrument) which is quite unique. 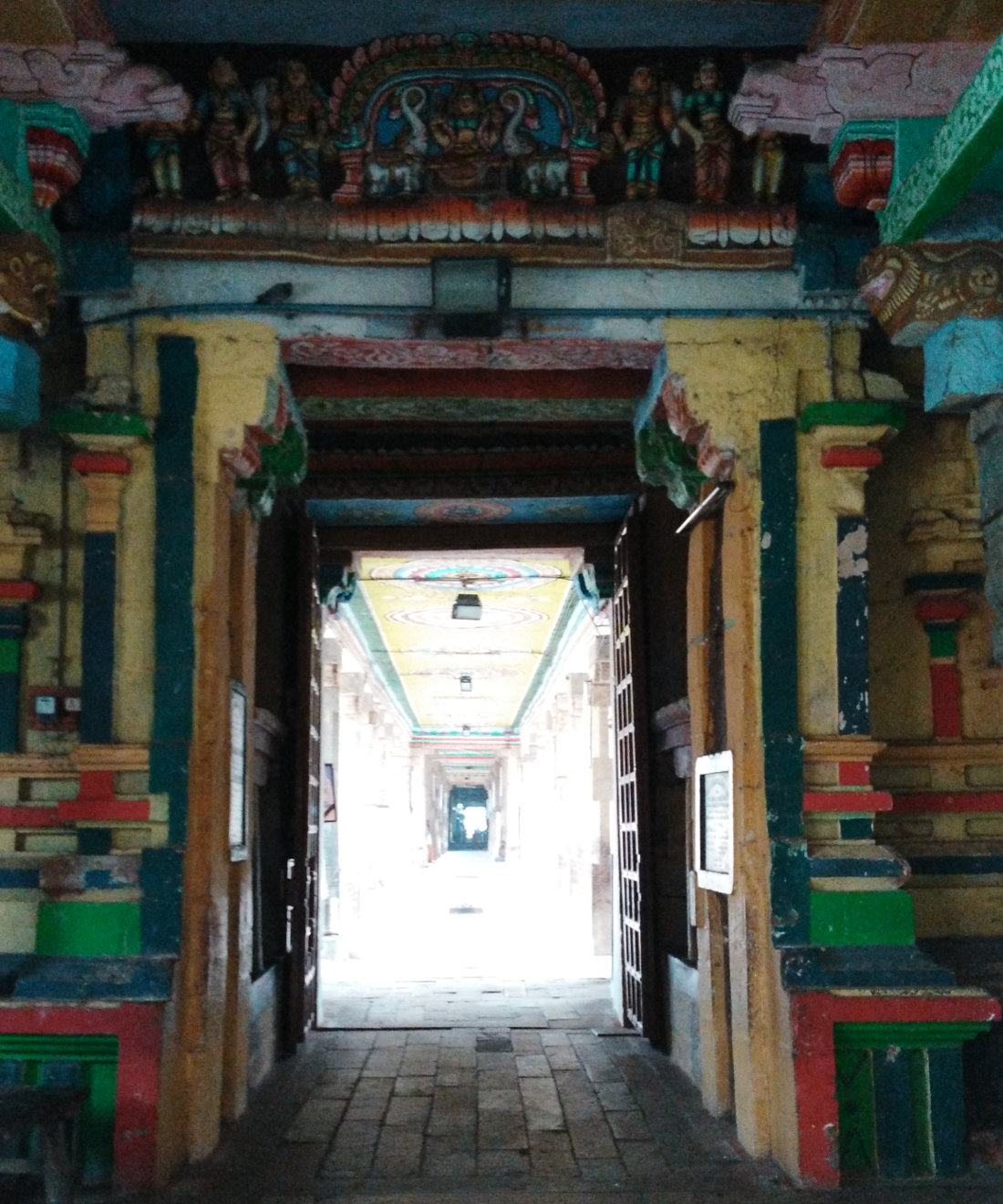 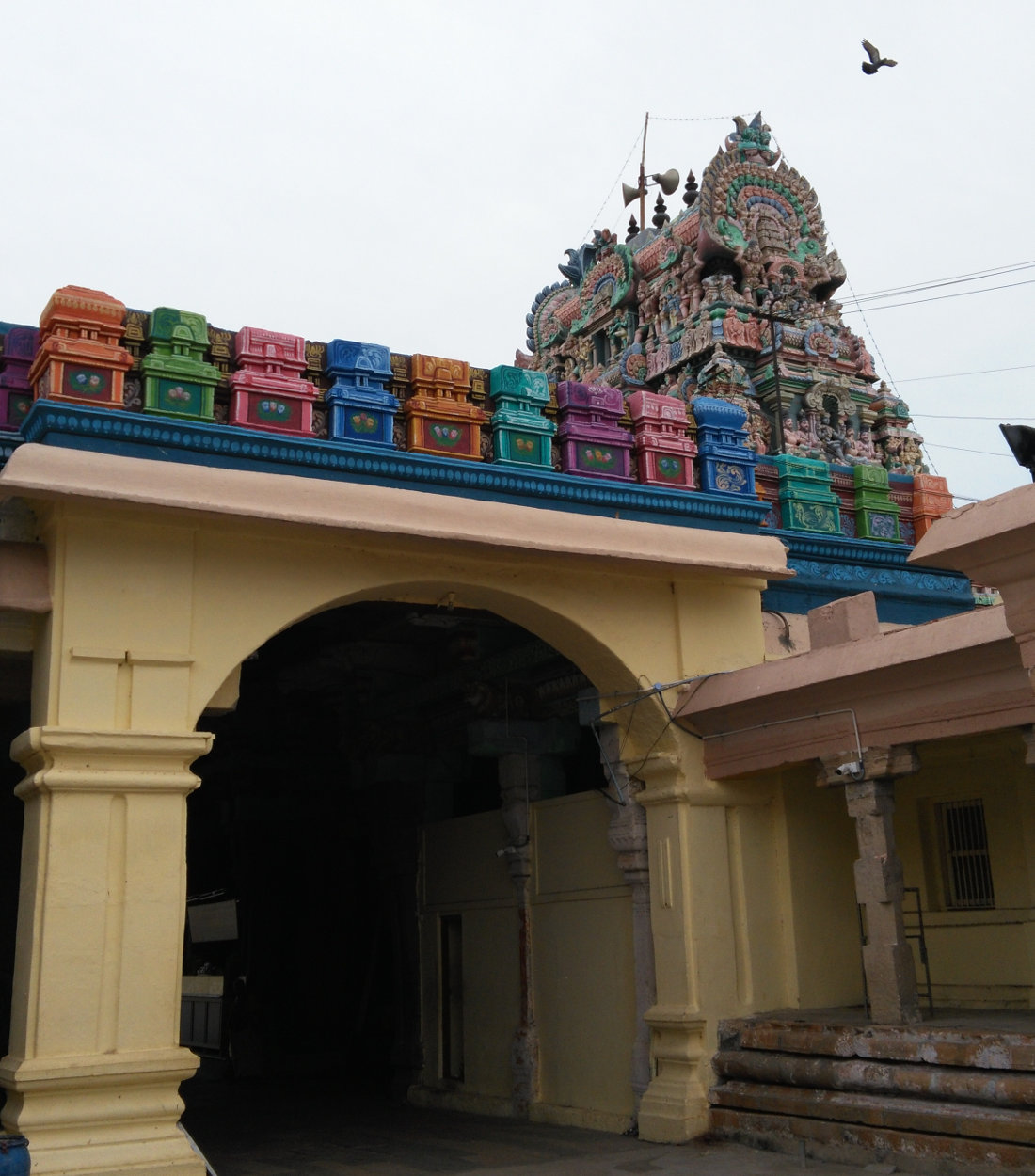 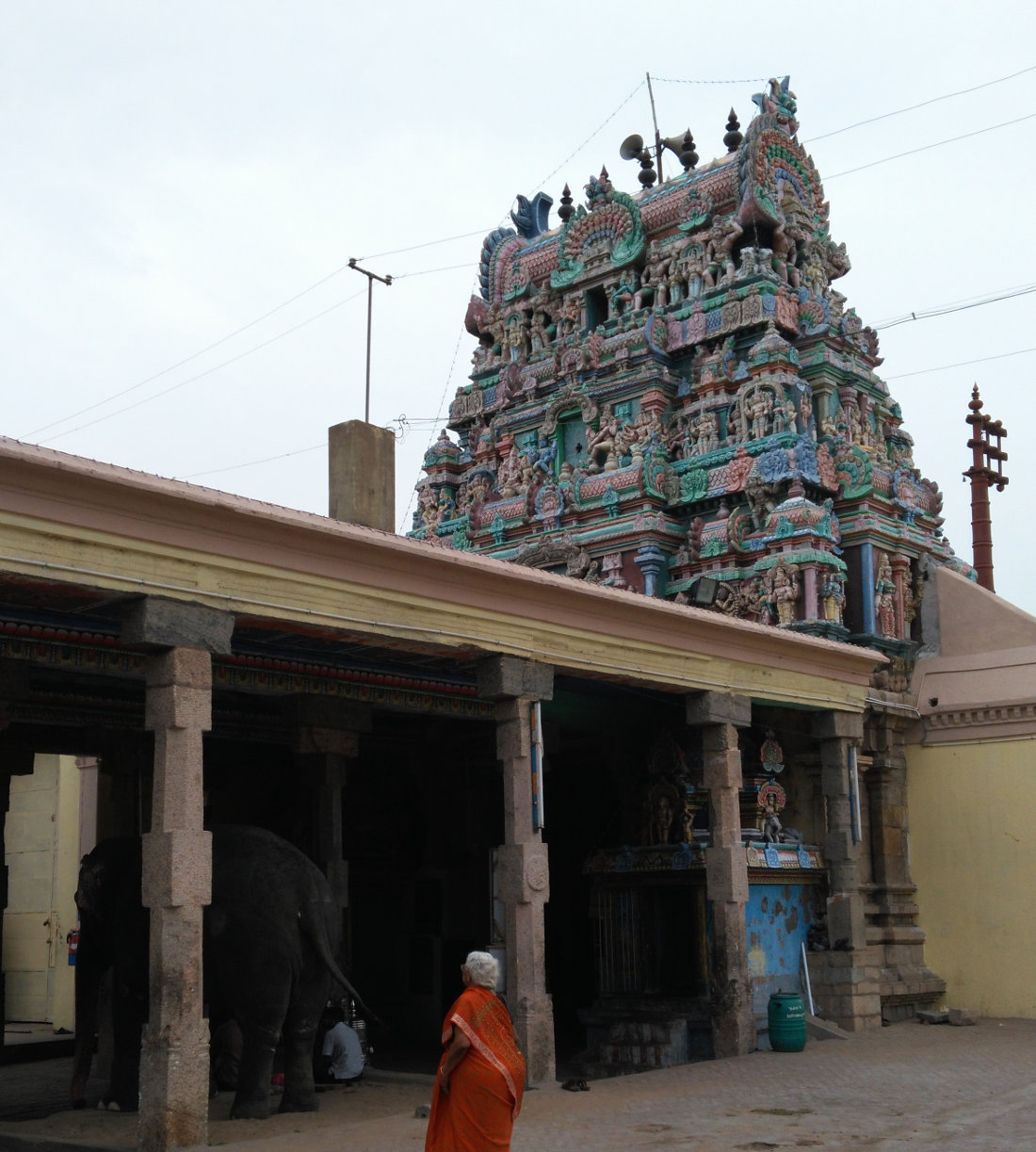 It is believed that there is no substitute for taking a dip here on the auspicious day of Maham (every year) and Mahamaham (once in 12 years) and worshipping the lord for absolution and relief from the sins of one’s previous birth.

Devotees pray to Goddess Mangalambikai for excellence in education and to seek the boons for early marriage and child birth (“Santhana Prapthi”).

Almost all festivals related to Lord Shiva are celebrated in this temple. 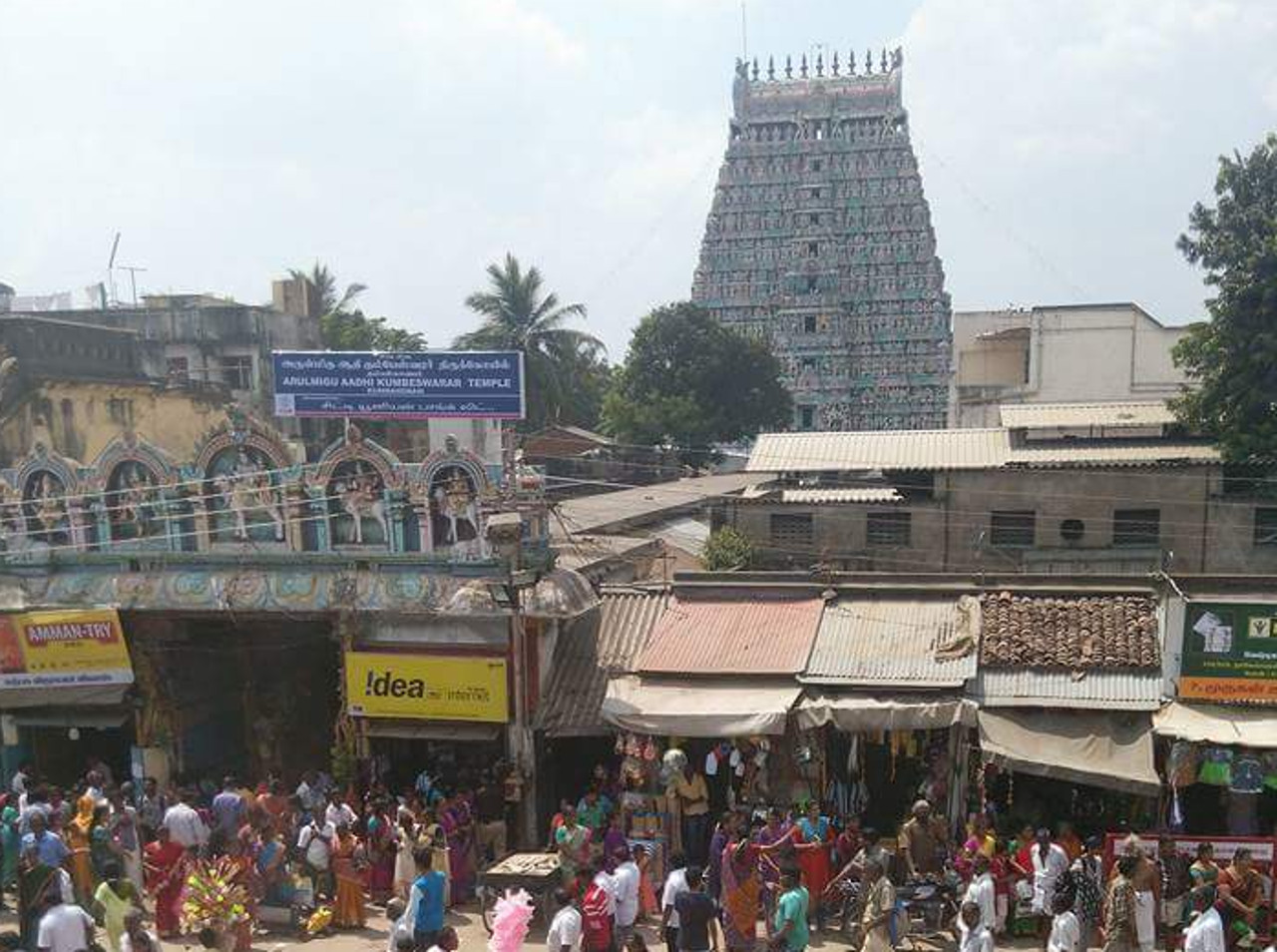 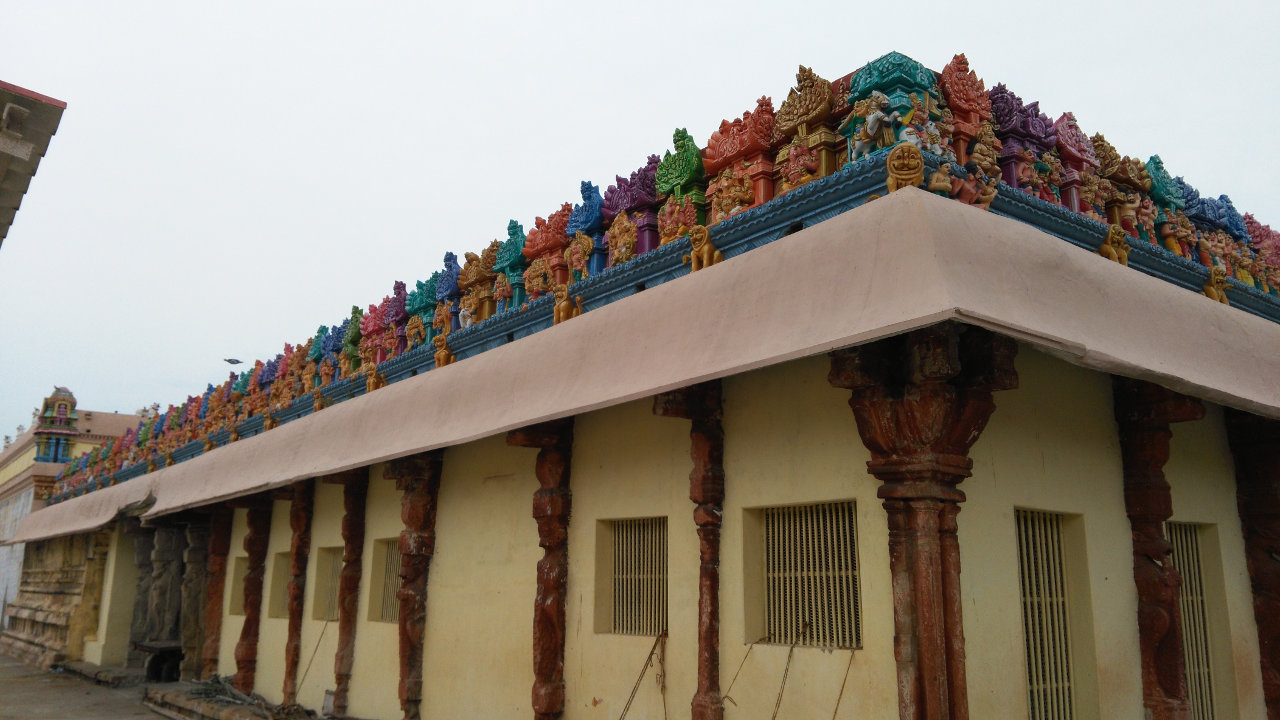 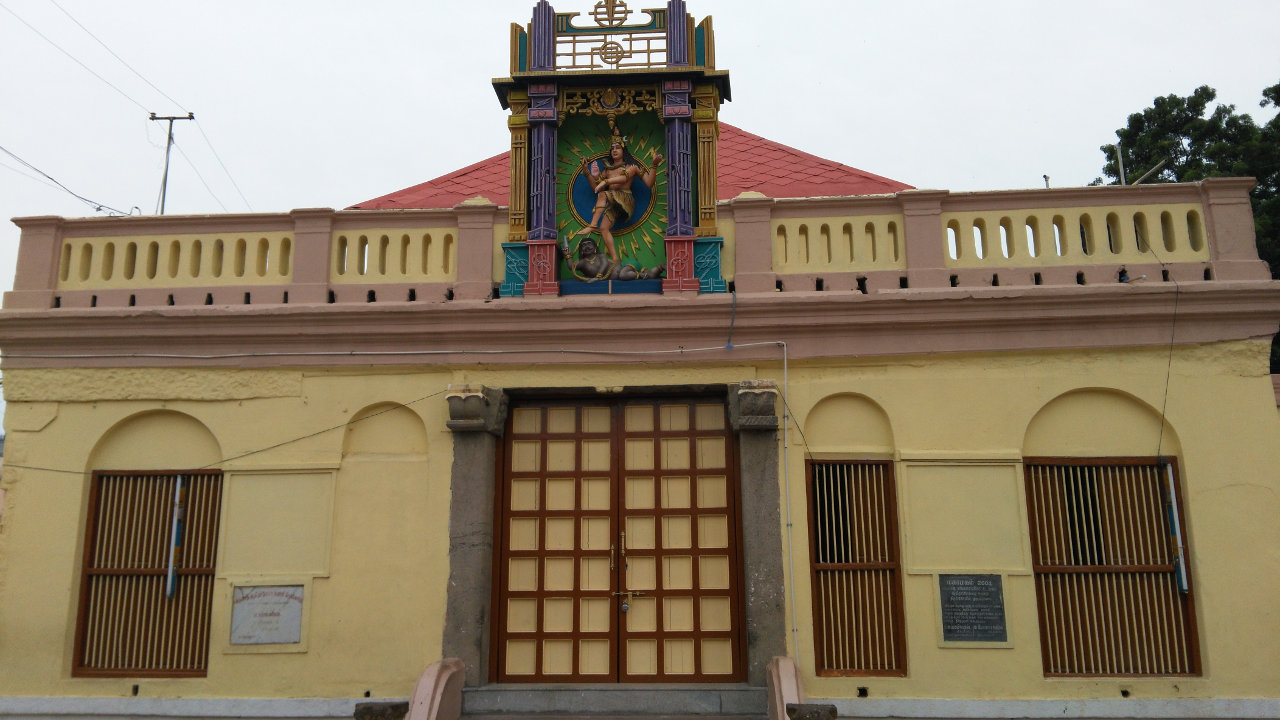 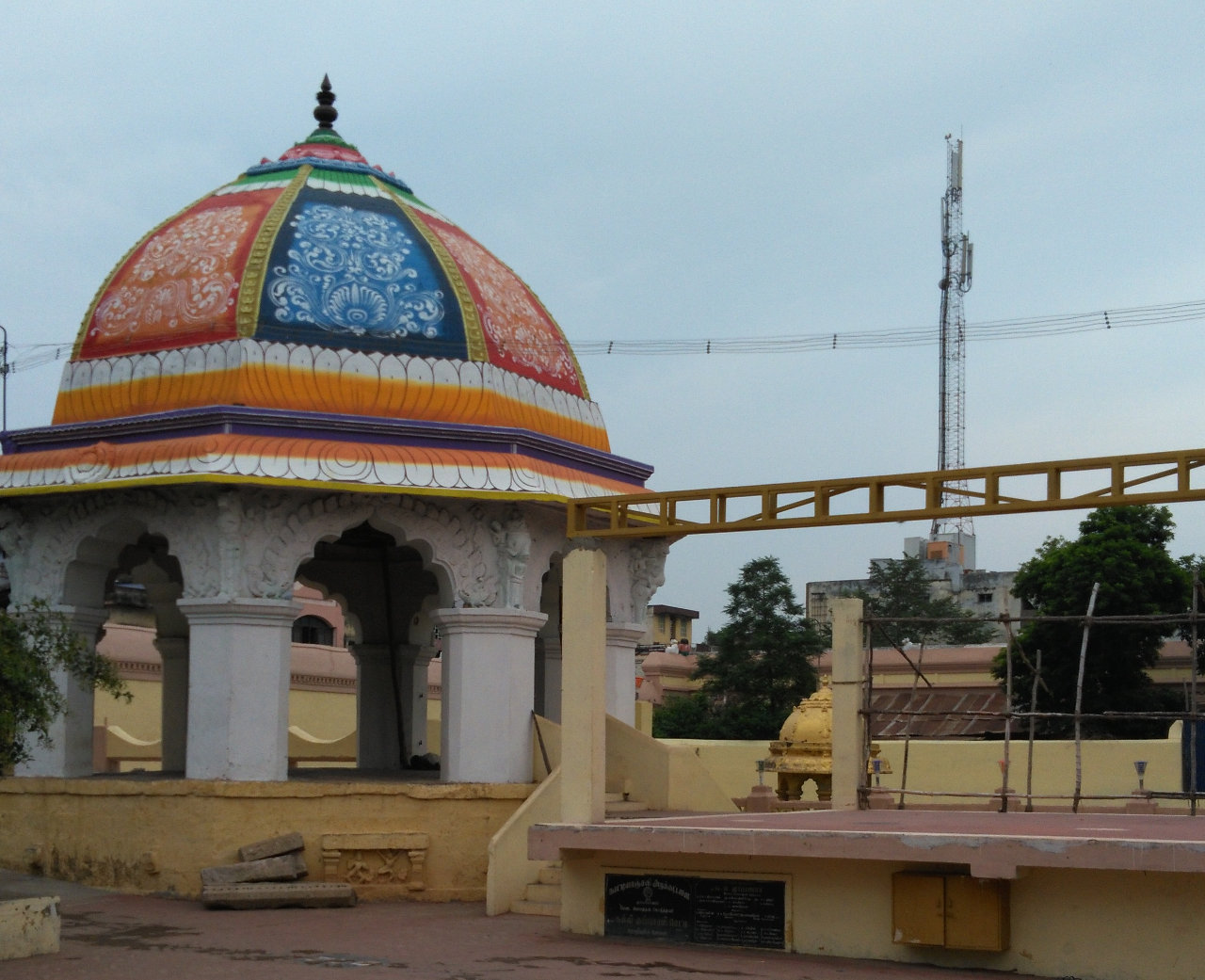 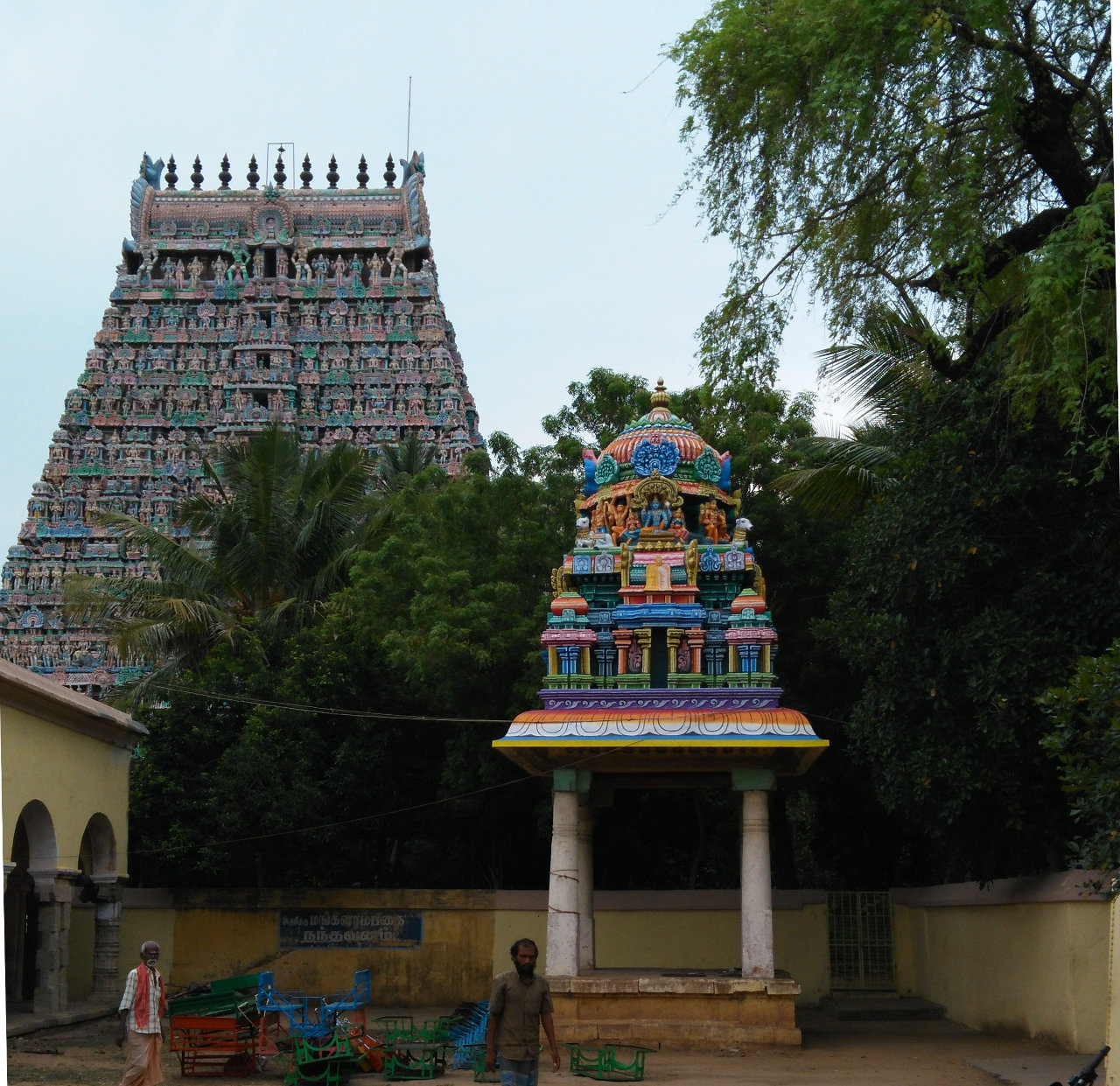