Thiruvamathur is located at a distance of about 8 kms from Villupuram on the Villupuram to Gingee route.

Thiruvamathur is located on the banks of the Pampa river, a tributary of the Pennai river. The historical names of this place are – Gomathrupuram, Gomatheeswaram and Gomathupuram.

The stone inscriptions also reveal that a Chola king sanctioned a grant that helped several blind students learn the devaram hymns and sing them in the temples. 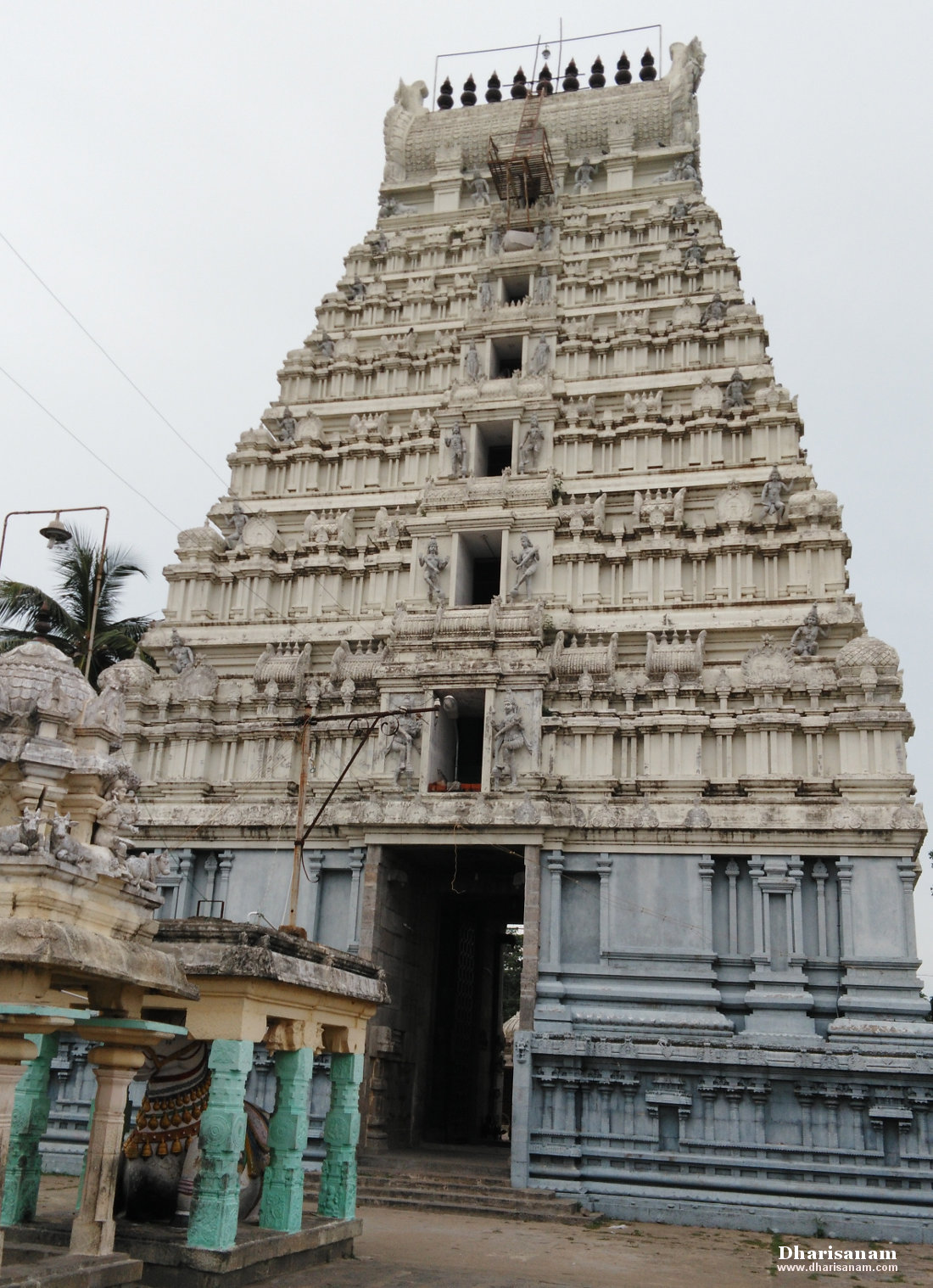 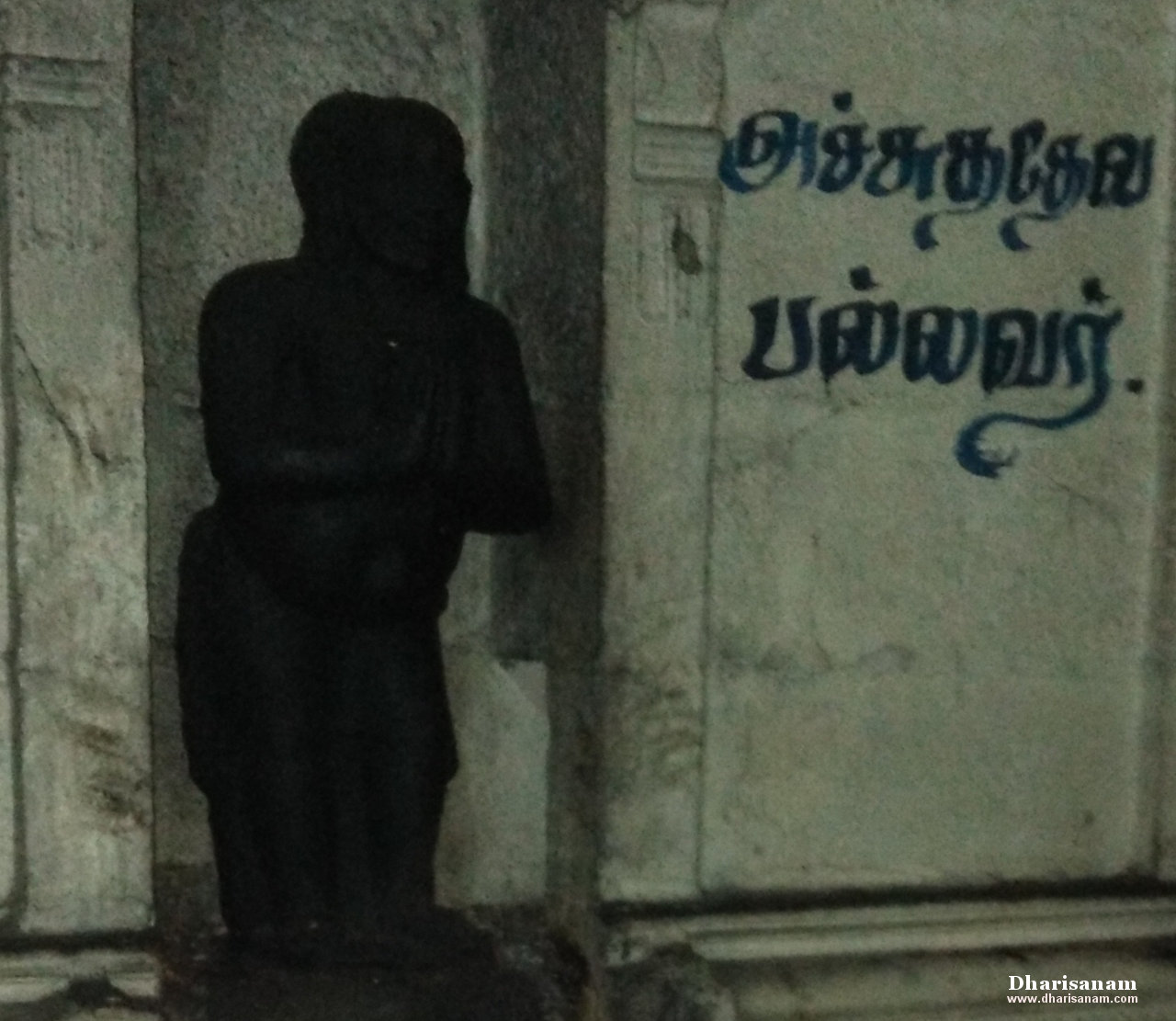 In ancient times this place was densely covered with Vanni trees. It is believed that at that time the cows did not have any horns and were frequently tormented by other wild animals. It is believed that the cows went to Nandhi (Lord Shiva’s bull mount) to seek protection. Nandhi advised them to come to this place and worship the lord. Nandhi, Kamadenu (the divine cow) and other cows came to this place and worshiped the lord. Pleased with their penance, Lord Shiva blessed them with horns to protect themselves. The name of this place “Thiru Amathur” is derived from “Thiru Aa Matha Vur” - “Aa” means cow, “Matha” means mother, “Vur” means village in Tamil and “Thiru” is a respectful prefix. For this reason, this place is revered as the “parental house” of cows.

According to Hindu mythology, all gods including Lords Shiva, Mahavishnu, Brahma, Goddess Parvathi, Lakshmi and Saraswathi and all Devars reside in the body of the cow. It is believed that the divine cow, Kamadenu along with other cows worshiped the main deity here by pouring their milk on the lingam. The marks of the cow’s hoof and rivulets due to the pouring of milk can be seen on the lingam.

There is a place inside Goddess Muthambikai’s temple called the “Thiruvattaparai”. There is a Shivalingam in Thiruvattaparai which is very famous. There is a small hall (Mandapam) called “Sathya Palakai” (literally translated as “a place to make promises”) in the southwest corner. According to legend, sitting at this spot, Lord Ram alongwith Hanuman entered into an alliance with Sukrivan to fight and kill Ravana. To cleanse himself of the sins accrued by killing Ravana, Lord Ram worshiped Lord Shiva here. There is a well inside this temple called “Dhanda Theertham” which is believed to have been created by Lord Ram.

The lord’s name “Sri Abhirameswarar” is derived from the believe that Lord Ram worshiped Lord Shiva here. “Abhi” means affectionately and “Eswarar” is a respectful way of referring Lord Shiva. In his hymn of this temple, Saint Thirunavukkarasar had mentioned about Lord Ram’s affection towards the lord of this temple.

Even today, people who have been wrongly accused of some crime come to the “Sathya Palakai” at the “Thiru Vattaparai” and make pledges of their innocence. It is strongly believed that if someone makes a false promise at this place, they will be severely punished by the Goddess. The legend is that Goddess Muthambikai once punished a man by having him bit by a snake because he had cheated his younger brother and made a false promise at this place. To signify this event, the tail portion of a snake adorns the Goddess’s chest. This can be seen during abishekam. 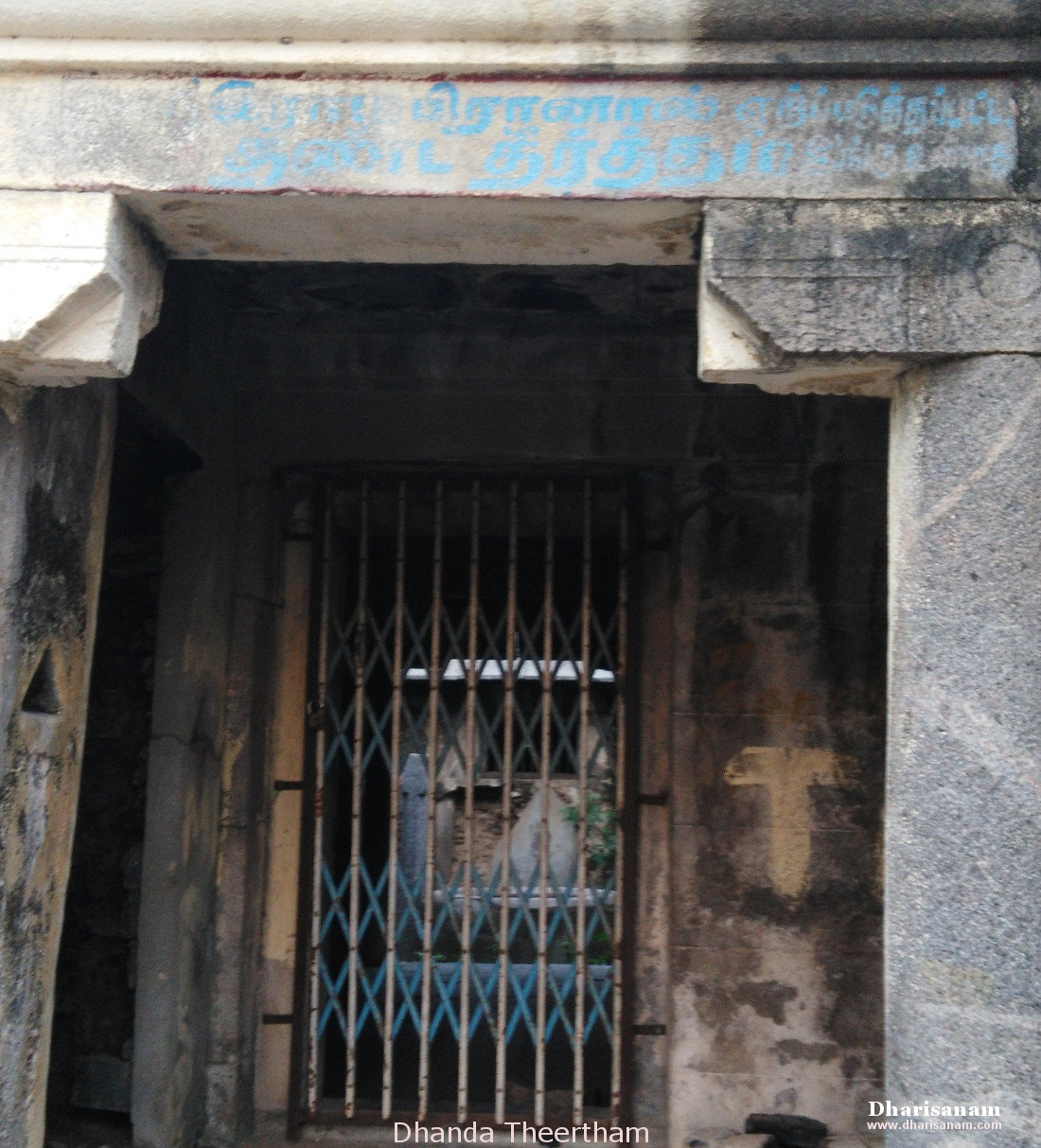 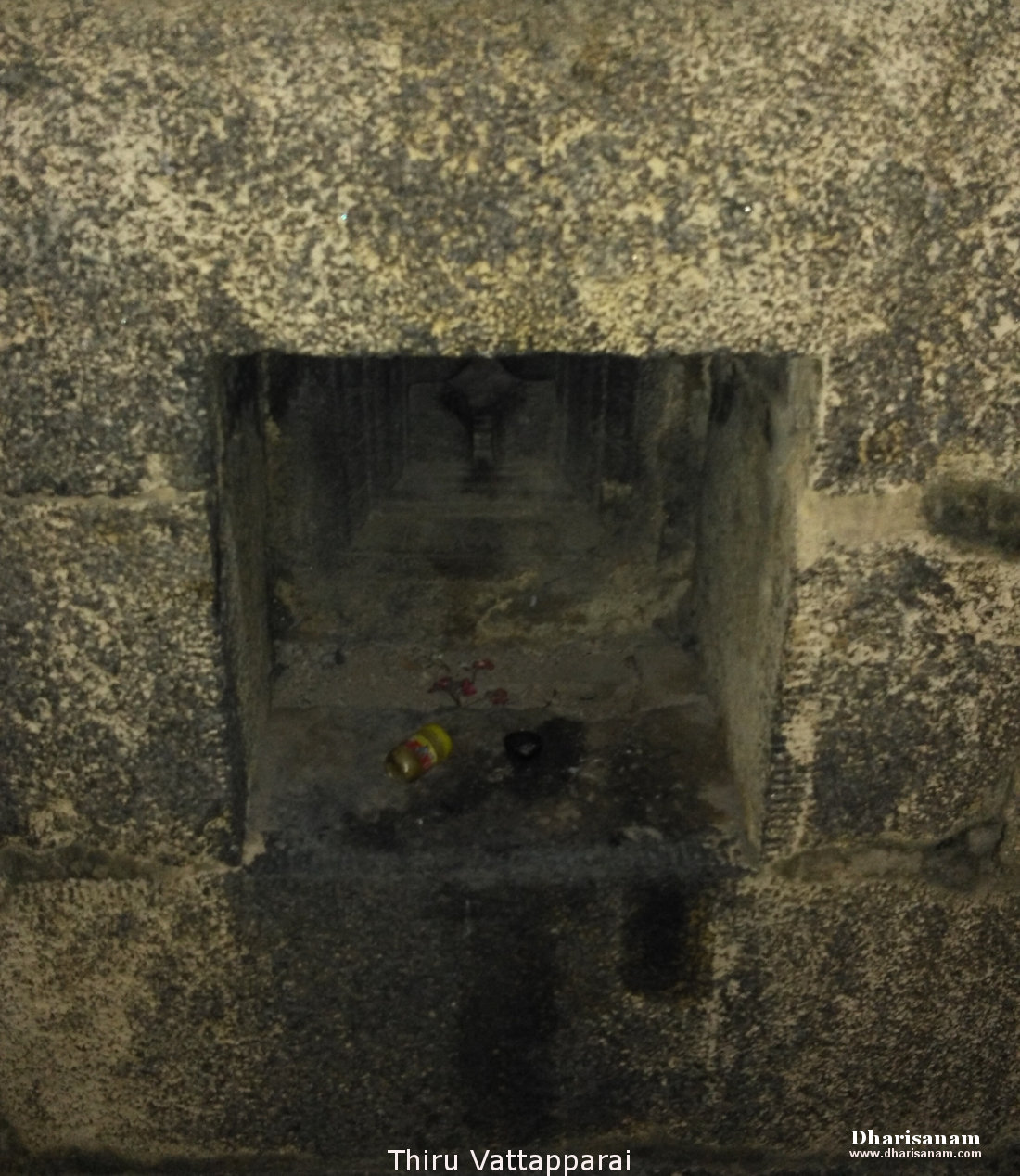 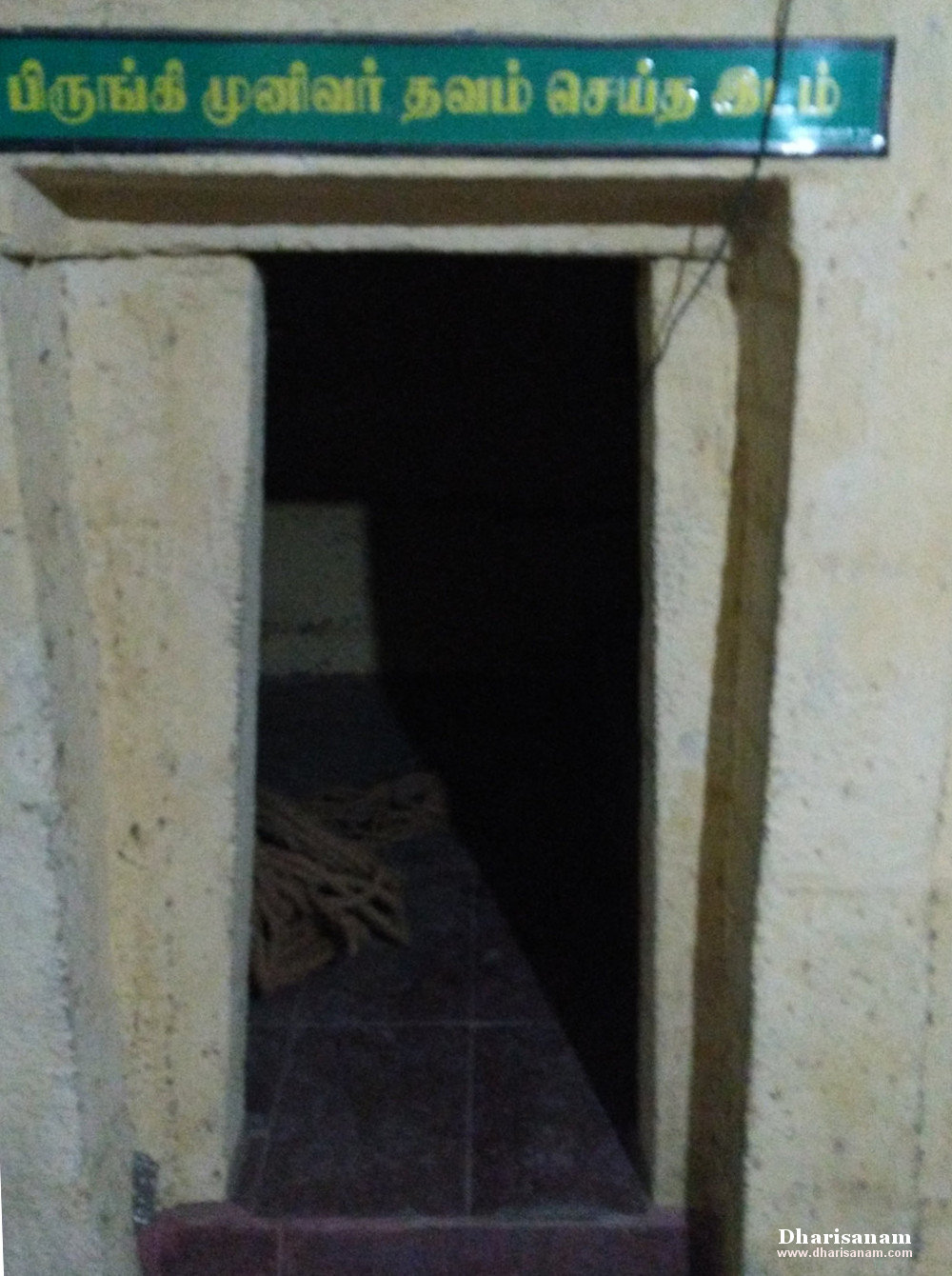 It is believed that once Sage Brungi Muni went to Kailash to worship Lord Shiva but found that the lord was with Goddess Parvathi. The sage was such an ardant devotee of Lord Shiva that he refused to worship anyone else. So, he took the form of a fly and went around Lord Shiva and worshiped him. When Goddess Parvathi came to know that the sage had ignored her, she cursed him. Her curse turned the sage into a tree. The sage realized his mistake and worshiped both of them and sought pardon. It is believed that he performed penance in this temple and got absolution. The Vanni tree, which is the sacred tree of this temple, signifies the fact that sage Brungi was turned into a tree by Goddess Parvathy’s curse.

It is also believed that Lord Murugan worshiped Lord Shiva and Goddess Parvathi here and was blessed with the “Vel” (spear) before going to fight with demon Surapadman.

Another legend associated with this temple is that of poets Ilam Surya and Mudu Surya (Ilam means junior and Mudu means senior in Tamil). One of them was blind and the other was lame. They travelled from one town to another singing the glory of Lord Shiva. While singing about the lord of this temple, “Thiruvamathur Kalambakam”, they made a small mistake – they said that this temple is on the western side of the river Pampa although it is on the eastern side. Some of the people who had assembled in the temple started teasing them. The lord came to their rescue and caused a heavy downpour. It rained so much that the river changed its course overnight. When the people reassembled the temple the next day, there was no need for the poets to correct their verse – the temple was now on the western side of the river.

Lord Shiva, a Swayambumurthy, is facing east and Goddess Muthambikai is facing west. There is a “Sri Chakra” in the goddess’s shrine is believed to have been installed by Sri Adi Sankara. 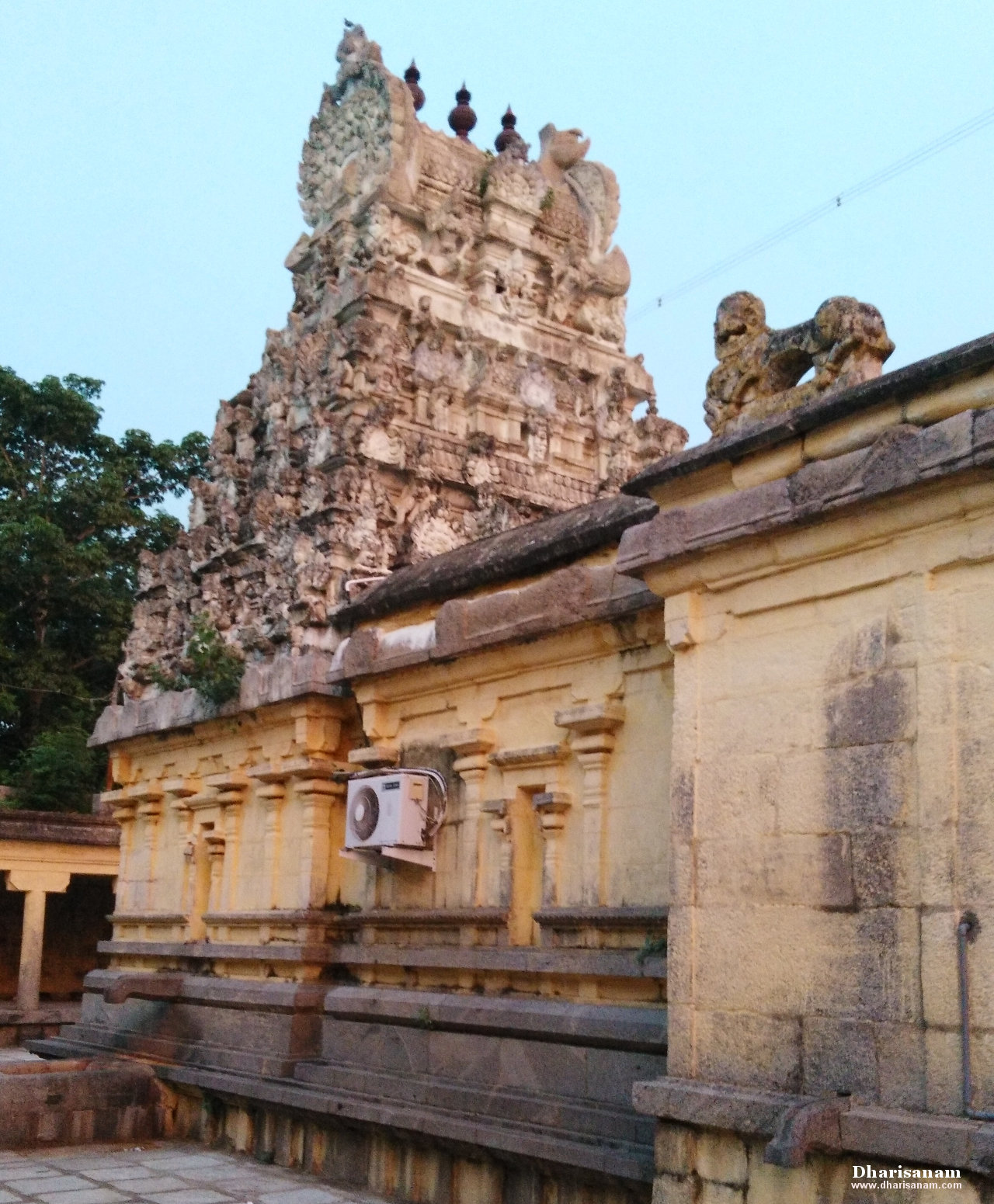 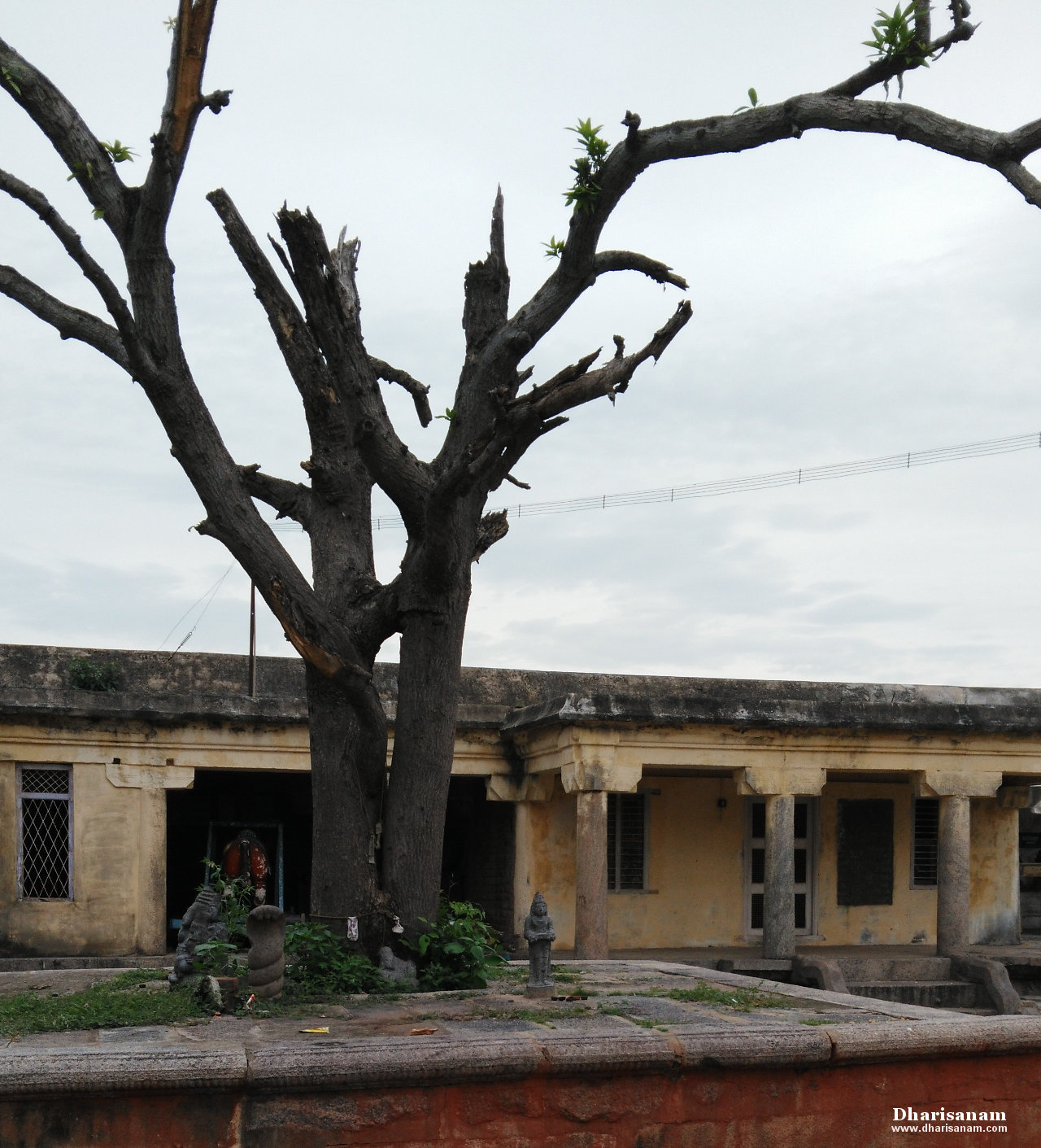 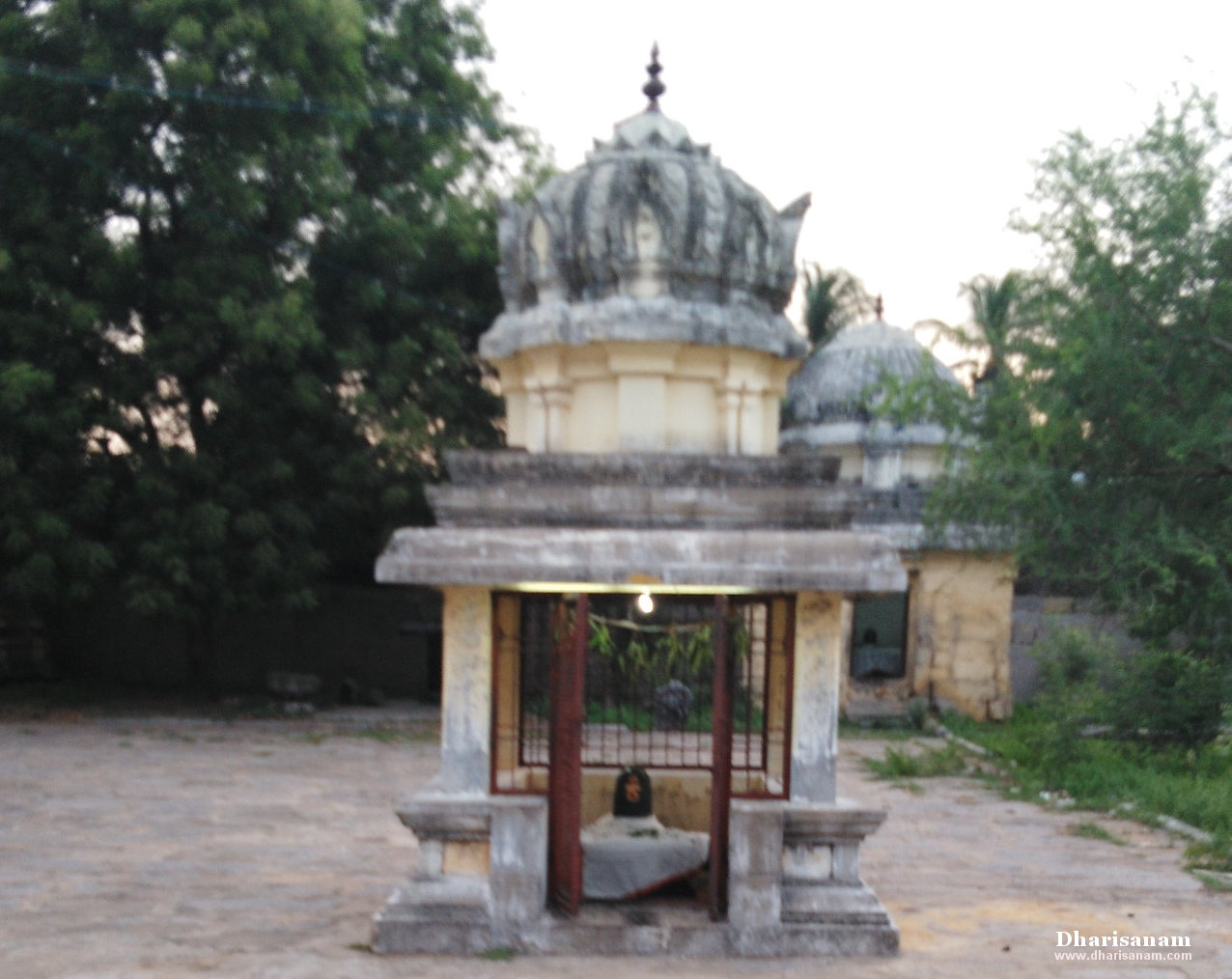 This temple is considered to be significant for its three important attributes – Murthy, Sthalam and Theertham - glory of Lord, sacredness of the land and the auspicious temple tank.

There are beautiful reliefs of Lords Brahma, Vishnu and Shiva on one stone, “Shiva Pujai Vinayakar” on another stone and Lord Ram, Sita and Hanuman on another single stone.

The idol of Nandhi is housed inside a pit. This pit is filled with water during periods of drought in the hope that it will bring rain. 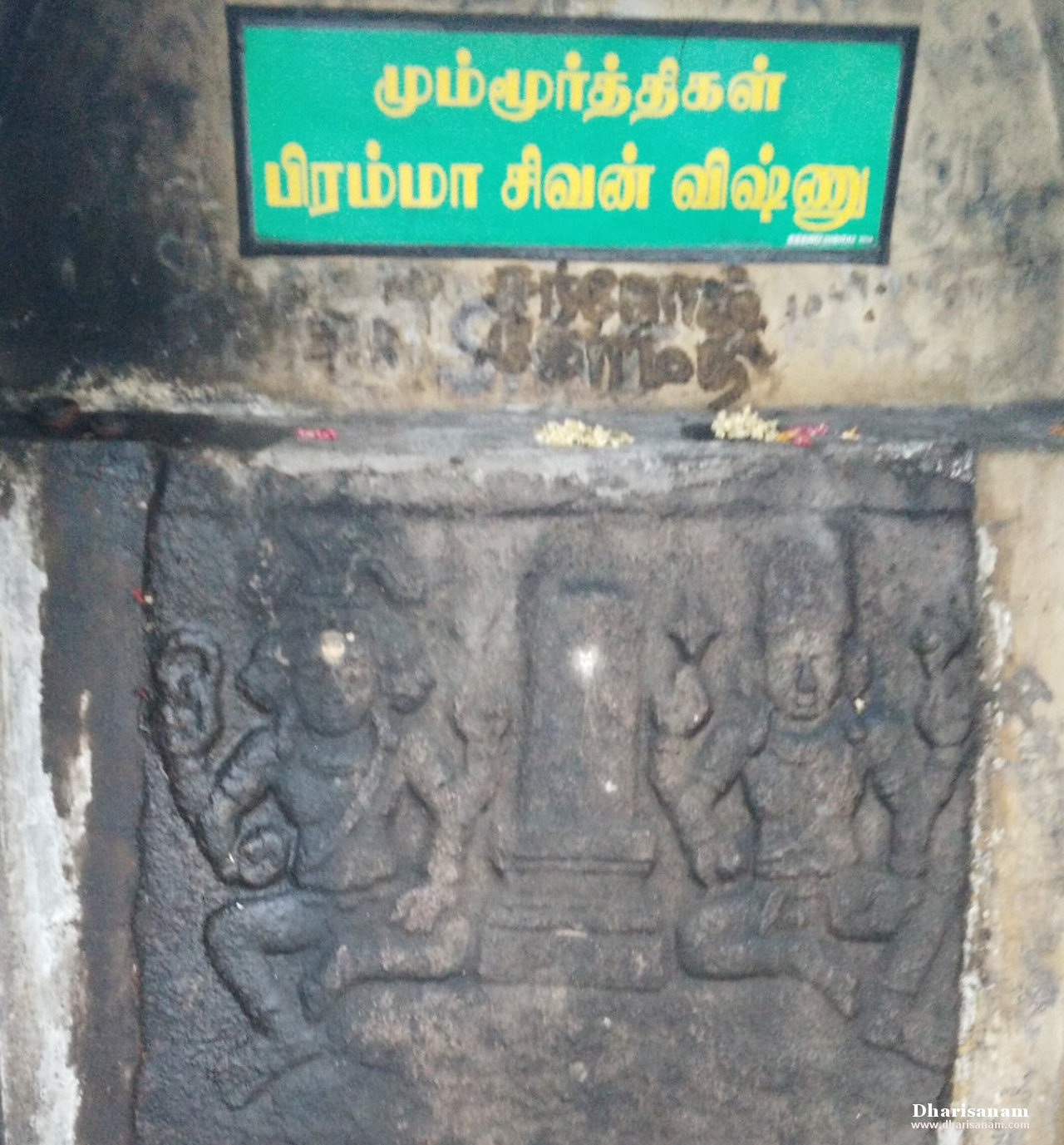 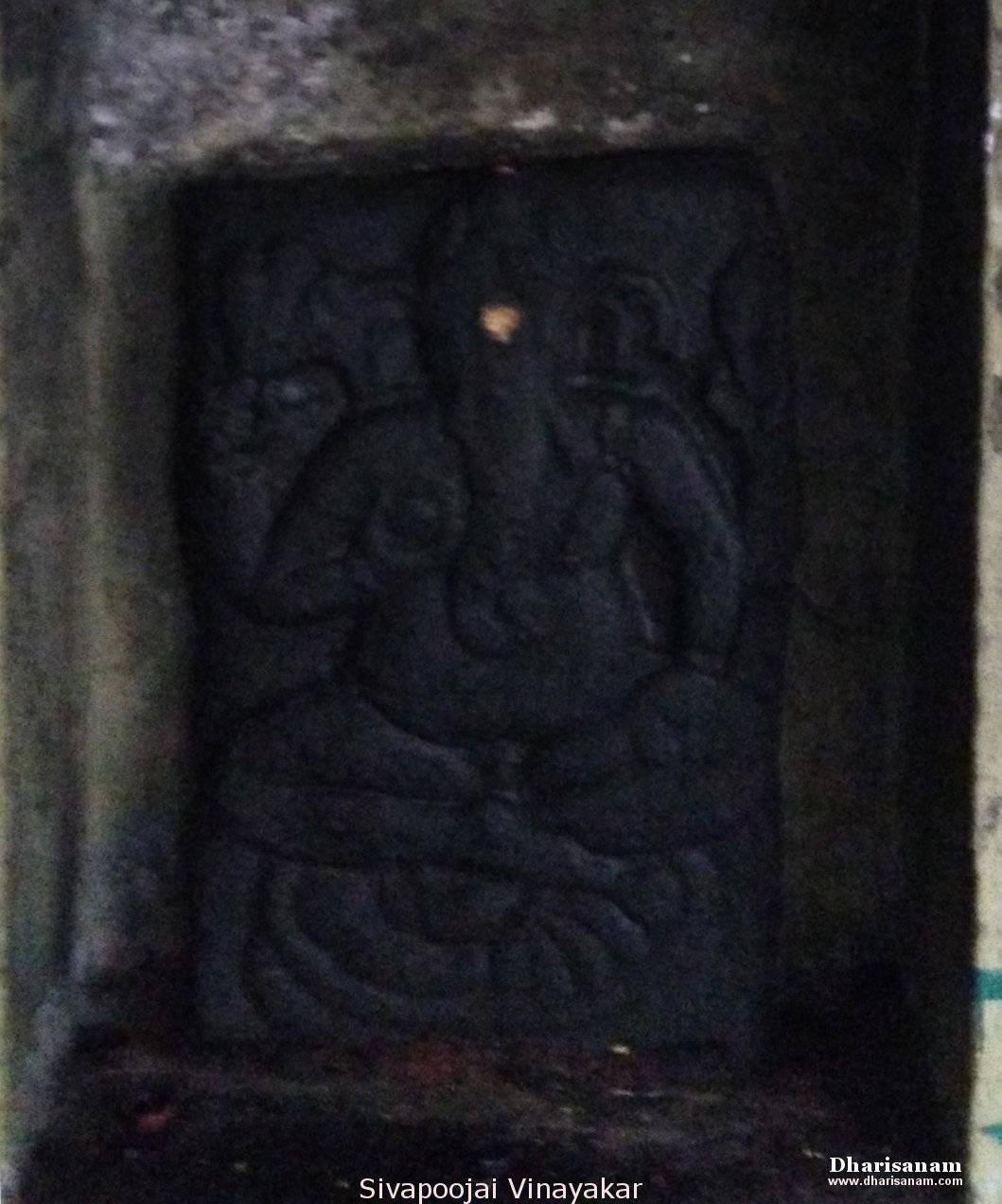 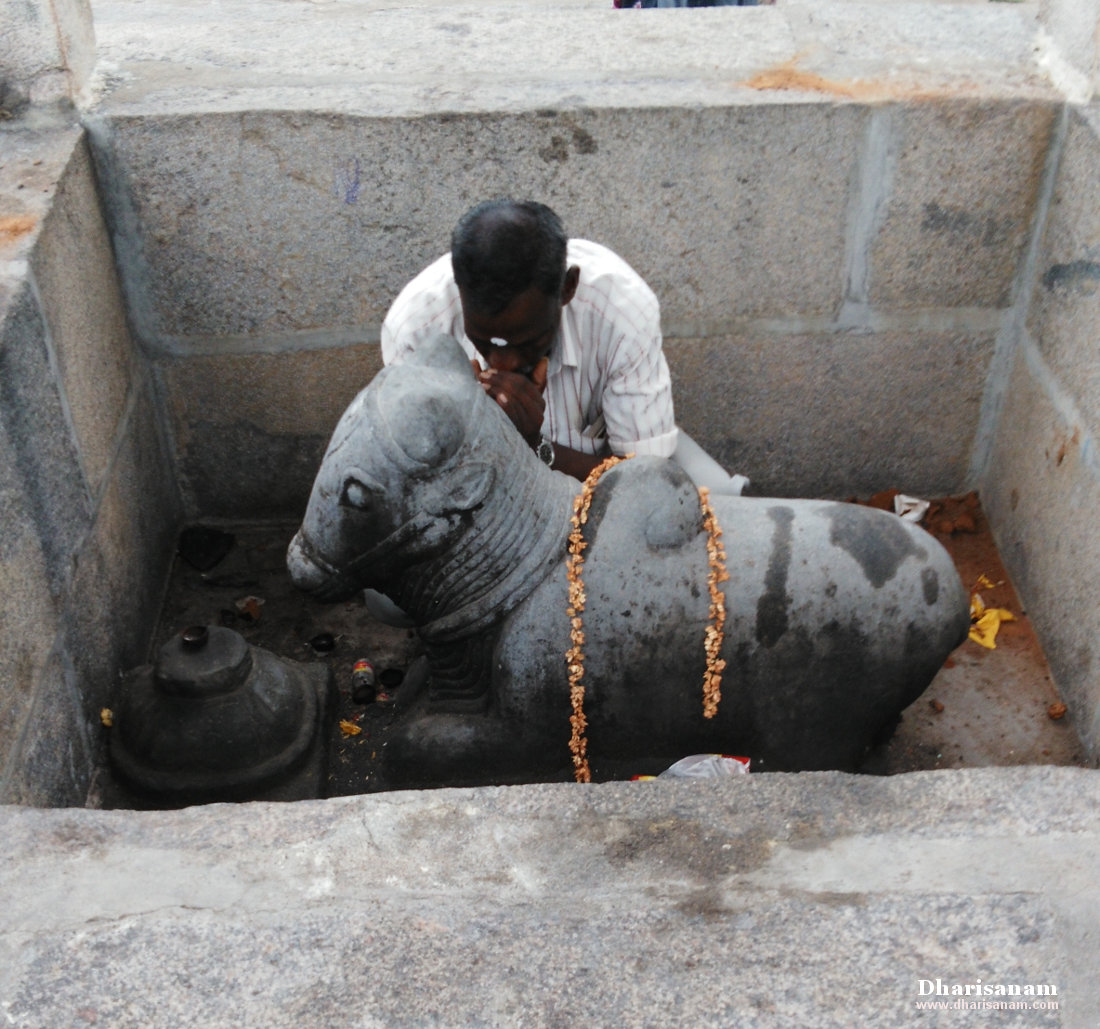 The famous poet Vannacharabam Sri Dandapani Swamigal (1839-1898), although born in Thirunelveli, spent the later part of his life in this place. He was a strict follower of the principles of Ahimsa and a staunch devotee of Lord Murugan. He visited many temples in the entire Tamil region, including Sri Lanka. He visited about 222 temples and rendered his songs. His contribution is as valuable as that of the Devara Moovars and Saint Arunagirinathar. He also wrote the “Thiruvamathur Sthalapuranam”.

He set up a mutt, “Kaumara Mutt” here and spent most of his time in spreading the glory of Lord Murugan. This Kaumara Mutt is said to be the first Kaumara Mutt in the world. He is considered to be the reincarnation of Saint Arunagirininathar. It is believed that in his lifetime he wrote about one lakh poems. His final resting place (“Samathi”) can be seen inside the mutt.

The shrines of Lord Shiva and the Goddess Parvathi are on either side of the road and are facing each other. There is a hole in the compound walls of the two temples through which the lord and goddess can see each other. Couples come to this place and worship the lord in the hope that marital discord will be removed and their relationships will improve.

People pray to Goddess Muthambikai for removal of obstacles in their marriage proposals. Those seeking “santhana prapthi” (child boon) can pray to the Goddess here.

10-day Brahmotsavam in the Tamil month of Panguni (Mar-Apr) is an important festival celebrated here.

Shivrathri in the Tamil month of Masi (Feb-Mar), 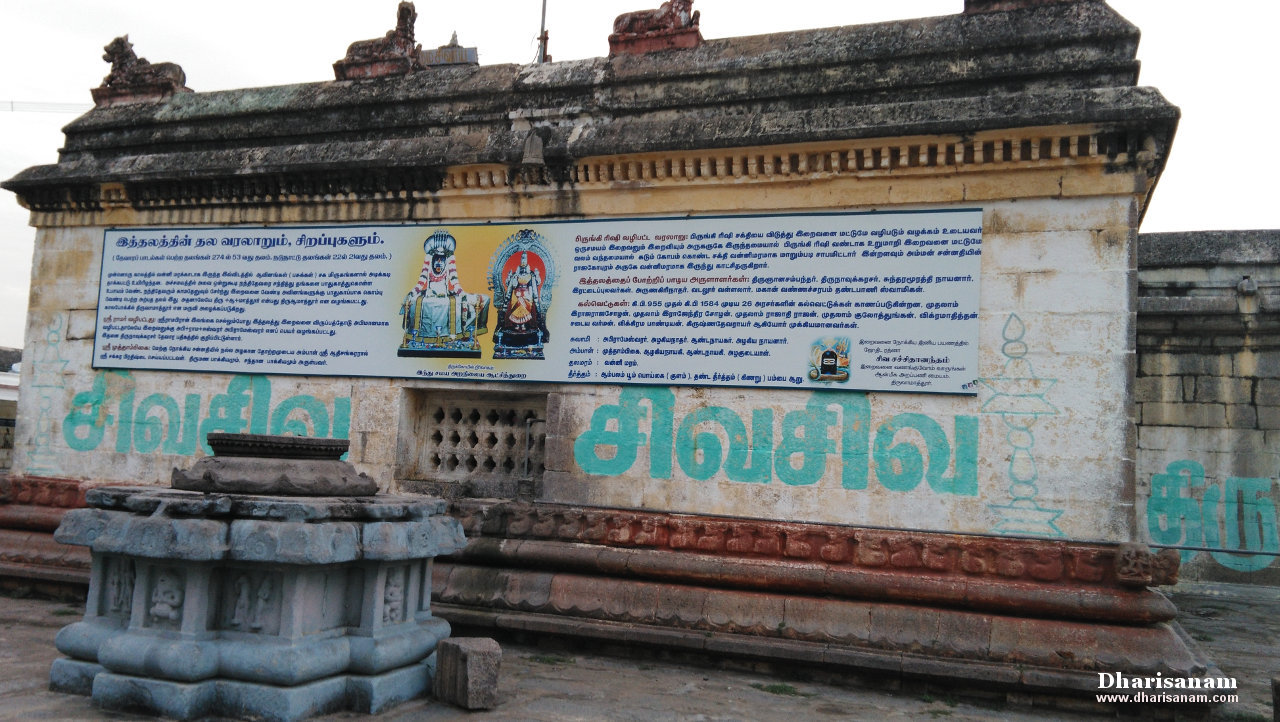 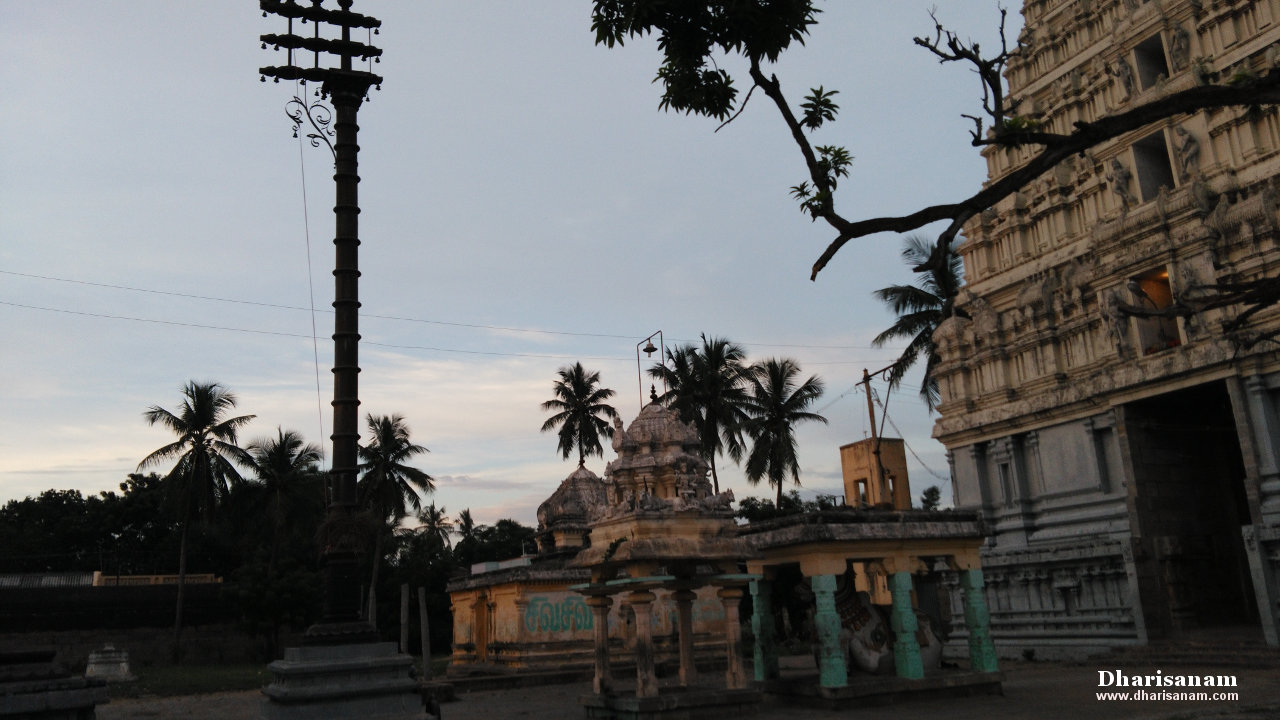 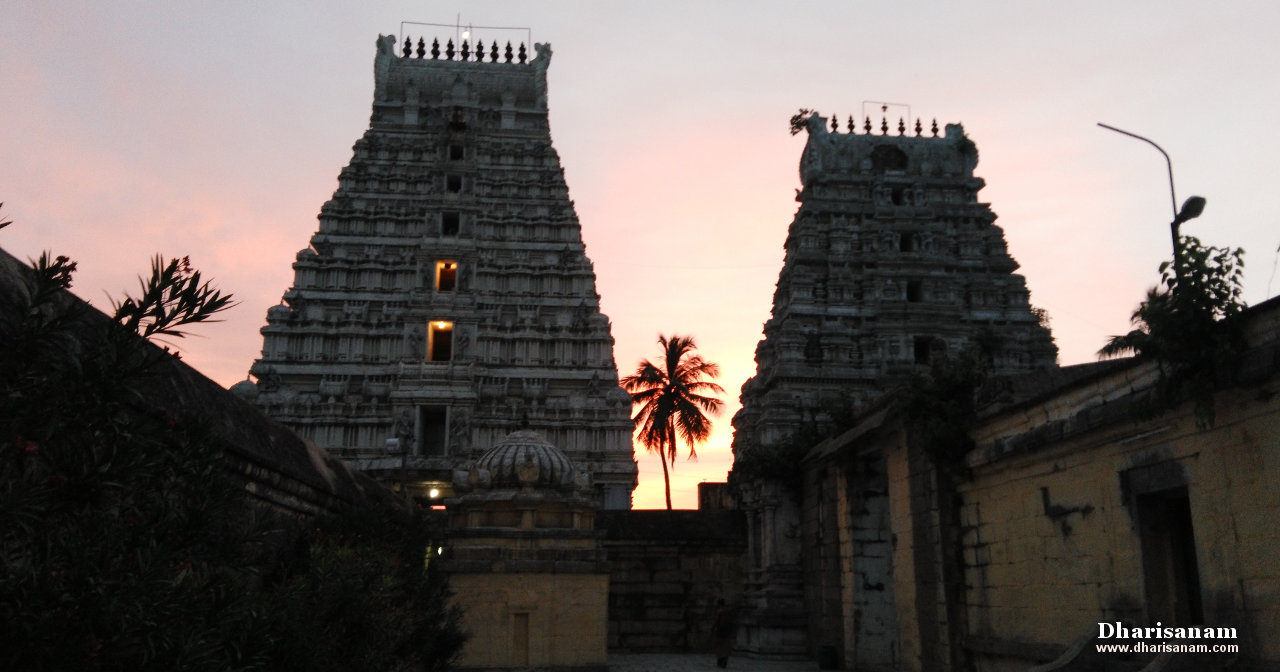