According to legend, in ancient times, this region was densely covered with “Poolai” plants. However, now there is not even a single plant left here.

As the sacred tree (Sthala Viruksham) of this temple is the black poolai plant, this place gets the name Thiru Irumpoolai.

The temple is surrounded by “Amirtha Pushkarani”, one of its Theerthams. It adorns the temple like a garland (“Akazhi” in Tamil). 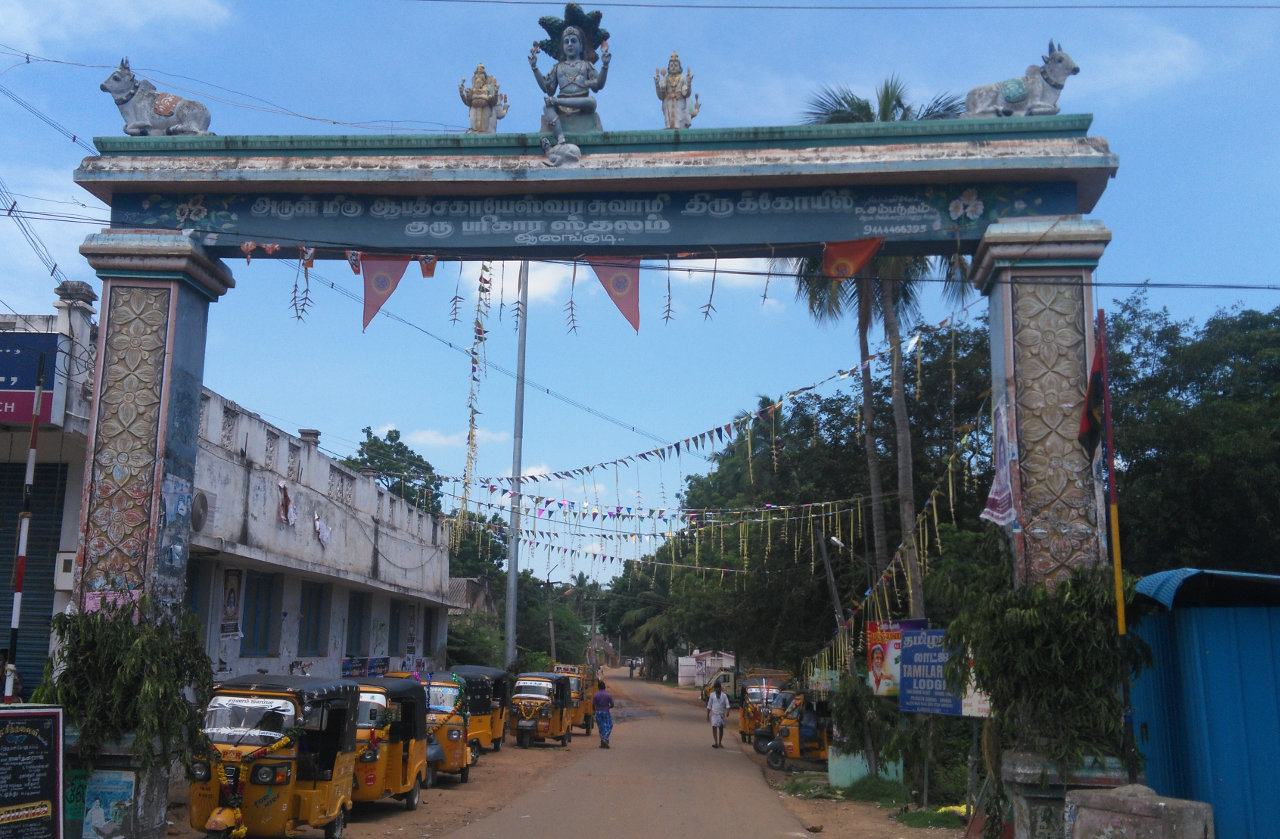 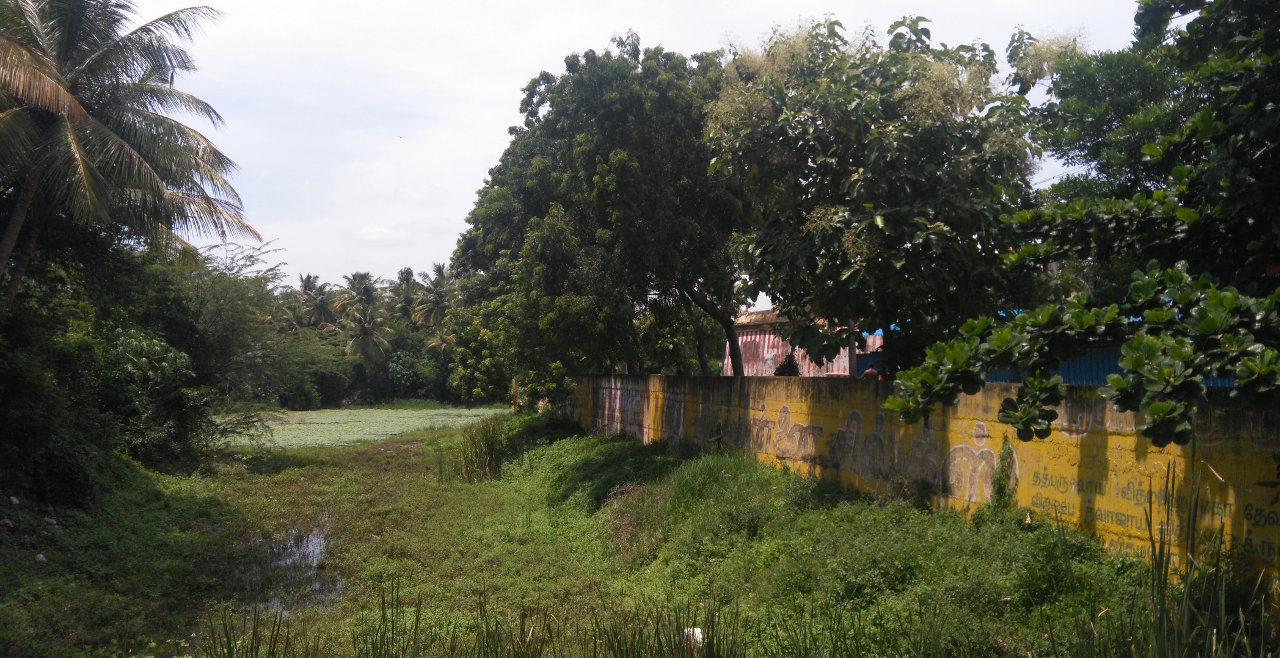 There are five Devara Paadal Petra Shiva Sthalams at different places in the Thanjavur, Kumbakonam and Thiruvarur regions which are revered as “Pancha Aranya Sthalams”. Alangudi is one among them. “Pancha” means five and “Aranyam / Vanam” means forest in Tamil. In ancient times, these regions were densely forested. These five temples are –

Worshiping the lord at these five temples in a single day is considered to be auspicious. These temples should be visited in the order given above at the following times - early morning, morning, noon, evening and night respectively. It is also believed that Saint Thirugnanasambanthar worshiped Lord Shiva at these temples in this order.

When the Devas were churning the “Thirupparkadal” to extract nectar from it, they fell under the adverse effect of the poison. It is believed that Lord Shiva, as Dakshinamoorthy, then imparted the knowledge of Vedas to the Devas to save them. The lord is also believed to have absorbed all the poison (“Alakala Visham”). Hence, he is praised as “Sri Aabathsahayeswarar” (one who protects those in trouble). The village also gets the name Alangudi.

Lord Dakshinamoorthy, also known as “Thenmuga Kadavul”, who imparted the supreme knowledge to the sages and the celestial gods, is regarded as the "Guru" (teacher). Lord Dakshinamurthy can be seen on the south facing wall of the sanctum sanctorum (“Koshtam”) of every Shiva temple.

Guru is originally seen as the preceptor of the Navagraham in the fifth place. However, in this temple, Lord Dakshinamurthy is regarded as planet Guru (Brahaspathi - Viyazhan in Tamil) which is very unique.

Lord Vinayakar here is praised as "Kalangaamal Kaatha Vinayakar”. He gets this name because when Saint Sundarar was caught in the floods while coming to Alangudi, Lord Shiva himself came to his rescue in a boat and Lord Vinayaka protected the boat from capsizing. Kalangaamal Kaatha Vinayakar can be loosely translated as “Vinayakar who protected the boat from capsizing”. 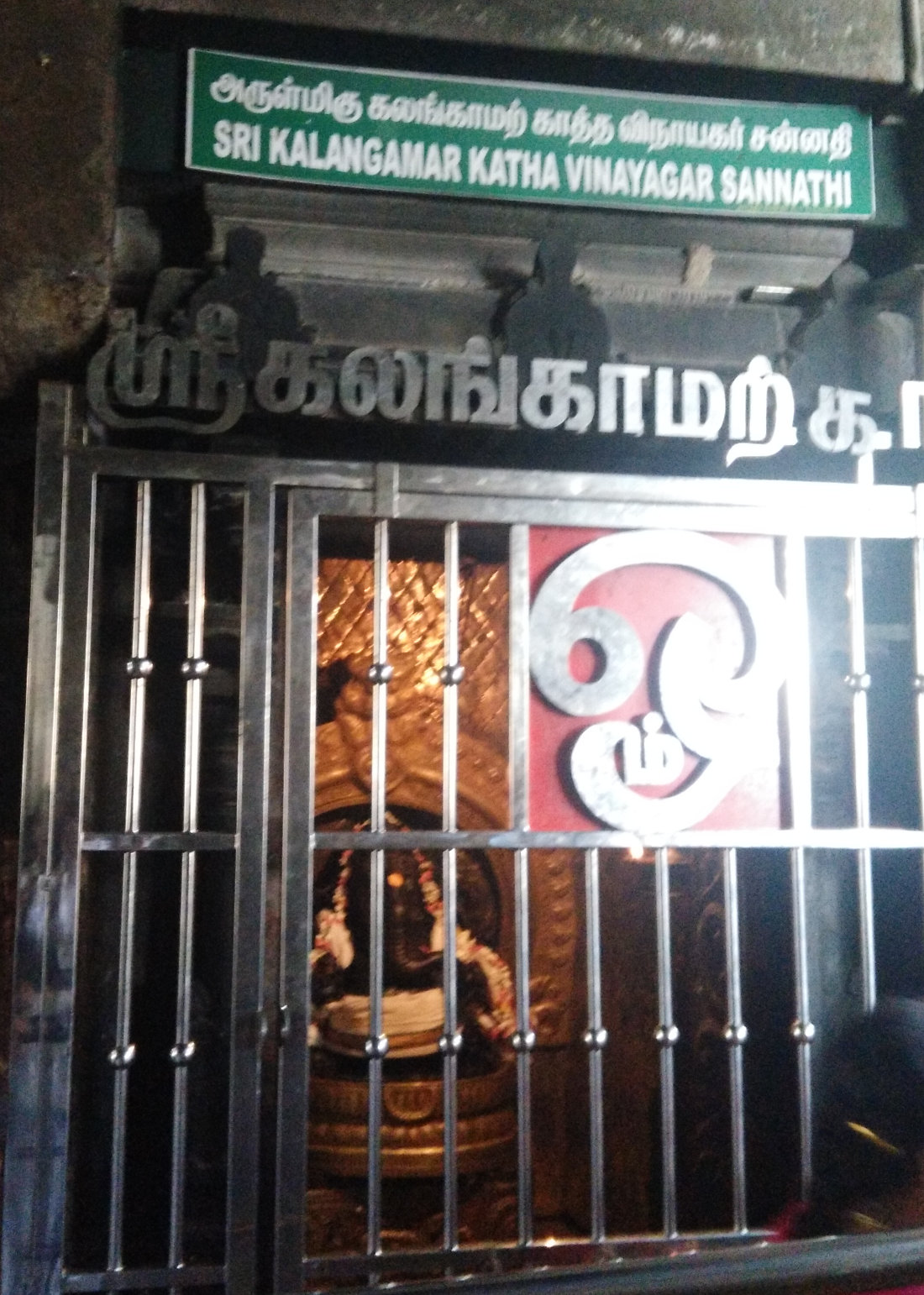 Another legend associated with this temple is that of Amuthohar, a minister of the Chola King Musukunda Chakravarthy who ruled from Thiruvarur. It is believed that this minister built this temple. The king asked him to share the benefits (“Punniyam” in Tamil) that he had accrued by building this temple. The minister refused to do so. Angered by his reply, the king ordered his guards to behead the minister. When he was beheaded, Amuthohar’s name was echoed all around. Then the king realised his mistake and worshiped the lord here to seek relief from his “Brahmahathi Dosham" that he accrued by killing his minister.

The idol of Saint Sundaramurthy Nayanar here shows scars of smallpox. The idol is small and appears to be a little bit damaged. The legend is that once this idol along with few other such idols of the saint were taken to Thiruvarur by the Chola king Easan for a celebration. The king wanted to keep the idol of Alangudi in Thiruvarur itself as he was very attracted by it. However, it is believed that, a priest brought this idol back to Alangudi. He wrapped the idol in a cloth and tricked the security guards by telling them that it was a child suffering from smallpox. Surprisingly, when the priest unfolded the idol after reaching Alangudi temple, he found that the idol had scars on it.

Goddess Mahalakshmi worshiped the lord here and was blessed with “Santhana Prapthi”.

It is believed that Goddess Parvathi had performed penance here before marrying Lord Shiva. There is a village near this temple by the name of “Thirumana Mangalam” (“Thirumanam” means wedding in Tamil). To witness the wedding, lords Mahavishnu, Brahma, Indra, Lakshmi, Ashtathik Balakas, Iyanar and Veerabathrar had visited this place. It is also believed that they have installed separate lingams here and worshiped Lord Shiva.

In the “koshtam” (place surrounding the sanctum sanctorum), idols of Vinayakar, Guru Dakshinamurthy, Lingothbavar, Brahma, Durgai and Chandikeswarar can be seen.

Lord Dakshinamoorthy’s shrine is housed outside the main sanctum. The procession idol of Dakshinamurthy graces along with four Sanakathi rishis.

There is also an idol of Dakshan, father of Goddess Parvathi, who is depicted as having the head of a goat. 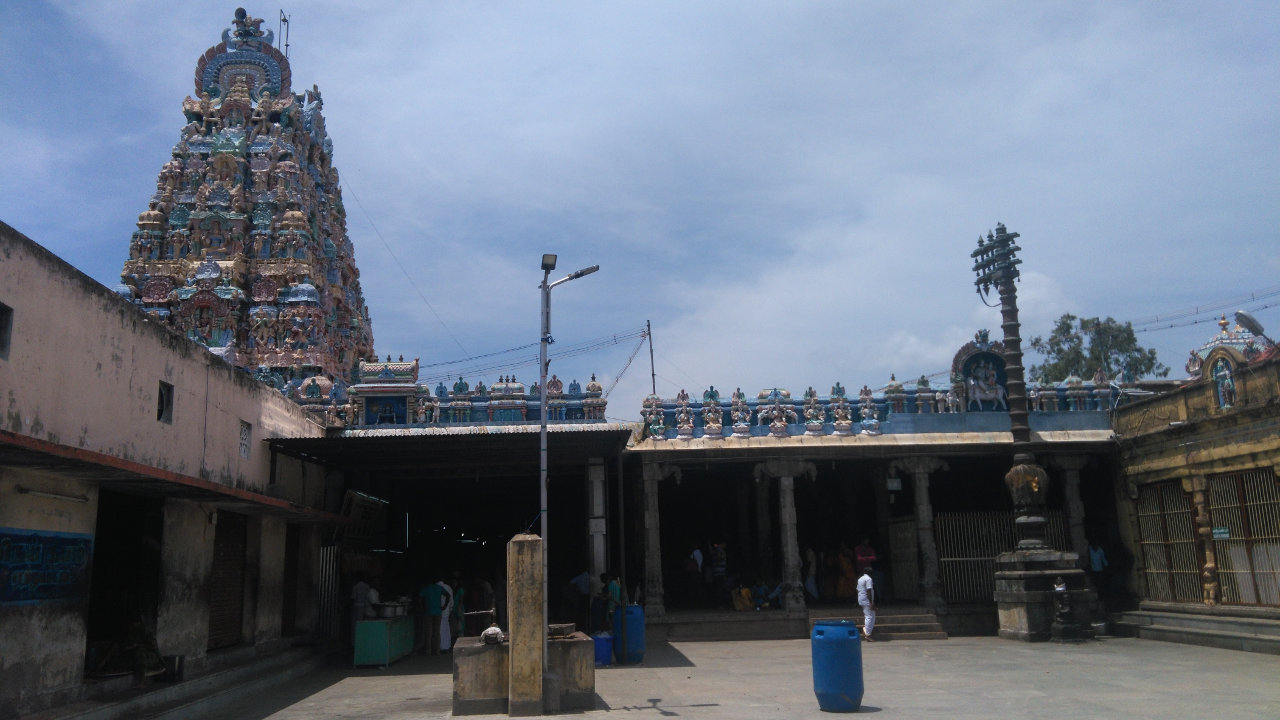 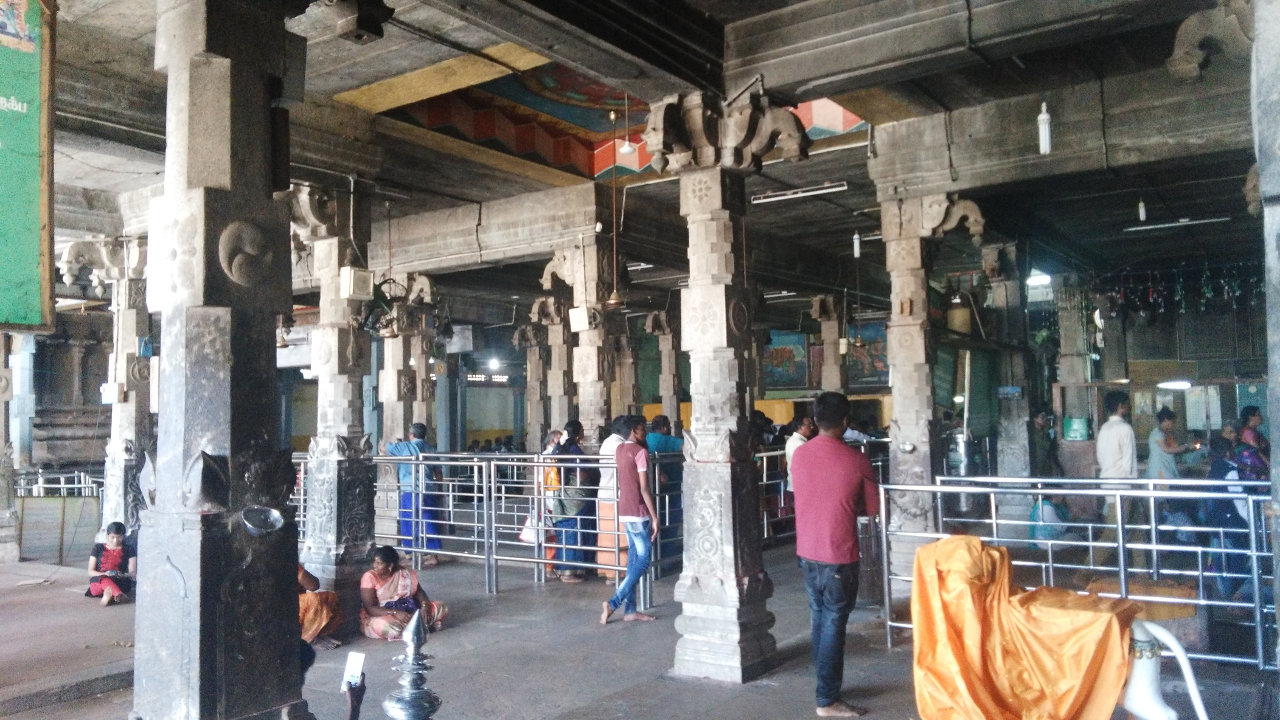 The temple attracts lakhs of devotees during the transit of Jupiter (“Guru Peyarchi” in Tamil) from one zodiac sign to another zodiac sign every year.

This is the only temple where Lord Dakshinamurthy is taken in a car procession.

Also, Thursdays are considered to be very auspicious to worship Lord Guru. Every Thursday, a large number of devotees visit this temple for worship.

Worshiping the lord here in the evening is considered to be auspicious.

There is a separate shrine here for Nagars (Serpent). Devotees perform poojas to get relief from “Naga dosham”. It is believed that in this village no one has ever died of a snake bite.

The idol of Saint Sundaramurthy Nayanar, in front of Lord Somaskandar here is very beautiful.

It is believed that Thiruvidaimaruthur Sri Mahalingaswamy temple has 9 subsidiary / associated temples (“Parivara sthalams”). Alangudi is one among them. These 9 temples are –

Worshiping Lord Dakshinamurthy on Guru Peyarchi day (transition day) is considered very auspicious. Lakhs of devotees throng this temple on this day to seek relief from all kind of “doshas”.

Some of the major festivals celebrated in this temple are -

“Guru Peyarchi” day (Transit day of planet Jupiter from one zodiac sign to the next),

Thai Poosam in the Tamil month of Thai (Jan-Feb),

Panguni Uthiram in the Tamil month of Panguni (March-April) and Car festival for Lord Dakshinamurthy. 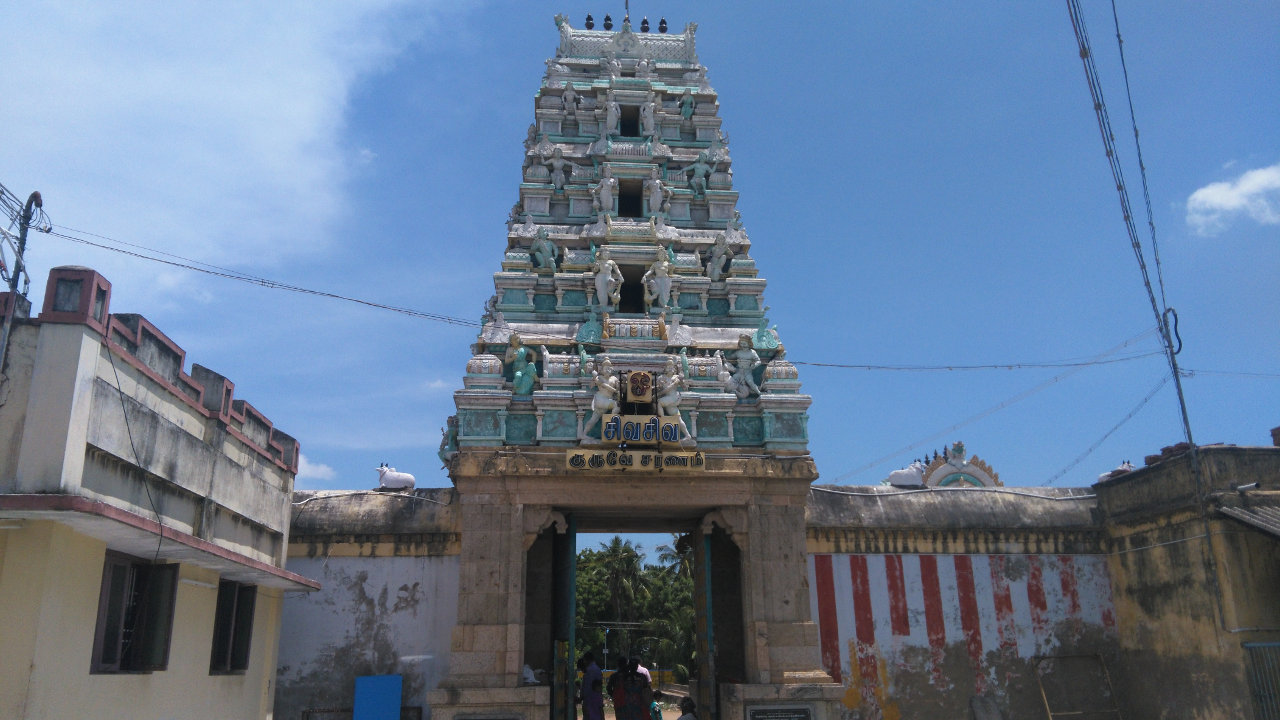 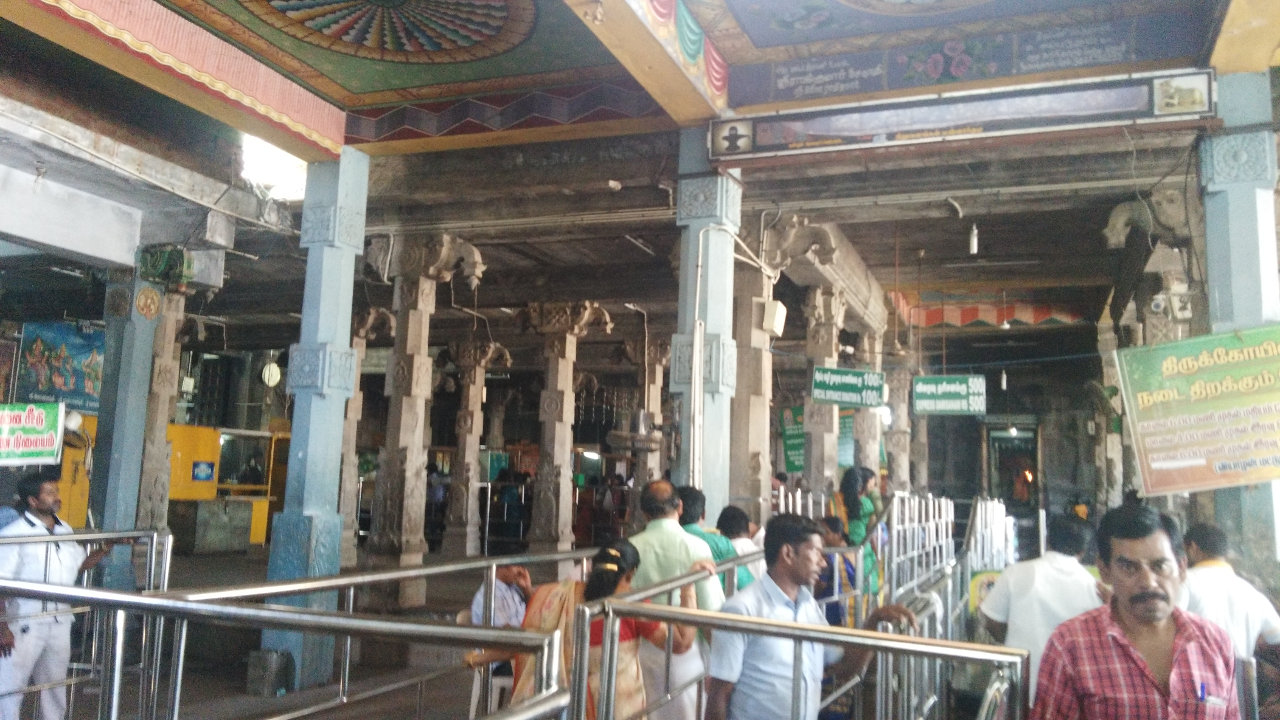 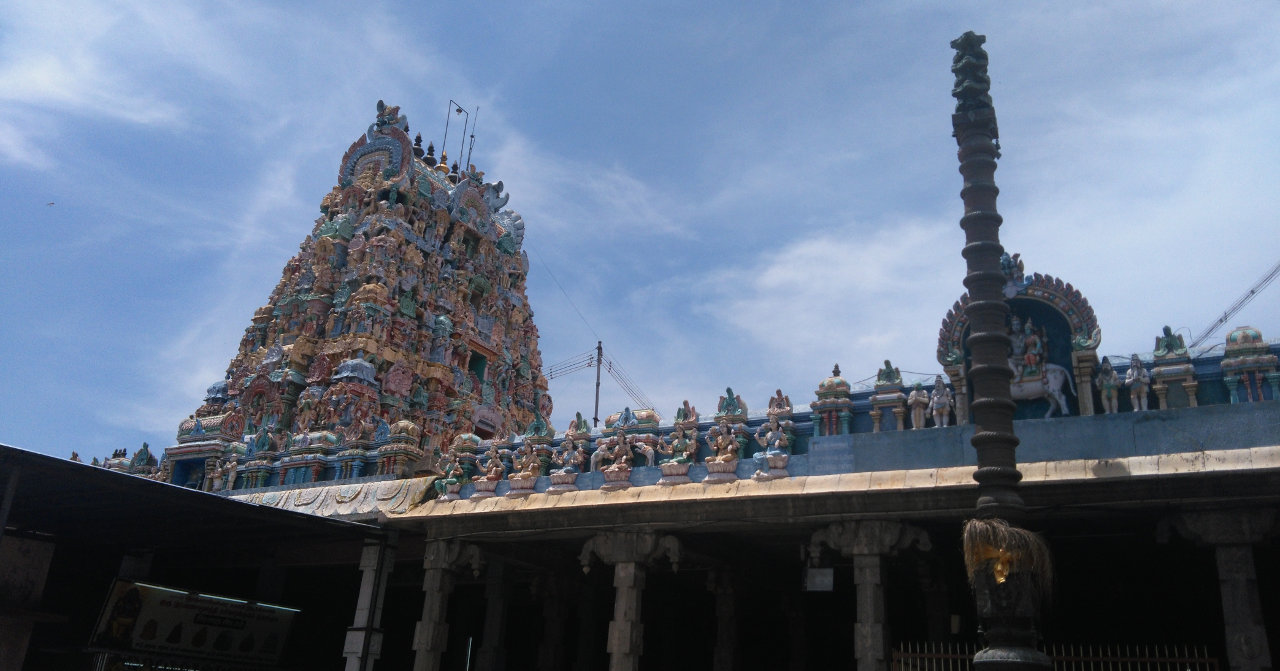